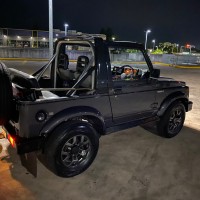 I had two Suzuki’s when I was 16. The first an LJ80 then I bought an November build 1985 SJ 50 narrow track when I was 17 in December 1986. My SJ 50 stayed in the family until 2014 when my brother sold it ��. It was still like new. 50 years old and I wanted one again but could not find one like I had then I found this one. This 1989 wide track Suzuki Sierra soft top is a One owner purchased new in Melbourne. 73100 k from new. Ordered with bull bar, hella spot lights, roll bar and tow bar. I purchased the car from the original owner in 2019. It was their holiday home car hence the low kilometres.
Once they sold the holiday home in 2014 he moved it to their main house where she then sat outside in the end starting to fade the paint on the bonnet. It required the front seats bottoms to be re done as the owner glued foam to the them. Unfortunately they could not be un glued. Paint was faded in spots so a full strip down and open door respray. Windscreen off and out. It has all the original fittings apart from the radio(I do have an original radio cassette for it now.. I restored the Badges and put new tail gate Suzuki emblem and fuel decals after the re paint. I have removed the bull bar and replaced it with the original front bar. It has factory log books, owners manual, windscreen strap, sales brochure and factory tool kit.
Next to do is a respray of the white wheels, under body re spray, it has the original serial numbers on the springs so they will be re applied. Lots of fun. 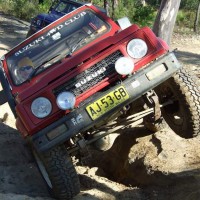 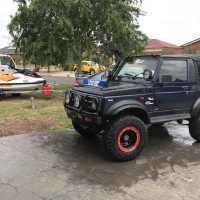