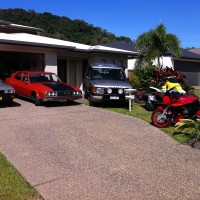 I first picked the car up as parts for another Sigma the girlfriend had. But when I found out what it actually was, it turned out the other way around. It was in a pretty bad state mechanically. That was back in 1992 and I've had it ever since. It's just finished its 3rd resto and now it looks brand new.

2.6L engine instead of the original 2L. Power Steer (an absolute must) Later model borg warner gearbox and a MSD ignition with Boost retard. Other than that pretty stock.