As a young fella about 11-12 years old, I saw a car that was black and chrome, the car mesmerized me and I asked my stepfather "what is that" he replied it was a Shelby Cobra.
I swore to myself that one day I would own one of those.
As I learnt more about the car and became a mechanic, then worked through different jobs all in the effort to make a wage that would allow me to buy and build my dream.
Eventually my wife and I made the move to Alice Springs, and I have no shame in admitting that moves number one reason was as it would be the one that put my wages into the arena that I could save and buy a kit.
2004 I payed my deposit and ordered my kit, and it was delivered on a pallet in November that year.
The following years was all building, saving, assembling.
Until finally in September 2008 I towed the car to Wakefield and raced at the Cobra Nationals.
Then pulled the car apart in preperation for engineering and full rego.
This was achieved on my birthday in February 2010.
Mid 2010 I drove the car from Alice Springs to Innisfail in North Queensland.

Kit car, so everything is modified. 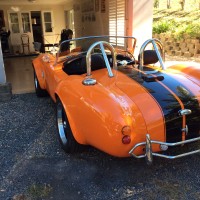