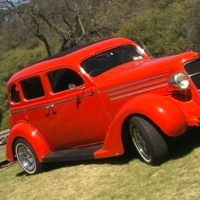 Car purchased in February 2011, virtually as-is from Ken Mitten who has since built a Full Fendered '31 Improved A Ford Coupe. The car has been to the Geelong Street Rod Nationals in 2011 and is going on the Rich River Rod Run in March 2012.

The car has a 265 Hemi six, backed by a Borg Warner three speed auto trans. This is coupled to a ~2.73:1 Valiant diff. The front end is Mitsubishi L300 independent with disk brakes. The Wheels are Cragar Street Pro 390's with thin-line white wall tyres.

The interior is from a Toyota Cressida. The car is on SR (Street Rod) plates. It is a dream to drive. It starts, goes and stops well. It looks the part and is a lot of fun.

It has Speed sensitive, centrally boosted four zone air-conditioning (Cowl vent and four windows) but the seats are comfortable and it rides well. 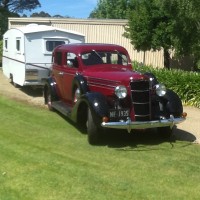