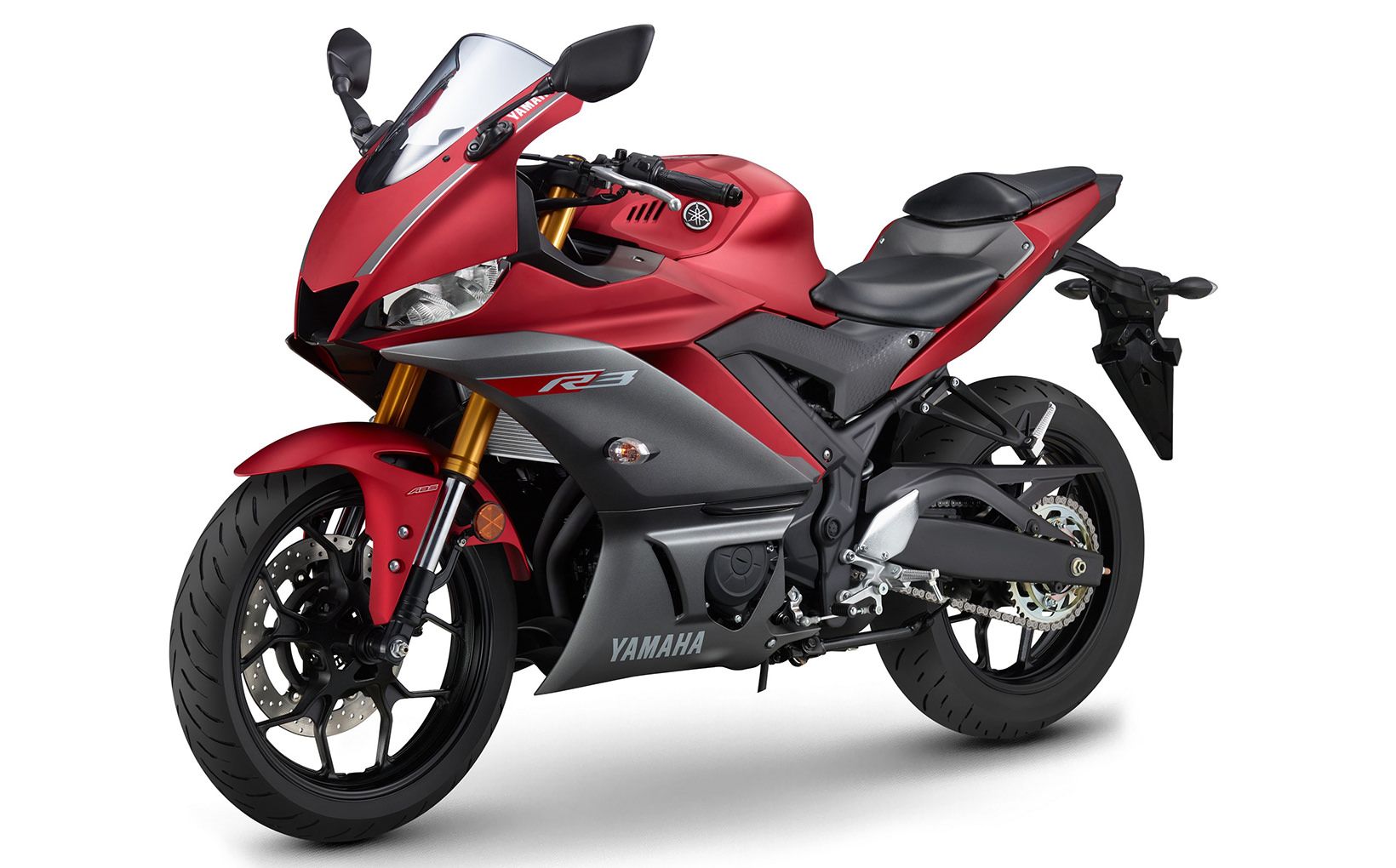 Yamaha Motor Australia (YMA) has subtly updated its R3 lightweight supersport as it hits local showrooms with refreshed styling, improved ergonomics and enhanced corner stability, courtesy of an all-new suspension setup. According to a spokesperson from YMA, the brand is confident these changes will help the bike take the reigns as segment sales leader from Kawasaki’s Ninja 400, which topped the charts last year.

Available in three colours — Yamaha Blue, Power Black and Candy Satin Red — the bike is on sale now at $6299 plus on-road costs, and comes with a 24-month/unlimited kilometre warranty. That pricepoint is unchanged from before, making it the second least-expensive model in the category behind the Honda CBR300RR, which checks in at $5999.

YMA projects that 45 per cent of the bike’s customers will be made up by male learner riders, while 30 per cent will be riders looking for a daily commuter, 15 per cent returning riders, and 10 per cent female riders. The most notable update to the R3 is the styling, as the 300-class Yammy is put in-line with its bigger siblings — the R6 and R1 — with more modern design cues and improved aerodynamics. 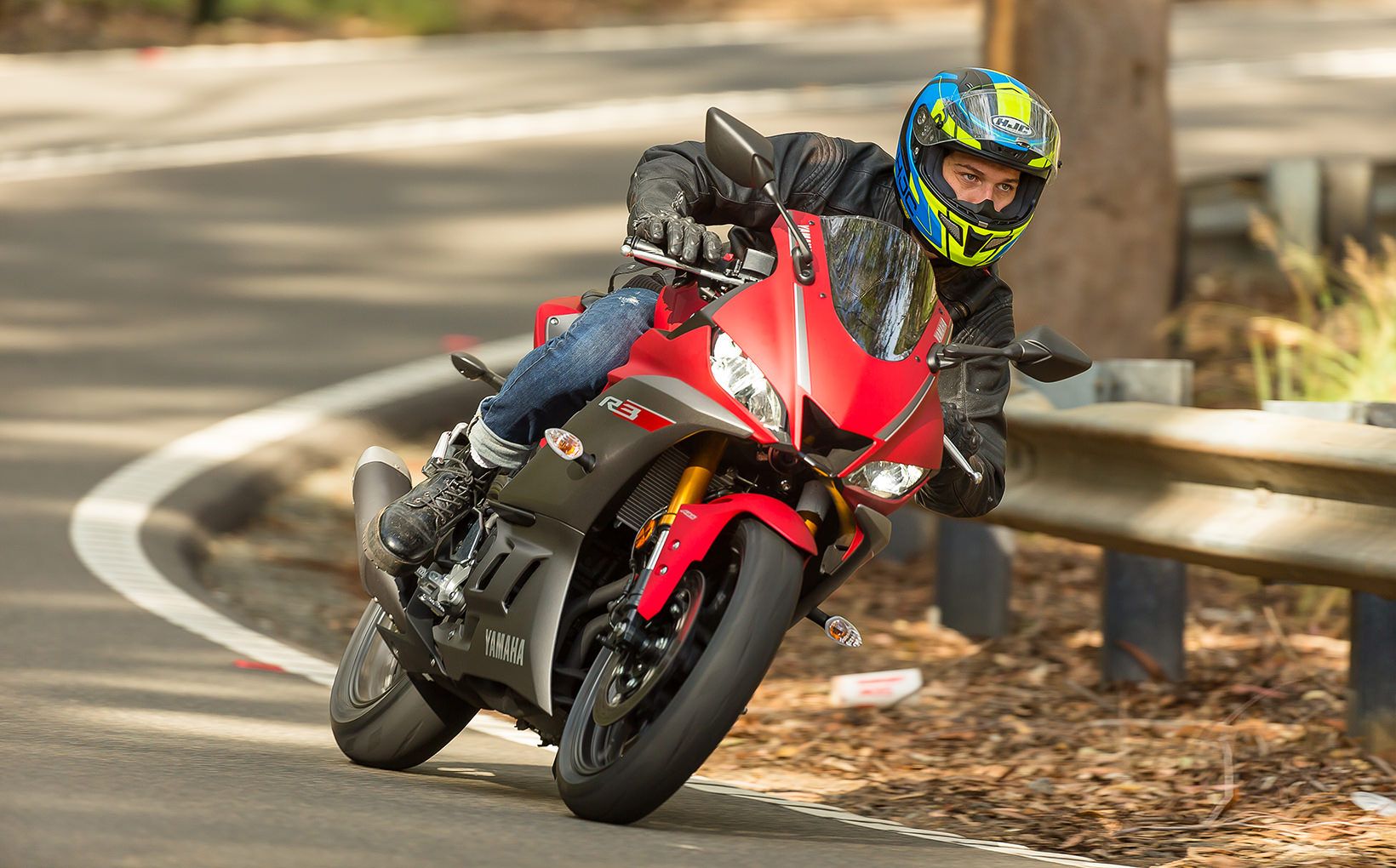 Answering complaints about the previous iteration, the new R3 features a reshaped fuel tank and lower handlebars to allow for a sportier riding position. Buyers will also benefit from a new 37mm inverted front fork setup and monocross rear shock for sharper handling, as well as a multi-function LCD instrument panel to replace the outgoing analogue dial.

Earlier this year, Yamaha invited Australian Road Rider to the local launch of the new YZF-R3 in Sydney, giving us a chance to trial the range both on the road, and on track. We were already big fans of the model since it first landed in 2015, but if it wants to steal the crown from the venerable Kawasaki Ninja 400, it has to be special.

The road portion of the Australian Yamaha YZF-R3 media launch was held in Sydney’s Blue Mountains —
a long tarmac loop to get to grips with the refreshed sportster. Climbing on for the first time and the ergonomic changes are clear. Yamaha has lowered the handlebars by 22mm, and while it’s not as dramatic as a modern litre bike, the body position feels aggressive and suited to fast riding.

This will surely be welcomed by most, however the trade-off, of course, is that the stance begins to wear on your body faster than before as it forces more weight onto your wrists and upper body. For short trips it’s comfortable enough, however if you’re looking to munch miles, we’d advise looking elsewhere, perhaps
in the 650cc LAMS segment.

In day-to-day running, the carry-over 321cc liquid-cooled parallel twin is impressively capable, delivering approximately 31kW at 10,750rpm, and 30Nm at 9000rpm. Power is sent through a fairly standard six-speed gearbox. Nothing special, but no complaints there.

Other than just looking cool, the new KYB upside-down forks (130mm travel) make the bike much more planted, and we could confidently push through corners at pace. However, the sharper front-end makes the rear KYB monoshock (45mm travel) feel overly plush, and particularly floaty on exit. Fortunately,
some adjustment is available for rear preload.

With the addition of the new front fairing, Yamaha has developed a “YZF-R1-inspired” dual LED headlight system, though we did not ride the bike at night to test its functionality. Braking power is strong from the floating twin-piston calliper squeezing a 298mm disc at the front, while the rear is noticeably weak, making do with just a single-piston, 220mm-disc setup. 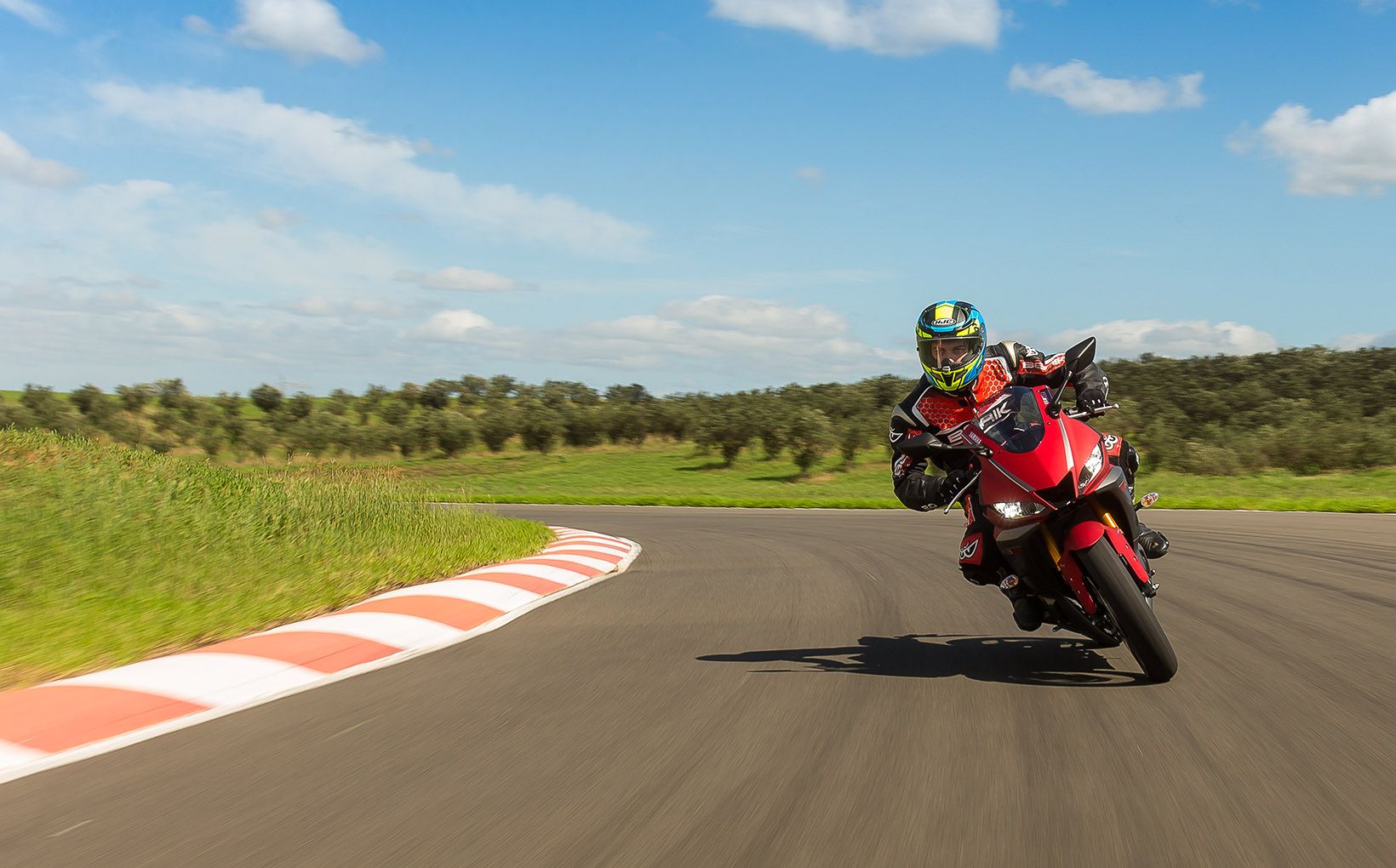 The majority of R3 buyers will no doubt stick to the road, however the bike has had a strong presence on the racetrack since it launched, as a popular toy for weekend warriors, and for riders in the single-make YMF R3 Cup championship.

We spent a day at Luddenham Raceway to trial the enhanced lightweight, unencumbered by pesky traffic laws. Yamaha developed the new fairings in wind tunnels to decrease aerodynamic drag by nine per cent, and to enable decreased air turbulence around the rider’s helmet when in a tucked position. According to Yamaha, this has translated to an increase of up to 8km/h of top speed. That was far too technical to test by the seat of our pants, but we found we could get under the paint much easier than on the previous iteration thanks to
the lowered handlebars and reshaped tank. 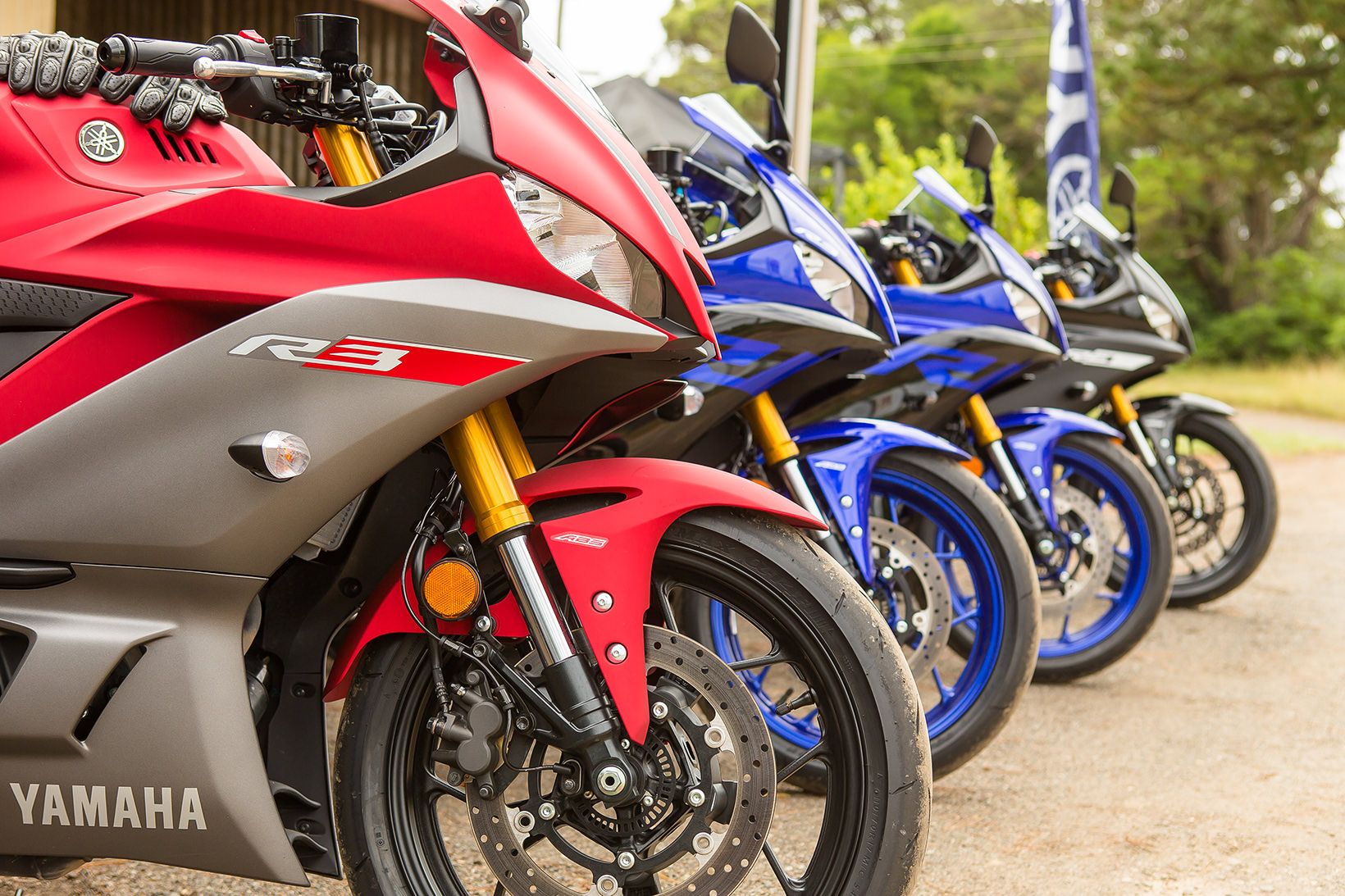 The bike was a pleasure to throw around the tight and hilly bends of Luddenham Raceway, and the standard Dunlop Sportmax GP300 tyres provided respectable levels of grip.

It is surprising just how strong the performance is from the small-capacity engine, and the narrow design and 167kg wet-weight allows the bike to carry tremendous corner speed. In more capable hands, the bike was just seconds shy of the circuit’s 49.40s lap record. Okay, a second is a long time in racing speak, but you get the picture. 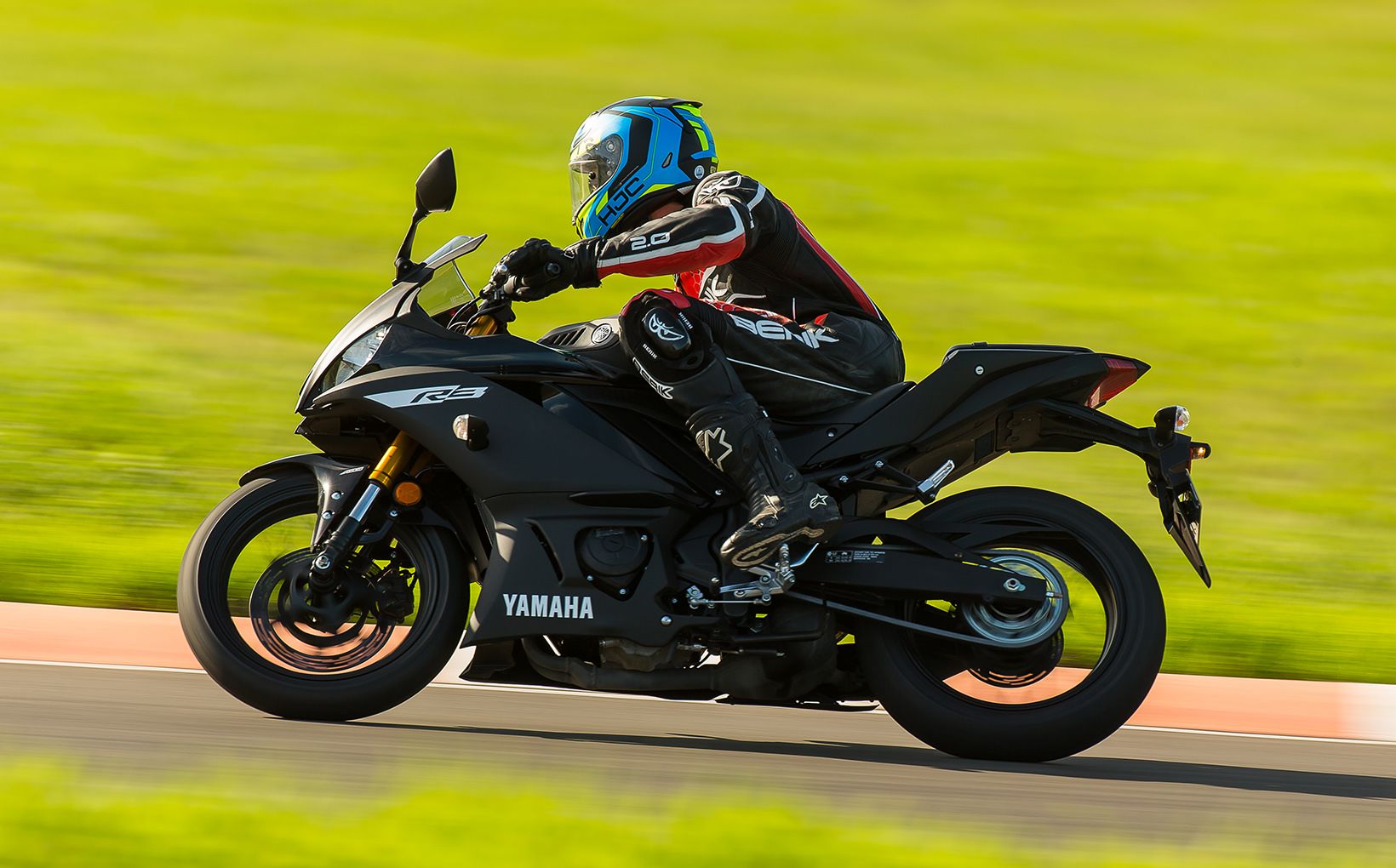 Like all models in the sub-500cc segment, the Yamaha YZF-R3 is built to a pricepoint, and that can be observed in the fit-and-finish and level of standard equipment. However, the bike represents strong value, and with a few minor updates to improve both the looks and handling, it is a strong contender in the lightweight sportsbike shootout. Will it out-sell the Ninja 400? That remains to be seen, but it is clear that the updated Yammy is fit to go toe-to-toe in the next sales year. Watch this space. aRr

As with all models in Yamaha R-Series, the YZF-R3 can be fitted with a number of factory accessories including titanium exhausts, slip-on mufflers, billet covers, protectors and more. According to YMA, the range of parts and accessories will continue to grow.