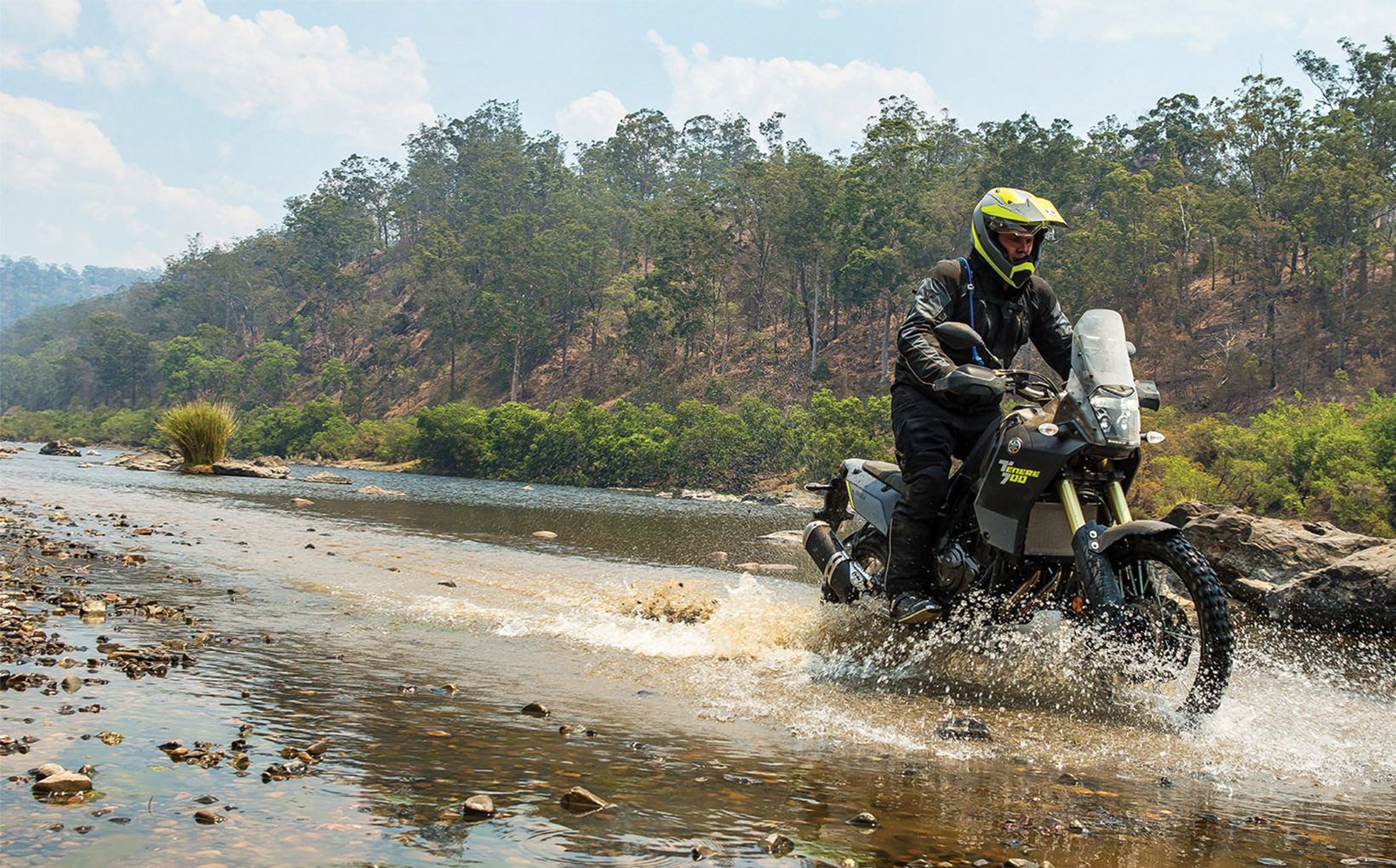 Three years ago, almost to the day, Yamaha unveiled the T7 Concept at the EICMA motorcycle show. It dropped jaws of adventure riders the world over, all who have since been made to wait for it, but the Ténéré 700 is finally here.

Said to be developed in Italy by the same group of Yamaha personnel that designs the firm’s Dakar bikes, it’s easy to see the DNA. The silhouette of the 700 is hugely reminiscent of Australian Dakar racer Rod Faggotter’s WR450RR Rally bike.

It’s immediately apparent that it won’t take anyone long to get their head around the new bike; there are no stocking fillers here, just a raw, simple and, as it turns out, capable motorcycle. No engine modes, no cruise control, no TFT dash, not even a basic traction control system, an ‘if it doesn’t need it, it doesn’t have it’ approach. 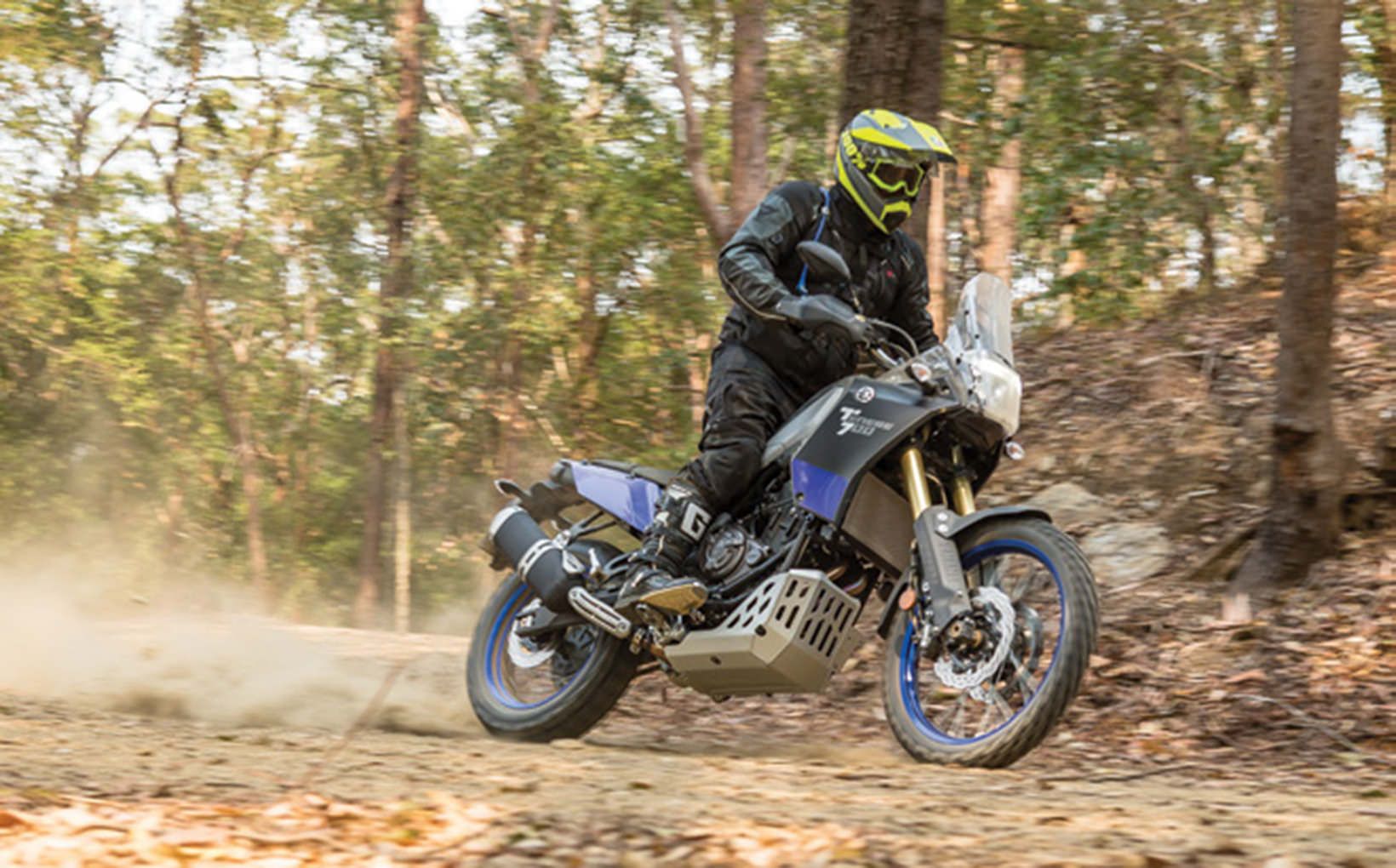 The Tenere is basic and predictable, you’ll be sliding around on the thing in no time.

But whether that attitude is enough in a time when even KTM’s little 390 Adventure can boast a lean-angle sensitive traction control system is still yet to be seen.

It doesn’t take long to feel comfortable on the Ténéré; less than one hour into the ride, we are cutting laps on a beach in pretty deep sand. There is no way you would find me pedalling

a 1200cc-plus adventure bike through sand as deep as this; it’s situations like this that the new Yamaha’s capacity and lighter weight makes good sense.

When you sling a leg over the bike you are met with a minimalistic rally-style layout. The dash sits up high above the headlight and the small windscreen protects you from the elements. Yamaha has included provisions for a GPS unit to be attached above the dash in clear view, as well as a 12v outlet to power it, and the tapered motocross-style ’bar feels wide and spacious. 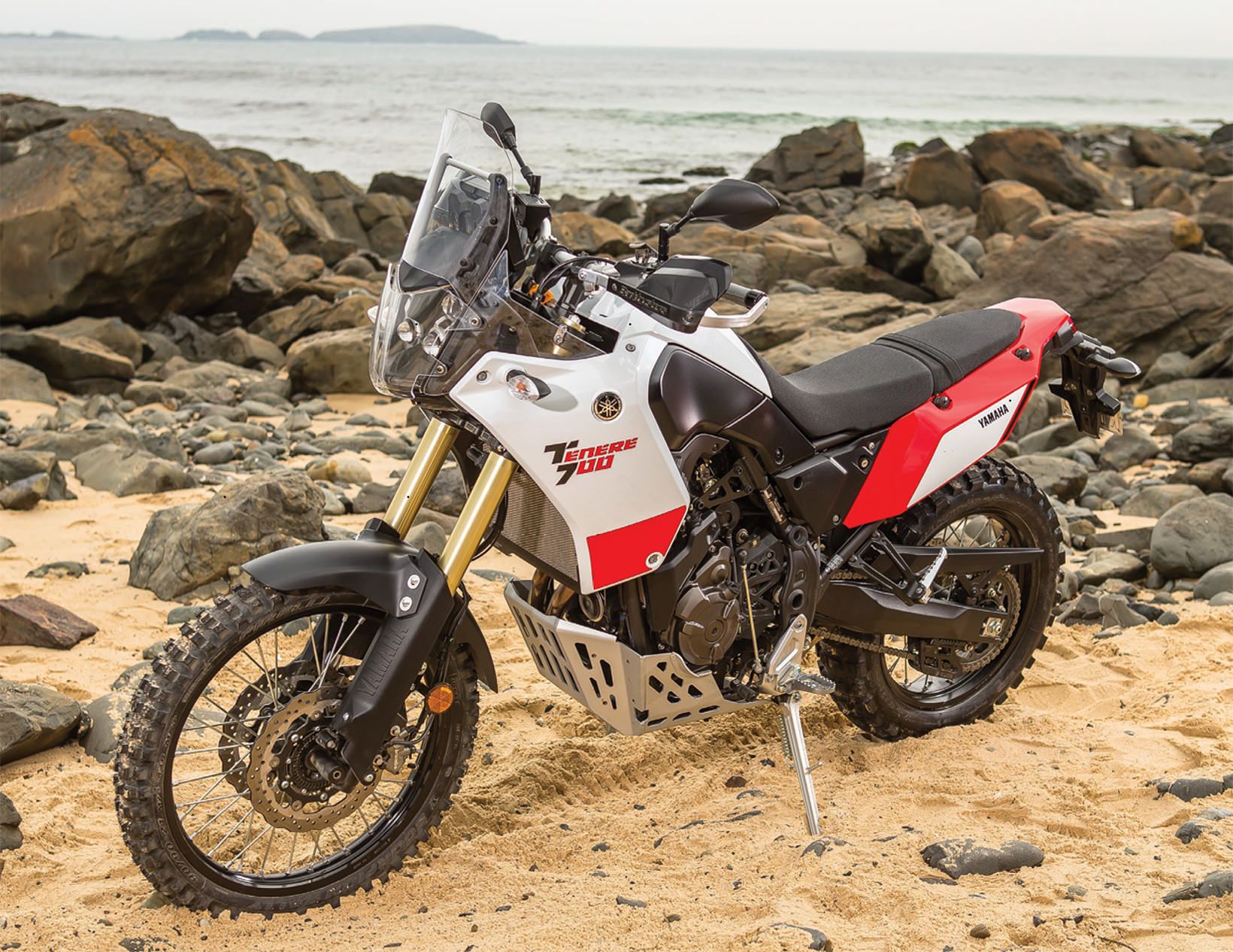 The bike’s very few bells and whistle means the switchgear is minimal – just the very basic required functions. The off-road specific ABS is switchable from the main dash – but only while you’re stationary. I would rather it be done on the fly, but once on the dirt I found there wasn’t really any reason to turn it off. You can gently slide the rear end into corners without it getting upset and the front ABS is still there if panic sets in. Plastic hand protectors are standard fitment also, but could be vulnerable in the bush.

The stock seat, at 880mm, is relatively high for a so-called mid-capacity machine, though once rolling, is okay. It’s not a struggle to turn around on a fire trail or stop on uneven surfaces. If you’re after a lower option for confidence sake, there are accessory options to lower the seat and rear suspension further again, or a taller and flatter rally seat for the taller riders among us. 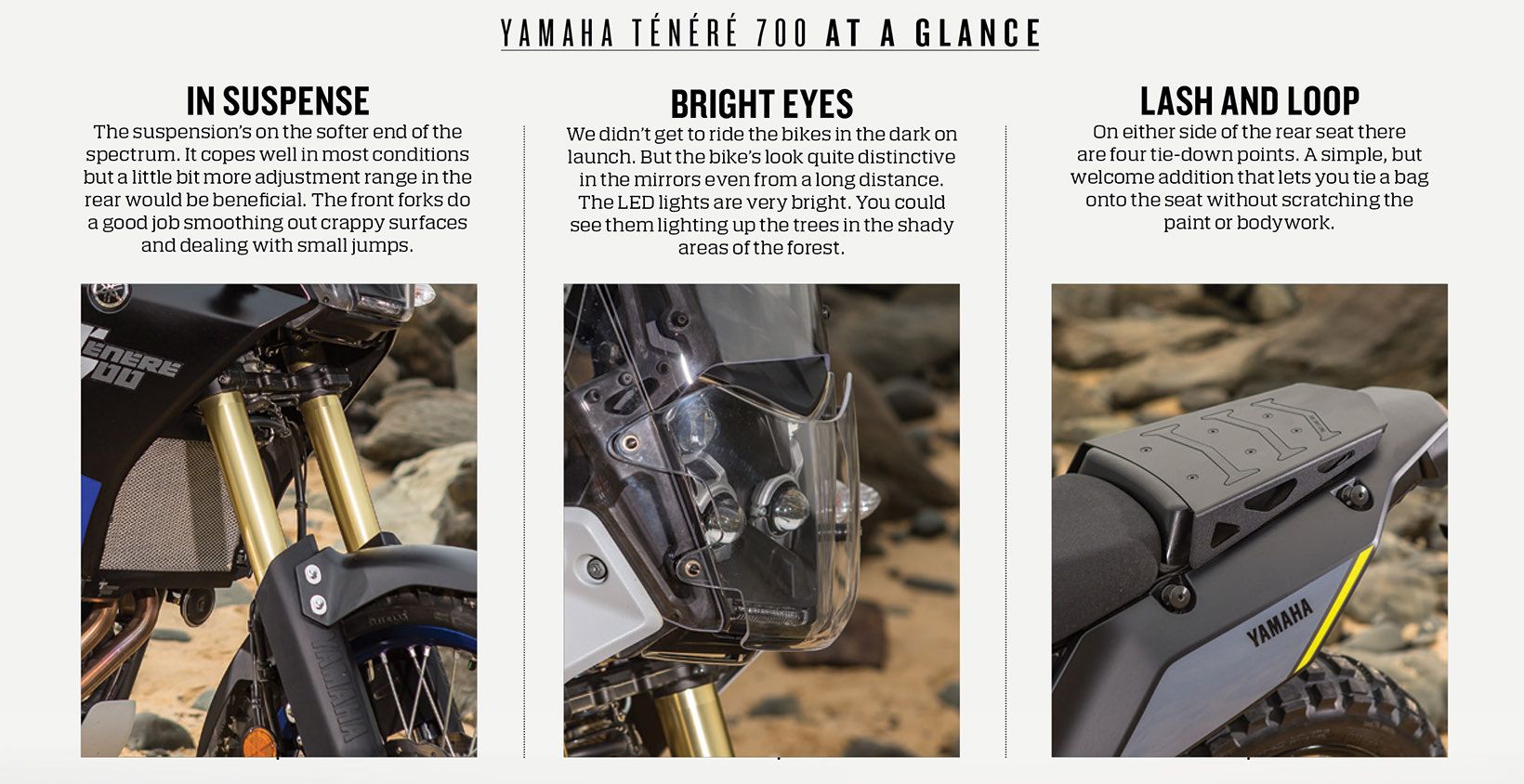 The heart and soul of any bike is its engine, and this one is lifted directly from the firm’s MT-07 range. The 689cc crossplane parallel-twin is versatile and reliable and a really clever choice for this application. Minor changes have been made compared to the standard roadbike – less changes keep the costs down; ECU tuning, cooling system, exhaust system, shorter final drive and air intake changes, while the original gearing remains.

On paper, the performance figures of 54kW (72hp) and 68Nm are pretty underwhelming

but, as Yamaha was quick to point out, the output is “enough”. The throttle response is direct and power is delivered in a smooth and predictable manner. Riding the bottom to mid-range torque is intuitive and predictable, you get a real understanding for the amount of traction available and you can modulate the throttle to suit the varying road surfaces (there’s no traction control, remember). 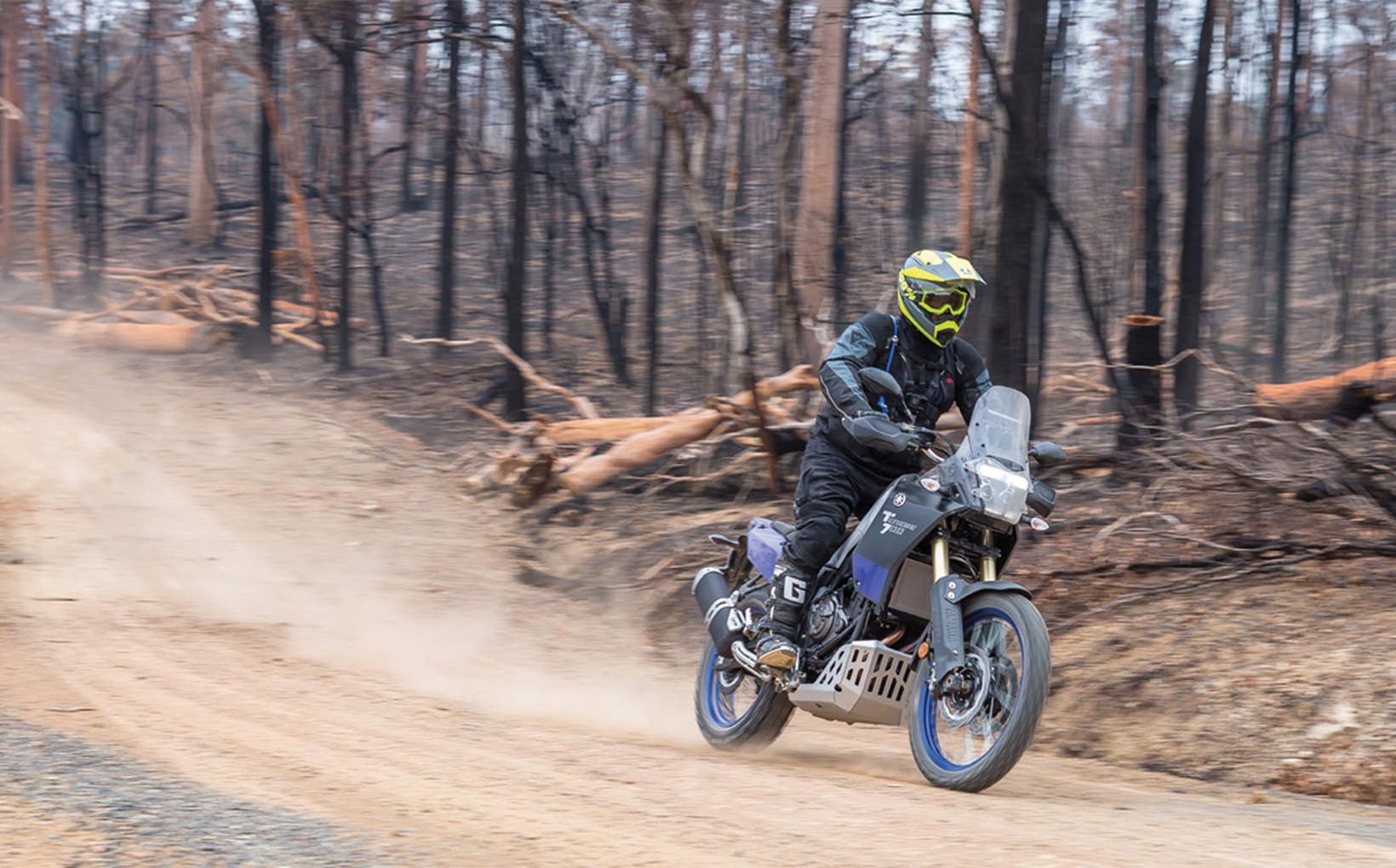 The other benefit is you can hang the rear end out on the dirt with ease if that’s your thing and the Ténéré loves it! The engine is happy to trundle through 50km/h zones in top gear or rev out to its 9500rpm redline if you get excited. I overheard a fellow rider mention that he saw 180km/h on the speedo at one point. So the shorter road gearing doesn’t hinder its top-speed capabilities.

There is more than enough power on the dirt roads, but when you hit the bitumen its hard to deny the desire for more power, and you can’t help but think the addition of switchable mapping could have helped in this regard. Lofting the front wheel to show off to the local school kids is a clutch-up second-gear affair and on the ire trails if you need to lift the front wheel over a cattle grid or tree branch, you need to be in third gear as a maximum. 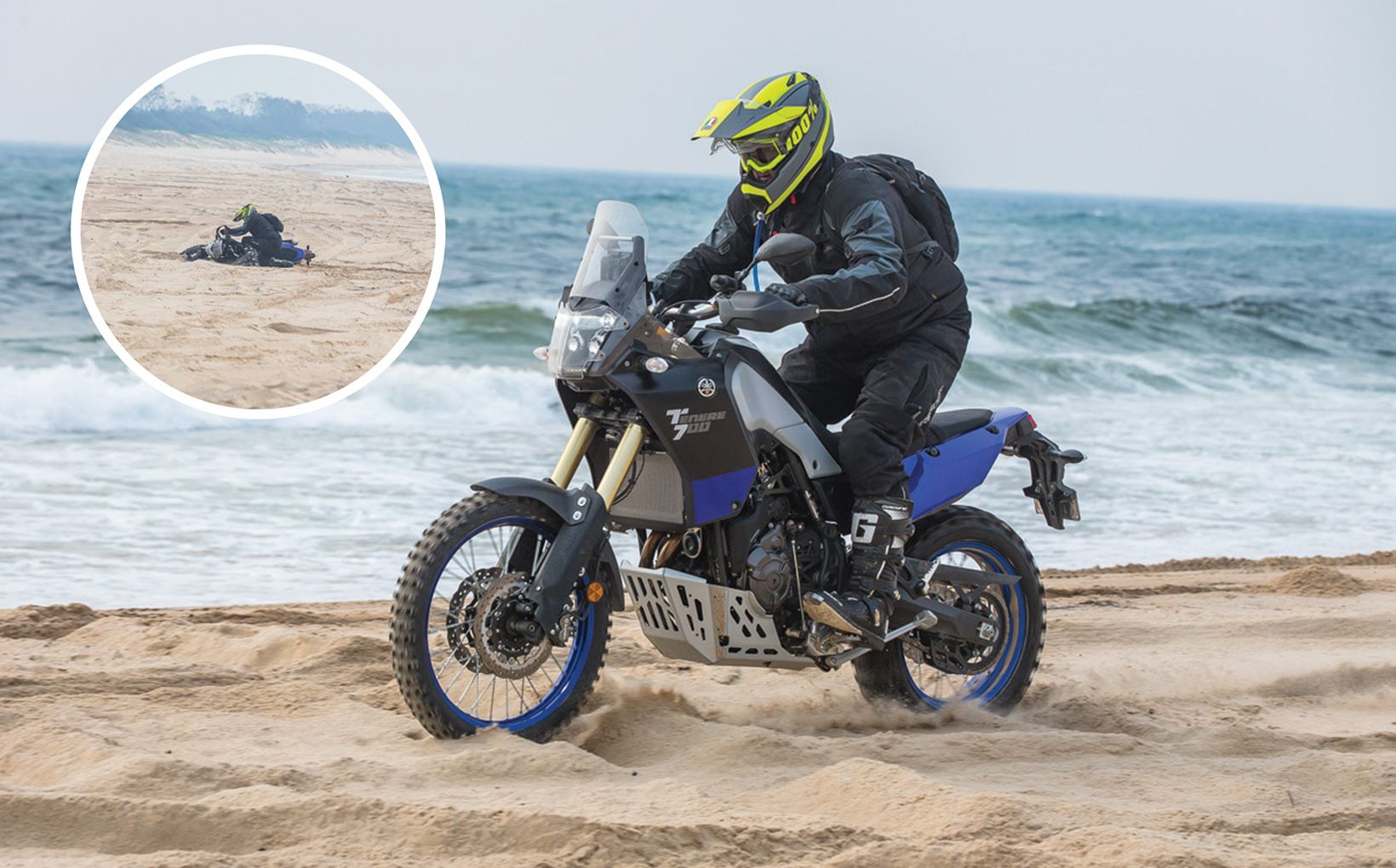 A gentle thrump emits from the standard steel muffler as you tootle along at legal speeds and there’s enough note to never really need to look at the tacho. Some of the test bikes were fitted with the optional Akrapovic slip-on muffler but, if I’m honest, I could hardly pick the difference in either engine note or performance. The optional muffler really only improves aesthetics while also reducing a bit of weight.

The slim tubular-steel frame was designed from scratch for this model, achieving a bike which feels light and nimble between your knees. There is still the MT’s trait of the clutch cover interfering with your right leg while sitting in a standard road-riding stance, but quickly forgotten about when you start drifting from one corner to the next in the dirt. 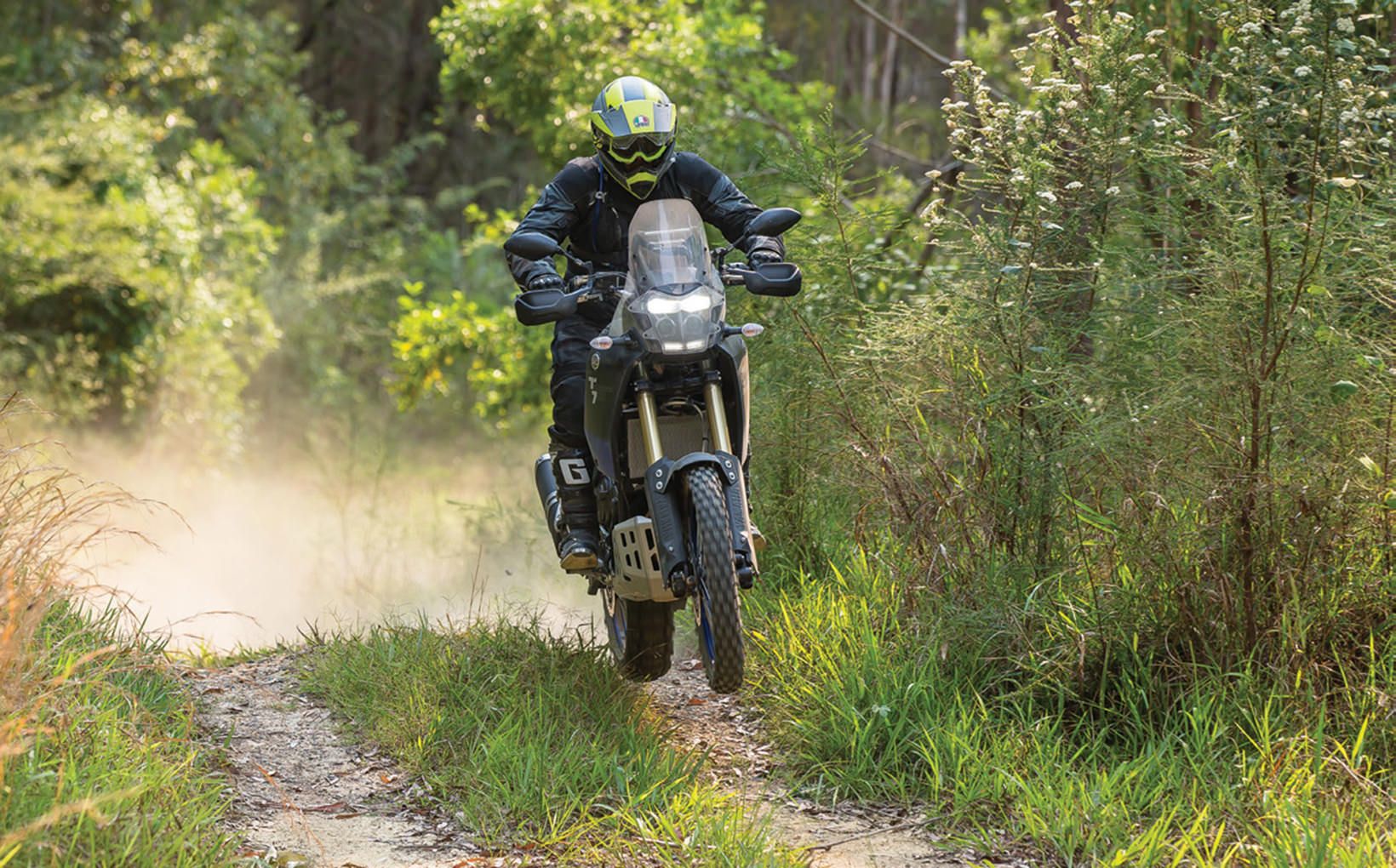 The Ténéré feels closer to a WR450 enduro bike than a 1200cc Super Ténéré adventure tourer with it’s long suspension and 21/18-inch wheels. It’s definitely aimed at the rider seeking adventure off the bitumen, thanks the KYB suspension, which appears to be directly related to those found on the firm’s enduro range. The handling is very light, a bit twitchy at high speed, but you need to suffer a little stability for the faultless off-road handling and rapid turn in. After all, according to Yamaha, the bike has been designed for 80 percent dirt riding and 20 percent road use.

The suspension is on the softer side, making light work of corrugations and crappy surfaces, though it struggled at times on some serious corrugations exiting low-speed corners hard on the gas. A bit more damping could be dialled in to help in these situations. I tip the scales at a little over 100kg, so I needed to wind five or six clicks of preload on the rear for some more support.

You can bottom the suspension out quite easily if you are careless over jumps and cattle grids, too. I found it best to power over them and land rear-wheel first on the power. If you get too much air and land flat, the bike will bottom out. Our route had us traversing dirt roads, fire trails and 4WD-only tracks. There were small log hops, a bit of sand, erosion jumps and even climbing an embankment to get around a locked gate and the Ténéré never felt like it was out of its comfort zone. 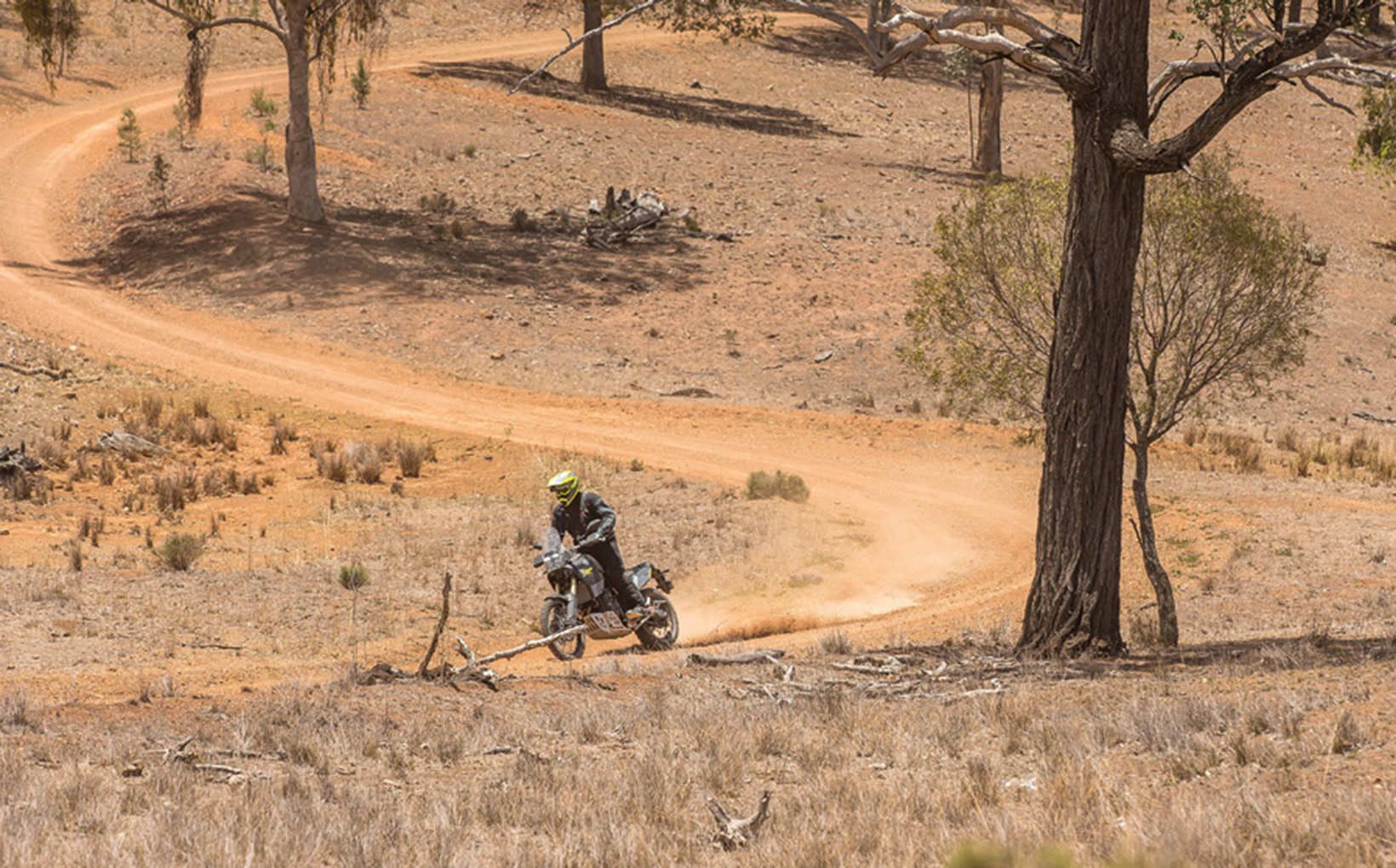 Cruising at 110km/h on the open road sees the tacho around the 5000rpm and wind protection from the compact screen is exceptional. Perhaps too good, in the hotter temps I had to stand up occasionally to get fresh air into my jacket vents. The dash is a simple LCD unit that is easy to read offering up all the standard info; tacho, a couple of trip meters, fuel gauge, range and consumption, as well as ambient air temperature.

On one stint I covered 260km and the bike took 12L of fuel. It was far from an economy run, with plenty of dirt roads and some high-speed road sections linking it together. On those numbers, it’s fair to assume the 16-litre tank will see you travel over 350km if you are cruising.

And the Ténéré is pretty happy to cruise. There are better touring bikes out there, granted – ones that have cruise control, comfortable seats and 17-inch wheels – but there is an unmistakable feeling of freedom while on the Ténéré. A feeling that you could skip work and take a dodgy back-road to a remote pub for lunch. Then if time got away from you, it would be happy to skip back home via the freeway in time for dinner.

There is something about riding a motorcycle in its purest form. Not getting distracted or lost in a gaggle of electronic settings. Being able to back it into a corner before getting on the gas early and sliding it out. Linking up the corners one at a time not having to think twice about when this or that is going to cut in and spoil the party. The Ténéré just feels so natural. 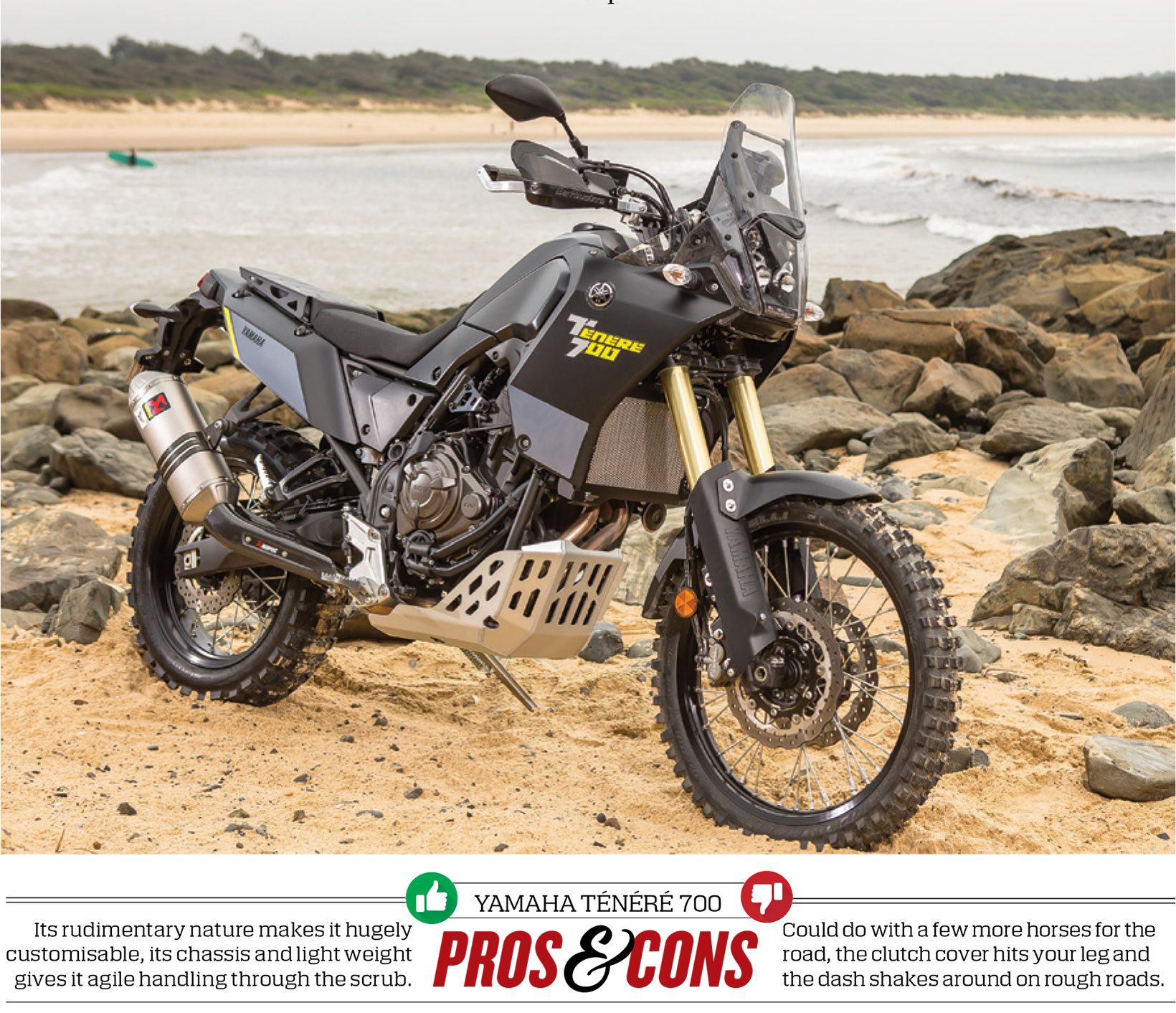 The launch bikes were fitted with Pirelli Scorpion Rally tyres, which were superb. They were perfectly suited to the majority of off-road riding on the launch. I could predict when the front would lose grip and the grip from the rear was amazing. I wouldn’t recommend them for daily city riding or commuting, the thrumming off the rear tyre on the bitumen became pretty annoying quickly. Though the feeling and grip on the bitumen was good – not footpeg-scraping good, but okay, and if you grabbed a handful of the front brake you could hear the front tyre protesting.

The Brembo front and rear brakes are strong, there’s plenty of feel and power if you needed to get aggressive. At 204kg wet, the Ténéré probably doesn’t need anything higher-spec than the twin-disc dual-piston caliper front set-up. The smaller, 282mm discs help keep the brakes protected from mud, water and rocks while still offering enough bite.

Crash protection is always a concern on off-road machines. Yamaha has ensured the critical parts of the roadbike-based engine are out of harm’s way. The steel chassis rails that run down the front of the engine at either side are not load bearing and are there to keep the engine protected. The standard under-engine protection keeps the oil filter, sump and exhaust from getting damaged by rocks. There is also a genuine heavy duty bash plate as well as crash bars available for those seeking extra protection.

The Ténéré hits the Australian market at $17,149 (ride away). Compare that to KTM’s 790 Adventure – both parallel-twins – which can boast a similar weight and suspension travel, but its $4K price premium buys you 15 more horsepower, four more litres of fuel capacity, a full-colour TFT dash and the full gamut of electronic bells and whistles.

There are more hard-core off-road focused machines like KTM’s 690 Enduro R and Husqvarna’s 701 Enduro; they’re competitive on both price and power outputs but are lighter than the Ténéré by almost 30kg. But, compared to the new 700, they lack wind protection, fuel range, pillion capability and comfort.

One can’t help but wonder, given what Yamaha’s now knows about the explosion

of the mid-capacity adventure segment as we head into the 2020s, if in hindsight it would have gone down the same less-is-more development path when it set out to create the Ténéré 700 all those years ago.

Either way, there’s no denying the Ténéré 700 has brought a fresh, bare-bones approach to the Adventure touring segment. There are no distractions, nothing fancy, it’s just you and the road or track you point it at.

Which ultimately, is adventure riding in its purest form.