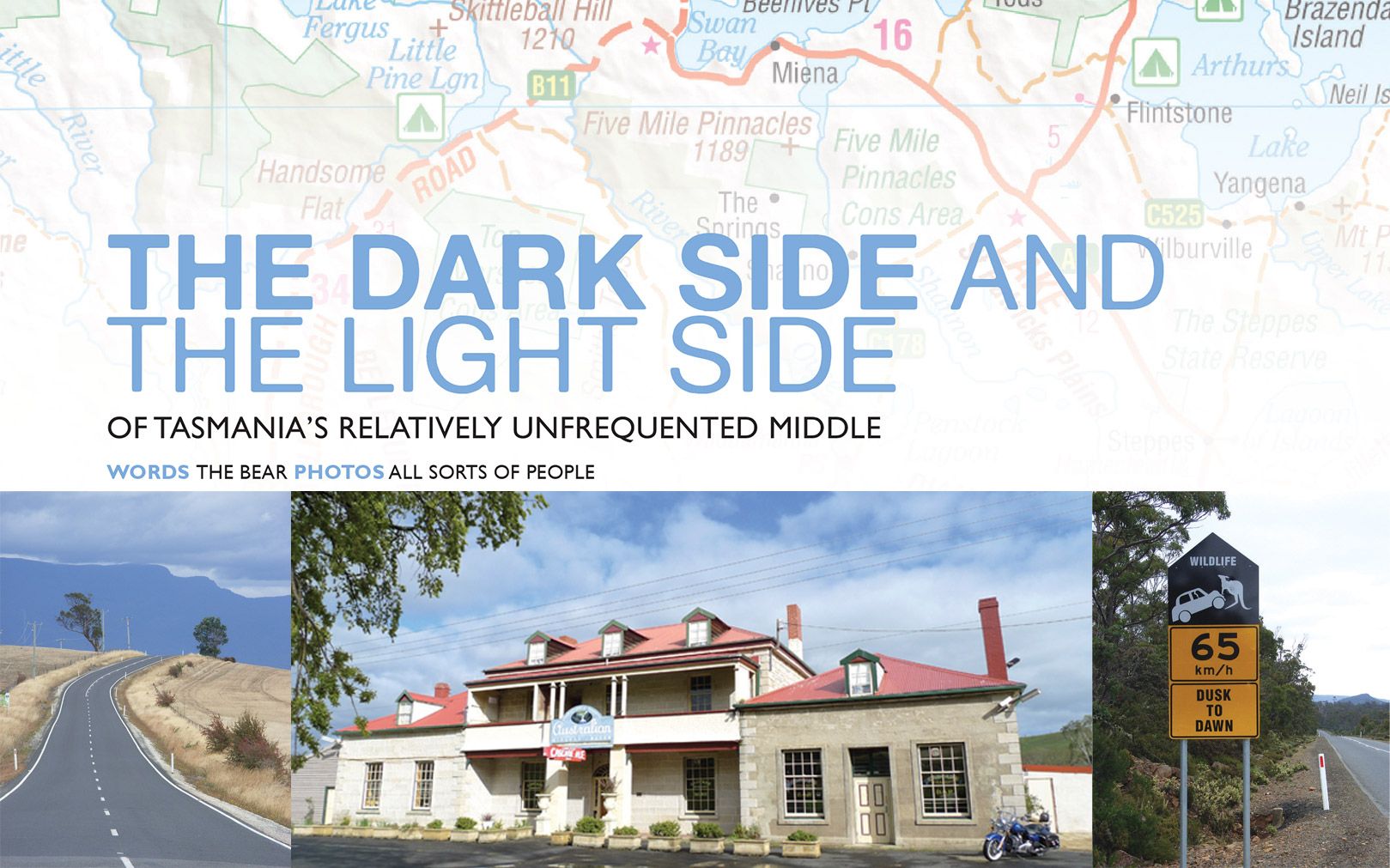 Two very similar roads this month – on paper. In reality, while the countryside they traverse is similar as well, their demands are quite different. Both the green and the red routes first – from the north – the cultivated coastal farming belt, then the great hills of the Tiers and finally the flat highland plain with tis endless-seeming paddocks, fi sh-rich lakes and native forests. The main warning I would give to anyone on the red route, however, would be to beware of wildlife on the road and the huge and delicious vanilla slices at the Bothwell bakery; on the green route it’s the weather, which can turn the gravel-and-earth surface rather unpleasantly slippery.

Be that as it may, either road is worth riding and between them they offer two ways of riding the roads that everyone else uses on Tassie visits. Maybe the ideal thing would be to follow either or both of these roads on your second visit to Tassie!

A pretty place by the Meander Rider, Deloraine has now been bypassed by the main road. It’s still worth a stop, if only for a breather and a coffee at one of the cafés on the main road. If you’re collecting Big Things, the Big Tasmanian Devil is off to the west a few kilometres on the way to Mole Creek. In town there are several art galleries, good for souvenir shopping.

It looks as if it’s caught in a time warp that has kept it back in the ‘60s, but Poatina is a nice little town that started life as a company town for the Hydroelectric Commission (the Hydro), and has never outgrown that role. Probably its most notable feature is the road on which it lies and to which it has given its name. The Poatina Esses, climbing the Western Tiers, is among Tasmania’s best bike roads.

Not so much a town as a fishing camp for the Great Lake, Miena’s main attraction is the pub. The Great Lakes Hotel has accommodation and most other services, is friendly and – let’s face it – the only game in town and for at least 50km around. Call them on 03 6259 8163 before setting out if you’re concerned about the weather. The name of the town is pronounced “my-enna”. I don’t fish, but I like sitting in the warmth of the bar when typically Tasmanian weather is raging outside. It does get really cold up here, and the surrounding roads may be cut by heavy snowfalls. A bit over 30km south, on another gravel road, is the Waddamana Power Museum. This shows a history of hydroelectric power in Tassie, and is housed in the first power station built by the Hydro.

If the hydroelectric museum near Miena isn’t enough for you, Bothwell has a golf museum commemorating the fact that Australia’s first golf course was built here in 1837. It is still in use. There are lots of historic buildings and craft shops, and the town celebrates its Scots heritage with road signs and much else. As for me, I like the bakery.

The other towns you will encounter on the way are all pleasant enough and offer full services. Hamilton is a little off the main road but nice enough; Longford has historic buildings and the Tom Roberts Gallery which sells books and prints; Cressy is memorable (for me) only for the fact that I was once served a fish in the pub which still had ice in the middle because the “chef” had not put it into the microwave for long enough. The beer’s okay. 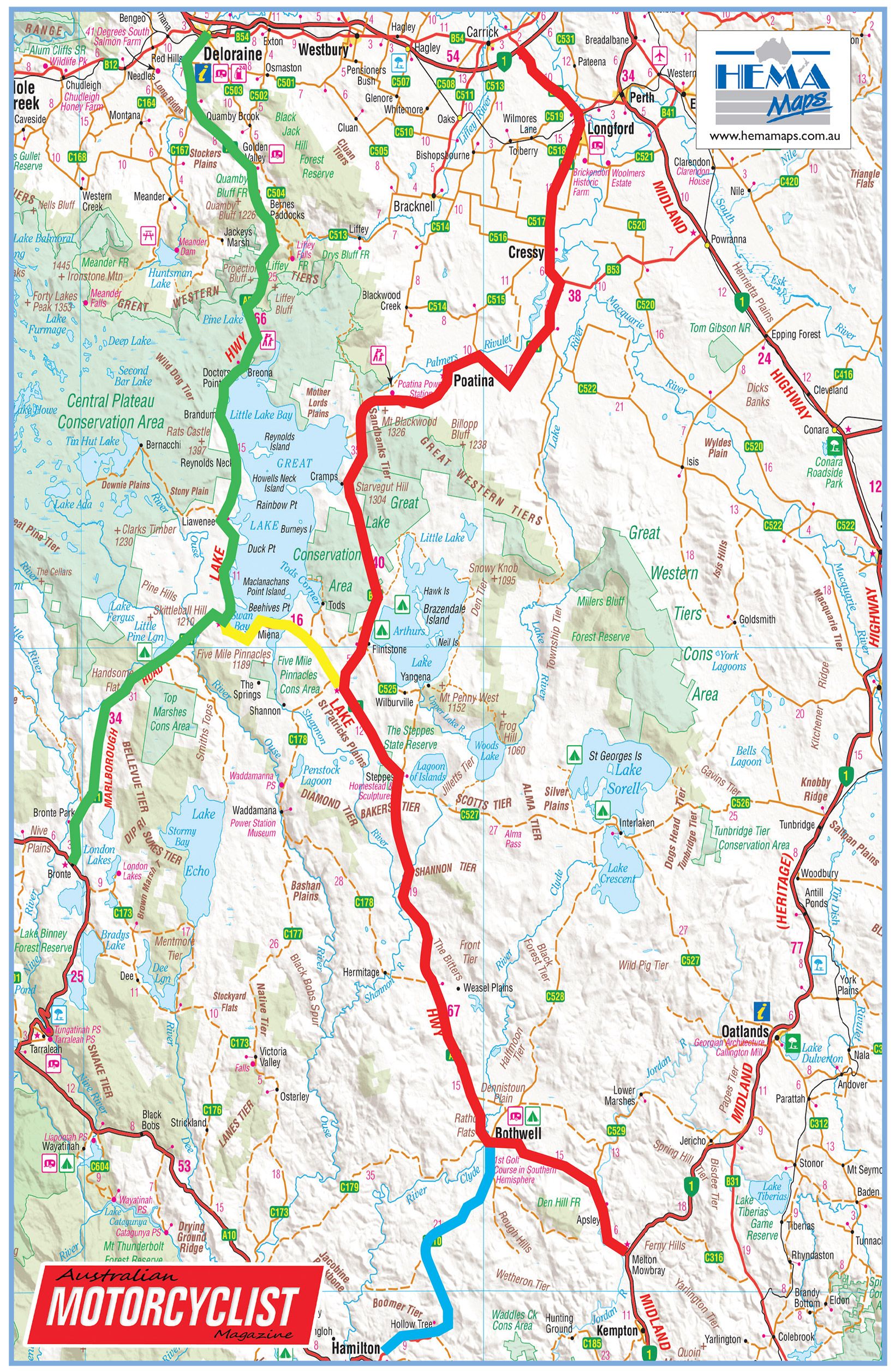 We have long battled the idea that the way to “do” Tassie was to simply ride around the island. You get to see a lot, true, but you also miss a lot! Here are two ways to travel from north to south or south to north which avoid both the A3/A10 combination that takes you around Tasmania, and Highway 1 through the centre.

There is, however, a trick – the surface. One of these routes is all sealed; the other is partly unsealed. Which one you take depends on what kind of riding you like to do. Just as a guide, though, we have ridden both of the unsealed sections of the Marlborough Road and the Lake Highway on road bikes, and we had no problems. It might be different after rain, though…

You are most likely to arrive on the ferry, so let’s take it from the north. After you roll off the boat, turn south and then make a left turn onto Highway 1. Follow that past Deloraine and Carrick until you get to the turnoff to Longford on the B52. Ride through Longford and continue on the B52 to Cressy. About 5km past Cressy you will come to a T intersection. On the map it looks as if the road continues south and the stem of the T goes east; in fact it looks different on the ground, and the road seems to continue east.

The road to the east is the B53, and it takes you over to the Midland Highway. Although it is a pretty run, you don’t want it. Ignore it and turn south, staying on the B52. You will find yourself riding towards the Great Western Tiers, an impressive range of hills at right angles to the road. Even before you start climbing them on the terrific “Poatina Esses” it’s a wonderful run, and it just gets better. At the top you will be warned about wildlife; take that seriously, there is plenty of it going by the roadkill. You will be riding on a mostly excellent road which runs past places like  Cramps and Starvegut Hill… The road runs between big lakes here, but you don’t see much of them unless you take one of the stub roads that lead directly to a lake.

At the junction with the Lake Highway, turn left. A dozen or so kilometres down the road you will see a sign to the right pointing out the Circle of Life sculptures. Stop and take a look, they are attractive and quite unusual. It’s a pretty straightforward run south from here to Bothwell, where you continue on the Lake Highway through Apsley until; you reach the Midland Highway at Melton Mowbray, not far from Hobart.

Rats, I’m running out of space. Let’s be a little briefer. The green route is good if you’re coming from the West Coast and want to take the shortest route north to Devonport and the ferry, or even Launceston airport. The turnoff to the Marlborough Road is marked near Bronte on the Lyell Highway, the A10. There is a bit of tar to just beyond the holiday resort type place called Bronte Park, and then you’re on the gravel to just past Skittleball Hill where the road joins the Lake Highway.

The gravel section of that road starts pretty much straight away, but it isn’t really long and you soon find yourself back on the tar near Reynolds Neck. The hill off to your left is Rats Castle; don’t they have terrific names in Tassie?

From here you cross the Western Tiers on a tight but terrific road and follow what amounts to a pretty country lane to Deloraine, and Highway 1 near Devonport.

Like the blue route, this is just a connector. It joins the red and green routes by way of Miena, which consists of a pub called the Great Lake Hotel. Last time I stopped there it was run by motorcyclists, and I would imagine it is still friendly. This connection is useful if you’ve come up the green route from Bronte and want to get to Launceston or you’re just riding a loop down from the north and don’t mind a bit of gravel. The graded gravel roads are generally pretty good, actually.

Another connector, this time from Hamilton on the Lyell Highway to Bothwell. The road is called the Hollow Tree Road and offers some attractive scenery and a sealed connection to the Lake Highway at Bothwell. It’s also an alternative to taking the highway from Melton Mowbray if you’ve been exploring the Derwent Valley.