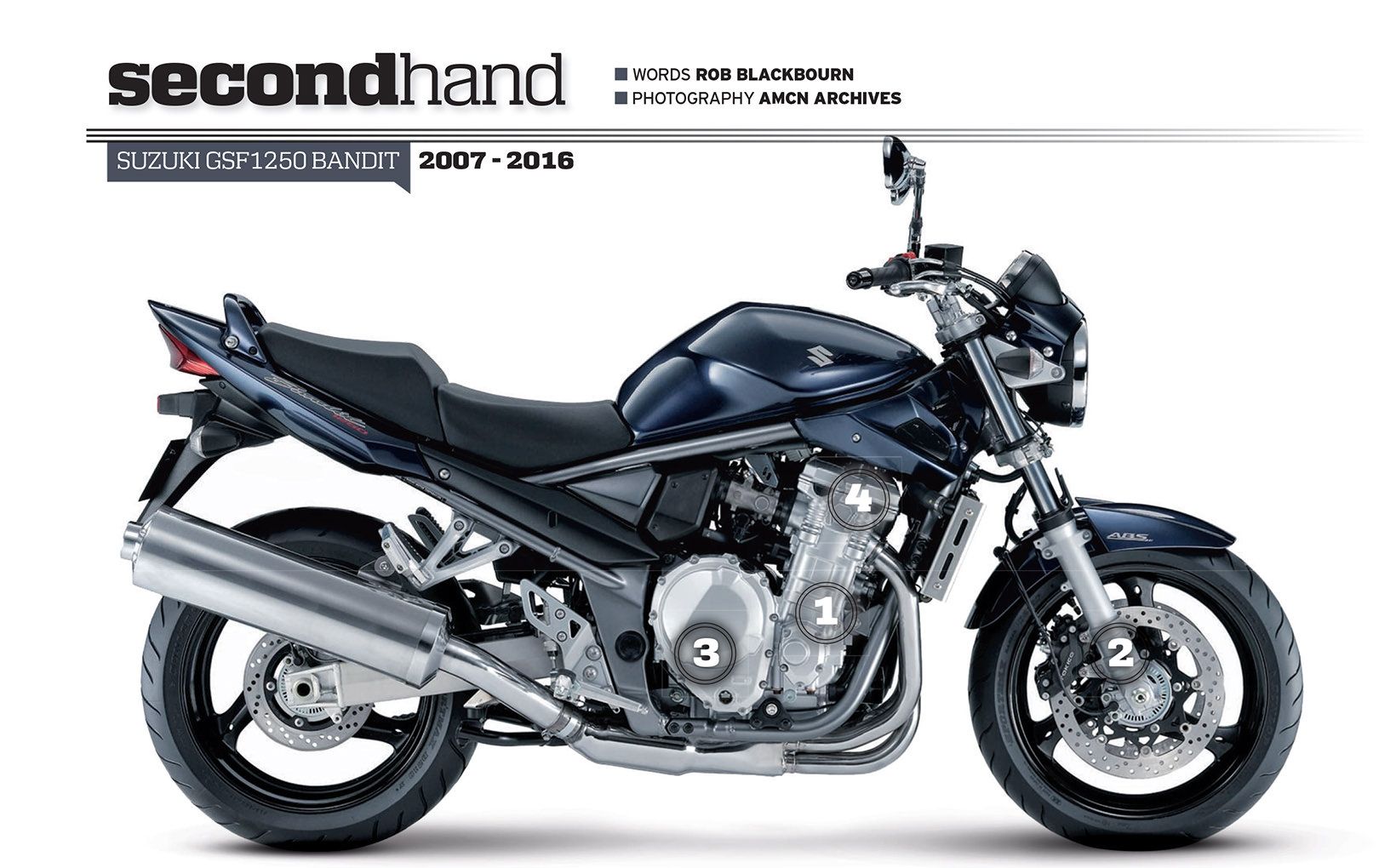 1 Heavy-duty six-speed gearbox is as smooth and slick a shifter as you would expect from a Suzuki 2 On the front, four-piston Tokico calipers grip twin 310mm discs. ABS is fitted to many 1250s 3 Oil temperature is controlled by a concealed fluid-to-fluid heat exchanger 4 Fuel injection with dual throttle valves produces surge-free, linear throttle response

The ‘Big Daddy’ version, the air/oil-cooled Suzuki GSF1200, arrived in 1996. Its stunning big-bore performance made it a pioneer of the muscle-bike category, perhaps contributing to the model’s ‘hooligan’ reputation. While its successor, the Suzuki GSF1250 Bandit launched in 2007, gave away nothing in performance and was still a bargain in ‘bang for bucks’ terms, it was a more refined motorcycle.

The new Bandit, a heavily revised bike, is powered by an all-new liquid-cooled, fuel-injected, 1255cc engine. Although the power and torque figures for the new engine were close to identical to those of the old air-cooled engine, the way it delivered its output was very different. It produced maximum torque at 3750rpm, whereas the earlier carburettor-fed version required 6900rpm on the tacho to access its peak torque.

Internal changes also allowed the new motor to spin up more rapidly in response to a fistful of throttle. The combination of the ultra-flat torque curve and its livelier response meant the new engine was the last word in rider-friendliness and gutsy performance.

A six-speed gearbox replaced the 1200’s five-speed unit. A new stiffer tubular-steel twin-cradle frame and improved suspension – 43mm fork up front and monoshock with linkage at the rear, both adjustable for pre-load – enhanced the Bandit 1250’s handling.

With an overall length of 2130mm and a dry weight of 229kg, the Bandit 1250 is a lot of motorcycle – but it has an uncanny ability to feel much lighter and smaller once you’re rolling, perfectly complementing the rider-friendly nature of the engine and the bike’s good overall ergonomics.

Its 785mm-high seat, which accommodates a broad range of rider shapes and sizes, is very comfortable. The fairly upright seating position is perfect for commuting. Clutch and gearshift action are sweet and easy. Braking is powerful and progressive. ABS, optional on earlier models, became standard on later models.

The engine is stunningly smooth and responds obediently. It’s a delight to use trickling through peak-hour traffic and is even more impressive when you leave the confines of the city.

You hardly need the smooth-shifting gearbox’s six speeds – at 100km/h in top gear you’re cruising at a relaxed 3200rpm, and you’re already into the very meaty part of the torque curve. You don’t need to kick it down a gear for overtaking. Just twist and go. If you’re so inclined, and if diplomatic immunity protects your licence, keep it nailed and the lovely big engine will seamlessly, smoothly and very rapidly transport you from 100km/h to 230-plus. It’s that easy and that good.

The handling is also impressive. Because it’s a sizable bike the best approach to the tight stuff is slow in and fast out – but it really powers out.

The 1250 Bandit is one of the most versatile bikes I’ve ridden. It’s a great commuter and a super long-haul tourer. It makes light work of a pillion passenger and luggage. And I haven’t had to make any apologies when mixing it with mates on sportsbikes in the hills. The Bandit’s modest thirst for fuel means the 19-litre tank is good for a safe touring range of 300km-plus.

While this review covers the basic naked Bandit 1250 model, the comments are generally equally applicable to the half-faired Bandit 1250S and 1250SA (ABS-equipped) as well as the fully faired GSX1250FA sports-tourer.

What to Look For

The Bandit 1250 is a robust and well engineered motorcycle that has proved to be reliable and quite trouble-free.

Trade contacts tell me there’s no pattern of known problems. Don’t worry about a bit of mechanical noise from an idling engine – they’re like that.

As always, adjust your offer to cover worn consumables like tyres, chain and sprockets, brake pads, and brake rotors close to minimum thickness. And check steering-head bearings – too many monos can take their toll here.

The ideal prospect is a low-kays example with a full service record and no signs of damage or neglect.

Capable DIY owners can look after a lot of the normal servicing on a Bandit 1250. On a naked Bandit you get good access to most of the mechanical stuff once the fuel tank is removed.

Valve-shim changes, when needed, and electronic fuel-injection work are best left to trained technicians with the right gear.