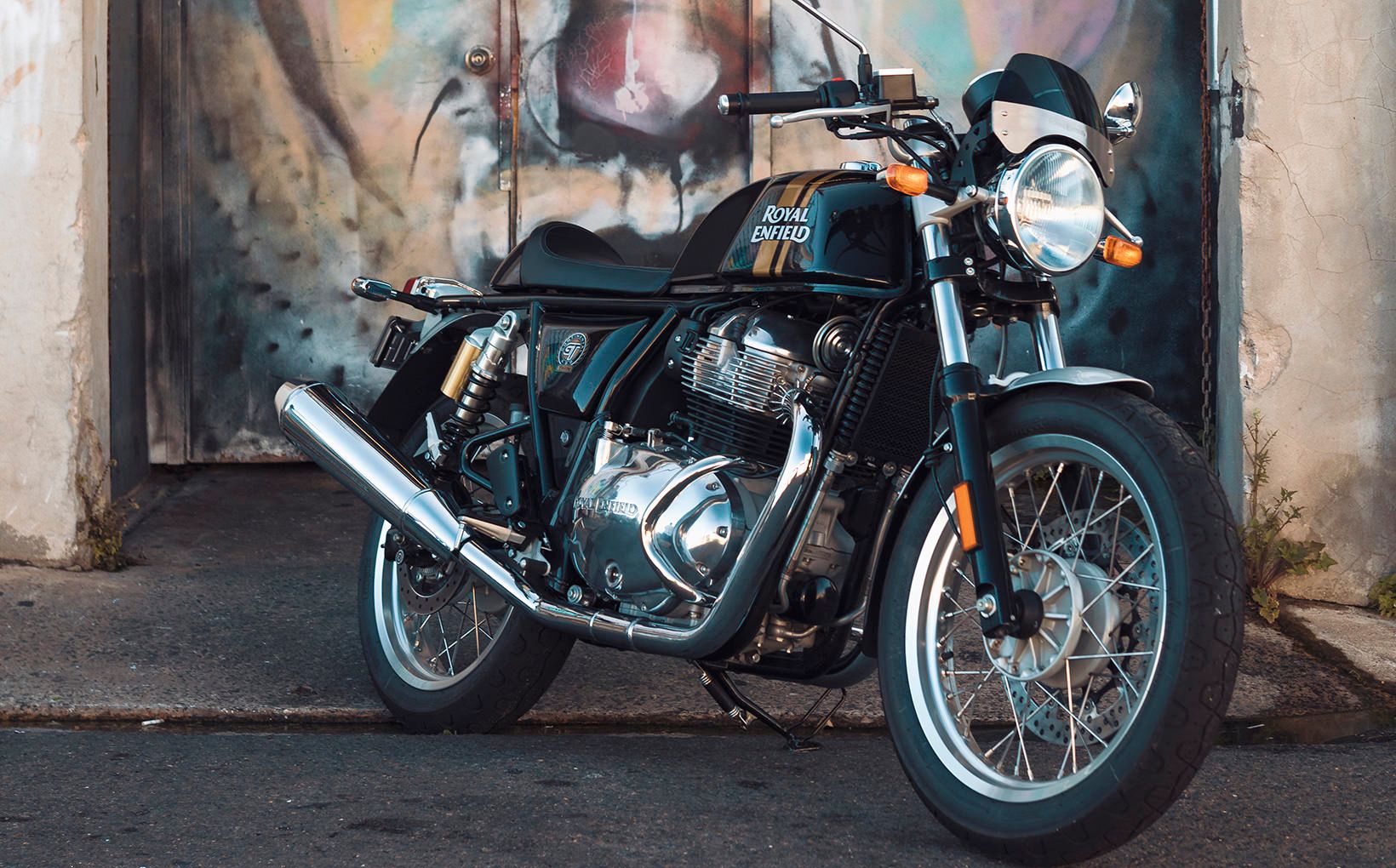 Before I’d ridden these bikes, I’d written an informative yet somewhat amusing paragraph outlining Royal Enfield’s lengthy history while simultaneously bagging their customer base outside of India as a bunch of hipsters looking for something quirky to be seen fixing at the side of the road. Although it wasn’t a bad read, most of it doesn’t appear here because having ridden the bikes, my pre-conceptions of what Royal Enfield now stand for have been demolished.

Having said that, some bits are worth repeating. For instance, Royal Enfield boasts the longest continuous production run of any current motorcycle manufacturer, stretching back to 1901 and manufactured exclusively in India since 1967. This is proper heritage, unlike some other brands whose link to the original marque is in little more than the name.

What I hadn’t realised, and which made my slightly flippant opener seem somewhat unworthy, is that Royal Enfield is the most profitable and fastest-growing motorcycle manufacturer on the planet, boasting sales of 850,000 units annually in 53 countries. That’s over 70,000 per month, which is more than double what it used to sell on an annual basis only 10 years ago. That’s what you call an impressive-looking sales chart and goes some way to explaining the obvious pride and enthusiasm being shown by the high-ranking Royal Enfield officials from India present at the launch. None of which precludes me from bagging out the hipsters later though, just so we’re clear. 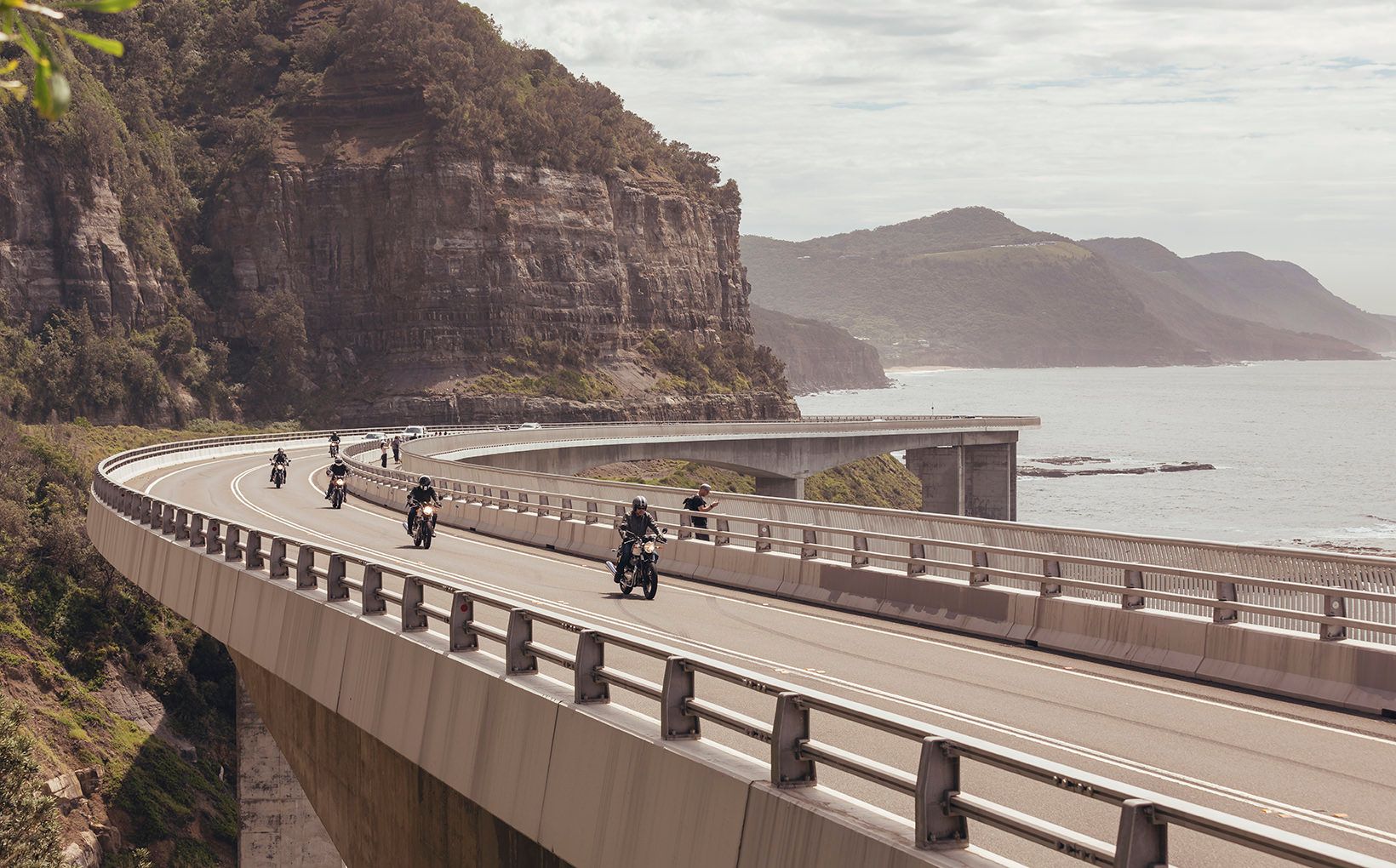 But first let’s concentrate on the very serious efforts that are behind bringing the 650-twins to market. The most telling of which is perhaps the opening, in 2017, of a huge research and development centre in the UK at Bruntingthorpe, rumoured to have cost three-and-a-half million pounds (do the conversion if you want, because by the time you read this, Brexit may have happened and the pound might be worth less than chocolate money) replete with the largest privately-owned test track in the country. Staffed with top-shelf engineers, designers and test riders from around the world, the more than 3000sqm building includes design, fabrication, paint and chassis workshops, as well as a bang up-to-date engine build and test facility.

Of those, the one that piqued my interest right off the bat was the chassis development part. Here at ARR we’ve ridden our share of retro bikes and often the look is more important than the ride, which for me personally is arse-about-face. Really, if a bike handles like a bathtub, I don’t care much about how great it is visually; it just isn’t fulfilling one of the primary objectives I require of a motorcycle. The fact that the frame is designed by Harris Performance, legendary in the UK and racing circles worldwide, and that there are top-level racers employed to fettle said chassis in the form of, among others, ex-BSB and Supersport rider from Australia, Paul Young, speaks volumes about what these bikes are about. I’ve ridden with Paul and he’s kicked my arse without batting an eyelid, so if it’s good enough for him... 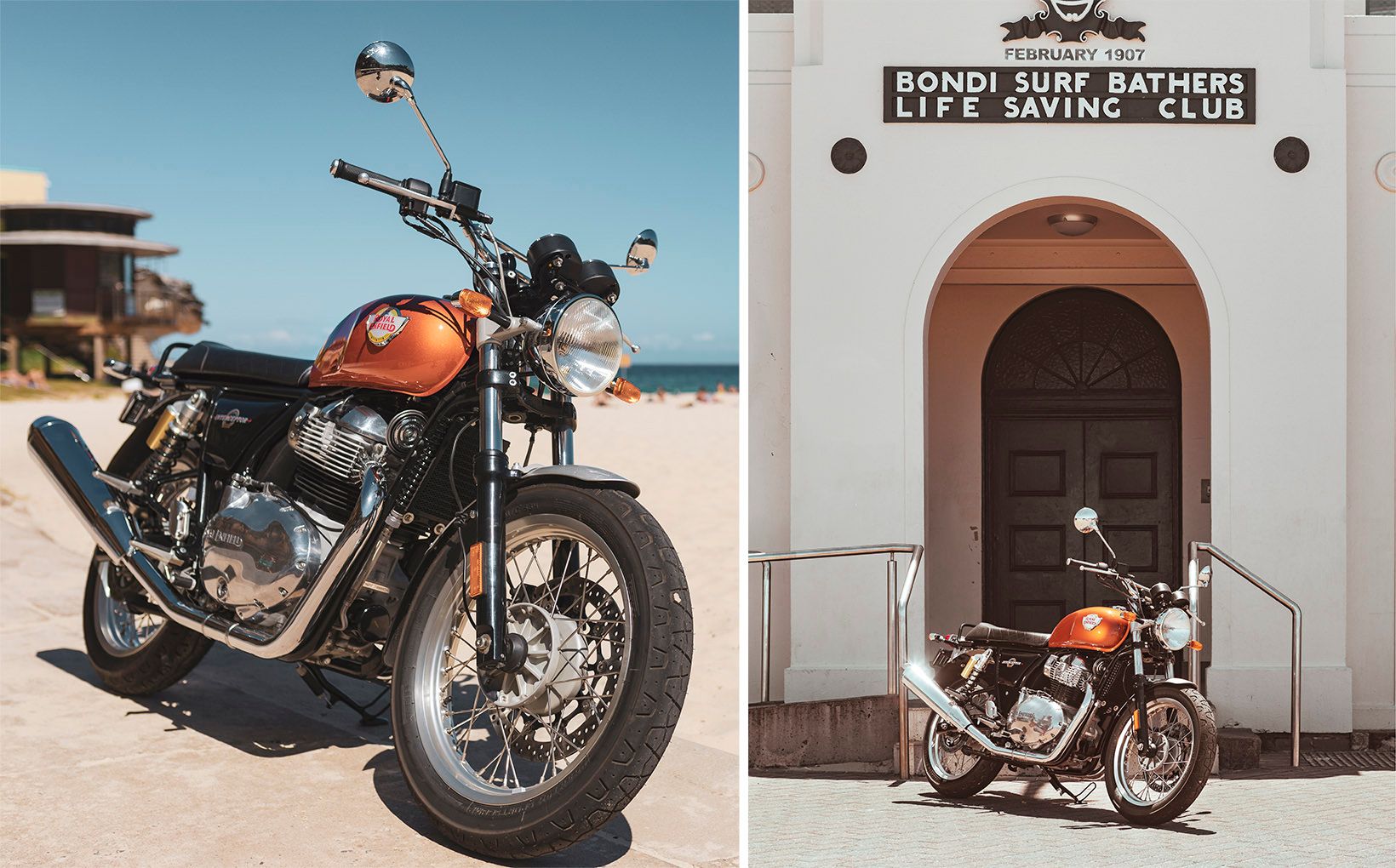 None of which would be much use if not for the thoroughly modern manufacturing plant in Chennai, India, full of robots and automated processes to ensure a consistent and, on first impression, good build quality.

The two models, those being the Interceptor and the Continental GT, differ very slightly in geometry, weight and wheelbase, but mainly in looks and ergonomics. The GT has the racier layout with clip-ons, smaller tank and slightly more rear-set ’pegs. The Interceptor is more upright, with a higher, flatter, cross-braced ’bar, a curvaceous tank, more forward ’pegs and a different seat. In all other respects, except paint and price, they’re the same bike.

Initially, I preferred the more upright position of the Interceptor, but both layouts have their place and clearly offer two very different styles from the same platform. My knees didn’t really fit into the cut-outs on the tank of the GT; in fact the position of the ’pegs meant my thighs were at an angle, putting them below the bottom edge of the tank. Not really an issue and at least the back of the cylinder heads are equipped with heat-shields to prevent any errant contact twixt knee and fin. 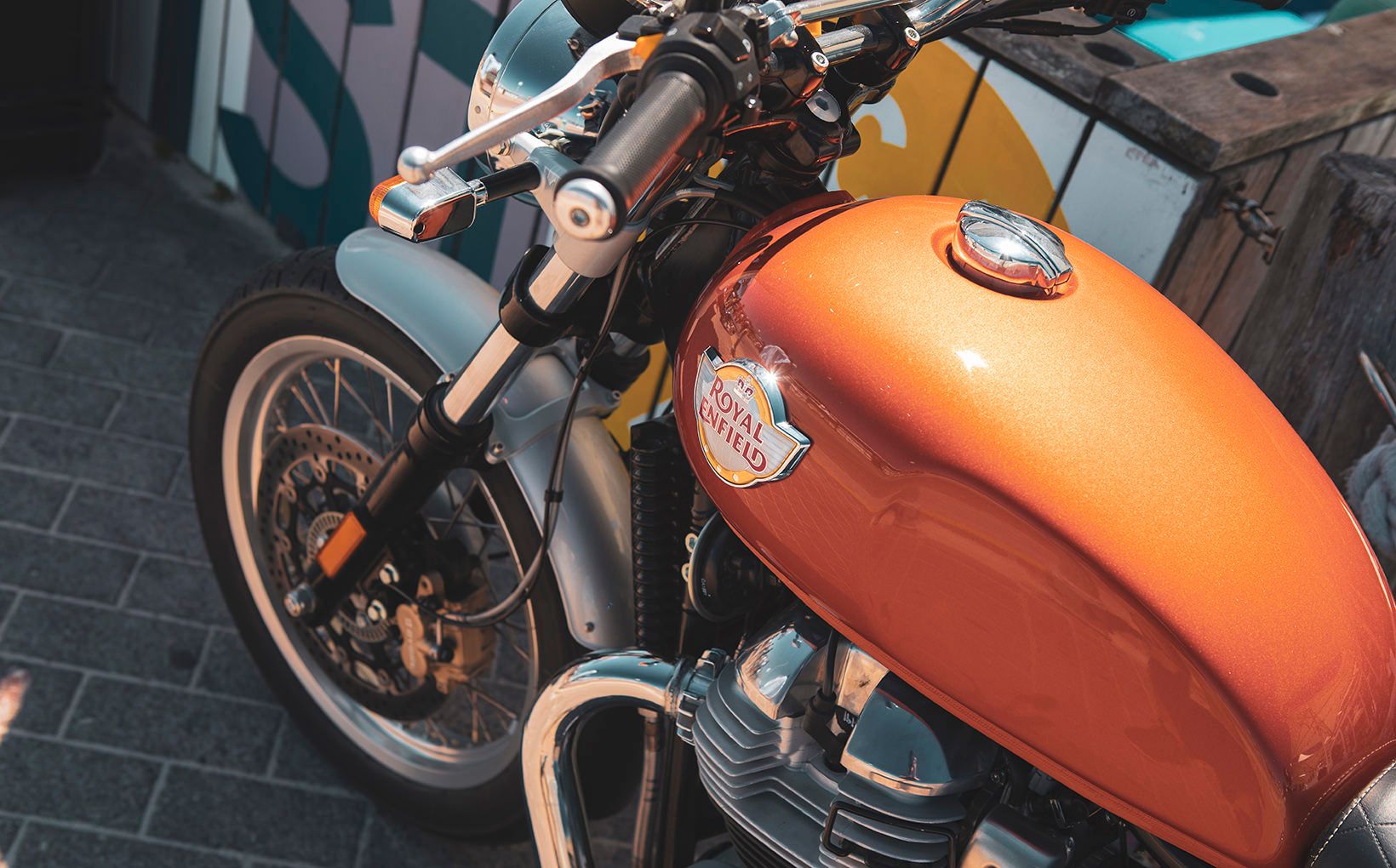 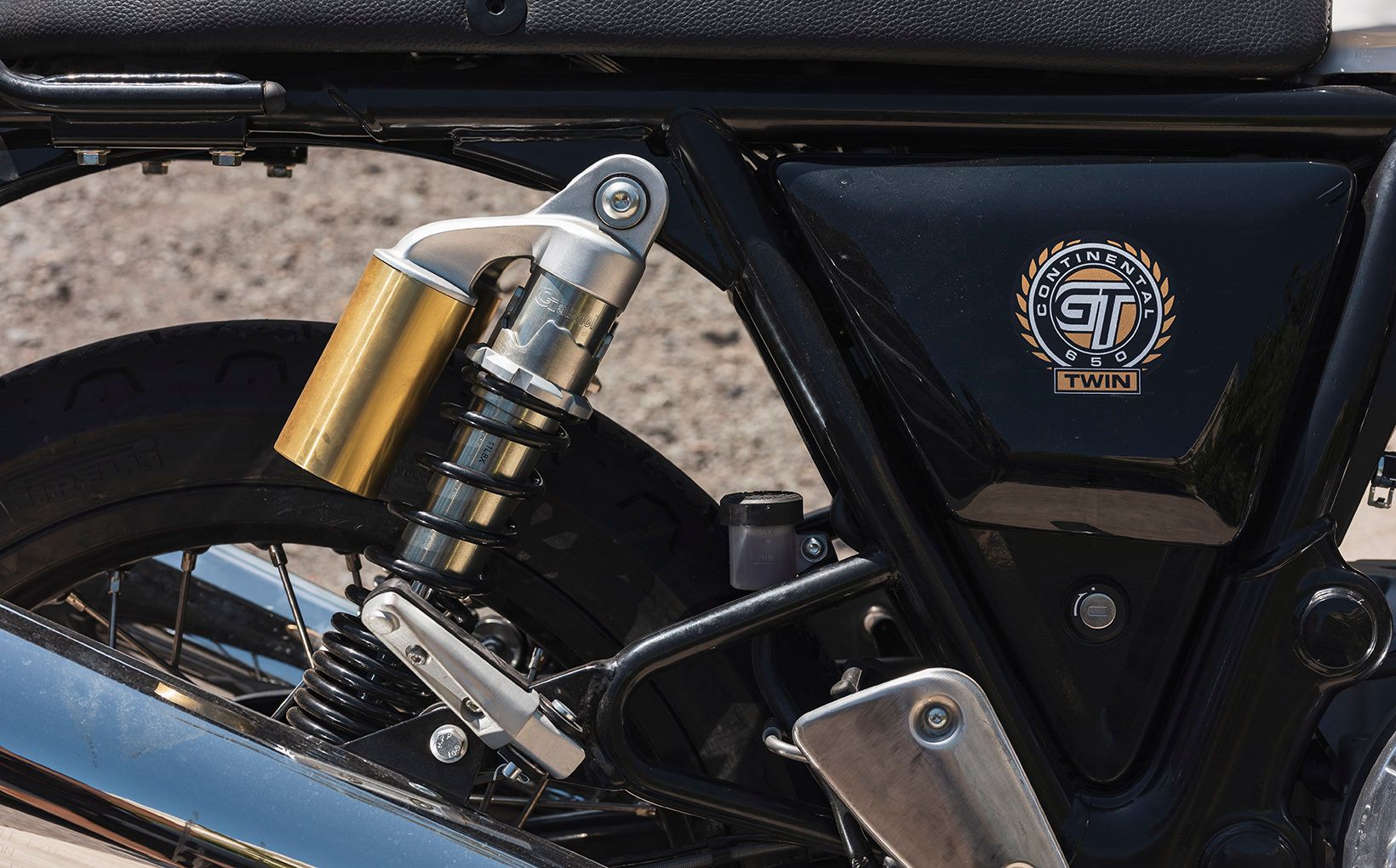 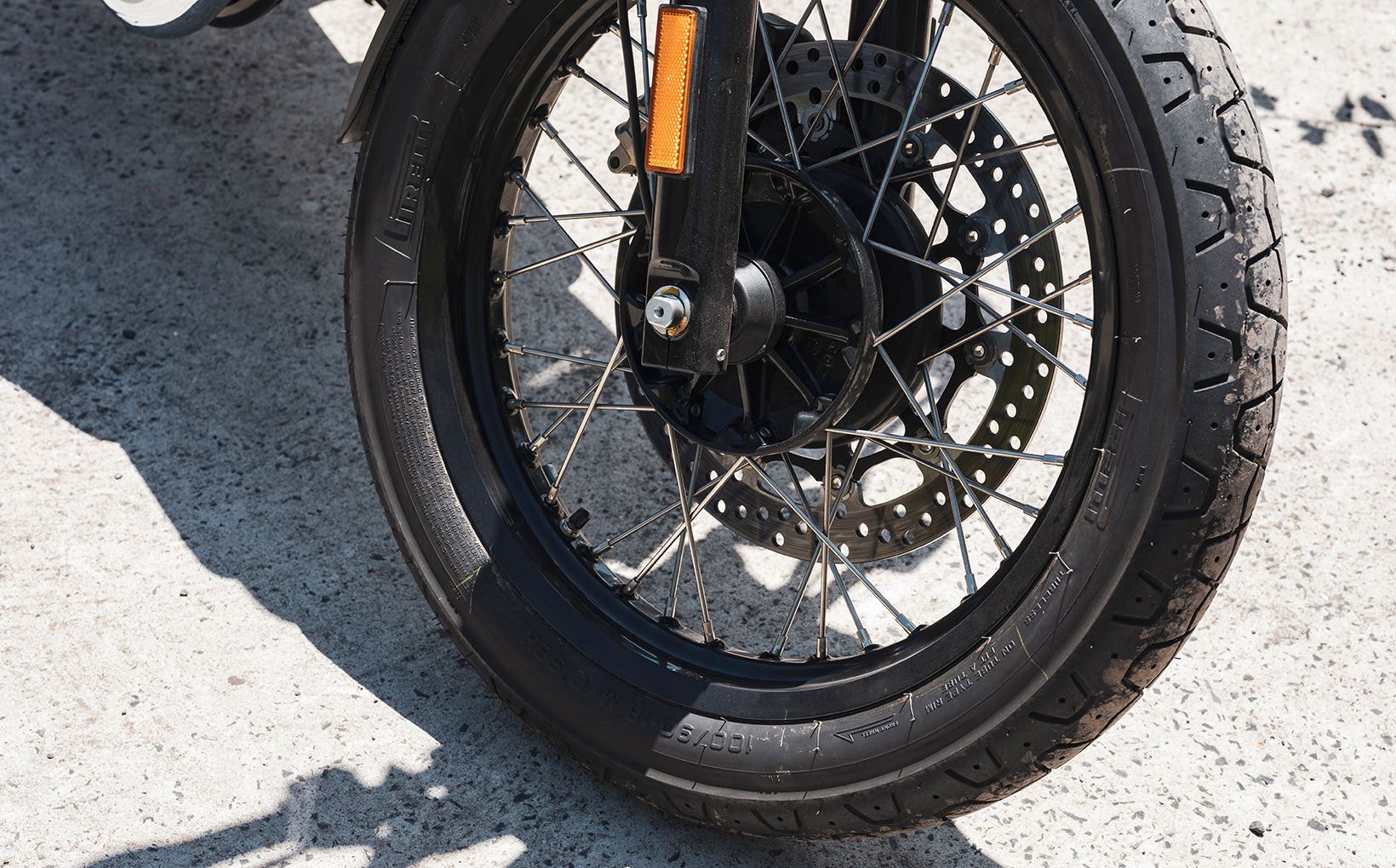 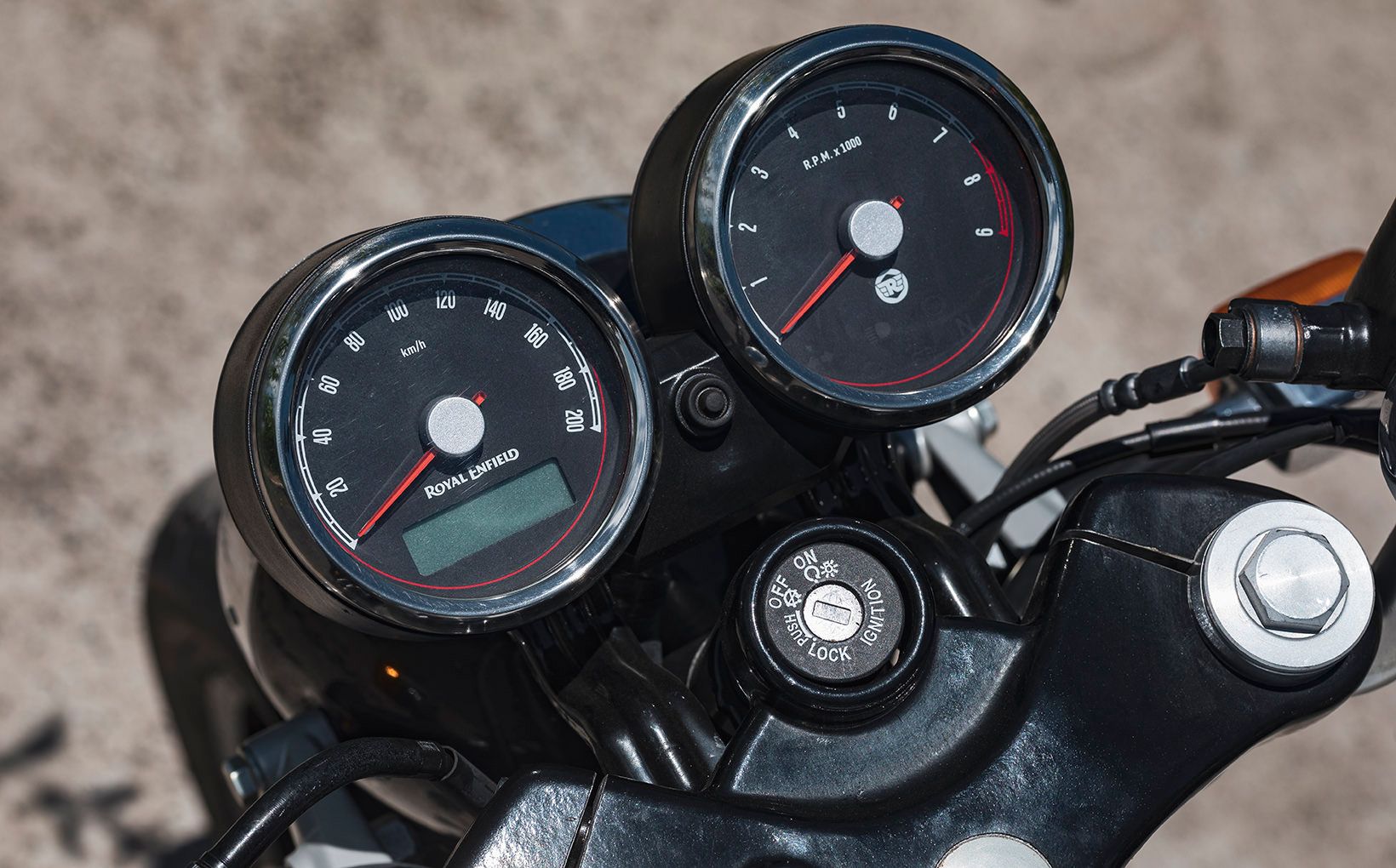 Although sharing similar DNA, the two bikes do feel quite a bit different. Both can be flicked around with ease and feel lighter than their nigh-on 200kg kerb weight suggests, however there was no doubting the Interceptor felt better on the edge of the front tyre than did the slightly tippy feel of the GT as it approached ’peg-scraping lean angles. If it means anything at all, I was decking out the Interceptor with far more confidence than the GT. We assume this is mainly due to weight distribution as both wear the same excellent Pirelli Phantom Sportscomp rubber and can be hussled through the bends in an extremely confident and momentum-conserving manner. When you’ve only got 47hp to play with, this helps immeasurably with average speed.

Keeping the motor on the boil is a light and completely infallible six-speed gearbox (even when I forgot there was no quickshifter) and neutral is a cinch to find, regardless of the fibs told by the dash light on occasion.

The operation of the slip/assist cable-clutch is light and remained totally consistent despite the sweltering conditions and the inevitably unkind attempts at hoiking the front wheel up, which seems mandatory whenever two bike journos gather at the same set of lights (I’m looking at you Woodbury). The bite point is hugely wide, making it simple for learner riders to quickly get a feel for pulling away without fear of stalling the engine, helped by the oodles of low-down torque available from just above tick-over.

Keeping up the list of nothing-to-complain-about, the Mikuni fuel injection is absolutely immaculate, whether picking up a closed throttle mid-corner or trickling along in traffic, and really there’s nothing more to be said of it.

The Paoili suspension looks cool, but there’s little adjustability — only preload on the remote reservoir shocks. It handled everything we threw at it and was remarkably plush in town, yet able to keep the bike under control when much nearer its 160km/h terminal speed. The damping rates suit the bike’s performance envelope and we never had a hint of wobble or weave, no matter how hard we went at it. 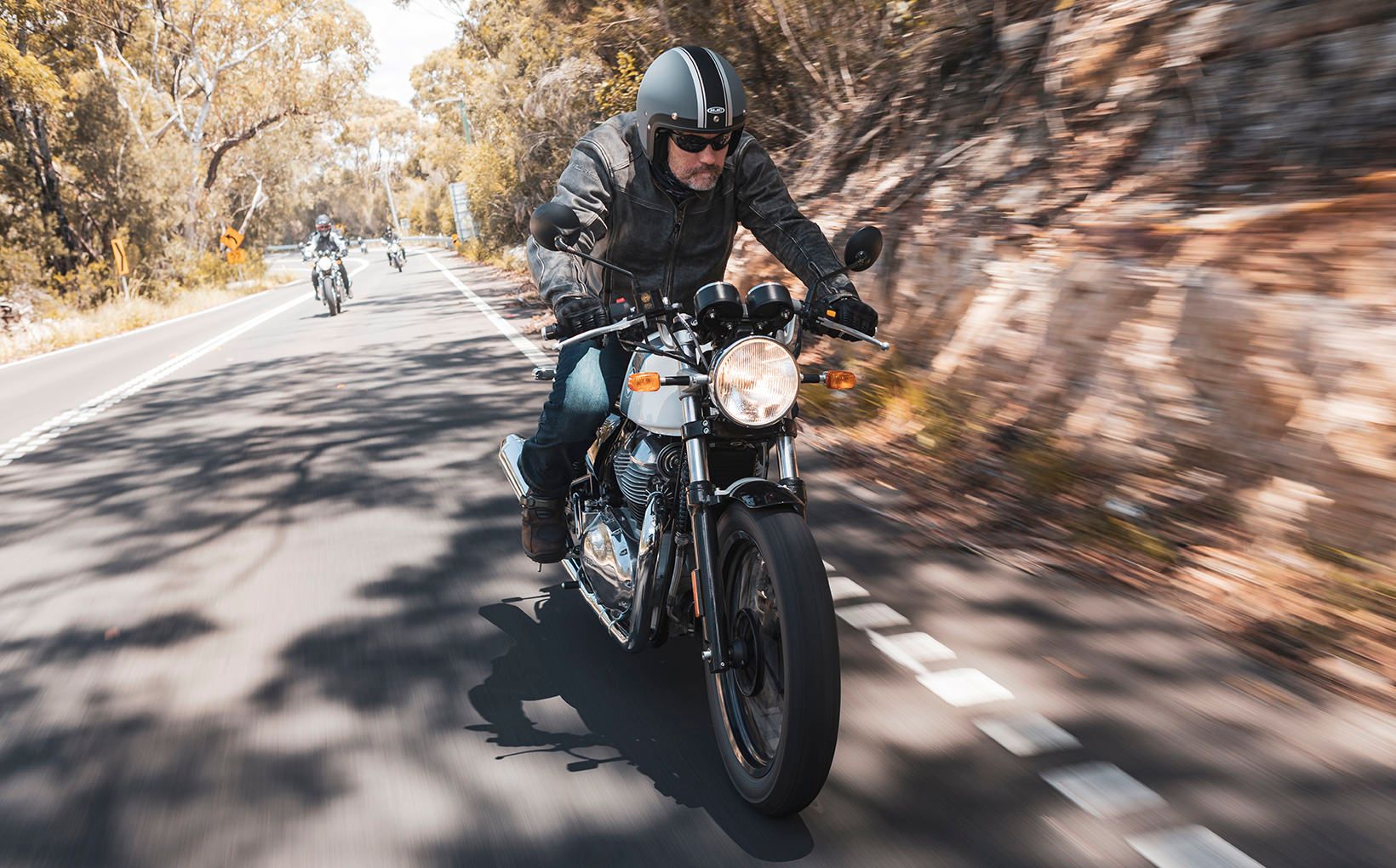 In addition to the proper rubber and well-fettled suspension, the Italian trio of componentry is completed by ByBre brakes, made by Brembo. Clearly these are not the most expensive brakes on the planet, but they are equipped with braided lines and the twin-piston calliper, mated to a 320mm disc, is more than adequate for the job in hand, especially when used in conjunction with the very effective 240mm disc out back. It does need a bit of a squeeze, which you soon dial into, but above all the performance never deteriorated, no matter how hot the pace or weather, or after two weeks of hard use.

From the saddle the view is minimalist, but fittingly so, with twin analogue clocks featuring a chrome surround and white numbers. The speedo has a small digital window displaying only the odo, a couple of trips and a fuel gauge. I must be getting soft in my old age as I kind of missed having a clock, but it’s refreshing to just jump on a bike and ride it without getting bogged down in flipping through multiple rider aid settings. And riding this bike is what it’s all about. The pure fun to be had blatting about on either of the 650s, revelling in the fruity bellow from the carefully chosen 270-degree firing order, is worth more than the entry fee alone, bringing us neatly to perhaps the most surprising aspect of these bikes: the price.

In any of the basic colour schemes the Interceptor is $8440 and the GT $8640, which is frankly ridiculous. Even in the most expensive fully chromed finish, which looks bloody gorgeous, the Interceptor is a bit less than nine grand and the GT a bit over. For that money, surely LAMS riders will be tripping over each other trying to be first in line at the dealers. Not only that, but if any non-learner riders want a cool, fun, funky and, for the moment at least, unusual second bike to cruise to the coffee shop, beach kiosk or the office, then look no further.

No short-term ride can really tell you much about long-term reliability, but certainly we rode these bikes as fast as they would go in ridiculously hot conditions for a couple of days on the launch, stopping and starting for photos and crawling through the urban sprawl to get there and back without a single issue. Then we hung on to one for the best part of two weeks, during which time it had the pants thrashed off it in an attempt to provoke some of its insides to appear on the outside. I lost count of how often I bounced the peachy motor off the rev limiter in search of maximum drive and top speed, and many a time I parked it in my garage stinking of hot oil and clutch plates. Did it fire up on the button every time? Instantly. Did a single drop of oil besmirch my garage floor? No it did not. Did it blow a bulb, pop a fork seal, have a problem finding neutral? Did it once overheat in traffic, the knobs fall off the switchgear, the brakes fade or the electrics have a freak out? Not a bit of it. What it did do was behave like any thoroughly modern, well-sorted and well-built European or Japanese motorcycle and for this money I don’t see how you can argue with that. 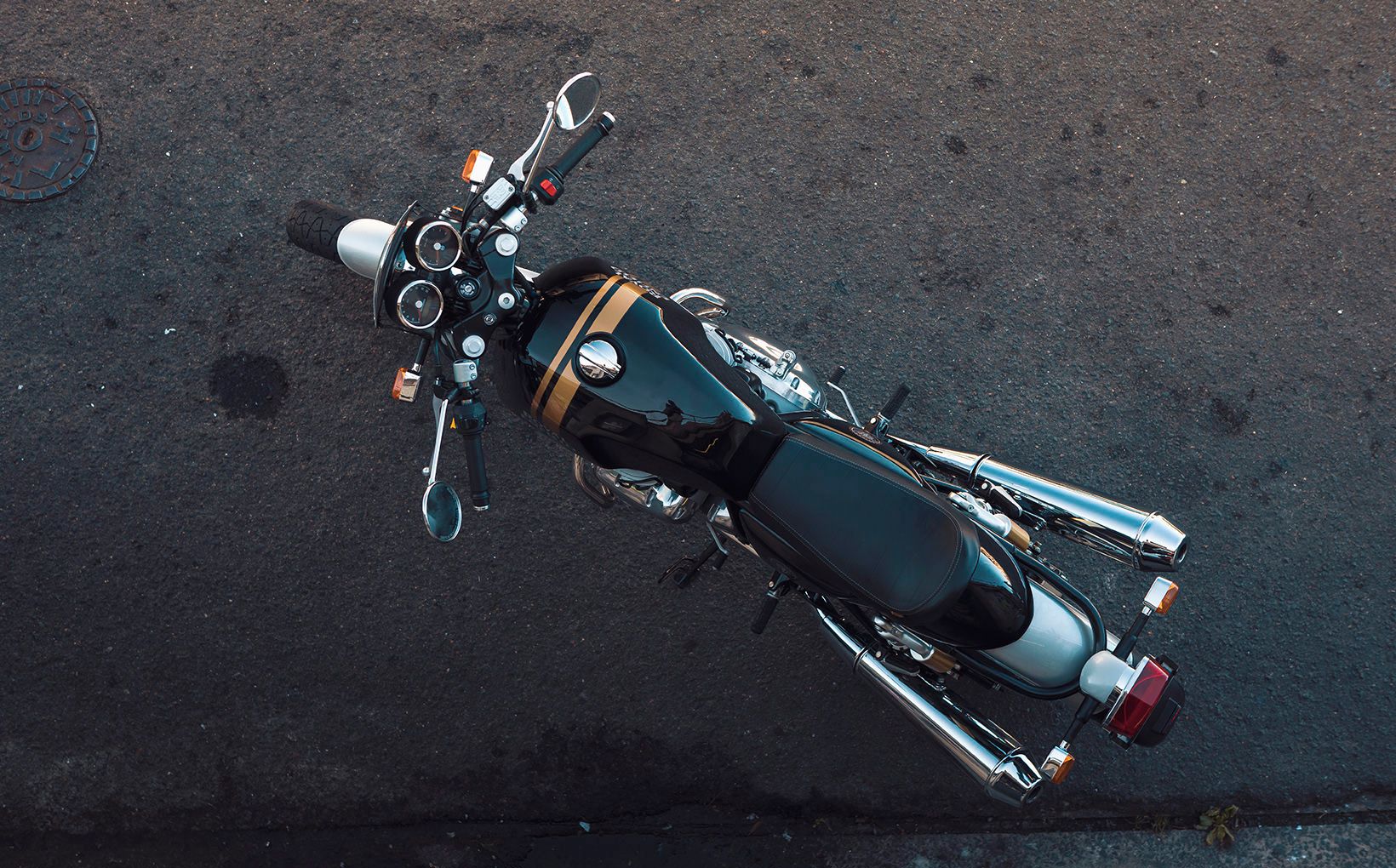 My sceptical self suggests the price of these bikes is artificially low in order to get bums on seats and get the brand more commonly seen and accepted, especially when you consider they come with a three-year, unlimited kilometre warranty and complimentary three years roadside assist. If this is what it takes to build a customer base, then so be it, because what’s on offer here, certainly at first viewing, is a far better motorcycle than we were expecting, dripping in retro cool and able to deliver a massive dose of fun along with considerable owner pride.

Building public confidence and a reputation as a reliable and serious brand is surely just the tip of the iceberg for Royal Enfield. You can bet your bottom dollar the people at the R&D facility in the UK aren’t just sitting around toasting themselves on a job well done (well, they probably are doing that and deservedly so). More likely, they’re also busy developing a range of non-LAMS bikes to be released in due time. Don’t be at all surprised to see something just as well developed, but with a few hundred more cc’s in the not-too-distant future. I for one can’t wait, and there’s at least one British and one Italian brand that will be taking serious note of what comes off the Royal Enfield production line in the near future. aRr