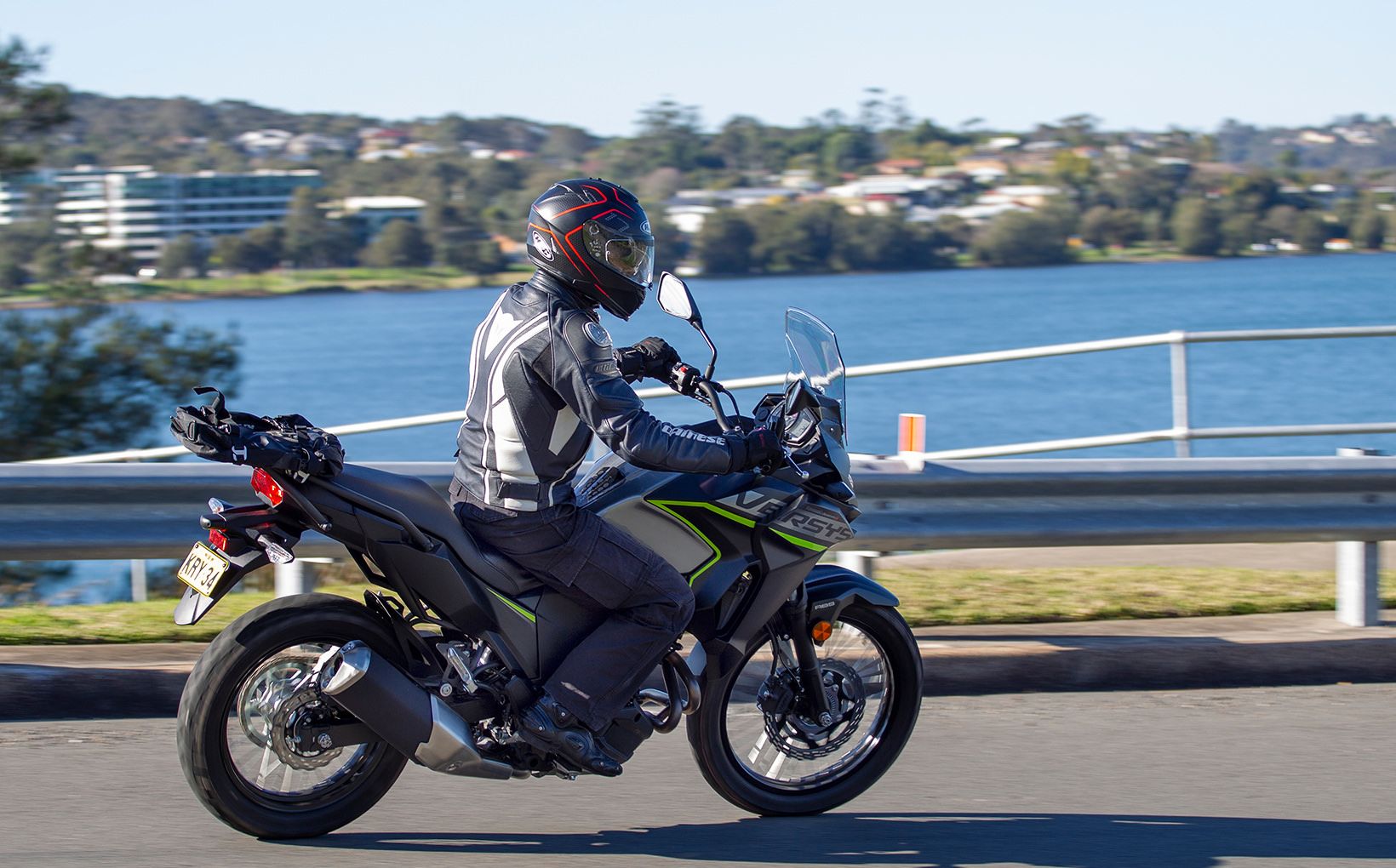 Readers older than me might remember when road bikes were sold with 19in front wheels and everyone expected they would be ridden on dirt roads, at least occasionally. Not so much today. I bet you know people who won’t ride their bike down a gravel driveway, let alone a fire trail.

Well Kawasaki has brought that bike back with the Versys X-300. It’s a road bike with adventure styling, laced wheels suited to bitumen or gravel combined with a well-sorted small-capacity engine, seating for two, a luggage rack and protective bodywork — all at a good price.

There’s really only been one major update to the X-300 since it was launched in 2017, and that’s the colours and graphics — I reckon the latest model looks fantastic, but if you tell me the big ‘Versys’ sticker that runs from the headlight to the tank is too big, I won’t argue.

For me the integrated colours of the new model work well, better than the different colours for different sections style of the earlier models.

The other big update is also the elephant in the room; with the small Ninja moving from a 300 to a 400, why hasn’t the Versys? Possibly because it hasn’t needed to, and to keep the price low — the current model is just a few hundred dollars more than the 2017 model was at launch. Where the Ninja needs to be a trend setter and needs to match or better the competition’s performance, the X-300 is being bought by riders who may prioritise price. 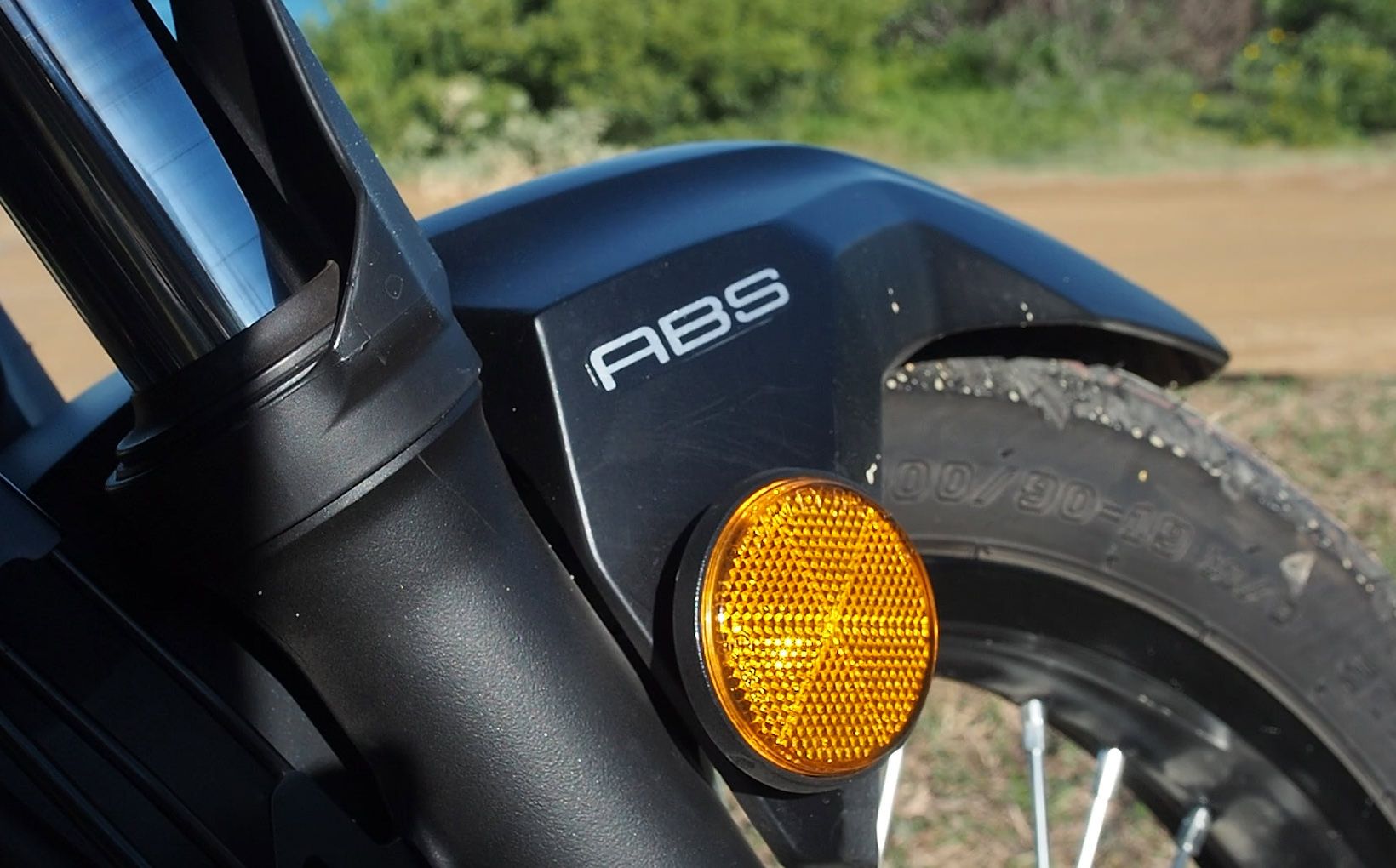 WHO IS IT FOR?

Although the X-300 is a great example of a LAMS motorcycle, it turns out the bike is actually really popular with older riders looking for a machine which is versatile, affordable and light. Those riders are using their machines to explore back roads that might be in poor condition or gravel, they use them to commute to work, they ride them because it’s more convenient than riding a big, heavy or expensive bike. 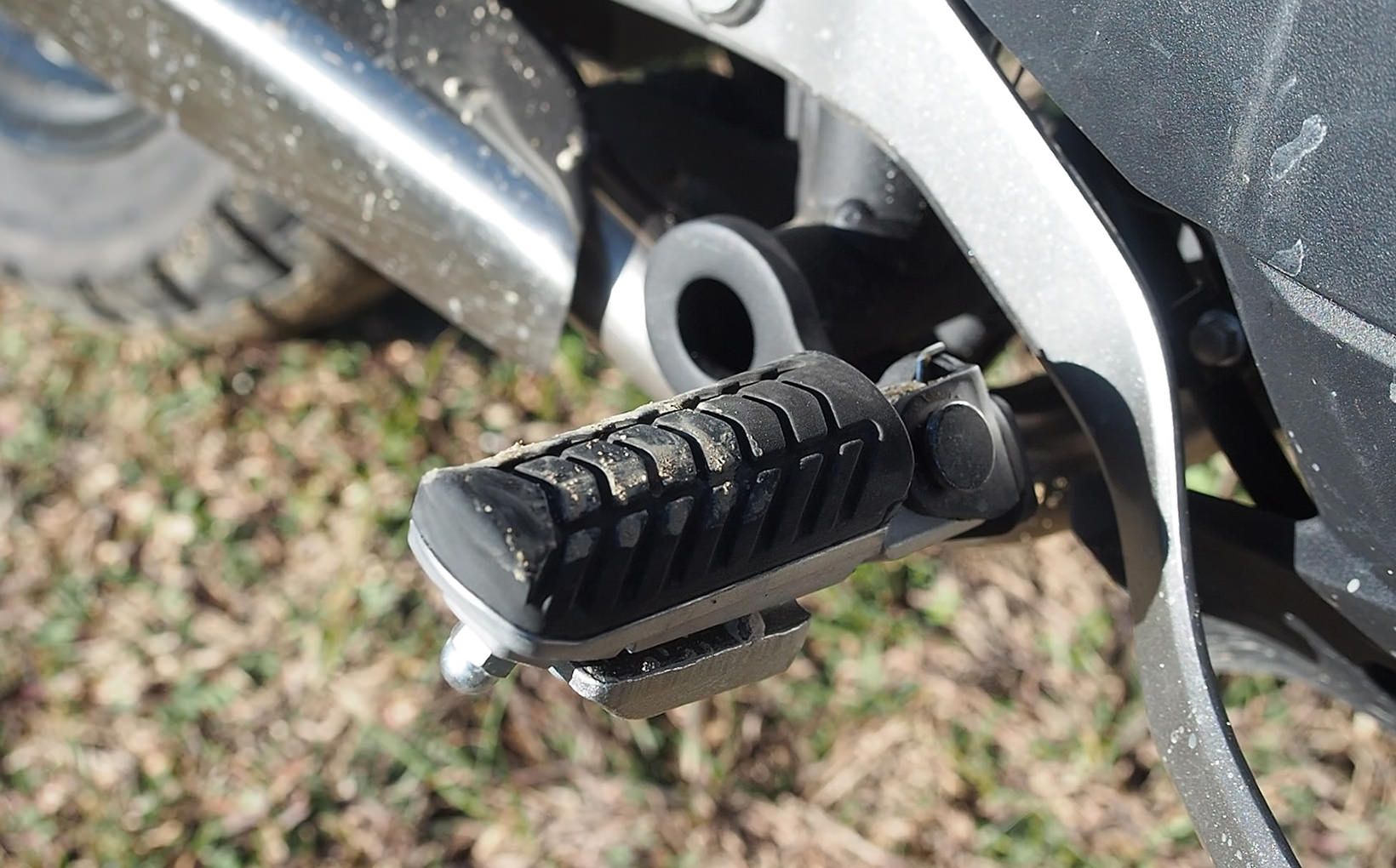 Sure, the engine isn’t exactly a powerhouse, the luggage capacity is a bit limited standard, the brakes aren’t super powerful, the suspension is basic and the rubber is a compromise, but it comes back to the age-old equation — will it do what you need it to do at a price you can afford?

For many riders the answer to that question is a resounding “Yes”. 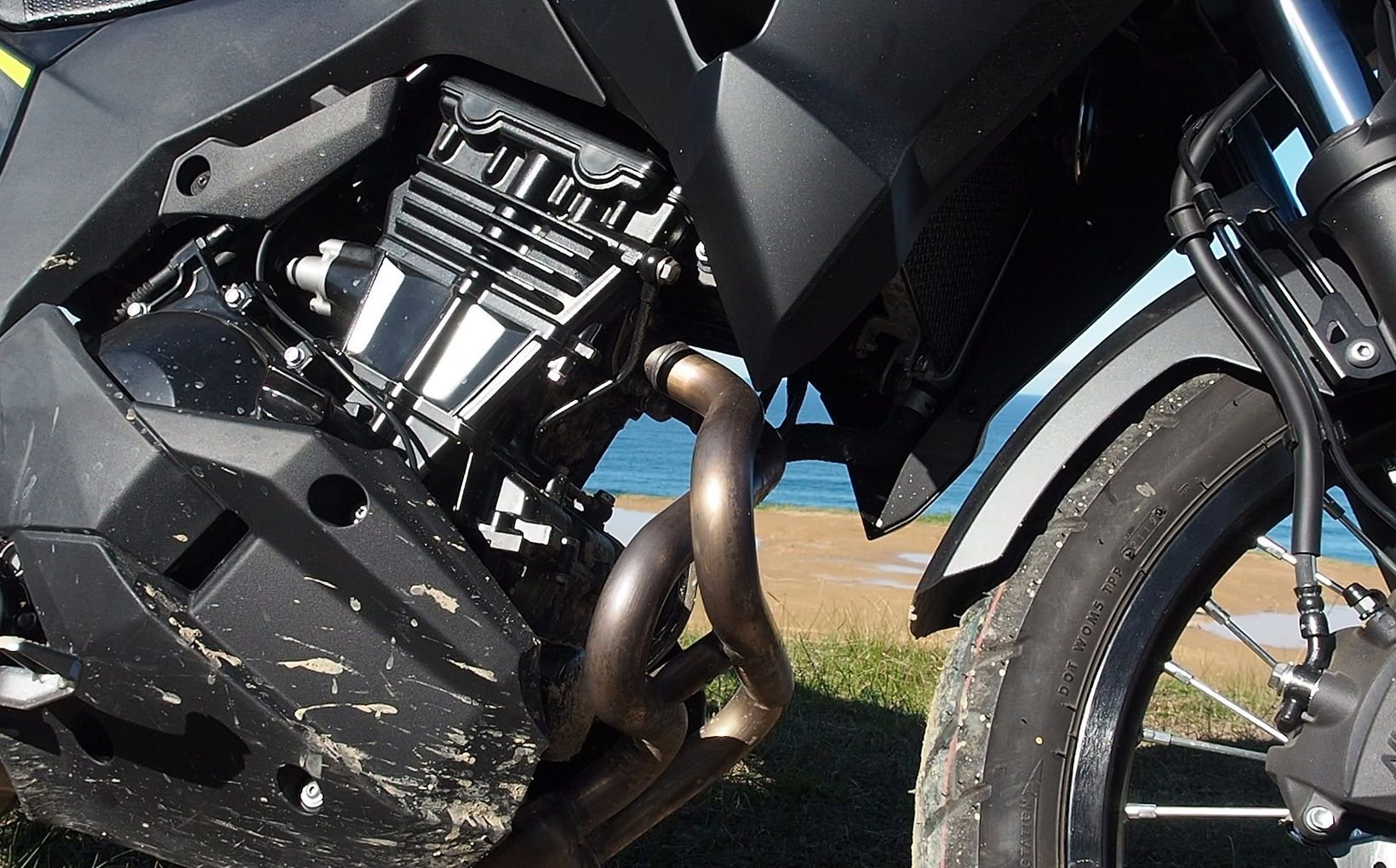 The powerplant of the X-300 is taken from the sporty Ninja, and it shows — you need to rev the bike hard to extract real performance. However, it’s got enough mid-range to noodle around slowly if you’re not into trying to go fast — and if you are interested in going fast, can I direct you toward the Versys 650? The bigger brother to the X-300 offers more performance, but it’s heavier and higher priced.

Taking the engine from a sportsbike does mean comprises, primarily the need to rev a lot harder than (say) a single-cylinder bike. But a counter-balanced twin like the X-300 is very smooth compared to a single, especially at highway or freeway speeds.

It’s a liquid-cooled twin, with some engine finning to make it look air-cooled (three fins on the left, four on the right… odd) with a six-speed gearbox, assist and slipper clutch, fuel injection and an exhaust which is somewhat tucked out of the way.

The motor is a gem, as long as you don’t mind revving it — 8000rpm on the tacho is something you’ll see all day long at highway speeds, but the short-stroke lightweight pistons should be up for this sort of treatment for years and years. It just feels a bit odd if you’re used to a larger-capacity motor or a single.

You’ll be using the clutch and gearbox a lot too, so it’s good Kawasaki fitted one of its excellent assist and slipper clutches to a slick-shifting six-speed transmission.

The clutch is beautifully light and easy to use (although so light it almost lacks a little bit of feel) and the gearbox snicks through the cogs without any fuss or bother.

Having a slipper clutch means less chance of locking up the rear wheel if you change down quickly and don’t match your revs to road speed, a safety feature. 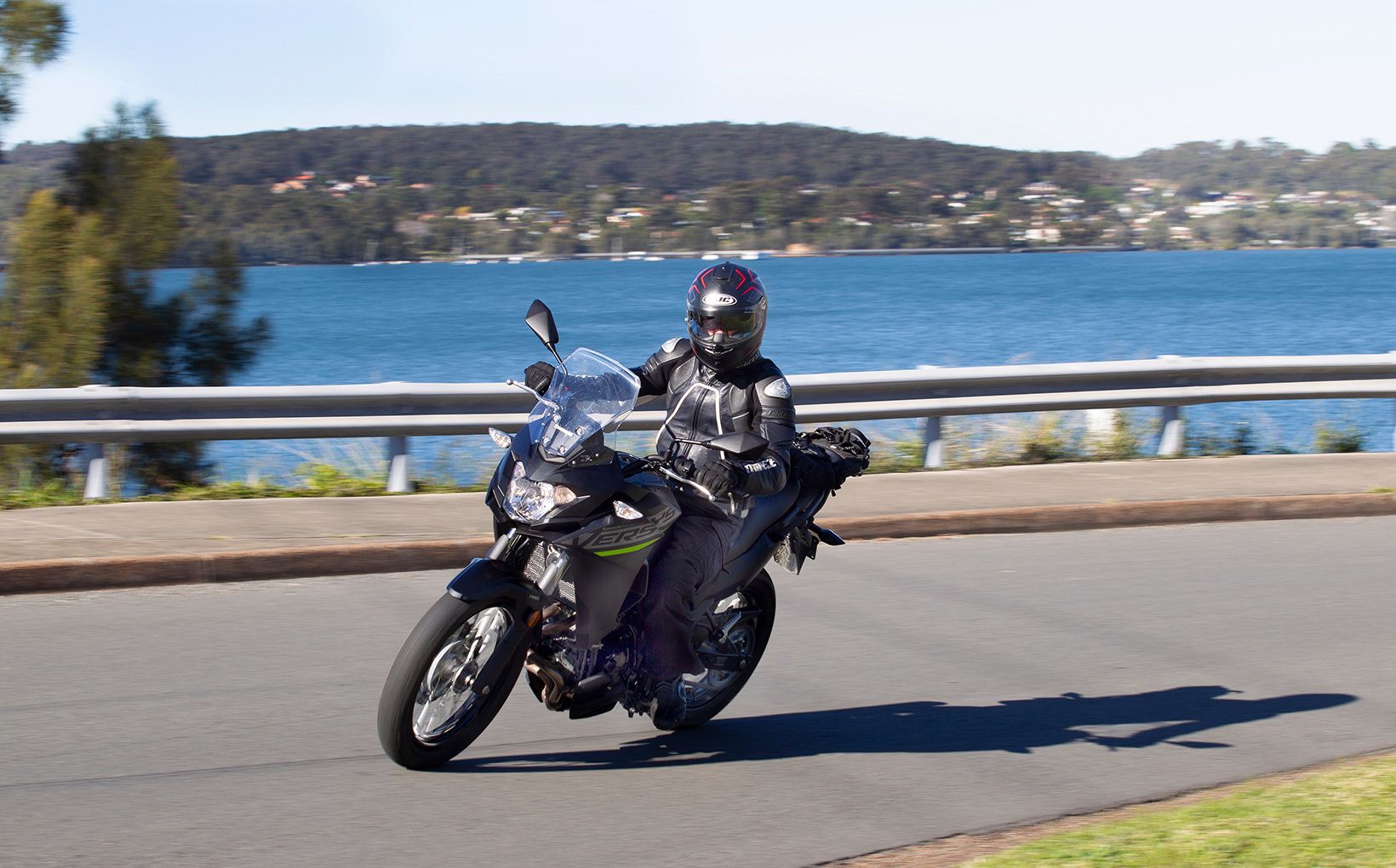 Non-adjustable conventional forks and a preload-only adjustable single rear shock combined with laced alloy rims sporting a single ABS-equipped disc each, a steel swingarm, wide adventure-style handlebars and rubber-topped footpegs are exactly what I’d expect on a bike like the Versys, and that’s what you get.

It adds up to another example of Kawasaki fitting out the X-300 with what it believes the buyer will need — no point breaking the bank with fancy adjustable suspension, switchable ABS or a lightweight alloy swingarm. While some of us might like to have those things, you won’t get them at this price point. 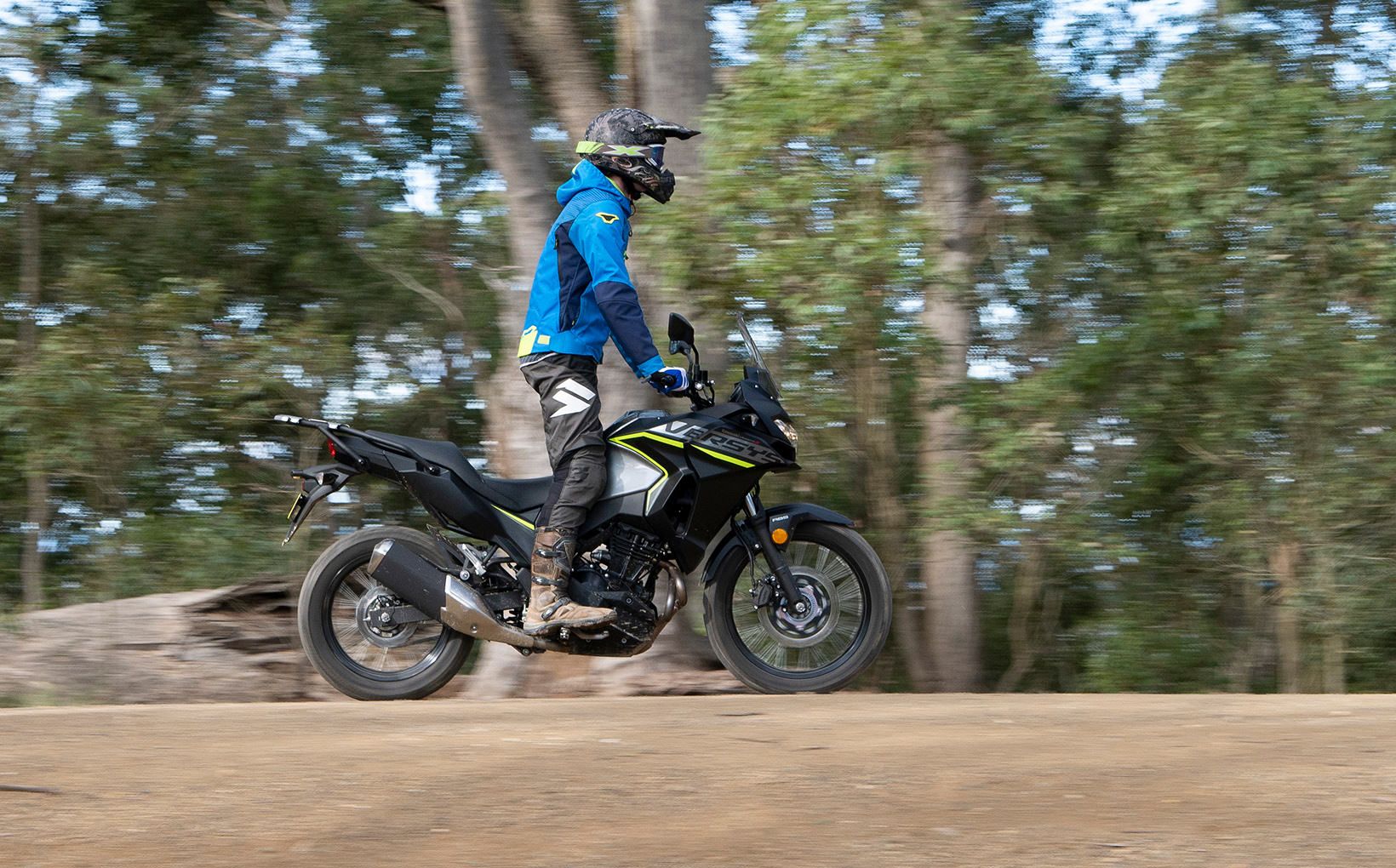 The X300 has a protective fairing and screen, analogue tacho with LCD speedo, a steel backbone frame which uses the engine as a stressed member, touring bodywork and screen, a luggage rack and a seat long enough for two.

The result is a comfortable riding position with a relatively low seat height (and it’s tapered to the front, so getting your feet down is easy). You get enough bodywork to keep the wind blast at bay, but enough venting in the fairing to reduce engine heat rising up to the rider when stopped at the lights. There’s modern, comprehensive instrumentation, but not a fancy TFT display, another example of cost savings without compromising functionality. 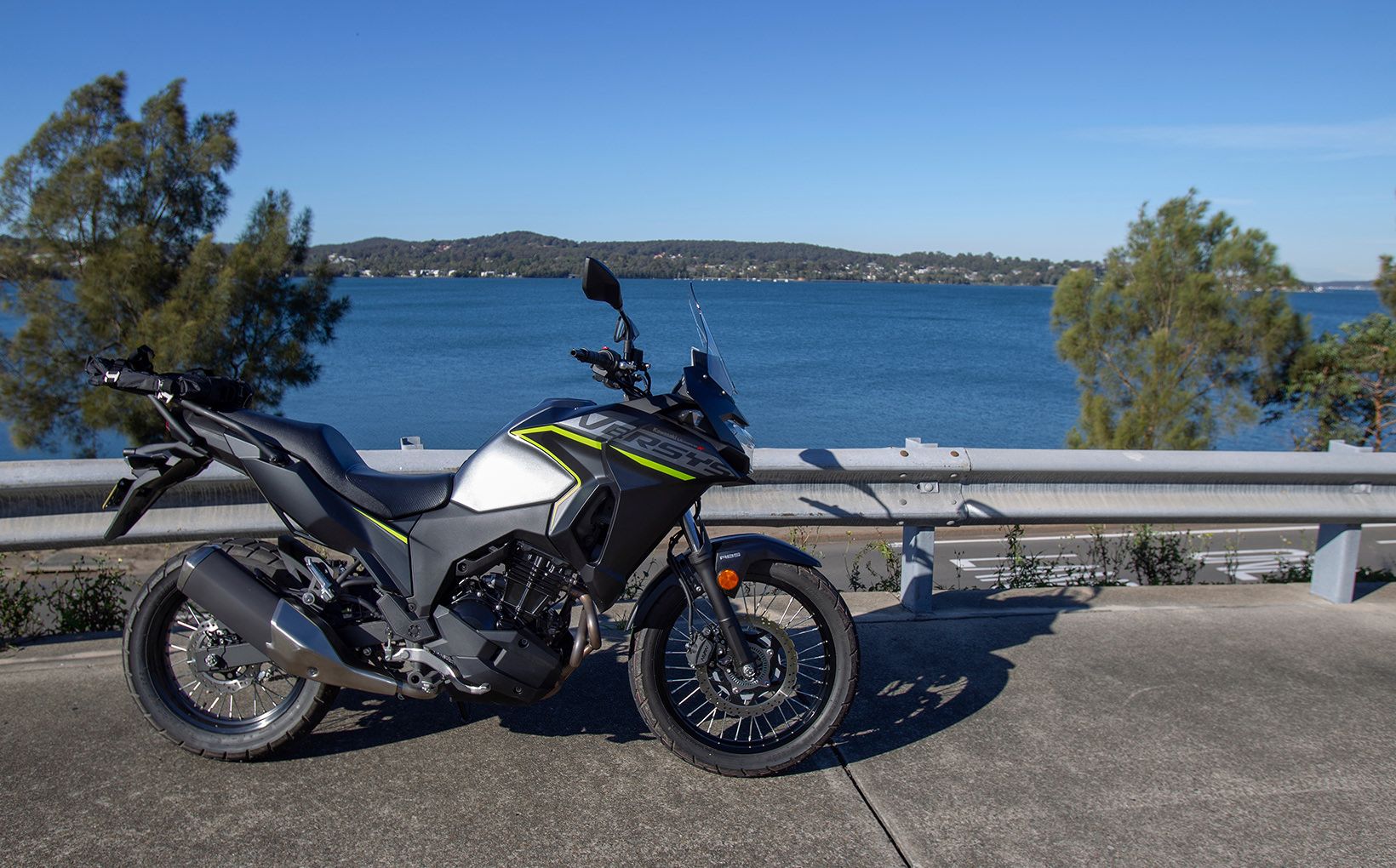 At 175kg ready to ride, the X-300 is one of the lightest “full size” bikes available today. Sure, there are lots of trail bikes and small commuter machines that are smaller and lighter, but I feel like I’m trying to ride a tennis ball on some of them.

The X-300 feels like a full-size bike, albeit a lightweight one.

That size and weight works fine on the road. The X-300’s riding position is upright, so you’ve got a great view of the traffic and road ahead, while the mirrors provide a decent view behind. The footpeg position is comfortable.

At low speeds the bike can scythe through traffic because it is narrow, there’s lot of steering lock, the ’bars are higher than most car mirrors (although watch out for SUV mirrors) and you don’t have to slow down for speed bumps. Just keep the revs up — slip the clutch and wind on the throttle — so you’ve got power on tap when you need it.

Rising through suburban speeds, the X-300 is at its best, cruising comfortably in that 40-90km/h range. On a twisty mountain road this is great fun, not so fast that you’re likely to get into trouble (from safety or legal perspective) but fast enough to enjoy looking for the limits of both the bike and your ability.

The worse the road, the more appealing the X-300. Smooth twisty roads reward sporty riding positions and sticky tyres, so in those situations the Ninja 400 might have been a better choice, but on Australia’s bumpy backroads the Versys will be faster, safer and a lot more fun, as the long travel suspension absorbs the bumps and the wide ’bars make finding the right line through the turns easy.

But you start to notice a few tingles through the ’bars, tank and footpegs, the extra wind noise and blast creeping around the screen and there’s not a whole lot of performance left for overtaking, so freeway riding is a little compromised, as it is with all small-capacity bikes.

The ability to go from being stuck behind a truck or caravan doing 90km/h quickly and safely — by going to 130 at the flick of a wrist — is one reason why many experienced riders buy big bikes.

Another reason is carrying capacity… add a passenger and some luggage to the X-300 and overtaking ability will be compromised further, so
if that’s your plan you might want to have a look
at the Versys 650. 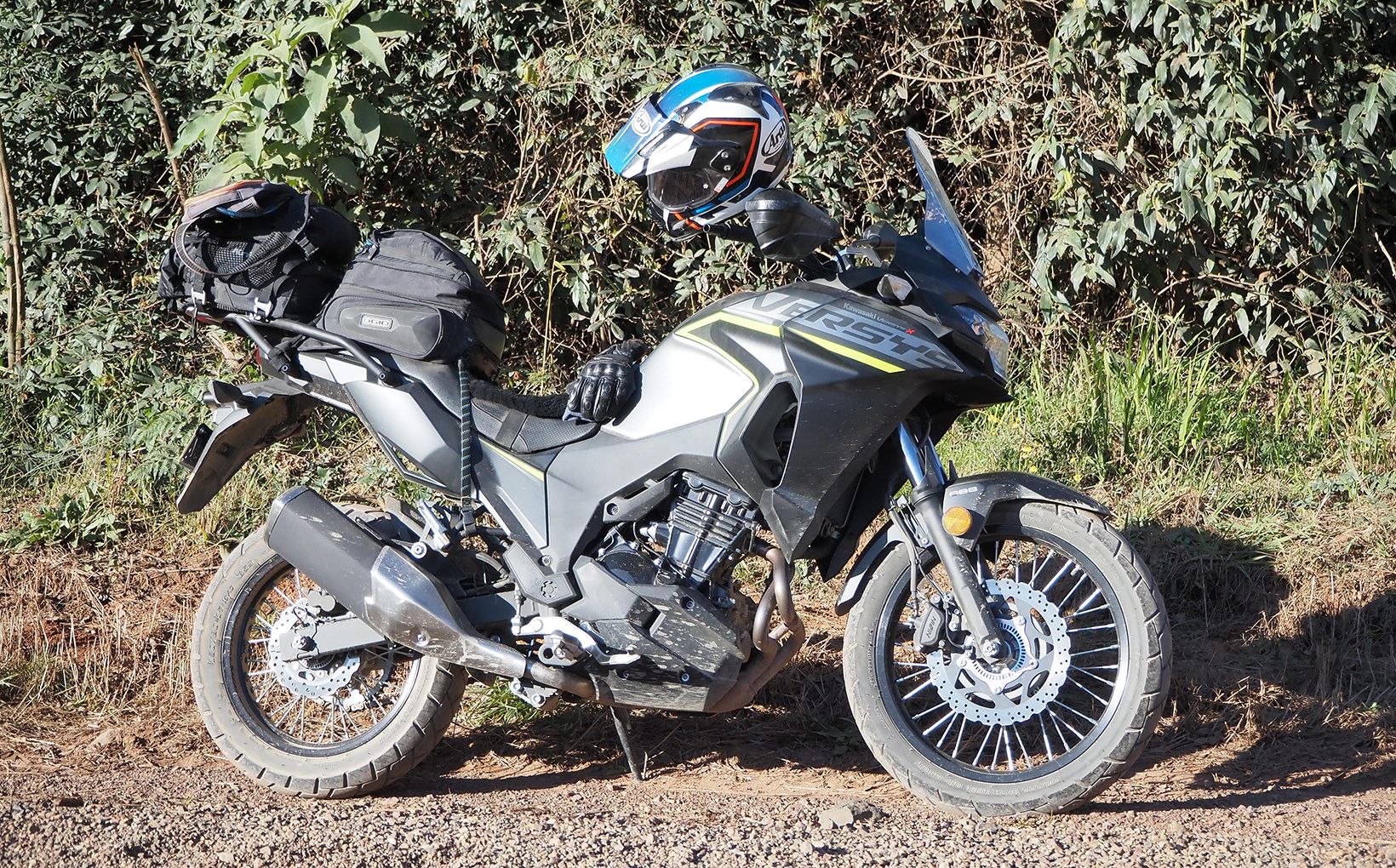 Kawasaki doesn’t promote the Versys X-300 as an adventure bike because it’s not. If you want that, buy the KLR650. What the little Versys can do is happily traverse gravel roads and maybe the occasional fire trail, exploring rather than bush-bashing.

The 19in front wheel comes into its own in these situations, providing a lot more stability and safety than a 17-incher. The suspension on the Versys works absolutely fine on dirt roads too, up to a limit: keep both wheels on ground and you’re unlikely to have any problems. Start jumping spoon drains, as I did, and the landings can be a little bit exciting. 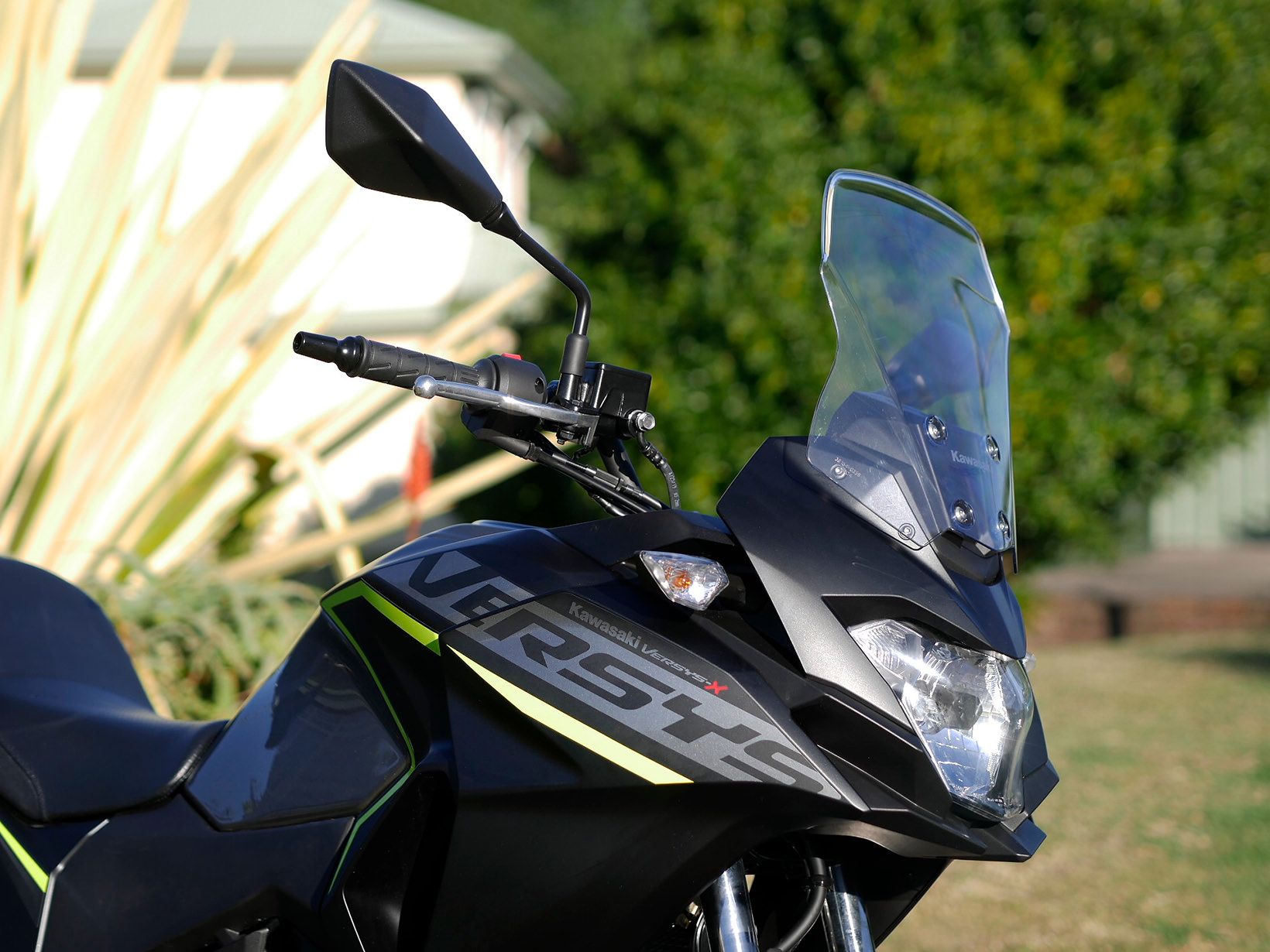 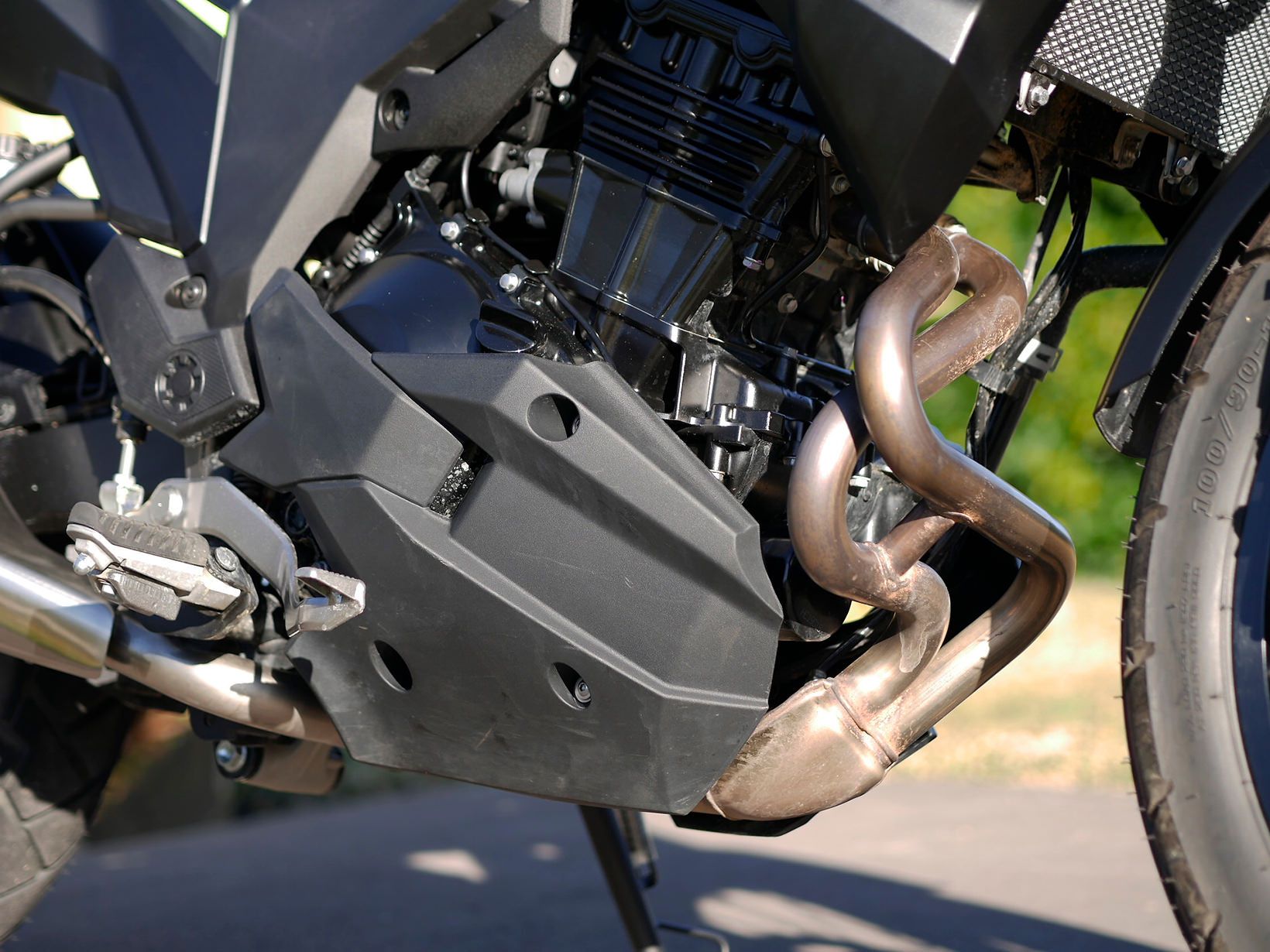 The pipes could cope a flogging if you go adventure riding.

Although the Versys X-300 would make a great city bike with its ability to jump kerbs, park anywhere and ride rings around traffic snarls, I suspect most buyers will be using them in the countryside.

For someone who rarely travels at freeway speed, who doesn’t need lots of overtaking performance but may wish to see the view from down a dirt road, it could be perfect.

For the grey nomad wanting to put a bike on the back of the RV and use it to get around the countryside, with or without a passenger, perfect. For the property owner looking for a bike that can go into town or across
a paddock, possibly perfect. For someone wanting a non-threatening, easy bike to learn to tour on, perfect.

For someone who has made it all the way to the
end of this article about a low-powered, cheap bike? You decide. 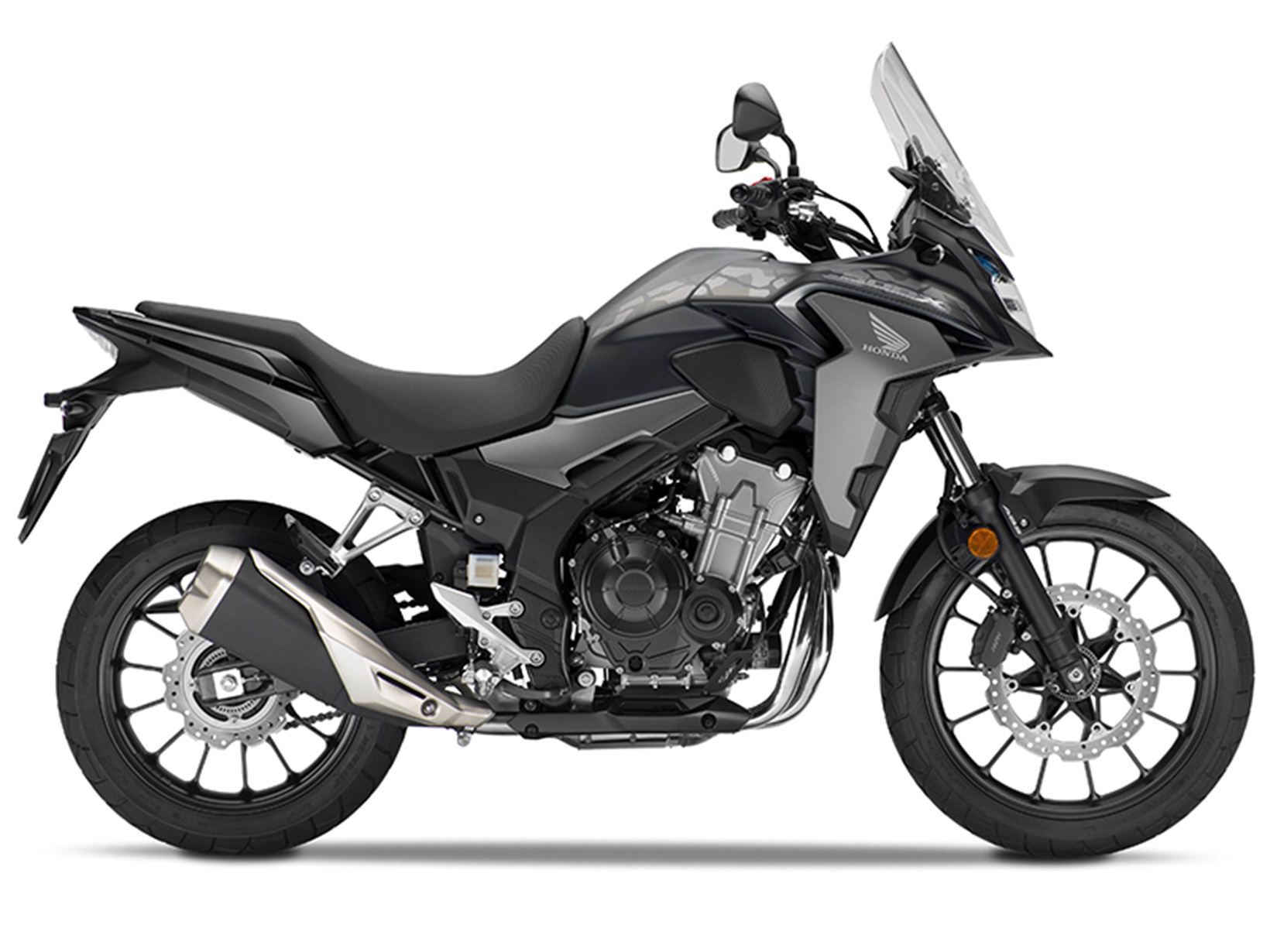 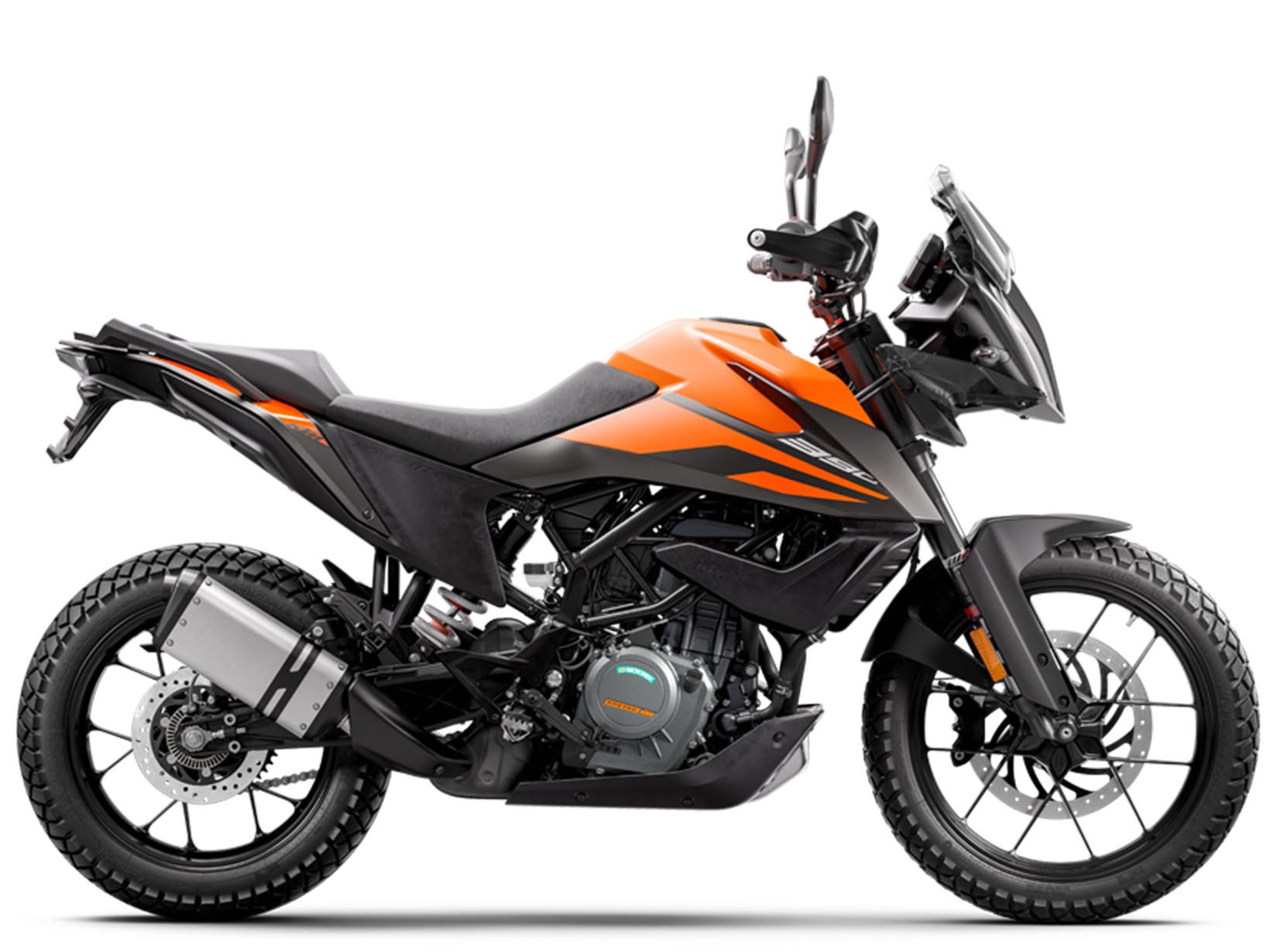 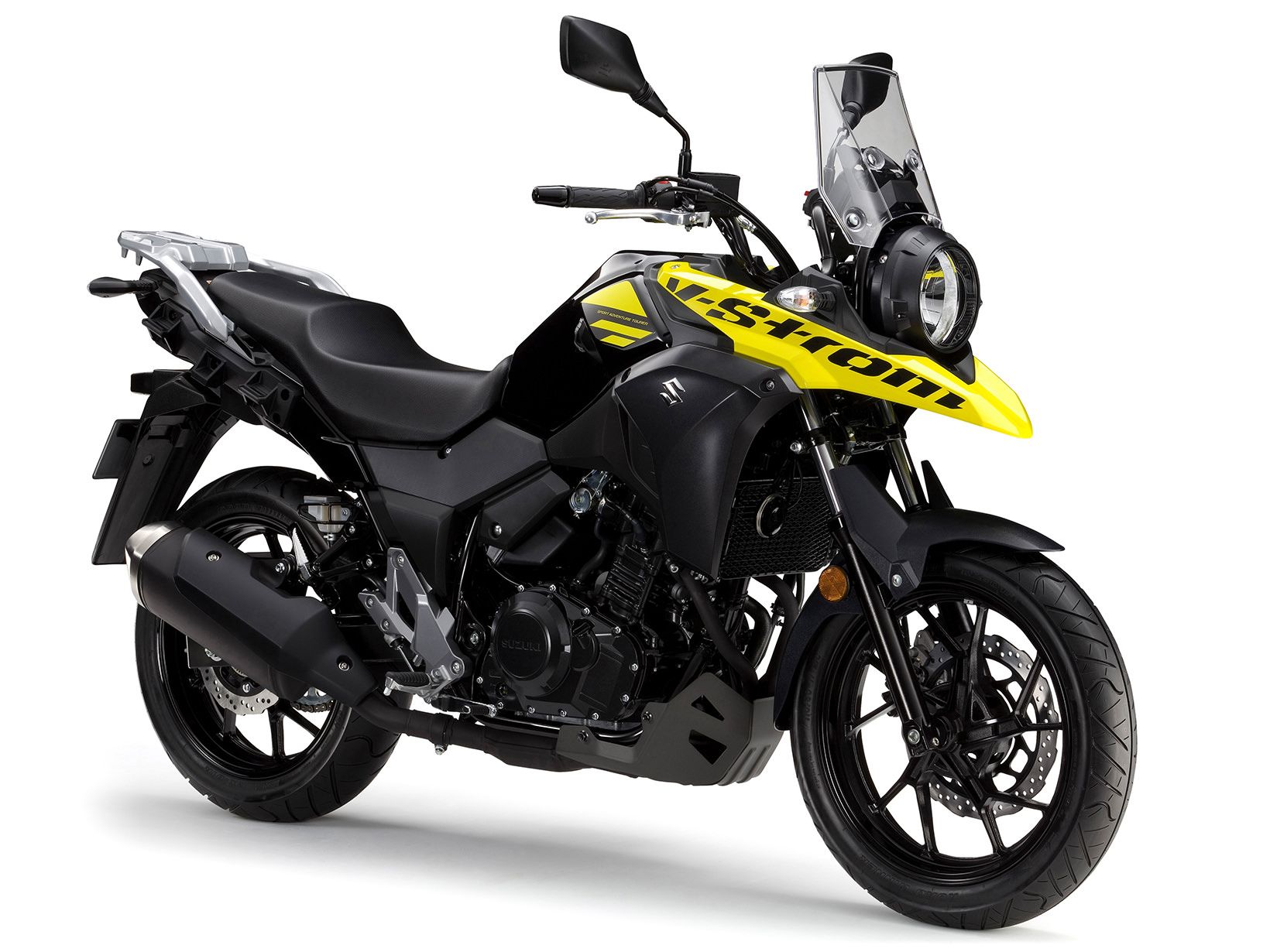 The little Honda is bigger than the Kawasaki and those extra cubes are nice to have, especially for highway riding. However, the suspension on the Versys is a bit better, it’s cheaper and lighter.

A single-cylinder machine from a company with its roots in racing and off-road, the KTM is surely a better bike in the loose stuff, but the thumper engine won’t be as relaxing on the bitumen and it costs a lot more.

MAKING IT A TOURER

The Versys X-300 makes a great touring bike and Kawasaki recognises this by offering a range of touring accessories.

First off there’s a pair of Givi-made 17-litre touring panniers. Priced at $726, they are good value, although some might find them a bit small and they’re only rated at 3kg per side. Positives are they use the same key as your ignition, won’t stick out a mile and still give you access to the standard rack to add more gear.

Undoubtedly more popular would be the 30-litre top case priced at $140, which mounts directly to the standard rack.