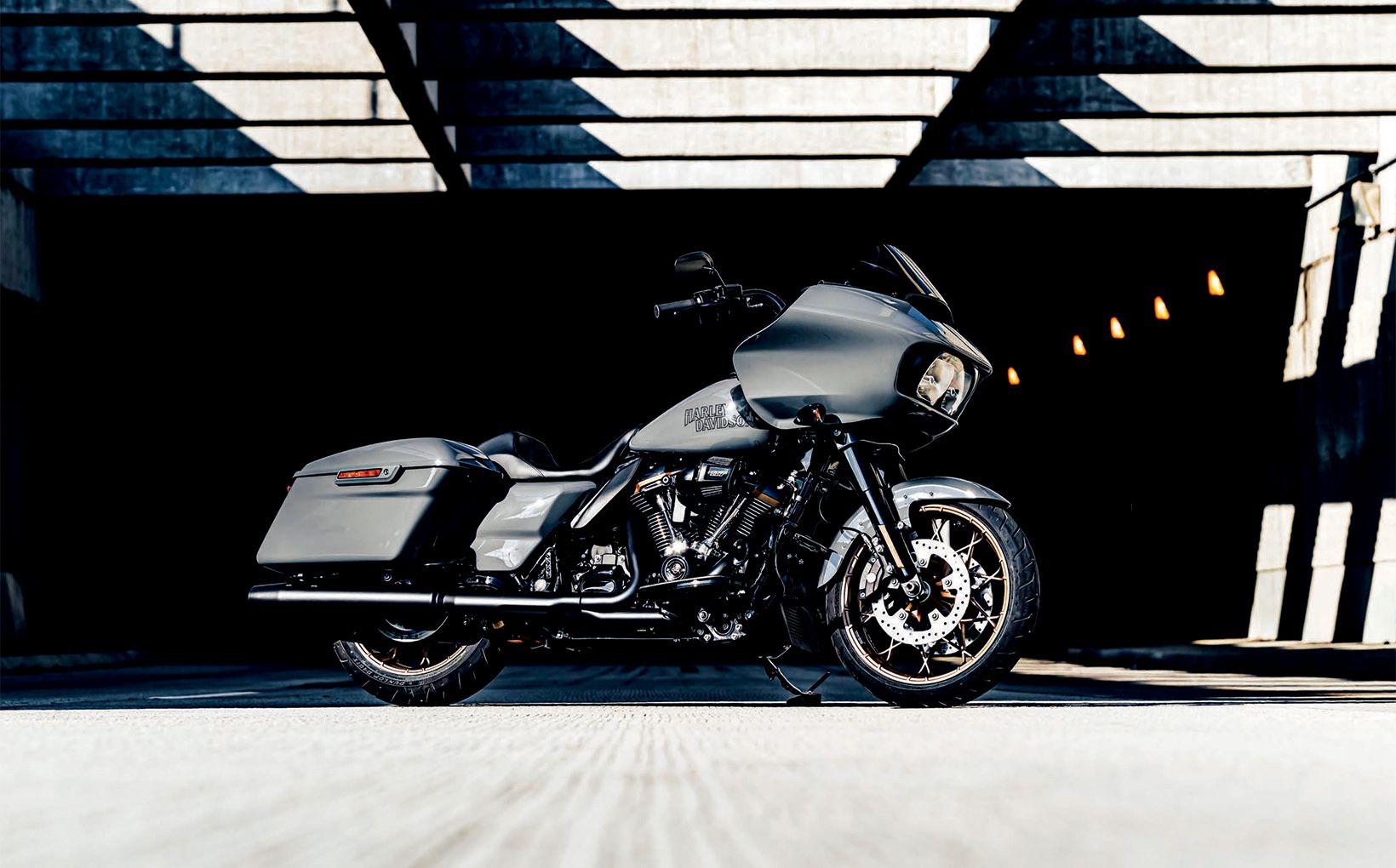 Had it with the spouse? Want something for yourself, to take on the open road, to enjoy the blast of a big American V-twin, to feel the grunt of 172Nm of Milwaukee torque?

Welcome to the ‘Sports Touring’ single-seat bagger, a premium Harley you don’t have to share, the Road Glide ST.

Solo you might not need more luggage capacity than the pair of hard cases mounted to the Road Glide, so you can roll along on one of the most stylish, dare I say ‘minimalist’ Harley baggers ever produced.

Describing a machine of nearly 400kg with boxes and a frame-mounted fairing as minimalist is, well, nuts, but Harley has pared down the machine compared to some of its all-singing, all dancing touring models.

For a start, there’s the lack of a back seat: just a low, thin, scalloped rider’s perch. There’s no top box, the audio system’s aerial has been hidden away, and the fairing screen is small and tinted.

Harley describes the ST as having a ‘sport-touring stance’, which is the Motor Company’s way of saying it’s better at going around corners than its other baggers. And it is. 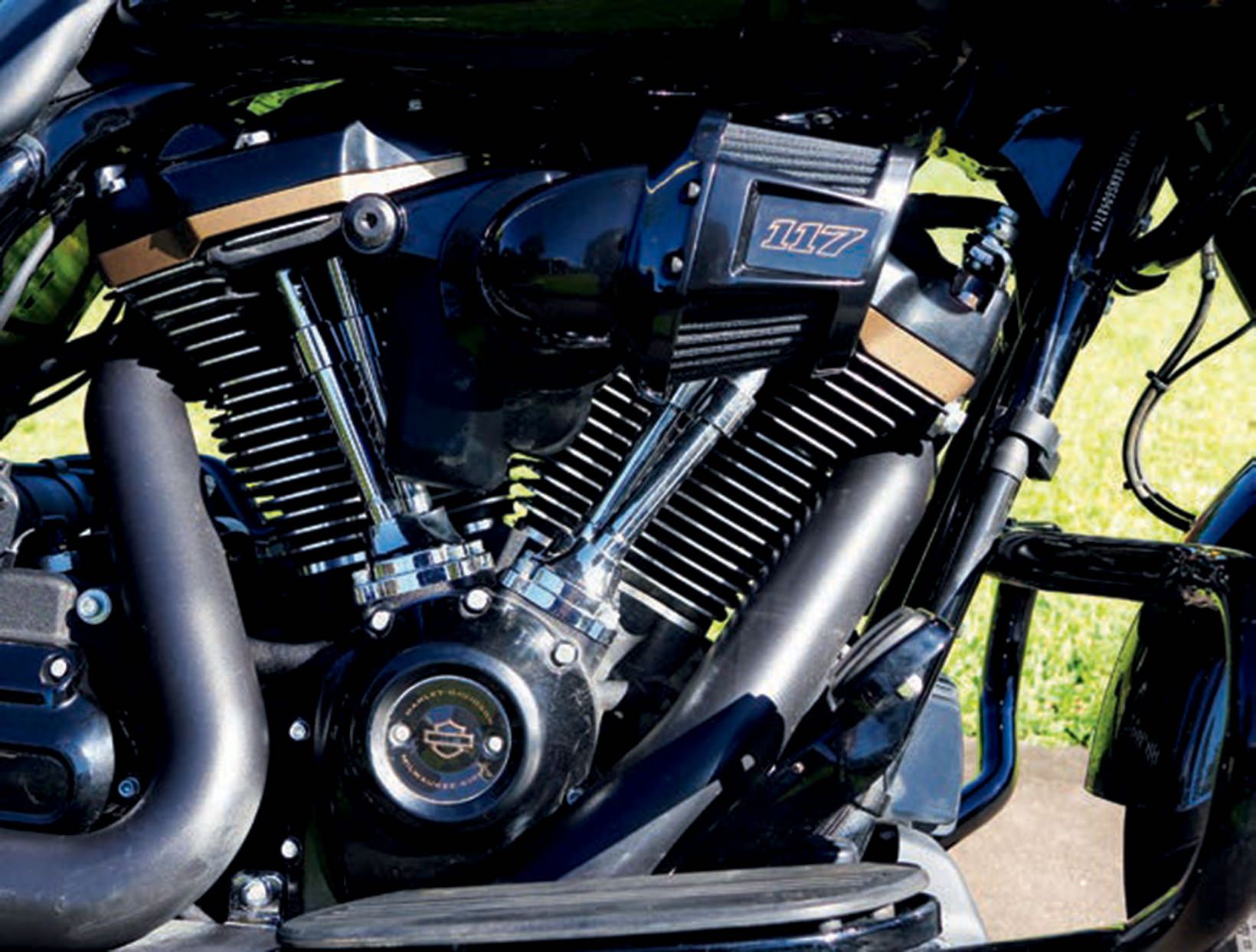 The first time we’ve seen the 117 engine in a non-CVO Harley-Davidson. 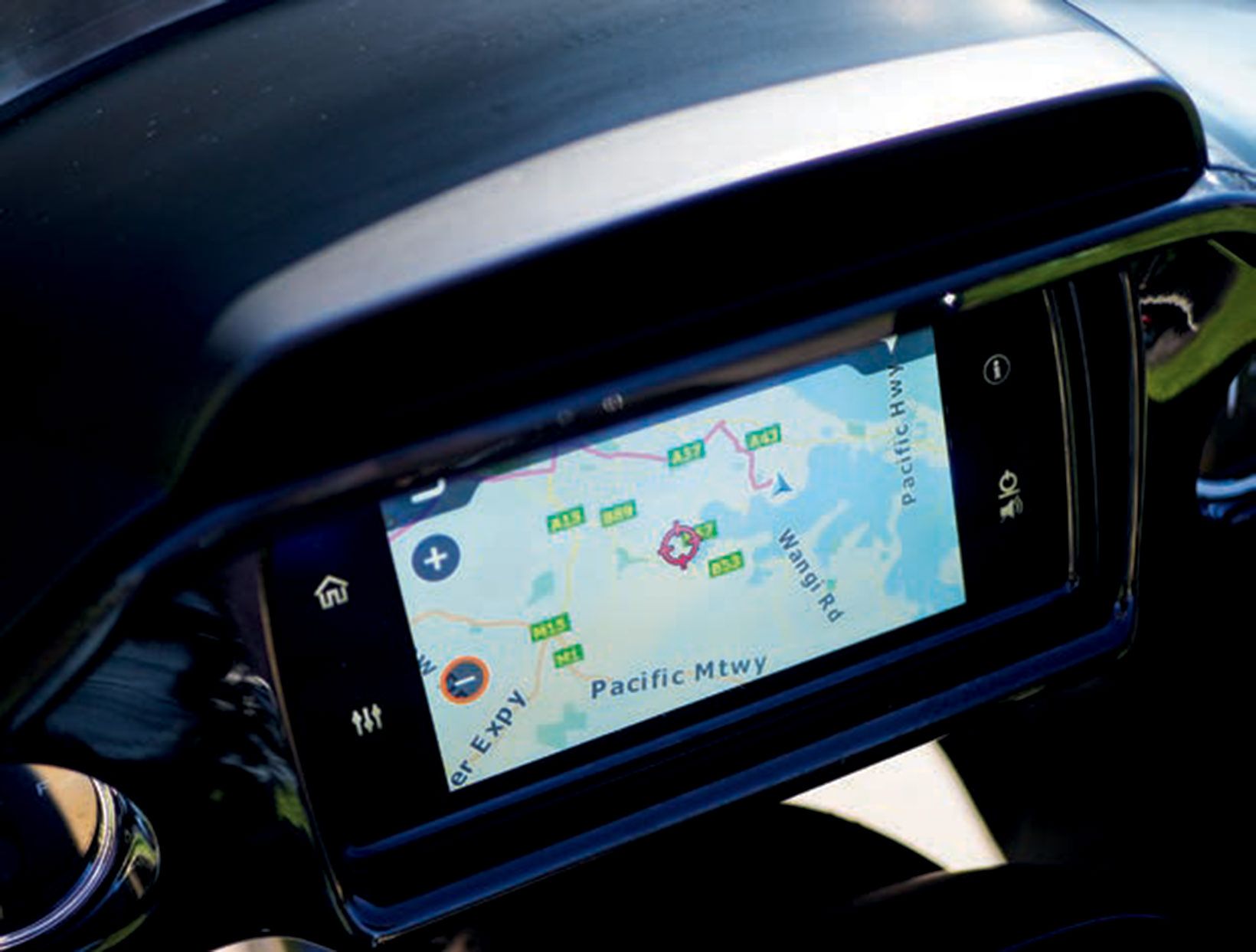 Navigation is via a smartphone App and works very well. 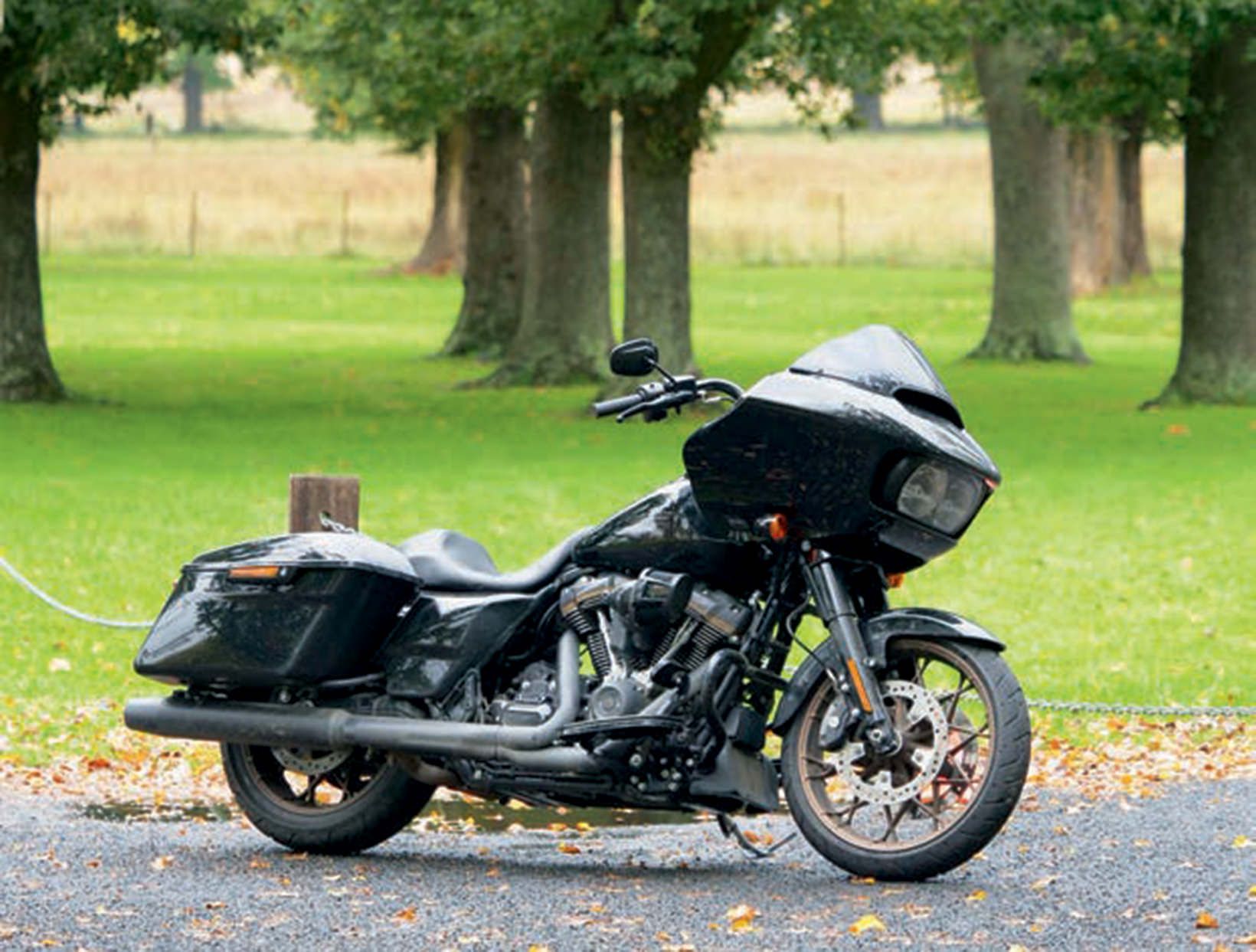 Our test bike came in black, black and black: Vivid Black paint, blacked out engine and exhaust. The cast wheels are bronze, a similar colour to magnesium racing hoops of the 1980s, while bright highlights of the engine — pushrod tubes, tappet covers and machined cylinder fins break up the black colouring. A grey version is the only option to the Vivid Black of the test bike.

Although the styling changes aren’t significant compared to the Road Glide Special, the changes are noticeable. Atop the frame-mounted fairing is a low-profile non-adjustable dark screen, the front guard is shorter and the panniers are standard length rather than the extended versions on the Special, so a little smaller in capacity. A pillion seat is an optional extra.

Choosing the ST over the Special comes at a cost: it’s three grand more than the Special. Those extra dollars are in the performance though, the ST coming standard with the 117 cubic inch V-twin powerplant. That’s close enough to two litres not to matter, a big motorcycle donk, and was previously only available in the CVO models, which cost a lot more.

Feeding the beast is a forward-facing exposed ‘Heavy Breather’ air intake/filter which looks like a high-priced, high-performance accessory, but it’s standard equipment. Given engine breathing on the Road Glide is excellent, I say it works very well indeed, although I did find it to be a touch wide, my right knee often resting on it while riding.

It’s great to see Harley-Davidson publishing power figures these days, for decades the Motor Company simply didn’t — the company claims 106hp to go with the 172Nm of torque. 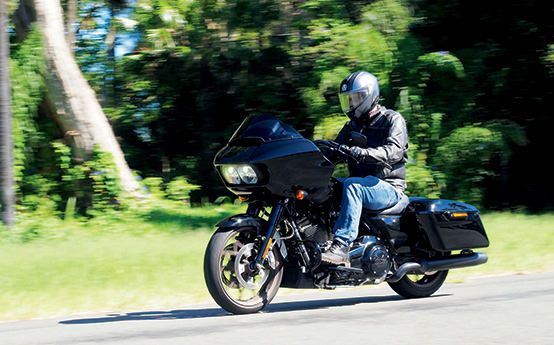 The Road Glide’s Sharknose fairing features triple vents — one either side of the LED headlight and another above. The top vent directed air around my helmet, so I closed it in cold weather, while the other two are permanently open and there to reduce buffeting … but aren’t totally effective when you’re over six feet (183cm) tall. I’d have liked a taller screen, but alas, the lower screen is standard on the ST . In cool or wet weather the ST keeps the worst of the conditions away from your head, chest, hands and shoulders.

Small extensions of the base of the fairing give a little leg protection, but really your knees are left out in the breeze.

The riding position felt pretty natural for a Grand American Tourer. The seat is quite low, so most riders will be able to get their feet on the ground, and the forward-set footboards offer the chance to move your feet around on the long haul for comfort. Unfortunately the big Screaming Eagle forward-facing pod air filter does sit where my right knee wanted to be, making the riding position feel somewhat asymmetrical.

I took the bike up to Byron Bay, riding across some of NSW’s best riding roads, doing my best to avoid the inevitable potholes and road damage caused by the incessant rain and flooding which has smashed the region in 2022. The 19-inch front wheel, fitted for style rather than performance, seemed to cope better with the bad roads I rode, although some of that might also come down to the longer rear shocks.

I was impressed with the way the Road Glide ST performed, offering a comfortable ride, great overtaking performance and predictable handling. It’s the grunt from the 117 cubic inch, 8-valve engine which means it never lacks for performance at highway speeds, overtaking easily achieved with a single downchange, because sixth has the engine spinning very slowly.

Along the Grafton Road, which joins Armidale (on the western edge of the Great Dividing Range) to the North Coast town of Grafton the bike was fun to swing through the sweeping bends, using the mid-range performance of the big V-twin to power between corners. The front suspension is unchanged from the Special at 117mm of travel from the Showa conventional forks. The rear shocks are longer on the ST , offering three inches (76mm) of travel, up from 2.1 on the standard model.

The emulsion shocks are adjustable for preload and are pretty firm — set up for my weight and some luggage the recommendation was very much at the softer end of the scale. Rear suspension performance is definitely improved from the earlier models. 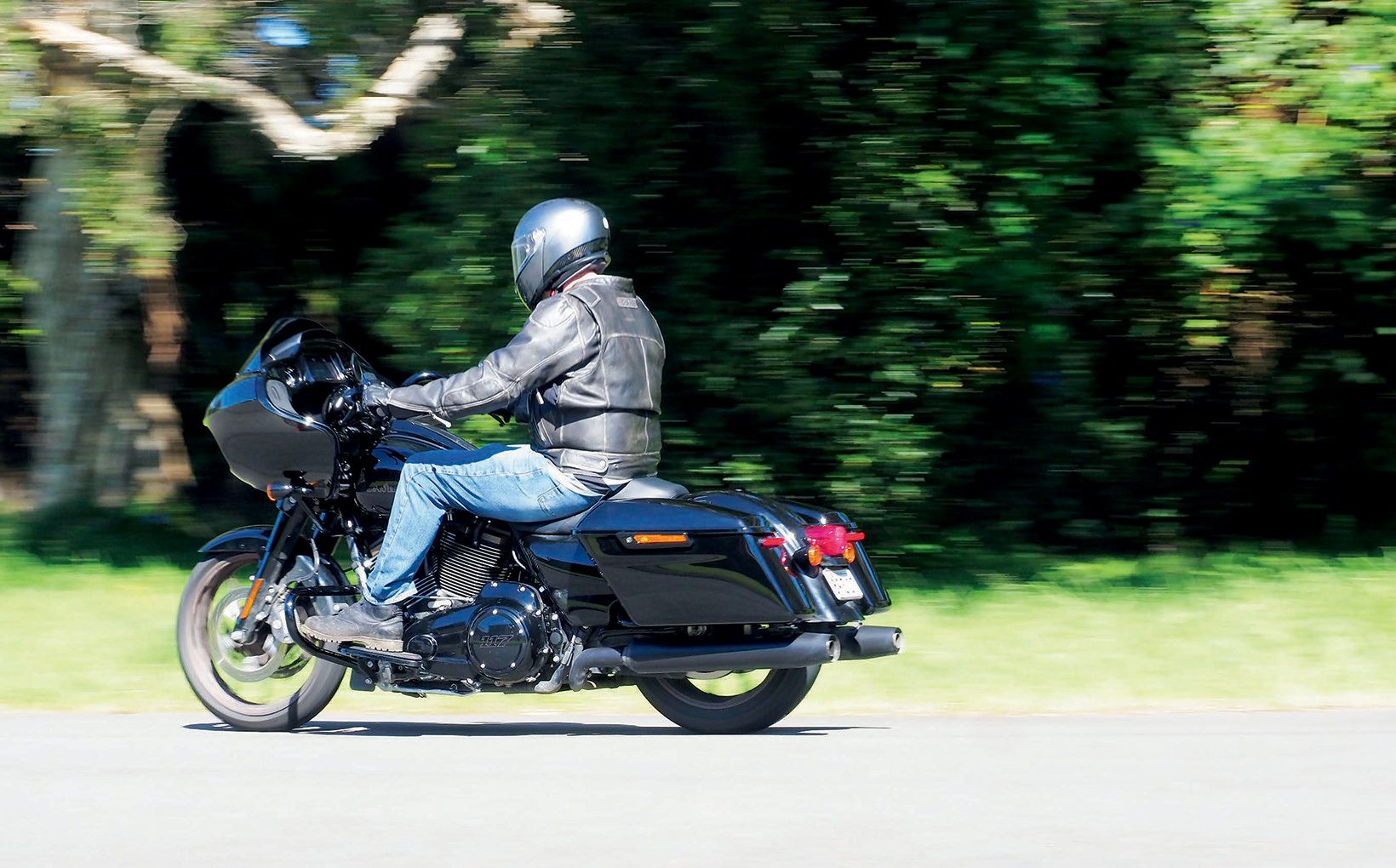 In tighter sections of the winding road the weight of the bike became very obvious, becoming physically demanding to swing from corner to corner and taking effort to haul down from speed. Cornering ABS is standard equipment but it’s a heavy bike with a nonadjustable brake lever. If I hadn’t known the brakes were electronically linked I’m not sure I would have noticed.

Rapid gearchanges aren’t the bike’s forte either, and the heavy clutch won’t be appreciated by some.

Capable it is, relaxing it isn’t, at least not in the twisties.

My return journey was down the freeway, where cruise control, bluetooth audio and the relaxing beat of the big V-twin ate up the miles.

The poor weather meant the bike got dirty but the big fairing kept me warm and dry, although unlike many premium sports tourers there aren’t heated grips, a heated seat or any other winter luxuries as standard equipment.

Back in 2015 I spent a week riding from Milwaukee to New York on an Ultra Limited, which really showed what these bikes are designed for — wide roads at freeway speeds. The Road Glide ST is still good in these conditions, but the changes have made it better than the Ultra in the twisties. 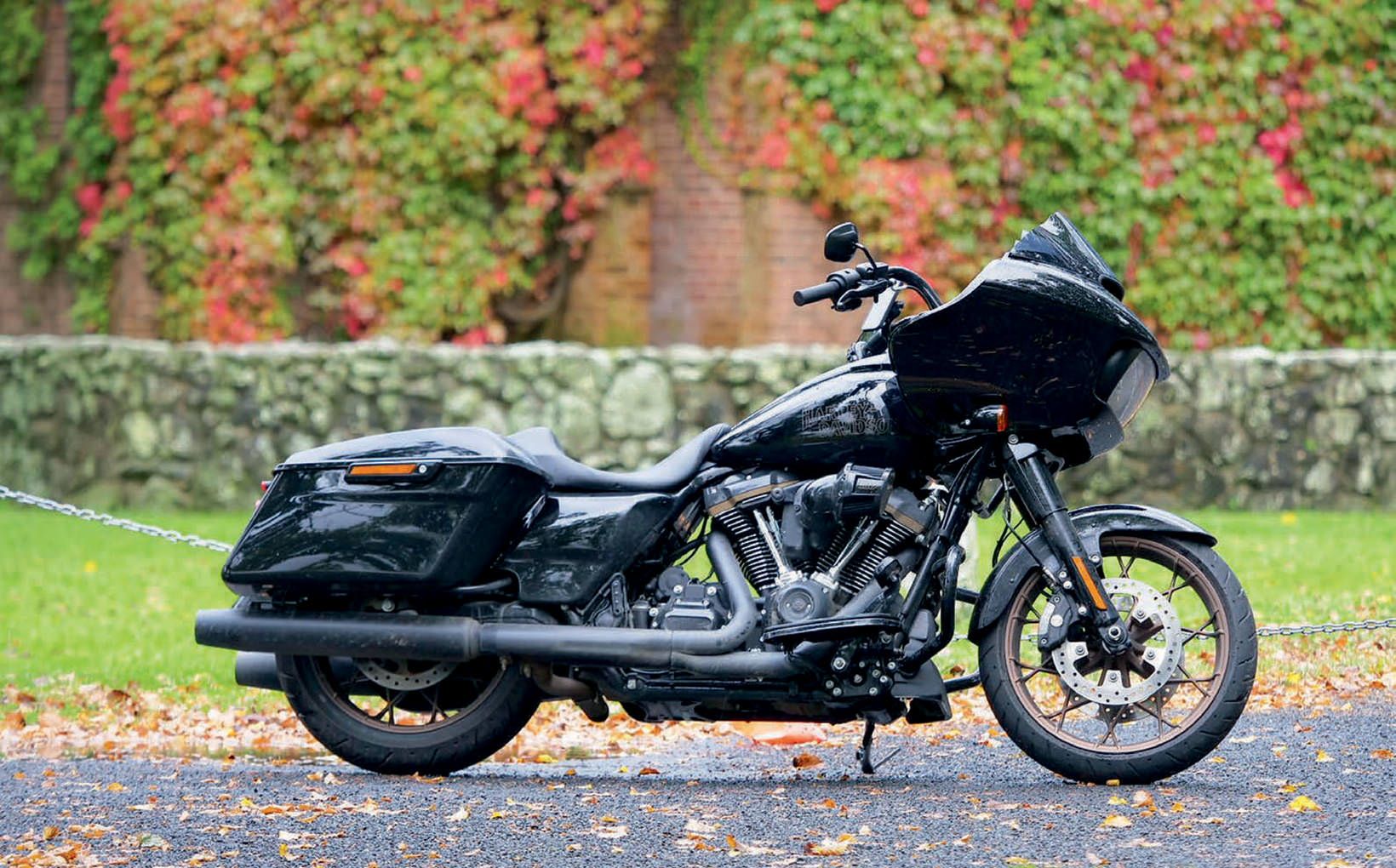 There’s also Apple Carplay and Android Auto, but I couldn’t test those out because neither of my two bluetooth headsets would pair to the bike. Turns out for these systems to work they need a microphone to be recognised, so without a headset, no Carplay.

I think bike manufacturers should install a mic into the dash, not for use when riding, but when stopped … so systems can be configured and calls taken on the side of the road.

Luckily I was able to make a Bluetooth connection to my phone and connect my headset to the phone as well: this meant I could display the track information on the screen and use the switches to switch between tracks — but I couldn’t adjust volume.

Of course I could also play the phone’s music through the bike’s speakers, which was great up to around 110km/h, when the wind noise would be so loud I would no longer be enjoying the experience.

Many riders may prefer to use the right hand fairing compartment for their phone; there’s a USB port there for both power and connectivity to the audio system, but that didn’t work for me. I like my phone on the handlebars, where I used a power plug in the port on the left hand side to keep the phone charged. This port could also power heated gear or other accessories (just be careful not to overload the fuse).

If you own a modern Harley, check out the factory headsets: you can be confident they will work as advertised. Getting third-party equipment to play friendly can be a nightmare.

Navigation is available through the free Harley- Davidson app on your smartphone. It lets you import GPX tracks or plan a trip, which can then easily be wirelessly sent to the infotainment system. Generally I found it to be pretty good, but it does rely on mobile data. 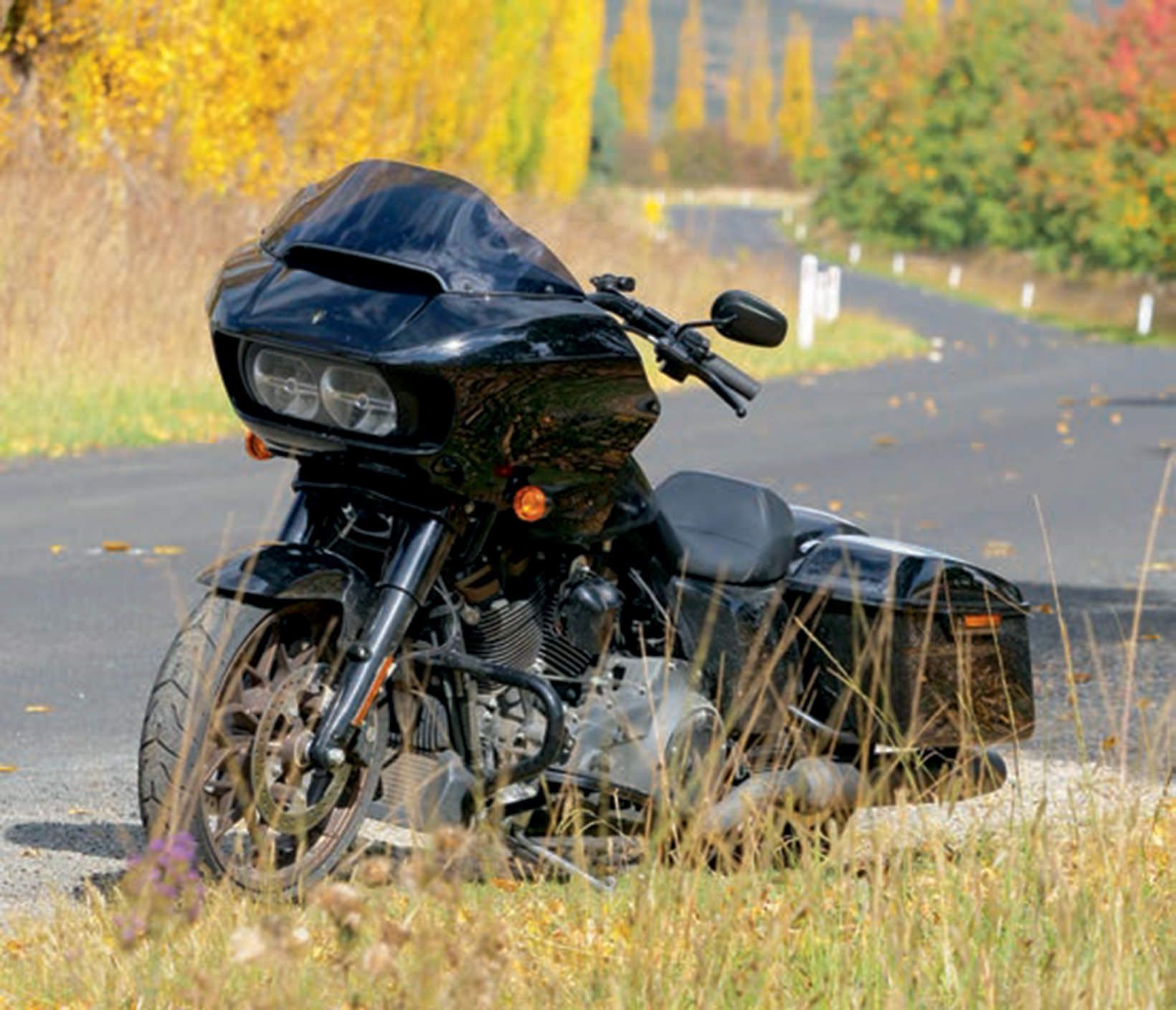 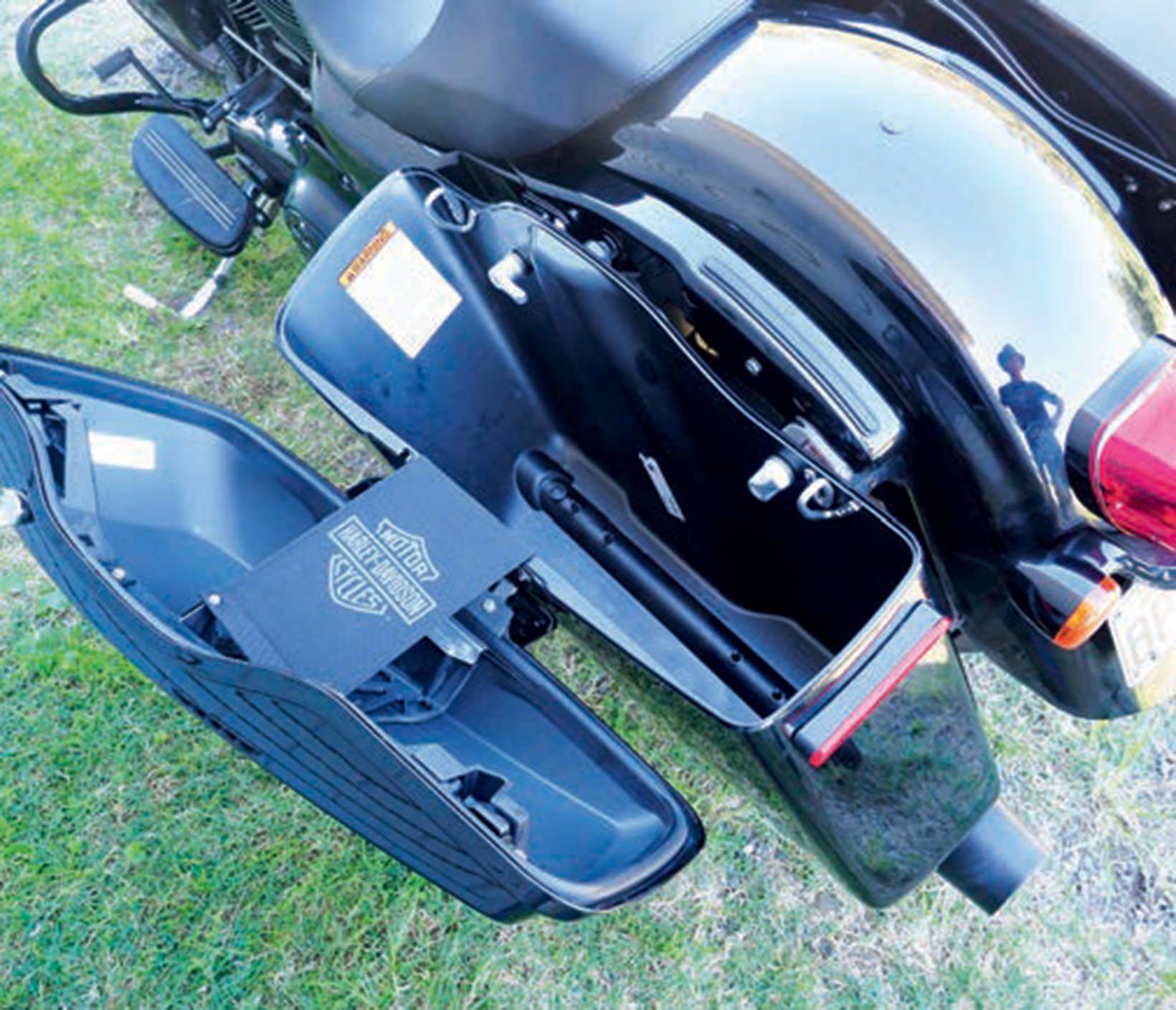 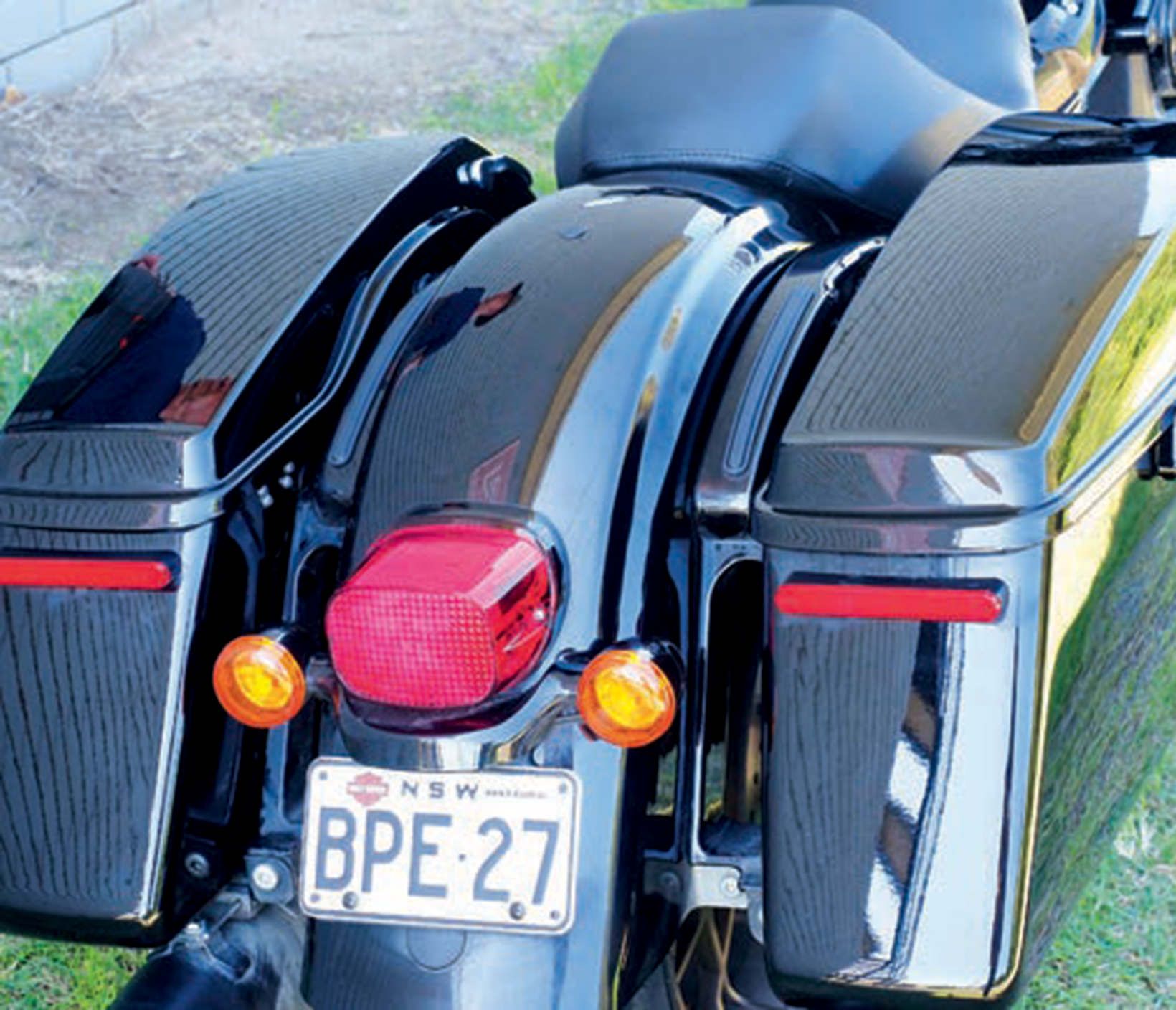 The Road Glide ST is at the cutting edge of Harley performance baggers. The highest performance engine, a design and suspension set-up which makes it fun through the curves, a fairing and entertainment system to keep you comfortable and entertained all day. Harley-Davidson wants you to know the Road Glide ST is closer in performance and handling to European and Japanese sports-tourers, but you must keep in mind it’s an upgraded Grand American Tourer, not a new bike.

Had the Motor Company put the Revolution Max engine from the Pan America in a road bike chassis with a full fairing and belt drive, that might compete against the Europeans and Japanese, but isn’t here yet (I’m sure it’s on the development schedule because it’s such a no-brainer to use the new motor in such a design).

The Road Glide ST is a lot of motorcycle, so while its performance capabilities are stellar against other Harleys, you can buy a lot more power and torque for a lot less money if you step away from the Harley dealer. It’s heavy and the suspension isn’t great, so better cornering is available in many other machines. The bags, which are fantastic to use when you’re on the road, aren’t a great shape and can’t be used to carry your luggage to your room at the end of a day’s riding.

And, without spending more cash on accessories, you can’t take a friend.

All that adds up to a lot of reasons not to buy a Road Glide ST, and that’s OK: Harley-Davidson didn’t build it for everyone, the company built it for the passionate Hog fan who wants more: more performance, more style, more grunt. If that’s you, I doubt you’ll be disappointed. 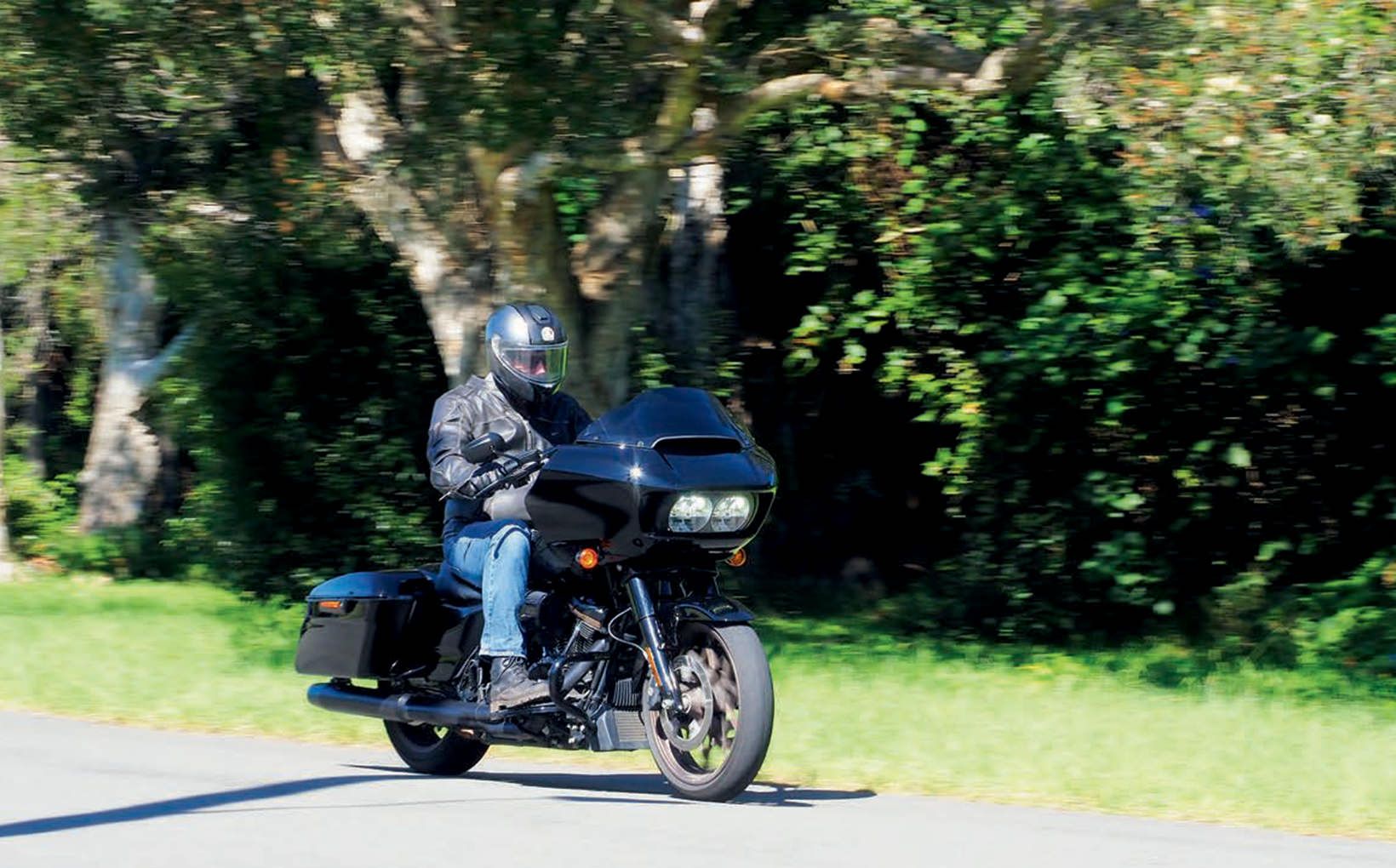