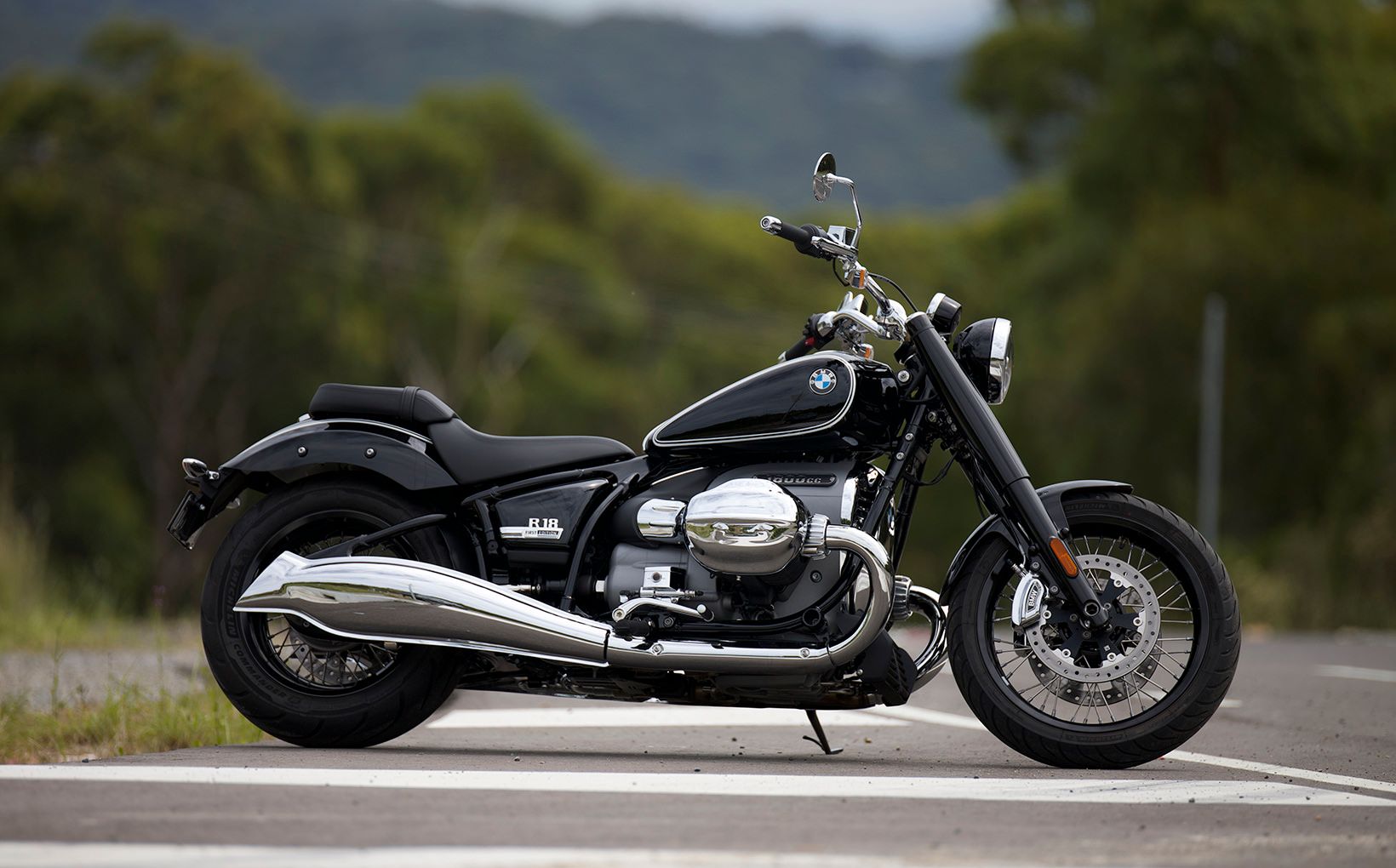 I seek out roads that restrict my speed with their corners. Getting the pace right, exploring the cornering clearance available, feeling the lean angle under your wheels is, to many riders, what motorcycling is all about.

Many cruisers aren’t built for this, however; they have inadequate suspension — both travel and control — limited clearance, pathetic brakes and a riding position not suited to enthusiastic riding. Which made my introduction to the new BMW R 18, a new cruiser at a time when the cruiser market is on the wane, all the more interesting. BMW has a reputation for fine-handling machines and wouldn’t want to tarnish that reputation. So I took the Old Road rather than the freeway. Lots of twists and turns, a low speed limit but a good surface and little traffic on a Thursday morning.

The R 18 didn’t disappoint. Sure, it’s no sportsbike like the S 1000 RR or even as sharp in the handling as one of the heritage R nineT range, but it performs admirably in both engine performance and handling. At manoeuvring speed, the very low centre of the bike, thanks to the Boxer engine, makes for easy handling, while the electric reverse gear (an option fitted to the test bike) is awesome and should be available on many more machines.

Add in gorgeous classic styling, an incredible presence from the massive horizontally-opposed twin cylinder engine and the high-quality black, white and chrome finish and we have a thoroughly modern cruiser that will fool some of the people all of the time. 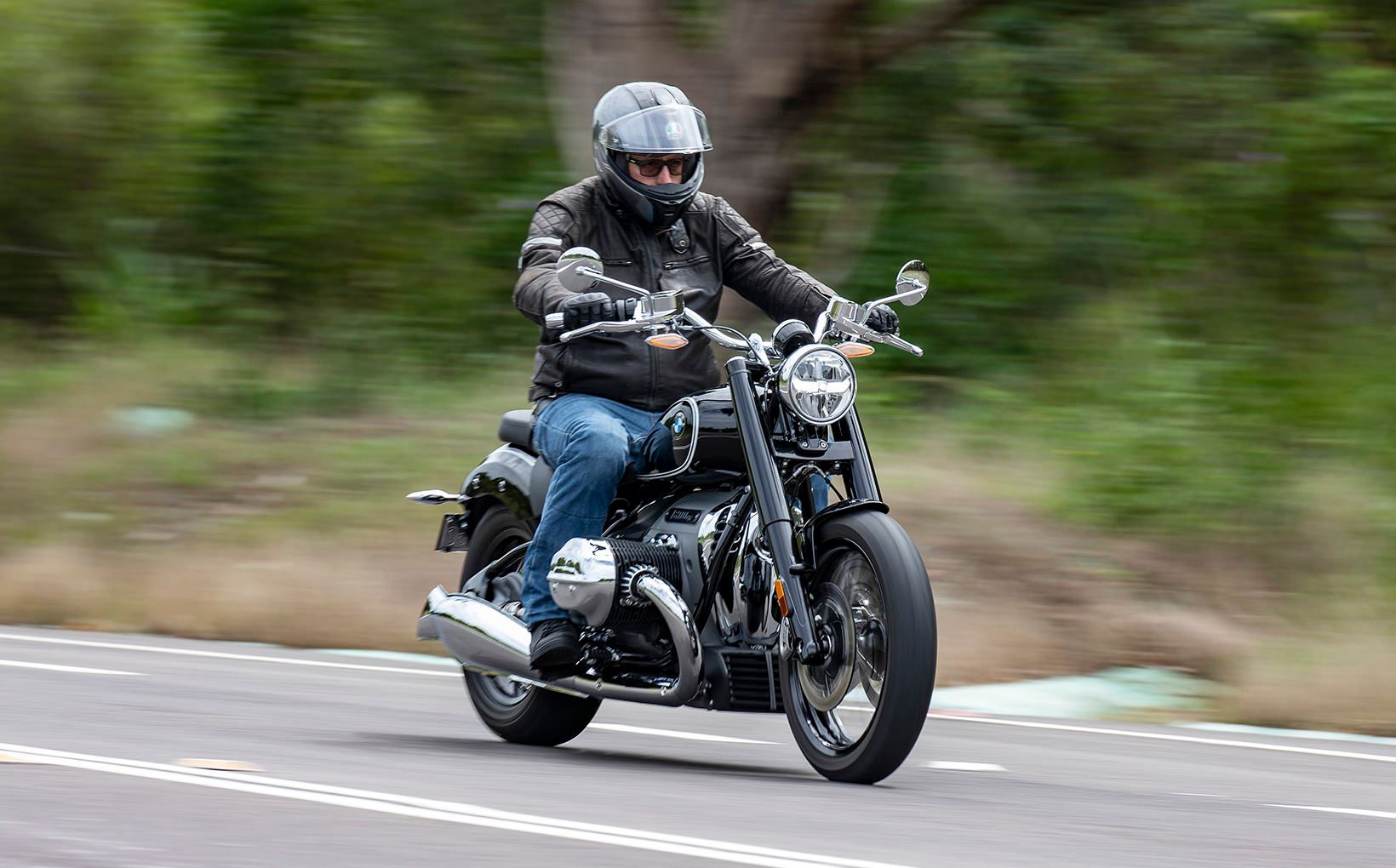 "...we have a thoroughly modern cruiser that will fool some of the people all of the time"

THE MARKET AND STYLE

Who are we fooling? The public at large, of course; motorcyclists will quickly learn the R 18 (and its cousin the R 18 Classic) are brand-new models… but the public won’t know this. You’ll attract former riders and wannabes whenever you park the R 18, and they will regale you with stories of how they, or someone they know, had one “just like this”.

Of course nothing “just like this” has ever existed before. The engine is 50 per cent bigger than the Boxer twins which come before it. The bike itself is bigger and heavier than any naked BMW in the past. While the R 18 might look like something from the 1950s, this is a machine of the 21st century.

BMW has pursued a recipe of classic style built with customisation in mind. There’s a huge range of factory-built customisation options available, many of which are simple bolt-ons. Starting with the laced wheels, they have a timeless style. The fork tubes are hidden behind covers, while the headlight is in a traditional nacelle and the single instrument is a simple pod.

The tank design is heavily influenced by BMW’s machines of yesteryear, while the stock single saddle is cruiser low and blends into the wide, short rear guard. The rear suspension is hidden away, the pipes are massive fishtails, the engine proudly displays its capacity … but there are no technology logos … the casual observer wouldn’t know this bike has anti-lock braking and traction control. If anything was going to give away the game it would be the disc brakes, a pair of modern, large-diameter drilled units at the front and a similar one at the back.

So on the one hand it has good performance and tech, but on the other hand there’s a dearth of modern convenience. You can add options like a passenger seat, reverse gear, heated grips and cruise control, but there are lots of things you can’t have from BMW, like a USB power socket, Bluetooth connectivity or fuel gauge. I think this is deliberate; if you’re riding your R 18, forget the world: switch off and tune out from your job, your family, your responsibilities and enjoy the ride. An R 18 won’t make your problems disappear, but it could make them easier to live with. 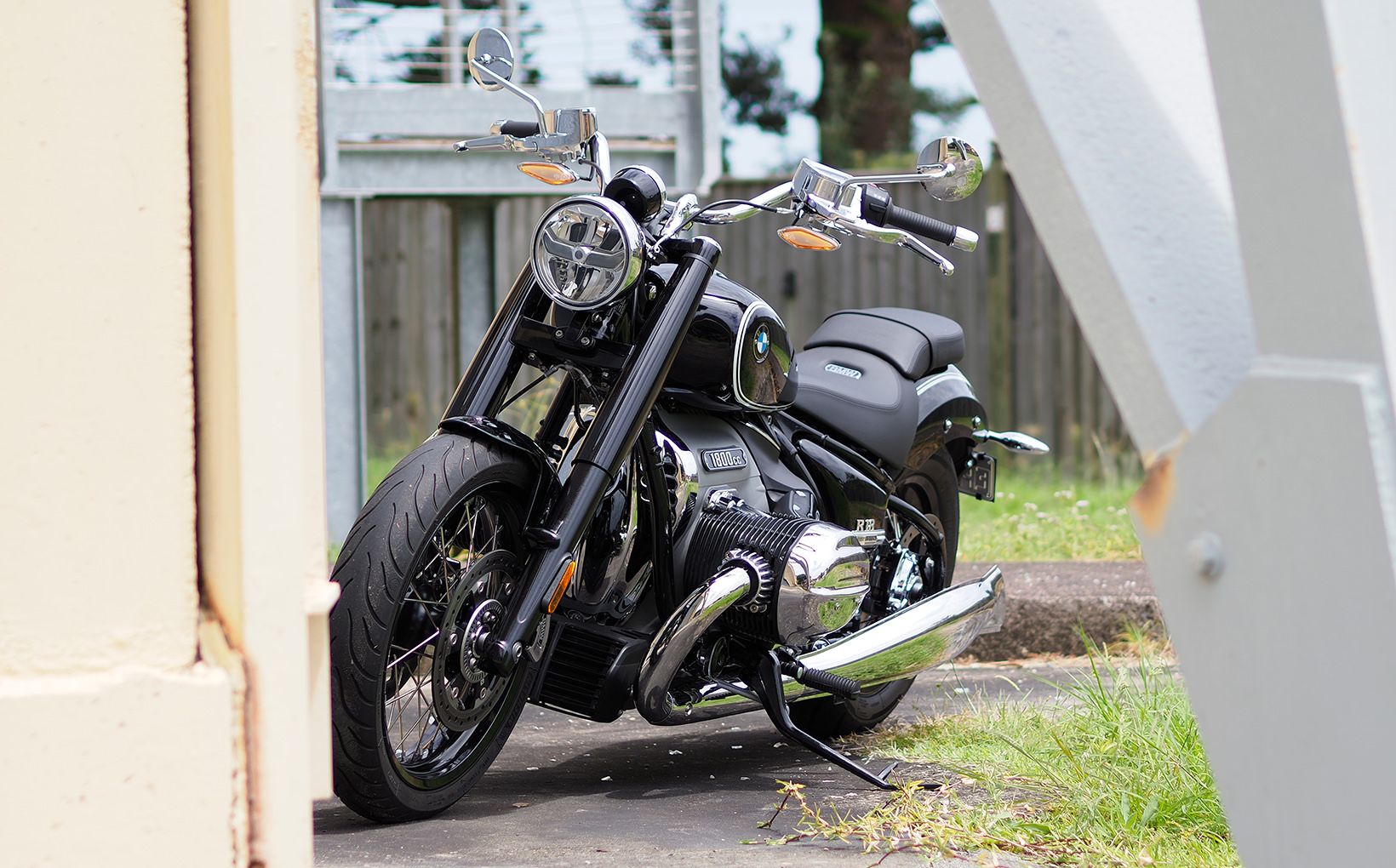 You usually can’t see your engine when you ride. On the R 18 it dominates your perspective. Sitting back in the low cruiser seat, the massive air-cooled pots are always in your peripheral vision in a way they aren’t on any other BMW.

It’s a wonderful engine. It thumps, it oscillates, it even barks a little, and you always know you have one of the biggest engines in motorcycling underneath you. Blip the throttle with the clutch in and the bike twists to the left as the big pistons and heavy crankshaft spin faster than the transmission… that’s what you get with the crank running lengthwise to the chassis. My old Moto Guzzi did the same thing, while more recent BMWs don’t so much, because BMW has managed to largely tune it out of the smaller motors, but not in the 1800. It’s also refined, both in the quality of finish, smoothness, excellent clutch and gearbox… right through to the exposed drive shaft and universal joint.

At 1802cc it’s the largest BMW Boxer twin ever produced, and probably by a big margin. Convert 1802cc to imperial and you get 110 cubic inches, which is about the size of all the big twin cruisers these days — Harley-Davidson engines are generally 107 to 114cu, Indian 111 to 116cu.

The Japanese have effectively abandoned the big twin cruiser market, with only the Suzuki M109 offering an engine anything like the size on the R 18. Triumph does things a little differently with the 1200cc Bobber and 3-cylinder Rocket. 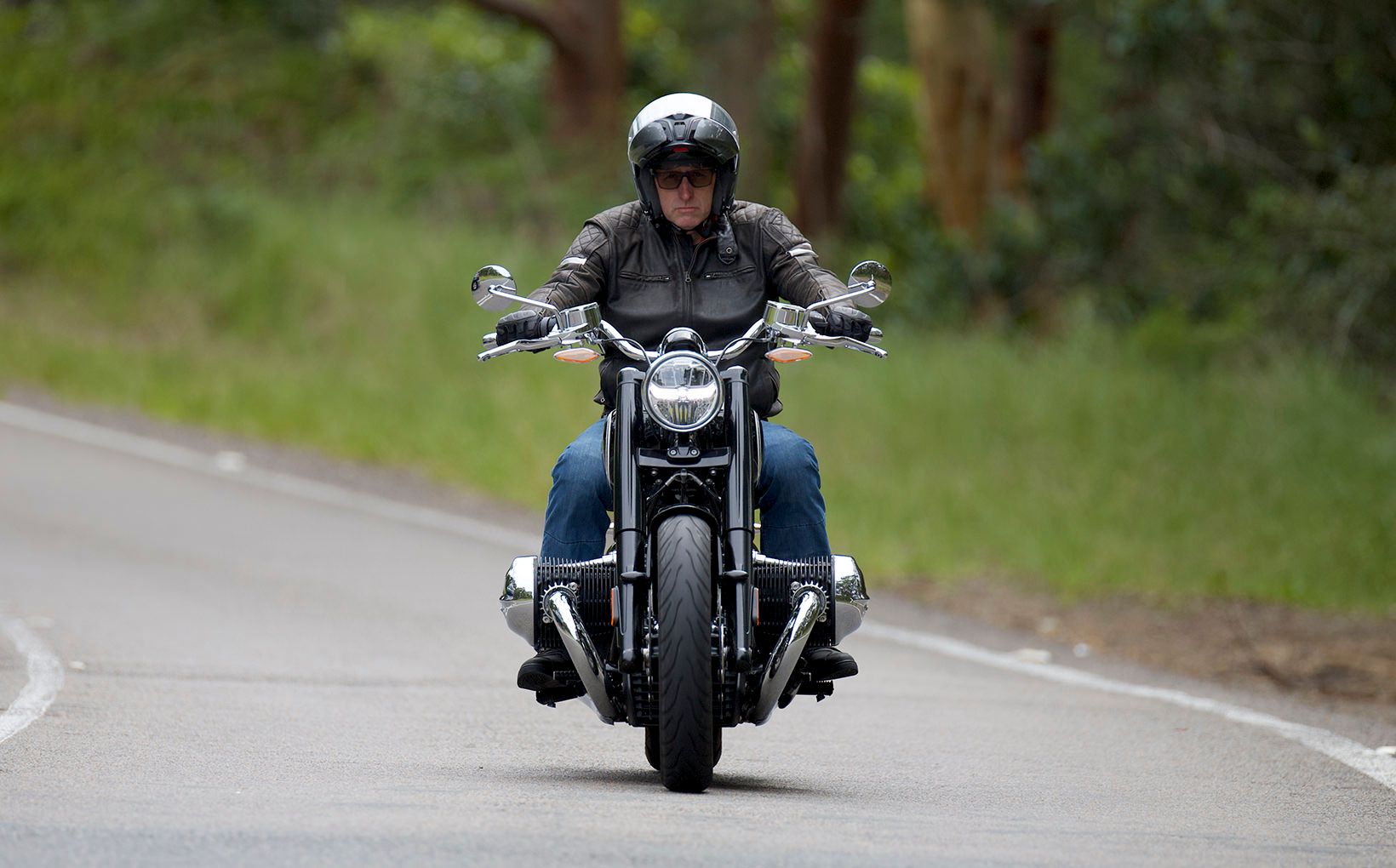 There is a heap of grunt available from the R 18’s big motor. It likes to be spinning at a couple of thousand revs before you really crack the throttle or you’ll get lots of shakes with little forward momentum as those big pistons try to build speed, but over 2000rpm she lifts her skirt and boogies.

Cruising, what the R 18 is built for, is relaxed and comfortable, the engine gently throbbing away at highway speeds, allowing you to relax and enjoy the ride. Sticking a pot out each side makes for a low centre of gravity too, so I had little trouble manoeuvring and doing U-turns, while the electric reverse — similar in function to the unit on Honda’s Gold Wing — makes going backwards easy (although the low seat makes getting both feet on the ground simple too, so it’s easier to push backwards than you might expect, although having reverse will make selling the bike easier in the future).

The sound of the bike is pretty unique, the stock pipes providing a nice note, especially when the throttle is fully open. It’s still very much noise law restricted, of course, and a more open set of pipes will probably sound great. 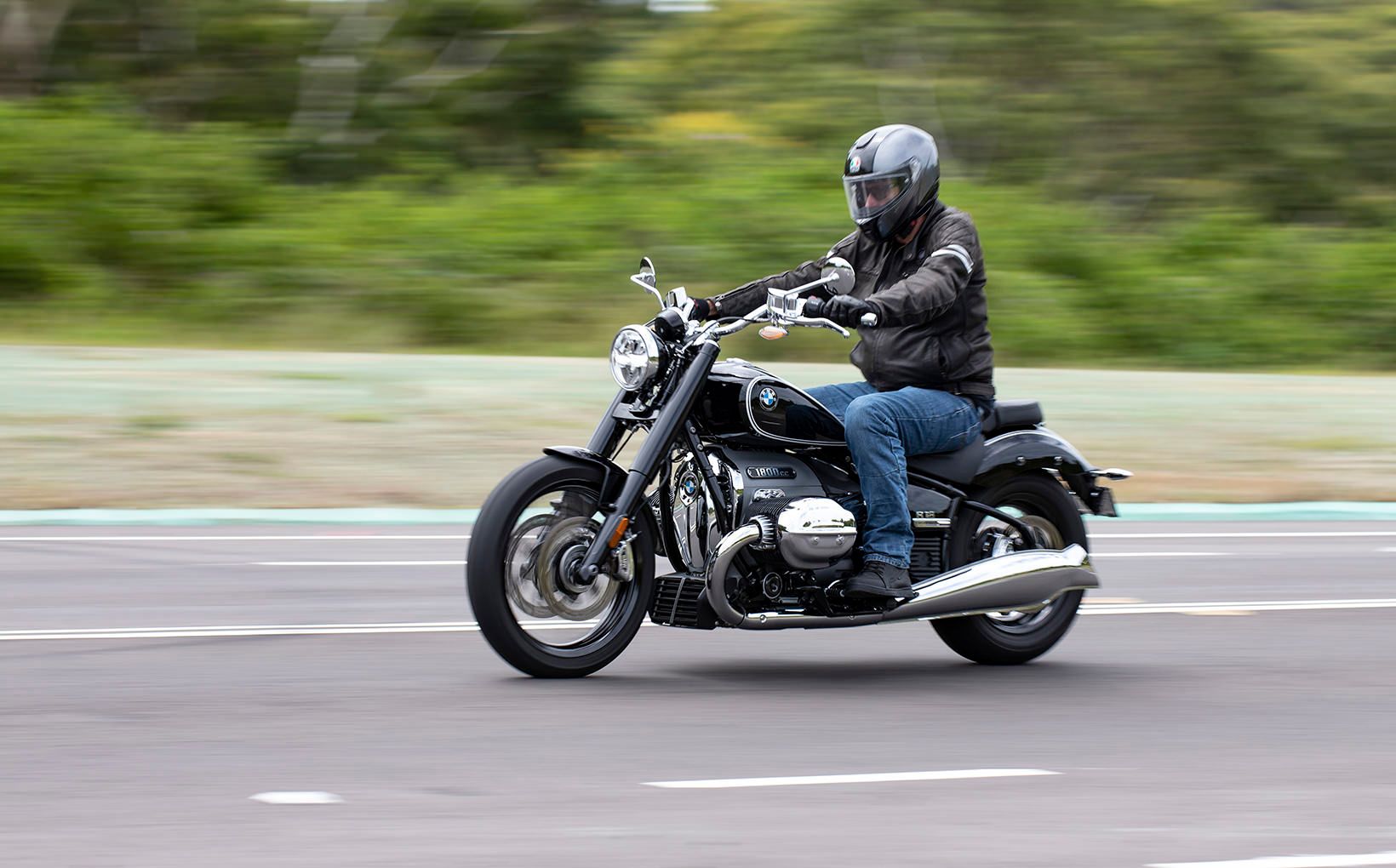 A double-loop steel chassis supports the big boxer engine while a cantilever arm from the swingarm enables the single rear shock to be hidden under the seat for a hard tail look.

A very traditional chassis design by style, the R 18’s frame is perfect for the job — looking good, providing decent handling and being the platform for customisation.

Up front is a 19-inch wheel, at the back at 16 with a reasonably fat 180-section rear tyre. The forks are conventional, non-adjustable telescopic units encased in sleeves, and they are fine. Nothing special, but no dramas, and they offer a reasonable 120mm of wheel travel. The single rear shock, hidden under the seat and connected to the swingarm via a cantilever set-up, only manages to provide 90mm of wheel travel.

On Australian roads, I’d argue that’s not enough — you feel many of the bumps, large and small, and you run out of cornering clearance quickly, partly because the good handling inspires you to ride maybe a little quicker than on other cruisers. A longer shock with a spring rate to suit your riding, the loads you carry and the way you ride would probably improve the handling, comfort and cornering clearance.

Which brings me to the footpegs… I bent the right-hand footpeg mounting bracket when I hit a cats eye while cranked over. The footpeg was unable to move up and back out of the way because they only fold up instead of up and back. They fold up because you can mount the optional footboards, not up and back like conventional pegs. In normal cornering they will fold up, but when struck from the front they have nowhere to go and the bracket got bent.

Your new R 18 will roll out of the showroom with a pair of beautiful laced wheels, a 19-inch front and 16-inch rear. Attached to those wheels are some of the best heavyweight cruiser motorcycle brakes in the world. While the rear brake is very good, the front brakes are excellent for this class of motorcycle, with plenty of power and feel, limited only by the high weight they are trying to stop. 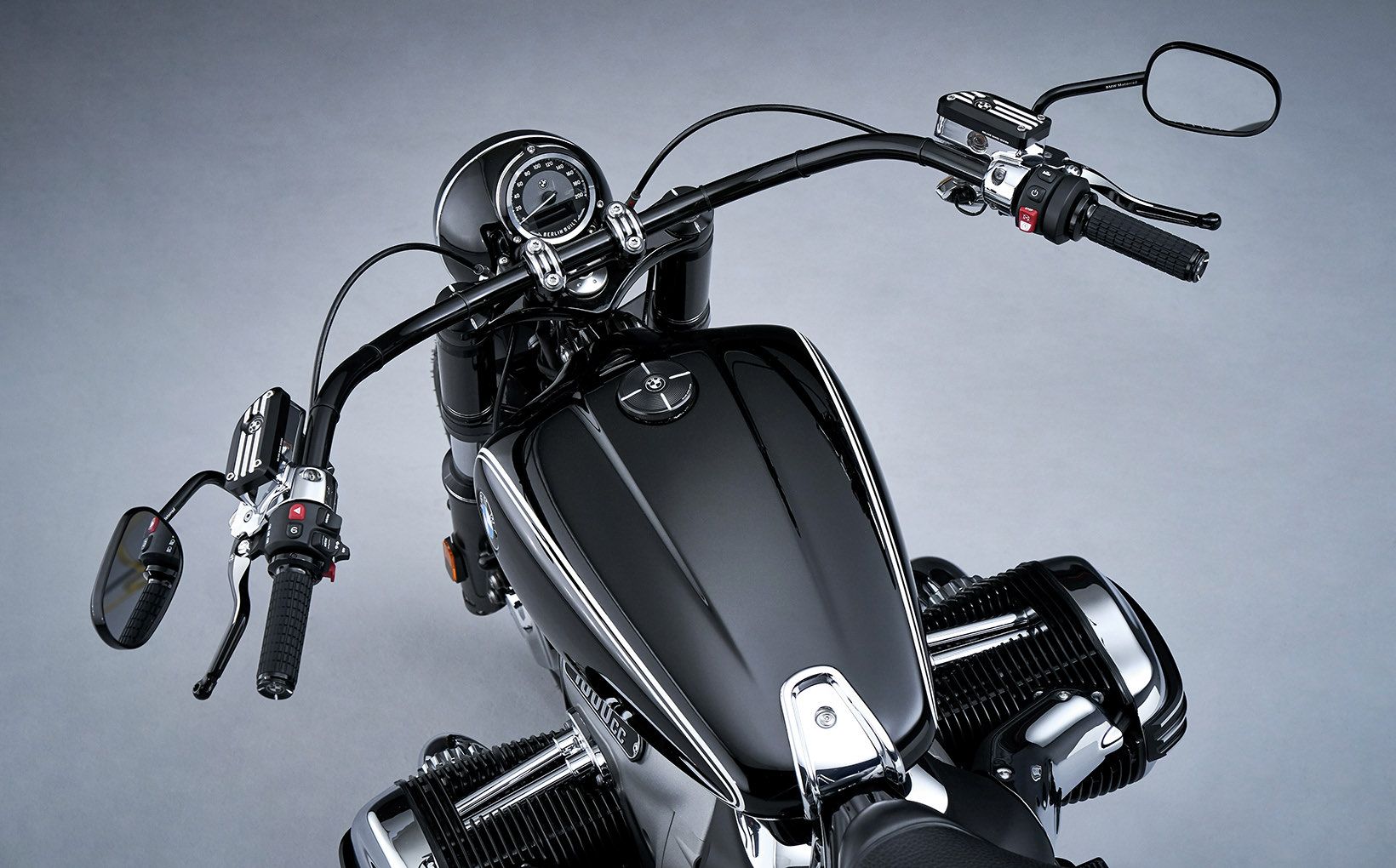 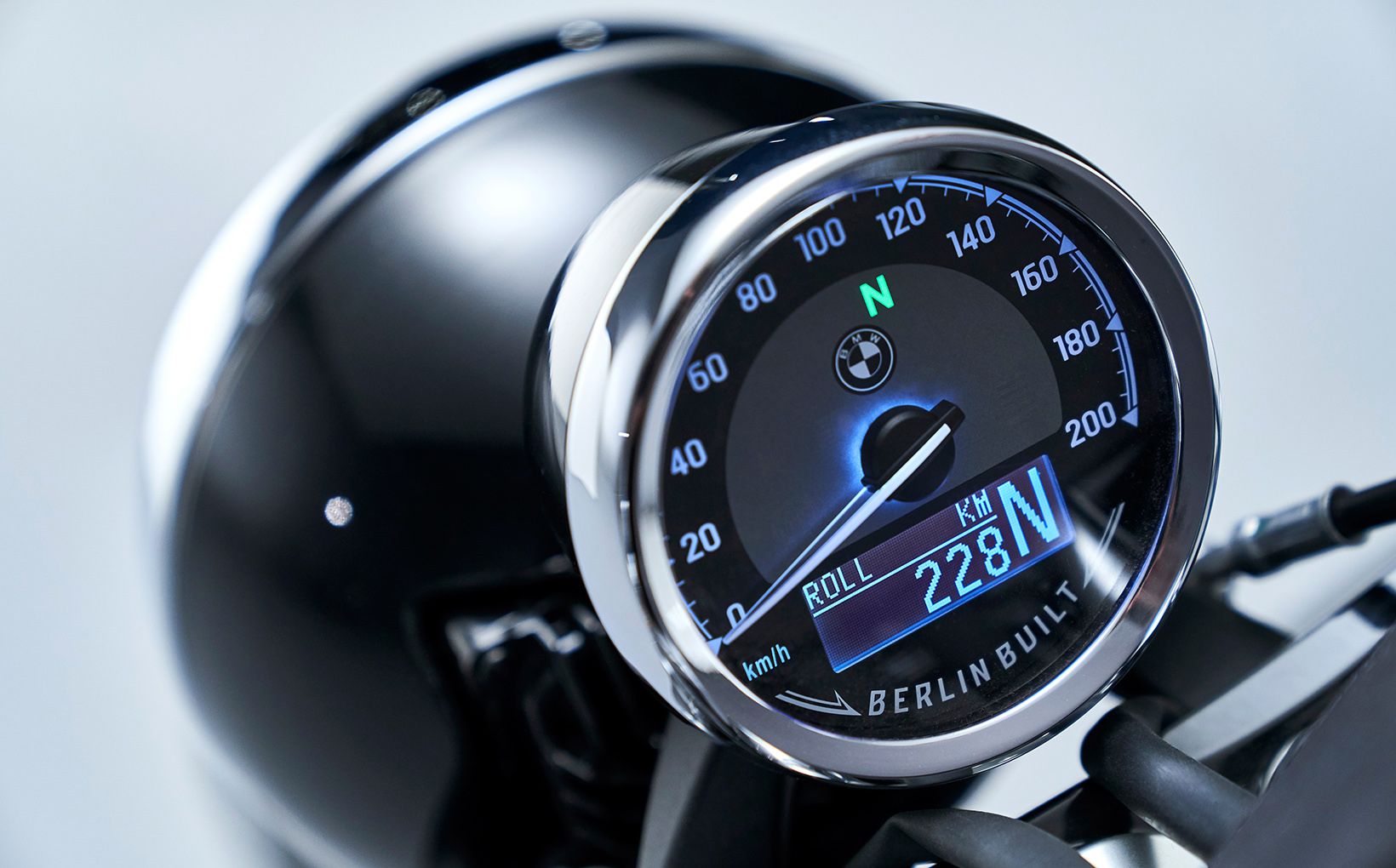 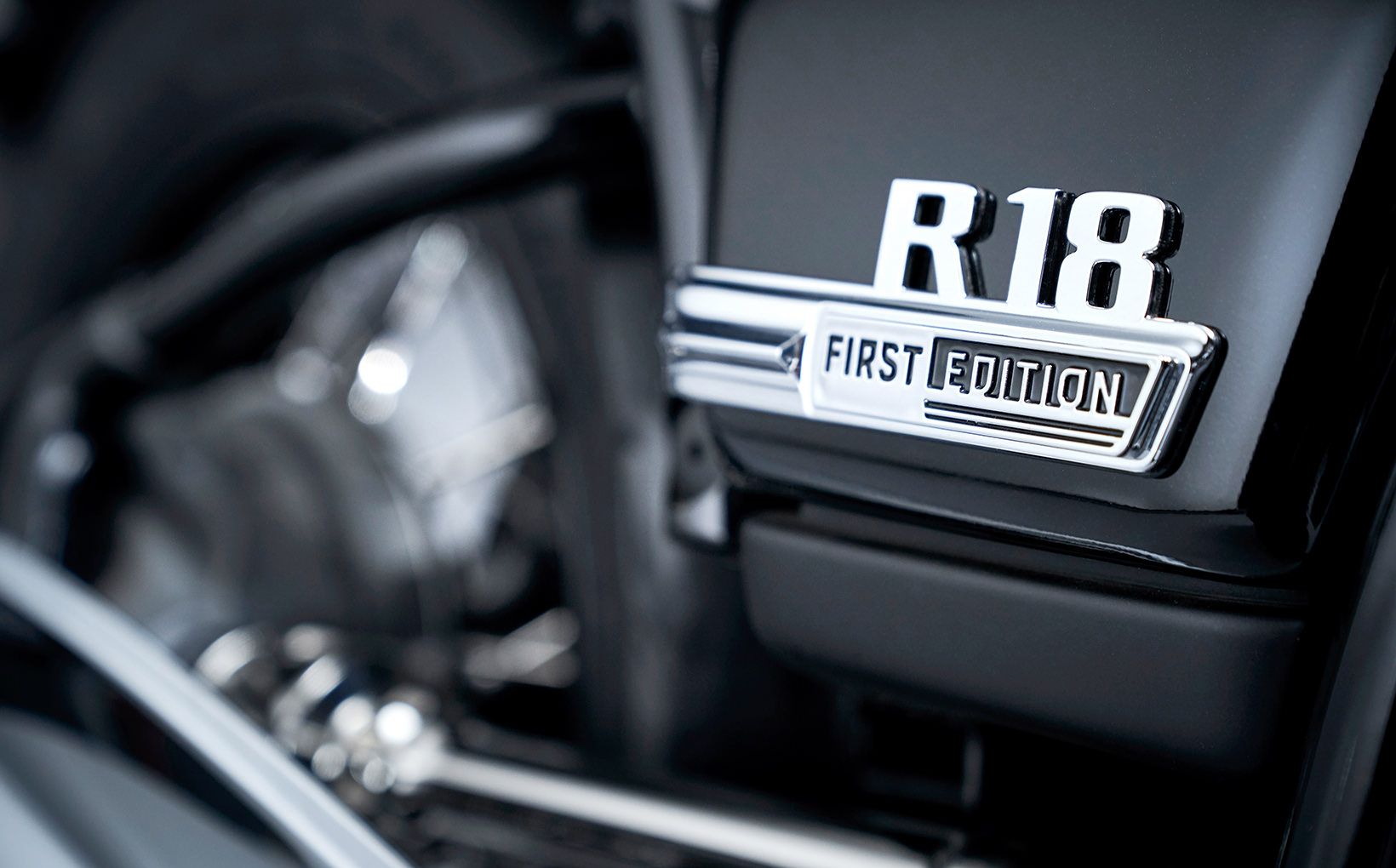 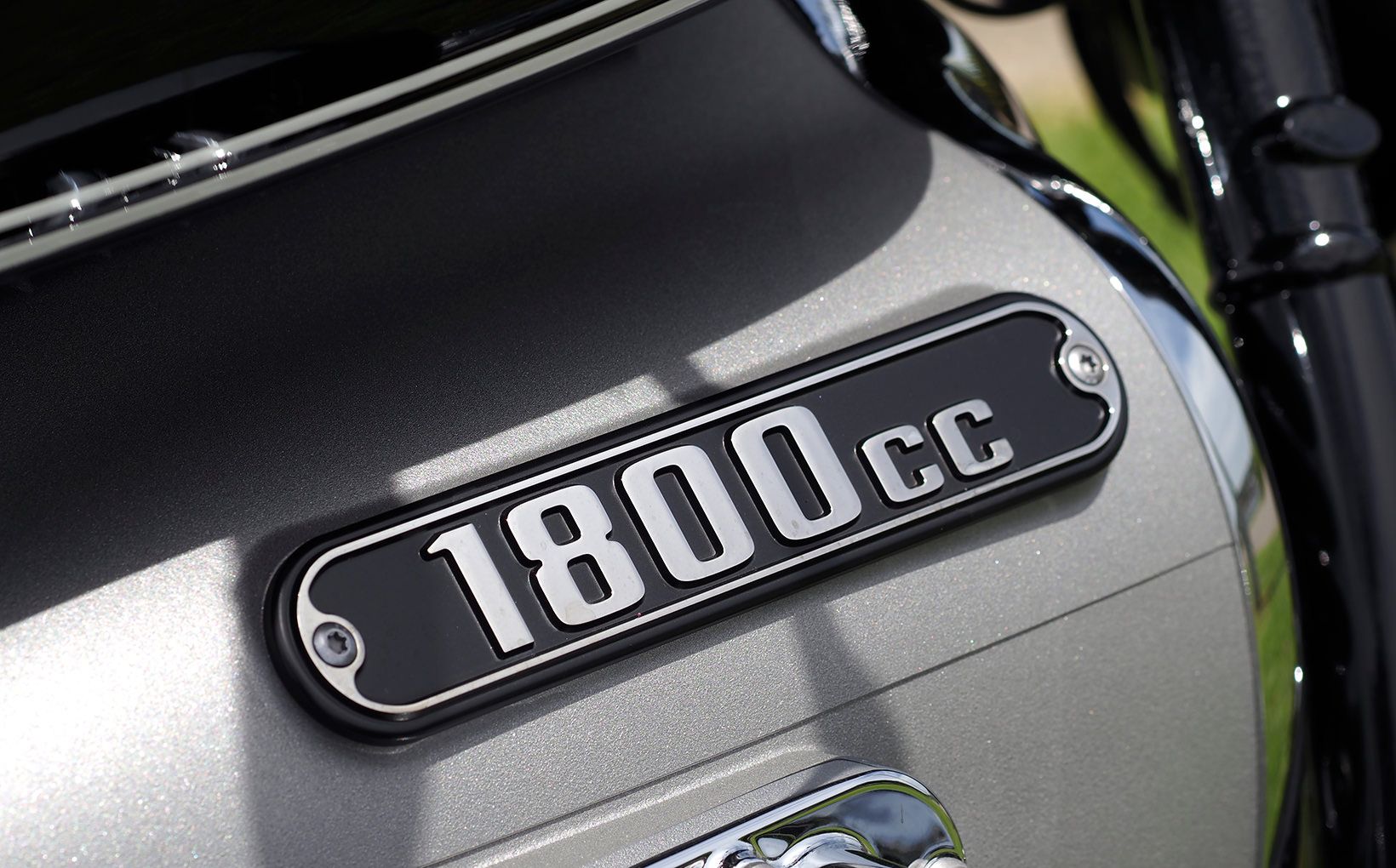 BMW Motorrad will enter the premium cruiser segment in style with local introduction of the first-ever BMW R 18 in Q3, 2020. Made in Berlin, and proud of it. Buyers of the first batch will receive unique badging. BMW R 18 First Edition

Yeah, there isn’t much in this section, not even a pillion seat. No USB ports, no heated grips, no cruise control, no luggage. Did I mention there’s not even a pillion seat? There was on the test bike, but it’s an option, and the rear footpegs weren’t fitted. You do get a keyless ignition system, but it doesn’t lock the steering — that’s done by turning a key near the steering head, just like people did in the mid 20th century.

So on the one hand the bike seems poorly configured, but on the other you only have to buy what you want, and if you’re going to hit the customisation trail you don’t want to start ditching a bunch of things you’ve paid for and didn’t want. Which is why, I think, BMW left so many things on the options and accessories list. Keep the bike basic and let the customer choose what they want. I can respect that. 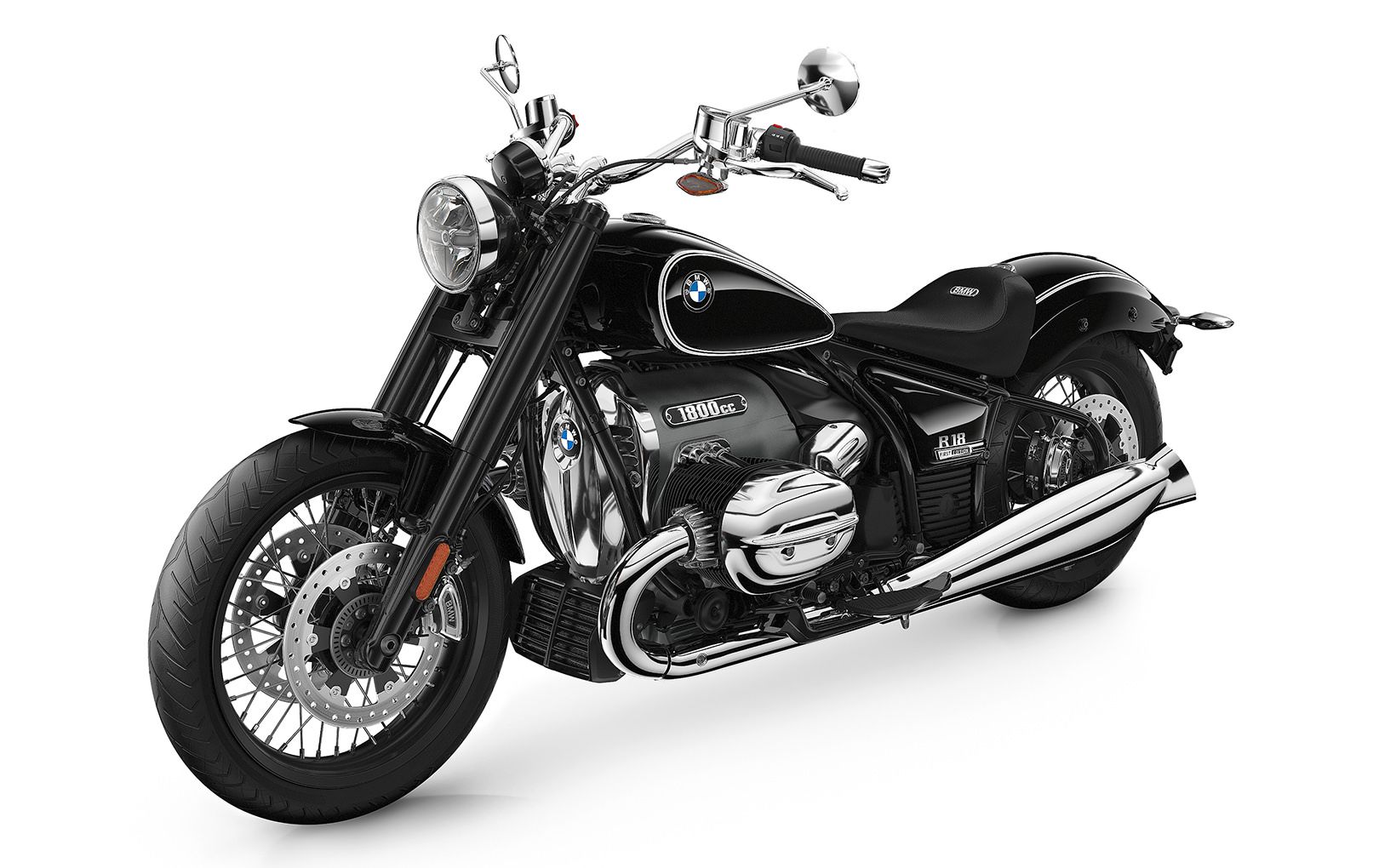 WHO IS IT FOR AND CONCLUSION

The BMW R 18 is a good motorcycle, not just a good cruiser. It handles well, it goes pretty hard and it stops sharply when required. There’s tech inside, hidden under classic styling. It’s a heavy-weight machine with a big thumping engine producing a glorious torque curve that makes it really easy to sit back, enjoy the ride and the scenery.

I don’t think too many Harley buyers will want to own a BMW, no matter how good it is. Most buyers will be riders who don’t want the baggage that comes with owning a Harley, yet still want a big cruiser.

in Europe thanks to its low centre of gravity, decent suspension and easy handling, characteristics required of the old cities in the continent. It might do OK in America, because there may be enough people wanting something different, and Built in Berlin is certainly that.