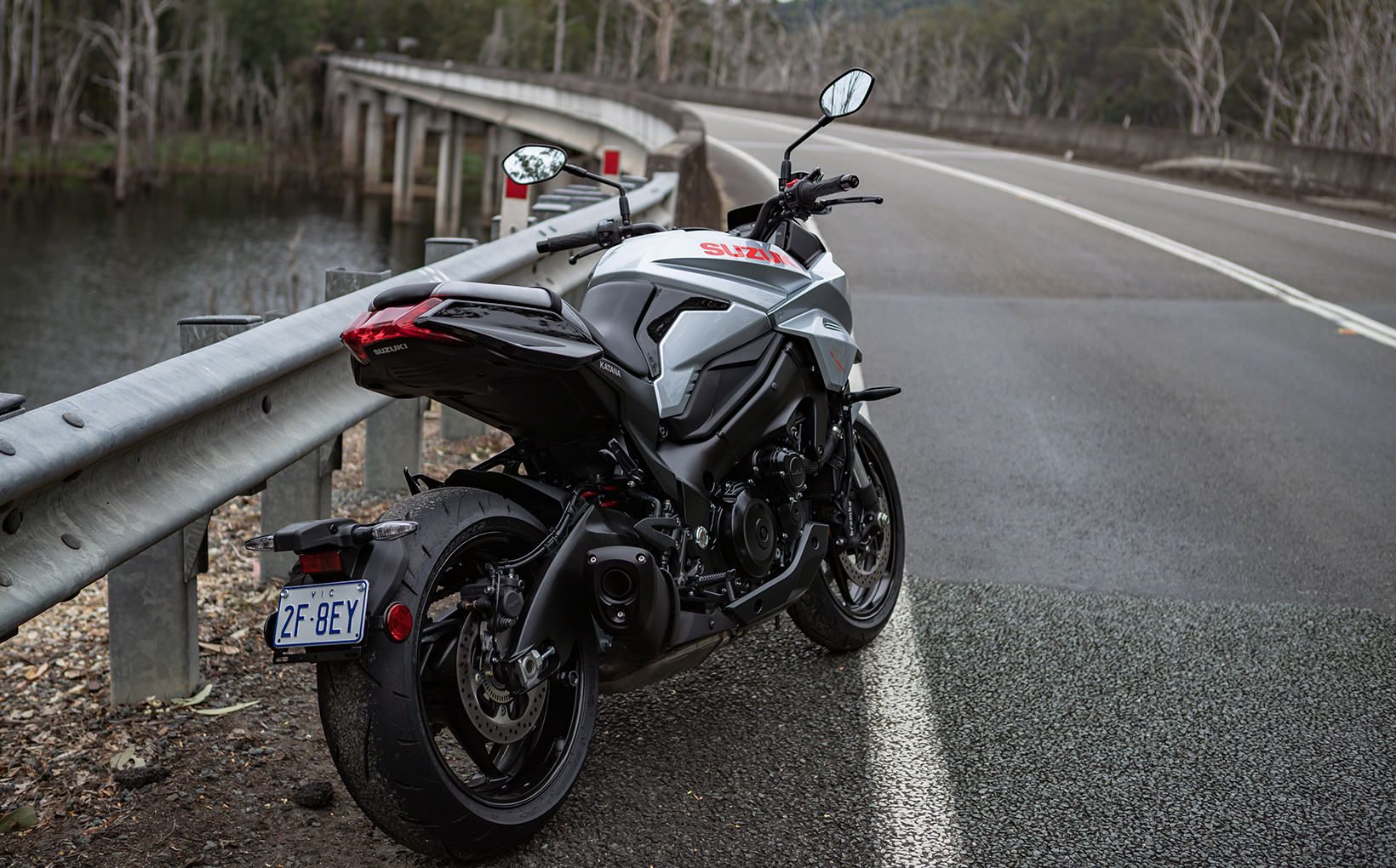 It’s Suzuki’s neo sports machine, an old name with updated style wrapped around a long-stroke Suzuki in-line four-cylinder sportsbike engine. Designed more for cities and weekend fun than tracks or touring, the 2020 Katana makes a lot of sense these days. It’s sporty but comfortable, good-looking but practical — to a point. 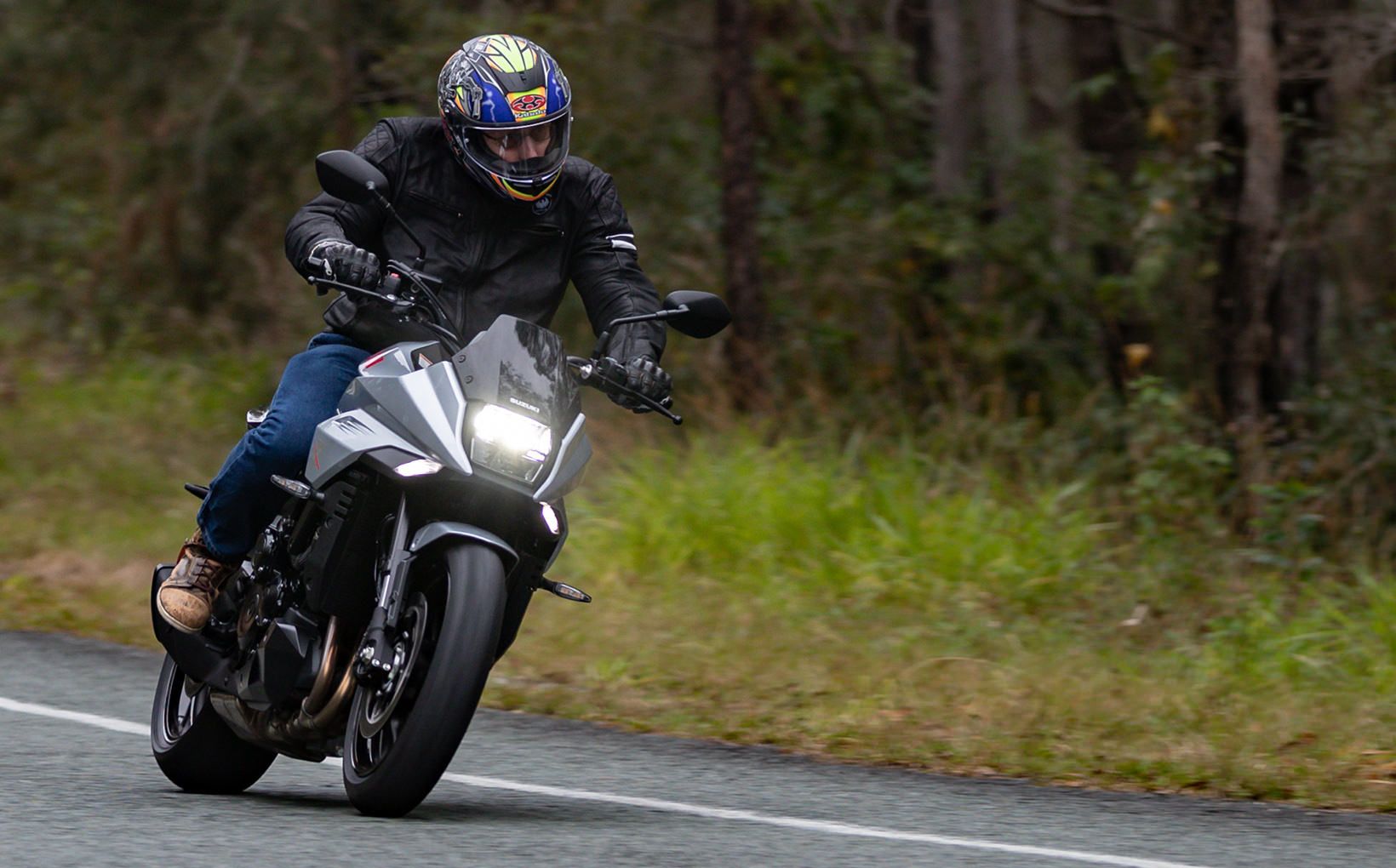 "...the Katana is deliberately out there, retro good look..."

When the first Katana models appeared in the 1980s they were radical departures from what we’d had prior. Styled from front guard to rear tailpiece, the Katanas weren’t actually anything super-special from an engineering point of view — all the early models were heavily based on other Suzukis — but they were very special to look at. Much the same can be said about the new machine which, despite launching in August 2019, is considered a 2020 model.

The angular look of the Katana appears to have slashes made by a swinging sword, with integration of the front fairing, tank, seat unit and now (for the first time on a Suzuki) a satellite rear fender mounted on the swingarm. This keeps the tailpiece looking very clean and sharp, although you could mount the number plate under the seat and ditch the satellite unit if you preferred.

Traditional touches carried over from the 1980s models include the Katana logo, two-tone seat, square headlight and detail designs in the bodywork.

The Katana is available in the traditional silver with red Suzuki sticker on the tank, or in black (which has been selling better in pre-orders and is also the one I preferred). 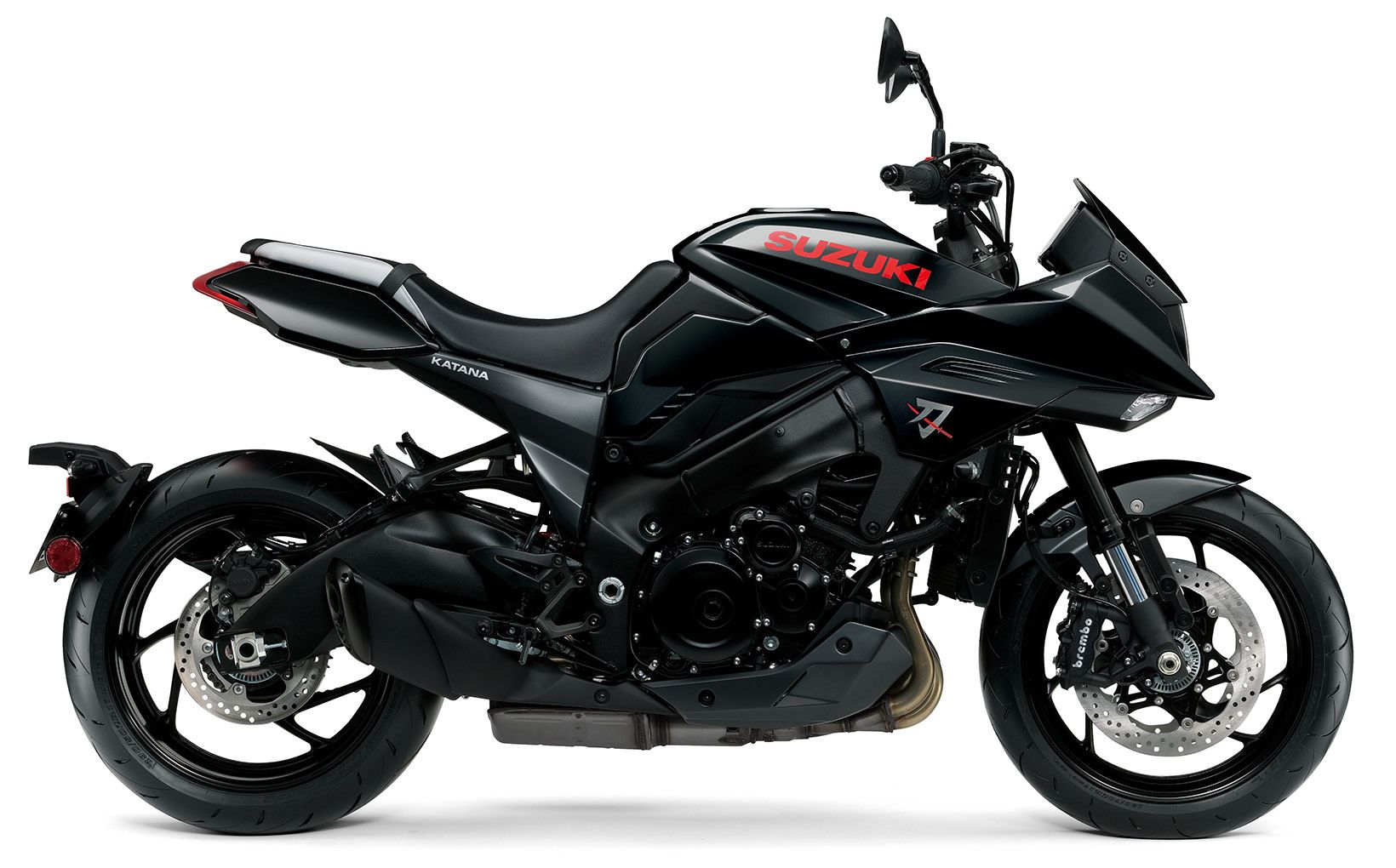 After Spanish bike mag Motociclismo talked famous bike designer Rodolfo Frascoli into designing a concept Katana for the EICMA show in 2017, Suzuki decided to run with the idea and build a new Katana.

A year or so later, Suzuki had one on display at the Australian MotoGP and the bike was released to the public in August 2019, as a 2020 model. That’s a fast development time, only possible because the Katana is so heavily based on the GSX-S1000.

The Katana is effectively a naked sports bike. Sure, it seems to have a half fairing, but it’s a styling exercise — there’s no effective weather protection and probably little aerodynamic difference between the Katana and a naked bike.

The chassis and swingarm are based on the GSX-R1000 sportsbike, an engine based on an even older GSX-R motor (although it shares few, if any, parts) and styling based on some European ideas on what a new Katana could look like.

In many ways what we’ve ended up with is a machine very similar, in practical terms, to the GSX-S1000. But where the GSX-S has quirky, modern styling, the Katana is deliberately out there, retro good looks around a modern chassis, engine, suspension and electronics. 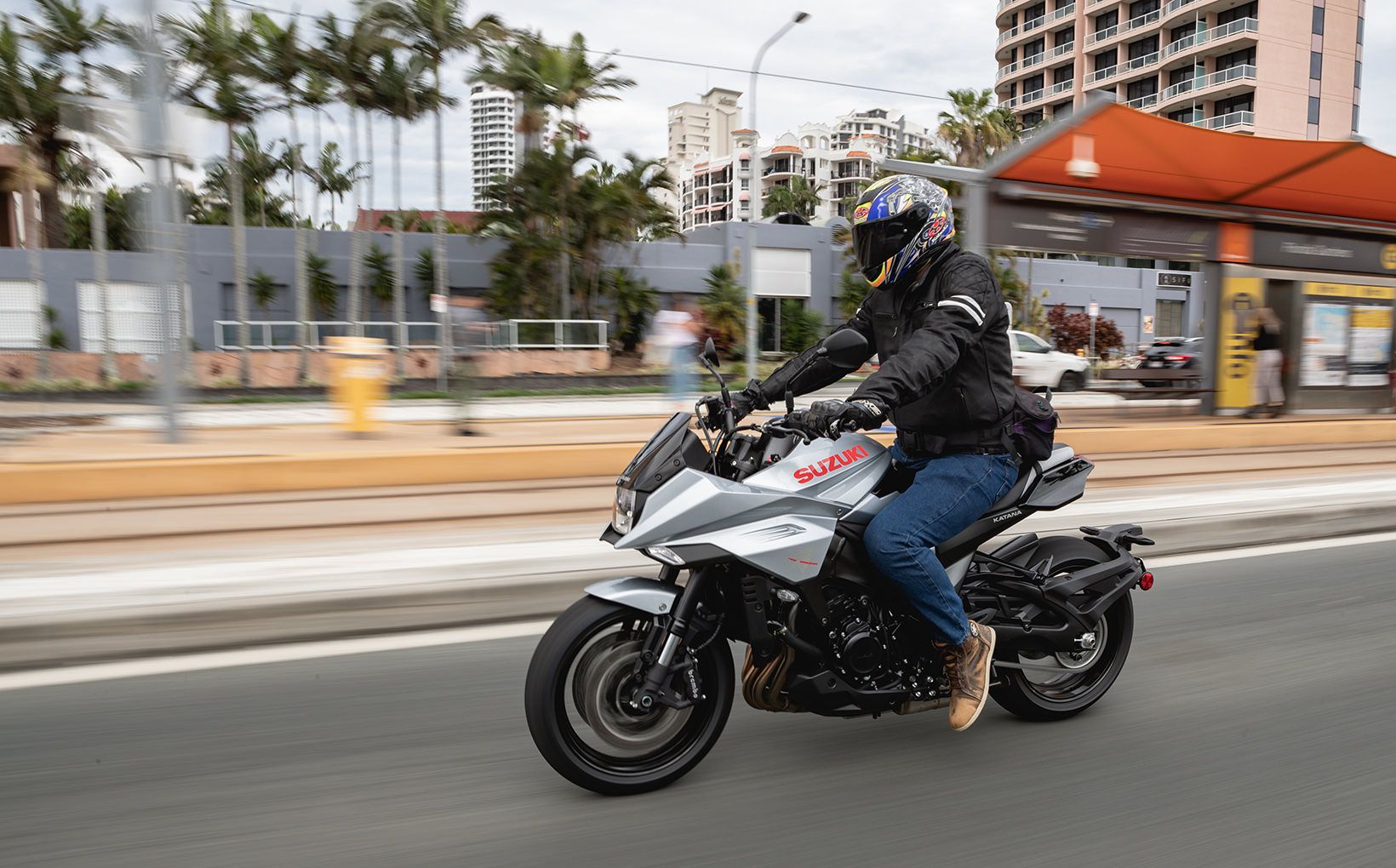 "...the Katana slices through traffic..."

Based on the “old” long-stroke GSX-R1000 motor, the powerplant driving the Katana is a gem, beautifully suited to the design brief of the machine. Suzuki pointed out that it’s not the old motor, but a thoroughly refreshed motor which is based on the old design.

There’s Suzuki’s dual-valve 44mm fuel injection and a standard 4-2-1 exhaust with Suzuki Exhaust Tuning valve to improve engine combustion at low RPM. The fuel injection features low rpm assist, which raises revs automatically to help prevent stalling, but I still managed to do so a couple of times because the take-up band on the clutch is quite narrow.

Updates include cam profiles designed for street and winding roads rather than the track, iridium spark plugs and new pistons and rings. 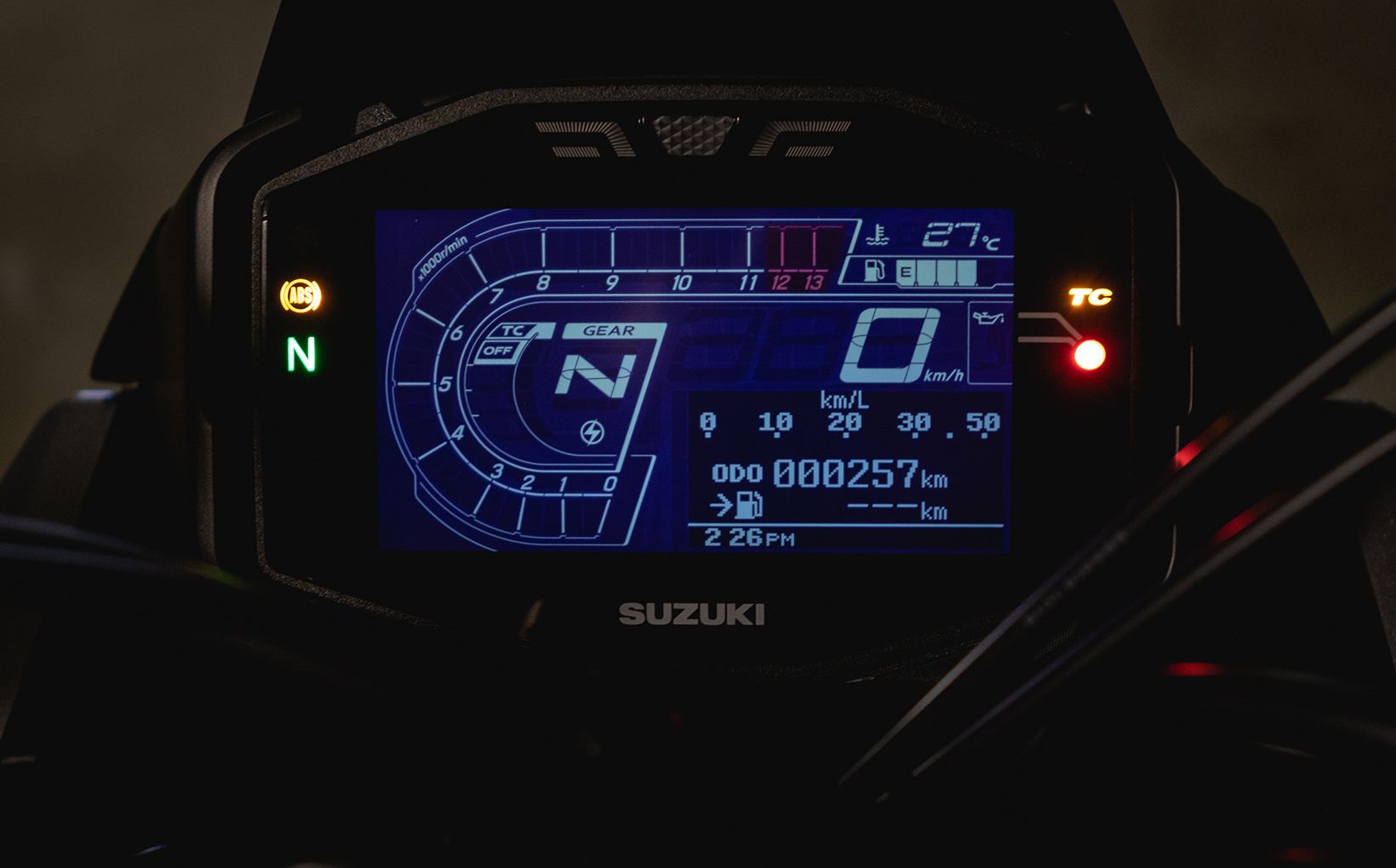 The Katana has switchable traction control (off, low, middle and high), which I reckon is what every roadbike needs. If you can’t switch it off, you can’t do a decent wheelie, and that sucks. Having low is great for sporty riding and track days, the middle is what you’d use most of the time, and high is great for wet or cold conditions.

Interestingly, the Katana doesn’t feature riding modes. You get full power all the time, and the power delivery is linear and easy to control.

The instruments are fully digital, with an LCD panel surrounded by warning lights. The LCD tacho sweeps from the bottom around a curve to across the top, with different-coloured warning lights coming on as revs rise. You can set the lights to come on to your preference.

The speedo is digital and is easy to read. Much of the other numbers — odometer, TCS position etc — are a bit small to read on the move.

There’s no cruise control, but there is an easy-start system, which will crank the engine until it starts; you don’t need to hold your finger on the button. 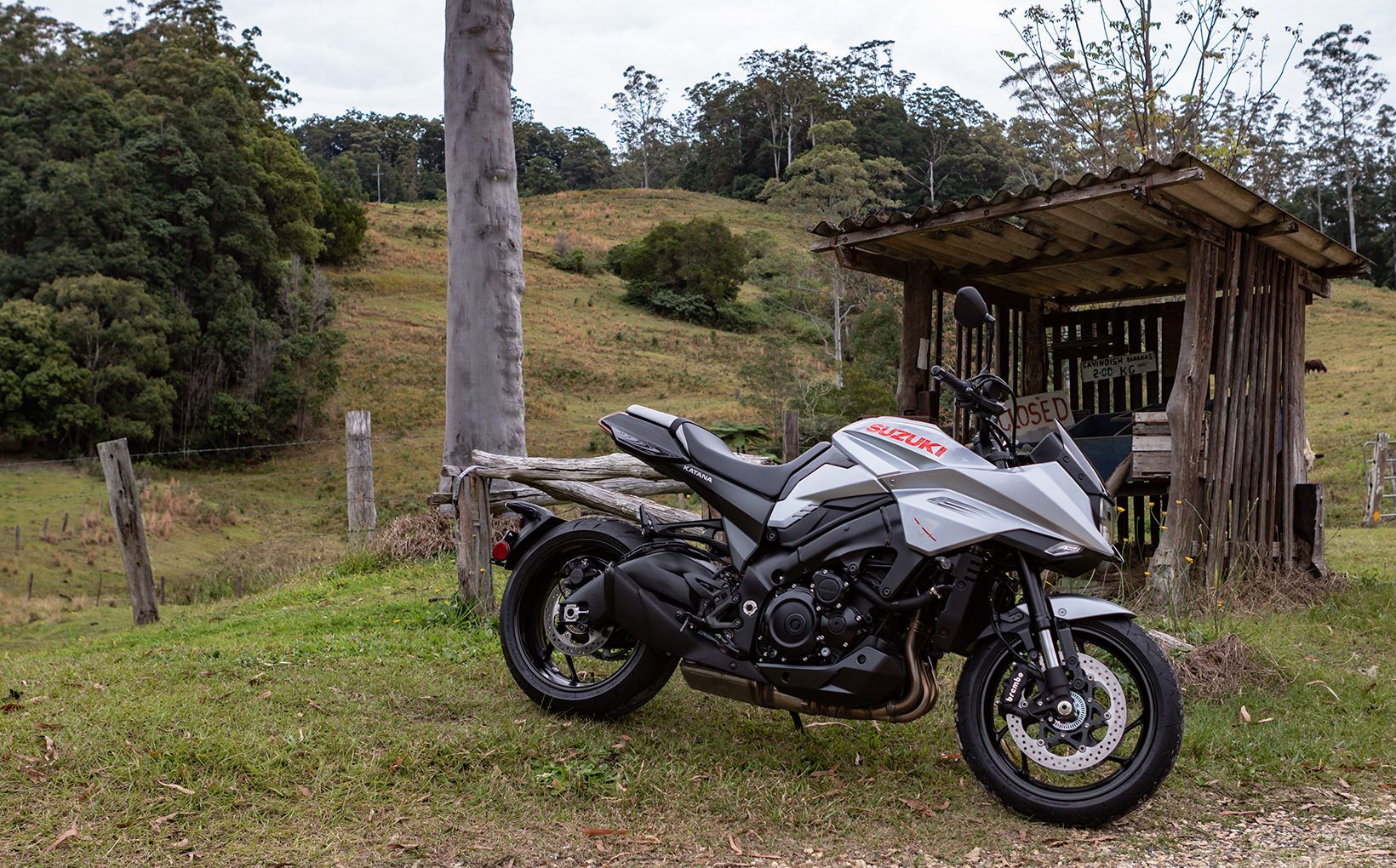 Suzuki has adapted the chassis and swingarm from other models to use in the Katana. The main chassis is an aluminium twinspar unit the engine hangs from and the swingarm is a giant box-section braced unit which wouldn’t look out of place on a Superbike.

The Katana features fully adjustable USD front forks and a single rear shock adjustable for preload and rebound damping. It’s reasonable kit: not top-shelf, but pretty good, and if you expect better on a bike costing less than 20 grand, you’re hard to please.

The launch was just a single day’s ride, and the roads we rode certainly worked the suspenders hard, but there was no time to adjust or tweak. Australian roads will test suspension to its limits, and good riders will find the limits of the suspension pretty quickly.

The riding position created by the design is really well suited to public roads. The seat height is a very reasonable 825mm and the unit is tapered at the front, enabling those with short legs to get their feet on the ground easier. 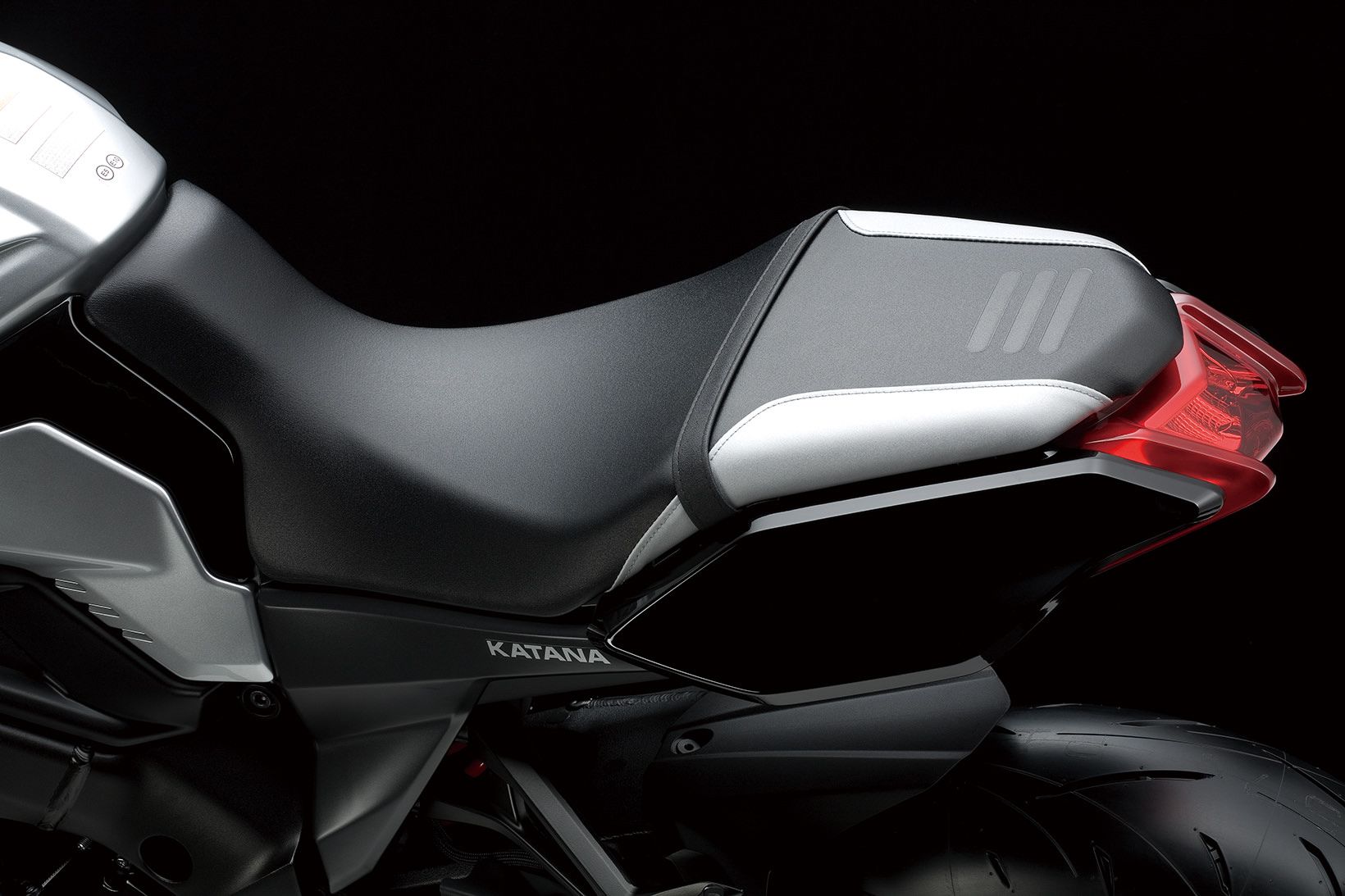 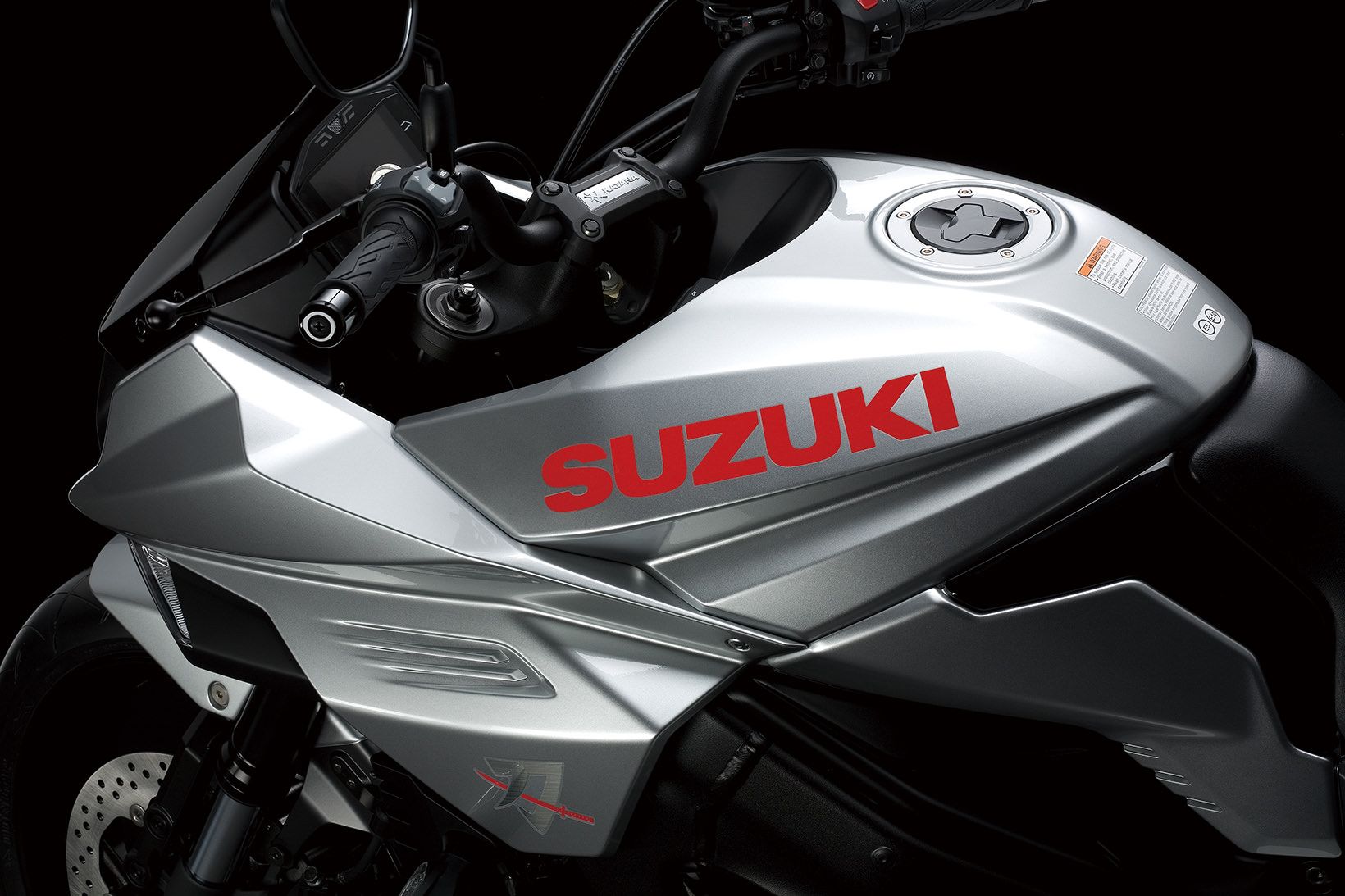 The one-piece handlebars provide a basically upright riding position — there’s a slight lean into the breeze, but that’s perfect for road speeds.

The footpegs are higher and more rearset than I expected, which is fun in the twisties but might feel cramped on a long ride.

Pillion accommodation is there for short rides only — there’s a traditional Katana-style pillion strap, high footpegs and a small seat. 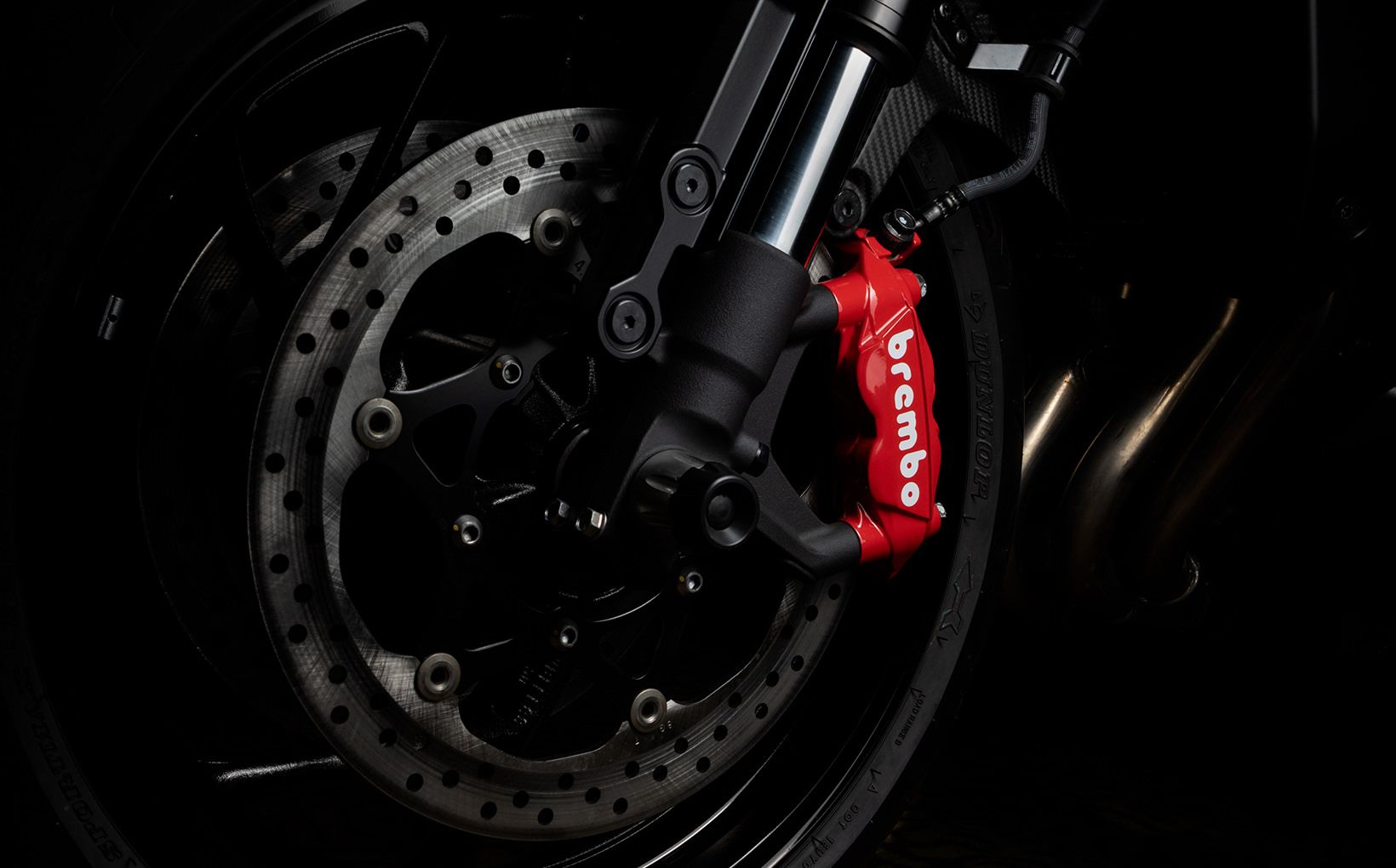 I found the brakes to be absolutely fine; they worked well but I wasn’t charging around a track and was never called upon to do an emergency stop. They simply worked, providing plenty of power without any grabiness or excessive front-end dive.

The Bosch ABS never intruded on my ride and you can’t switch it off. 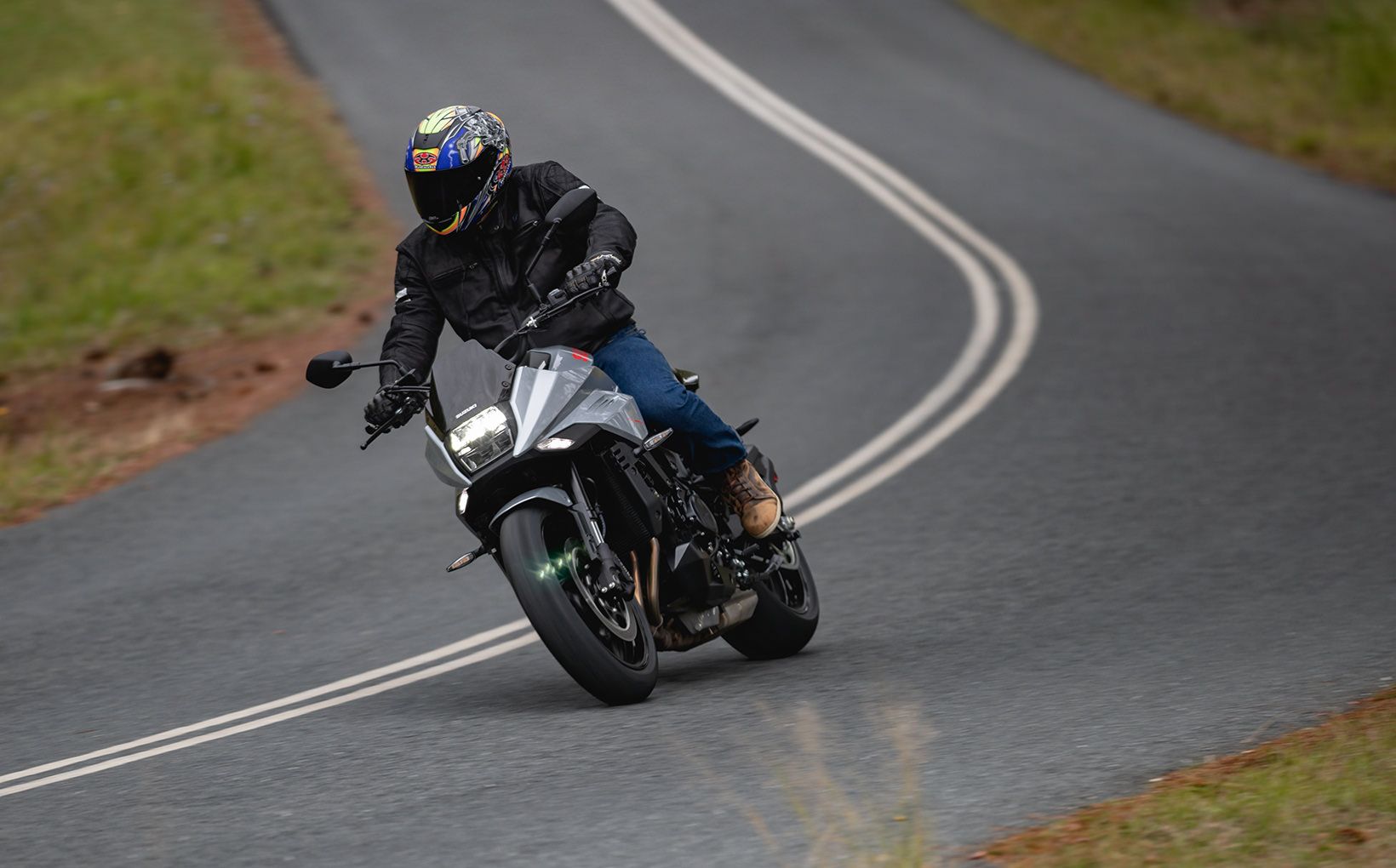 The Katana is a pretty compact 1000cc naked, but it’s not tiny. I was comfortable enough, although the footpegs are sportsbike-high and a little rearset.

The one-piece traditional handlebars are surprisingly conventional and practical, creating a sporty riding position that doesn’t put heaps of weight on your wrists (unlike many old Katanas). If you’re a city dweller, the Katana slices through traffic like a sword through butter. It’s narrow enough to filter easily, the wide ’bars make manoeuvring easy and the generous bottom-end torque makes getting off the line easy and quick.

Out in the countryside, the Katana handles well for a naked all-rounder and is reasonably comfortable doing so. A few 60-90-minute sessions across a day’s ride on the Katana is easy on the body and a fun way to spend a day. In fact, I reckon most people would be faster on most public roads on a Katana than they would be on a sportsbike like a GSX-R1000. The Katana’s spread of power, great torque, wide handlebars and stiff chassis work together to provide a confidence-inspiring ride that works over Australia’s bumpy, lumpy roads better than the stiff suspension you find on most sportsbikes.

Somewhere along the way you’ll need to refuel as a 12-litre tank won’t get you very far, despite the Katana’s frugal consumption. Design constraint got in the way of building a bigger tank, so 12 litres is what we’ve got; you might find yourself refuelling more than your mates.

Another traditional touch is pillion passenger straps… they are truly awful things but I can’t recommend the Katana to anyone who carries a passenger regularly anyway. Probably better back-seat accommodation than a GSX-R, but you’d have to be enthusiastic. 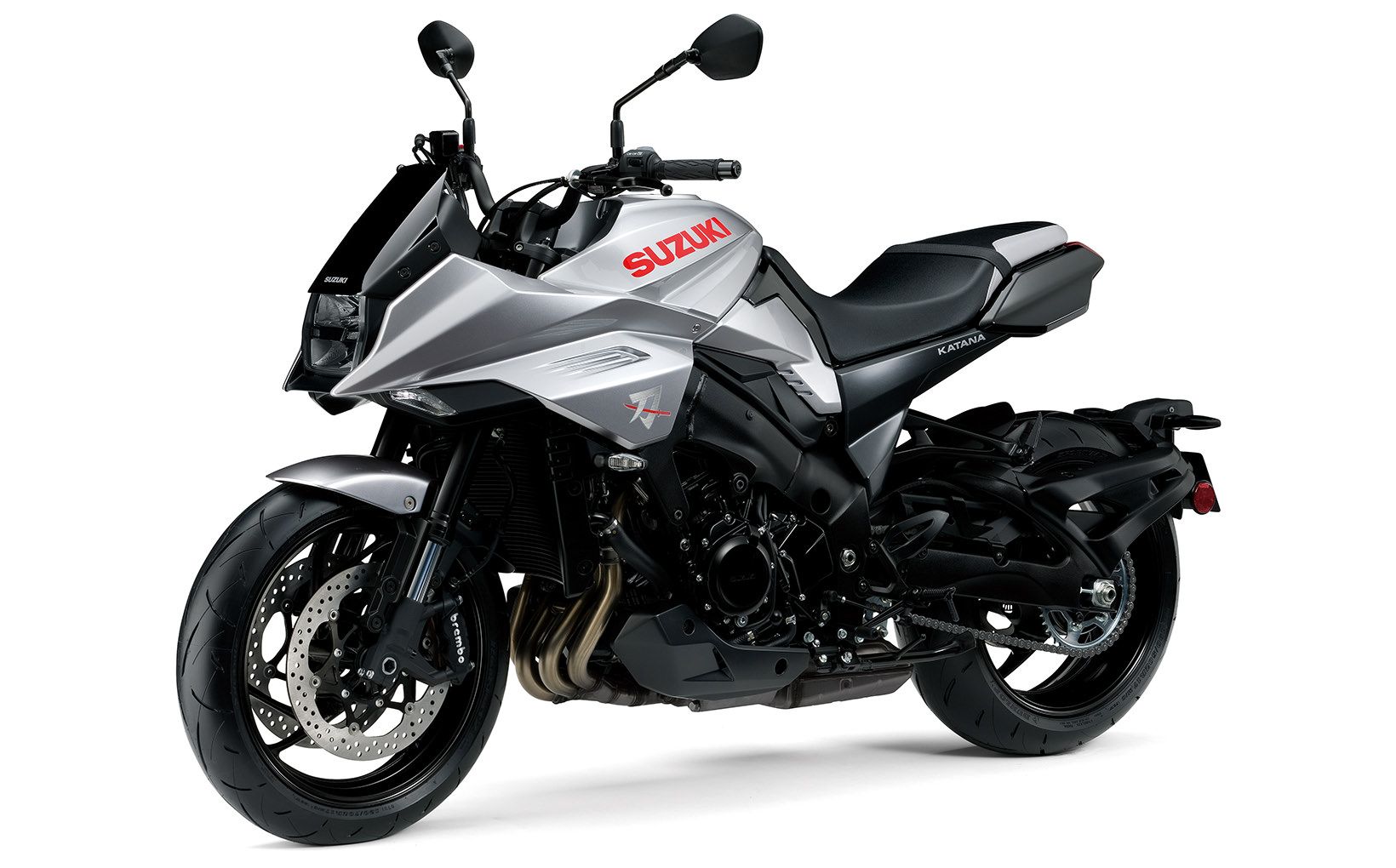 Suzuki has released a range of accessories for the Katana so you can tweak the style and function of your new bike. I particularly liked the red Brembo callipers and carbon covers, while I’m sure year-round riders will want the handgrip heaters.

Priced at $18,990 ride away, the new Katana is selling really well, with pre-sales prior to release high — the first shipment almost sold out. How much of that is history — people wanting something new with Katana style — or just demand for a machine that does what the Katana does with some style — remains to be seen.

I liked the Katana. It’s fun, reasonably priced, good looking and capable. It’ll do what’s in its design brief capably, but not so much outside that — touring and long distance rides will be inconvenient. aRr