Port Augusta to Alice Springs - Up The Guts 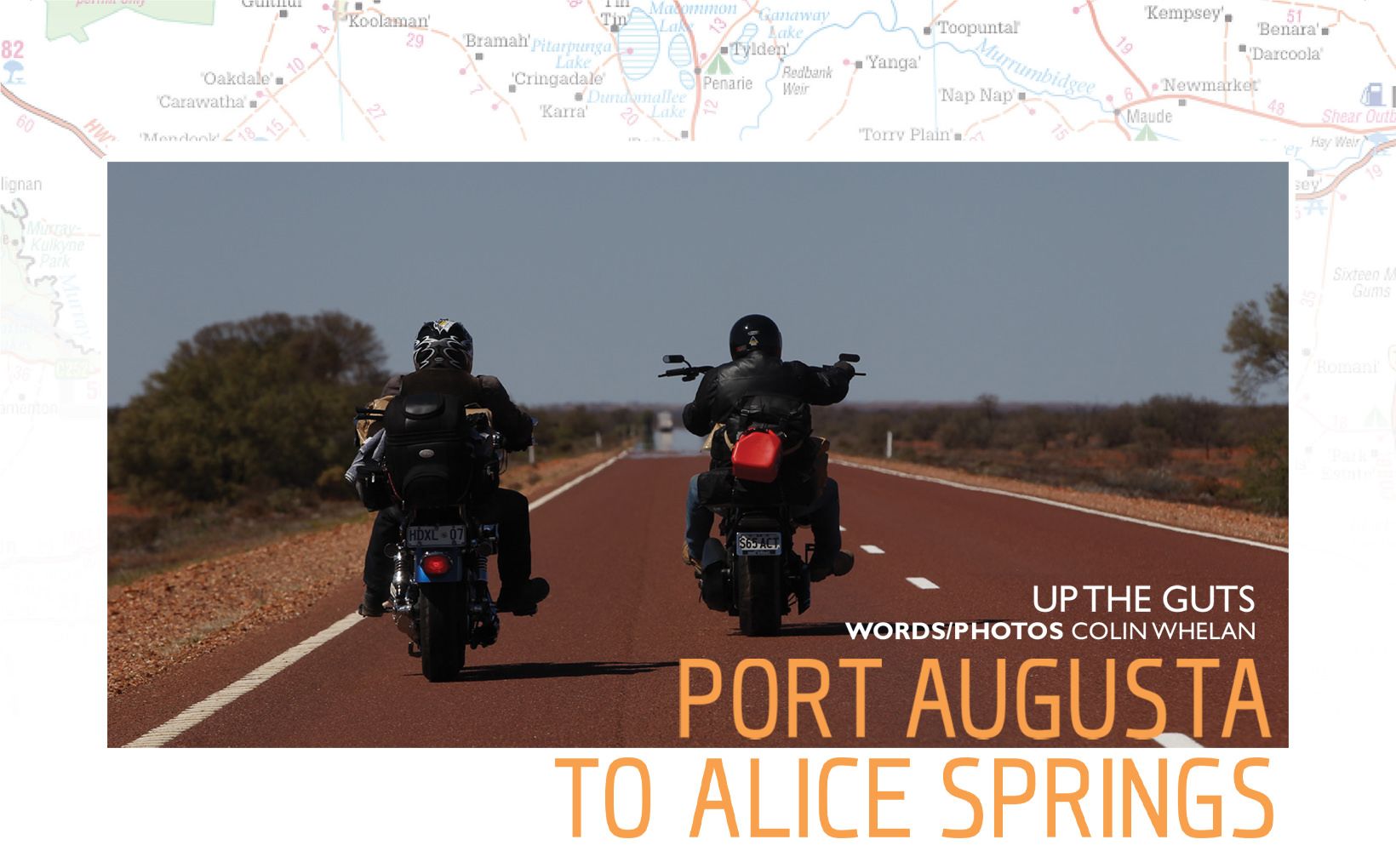 PART 1: RIDING FROM PORT AUGUSTA TO DARWIN ON THE STUART HWY

It’s one of the must-do rides for any serious motorcycle tourer: right up the guts, from Port Augusta to Darwin, bisecting this country into east and west. I don’t reckon too many riders actually start from Port Augusta which, let’s face it, is a pretty ordinary place. But no matter if you’ve come across from the east via Broken Hill, up from Adelaide or across from Perth the best place to spend the night before heading up the centre is Wilmington so that’s where we’ll start.

One of the friendliest towns with the friendliest locals and a great place to gather yourself before your ride north, or to recover after a ride south from the top end. Every time I’ve been there I’ve ended up somewhere like a shearing shed going at top gallop, or out with sheep dogs working a fl ock. Don’t waste your time not talking with the locals! The Caltex only sells 91. If you have time and feel like some twisties head south and take the sign for Alligator Gorge which is 12kms down the track. Good ride but some speed bumps! Wilmington Hotel; 08 8667 5154.

Got everything you need except a personality! The best fuel is to the south of the town and the best food and drink pub for mine is the Hannahville at 30 Gibson St which serves very good tucker and wines with a smile! The IGA is to your west just north of the bridge over Spencer Gulf. If your bike is needing anything, Northern Motorcycles are at 72 Stirling; 08 8642 5551.

Looking for friendly professional service? Don’t stop at Spud’s at Pimba! Keep heading north unless you absolutely need fuel. Have yet to be there and not be made to feel like I’m interrupting their day.

The welcoming sign back at Pimba (hopefully you missed it) reads, “Strictly no parking bikes on verandah”. The sign here reads: “Population 30, Sheep 22,500, Flies 2,000,000 (approx.)” and those two signs capture the difference in attitude between the two places. You’ll get a good feed here and uniquely along the Stuart, they sell 91, 95 and 98 grades of fuel.

One of my all-time favourite outback towns. The most extraordinary accommodation is at Riba’s Underground Camping, 5km south of the town on William Creek Rd. You’re not going to throw your tent or swag elsewhere in anywhere like this! The Shell servo on the left on the way into town has a great restaurant but for fuel you’re better off going to the much friendlier BP in the town centre. They sell 91 and 95.

Marla is where the Oodnadatta Track comes out and if you have the time, hang out and some hard core adventurers will be sure to come by. Like all servos here, the restaurant is licensed and the servo has 91 and 98.

Best roadside bar on the ride for mine. Great host and staff and real cold drinks. Servo sells 91 and 95.

If you don’t want to stay right in Alice, this is a great option. Good clean, owner-run and friendly. You can throw a swag out back for nix but for just ten bucks you can camp or swag on the grass with showers thrown in. Budget rooms are just 40 bucks a head and the restaurant is open for all lunches and dinners. Oh and there’s a pool and the servo has 91 and 95; 08 8956 080.

If you absolutely need to stay in town, the Aurora Hotel on Leichhardt offers secure lockup parking (which you want here). Desert Edge Motorcycles at 23 George Cres; 08 8953 7711 will be able to fi x any problems you might have with your bike. I never visit the Alice without heading west through some amazing country to Ellery Big Hole for a swim. At the north end of town turn west off the Stuart onto Larapinta Drive, signposted Hermannsburg and Glen Helen, and follow this for 46km then take the right for Glen Helen and keep going for 40km until you see the brown sign pointing right for Ellery Big Hole. One km down here and you’ll be at one of the best swimming holes in the outback. 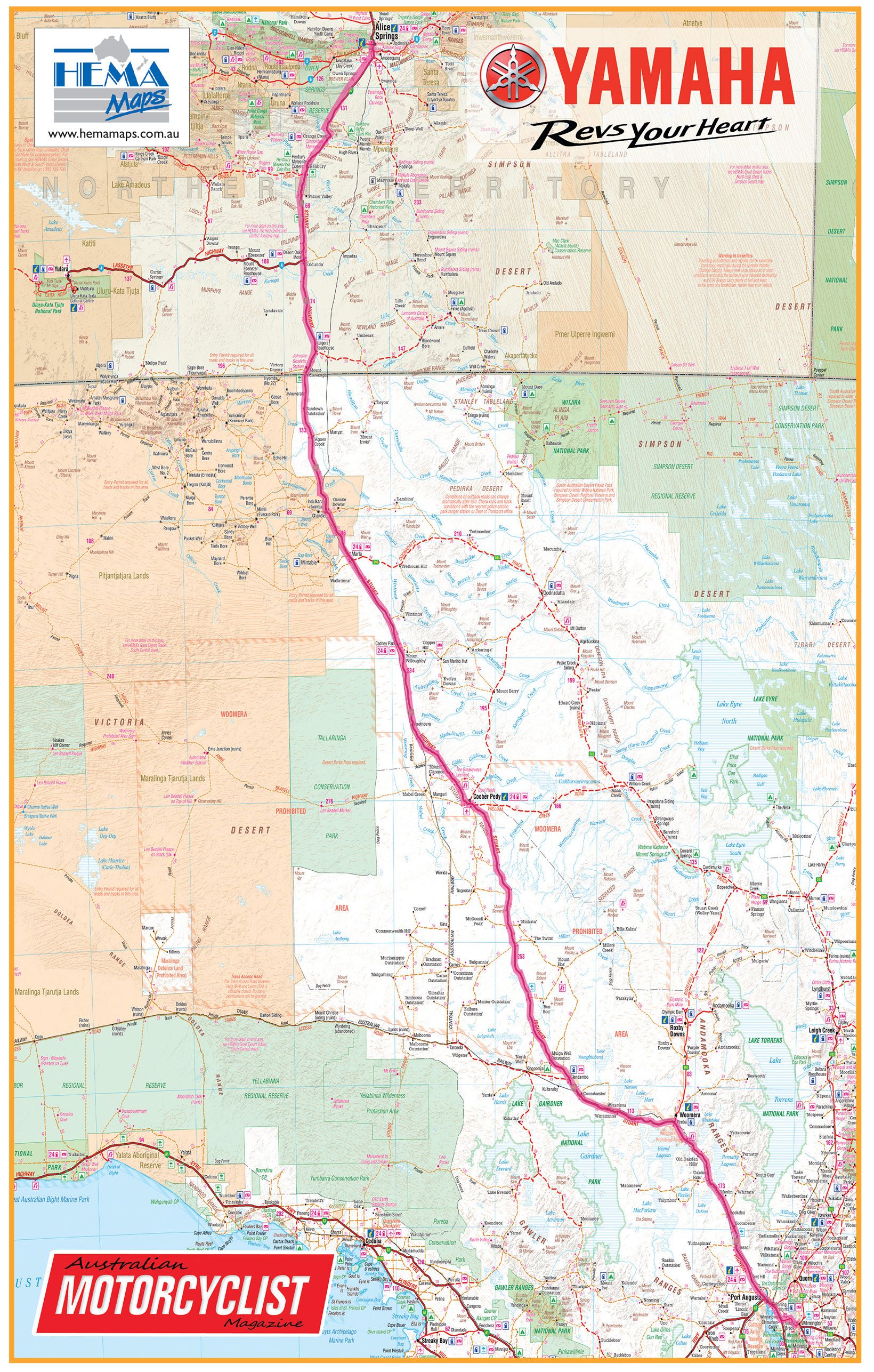 Head north from the Wilmington Pub and take the well signposted left for Port Augusta. Enjoy the hills, the bends and the curves through Horrocks Pass coz you won’t be bending it over like this again for a while!

Once you’ve cleared the last of the Adelaide Hills and see Spencer Gulf in front of you, roll down the slope, cross the railway line and take the right at the T onto the A1 and the 20km ride into Port. Best to fi ll up at the servos and truck stops on the south end of Port Augusta and then continue straight as the A1 morphs into the A87 which is the Stuart Hwy.

If you’re using a Garmin and have set Alice Springs in as your destination, your front page will be telling you to turn in 999km because there’s only three digits available. Obviously these things aren’t designed in/for Aussie! But if you want to get a real idea of how far you have to go before turning, fl ick to the second screen which for some reason has four digits. It should show a tick over 1200km!

About 65km out of Port you’ll come to the Ranges View Rest and Free Camping area which is a decent place to camp but a bit close to the road for my liking. Then 110km further north you get to Pimba, the turnoff for Woomera and Roxby Downs and you’ll fi nd Spud’s Roadhouse on the corner. If you’ve still got 115km in the tank, and prefer friendly service, it’s an idea to keep heading up to Glendambo.

You’re now in amongst some of the great salt lakes of South Australia and depending on their levels, you’ll get some wonderful photos as the land turns harsher. Seventy kilometres shy of Glendambo is the Lake Hart Free Camping area on the northern side of the road. This is huge and you can get right away from the highway and throw down your tent or swag with what can seem like ocean views. A top spot for a break even if you’re not overnighting before you get to Glendambo.

Doesn’t really matter if you fi lled at Pimba because with Coober Pedy, the next place north of here, being over 250km away, both your bike and you are going to need to top up your fluids.

From Glendambo the Stuart swings from its westerly path back northward for the two hour ride into Coober Pedy. Eighty five kilometres north from Glen you’ll find the Bon Bon Rest and Free Camping area on the eastern side of the road and then it’s another 170km into Coober Pedy. You’ll be welcomed into Coober by the old truck mounted mining rig on your left and then a few hundred metres later take the well signposted right onto Hutchinson St and into the town of Coober Pedy. You’ll find the Shell Servo on your left.

To restart your trip north just retrace your route back on Hutchinson and turn right back onto the Stuart. Again, make sure all your fluids are full! You’ve now got 235km to Marla, your last town in South Australia before crossing into NT 159km to the north. (The crossing monument is to your west.)

Kulgera, some 55km north is your fi rst town in the Territory and it’s well signposted to your east.

Erldunda Roadhouse is now just 116km north and 30 odd kilometres further you’ll fi nd the Desert Oaks Free Camp on the western side of the road and then another 80km (after you pass the Finke Free Camp) to Stuart’s Well Servo and Hotel. From here it’s an easy 90km to where the lonely old Drive-In and the wonderful cutting welcome you into Alice.