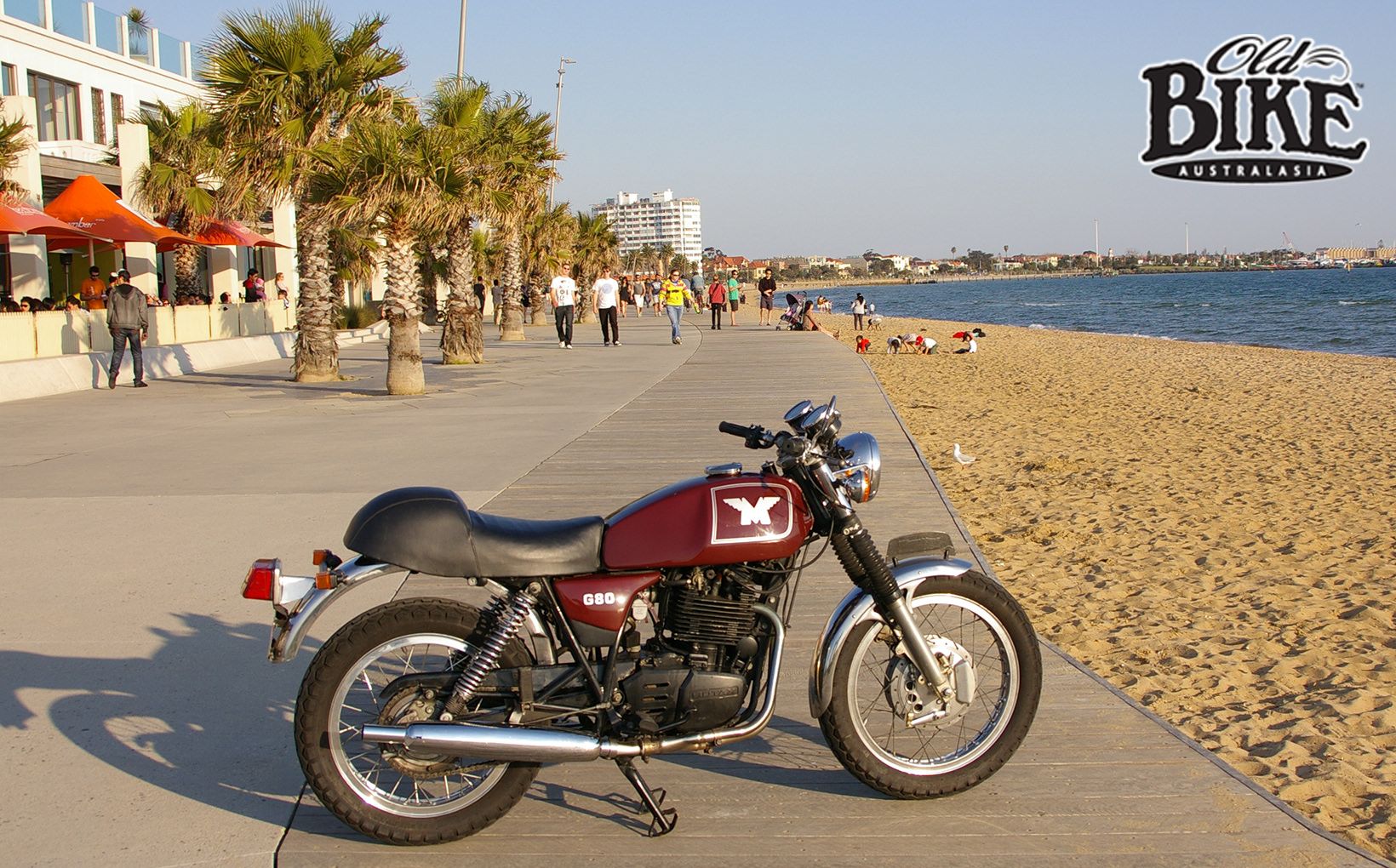 There was a time when British 500 singles dominated nearly everything in motorcycling - from commuting to sport to racing. And when the last of the classic British industry ran down in the 1970s, many enthusiasts claimed the time was right for a modern 500 to emerge. Inevitably, the following decade did see such a machine did appear. It became one of the most unusual episodes in British bike history. This was the short-lived Matchless G80 Rotax 500. Traditional push-rod Triumph 750 Bonneville builder Les Harris had the facilities in deep Devon to make it all happen and he had done his shopping around Europe to ensure the long list of vital parts could all be supplied.

The plan was simple: make a traditional 500 single by building a good British frame to house the top-rated Rotax engine, use Bonneville parts where possible and have the many Italian factories supply everything else. The whole plot was to be assembled in the Harris factory in Newton Abbott. On paper everything was top notch. The frame was right, Rotax engines had a great reputation, Italian suspension and brakes were very good and the bike looked the part.

But low volume vehicle production is never easy. As nearly every such producer for the past 100 years has learnt, costs always rocket and it only takes a couple of short supply orders to delay too many motorcycles that tie-up too much money. As Les Harris battled to keep his bikes rolling out of the Devon doors, the motorcycle media did what it’s best at in finding faults, usually small faults which were trumpeted as major failures. At the price being asked, such faults – although detail - were unacceptable.

To add balance to comment on Harris’ designs, the frame is very good. From the most suitable design numbers to the neat way of including the oil in the top and front tubes to the drop-away bottom cradle which allows the engine to be easily removed, this frame gets top marks.  Fortunately, the born-again Matchless did win buyers. They liked the simplicity in an age when Japan seemed to be making everything so unnecessarily complex. G80 riders boasted of the sweet 500 single which with its gear-driven counter-rotating balance shaft was as smooth as it was flexible. 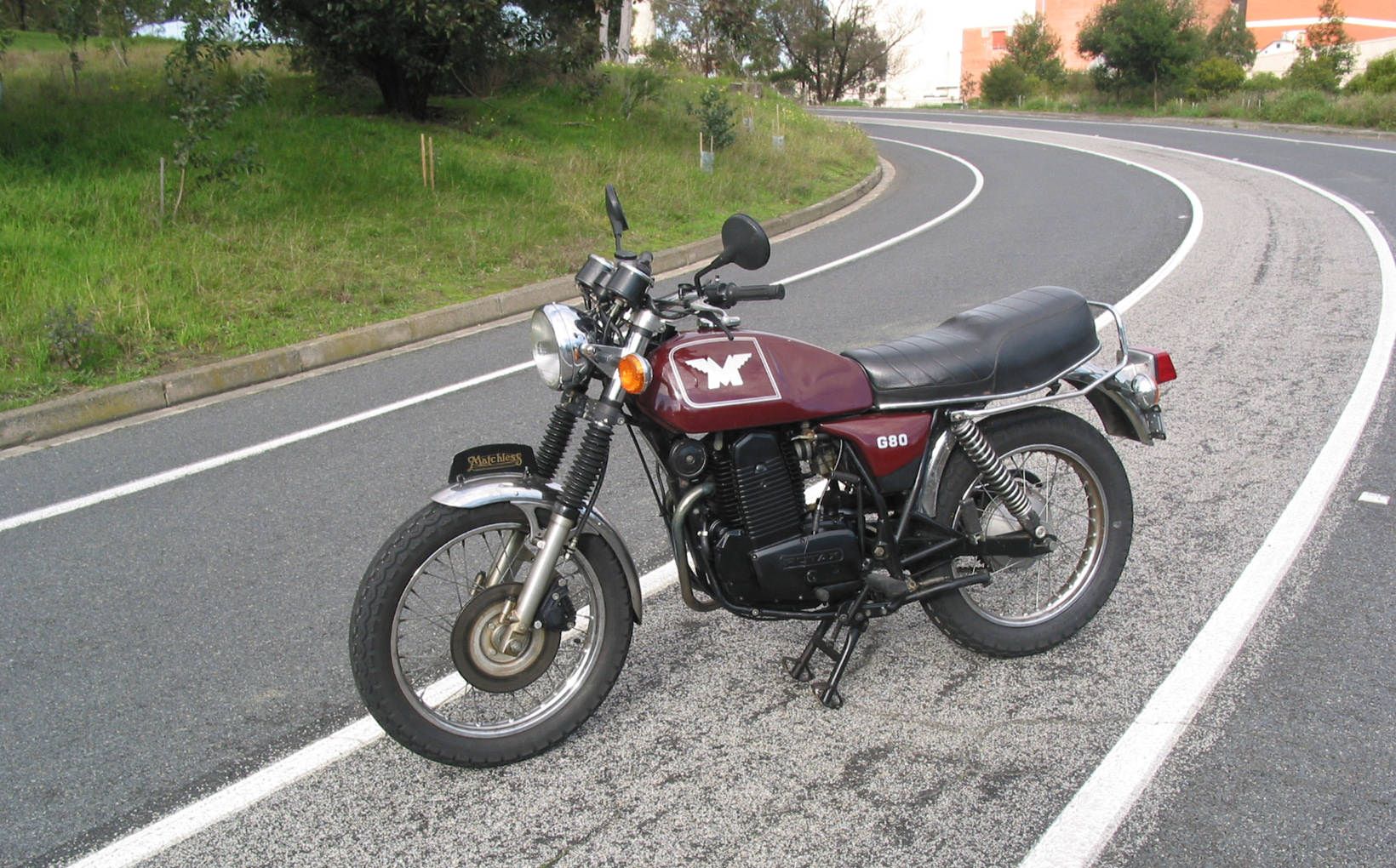 Matchless G80 Rotax 500. Most were black, some were silver, very few were dark red. All engines were satin black.

Although it was promoted as a British bike, the G80 boasted the pick of Europe for most of the parts. The Rotax engine was a great asset. This was the single cylinder, four stroke engine maker of choice for no less than KTM and BMW. A change to a bigger carb, wilder cam and sportier muffler quickly boosted the output to 42bhp with the engine proving strong for 7500rpm. A gear-driven counter-rotating balance shaft kept vibes to a minimum. The Rotax dry sump needed an external oil tank which meant the bike makers had to build a frame that housed the oil. The compact overall construction included gear drive to a wet clutch and five speed gearbox which all shared the engine lubricant with a replaceable filter being located above the gearbox sprocket. In operation, these were tough motors that needed minimal maintenance.

Essentially, this was a British 500 single in the finest tradition with all the really important judgement points being marked with a tick. The Rotax powered Matchless was a great combination of form and function, it didn’t suffer excess weight or wheelbase, had a low centre of gravity, good brakes and suspension, and above all was simple in the most purposeful way. But opinions and preferences aside, the problems of running a viable business from motorcycles assembled out of bought-in parts was too hard. After less than 900 machines had been completed, production ended in the late 1980s. Matchless died again. Why?

The price was unavoidably high yet the level of gadgetry sophistication was low in an age when other bikes had lots. This was essentially a 1970s style bike in the 1980s with 1990s pricing, so the value was bad. Most owners disliked the left foot kickstarter lever and too few bikes were fitted with the electric start option. Many broke spokes where they exit the rear hub flange and only replacing with better quality or thicker spokes was a cure. Italian chrome proved to be Italian chrome with Lafranconi exhausts and Radelli rims producing rust too soon. Although the stock muffler was quiet, it made the bike sound like a stifled scooter not a classic 500 Brit single. Many mufflers were replaced as soon as rust appeared, or sooner. The influential negative rumour mill made much of the belt-driven camshaft but given the right servicing the arrangement was trouble-free over very long distances. 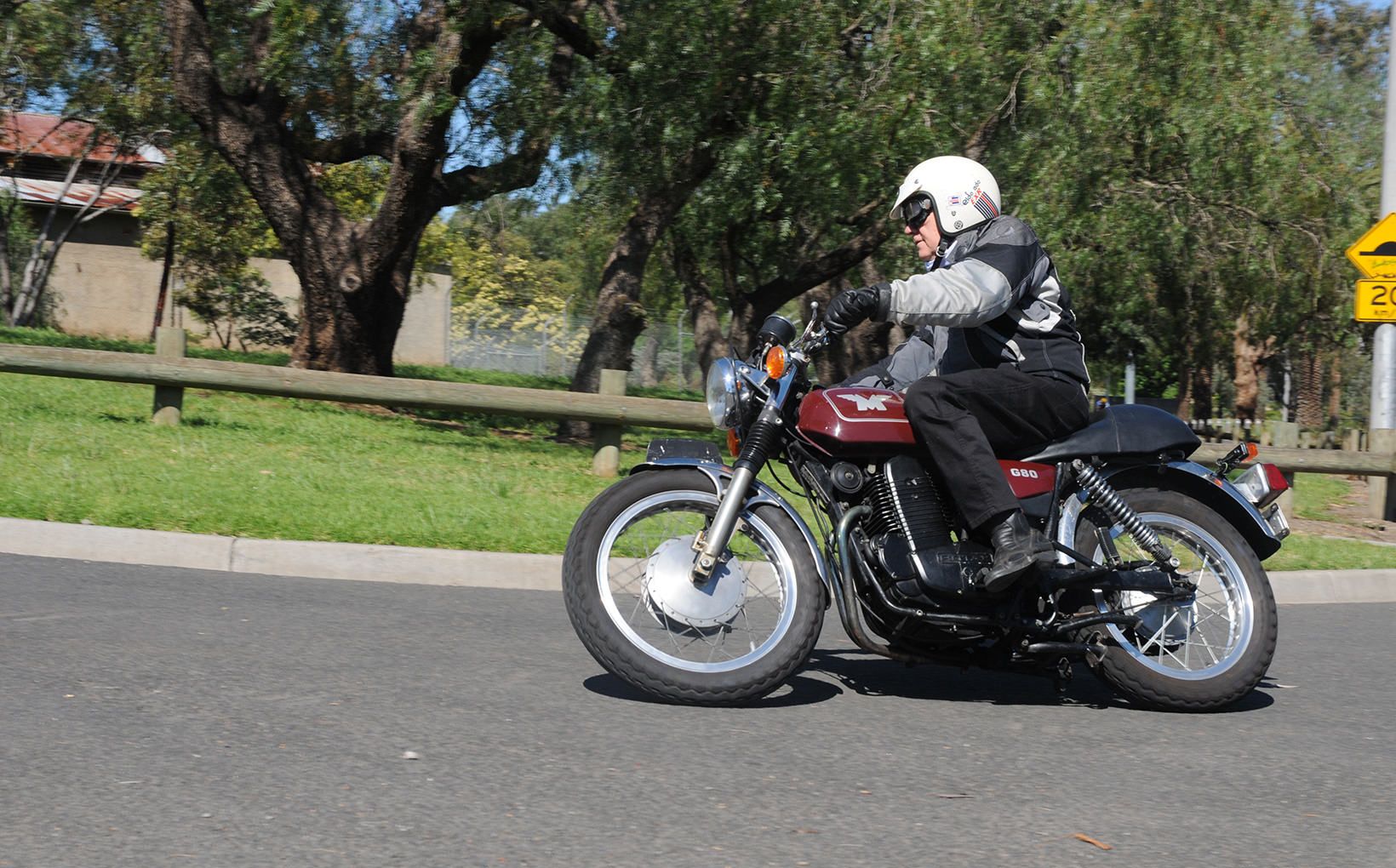 Classic buyers looking for a Harris Matchless will come across two types of machines. The first will be those owned by enthusiasts who keep their bikes in garages and clock few miles in between careful maintenance. Such bikes are still available as this G80 is a fairly late classic, but the price will be high. However for those machines used regularly, the one factor which will have made a noticeable mark is corrosion. The original exhaust and wheel rims will have been attacked by rust, some electrics replaced and possibly the frame and fittings should have been repainted. Even petrol tanks were inadequately protected and can rust quickly

Mechanical durability is not a problem as these are tough bikes capable of large distances if maintained. Shorter buyers should be sure they are capable of mastering the starting technique as this left kicker can be a love hate relationship. Always be prepared to pay more for an electric start version as the cost of converting a non-electric starter is insanely high due to the fact the mountain of parts needed to fit a starter motor and its drive train includes a new set of crankcases. 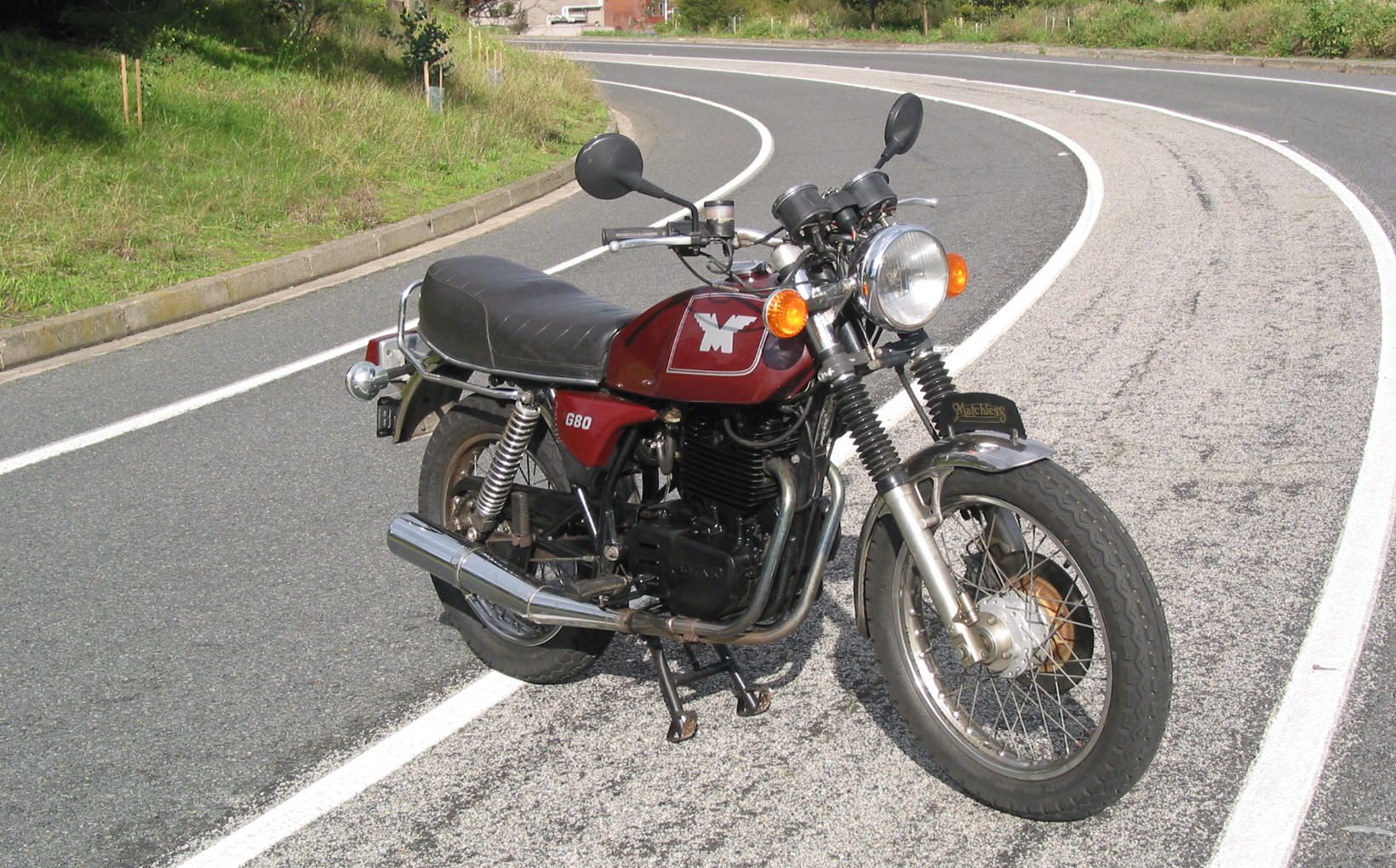 To accurately define what this G80 came up against, the 1980s saw two very impressive big single cafe racers come onto the market: Yamaha SRX600 and the Honda GB500TT. These had the massive advantage of being second-generation and highly refined Japanese big singles, both had a fortune spent their development and both could outperform the G80 in the normal criteria of user-friendliness as well as go, stop and turn. And unfortunately for the Harris business, both those Japanese bikes were a lot cheaper, won bigger magazine reviews and sold through a huge dealer network.

Physically this is a compact 500. Not a scaled down big bike nor an enlarged small machine but a true 500. The claimed numbers of 35 bhp for 330 pounds dry weight give good power to weight ratio as do the feel of 54 inches wheelbase with 27 degrees fork angle. Size-wise, the G80 figures add up just right. But getting onto the road means first of all learning to start the thing; for most the left kicker can be a nuisance. Many riders say the trick is to leave the bike on the centre stand and for the rider to be positioned on the left using the right leg for a vertical down kick. Applying normal valve lifter methods and given a bit of practice, the Austrian motor rumbles into life. On the subject of the kickstarting problems, Because of the accelerator pump, if the throttle was blipped too much during hot starting the engine can flood.

After a push off the centre stand with the motor running, everything is ready for the off until the rider realises the Italian Megura clutch lever is too short, so demanding firm clutch pull from the unnecessarily heavy action. Selecting gears would be easier if the clutch lever geometry was arranged to work with the clutch mechanism. Another mis-match is the wrong twistgrip because it has a small diameter barrel for the 36mm carb which means the slow-acting device needs far too much angular movement to quickly open the Dell Orto for fast response acceleration. But the output of the 500 is good with decent power coming in at just 2,500 rpm and staying all the way to the red line of 7,000. The motor is not just a smoothie with good grunt but it also runs mechanically quiet. Like nearly all modern big singles, flywheel weight and the resultant flywheel effect is minimal. This means being sure to open the throttle to avoid stalling on take-off, enjoying quick pick-up, noticeable engine braking and a bit of torque impulse vibration under hard acceleration. 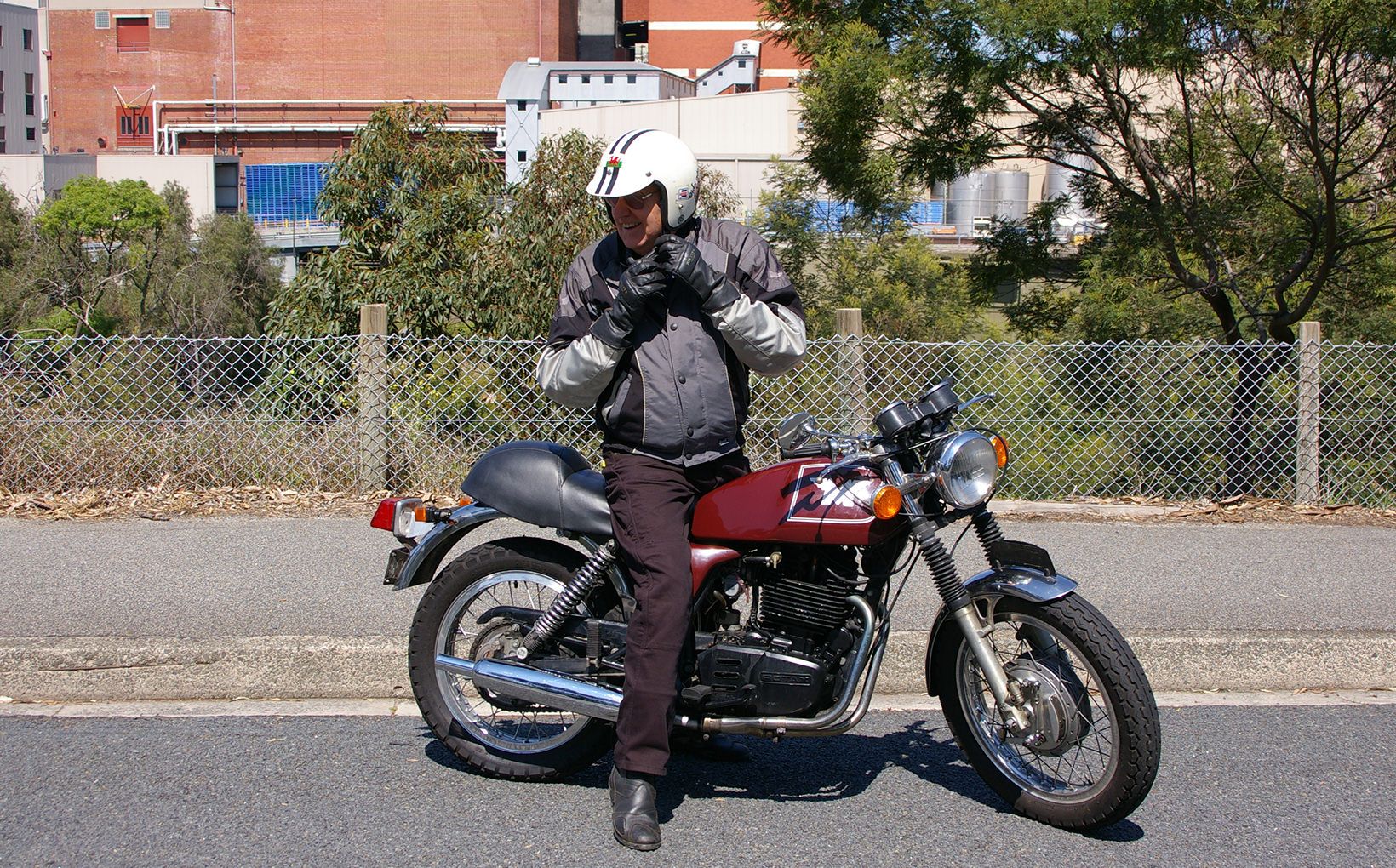 Ready for some fun!

On the other side of the performance scale - braking - the Matchless is good. Although the British front disc is relatively small at just 260 mm, it is cast iron which has greater bite than stainless so the stopping power is as good as say a 300 mm stainless disc. Also, the Italian Brembo hydraulics and the Italian Grimeca rear drum work well giving as much feel as power. Apart from a couple of Ducati models, few bikes have been fitted with this type of Italian Paoli suspension. Both the forks and rear units have a very good action and the right spring rates to suit the weight of the bike with just the rider aboard and well matched damping. Although various adjustments are provided - including the rate of braking dive on the forks - all can be left alone as the stock settings work okay. The Paolis combine with the low weight and good frame dimensions to give excellent classic style 500 handling. Right up to the maximum speed of around 100 mph, the G80 always steers and stops great.

For the touring rider, this Matchless is good. At 70mph the engine is spinning at little more than 4500rpm at which revs there is next to no vibes. Fuel economy ranges from 50 to 70mpg depending on how much of that slow action twistgrip is used. And on long trips, the British Bonneville seat proves reasonably comfortable. Features like a lockable tilting seat for the toolkit, O.E. British tyres, a reasonable petrol capacity and undeniably good traditional looks are all part of the package which makes this G80 a respectable all-round machine. This G80 really is in the finest tradition of good 500 single.