Stevens. The before and after of A.J.S. 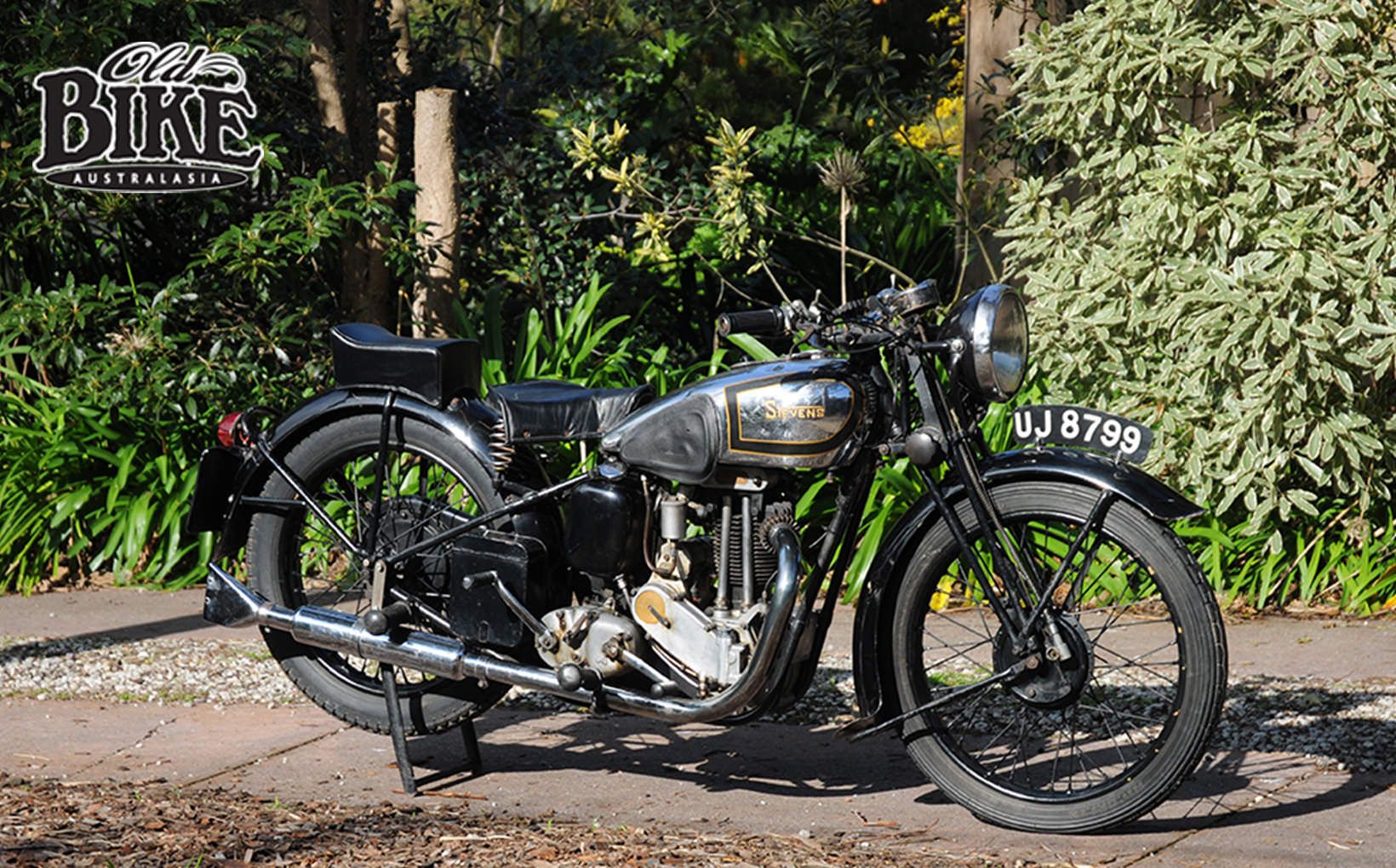 “This engine is rubbish. I could make a better one myself”. Words to this effect could well have been uttered by Harry Stevens as he pondered the shortcomings of the US-made Mitchell 4-stroke petrol engine that his father Joseph had purchased for use in the family engineering business. Harry, and his brother Joe junior, had joined the family business during its transition from basic blacksmithing to more skilled engineering, trading as the Stevens Screw Company, and Harry set about designing his own engine. After obtaining rough castings from a company at Derby, the two brothers undertook the machining and built up the first engine in their spare time. Delivering 1.75 hp, the new engine was everything the Mitchell wasn’t – efficient and reliable. This was in 1897, and soon, Harry and Joe were joined by two other brothers (there were nine children in the family of Joseph and Sarah Ann Stevens), George and Albert John (Jack). The new Stevens engine had automatic valves, trembler coil ignition and a surface carburettor, and fitted to the bicycle in place of the Mitchell, was noticed by the people from bicycle builders Wearwell, whose factory was just up the road from Stevens. Wearwell commissioned the Stevens brothers to produce an improved version of their engine, developing 2.5 hp. In 1903 Wearwell marketed a new machine as the Wolf, powered by a vertical twin Stevens engine, and a wide-angle V-twin Stevens motor was also developed for Clyno.

Jack was particularly keen on motorcycle sport as a means of promoting the business, and had competed in trials and other events on a Wolf prior to 1910. When the Auto Cycle Union decided to create separate races for Junior (up to 350 cc) and Senior (Unlimited) machines for the 1911 Isle of Man TT races, Jack entered the Junior, creating a 350 cc class machine especially for the purpose, which was named A.J.S. The reason for this was that of all the brothers, only Albert John had a middle initial. For the TT, he rode a 298 cc side-valve machine with a slightly modified Stevens engine with a two-speed countershaft gearbox and belt final drive. A second machine was prepared for a private owner, J.D. Corke. Both AJSs finished the gruelling event, and the new marque went from strength to strength, particularly after the 1914 meeting, when AJS took the first four places in the Junior TT. 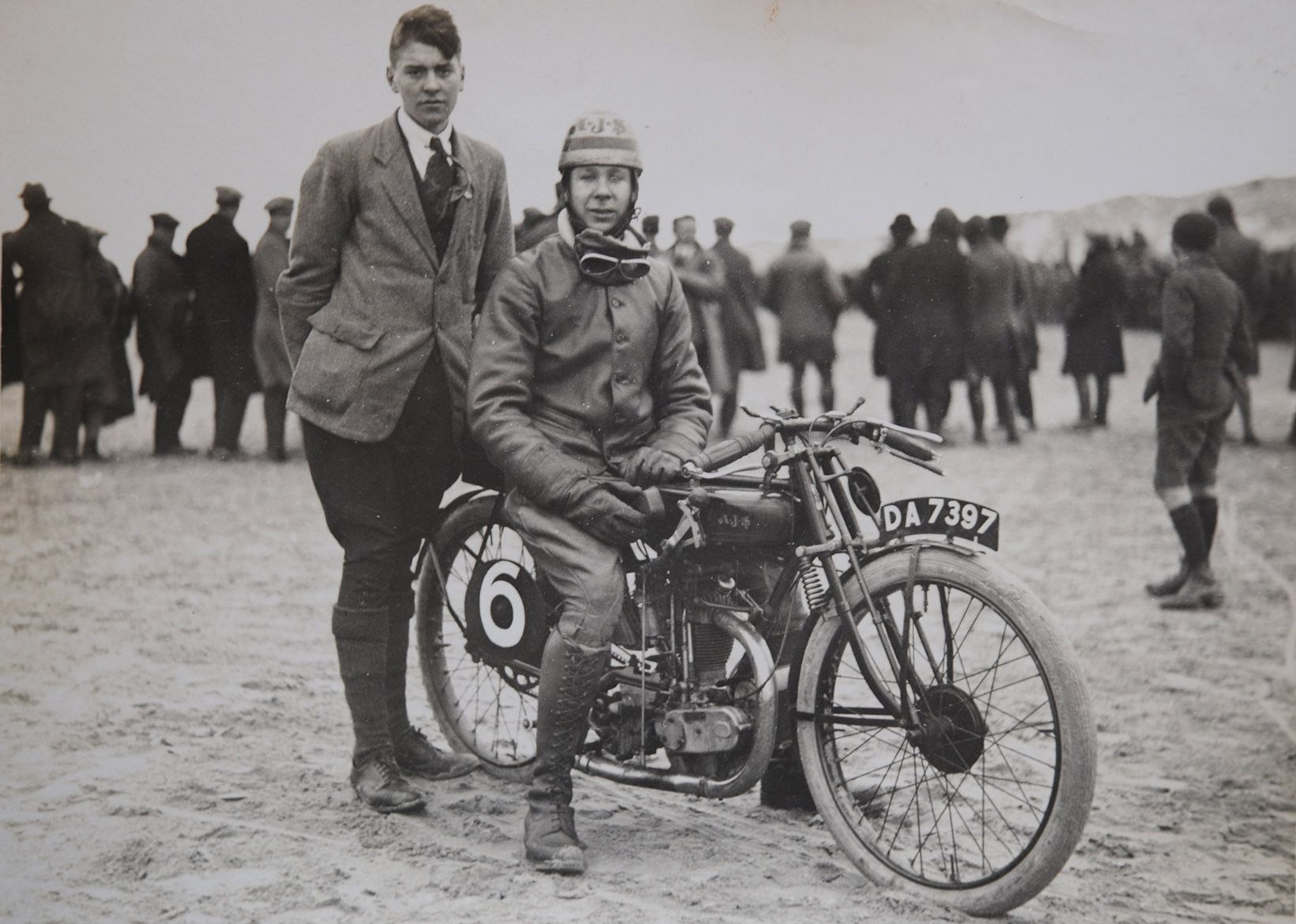 Hartford Stevens on his 350 AJS after setting the first 100 mph average for a 350 cc machine at Pendine Sands.

By the mid-1920s, the Stevens brothers were running a big business, making sidecars, a 10-horsepower car, commercial vehicles as well as a large range of motorcycles. One brother, Harry, had branched out to make radios. Other members of the Stevens extended family had joined the work force, including Joseph Hanford Stevens, himself a fine racing rider who won several major continental races including the Belgian Grand Prix. In 1924, Hanford, as he was known, set the first official 100 mph average for a 350 cc machine, on Pendine Sands in Wales. As the decade drew to a close, the AJS company was becoming a victim of its own success and thirst for expansion, with the constant requirement for more investment capital. Hanford’s father, George, the second oldest of the Stevens brothers, had made pioneering trips to possible overseas markets, including Japan, and in 1931 Hanford was dispatched to USA, Japan and Australia on a similar mission. He returned to Wolverhampton in 1931 with a full order book and new agencies appointed, but he was too late. While Hanford was away, the Chairman of the Midlands Bank, Sir Bernard Docker, had switched off AJS’s line of credit, and collapse was almost instantaneous. The brothers faced up to their ruin in typically stout-hearted fashion, and with the sale of their private houses and assets, as well as those of the company, repaid a full 20 shillings in the pound. AJS had almost 3,000 workers at the time of its collapse, operating out of six factories. H. Colliers & Sons, makers of Matchless motorcycles, stepped in to swallow up the entire motorcycle assets of AJS, closing the Midlands factories and moving production to Woolwich in London to form Associated Motor Cycles. 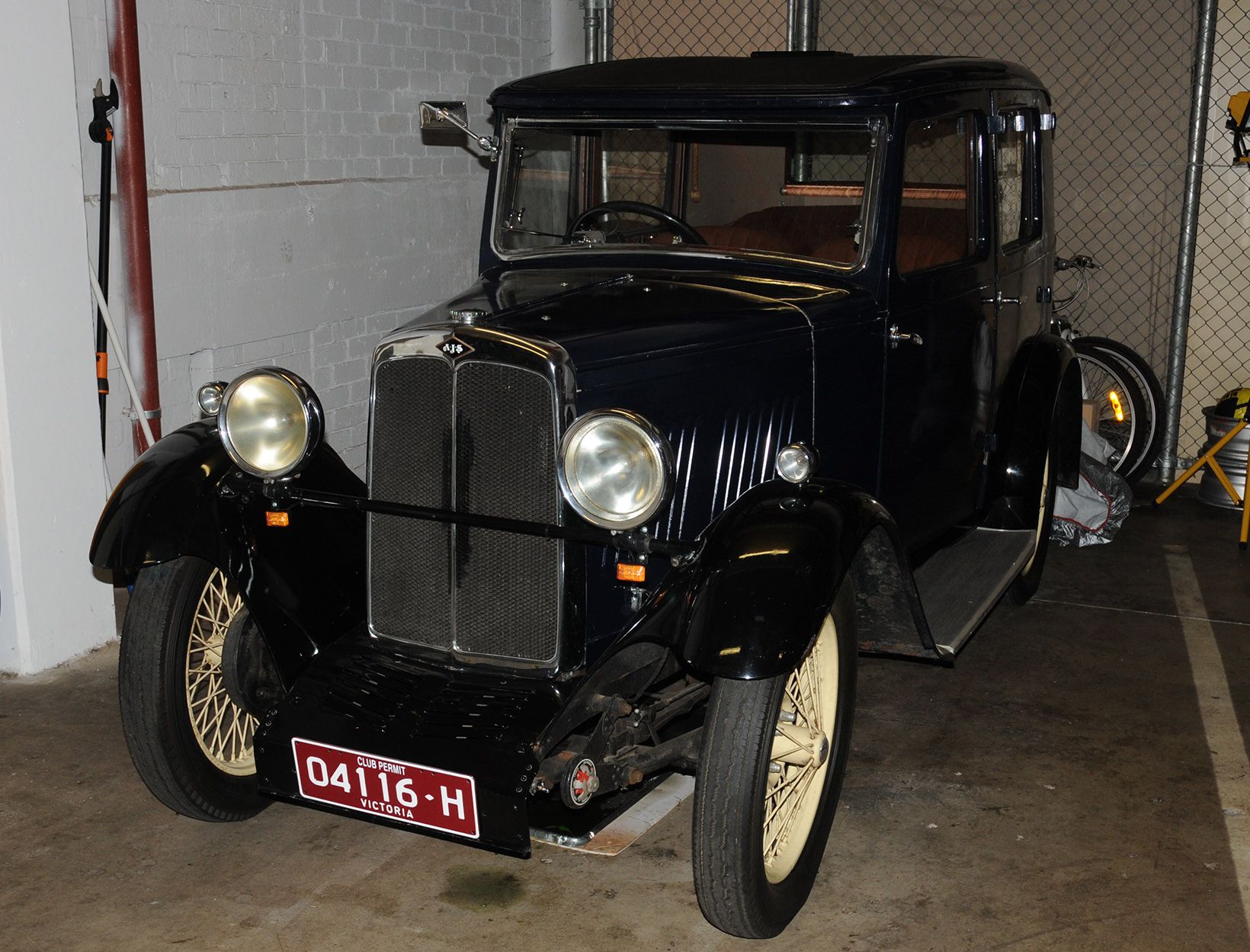 The AJS car owned by Colin and Meredith Stevens.

After the finalisation of the liquidation, the Stevens brothers managed to retain ownership of the original Retreat Street, Wolverhampton factory, where they set up to make their own motorcycles, which they named Stevens. They also reserved the rights to produce the AJS car. Originally the cars were powered by a 1018 cc side-valve Coventry Climax engine, but gradually the major components of the Climax were replicated and replaced by AJS parts. Although the engines were indistinguishable, it meant they were no longer beholden to Climax’s terms. However there was insufficient capital for the car production, which was sold off to the Willys-Overland-Crossley company in Manchester in January 1932 for £9,500. In place of the car, the brothers produced a three-wheeled light delivery van, an adaptation of an AJS prototype from 1921, powered by a water-cooled side-valve 588 cc  engine with chain drive, and this went into production in 1932. Priced at £83, the vans sold quite well.

The Stevens motorcycle was designed by Harry Stevens, and at least in the engine department, owed a great deal to the AJS. In fact, much of the tooling had been overlooked by (or perhaps hidden from) the Colliers during their cleanout, but it was all quite antiquated, and cash was in very short supply. So short in fact, that the motorcycles were built in batches of twelve, and the vans in runs of six, and one batch needed to be sold to provide the finance for the next. 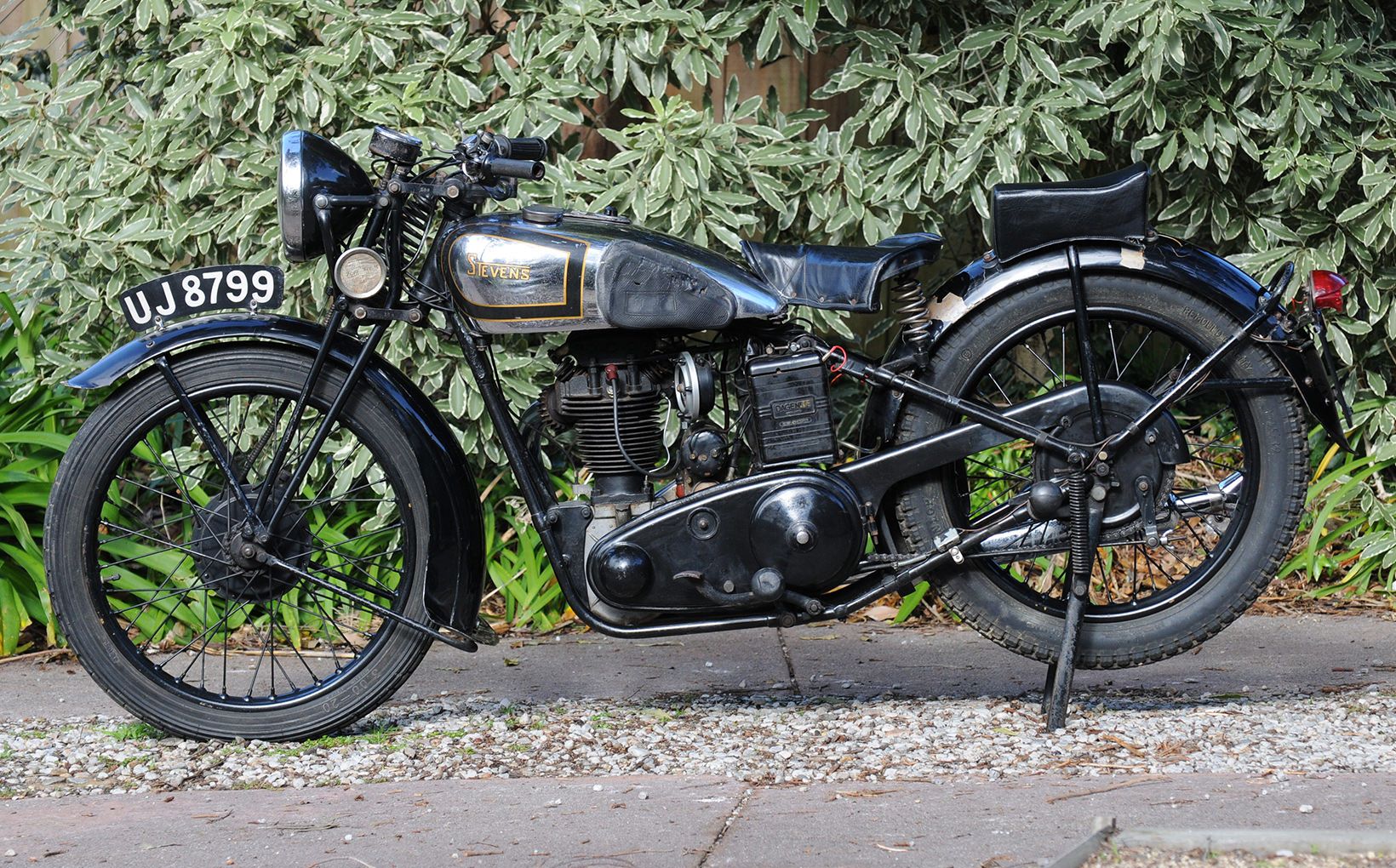 The 350cc Stevens owned by the Stevens family in Melbourne.

The first Stevens motorcycle was the 250 cc model, available as the D.S.1 (Down Swept Exhaust) and U.S.2 (Up Swept Exhaust) introduced in March 1934, joined by a 350 and a 500 the following year. The smaller two models shared one chassis design, while the 500 utilized a heavier gauge frame and forks. A feature of the design was the ‘Big Port’ – a 2-inch exhaust port, which mirrored the AJS, although the Stevens engine sat upright in the frame, whereas the AJS leaned forward. The frames were a very neat full duplex cradle design, with fully adjustable handlebars and seat positions. Initially the Stevens was finished in traditional black with gold striping, but later black with blue and gold striping, plus a chrome plated petrol tank, were available. Priced at a competitive £51, the 250 cc machines were well built and received some very good reviews – Motor Cycling magazine speaking in glowing terms of the 350 cc model L.L.4 it tested in late 1935, describing it as possessing ‘smooth, surging power, splendid controllability and great safety, commanding admiration and respect’. In April 1935 the 500 cc model, with a heavier, longer wheelbase frame, was added. This featured attachments for a sidecar, and there was also a competition version catalogued, with close ratio gearbox and lighter mudguards, at £69. 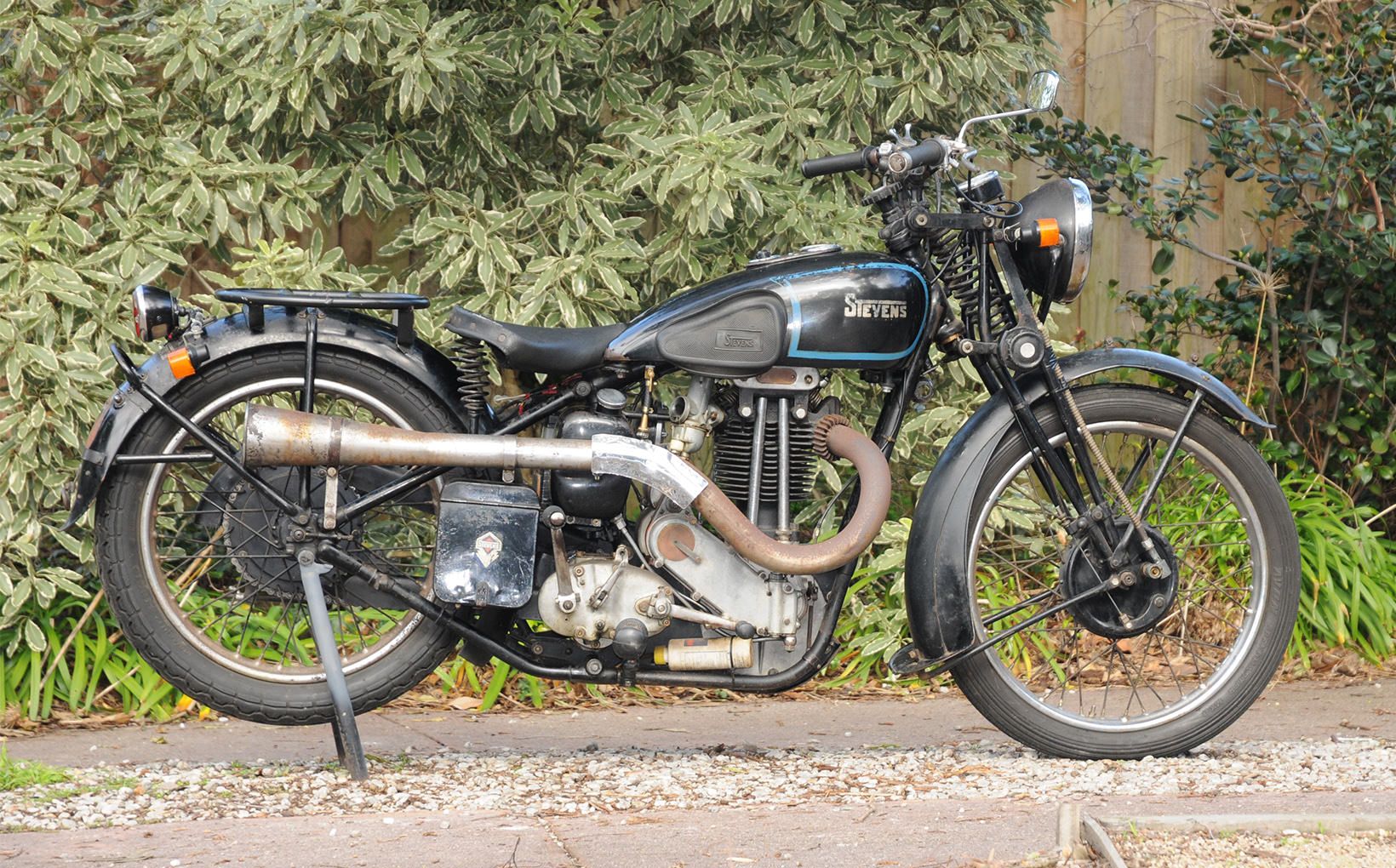 The Stevens concern pressed on with its modest production, which by 1936 was up to four machines per week, and for 1937 listed a model with a larger petrol tank and a unique megaphone-style silencer. But by the time the decade was into its closing stages, and with less than 1,000 Stevens motorcycles manufactured, the company, having struggled out of the Great Depression, was facing an even bigger calamity. With war imminent, the factory’s production was switched to the defence effort, and the final chapter in the Stevens’ family’s proud motorcycling history closed in 1938. Motorcycle production gave way to general engineering, which continued throughout the war years.  Stevens Brothers (Wolverhampton) Ltd, was acquired in the mid-1950s by former AJS works rider Leo Davenport and continued with general engineering contract work, including that for the Stevens Screw Company, in the Retreat Street factory until it closed in 1992.

The old AJS factory at Graisley Hill was eventually demolished to make way for a supermarket. In 1996, a sculpture, called The Lone Rider, was unveiled by Geoffrey Stevens to commemorate the motorcycling heritage of the site. 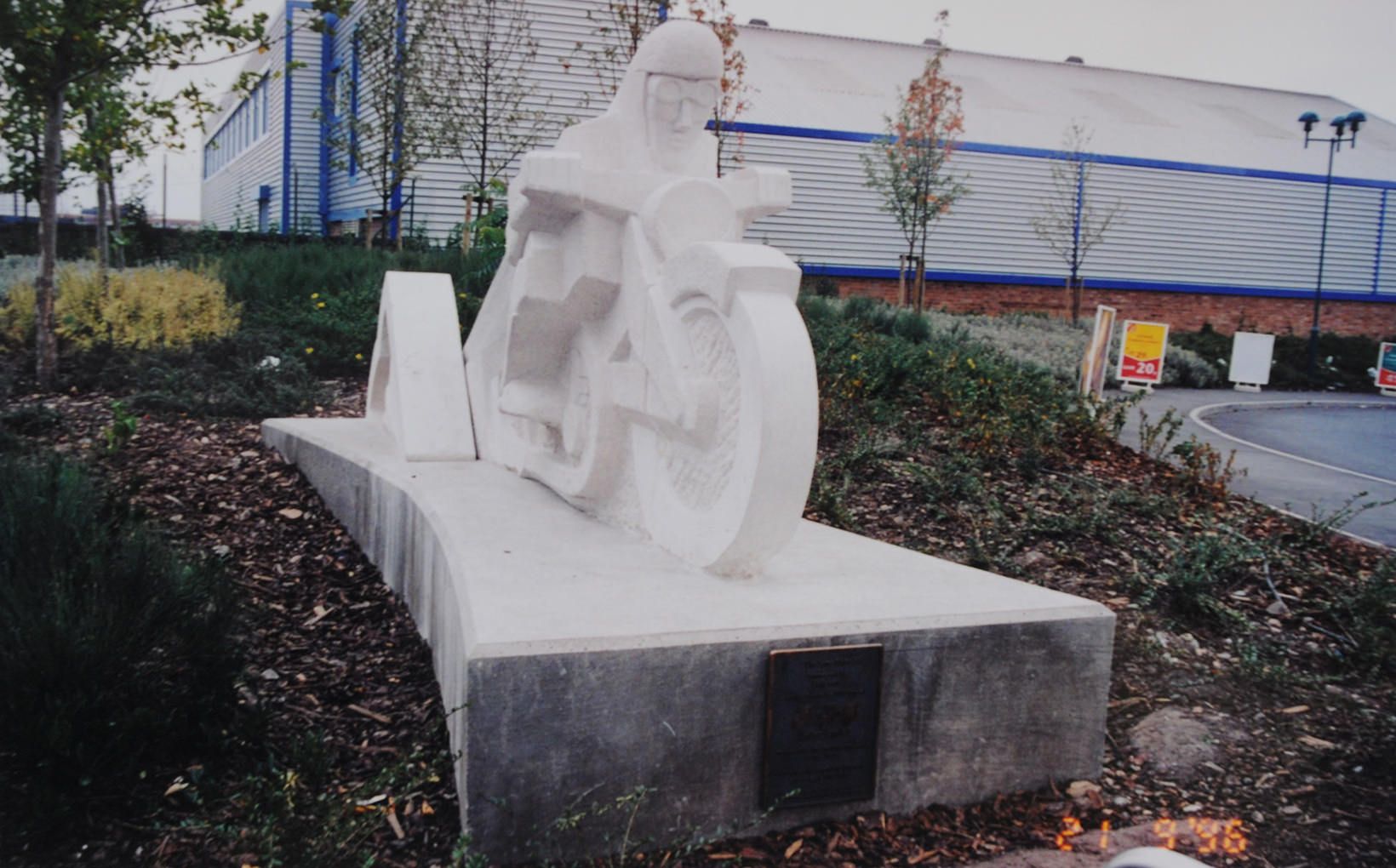 The Lone Rider - a sculpture to commemorate the site of the original AJS factory in Wolverhampton, now a supermarket.

At the time of the cessation of Stevens motorcycle production, young Alec Stevens, son of the third brother Joseph, was 17 years of age and wanted some transport. His father scouted around the Retreat Street factory and gathered enough parts to build a 350 – the last Stevens machine made. Young Alec was in the Territorial Army at the time, and was stationed at Wales when war was declared. He was mobilised immediately, along with his bike, as the army was very short of motorcycles for use in the war effort. He became a Despatch Rider with the Royal Artillery but being too young to serve abroad, was soon parted from his machine, which went across to France, never to be seen again.

Indeed, few Stevens motorcycles have been seen since. The official Stevens register says there are only 16 examples left, which is a remarkably low figure from a production run of around 1,000. Six of those remaining Stevens motorcycles are in Australia, as is the last of the male linage of the original Stevens manufacturing family.

During WW2, Hanford Stevens was sent to Australia to supervise the manufacture of Bristol Beaufighter aircraft, which were made at Fishermen’s Bend in Melbourne. After the war he was sent back to Britain, but returned to Australia in 1956 and worked as part of a team that purchased aircraft such as Canberra Bombers and Meteors for the RAAF. Hanford and his young family settled in Ballarat. His son, Colin, a retired architect is the last of the line and would probably not have cultivated an interest in the Stevens motorcycle story had it not been for the urgings of his wife Meredith, who bought him a surprise present for his 50th birthday – a 1924 AJS 350 side valve. Subsequently bitten by the bike bug, Colin, strongly encouraged by his sons Justin, Ben and Lachlan and daughter Brooke, began a hunt for the products of their forebears. When Alec Stevens passed away, he bequeathed his 1936 350 Stevens to Colin, and it was shipped to Australia. Since then, he has unearthed a 500 that was originally sold by Jowett Brothers in Launceston, plus another 500 that came from western Victoria. Colin and Meredith also own an AJS car.

Three other Stevens motorcycles – a 250 and two 350s – are known to exist in Australia, but all are currently non-runners, with restorations pending the availability of missing parts.