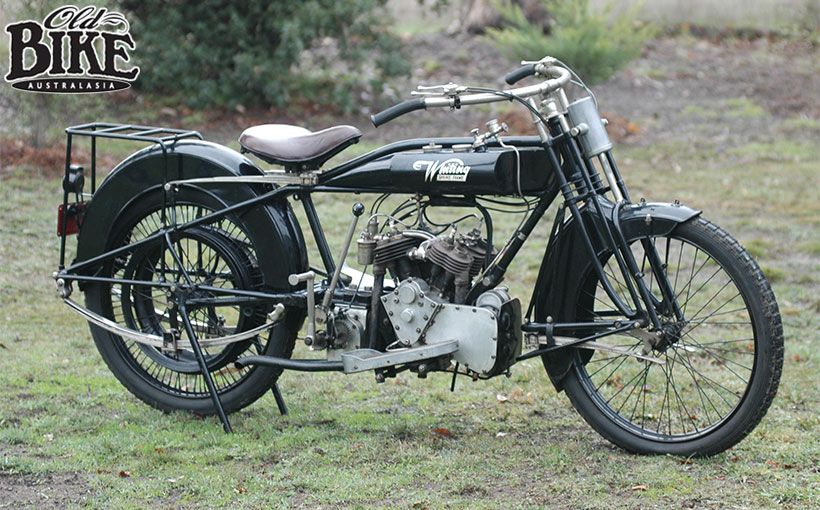 Words and photos by Jim Scaysbrook.  The Whiting restored to its former glory – an epic tale of perserverence.

Saville Whiting Esq., of Melbourne, was dissatisfied with the handling and comfort afforded by pre-WW1 motorcycle design. He had been a motorcyclist since 1905 and felt that a proper chassis should be complete with springing front and rear to be able to cope with the rutted tracks that passed as roads, at least in the Antipodes. With none available, he built his own, which used elliptical leaf springs on both front and rear wheels. He fitted a slightly modified Douglas engine and to prove his theories, rode the machine up and down Mount Misery, near Diggers Rest in Victoria. Reputation has it that the mountain earned its name because of its appalling surface, composed of rocks, tree roots  and rabbit holes, and certainly in 1913 it was pioneering stuff. But Saville and his motorcycle made it up and back without incident.

Whiting’s chassis used an inverted cylinder in front of the cylinder head, attached to the front axle. This acted as a pneumatic buffer, or a primitive damper, to prevent damage to the front springs in the event of a major shock. On smooth paved roads, the damper was de-activated by opening a petrol-style tap fitted to the top. 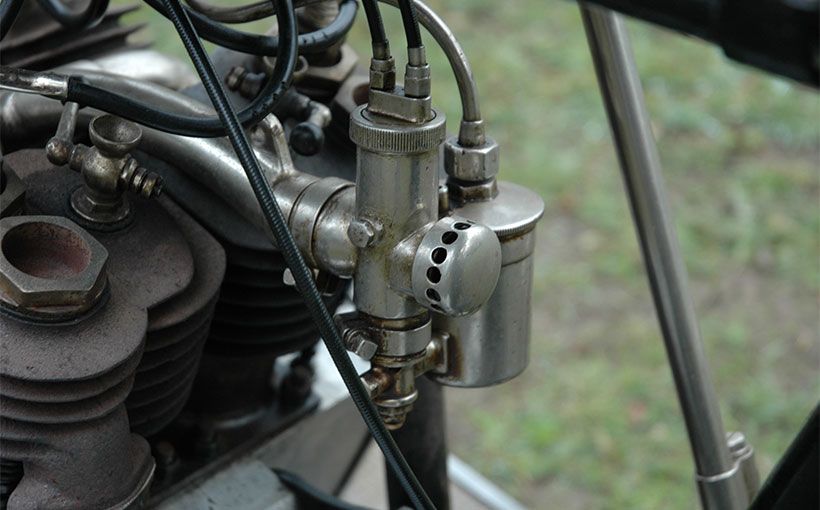 All four cylinders breathe through the single carburettor.

Clearly impressed with his own handiwork, Whiting crated the machine and set sail for England in 1914, where he hoped to find a market, or at the very least, a partner, to allow him to manufacture his product. Travelling with him on the ship was his friend Herbert Credgington, who ran a business in Little Collins Street, Melbourne, selling church ornaments, candlesticks, brassware and the like. He was making the trip to England to purchase stock for his business and it is believed he offered some finance for the project to Whiting.

In England, Whiting did the rounds of the motorcycle journals, extolling the virtues of his creation, and also hatching ideas for a motorcycle that would feature his own engine. The machine was subjected to numerous tests around Britain, clocking up around 8,000 miles, still on its original, Australian-made Barnett Glass tyres. The Douglas-engined machine, which also used some Douglas frame components, featured semi-elliptical springs front and rear, with Whiting’s front damping mechanism. The rear wheel was suspended in a swinging arm, with the axle attached to the springs by links. Whiting demonstrated the machine’s capabilities by riding up and down kerbs and gutters, and when Motor Cycling magazine tested it in March 1915, the writer was clearly impressed. “ We know by experience that it is impossible to drive a rigid frame machine along this road, which is a series of appalling pot-holes, at a speed of more than 10 or 12 miles per hour without the danger of breaking something, yet we drove the (Whiting) machine fitted with the new form of springing over these pot-holes at a speed of 25 m.p.h. and can say, without the least exaggeration, that vibration was almost imperceptible.” The magazine described the Whiting as ‘The last word in luxury.”

When tested in UK, the Whiting’s front and rear leaf suspension was described as “The last word in luxury”.

Later in 1915, The Motor Cycle magazine conducted a similar test on the original Douglas-engined machine, and the newly-constructed prototype of the proposed production model, fitted with a 4.5 hp JAP v-twin engine and Jardine four-speed gearbox.  The new machine featured an entirely new and heavily redesigned frame, with all the lugs made by Whiting himself, with provision for attaching a sidecar – the drawings for which Whiting had already completed.  Whiting accompanied The Motorcycle’s scribe on a ride from London to Brooklands, encountering badly pot-holed roads, tramlines, , cobblestones and wooden blocks, as well as some fast open-country motoring. “Altogether we were most satisfied with the Whiting Spring Frame, which certainly appears to fulfil the claims made by its inventor”, concluded the writer.

With Credgington acting as his agent, Whiting had high hopes of attracting a backer, but with the country now engaged in a war for its very survival, it wasn’t the ideal time to set up shop as a motorcycle manufacturer. Eventually he took on a partnership with Julian Forman, the principal of Blunt and Wray, Craftsmen in Metal, of London. It was planned to build three motorcycles initially, with Whiting’s 45-degree V-4 as the power plant. In the interim, the 4.5 hp JAP v-twin continued to act as an advertisement for the fledgling concern, although Whiting professed to be most unhappy with the Jardine gearbox, saying it was only fitted because of delays in receiving the preferred Sturmey Archer unit. 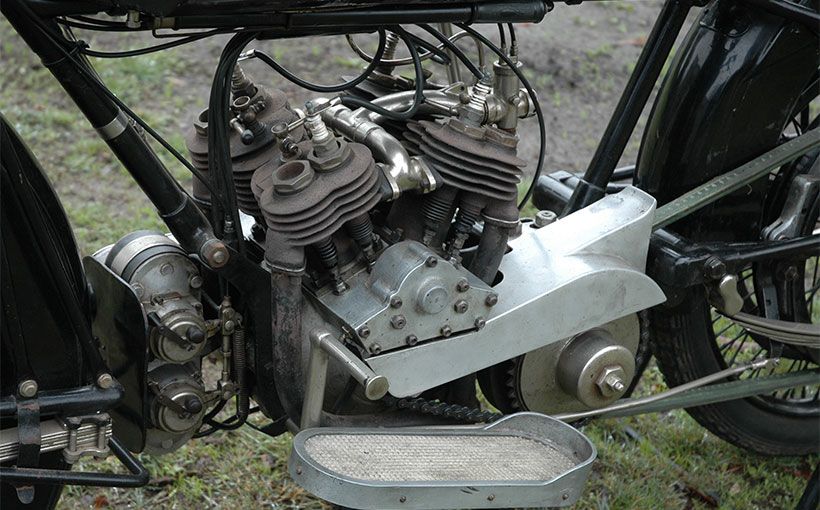 Drive side of the V4 Whiting, showing the twin magnetos and intricate induction tract.

Head and cylinder castings for the V-4 were done in the Midlands, but Forman’s London factory was now flat out with war work and little progress was made on the engine. When the war finished, virtually nothing was left to re-start such an enterprise, and Whiting reasoned he would have a better chance back in Melbourne. The original Douglas machine stayed in England, but the various components, patterns, drawings and castings for the V-4 were shipped back home, accompanied by Whiting, and the entire Forman family, arriving in late 1919. The JAP-engined machine found at buyer quite separately, at the very considerable price of 91 Guineas (F.O.B. Tilbury port) and was shipped to a new owner in Australia.

Back in Australia, Whiting and Forman purchased a disused factory in Richmond, Melbourne and prepared to put the machines in production, but funds ran out and the Formans returned home. At least Whiting had been able to complete a running V-4, which was fitted with a modified front end featuring half-elliptical springs.

Whiting rode his creation for two years, and this included an epic trip from Melbourne to Adelaide and Mildura and back. Although the V-4 covered the journey without major problems, Whiting professed to be disappointed in the overall performance and handling, and lost interest. It was put into storage until 1947, and eventually the bike was given away on the understanding that it be broken up. Some five years previously, the alloy castings went out as scrap, and the wooden patterns burnt. By 1950, the Whiting was just a distant memory to its creator.

Enter Jack Nelson, doyen of the Victorian veteran scene and hugely knowledgeable in all matters concerning our earliest motorcycling heritage. 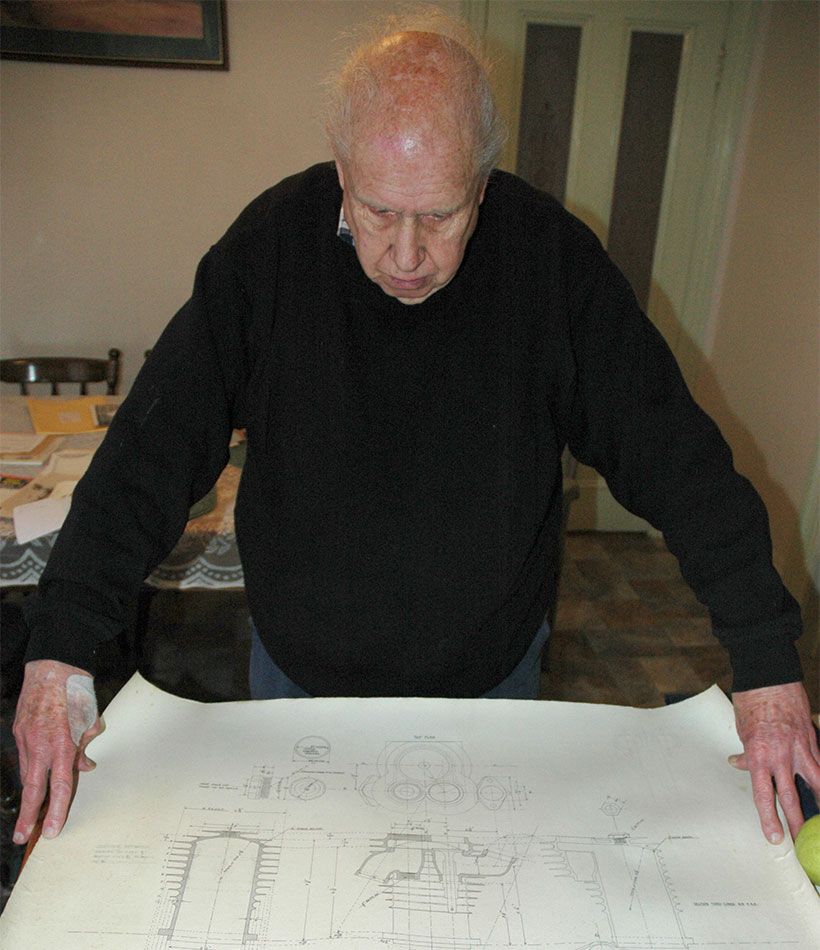 Jack Nelson with the original blueprints drawn by Saville Whiting.

“My first contact with the Whiting Motorcycle was in 1958, when I bought a 4-cylinder motorcycle engine of unknown make from Melbourne Auto Wreckers in Fitzroy. The engine was rigged up in a wooden frame suggesting that it had been fitted to a boat. Jack Vickery, who ran the motorcycle side of the wreckers, said the engine was all he had.” Nelson was not convinced, and much ferreting in the back yard eventually revealed the frame, gearbox, forks, handlebars, seat and one wheel. Things were looking up. In the Second Hand Dealer’s book at the wreckers, Jack found the original entry of the acquisition of the components, from a plumber in Sackville Street, Kew.

“I went around to this big old mansion, which had been turned into a boarding house, and spoke to the lady in charge, who confirmed a plumber had lived there for a while, but had since vanished. I asked here in this fellow had been building a boat, to which she replied, “yes” and she led me to a tree in the back yard. Searching around amongst the grass and weeds I uncovered the missing wheel, mudguards, engine plates and a few other bits!”

Inspired by his pile of parts, Jack decided the next step should be to track down Mr Whiting himself. This proved not too difficult, as Saville Whiting was in the phone book and living at Brighton. “After the shock of finding out that his bike was going to be resurrected, he was most helpful in providing photographs, giving information, and providing me with a set of original drawings for the engine. Mr Whiting proved to be a very clever and gifted engineer. He designed and built an automatic record changer long before they were on the market in this country. His paintings hung around the walls of his home and are excellent.”

One missing item was the petrol tank, and no drawings existed, but Mr Whiting recalled that when it rained, water would run over the sides and drip straight onto the spark plugs, so Jack was able to get an accurate measurement to scale the new component. Jack eventually worked out why the tank was missing. “When Mr Whiting rode back from Mildura, he fell off many times in the sand, and as the frame didn’t have steering lock stops, the tank got smashed. He rightly felt that the front suspension was too soft as it kept bottoming over the bumps, and at one stage he got a used tennis ball which he acquired from some children in a village and managed to stuff it into the damping cylinder above the forks, where it worked as a buffer. I remember him saying that it really needed two tennis balls!”

In rebuilding the historic machine, Jack complied with Whiting’s original intentions and replaced the troublesome Jardine gearbox with a two-speed Sturmey Archer, which works well. “The wheels were still fitted with the original Barnett Glass tyres, which were so hard I had to cut them off with a hacksaw, and I also fitted Lucas ‘King of the Road’ acetylene lighting.”

After ironing out a few teething problems, The completed Whiting V-4 proved to be a willing performer and certainly a stand-out wherever it appears. Starting is a first-kick affair after the cylinders have been individually primed with fuel, and Jack Nelson says it is a comfortable and fine-handling machine on the road.

Saville Whiting passed away in July 1973, aged 84, but his motorcycling legacy remains. Today, V-4s are commonplace, but in 1919 it was a different story altogether. But for the intervention of WW1 and the resulting economic conditions, Whiting could well have had a world-beater on its hands, but without Jack Nelson’s intervention, the story, and the machine, would have been lost forever.

Protect your Whiting. Call Shannons Insurance on 13 46 46 to get a quote today.