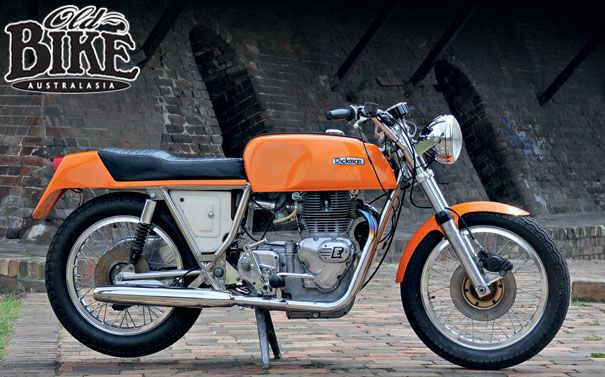 Launching a parallel twin sports bike in 1971, powered by an engine with its origins stretching back to the 1950s, at a time when the motorcycling world was going gaga over the new Japanese multis, and to a certain extent, the British triples, would seem in hindsight to be sheer folly. Yet this is what the Rickman Brothers, Don and Derek, did with their new Rickman Interceptor – a marriage of the superb Rickman chassis and the venerable twin cylinder OHV Royal Enfield powerplant.

In effect, this union wasn’t as felicitous as it may have seemed. Rather, it was the result of a number of factors that combined, rather unfortunately in some cases, to give birth to a machine that is today regarded as a classic in its own right. The tale really began with the energetic and resourceful American Floyd Clymer, born in Colorado in 1895, who became famous as USA’s youngest Ford dealer while still in his ‘teens. He was also an accomplished racer of Harley-Davidsons and Excelsiors, operating dealerships for both marques. Before 1920 he ventured into publishing with a magazine he called Motorcycle Topics, as well as promoting races in California where he had taken over an Indian dealership. He became a passionate supporter of the Indian brand and when the famous company finally closed its doors in 1953, Clymer purchased the rights to the name and began a series of mainly ill-starred endeavours to manufacture and market motorcycles using the Indian name. Most of these originated in Italy, where he had strong relationships with component manufacturers and specialist builders of frames and the like. After selling his magazine ‘Cycle’ in 1966, he went all-out to crank up Indian, even to the point of spending a small fortune to have a prototype built using an allnew v-twin engine. Prior to this, Clymer had commissioned a classically-styled 500 cc single built mainly by Leo Tartarini’s Italjet concern and powered by a Velocette Venom engine, then turned his attention to something for the bigger-capacity segment.

In a deal with the Birmingham-based wholesalers P. Mitchell & Company, who had export contracts for both Velocette and Royal Enfield, Clymer agreed to commission a batch of bikes to be known as Indian Enfields, using Series 2 Interceptor engine/gearbox units in an Italjet chassis. Mitchells subsequently ordered around 600 engines from Royal Enfield in Redditch, and most of these were sent to Italy ready to become Indians. From 1967, a trickle of the Clymer Indian Enfield 750s were constructed, being visually very similar and sharing many components with the Clymer Indian Velocette of which around 250 complete examples were built with the majority going to USA. Then came the double whammy. On January 23rd, 1970, Clymer suffered a heart attack and died at his home in Los Angeles, and a few months later Royal Enfield lost its battle with creditors and ceased all motorcycle production. That left Mitchells with a swag of Enfield engines, no chassis and no sales arrangements. It was a similar story with Velocette; by now moribund and unable to keep up a reliable supply of engines for the Italjet frames. 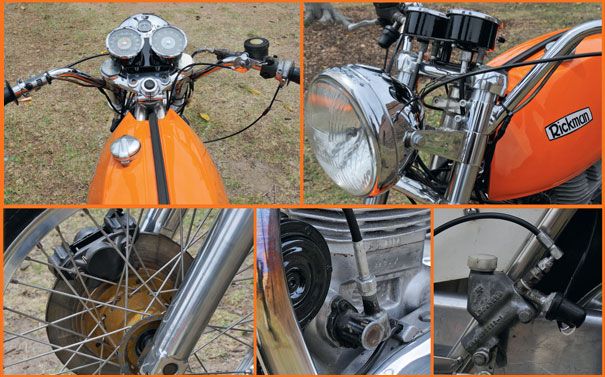 Actual numbers are sketchy, but around 200 Enfield powerplants were still owned by Mitchells and remained in their Birmingham warehouse when the Clymer empire collapsed. The Enfield donk, in its Series 2 form, was a reasonably potent unit, producing around 40kW, and cured of most of the faults that had plagued the earlier Redditch twins. These had started life as the 70 mm x 90 mm 693 cc Meteor in 1953 which produced just 36 hp. Just like the company’s single-cylinder Bullet engines, oil for the dry sump twin was carried in a cast-alloy compartment at the rear of the crankcases. The 40 hp Super Meteor followed within a couple of years and finally the 51 hp Constellation appeared in 1958. One aspect of the Enfield design set it apart from other British twins, in that the engines were all dynamically balanced at the Enfield factory, making them noticeably smoother. But the Constellation, with its massive crankshaft, savage cam timing and racing style Amal TT carburettor, was fragile and suffered from poor crankcase ventilation that inevitably resulted in oil leaks. Crankcases were also known to distort under load, further adding to the oiling problems and overall reliability.

To combat the big 750 twin from Norton, Enfield stretched the Constellation to 736 cc with dimensions of 71 x 93, with a sealing ring system replacing the easily blown head gaskets and redesigned cylinder barrels that were interchangeable side to side. Strengthened crankcases with an extra engine mount went some way towards correcting the inherent flex in the crankcases, and models destined for the export market received 12-volt electrics rather than 6 volt. The mods only produced one more horsepower, but the Interceptor was a better unit all round than its predecessor.

The Royal Enfield story actually looked to be all over in 1962 when chairman Frank Walker-Smith died and the Reddditch works closed, but production shifted to a subsidiary company at Bradford-on-Avon. 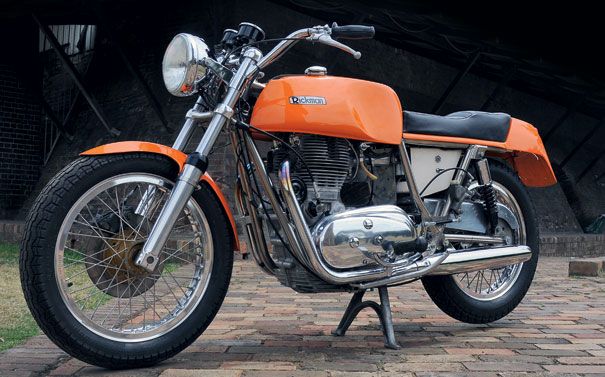 So when the Clymer/Indian/Italjet crisis occurred, Don and Derek were the logical choice to rescue the situation. Michells agreed to fund the production of seven complete machines to test market reaction and to be used as demonstration models. The frame closely resembled the road race model, with the cradle splayed to allow the Interceptor’s crankcases to fit between them. From the outset, Metisses (at least the four strokes) had dispenses with separate oil tanks and carried engine lubricant in the frame tubes, but with the Mk2 Interceptor’s wet-sump design, this was not necessary. The Rickman Interceptor looked sensational with its humpy dual seat, ‘clip-up’ swan-neck handlebars clamped to Rickman’s own front forks, and the fibreglass finished in the powder blue colour that had been used on many of the scramblers, as well, coincidentally as on the few Clymer Indian Enfield 750s produced. Subsequent models generally featured a unique (for the model) orange décor. In place of the road racer rear-set footrests and brake/gear lever, a conventional set up with forward-mounted, rubber-capped footrests was used with Enfield’s traditional ultra-long travel gear lever and its quirky separate neutral-finder lever.

The twin Smiths instruments were standard fare for the period, along with the Lucas headlight, Dunlop tyres and Borrani alloy rims, and Lockheed disc brakes front and rear. There were nice Metisse touches like the method of rear chain adjustment by the use of eccentric plates that fit under the nuts securing the swinging arm pivot to allow progressive chain adjustment in increments of 1/32nd of an inch. While road testers marvelled at the machines impeccable manners and finish, it was undeniably rooted in the past with a plethora of new oriental superbikes ranged against it in addition to the BSA/Triumph triples and even Norton’s Commando. Home (UK) price was set at a competitive £750, while a few bikes went to USA and were advertised at US$1,695 – and you could even have a spare engine for an extra $550! In London, Elite Motors of Tooting was appointed exclusive distributors, but sales were sluggish and the retail price soon dropped to £550 – a bargain. The ploy worked and sales rose sharply, but when Elite tried to order further stocks, they were told the supply of engines had dried up. According to Rickman records, 138 Rickman Enfield Interceptors were produced between late 1970 and early 1972 (although all are listed as 1971 models), making the bikes rare and collectable today. Rickmans themselves didn’t miss a beat, pressing on with the same basic design using Triumph engines including the 8-valve unit and later, Honda CB750 and Kawasaki Z1 versions. 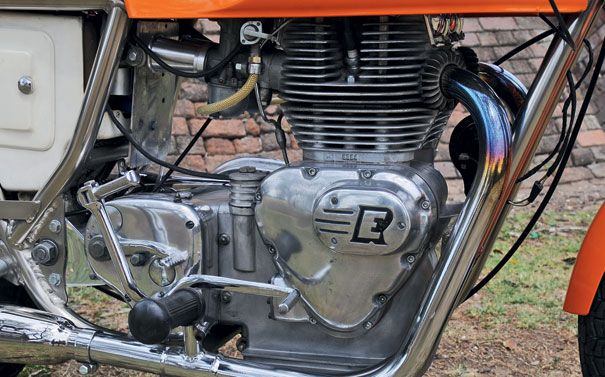 Enfield engineers went to great pains to cure oiling problems, both internal and external, in the Mk2 engine. Small auxiliary lever on the gearbox is Enfield’s famous neutral finder.

One for the colonies

Very few of the 138 Rickman Interceptors went to markets outside of US/Canada or UK, and there are only a handful in Australasia. A recent arrival from USA belongs to John Matthews, who is the man who has championed the Metisse cause in these parts for many years. John recently established a Metisse register; an attempt to bring owners of all sorts of Rickman products together, unearth lost bikes and to assist with spares and replacement parts. He has owned many examples of the Matchless-engined Mk3 scramblers, and keeps in contact with likeminded enthusiasts around the world. One of the Metisse brethren is Los Angeles-based Olav Hassel – a man who also collects and restores Velocettes and other British bikes. The Rickman Interceptor featured here was part of Olav’s extensive collection until John purchased it recently, and was originally sold to a UK owner through Elite Motors.

When I had the opportunity to photograph John’s new toy, it was fresh out of the crate and as yet unstarted, but John sees no impediments in having it on the road very soon. Even as an un-restored machine that has just celebrated its fortieth birthday, the Rickman looks clean and mean, a perception enhanced by that beautiful nickel-plated frame, which in the day was referred to by one American road tester as “the star of the show”. It really is a collection of the best of British componentry of the time, and the vivid vermilion fibreglass certainly presents a stunning package. For all the attention to detail however, I can’t help wondering what went wrong with the air box, which looks to me like a kitchen cupboard door. Surely a neat colour-matched panel would have been better? Being a Metisse purist, John has not ruled out re-doing the fibreglass in the traditional Rickman livery of British Racing green, but I kind of feel this would drab-down the impact a bit. The Enfield engine is certainly a formidable looking lump and very distinctive, despite the triangular timing cover that is very reminiscent of unit-construction Triumph twins. Whichever way he decides to go with the hue, John certainly has a unique motorcycle; one born out of necessity and the best intentions that reeks of ‘seventies flair. 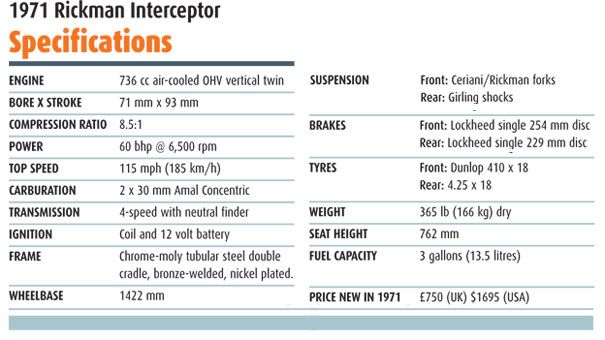 Protect your Rickman. Call Shannons Insurance on 13 46 46 to get a quote today.

Stevens. The before and after of A.J.S.