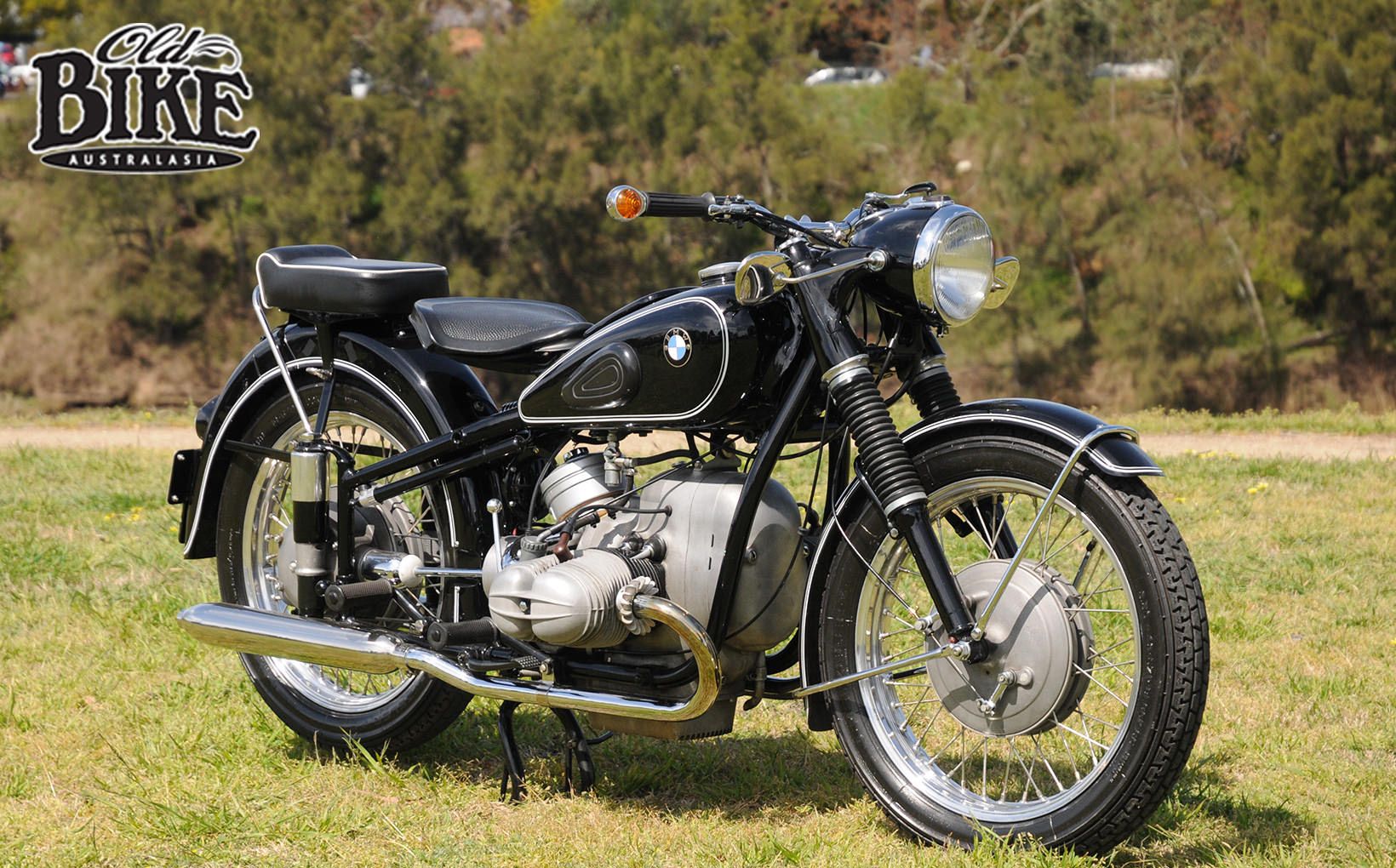 The R68 is the rarest post-war BMW, with a sporting pedigree that rekindled the marque’s interest in competition.

The first post-war twin, the R51/2, appeared in 1950 – an overhead valve 494 cc opposed twin along the lines of the pre-war R51 with plunger rear suspension similar to the successful race bikes. The proven telescopic forks, first seen on the R12 in 1935, were further refined with longer travel and better hydraulic damping. The first R51/2 model in Australia went on sale in January 1951. Developing 24 hp at 5,800 rpm, the R51/2 used what was official known as the 254/1 engine, with a slightly lower compression ratio (6.3:1) due to the poor post-war fuel. 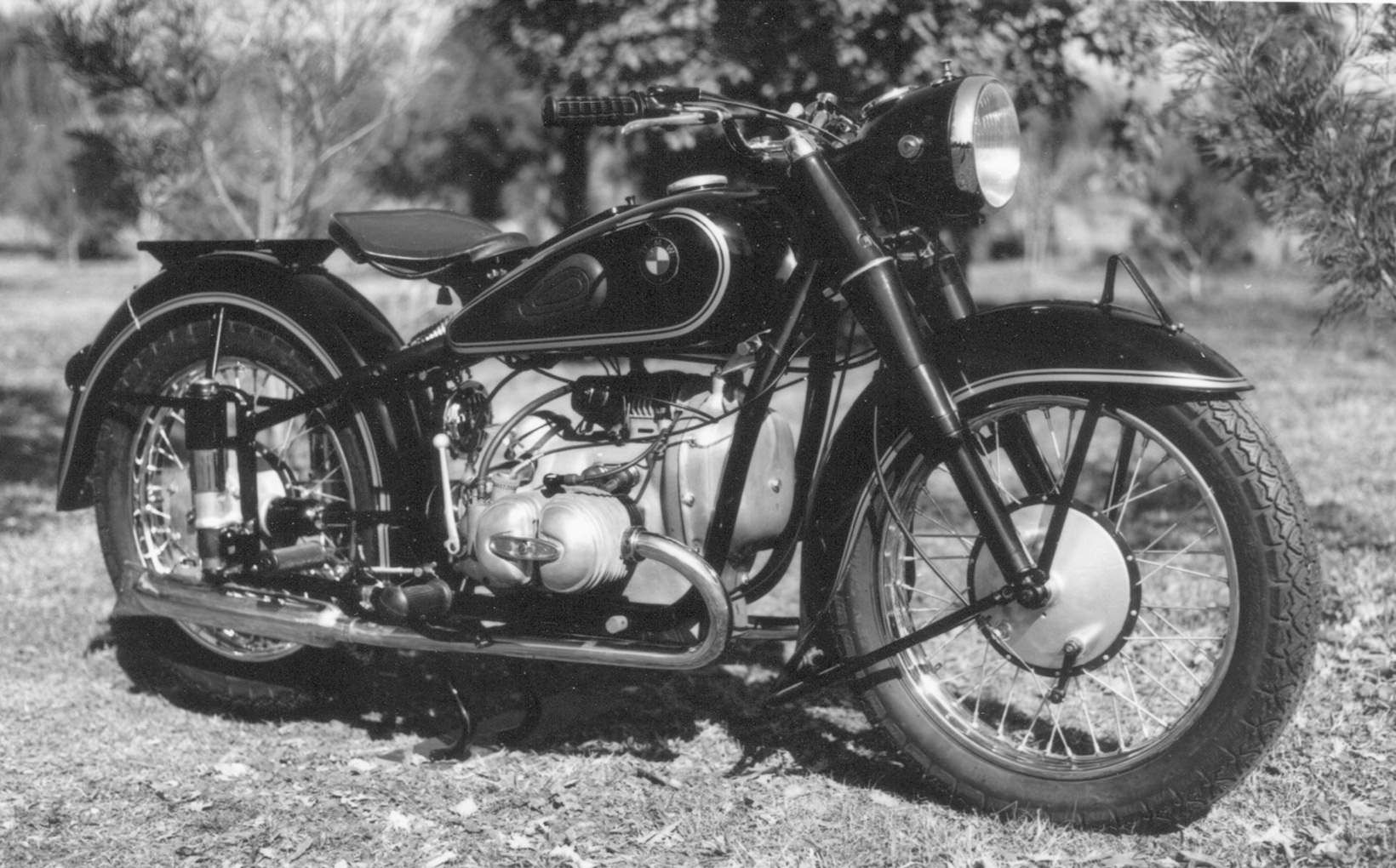 An all-new model was already in the pipeline and made its public debut at the first post-war German International Motorcycle Show in Frankfurt in October 1951. The R68 was the sensation of the show, due in no small part to the manufacturer’s claim of a 105 mph (168 km/h) top speed from the 594 cc engine which had redesigned cylinder heads, cams, and timing gears, with a racing magneto, a compression ratio of 8:1, and bigger bore (26 mm) carburettors. The actual model displayed was, in today’s parlance, a ‘GS’, with high mounted exhaust pipes, but by the time it went into production, the specification had reverted to the conventional road styling, with downswept pipes fitted with pre-war type ‘fishtail silencers’ with their flattened vertical end sections.

BMW claimed 35 bhp at 7,000 rpm – enough to stay with the British singles of the day. Visually, the powerplant looked little different, with only the rocker covers (featuring two horizontal fins instead of 5 on the R67) and the air filter housing to distinguish it. Initially, the early style front brake was used, but with a twin-leading shoe backing plate where one lever and cam were operated by the cable out, while the other was pulled by the inner cable.

A new finned clamp connected the exhaust pipe to the head and needed a special tool to undo it. Adding to the sporting nature of the R68 were new slim mudguards to replace the deeply-valanced items seen on the pre-war models and the R51/R67. The typically German spring rubber saddle was retained, but a substantial pillion seat was available as a precursor to the full dual seat which appeared a few years later. There was also a chromed rail for the pillion to grip. From 1954 (the last year of production for the R68), a full-width alloy front hub with straight-pull spokes was used, and the upper forks sported rubber gaiters rather than metal shrouds. During its 3 year production period, only small improvements were made. Cigar-shaped mufflers replaced the original fishtail style, and alloy rims replaced painted steel.

As sporting as the R68’s engine was, the whole package was hamstrung by the pre-war chassis (introduced on the 1938 R51) and particularly the plunger rear end, which produced very vague handling, particularly when pushed hard. 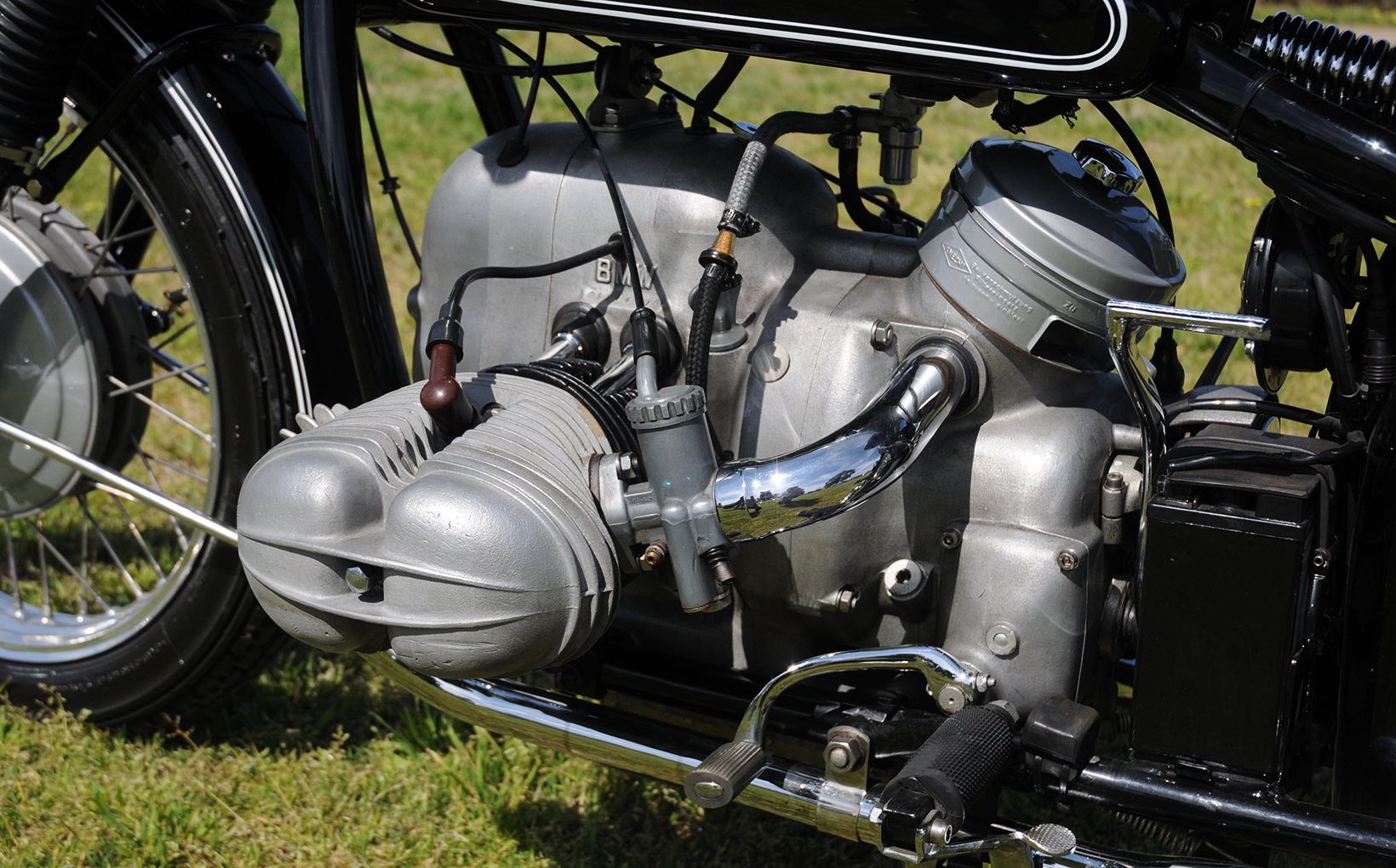 The design that came to denote high-performance BMWs - the two-fin rocker cover.

There were just 1452 examples of the R68 made, making it the rarest post-war BMW. Undoubtedly the main reason for the small sales was the price – 3,950 Dm in 1952. Its sporting replacement was the revered R69, introduced for 1955 with the new Earls-type leading link forks, swinging arm rear and dual seat, but engine-wise not that different from the R68, although a few kilos heavier. The new chassis transformed the package however, providing sharp handling to match the pokey engine. The two-fin rocker box was retained and became a symbol for all subsequent ‘sport’ model BMWs.

Philip Vergison is the owner of the featured BMW R68. “I bought this particular machine in 2002.  It was complete, but in a very neglected state. It was disassembled and restored - repainted, rewired, and rechromed and so on, with nearly all of the work done by my brother Adrian. The motor and gearbox were given the once over by Don Wilson.  In general terms, not too much was wrong with the machine.  There were certainly no signs of abuse. It was back together and on the road in 2006 and since then has covered 6900 km in service as a "club machine".

“Personal insights? Well, like any BMW of the 50s and 60s, it's an easy starter after a generous flooding of the carburetors when cold. It takes a while to warm up and then, because of its heavy flywheel, it ticks over very slowly for a twin. The throttle is a "two fist-full" arrangement with a long travel for the cables,  so you really have to wind it up to get any performance.

The rubber saddle seat and the positioning of the footpegs and handlebars encourages a sporty, "leaning into the wind" posture for what must have been the average mature male size of the era - somewhere around 5 feet 6 inches in height.  It certainly forces a cramped, jockey-like position if you are over 6 feet in height, as the short saddle doesn't let you slide back and stretch out.

The gearbox too is a 50s/60s era device; truck-like in its design and operation.  Anyone riding an old BMW for the first time, having earlier ridden a British or Japanese machine, is initially horrified at the long lever action, glacier pace and clunking noises that accompany a change of gear.  With some practice however and deft blips of the throttle when down-changing, swapping cogs can create a sense of personal achievement.  Being forced to think about every change, you certainly won't miss a gear or find a false neutral!

On the road, the machine is always willing to rev;  there's an audible induction drone from the airfilter as you accelerate, which blends well with the clicking of the valve gear, the whining of the gearbox and the flat, regular exhaust note to create that distinctive BMW signature sound. On club runs, it's happy to sit on anywhere between 90 and 110 km/h all day. And the brakes are more than capable of arresting progress!

The only downside to a day in the saddle is the plunger frame and the basic hydraulics of the telescopic front forks. There's not much "forgiveness" if you hit a bump at speed so you're always looking closely at the road surface ahead. But on a smooth road, it's a joy to ride; willing, capable with more than adequate ground clearance and a nice sporty note!