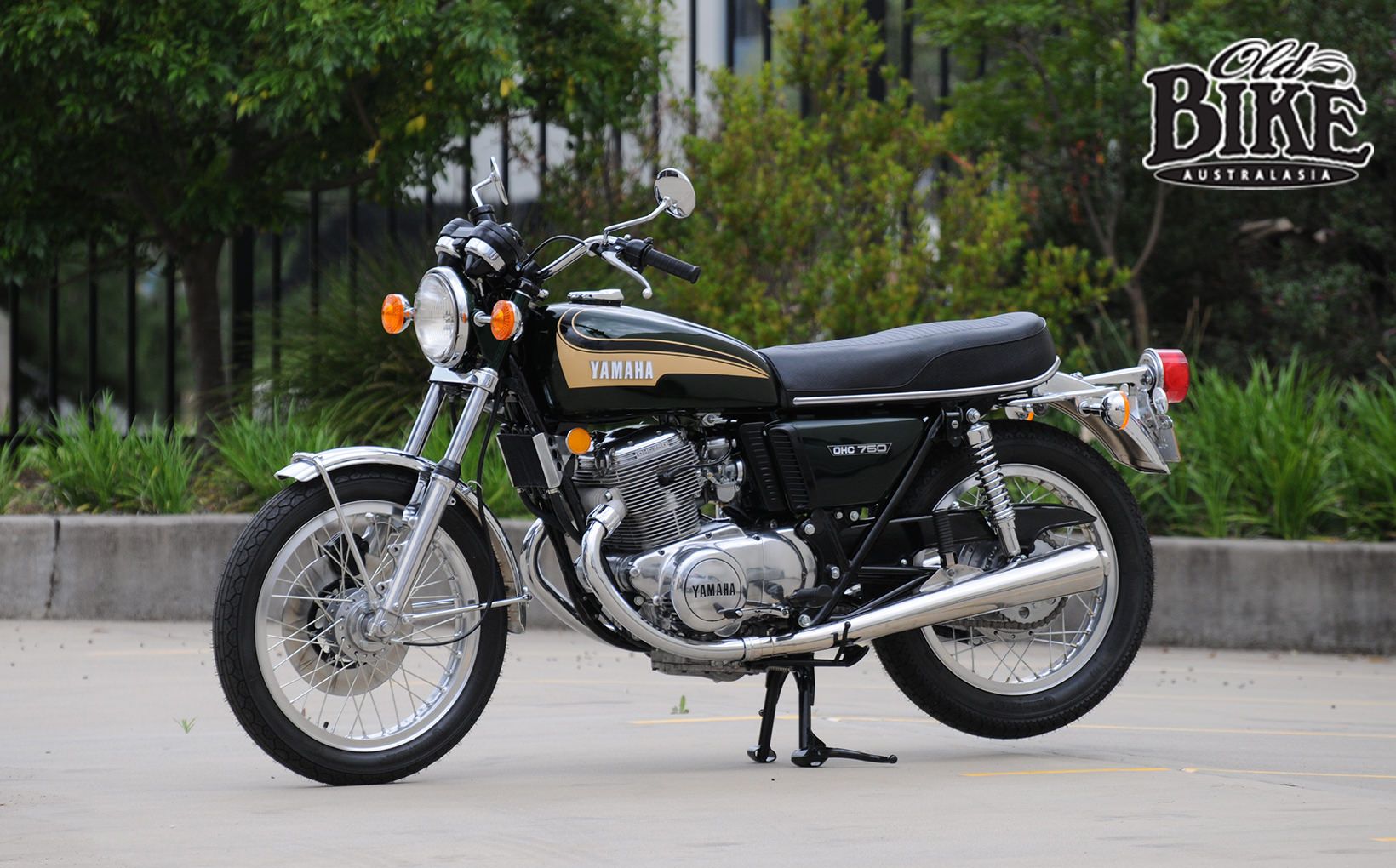 Everyone was going gaga as the 1970s dawned. Bigger, faster, heavier, were the buzz words when it came to motorcycles. More cylinders, bigger tyres, better brakes. In 1971, Yamaha teased the world with a four-cylinder water-cooled two stroke job that set the tongues wagging at the Tokyo Show, but it was a charade. What eventually transpired was not a four, or even a three, but a twin – a 360-degree 2 valve twin at that. The TX750 arrived in Australia for its world debut in July 1972, accompanied by Yamaha’s Managing Director,  Mr Hideto Eguchi. Actually 743 cc, the TX750 developed 63 bhp and Yamaha said it would be the forerunner of a whole new range of similar twins. Inside the engine was what Yamaha called an Omni-Phase balancer – a pair of weights with one designed to counter the primary imbalances created by the firing strokes, and the other to counter the rocking-couple that was created by the first balancer. This, Yamaha claimed, produced a twin with the inherent smoothness of a four, and by and large, the journalist who tested the early models agreed. 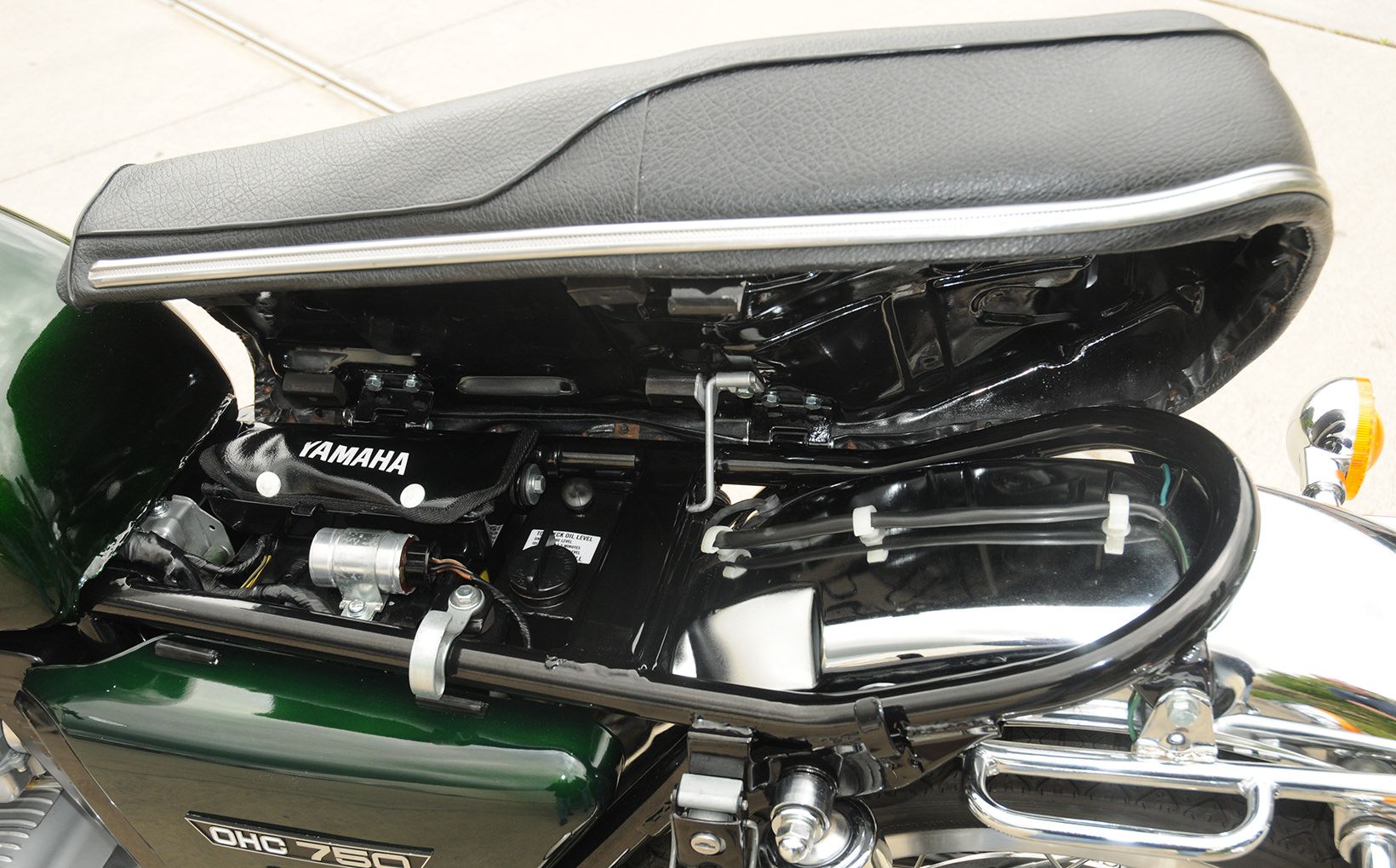 Even under the seat, the restoration is superb.

The engine had been designed with the looming threat of anti-pollution legislation in mind. Sintered alloy valve seats were used, and the crankcases ventilated by a system where gases were fed into the air box via a reed valve to be recirculated. The TX750 certainly handled considerably better than the other big twin in the range, the XS1/XS2 which had been renamed the TX650, and the five-speed gearbox actually came from the 650. Chassis wise, the TX750 didn’t break any new ground, but there were nice touches such as the valanced alloy rims, which were there primarily in the interests of weight saving – at 210 kg the TX750 was a bit on the hefty side.  The single overhead camshaft engine looked superb, all chunky polished aluminium alloy with a neat finned exhaust manifold that doubled as a balance tube between the two header pipes and further smoothed out the pulses from the counter-balanced twin cylinder engine. Although only a single front disc was fitted, there was provision for a second, with the mounts already on the left fork leg. European models received twin discs as standard. In Australia, buyers had a choice of dark green metallic with gold trim, red, or an all-gold décor. 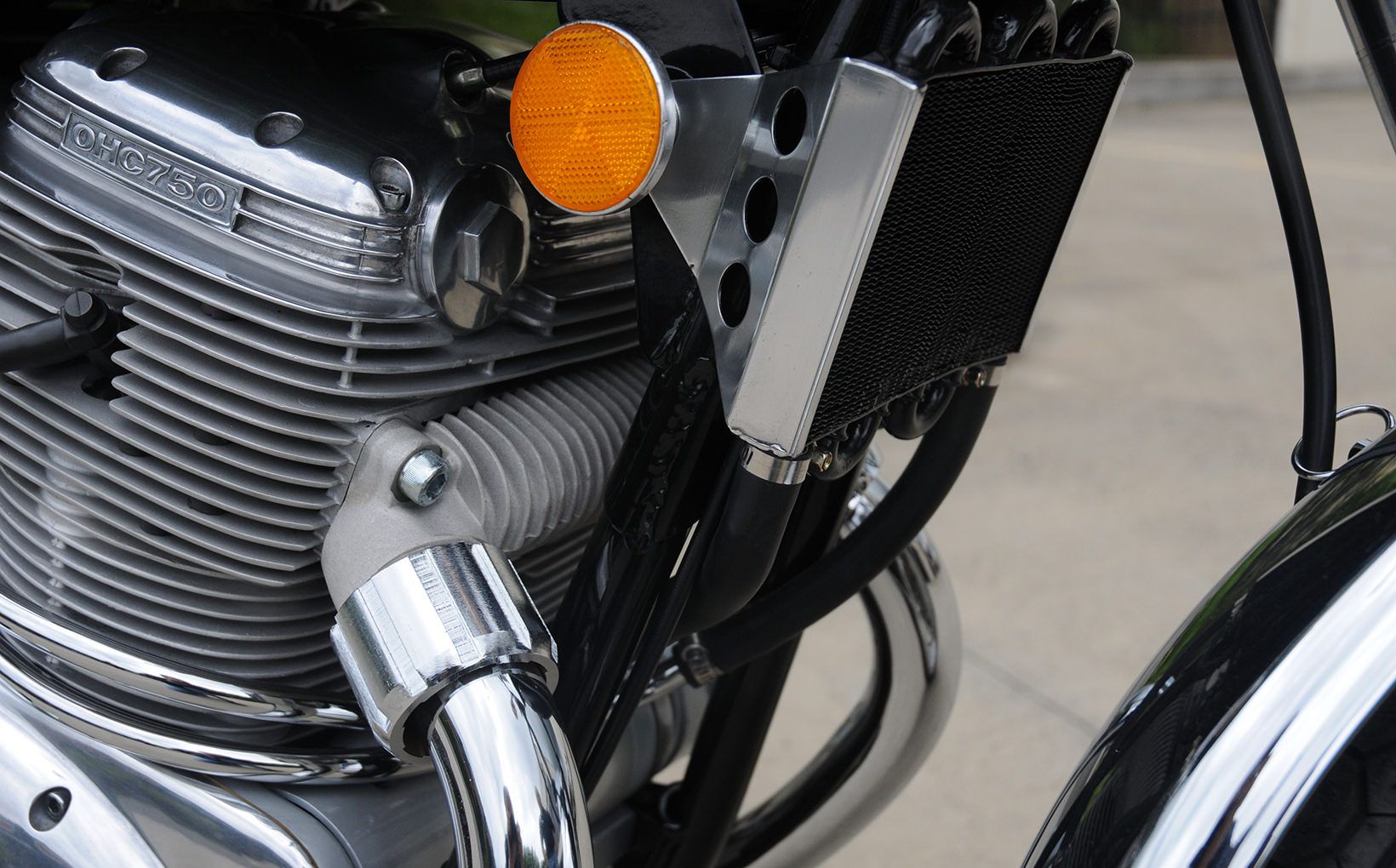 Instrumentation was quite extensive, for the time, with a cluster of lights to indicate oil pressure (or lack of it), a brake light warning, and a light to indicate when the rear brake linings dropped below 2 mm. The speedo and tacho were big and easily read, the latter incorporating a high beam indicator and neutral light.

The original TX750 that had been brought to Australia to appear in the Bankstown Motorcycle Show had subsequently done the rounds of the dealers before being pressed into service for what turned out to be a fairly shambolic attempt on several Australian endurance records in September 1972. Prepared by dealers Springs Motors in Eastwood, Sydney, the TX750 was taken to Oran Park with a three-rider team of Jack Ahearn and father-and-son Keo and Robert Madden. The plan was to attack the long-standing Australian records for one, twelve and 24 hours, but it came apart because of confusion over exactly who held these records and what speeds had been achieved. The Yamaha had to be stripped just prior to the attempt when it was found to have a bad oil leak and suffered a number of delays while on the track, at one stage shedding the exhaust system and then losing more than one hour after the alternator failed. When no solution could be found to the confusion over the existing records the attempt was abandoned after six hours – the team claiming a six hour record (which did not previously exist in the record books) of 370.23 miles at 61.68 mph. The Yamaha was then taken by to the workshop for a major overhaul before the same team fronted for the Castrol Six Hour Race in October.

It can’t get any worse, or can it?

The Castrol Six Hour Race at Amaroo Park was the jewel in the crown, and for 1972, Yamaha spared no expense in an attempt to grab the outright win with the new TX750. Star riders were signed up: Ron Toombs paired with Eric Hinton, 1971 winners Bryan Hindle and Clive Knight, Tony Hatton and Paul Spooner,  Bill Horsman and John Liebeknecht from South Australia, Mike Richardson and Graeme Allen from Queensland, brothers Allan and Graeme Osborne from Geelong, and the Madden/Madden/Ahearn squad. Hindle praised the Yamaha’s handling and brakes, and also added that the engine had more top-end urge than the CB750 Honda. It was also very light on petrol consumption, returning 63 mpg in tests. Throughout the practice week, the TX displayed ominous signs of chronic engine overheating and boiling lubricant. Then in qualifying on Saturday, Horsman crashed heavily entering the Armco-lined main straight. One down. 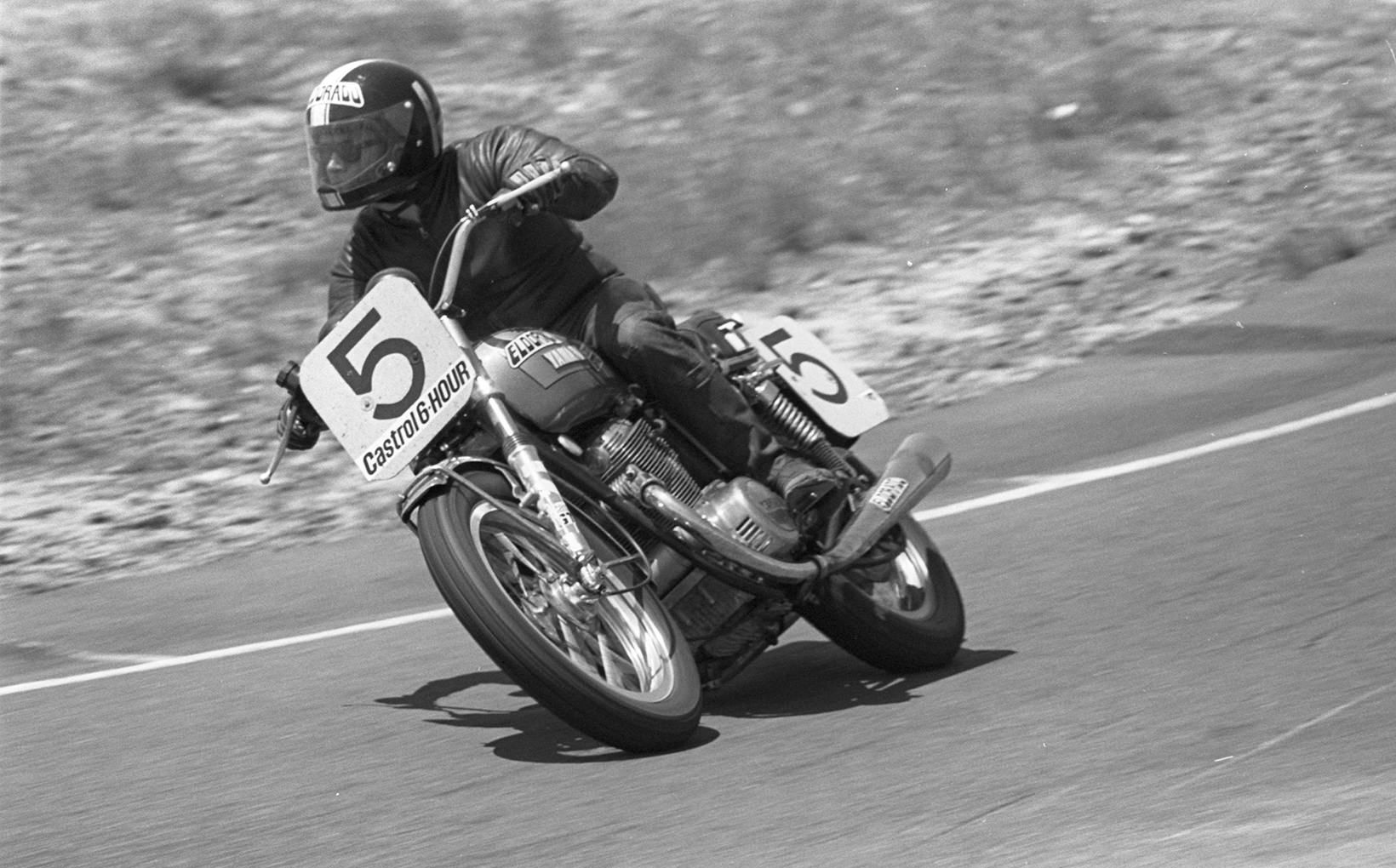 Allan Osborne on the first TX750 home in the 1972 Castrol Six Hour Race.

The race was only ten minutes old when Madden’s machine broke a rear chain, fortunately near the pit entrance, and after repairs it re-entered the fray. Almost simultaneously, Hindle’s mount began to misfire, the problem eventually traced to a simple loose connector under the petrol tank. Knight took over and promptly crashed, necessitating a lengthy stop for a rebuild.  At the twenty minute mark, Hatton was in the pits with the rear of his TX750 covered in oil which had exited the red hot engine via a breather. Just after 11 am, Toombs was seen pushing his Yamaha towards the pits – a big end bearing had let go as a result of overheating. Half an hour later, Hindle’s machine dropped a valve right in front of the pits and expired in a cloud of smoke.  Most embarrassing.

Just after half distance the Richardson/Allen TX was into the pits with a dud alternator. At the finish, just three of the original six TX750s were still running, with the Osborne brothers the best placed in fifth, nine laps behind the winning Kawasaki H2’s total of 334 laps. For Yamaha, it had been anything but the glorious debut for the TX750 that had been planned.

It was obvious that the engine had major design faults, and the problem was not only evident in Australia. US models were showing the same fragility, with crankshaft failures becoming commonplace. Ironically, the main problem was traced to the very feature that made the engine unique – the Omni-Phase balancer. At high revs the balance weights were found to whip the oil in the sump into a froth, aerating the oil and starving the crank of lubrication. 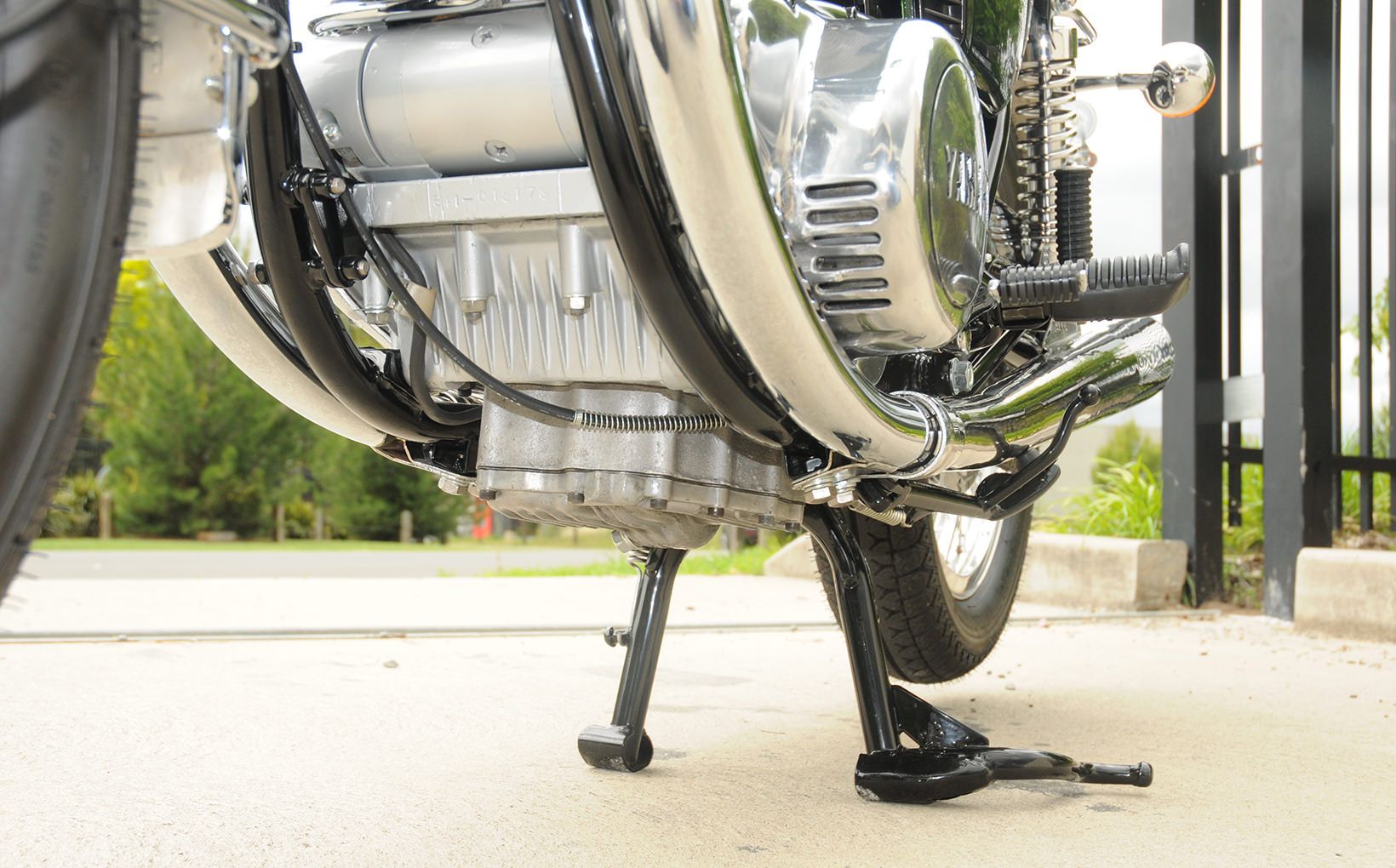 Part of the cure for the lubrication woes is this extended sump.

Compounding problems, the balance chain tended to stretch, knocking the counterweights out of phase and making the engine rougher than a conventional twin. Yamaha quickly got to work on cures for these problems, including a deeper sump, a large oil cooler (which required external oil lines to be fitted) and an adjustable balance chain. But while this may have fixed the mechanical woes, it did nothing to assist the marketing of the $1549 (Australian) machine, which by now was something of an embarrassing failure in the eyes of potential customers.

In NSW, local distributors McCulloch had 130 TX750s in stock in original specification and were unlikely to sell any of them. Yamaha sent a team of mechanics and 130 replacement engines to Sydney, and for several weeks they laboured around the clock until all the faulty engines had been changed for new-spec motors. To avoid paying extra duty and sales tax, the old mills, including the carburettors were smashed up with sledge hammers under supervision of customs officials, and dumped for scrap.

For the 1974 sales year, the second version, the TX750A was released, and to be fair, it addressed virtually all the problems associated with the original model. A large capacity sump held considerably more liquid, and the engine balancing problems were a thing of the past. Unfortunately, the changes came too late to save the model, with disappeared after a little over two years in production. By 1974 the four-cylinder DOHC Kawasaki Z1 was all the rage and selling in huge numbers, so Yamaha’s big twin was seen as old hat. Even with Kawasaki, Honda, and soon, Suzuki all marketing big fours, Yamaha for some reason refused to join the club and instead came out with the three-cylinder shaft-drive XS750, but that’s another story. Today, the TX750, possibly because of its rarity, is quite sought-after and has a number of enthusiastic dedicated clubs around the world, including Australia. 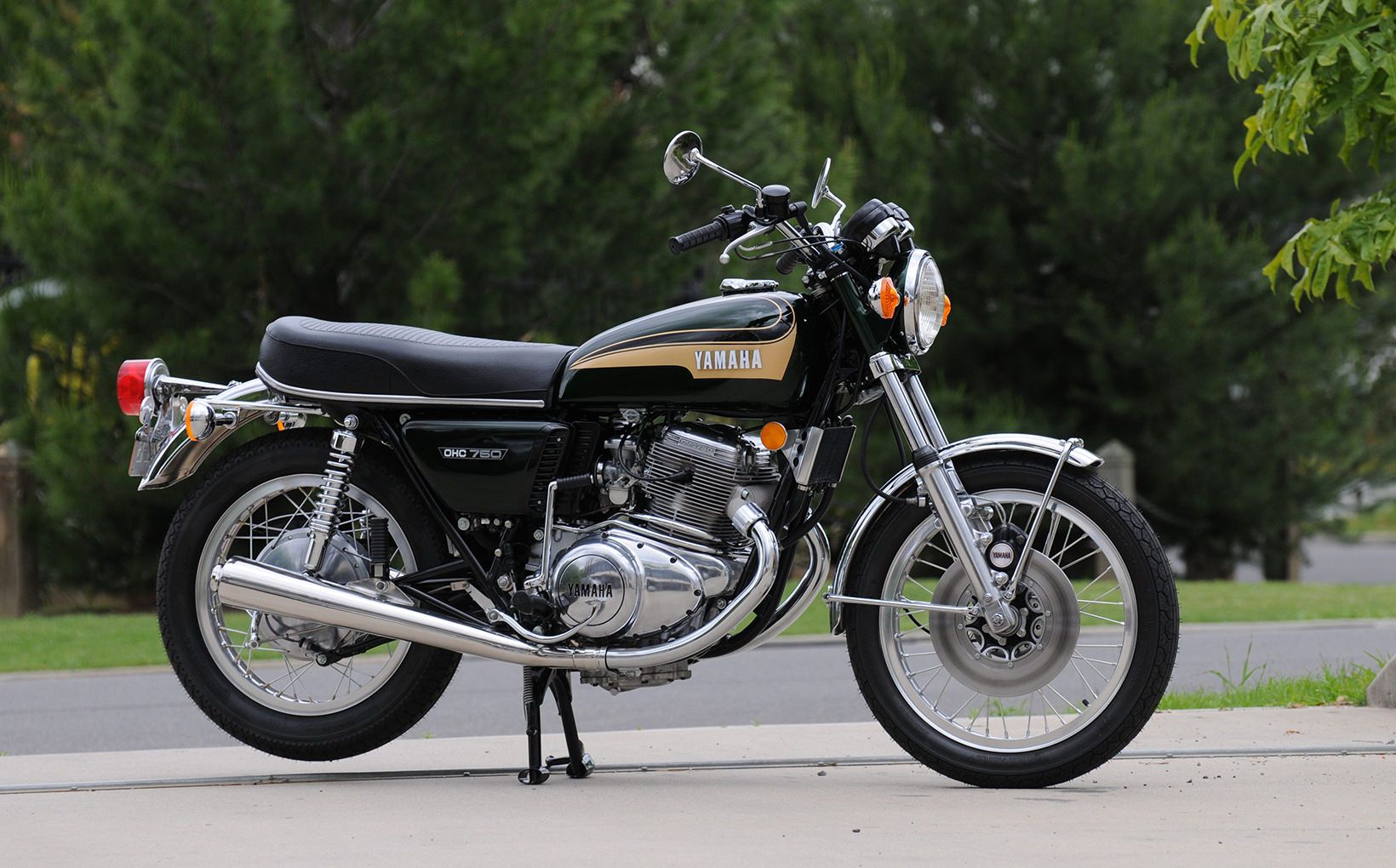 John Fretton has been in the motorcycle trade most of his life and has seen the good, the bad, and the ugly. Like most of us, his memories of the TX750 involved the horror stories of blown engines and warehouses full of unsold bikes. While on a holiday to Christchurch in 1996, he wandered into a shop called Fazazz, a motor enthusiast’s heaven that sells cars, bikes, models, books, videos and all sorts of knick knacks. Standing in a corner was a very tired looking TX750. “It had been hand-painted red and white,” John recalls, “but it interested me because it was a bike that had been totally forgotten from the early ‘70s era. My wife said to me that if I wanted it, then buy it, so I did.” The Yamaha was shipped back to Sydney and sat in John’s workshop for more than ten years. “Then one rainy day I had nothing to do so I dragged it out and just started restoring it. Fortunately, being in the trade for so long I had plenty of contacts for parts from Yamaha and from Pitmans in South Australia, and what they couldn’t supply I found on the net. Although these engines are generally regarded as failures, I think with modern lubricants and materials there’s not much wrong with them and I certainly had no difficulty in rebuilding this one, and it runs beautifully. It is actually one of the first (1972) models that has been updated with the ‘kit’ of the oil cooler, bigger sump and the adjustable balance shaft, which were all standard on the later (TX750A) models.” 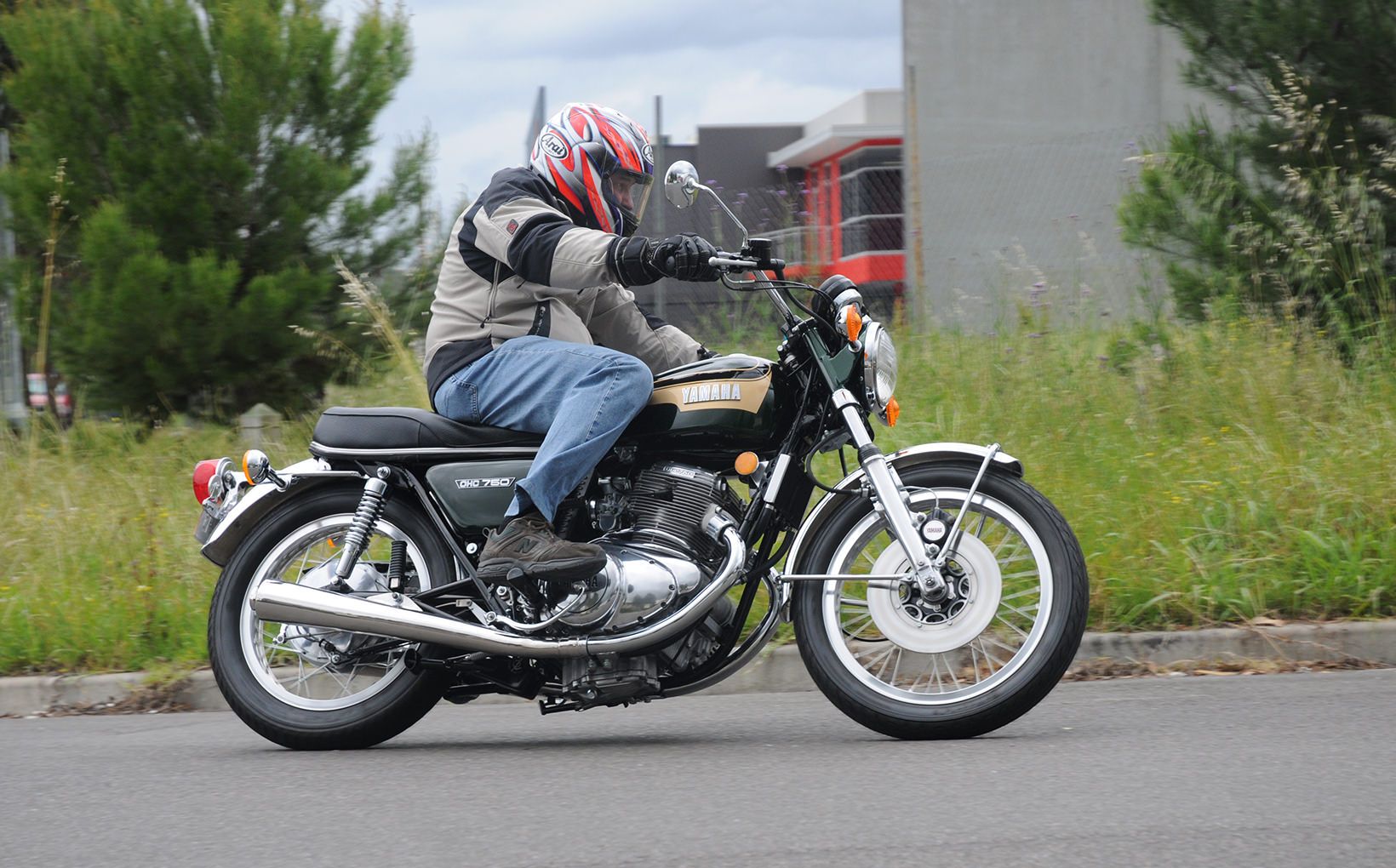 Owner John Fretten takes the TX750 for a gallop.

John’s restored machine is simply stunning to behold, the attention to detail just perfect, down to the correct (for the era) pattern Continental tyres. And I even had a chance to have a short ride around the back streets of Narellan, a stone’s throw from the now-gone Oran Park circuit. This was no extensive road test mind you, but it was sufficient time in the saddle to understand just what might have been, had not the engineers got those few things wrong. This is a vice-free motorcycle, and I agree with the road testers of the day who universally said that it was as smooth a ‘four’. Smoother, I reckon. The engine has stacks of torque, so there’s no point in revving it hard, and everything else works too – even the brakes.

So if you’re looking for something a little out of the ordinary to restore, you could do worse than hunt down a TX750. The parts are available, and the engineering is quite simple and well within the capabilities of the average shed mechanic. And if it turns out like John’s glorious green example, you’ll have a fabulous rally bike that will turn heads wherever it goes.