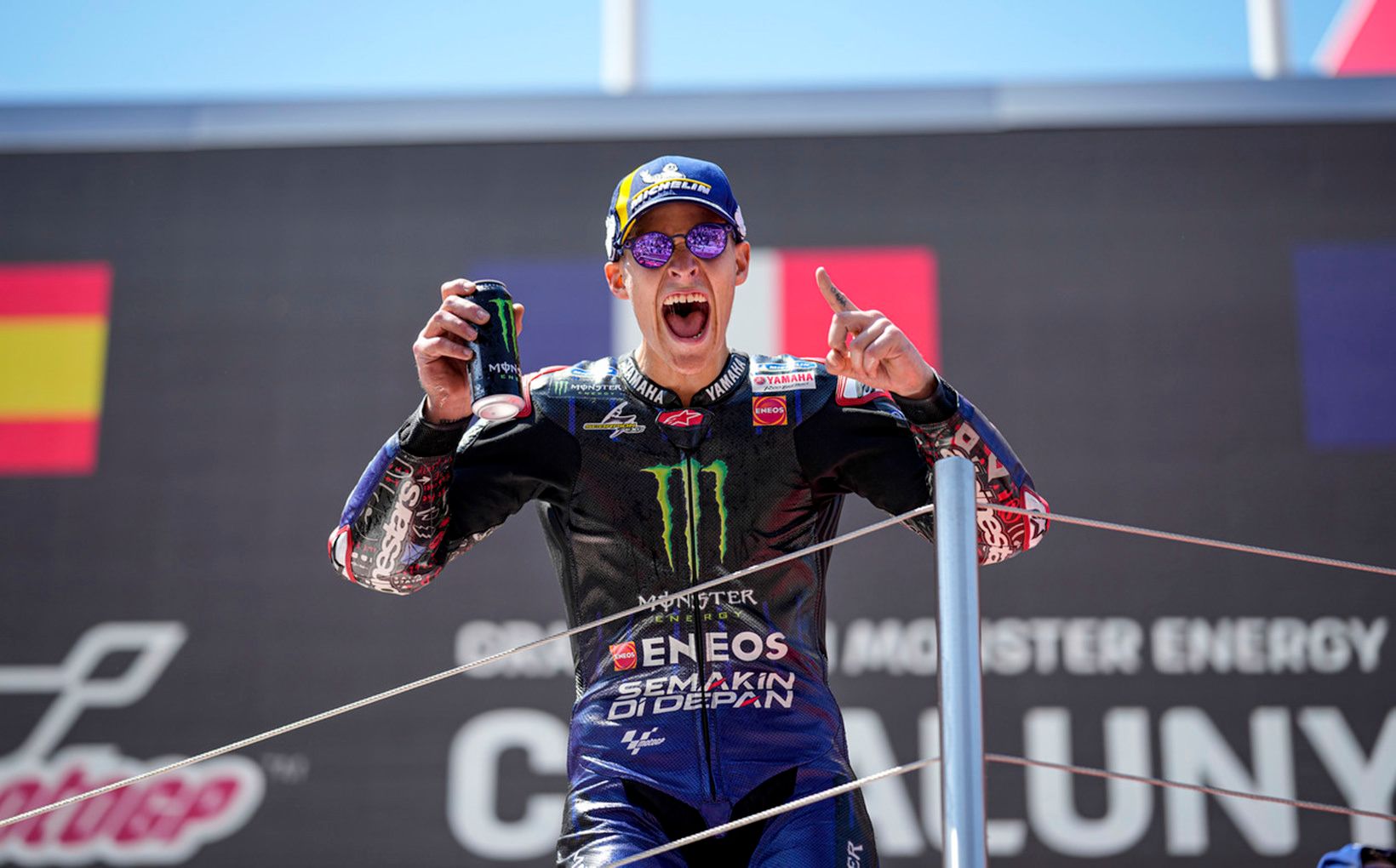 The fabulous Catalan Grand Prix did not disappoint and was action packed from the moment the bikes initiated the launch control and took off. The first lap incident between Takaaki Nakagami, Alex Rins and Pecco Bagnaia was hard hitting, fast and concerning as Nakagami’s lost control of his bike, hit his head and shoulder against the back of the Ducati all whilst sending Bagnaia off his bike and Rins skyrocketing into the universe hitting the circuit with an immense force that sent shockwaves through our bodies. It was a nasty first lap incident and another reminder on how quickly a race start can shift within seconds. We wish Rins all the best with his recovery after being diagnosed with a fractured wrist whilst Nakagami rests up after escaping any serious injuries considering the velocity of his head hitting the rear of the Ducati. He is very lucky! 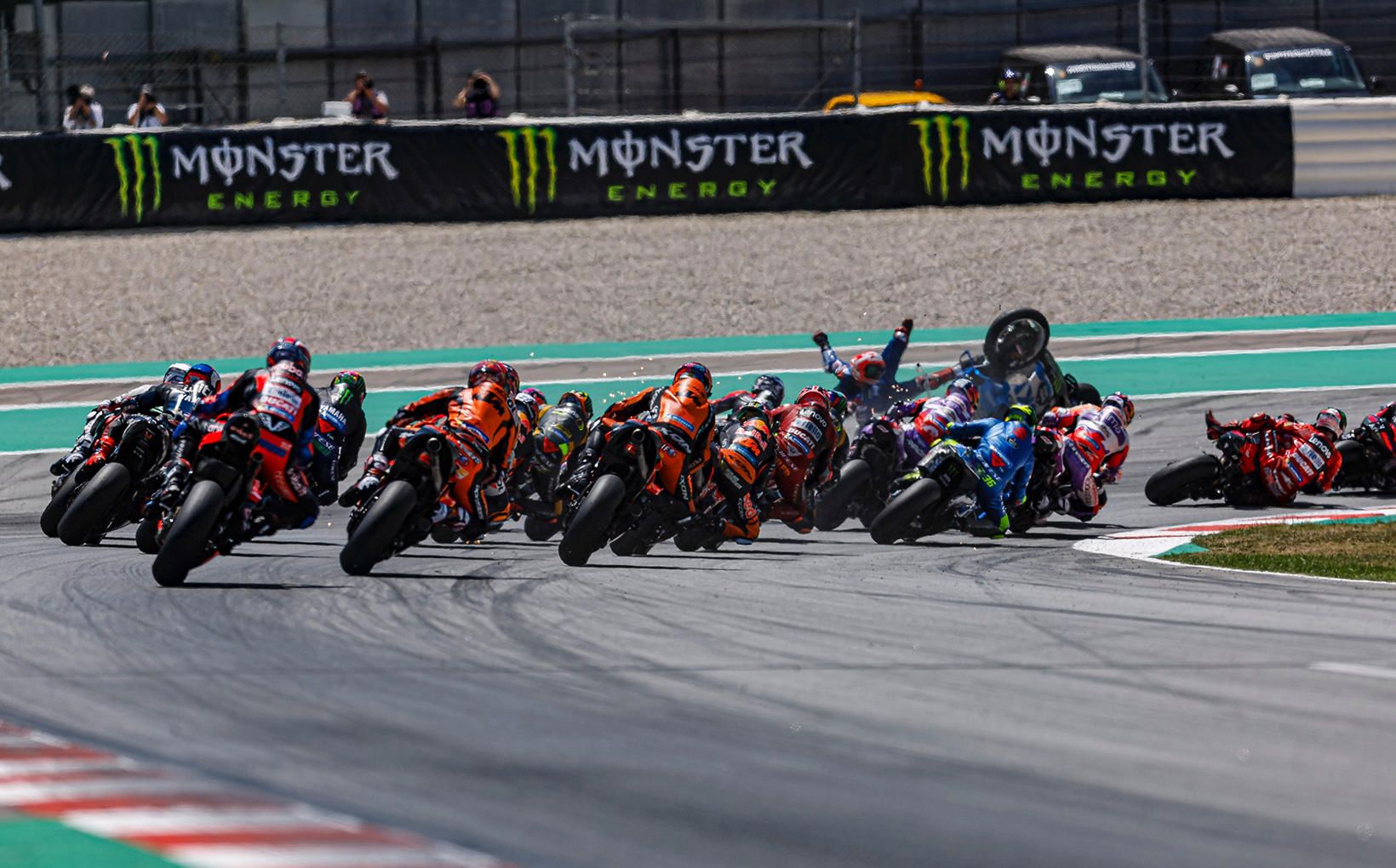 The race winner Quartararo was dynamic and never dropped focus throughout the entire Grand Prix. The Yamaha rider knew before the race that his chances of winning would be higher if he managed to secure his spot at the front of the race and have clear air to push his bike to the limit whilst others tried to catch up in burning hot conditions. The victory is vital for the World Championship considering his three main rivals had varying race results. We know how Bagnaia finished up, Enea Bastianini managed to crash out once again and A Espargaro had second place in the bag before he celebrated prematurely miscalculating the lap count and waving to the crowd before the race had finished. We all thought he had mechanical failure after he held the tank, however, within a corner, A Espargaro knew his mistake was major with his team watching on his disbelief. This moment was baffling considering the level and skill of A Espargaro plus their dashboards having a lap count. The loss of points by finishing in fifth could be the title decider! Regardless of the tears shed, support and comfort from those within the sport, it will take a long time for the Aprilia rider to discard of this memory from his bank. 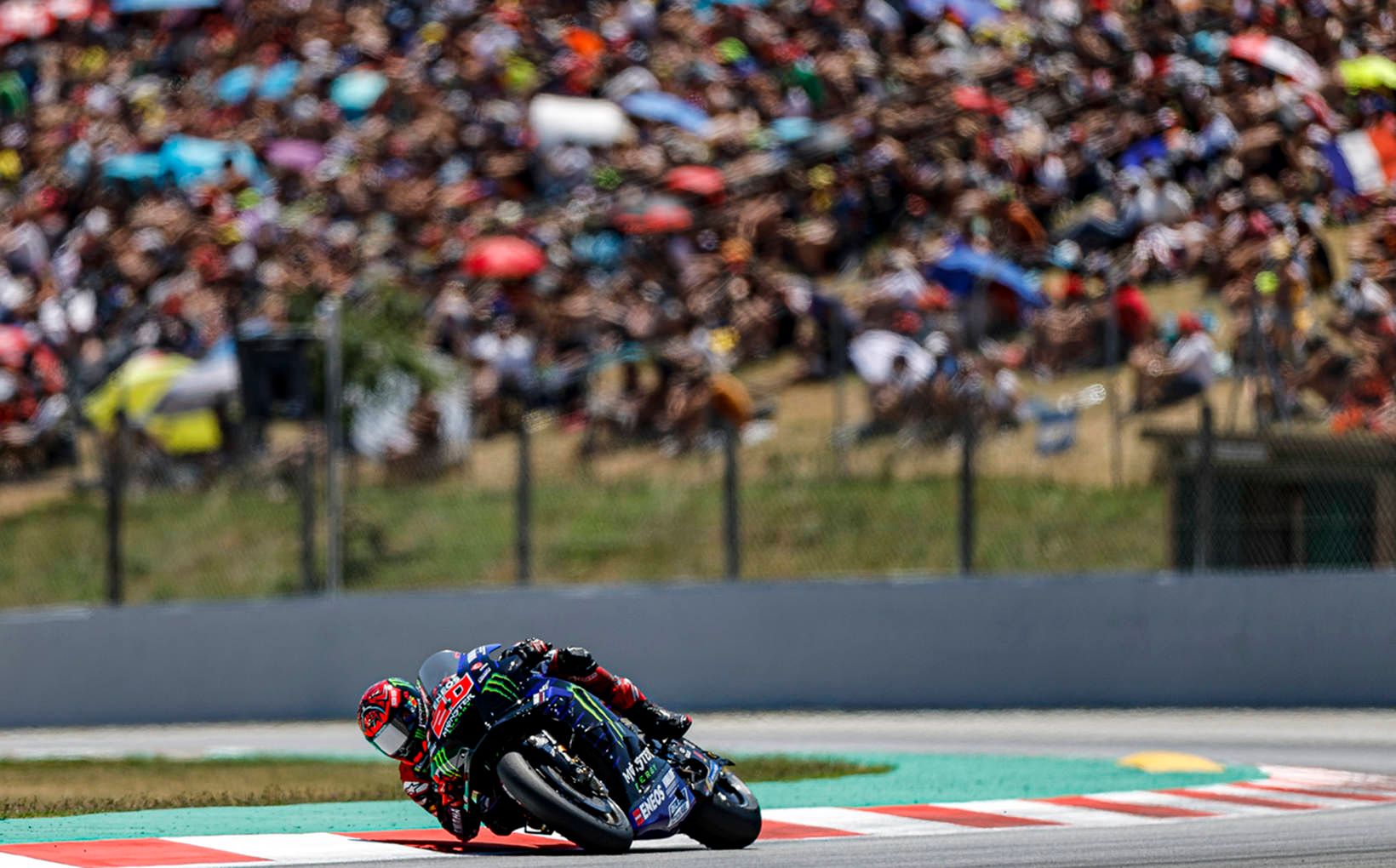 “Being on the attack right from the start had to be the plan for today. Our pace was great, and I knew I had to manage my rear tyre, but I also knew that, if I got into first place, the race was going to be great. I braked super late in the first braking zone, and I thought that I was going to go super wide, but I managed to defend my position well. It was a really long race. I was leading from the first corner to the end, so this was a very constructive victory. Of course, I did feel a drop. I was pushing so hard in the opening laps, but I felt like I had more to give during this race. I had a bit of a margin left. I'm so happy to have this victory in the bag! I'm really satisfied. I'm feeling at my 100%, and I'm riding the bike like I was riding my scooter at home - it's mine! I love it, and I’m enjoying it so much. I'm always improving on the bike and the really good thing is that I can think while riding and that is something really difficult when riding at that speed.” 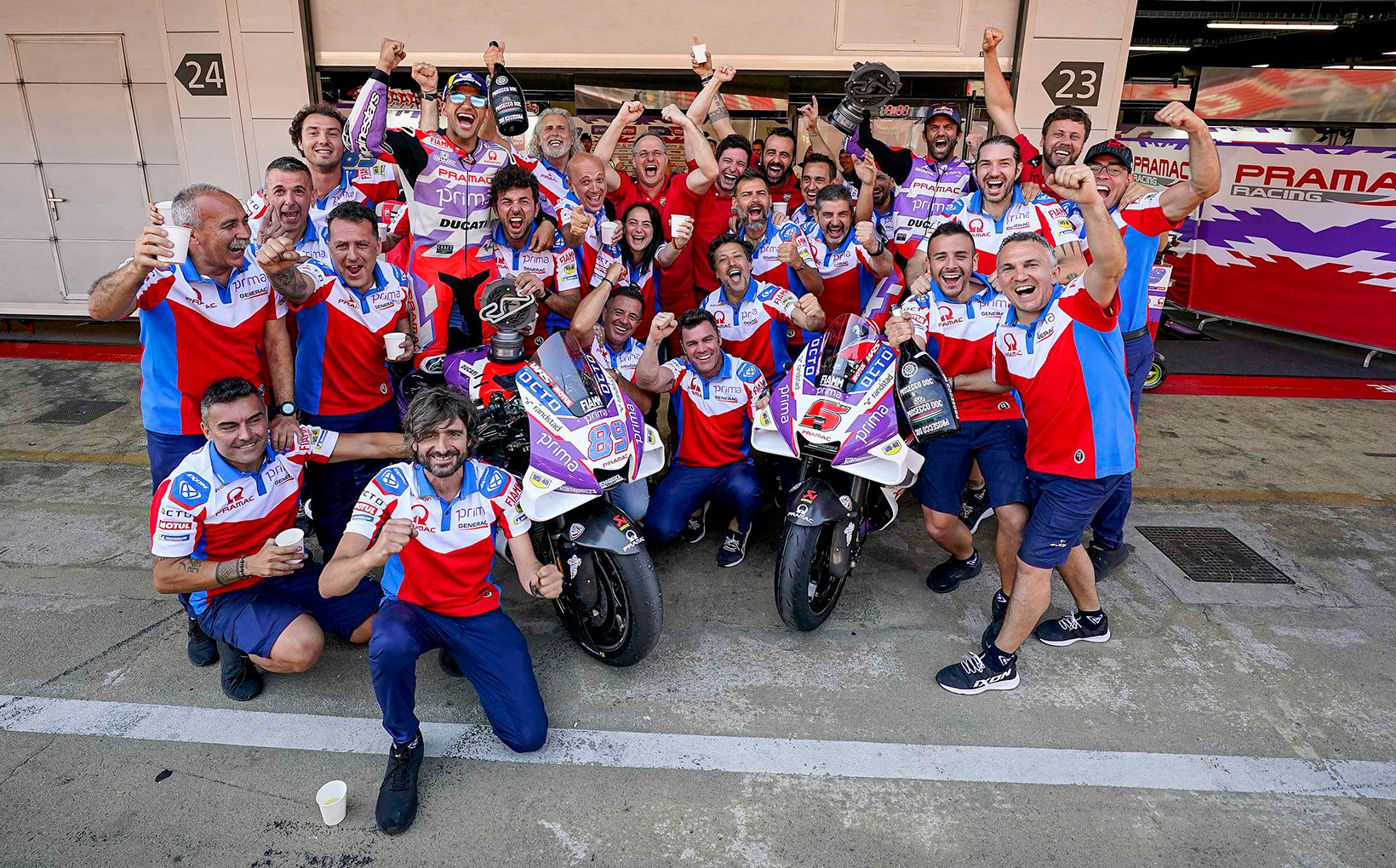 The two riders who profited from the error of A Espargaro were Jorge Martin and Johann Zarco. Both Prima Pramac MotoGP riders finished in second and third place, a nice result for the Martinator who has since undergone surgery on his wrist to help the nerve damage that was done in a crash over a year ago. The Prima Pramac rider’s hand would go numb and his loss of feeling would make it incredibly difficult to power his machine at the absolute maximum level. This corrective surgery should assist in allowing him to feel at 100% once again and with no limitations. Teammate, Zarco, did the best he could during the race considering his choice of tyre with the hard option. The French rider thought this would be an asset in the hot conditions, although it never actually provided him with the edge to push. He capitalised on the mistake of A Espargaro and took the podium with a smile.

“I did not come back because I had never left ... I am very happy, it was needed for me and for the team. We worked hard and we deserve this podium.”

“I'm happy, we were strong all weekend and I took advantage of Aleix's mistake to go to the podium. We took a step forward this weekend and now we have to continue like this.”

The local Spanish fans feel for A Espargaro after what was an early celebration and costly error that he knows was his own mistake. It was looking at the race tower that he misinterpreted the lap count and with points handed away like a gift, A Espargaro cannot make any more mistakes like this because to beat Quartararo in the World Championship you must do absolutely everything in your power with zero error. Right now, the Yamaha rider is showing up his other team members and leading the charge as a solo act. Whereas A Espargaro and Maverick Vinales have been working together to encourage one another and bring home valuable points as a team unit for Aprilia. The testing that took place on Monday was also crucial to the Italian factory progressing and developing their bikes to ensure they continue moving towards their goals. We know the fire within A Espargaro’s belly will be igniting red hot and he will come ready at the next race to finish in the top three. 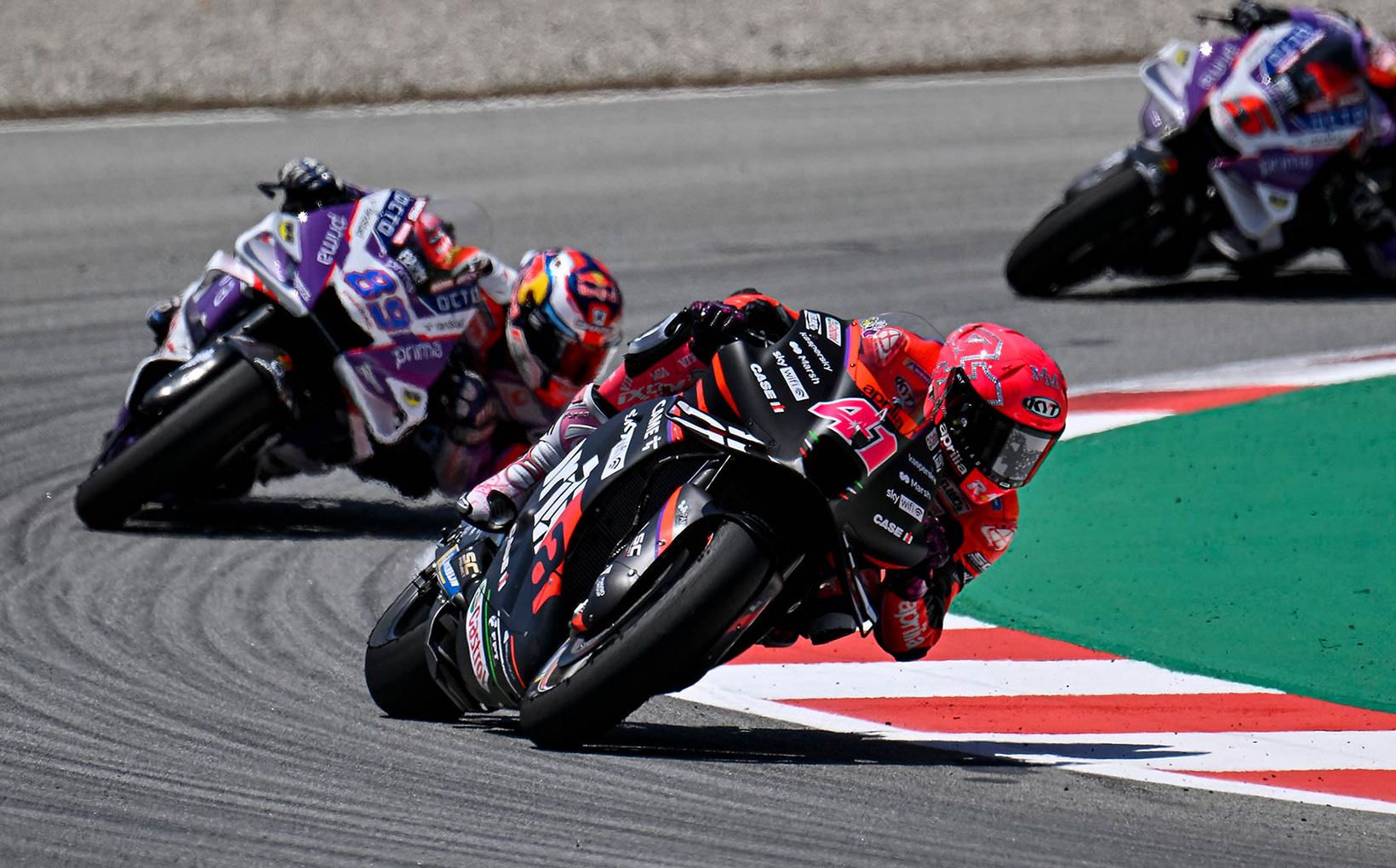 "There isn’t much to say except to apologise to the team. It was my mistake, after a practically perfect weekend here in Barcelona. I misunderstood. Our garage is very close to where you come out of the last turn and, being completely focused, I only looked at how far Martin was behind me on my pit board, whereas the track tower showed 'L0' and that made me think that it was the final lap. At the beginning of the race I might have been able to push harder, but I was concerned about tyre wear and then, of course, making up the gap behind Fabio is never a simple task. But if I want to beat him in the World Championship, I cannot afford to make mistakes like this."

"This weekend we did a good job overall. We clearly still need to improve but I feel like we’re getting there. Starting with the soft rear tyre was a gamble but we analysed the choice during all the sessions and in the end, even if it didn’t pay off the way we expected it to, it was still the best option for us. Tomorrow will be an important day of testing. We’ll keep experimenting and trying to find the right feeling." 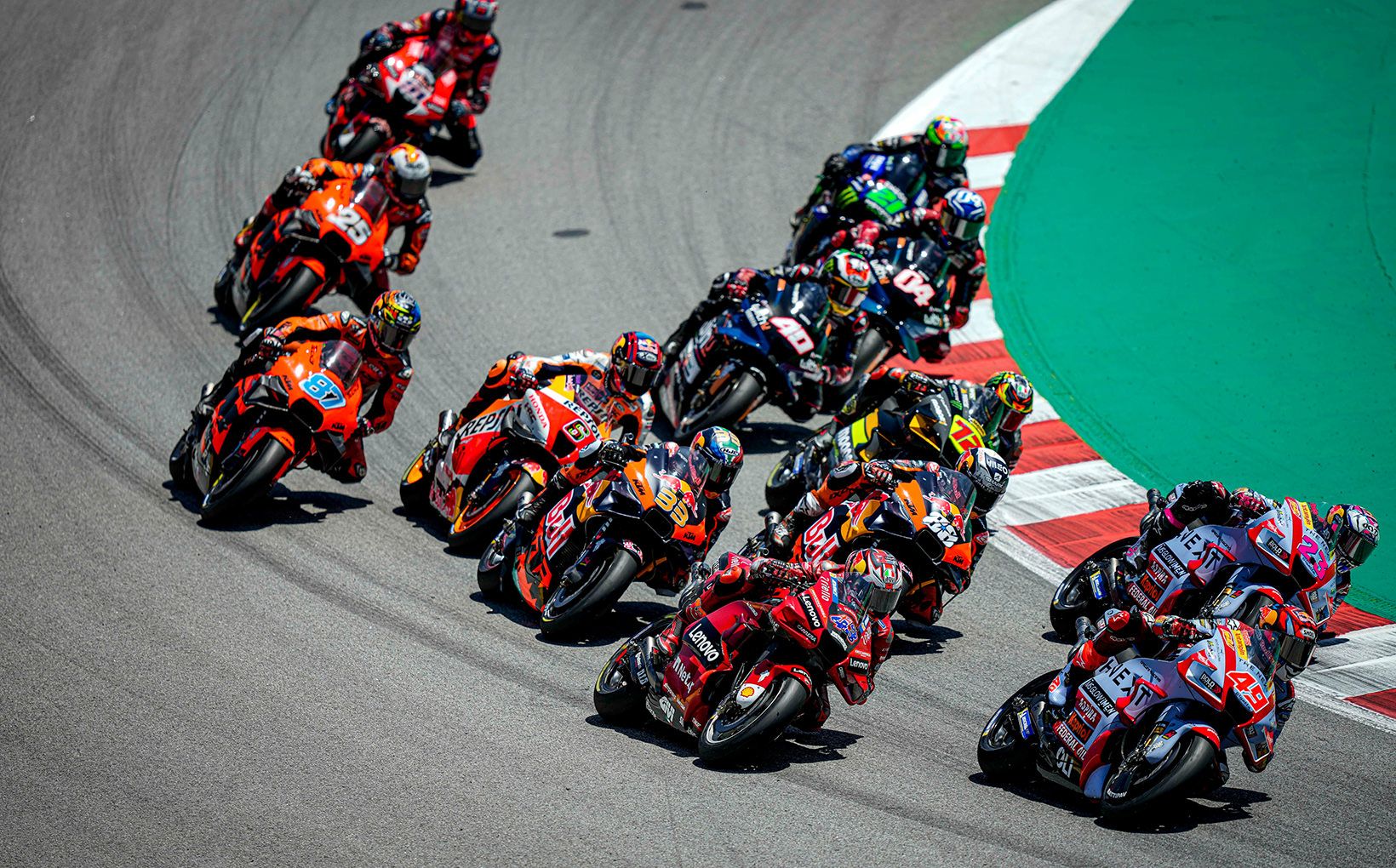 With the results of the weekend, Ducati had mixed feelings. Australian rider Jack Miller had a tough weekend, Bagnaia lost sight of the World Championship in terms of being behind significantly in points due to being a passenger in a crash on lap one, their protégé Enea Bastianini binned it into the kitty litter, teammate Fabio Di Giannantonio crashed, Marco Bezzecchi found himself in the trap of the front end tucking out and sending him into the gravel and it left only a handful of Ducati’s to finish. The Bologna factory did not anticipate such mixed results as their dominance all weekend was heard with the times, speed traps and consistency in the earlier sessions. Whilst their luck was running out, Joan Mir from Team Suzuki Ecstar had a great weekend finishing in fourth place and putting in a quality race result even though he started far down the grid and has been emotionally drained with the news of Suzuki rumoured to leaving the premier class. The harmonious energy in Suzuki normally has been riddled with uncertainty, anger, sadness, disappointment and for some regret as they scramble to find a ride for 2023. 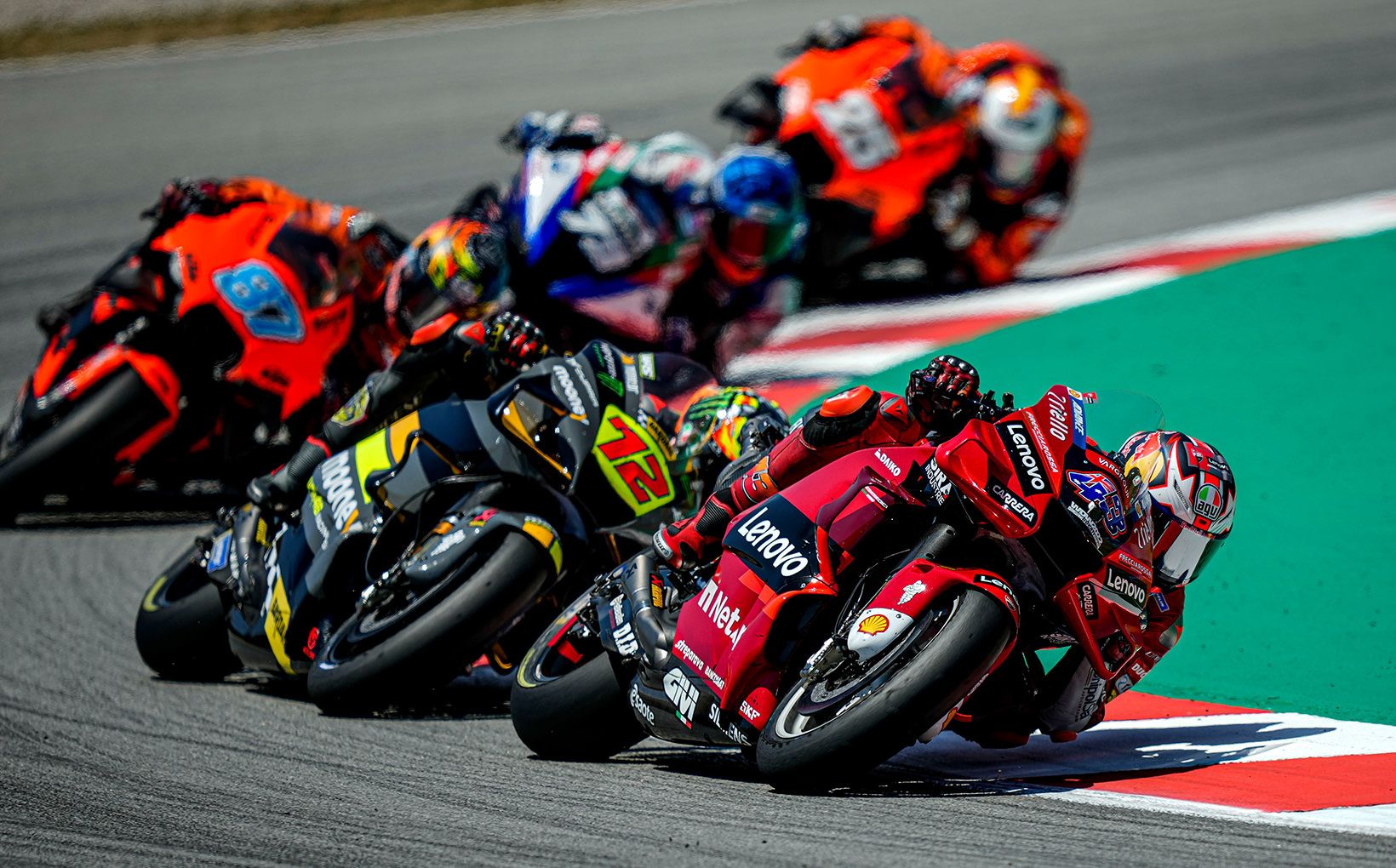 "It was a really strange and disappointing race. I suffered a lot from the lack of grip from start to finish. I decided to race with the hard tyre hoping that I could be strong at the end, but it didn't work out that way. The rivals were able to pass me both on the inside, and the outside and the rear tyre was so worn that I couldn't keep my lines. It's a pity." 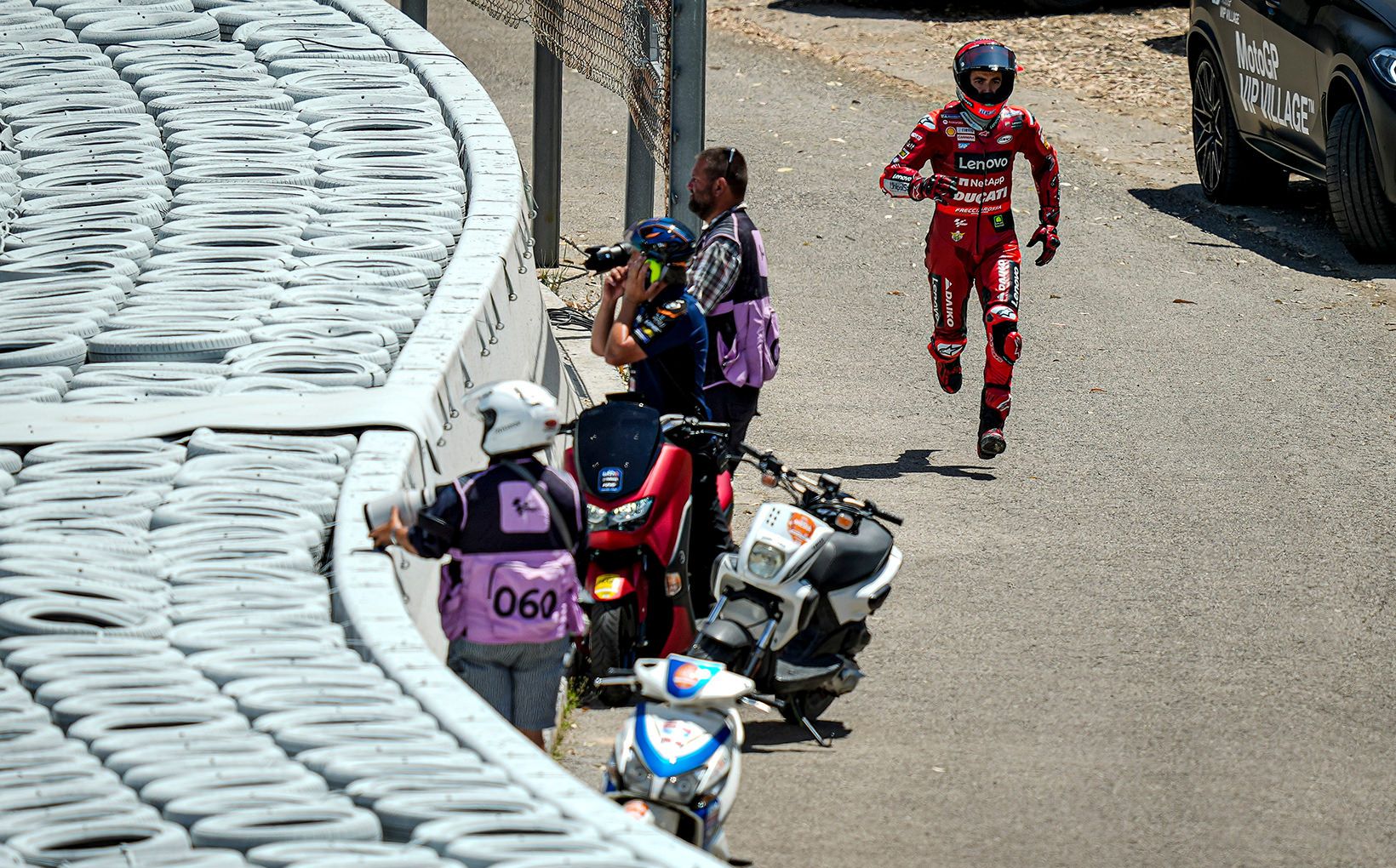 "First of all, I'm happy to hear that Nakagami is OK after the nasty crash. In my opinion, he went a little overboard, considering it was the first corner of the first lap, and he had already made up several positions. These are races, and I don't have much to add. Now, we have to work heads down and stay focused for the next races. We can do well in the upcoming Grands Prix and make up some points. It won't be easy given the consistency of Quartararo. Still, even last year, we had a significant disadvantage, and we managed to finish the season 26 points behind him, so everything is still open."

“My first lap and the first part of the race went very well, I felt really good. I had a yellow flag penalty; I passed another rider on the straight when I was tucked down and then I didn’t see the flag at Turn 1. As the race went on I started to struggle a little bit, but I was able to manage the situation. It was very important for me to finish this race well and get prepared for the test tomorrow. It’s nice to take some points after a rough few weeks.”

The testing that took place on Monday was also very important to the overall feel of the bikes for varying manufacturers. Here is a breakdown on what we noticed during the testing for each manufacturer.

This is vital as Yamaha will only have two bikes on the grid in 2023, so any testing data they can obtain with riders on board their machines will be considered “gold nuggets” to ensure their riders for 2023 are set up correctly.

The testing schedule at this point of the season is critical to the success of many teams as they continue throughout the World Championship calendar. We look forward to seeing how these changes are integrated and what benefits they provide for each manufacturer. Be sure to tune into the next race event with the Liqui Moly Motorrad Grand Prix Deutschland from 17th June to 19th June.