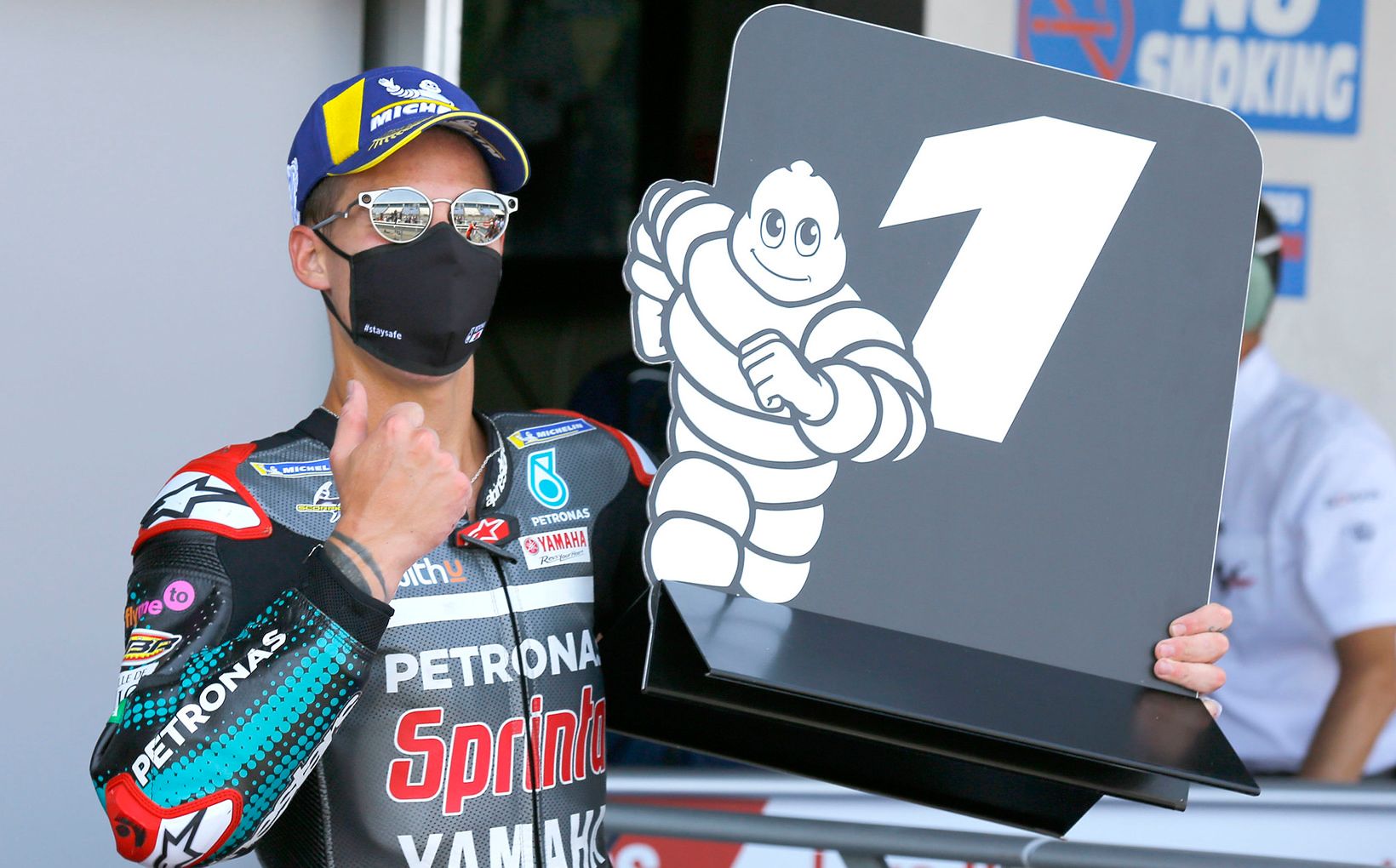 The first race of the season was a rollercoaster ride of enjoyment and happiness for some whilst sadness for others with injury. The Frenchman Fabio Quartararo winning in Jerez was brilliant. He demonstrated maturity, hunger, focus and precision to take a victory that was long overdue. The race was electric from the very beginning with battles, an intense flair with Marc Marquez pushing the limits, Maverick Vinales wanting to be top gun, Jack Miller pushing his Ducati to the limits and outlining the reasons why he is a title contender on board the Pramac machine that is beautiful to look at plus Andrea Dovizioso who rode after having surgery on his collarbone not so long ago! 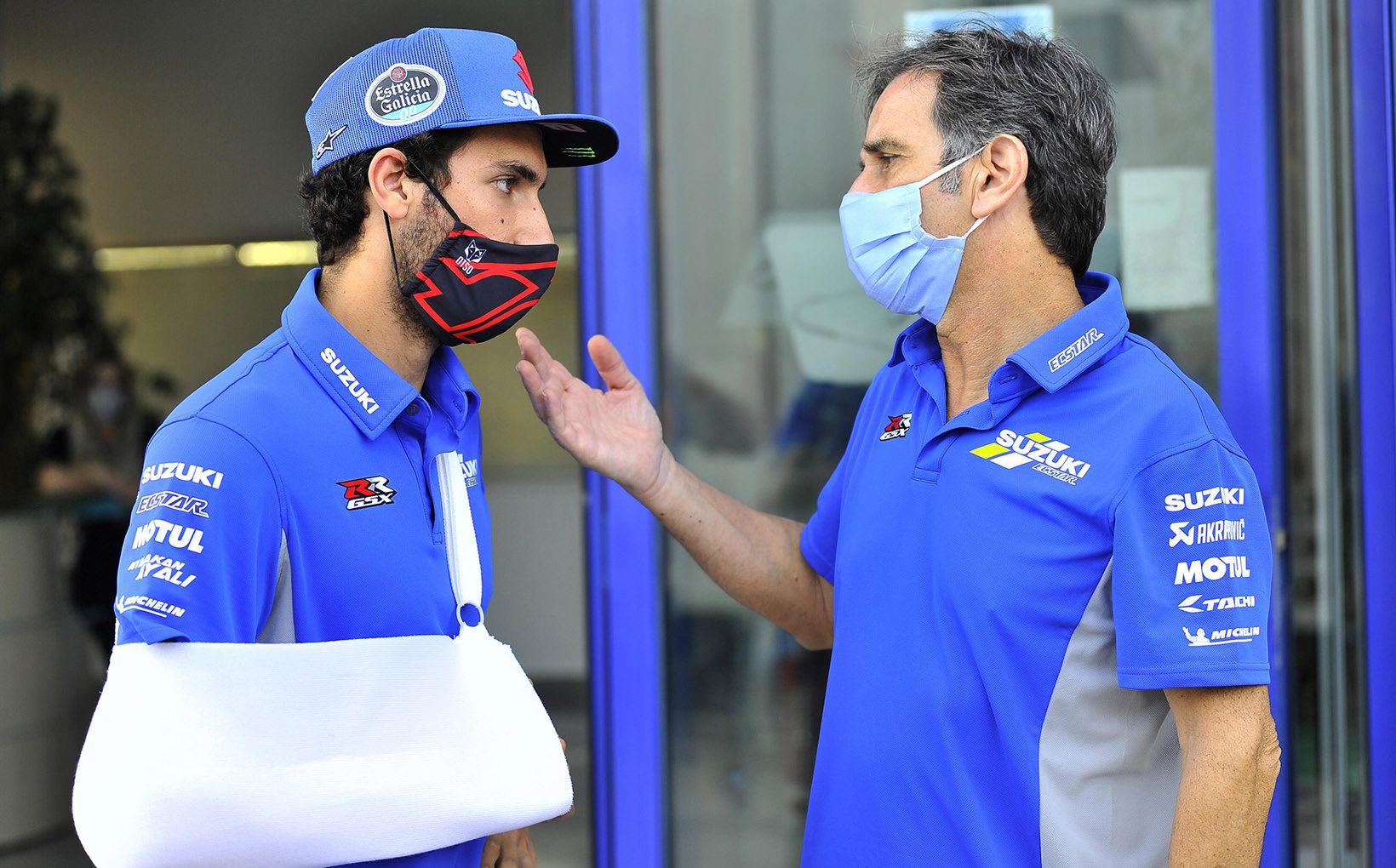 After months of no two wheel sport, we can say that this race is one to watch back and we cannot wait for more although the bad news is the loss of a few key riders to injury. The list includes Alex Rins who sustained a fracture and dislocation in his right shoulder along with some muscle damage which is not an ideal situation to be in. Further assessments will be made on what Rins is up for in order to recover. It is a real shame because the Suzuki bike was looking like a title contender and Rins on form. In contrast, Cal Crutchlow was also fast on board his Honda and during warm up on race day, he suffered a nasty crash that sent shockwaves down our spine because the look of the accident was intense. Unfortunately, Crutchlow suffered a concussion, neck pain and it was discovered that he fractured his wrist. Surgery is required and the same feelings/fate are felt by Marquez after a ginormous crash in the Jerez race.

Alex Rins: “It’s impossible to race today here in Jerez. It’s really disappointing that I suffered this injury because my feeling with the bike had been really good during the whole weekend. But right now, I need to think about getting well as soon as possible, the doctors will help me with rehab during next week and they have given me some stronger painkillers. I’ll try my maximum to ride next week.” 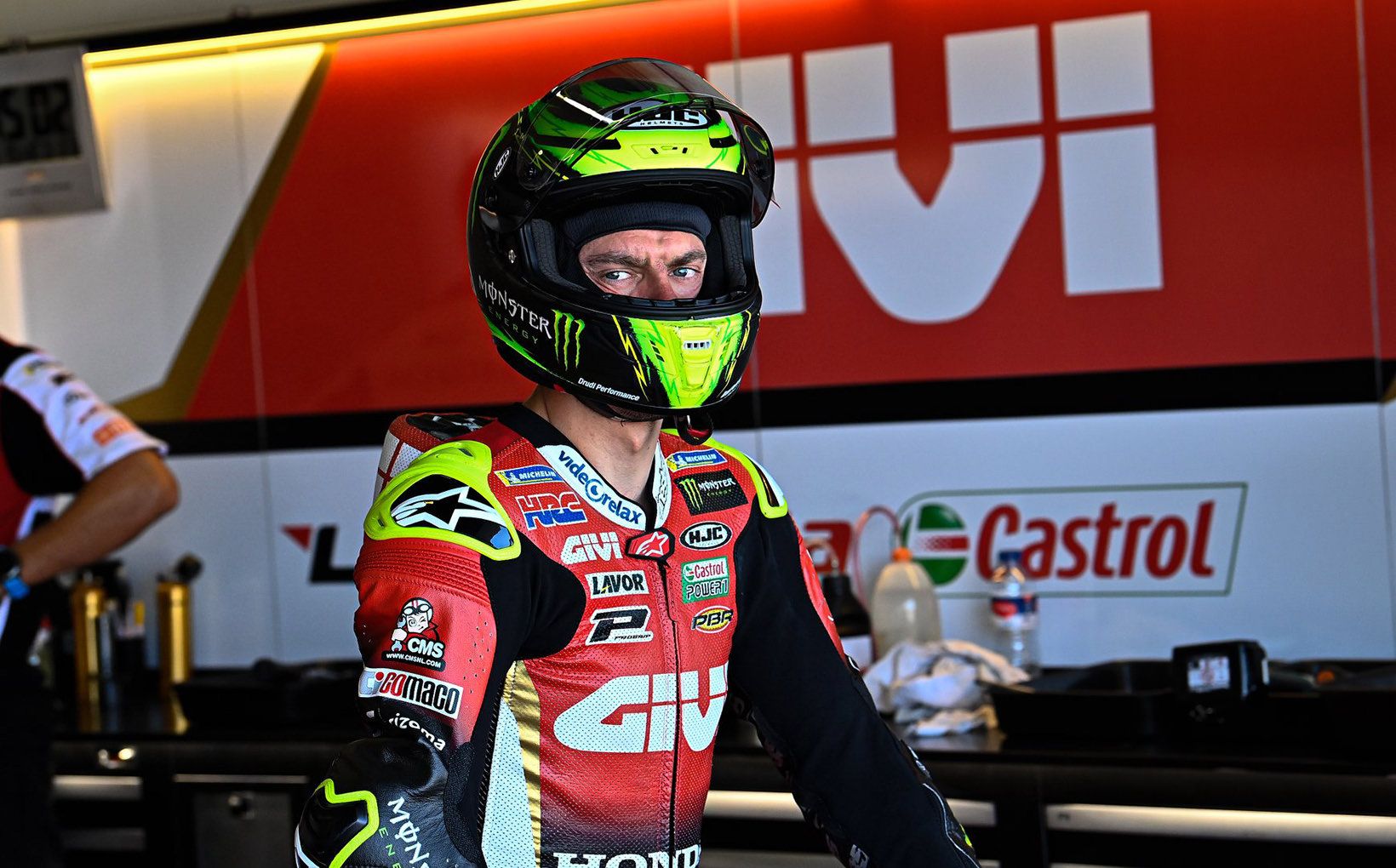 Cal Crutchlow: “Unfortunately in the last lap of the warm-up I crashed going into turn eight. It seemed that when I braked on the kerb, the front of the bike slid and I was unable to save the crash. What was going to be a normal crash escalated when I went into the deep gravel trap and started tumbling, hitting my head quite a few times, particularly my face. I was a bit dazed after the crash, and a bit sore in my whole body, especially my hands. “After further assessment at the medical centre I was sent for the CT scan on my head and neck and it all came back fine. With the facial bruising I had, however, Dr. Angel Charté felt I needed eight hours rest, which I think was the right decision. “When I returned to the circuit I began to feel some pain in my left wrist, so went for another scan of the scaphoid, which it seems has been broken in the crash. Dr. Mir will operate on the wrist in Barcelona on Tuesday morning, and I will return to the circuit on Friday and hopefully to action. I look forward to seeing the LCR Honda CASTROL Team there, and hopefully to work hard with them again next weekend.” 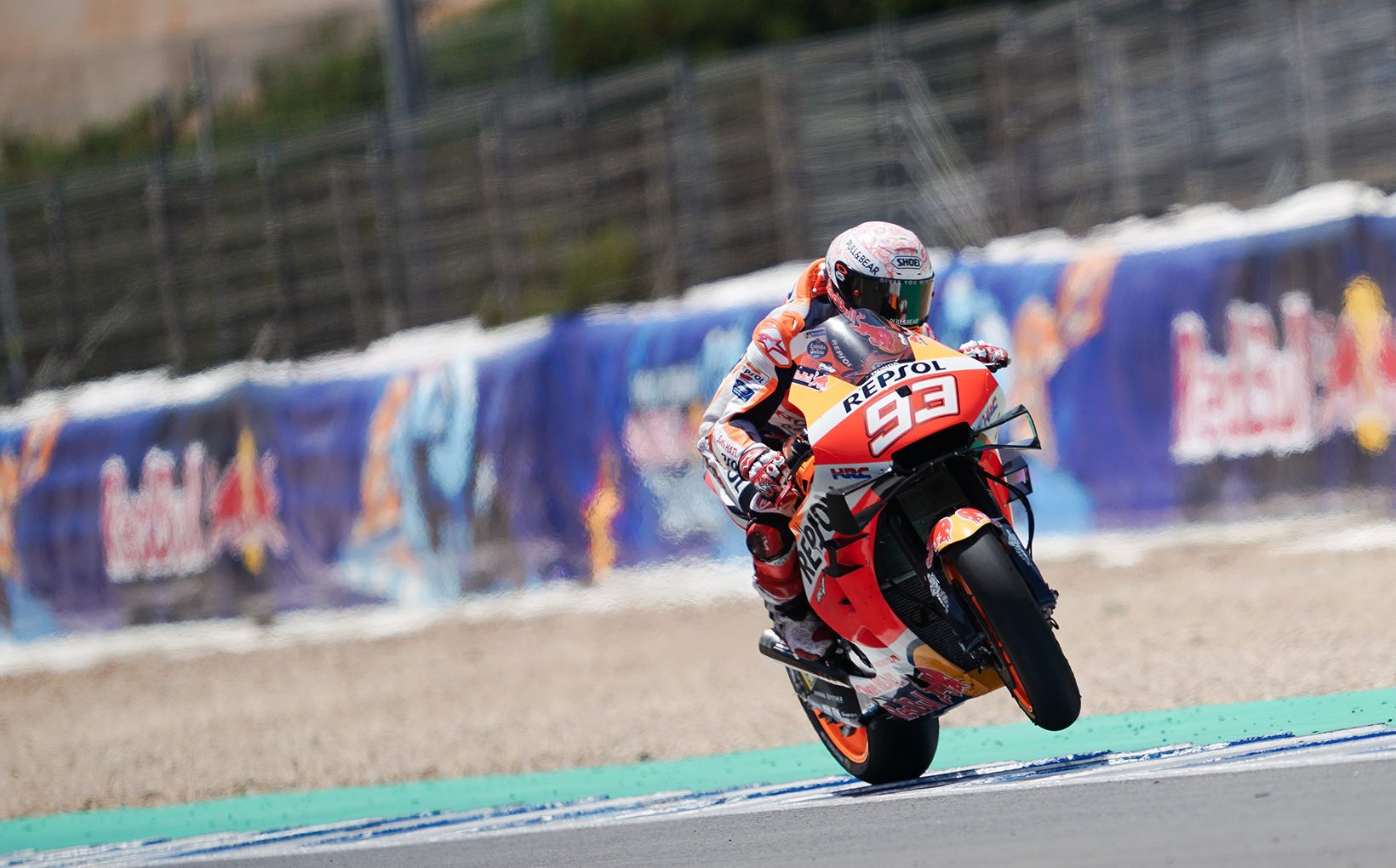 The rider of the day regardless of the outcome has to be Marc Marquez to save a crash, end up last and then ride back with ferocity to third place before a high side that has put his World Championship title in question. The fact Marquez was able to pass other riders when they thought he was out is remarkable and it just demonstrates how he rides that Honda machine with absolute precision. It was like watching the Moto2 days of MM93 in action all over again, it just did not end well. You could see his arm snap in the slow motion replays as a result of the force and his bike landing on top of him. His dedication to winning is remarkable although we know riders are not invincible. 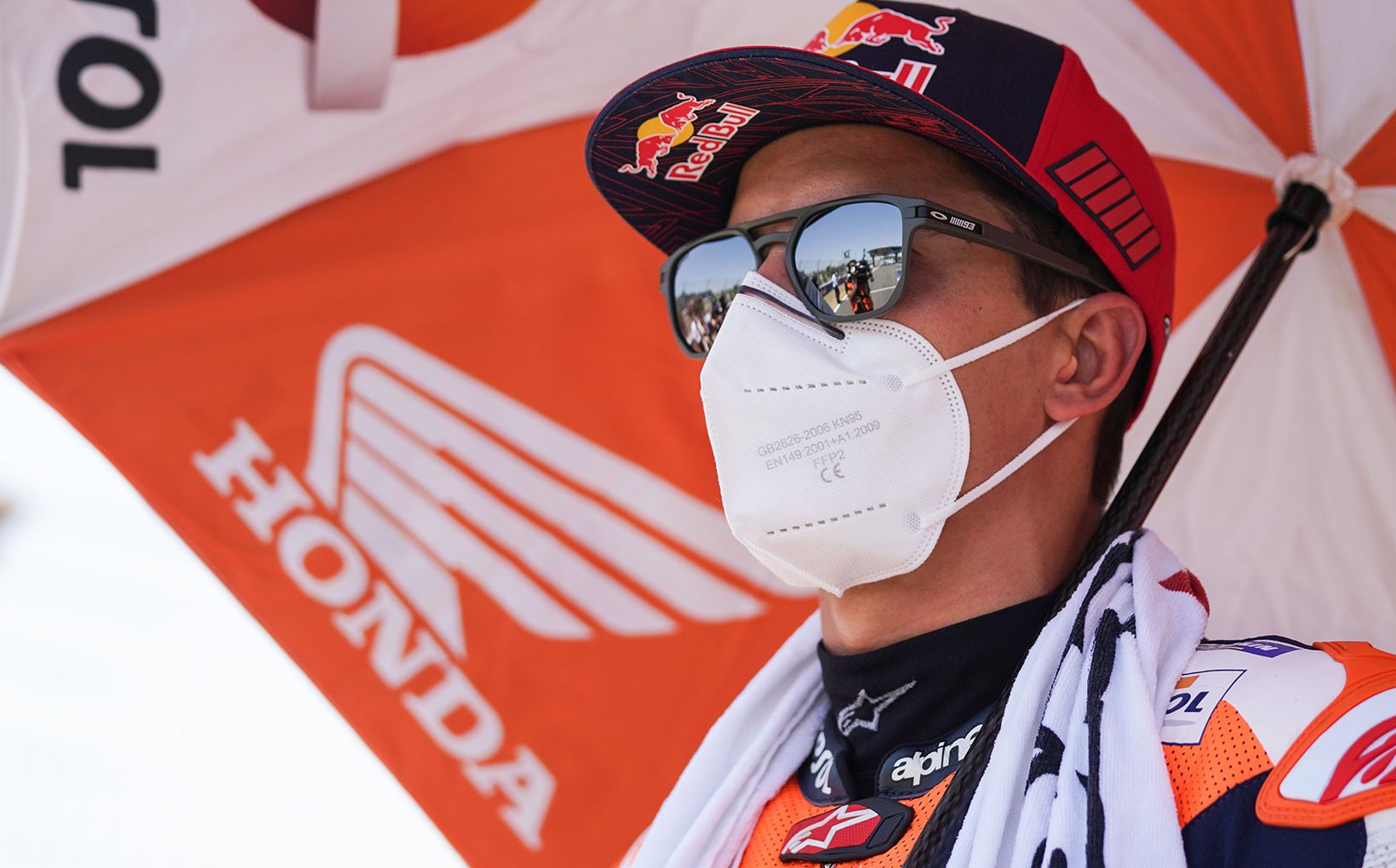 Repsol Honda: “A fall at Turn 3 while fighting for the podium has resulted in a broken right humerus for the reigning World Champion, who will travel to Barcelona for surgery. After mounting an incredible comeback in the Spanish GP, Marc Marquez suffered a high side at Turn 3 and came down heavily on his right arm. As a result, the eight-time World Champion has suffered a transverse diaphyseal fracture to his right humerus. MotoGP medical staff have confirmed there is no other serious head or thoracic trauma but will remain under observation for 12 hours. Marquez will travel to the Hospital Universitari Dexeus in Barcelona on Monday, July 20 and is aiming to be operated on by Dr Xavier Mir and his team on Tuesday, July 21st. Recovery time is as yet unknown, the Repsol Honda Team will provide an update after the operation.”

Regardless, Marquez is the one who can come back stronger and with a desire to prove everyone wrong. In the meantime, the World Championship has been blown wide open and Quartararo is proving to be a contender alongside Vinales, Miller and Dovizioso. Who do you have in your sights for the top spot with the whole COVID-19 situation and a Championship that could change at every opportunity? We feel that the French rider has the ability on board that spec Yamaha to take it all the way. With that said, you need a mature mindset, to remain injury free and not get caught in the traps of other riders who try to psych you out. The games are on and it is a charge to the finish line because the biggest threat is in rest and recovery mode to ensure he can repair his injured body as fast as possible. In the end of the day, riders like Marquez, Crutchlow and Rins are super human in the context of an athlete. 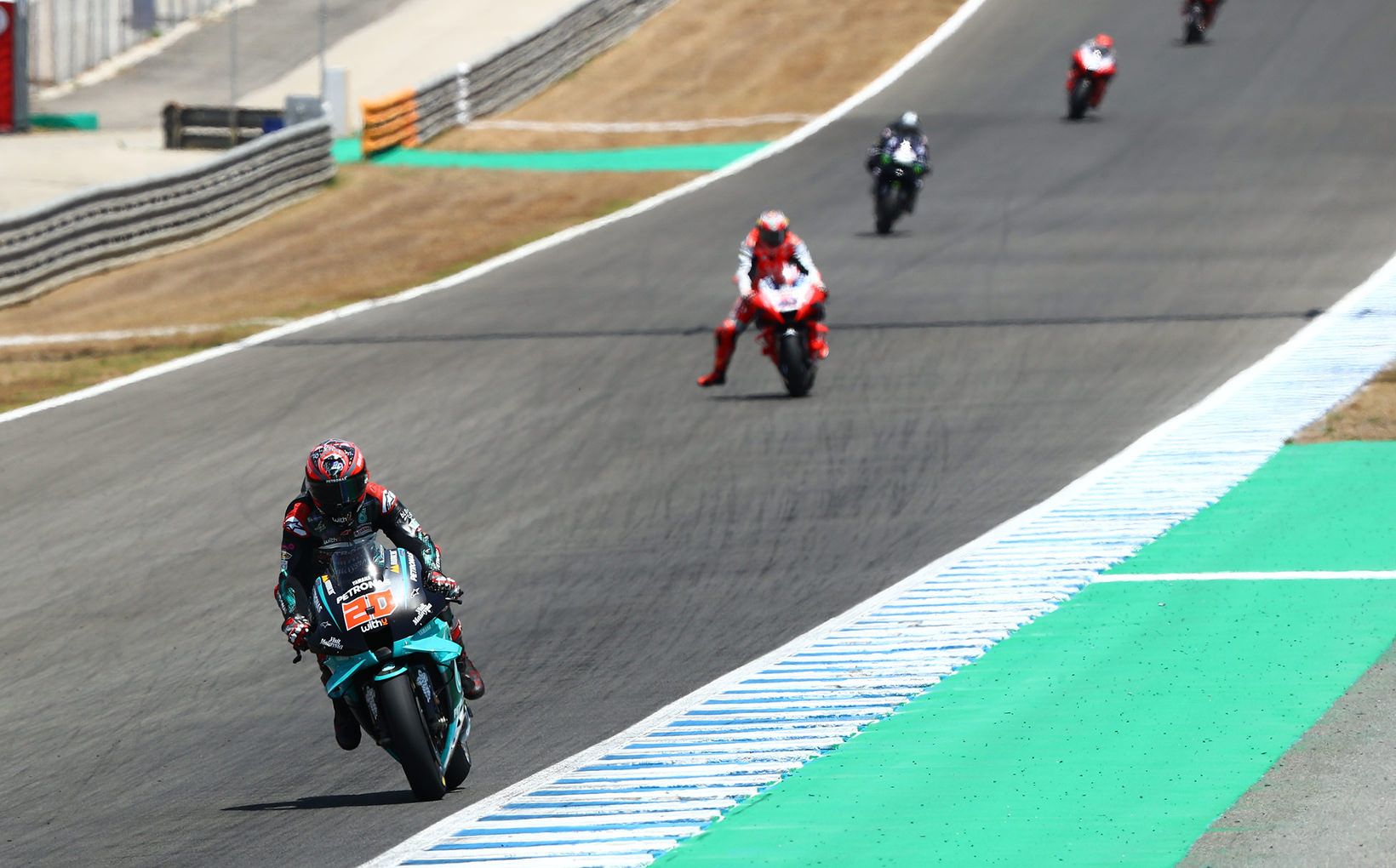 Fabio Quartararo: “It feels incredible. I don’t think the feeling has sunk in yet, I think that will come when I watch the race again. It’s a shame that my family, friends and fans are not here to see it, but it feels so good to finally be on the stop step of the podium. It was an amazing race and we were so consistent even though the track was really bad. There was very little grip and the tyres just dropped off so fast. I felt great on the bike so thank you to my team, partners and to Yamaha for that. I had one of the scariest moments of the race in the same place where I had the problem last year, I was worried it was going to happen again! All was good, but the last ten laps felt like they took so long to complete. Every lap we got closer to the end I was feeling better and better, just having some fun. This win is for my family, my brother especially, my best friend, my manager, all the fans who can’t be here, my team and also to those people that have suffered a lot during the last 4 months. I also want to wish a speedy recovery to Alex [Rins], Cal [Crutchlow] and Marc [Marquez].” 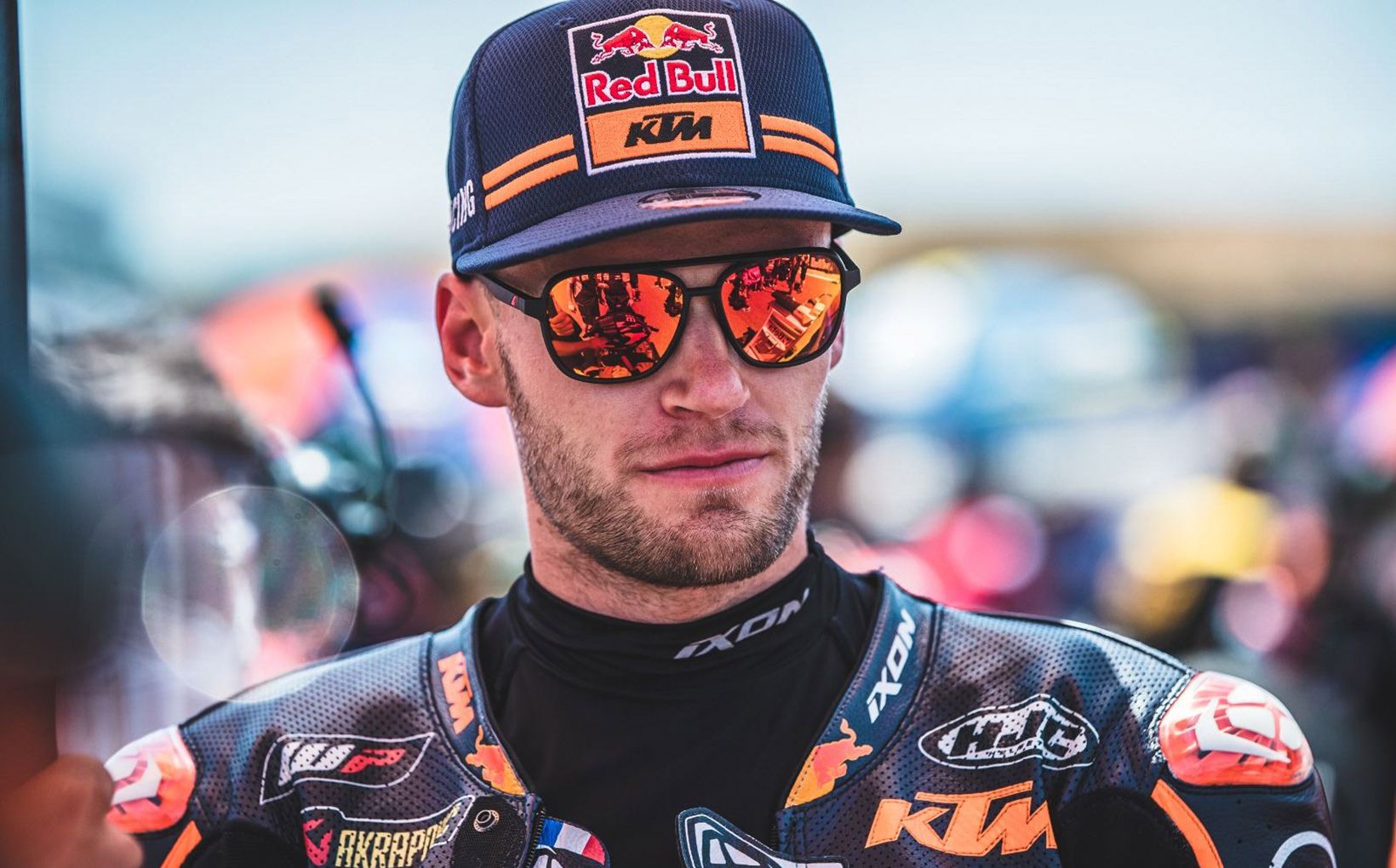 As we move towards another race in Jerez, there will be challenges to overcome. Vinales is still fine tuning the Yamaha, Miller has to reset and change his handlebar set up as his hand went numb during the race and this cost him a podium finish, DesmoDovi is waiting to try and re-negotiate his contract whilst riding to save his career, Brad Binder is performing at a level no one thought was possible this early into the season and Pol Espargaro although stepping up to Repsol Honda is demonstrating how the KTM machines have improved and are coming through the field with strength. No doubt, Binder will need to get used to racing in a pack of riders that are all hunting for the same thing and sometimes this can be a shock. With that said, his maturity on the bike is going to reward him in the long run plus being a KTM stock rider is also beneficial to the overall success planned for him as the races go on.

Brad Binder: “I’m really happy that my training in the off-season worked because this is a whole new ball game. I must be happy. The whole package is working so well so I must say thanks to KTM for all their work and I’m looking forward to seeing what we can do in the next races. Let’s keep our heads up and keep this work ethic going.” We agree and look forward to seeing him progress through the ranks and then becoming the lead KTM rider in 2021, so every result makes the dream become a reality in surviving another year in the premiere class on board a premium bike. KTM has definitely progressed and with the help of Dani Pedrosa to become a contender for podiums and the top five. 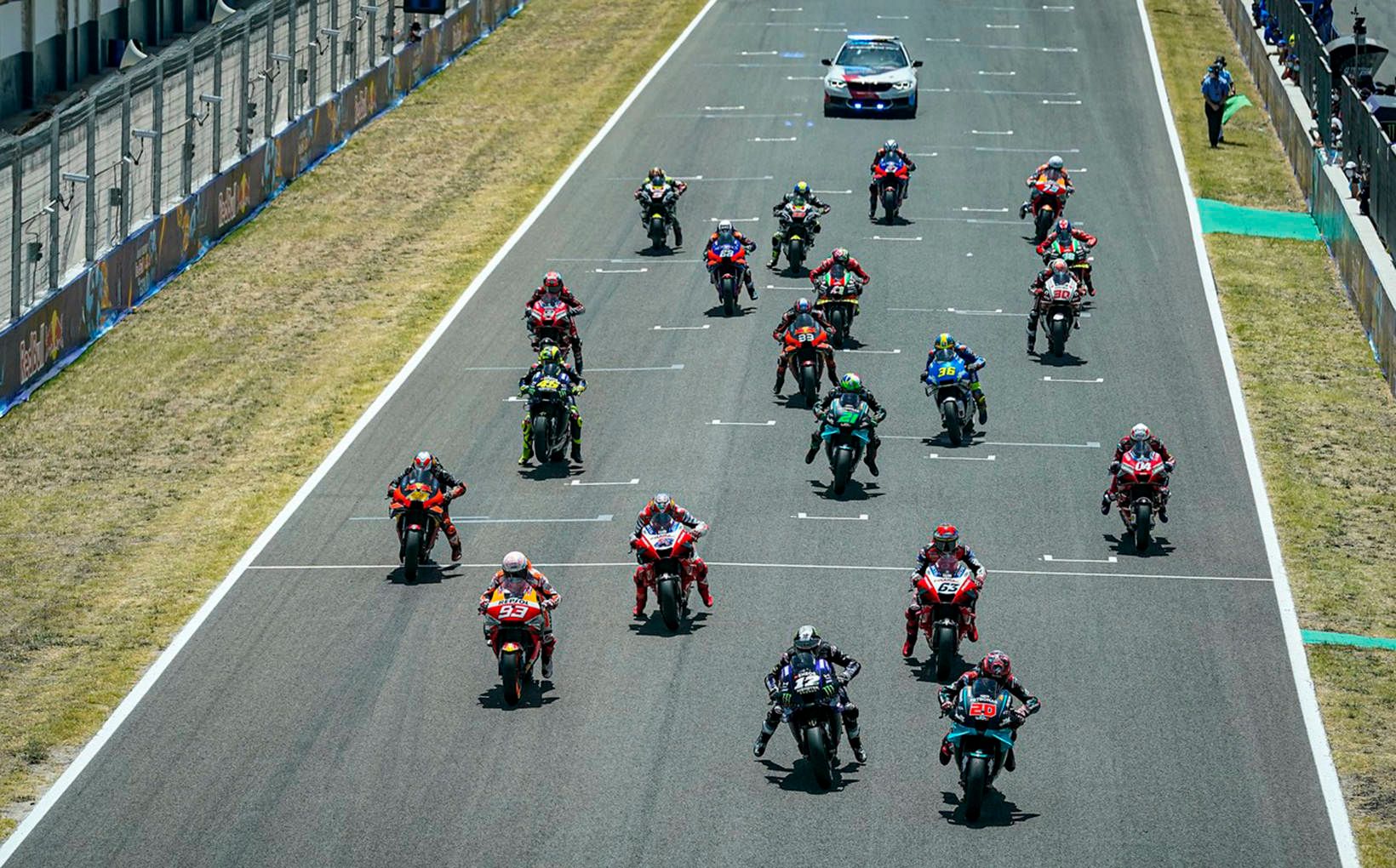 Top Gun Vinales has the opportunity to write his name in to the record books and secure the top spot with incoming Quartararo for 2021 as his teammate whilst it still remains a disaster for Valentino Rossi. The Doctor is not happy with the Yamaha machine nor his results. On the weekend, he parked his bike on the side of the circuit citing electrical/mechanical issues and in his press debrief laughing that he could have won the race. The sarcasm has not left the Italian stallion! We are certain that the success of Vinales would be hurting and tormenting the nine times World Champion. 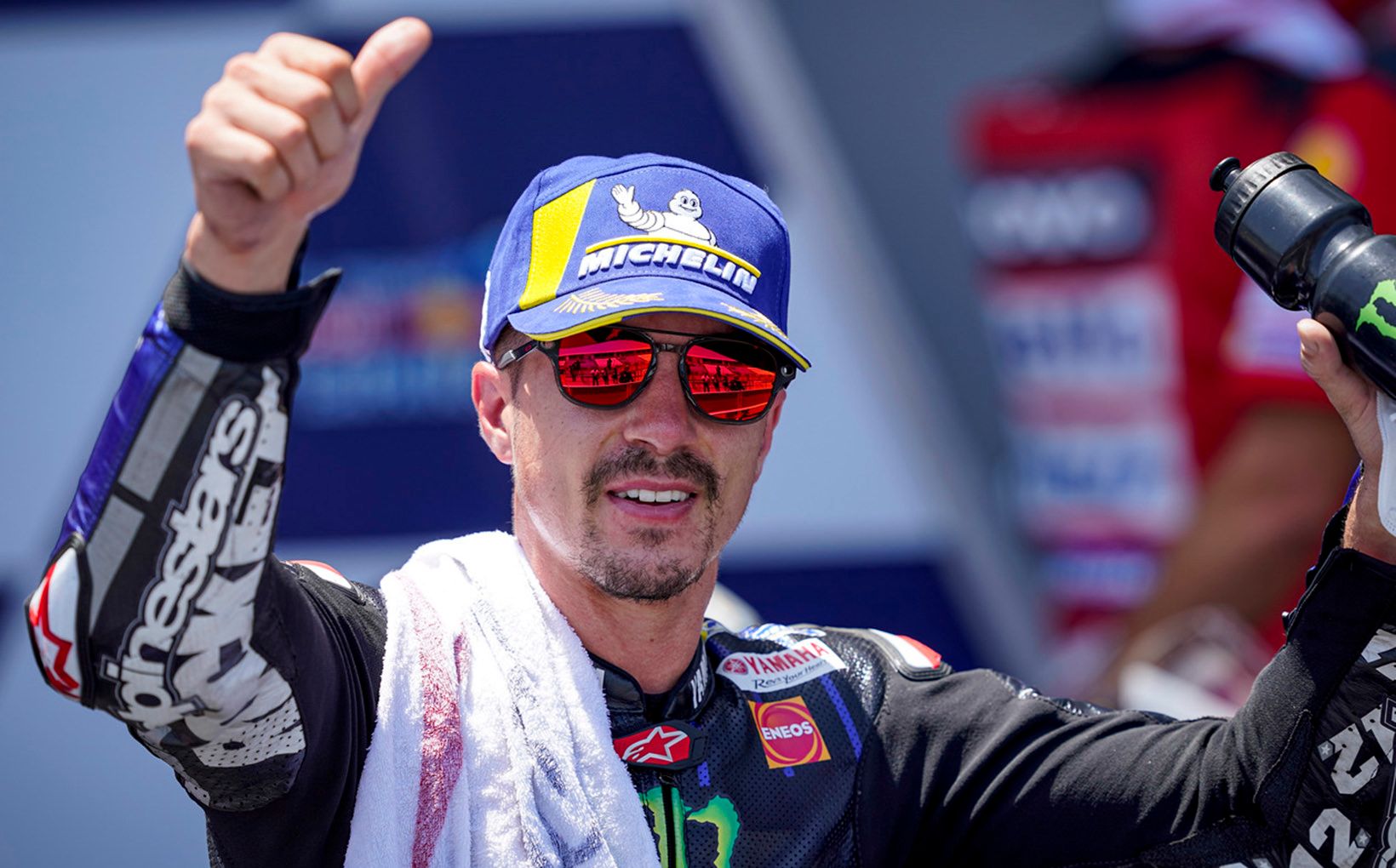 Maverick Vinales: “I’m so happy about the start and the first laps, because I was right there at the front. I took the lead and tried to escape. I wish it was already next Friday, I want to work on the next step at this track. When I lost the front for the first time, I started to travel, especially on the edge of the tyre. I couldn’t turn the bike. So that’s the point that we need to improve on. Maybe the soft front tyre wasn’t the best decision, but we brought the bike home in second place, which is the most important thing. We got 20 points for the championship, and now we have a second race here in Jerez, where I think we’ll have good potential. If we do a good job, we can be back fighting at the front again. The guys did an amazing job all weekend. It was very important to be on the podium at this race, but for the next race we need to find a bit more. We will take our performance from this week as a point of reference and try to improve ourselves, as always. I hope Marc is doing well, because it was a nasty crash. I hope we can fight again at the next race. I want to say ‘Congratulations’ to Fabio, because it’s not easy to win your first MotoGP race, but he controlled it well.”

We wish a speedy recovery to all those injured riders and look forward to bringing you more trackside action and analysis as the next race sessions begin this coming Friday, Saturday and then race day on Sunday. As we know in motorsport, anything can happen on a second attempt at a circuit all riders are now very familiar with.