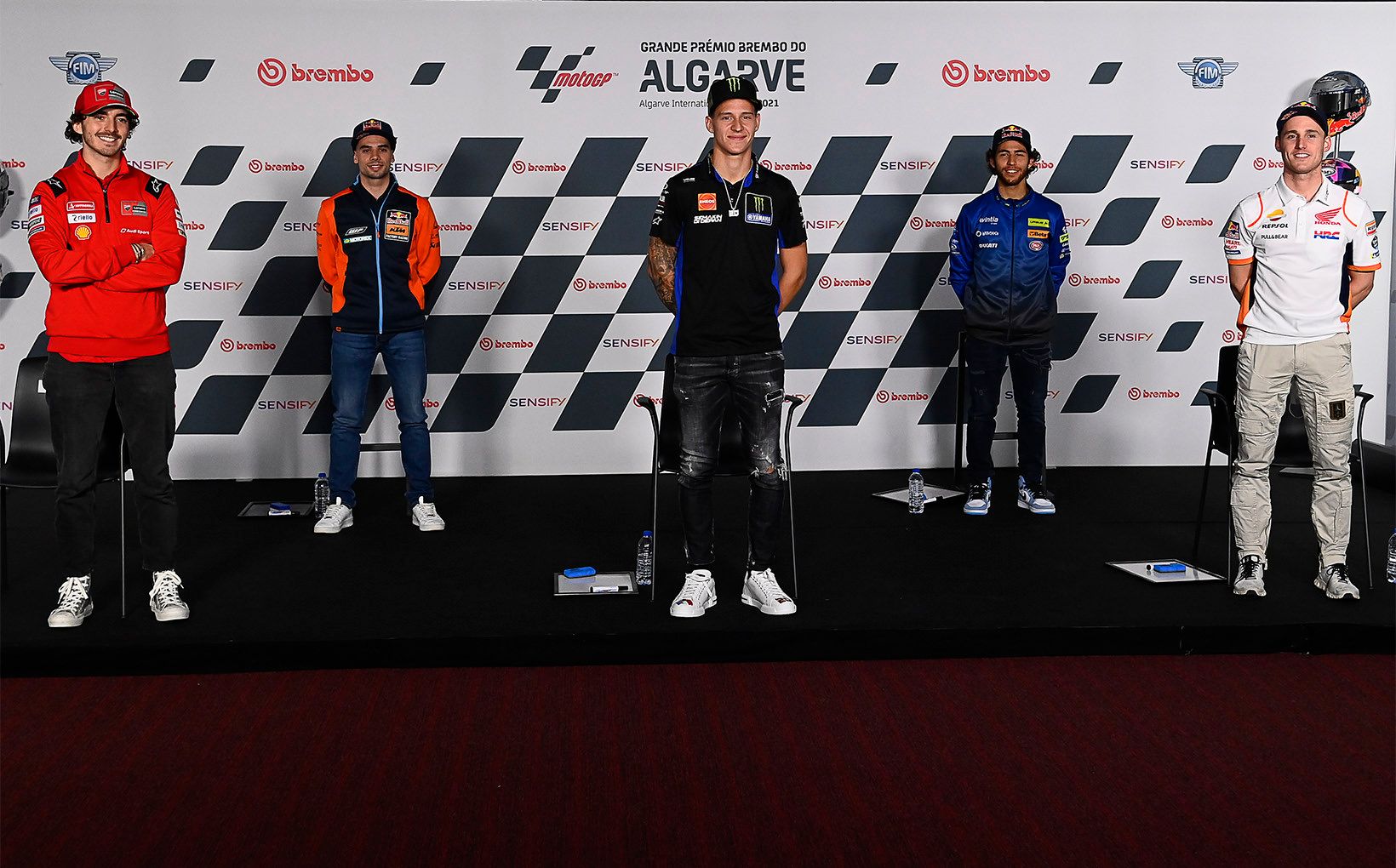 The 2021 Portimão MotoGP race in Portugal is underway with a newly crowned World Champion, Ducati wanting to secure the last victories of the season and Marc Marquez sidelined after being ruled out due to suffering a concussion in a training accident last weekend. It is a real shame to see the Spanish rider having to sit out the race after back-to-back victories and really pushing his Honda machine to the limit to set up the 2022 season in the right way. With that said, he has to rest and recover because an injured Marquez helps nobody especially under the Honda brand. With that said, this weekend all eyes are going to be on Quartararo versus Bagnaia as the battles to win between the two are still red hot and will continue for years to come so long as both remain competitive enough to push each other inside and outside of the circuit. The celebrations for Quartararo were extensive and he is only just regaining his voice! The triple crown is still on the table for the French rider so it is not over until the last lap and last corner of the very final race in Valencia.

Regardless of being crowned, the Yamaha rider has to push because expectation is higher than ever before. In 2022, Quartararo will have to defend his honour of World Champion and there will be riders hungry to dethrone him as their jobs demand 100% at all times. The last two races will be a mixed bag for both riders, with Bagnaia quick in Portugal and slower in Valencia whilst Quartararo is Mr. Consistent! We are excited to see how each rider approaches one another on the track now that the main element of the title, the rider Championship has been decided, although the team Championship is crucial so Jack Miller will be targeting finishing in first and if not, somewhere on the podium. Whereas, Franco Morbidelli is still getting acquainted with his upgraded Yamaha machine, knee fitness levels and confidence. The nature of the circuit here is physically demanding as the bikes accelerate to such high speeds, changes with elevation, wheelies due to the speed from entry to exit of the corners and overall just pushing lap after lap without crashing. They are literally on the edge with ultimate trust in their bikes and tyres. 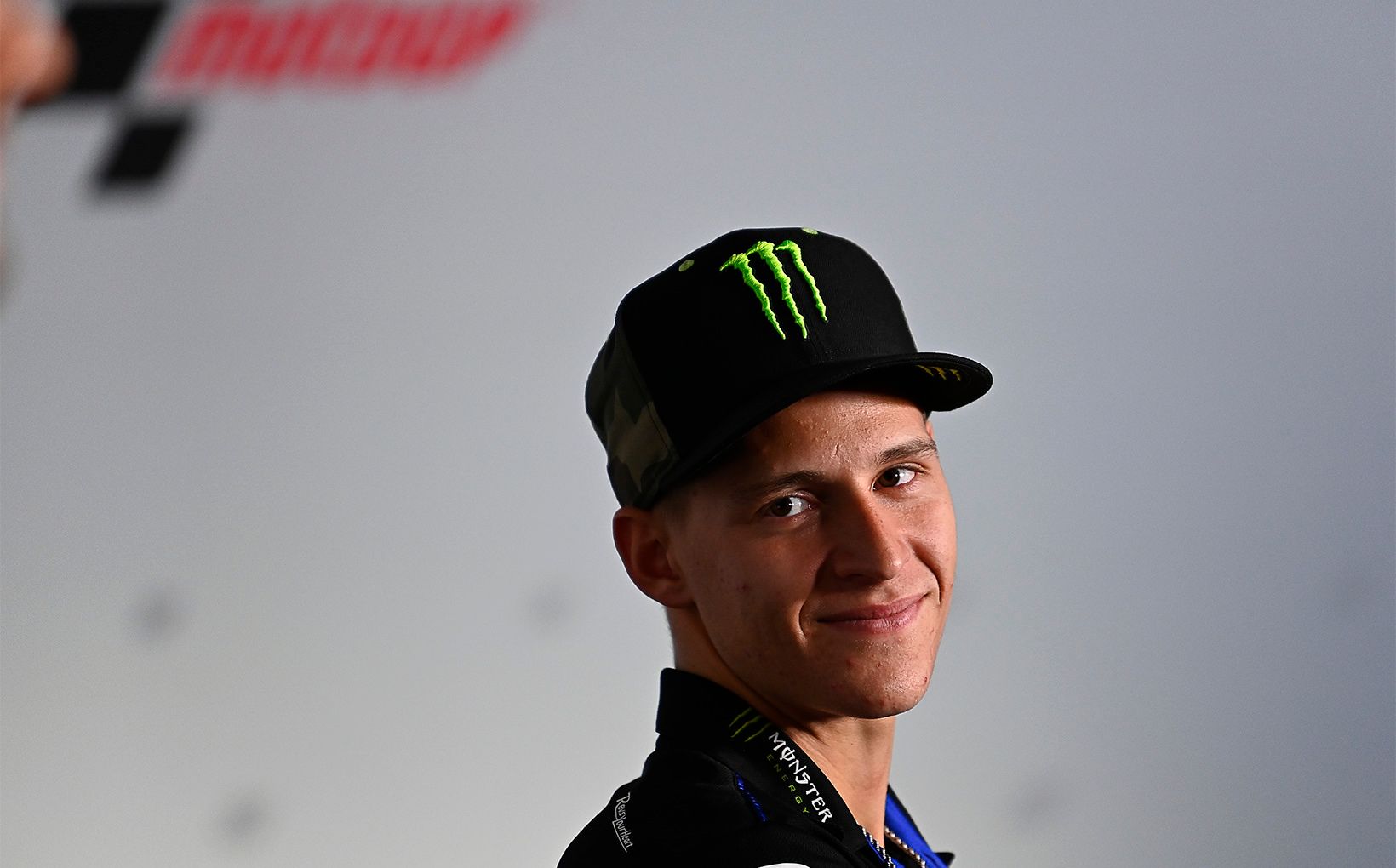 “It took a bit of time, but winning the 2021 MotoGP World Championship is finally sinking in! Now that I no longer have to think about the standings and points all the time, I can go back to the mindset we had when we came here earlier in the year. Our goal is to be first again, as it was at the start of the championship, because we still have the Team and the Constructor Title to fight for. We did an amazing race at this track at the Portuguese GP. The pace was so fast, so I’m very curious to see what we can do this weekend.”

“The Emilia-Romagna GP weekend was positive for us overall. We made a good step to improve the feeling with the bike, and my pace at the start of the race was good. The condition of my knee is improving week by week, so steadily we are seeing progress. Portimão could be a challenge though. I don’t know how physically demanding this track will be, especially considering the elevation changes, but I do always enjoy riding at this track, so I’m looking forward to it.” 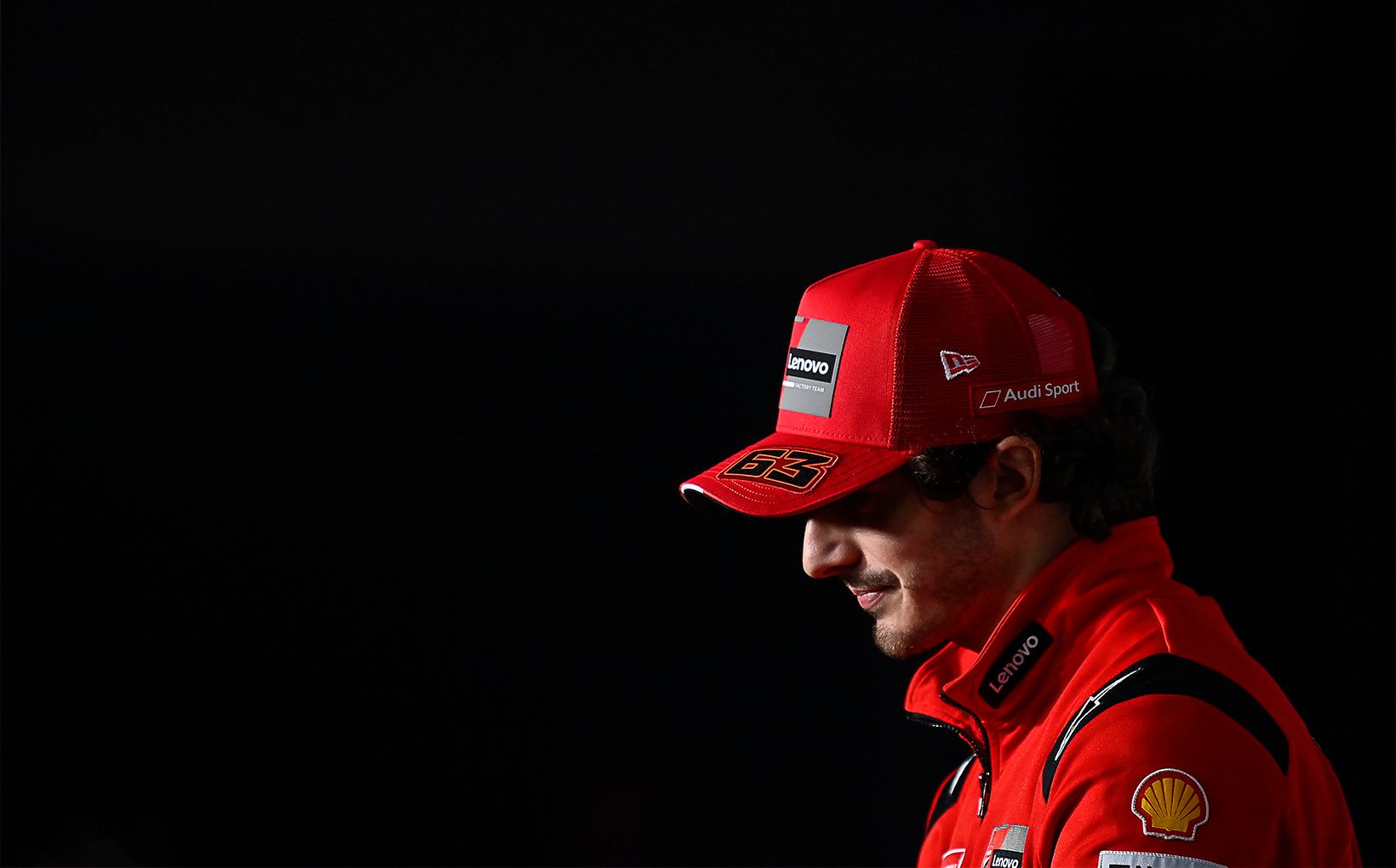 "It was nice to have a few days off after Misano to restore energy before heading into the last two races of the season. The riders' Championship has been decided, but we have to stay focused: our goal is to get the best result every race weekend, so I arrive in Portimão full of energy and keen to do well! In the last GP here, I managed to get on the podium even though I started the race quite far back, and this weekend we will try again to fight for the victory. We must try to bring home as many points as possible to confirm the second position in the Championship and try to secure the teams' and constructors' titles. I am optimistic and confident that we can do well here in Portugal."

"I'm happy to be back racing in Portugal! The Autódromo do Algarve is really an incredible track where I always have a lot of fun! Unfortunately, last time that we had a Grand Prix here, I could not finish the weekend as we had hoped: after a crash on the sixth lap of the race, I was forced to retire, so I am back to Portimão determined to redeem myself and fight for a good result! It is the penultimate race of the year, and I want to end my season positively. In addition, we're still fighting for the manufacturers' title and the teams' title, so I'll do everything I can to help Ducati and the team achieve these two important goals". 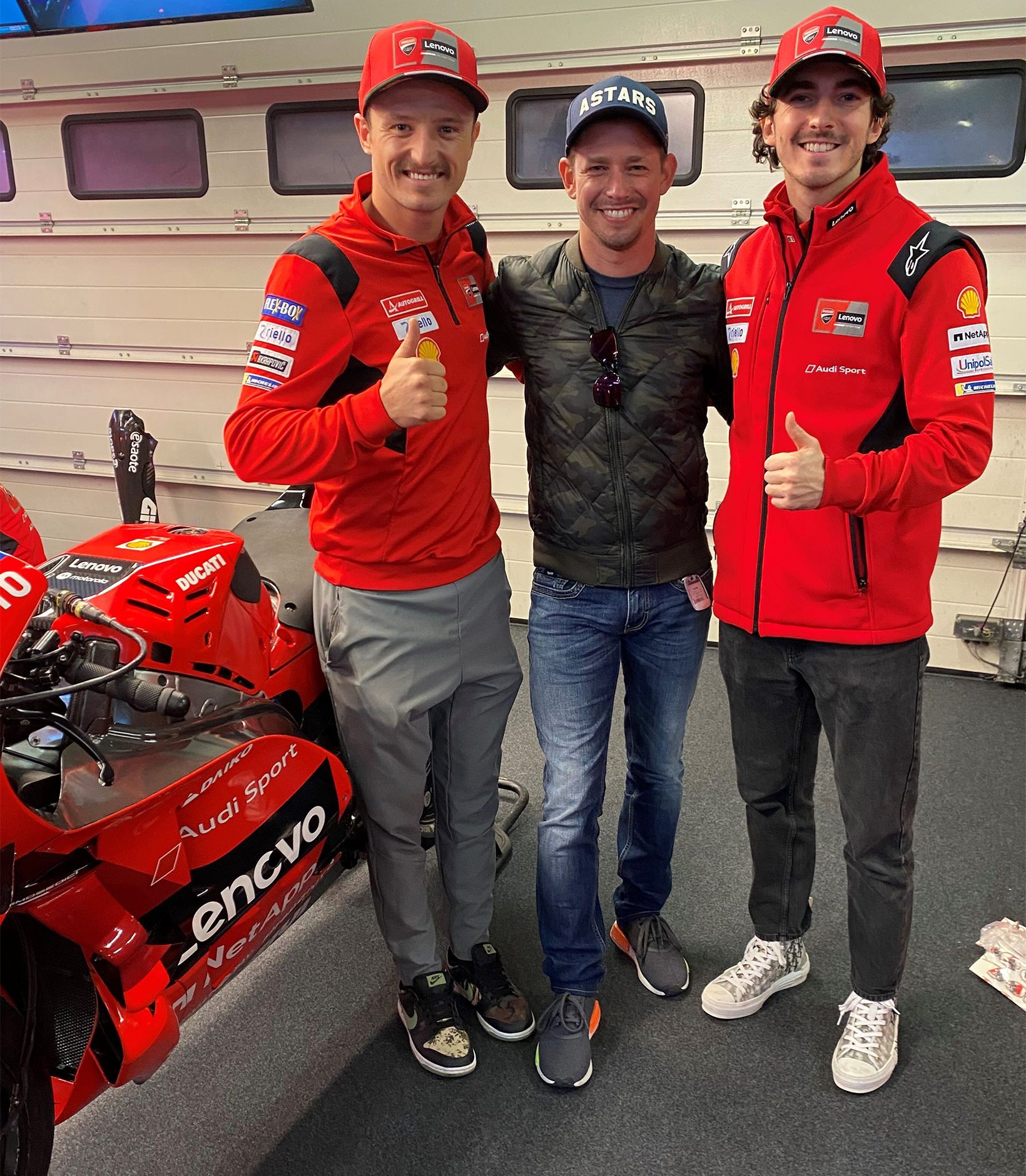 This weekend we have been blessed with the presence of Australian MotoGP World Champion Casey Stoner who has made the journey from his home to the Portuguese circuit and entered the paddock for the first time in quite a number of years. It was super exciting to see Stoner reunite with Valentino Rossi who is retiring, Andrea Dovizioso who is back in action full time and the Ducati riders who admire the talent of Stoner and the fact he is a Ducati World Champion, something the riders under this brand umbrella want to achieve so badly! It was 2018 when Stoner was in the paddock and so much has changed both within his own world and the MotoGP family. In the eyes of Stoner, he wants to see more consistency from the Ducati riders, especially the main two: Miller & Bagnaia. The whole Ducati package needs to be working seamlessly if they are a chance of winning the title and this is something that Yamaha and Honda have perfected over the years. To the Ducati riders, Stoner is the best coach they could ask for and will be there to listen if advice is offered. Stoner has been reflecting on the retirement of Rossi and wishes like majority of us that the Italian World Champion was at the front battling the other riders for victories and podiums. It has been difficult to watch Rossi at the back to middle of the grid over the last few years. Without a doubt, the Australian Champion puts it perfectly regarding the racing and his time in the sport with the ‘The Doctor’. 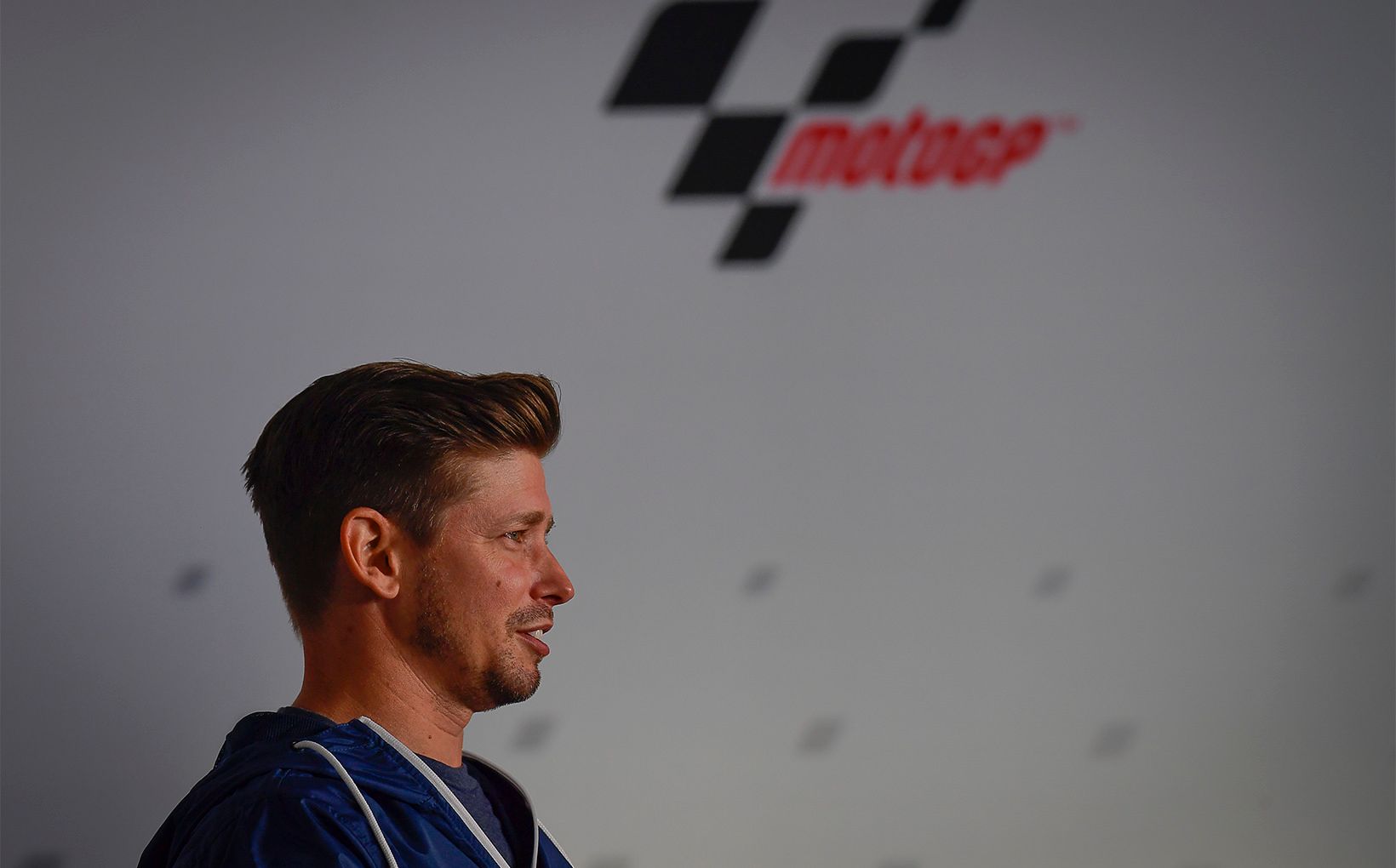 “You know, me and Valentino have had some amazing battles, we had a fantastic rivalry. Some good points and bad points, some things went my way and other things really didn't. But there was one thing that, you know, was fantastic about racing Valentino, and it's that I got to learn from him, whether it was on track or off the track with his media. He was always very savvy, and very clever, very cunning. So I got to learn a heck of a lot. And I think also, my achievements in my career were validated all the more having raced against him in his era.”

We are certainly going to miss the on-track Rossi mania and know that his legacy will live on forever in this sport of two-wheel racing. What an adjustment it will be when he puts his leathers up for good at the last race in Valencia. Tears will be shed; smiles will be present and celebrations louder than ever as we bid farewell to such an iconic rider.

“Portimão is a difficult track and has some very particular characteristics, which other circuits do not have. The first of our two races there this year wasn’t too bad for us, as I was able to make my way through to be in the top-ten. Unfortunately I crashed out though. The target this weekend is to try to have a good race and to make our way towards the front. I had a good feeling there before, especially on Sunday, so I hope that we can be competitive and repeat a great result like we did last time in Misano.”

“Algarve International Circuit is a very unique track and I actually don’t know what it will be like with the Yamaha YZR-M1, especially because we are still learning new settings with the bike. I’m really interested to see if we can be more competitive in Portimão, because in Misano we didn’t have the possibility to be with the changing track conditions. I hope to make a step forward because it is difficult to fight at the moment. I also hope that we have good conditions in Free Practice, because we need this to continue making progress and to complete more laps on the bike.” 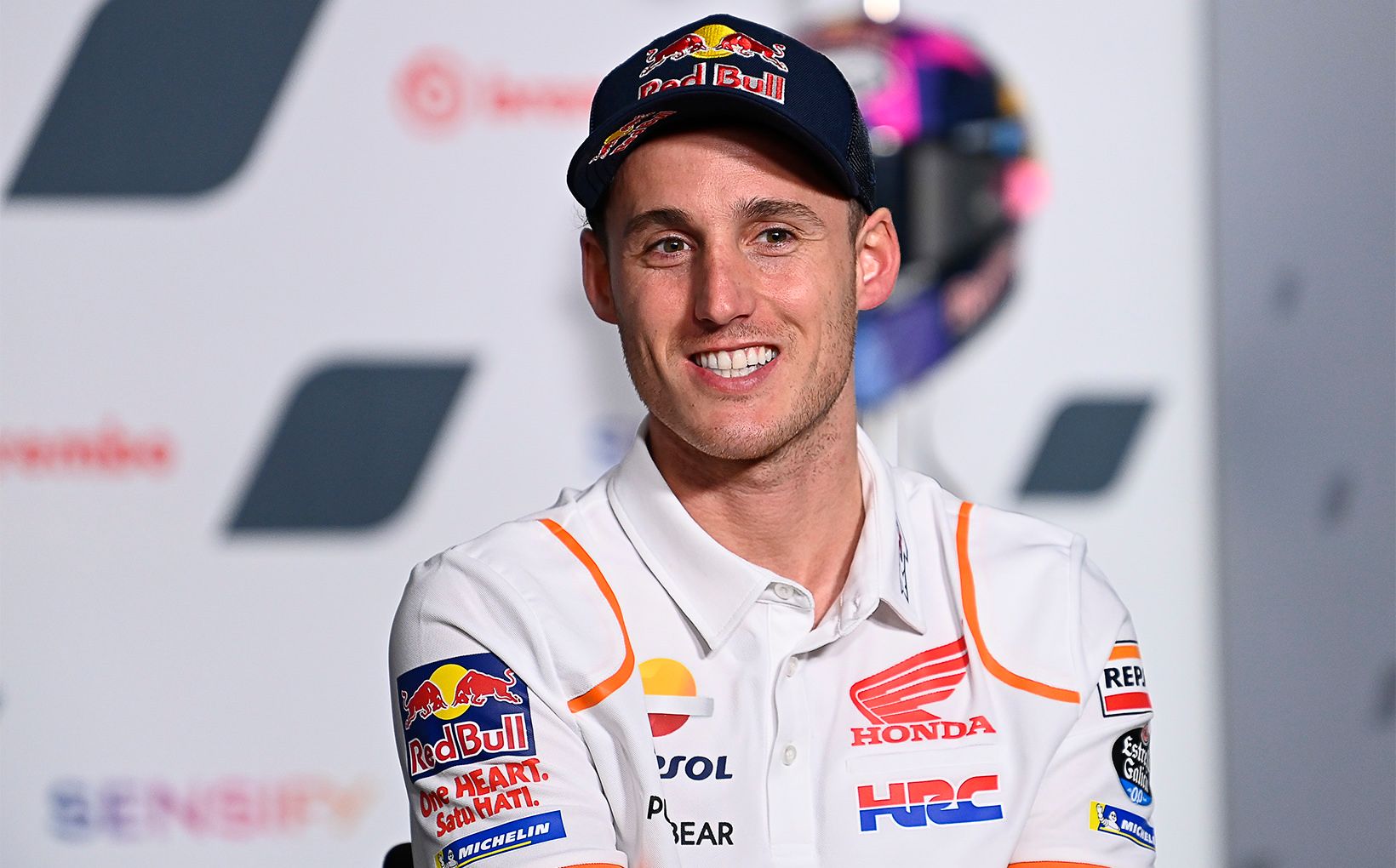 The leading Honda rider this weekend will be Pol Espargaro and Stefan Bradl stepping in for the injured Marquez. One issue that will present itself to overcome is the fact that P. Espargaro has some bad memories of crashing at this circuit. When P. Espargaro crashed into the last corner with the Honda, his mindset changed and he was slightly anxious returning, although he did come to this circuit during the summer break to train so he feels more positive both from a mental perspective and also noticing a more positive adjustment with the bike, so it will be interesting to see how his race pans out on Sunday. Will he push or retreat? In comparison, Bradl is returning with limited track and bike time so he is not being asked to finish at the front, rather to finish with a quality result and more data as every element of productivity is key to build a 2022 machine that will be a front runner.

“We had a great weekend in Misano and we were able to show what we can do on the Honda but now we have a new challenge. Having already raced in Portugal this year will be good as we already have knowledge of the track but I think it could be a bit difficult this weekend compared to Misano. Conditions will be different compared to the last time here so we have to understand what adjustments we will need. The motivation is so high to push in these final rounds and reward the team again. I want to wish Marc a speedy recovery.”

“First of all I hope Marc is recovering well and he can be back on track soon. I am looking forward to riding again as Portimao is an enjoyable circuit where we had a good result towards the end of 2020. It’s never easy to jump on the bike, but we have had a lot of good bike time this year between the races and testing.”

We are ready for this weekend’s thrills and spills! There is everything to play for and no doubt we will see Miller Airlines in action as he showcased us some serious airtime during his track sessions already. Enjoy watching the Moto3, Moto2 and MotoGP classes this weekend with Australian fans watching on the edge of their seats as Remy Gardener also looks to secure a World Championship in Moto2 battling his teammate Raul Fernandez for the crown.