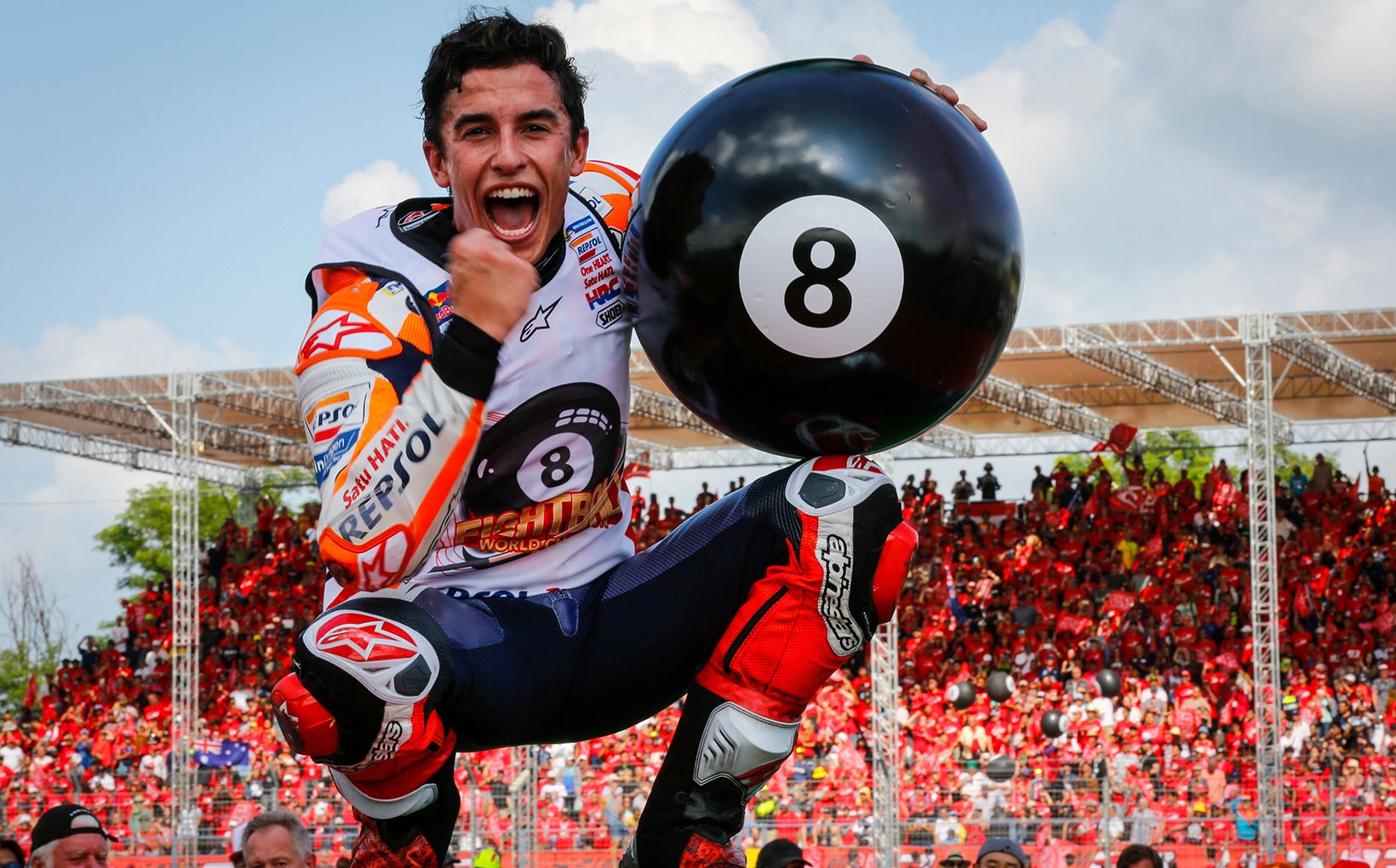 The 2019 MotoGP World Champion has been crowned at the Thailand Grand Prix with Marc Marquez racing his heart out regardless of pain, pressure and adrenaline. Fabio Quartararo was really fast at the event with Marquez having to push himself in order to stay with the French rider and then it became a race whereby he studied Quartararo lap after lap knowing where he would lunge and take a shot at race victory. Absolute class! 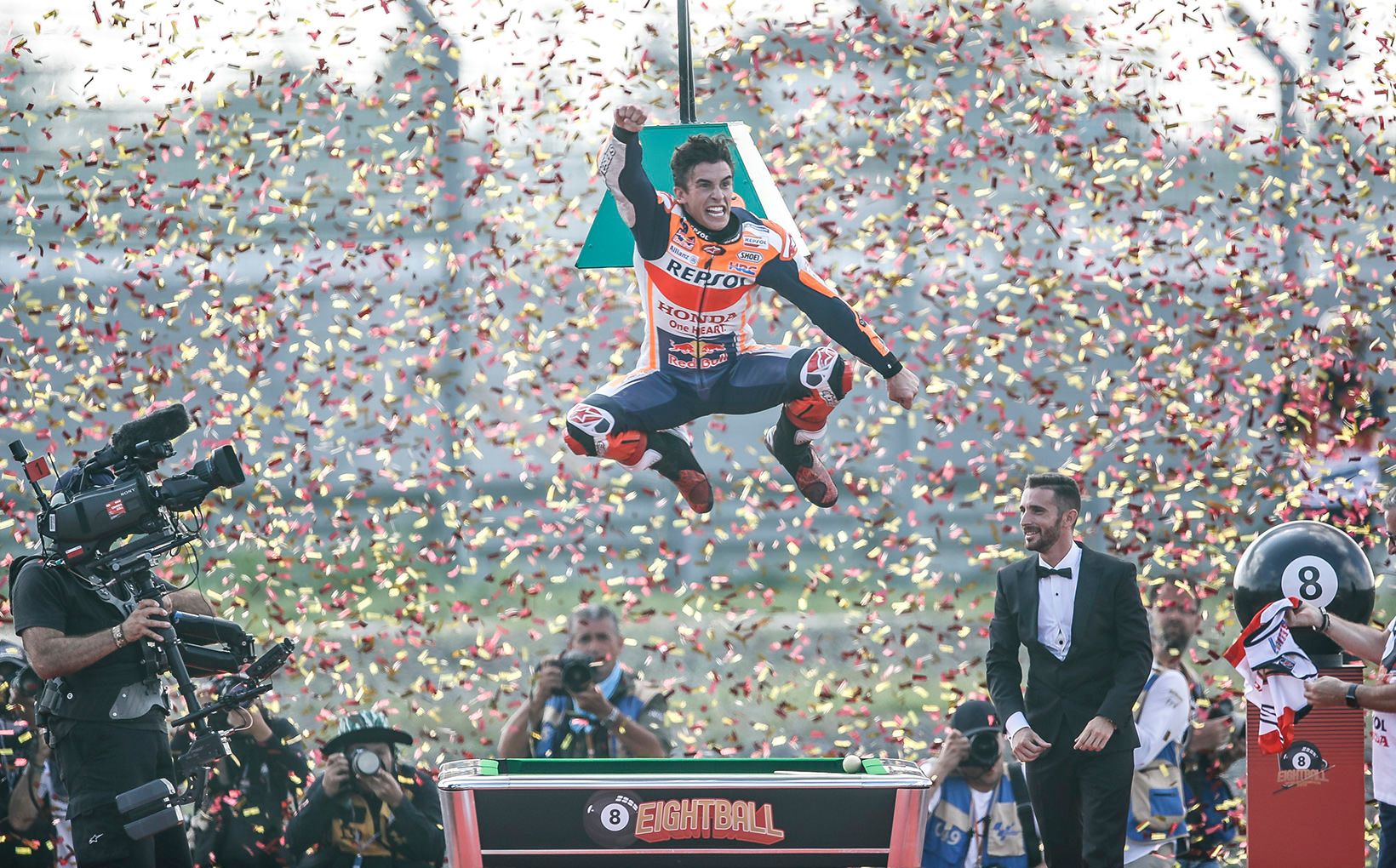 MM93: “I planned to win the race. My target was to find the best way to win the race. Fabio was really fast in one part of the race. I catch up, study for last lap and I knew that T3 and T4 was very fast. An amazing year, the Repsol Honda team did an amazing job, thank you to the sponsors and all of the people around me to celebrate the title”. The magic #8ball title is there for the Spanish rider and what a way to seal victory after his high side crash on Friday. People did write Marquez off as one to hold back and not go for the win, however, knowing his style, we had a feeling he would rather go down fighting than to let someone win ahead of him. The statistics are marvellous for the Spanish Ant and it will be a true test of courage, ability, bravery and strategy to beat him next year. Right now, Marquez is charging at the record books in particular records of Valentino Rossi, Mick Doohan and Giacomo Agostini. As a result of this Championship, Marquez is only one of three riders to have accomplished six or more premier class titles! The domination of such a young rider is a true display of the sacrifices he has made to be considered now one of the greatest of all time. 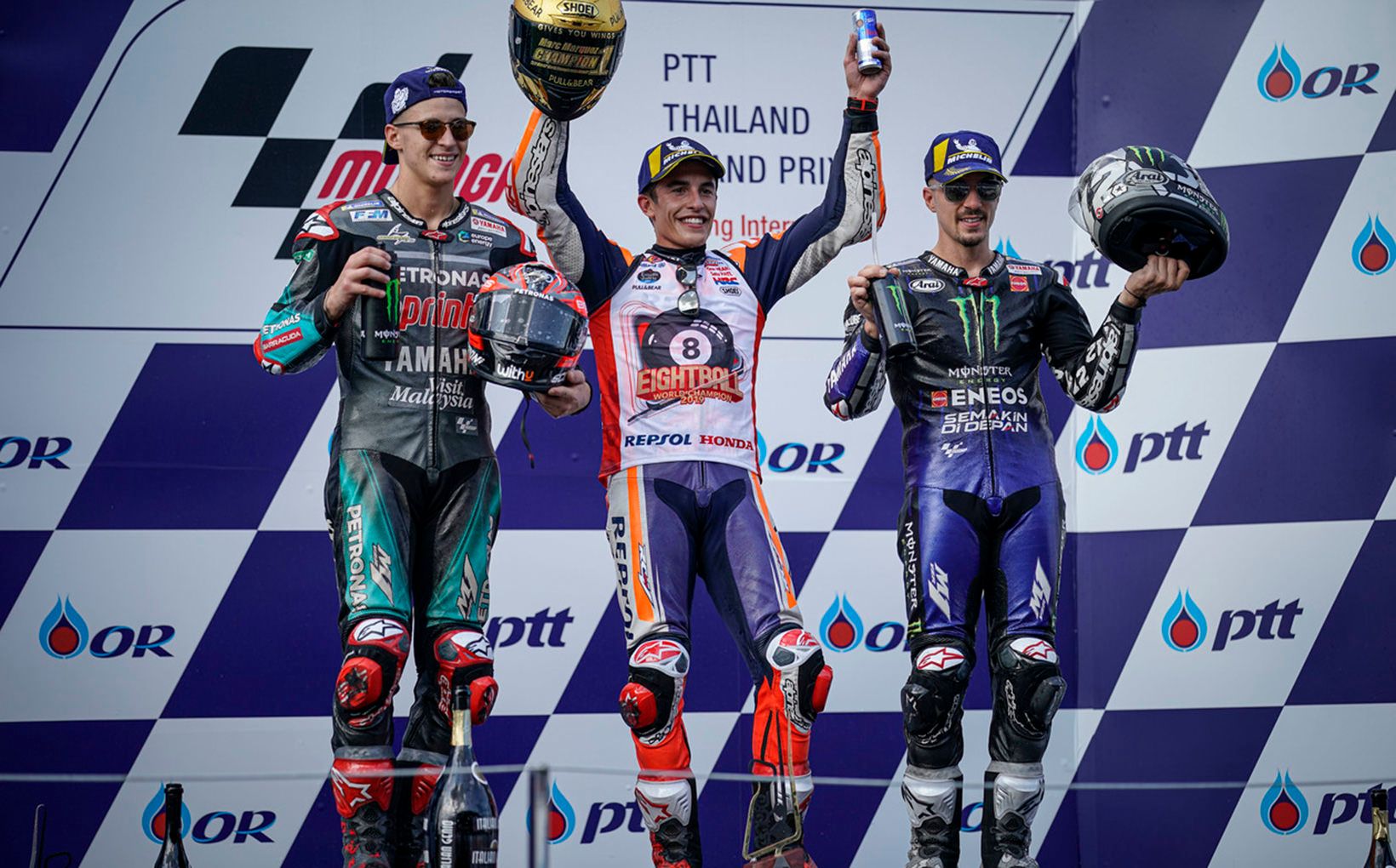 MM93: “I’m very happy. I’m so happy. When you have an advantage like I had you realise you are so close to the championship but you need to find something to keep you motivated. Today it was winning the race and it’s what I did. Fabio was so fast during the race but I never gave up, even during the middle of the race where it looked like he was escaping. It was a beautiful way to win the championship – even if I wasn’t thinking about it on the last lap! Arriving in parc ferme with the whole Repsol Honda Team there was fantastic; it’s a dream to do it with the whole fan club and the nice celebration. Every year is special, it’s not easy to keep everything perfect each year to fight for the title and I had a very hard winter with the injury but myself, the team and HRC managed it well. Now we’ll enjoy this feeling a little bit!” 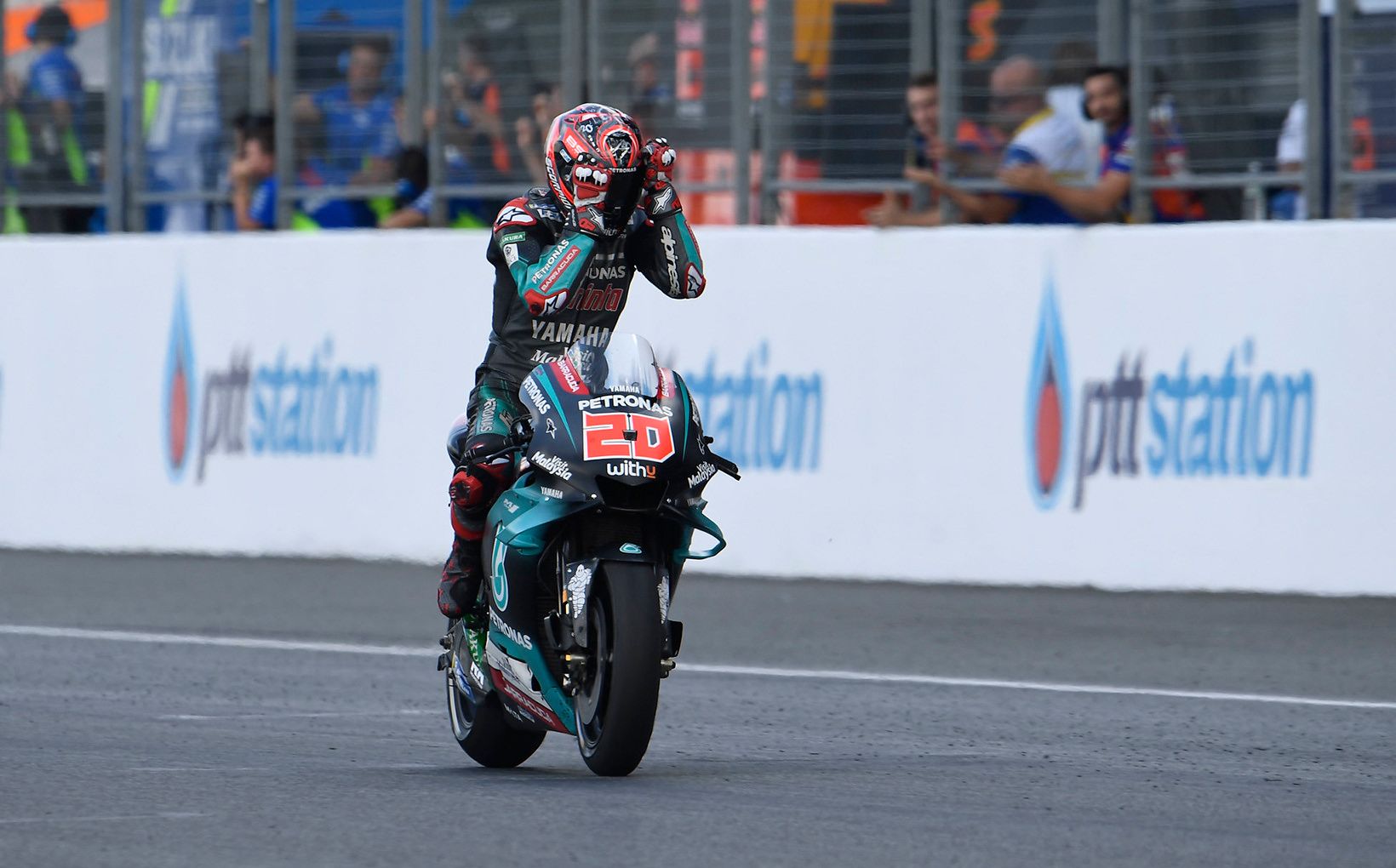 On the other side of the podium, it was not an easy race to stomach in second place after pushing for his first ever victory. Quartararo was superb from lights out and really dug deep in order to take it to Repsol Honda rider Marquez. The Frenchman is definitely one to watch in 2020 and is utilising the current season to re-write his resume in the best ways possible. Watching the Petronas Yamaha Sepang Racing Team rider lose at Thailand was tough because he did try right up until the last corner to secure the top spot. 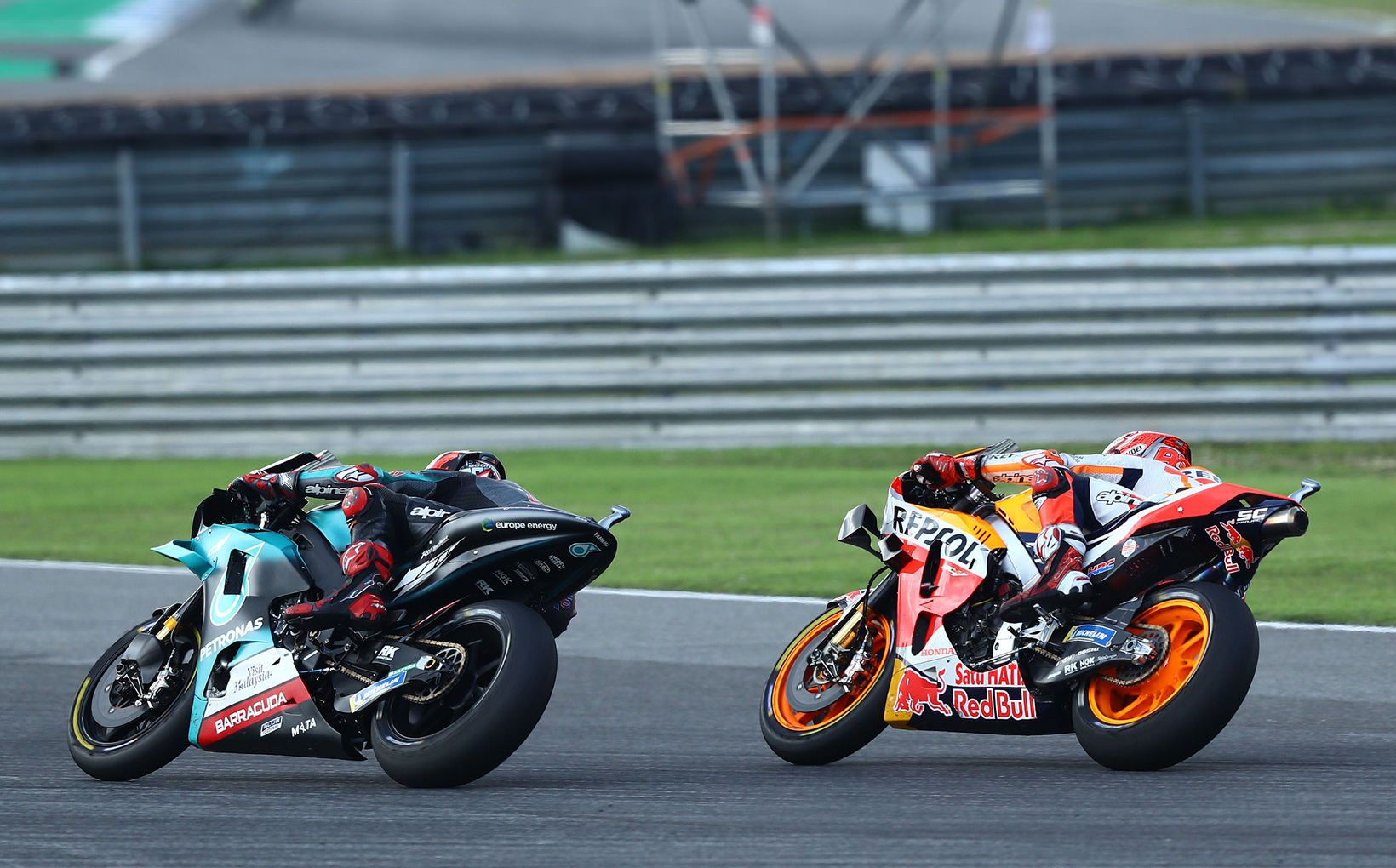 FB: “It was an amazing race, thanks largely to feeling so comfortable with the bike from the very beginning. Unfortunately, we didn’t finish on the top step of the podium, but we were able to have another fight with the new world champion right to the last corner. It was an important race because we’ve made another step forward at a track that isn’t exactly perfect for us. Marc’s race pace in practice was three tenths of a second a lap faster than us, but we were able to battle with him. I gave it my all in the last corner because if I didn’t, I wouldn’t have been able to sleep until the next race in Japan, and I can’t wait to head there next!” The world is loving the development of a rivalry between MM93 and FB20. Plus, with Rossi changing crew chiefs in 2020, Jorge Lorenzo recovering and Andrea Dovizioso hungry to win a title, who knows what could happen as progress forward with two wheel racing. 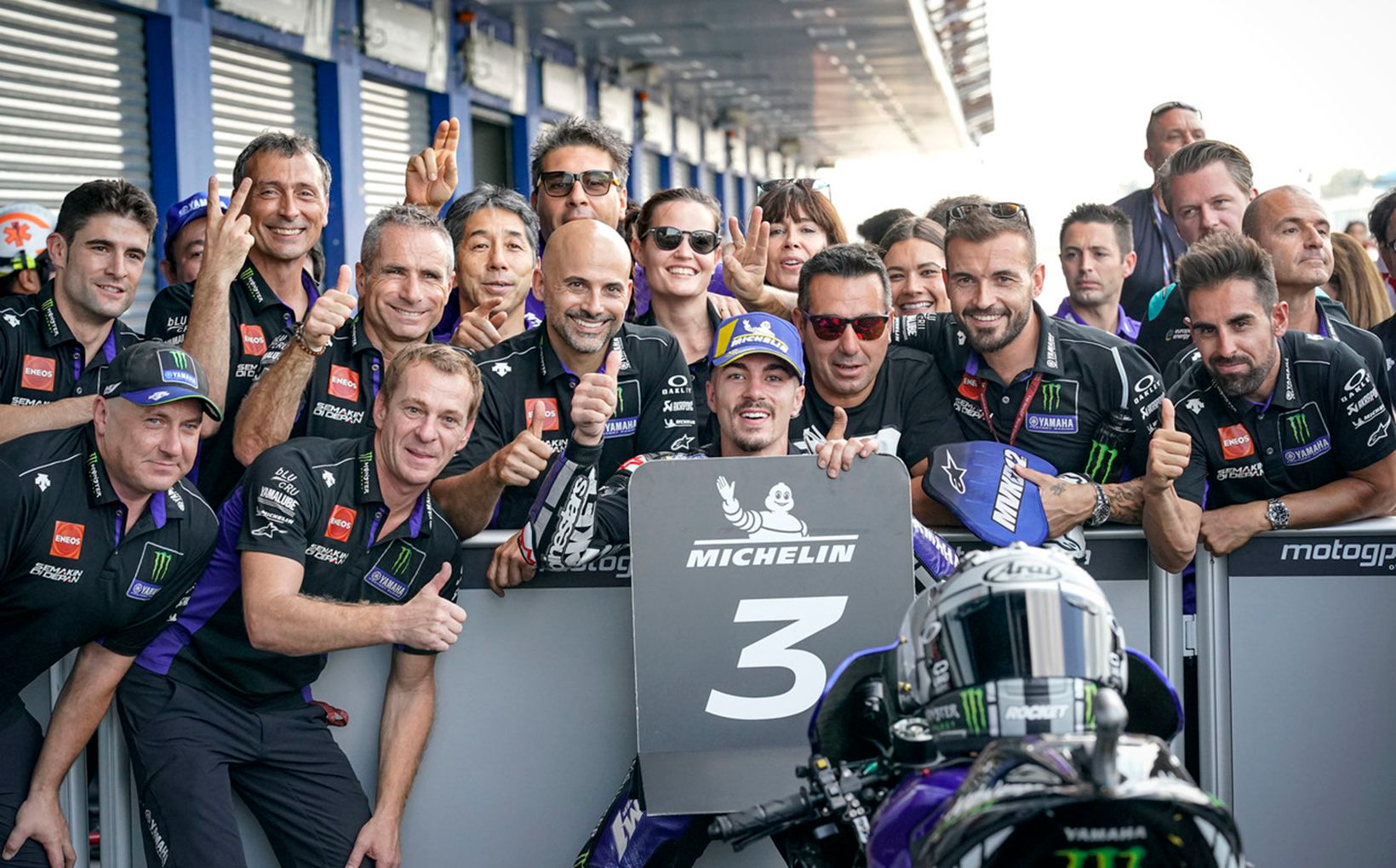 It was a fast pace between the two front runners which Maverick Vinales had trouble keeping up with. The Monster Energy Yamaha rider just could not compete and had to settle for a third place finish which was a relief considering he struggled with the fuel load at the start which could be a reason why his races come to life in the later part. With that said, Top Gun Vinales is definitely growing as a rider even when presented with issues which is great to see. Usually, the Spanish rider would throw the towel in and succumb to the negative thoughts he has been so common to showcase. The growth and maturity is paying dividends. 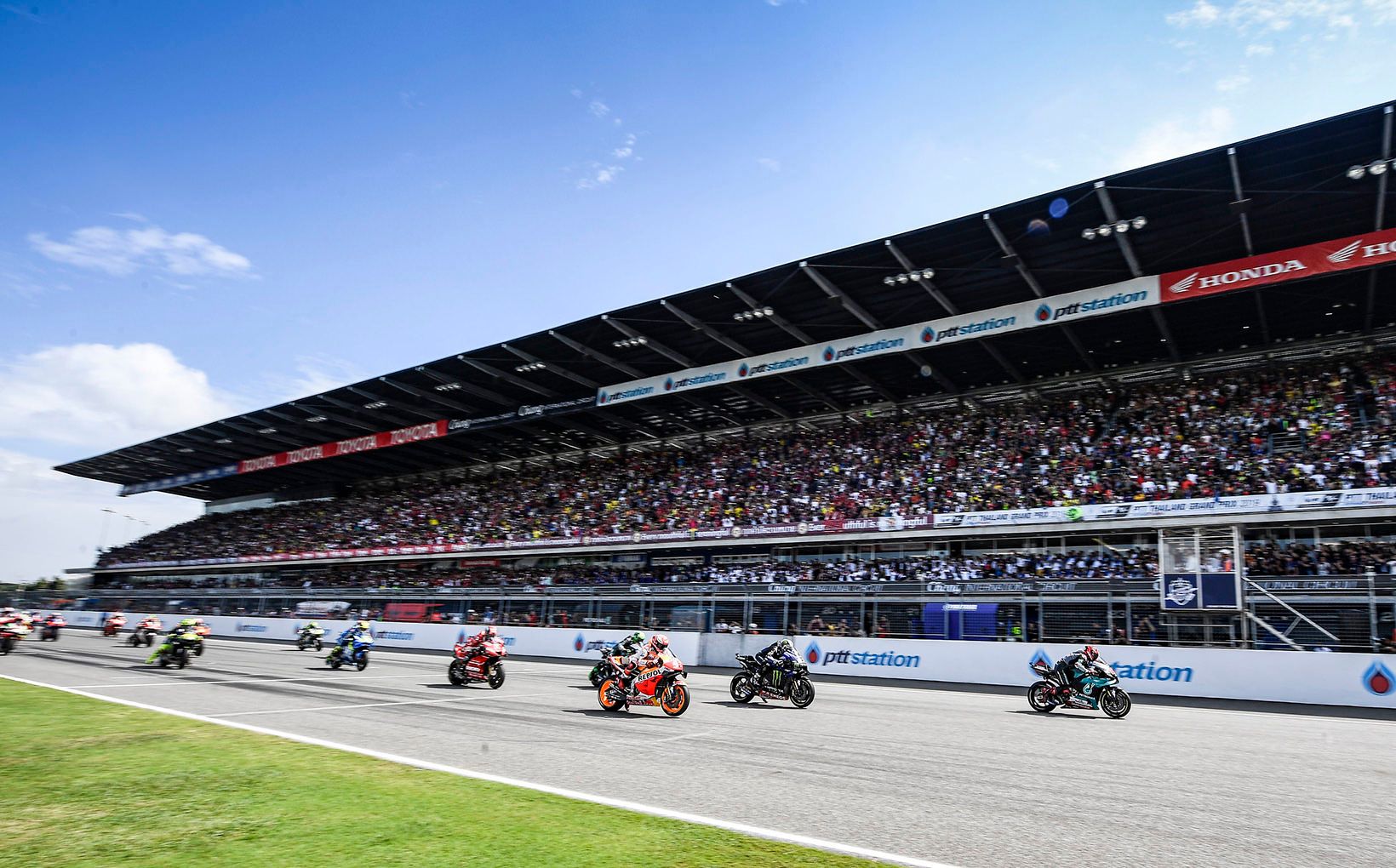 MV12: "I'm happy, I'm feeling positive, and I accept the third place, but it's not enough. We have to work harder and make another step. I noticed a difference between myself, Fabio, and Marc, especially in traction areas. But I was still able to hit good lap times and close the gap at the end of the race. This means we have some strong points, but we have to improve the weak points. When you have no traction and a full tank, it's very difficult to get the lap times. As soon as the fuel went down a bit, I could carry a lot of corner speed and make the lap times again. I had a much better feeling in today's Warm Up than I had during the race, so we need to understand this and improve for Japan." 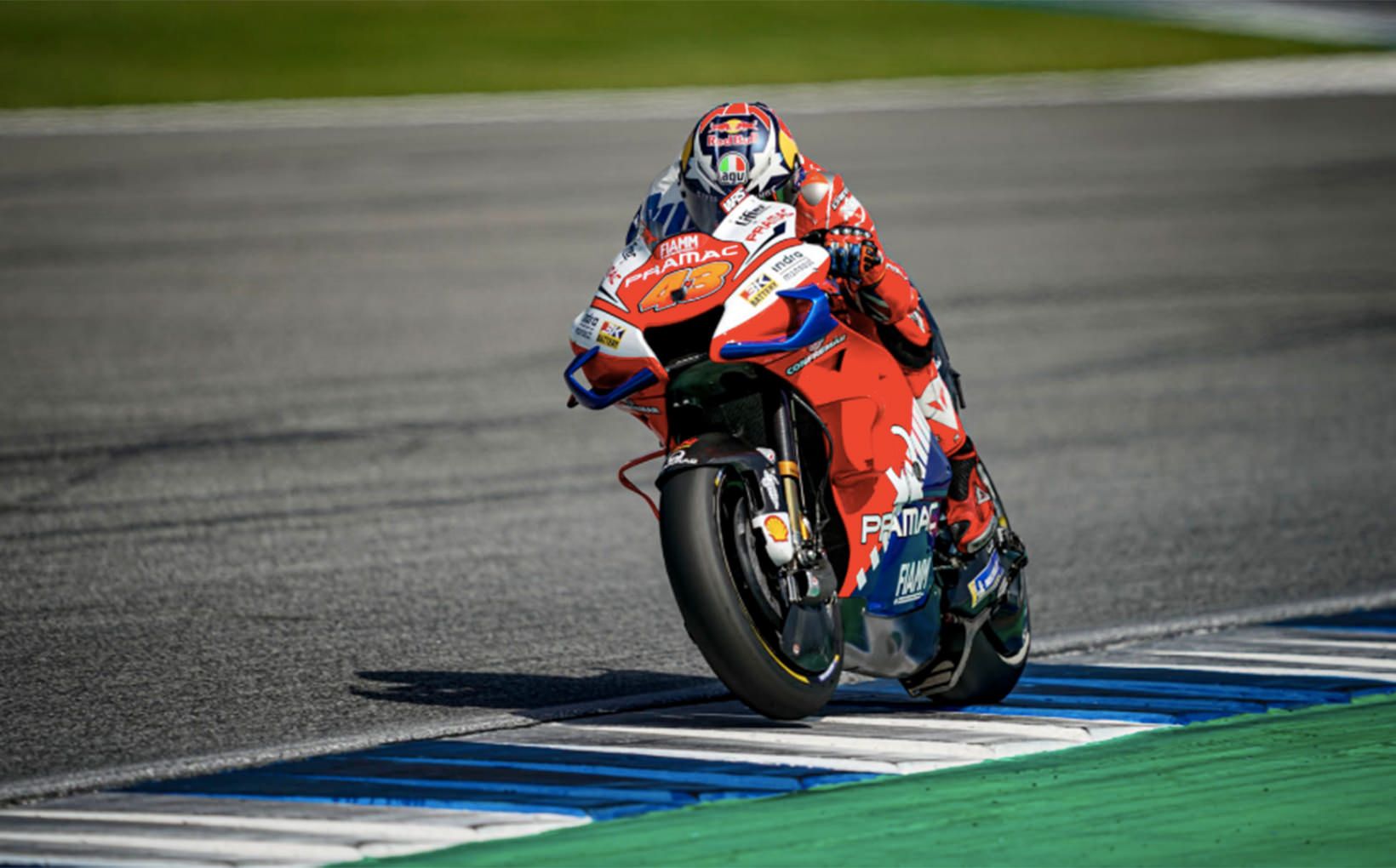 To those Australian fans who were hoping for a Jack Miller heroic ride, they were left disappointed as the Pramac Ducati MotoGP rider made a major error and switched his bike off at the very start which resulted in him pushing his bike off into the pits and completely derailing his chances of another podium finish. When you look back at the start, you can see how one mistake can be so costly and what it does to the mindset of an athlete: positive to negative in seconds. JM43: “It was my fault. There's no excuse. I inadvertently turned off the bike and was forced to enter the pit lane. It's a shame because we had done a great job over the weekend and we had the race pace to stay in the Top 5. We'll try again in Japan.”  We must say, Miller did well to finish in 14th based on how far back he was and there is no blame game here. By owning up to his mistake, Jackass Miller can reset and bring his A+ abilities to Japan where a win or podium is up for grabs. 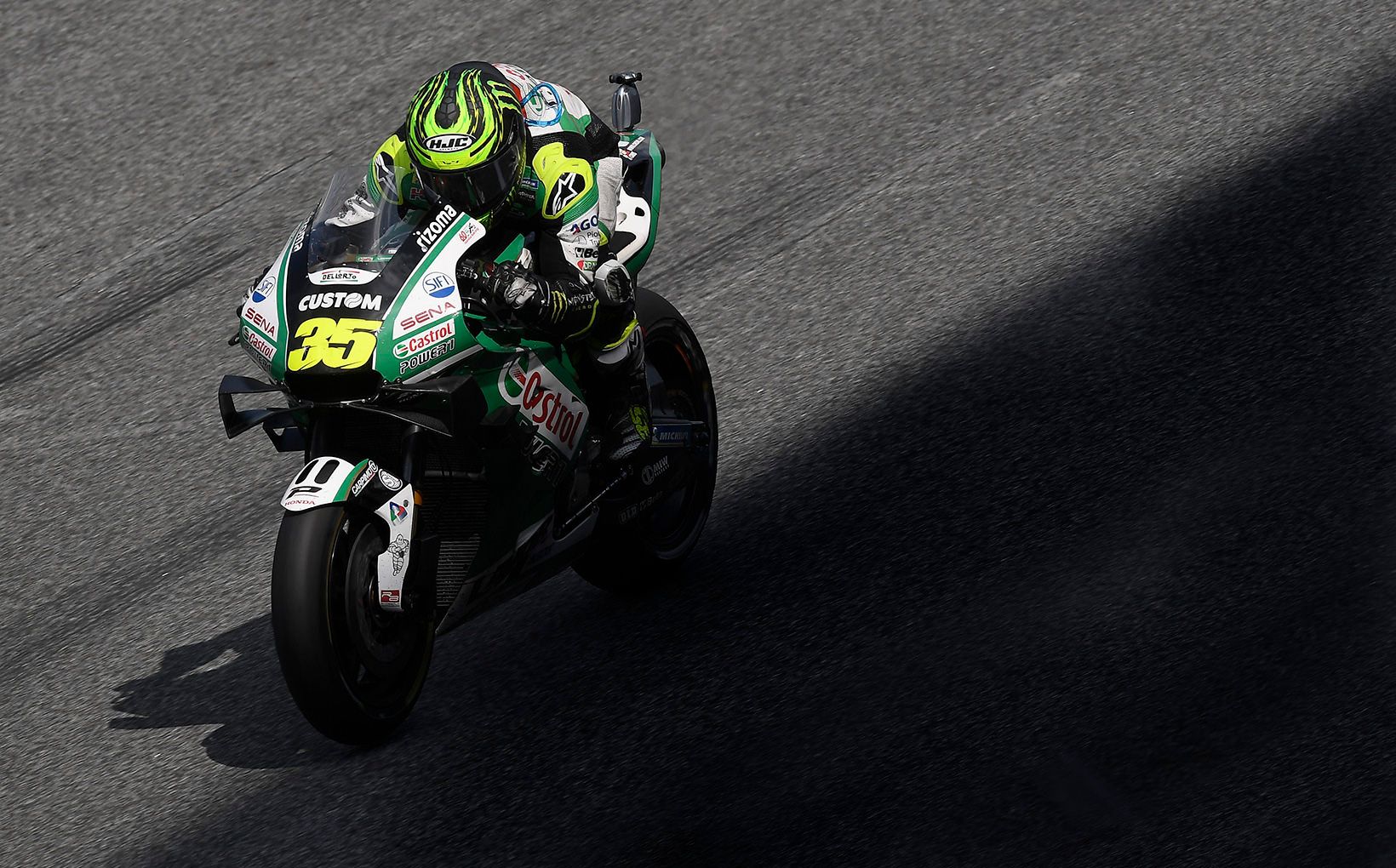 Fellow friend and competitor Cal Crutchlow did not have an easy race either with a lack of fitness and also brake issues at the very beginning of the race. Crutchlow had to manage numerous issues and fought back to finish 12th which is still quite hard to digest considering his previous results plus where Marquez is putting his bike majority of the season: first and second! 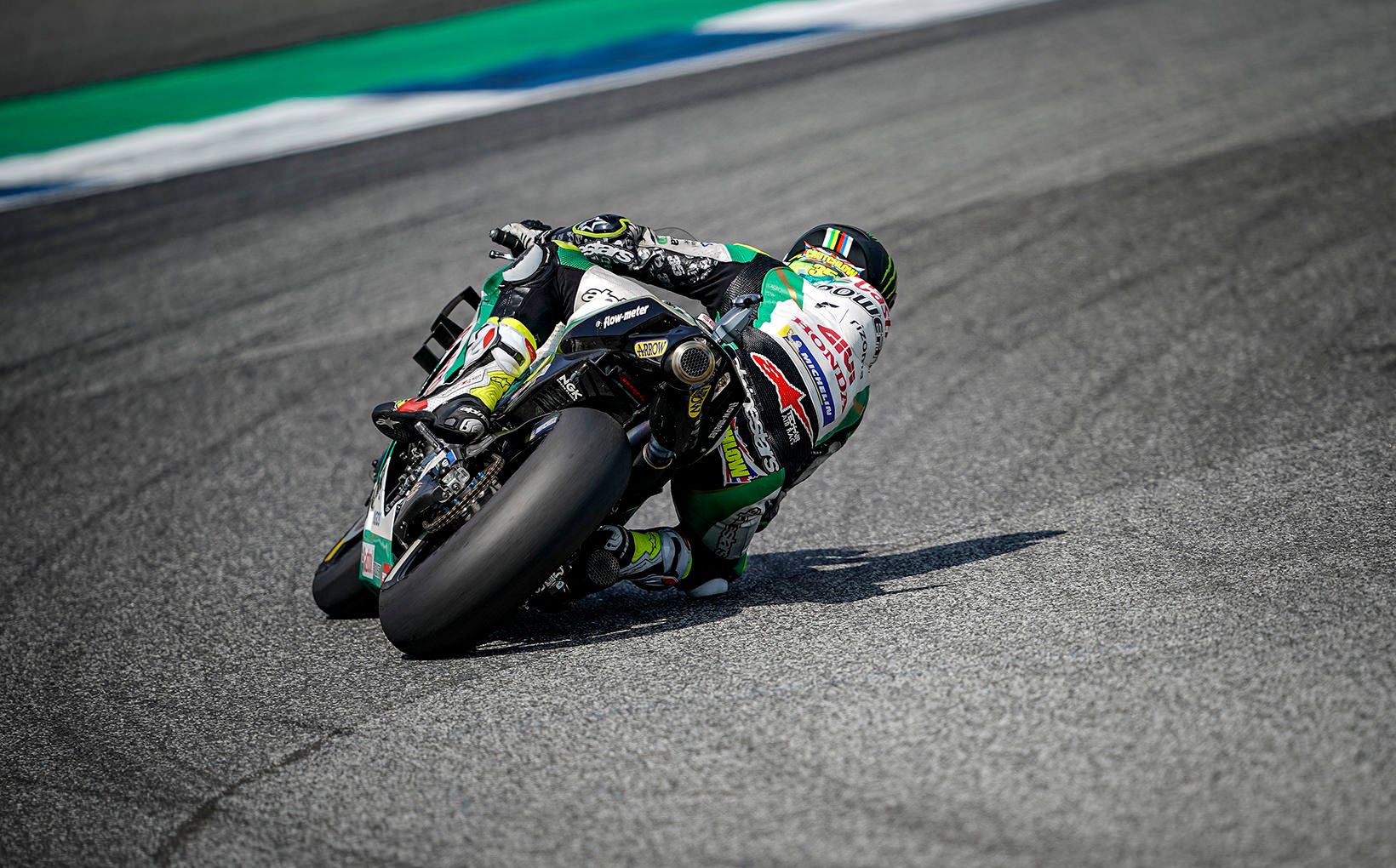 CC35: “Today was not a great result, but considering the first five laps of the race it was very difficult. I had a brake issue at the start of the race and I was unable to stop, so I had to figure out how to ride the bike with that front brake problem. Then, once I was alone and able to ride, I was able to pick riders off. So I lost a lot of time over the first laps of the race, but then I managed to ride my own race to grab a few points in what was a difficult race weekend. We know we need to improve as a team, and also myself, for the next race in Japan. We also have to give congratulations to Marc Marquez and Honda on the achievement of winning the championship and now we look forward to Japan.” 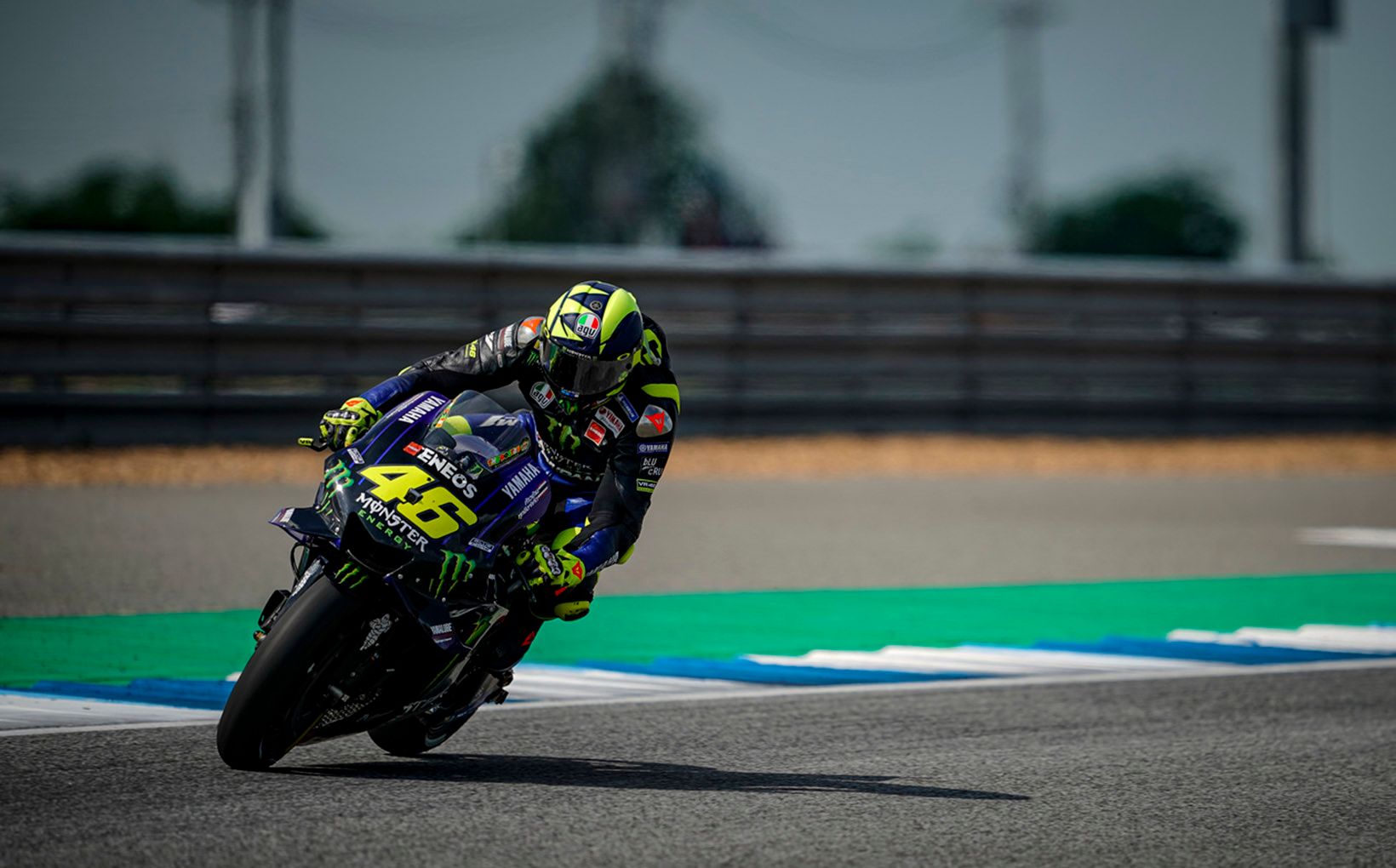 With four races to go, Rossi wants to improve and determine why the rear tyre is giving him so much grief. It is the same problem repeating itself like a broken record. VR46: "Unfortunately, I always have the same problem. After seven, eight, nine laps I started to suffer a lot with the rear tyre. It looks like we have a lack of grip on the rear, yet at the same time we stress the rear tyre more, so the rear tyre then loses performance. Unfortunately, I had to slow down. This race was very similar for me to the previous one, which means there's a problem, because this is not our true potential.” You can feel the frustration in his words and know that he is capable of so much more. We are used to Rossi fighting for top spots plus pushing other riders to the absolute limit. If the issues are not fixed soon enough, Rossi risks being a midfield rider which is something he will happily voice as a disaster! 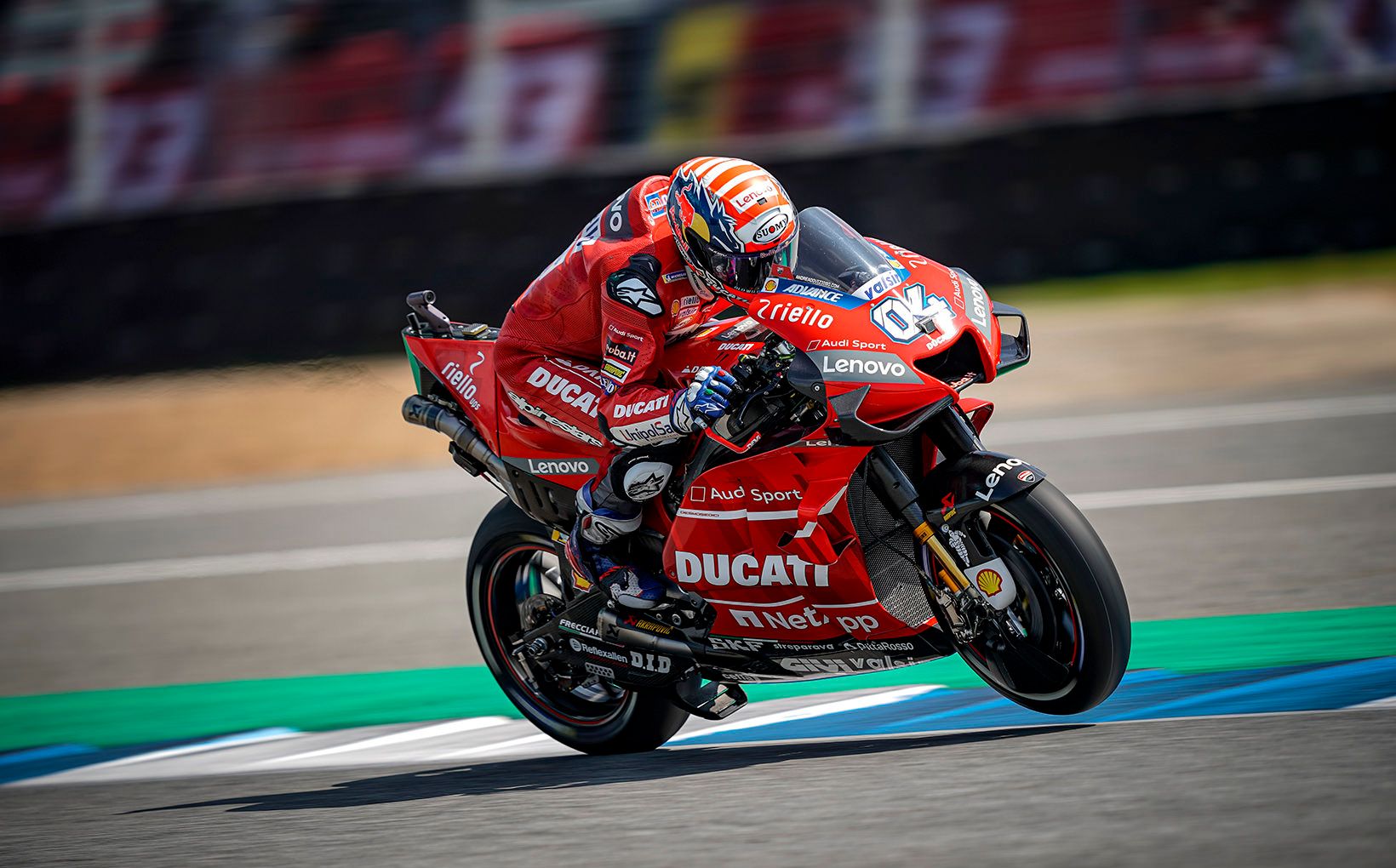 With the pressure off, DesmoDovi must also isolate their bike weaknesses and look for solutions otherwise they are at risk of enjoying second place once again in a title race. AD04: “It was rather a difficult race because unfortunately we weren’t able to improve enough in T3 and T4, where also in practice we were losing out to the frontrunners. It’s a pity, but I’d like to offer my congratulations to Marc and his team because they have had a spectacular season. We tried to fight against them but it just wasn’t sufficient, so now we’ll have to work even harder in view of next season”.

Japan is next. Do you think Marquez will go easy or keep fighting to ensure first or second is his only option of success? We are looking forward to rest of the flyaway races.

Guess Who is Back in Town in Barcelona? Marc Marqu...