Marquez Slides Towards The Title With Dovi Behind By 33 Points 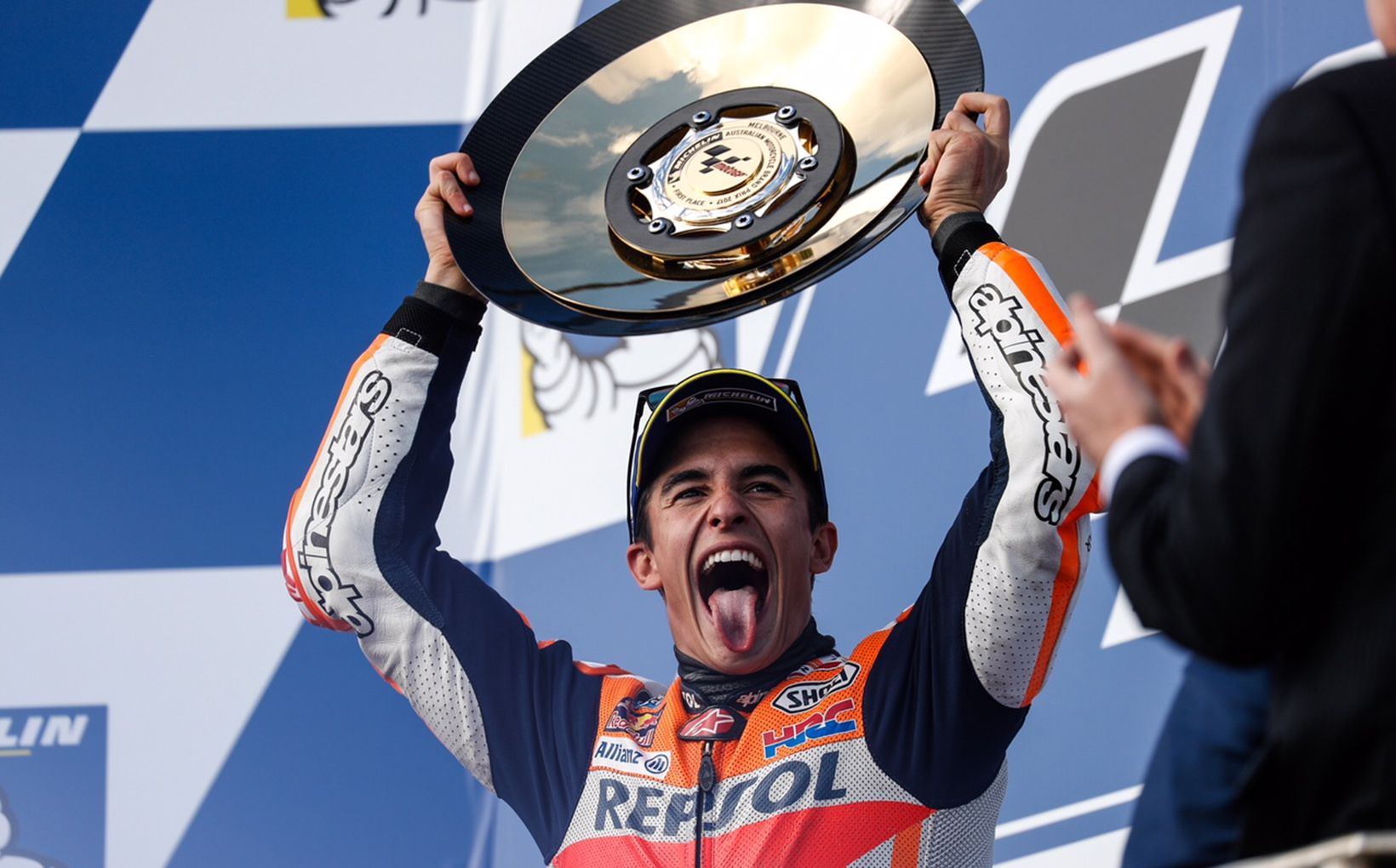 Marc Marquez is riding with perfection at the Phillip Island circuit even when the pressure of the World Championship his on his mind. The Spanish rider is calm, focused and does not flinch when an error is made. In fact, he just gets back up from a crash, re-focuses and then goes on track to smash the sectors into pieces and go fastest once again. Watching Marquez slide into Stoner corner on Saturday was absolutely impressive. He was pushing the bike like it was on ice skates and loving every moment of it. What a way to enjoy riding in Australia. Regardless of the Championship situation, a small crash this weekend and confusing weather at times, the Marquez finds a way to put his Repsol Honda where it needs to be and that is on top. Marc is hero to many and a superstar to so many others. Marquez is happy, as the final three races are events where he thrives on throwing his bike around the circuit with high levels of adrenaline. His bike is working well though the psychological tactics have been evident since the point’s gap was reduced. You can feel the tension at times in the pre-event press conferences and the look on each other’s faces when it comes down to winning a race. The best part is when Dovi and Marquez push one another from side to side banging bikes and the leathers coated in black carbon dust and sometimes tyre rubber. 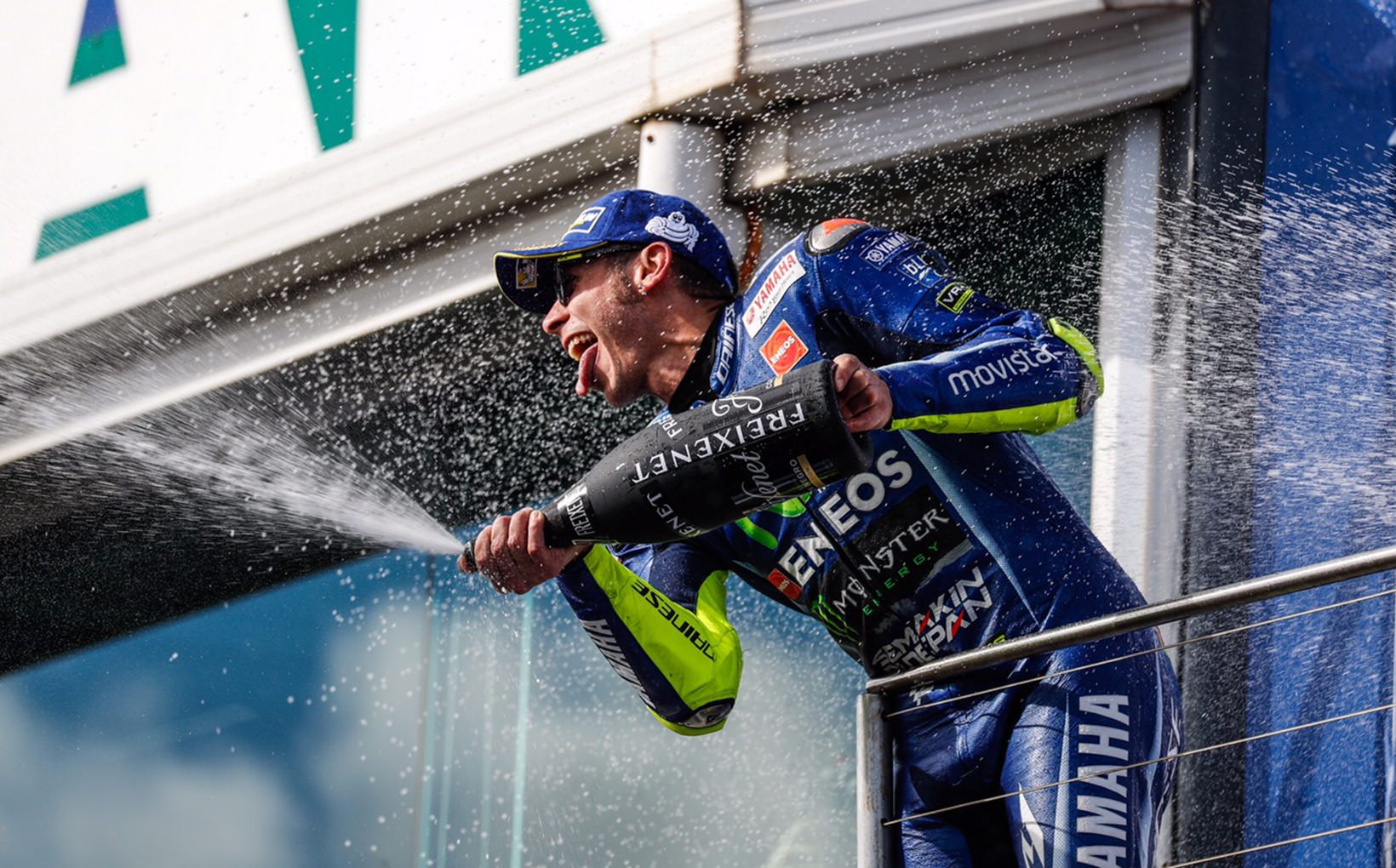 On the other side of the fence is Italian rider Andrea Dovizioso who is passionate about his sport, the team and his legacy that is being built race by race. He was the dark horse at the start of the year and is really putting Marquez to the test. Can he be under immense pressure with the fear of losing out to a fellow rival and still come out the other side victorious? Fans around the world are cheering for DesmoDovi as Ducati looks to win another world title considering the last person to do so was Australian rider Casey Stoner. Dovizioso: “Qualifying was a consequence of the crash. If you look at my pace from practice four, it was quite good. The only rider who went fast with the medium was Marc, Zarco and I. All the other riders with the medium were quite slow. I think we confirm good speed here at Phillip Island. In qualifying, I did not have a perfect feeling to make a good lap time. Phillip Island has a strange characteristic, you have to be so confident and make a lot of speed in the fast corners so if you do not have a really good feeling it is so easy to lose tenths corner by corner. This is what happened to me. With a bad feeling, I did three mistakes on my fastest lap. No excuse. The reality of the race pace is completely different. To start on the back can be a limit. This is what happens. When you have only one lap to do everything it has to be perfect”. 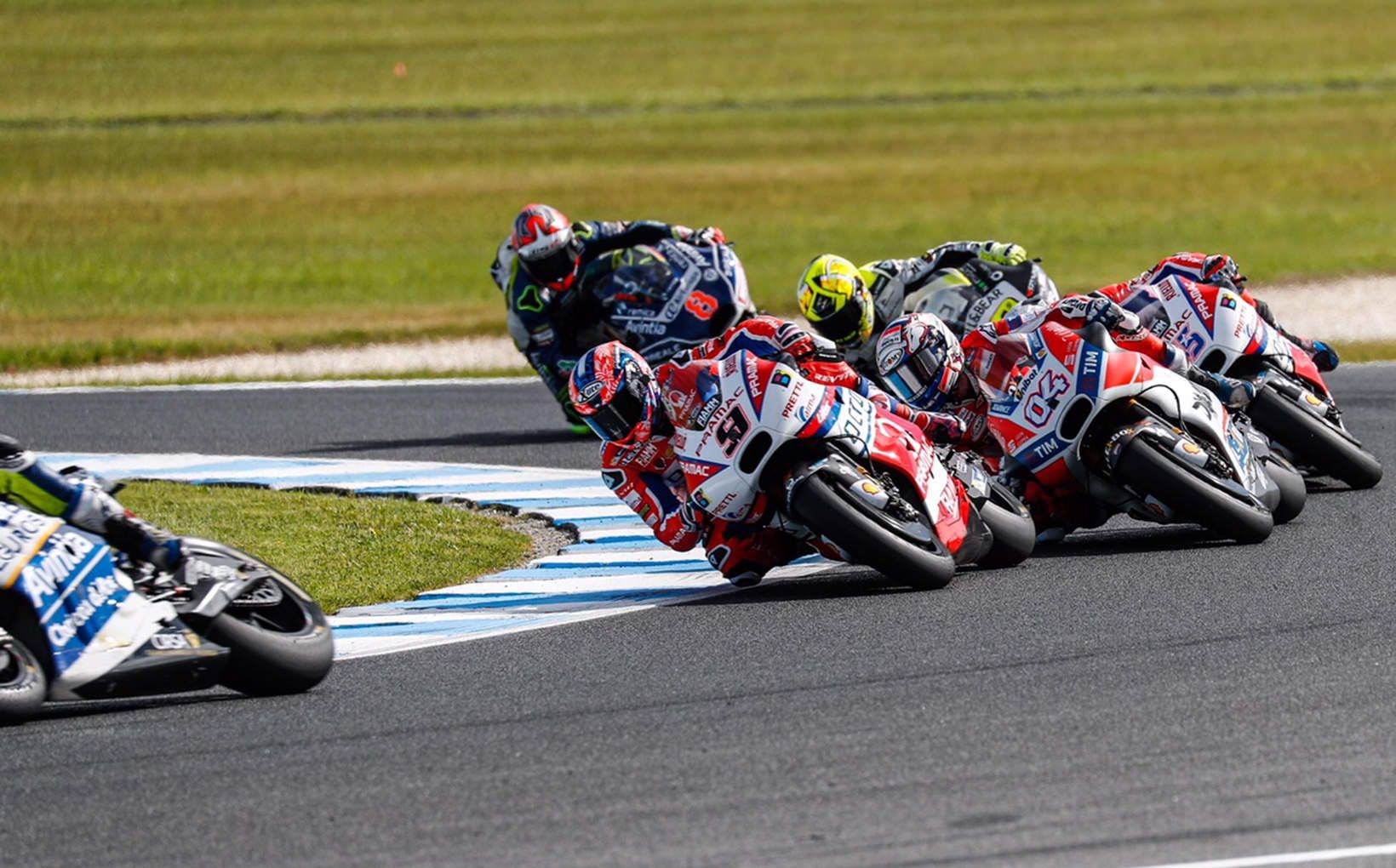 Dovizioso is right in that at this point of the World Championship, he has to be on the limit at all times and making mistakes can be very costly. However, he knows what his bike can do and how important it is to remain calm and to ride smooth. “The front tyre, soft and medium are on the limit. This is why I crashed.” What we learned from Andrea over the course of practice and qualifying is that you have to assess conditions whilst analysing tyre performance continuously. If you have a slight loss of concentration, the momentum can be lost and this can be the difference between the top of the time sheets, the middle and the back of the grid. Dovizioso’s riding style is still exactly the same as it was years ago at Phillip Island. However, as Dovizioso says: “you can be faster and faster because you adapt but Marquez has one riding style, I have one, Jorge has one and it will be forever like this. A good rider adapts to the bike, new rules, tyres and I think I can be quite happy about the speed here in Australia as I have improved a lot compared to last year.” Ducati have worked incredibly hard in 2017 to bring a bike to the grid that allows fans to smile, their riders to fight hard for points, podiums and wins. It really is allowing an amazing battle between manufacturers, countries and riders in 2017.  With that said, the mental mind games of MotoGP are intense. Both Marquez and Dovizioso have been able to master this though Dovi more than anyone this year utilising his rational and irrational sides of his mind. He is a completely different person from previous seasons. “To fight Marquez [on race day] is very difficult but this is a reality. The nice things of our sport are that anything can happen. This is the reality and I can believe that. For sure Marquez has the best pace but we have a good pace to fight. We have to be smooth when I am riding here at this track. This is what I did not ride in qualifying.” 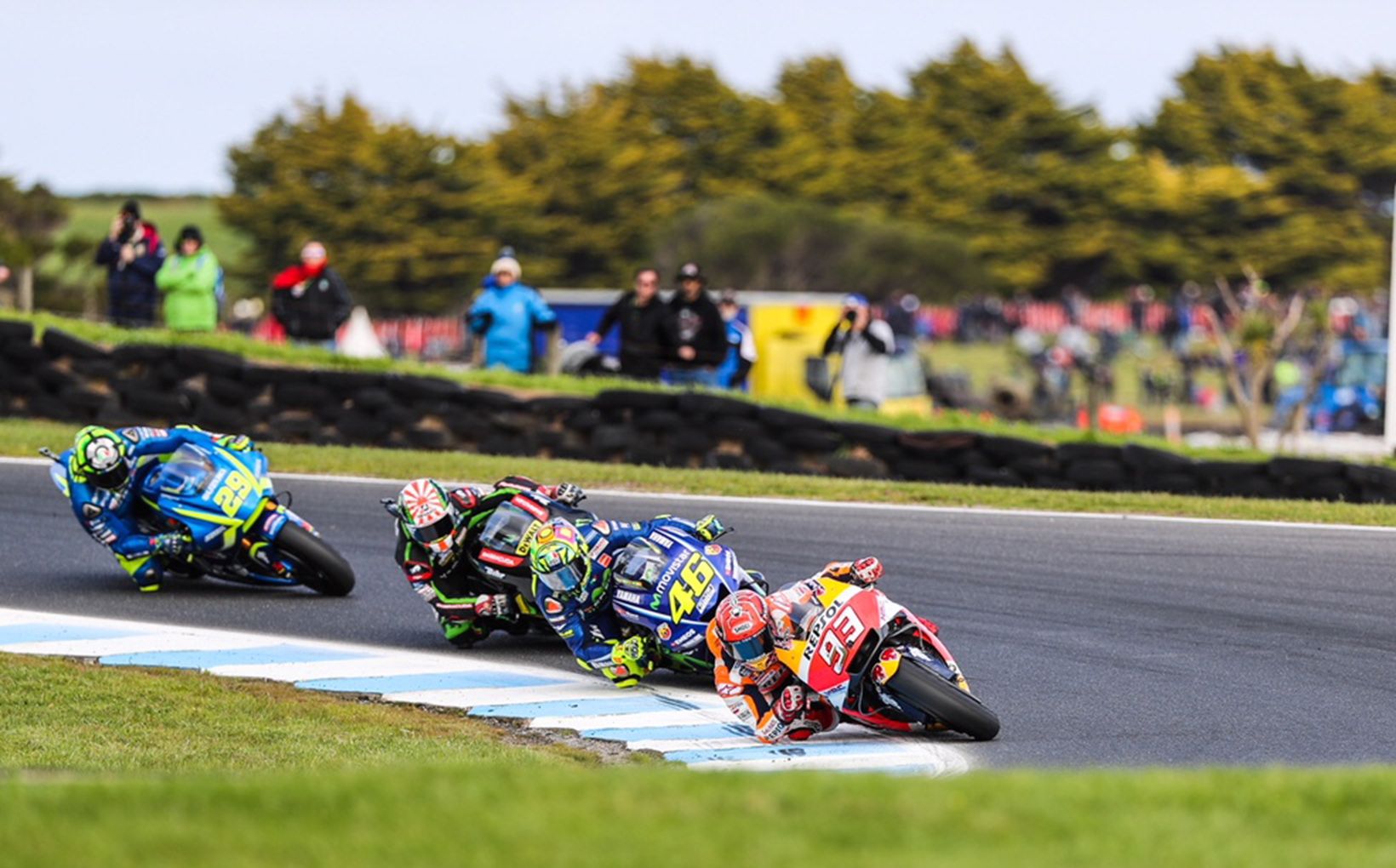 As the lights went out on race day, it was an incredible display of courage and physical force between the riders and especially Marquez, Rossi, Vinales, Zarco and Miller. It was game on between Honda, Yamaha and Ducati with the Repsol Honda of Marc Marquez on top after taking a new approach to the Phillip Island circuit. We had Zarco almost collect Marquez; we had Iannone chasing hard and wheel-to-wheel action that ended with Michelin tyres on Marquez and Rossi’s leathers. It was a truly extraordinary race for Marquez who has matured over the past couple of races whereas a disaster for Dovizioso. The gap is now thirty-three points and you can only imagine how DesmoDovi feels after not being able to run the pace out the front with the rest of the top five. Ducati did not achieve their goals here at Phillip Island and rather will need to reset for Malaysia. 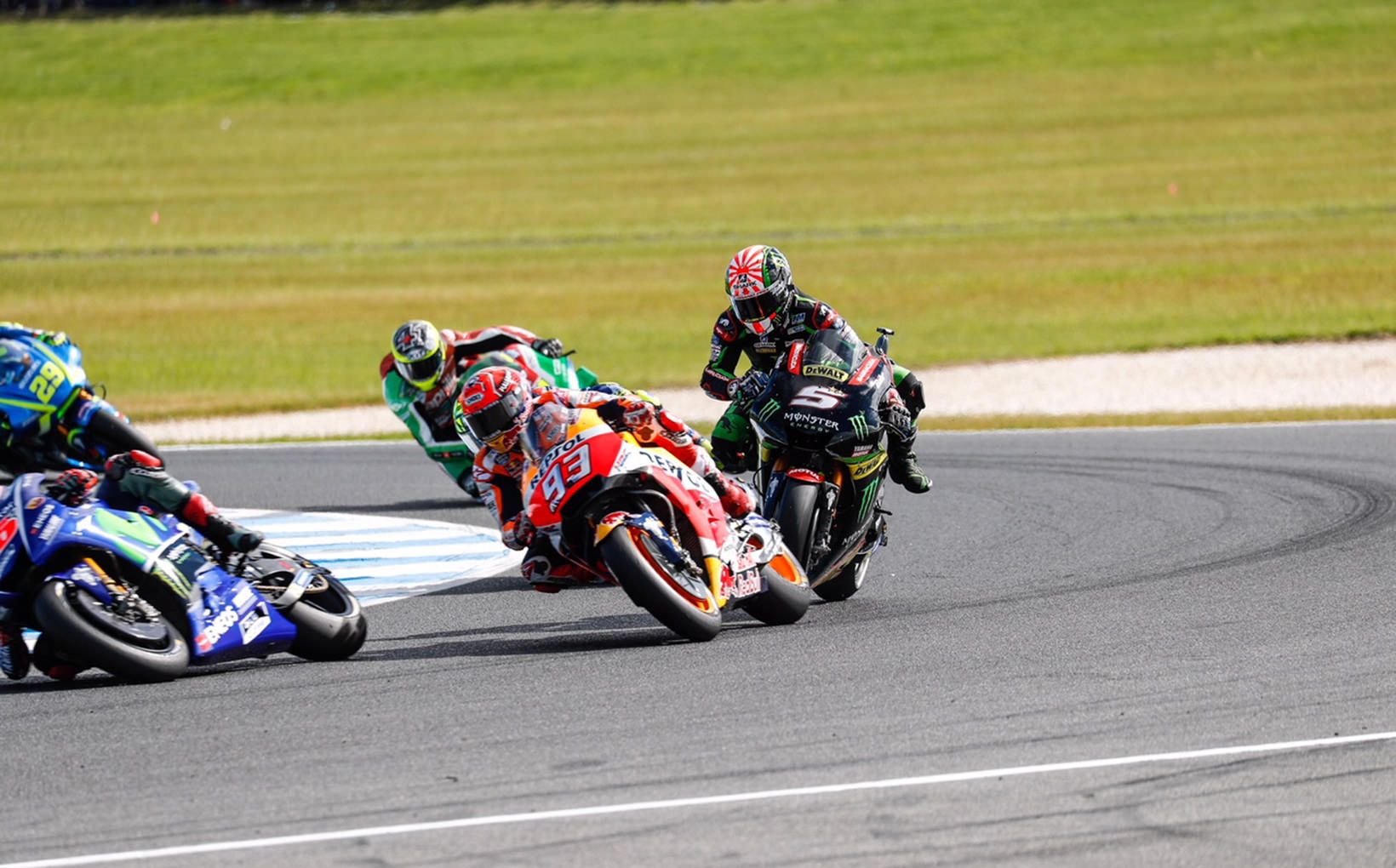 Marquez puts its beautifully “Honestly it was an amazing race, from the beginning I went and was quiet and tried to warm the tyres well, to be calm but suddenly on the second or third lap there was first contact from Johann. I start to realise we will see during the race but this will be tough. It was a big group like Moto3 and I enjoyed it a lot. I did realise in the middle of the race that I need to attack or they will overtake me everywhere. It was a little bit dangerous sometimes but in the end I attack a lot especially in the middle of the race where I was trying to control Dovi, to analyse everything and with eight or nine laps I said ok it is time to attack, to open a gap and I was able to be faster to open a small gap which makes my life easier on the last two laps. I was aggressive, they were aggressive to me and I was playing the same card as them. I was trying to take care for the Championship because one crash or zero points would be a disaster. Before the race I knew that it was an important race to open the distance and honestly the victory, I am happy, though I am happier with thirty-three points. It makes me smile more. Before the race, the team asked me if I wanted any communication as to if I want to know where was Dovi but I say no. I say I don’t care but in the middle of the race there was a question mark. I said to myself where is Dovi, looking behind and trying to control him. I saw him from turn four and he was on turn three and then I was trying to control him.” 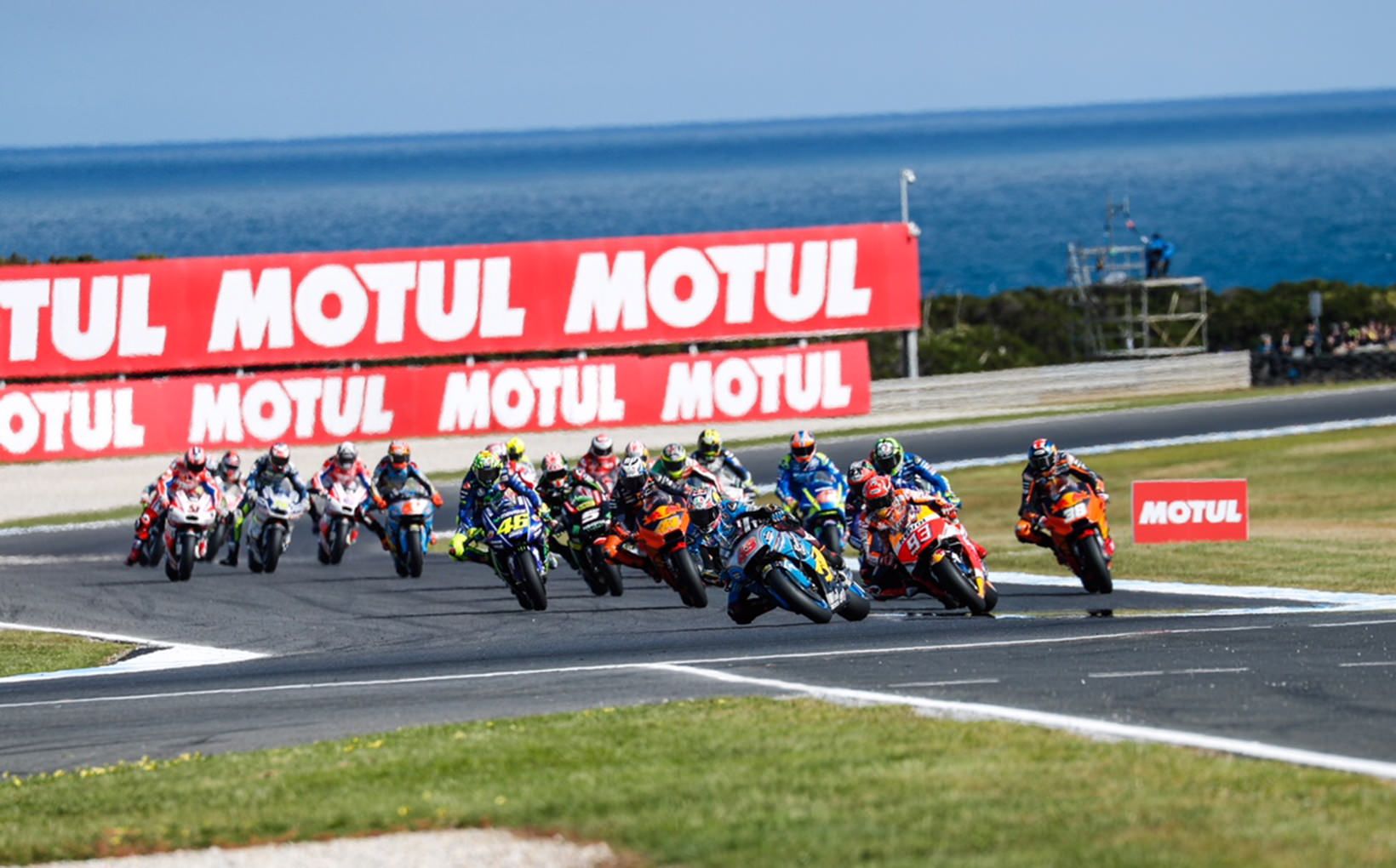 Dovizioso on the other hand, had a hard race and was not able to get any closer to the front-runners and the mental battle begins again to recover points in Malaysia and Valencia. As we know, this sport has ups and downs. Today was not a good day in the office for Dovizioso or teammate Lorenzo but next race, anything can happen. 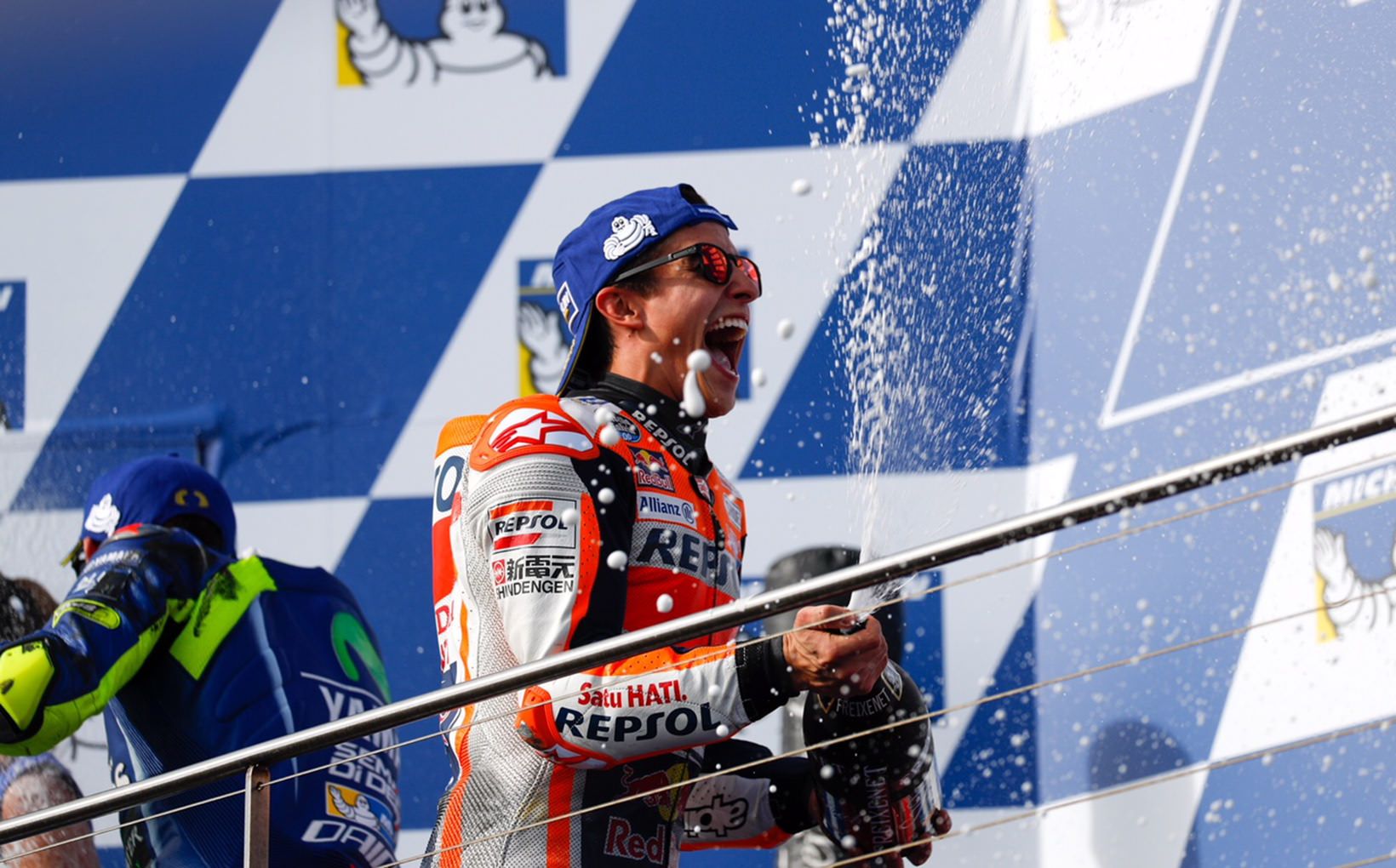 Marquez “I took risks in part of the race today. Honestly, today is to enjoy the victory and tomorrow we start to think about Malaysia but now with that advantage, it is big but not enough. You need to be patient like a bit like 2016. I take a lot of risks in the season and the tests and free practice. Now we need to approach in a different way the next races and we know that Malaysia was a difficult circuit in the pre-season but now it is a completely different bike so we will see there but try to give our maximum during practice and then in the race control ourselves.” There you have it, the way of the Spanish Ant and his Repsol Honda team. It looks like a fourth MotoGP title is more than a possibility for Marquez! 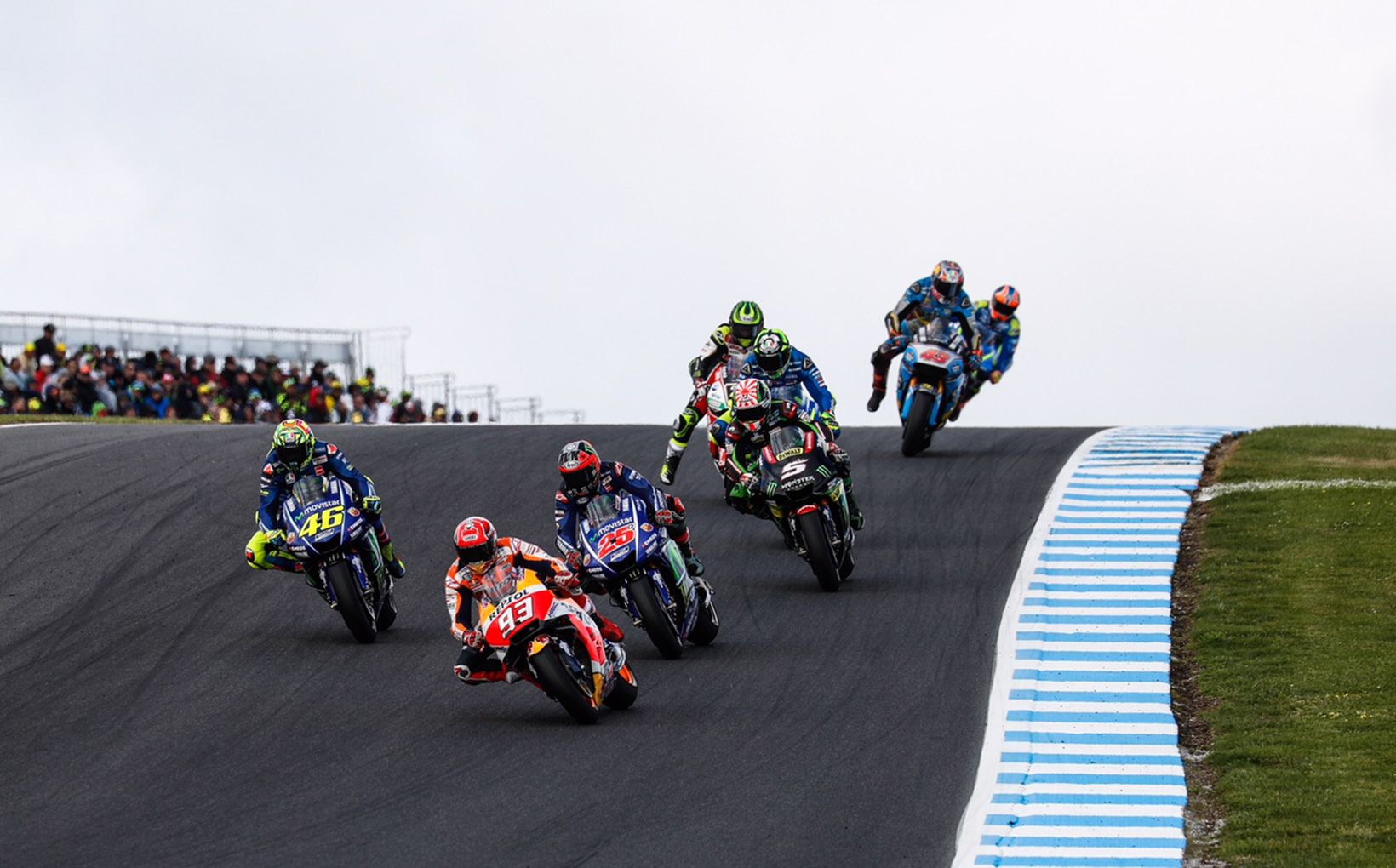