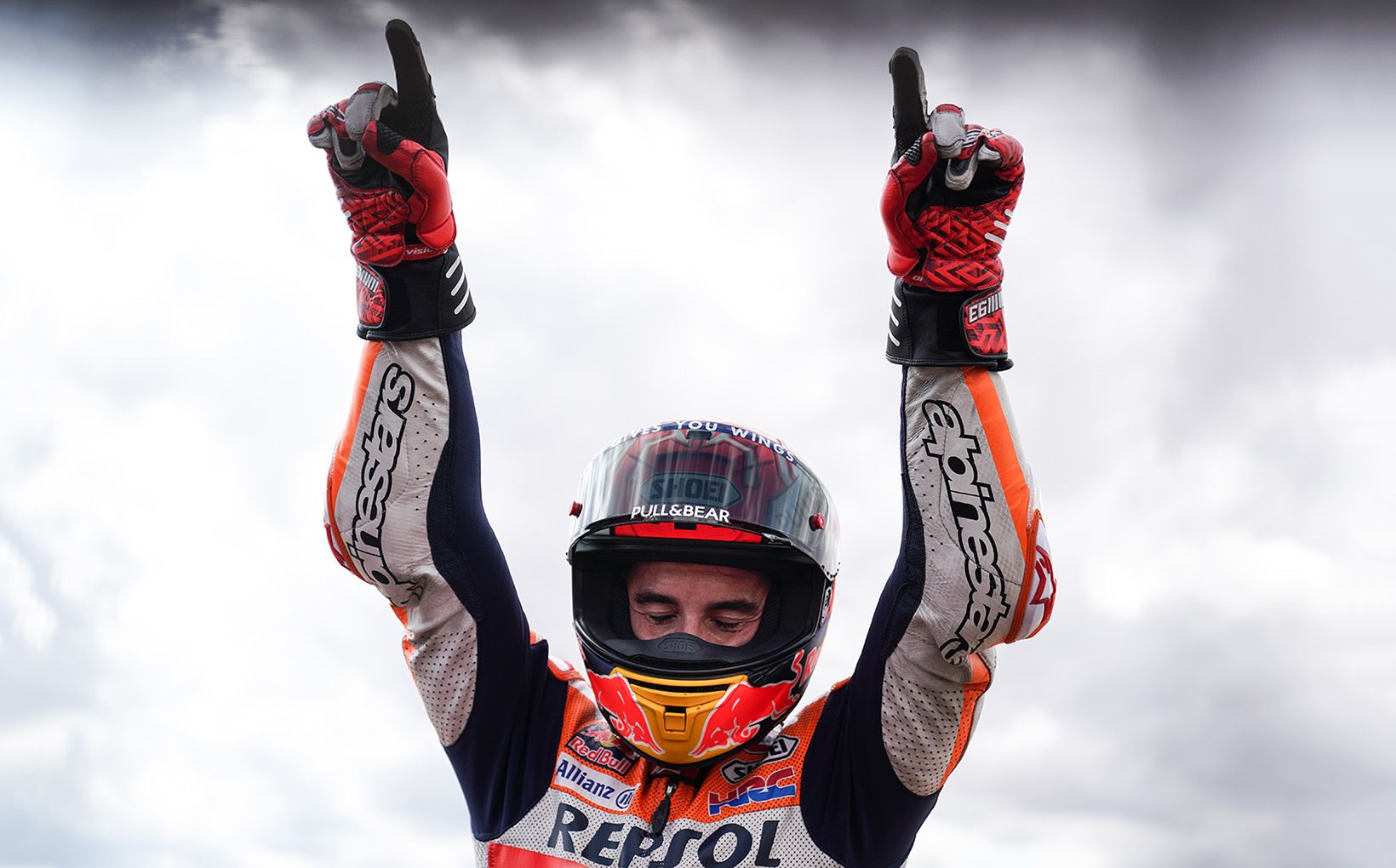 Marc Marquez has reeled in victory at MotorLand, Aragon, claiming another sophisticated win ahead of his rivals and cementing his title race for 2019. The Marquez factor is unbelievable and no one is close to even pushing the Spaniard to the limit. There is no doubt in our minds that Marquez could have extended his lead even further to make an impact at Aragon, although to risk crashing would be a silly option so taking the victory in the way he did was smart, calculated and as the story finish was anticipated before it even took place. 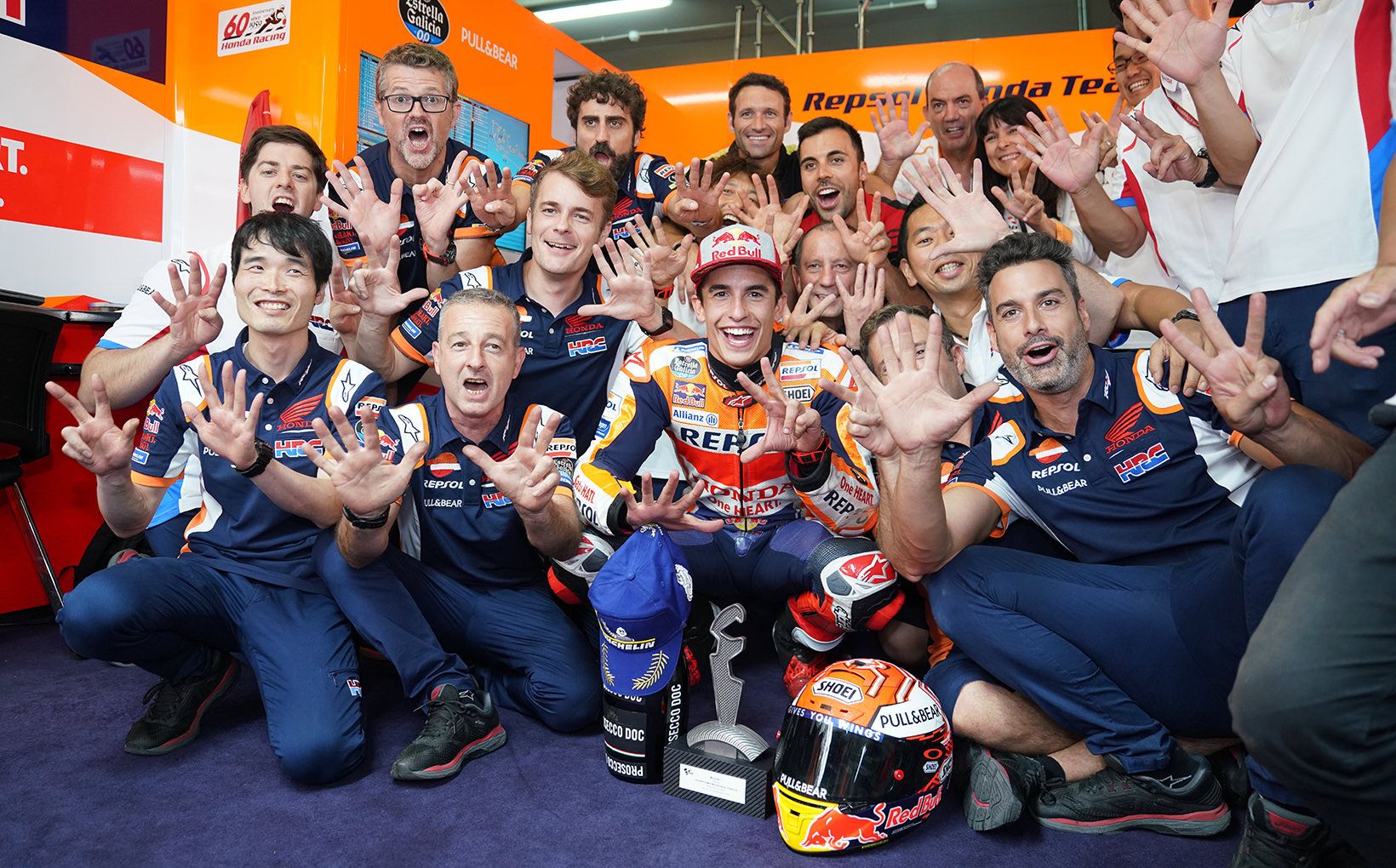 MM93: “I was convinced about my strategy and what I had to do. I had a good feeling from when I left the box, so I knew I could push in the beginning and open a gap of four or five seconds and just keep it there, not pushing too much. I saw at one stage of the race that Viñales closed in a little, so I pushed a little more for two or three laps and I stabilised the advantage. It looked easy but it wasn’t, we have been working hard all weekend to find the limit. It was amazing to win here in front of our home fans so I have to say thank you to them all!” 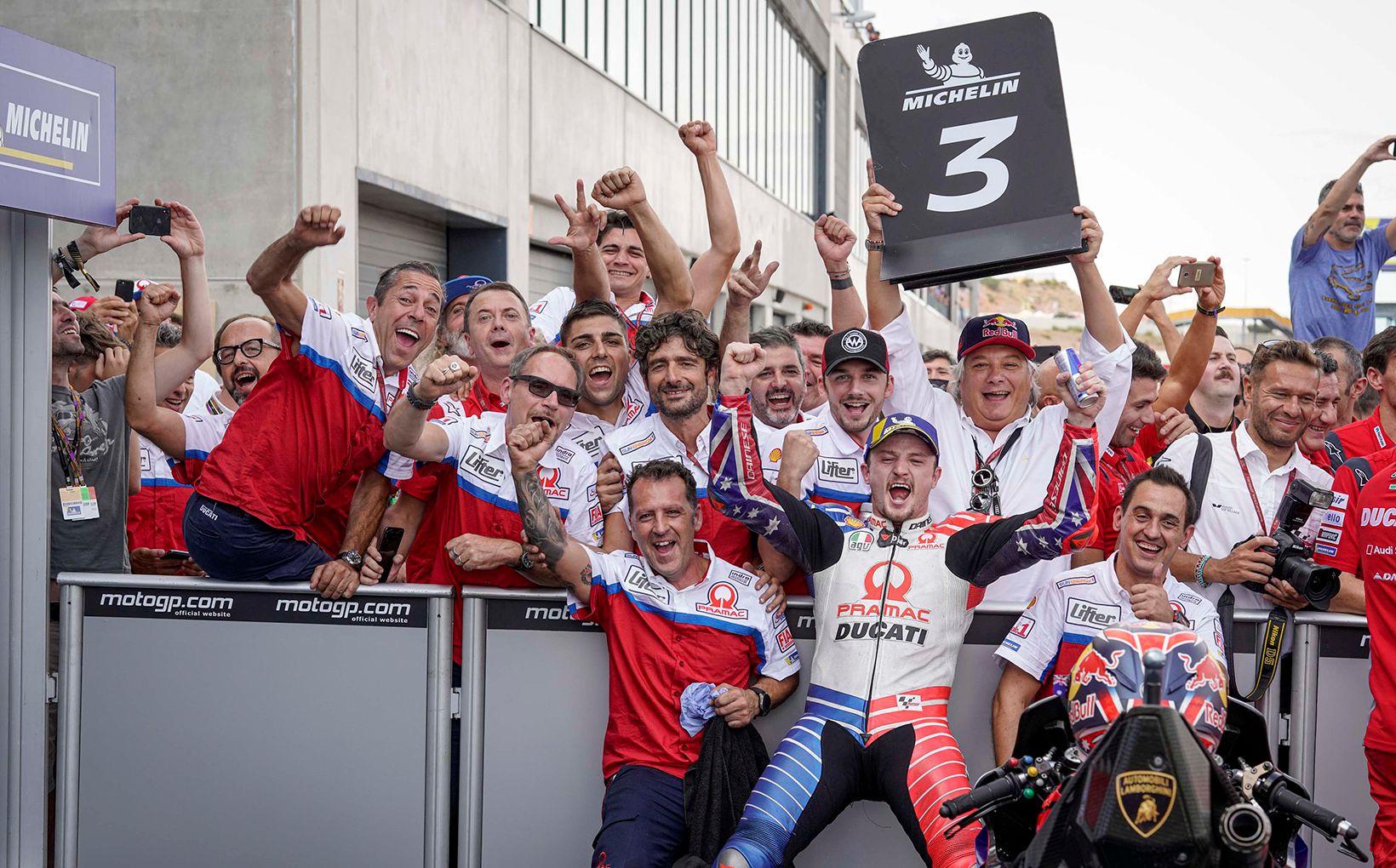 Aragon was a very successful race for Australian rider Jack Miller. The Pramac Ducati MotoGP rider knew that he was going to lack pace and performance in comparison to Marquez and as a result decided to think before pushing. As a result, Miller took third place and enjoyed the success of being on the podium rather than risking everything for a low percentage chance of winning. This mature decision by the Australian is a demonstration of where he has grown and become a more intelligent rider. We are very proud of his third place finish in Aragon as there is much more to come from the “Jackass”.

JM43: “It was a great race. I tried to stay close to Marquez in the early laps, then I had fun fighting with Quartararo, Dovizioso and Vinales. This is an important result for the team and for Ducati and I thank them for the extraordinary work they’ve done not only this weekend but since the beginning of the season.” 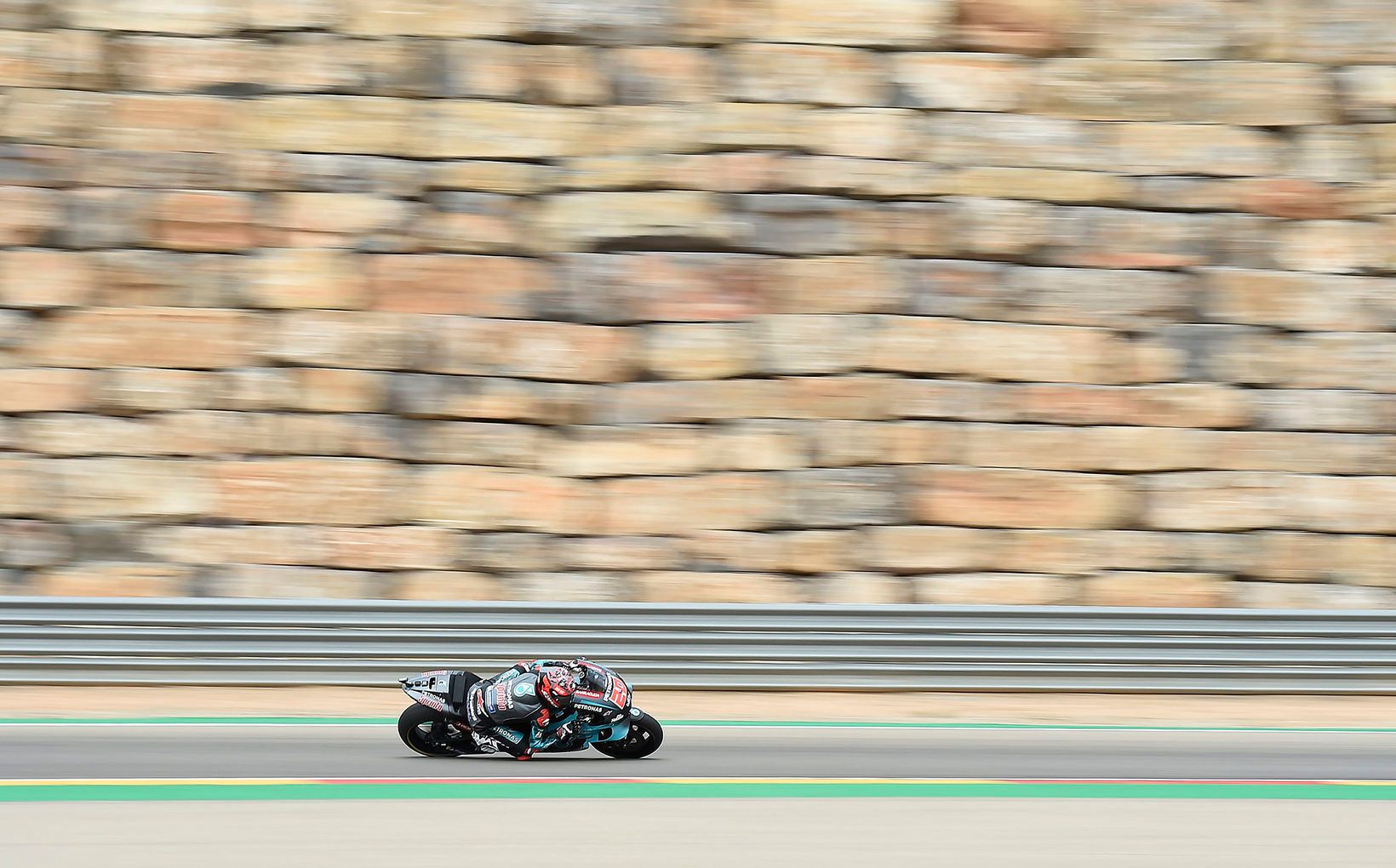 On the other hand, it was a very up and down day for the Yamaha factory riders and independent satellite team Petronas Yamaha Sepang Racing Team. Fabio Quartararo fought hard to finish fifth whilst Maverick Vinales finished fourth and Valentino Rossi eighth. There was not much either rider could do to catch Miller, Andrea Dovizioso who finished second or the Spanish Ant who finished +4.836s ahead of DesmoDovi.

FB20: “Overall we did a really good job at Aragon and I’m pleased with the result because the goal was to finish inside the top five. We were just missing a little bit of grip in the left corners, and we need to analyse the data and see what happened. Our pace was good at the end but just not quite good enough to stay with the guys in front; I gave my 100% to try but I couldn’t manage it. We’re fighting for the top independent rider with Jack [Miller] and it’ll be good to carry that battle on through the overseas races. I’m looking forward to arriving in Thailand because it’s a track that I like even though it’s going to take hard work to be competitive there.” Rear tyre degradation definitely caused havoc for the factory Yamaha bikes. This has been something the team has struggled with in the past. There is still so much work to do for this manufacturer in order to be competitive. Right now, even though their pace is faster than last year, it is still not good enough to be fighting fit. 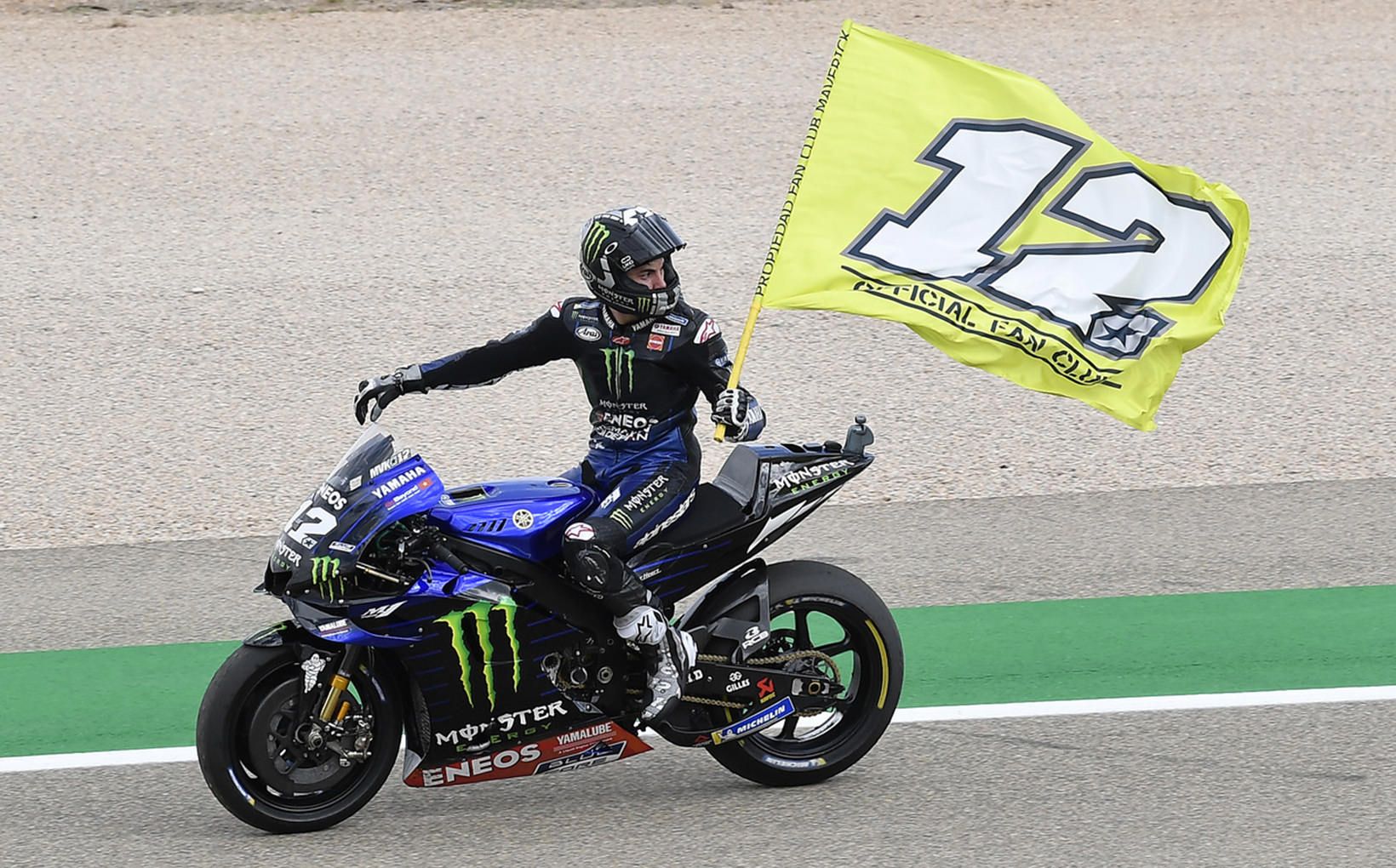 MV12: “I knew second place was possible today, so I pushed and pushed and pushed, but finally, in the last two laps, the tyre was very much on the limit. I tried my best. I nearly crashed two or three times because of the rear and thought ‘OK, today I have to be fourth, that’s the maximum’. I’m actually happy that I was very strong in the middle of the race. At the end I didn’t have enough grip on the tyres to keep going, but I’m once again the first Yamaha, which is important to us. I tried to close the door everywhere to Dovi, but in the end it was impossible, on the straight I stood no chance.”

In following on from Vinales, in analysing Rossi’s performance you can tell how much the Doctor is struggling and wanting to improve. He is working around the clock to help the team progress the bike, though the process is taking a very long time. This is not an ideal situation to be in when you are nine times World Champion who is used to winning or at least fighting for the top positions. We feel for Rossi who we know can be strong and at majority of the circuits on the map. 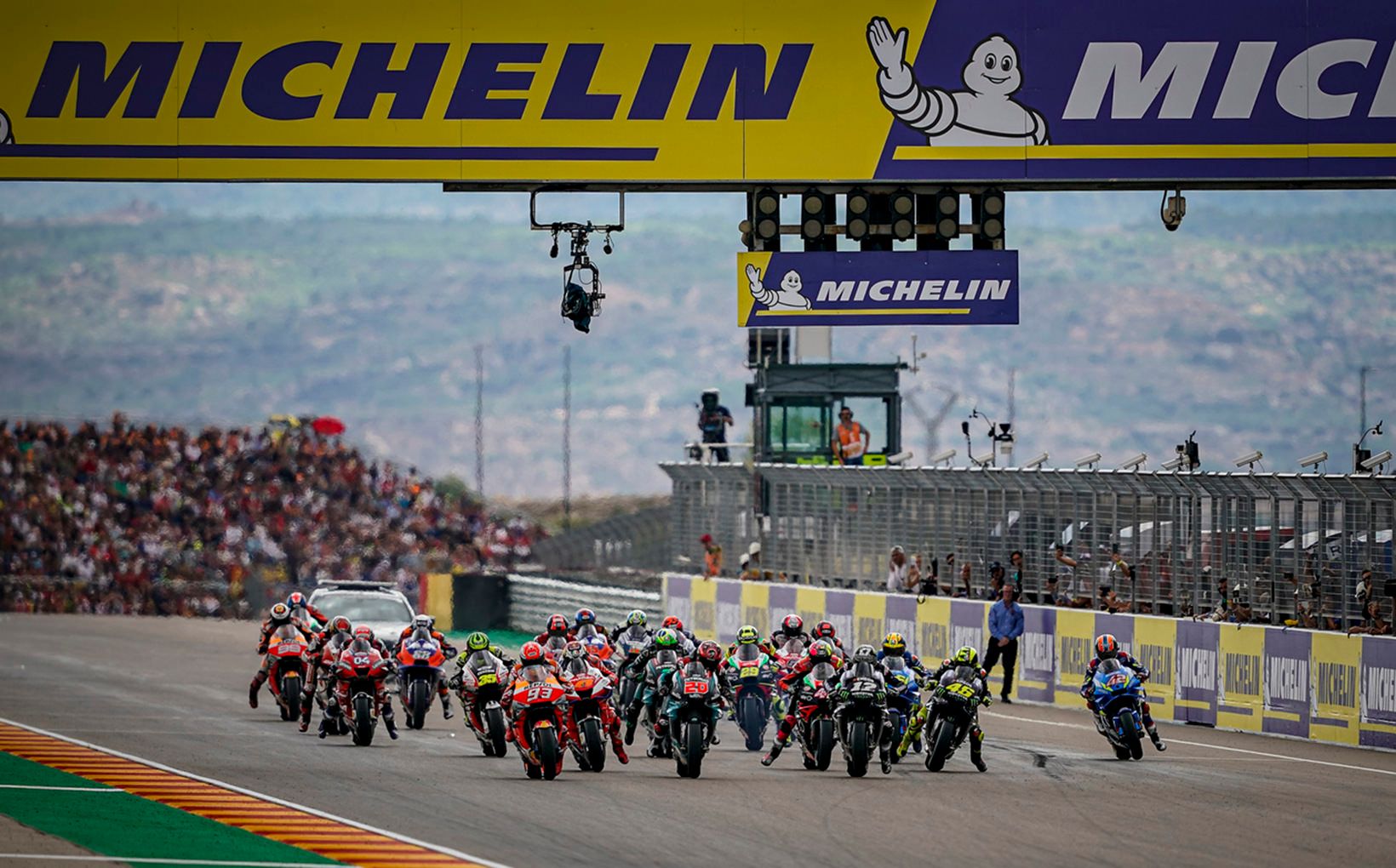 VR46: “I didn’t have grip and I had some kind of problem with the tyres, it happened a little like it did in Silverstone. To me, it’s not a problem of the tyres, it’s our problem. We always struggle with the grip on the rear, and because of this lack of grip we also damage the tyre more, so in the end it was a very difficult race. It looks like everybody on the hard rear tyre had some problems, also the other Yamahas, but more towards the end. I started having problems earlier on. But I don’t know if we could have done better on the soft, because during the practice the soft wasn’t very good for our bike.” 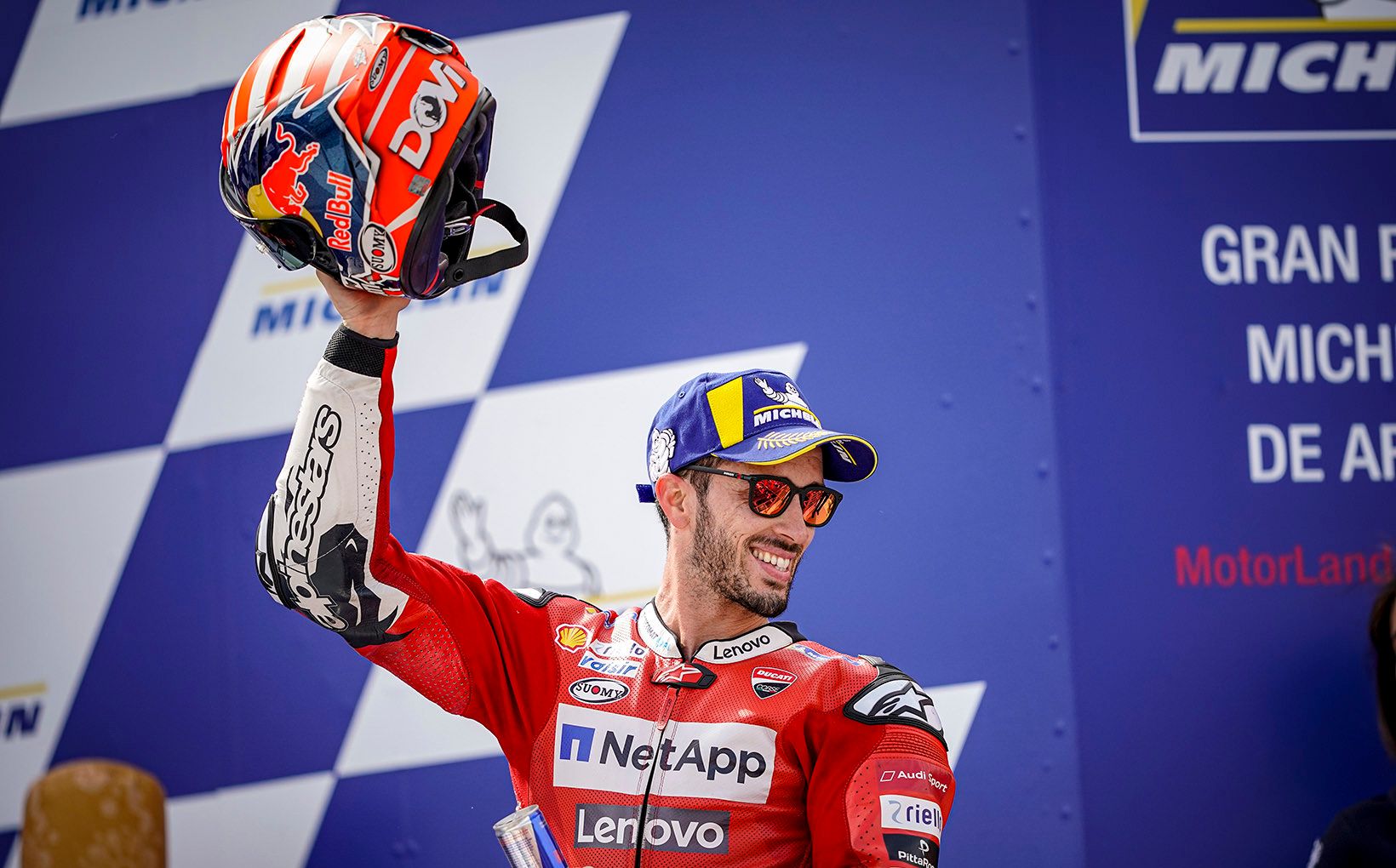 Positive momentum is everything in this sport and Andrea Dovizioso is feeling much more at ease after finishing second at the MotorLand Aragon event. He rode well though was not able to keep up with the pace of Marquez. If anything, he did a fabulous job chasing down Vinales and Miller to fight with them and also take some important Championship points in order to keep the title alive, regardless of where Marquez will complete his duties: whether it be Thailand or at Japan if things go to plan. 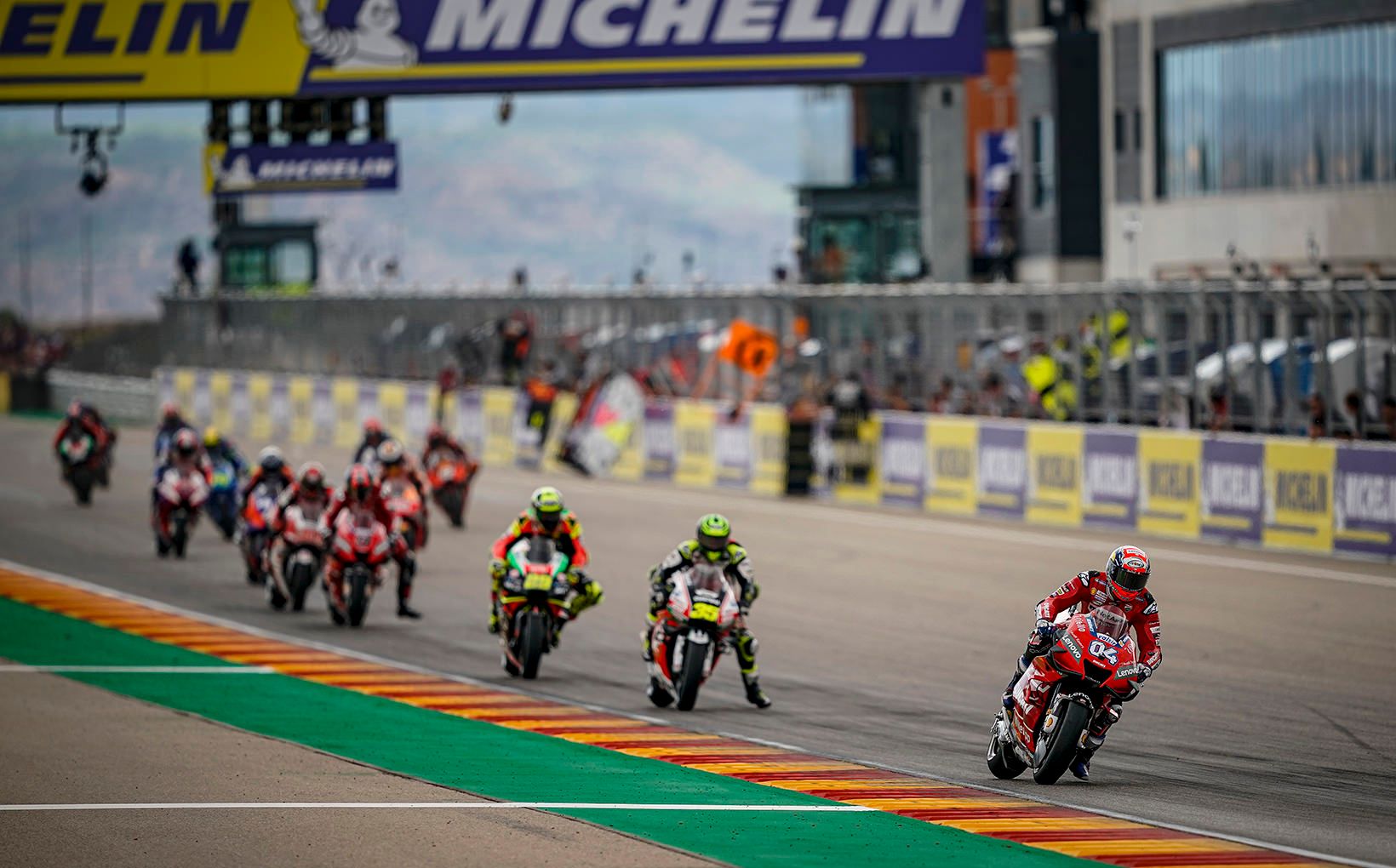 AD04: “It was very important to get back onto the podium after the races at Silverstone and Misano, and so today I’m very happy, especially because of the way in which we were able to get this second place. I started tenth from the fourth row because of a mistake I made in qualifying yesterday, but I knew I had a good pace and on the grid we made the right choice of tyres, going for the soft rear. In the race I was constant right until the very end, I saved my tyres and managed to gain place after place until I could pass Jack and Maverick to finish the GP in second place”. 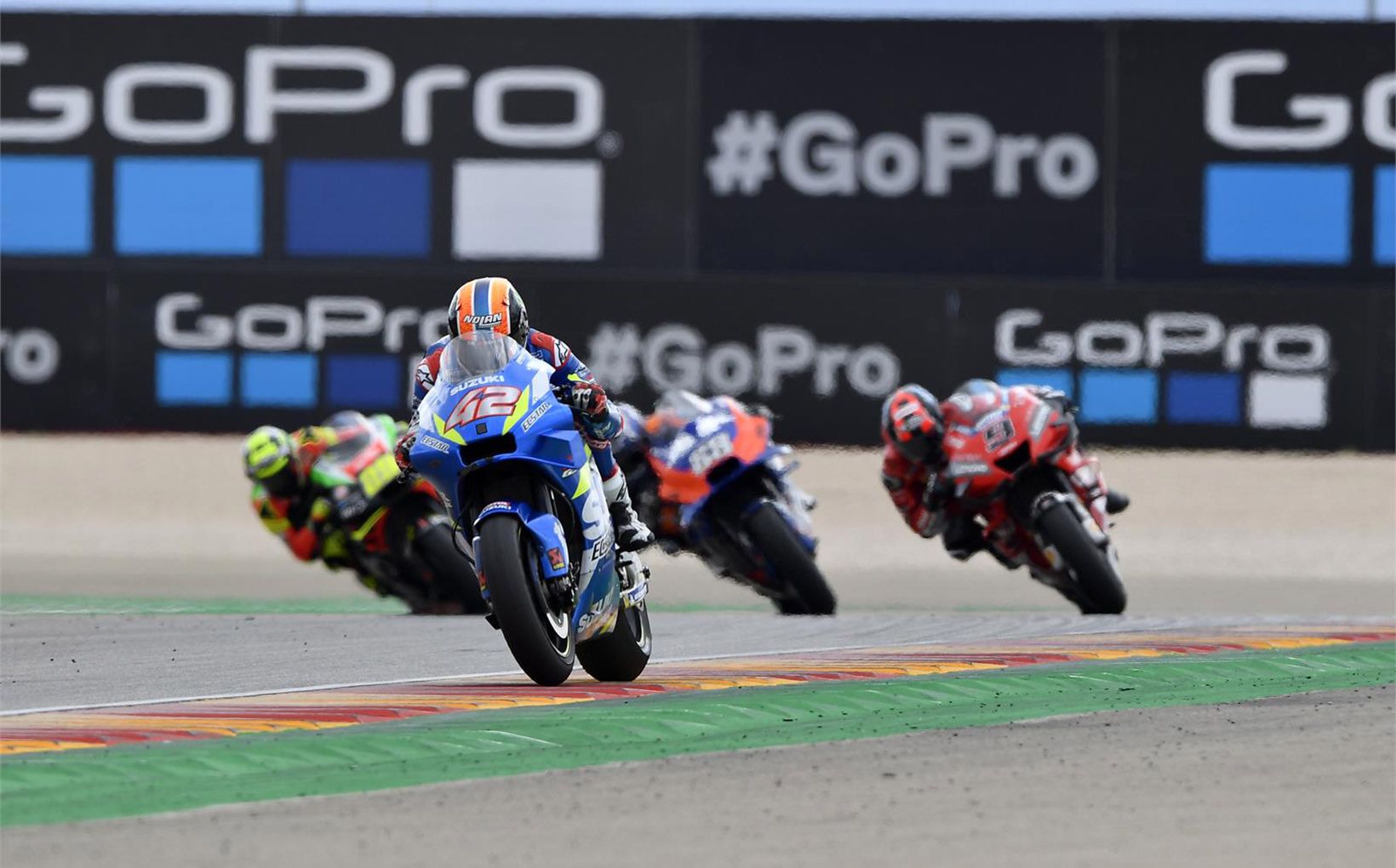 As a takeaway, Cal Crutchlow is feeling a renewed sense of positive energy after finishing sixth, Jorge Lorenzo had an amazing start though dropped off midway through and struggled to finish strong and Alex Rins once again had to go through damage limitation after colliding with Franco Morbidelli on lap one. The Spanish Team Suzuki Ecstar rider had to endure a long lap penalty though finished ninth which is quite good considering how worse of he could have been with another DNF next to his name. 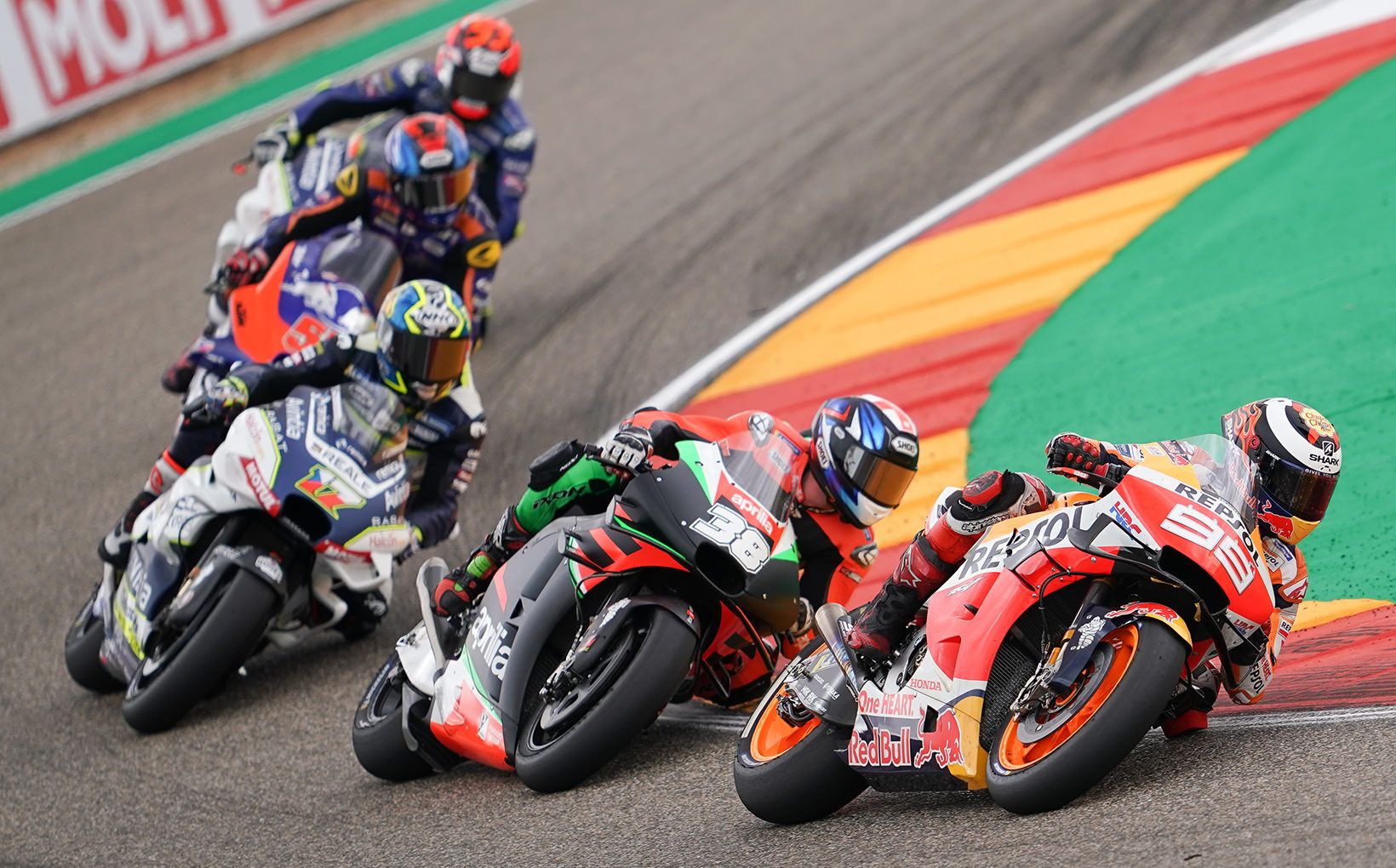 Some final comments from the riders:

JL99: “At the start of the race I was very hopeful of a good result as I made a very strong start and I was quite competitive in the opening laps. Unfortunately I felt a lot of drop on the rear tyre and I struggled for rear grip from early in the race. I tried to manage it by being as smooth as possible, but I dropped back little by little. It’s a pity, I would have rather started the race poorly and finished strong. But still we can take positives as we have learned more about the setting and I was pleased with how some sessions went this weekend. Congratulations to Marc and the Repsol Honda Team for a great win.” 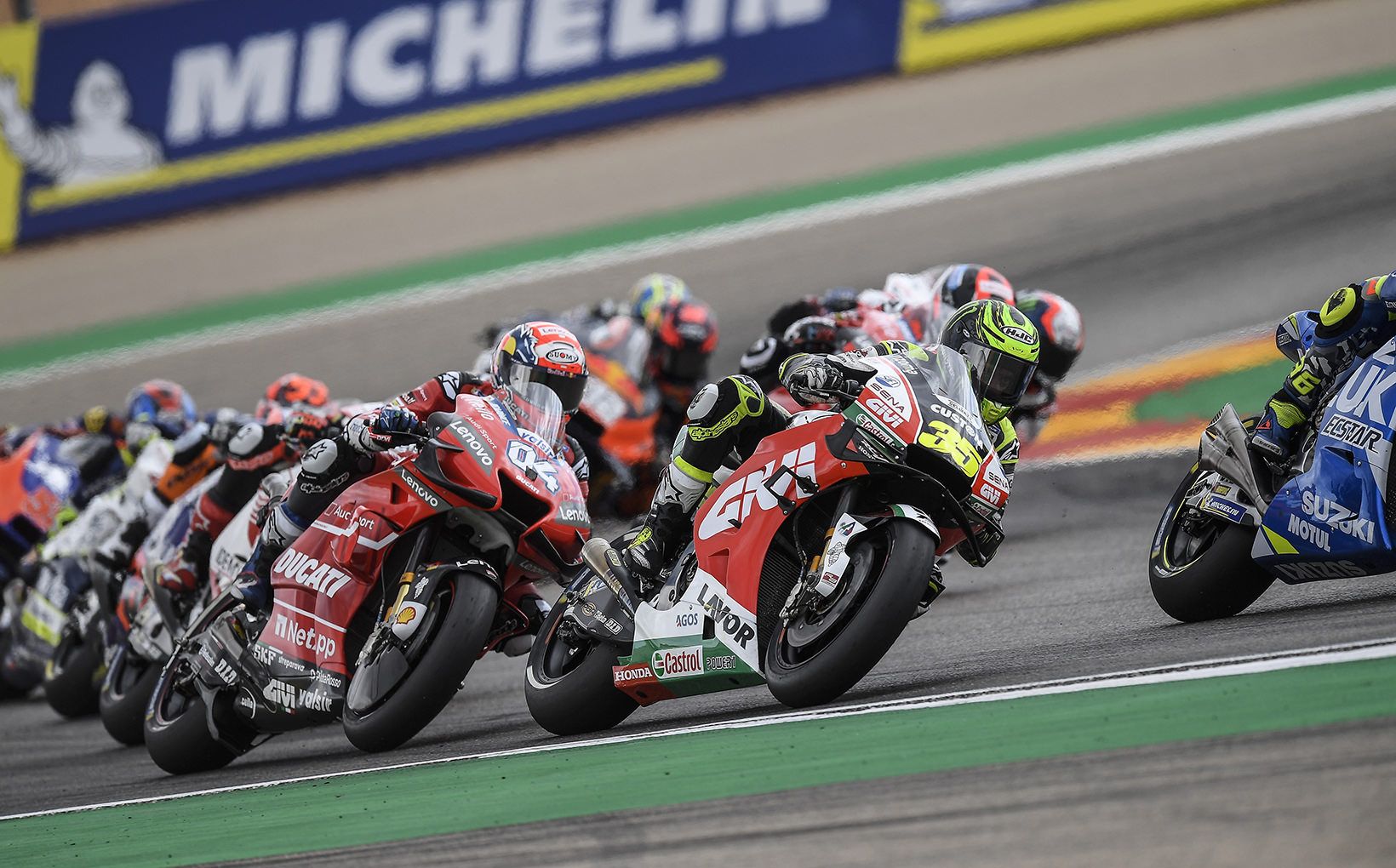 CC35: “I’m happy with that, I think today was a race we had to finish after last week’s disaster, so to come here and get a good result in Aragon, we’re happy with that. I just lost too much time, I got caught in some stupid battles on the first lap and then in the middle of the race I also ran off the track and lost another couple of seconds. I’m pleased with my pace overall, we didn’t think the race was going to be as fast as that for a start and we also held our pace throughout the race pretty well. I was able to make some good passes and get a top-six here in Aragon.” Next up is Thailand, where it will be hot and memories of some crashes in 2018, hard to forget. It will be interesting to see if Marquez pushes in order to enjoy a World Championship celebration and to arrive in Japan feeling no pressure and enjoy racing with a clearer sense of fun and enjoyment.