The 2018 French Grand Prix has concluded and what a sight it was for fans across the globe with Marc Marquez winning his third straight MotoGP race, equalling Casey Stoner’s 38 premier class wins and hot title contenders crashing out! It was a race to remember as riders battled for track position and where mistakes led to unfortunate circumstances: Andrea Dovizioso crashing out after leading the race, Andrea Iannone barely making a lap when he ended up in the kitty litter and home town hero Johann Zarco crashing which broke the hearts of the fans at the circuit. You could feel and hear the disappointment when Zarco went down and was not able to re-join the race. It was clear this weekend that certain riders were rushing and making monumental errors. In the sport of MotoGP, if you make one slight mistake it can be the determining factor on how you will finish up in the World Championship race. For example, DesmoDovi went from leading the Championship two races ago to now being 9th after failing to finish at Le Mans. Dovi: “I’m really gutted, this time it was only my mistake. I went a bit wide at Turn 6, I didn’t think I had any problems with the front turning in but it did. It’s a real pity because today I had good sensations and a chance of fighting for the win, I think quite easily, and it is an unacceptable error for someone like myself who wants to fight for the title.” 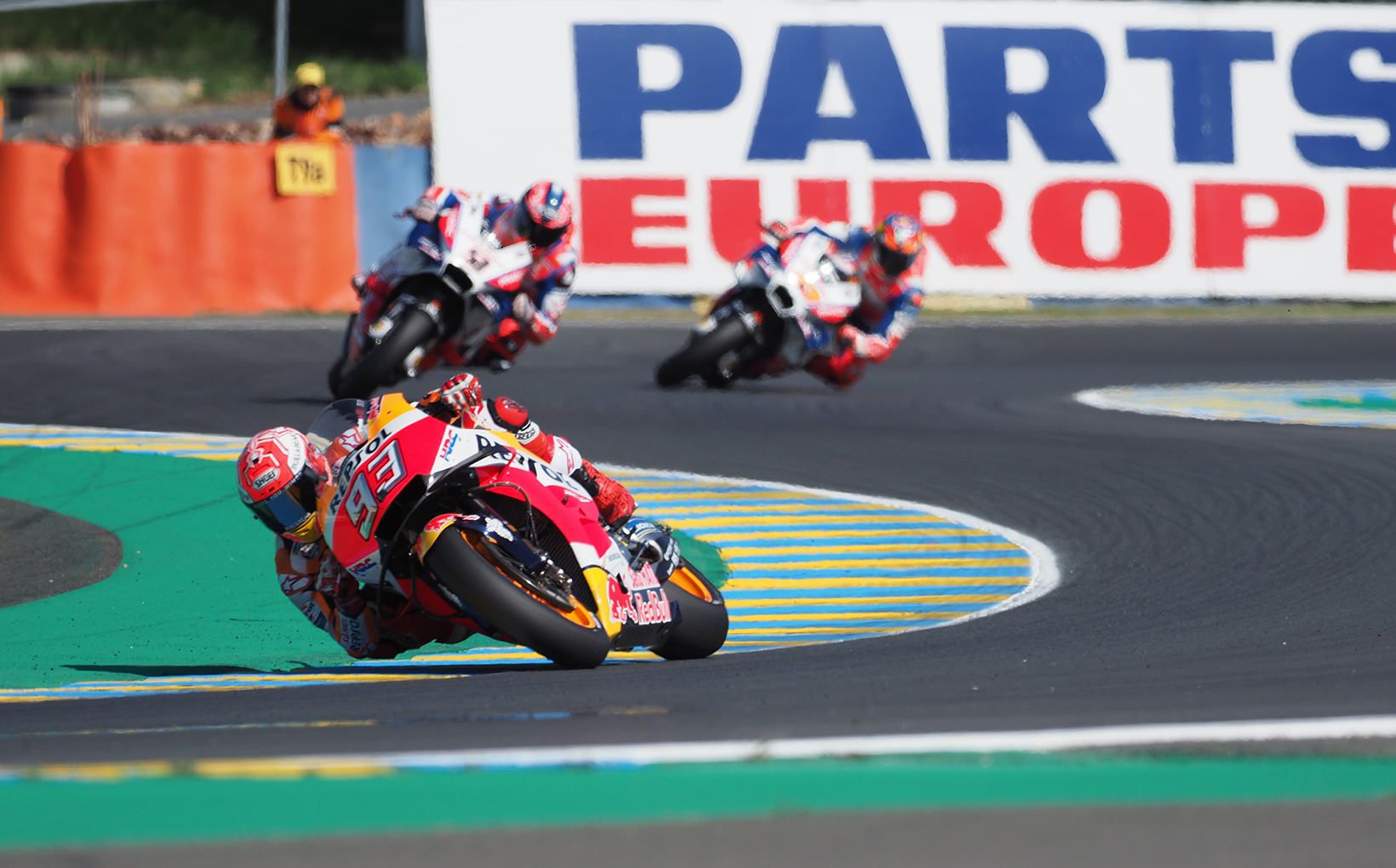 If we look and assess Marquez, he is riding perfectly and you cannot fault his riding style, focus and determination at this present moment. He had a rough start to the year, was subject to serious criticism and considered one of the most aggressive riders in the top class of MotoGP. Rossi even made mention that he was scared of Marquez on track and we are sure that this was a tactical suggestion to try and throw the Spaniard off his game. With that said, Marquez has switched up his tactics and decided to race with care, precision and with intelligence. During the event, he was able to remain focused even when chaos was taking place around him. The ability to be so far ahead in the Championship with so few races completed is a testament to his character and a reason why he is chasing records to rewrite. When you look at Marquez, you see someone that is one of a kind, a rider that is changing how a motorcycle is raced and a team player that wants to enjoy the success with his crew. Sitting on cloud nine is one way to describe the feelings expressed by the Respol Honda Team. They are working around the clock and incredibly hard to achieve greatness. 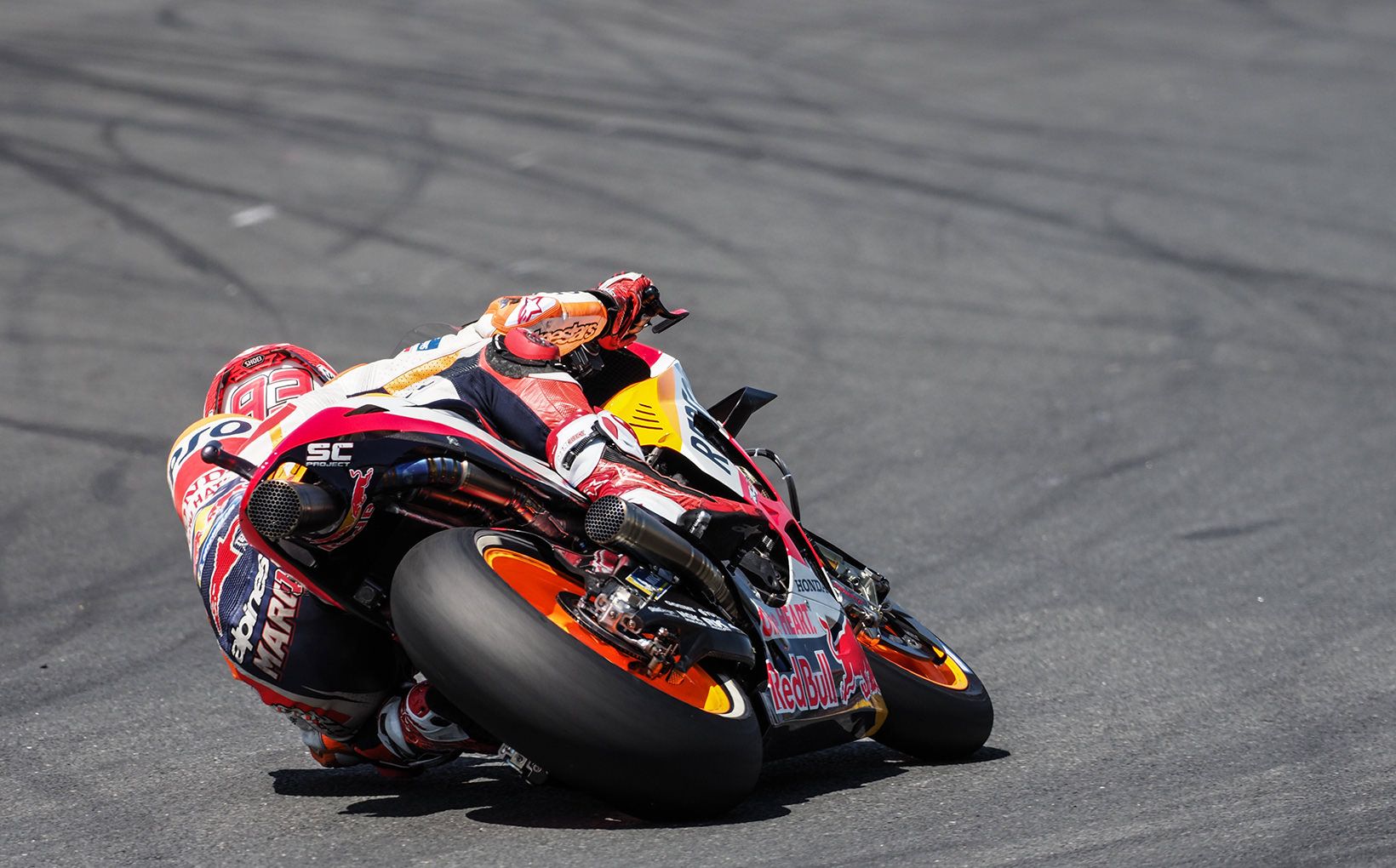 Marquez as a result now equals Casey Stoner’s 38 premier class wins and also surpasses Mike Hailwood’s win record. It was a fairy-tale finish and a dream race where the Honda rider usually encounters problems. Right now, the preseason testing and work by his team is paying off in multiple ways: success, points, money, growth and fun. Marquez: “I’m particularly happy with this win here in Le Mans, as it’s one of the most difficult tracks for us! To be honest, things were a bit challenging at the beginning of the race: Zarco touched me in the second corner and I went a bit wide, then Iannone crashed and nearly hit me, so I lost some more positions. I decided to cool down for a while. When I saw that Dovi and Johann were out, my approach to the race again changed a bit. At a certain point, I had one big moment in turn three, where I had already crashed in FP3, which is why I was being extremely careful there; I think that helped me to avoid a crash in that moment. I’m currently experiencing a very ‘sweet’ period with my bike, and when you’ve got that kind of feeling, you also work better; then you ride better, and the bike works better.”

The fact that Marquez can do what he does and save a crash with is elbow is really showcasing the limits of the sport and also causing other riders to question how to beat him. In this sport, the psychological aspect is a major factor in whether you perform or not. “How does he do it?” is just one of the questions journalists, teams, commentators and fans are asking! Certain riders are trying to utilise their mental strength as a way of beating their rivals and Marquez is putting this on display for everyone to see just by riding in the way he does. How do you beat someone that is almost unbeatable during a race? When you go faster, he goes even faster, when you crash, he saves himself from crashing, when you fall and walk away, he falls and gets back up straight away. These are just a few characteristics of MM93. 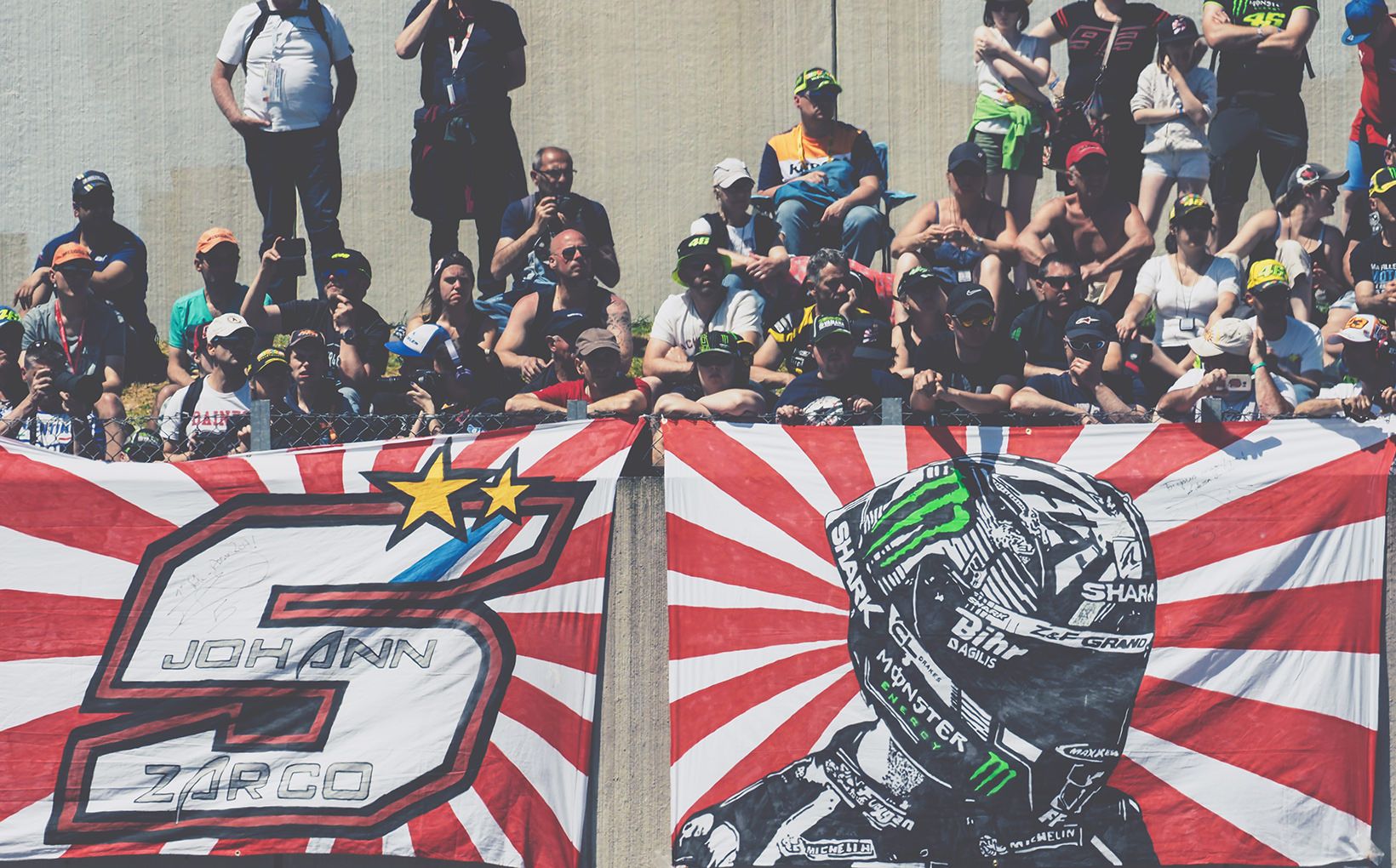 In terms of the French Grand Prix, the fans were exceptional with their colours, merchandise, beer drinking and celebrations for Zarco, Rossi, Petrucci and although booing was evident with Marquez, people still cheered for the Spanish rider. The elation of Zarco having a chance at winning was superb for the sport of MotoGP. His qualifying lap was special and Marquez was not able to replicate the speed and calculation of Zarco. The lap was blistering in pace and a nice achievement for the French rider who really is cementing his right to be in the top class. In amongst the joy comes sadness and devastation. The same emotions can be felt by the fans. Zarco and Dovi were so deflated after their races that the next week and half will be essential for them to recover and come back stronger. If they cave in to the emotions of defeat, their riding will turn sour and negative results arrive. In this type of motorsport, you have to be prepared for the ups and downs. Put yourself in their shoes and imagine what it would feel like and how you would improve. 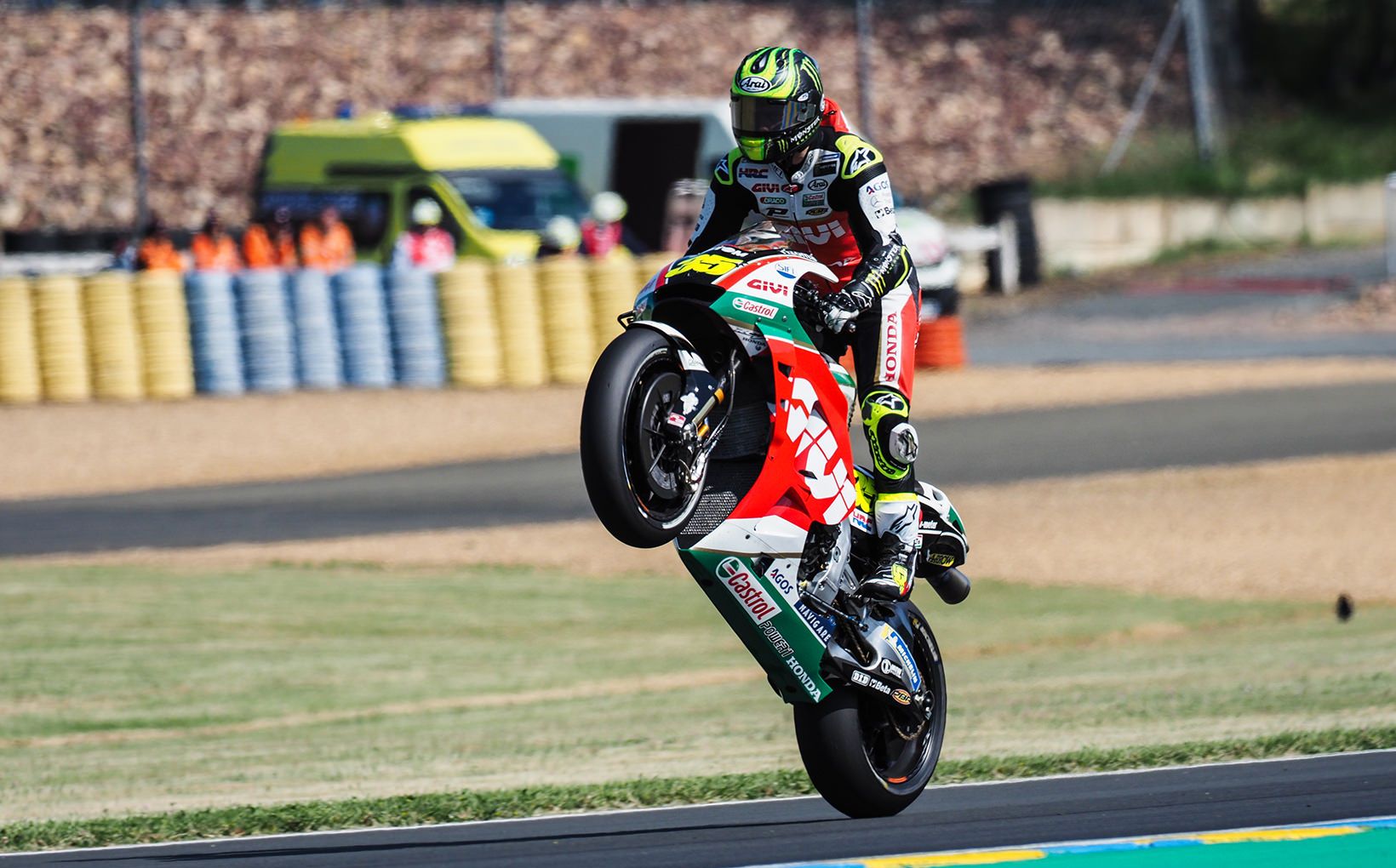 For example, ride of the weekend goes to Cal Crutchlow after his horror accident which had him flying through the air and landing on his back and side with incredible force. It took place during qualifying and Crutchlow was in immense pain and ended up spending the night in hospital due to internal injuries. He is warrior and we will tell you why: he spent time being assessed even when he was in pain, decided to request to race after being in hospital, was passed fit by the medical staff at the circuit and finished 8th even when he was severely bruised and as some have heard, suffered blood in his lungs. Talk about determination! Crutchlow did the best he could on the day as a result of his accident. This is an example of courage and a strong mindset. 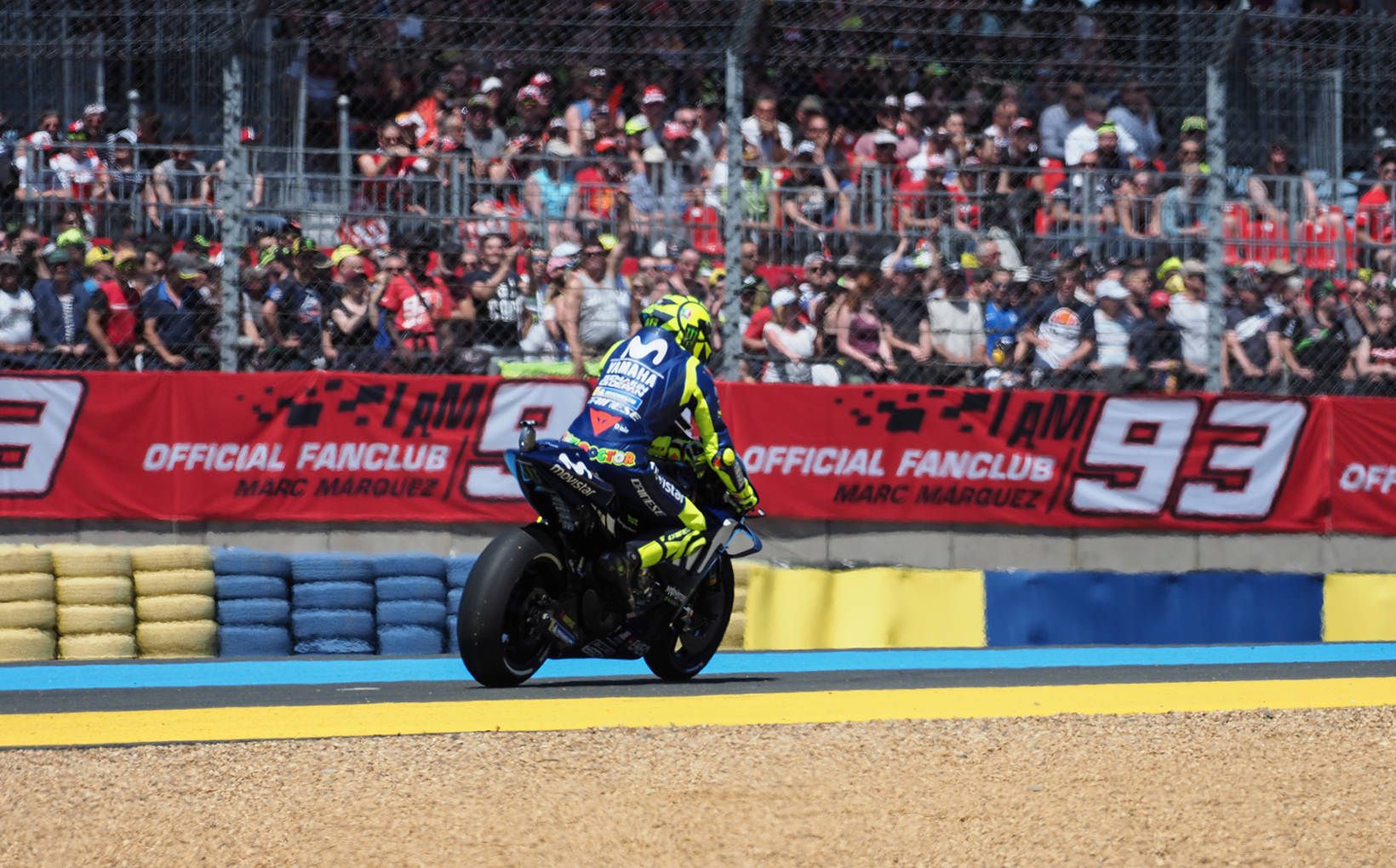 In contrast, Rossi felt quite pessimistic over the course of the weekend. He did not look his usual happy and determined self. In fact, he was not satisfied with the qualifying performance whatsoever. He was aware that being on the third row to start the race is a challenge on its own and it was an impeccable display of strength to finish on the podium. Rossi’s emotions were the complete opposite on qualifying day to race day. The modifications the team made assisted to provide more grip though a loss in acceleration. The Italian Doctor did his job on the day regardless of the issues present with the Yamaha machinery and is still within reach of the World Championship. His mindset is beginning to shift quite rapidly after achieving a podium finish and this is where certain riders excel and others crumble. Mugello is going to be an epic race, so be sure to tune in.