Marc Marquez Destroys the Field in Japan to Take Another Win! 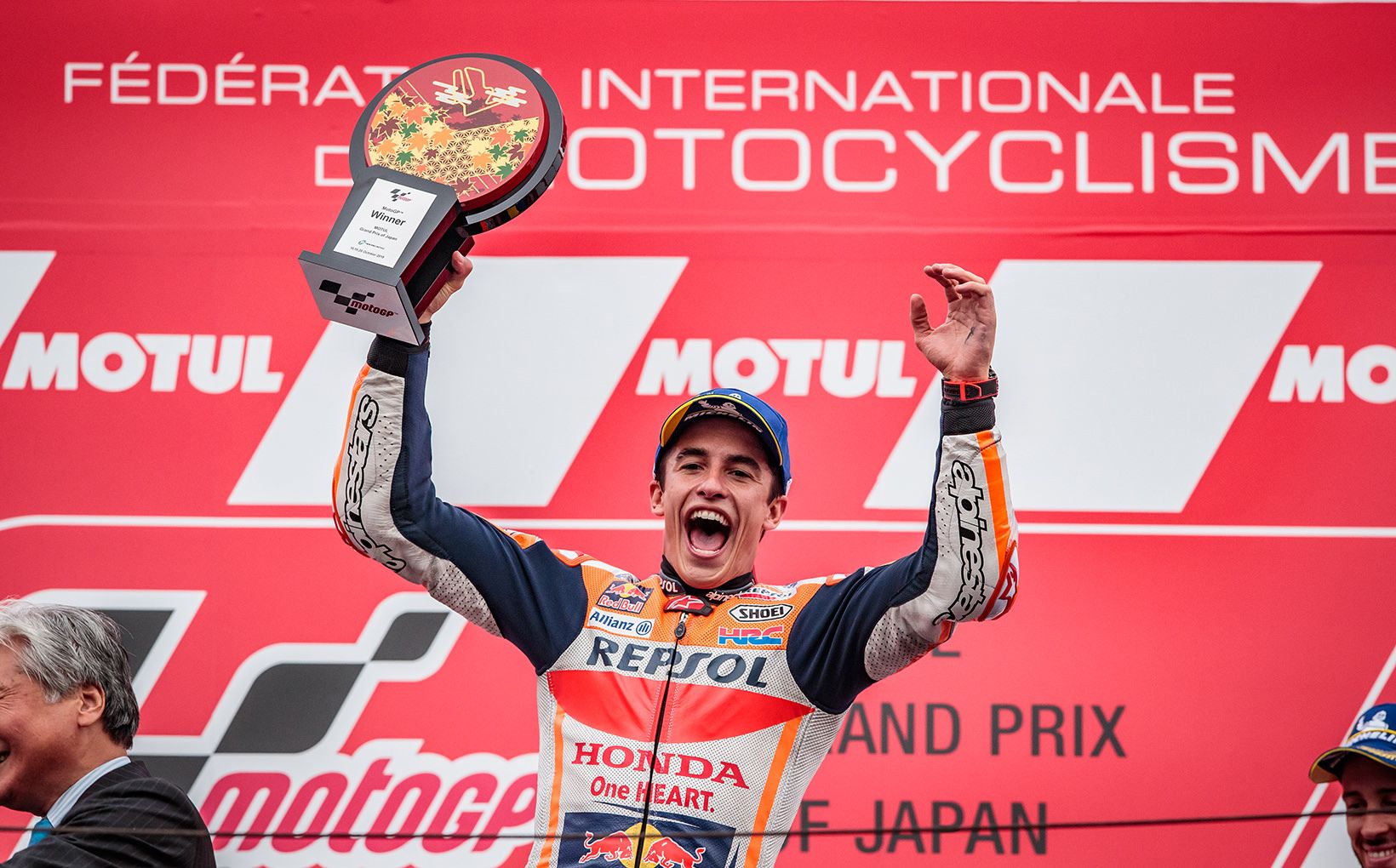 Marc Marquez has won the 2019 Japanese Grand Prix in style winning and absolutely destroying the field.

MM93: “It wasn’t an easy race. I was pushing from the beginning, the strategy was clear – I had to try to open a gap. I felt strong and with the team we had calculated a pace of 1’46 low but then I was able to ride in 1’45 high – good news for me but I had to slow down a little bit. I worked on riding as smooth as possible and I was able to open the gap to two seconds but in the final two laps we were getting a little low on fuel because Motegi is always very demanding. There was a little bit of pressure to win the Constructors Championship in Japan, but I love the pressure and it is great to win it here for Honda because everyone works so hard. All the Repsol Honda Team did a great job to find the best setting and strategy for this race.” 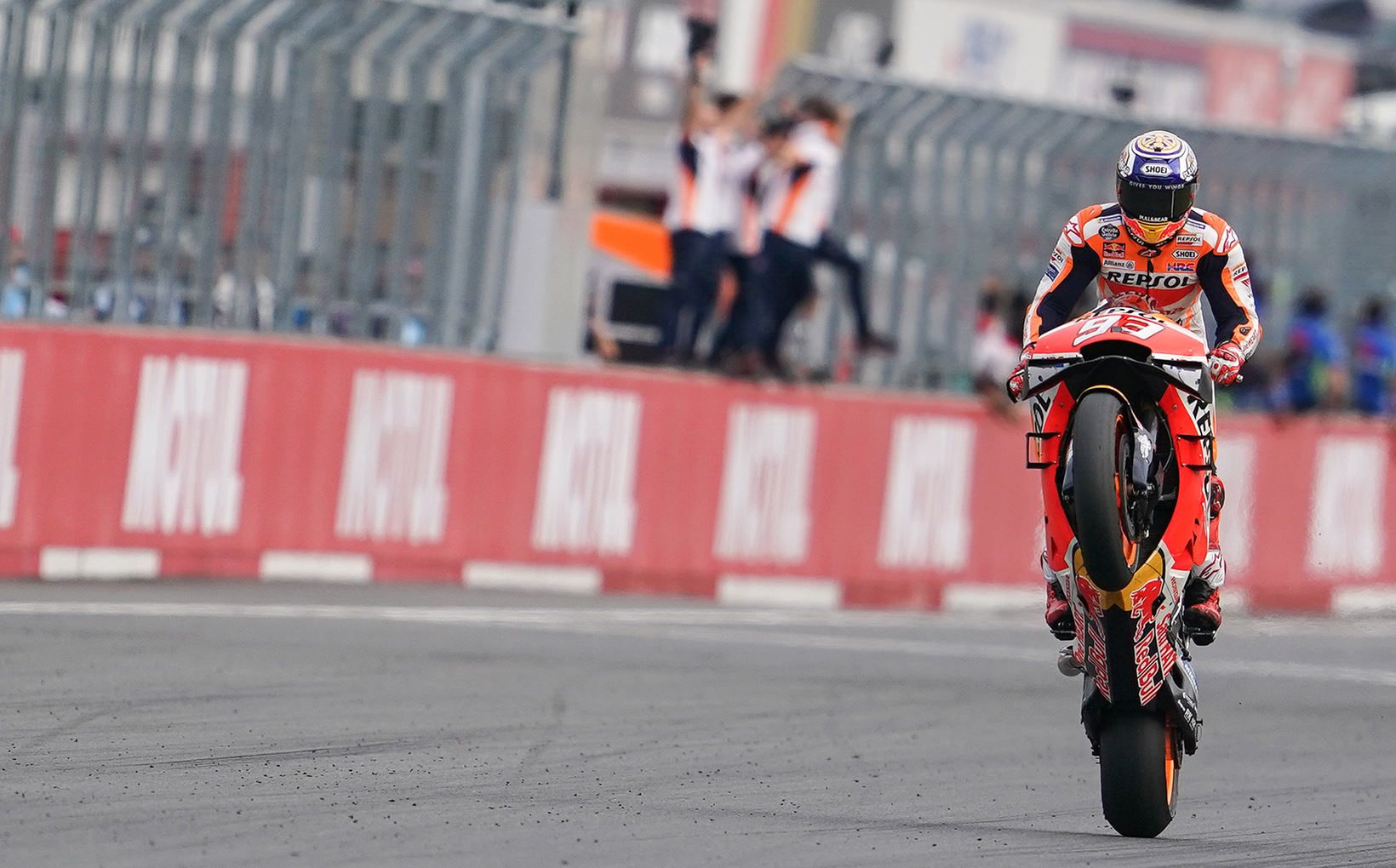 There was no contender to chase Marquez even if we wanted it as spectators. The battle between the World Champion and Fabio Quartararo only lasted a few corners and then it became a race to stay upright rather than crash. The French rider managed to bag the rookie of the year title which is superb considering his hours on board a MotoGP bike in 2019 have been limited with new tracks to learn and a bike to manage. It is quite exciting to witness the birth of a new stallion ready to charge forward and really shake up the Marquez train. With that said, right now Marquez is one fierce competitor and hard to beat. We have a feeling that he will aim to win every remaining race and cement his stamp as one of the greatest MotoGP riders in the history books.

In comparison, teammate Jorge Lorenzo did not have an ideal race and finished at the rear of the pack which is just baffling to a lot of fans and those who work directly in the sport. Could he be scared, struggling significantly to control the Repsol Honda or just feeling the pressure of switching to a machine that is completely out of his comfort zone?

JL99: "We made an improvement on the bike this weekend and my feeling was better. Today in the second part of the race I was able to enjoy riding the bike again and go much faster than at the start of the race. At the end we were closer to the front than any of the other races since my injury, a second from the fastest in the last laps. The problem was at the beginning, I couldn’t play with the bike as much as at the end and this is where we lost all our time. But towards the end I was able to little by little, brake later and go faster. With the pace at the end I could have been closer to the leader. Now we try to keep the momentum for Phillip Island." 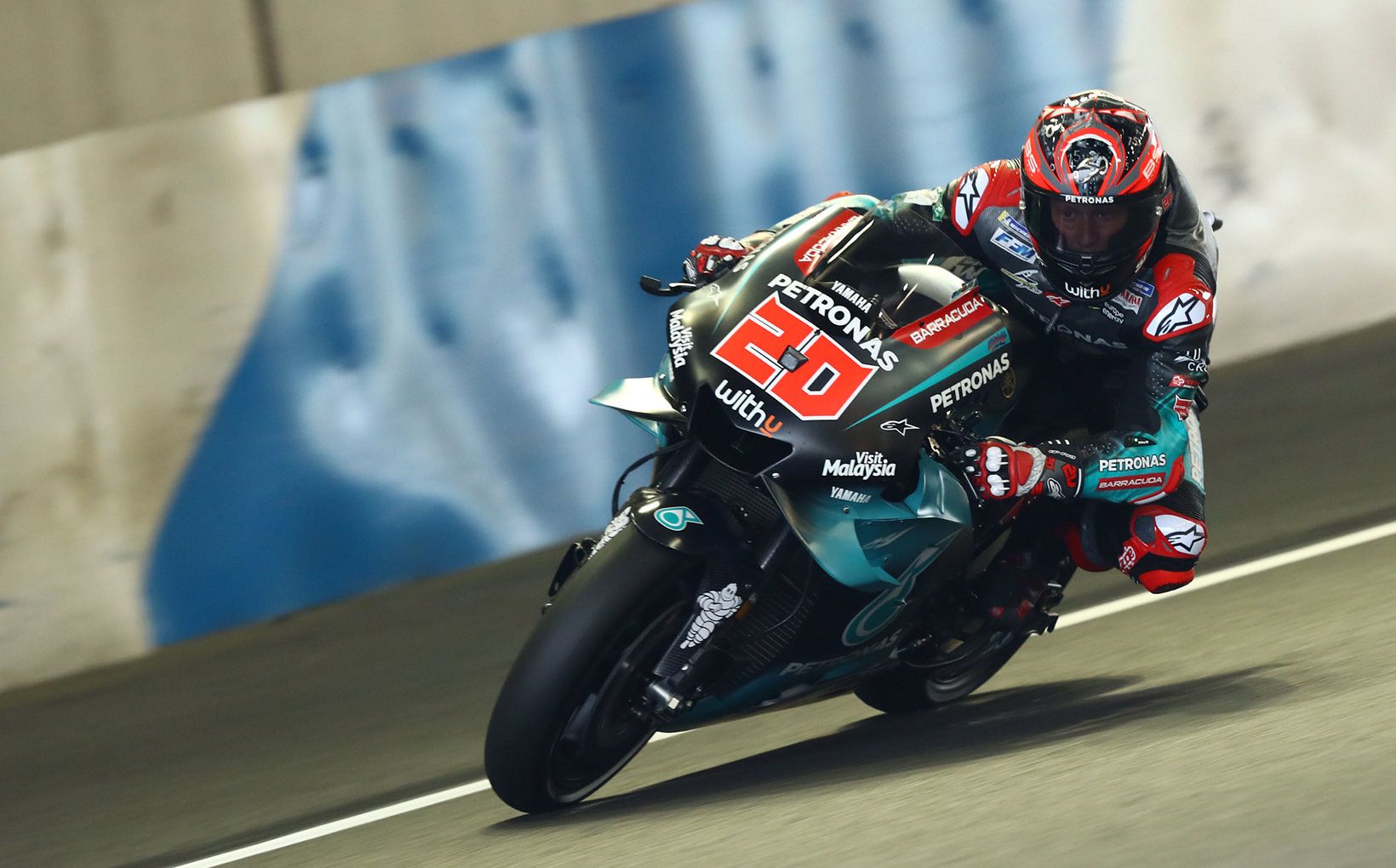 Quartararo is the new shining light of the paddock and we are thoroughly enjoying his journey. It is a beautiful achievement to see a rider flourish when the opportunity arises. Winning a race this side of 2019 would be incredible for not only the individual rider, also the team which is so fresh to the sport.

FB20: “I’m delighted with the weekend because the goal we set ourselves at the beginning of the season was to be best newcomer and we’ve already managed it. We have 163 points, which is an amazing achievement considering we were targeting between 50 and 90. We’ve been a big surprise to everyone, and it’s nice to be able to officially say that I’m Rookie of the Year. When I look back to last year when I was fighting for top 15 finishes in Moto2, I only think about how much I owe everyone at PETRONAS Yamaha SRT and Yamaha for putting their trust in me. I’ve done my maximum to help them believe in me, and together we’ve done an amazing job. We’re still fighting for good positions in the championship but trying not to think about it too much, so we’ll take the remaining races as they come and see what happens.”

During the race, there was a glimpse that Jack Miller was going to finish on the podium or take it to the new rookie of the year. However, it was not meant to be and Miller faded very quickly with tyre wear causing him to not be able to push like normal. This is a common occurrence for Miller and it will be a learning discovery for the team in order to produce a more competitive package with the Michelin set up.

JM43: “Unfortunately after 7 laps, I started to have some problems with the rear grip and the situation got worse in the following laps. From that moment on I could only try to get to the finish line. It's a shame because I got off to a good start and I thought I could follow Marc and Fabio to the end. We have to analyse the data and see what happened. I am disappointed and can't wait to be in Australia.” The Phillip Island race will be a chance for Miller to reshape this last part of the season and truly shine in front of the Ducati factory. 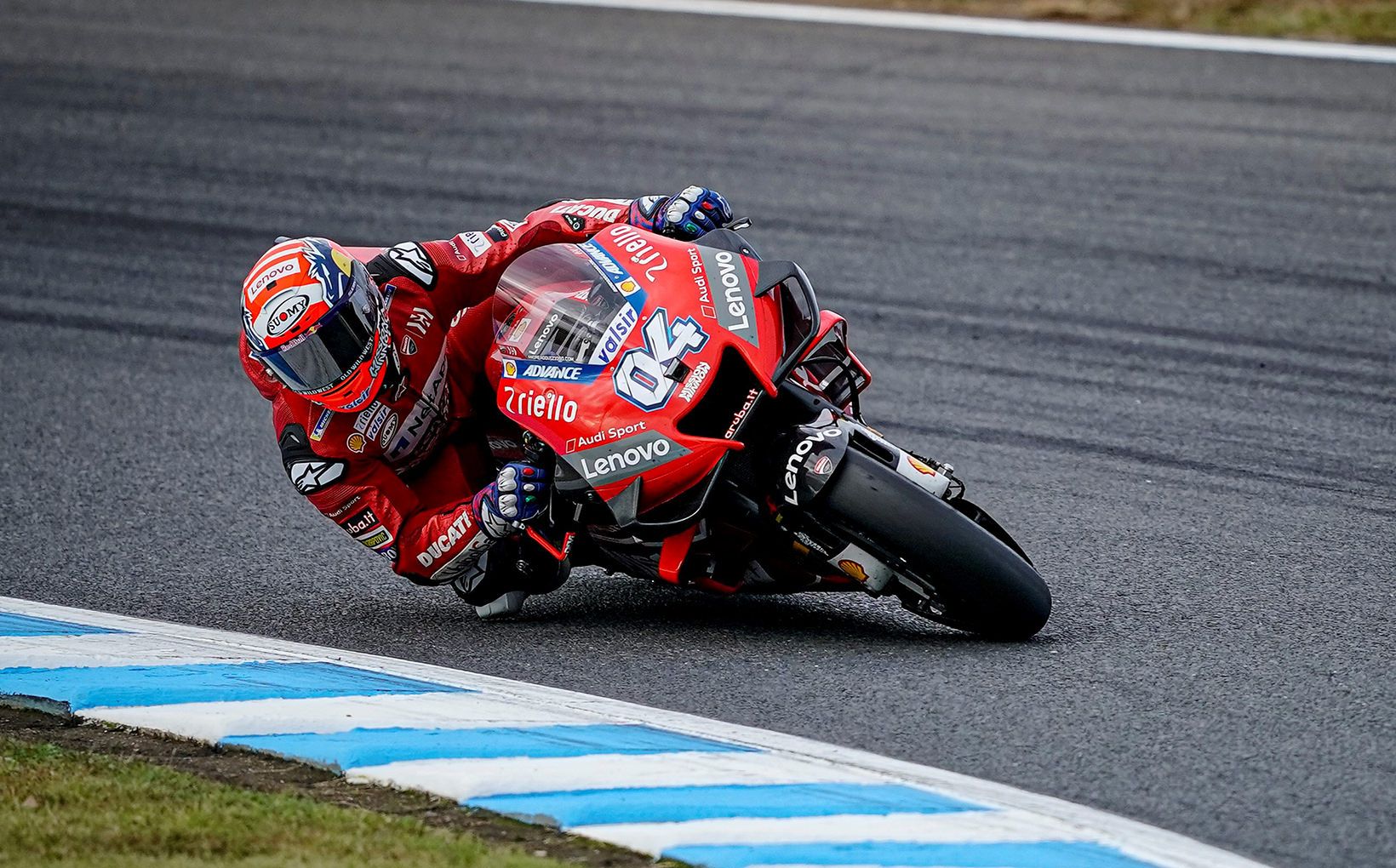 With the above being said, if you were convinced Andrea Dovizioso was happy with third, you would have to question it because he appeared annoyed during the press conference interview in parc ferme. He was vying for second the entire race though was not able to utilise the Ducati package to get ahead which was frustrating for the Italian rider. He is someone that wears his heart on his sleeve so emotions are not shy of being showcased.

AD04: “At the end of the race my feeling with the bike was really excellent, so much so that we did our fastest lap on the penultimate lap. Unfortunately, I wasn’t able to pass Quartararo, who I saw was in a bit of difficulty in the final stages, but I think I could have overtaken him if there had been one more lap. I’m quite disappointed with my first part of the race however, because despite having good grip we were unable to be fast enough. We’ll now have to analyze the situation in detail to understand what the problem was and be ready for the race at Phillip Island.” 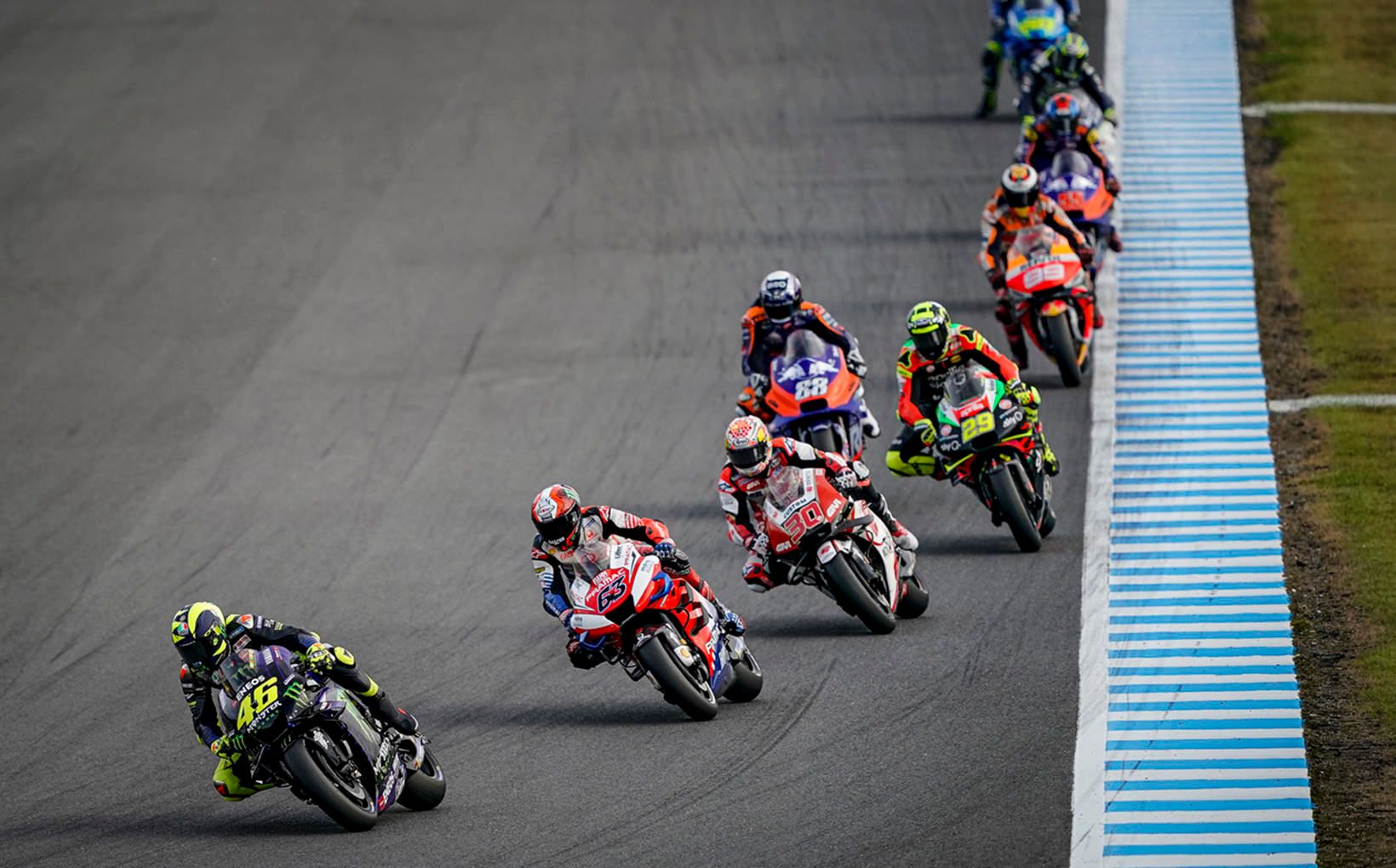 Finally, for those Valentino Rossi fans, you may as well close your eyes and hope that change is coming because it was a disaster finish for the Doctor. It was another tough race with ups and downs this time a flip into the kitty litter as Rossi binned the Monster Energy Yamaha MotoGP bike. 2019 has been tormenting for the star rider and a reminder of how quickly a bikes performance can be outdated. Changes must arrive fast because 2020 could be another hurdle if the Yamaha crew are not on target and listening to the demands of the riders in order to produce a bike that is title worthy.

VR46: “I had quite a bad start, not in the first corner but after that I was in the middle of the chaos and lost time. My pace wasn’t good enough to gain positions fast. I managed to recover a few, but I wasn’t very strong. On some laps my pace wasn’t so bad, but everybody was fast, so that made it very difficult to challenge from behind. I haven’t seen the data yet, but I think I made a small mistake at the end, in Turn 1, and I crashed. It was a difficult race.”

With more battles to come, Phillip Island is going to be an epic display of courage, passion and skill. Who knows what could take place as last year threw some spanners into the chains of the riders causing them to crash, lack performance and also become highly erratic with tyre choices!