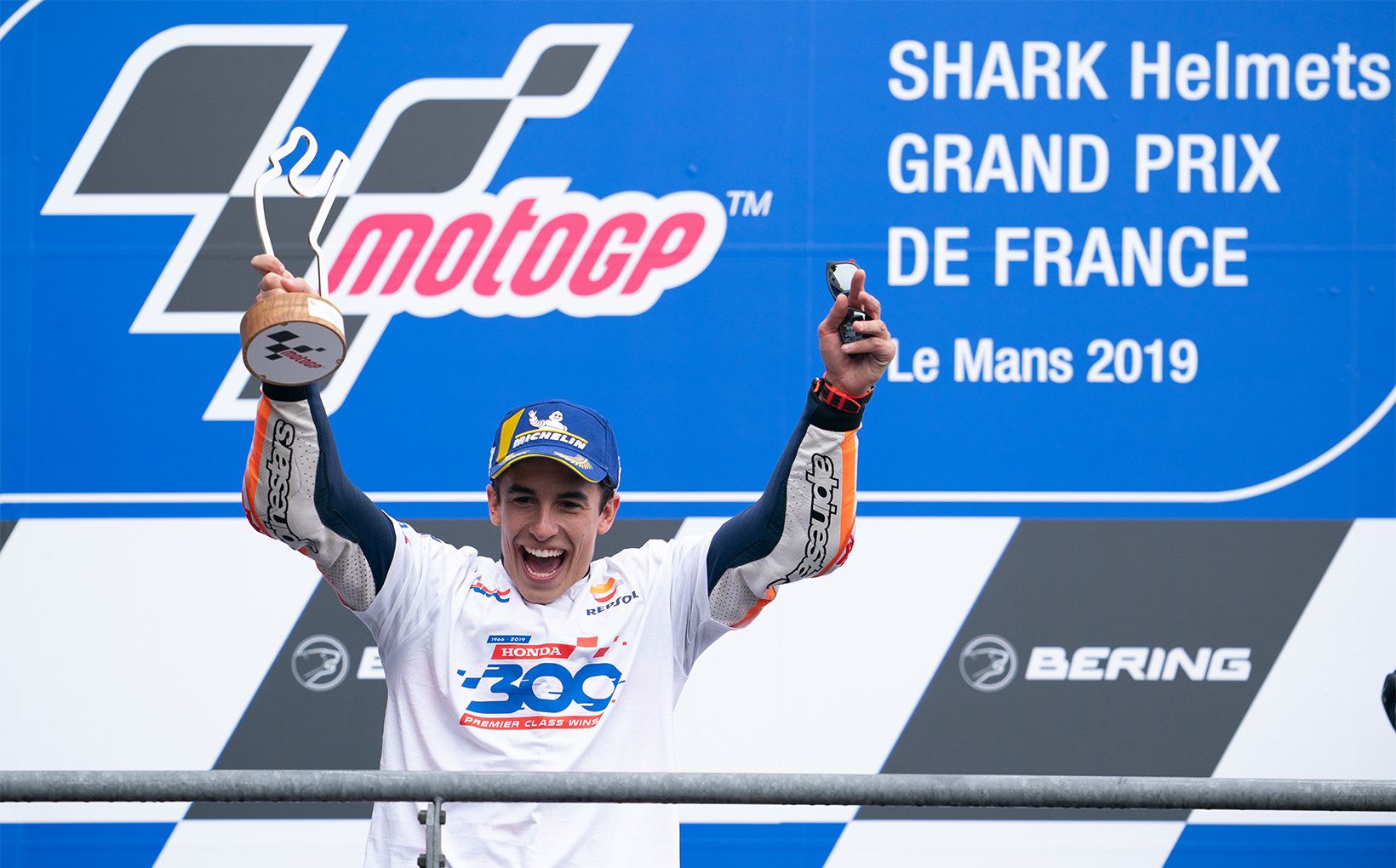 The 2019 Le Mans Grand Prix was spectacular with highs and lows for every rider on the grid. The start was disastrous for Joan Mir and Karel Abraham who locked their front tyres and ended up in the kitty litter on the warm up lap. Both riders did everything they could to re-start with Mir able to recover whereas Abraham black flagged. It was interesting to watch the pit boxes go from calm to extreme chaos within seconds. 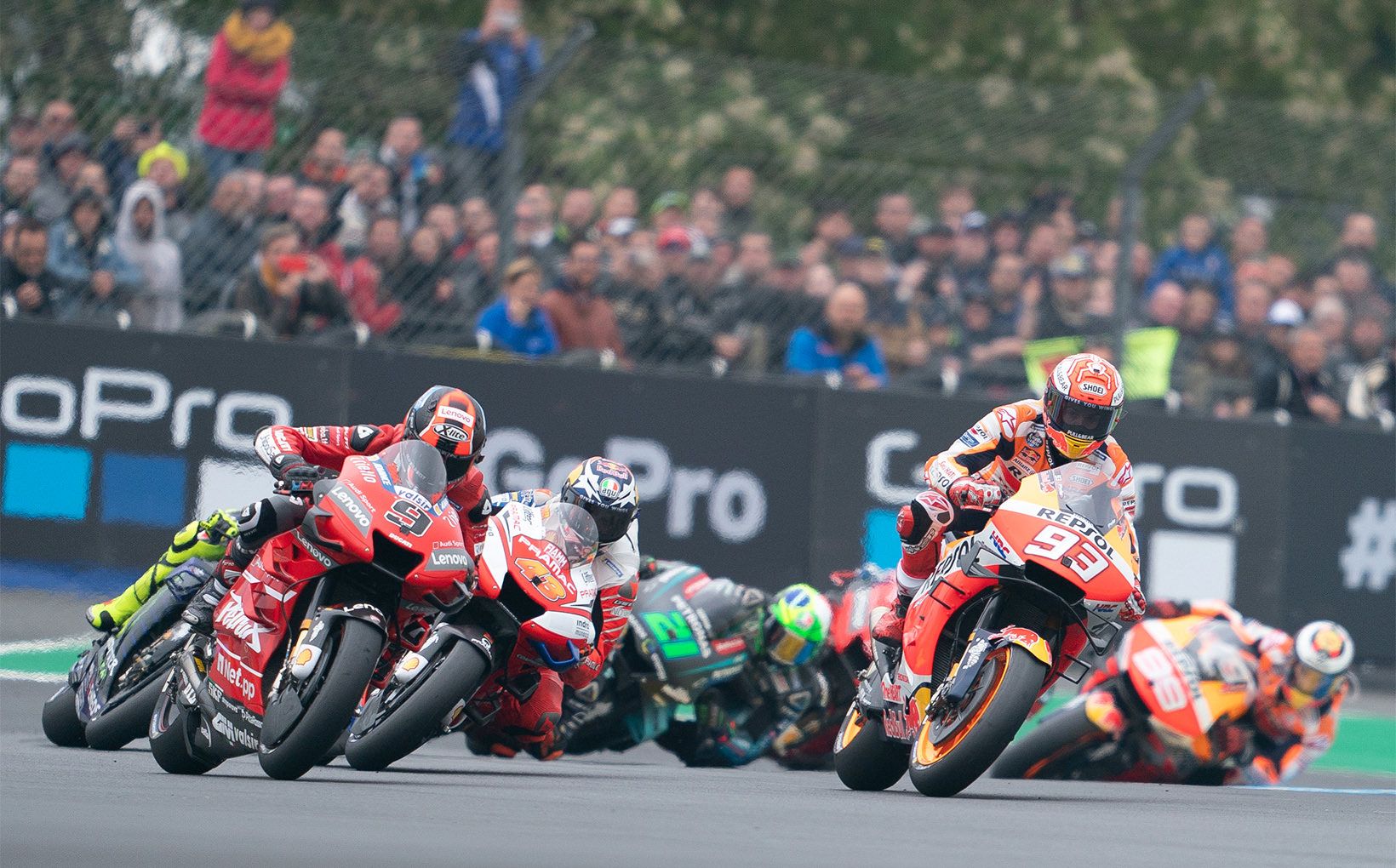 Whilst the drama took place, the rest of the grid lined up for race start and it was a tight first lap between all riders especially at turns two and three. Talk about an absolute adrenaline rush! The dominant factor across the weekend was Marc Marquez who managed to steal the limelight from crowd favourite Valentino Rossi.

The Spanish Ant dominated the race with consistent lap times, pushing the limit even when he could have eased off and enjoyed the celebrations with his Honda team as it became the 47th win in the premier class for the young World Champion and 300 for the factory. MM93: “Of course here in Le Mans it’s always difficult with the temperature and the weather, especially today. I think this is the first time I have had a race where I had the soft tyre in the front but it was the safest option. I was focused on being consistent until I saw the gap increasing, I pushed a little bit more and into the low 32s until I saw I had two seconds. I’m happy with today’s result and it is fantastic to be able to take Honda’s 300th premier class win!” 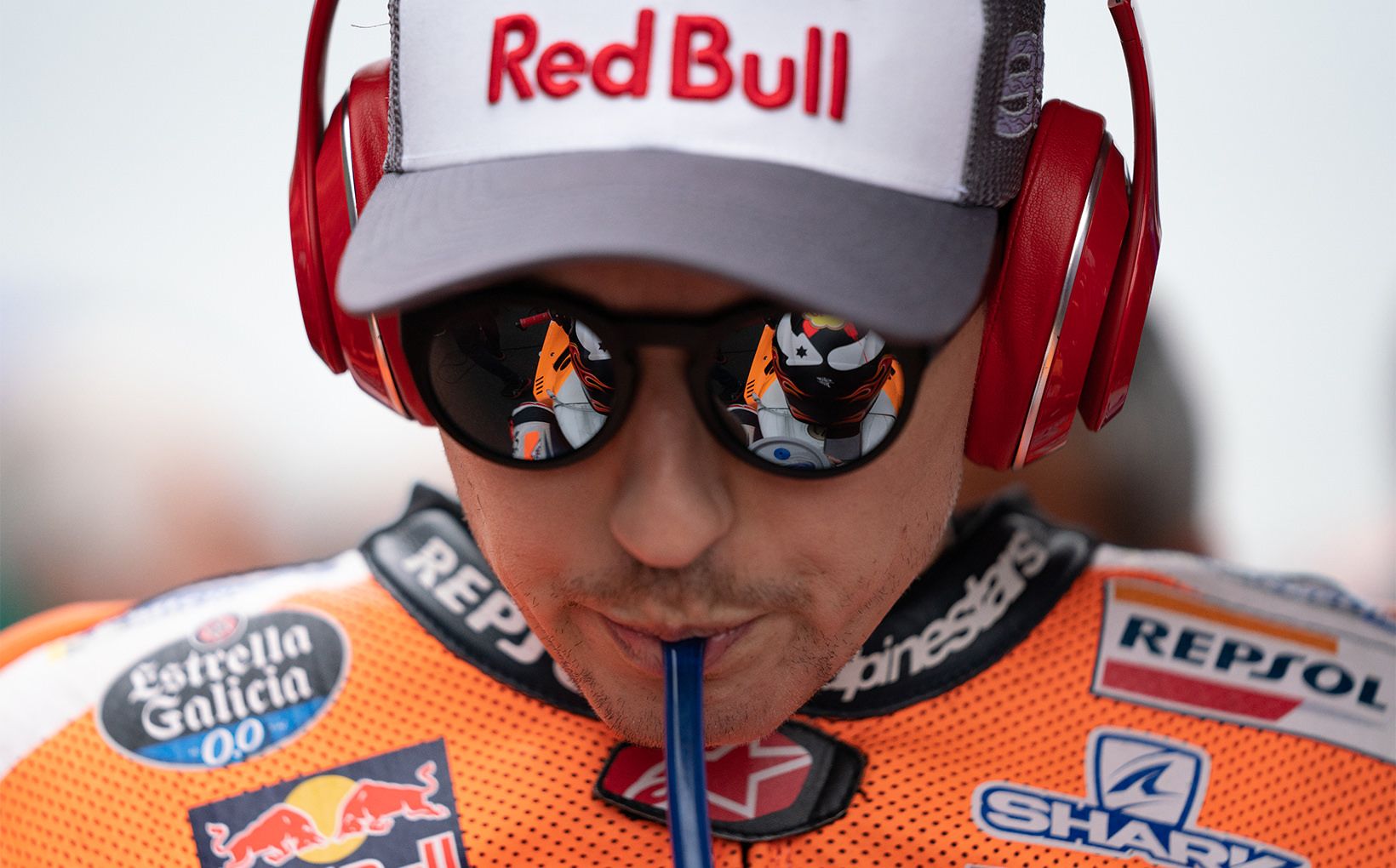 Fellow Honda teammate Jorge Lorenzo struggled more than expected as did Cal Crutchlow with the Ducati and Yamaha manufacturers outperforming from a brand point of view. JL99:“11th place is not where we want to be but I saw progress. This makes me happy and gives me even more enthusiasm for the next races. It was the first weekend I finished a day in the top five, qualified in the top eight and you know, apart from Qatar where it was a slow race, this is the race where I finished closest to the winner. We’re learning more each weekend and race, it is just a matter of time. Thanks to the Repsol Honda Team for continuing to work hard and congratulations to Honda for 300 wins.” 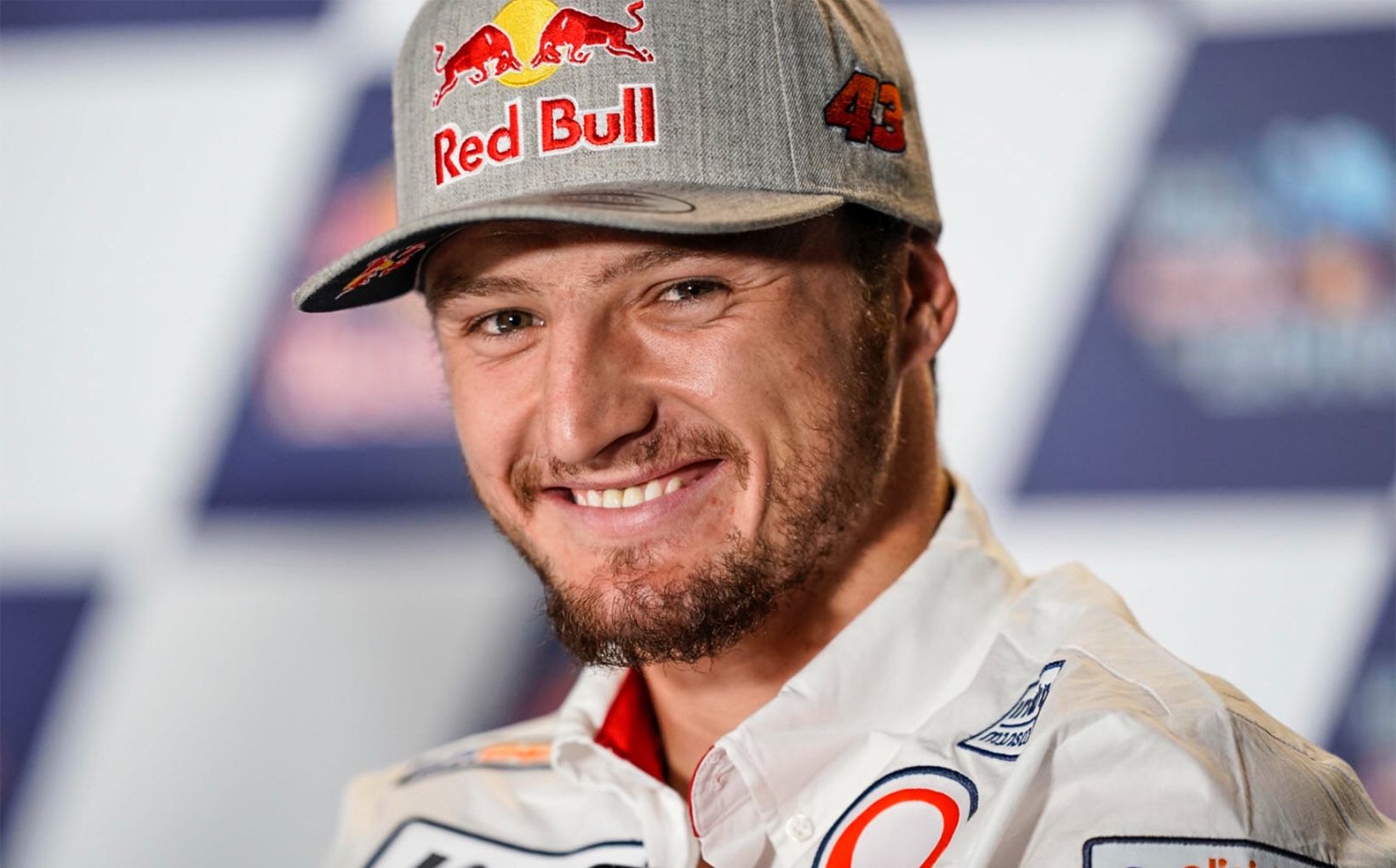 In terms of second to fifth, it was a real fight for the points and podium finishes. Jack Miller rode with a ferocious nature and was calm throughout every challenge that arose from Andrea Dovizioso, Danilo Petrucci and Valentino Rossi. Miller had a great time, felt good with the bike and enjoyed the duel that took place showcasing another step forward with his Ducati package. At this stage of the World Championship, Miller is closer than ever to another win which is very exciting to witness. The young Australian has the ability to go far with Ducati set up and it suits his riding style. 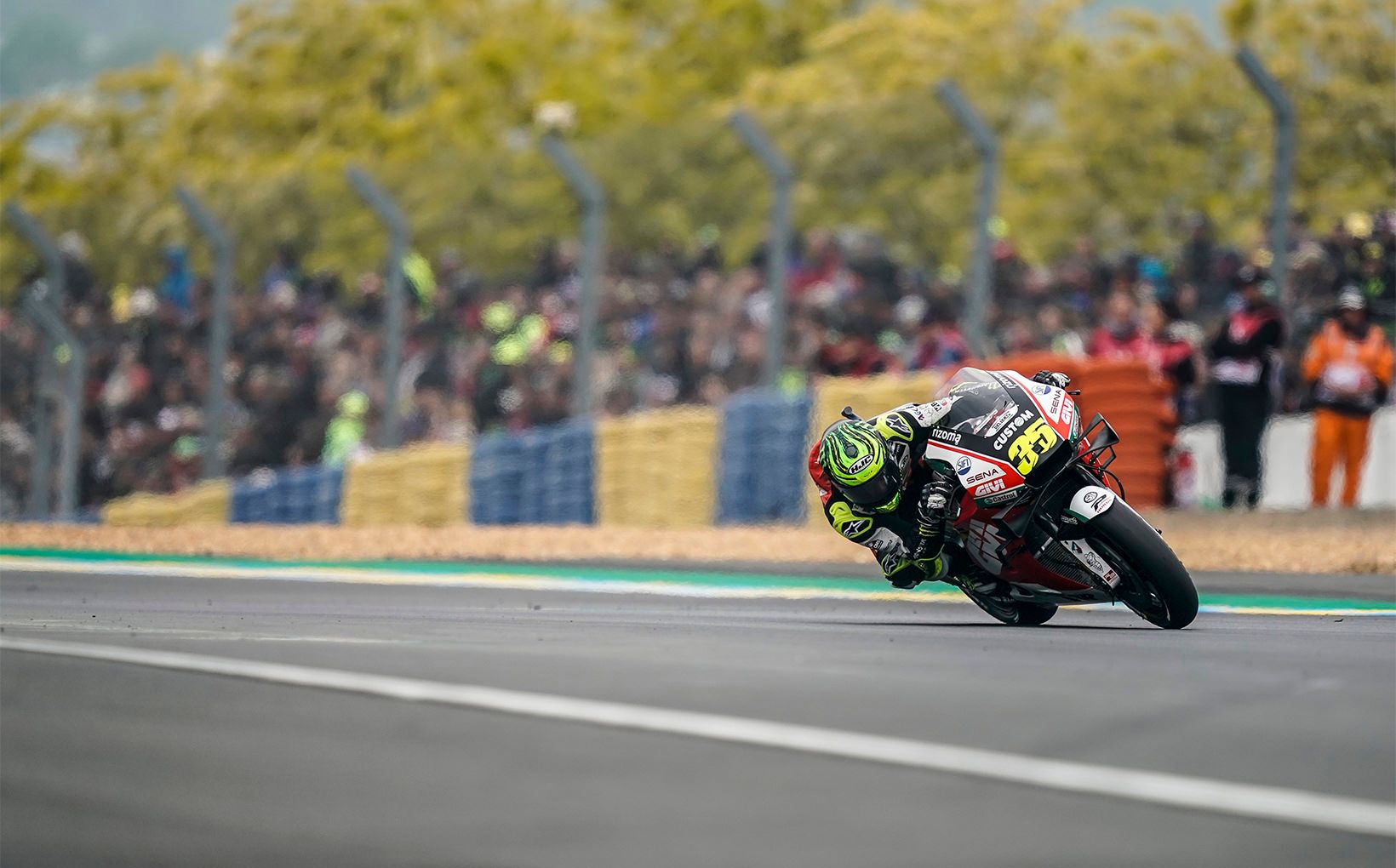 Fellow joker mate Crutchlow was disappointed with his result and did not feel comfortable whatsoever. The valuable data is a bonus however the British rider wants more. It becomes incredibly frustrating when you are not able to push and witness other riders who are less experienced higher up the charts. Crutchlow is a man of many talents and a front runner when the bike is working seamlessly. 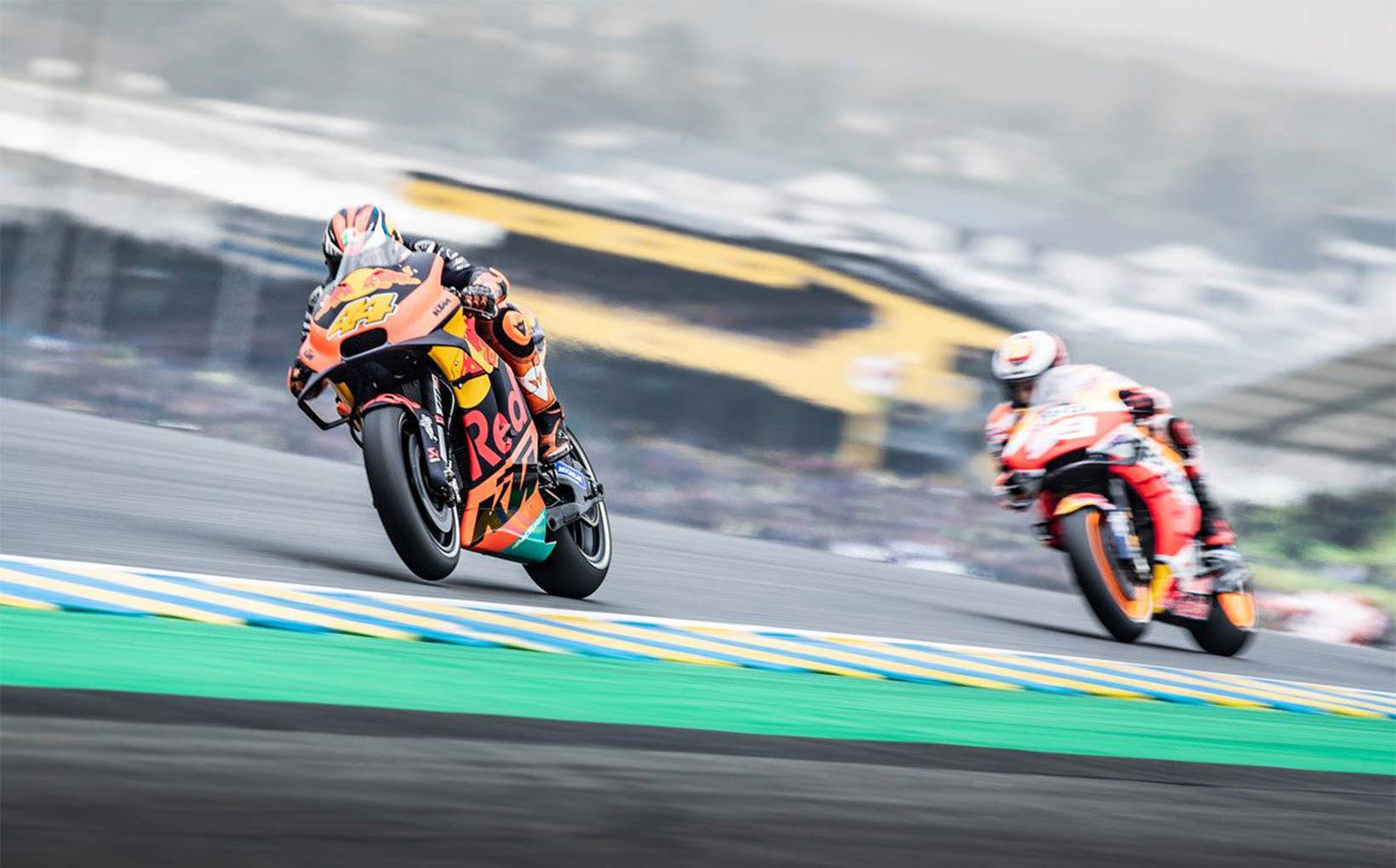 A rider who is aware of what it feels like to be at the back of the grid is Pol Espargaro. The Spnaish rider has been working tirelessly with KTM to bring forward their race package. The Le Mans Grand Prix was where the chassis performed and allowed Espargaro to finish in the top six with ease. The KTM outfit were over the moon when he returned to the garage because the hard work has been tiring and at times deflating. PE44: “Simply a stunning result and almost unbelievable after less than two and a half years. We are showing that we are on the way. I am so proud of this project. We are there because we were fifth, and we were there during the whole race. The competition is so high here with the best riders in the world and we are just five seconds from the winner and that factory. It is amazing and for sure gives us wings to keep working and be better in the next races to keep fighting for the top ten. I had so much fun today and was on the limit from start to the end and it was amazing to see we were catching Vale in some places and Petrucci needed to hit me to overtake me. This makes me feel really proud.”

The same emotions were not felt by Johann Zarco who has been vocal about his team and not being happy. The French rider did not expect the workload to be so hard and it has certainly ruffled his feathers. Zarco was told by Pit Bierer to shape up and start showing why they paid him so much money to join the orange squad. If Zarco does not bring his A game, the team are likely to invest their time in Espargaro who has been solid, loyal and always hungry for success. 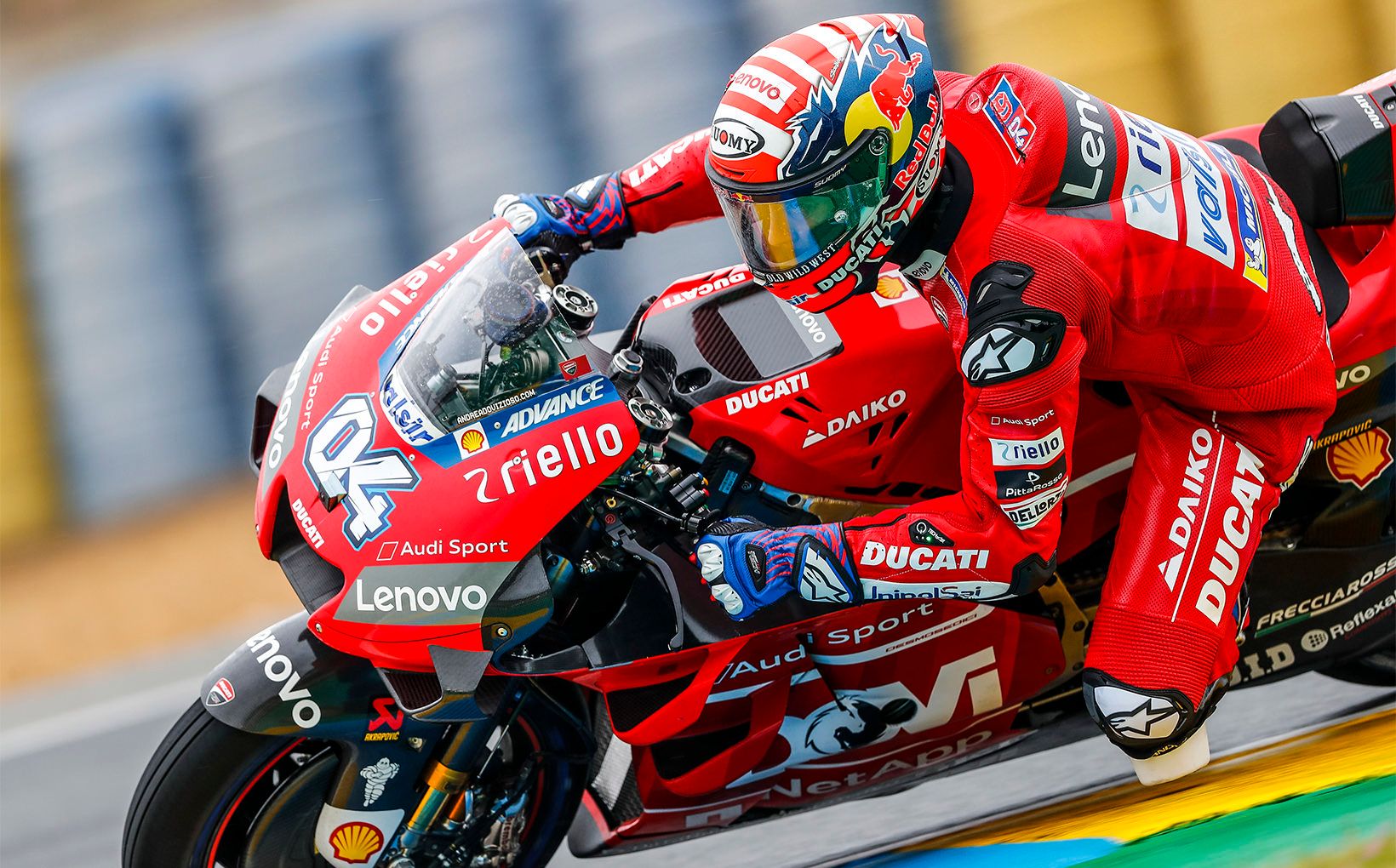 In terms of the race and partnerships, both DesmoDovi and Petrucci worked well together even with a dose of aggressiveness. The factory Ducati team were strong even when the tyres were giving them grief from Friday practice. The World Championship is the key goal for Dovizioso whereas Petrucci wanted to finish on the podium and allow himself to shine as the new investment at the squad. 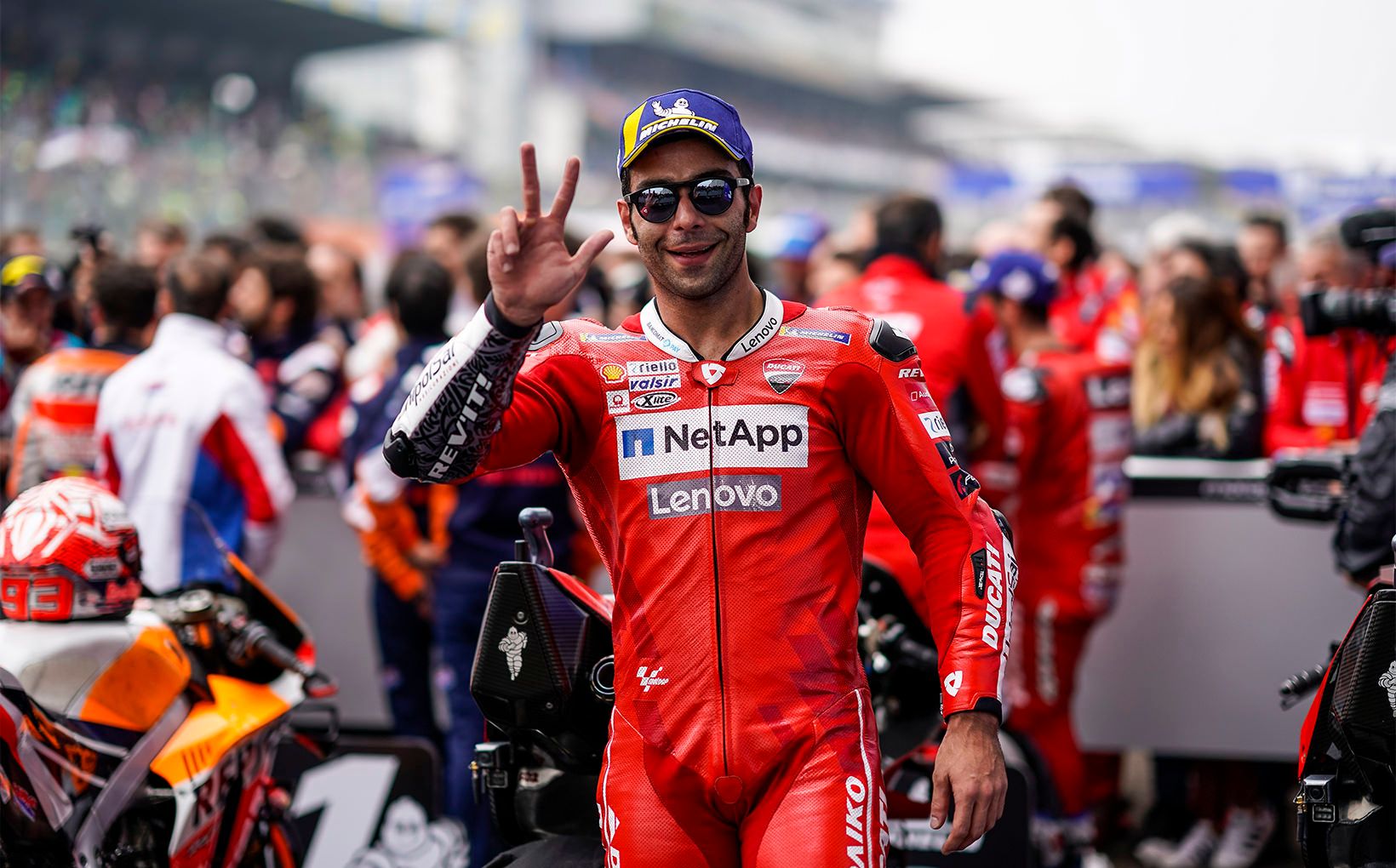 We all know that Miller has his cross hairs on Petrucci to take his job and the pressure is clear as daylight. The double podium was long overdue and going to the next home race will be a boost for both riders as the Italian fans storm the circuit and deck themselves out in merchandise supporting the home riders from across all three categories. It was a fair fight and we enjoyed watching the two battle it out. DP09: "It was great race and I'm so happy to finally be back on the podium, exactly one year since the last time I stepped on it. In the past rounds I've been quite competitive, but not in qualifying, and this hindered my performance during the race. This time, we managed to start from first row but I made a couple of mistakes in the early laps and lost some ground. At one point I dropped all the way back to sixth, but I tried to stay calm and collected, pushing as hard as I could to close the gap. Towards the end, Andrea and I had a spectacular fight. He was stronger than me under acceleration, while I was able to recover some ground under braking, but I was never close enough to complete the maneuver and it also wouldn't have made any sense to take huge risks among teammates. The double podium is a great result for the whole team, and now we'll try to repeat that in Mugello." A lovely guy in the paddock and a hard worker, Petrucci is ready for battle on home soil and is more in line with a friendship style partnership at Ducati than previous others. The question is, for how long? 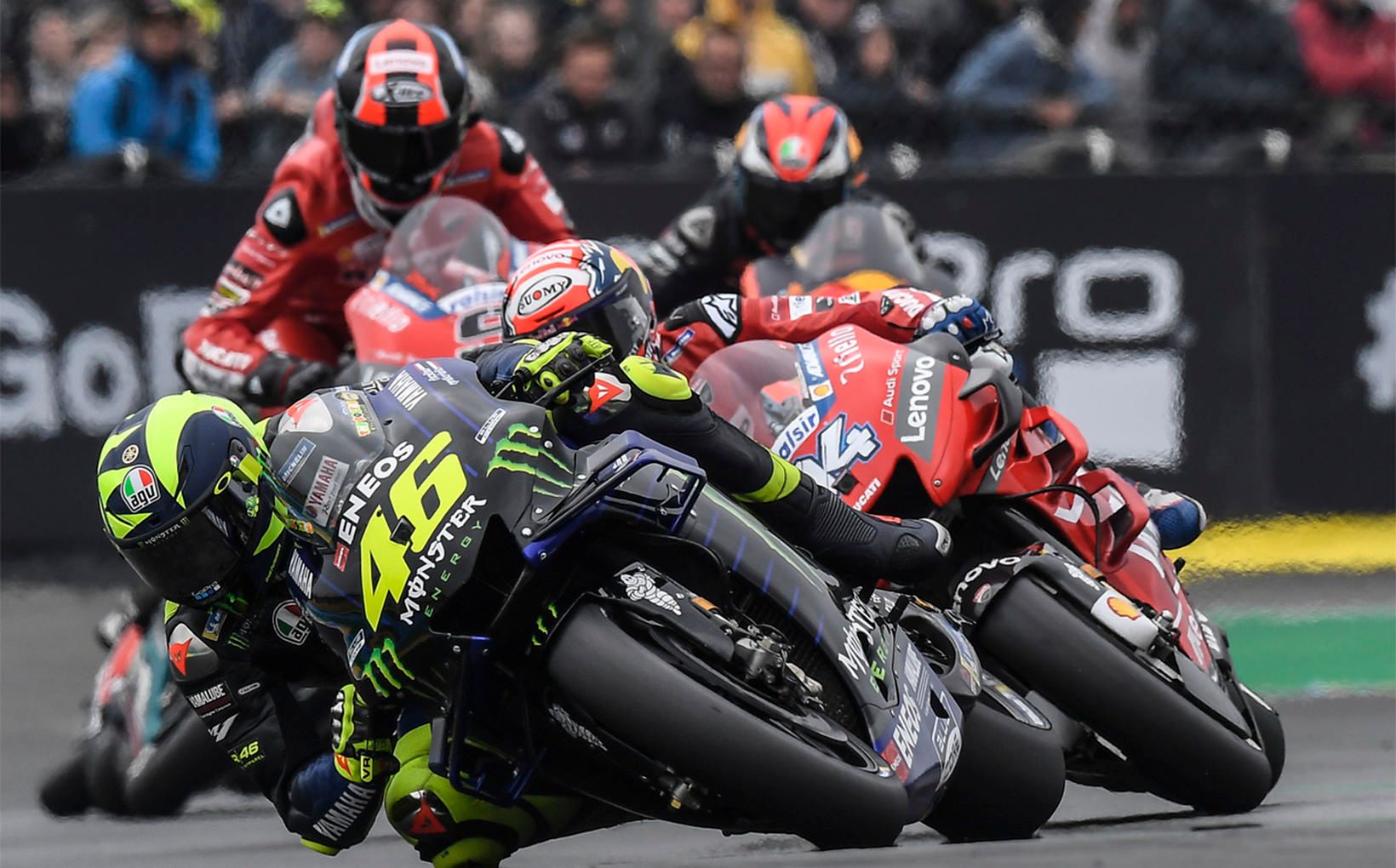 Overall, Valentino Rossi was just not quick enough to be at the top and doubt arises about his World Championship hopes when he is stuck behind various other riders with no way forward. The consistency can only get you so far when Marquez is out front, saving crashes, sliding like he is riding with butter on his back tyres and confident beyond 100%. How do you beat a rider who is just at his best…. an issue that is constantly on everyone else’s minds! 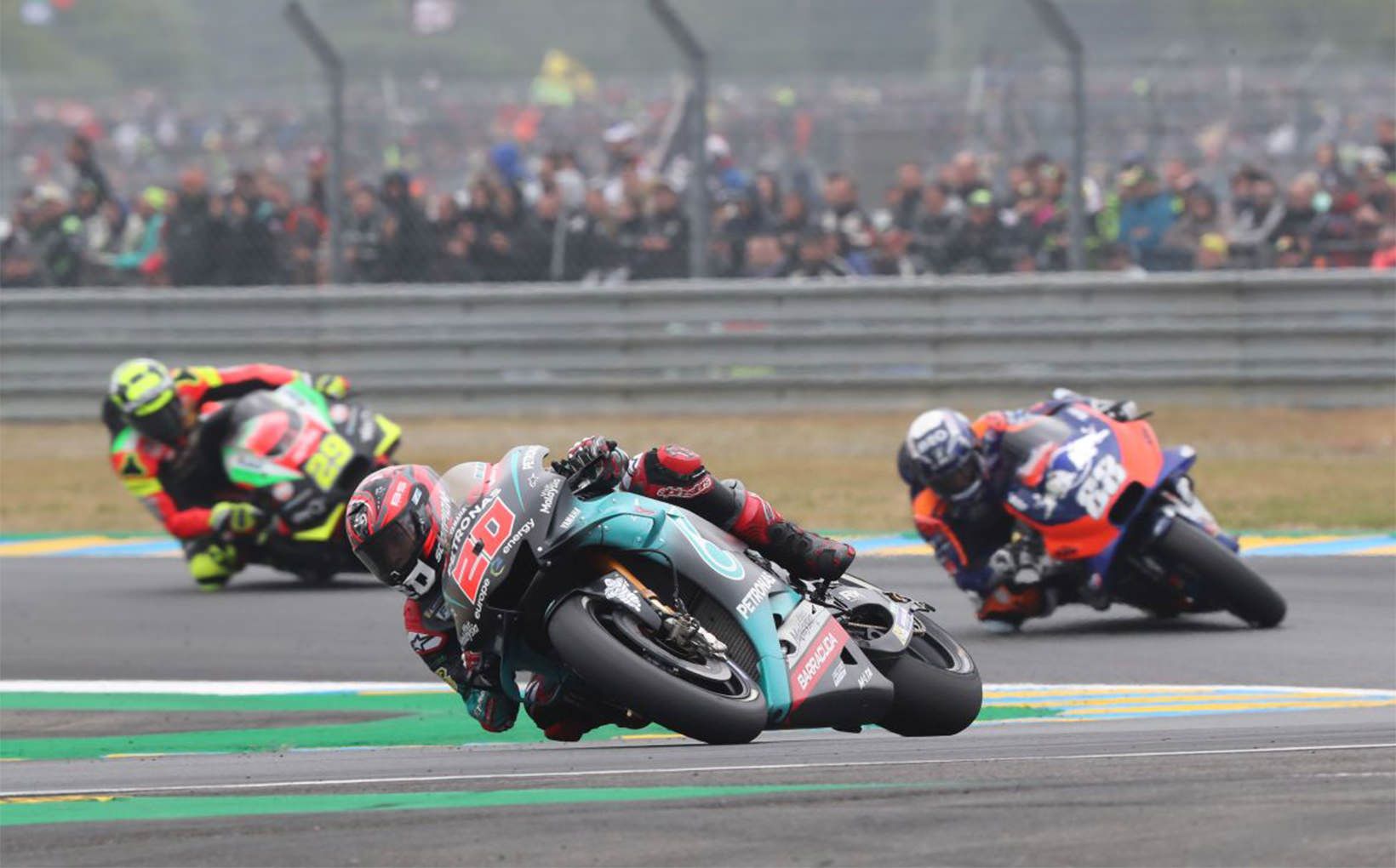 Ride of the day in terms of pace and performance regardless of a poor start goes to Fabio Quartararo. The French rider utilised the sound of the crowd to pick up his pace and fix the issue which caused him to start so far back. The first few laps were horrible for the young rookie. With that said, once the rhythm was found, Quartararo was flying and at Marquez style pace. FB20: “It’s a shame about the beginning of the race. My start was bad and it was difficult to overtake because there were six riders within a second of each other. It was very tough, but in the end we had very good pace. It’s good for our confidence that we had top five pace and a top five finish could have been possible. Today’s goal was the same as always, finishing in the top eight, and we achieved that. I’ve learned a lot about tyre management today and I can’t wait to get to Mugello and put into practice what I have learnt as it’s one of the most difficult circuits to master. We will do the best we can and we will continue working like we have in the opening races. I’m happy with the work we have done here and I hope to continue in the same way at Mugello.”

With Mugello the next race on the cards, do you think a local hero will win and stop Marquez from running away with the World Championship… who is your money on?