King Marc Marquez of the Sachsenring makes it 10 from 10! 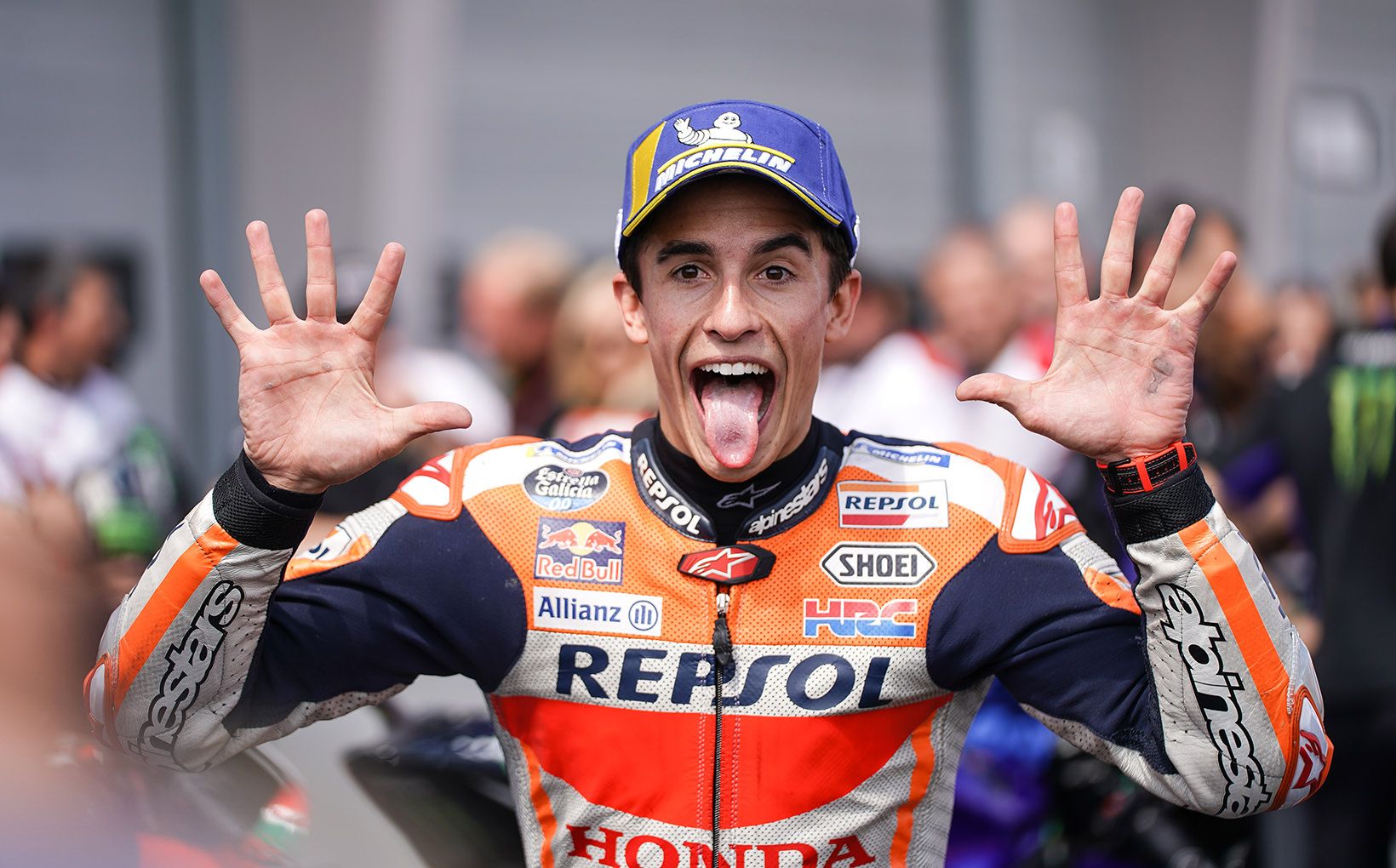 The King of the Sachsenring has stamped his boots and motorcycle upon the world once again with a perfect ten from ten. It was an impressive display of speed, calculation and dominance with a race that had no other riders even close to dethroning him. A decade of strength and complete dedication. How do you beat a rider who is just too good is the question everyone is constantly asking? Watching and analysing Marquez is amazing because you can see where he pushes the limits and attempts historic growth. For example, this weekend he put his Repsol Honda MotoGP bike to a lean angle of 66 degrees which is absolutely absurd and also at the same time unbelievable! 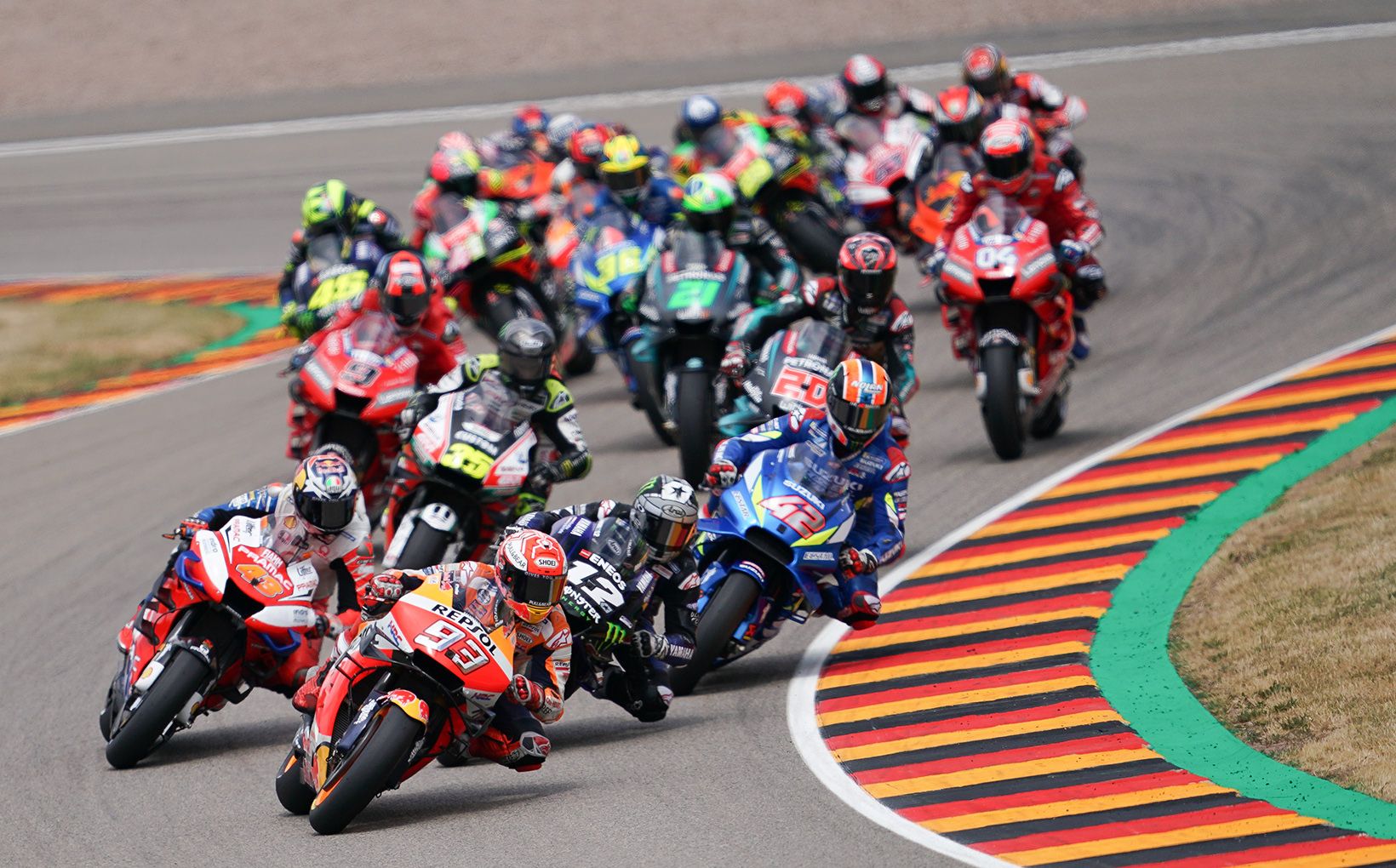 MM93: “It was a perfect strategy. But I didn’t have a perfect start as I ran a little deep at Turn One. After that my plan was two slow laps to warm the front tyre well and then push, and it’s exactly what I did. Step by step I opened the gap and followed the plan as I needed to. Once the gap was at three seconds I stayed there and saved the tyre and enjoyed riding. It’s a great feeling to win here again and to enter the summer break in this way. Congratulations also to my brother for his win today, it’s always really nice to win together! I want to say thank you to the Repsol Honda Team for their work in this race and the first half of the season.” When you are riding on the limit, hitting the perfect lap times and feeling 100% confidence, there is every opportunity of making a small mistake. With that said, this did not take place and the Spanish Ant was brilliant from start to finish. 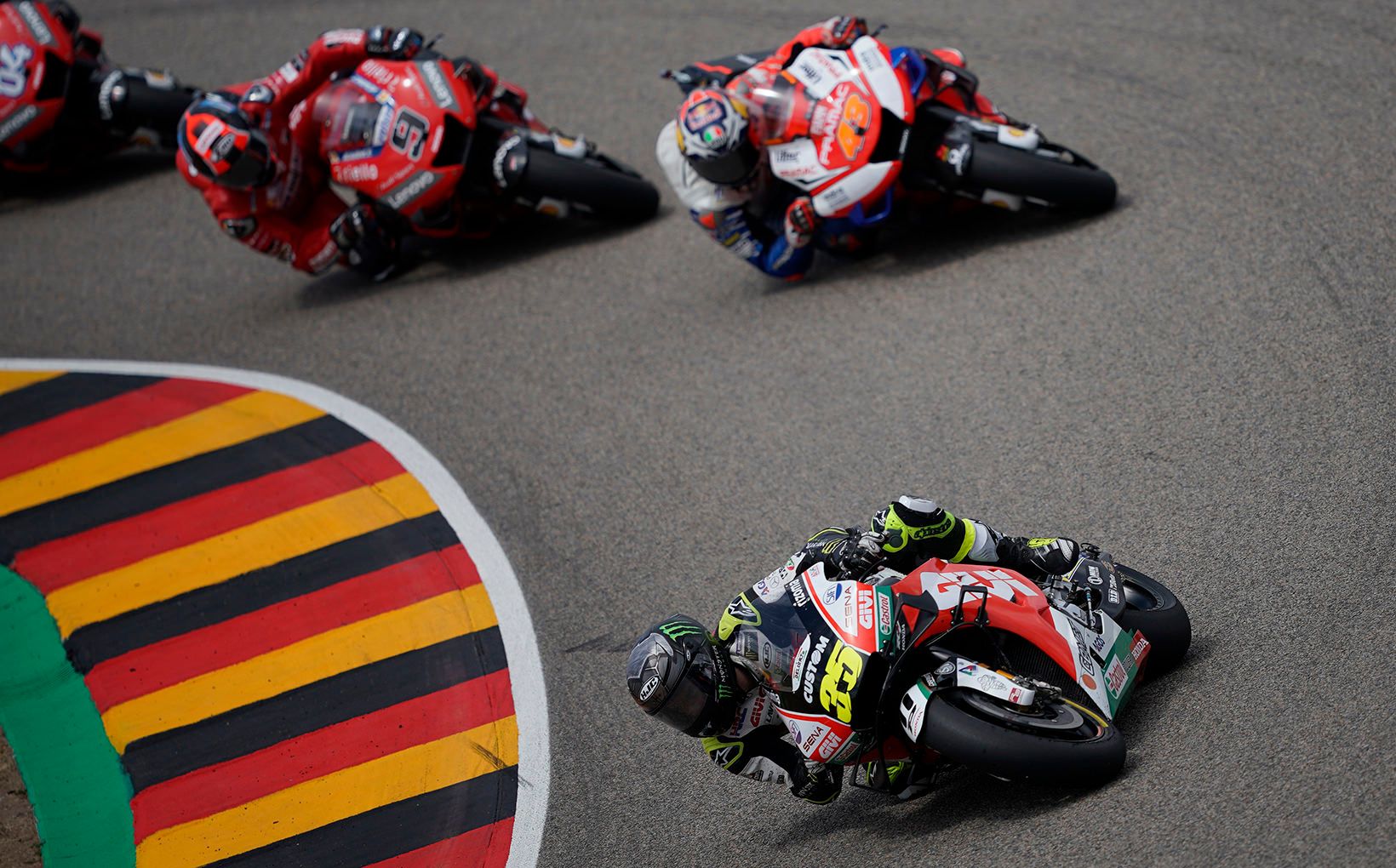 Ride of the day goes to injured British rider Cal Crutchlow who rode battered and bruised after falling off his road bicycle! His workload over the weekend was totally representative of the helmet he wore with a signature Batman logo. It was superb to see Crutchlow feeling stronger on board the Honda machine which has been quite a harsh machine to adapt to in 2019. The British rider kept pushing Maverick Vinales to the edge no matter what until with a few laps to go, the rear tyre started giving way and causing serious instability. The risk of crashing was way too high and Crutchlow decided to back off leaving Vinales to take second place. 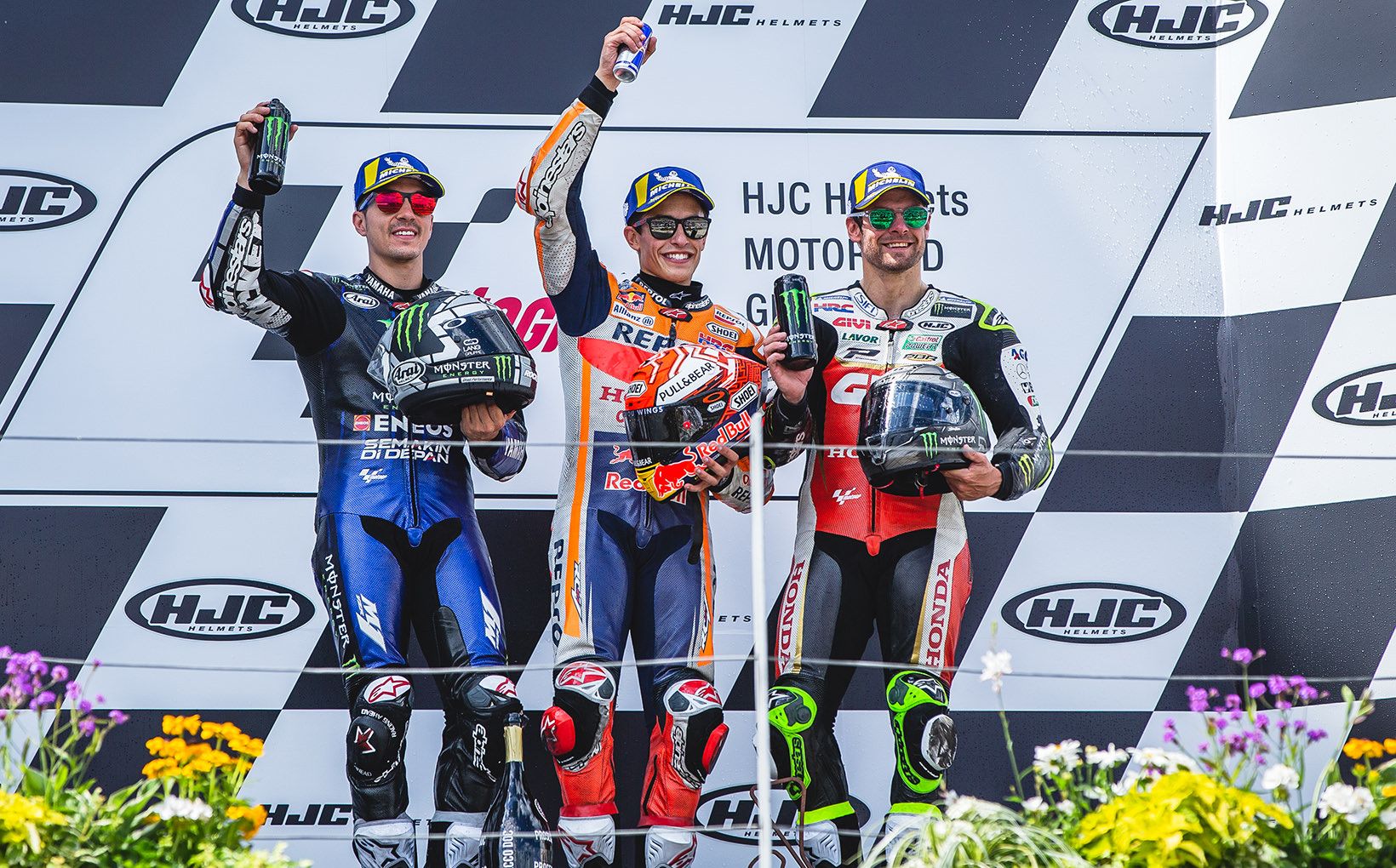 CC35: “First of all, it’s great to be on the podium at the HJC Grand Prix, the team did a fantastic job. We worked all weekend on what we thought would be a race pace. Yesterday I did around the 28 lap mark a 22.7 and that’s exactly what I did on the 28th lap today. Everybody was shocked when my pace was that, but I thought that would be the pace in the race and it was. The track condition was not great, in the middle of the race I had a bit better pace than Maverick (Vinales), but once (Alex) Rins crashed I thought I’m on the podium anyway and we had nine seconds to the guys behind and the gap was going up every lap. I planned to attack with five laps to go, but the wind was so strong that my eyes were streaming with water, so I tried to blink it out and he (Vinales) got a bit of a gap. I came again, but then with two laps to go I made a big mistake in turn 10 and lost the rear of the bike. So after that I said Maverick could have it, I’m very happy with the podium today, the team and Honda have worked very, very hard and we deserve it.” 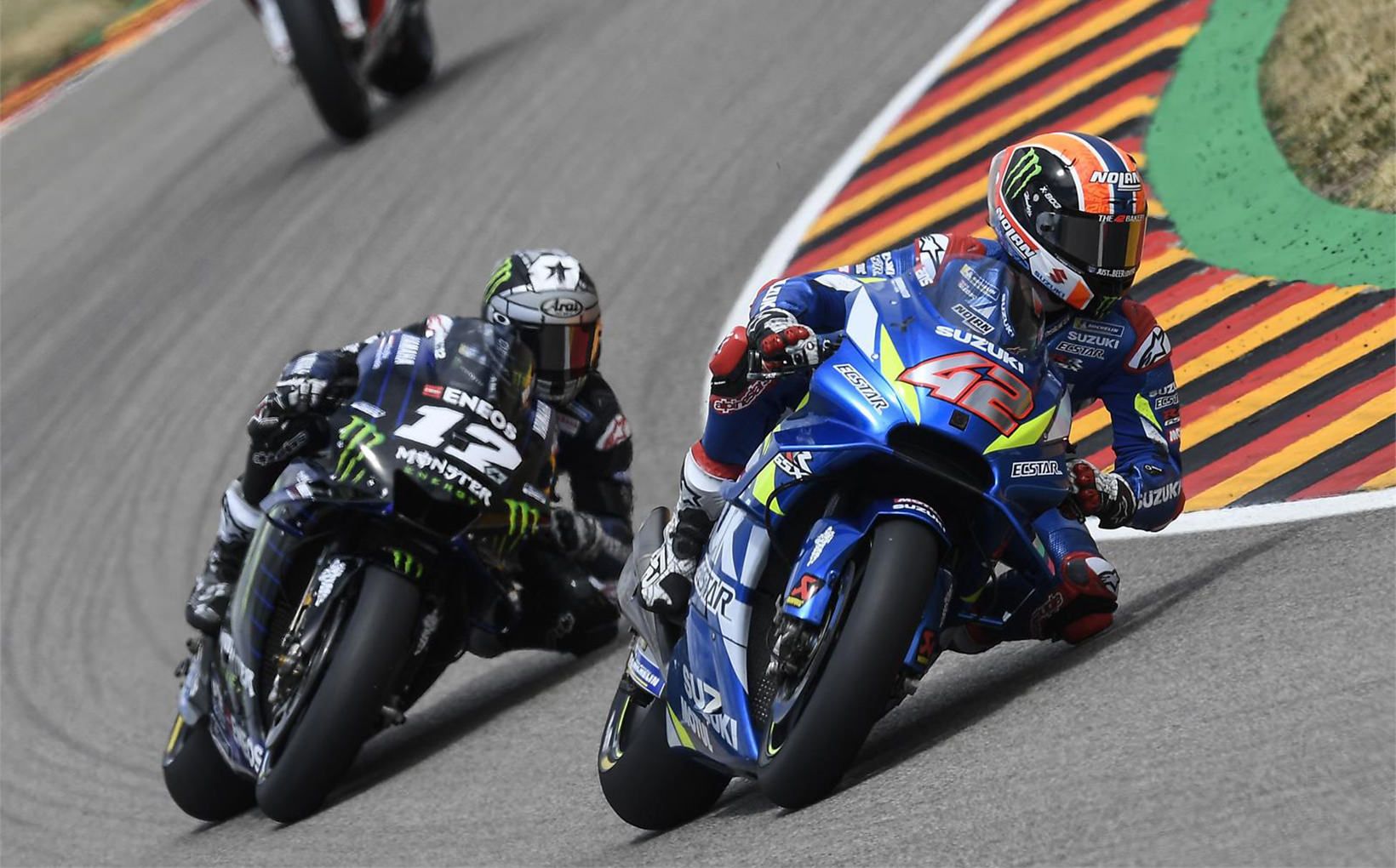 Mistakes were definitely made across the weekend and those who succumbed to the pressure included Fabio Quartararo and Alex Rins who made enormous errors. It was more costly for Rins because it renders him unlikely to even compete for the World Championship top step. As a result, Rins will need to utilise the summer break to assess his performance, where he needs to improve and also to learn from his errors. Davide Brivio was livid and you could feel the tension as Rins slid off at high speed and in the gravel trap. Disappointment is an understatement although the ride by Joan Mir was a nice reward for Team Suzuki Ecstar to enjoy in amongst the chaos.

AR42: “I lost a podium today. My feeling with the bike was really nice and I tried to get into second place as soon as possible because I felt that my rhythm was strong. Unfortunately, I lost the front on a fast right-hander, I entered into it just a couple of kilometres per hour faster than usual, and that’s why I crashed. It’s a shame because it’s my second DNF in a row, but I still feel positive because my pace has been good recently and I know I can get good results again when we come back after the break.” 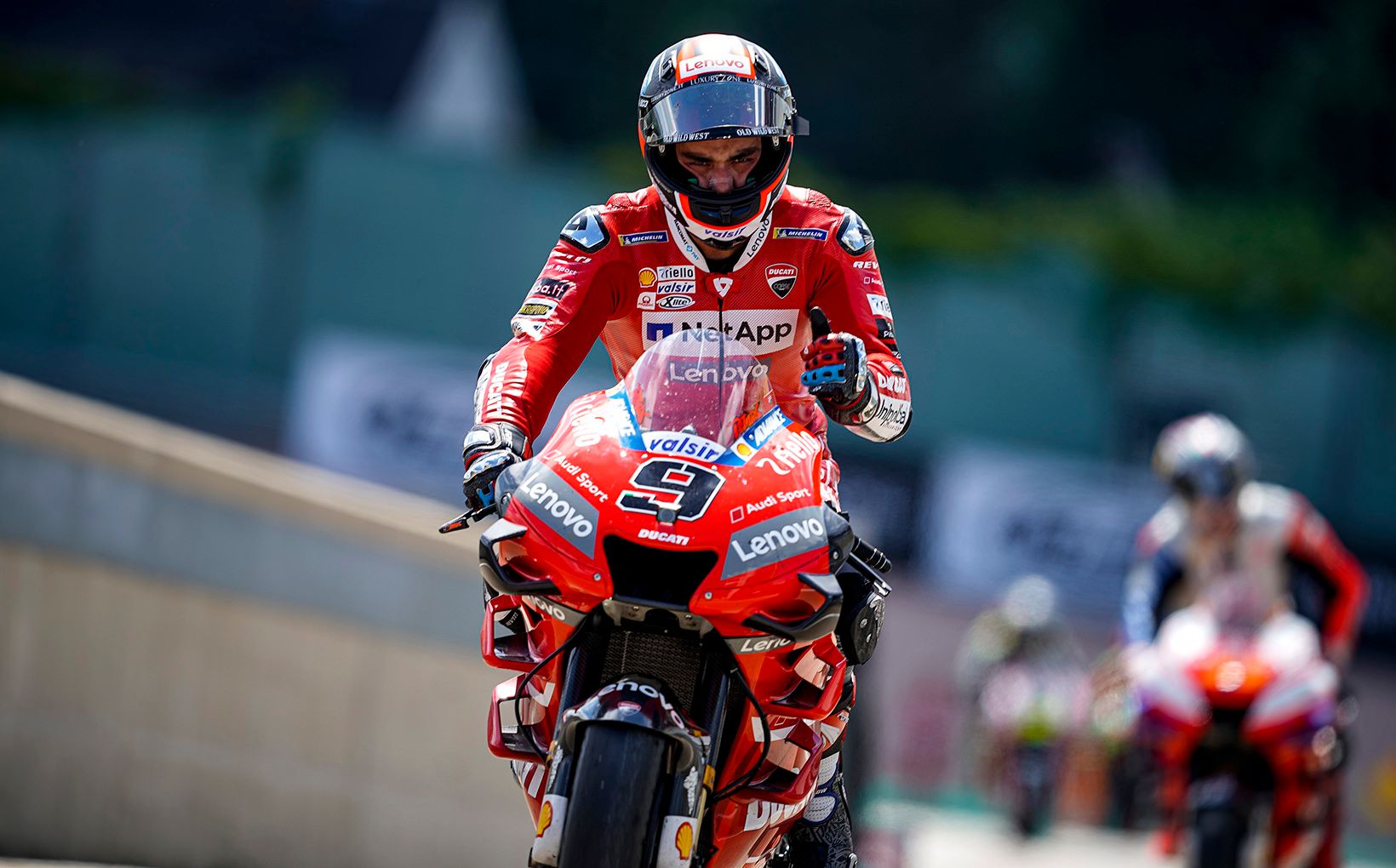 As others learn to manage the pressure, it was great to see the battle between the Ducati riders with Andrea Dovizioso, Danilo Petrucci and Jack Miller swapping positions. The battle did not showcase any team orders which was nice to see and instead the riders battled cleanly with no penalties or damage. DP09: "Today we did our best, making a strong comeback to finish fourth and take home important points for the championship. It's been a complicated weekend, but fortunately yesterday's crash didn't particularly compromise our performance during the race. I was able to get off to a strong start from twelfth place on the grid and I immediately recovered some positions, then I simply tried to manage the rear tyre in the best way possible. It wasn't easy to hold off the other riders of the pack, and once again I had a fun battle with Andrea and Jack.” 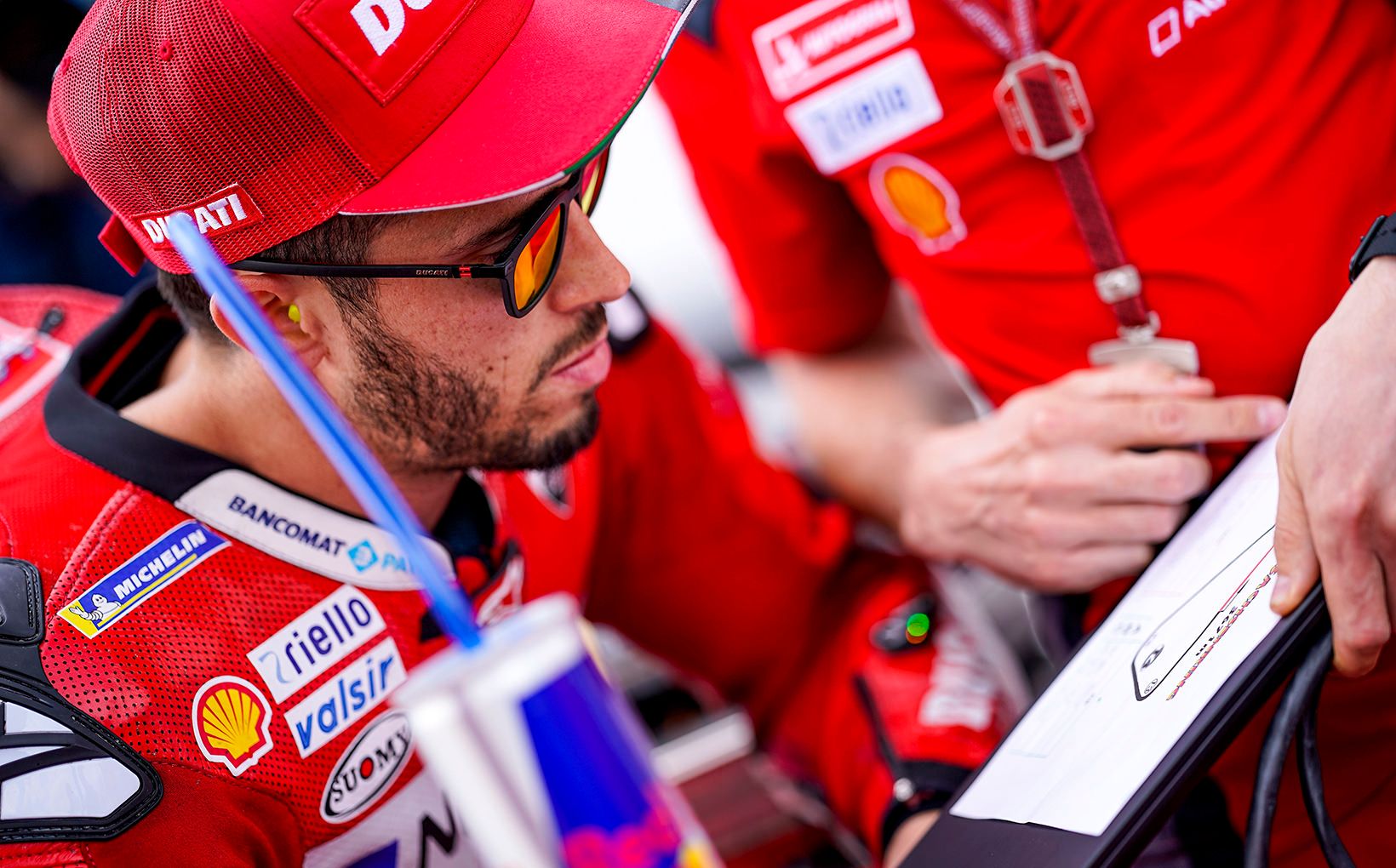 The feeling for DesmoDovi was not ideal considering his teammate once again beat him and losing a considerable amount of World Championship points. The persona of the Italian Stallion of late has been quite negative and abrupt. This is not the usual Dovizioso, so the summer break, will be a very important time of reflection, relaxation and preparation for the remaining races of the season. AD04: “We're still second in the championship despite the bad luck we had in Barcelona and the issues we encountered in the last couple of races. For sure we won't give up and we'll try to put this short break to good use and find some new solutions to be more competitive, starting from next round at Brno.” 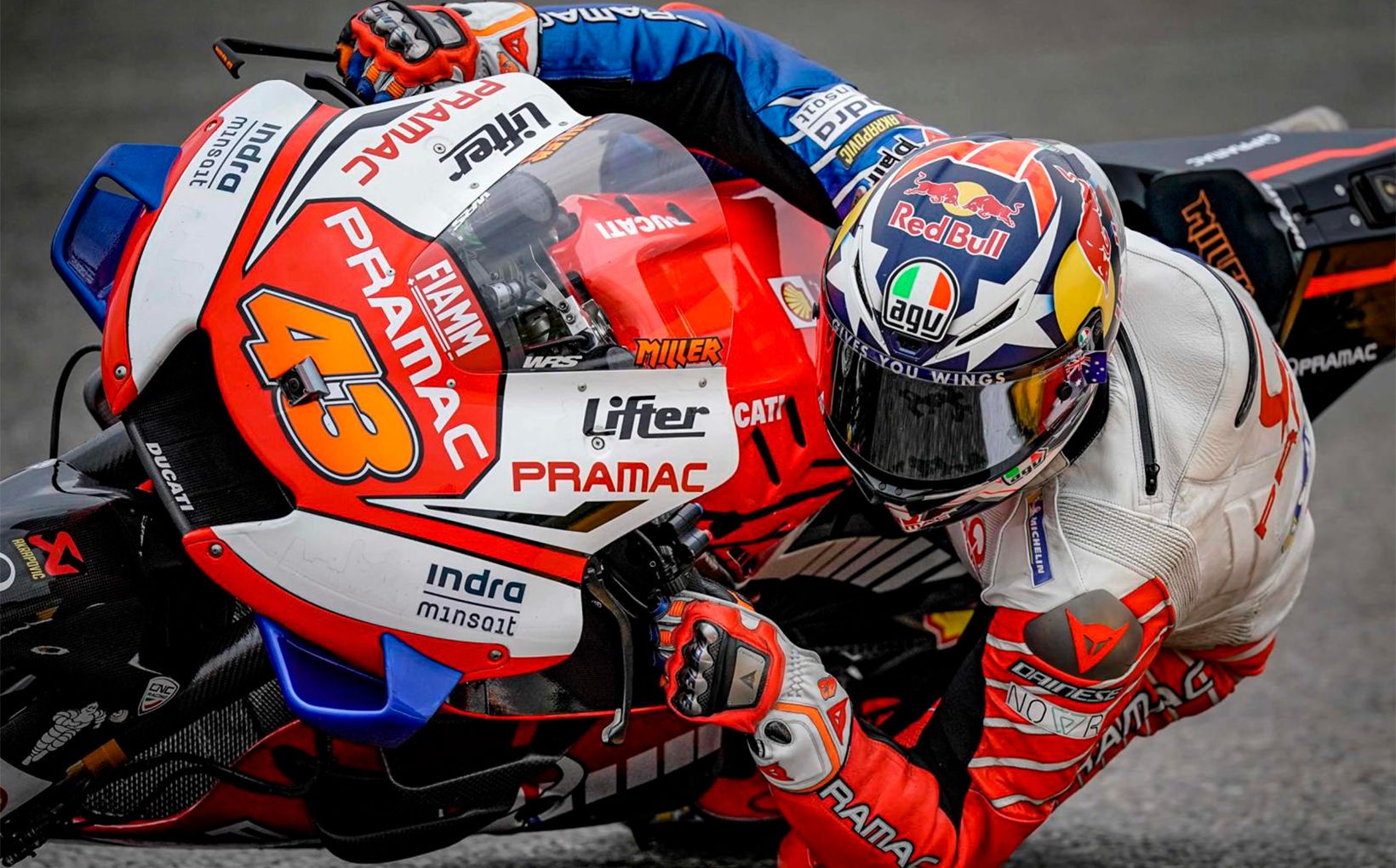 Australian rider Miller was a tad conservative at the Sachsenring which an interesting tactic to stick to considering his usual style of being aggressive. JM43: “To be honest, I thought I could do better. I had the pace to attack the two official Ducati on the last lap but in the end, I preferred not to make mistakes and take home important points that allow me to go on holiday as the first Independent rider.” Could this be a decision to cement his career at Pramac for an additional year and then step up to the factory Mission Winnow Ducati seat? What are the thoughts of the Australian public out there…? Could Miller have done more or was it way more important to just finish with essential title points! 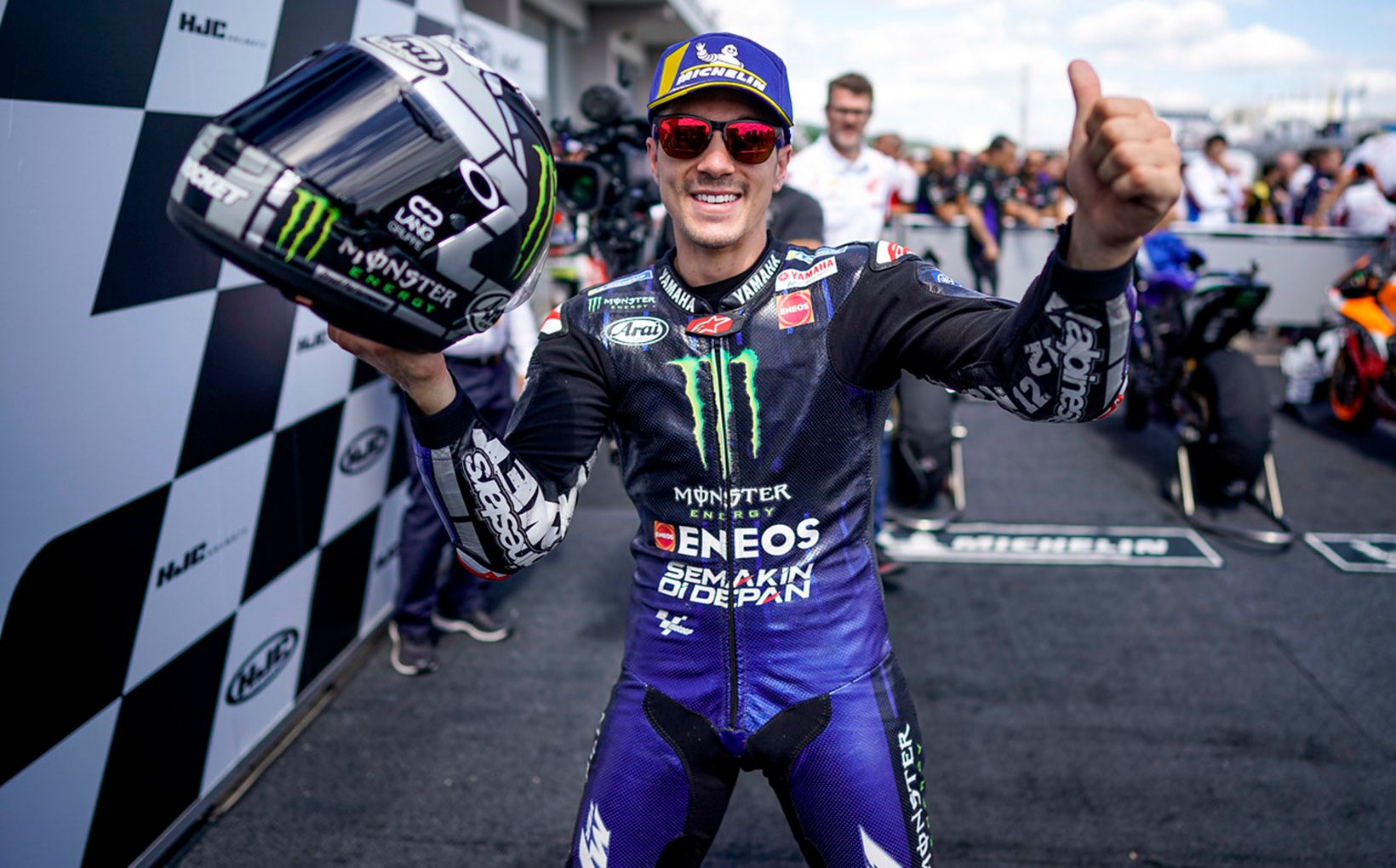 In comparison, since Vinales has found his groove, the Monster Energy rider is smiling, happy and pushing his Yamaha to places people thought was not possible. Vinales has worked hard with his team to change things around and the effort by all is worth clapping about because it has enabled serious growth over a couple of races. MV12: “We discovered quite early this weekend that second place might be the best we could do here, so with that in mind we achieved the objective. For us it's really good, second is my best result here. I started well, I did a good first few laps. This result means a lot, it prepares me for Brno. I'm really happy, we understand the way to go. Yamaha is working in a good way, and I know our strong and weak points. It's good that we have a summer break to improve the bike and improve myself. The tyre choice was very difficult, I took a gamble with the hard because I worked most of the time with this tyre. It was on the limit if I could or could not finish the race, and I said to myself 'If I need to slow down in the last ten laps, I will, but I will be at the front'. I'm very pleased for Yamaha, it's very important to get a consecutive first and second place. I saw Cal on my pit board the whole time and for about fifteen laps I closed every door. I worked very hard on making sure he couldn't overtake me, because I knew if he did, he would go. Luckily I was second, so I'm very pleased and happy. I can't wait for Brno to try out the new things and see if we take a step.” 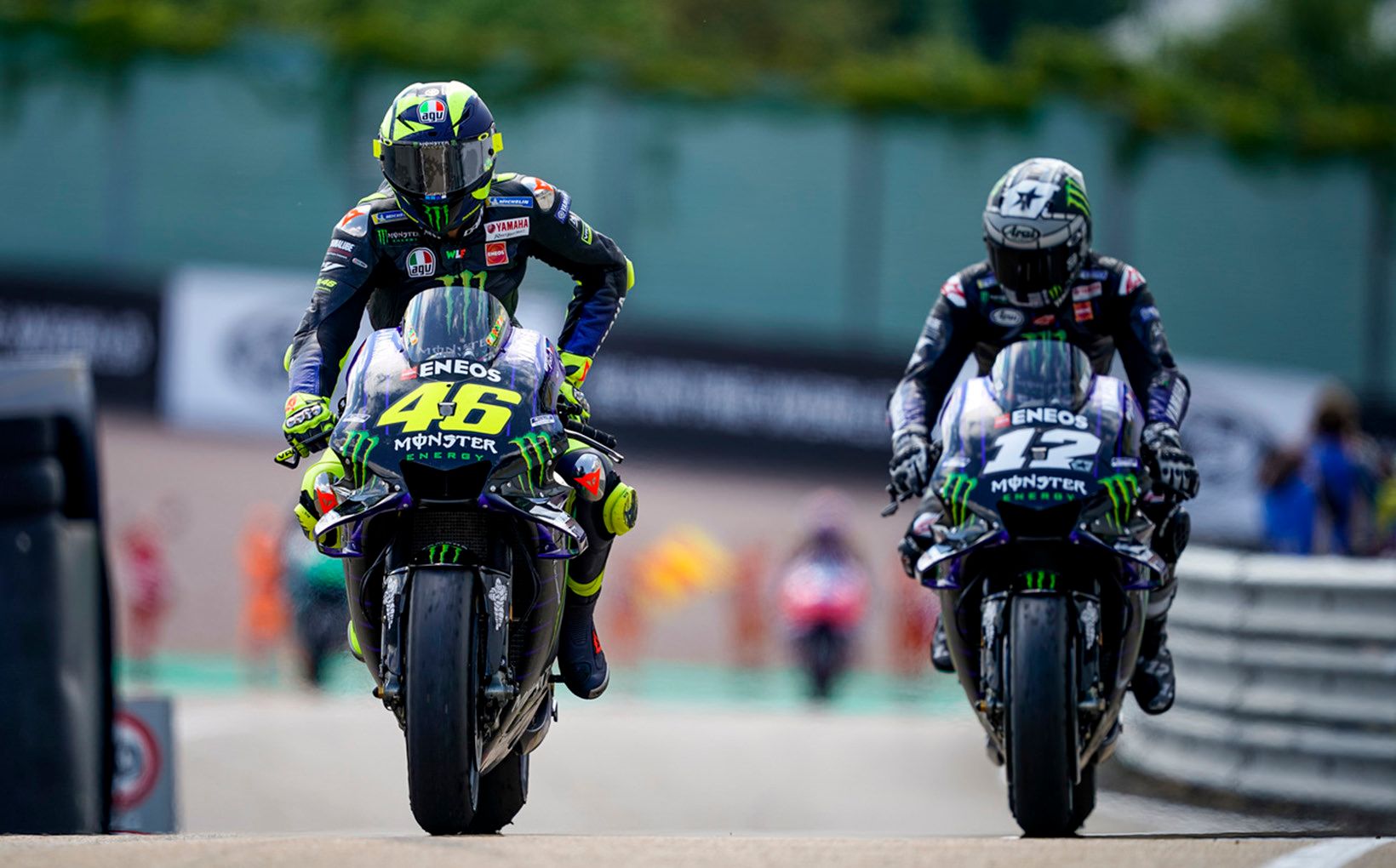 Unfortunately, the same is not able to be said for Valentino Rossi who just looks stuck and tired of failing. The Doctor…. Will definitely need the summer break to reset, figure out what to do and also find a way to be competitive. It is crucial otherwise the result books will show many reasons for a shock retirement decision. Of course, Rossi brings in fans and this is a reason to continue riding, however, for how long can he be down the back of the grid time and time again. Vinales is ecstatic and Rossi is sad. Changes have to be integrated at a rapid rate in order to allow the main Yamaha team to shine in amongst a competitive list of manufacturers and riders.