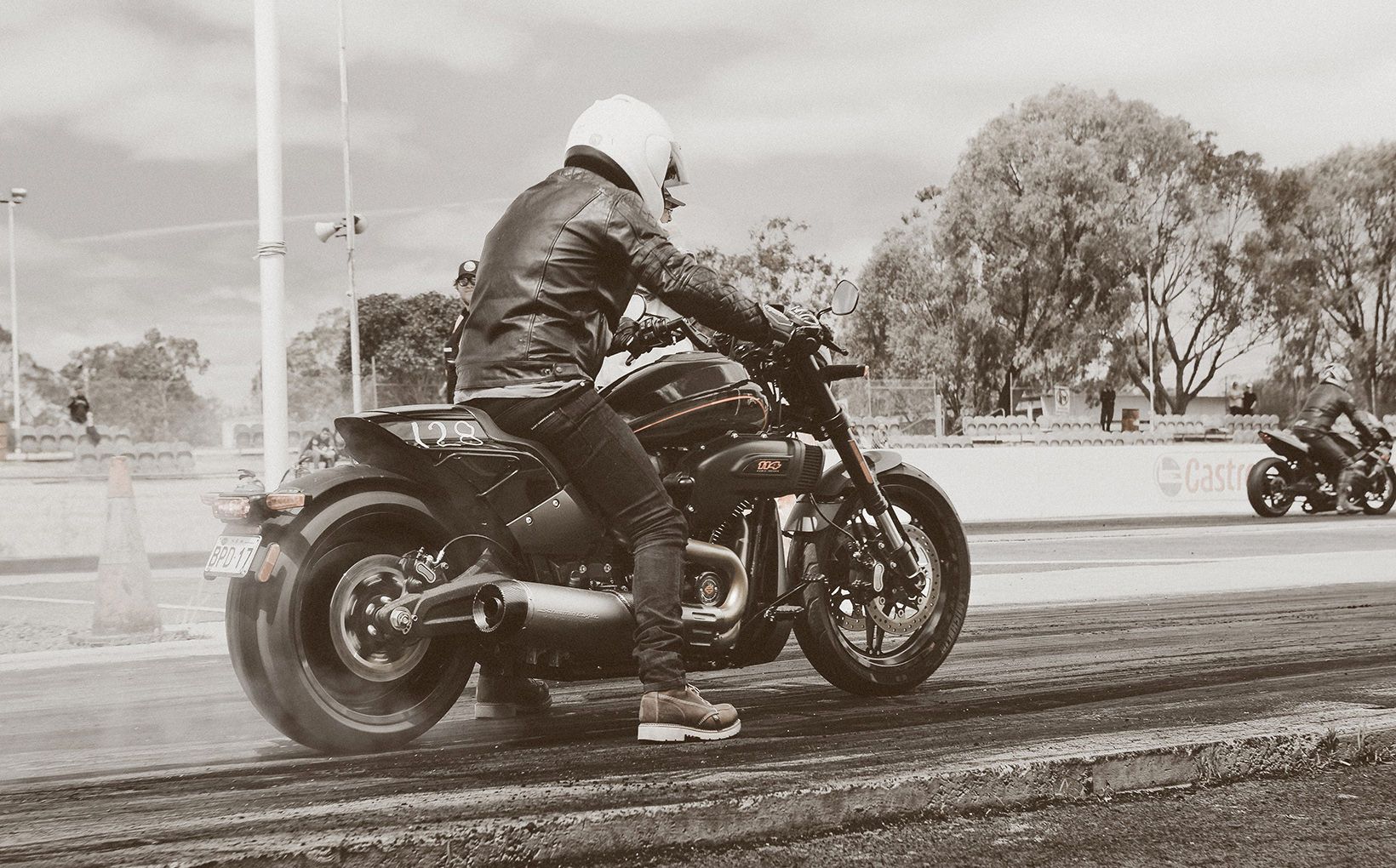 There’s no doubt about it, the FXDR is fast. A quarter-mile time of 11.83 is quick for any motorcycle, but even more so for a near-standard bike weighing 303kg. Much of the FXDR’s impressive drag times come down to its big, fat back tyre that just grips and goes. Turns out there’s function to its form after all.

In the FXDR, you’re looking at an overt drag-bike-inspired powercruiser that picks up where its super-popular, super-chrome Breakout sibling leaves off. It also fills the gap left by the popular V-Rod, which is as close as it gets to a spiritual predecessor.

in for a treat because it now has a rideaway of $32,495 – $3000 below its 2018 launch price – which makes it cheaper than the Breakout too ($34,250). So if you like the stretched-out cruiser and its big back tyre but want more performance and less chrome then look no further than the FXDR. 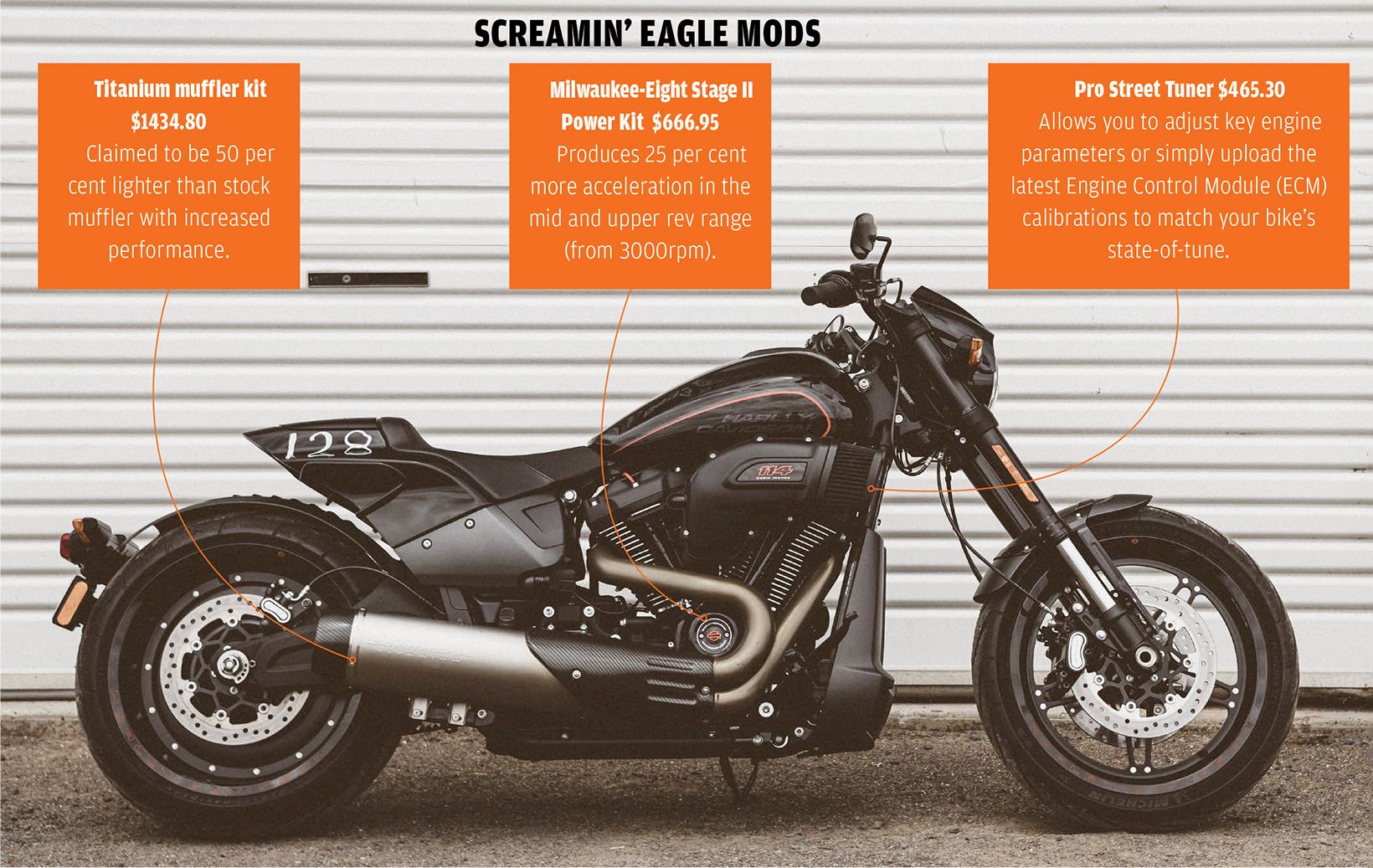 There are plenty of similarities and differences between the Breakout and FXDR. Both bikes have the same raked-out front end, a fat 240-section rear tyre, forward controls and are powered by the big Milwaukee-Eight 114. But that’s where the similarities end because from there, the solo-saddle FXDR breaks away with upside-down forks and twin discs from the Fat Bob for sharper handling and a 19-inch forged aluminium front wheel instead of the showy Breakout’s 21-incher. Ground clearance is up 25mm over the Breakout (140 vs 115mm) and the wheelbase up 40mm (1735 vs 1695mm). There’s also an extra 5Nm and an air intake that proudly sticks out like dog’s balls. It’s even got clip-on handlebars, which aren’t uncomfortable. The FXDR also introduces more aluminium throughout the bike for some decent weight savings. An aluminium swingarm is said to be 4.6kg, or more than 40 per cent, lighter than the conventional steel item (6.25 vs 10.8kg) as found across the other 10 Softail models. There’s also an aluminium subframe and mudguards, which are said to save a further 3.2kg. We’re still talking about 303kg wet here. 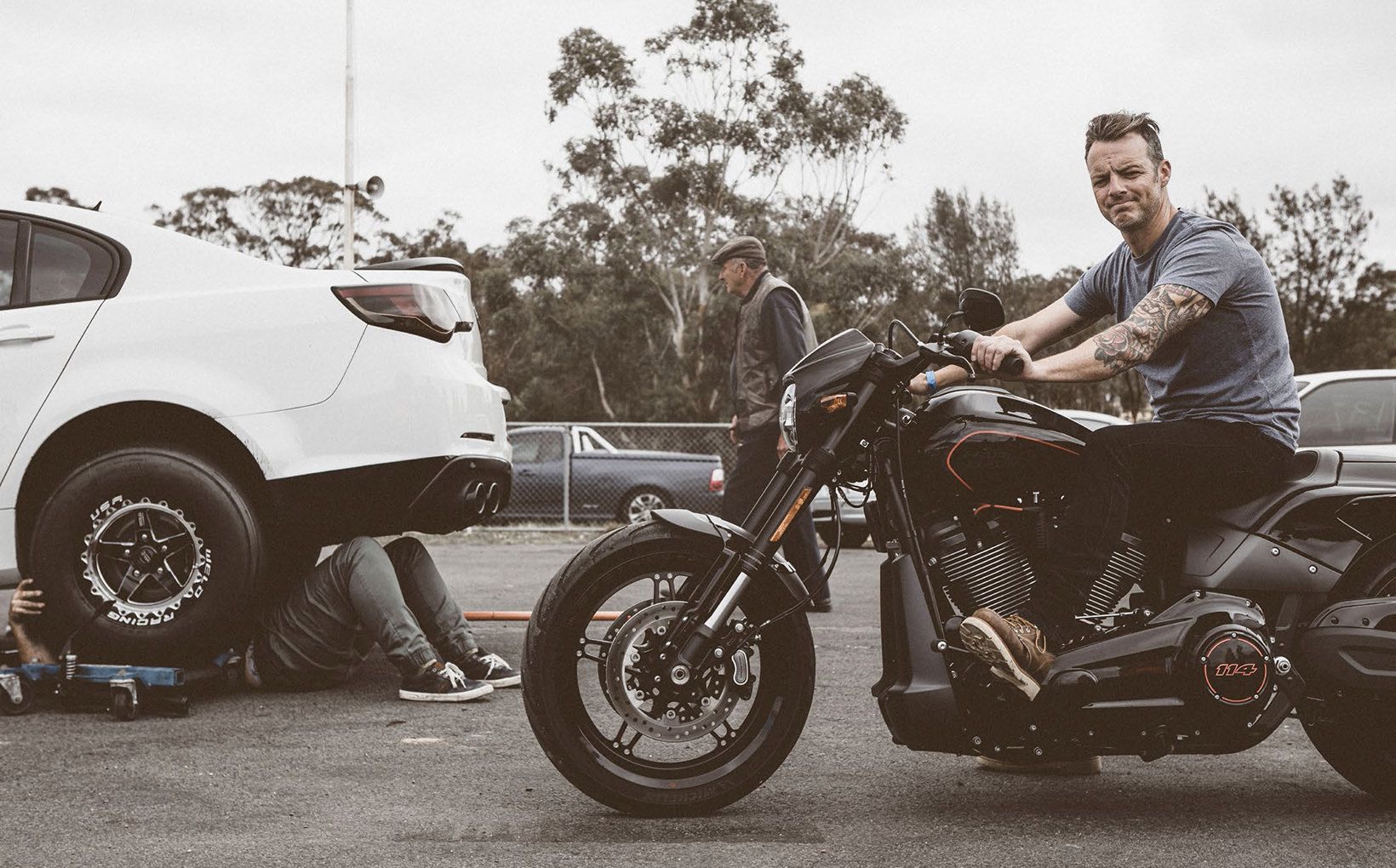 If it was mine, it’d be a case of rear ’guard off, reflectors off, loud muffler on and straight to the pub.

The FXDR looks huge, and is huge. It’s heavy and cumbersome at slow speeds but, once rolling, it corners surprisingly well. For such a big, long bike, it offers a heap more cornering clearance than you’d expect, and a lot more than the Breakout. In fact, not once did I scrape the ’pegs, no matter how much I tried, especially on more open sweepers.

It handles mid-corner bumps reasonably well – much better than other Harleys I’ve ridden, which typically get upset when you hit bumps on the side of the tyre. In these circumstances, Harleys tend to want to stand up, but the FXDR doesn’t and tracks nicely through the turn despite the width of that back tyre.

But let’s not kid ourselves. The FXDR is best suited to short jaunts than longer days in the saddle thanks to its limited rear suspension travel and forward controls, which mean your butt and lower back will take a beating. But for shorter rides and smooth roads, it’s fine.

When it comes to people’s opinion, the FXDR also takes a beating. The orange touches, like the graphic etching on the wheels, look really trick, and that solid-disc back wheel looks horn, so the bike certainly stands out. But there’s no hiding some poor attention to detail. Our test bike had weld peppering around the headstock – front and centre of your view – which is simply shithouse. It’s impossible to miss and shouldn’t have left the factory. This is a $32,500 bike after all, and Harley needs to lift its game here.

Now back to the good news. 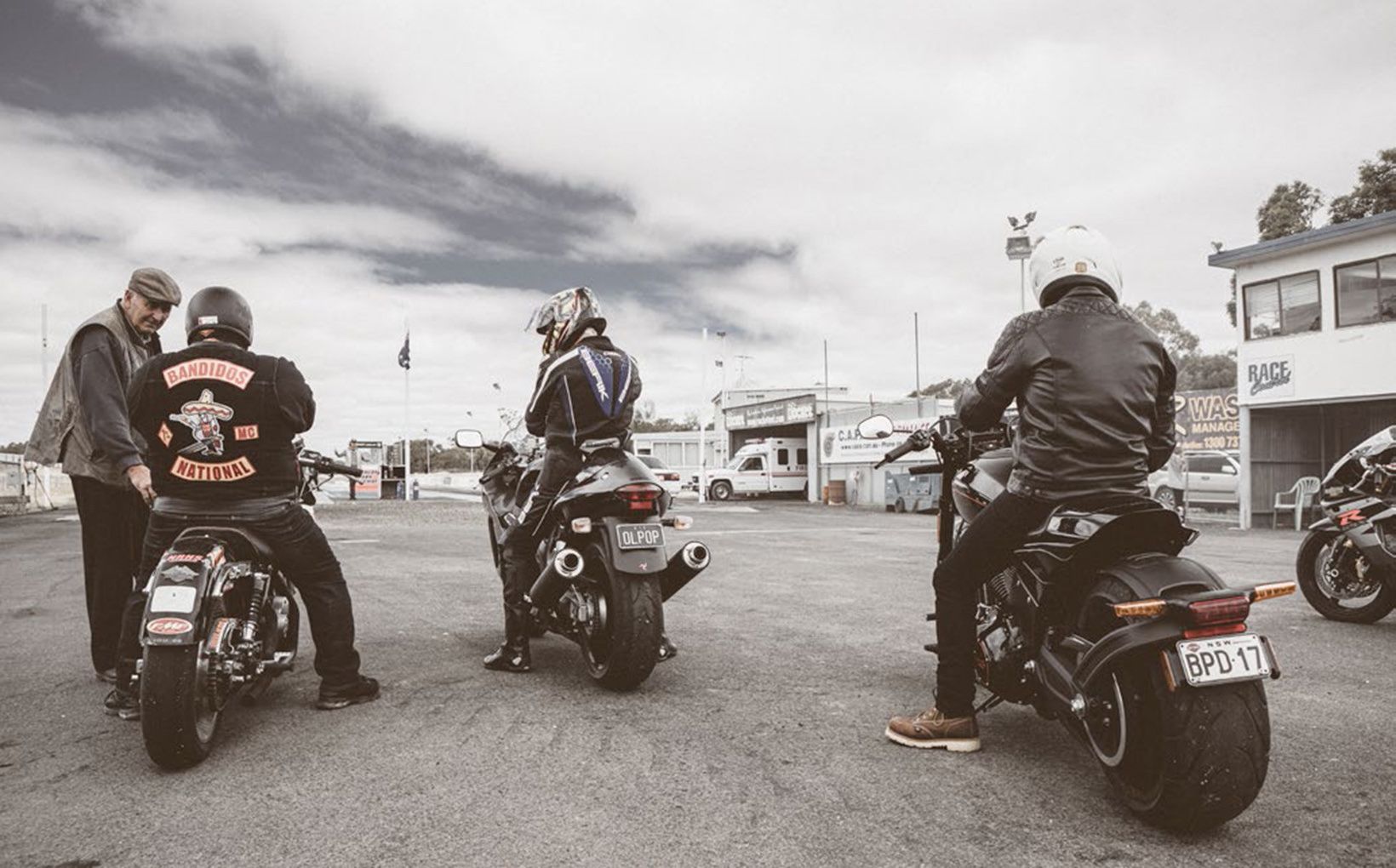 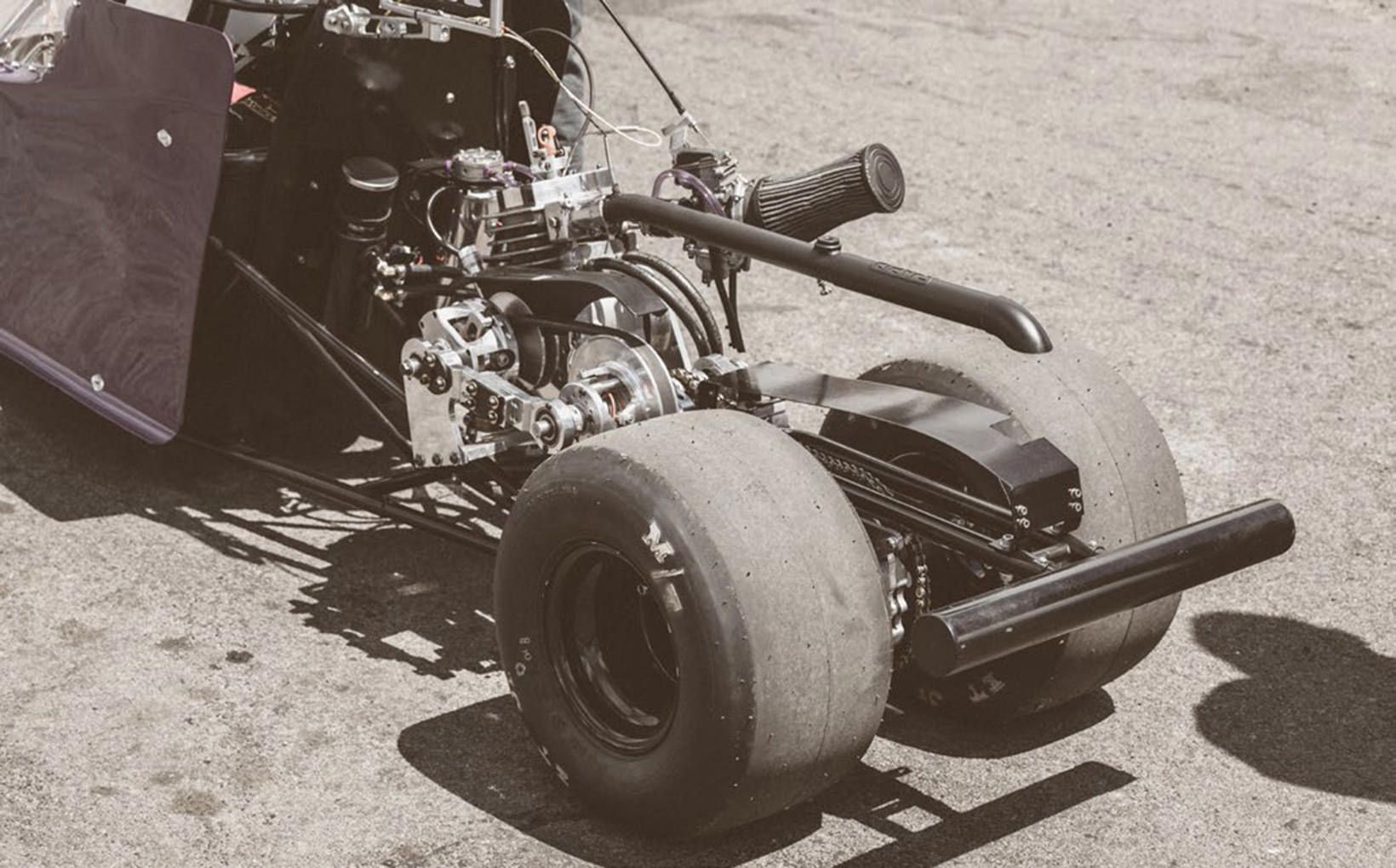 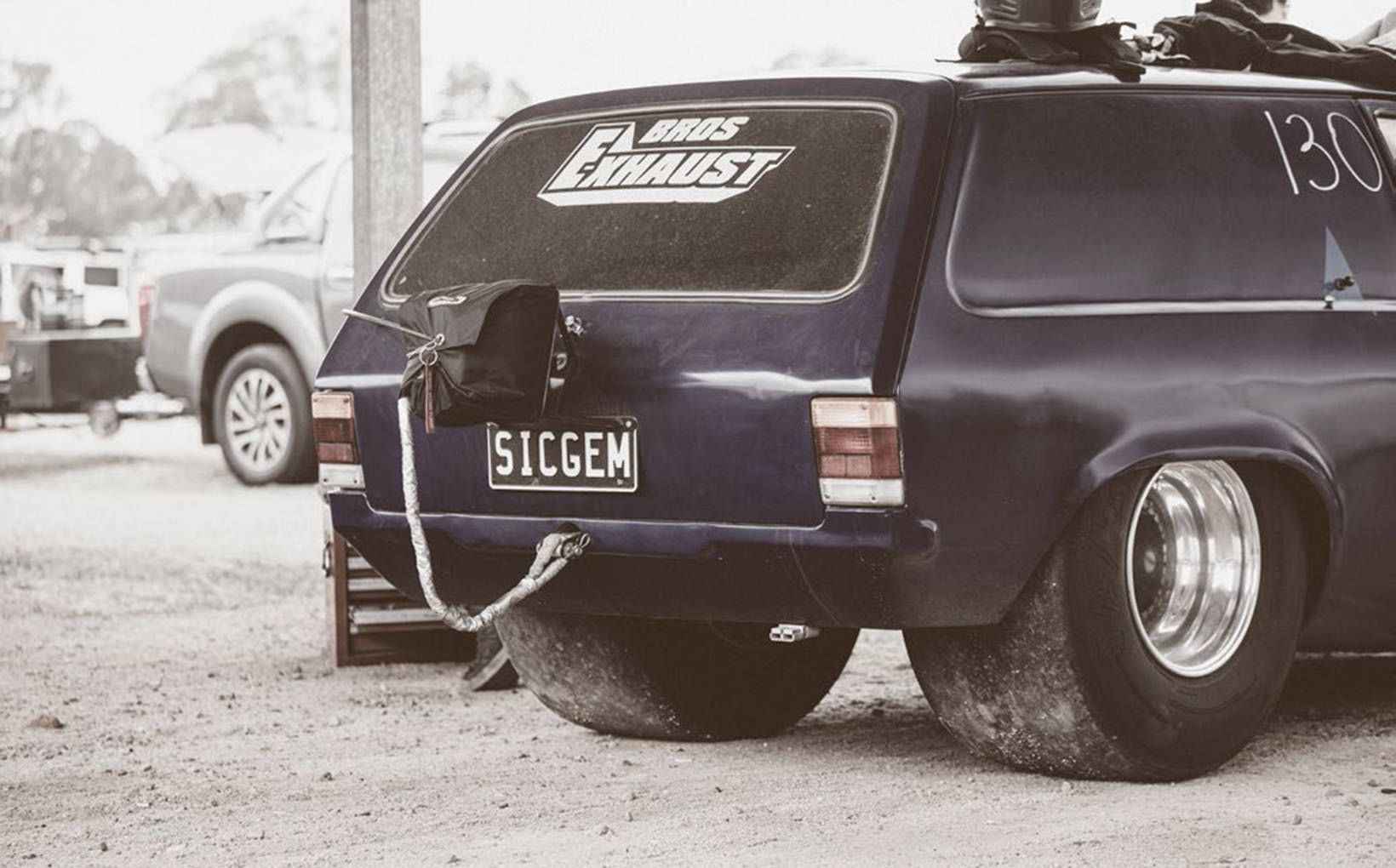 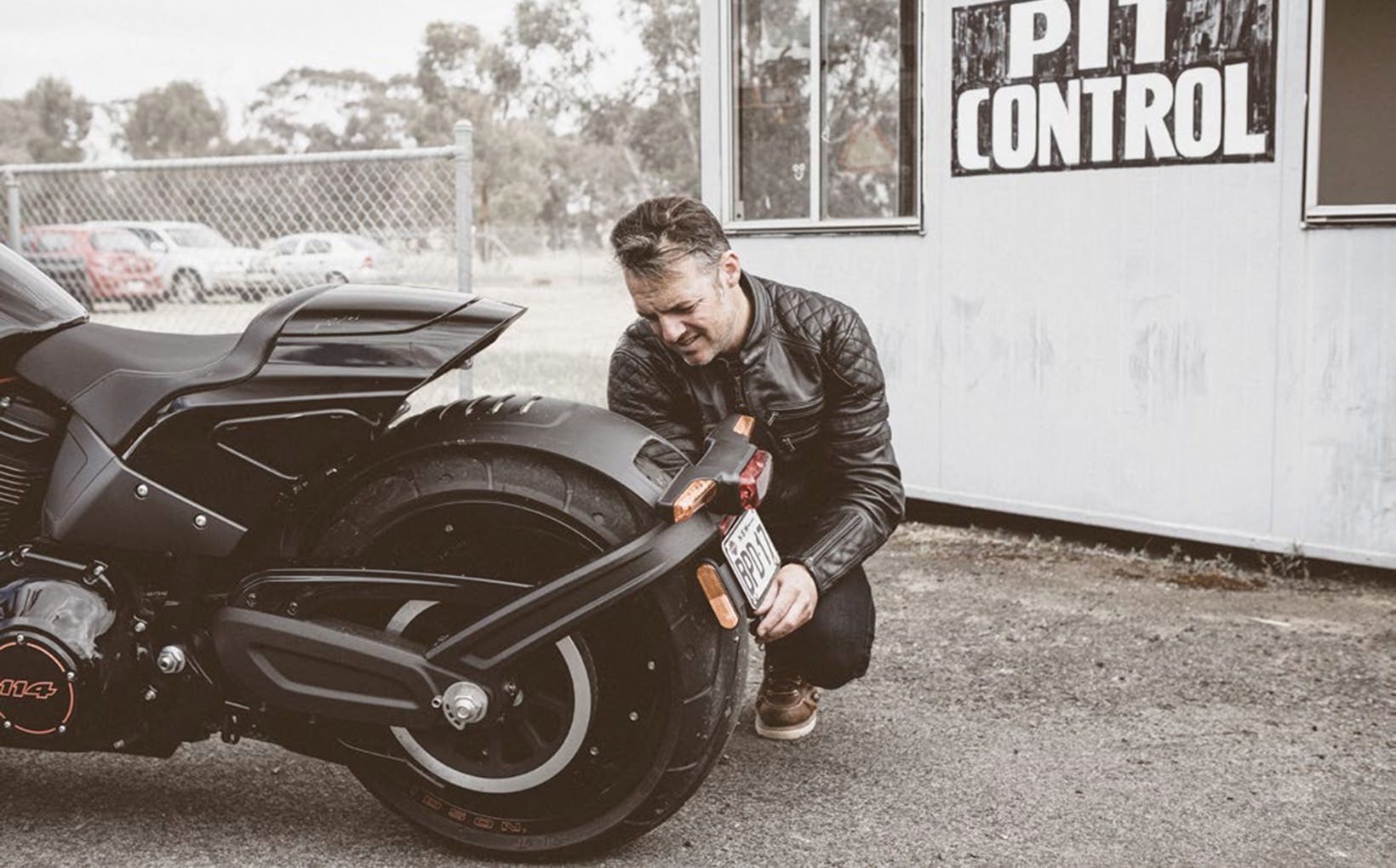 This is my first taste of the Milwaukee-Eight engine, so I didn’t know what to expect. The 114 version is a torque monster. At 1868cc, it’s almost hard to believe the size of the pistons. The resulting 160Nm at 3500rpm delivers awesome grunt. Just feed it gears and let it drive. It sits on 100km/h at about 2200rpm, which is barely ticking over. It’s such a flexible engine that happily revs out.

But then there’s that pipe.

You buy a Harley-Davidson for the look, sound and feel, but that optional Screamin’ Eagle exhaust doesn’t add much bark for the bucks. You need to make noise when you’re on a Harley – you’ve gotta hear that engine. The problem is testing a Harley-Davidson isn’t representative of the real world where bikes rarely roll out of the showroom without an upgraded air intake and exhaust. Our test bike had a few bells and whistles on it, including a Stage II Power kit and Pro Street Tuner (see breakout for details), which took rear-wheel power from 79 to 100hp, but the big Milwaukee-Eight 114 was still muzzled.

If it was mine, it’d be a case of rear ’guard off, reflectors off, loud muffler on and straight to the pub.

Before heading to the strip, I figured it’d be wise to chat with experienced drag racer, Harley guru and my good mate Denis Ackland who featured in MT’s Shed Masters series three issues ago.

When asked how he thought the FXDR would go, Denis answered with a question: “How much horsepower and how much weight we talkin’?” This one’s got about 100hp and she weighs 303kg.

I’ve only been to the drags a few times, so I also asked Denis for some tips.

“Do a good burnout and get some good heat in the tyre. Do it in second gear, which won’t be too hard on the clutch,” he said. “Wheel it through the water, grab the front brake, valve bounce it and dump the clutch. Give it a heap of revs and just get that clutch out. You’ll damage the clutch by pussyfooting around – just get it out then get it in. Give the bike at least 30 minutes between runs to allow the clutch to cool, too. That’s the best way to make the clutch last.” 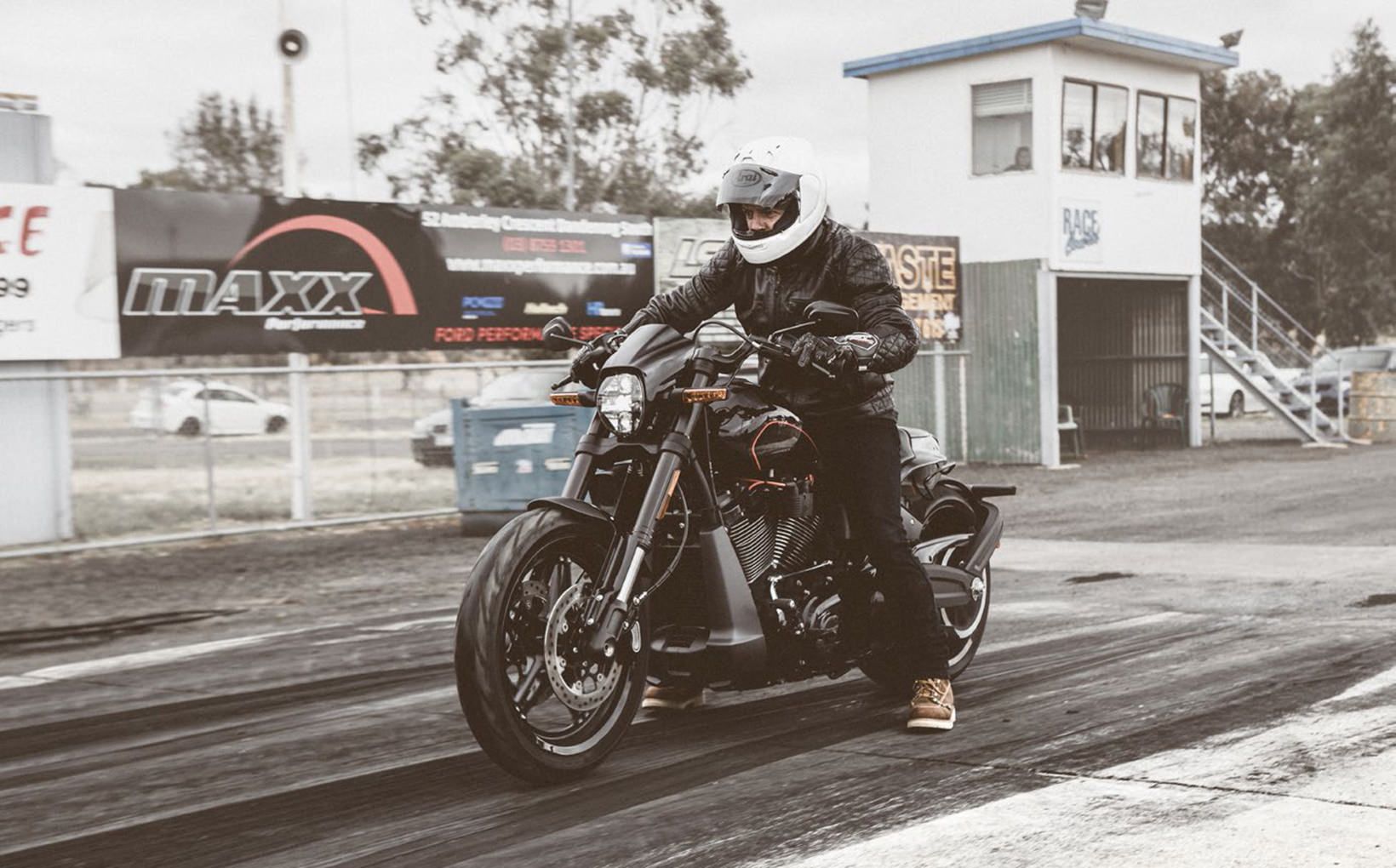 I was a bit nervous the first time on the burnout pad as I dumped the clutch in second, and watched the big, back tyre light up beneath me.

As I rolled to the start line, I recalled Denis’ next tip: your clock doesn’t start until the light beam reconnects – not when it breaks. That means you don’t need to destroy the clutch by feeding it out.

In first gear, bring the revs up slowly. Do your first start in lower revs and add rpm with each run.

With anywhere between 2500 and 3000rpm with each start, I’d add a bit of rear brake, take up the slack in the clutch, edge forward, watch the lights, and go. Get the clutch out and get the power on. 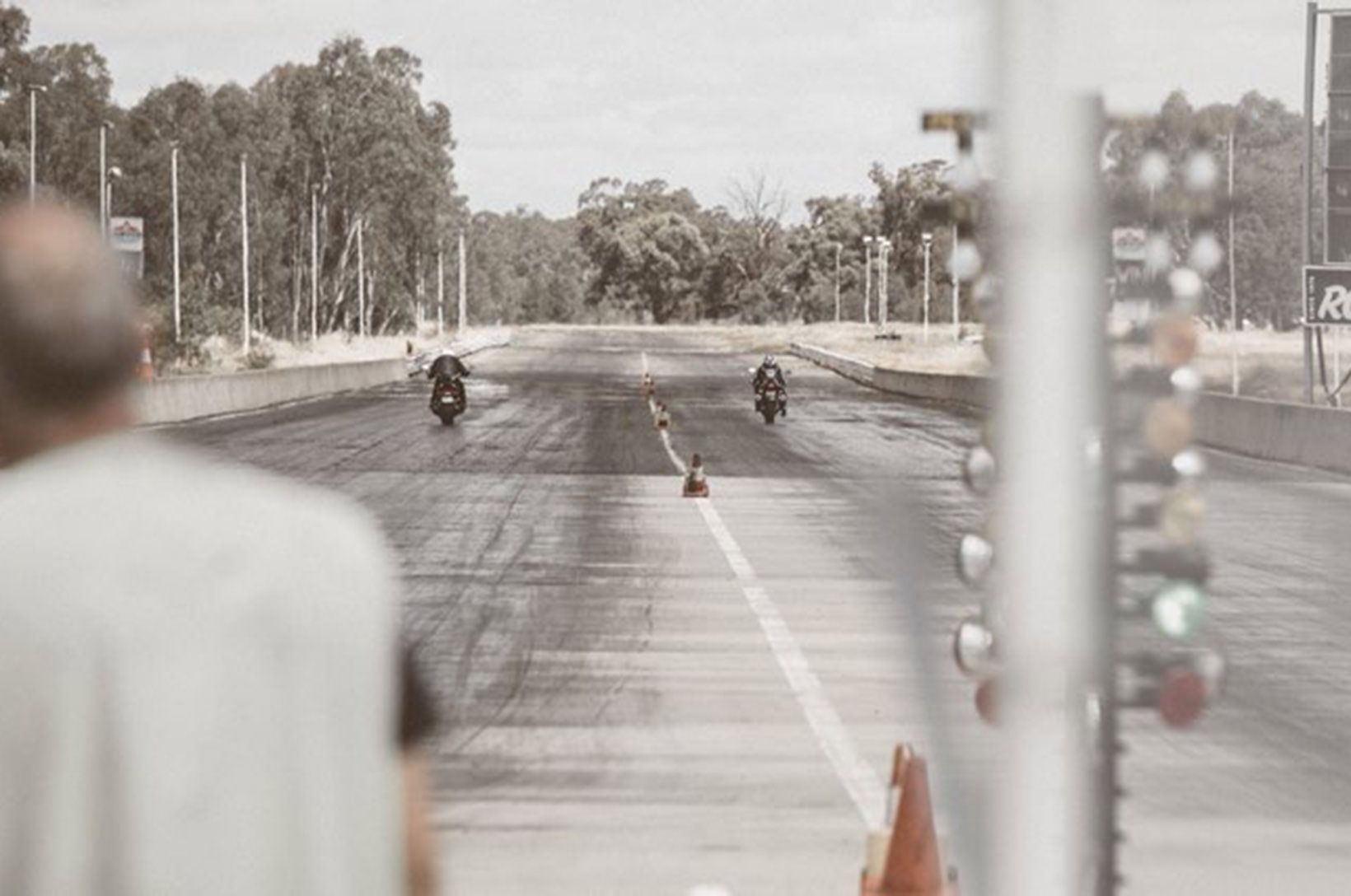 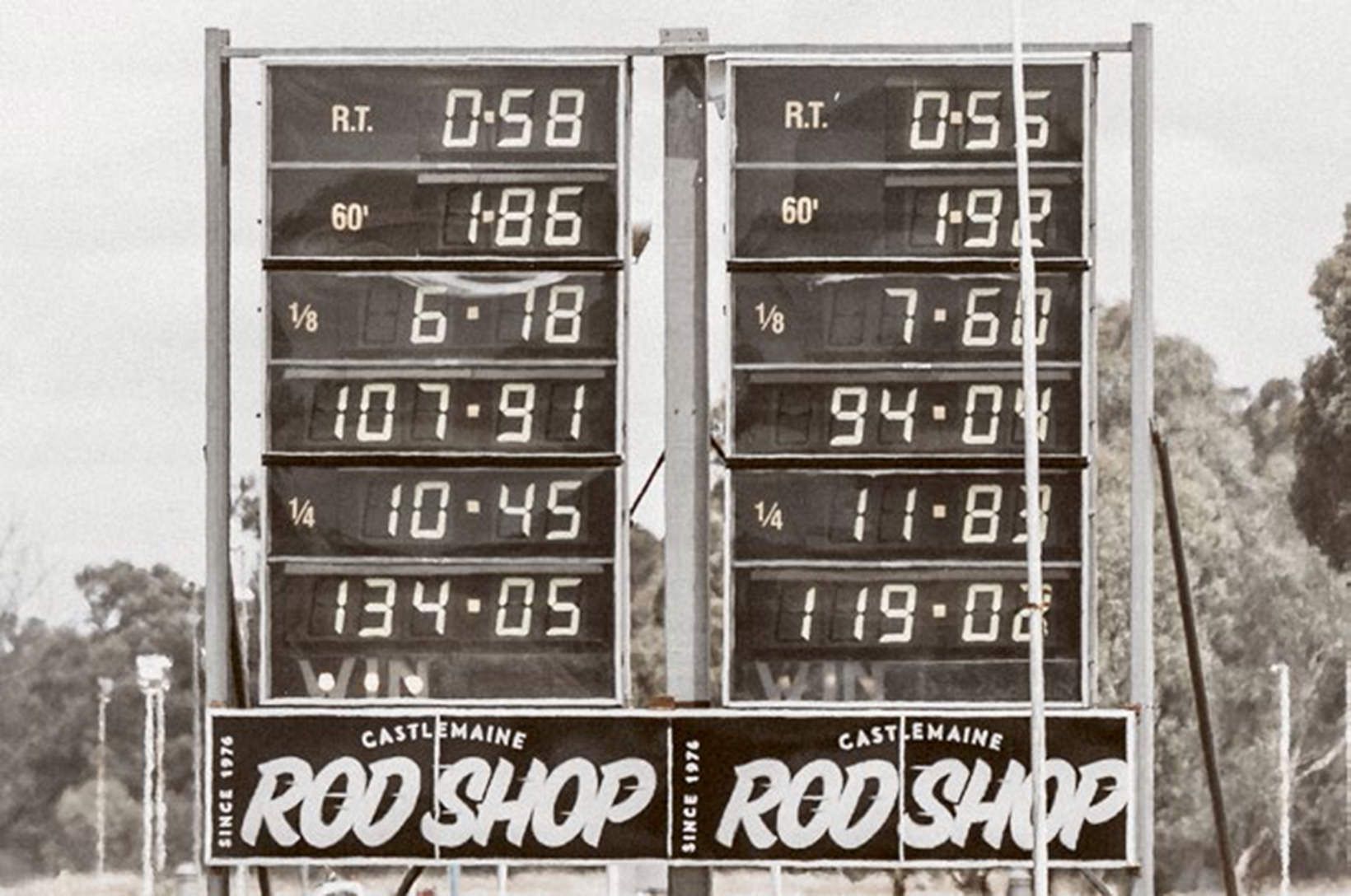 The timing display shows Cam’s reaction time (0.56sec); the time to 60ft; time to one-eighth mile (‘half-track’); speed at the one-eighth mile mark and the elapsed time, and speed at the end of the quarter mile. The timing slip provided to competitors has even more information. The time to 60ft is critical to the quarter-mile time. 11.83sec at 119.02mph - ‘‘Not bhed’’.

Thanks to that big, hot back tyre, the FXDR gets awesome grip off the line, and next to no wheelspin compared to, say, those GSX-Ss we took to Calder Park a few years back.

Once moving, it was all about short-shifting into second. I over-revved it a few times instead of shifting up at around 5200rpm because, against the roar from other bikes, it’s just too quiet. A shift light would’ve been handy. There is a tiny digital tacho, but it’s pretty much impossible to read when you’re going flat-out down a dragstrip.

As far as tyre pressures go, we started with about 38psi in the rear and went down to 24 then 18.5. One of the drag boys suggested going as low as 14psi. Dropping to 18.5 helped and gripped the surface a bit better, but the FXDR gets great grip anyway, without wheelspin. It’s a heavy motorcycle – there’s a lot of weight on that back tyre – so there’s an awesome amount of launching performance.

I played between winding it out in fourth and shifting up into fifth because the Harley gearbox has a very slow gearchange with a big, long throw. No blipping the throttle and upshifting without the clutch here. You’ve got to pull that big, heavy clutch lever in and ensure it’s a nice, positive shift. 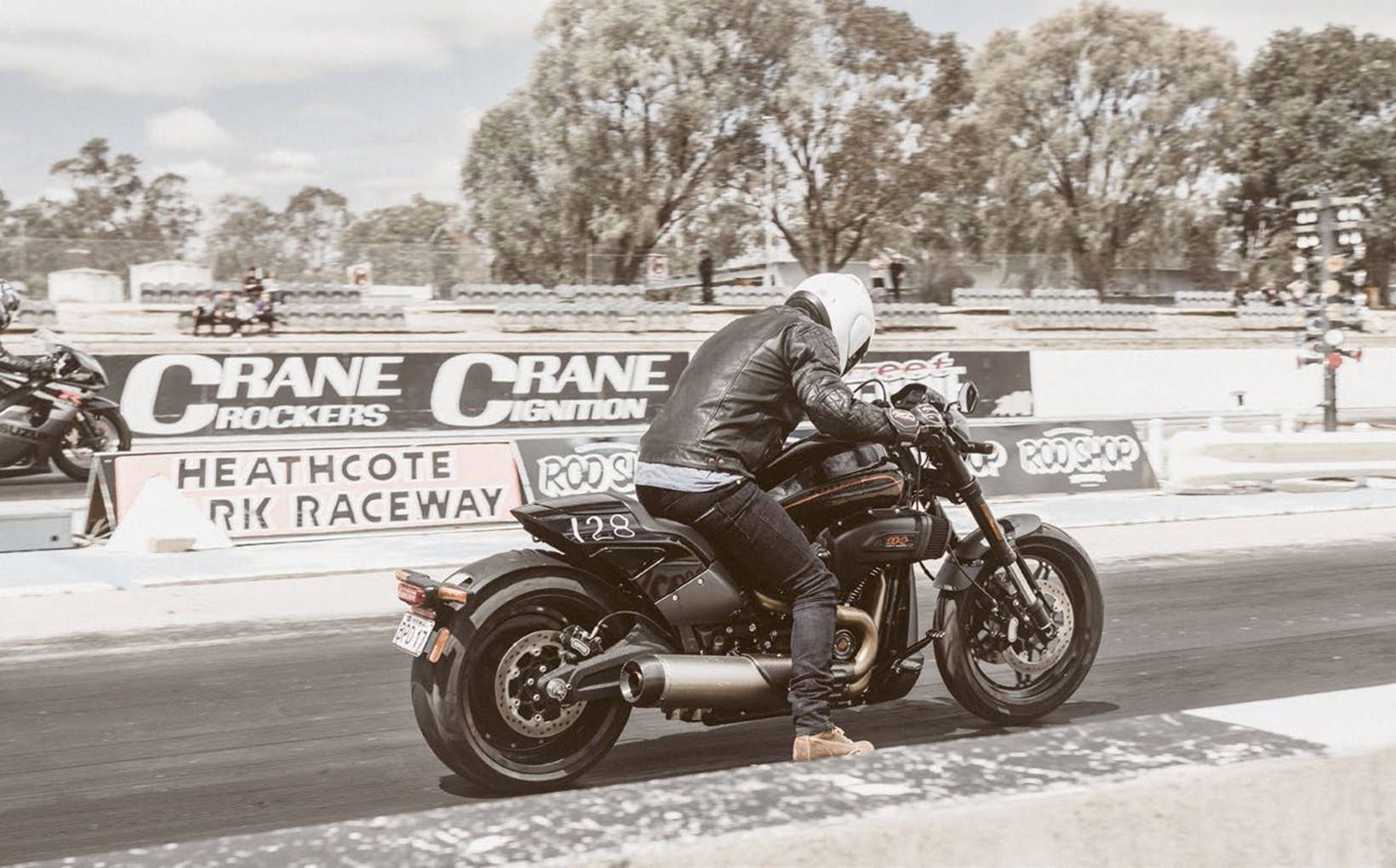 The FXDR is super stable at speed, as you’d expect for a bike with such a long wheelbase. It’s equally as stable under heavy braking, too. Victoria’s Heathcote Dragway doesn’t have a massive runoff when you cross the line, but the FXDR pulls up nice and stable well before the cyclone fence, helped by the twin disc front-end.

There’s no getting away from that riding position, however. At 200km/h on a naked bike with forward controls, you’re nothing but a parachute, and it pulls at you pretty hard.

As a relatively standard bike on the dragstrip, the FXDR is damn impressive. It got off the line well, it was reasonably comfortable, it wasn’t scary and it never got flighty.

The FXDR grew on me as quickly as it took to the drag strip. When I first saw it, I cringed and when I first rode it around the block at slow speeds, I thought it was bloody terrible. Despite that, however, by the end of our affair, I was sad to see it go. Before you put your money down on a Breakout, try the FXDR. It grows on you. Fast.

Protect your Harley Davidson. Call Shannons Insurance on 13 46 46 to get a quote today.