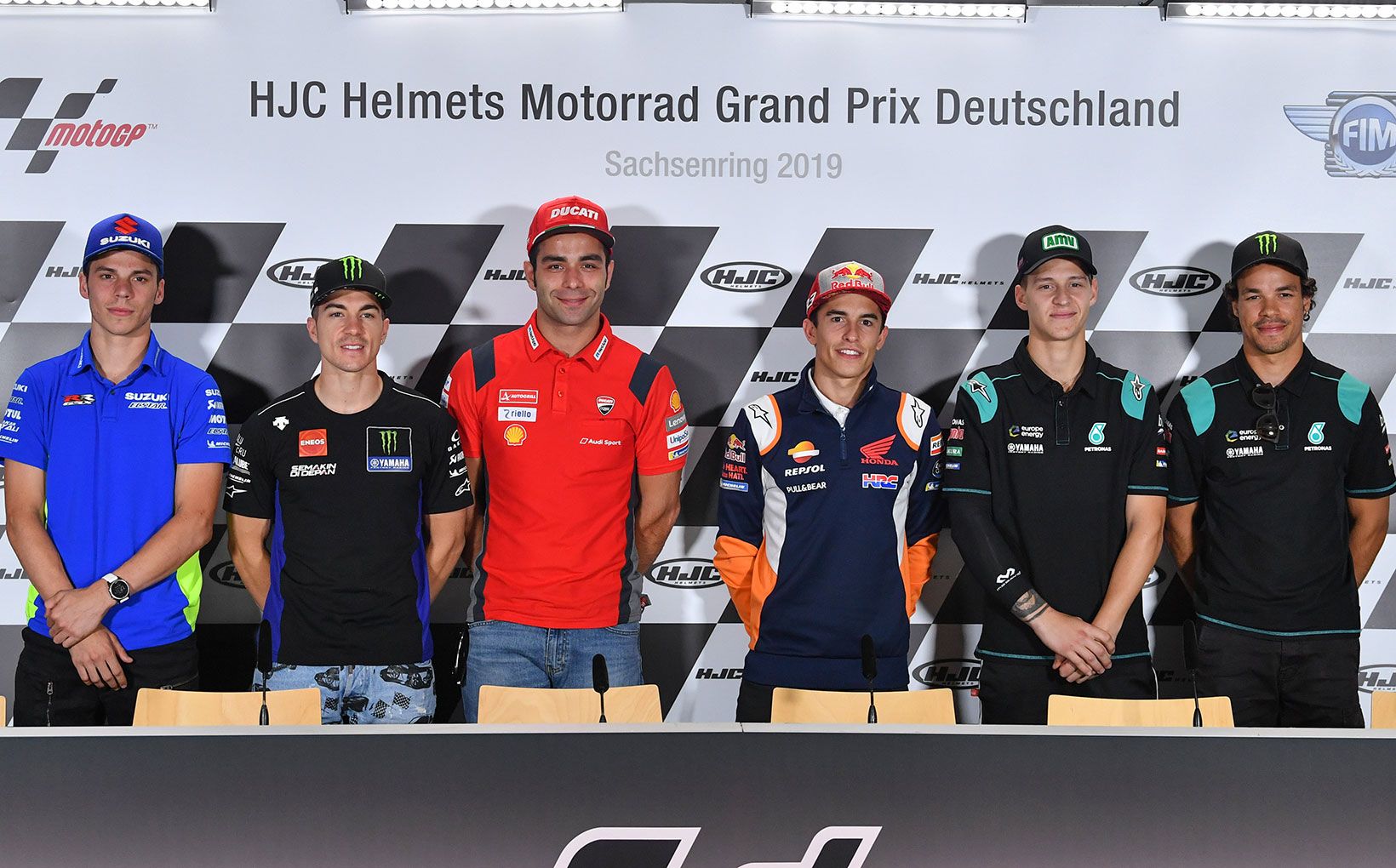 King Marquez of the Sachsenring is looking for further success at the German circuit whilst being very cautious of his fellow rivals who are strong. The favourite to win is Marc Marquez clearly by record books of the previous years, although, in 2019, the season is long and anything can happen. We have seen a rookie take shape and finish on the podium, Alex Rins win on the Suzuki and other riders fall victim to the kitty litter more than they would like to admit. 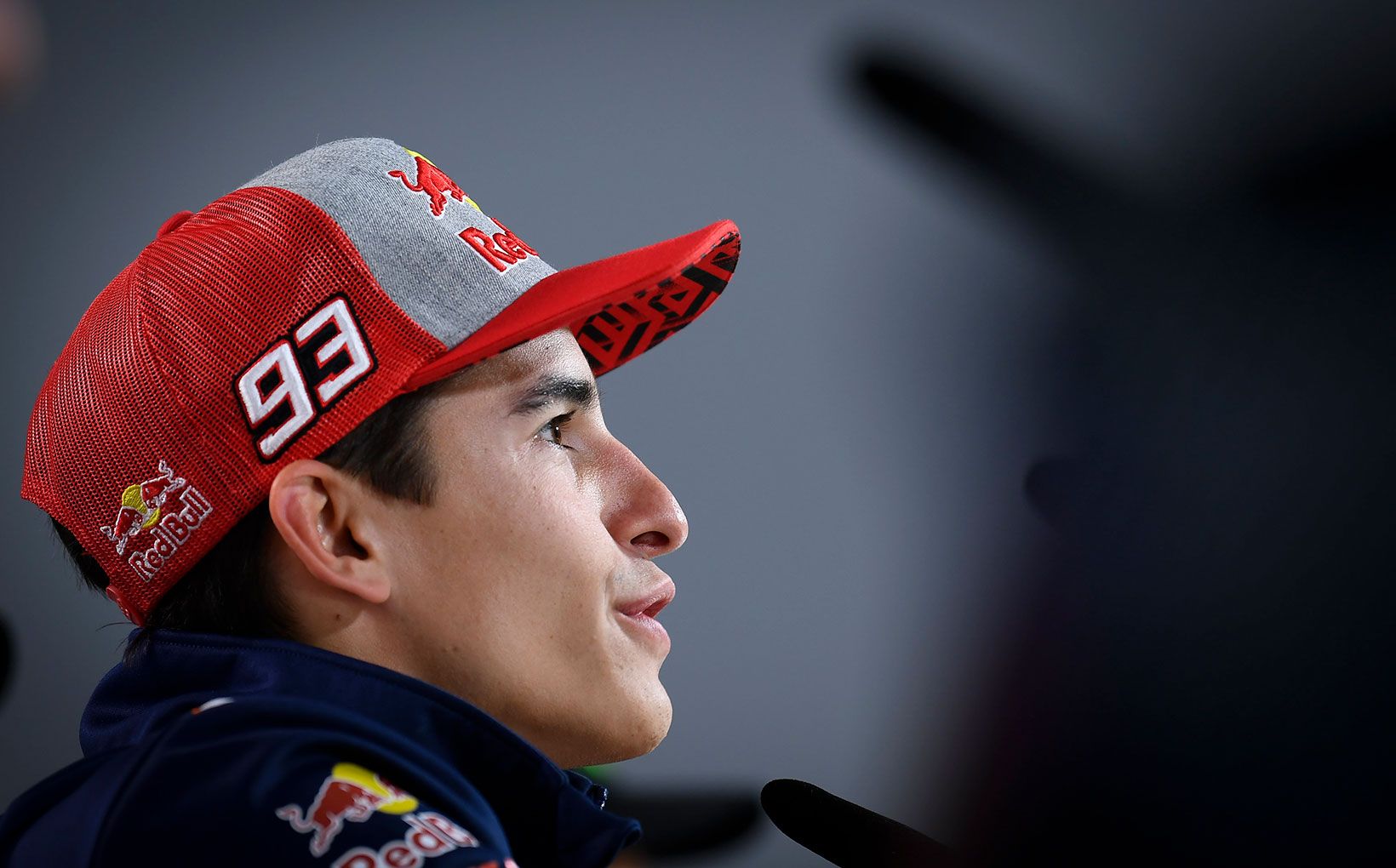 There will be riders in the paddock planting the seed of doubt into Marquez’s mind. Will it work is one thing because mentally he is very strong! MM93: “This sport is unpredictable and everyone said the same in Austin and I crashed. Then we will start just thinking about the weekend as every race.” Fellow Repsol Honda rider Jorge Lorenzo is at home recovering with a body brace and will be back in action soon.

In the meantime, test rider Stefan Bradl will ride the Honda machine and is proud considering it is a home event. Bradl has been vital to the testing program of Honda so it will be intriguing to watch his lines, braking points and confidence over the weekend. SB06: “I'm very excited to join the Repsol Honda Team in Germany. It's a special race for me as my home race, obviously I am very sorry for Lorenzo and I wish him the fastest recovery possible and to come back strong. I am glad to be able to help the team and HRC, let's see what this weekend brings. We have been working well with Honda and I am grateful to them for this opportunity.” 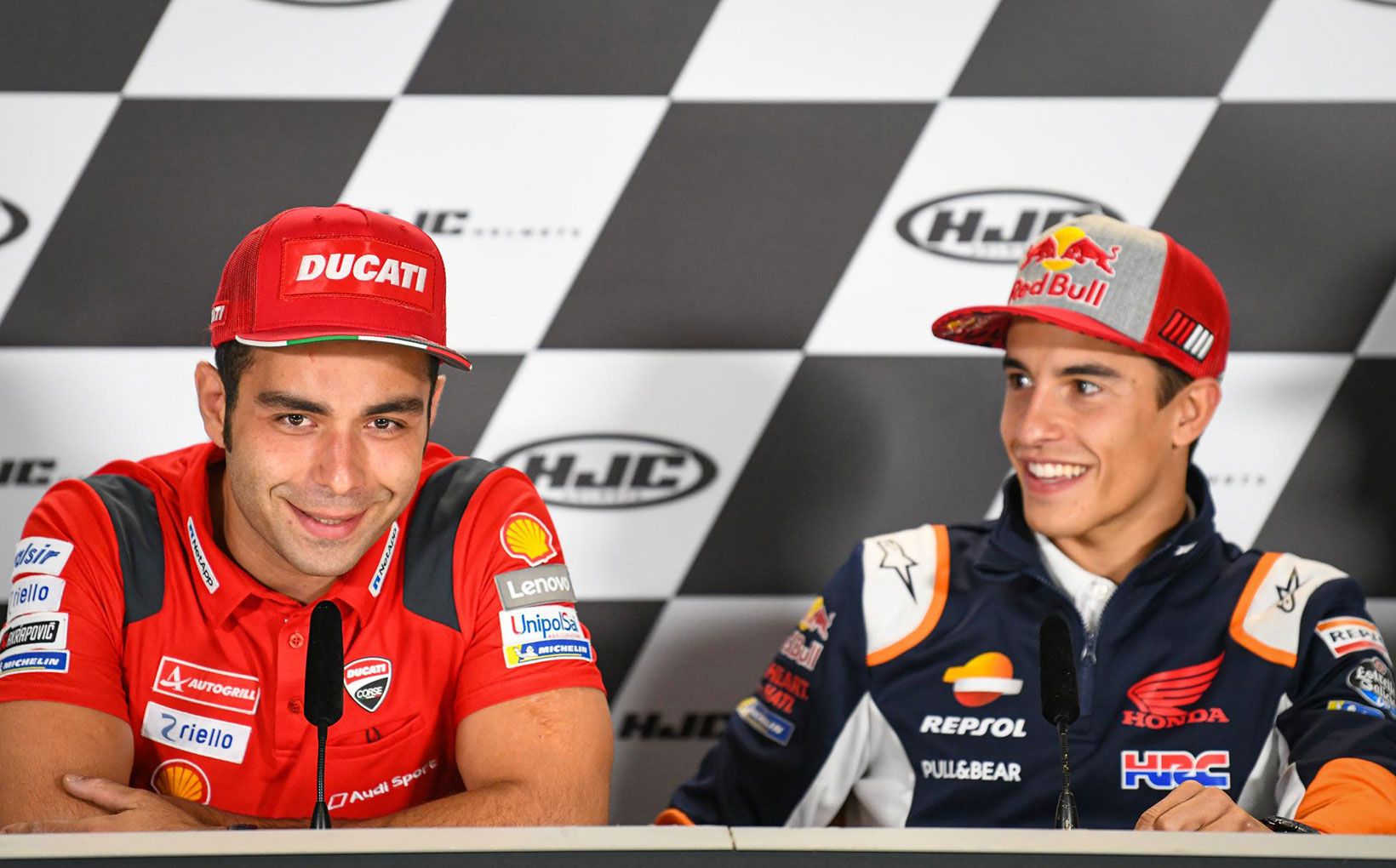 It was wonderful news for Danilo Petrucci fans with the Italian rider signing on again for 2020. The Mission Winnow Ducati rider is really excited about carrying forward his momentum and progress for the remainder of 2019 and starting even stronger in 2020 with the red beast beneath him. DP09: “I'm very happy to continue with Ducati for another year – said Petrucci – It was my goal ever since the beginning of this new chapter, because we immediately found great chemistry with the team. In this first half of the season we were able to progressively increase our competitiveness, taking two podiums and an unforgettable win. To renew our collaboration before the summer break makes me even more serene and confident about the future. Now I simply want to stay focused and continue to improve as a rider to achieve even better results on track. We're third in the Championship, and we want to finish the season within the top three.” Petrucci is such a nice guy and his hard work is paying off. We know Petrucci will be sleeping just fine whereas Valentino Rossi not so much with such a disastrous season.

If you were to ask Rossi how it feels to lack in competitiveness and ride a bike that is not reflective of his talent, he would probably look completely shattered. The Italian maestro is a genius on two wheels and at the moment, the results are not ideal. VR46: "This is not a positive time for us. The end to the race in Assen was a real shame because I felt good after the warm-up, I was fast but instead ended up with another zero. The good thing is that now we go straight to the Sachsenring and we can immediately work on another GP weekend. It will be important to understand if the changes made for last Sunday's race will also be positive at the Sachsenring this weekend. We will try to be competitive right from the start on Friday." Rossi has to find something quick smart in order to improve because the rookies and other manufacturers are hunting! We will have to wait and see if the Sachsenring circuit can work in with the Yamaha and Rossi. Fingers crossed we see the Doctor at the top once again with a smile. 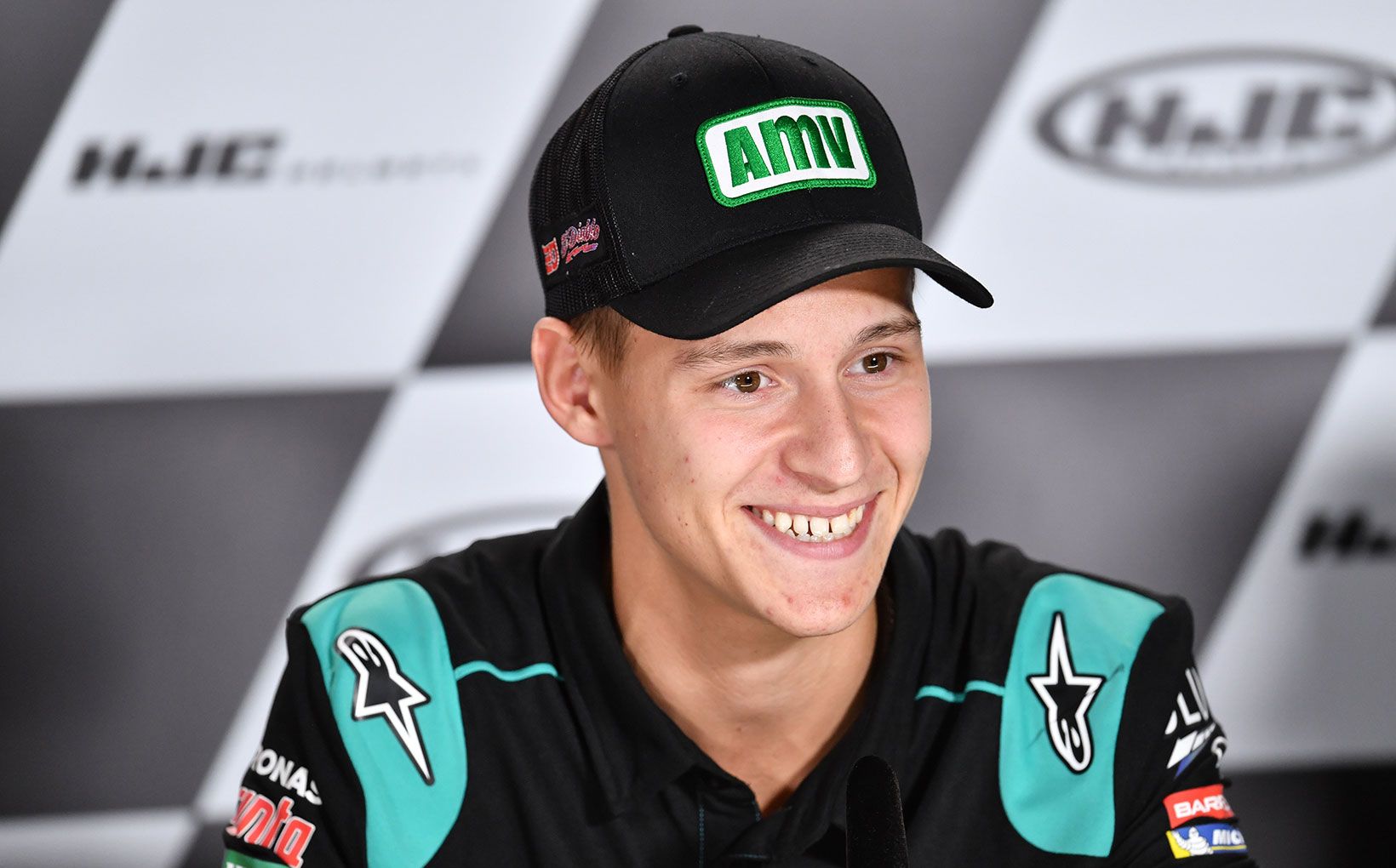 In terms of records, Fabio Quartararo is continuing to break them and is having an absolute ball in the process. He will be pushing to the maximum even after the arm pump symptoms that were experienced last week at the Dutch TT. The French rider is having the time of his life and it has been a long time since a rookie was so fast, consistent and pushing other riders to be the best versions of themselves. FQ20: “Sachsenring is a circuit that can be really good for us. It’ll be positive to arrive there because in Assen I was able to rest my arm injury in the left corners and Sachsenring has a lot of left corners! I can’t wait for a few days of rest before starting the weekend strongly. It isn’t my favourite circuit, but with the physical condition that I’m in it can be a good track for us – and it’s also been a good circuit for the Yamaha YZR-M1 too.” 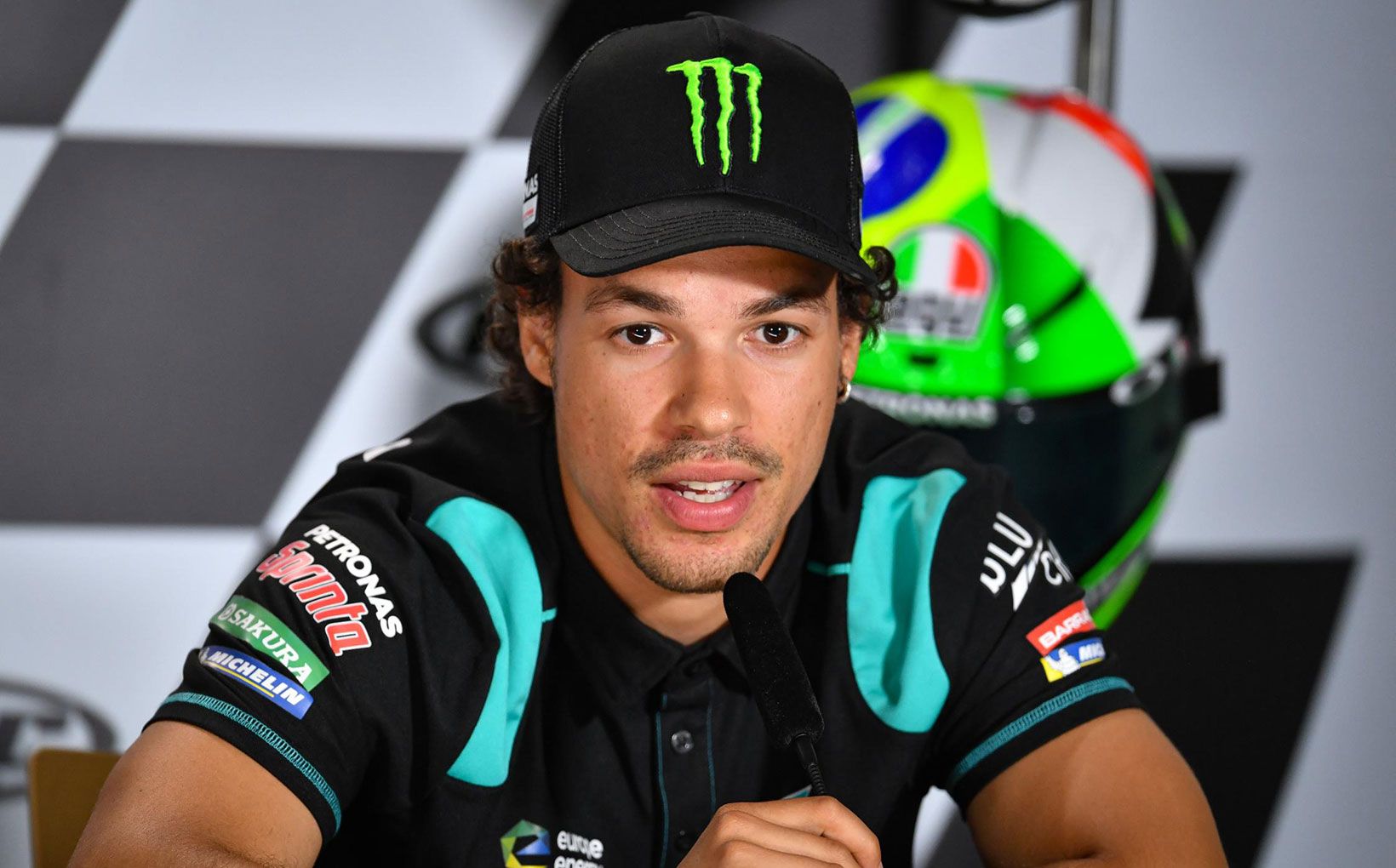 His teammate Franco Morbidelli is not as excited for the German Grand Prix as he is finding the bike challenging at times and has not been on track here enough on a MotoGP bike to know what is positive and negative in terms of race set up, feel and tyre management. FM21: “I’m not sure what to expect at Sachsenring, but it’s a circuit that I really like. I’ve always been fast there on a Moto2 bike, but I didn’t ride last year on the MotoGP bike because I was injured. Let’s see what happens, but we’re going in with a clean sheet of paper and with a really good feeling in the last ten laps of the race at Assen that we can build on. The team and I have a really great working method now, it’s a narrow track with flowing corners that will suit the bike, and I feel confident going there on a Yamaha.” Again, Morbidelli has to pick up his performance because his career is relying on top results especially when Quartararo is a stand out!

The work will be tough for Andrea Dovizioso and also Jack Miller as the Sachsenring circuit is not a favourite for the Ducati set up. The anti-clockwise direction means tight corners and strong rivals. We are really excited to see if Jack Miller can improve and fight for top points even when the odds are stacked against him.

On the other hand, Cal Crutchlow will be feeling angry, upset and tired after injuring himself on his road bicycle. It has been very bad luck for Lorenzo and Crutchlow of late. CC35: “I’m heading into the weekend with a bit of an injury to my right leg as yesterday, when I was out training on my bicycle, I slipped whilst I was off the bike checking something and hit my knee. There’s a small damage to one of the ligaments, which we think is the ACL, and we’ve had to have some fluid removed as it was swollen. We’ll have to see how I feel tomorrow on the bike, but hopefully I can bend the knee enough to be able to be competitive this weekend.” As the curtains lift, we are ready for track action and what comes next!