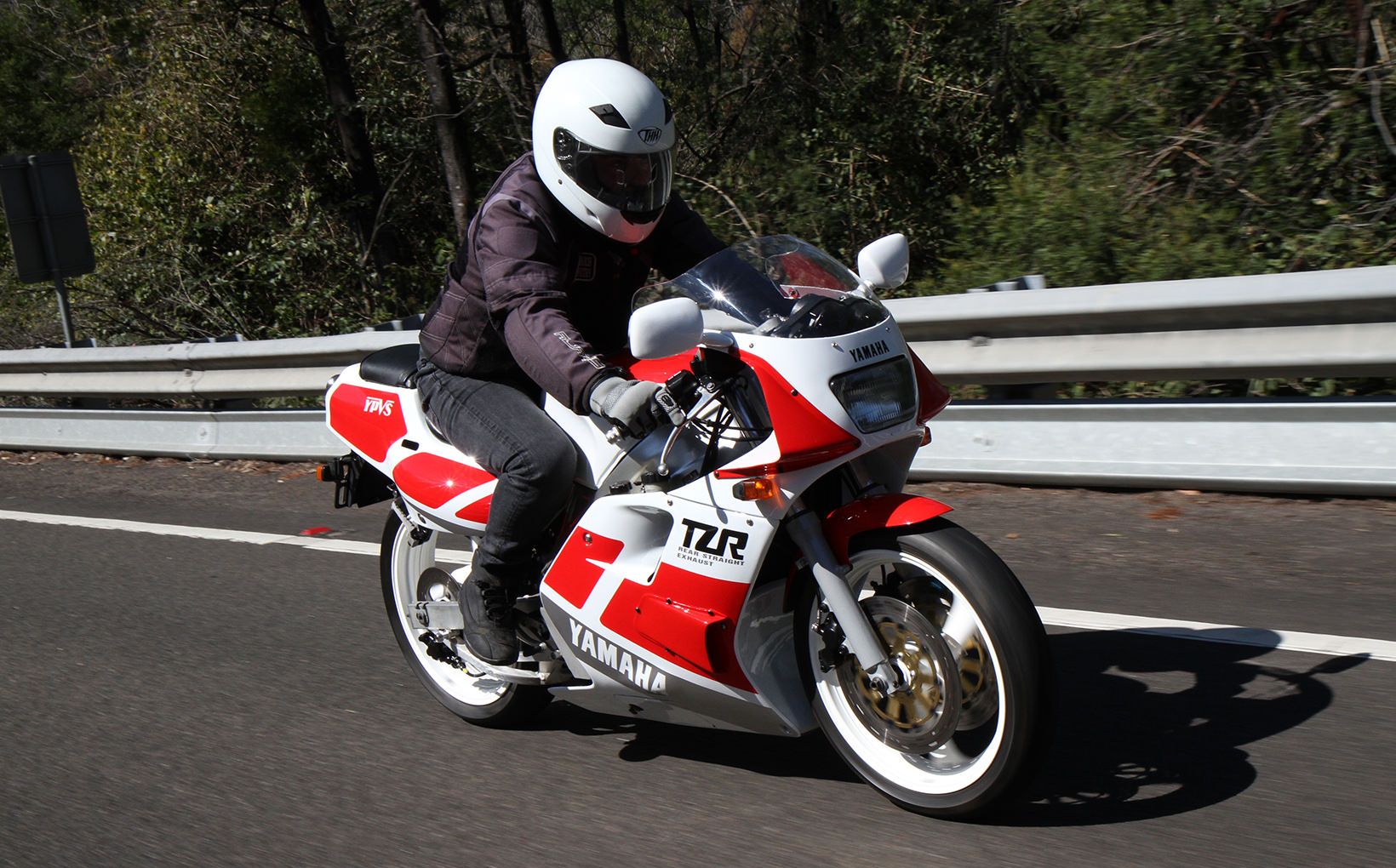 In May I showed you the RZV500R and my RG500 resto jobs. Well, I recently had the pleasure of doing up (again, for beer not money) a mate’s TZR250. Now, this was no ordinary TZR, it was a 3MA – reverse cylinder and a bike I dreamed about when I was a young P plater with my own 1987 TZR250. Our Aussie model was the parallel twin 2MA, while in Japan they got this amazing 3MA. I’d seen images and had the poster but I never thought in a million years that I’d be working on one in my 40s! 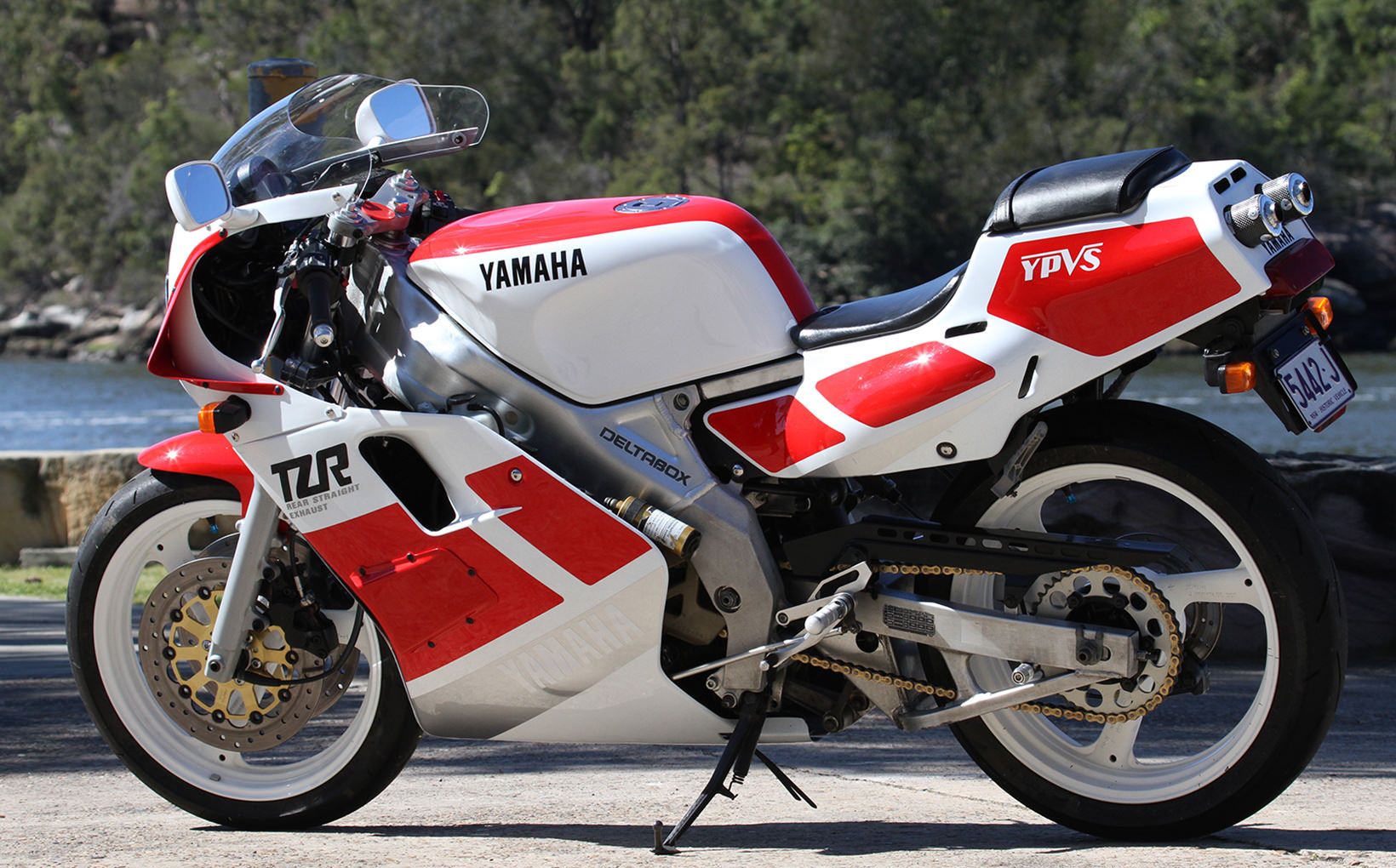 It has been one hell of a ride but the journey from wreck to weapon was well worth it. Darren’s TZR250 3MA is better than new and I mean that. Tim, Darren and I did not leave one nut, bolt or washer alone – every single component was cleaned, wire wheeled or refreshed in some way and the bike was stripped in its entirety then carefully reassembled. It’s basically a blueprinted bike.

Before I handed the bike back to Darren, I wanted to make sure it was safe and going to be reliable. After through three or four heat cycles over a few days on the bench, then double-checking for leaks and so forth, it was finally time to ride the bike. I have to admit it, I was nervous… 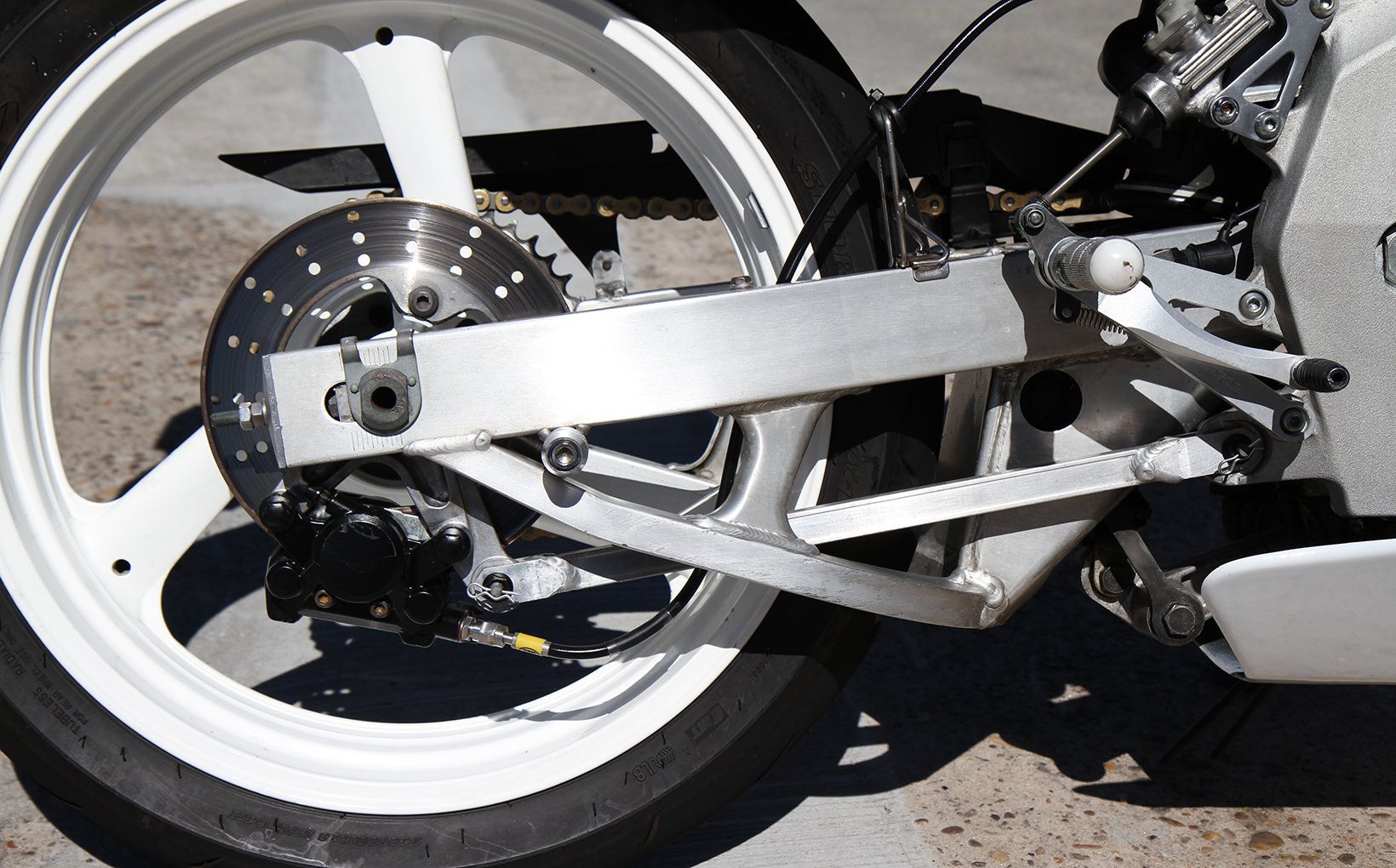 The braced race swingarm was fully re-polished and greased by Tim, along with all linkages and bearings. Rear caliper was rebuilt. 18in rear wheel, typical 1989. 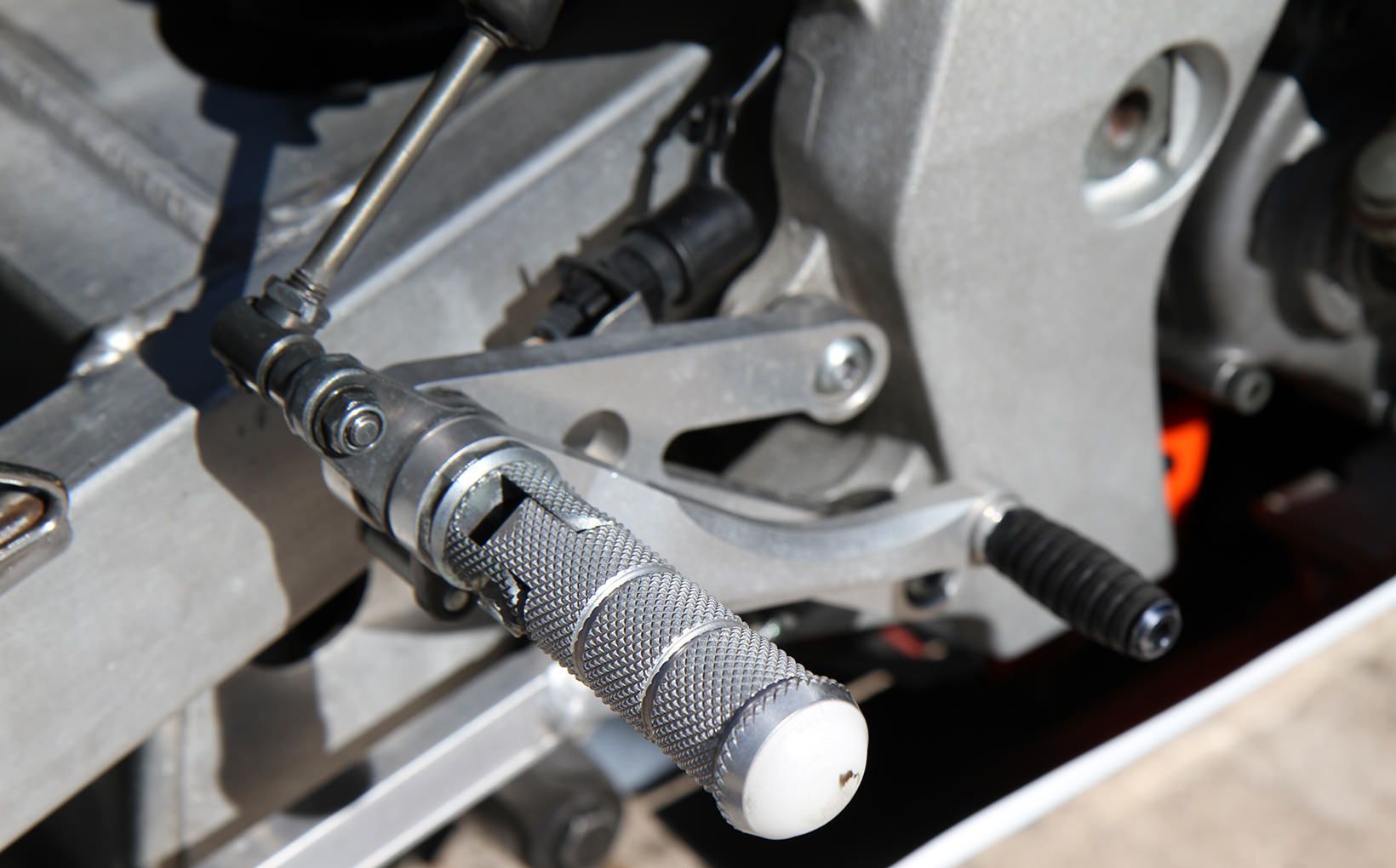 The rearsets are billet alloy race items from Japan. The rear master-cylinder was rebuilt.

The nerves went away quickly as the reverse-cylinder twin came into the powerband and the Jackal pipes started to howl as the YPVS opened up the exhaust ports and those trick flatslides came onto the mains. I’d been waiting to have a decent ride on a 3MA since the early 1990s when I first discovered they existed. I had that 2MA but I used to see these 3MA masterpieces in the overseas magazines and also a Japanese mate would send me Japanese bike magazines (that I could not read), such as Cycle Sounds and Riding Sport. 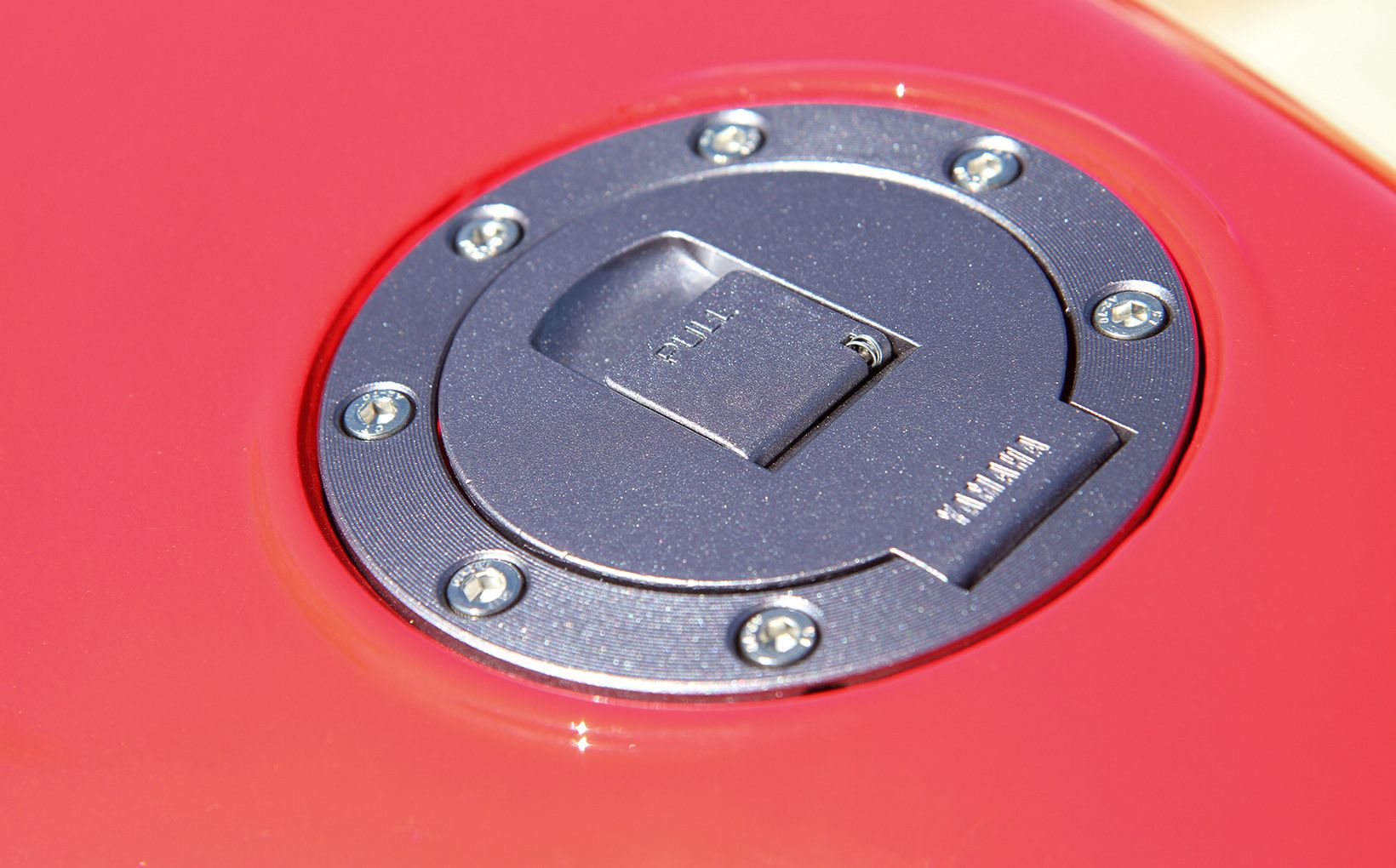 Aircraft styled alloy filler cap, most Yamaha’s had these back in that era. Darren resprayed it silver. 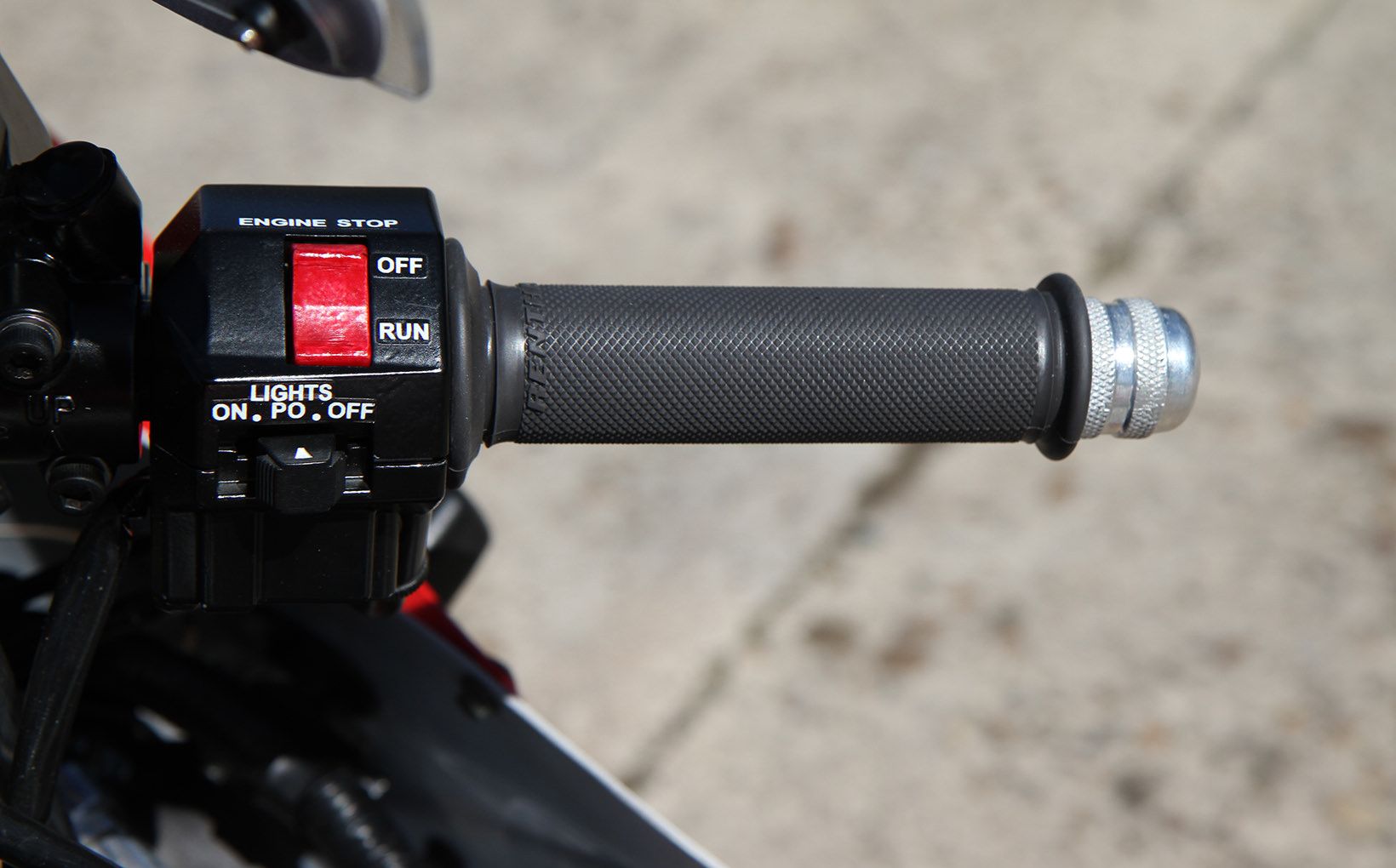 Of course, I’ve since ridden everything from factory 250cc GP bikes to 500cc GP bikes, World Superbikes and all sorts of cool stuff, so I wasn’t expecting the craziness I’d fantasised about as a teenager wanting a 3MA, but that doesn’t take away from the experience at all… 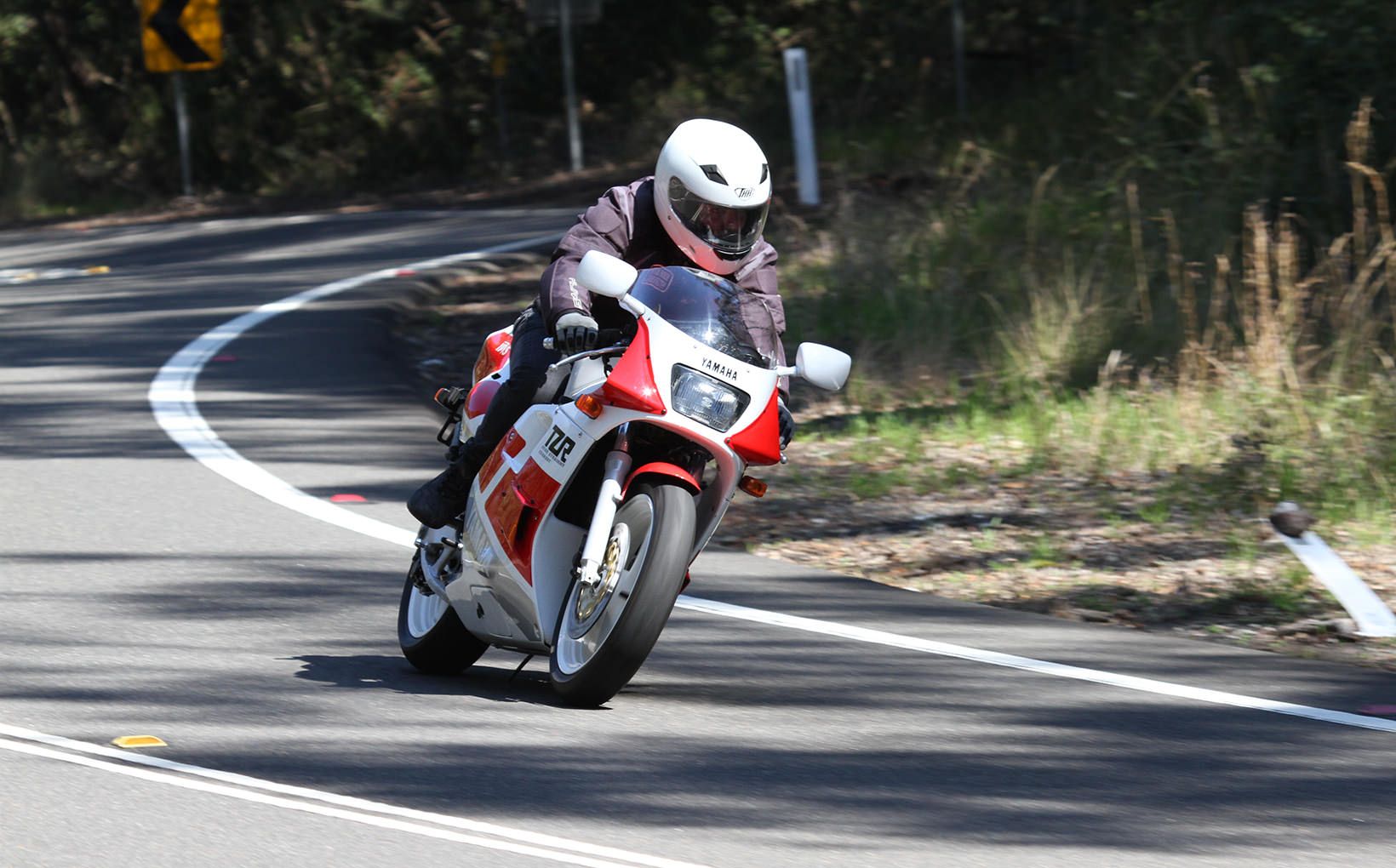 Darren is a regular now on the Old Road on his TZR. If you see him up there, say G’day and check out his bike.

First stop was the main street of my hometown where I just had to ride past the shopfronts and check myself out in the reflection. I know, I know. But I used to do it on the same strip when I was 16 on my RZ250FN then TZR, thinking I looked like Max Biaggi or the next 250cc World Champion… 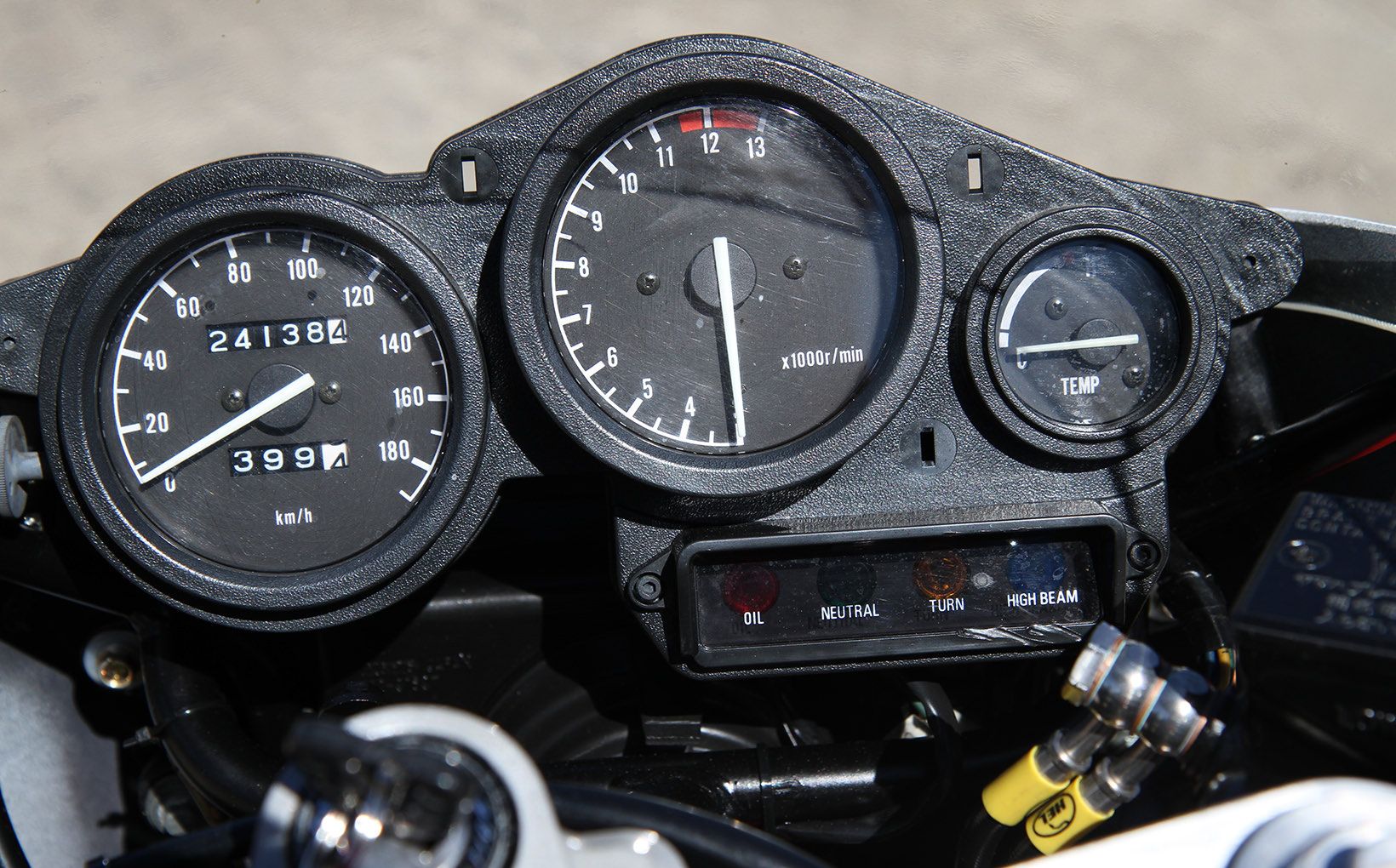 24K genuine kilometres, amazing little bikes get used in Japan. It has barely made second service in 32-years!

Next stop was the service station, where I pumped up the tyres and filled the tank with premium unleaded. I had a quick can of Red Bull and perved on the bike. Our local Shell Servo used to be 24/7 and was the only place open in the entire area of a night. As a result, it was the place to be, particularly with your new bike or car, as a teenager. So, standing around there drinking Red Bull was a typical Friday night. I’d have loved to have a 3MA there back then in 1991/1992… So, I relived that moment then headed east. 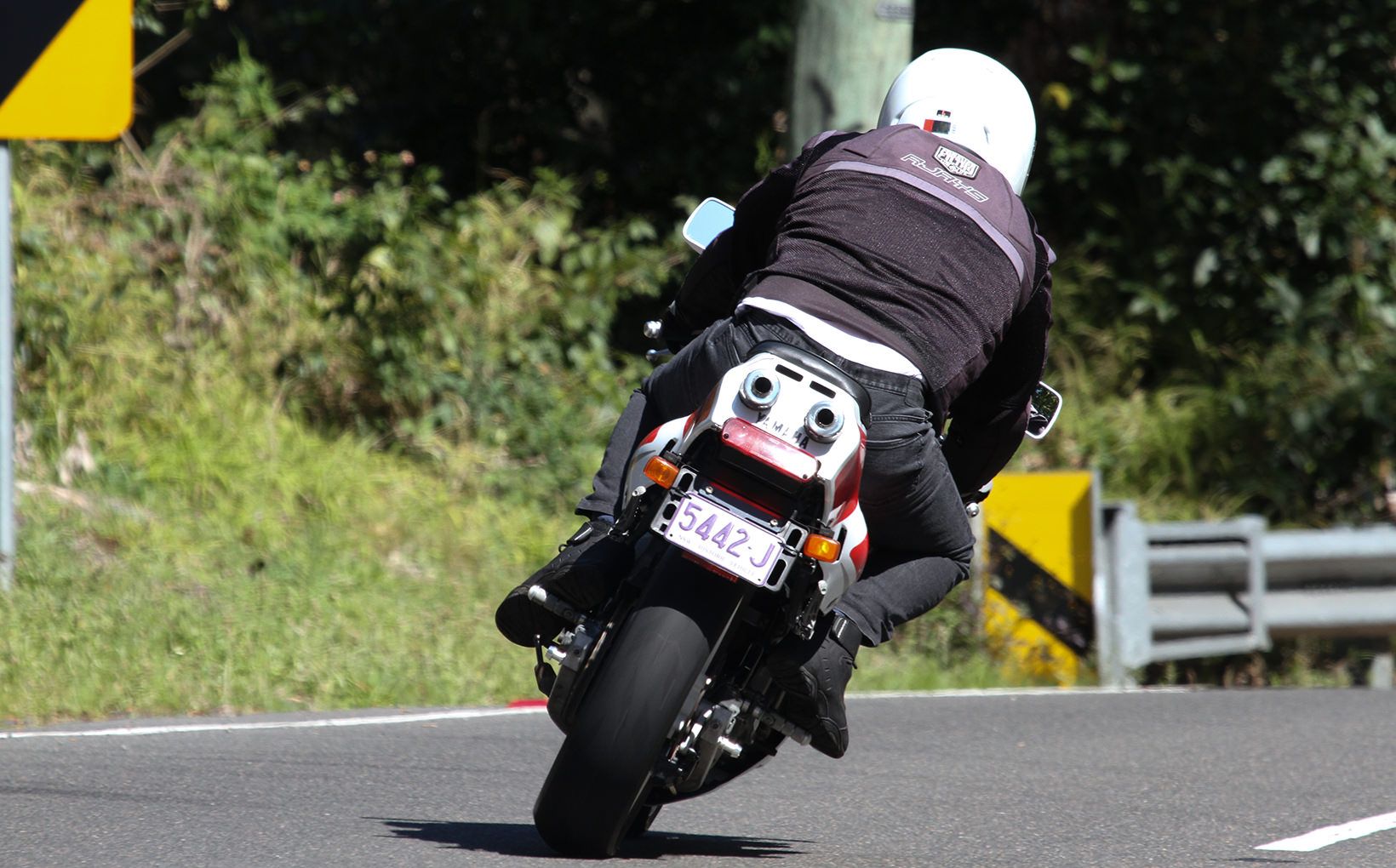 Believe it or not, Darren only bought the TZR 3MA for that rear end. He loves the two pipes exiting out the back just like a real 1989 Yamaha YZR250 GP racer!

East to the beach and the esplanade, where I literally ripped the TZR up through the first four gears about a dozen times up and down the main strip as annoyed middle-aged locals in active wear waved their fists at me and shook their heads. I smoked them all out, just like when I was 17, then once I felt I had disturbed their power walks and ruined their view of the beach I gave them all the finger and took off in a cloud of Castrol synthetic smoke… It felt good to be 17 again! 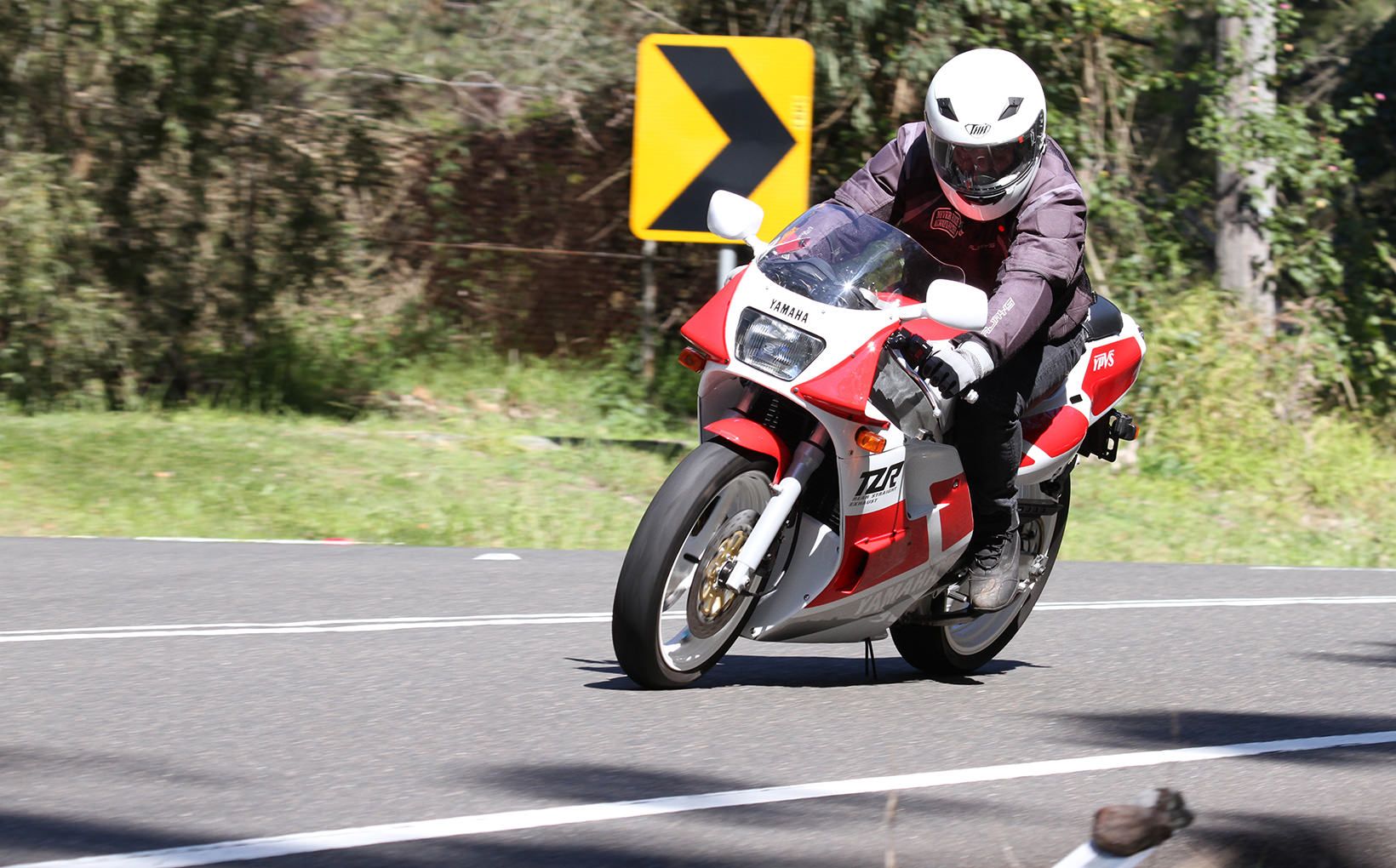 Handling is pin sharp and as good as anything on the market today, in fact, better than any small capacity bike I can think of.

Time for a blast up into the hills and through the local National Park. A short 10-mile strip of traffic free undulation twists and turns perfect for a 250 race rep.

Climbing up the hills at the start of the run, engine on the pipe, the sound bouncing off the giant sandstone rock face, is pure magic. It’s like the sound of 35 250s leaving the line in a hectic 250 proddie race back in the day…

Third gear and full noise, tacho rapidly climbing towards 10,0000rpm, I snick back three gears in rapid succession for a super tight first gear hairpin. Hard on the brakes, the TZR remains stable and the brakes are proper powerful, with only two fingers needed thanks to the Hel lines, and I run it into the turn. A load of clutch slip and 8000rpm sees me and the Yamaha firing off and up the hill with the ageing rear 18in Dunlop squirming for mercy… 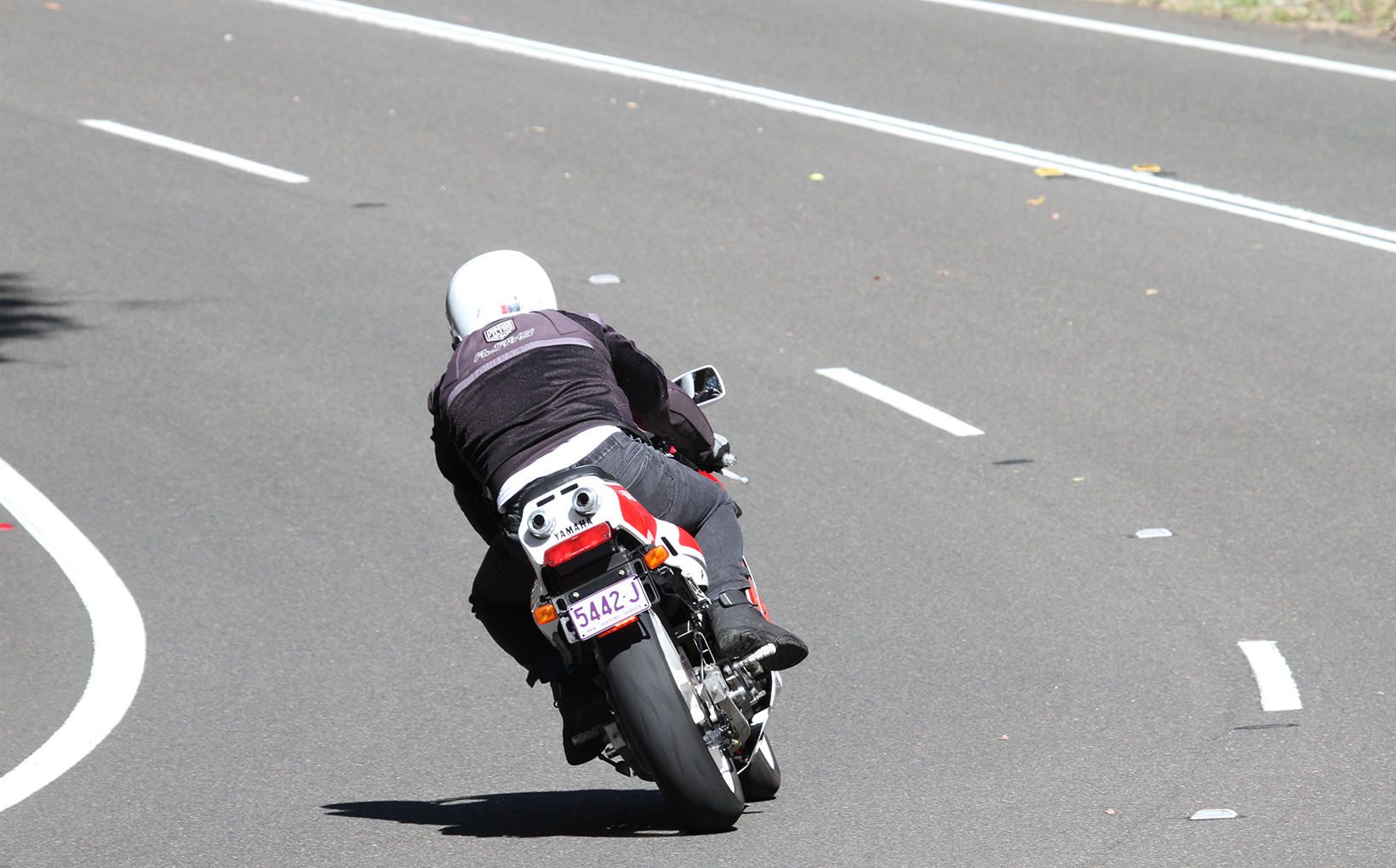 The howl from those two Jackal pipes is something else! It bounces off the rock walls. Bliss!

Head on the tank (I can still manage that if I loosen my belt a few notches), first, second, third, fourth gears changing up at 9,5000rpm each time, I weave the TZR through the flowing esses, cliff on one side and rock wall the other, as I head up the mountain like I’m in the TT. These are the feelings only a 250 two-stroke can give you. Only a bike like this can take you back to your boy racer days and make you feel so alive… 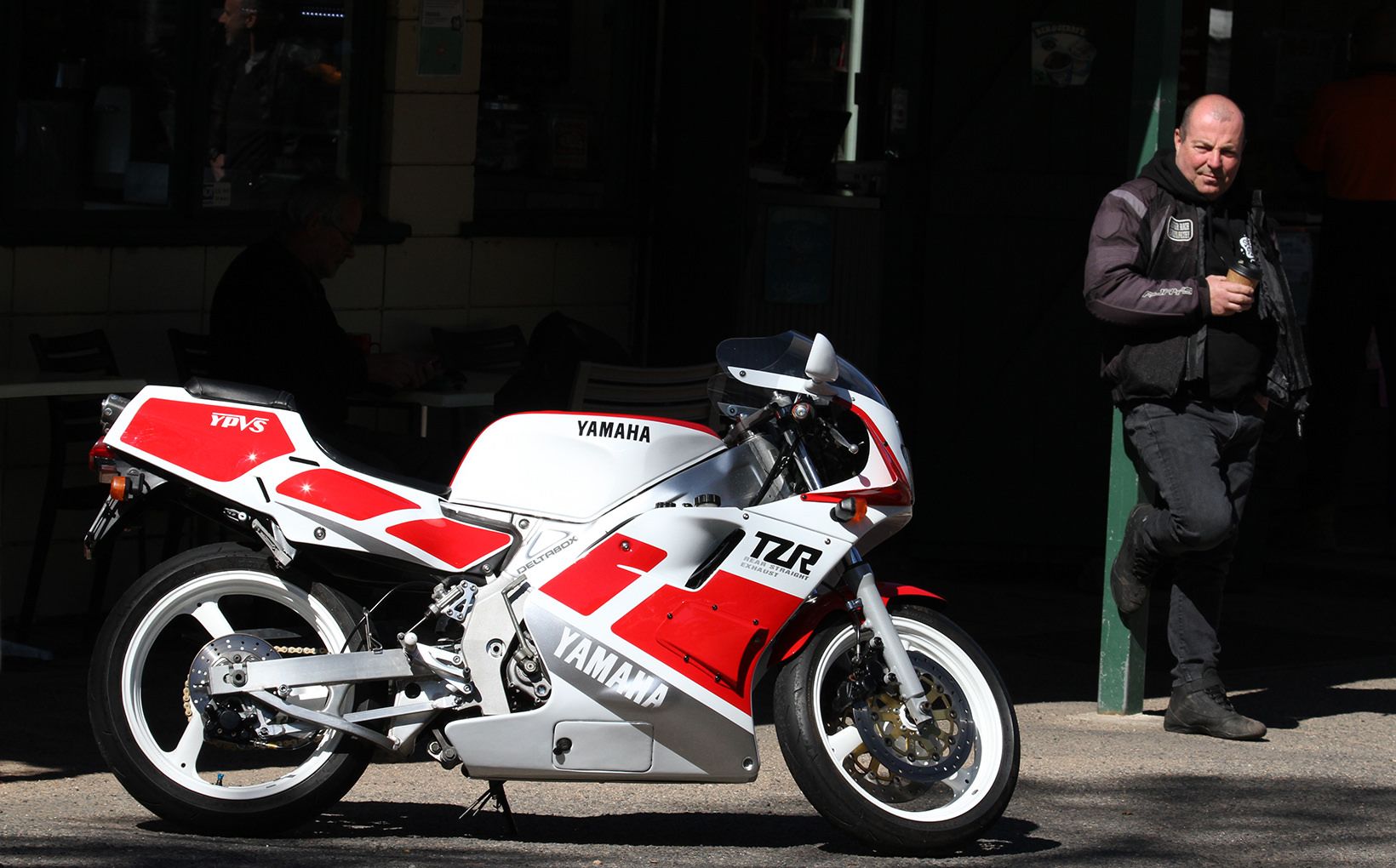 I think you have to agree, it came up looking new!

I slowly head home at the legal limit before any cops arrive. I’m sure the locals heard the bike screaming through the hills…

After safely arriving home I let the 3MA cool, wipe it over, check the fluid levels, check the spark plug(s) colour and give Darren a call to tell him the good news. I rode his bike. It didn’t blow up. I wasn’t arrested, and I have cold beer in the fridge…