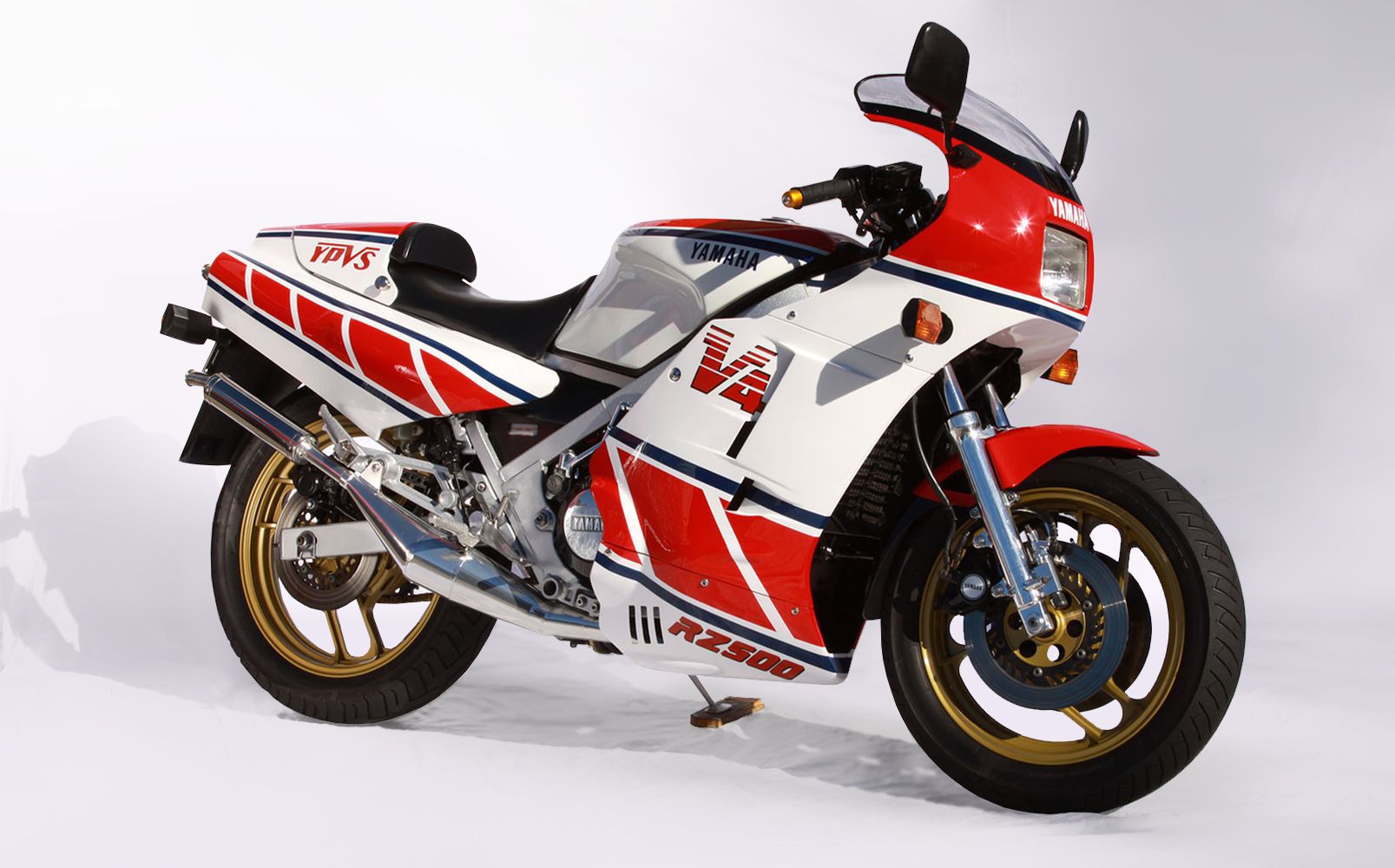 With RZ500s becoming somewhat of a rarity, the Japanese import RZV500R makes an ideal alternative boasting a number of upgrades, and easily fixable restricted power...

I have to admit that I am a certified RZ nutter. I’ve just spent 12-months fully restoring an RZV500R for a mate as a favour and that included the engine. I think I want one for myself now! 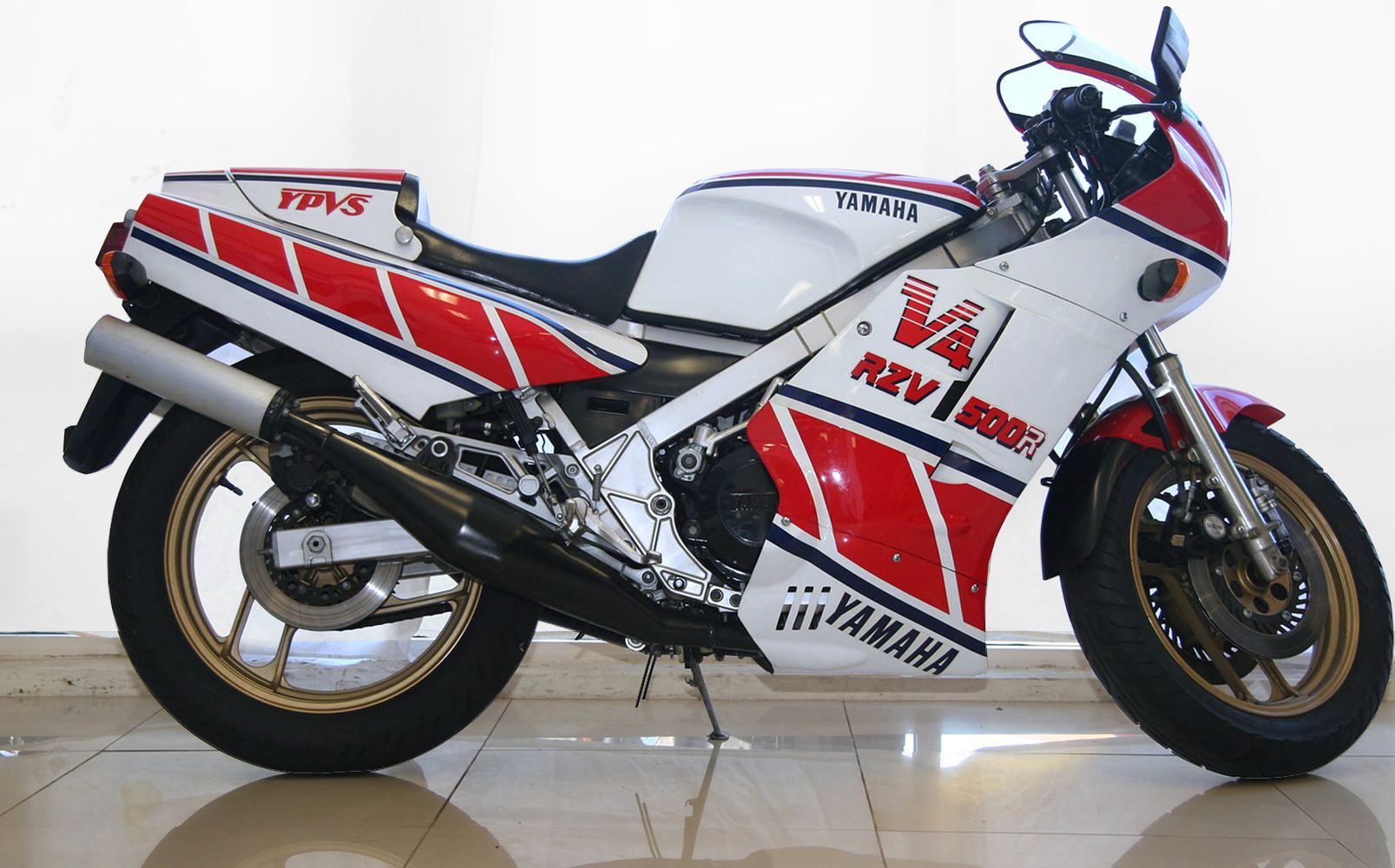 My first road bike was an RZ250FN and I’ve had a few RZs over the years as well as RDs. I even had an RZ125. Rare little beast here. But one bike I’ve never owned that I have lusted after since I was 16-years-old is the mighty RZ500.

RZ500s are getting harder to come by these days but a good alternative is a Jap import RZV500R, the alloy framed Japanese domestic mode – which is more readily available with low kilometres and will set you back around $20,000 AUD. 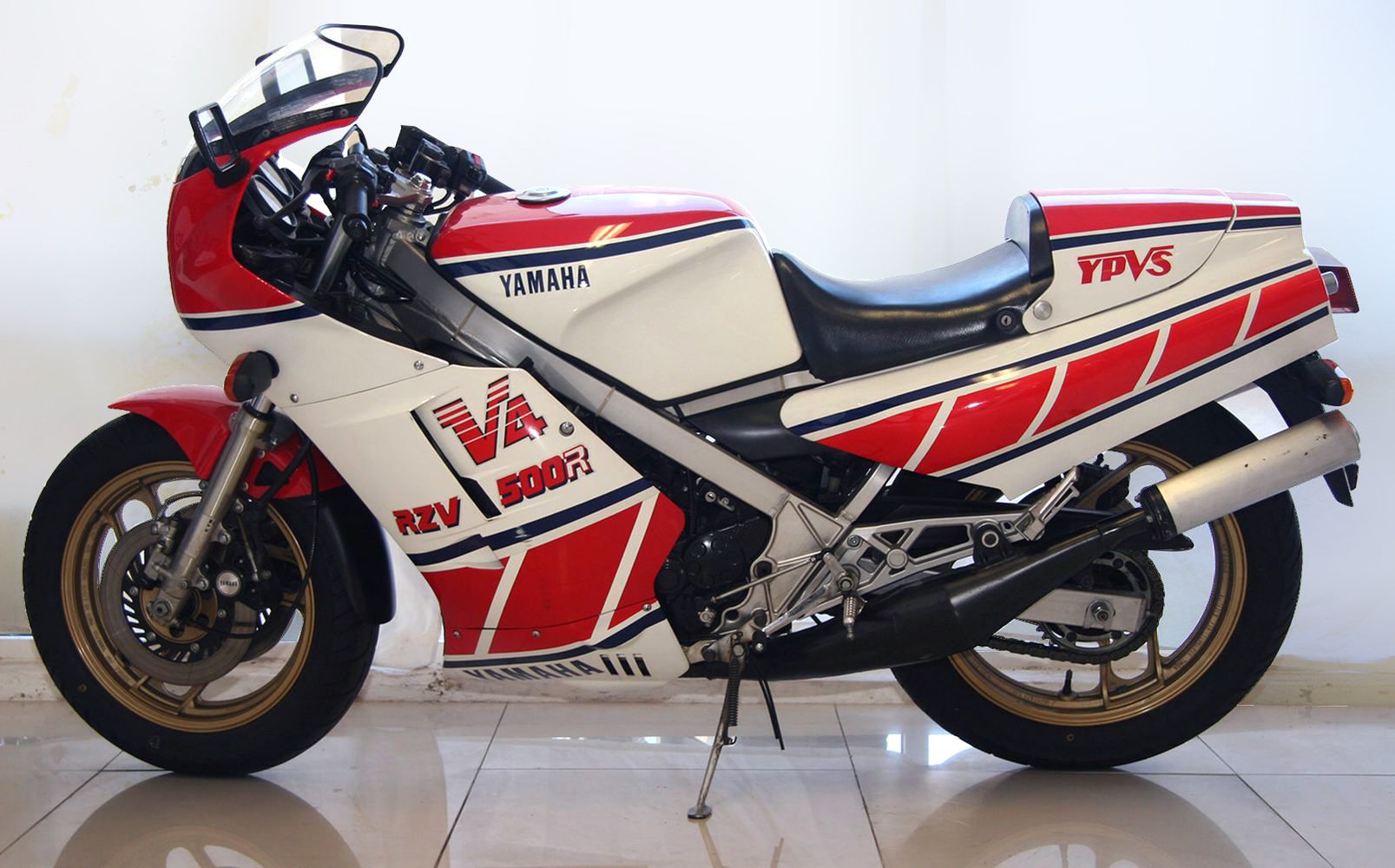 The RZV had alloy gear and brake levers as well.

A hand-welded alloy frame weighing just 9.1kg was featured on the RZV500. The entire package weighed in at 9.1kg less the steel framed model. But, sadly for the Japanese, the RZV was restricted to an underwhelming 64hp thanks to restrictions in the internal diameter of the exhaust pipes and with jetting. This is an easy fix… 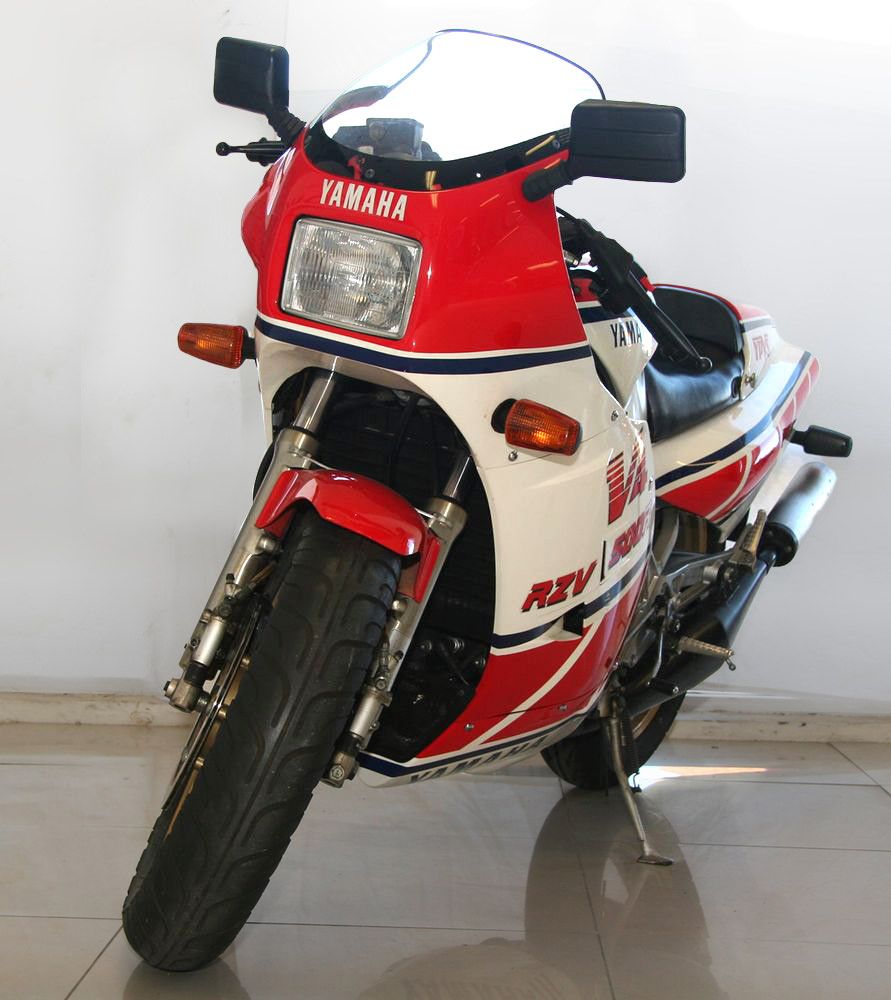 A 16in front wheel. These bikes are prone to tank slappers. 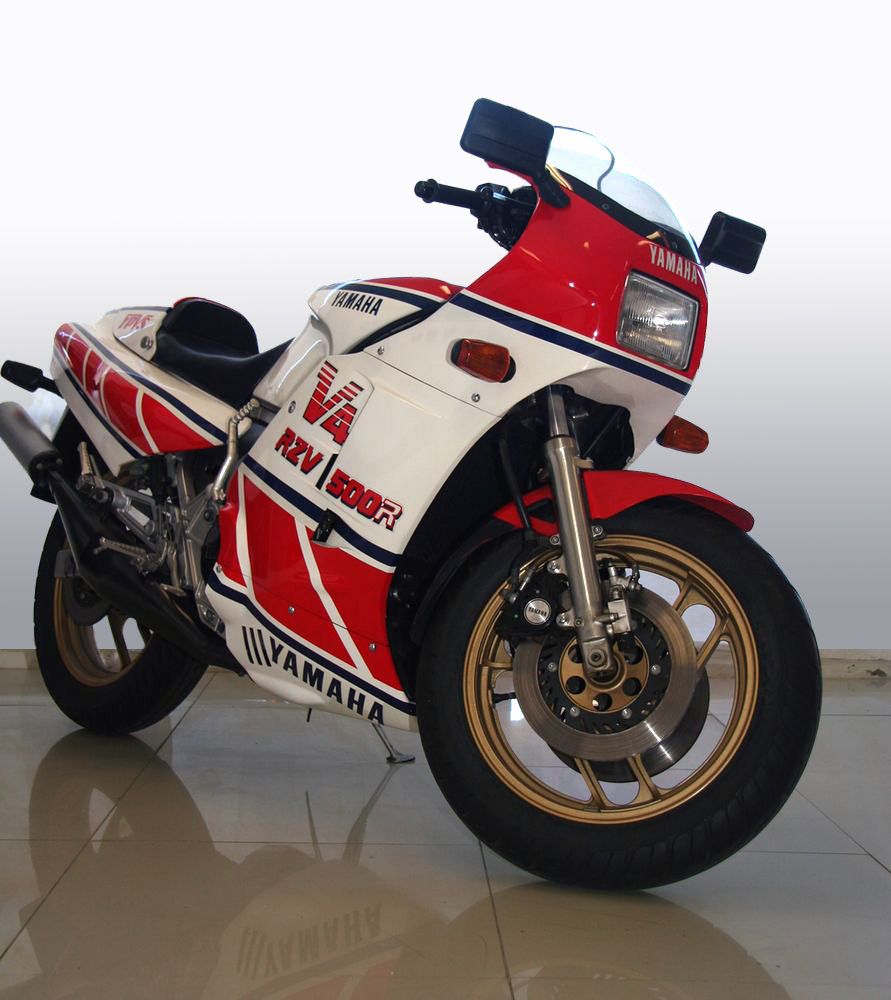 Aside from the above changes the RZV500R is mechanically the same as the RZ500N we received here and the RD500N in the UK and Europe. The 50-degree V4 twin crankshaft two-stroke engine was seriously trick in its day but also overly complicated.

The GP YZR500 featured rotary disc induction like the successful RG500 Suzuki but Yamaha chose to go with reed valve induction and a YPVS power-valve system to broaden the powerband of the RZ500. The lower pair are fed through crankcase reed and the upper pair via the cylinders. 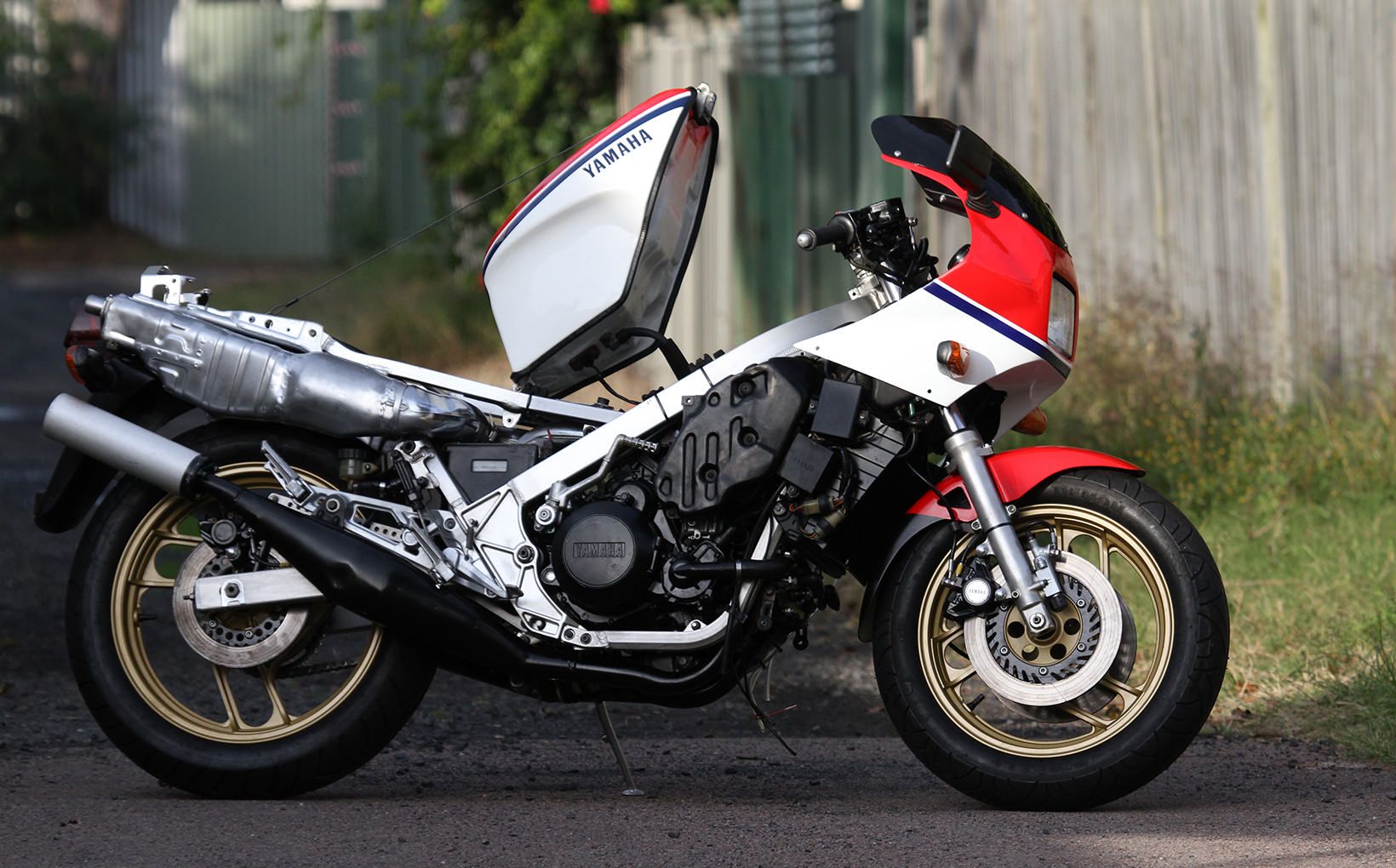 The RZV500R undressed in all of its complex glory.

The Mikuni round slide carburettors are mounted on 90º manifolds on the sides of the engine behind the fairings and have complex cabling and airbox shape. The front carb’s feed the rear cylinders and the rear carb’s feed the front! 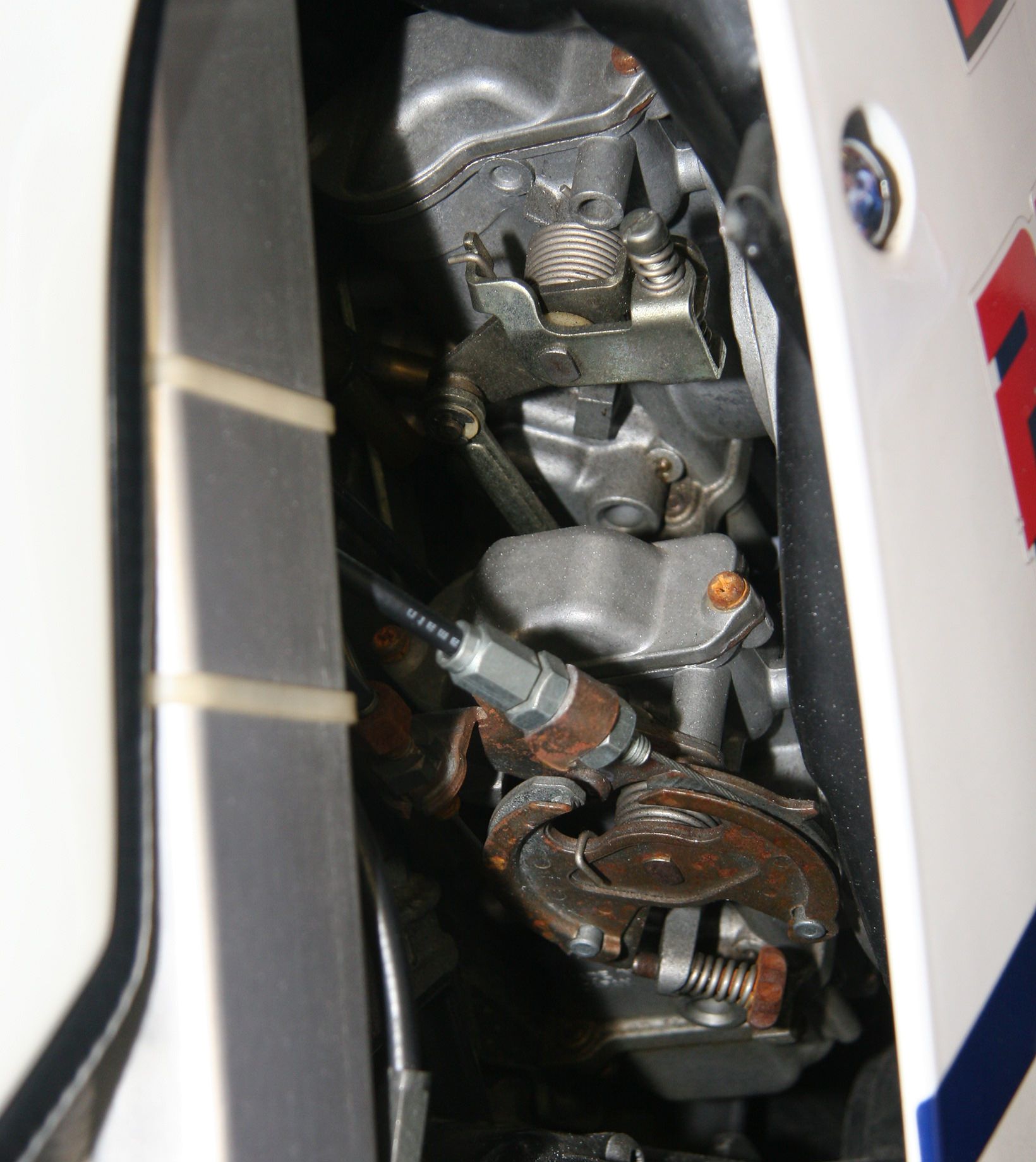 The carburettors are side mounted. The rear feed the front cylinders and the front feed the rear! 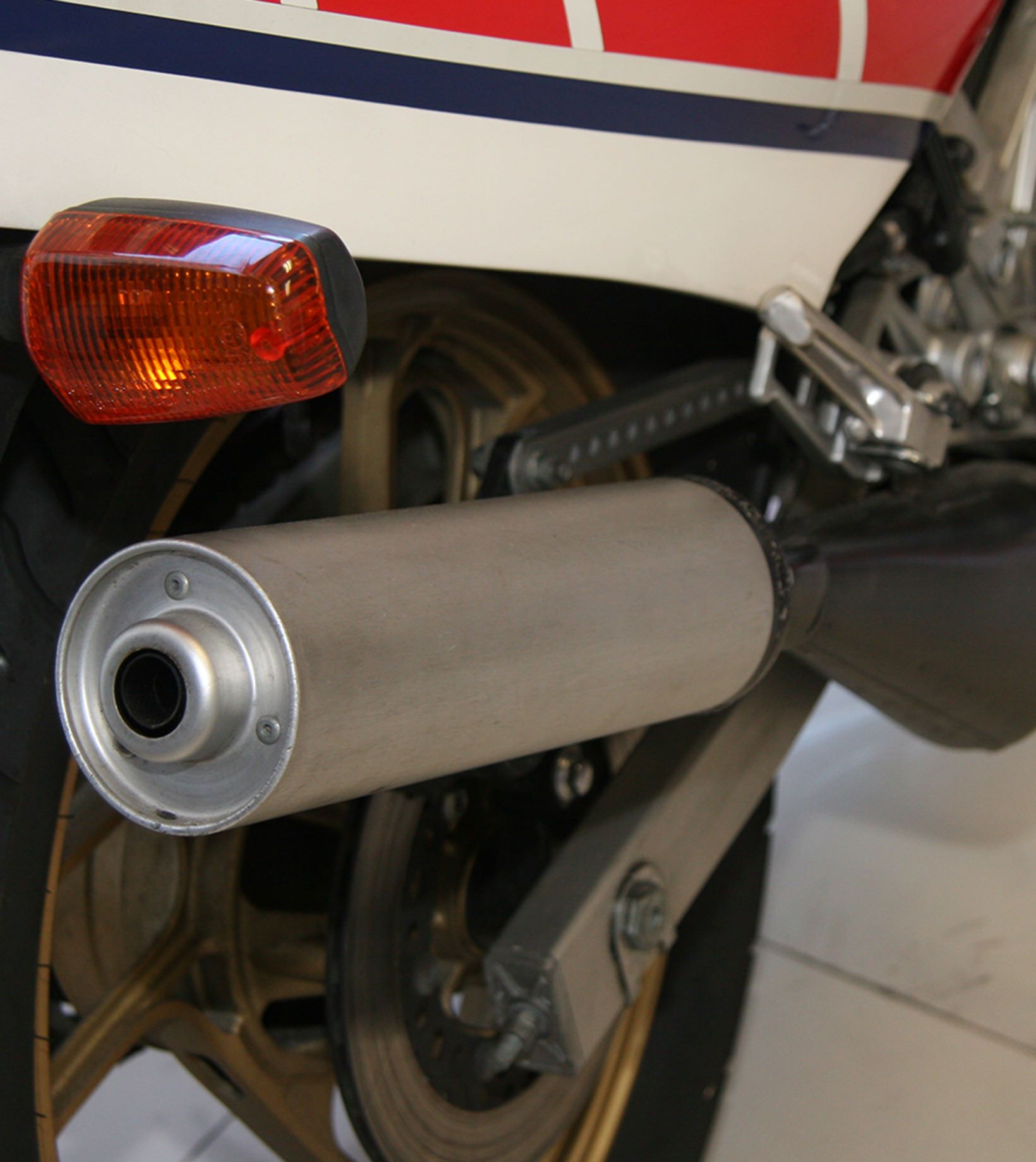 Restrictions were in the exhaust system and with jetting…

The lower expansion chambers exit normally, under the engine, but the rear cylinder pipes are complex and cross over each other to achieve tuned length then exit under the tail unit.

The dual crankshafts are geared directly to the clutch and there is a counter-balancer driven off the front crank on early models, later off the rear crank. The gearbox in the RZ500 is a six-speed close-ratio unit with cassette-style removable gearbox and unusually the outer main bearings and a separate trochoid oil pump lubricates the gearbox. Two-stroke oil is injected via Yamaha’s Autolube system. 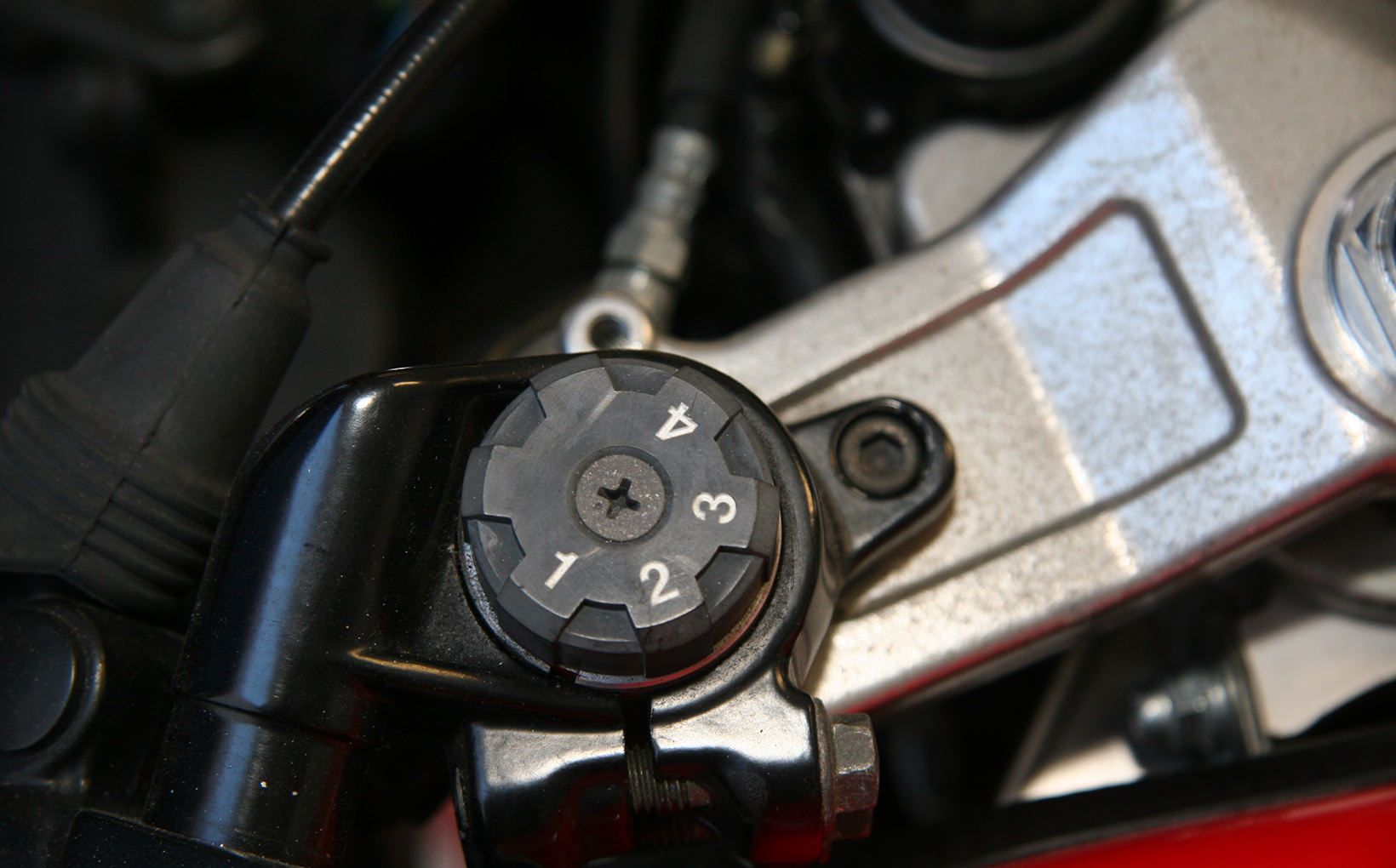 Air fork preload and rebound adjustment as well as compression adjustment was very rare in 1985. 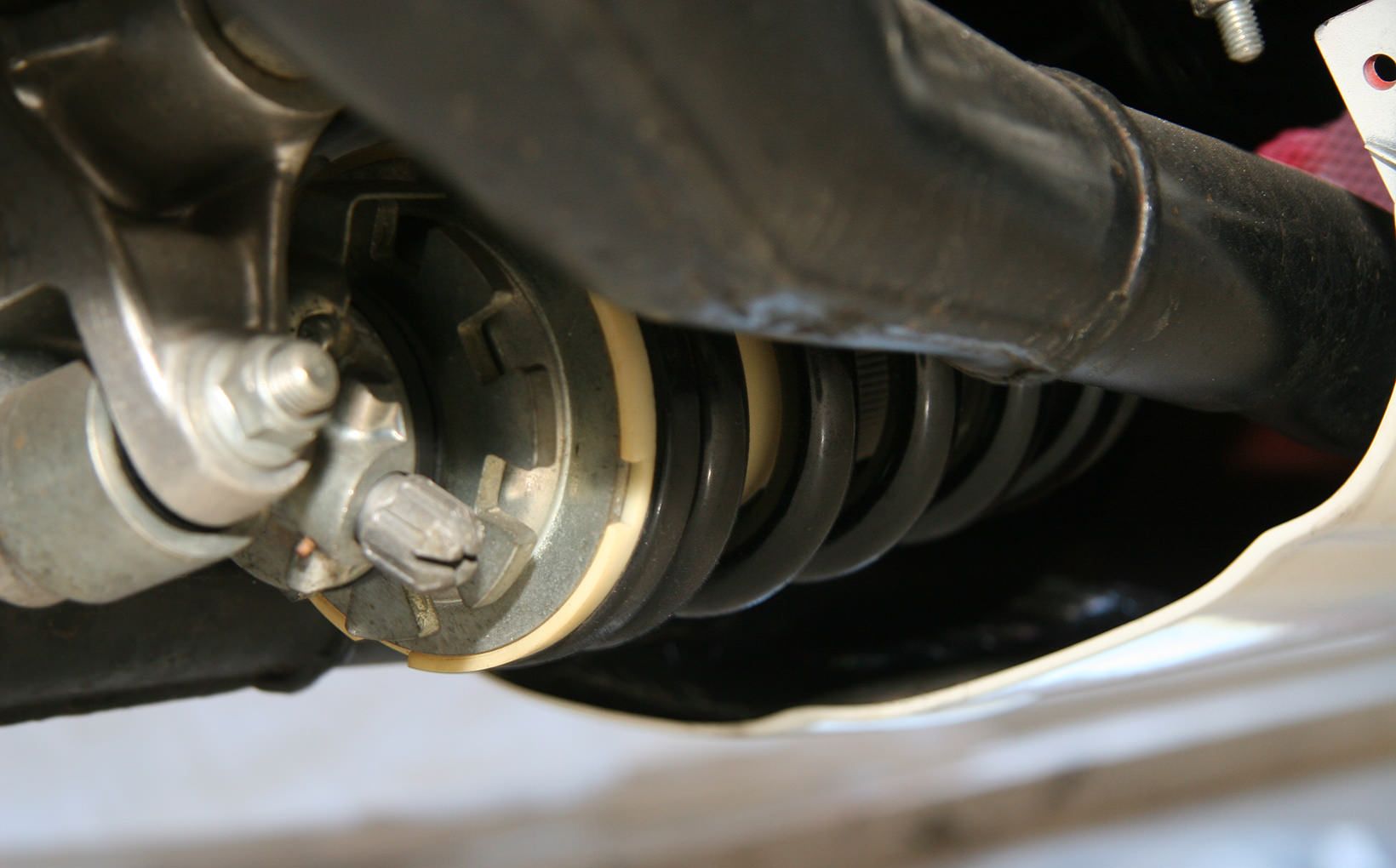 The shock is underslung and cops all of the road grime.

The RZV500 was also originally fitted with 16in front and 18in rear wheel. Chassis-wise the RZ500 is also complex. The forks on the RZV are air assisted with hydraulic anti-dive and prone to fork seal leaks. The rear shock is horizontally placed under the engine and uses the lower crankcases as a mounting point. This is because the under-seat area is occupied by the YPVS servomotor, battery and rear exhausts. 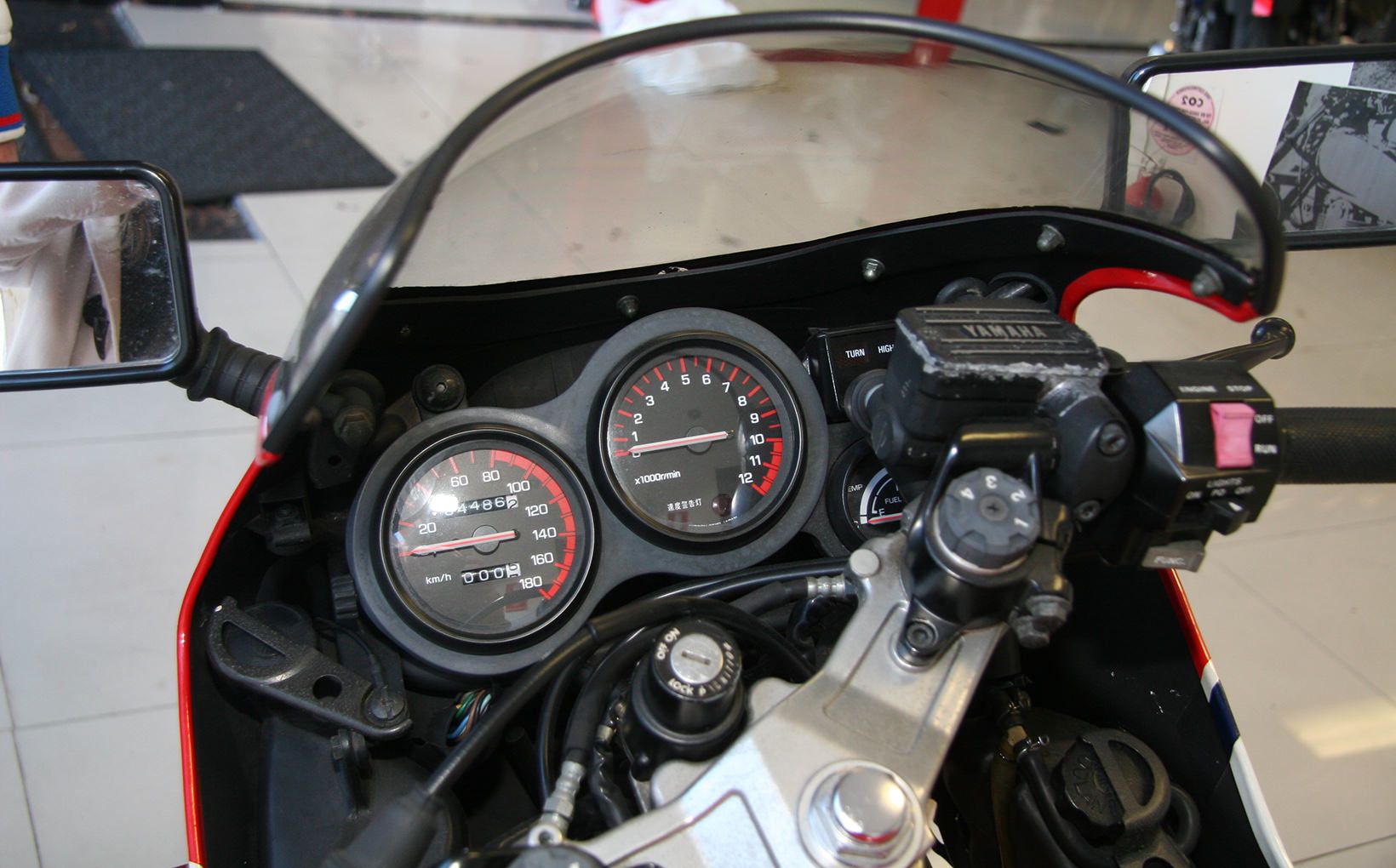 The RZ500 Australian delivered bikes have not fared so well in general and compared to the RG500, there are fewer mint examples around. This is most likely due to them being more road friendly than the RG500 and therefore racking up more kilometres and general use over the years. They were also expensive to maintain so probably suffered there from any pennywise owners.

Fairings crack and most have been repaired. 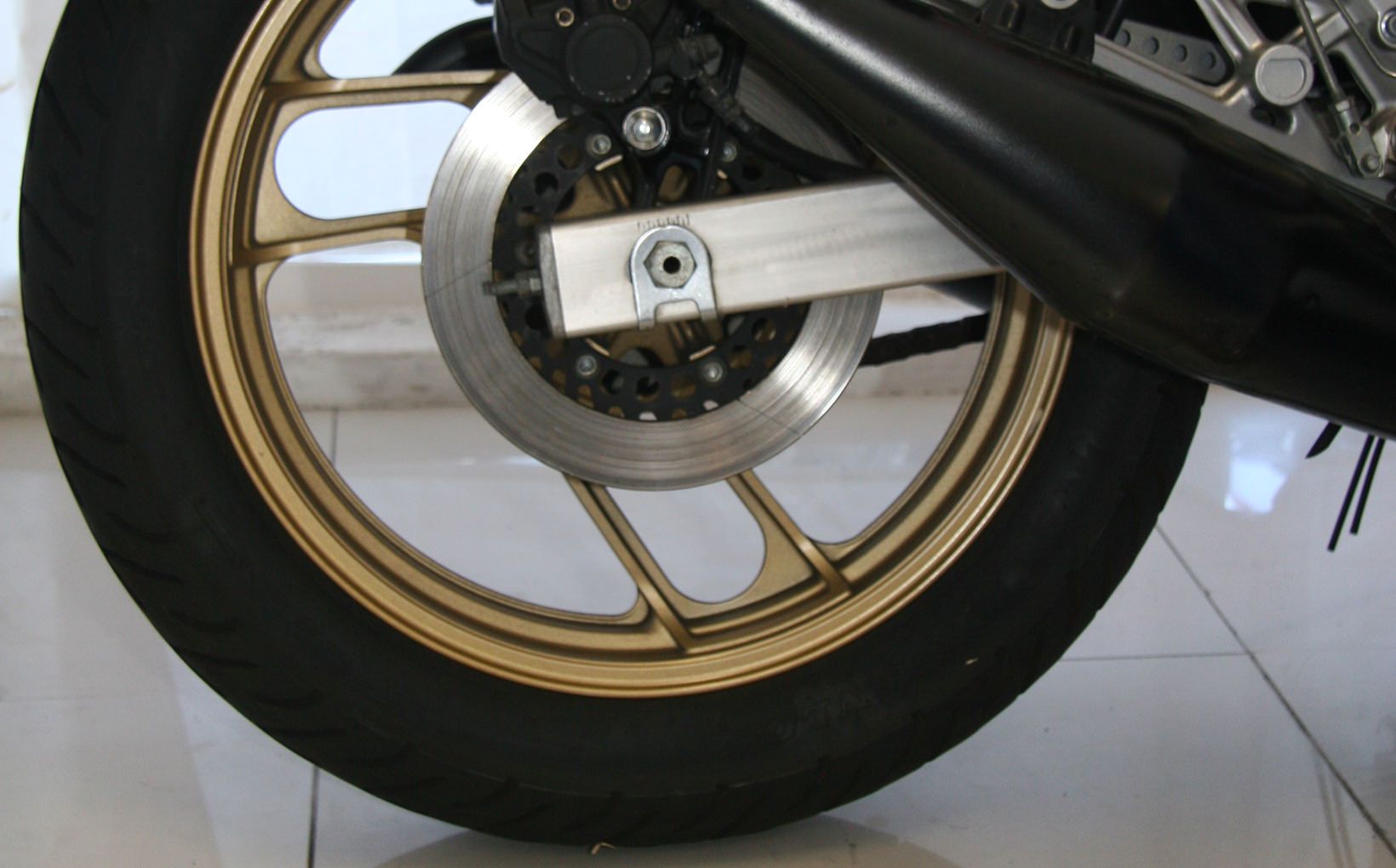 18in rear wheel and an alloy swingarm. 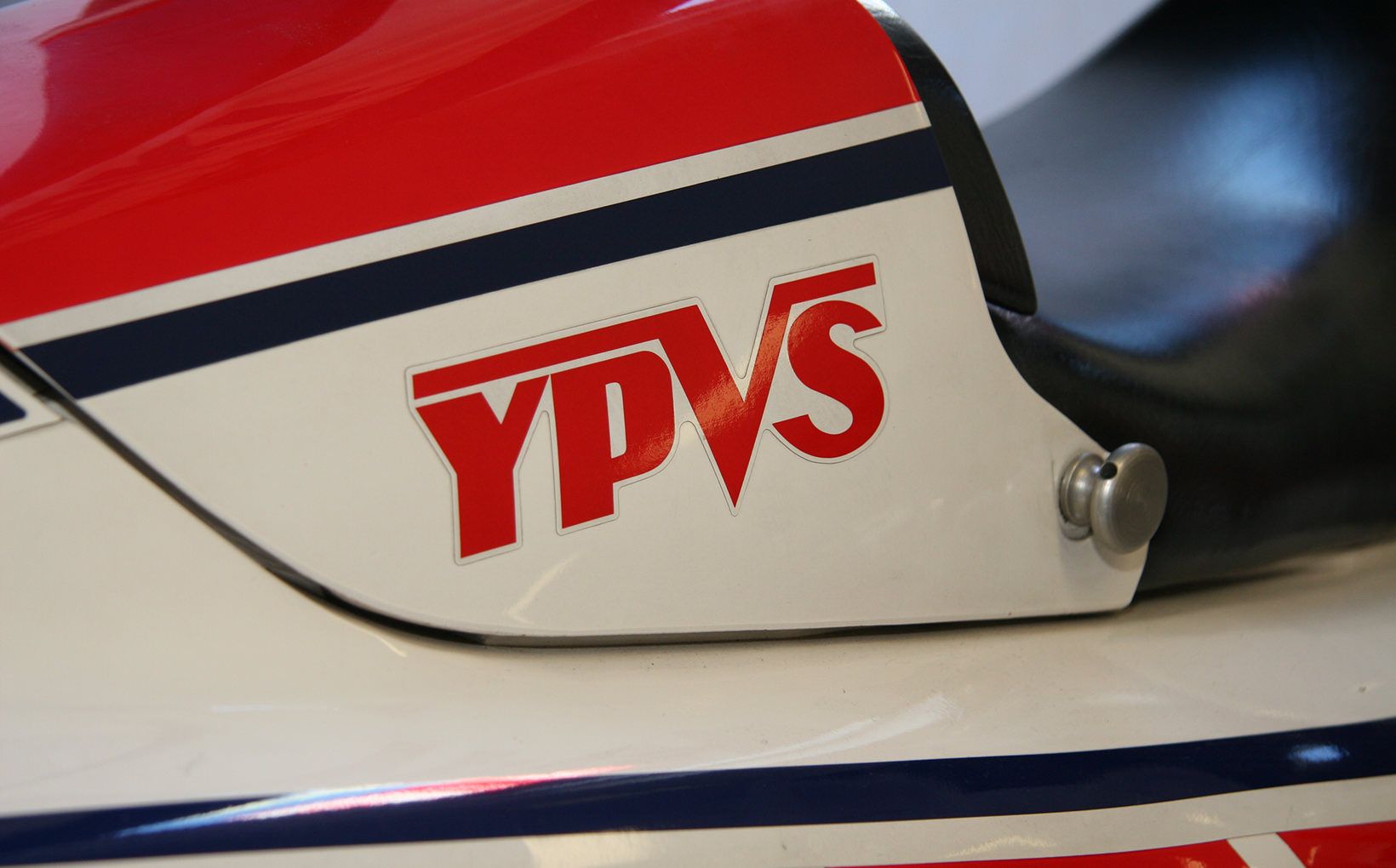 The RZV500R had a single seat race cowl.

Crank seals go, oil pumps gravity feed into the lower cylinders, carburettors flood the engine cases… The YPVS linkages flog out and the power-valves carbon up. Most likely it is the safest bet to keep at least five-grand up your sleeve for an engine freshen up… Chassis problems are usual wear and tear so steering-head bearings, swingarm linkages and pivot points, wheel bearings and brake calipers… all need rebuilding by now in general. 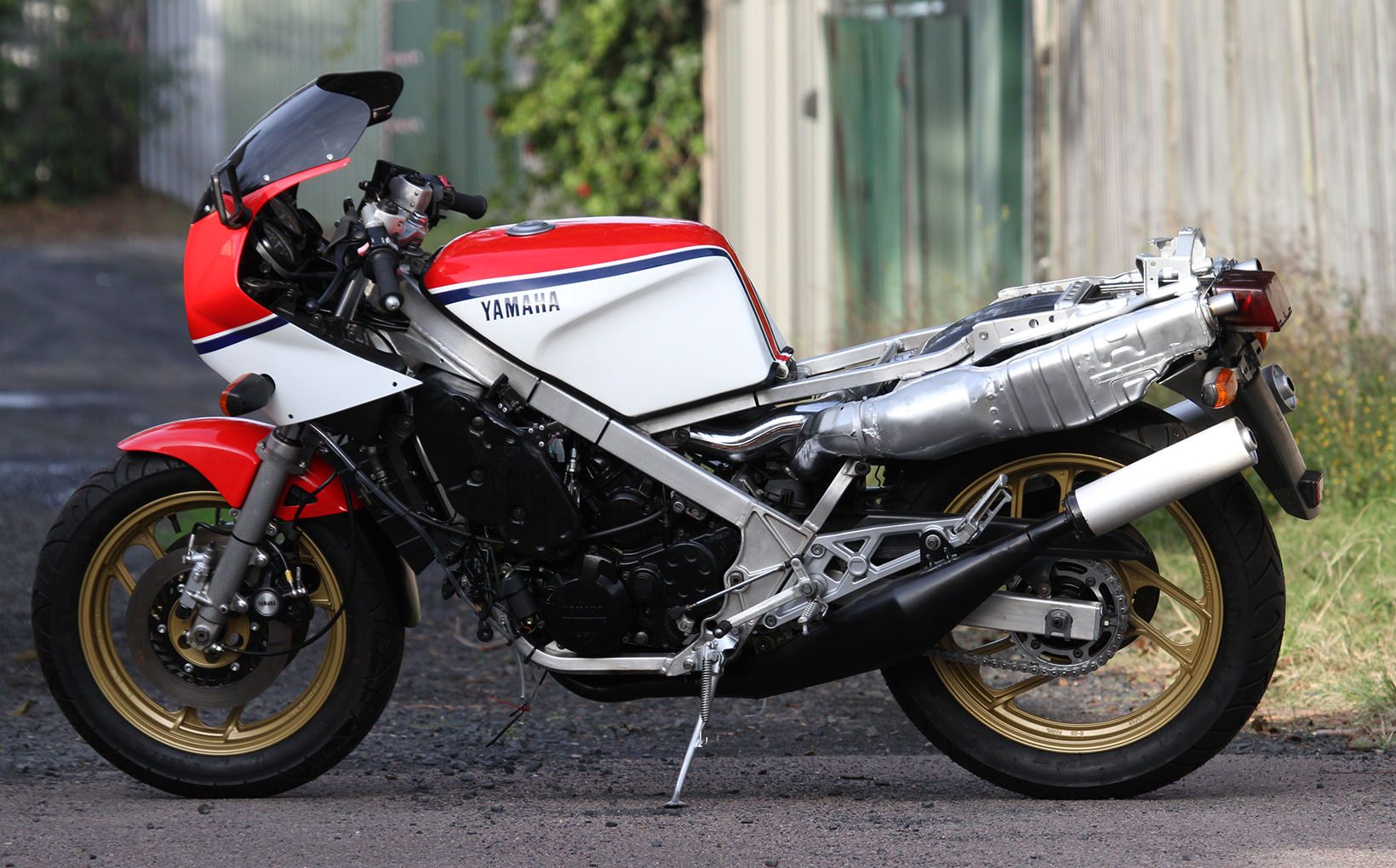 I just finished restoring this RZV500R for a mate, it was a full nut and bolt restoration…

-YZR500 styling for the street