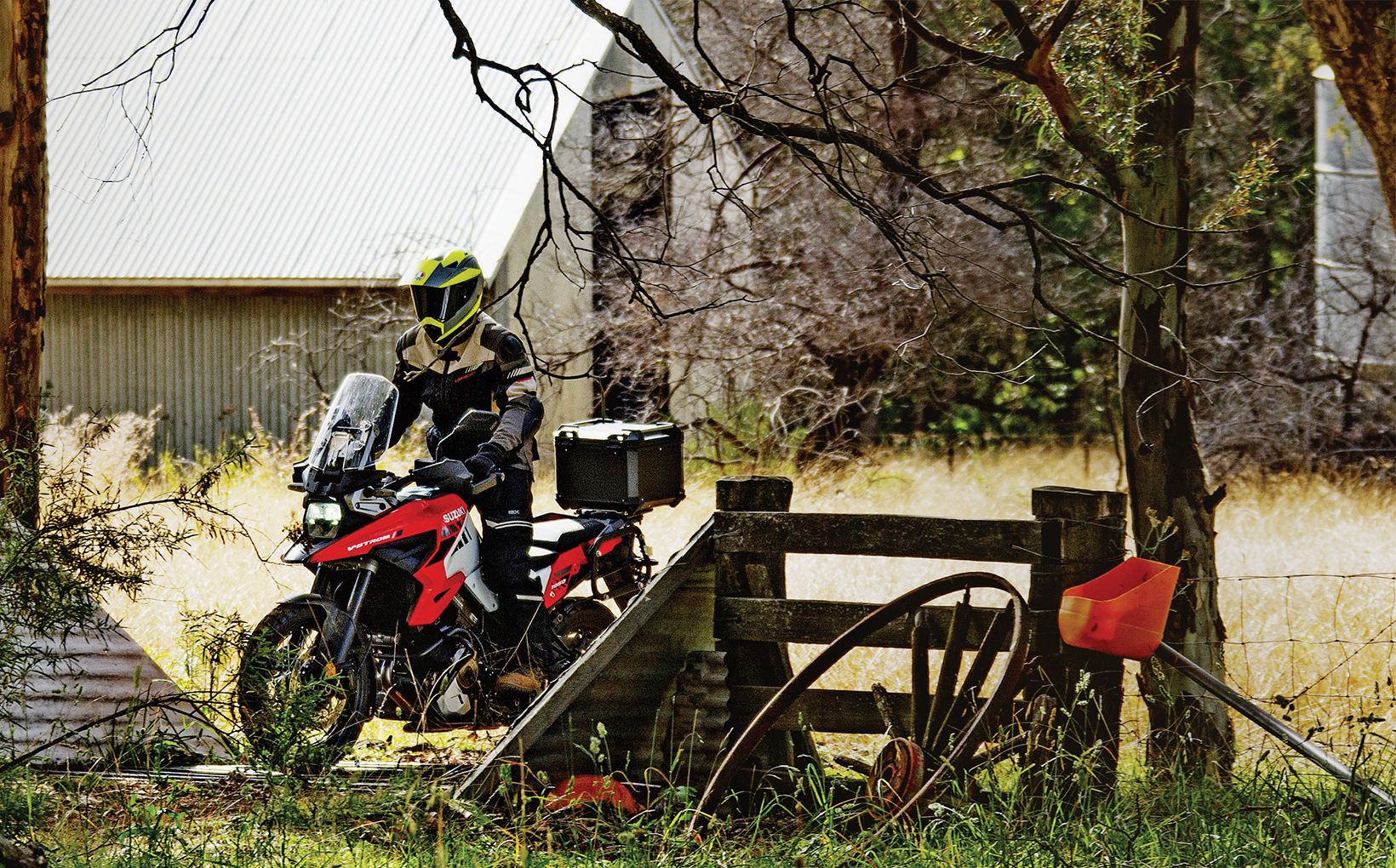 When is smooth too smooth? It’s a fair question when riding the 2020 V-Strom 1050, Suzuki’s new version of a bike so dependable and smooth, it can be hard to define it.

It looks awesome, the red version AMCN grabbed – for this test and for our mega Adventure test coming up next issue – based on the original Dr Big, the grunty single-cylinder 750 designed by the same bloke, Ichiro Miyata, back in 1988. That red is the closest Suzuki dared to go to the tobacco-sponsored Dakar weapon, but the overall look is effective. It is a head turner, and there’s no missing its Katana-like nose, but my gaze settled on the 19-inch front wheel pretty quickly, though.

A 19-inch front wheel, such as on the KTM 1290 S and Ducati Multistrada Enduro, says “we can kinda do Adventure, but not totally”. Fair enough, like lots of riders, and at the starting price (from $16,490 +orc), the V-Strom makes for an excellent go-anywhere machine, but without the full off-road credentials of some of its rivals. 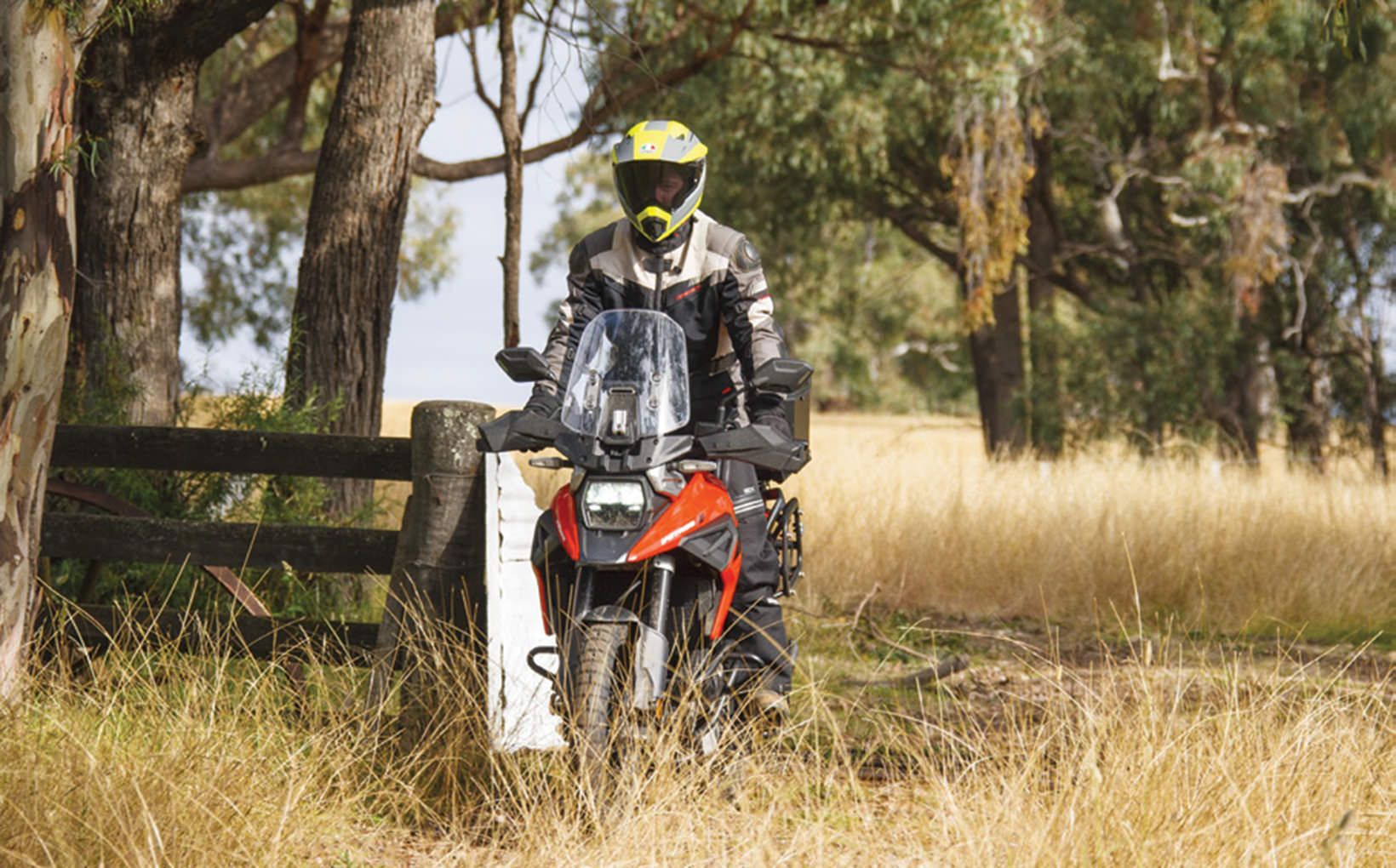 With that in mind, I set off on a 1000km round trip to a friend’s property near Narrabri, situated at the end of a fun 45km dirt road which gradually descended into a narrow goat track of a road. Would the Suzuki make it? Course it would…

I knew it would, because the updated engine is still based on the gem of a 1037cc V-twin it began with back in 2002. That means an incredibly linear V-twin with loads of traction and zero surprises with power delivery. Its claimed 79kW (106hp) at 8500rpm and 100Nm of torque at 6000rpm is shy of the million-horsepower KTM and BMW big guns, but it makes the power amicably and predictably. Just what I wanted for a wet Narrabri incursion. 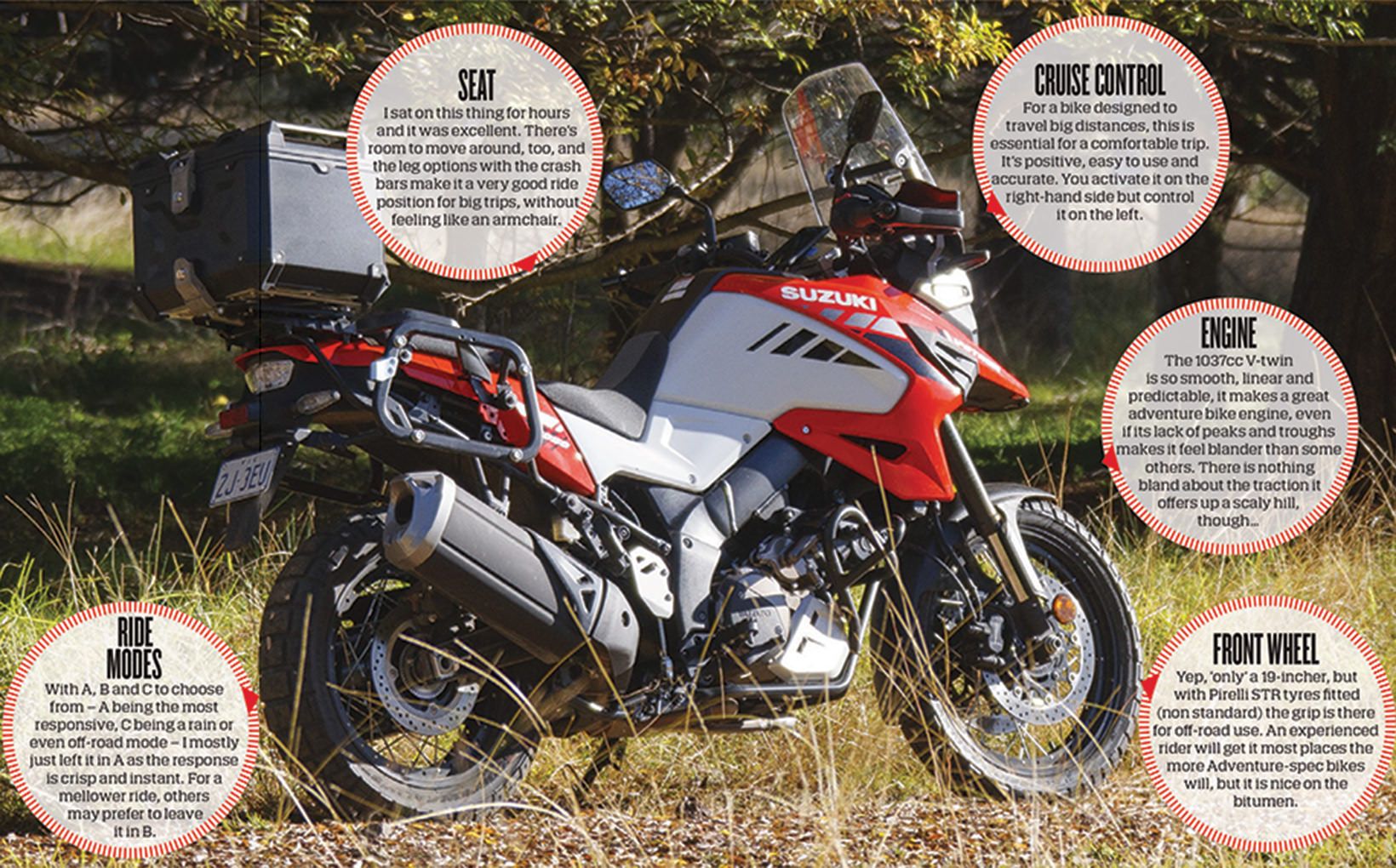 Importantly, I had a smooth partner for the long boring bits and, ta-dah, cruise control! The new bike’s cruise control is just part of the fresh electronic suite, but the most obvious addition is thumbing in the speed you want for long distance touring and letting the bike take over throttle duties. Cruise control on a bike makes a huge difference over big distances, so for the Suzuki to have finally joined that party may give older model V-Strom owners itchy chequebook fingers. Then there’s the rest of the electronics… 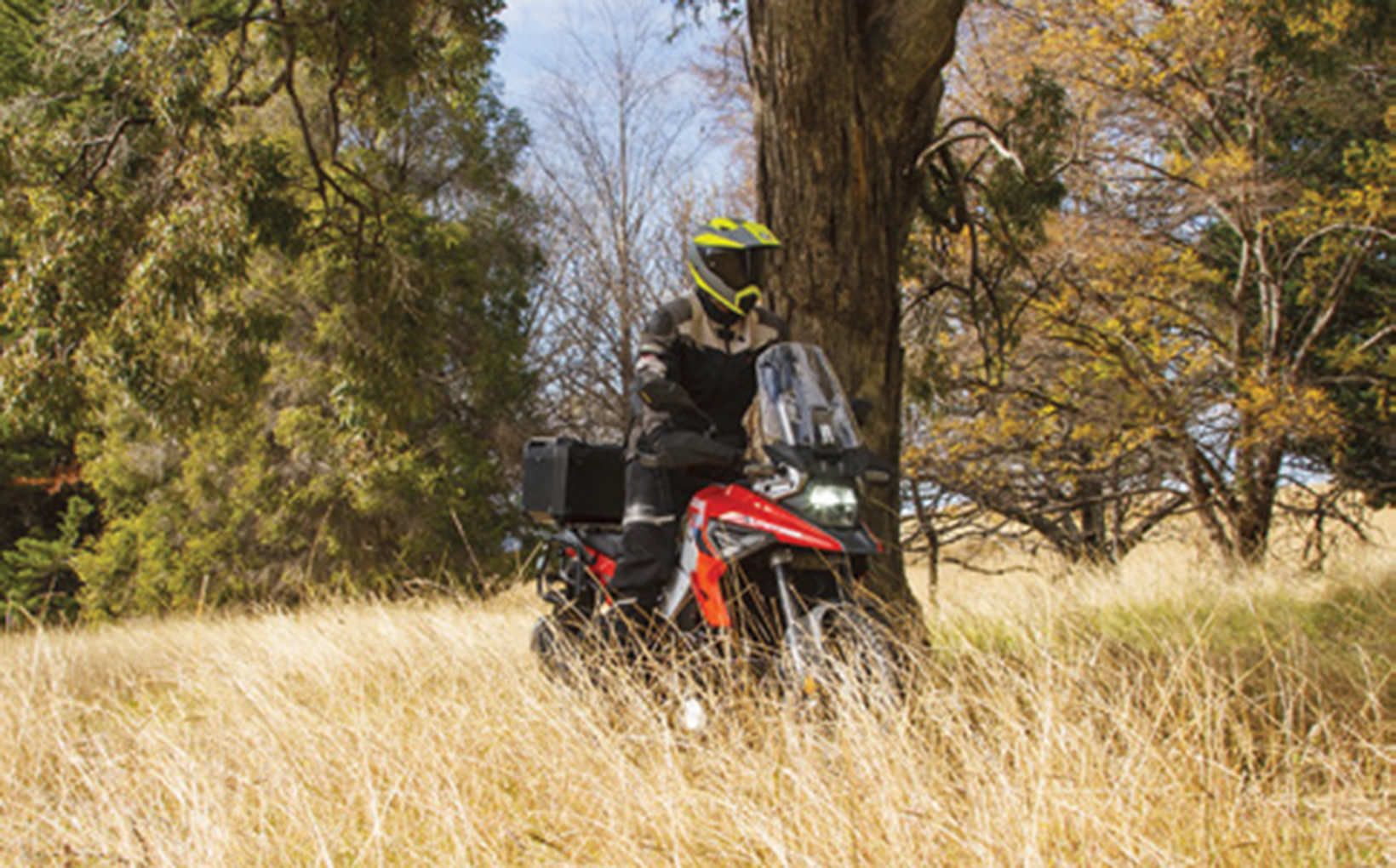 The Hill Hold control I don’t personally fancy; that’s what a rear brake and throttle control are for and it makes intentionally backing the bike up impossible at times. But if you’re new to off-roading, it’s a nice parachute of technology. The traction control is superb, particularly because when you turn it off, it stays off, until you switch it back on again, even if the bike has been turned off at the ignition.

This bike is the $18,990 (+orc) XT model, so the extra $3000 coin over the base model gets you tubeless spoked wheels, a centerstand, crash guards, a hand-adjustable windscreen, lightweight brush guards, and that excellent cruise control, on top of the above electronic goodies. 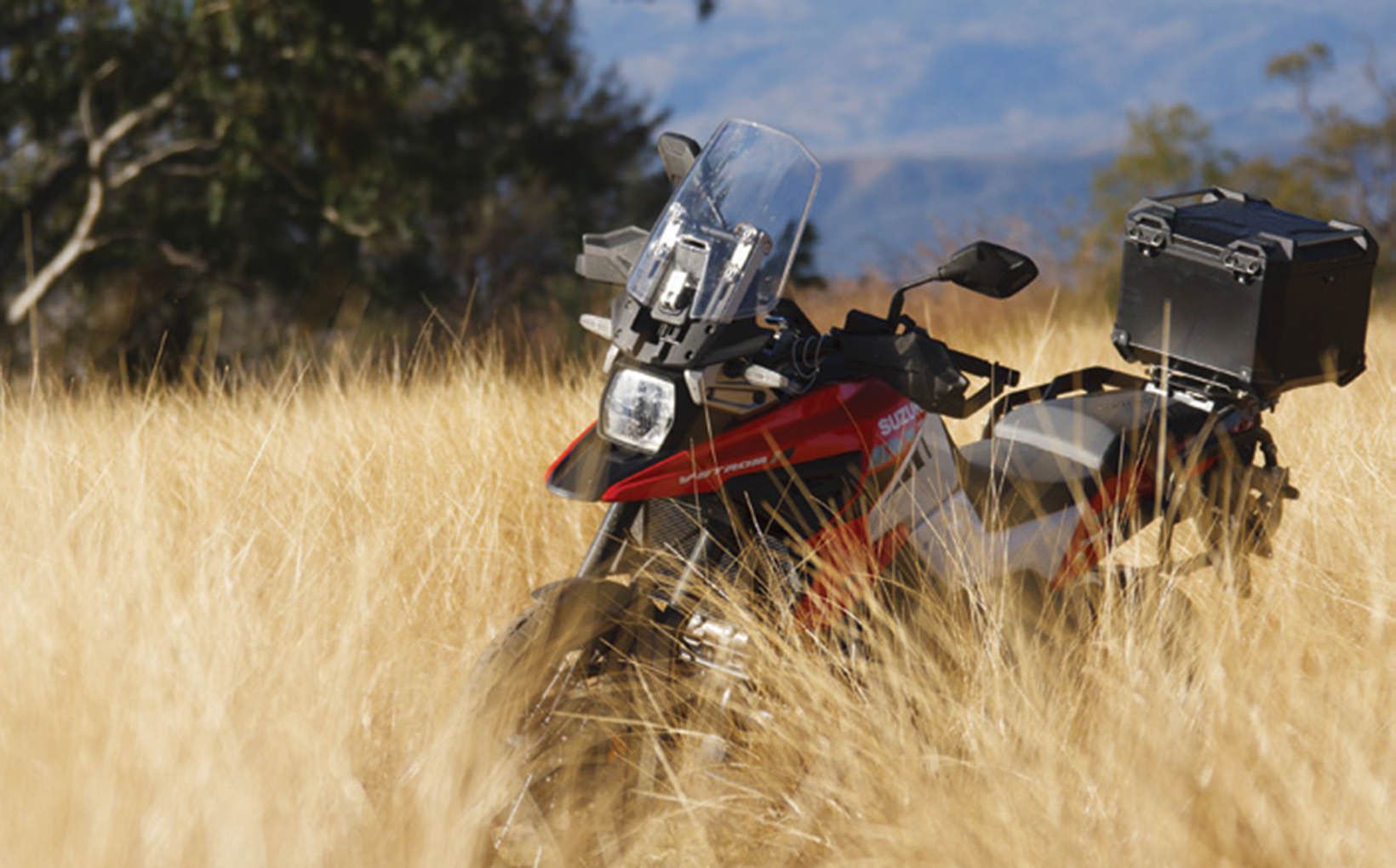 It was cold for my morning departure, and the model I rode had no heated handgrips because it was so new, the required parts hadn’t arrived in Oz yet. I had the screen adjusted to full height, strictly an off-bike manoeuvre to adjust, unless you like taking big, silly risks. The screen locks into place securely, but the buckle mechanism isn’t the prettiest, and having to dismount to adjust is a shame. I like to drop the screen off-road, then raise it again when things go all bitumen, so having to dismount to do it is a pain.

At 178cm though, there is zero bobbling of my Adventure-spec peaked lid, the wind noise is minimal and I sat on that seat for six hours straight, fuel breaks aside, with no problem. It

is not a draining bike to ride, and with cruise control running the show, it was a sweet place to sit. For hours.

I had a phone mount on the bars, and was tuned into my favourite music and podcasts, while the handily mounted USB port next to the dash kept the phone full of juice. I normally detest listening to such things while riding, but for a trip that long, it made the kays disappear quickly.

The engine crash bars are also perfectly shaped for hanging the limbs on Easy Rider-style, and I had three different leg positions for the trip, which I made the most of. 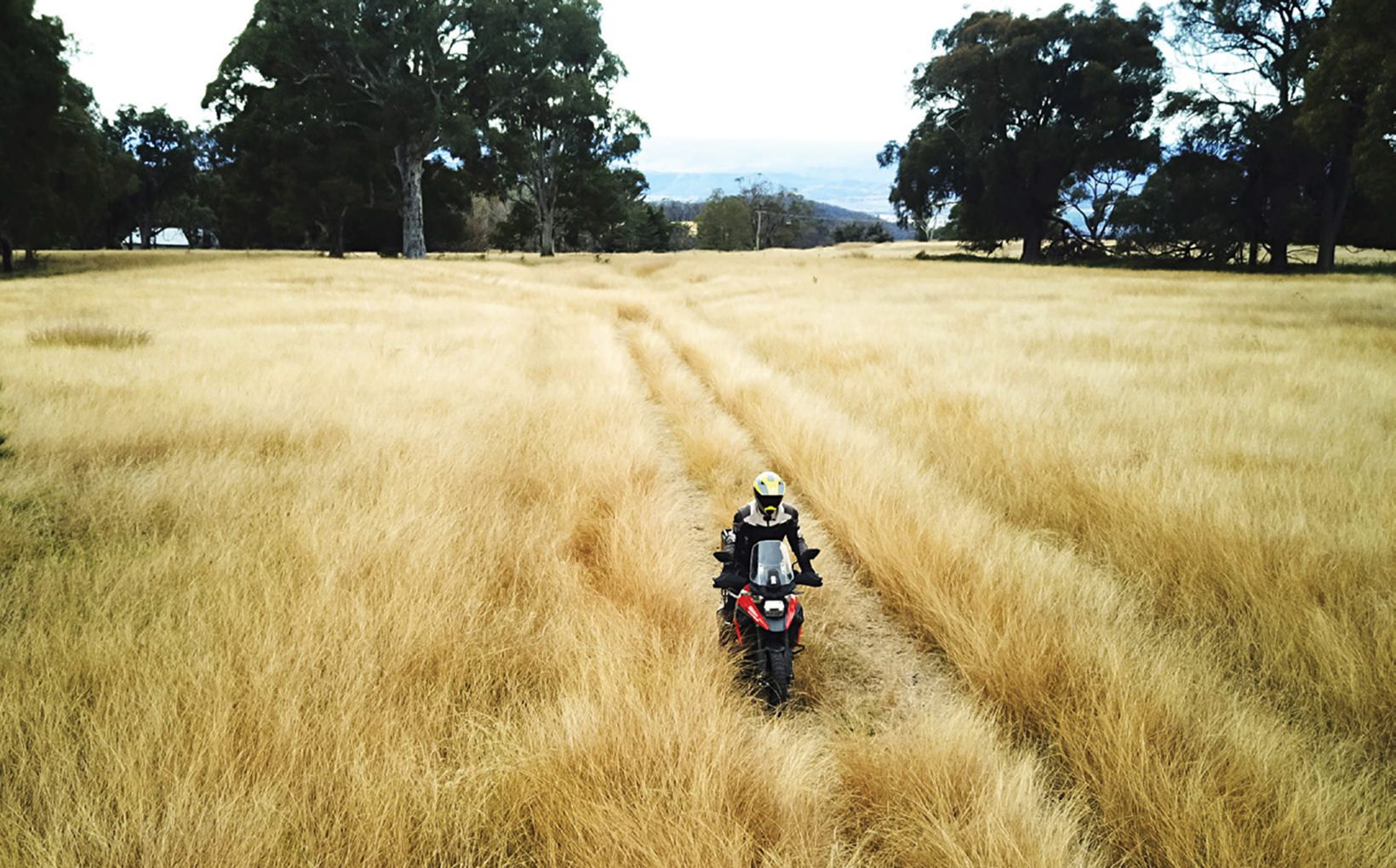 The test bike also came fully equipped with panniers and a top box, though I dumped the panniers for this trip in the interest of a lane splitting exit from Sydney (we take the panniers along on the Adventure test next issue). The Top Box is waterproof and lockable, not to mention very easy to both secure and remove, though like all top boxes it can make the bike a little top heavy when loaded up. The Suzuki is so compact, however, and well balanced, I didn’t find it a nuisance on the dirt or bitumen.

When the road finally turned to dirt, after an incredibly scenic run up some magnificent narrow bitumen back roads, the bike’s all-road nature is obvious. Some shallow creek crossings, damp soil and small erosion mounds made for a fun run, the Pirelli Rally STR rubber (Bridgestone Battlax Adventure A41 are fitted as standard) enough to even out the road focussed nature of the bike and just let me sweep through the gravel road into the property.

The property itself hadn’t been lived in for two years, so it got semi-gnarly on the run in, but with traction and stability, that’s all you need to make it over most things dirt road. The Suzuki lacks the ground clearance of a more off-road focused Adventure bikes, and the KYB suspension is sweeter on road than off, but I never got a fright as the Suzuki took me to my weekend away.

Not long later, it took me home, too. My action-star eldest son had KO’ed himself at the skatepark, so weekend over and a stressful ride home. I left late and in a mild panic, so it was dark when it got home.

Fuel range is excellent, though, with an easy 350km at highway cruising speeds achievable, and without the oversize tank some others need for this feat. I averaged 6.5L/100km for the test. Monitoring said usage, however, brings me to my one real complaint of the V-Strom, and that’s the atrocious dash arrangement.

I pardon the lack of TFT dash, but the item we are left with uses very similar fonts, font sizes and colours to make for an alphabet soup of info. Even after two weeks, my eyes rarely landed where I wanted them to when I was looking for info and it simply doesn’t match the rest of the bike’s practical feel and look.

Thumbing through the three power modes (A, B and C, but no specific off-road mode) is easy enough and I like the simple button arrangement on the left bar to get through most features, it’s just a shame it takes so much looking to find what you are after on the dash. 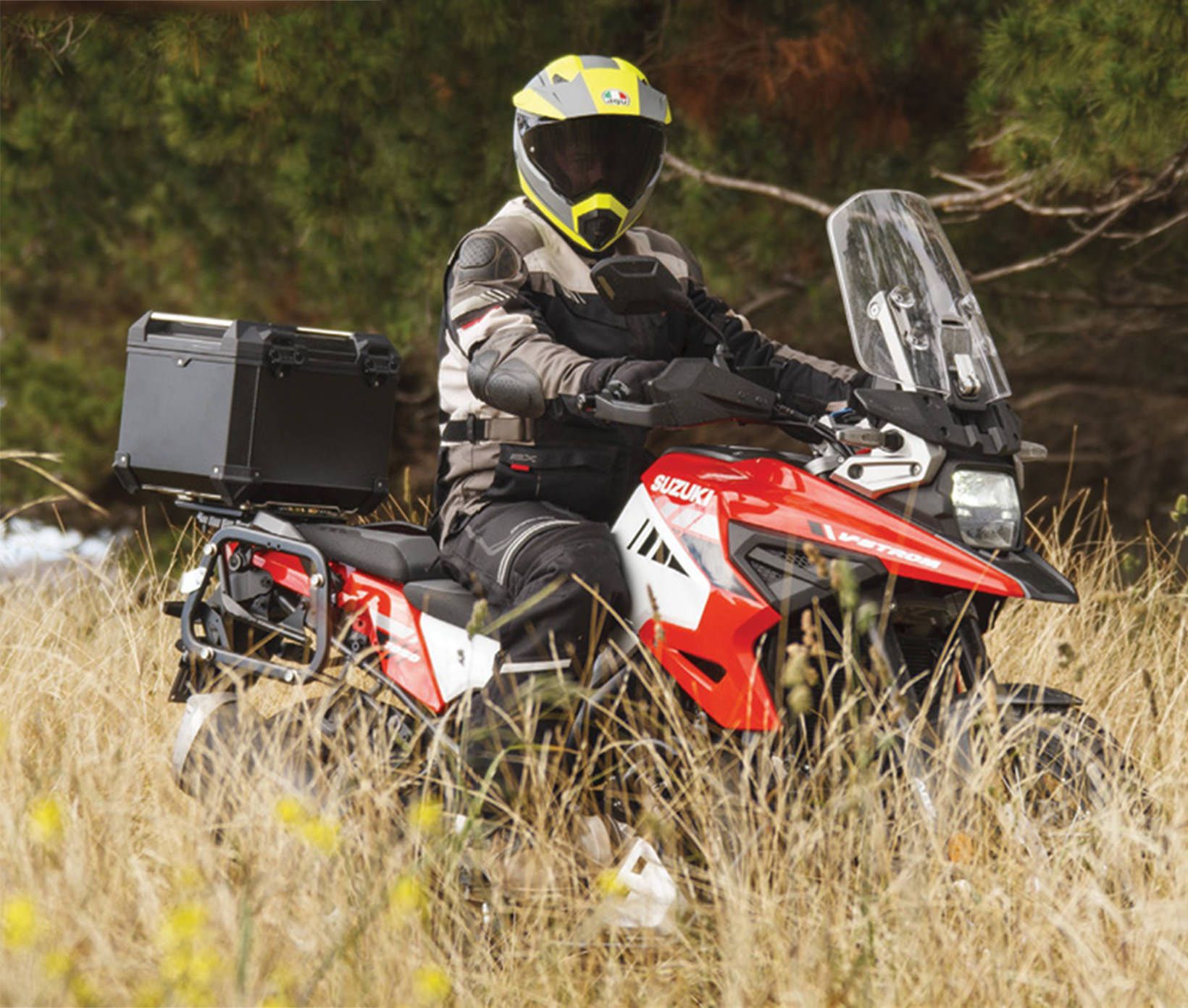 Suspension on a go-anywhere bike has a lot of compromises to make, needing to be soft, hard, firm and supple depending on where you are and what you are doing. Then you have to include dealing with the ample luggage capacity (the optional pannier and topbox set is $3599 [add $100 if you want silver]) and good pillion accommodation. It’s a big ask. Suzuki’s KYB boingers slot into a nice middle ground for me, offering feel at the rear on the skatey gravel roads I enjoyed, without kicking me hard in the butt over road zits. It steers well and holds its balance when pushing though the fun bitumen bits, but without the magic carpet ride of more expensive bikes.

It does work well across all those parameters, though, and the rear spring preload is easy to adjust thanks to the external adjustment knob. This is a godsend when the panniers and topbox get filled up, or/and when a pillion gets involved.

The engine feels comfortable making the power it does, and its steady increase in grunt through the rev range is impressive, rolling out incremental. In general, I think adventure bikes have too much grunt for the dirt, but the V-Strom’s 100-odd horses are spot on. 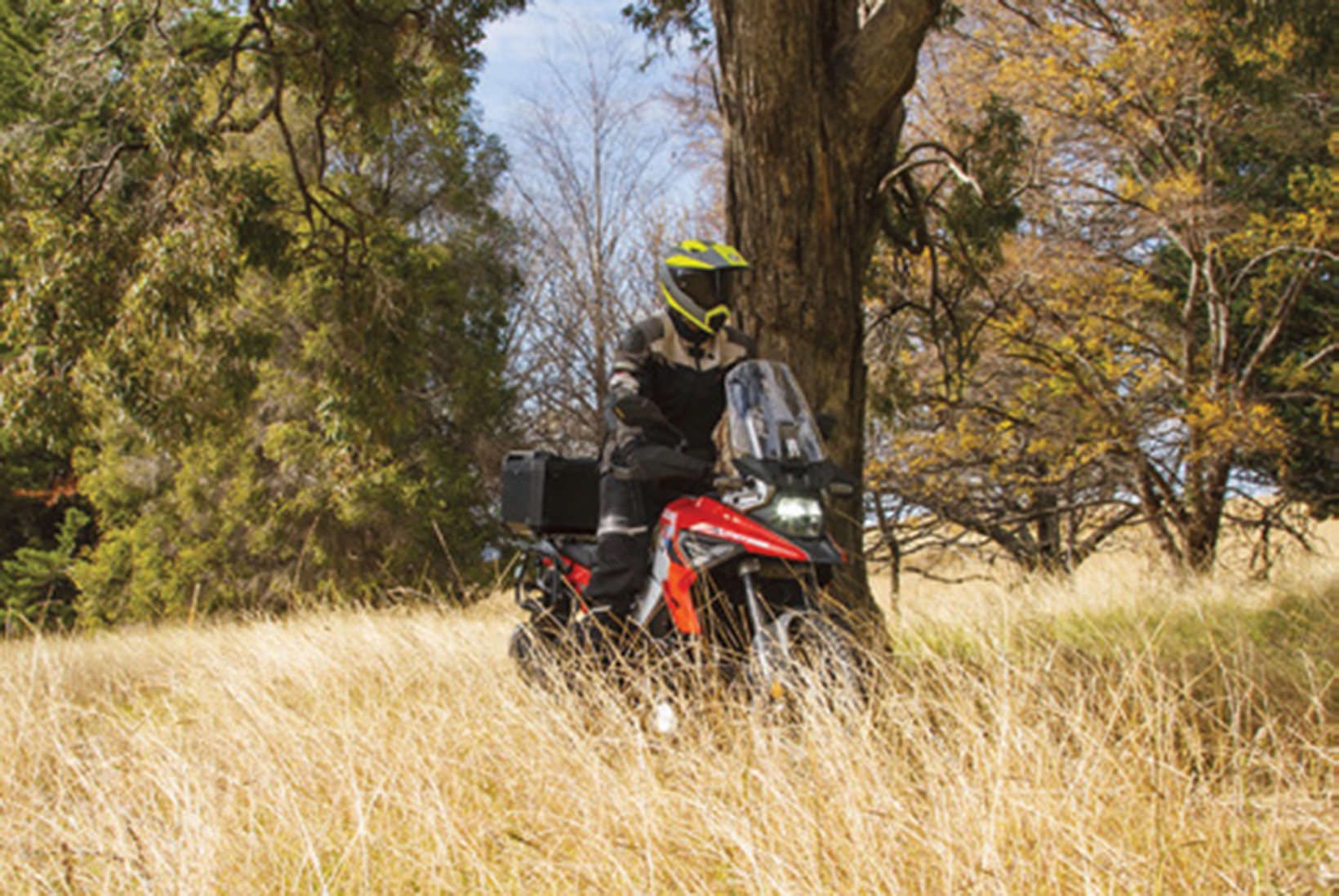 Overtaking on the open road is as easy cracking the throttle, but there isn’t the blistering acceleration that, quite frankly, gets more adventure riders into deep shit than it should with the bigger-horsepower bikes. It’s not what you have but how you use it. The V-Strom’s engine dolls out the grunt with such predictability, I found the dirt as fun as the road, with no stressing I would become part of the scenery thanks to too much throttle.

It’s a sweet engine, making a distinctive (albeit muted) Suzuki note and with all the power we need off the road and enough for on. The engine suits the bike, which is smooth, refined and the kind of allrounder it’s easy to live with. It hasn’t change much since inception and doesn’t need to. If you dine off too much power, this bike isn’t for you, but if you like being able to use what it has, it will delight.

If you are the kind of rider who likes to disappear down tracks of unknown destinations, the harder core 21-inch front wheeled off-roaders like the KTM 1290 Adventure R are a better bet for you.

But if riding something that does everything universally well, off road and on, in town, on country roads, alone and with a pillion, then Suzuki’s latest V-Strom is still an excellent option. The dash is disappointing, as is having to get off to adjust the screen, but the rest of the 2020 add-ons are superb, while that little-changed V-twin – now Euro-5 compliant – continues to punch above its weight in rideability.

Because the 2020 V-Strom 1050 XT is so universally competent, it lacks some of the character of more narrowly focussed machines. But as a life partner able to cover almost any of the terrain the average rider wants to attempt, it is an excellent garage filler. We will have a better idea of how it fits in the off-road stakes after our upcoming adventure issue (on sale July 30).

While it looks like an Adventure bike, 19-inch front wheel included, it really is still an excellent all-rounder. If it never hit the dirt, an owner would still enjoy its road manners, linear engine and fuel range.

It would be a shame not to take it down the road less travelled, though, because it will take you down that path, as long as you weren’t trying to make it at Dakar pace. Being able to comfortably navigate the dirt opens up so much more touring potential in Australia, so if pointing somewhere unfamiliar on something that can get you to work appeals, Suzuki has a bike you need to try.

The new electronic suite brings the bike in line with what people expect from a modern bike and Suzuki didn’t mess with that engine, save to make it Euro5 compliant and add six claimed horses while they were at it. This adds up to worthy reasons to upgrade your old V-Strom, or try the Suzuki for the first time.

Rider modes A, B and C