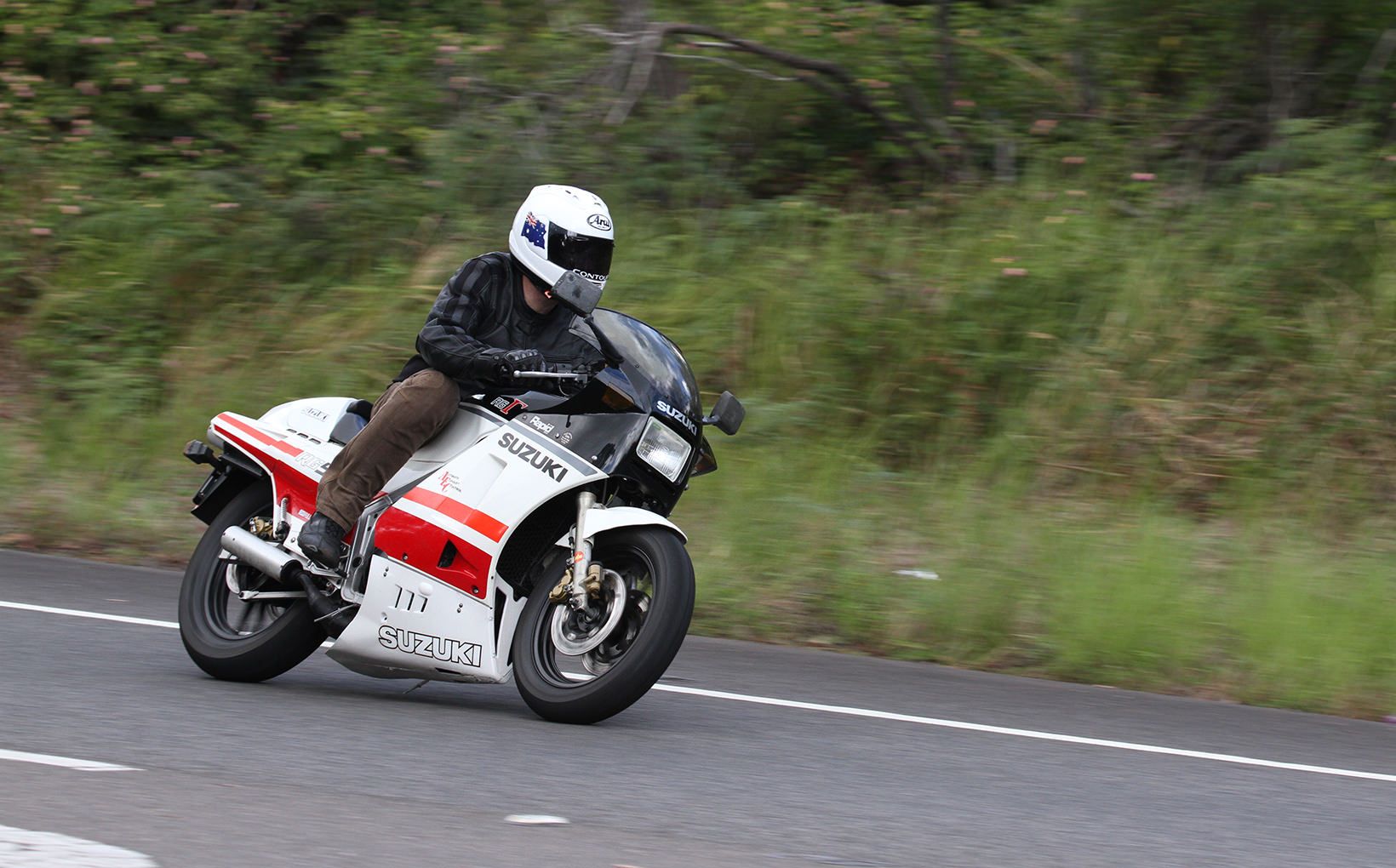 For two-stroke nuts there is no greater road bike than the mighty RG500… it is highly collectable, arguably not as cool looking as an RZ500 but still out performs one and is one of the only true 500cc GP road going replicas. They sound awesome, look trick and are fun to ride. 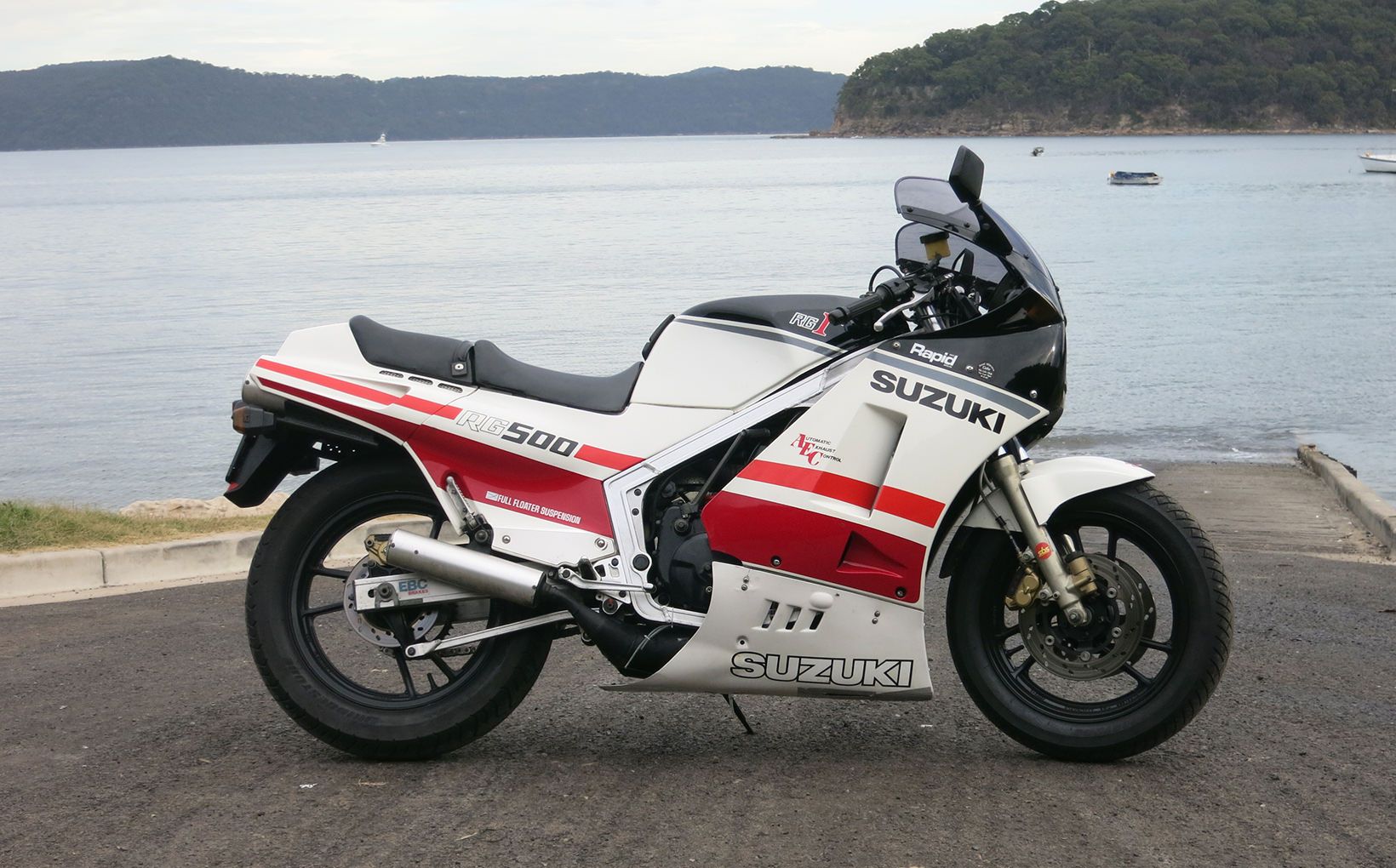 These colours were rare in Australia as most customers preferred the traditional blue and white, with many dealerships converting bikes to those colours…

I picked up this RG500 in 2018 and I fully restored it. It is Australian delivered and has not been ridden since 2001, so needed a fair bit of work to get it safely running. It's extremely original right down to the toolkit, screen, grips and even the original carby flood tubes! The wheels needed painting back to black to make it completely original...

There is no denying that riding a large capacity two-stroke is just about as exciting as it gets when it comes to motorcycling and probably none more so than the RG500. 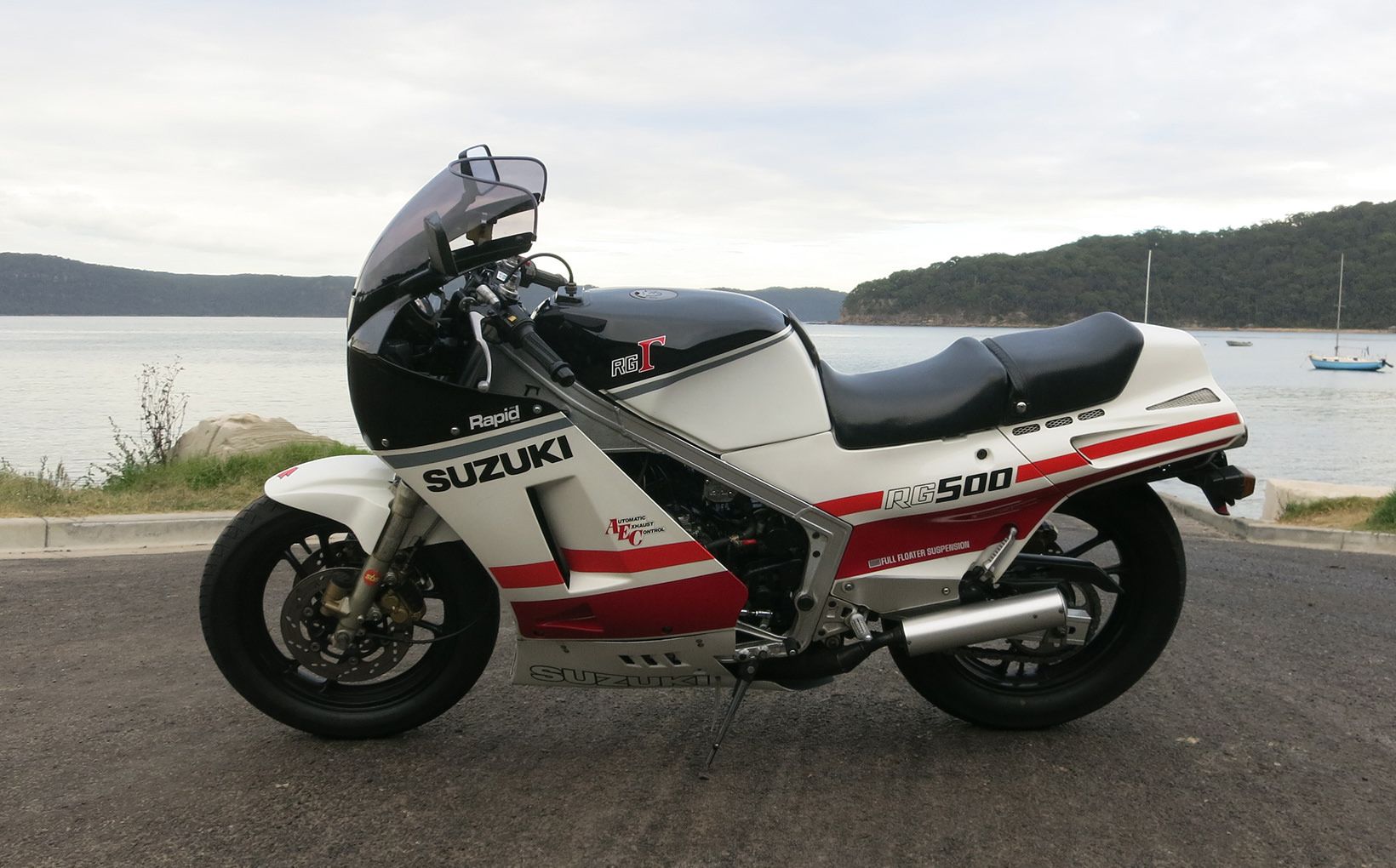 The RG500s direct competition was obviously the RZ500 but where the RZ was somewhat floored when it came to handling, the RG wasn’t. The bike was super-light at only 175kg wet – that’s 22kg lighter than the GSX-R750 – and had an all-alloy frame that cradled the square-four two-stroke engine. 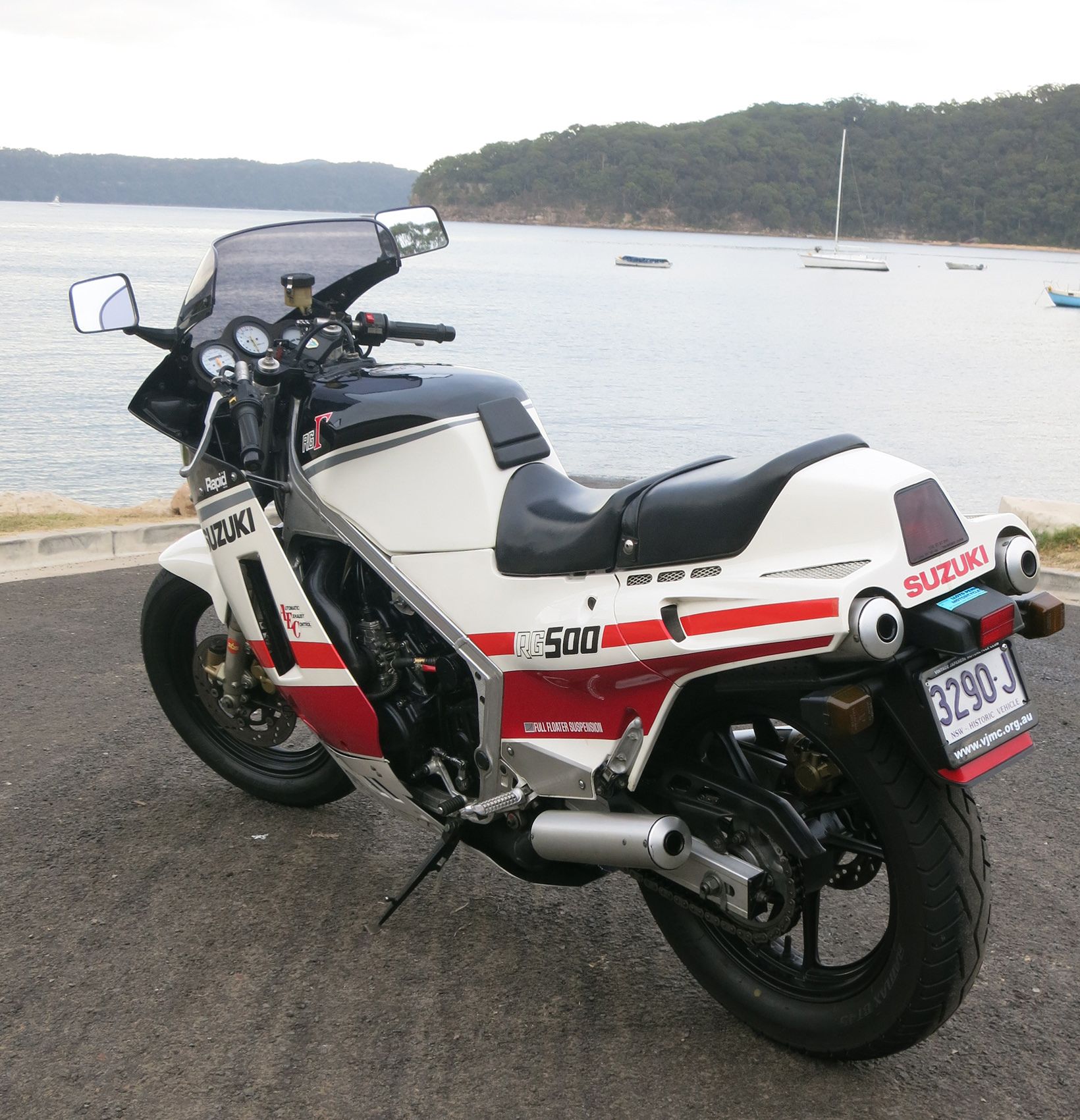 The RG500 was lighter and more powerful than the RZ500 Yamaha.

The colours shown were never particularly popular so back in 1985 many dealers swapped the colours over for blue and white, making the black/red/orange rare now.

The bike also had full floater rear monoshock suspension and an alloy swingarm – couple that to a small 16in front wheel and you had yourself a very fast steering bike with razor sharp handling (for its day). Although, with only a 120 wide rear tyre, don’t expect the grip to be massive. 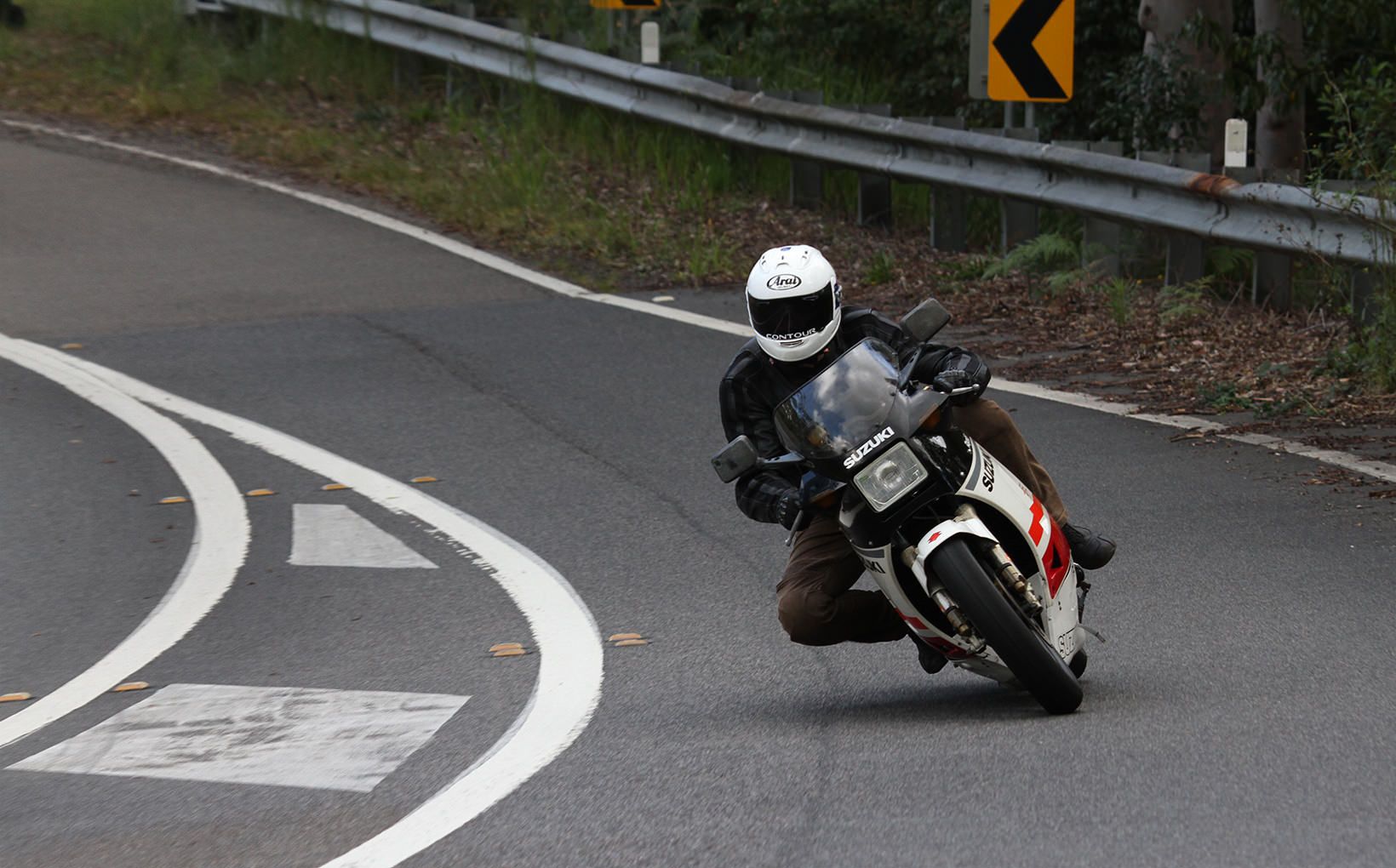 The square four twin crank two-stroke engine was based on the GP RG500 and made 95hp in the very safe conservative tune they were sold with. A set of expansion chambers, port work, bigger carburettors and less restrictive airflow really opened these up to real animals back in the day, but these days a standard one is the more sought after.

The engine was almost an exact copy of Barry Sheene’s World Championship wining engine from ’78 and ’79 and has four water-cooled cylinders that are arranged in a square above the two crankshafts and the pistons are set at 180 degrees to each other so that they fire in opposite pairs – giving perfect mechanical balance. 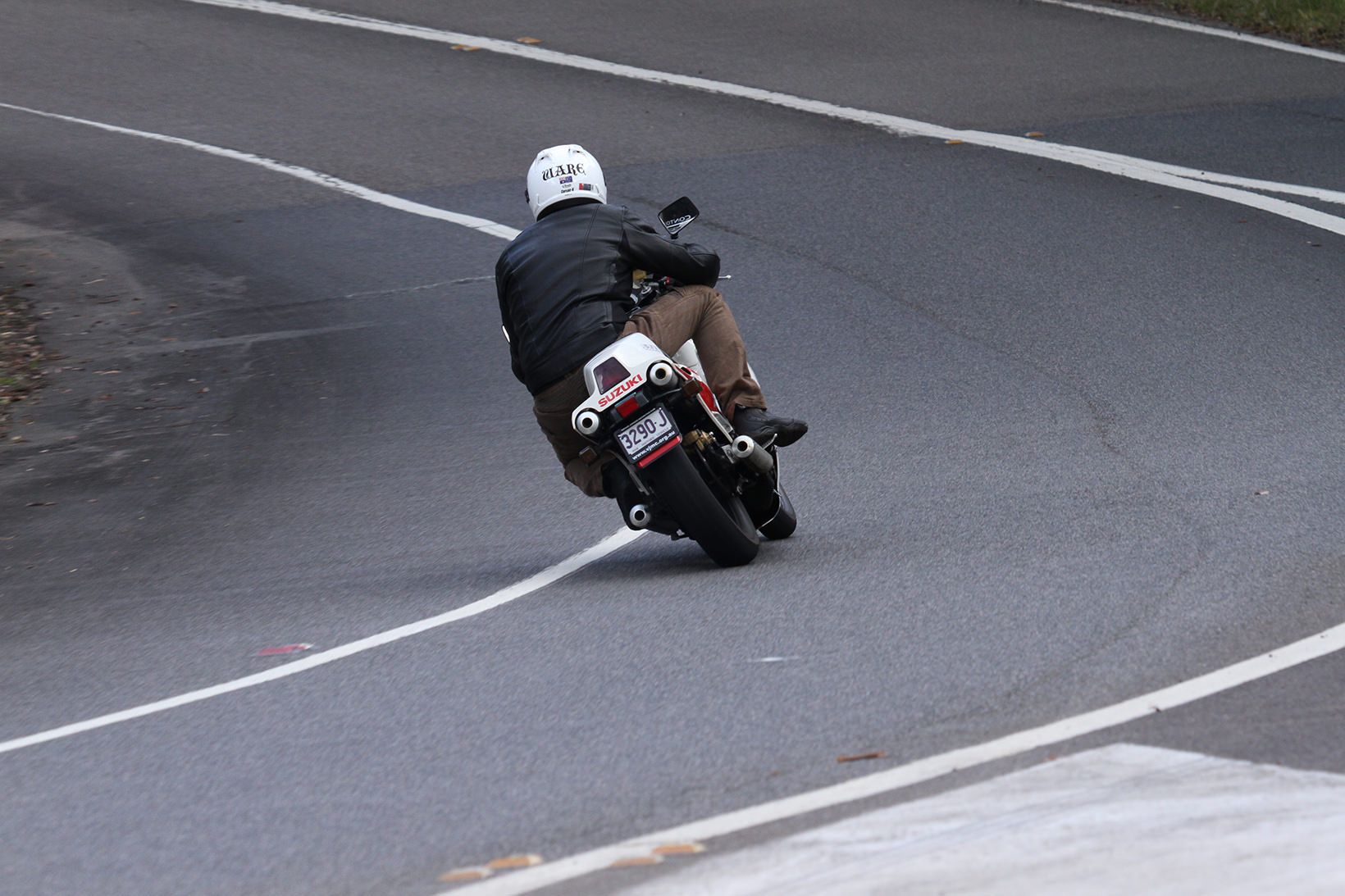 Four loud pipes out the back, a screaming oil-burning two-stroke, Sunday morning runs don’t get any better…

At the time 95hp was an astonishing figure, especially from a super-light 500, it enabled the bike to reach a top speed of 225km/h. To stop all this speed, the RG was fitted with powerful 260mm dual rotors with four-piston calipers and because the bike was so light the brakes were sensational.

If, like us, you’re addicted to the smell of burning two-strokes, then this is the bike for you… 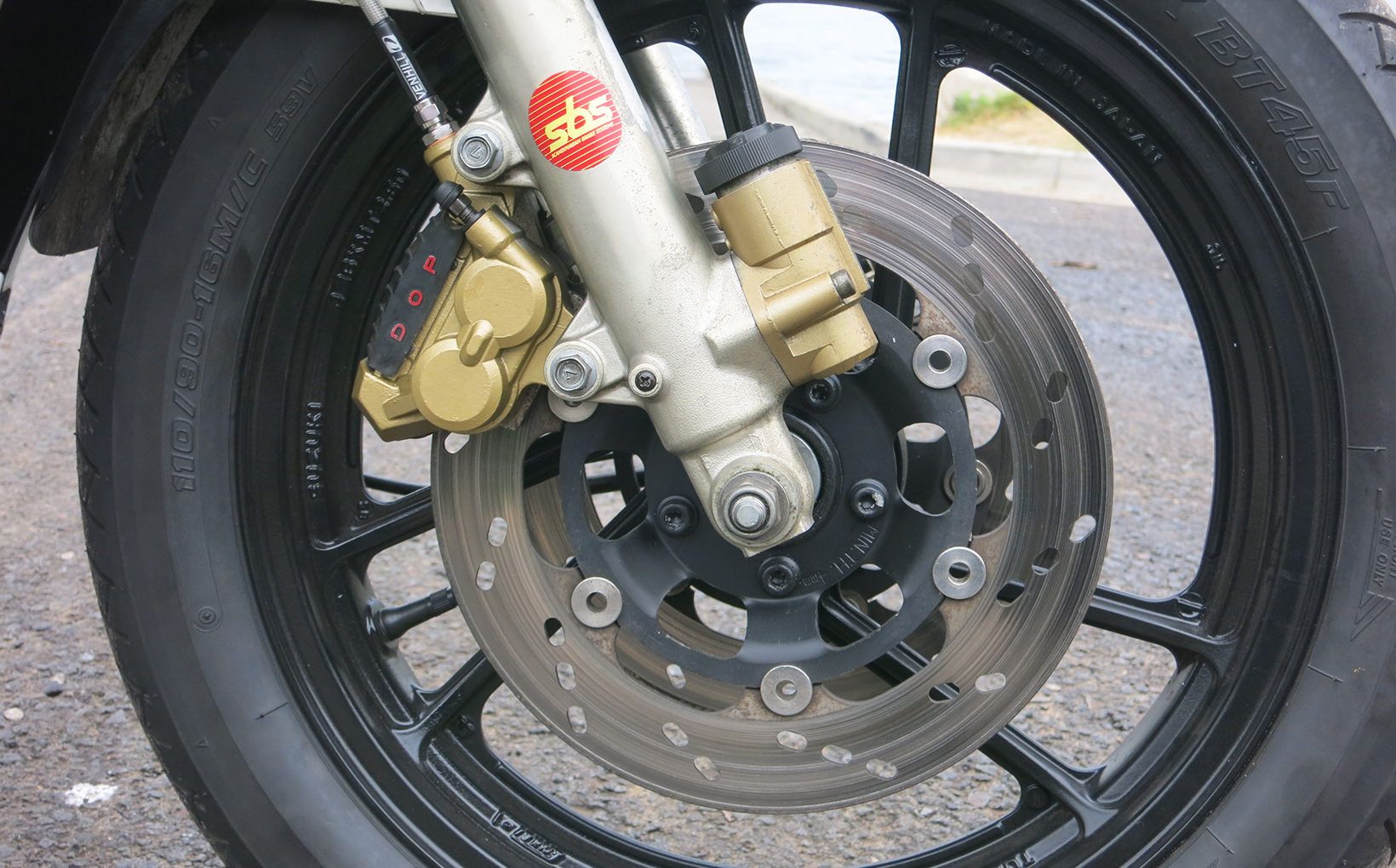 Powerful brakes and anti-dive front forks, with a small 16in front wheel. 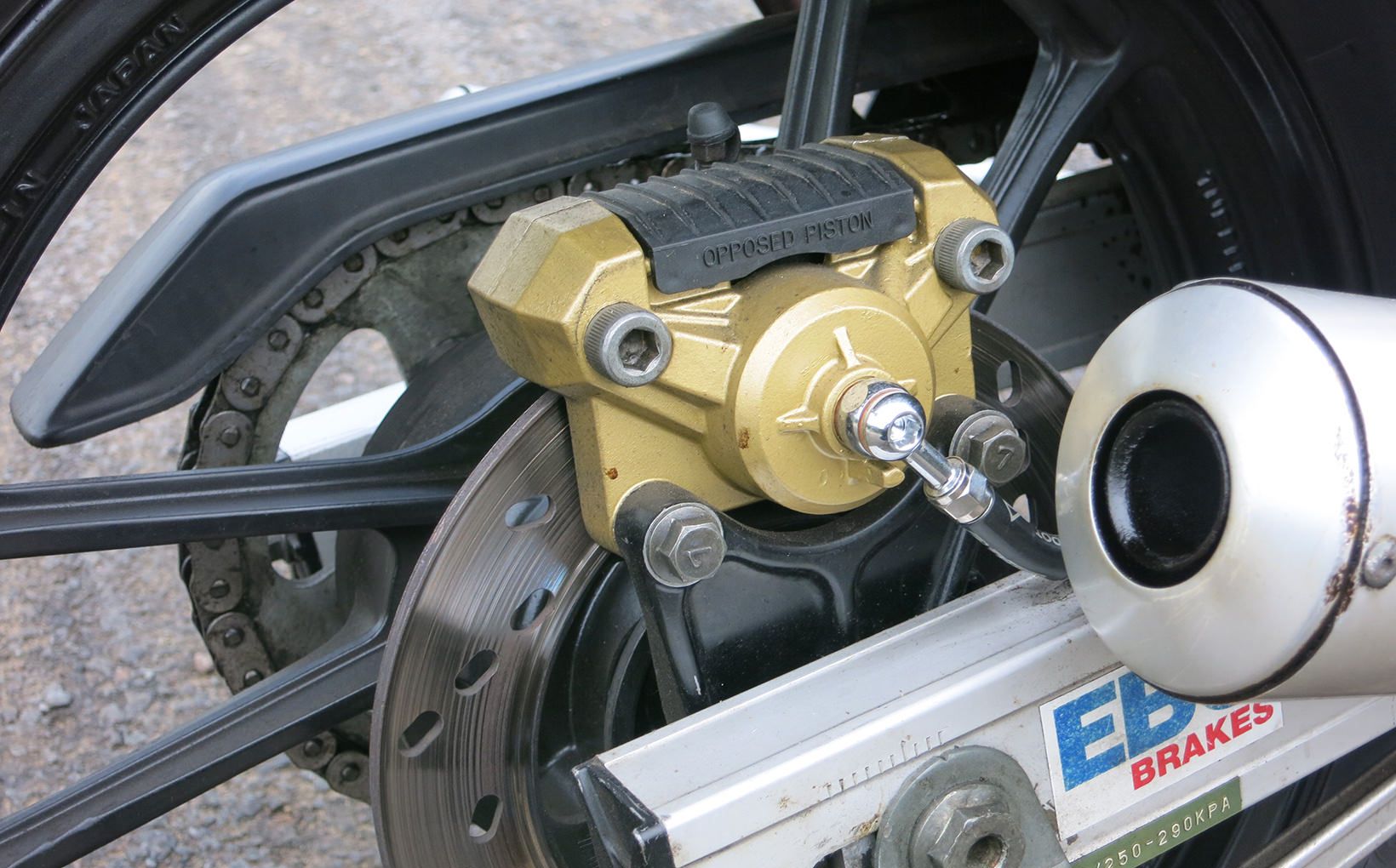 Full Floater suspension. I rebuilt the linkages and rear brakes but not the shock. Regularly ridden bikes will benefit from a modern shock.

A two-stroke engine is a funny animal. By design it requires more maintenance than a four-stroke due to the oil being mixed with petrol to lubricate the top-end. This results in oily plugs, pipes and rings and if the oil isn’t being sent from the pump at the exact ratio then you can have problems – even complete engine seizure. 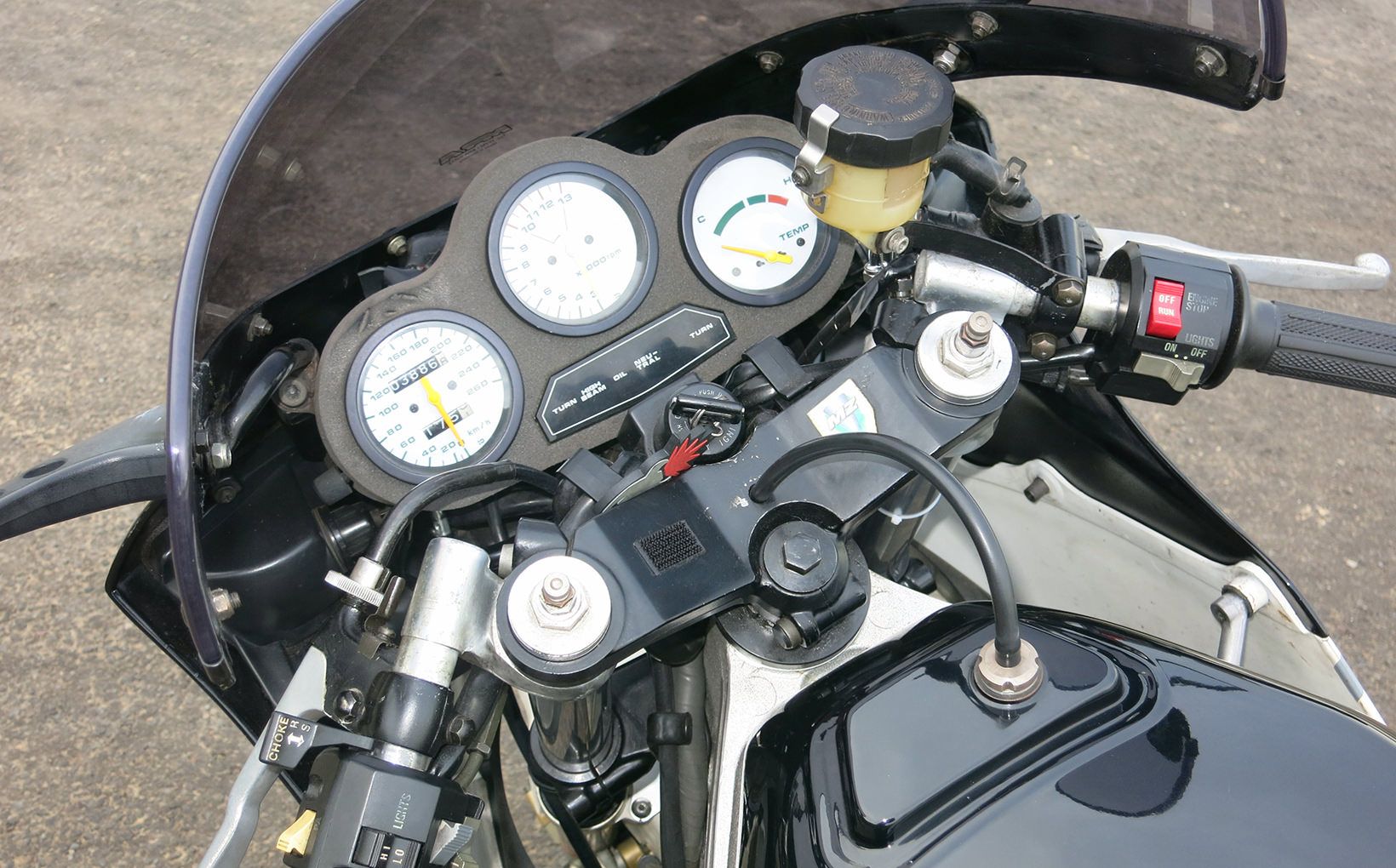 Another problem is if the bike sits for a few years, the crank seals become brittle and even rust can form on the main bearings and little ends – this is due to the two inlet ports always being open allowing moisture to enter. 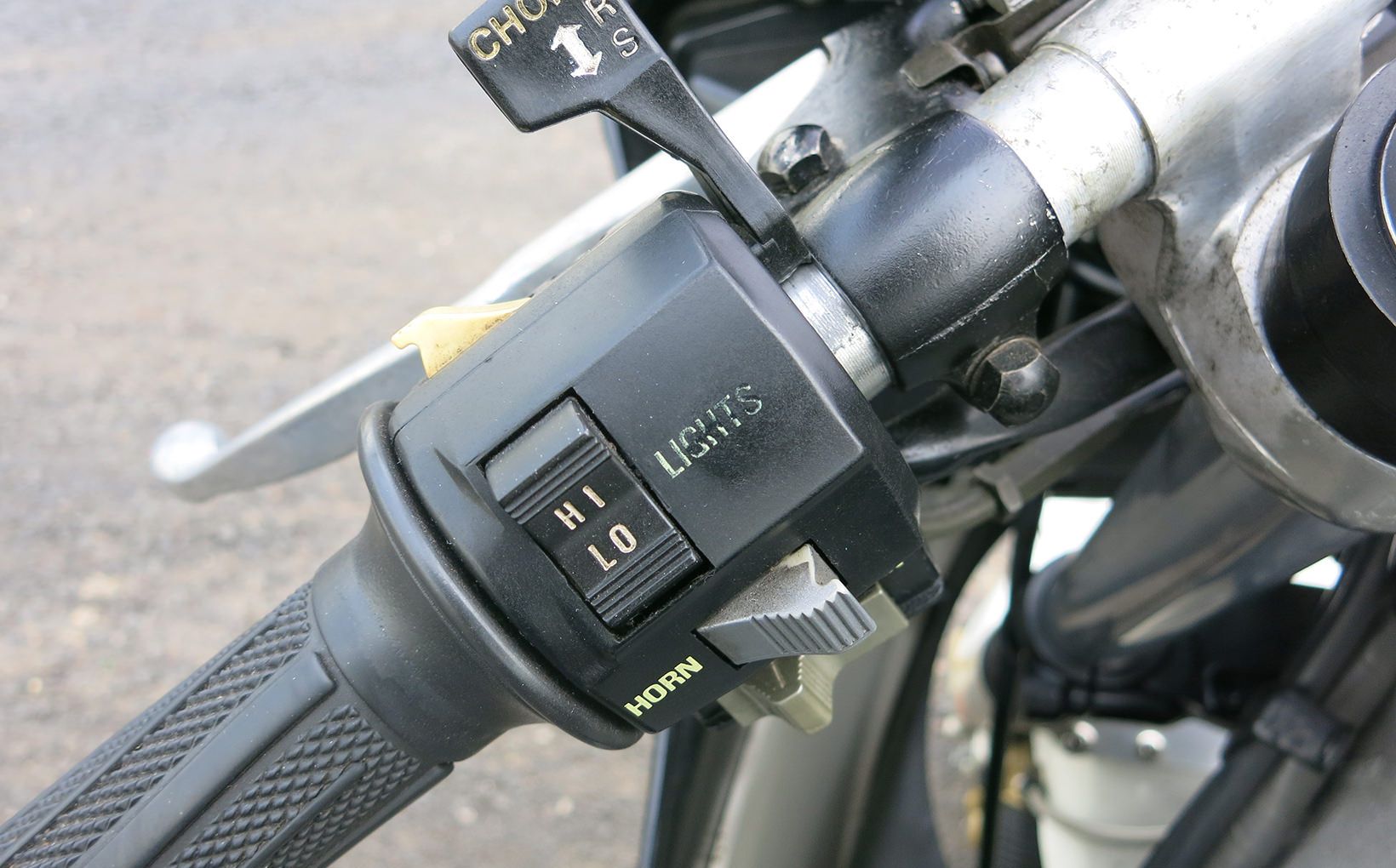 Original stock switches and grips. Chock lever… you don’t see those too often! Only the two rear cylinder carburettors have chocke plungers. 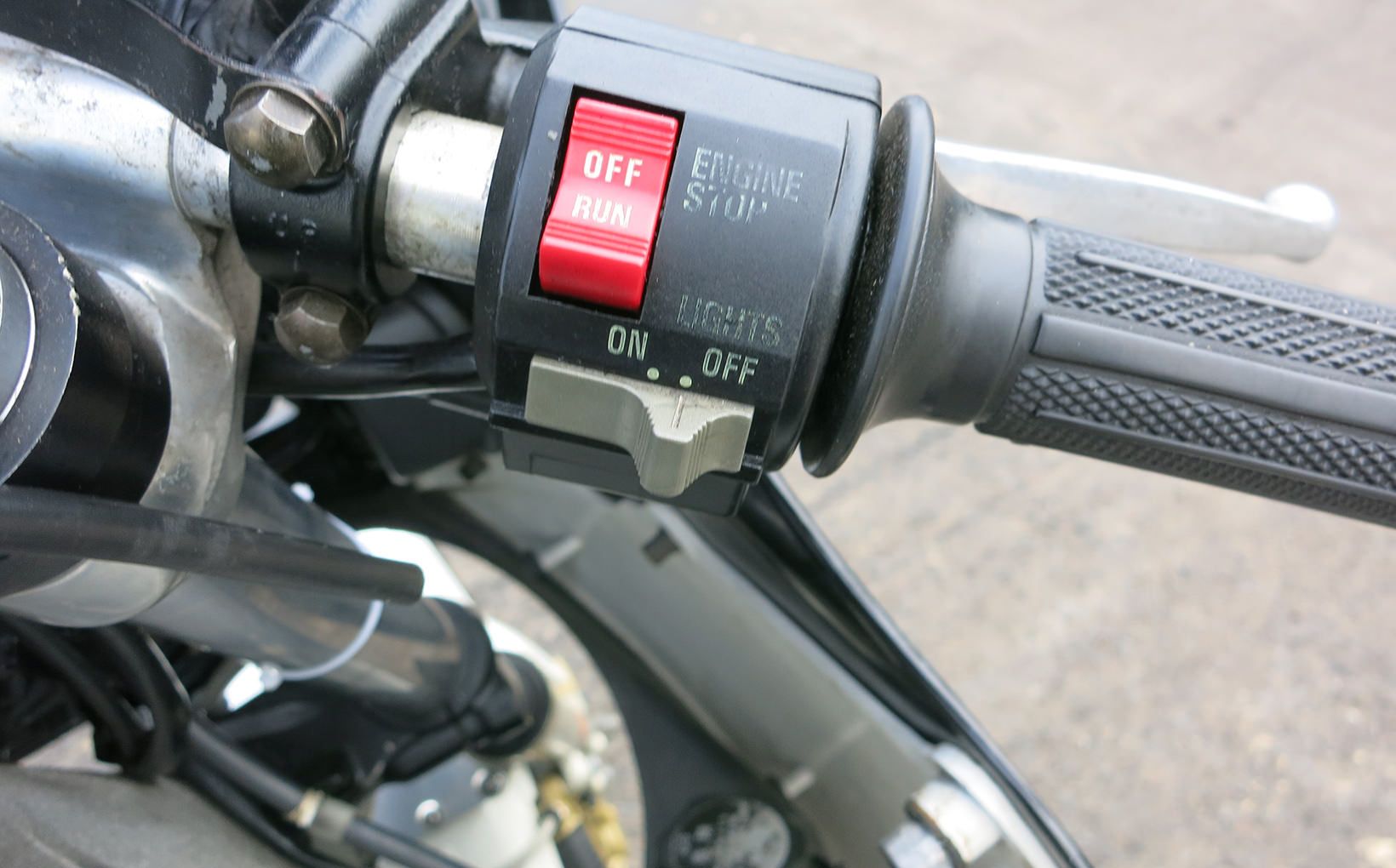 Back when you could switch headlights on and off!

The cassette gearbox is a bit weak with second gear being the culprit – if this fails it can destroy the box and put a hole in the engine cases so make sure the box has been modified with undercut gears. If the engine needs a full rebuild, expect to pay around $6000 for the pleasure. 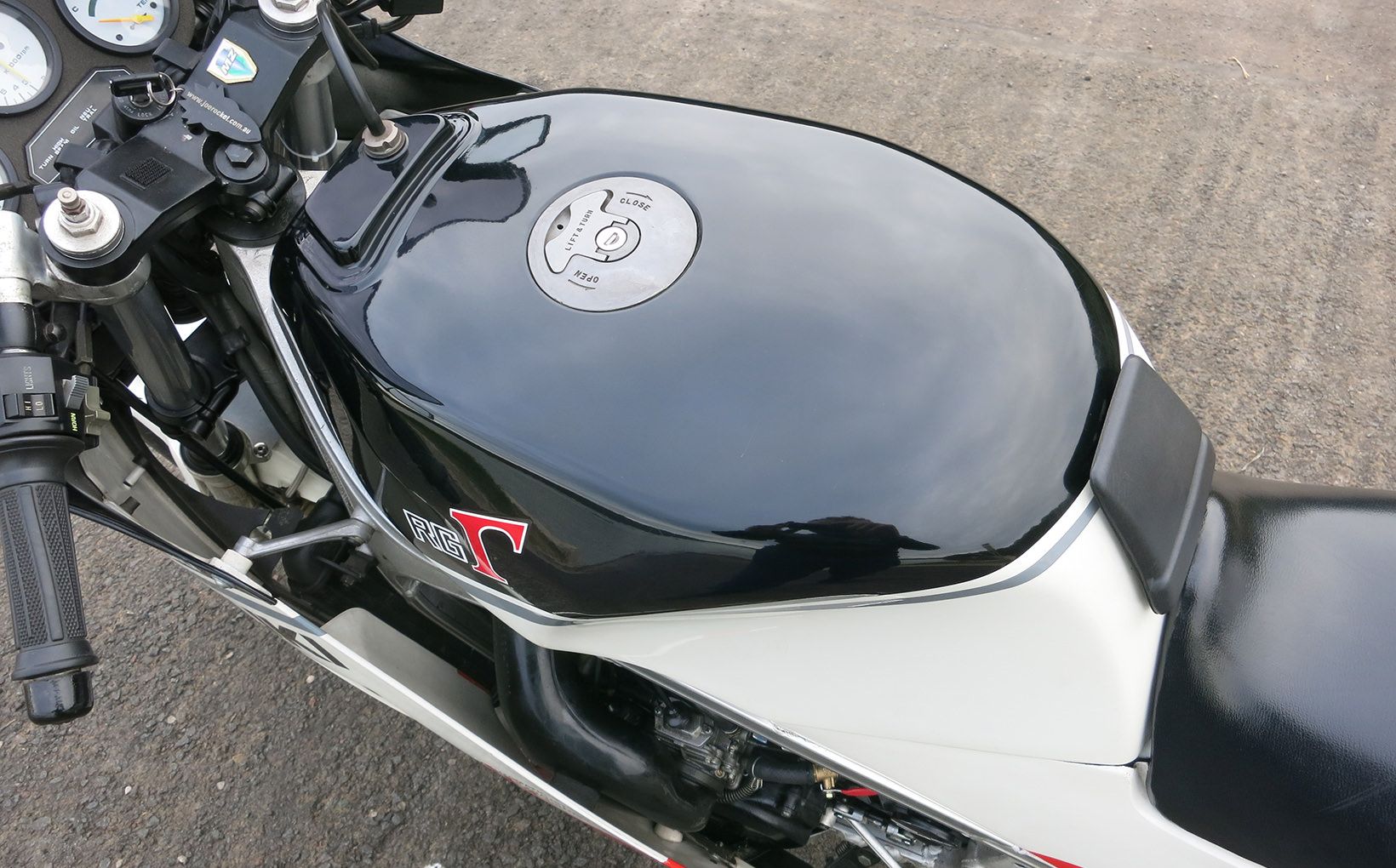 Immaculate original paint. Also, check the MZ badge. My late friend that owned the bike before I did had escaped East Germany… He loved MZ, Google Ernst Degner… See why he though this RG500 was an MZ! 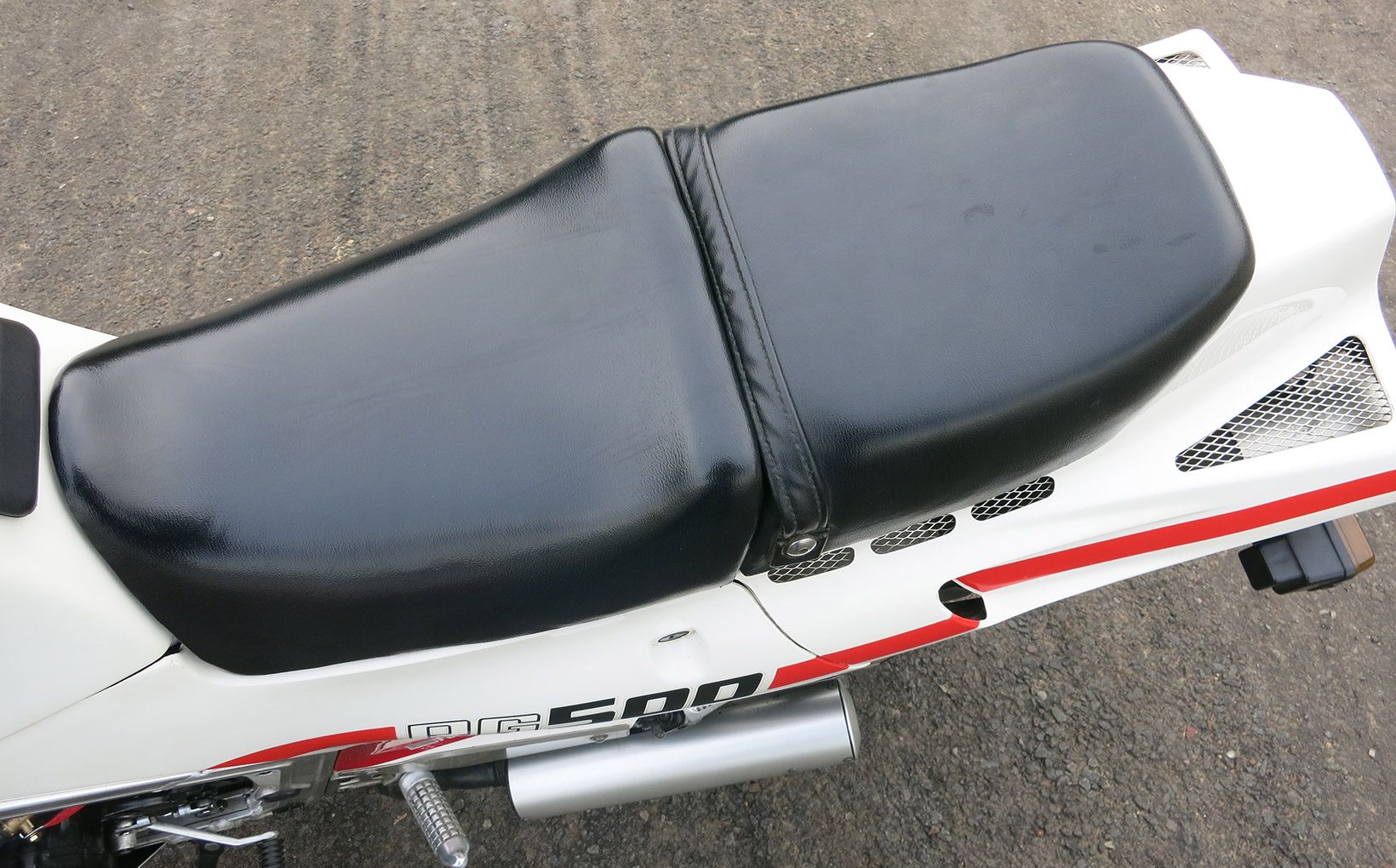 Stock standard seat. There is a single seat race cowl available as well if you can find one…

-The coolest two-stroke there is. 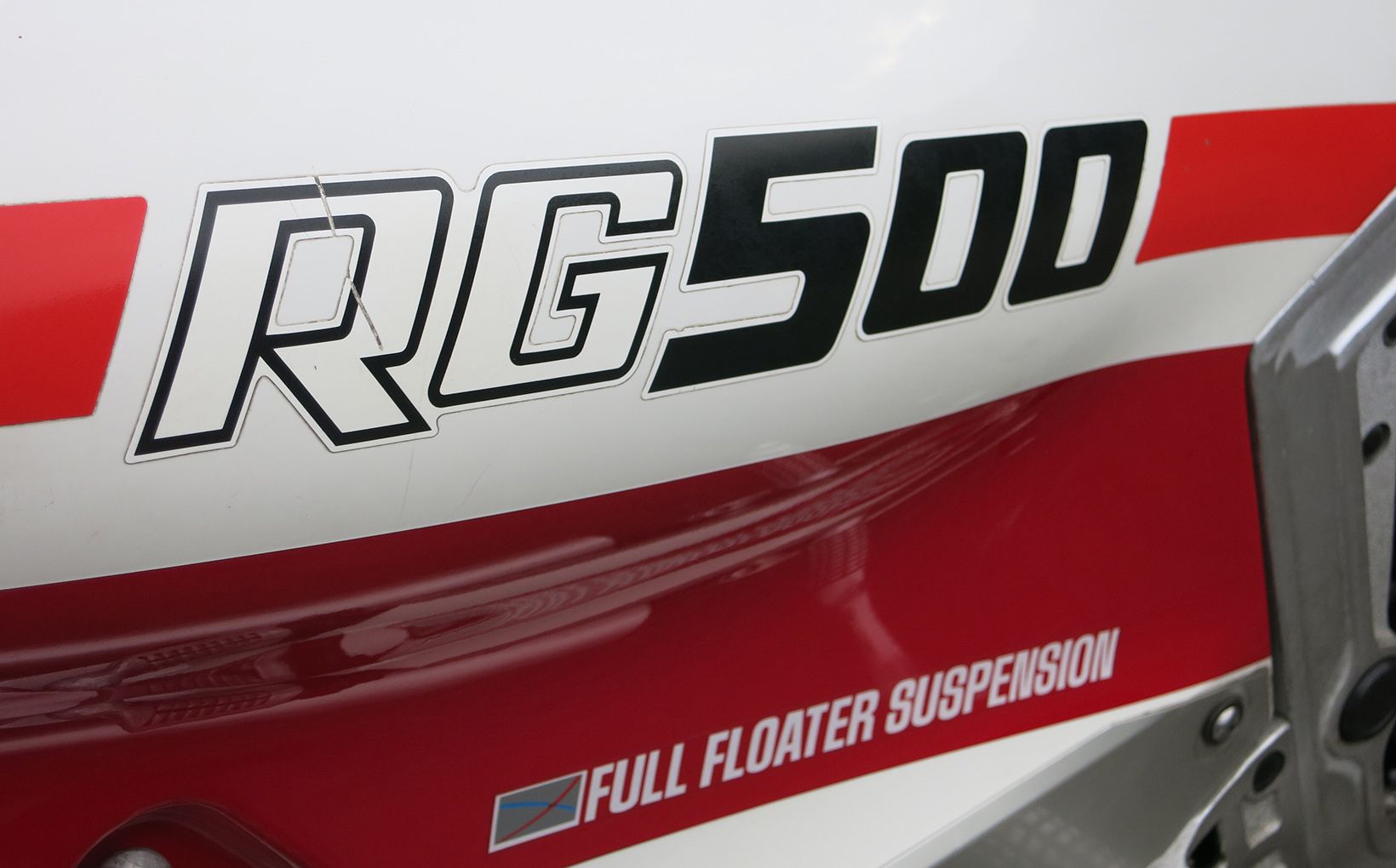 Original plastics, just some usual wear and tear, but overall very tidy for a bike with an amazing 100,000km on the clock! 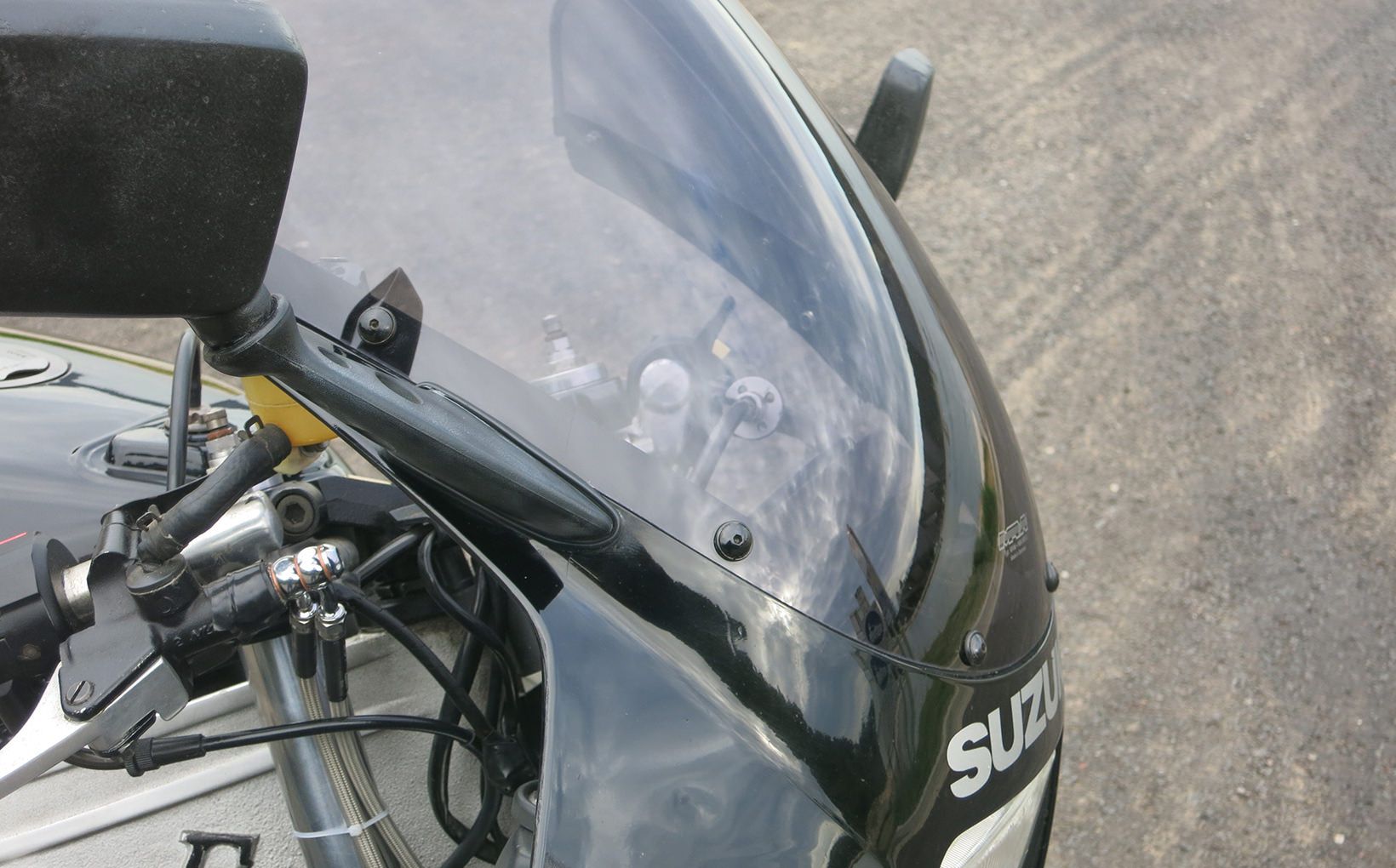 I fitted a tinted MRA screen to the bike, I think it looks better and will protect the dash from UV. 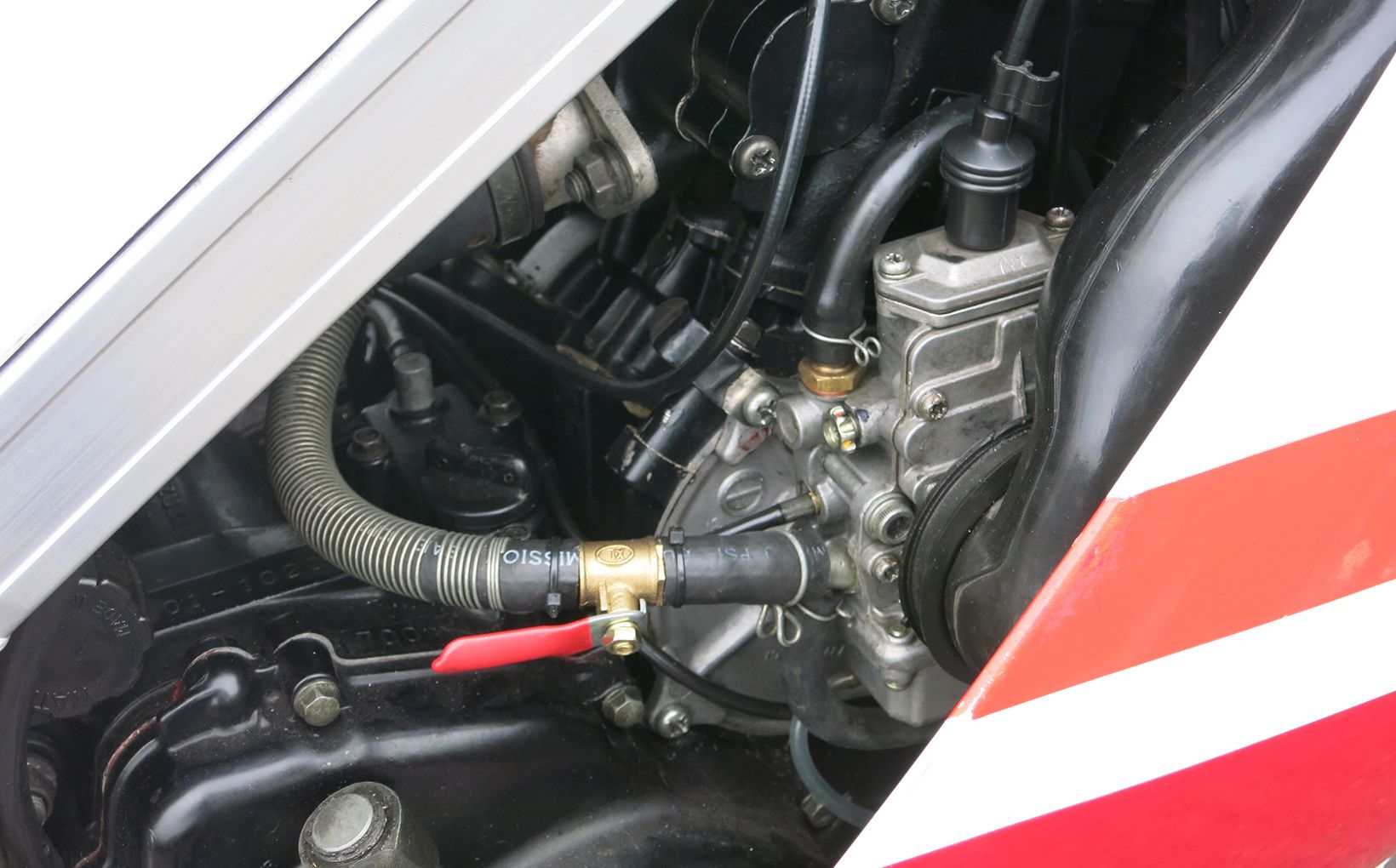 Four flatslide carb’s rebuilt and balanced, and I fitted extra fuel taps – one each side – as the original fuel tap leaks and the engine floods.