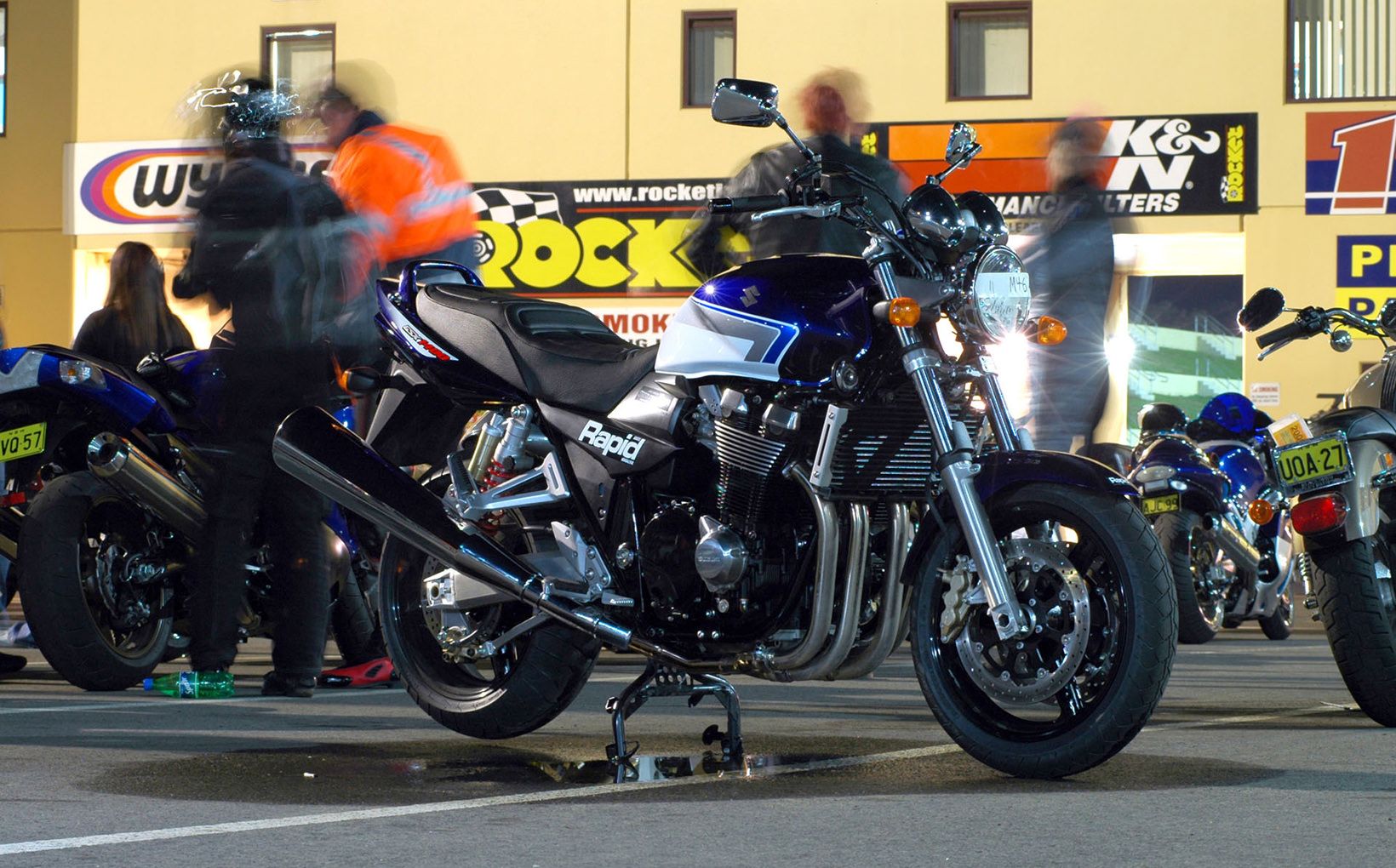 The GSX1400 was designed to be a beefier, torquer and more tourable high-tech version of the legendary Suzuki Bandit. It was initially built to only be sold in Japan and some parts of Europe, however, Suzuki Australia were able to secure the model for us Down Under. Amazingly, despite being seemingly perfect for the market, the 1400 never went to the USA or Canada! 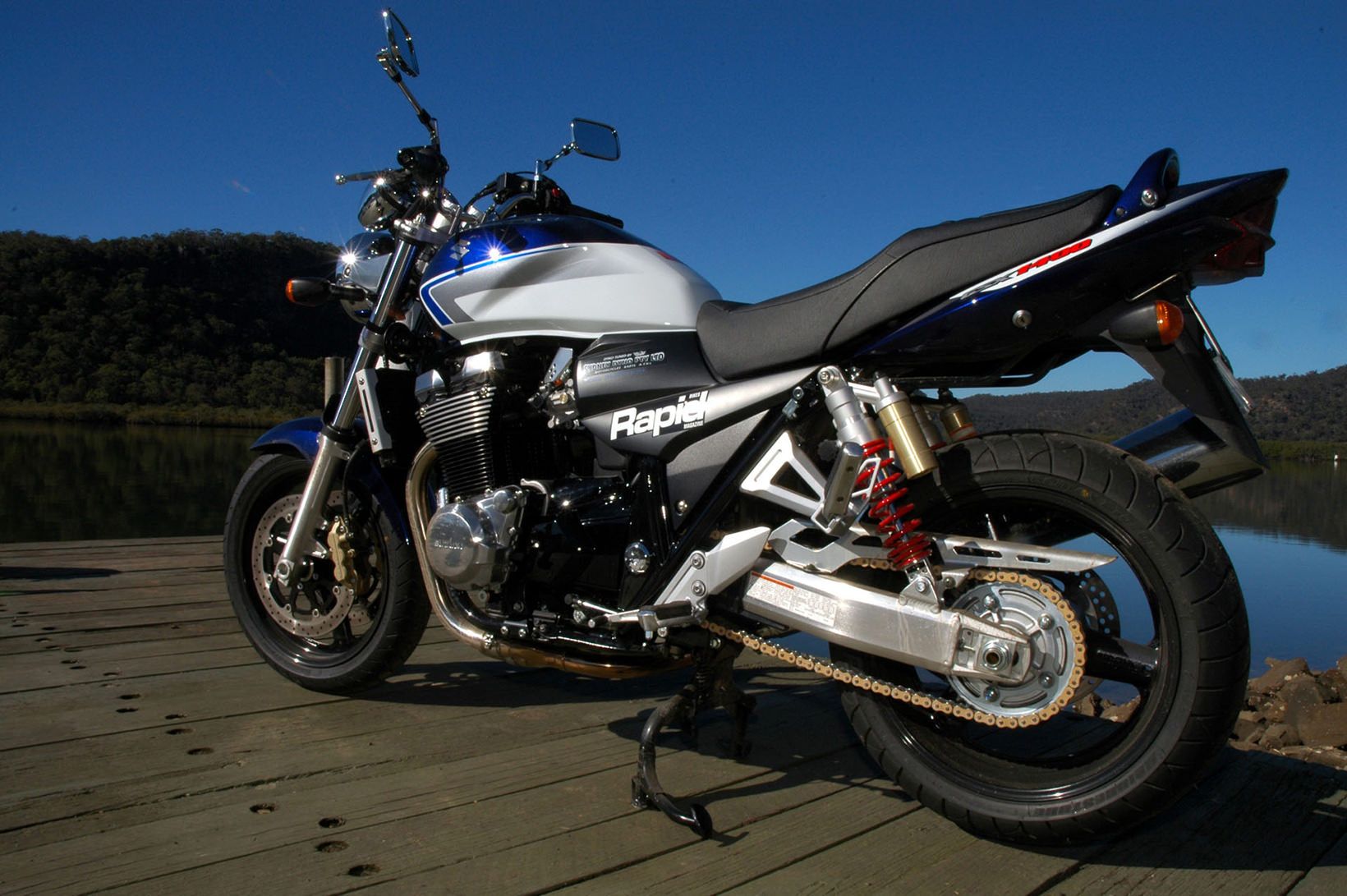 Weighing 228kg, and being tall, long and wide, the GSX1400 is a monster. Still, it is lighter than the XJR Yamaha and more powerful. It also has a cracking top speed of 240km/h. 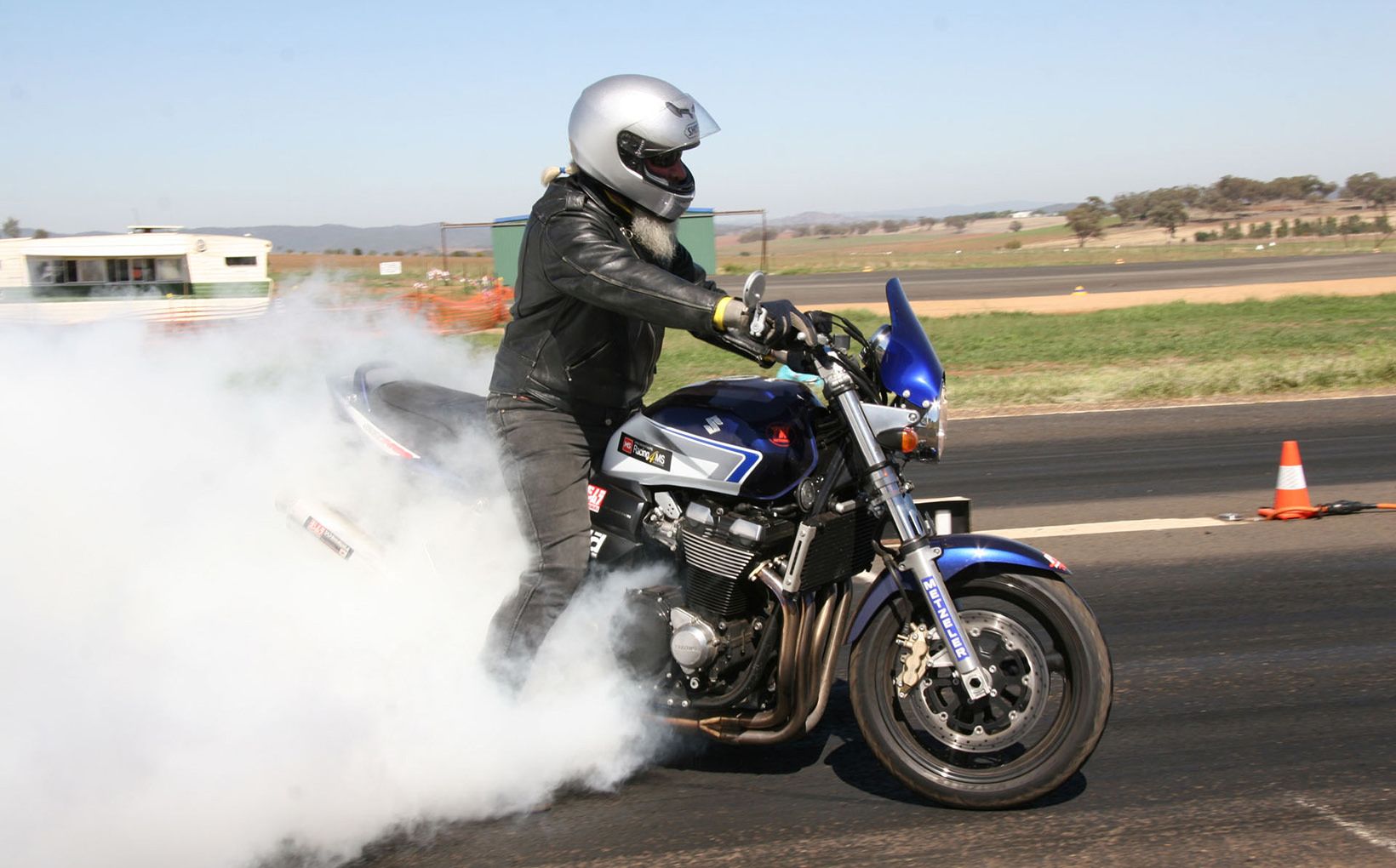 Mick Withers raced Mr Muscle regularly at the drags. It was a 10-second bike.

The GSX is styled on the GS1000 (see our feature here) and has a massive liquid-cooled 1402cc DOHC fuel injected engine. It is an engine that was heavily restricted up top to make way for extra grunt down low but unfortunately it was not able to stay in production due to the onset of Euro3 laws back at the start of 2009. 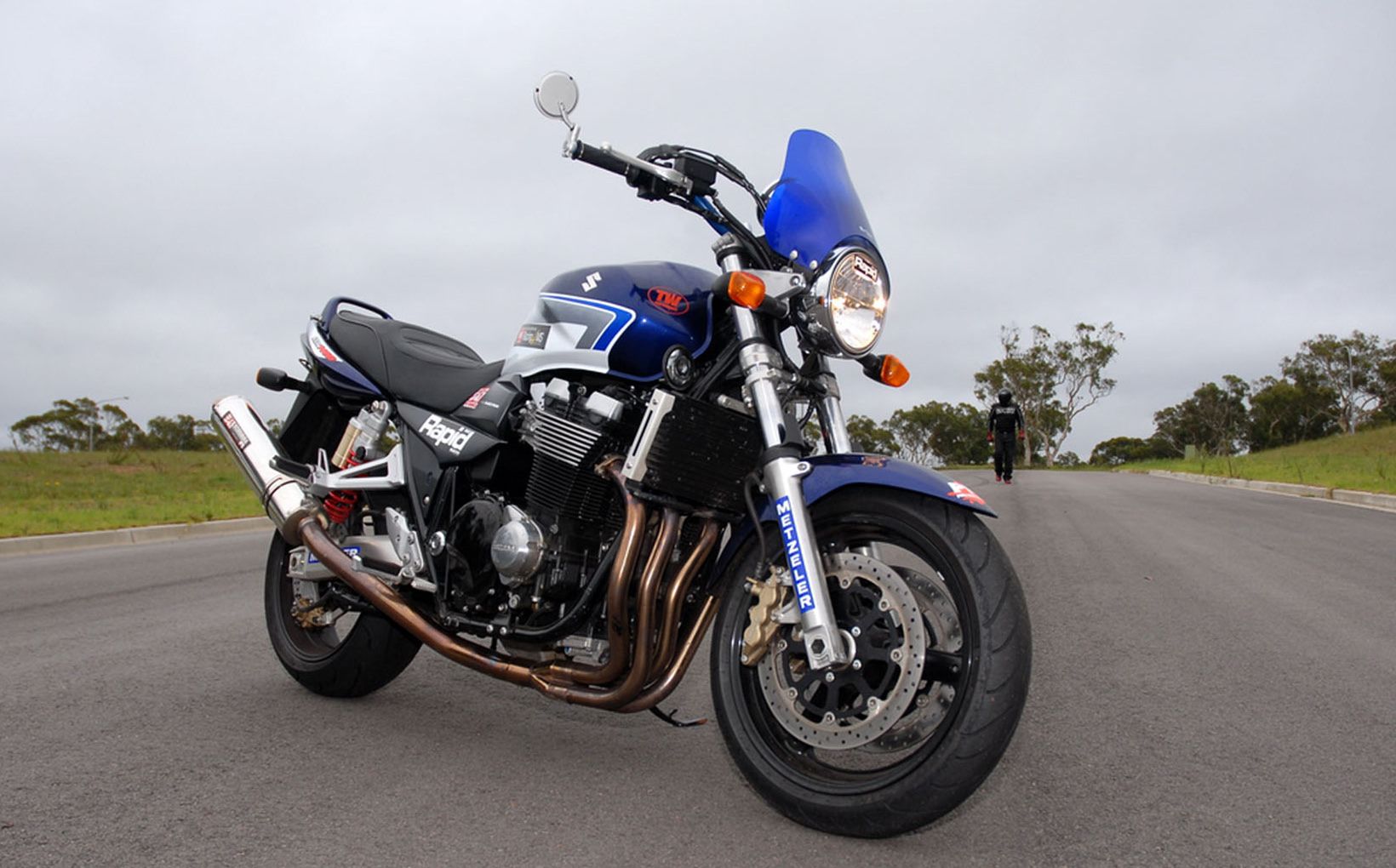 The GSX had a dedicated but niche fan base. With a 22L tank, the biggest seat of any motorcycle I’ve ever seen (like a comfy lounge chair), wide handlebars, huge rubber damped footpegs and wishy-washy soft suspension, the GSX14 was the ultimate two-up tourer for the nakedbike fan. 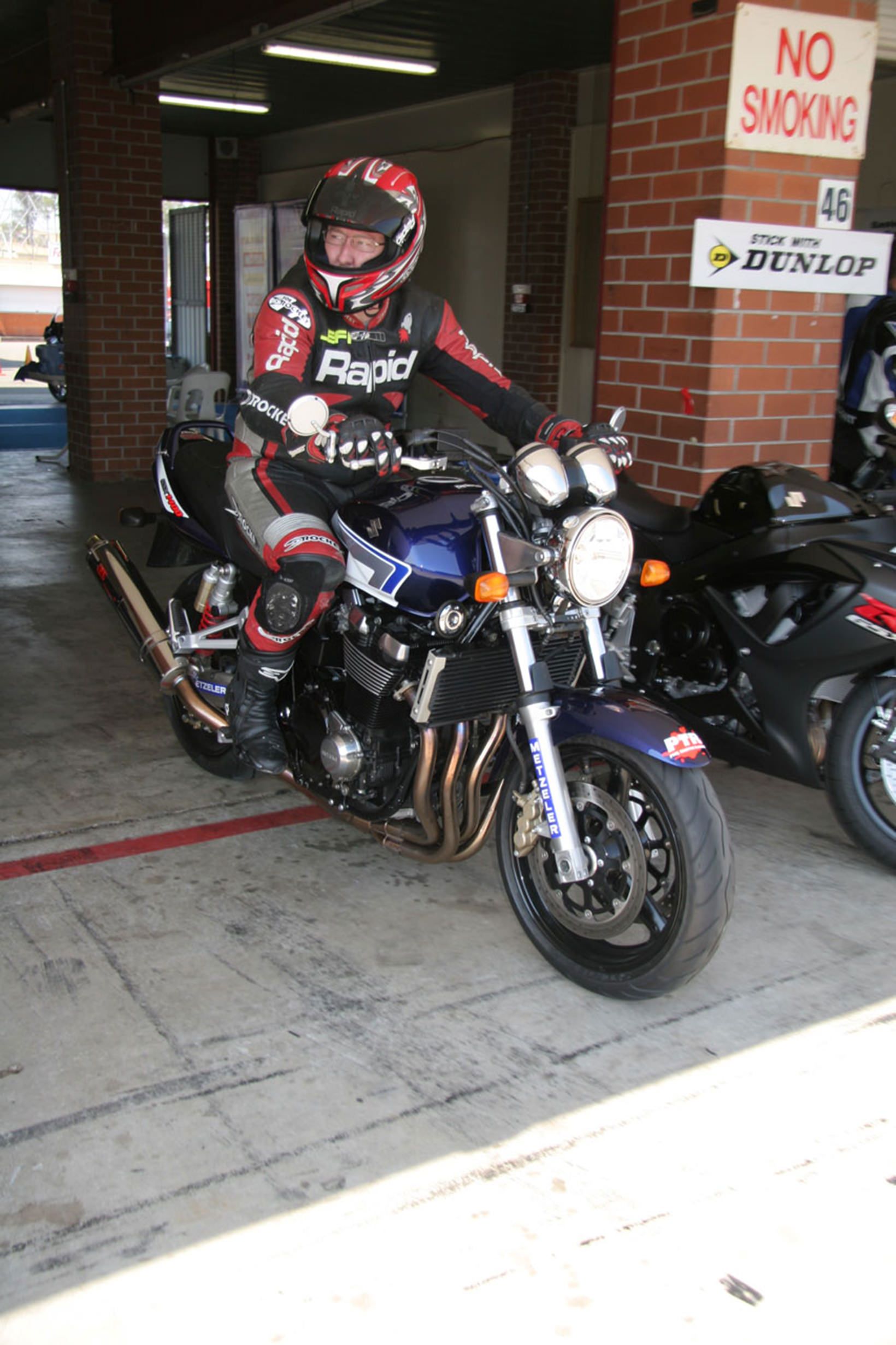 Watch out if you see this big beast coming through! Mr Muscle certainly was imposing. 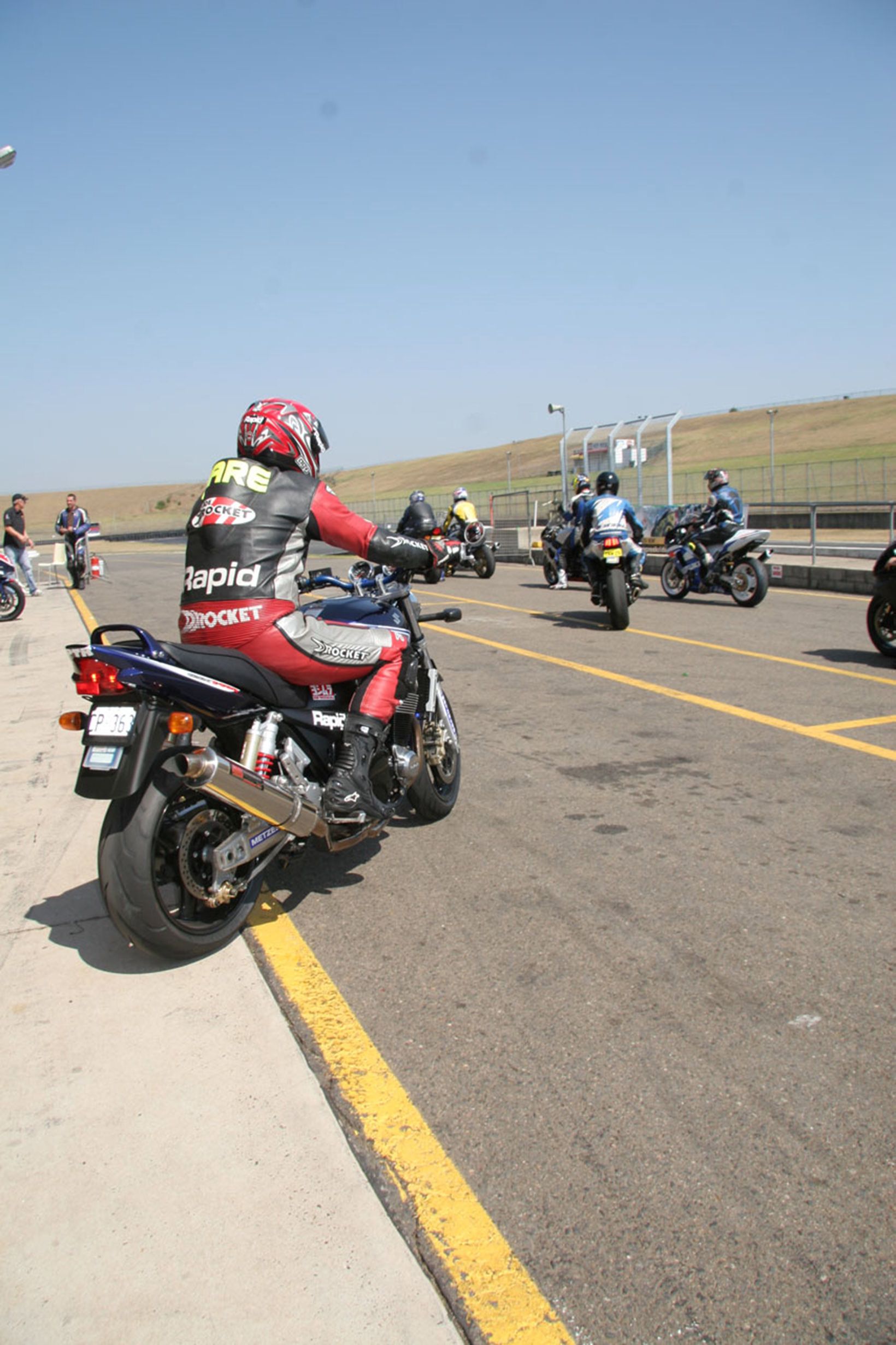 Ready to fry some rear tyre. This was way before traction control!

For those with more of a performance thirst, a lot could be done to the GSX as it could happily be turbocharged, have NOS fitted or be liberated via porting work and cams. There was a lot to be gained from the cylinder-head alone… 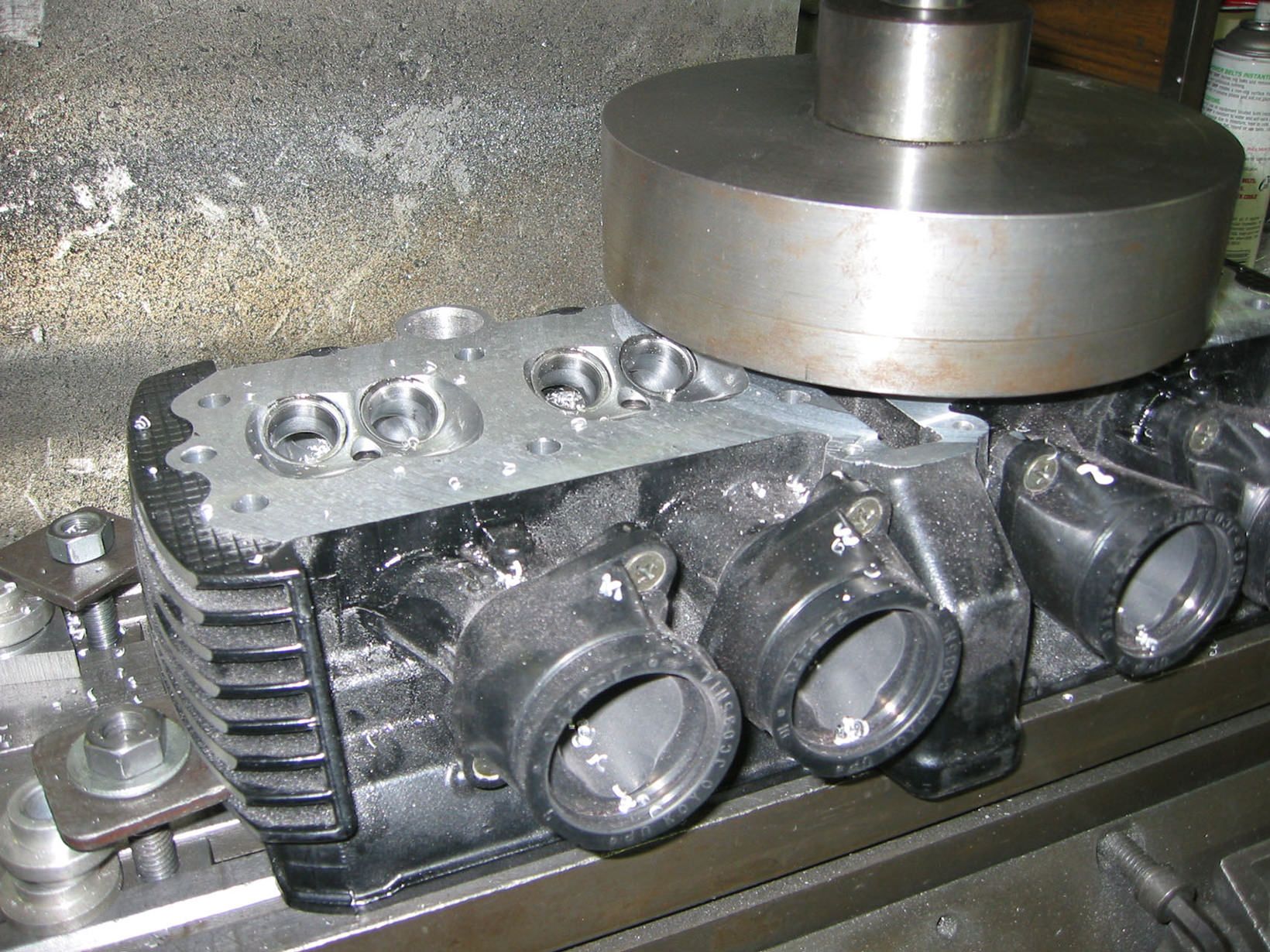 Machining down the cylinder-head surface for more compression. 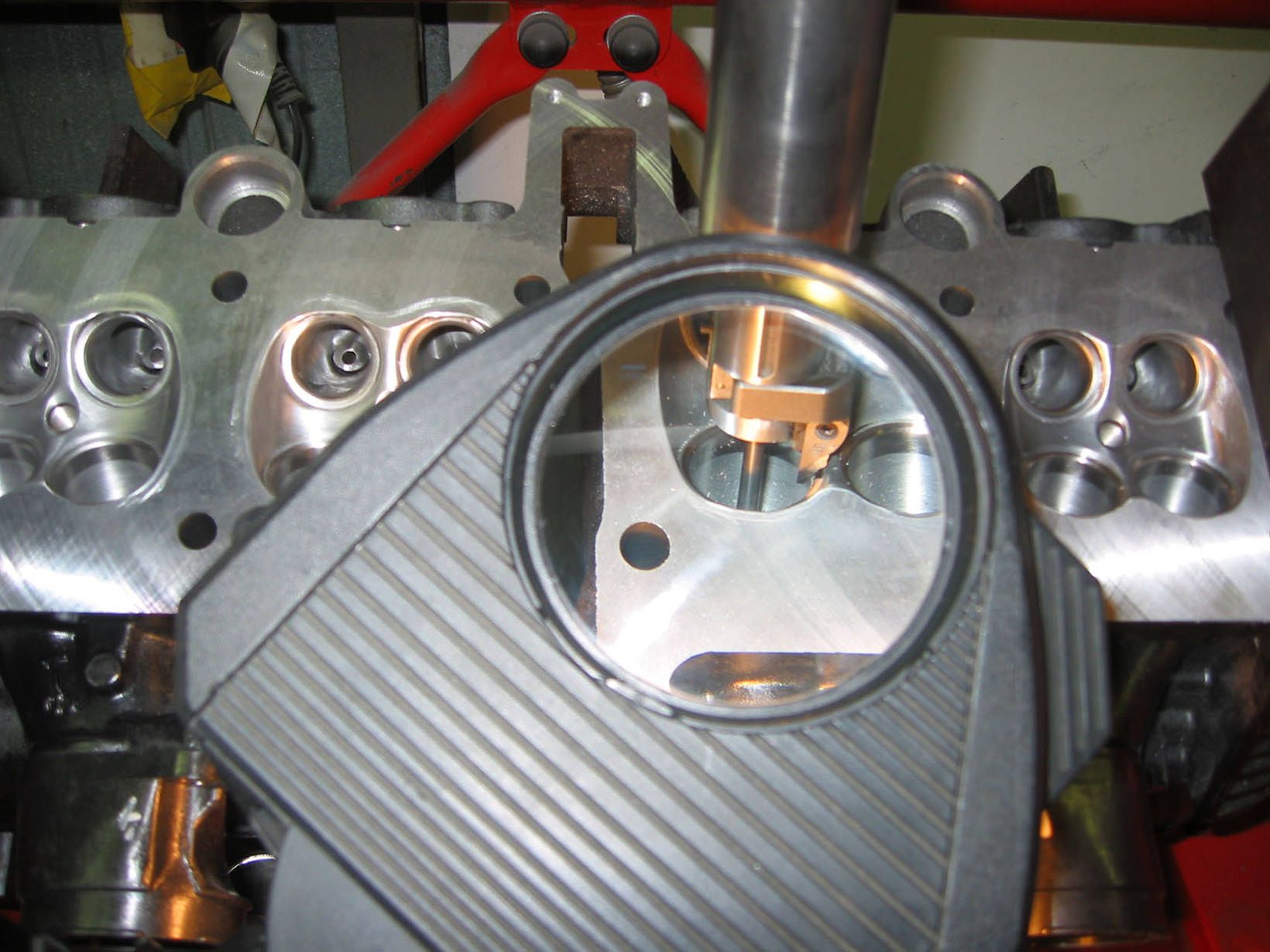 THE RIDE – by Deeno

Plush is the best description for the big naked Suzi. The seat is ridiculously soft, riding position is very conservative mainly thanks to handlebars that would probably more at home on your sister’s dragster pushbike and very soft suspension that gets vague at best when the pace is upped on our more than average roads. 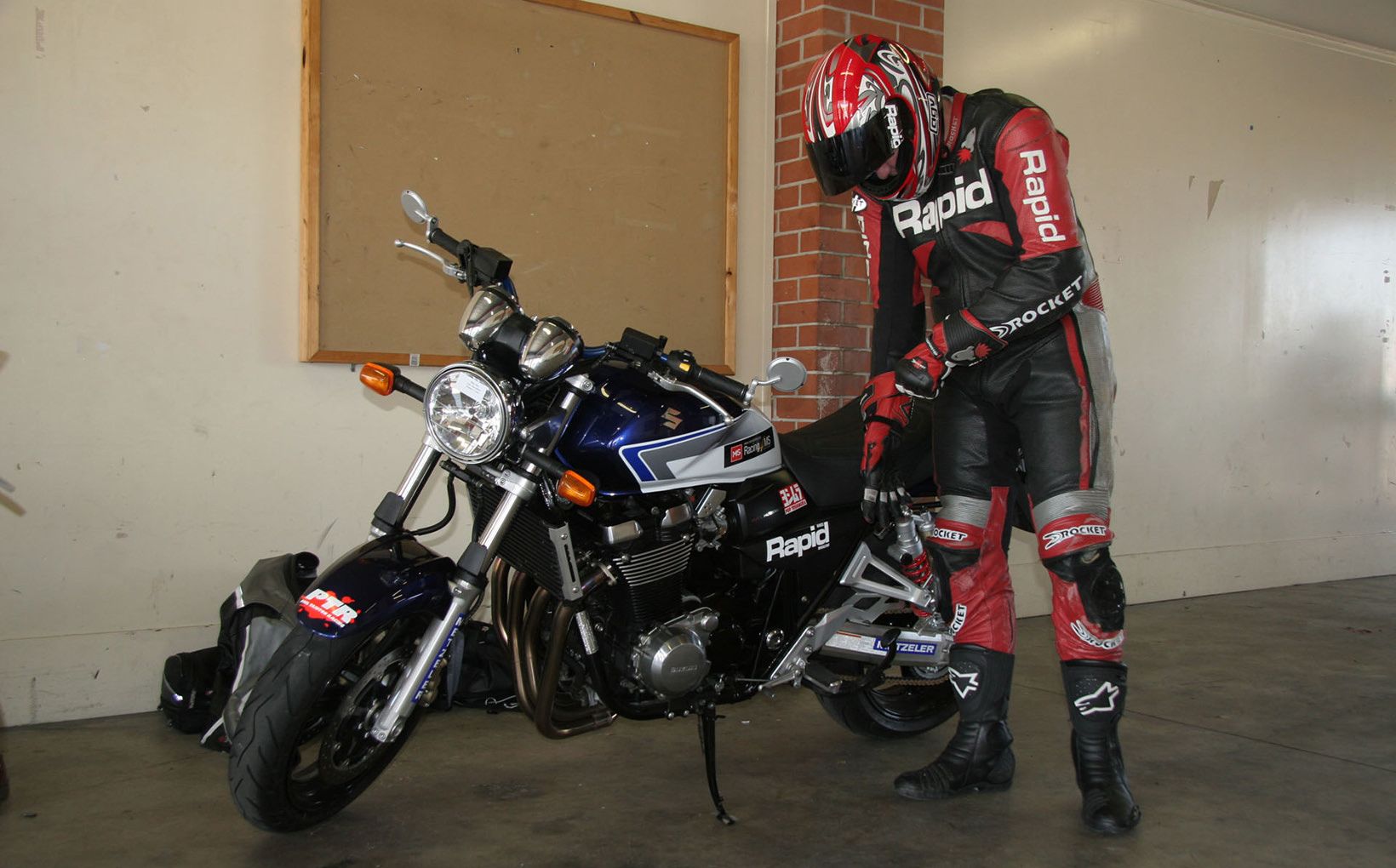 Heading out for some laps on the 1400 at Eastern Creek. It was a fun bike on track for a big lump!

On the upside, the suspension is equipped with spring preload that is simple as turning a very accessible knob at the rear, compression and rebound adjustment at both ends coupled with Tokicos proven six pot calipers gripping dual 320mm rotors offering plenty of feel and power that require only two fingers to pull things up with confidence. 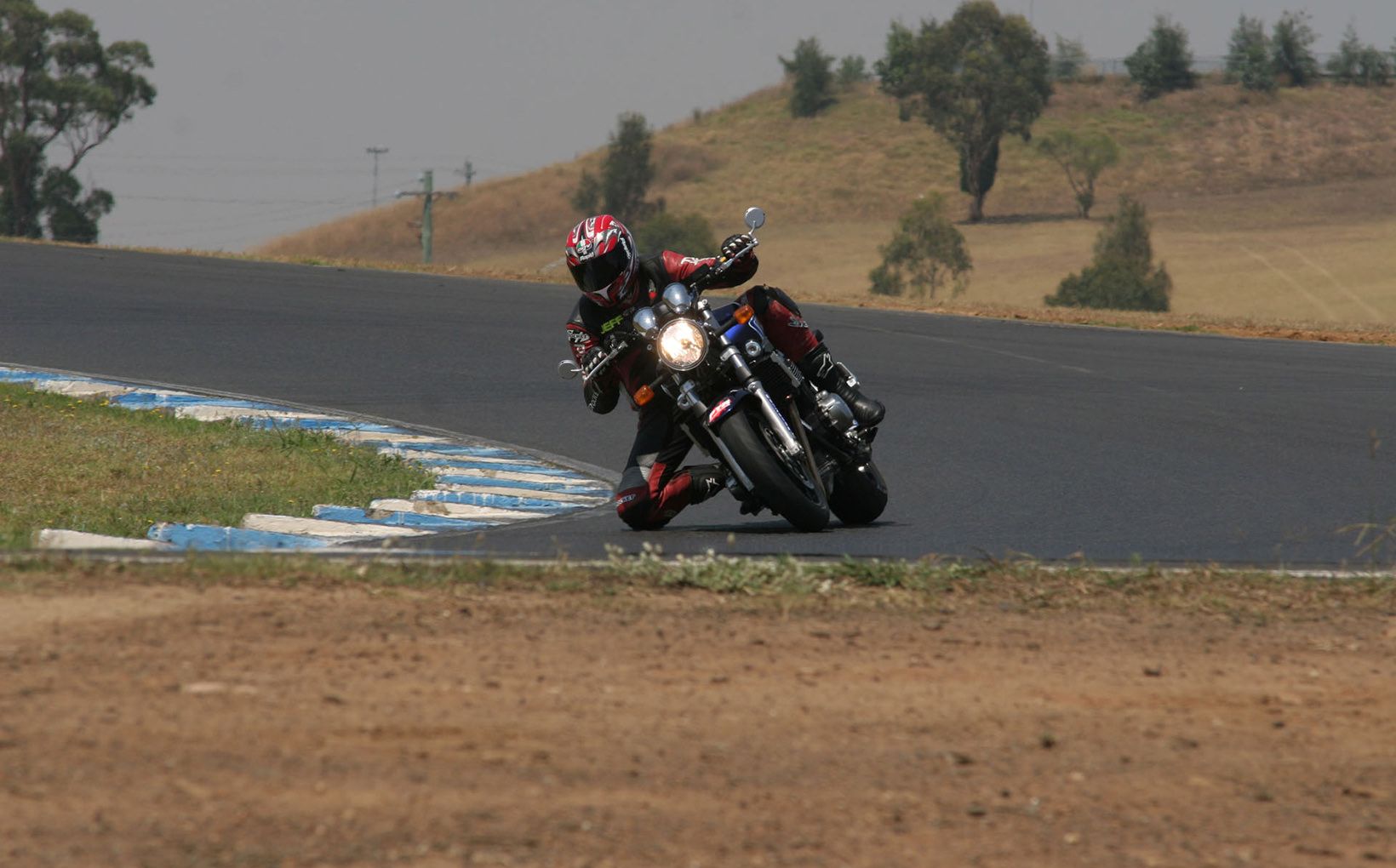 With the cylinder-head work, our bike had monster top-end so was great at the track.

The donk is so user friendly it’s not funny. There is so much low down and mid-range grunt the 1400 pulls cleanly from as low down 40km/h in top gear without a hint of transmission snatch. The trade-off being, it really struggles to make the 9000rpm redline. On the drag strip it was still only 8/10nths slower than my best time on the latest thousand cc sports bikes. 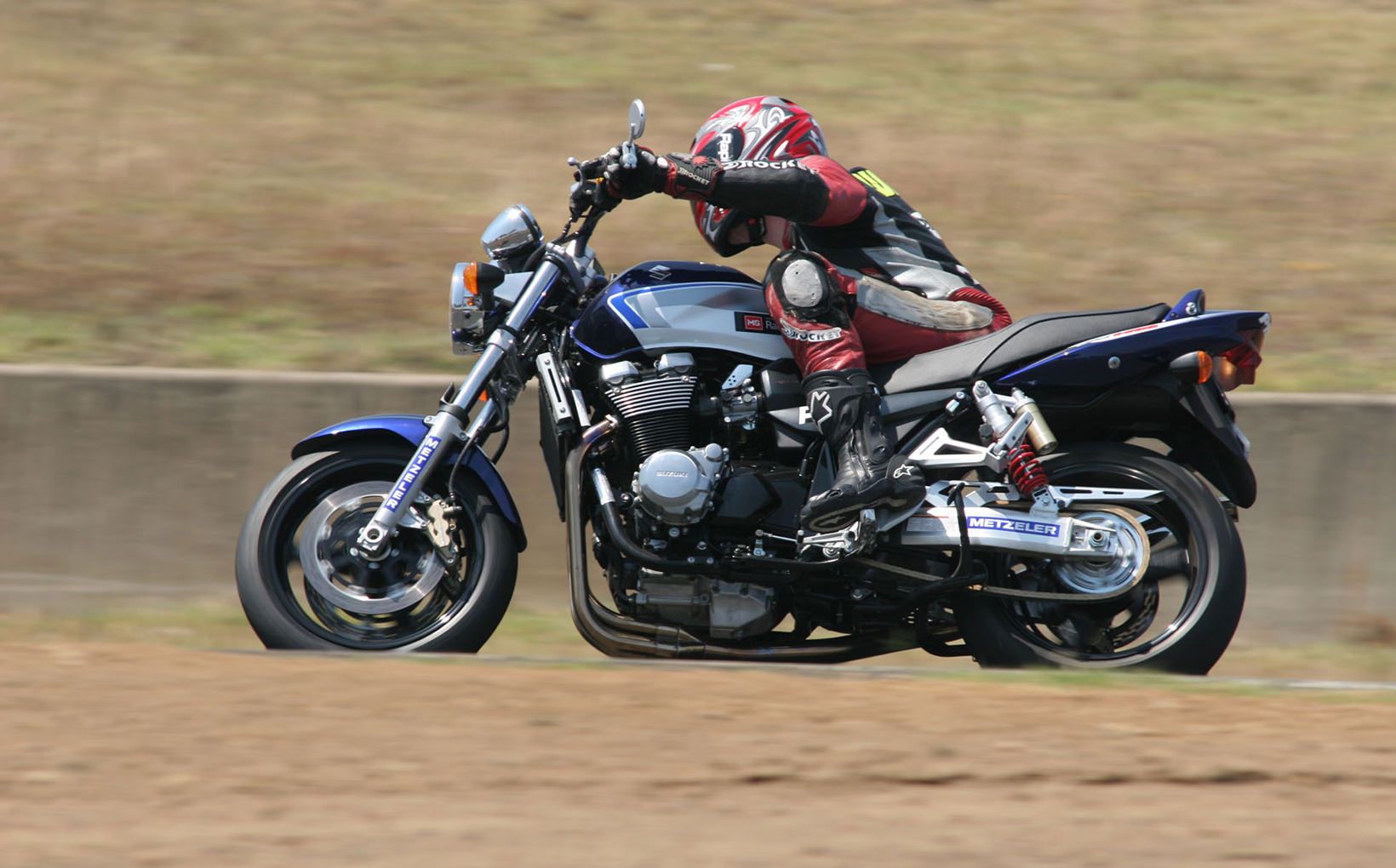 Stock engines make peak torque at 5000rpm so do not like to rev. Great on the road though.

The GSX certainly is not the barge I expected it to be. Even though the bike carries its weight quite high compared more modern equipment, the GSX tackles the twisties effortlessly with the footpegs touching down long before the limits of the bikes capabilities and the standard Bridgstone Battle Axes cry enough. 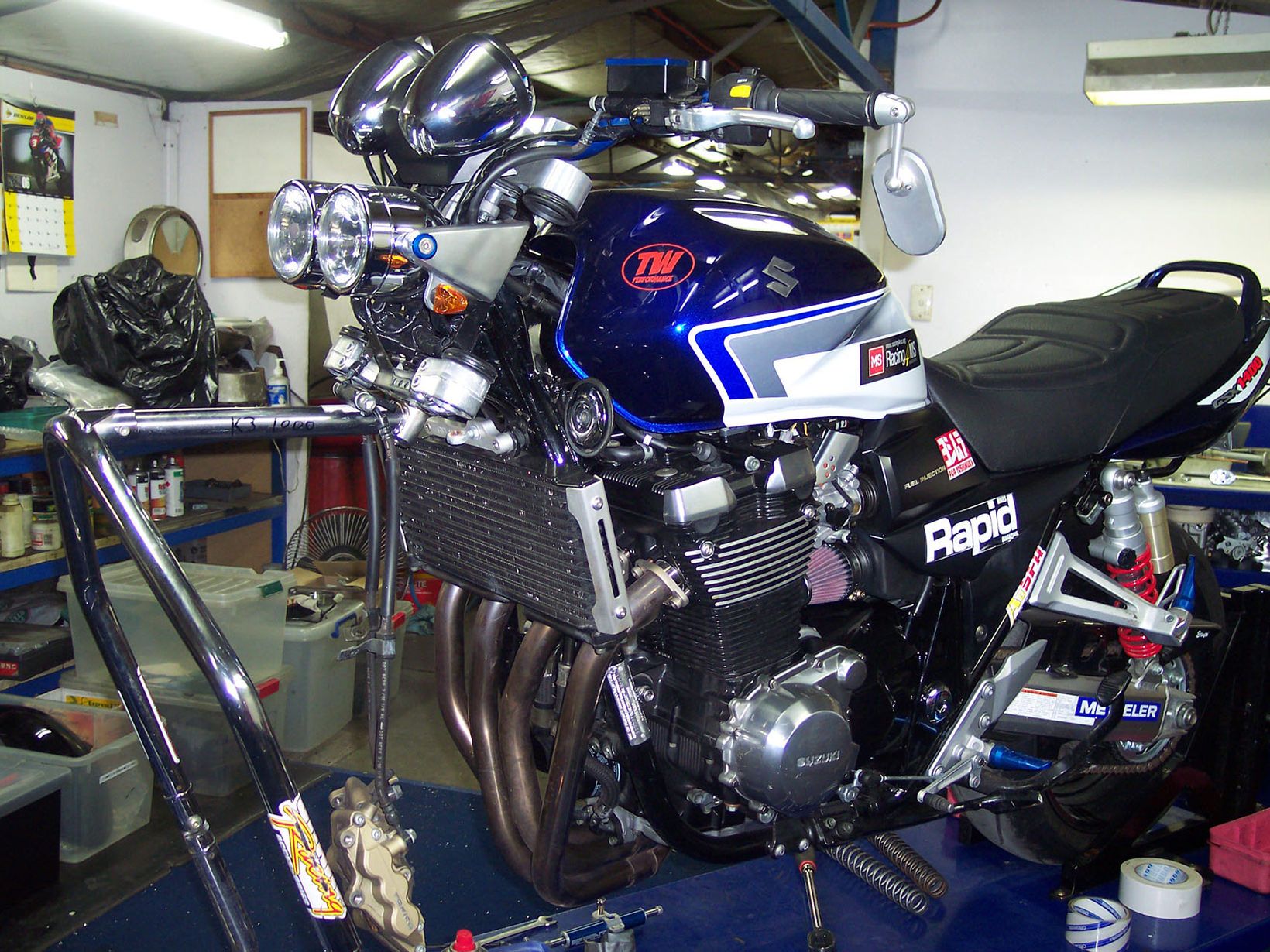 At PTR getting chassis work. I believe Phil Tainton still owns the bike!

With Suzuki Australia and my magazine at the time, Rapid, I built a weapon GSX1400 we called Mr Muscle, in 2006. It had 60 per cent more power and torque than standard, a 1620cc big bore kit, Yoshimura camshafts and exhaust system, PTR ported and flowed cylinder-head, pod airfilters, a Power Commander, PTR airbox, upped compression and lots more. It would power wheelie in the first three gears! 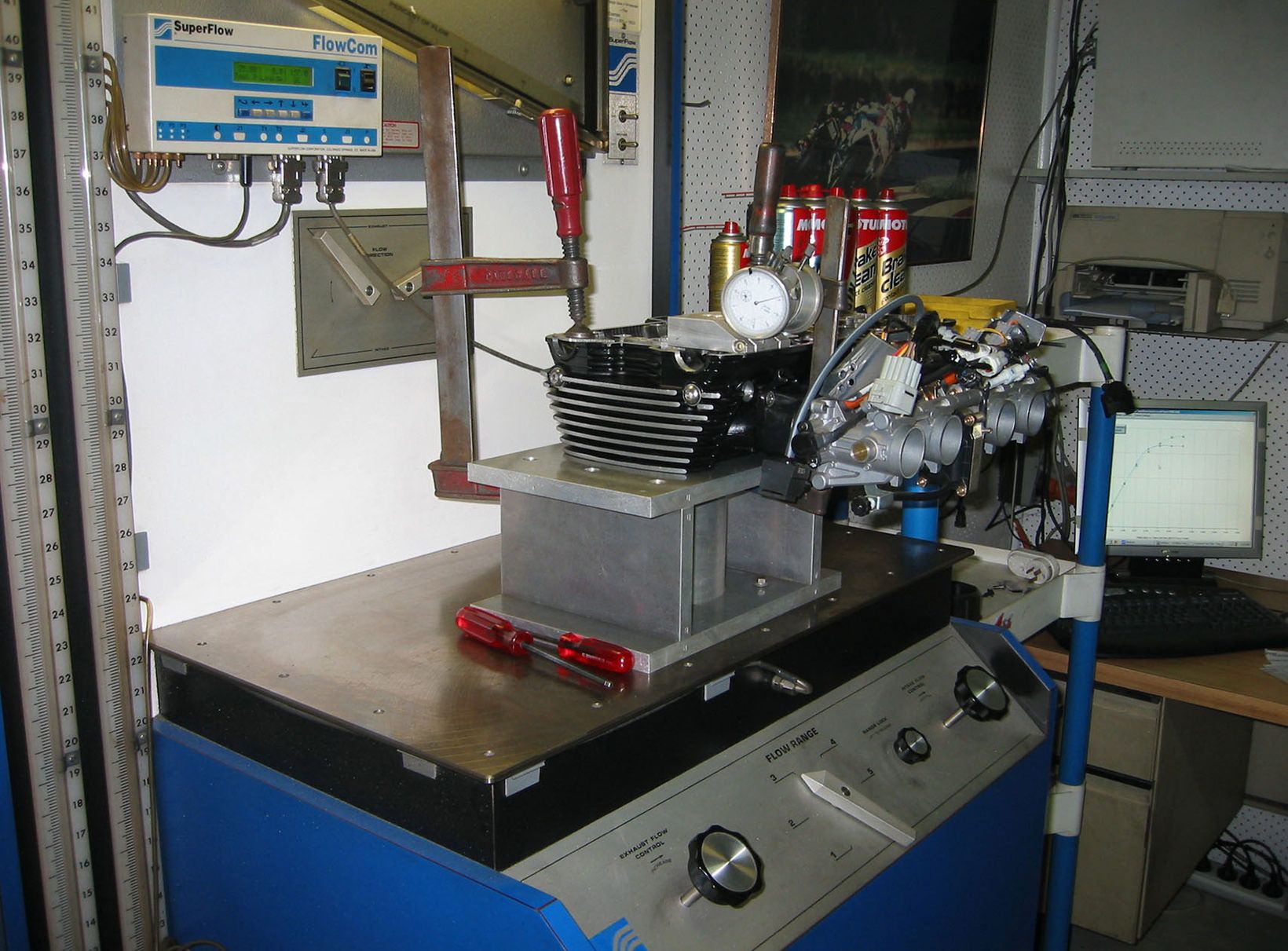 Flow testing. The next step would have been larger throttle-bodies if we kept chasing power.

The chassis was equally upgraded with PTR tuned suspension at both ends, Metzeler tyres, a steering damper, braking upgrades and it had lots of bling on it! 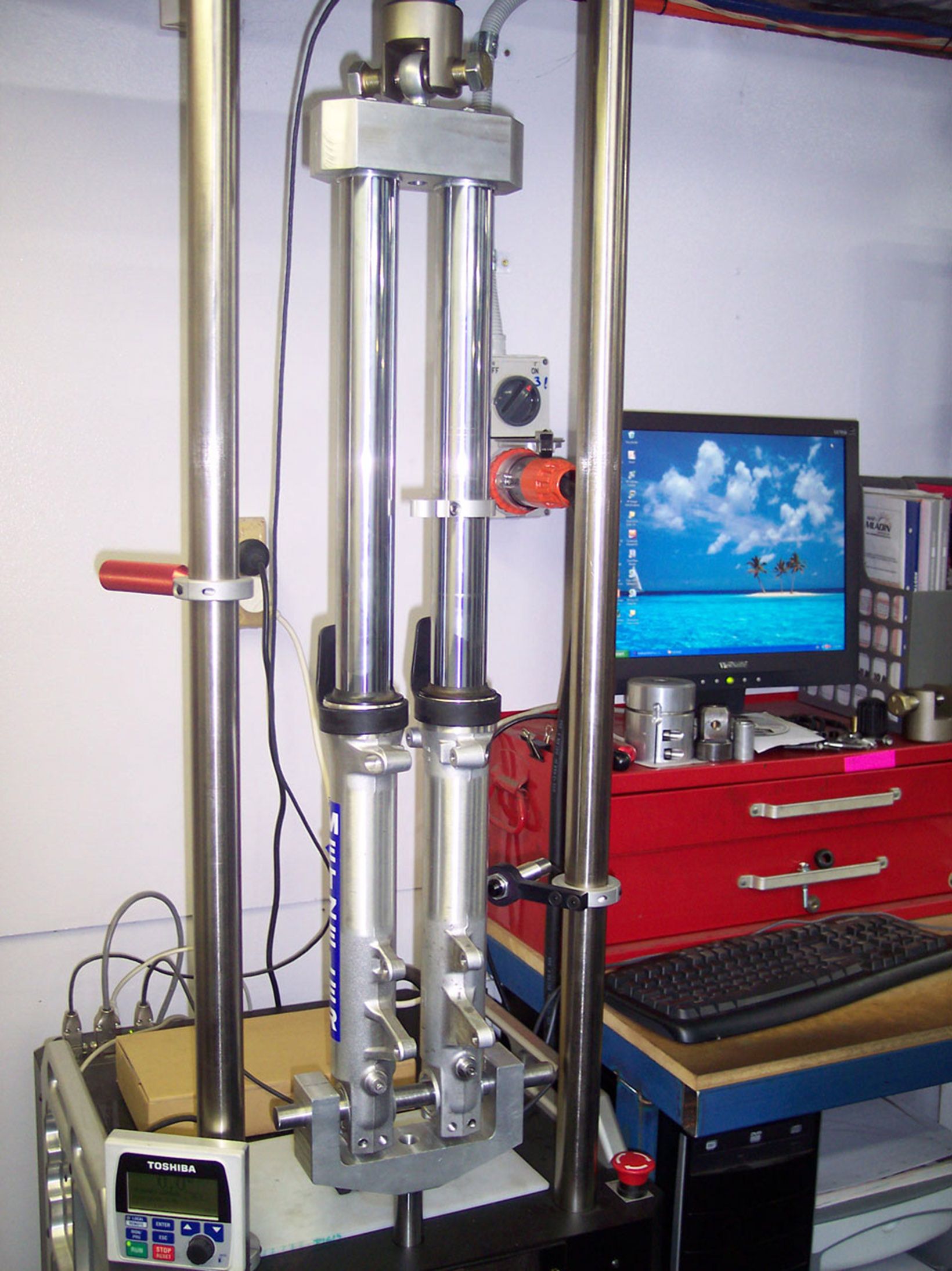 On the PTR shock dyno having the forks set-up.

The bike was a beast, even on track days it could be thrown around pretty-well, and it still lives on in Melbourne I’m told. 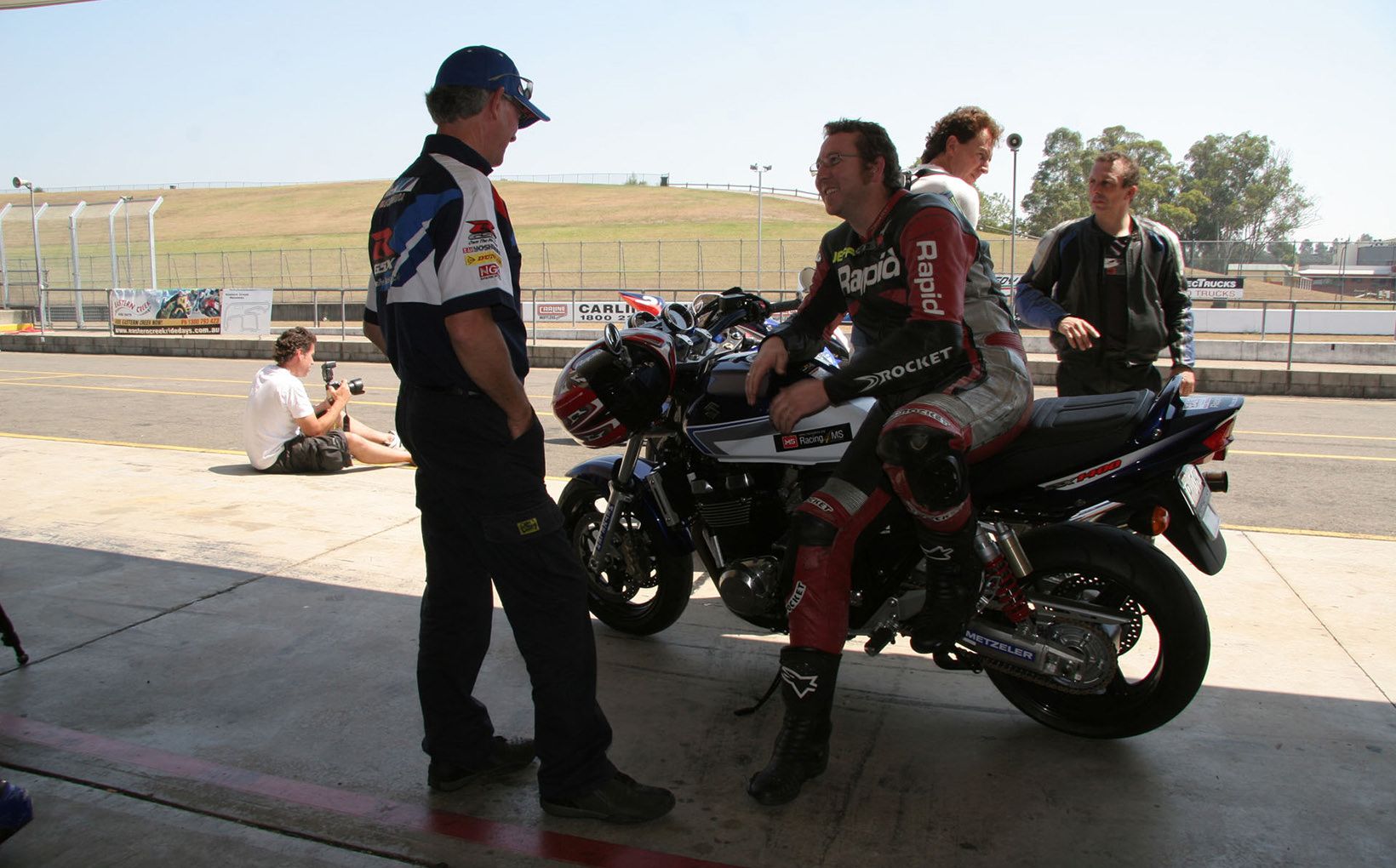 Chatting to the legend Phil Tainton.