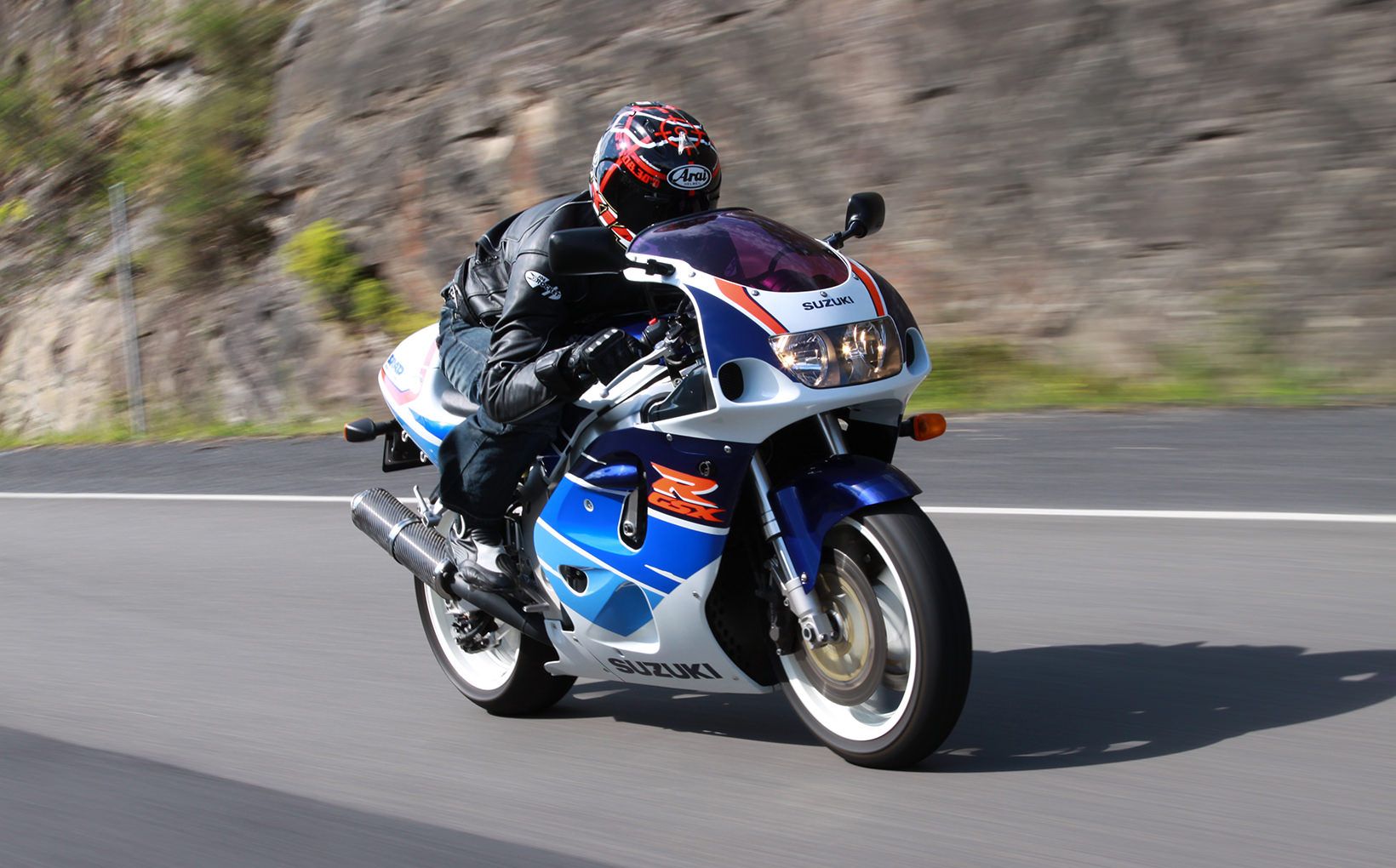 On every other day that I’m not writing, shooting or setting budgets, I’m submerged in my other life as an editor and test rider of the newest, most powerful and best handling bikes on the planet. I’ve been privvy to world launches at exotic tracks for just about every single bike that has been built in the past decade. And I’ve raced many great machines. But in all that time, very few machines have really, truly touched my motorcycling soul. Wind the clock back 25-years, however, to this stunning motorcycle, and there was plenty of touching going on. Ahem… 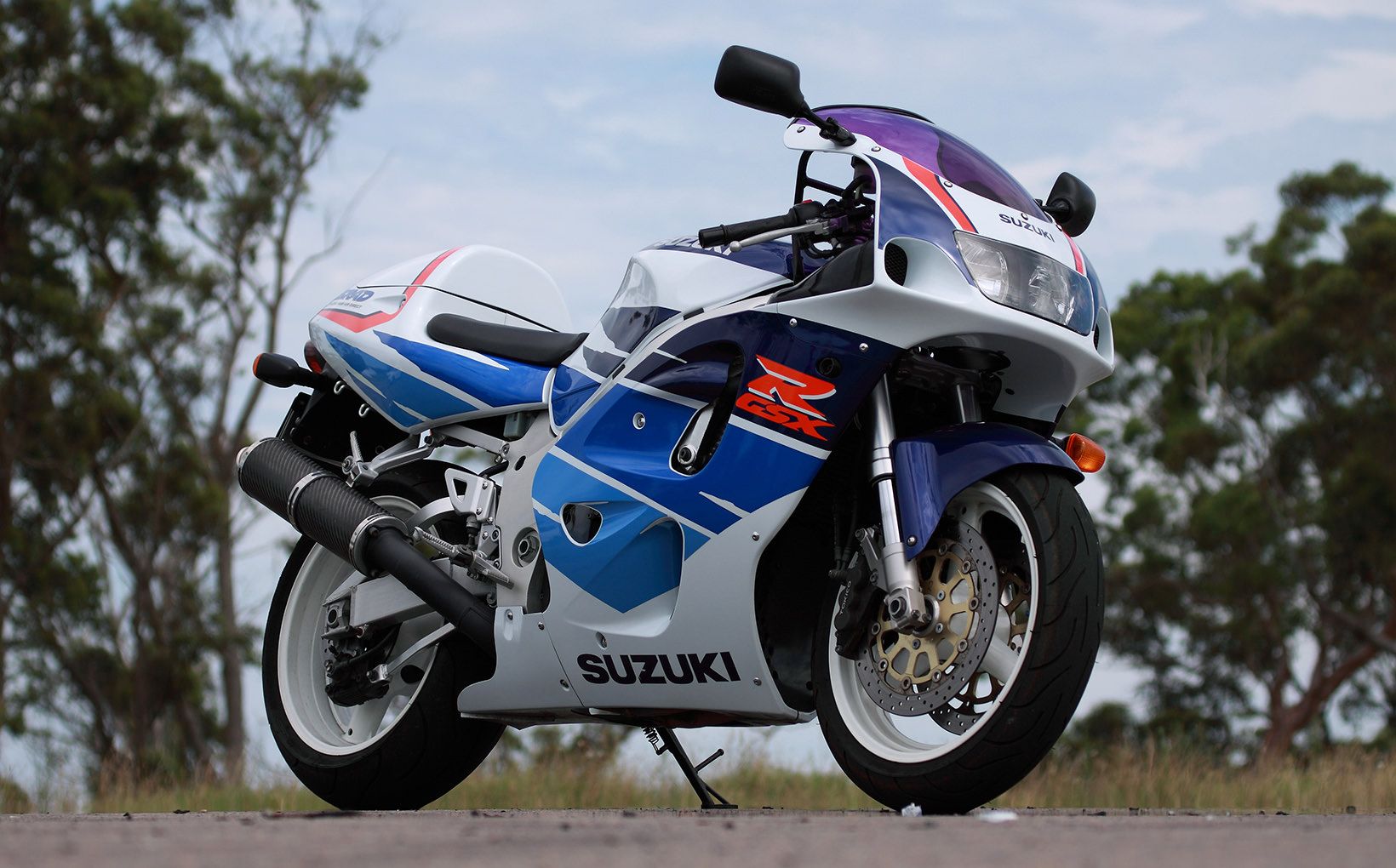 In 1996 I was a budding Supersport racer and competing in the Australian Road Racing Championships. I was also a mechanic at a Kawasaki dealership and spent half of my life working on the brilliant ZX-7R. A bike that was more than a match for the Fireblade and FZR1000 in the chassis department but no match in straight-line speed. 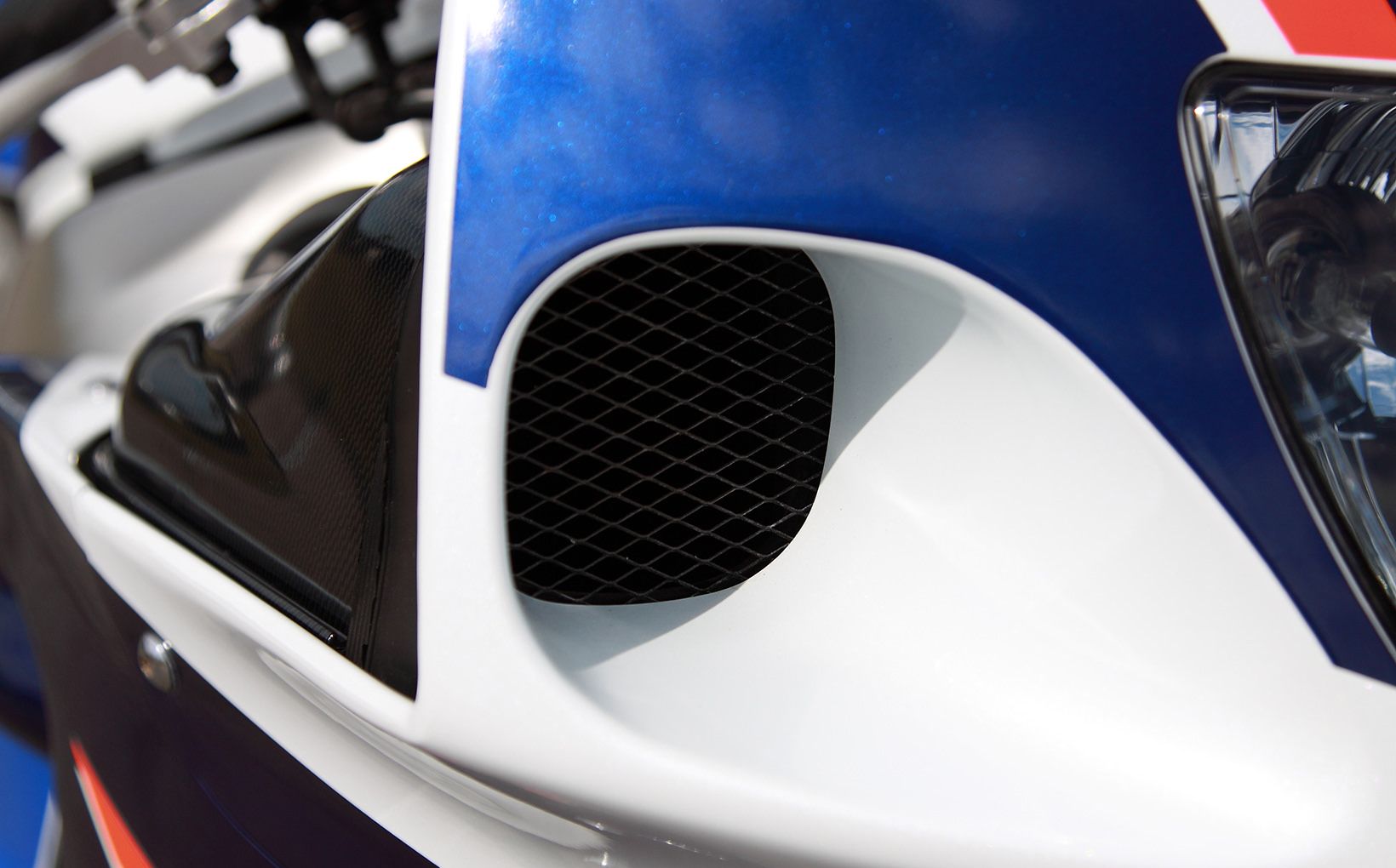 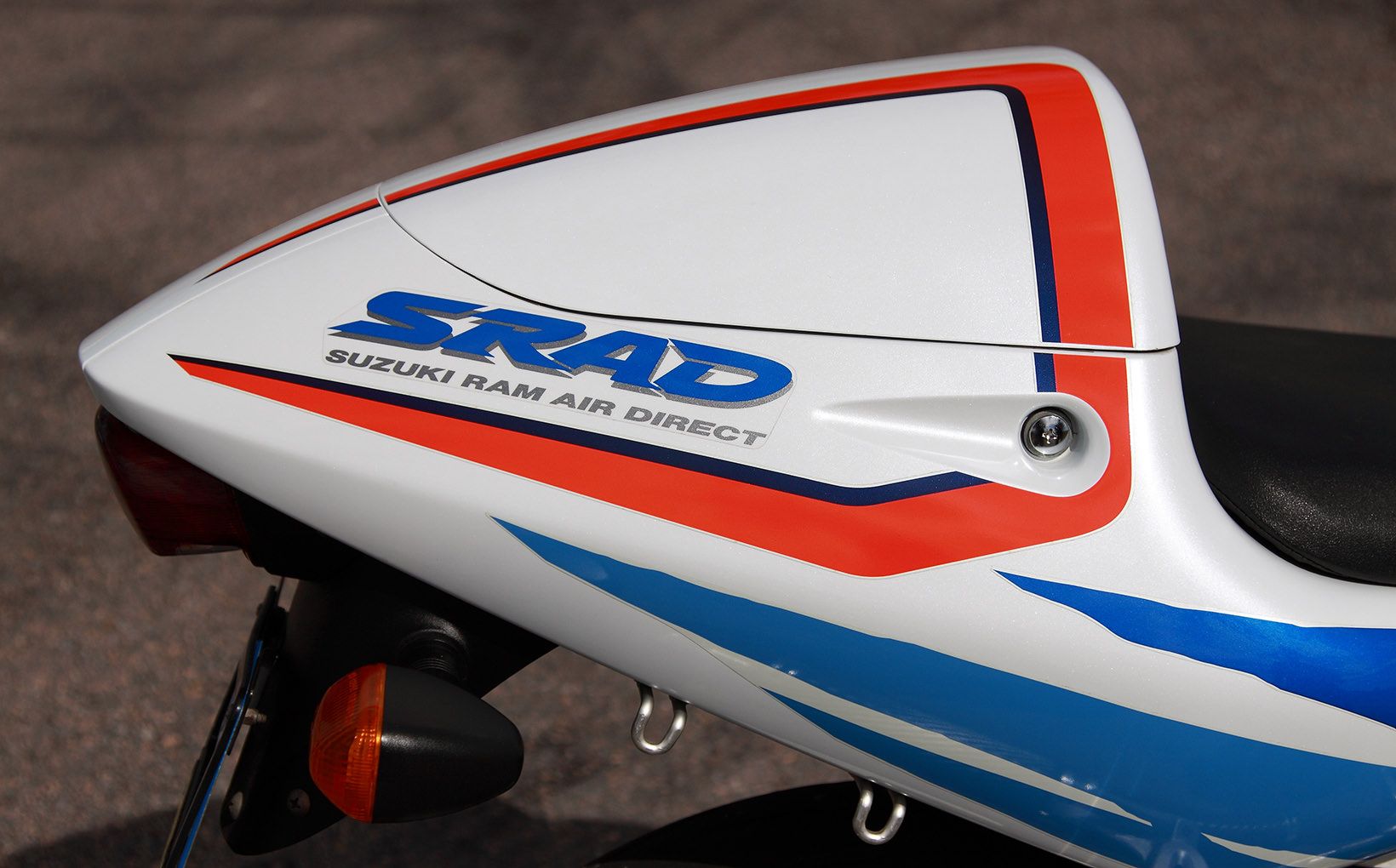 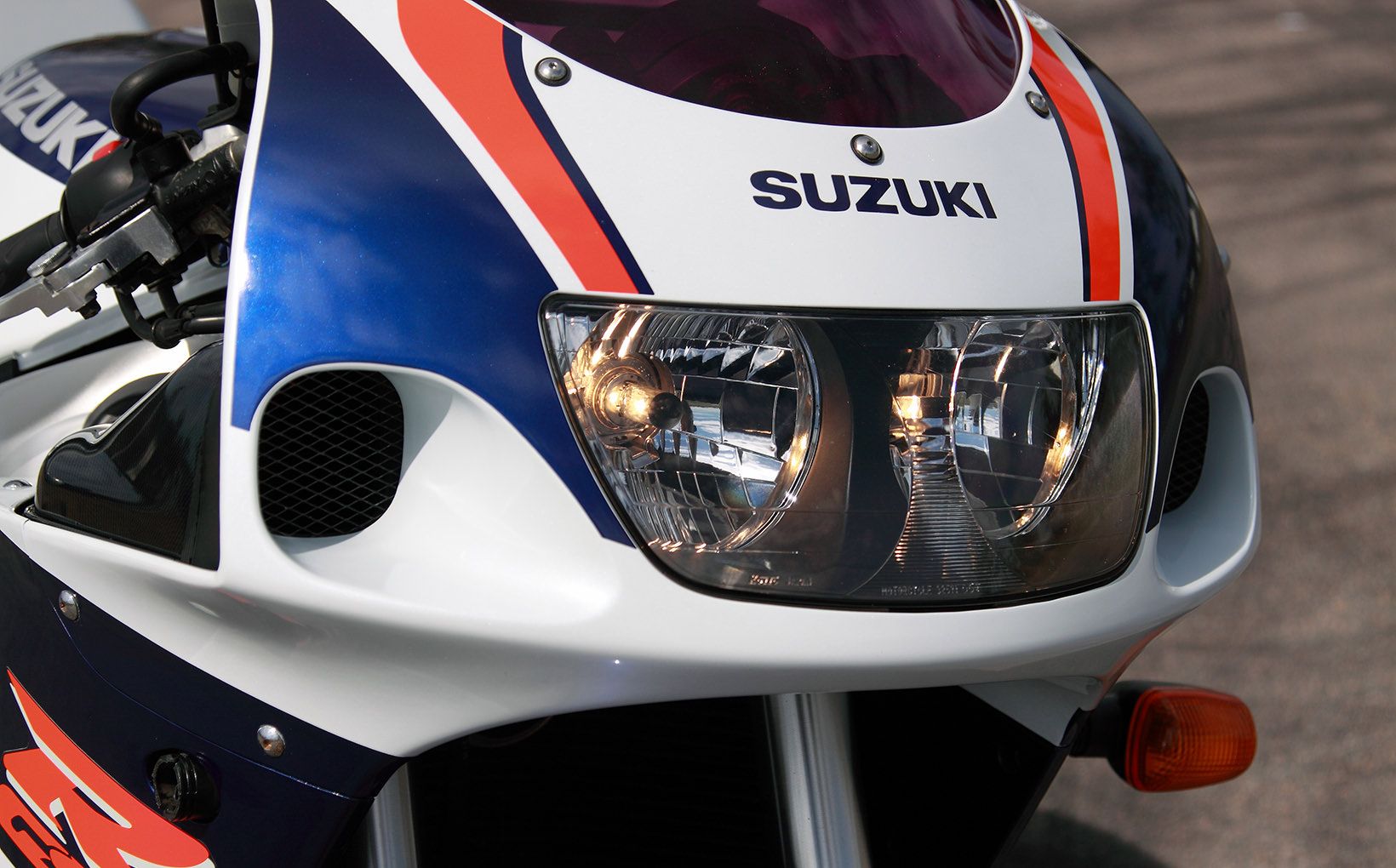 It was a time when 1000s were ultra-fast but less than ideal handlers and 600s were insanely good handlers but screamers on the road. The GSX-R750 was dead thanks to the heavy WP and WR series and 750s were on the way out. We thought… Then Suzuki unleashed what must be considered the second wave of global 750 domination after the 1985 GSX-R – the mighty GSX-R750T.

I’ve just spent a few days on an immaculate original one up on my local twisties. And the first thing I will say is it’ll out-handle just about any modern big bore bike on the market… Stunning. Telepathic. Light. Confident. Magical. Soulful. Stylish. One with the rider. I love this bike… 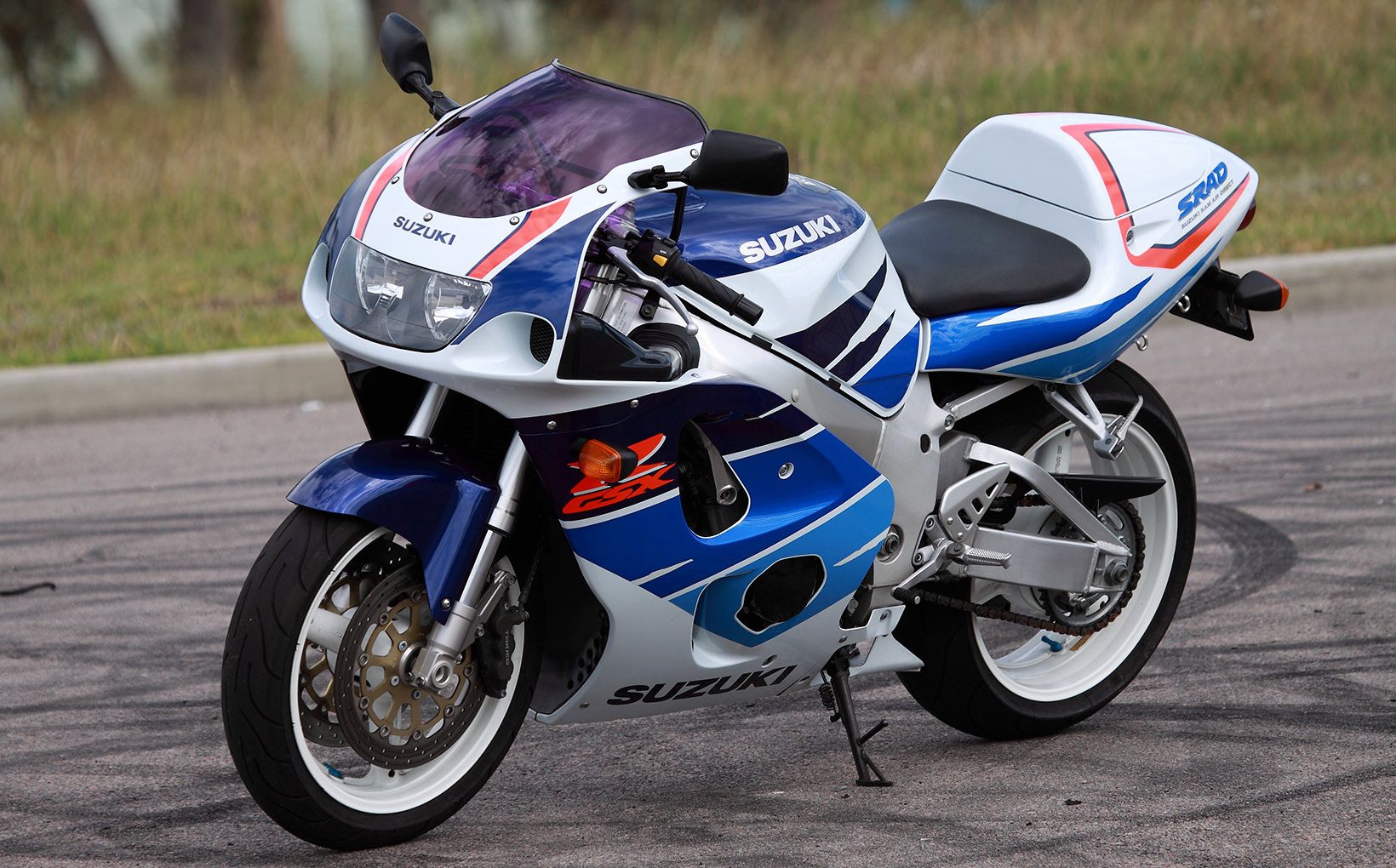 Highest power-to-weight ratio of any sportsbike at the time

Planning for the 1996 GSX-R750 began way back in April 1993 when Suzuki’s bosses met at the Hamamatsu headquarters and declared that they were going to build a new winner. “Born on the track, back to the track” had to be the concept adopted by all staff involved. The GSX-R had grown from a race bike – the works XR41 – and had become a success on the track throughout the 1980s. However, with the other manufacturers revelling in beam frame technology and Suzuki stubbornly sticking to the classic lines of its cradle frame to retain the GSX-R’s heritage, racing was suffering. Suzuki looked stupid. They needed to win again… 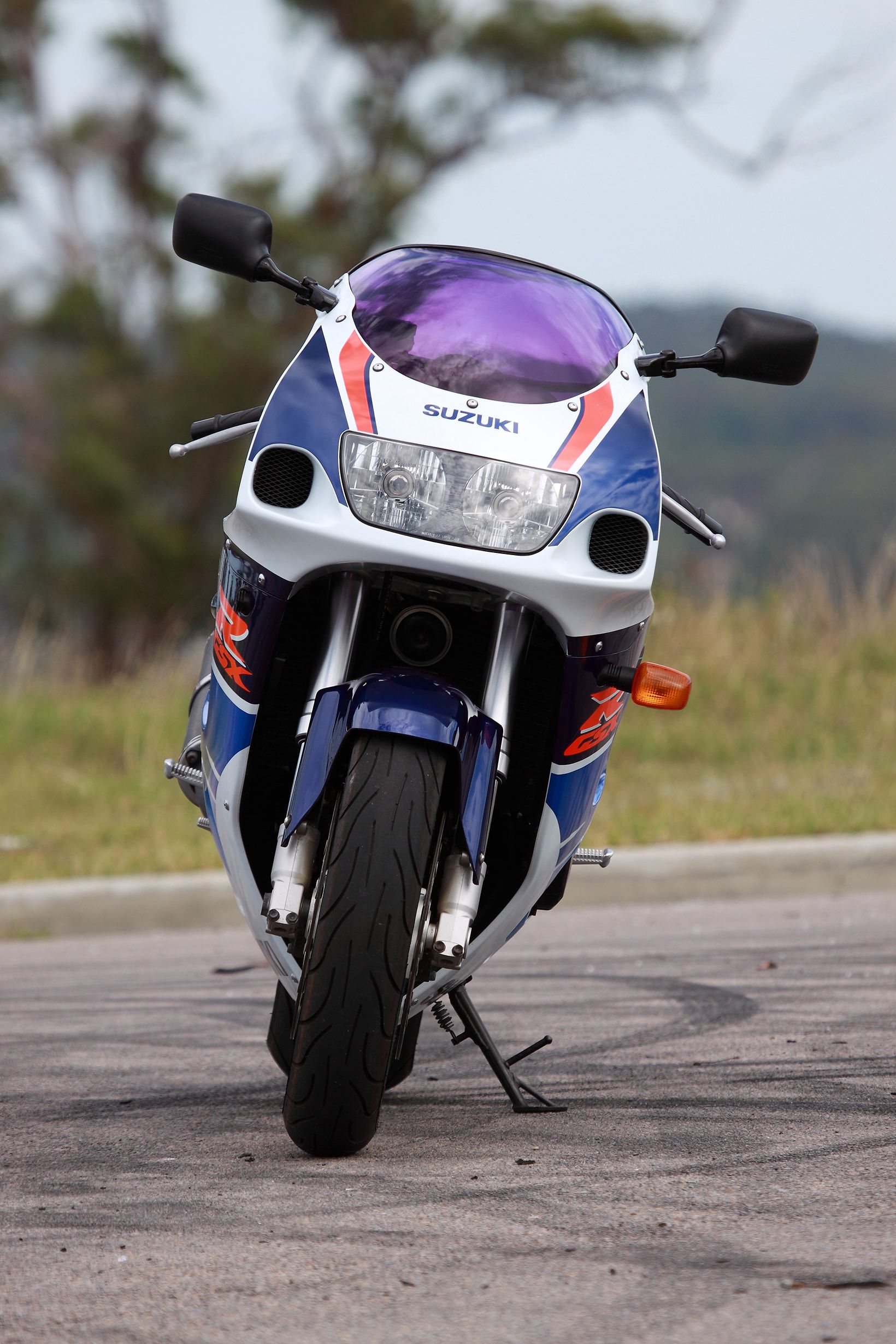 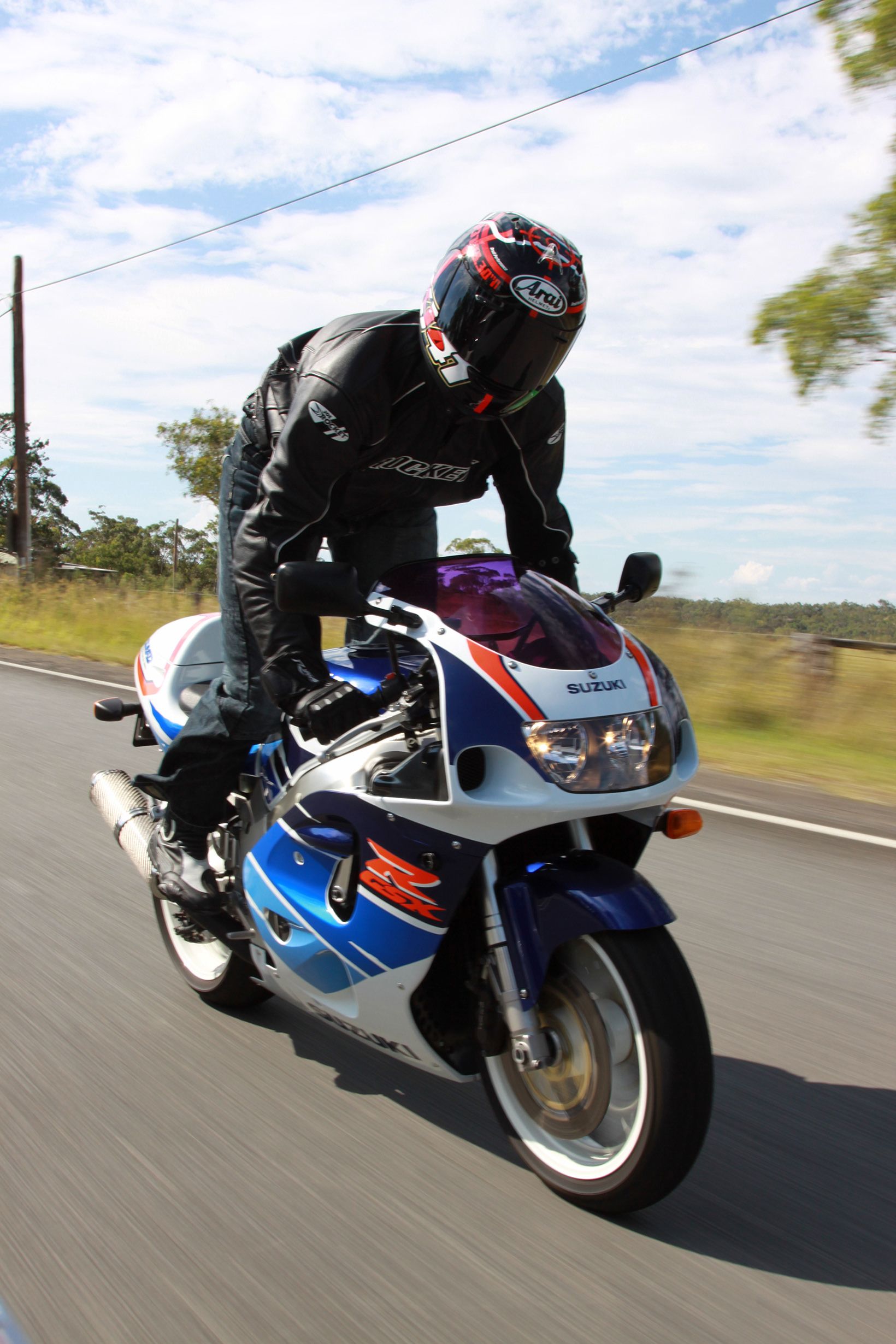 Honestly the most fun I’ve had in a long time on two wheels!

The job would be left entirely to the engineers and project leader, something never attempted by Suzuki who, along with all manufacturers, use market research to determine motorcycle design. Only Honda had risked such a step, with the 1992 Fireblade, and we all know what a success that was. So it was balls-out for Suzuki with the new 750…

Another first for Suzuki was to make the entire project ‘integrated’ – so no separate chassis and design team producing separate components. Everyone on the 750 team had to work as one machine. In perfect harmony.

They started with Kevin Schwantz’s winning RGV500 grand prix machine, using the wheelbase, aerodynamic specifications and height as guidelines. So, producing a 750cc four-stroke engine that compact meant all the rules had to be re-written. Engine designer Masahiro Nishikawa had his work cut out for him. The engine also had to challenge the new trendy 900s…

750cc was the WSBK and WEC limit so was the only choice. The rest was open. 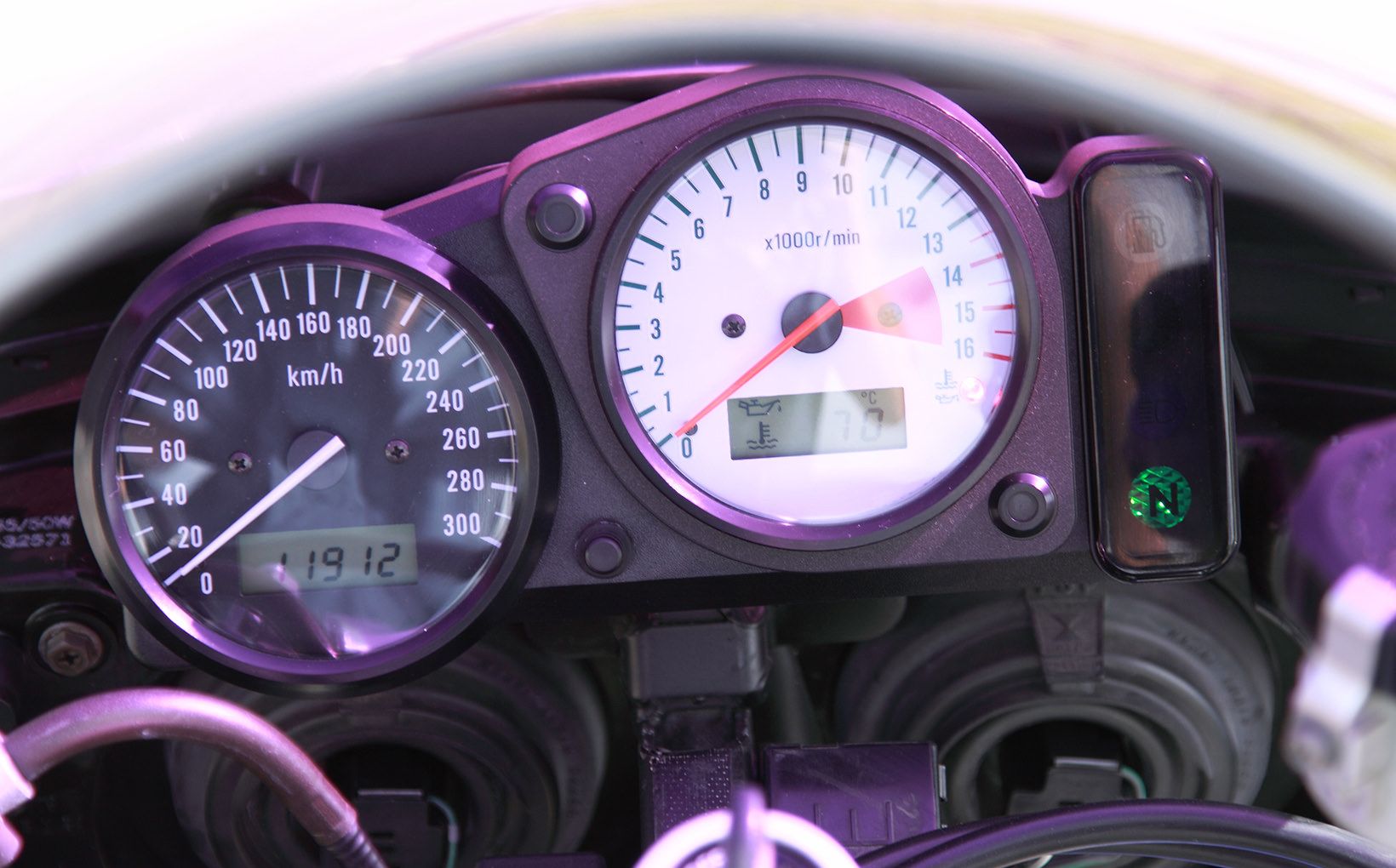 Bore x stroke was set at 72 x 46mm for a 13,500rpm redline – the same dimensions that Yamaha and Honda used in their 750s at the time. DOHC would go without saying, with shim under bucket. The combustion chambers a compact 15cc with 11.8:1 compression and an included valve angle of 29º with a short downdraught port. Perfect.

The gearbox shafts were located behind and below the crankshaft, shortening the engine with a bolt-on counterweight. SCEM (Suzuki Composite Electro-chemical Material) applied directly to the alloy surface of the cylinders rather than using the heavy pressed in steel liners. Even with a crank-end alternator to eliminate alternator drive, the engine is still a narrow 469mm.

Magnesium was used for all covers and the engine was nine kilo’s lighter than any other Gixer and made 126hp. 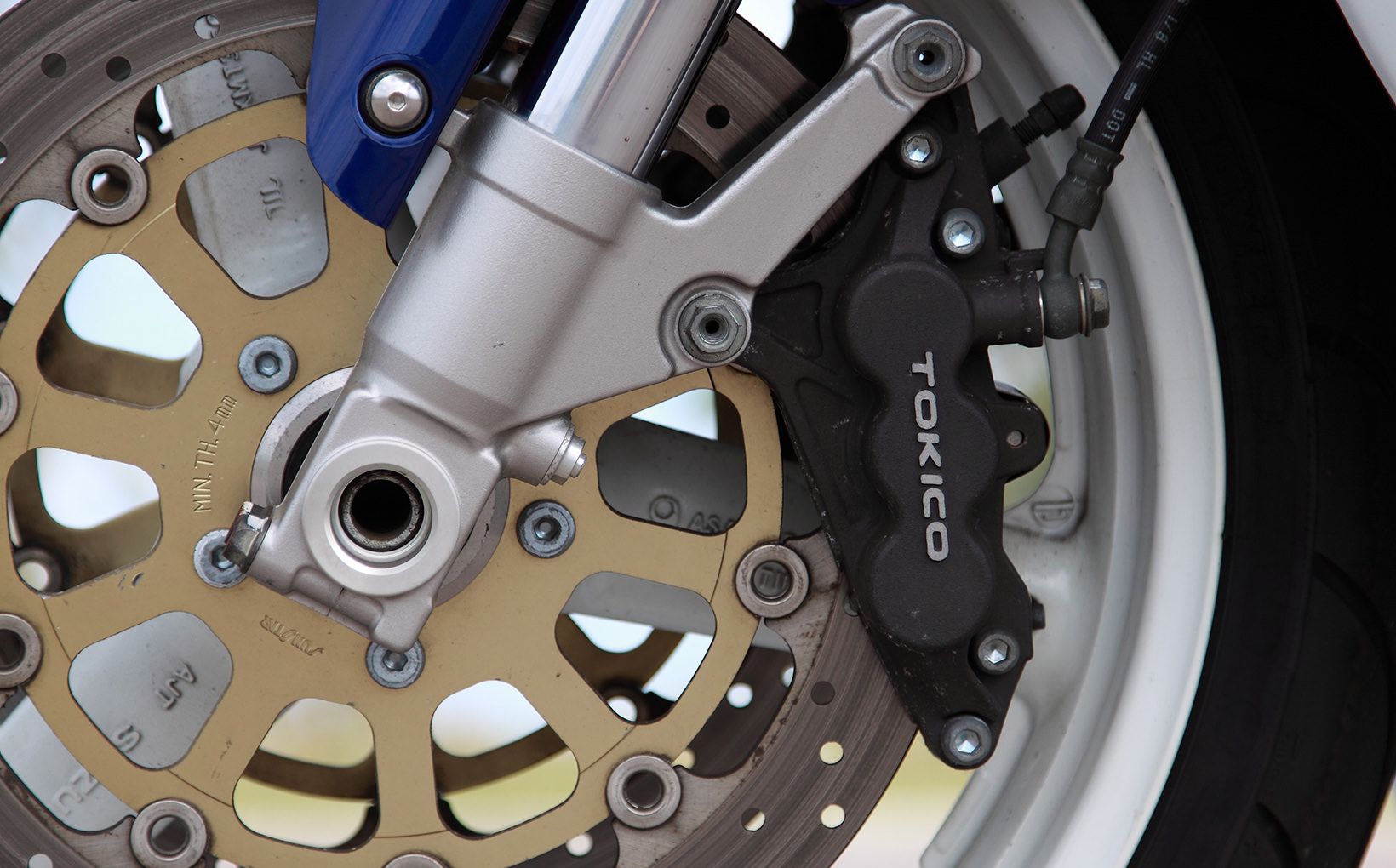 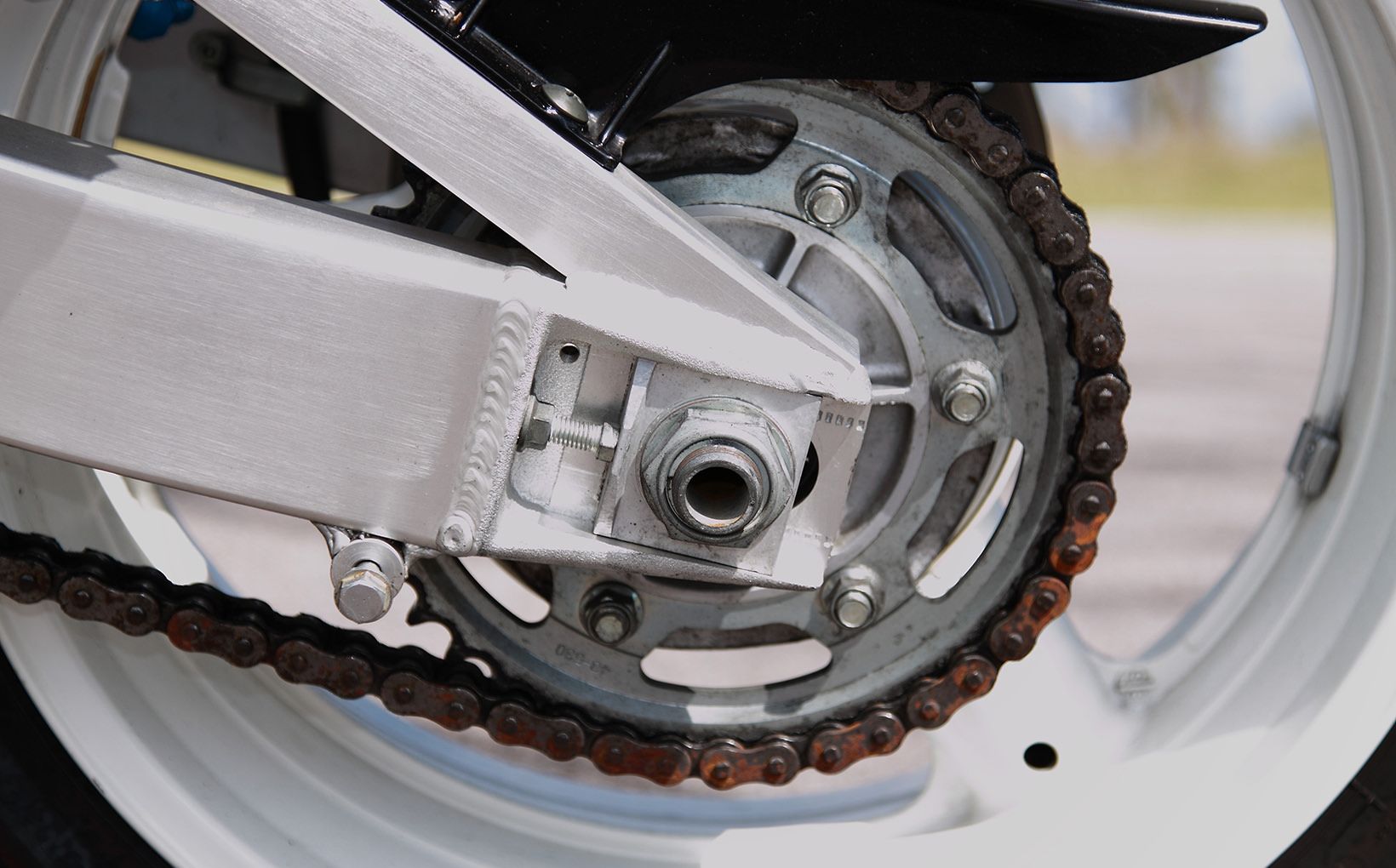 The chassis had to be light, compact and seriously good. At 1400mm the GSX-R750T is SHORTER than the RGV500 GP bike and Kawasaki’s ZX-6R! The frame was made of pressed alloy with cast steering head and forged engine mounts. It had twice the rigidity of the previous model but weighed 2.5kg less. 43mm inverted forks were chosen and the swingarm was 12% stiffer with an all-new Showa shock. The swingarm pivot point also incorporates replaceable pivot point inserts. Ride height is also adjustable via the top shock mount. With tricks like hollow axles the entire package was factory racer light… 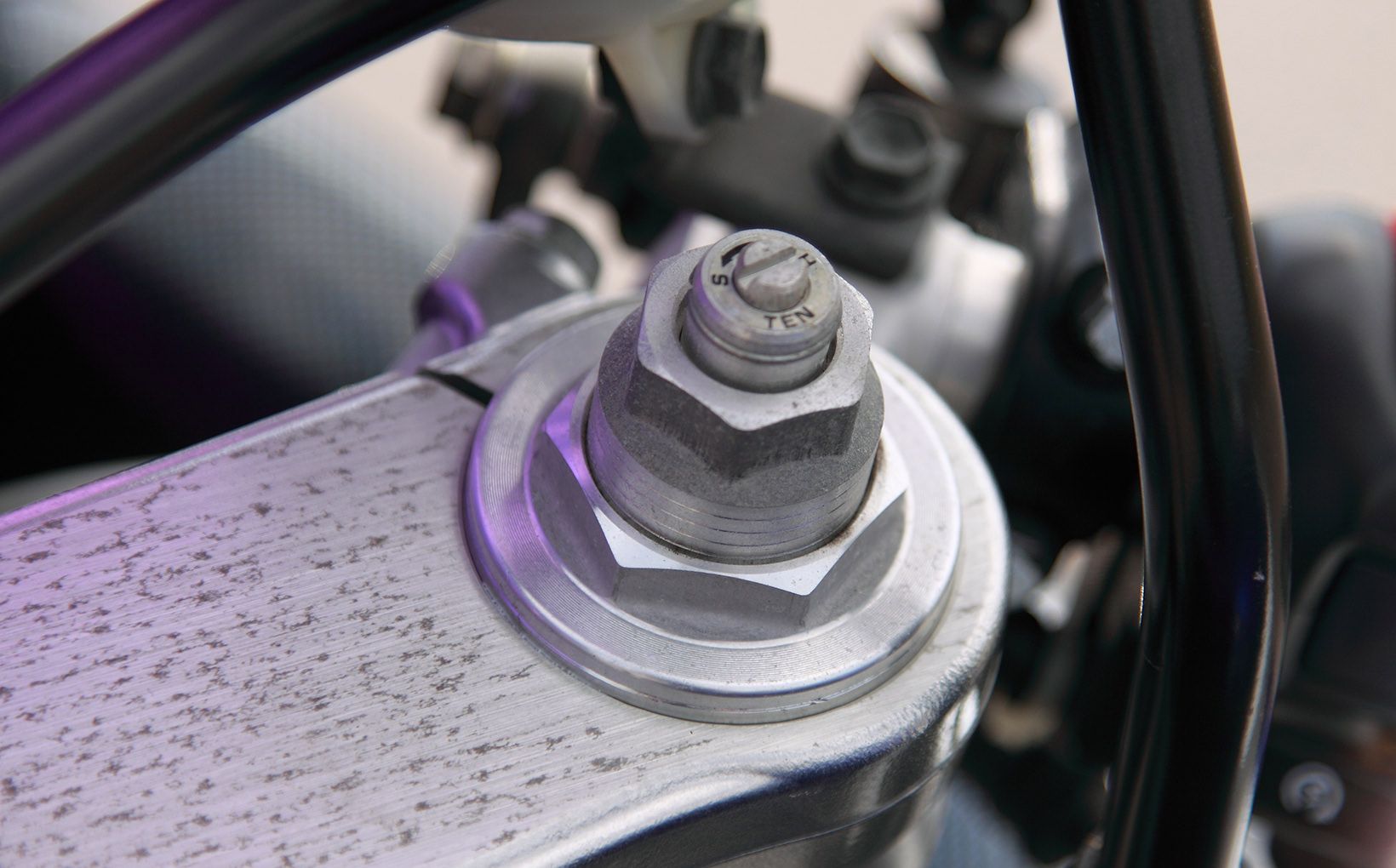 Massive six-piston brakes were also included and a new sleek shape based on wind tunnel testing and the RGV500 fairings gave the bike a serious look.

Other trick things many people miss are wheel spacers that stay in place during wheels changes, an oil filter mounted at 90º to the engine, a hinged fuel tank, and bugger all fairing fasteners – all this came from endurance racing heritage… 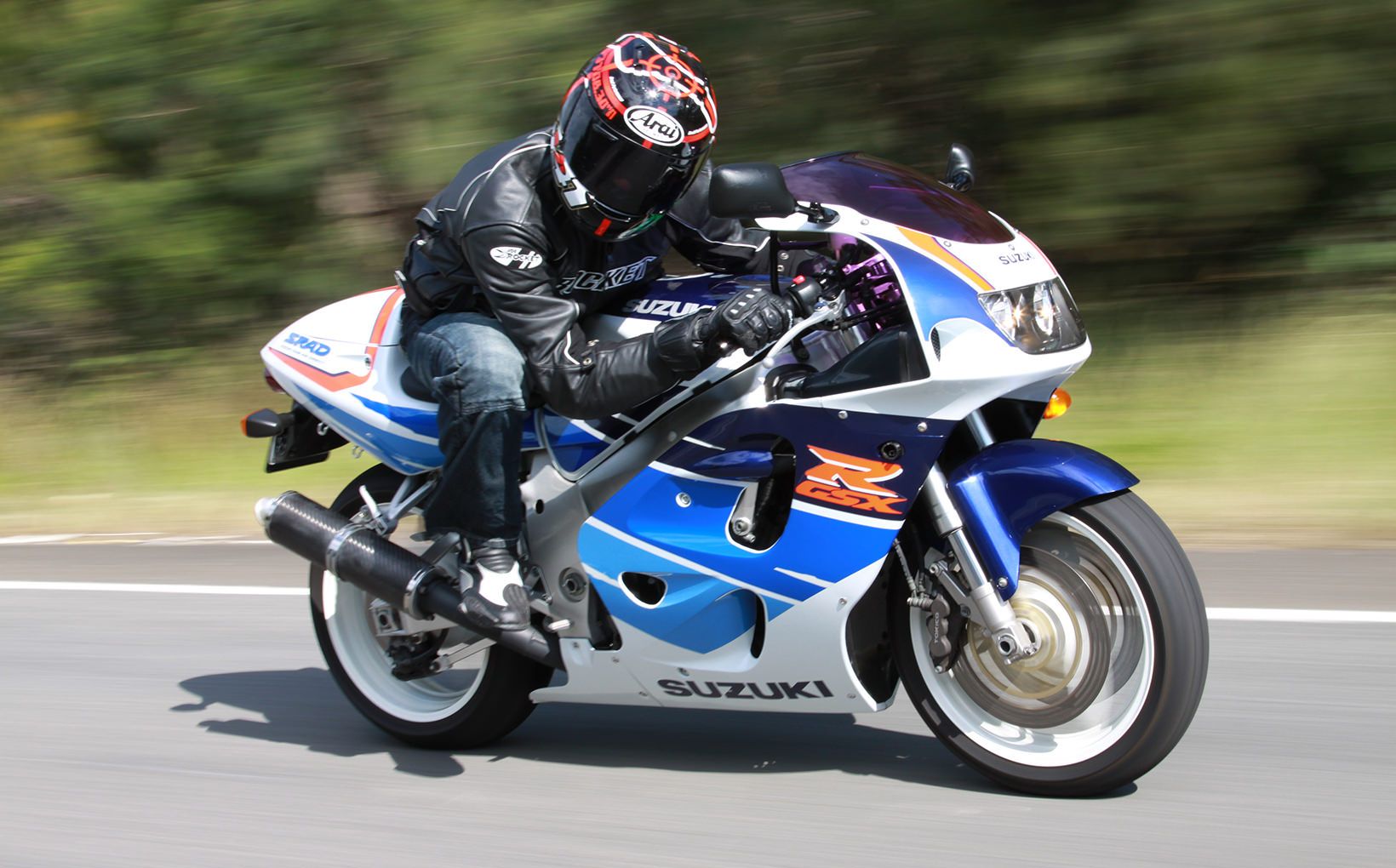 The GSX-R750T is fast becoming a collectable, because it was just so good!

I decide to go for a ride on my current 750 then jump straight on the 1996 and do the same loop. 30km of town, 15km of freeway and 30km of mountain twisties then home. I’m very familiar with my own bike, of course, and this immaculate T model had not been ridden much in the past few years. In fact, with 11,000km on the dial, it is like new. I’m nervous and don’t want any ‘incidents’.

But as I filter through traffic, I simply forget what I’m on. I honestly feel I could be on a new bike – and a good one at that. The 1996 is smoother than my new bike and is running much cooler. It feels lighter and is more comfy. I love the way I’m ‘in’ the bike not on top of it. I feel 21 again and I’m grinning.

By the time I hit the freeway I’m already in love and when I feel the torque on tap in top gear at 110km/h when passing a few trucks my heart melts. This thing stomps like a 1000. Amazing torque. 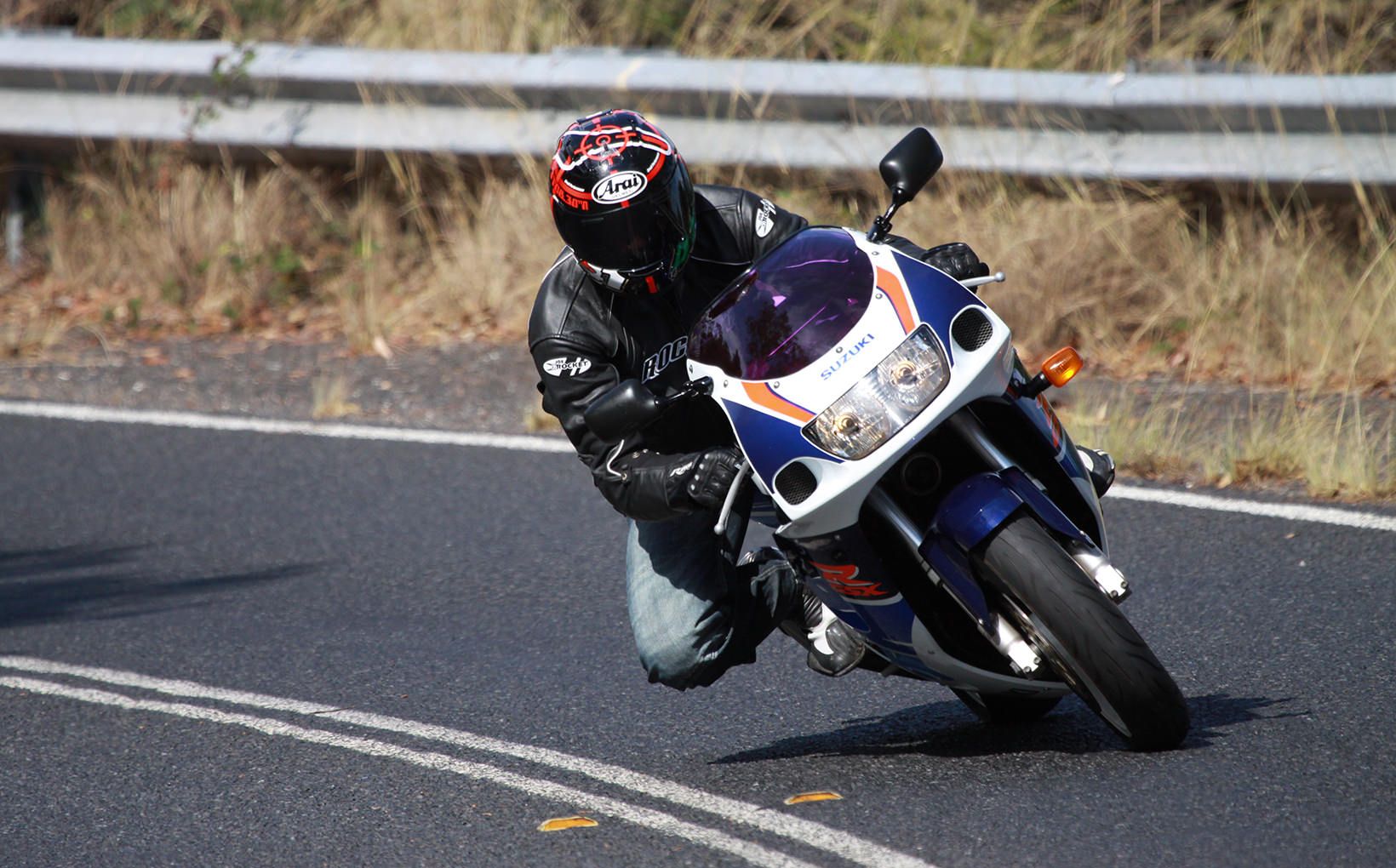 The twisties arrive and the bike turns telepathic. Within 5km of twisties on roads I know like the back of my hand the GSX-R750T is wiping it’s own backside with most modern bikes I’ve ridden through here lately. The bike is so neutral and stable yet initial turn-in on or off the brakes is so, so accurate and quick, followed by a smooth yet rapid transition to full lean with no stand up on the brakes or bumps and an incredibly confidence-inspiring feel of mechanical grip at the front.

As I peel through the turns, I can feel the decades of WSBK and WEC heritage in the geometry of the bike. The chassis does not put a foot wrong and my entry speed and mid corner speed and grip is higher than on the new bike. Off corners the shock struggles but the revvy responsive engine slingshots the bike from turn to turn, the gearbox smooth and the acceleration just as good as a new bike.

Braking is not the best – initial bite is weak and the lever needs a big squeeze by modern standards but the bike’s behaviour is perfect. I’m not getting tired on the bike and feel like I’ve barely used a muscle through the tight flicking sections that normally wear me out. It’s just a mind-blowing package… 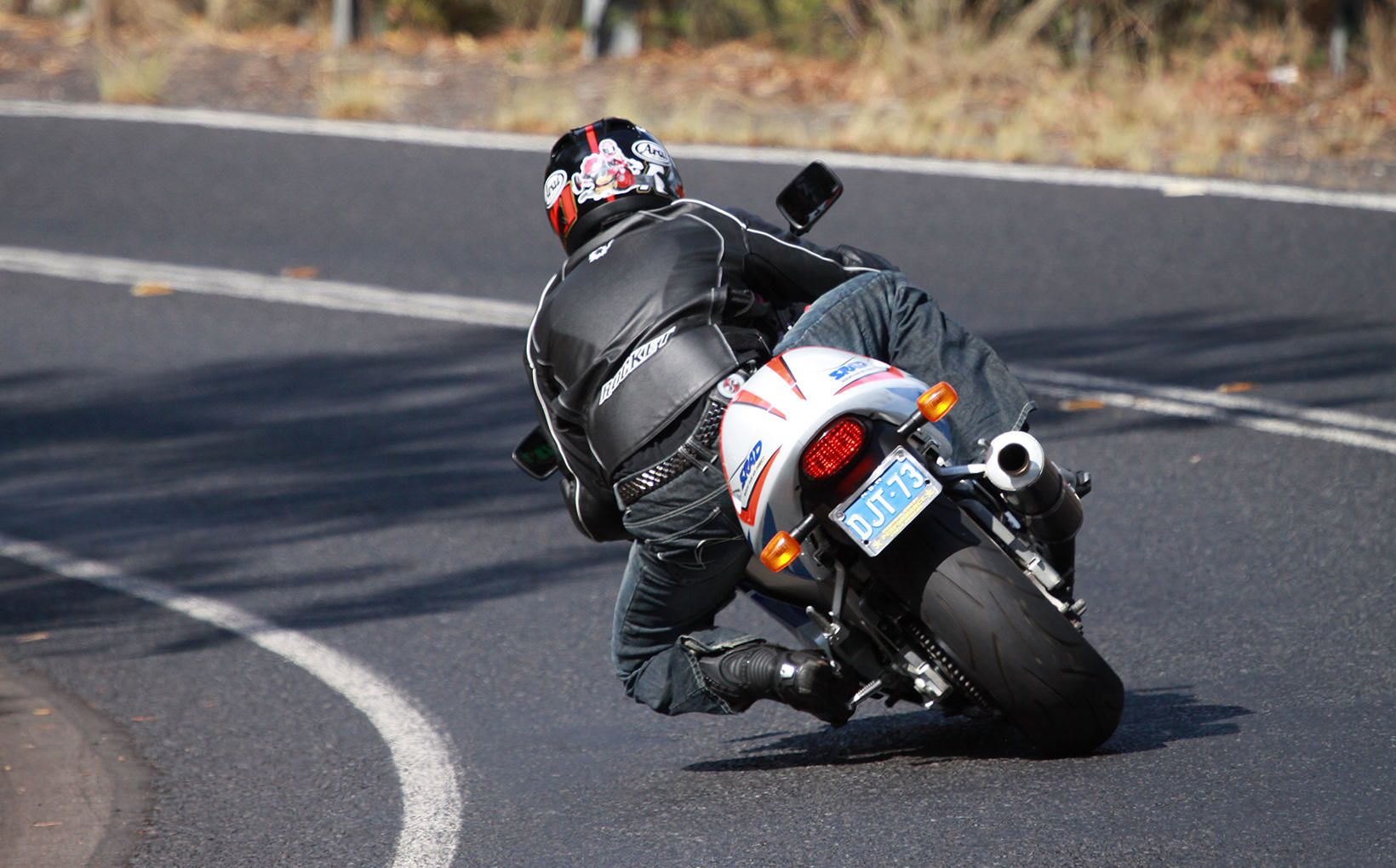 Loads of drive and acceleration off corners

Throw in some modern suspension internals, Kevlar brake lines and modern pads, and new current generation rubber, and this bike is ready to run in 2020.

Most of all – it has soul. You can feel the passion and the skill that has gone into this special machine – a machine that revolutionised the sportsbike world and is quite possibly the best 750cc inline four ever built…

They say that the press reaction was incredible at the world launch of the GSX-R750T held at Misano in the old reverse direction days. I wasn’t there as I was not a journo yet. But after sampling the bike I can only imagine the stunned silence in the pits after the first session. There must have been quite a few smiling Japanese engineers and a few gob-smacked journalists that day… 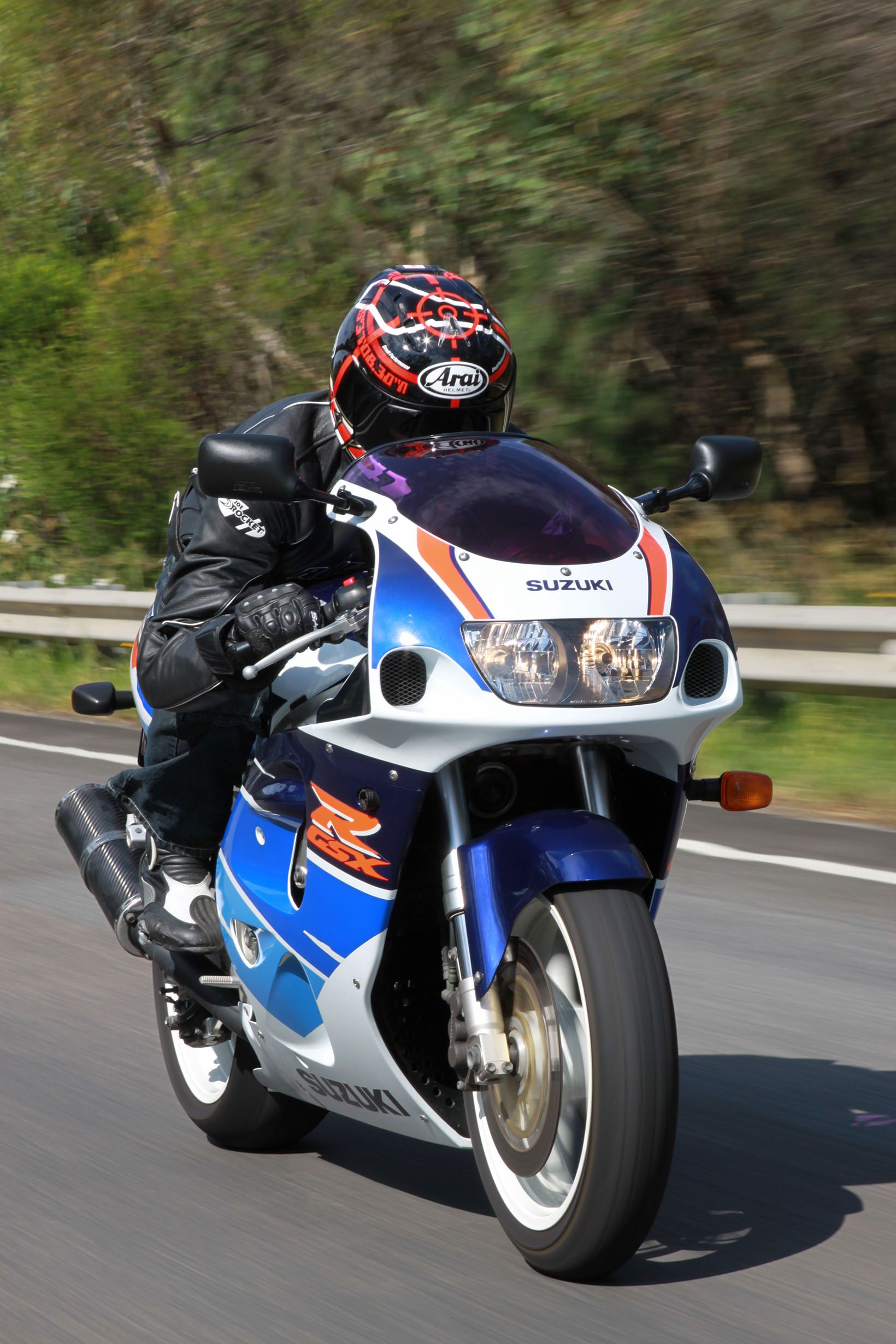 A seriously fast bike, even by 2020 standards 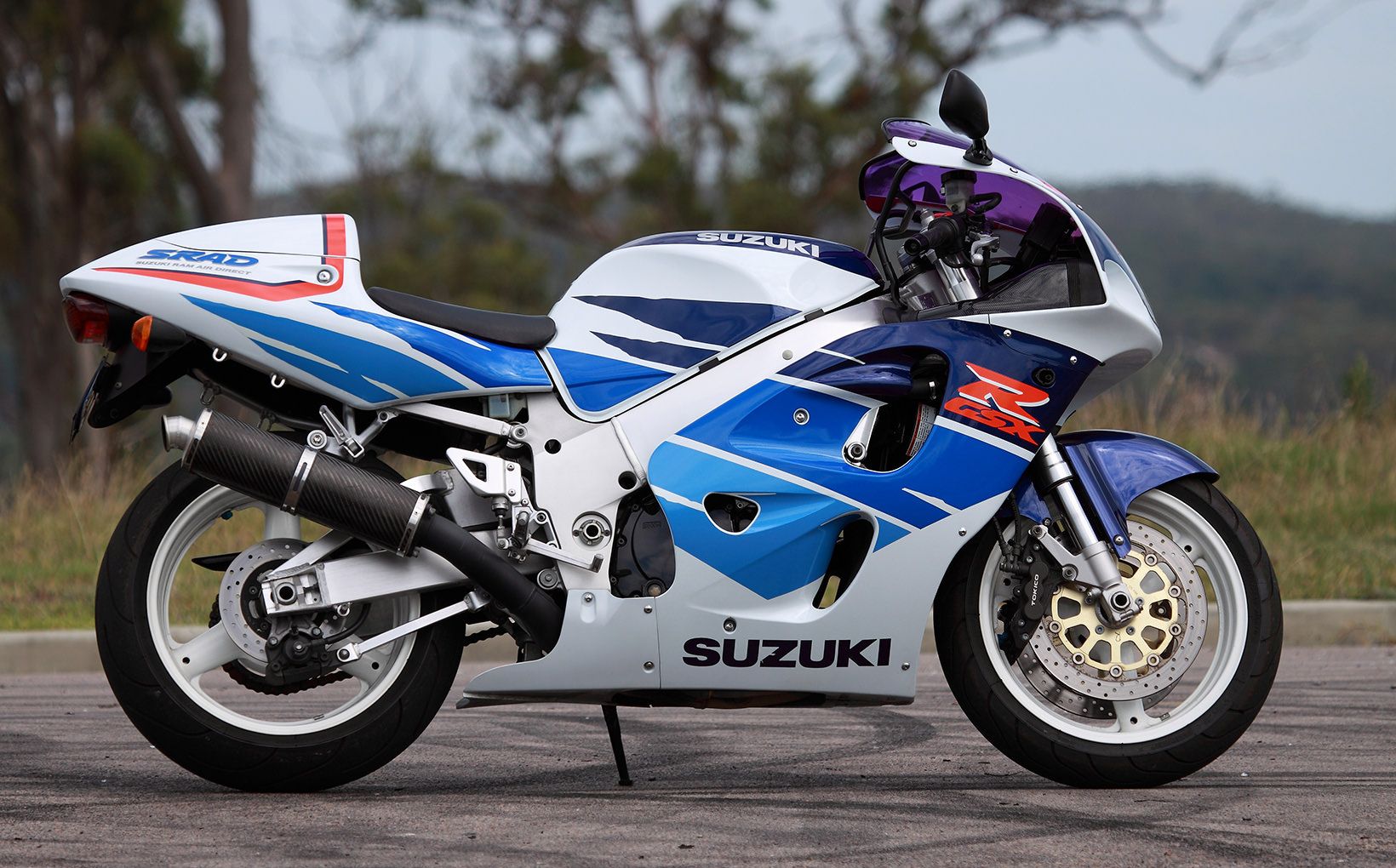 1400mm wheelbase shorter than the RGV500

I LOVE THIS BIKE

Dave bought this GSX-R750T brand new in 1996 from a local Suzuki dealership on the Central Coast, NSW. A Suzuki fanatic that previously owned some immaculate RG250s, Dave decided before the first 10km was clocked up that this bike was special. Not your average new model and a definite keeper. The bike has 11,000km on the clock and has never been wet. Not washed, ridden in the rain or even wiped with a damp cloth. Every inch of the bike looks like new. It’s a true showroom example.

“I just love the bike. I have a GSX-R1000K6 as my daily ride so I rarely get the 750 out. I get a lot of enjoyment out of cleaning it, firing it up and just sitting in the shed and admiring the bike. When I do ride the bike it never fails to impress me and leave me grinning. It’s a keeper forever this one”…