Walking around this stunning Moto Morini 500 twin at a local shop known for restoring and maintaining rare collectables like this baby, which belongs to a prominent Sydney collector, has me drooling. 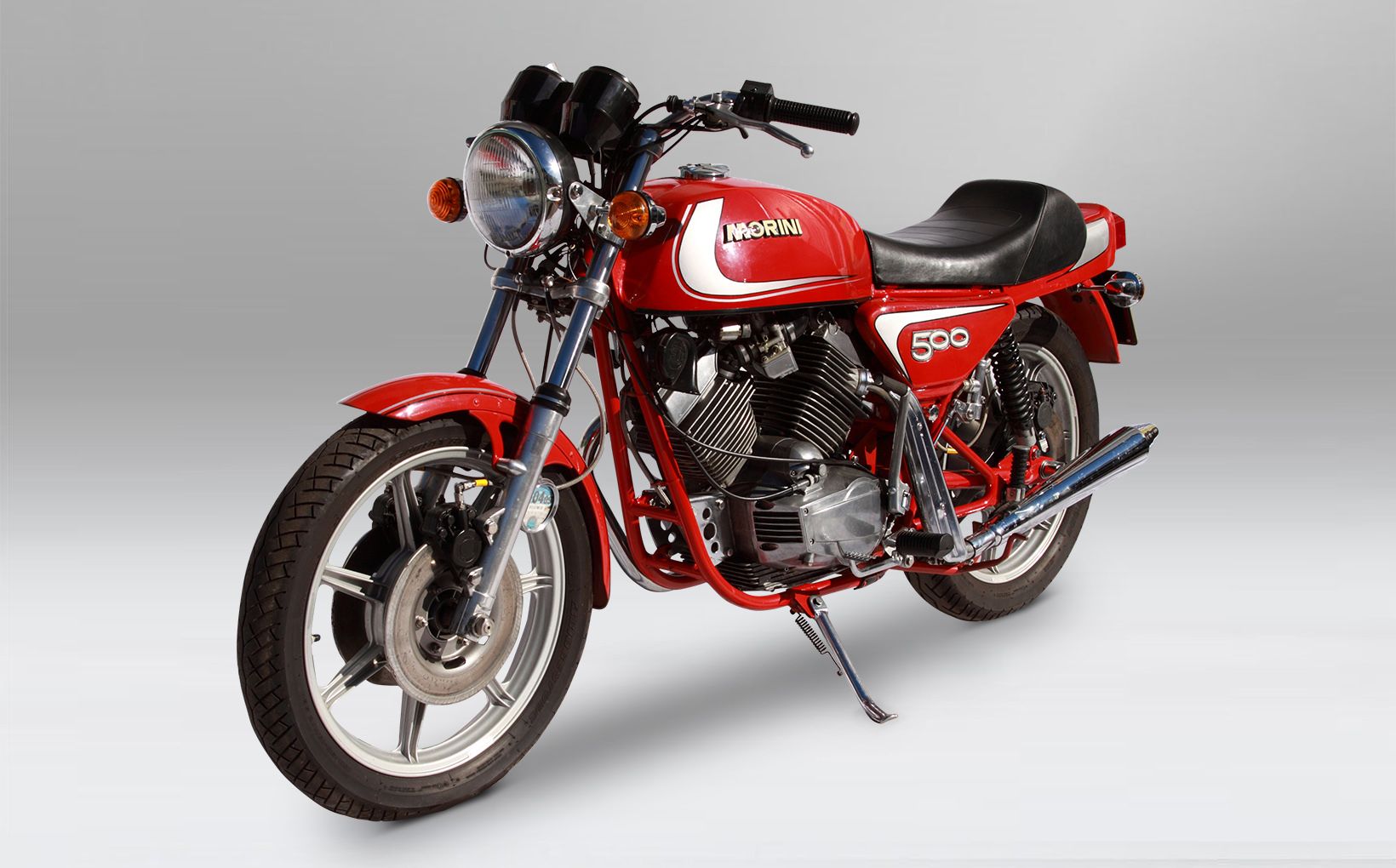 At 167kg the Moto Morini 500 Twin is a lightweight and nimble machine for the era.

Traditionally I’m a fan of early 1980s Japanese muscle and Japanese two-stroke GP replicas. I’ve never been a huge Ducaitisti or early Euro bike person but this thing does it for me. It’s tiny. It’s amazingly well built. It’s sporty and it is high tech for its day. 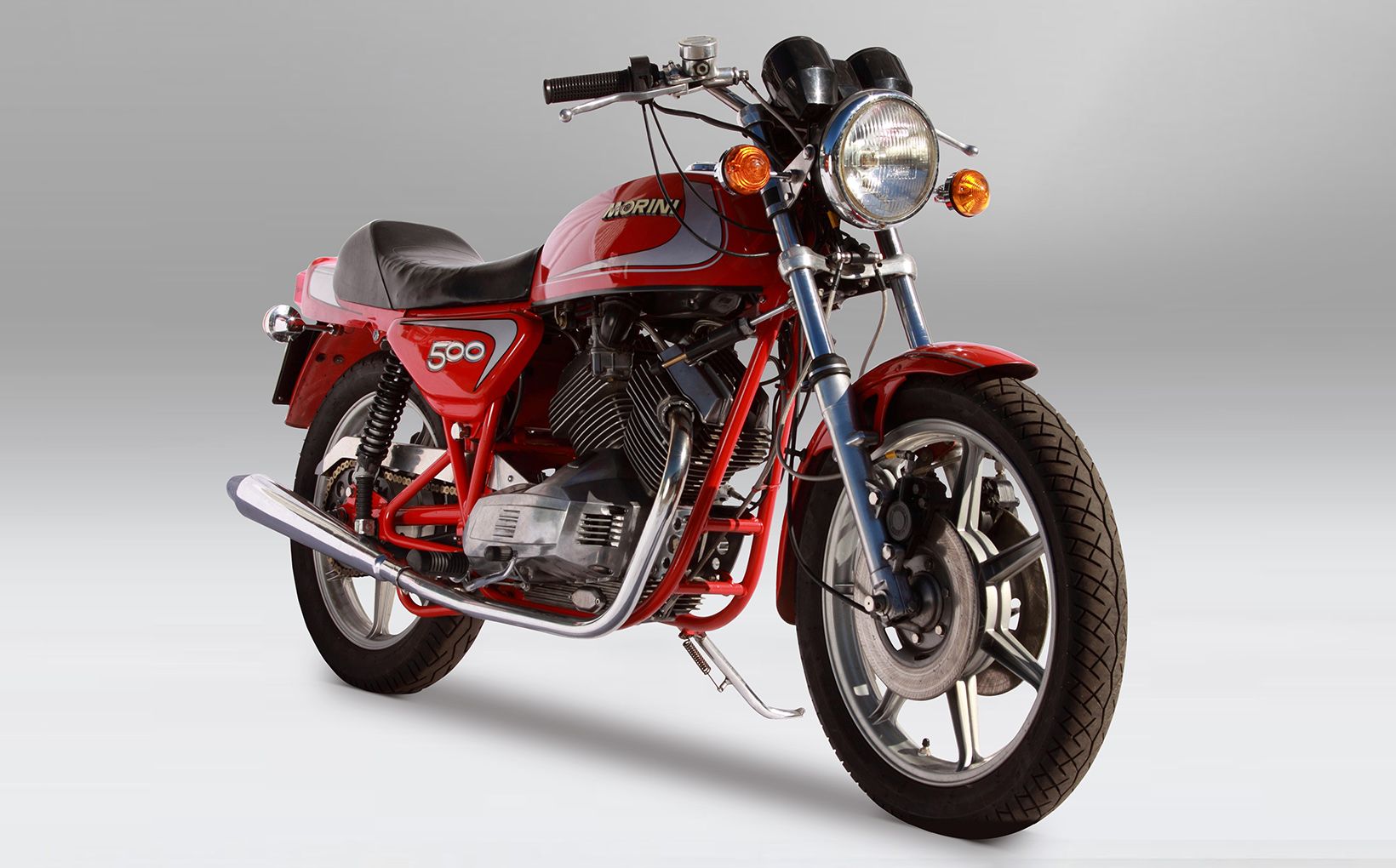 The Moto Morini 500 Twin was made right up until 1986, almost a decade of production.

The engine was a bored and stroked version of the 350 and an absolute trick bit of kit. No wonder the modern Moto Morini twins are so, so fantastic. 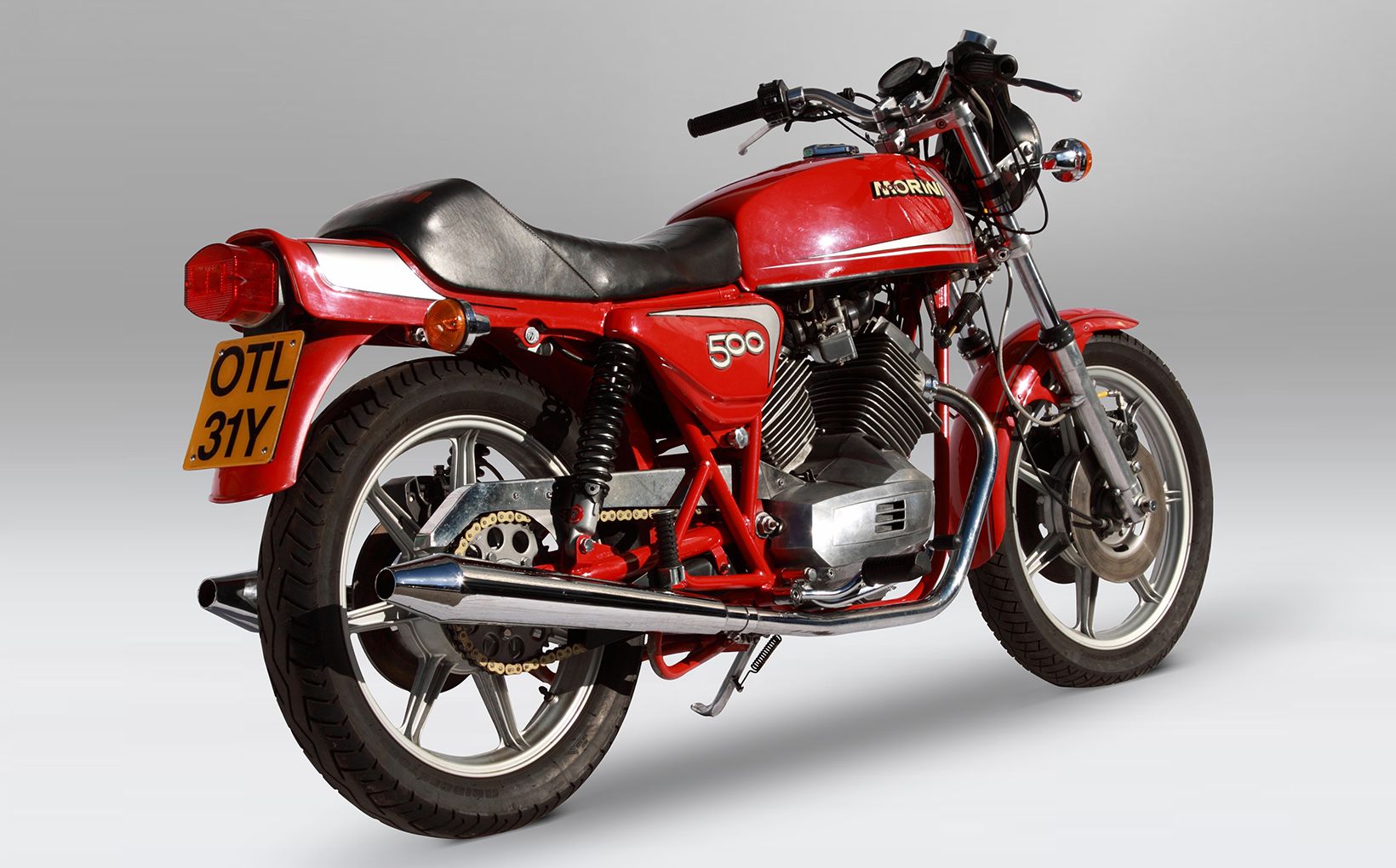 The cylinder-heads on the 500 were Heron heads that were milled flat, with the combustion chamber recessed into the piston crowns! The engine also had a one-piece forged crankshaft, plain main bearings, and the conrods run on a common pin in desaxe design with the cylinders offset by 50mm. 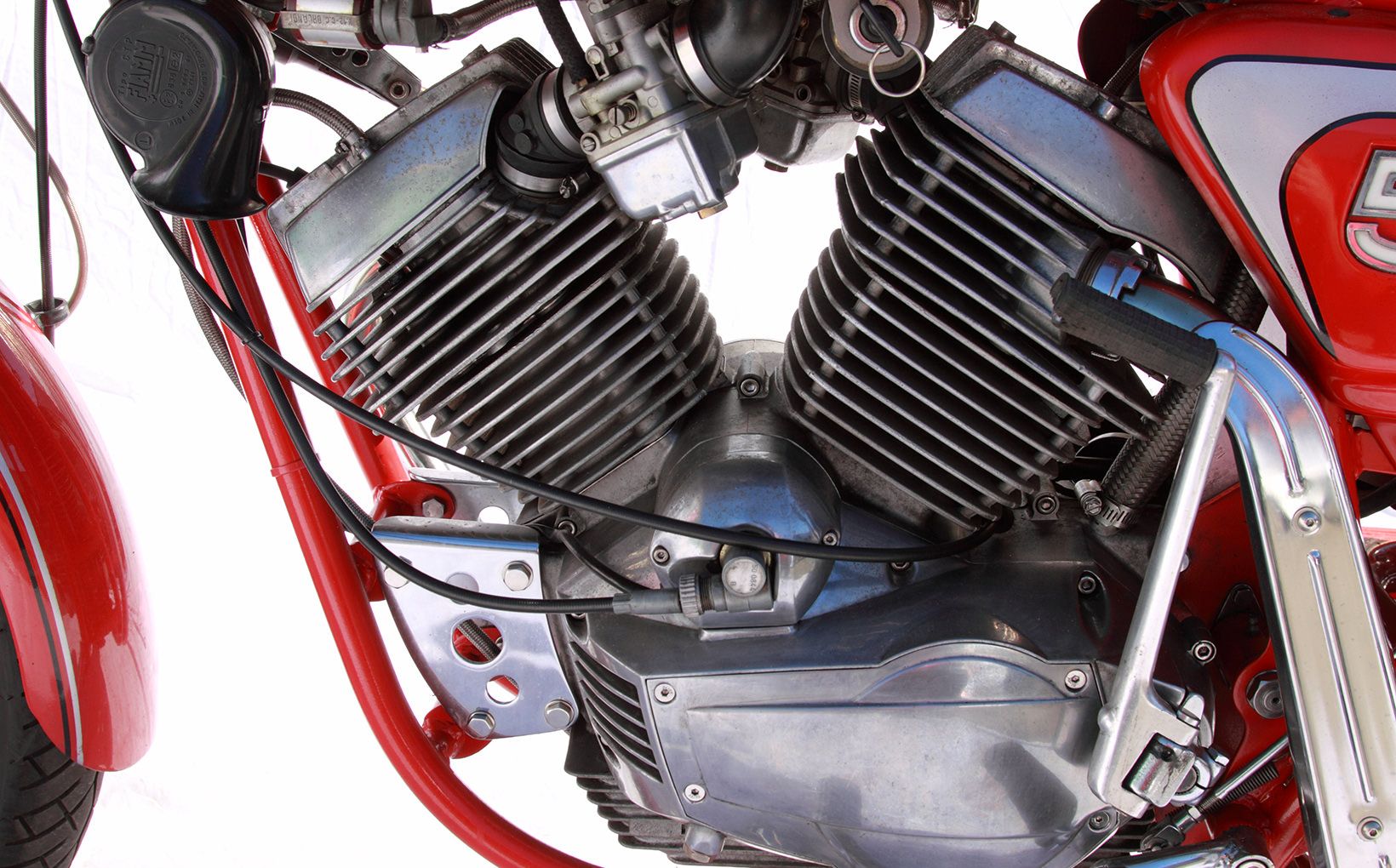 The big brother of the 250 and 350 Moto Marini models, the 500 cylinders were interchangeable.

The front and rear cylinders and heads are interchangeable and fuelling into the twin pipes is by Dell’Orto 26mm VBH square slide carburettors that draw from a common airbox. The cam drive was via belt and the bike even had a Ducati Electronnica electronic discharge ignition system and the six-speed gearbox utilized a six-plate dry clutch. 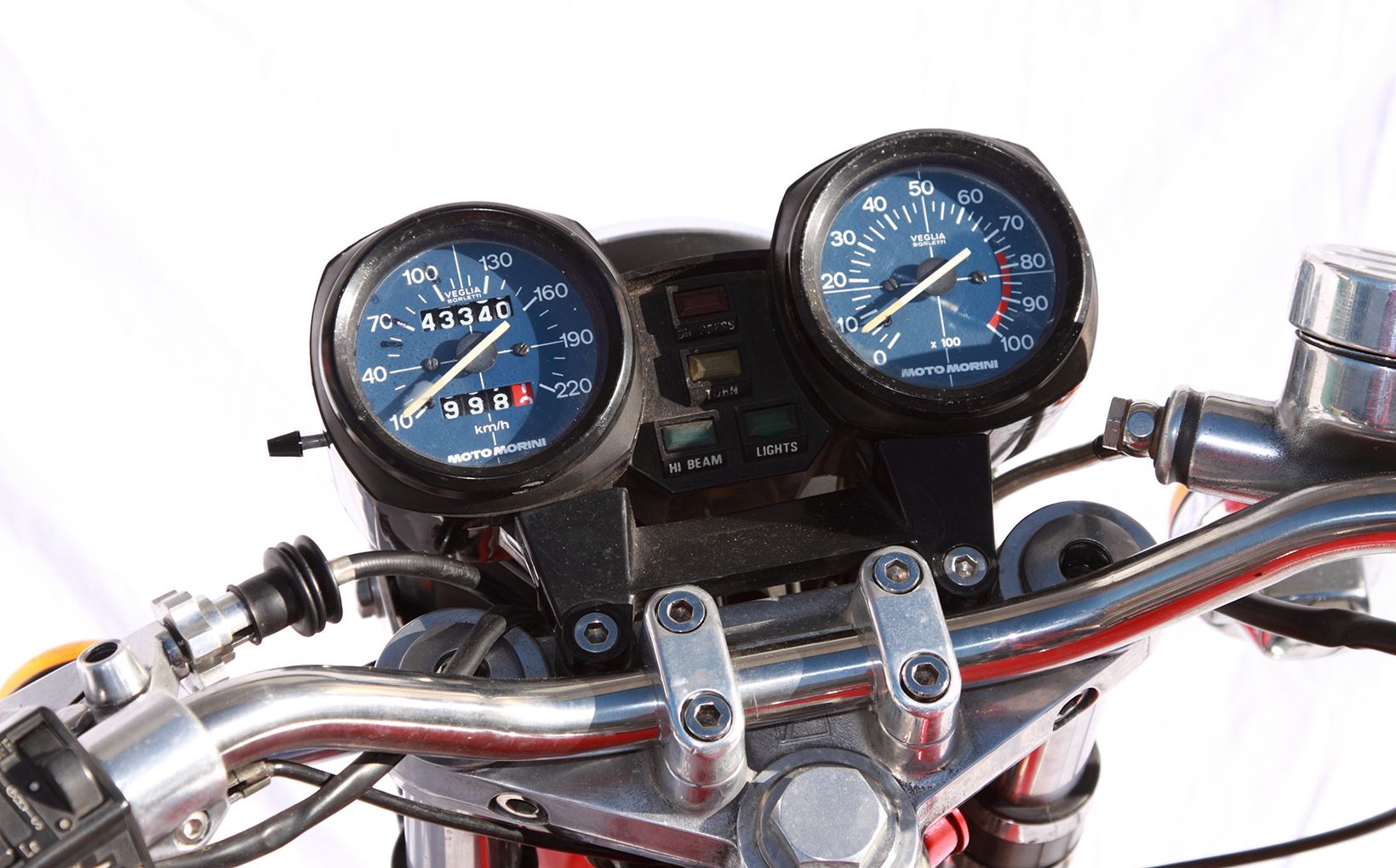 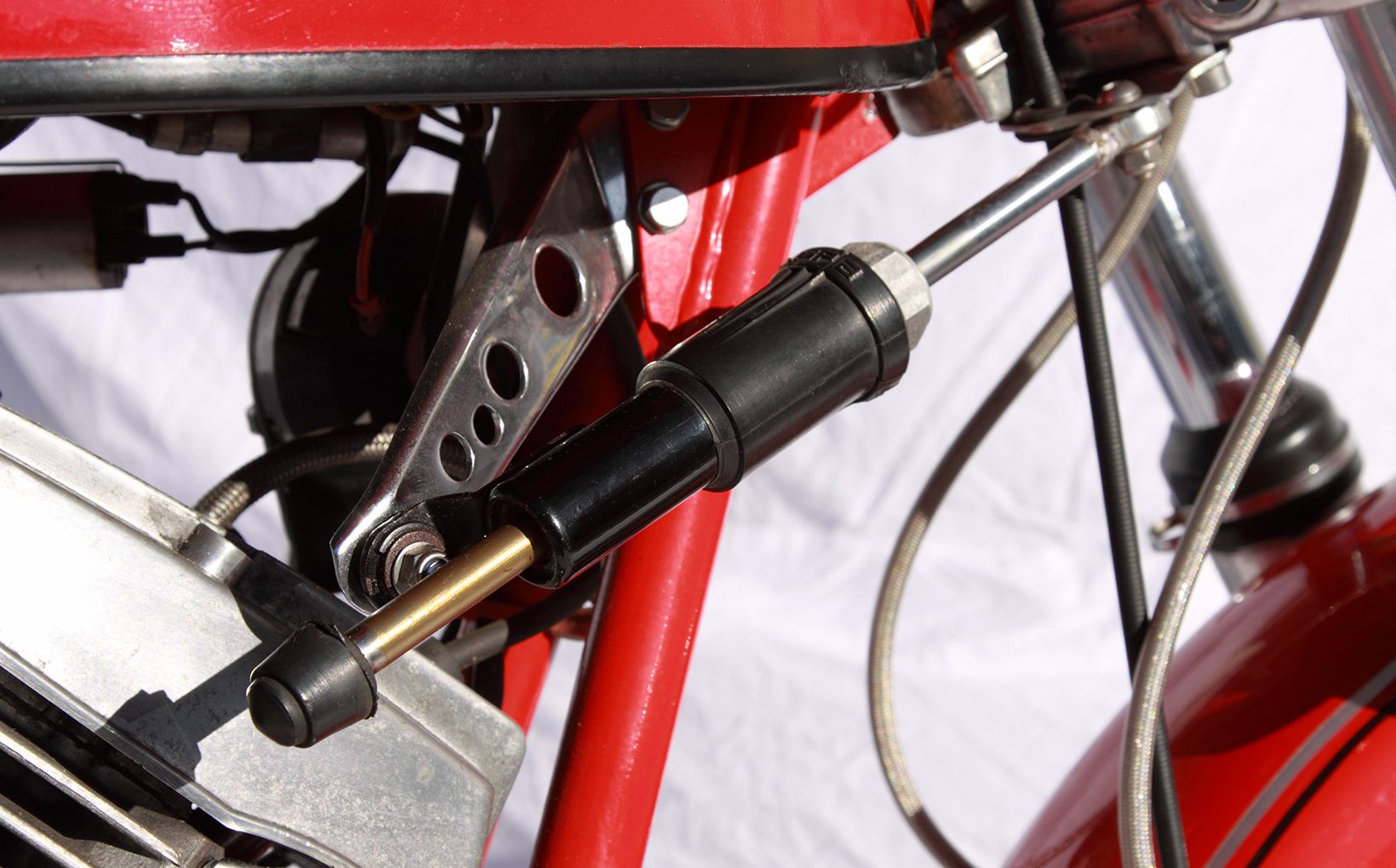 Lubrication is by crank pressure feed to the rockers via the pushrod tubes, not via oil pump, so it was crucial to warm the bike up to avoid damage. 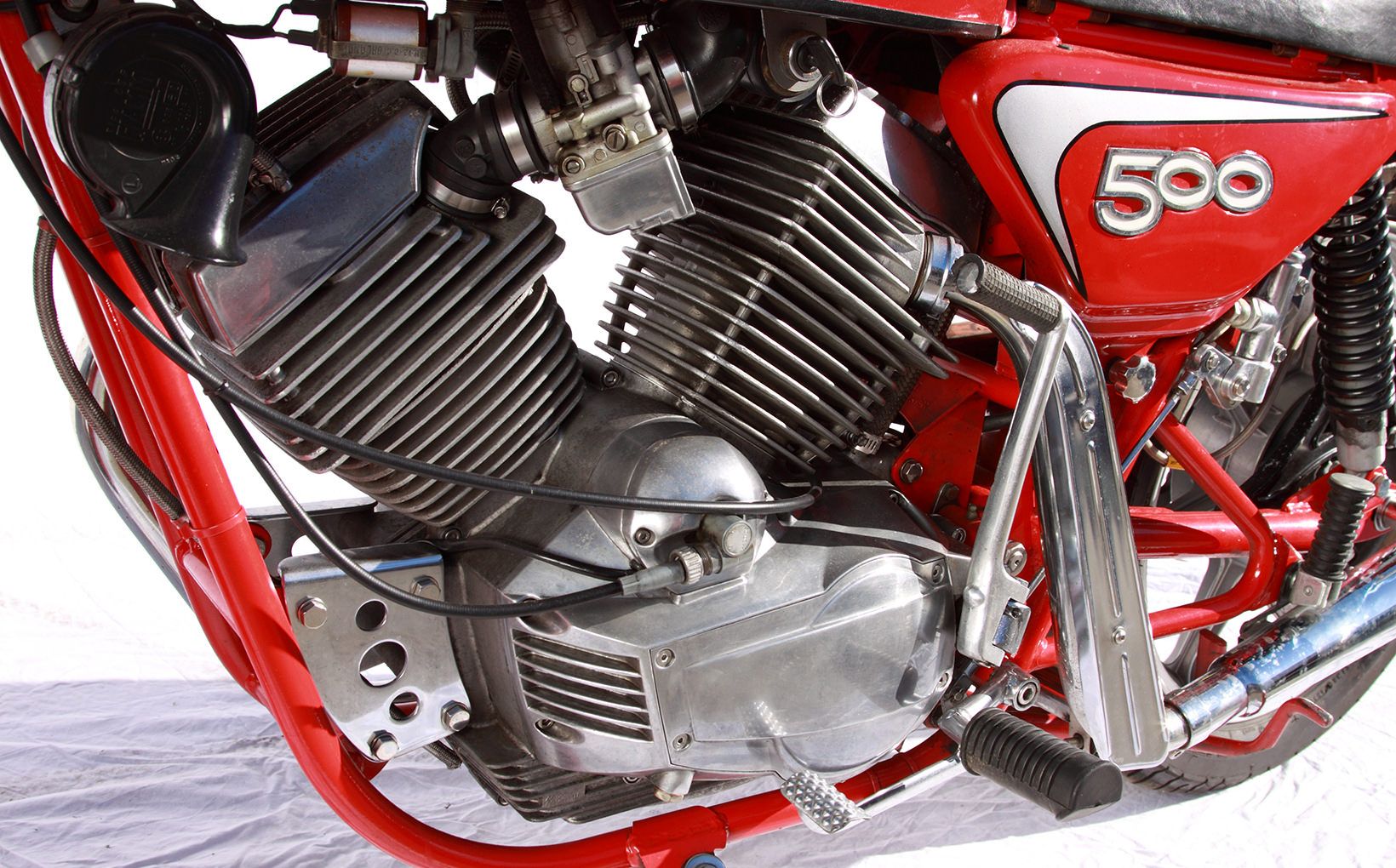 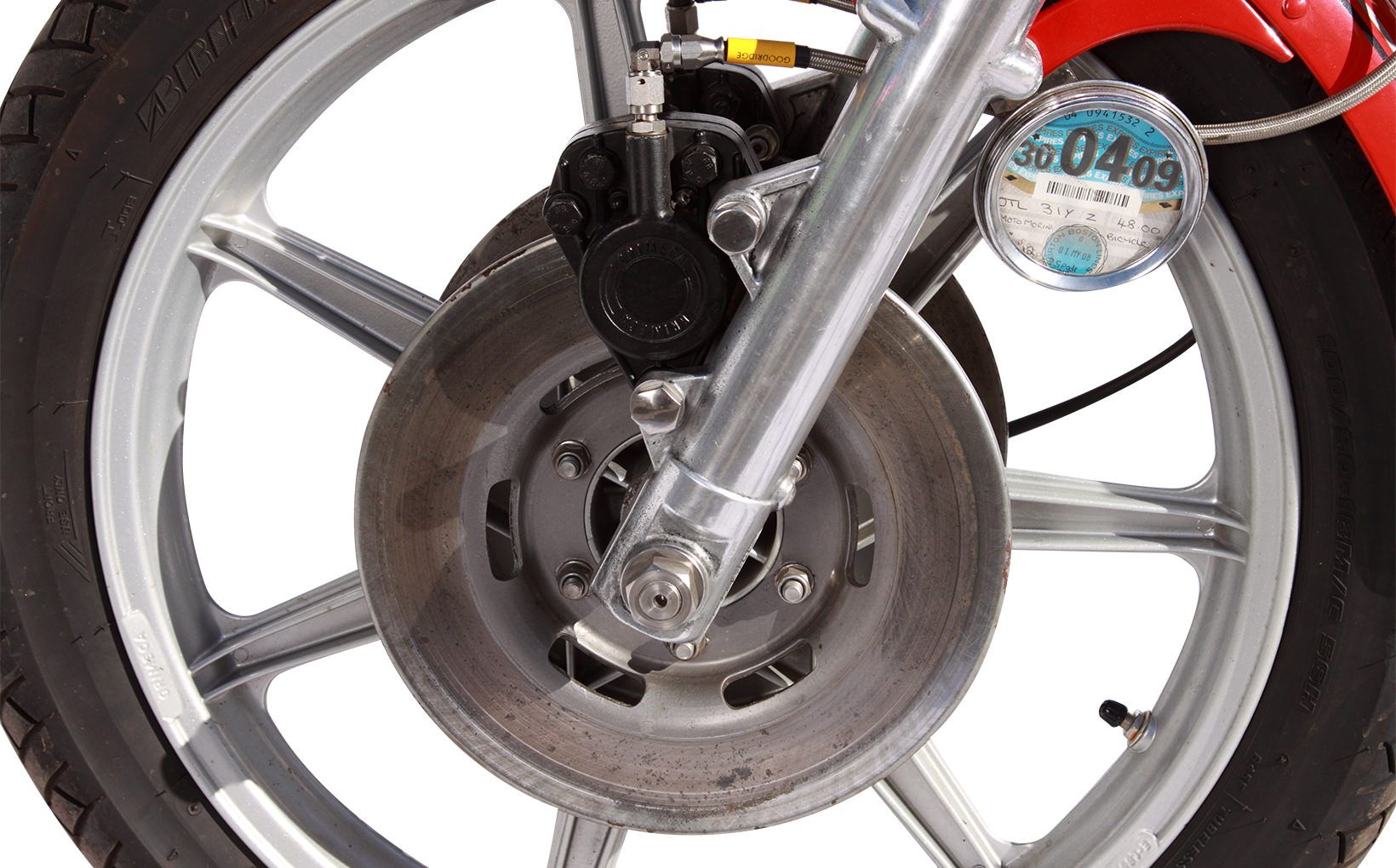 Grimeca front brakes were high spec in the day. 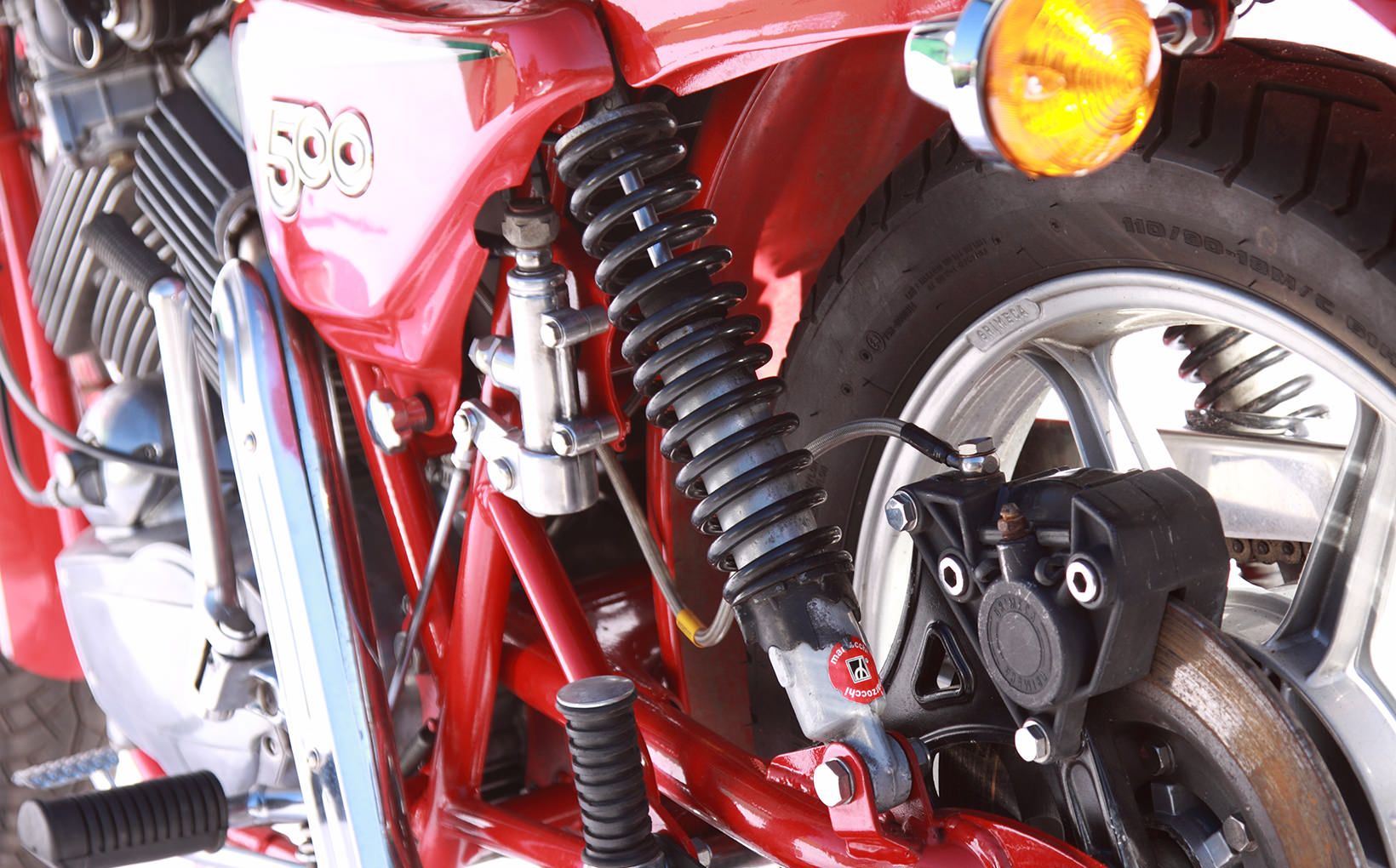 The bike had the sound and feel of a true Italian sportsbike. But it wasn’t all good and did receive some bad press in its day. It suffered rust problems on the exhaust system and was a notoriously hard bike to start. 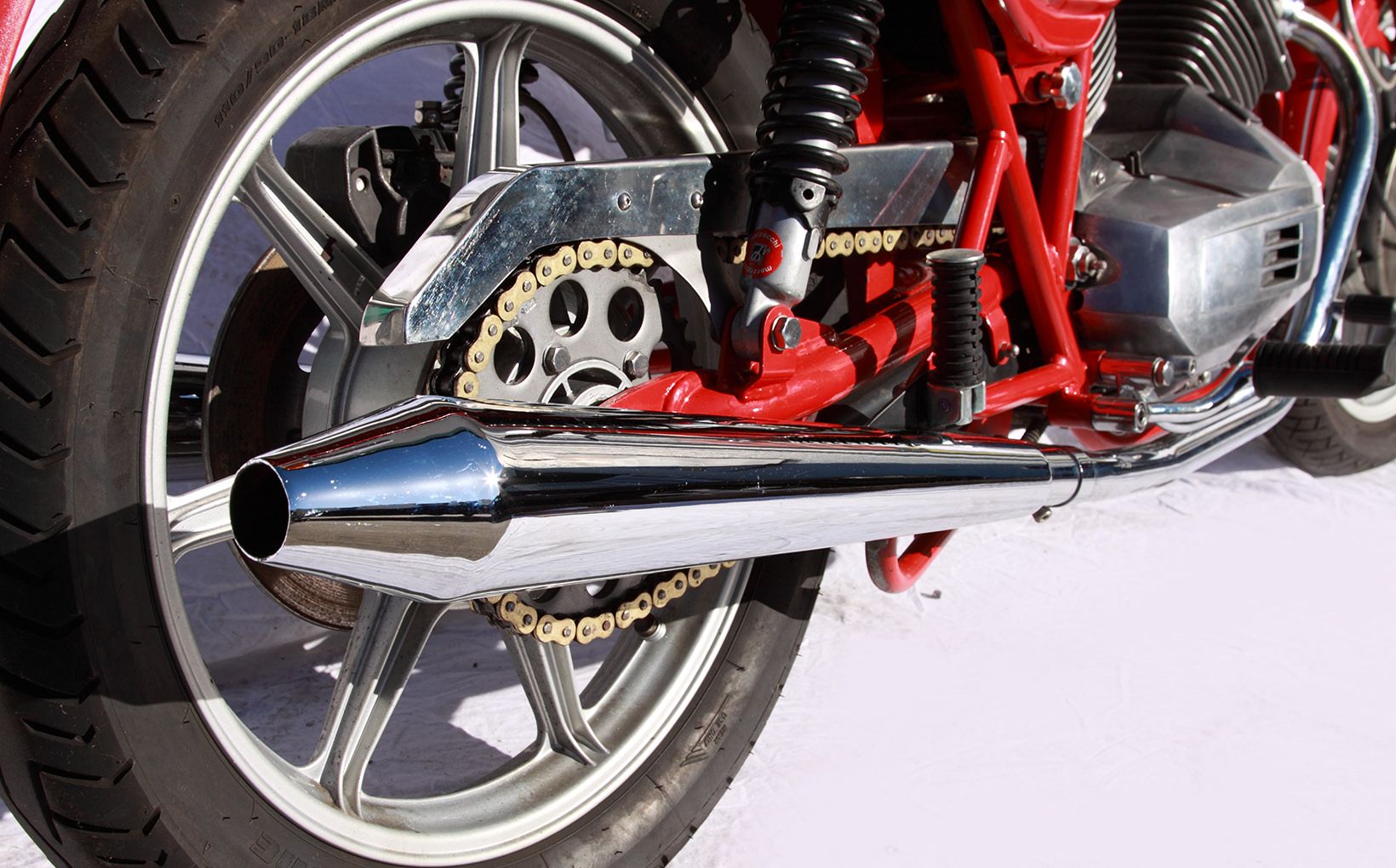 The chain and output shaft are on the right side as is the gearlever.

And the bike didn’t come standard with a mirror fitted!

But the one-down four-up right-hand gearshift won hearts of traditional Euro riders who were struggling to get used to the ‘Japanese’ style we all know today.

The ride was hard and sporty and the brakes, although good in dry conditions, were notoriously bad in the wet weather. 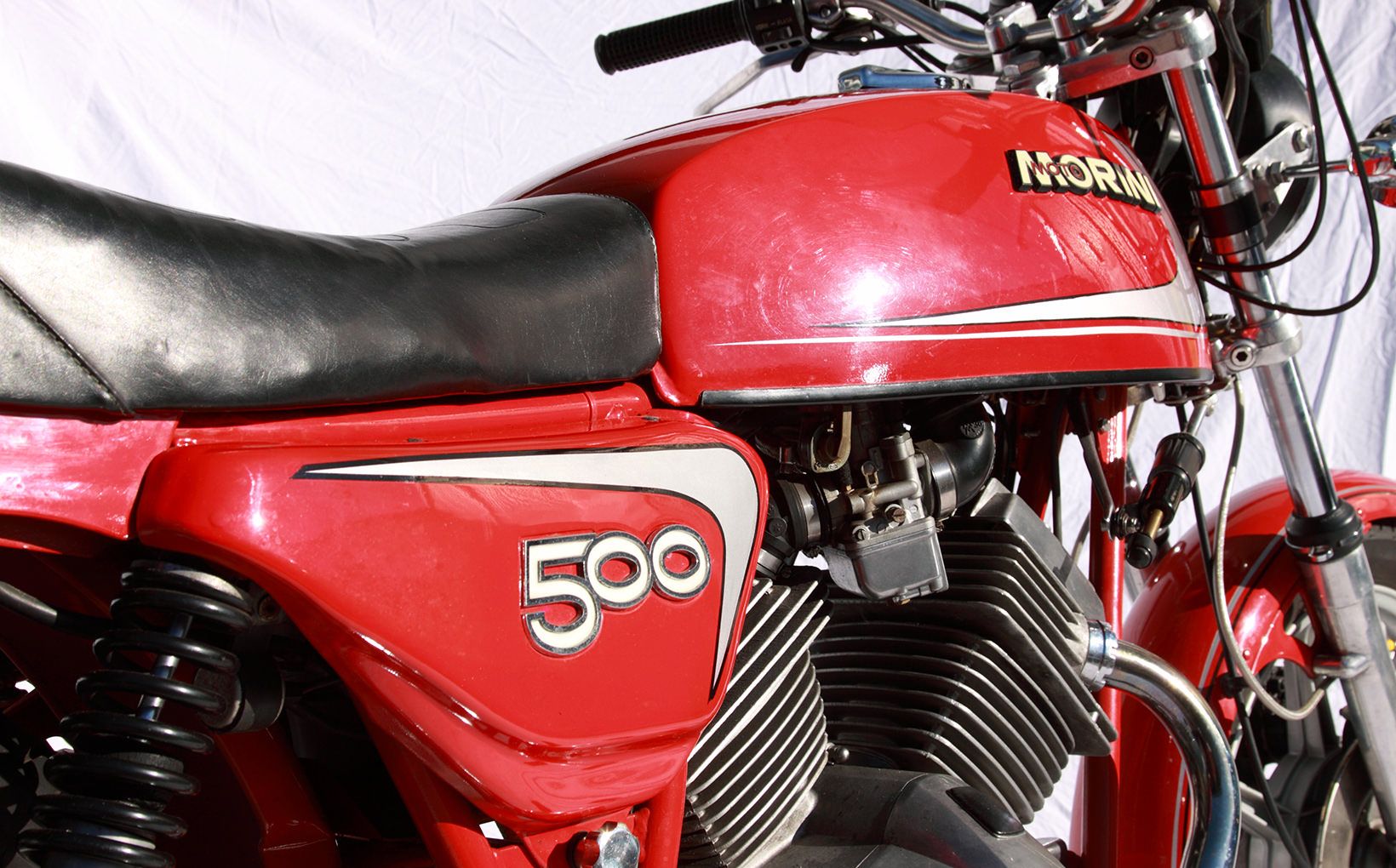 Incredibly stylish in a way only the Italians seem capable of designing.

However, that stunning V-twin engine was the big winner and placed the 100mp/h capable 500 up there with performance of bikes like the RD350LC, Moto Guzzi V50 and Honda CX500. 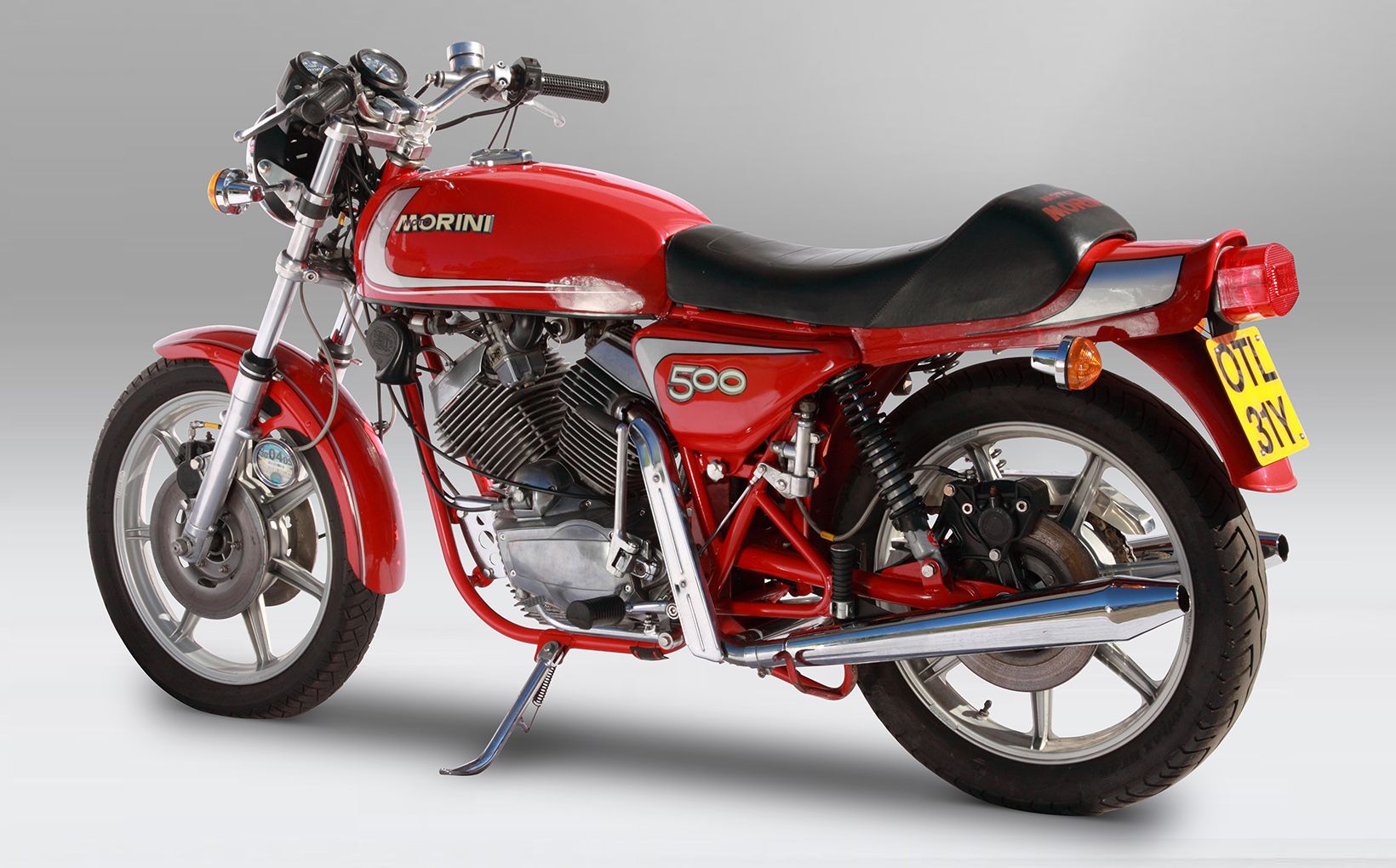 The 500 has a steel backbone frame.