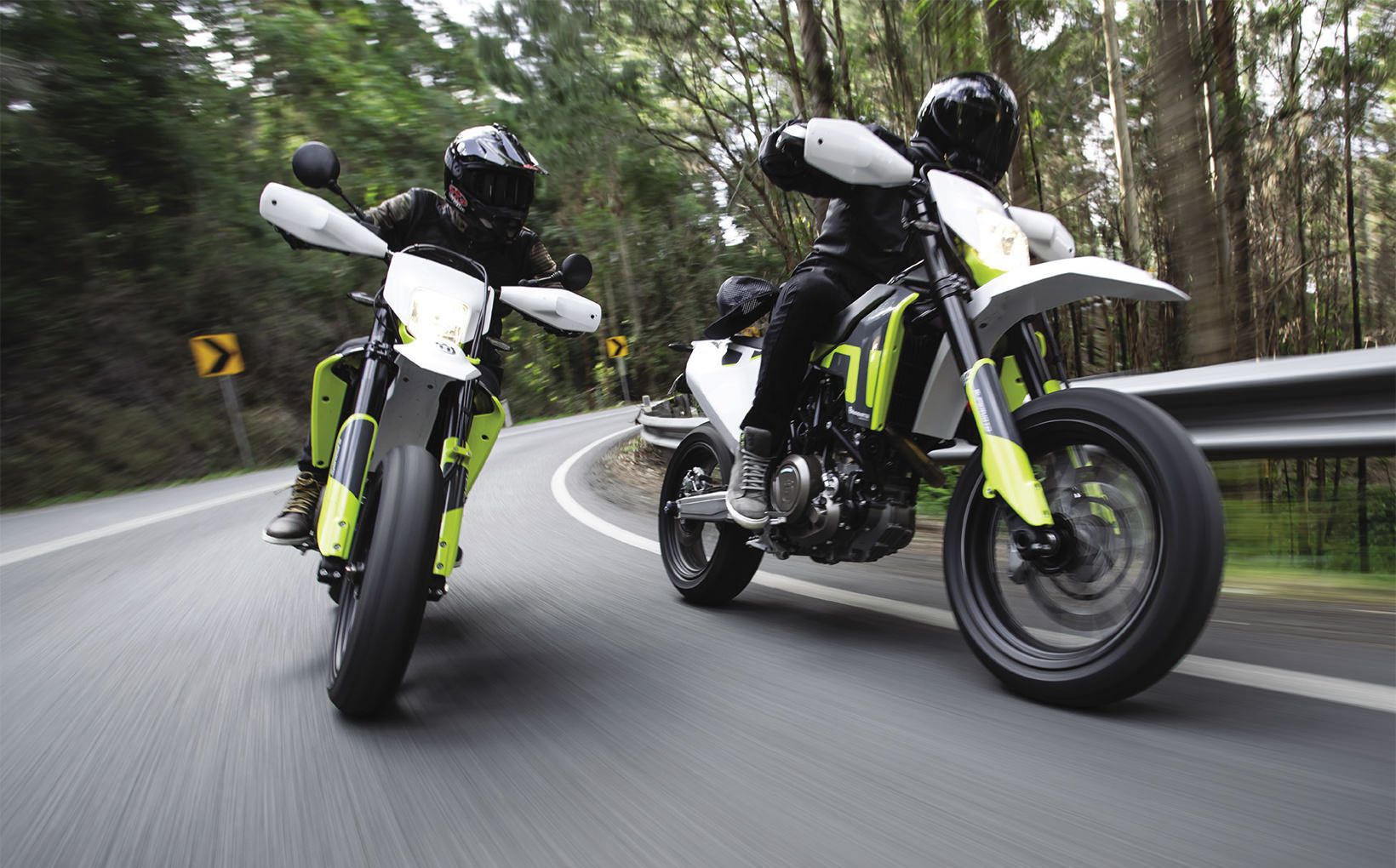 Riding a bike is such a privilege in Australia; we have some of the world’s best roads, both on and off the tarmac that can lead to all kinds of adventures many people only read about. The text read: ‘Husqvarna 701 Supermoto test with Todd Waters. You keen?’ Going for a burn around the Gold Coast hinterland with a motocross legend to find out what the 2020 model could do didn’t need much considering. 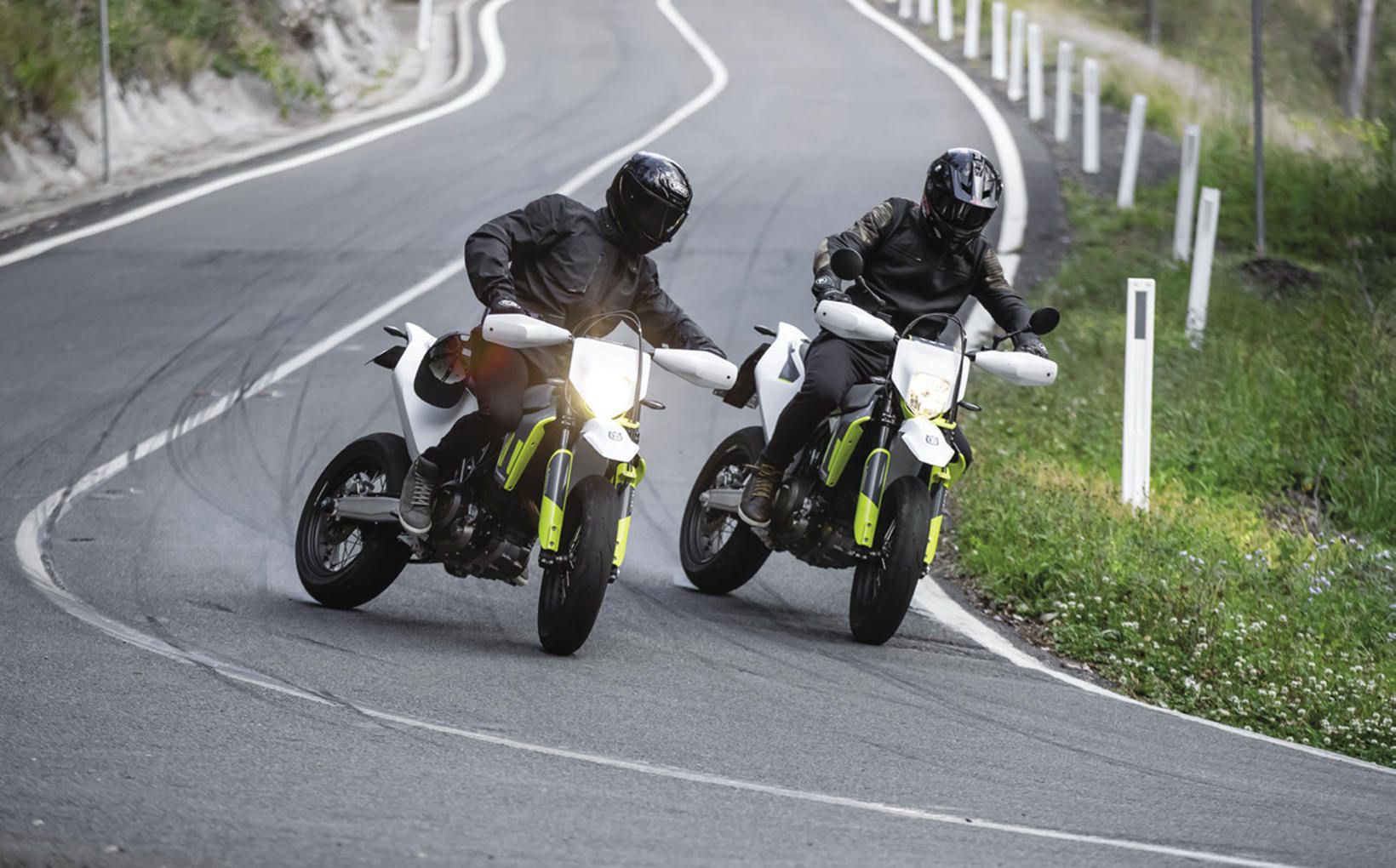 I had never met Todd, but his achievements and accolades are something only a few riders manage to accomplish in a career. With a pair of Husqvarna 701s at our disposal, going for a ride together on what are basically high powered motocrossers with road wheels is definitely a bucket list day out. To make it even more interesting our photographer, Matty McFerran, an ex-Nitro Circus freestyle rider, was there to capture it all and give us a little extra encouragement at every opportunity. I’m just glad we didn’t end up on the evening news. 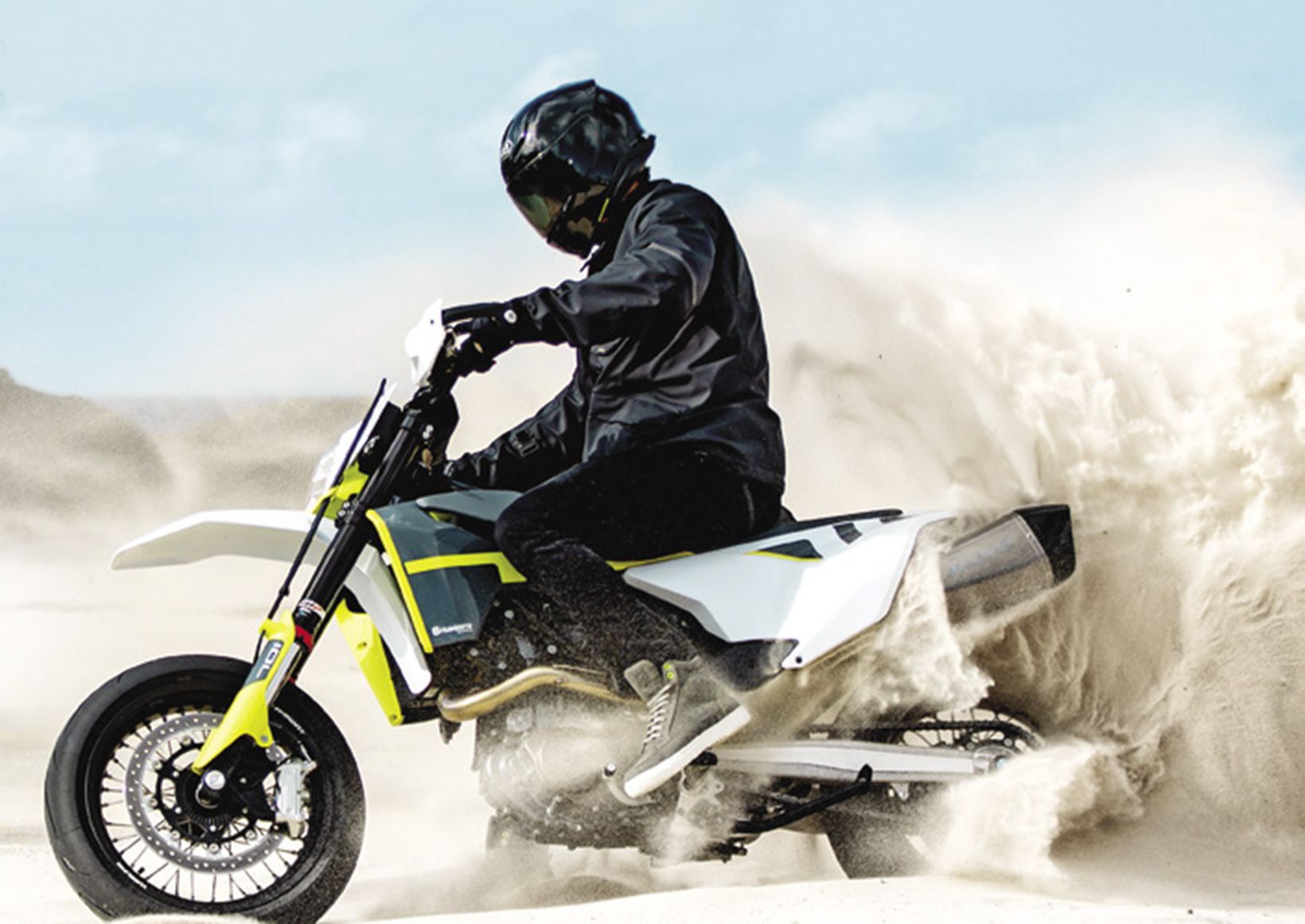 The Gold Coast hinterland is scattered with roads and mountain passes that have a healthy balance of fast and slow corners, elevation changes, smooth surfaces and plenty of bumps, which were undoubtedly tailor-made for the Husqvarna 701’s abilities. Big-bore singles have had a place among enthusiasts for donkey’s and while most of the examples were reserved for the hardcore riders that didn’t mind feeling every compression stroke rattling the teeth out of their fillings, the 701 was nothing like what you’d expect from a thumper this size. It’s silky smooth idle and refined engine note was the first give away of what was to come.

The aim of the game with this particular test was to find out just how capable the Husky is and how well it meets its intended purpose. We started the day by going for a ride to the beach to assess how well-adjusted the 701 is when commuting in traffic. One of the most notable features was how narrow and light the Husqvarna feels. Lane splitting is a no brainer and the weight distribution is equally as noticeable, which might seem like a small detail, but in reality, meant that it’s as easy to manoeuvre in tight places as a scooter. The 701 is intuitive and simple; there’s no getting used to it or working out how to ride it. It’s simply a ‘hop on and ride away’ machine because everything’s in the right place. 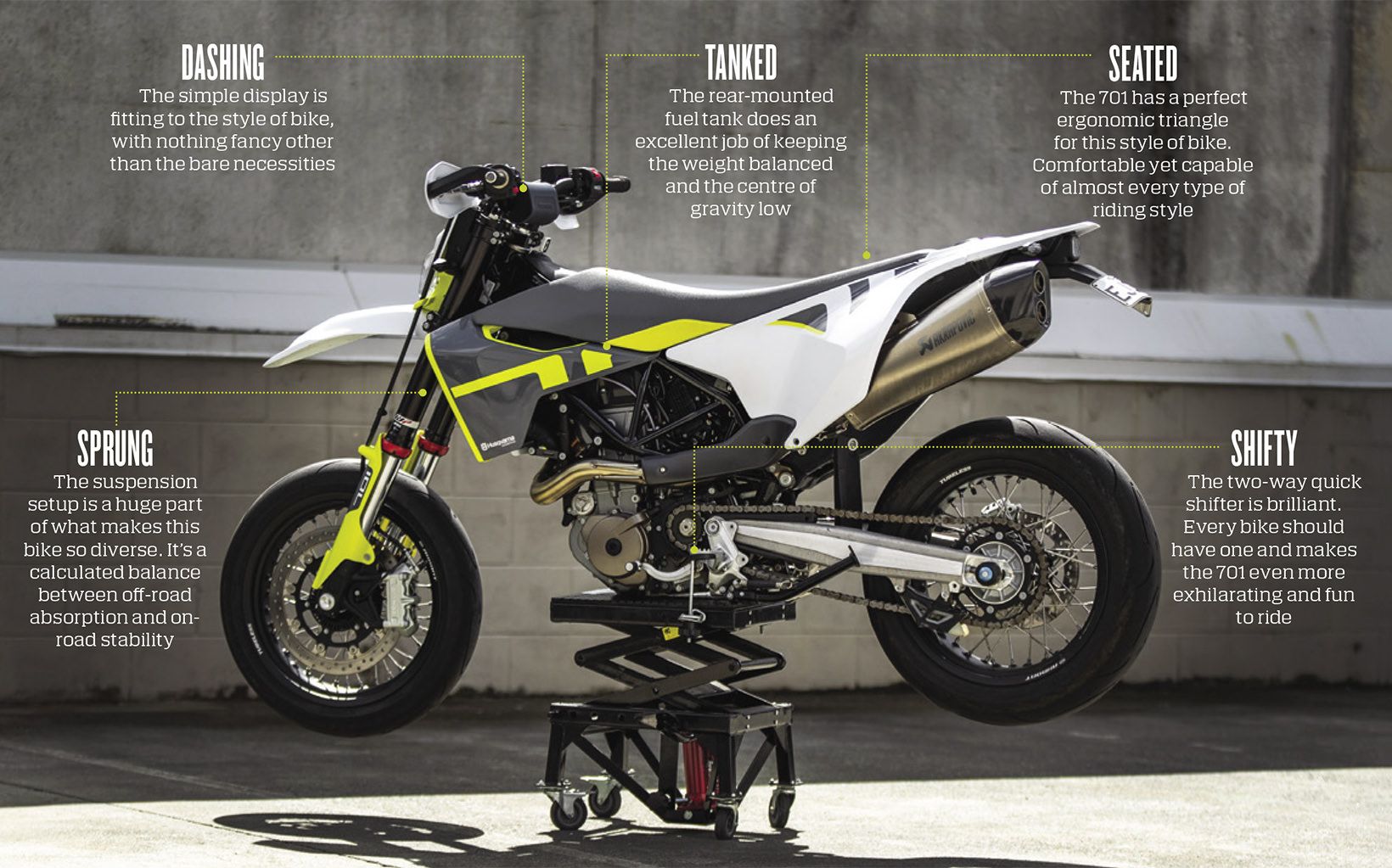 This bike has one leading and constant factor – it wants to wheelie. Everywhere. Let’s talk torque; it’s almost always in the rev range for a thumping power hit, making it a battle between self-control and just giving in to the fun factor which it scores top marks for. Adding fuel to the fire, pulling up at the first set of lights next to me was another 701 with Todd at the controls. What would you expect from a road racer and champion motocross rider aboard a 70+ horsepower road-legal supermoto? We lost count of the holeshot scorecard.

Supermoto is typically a combination of on- and off-road riding and the 701 is all about diversity, but in a simple way. It’s a strange area of the market where it isn’t an adventure bike nor is it a roadbike, but seeing Todd rail a sandy berm by the beach was seriously impressive and as the majority of my abilities lie in the road-going sector, it was an remarkable sight to see the 701 perform in the sand like a motocross bike, even shod with road tyres. 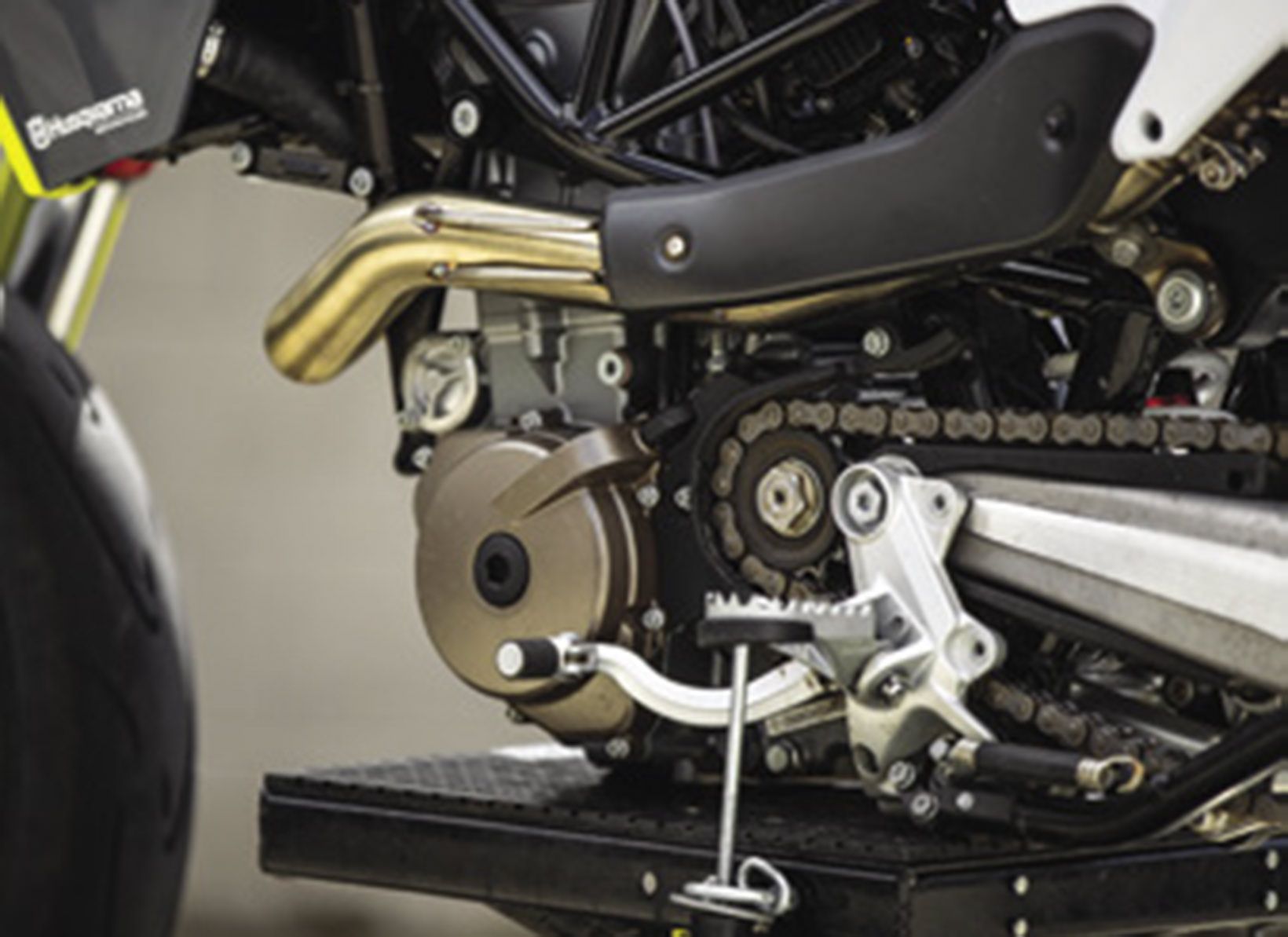 The KTM/Husky single sure looks the part 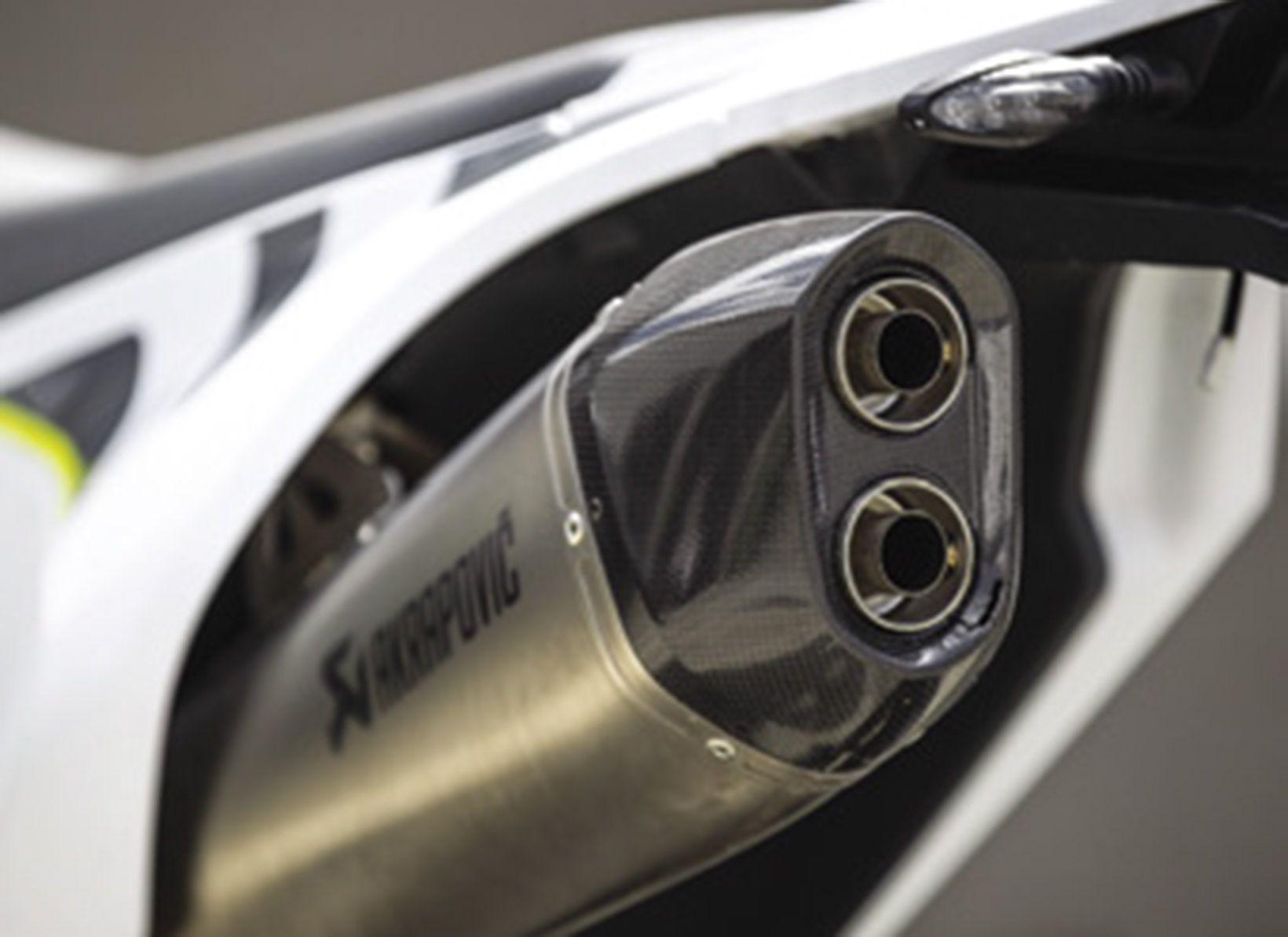 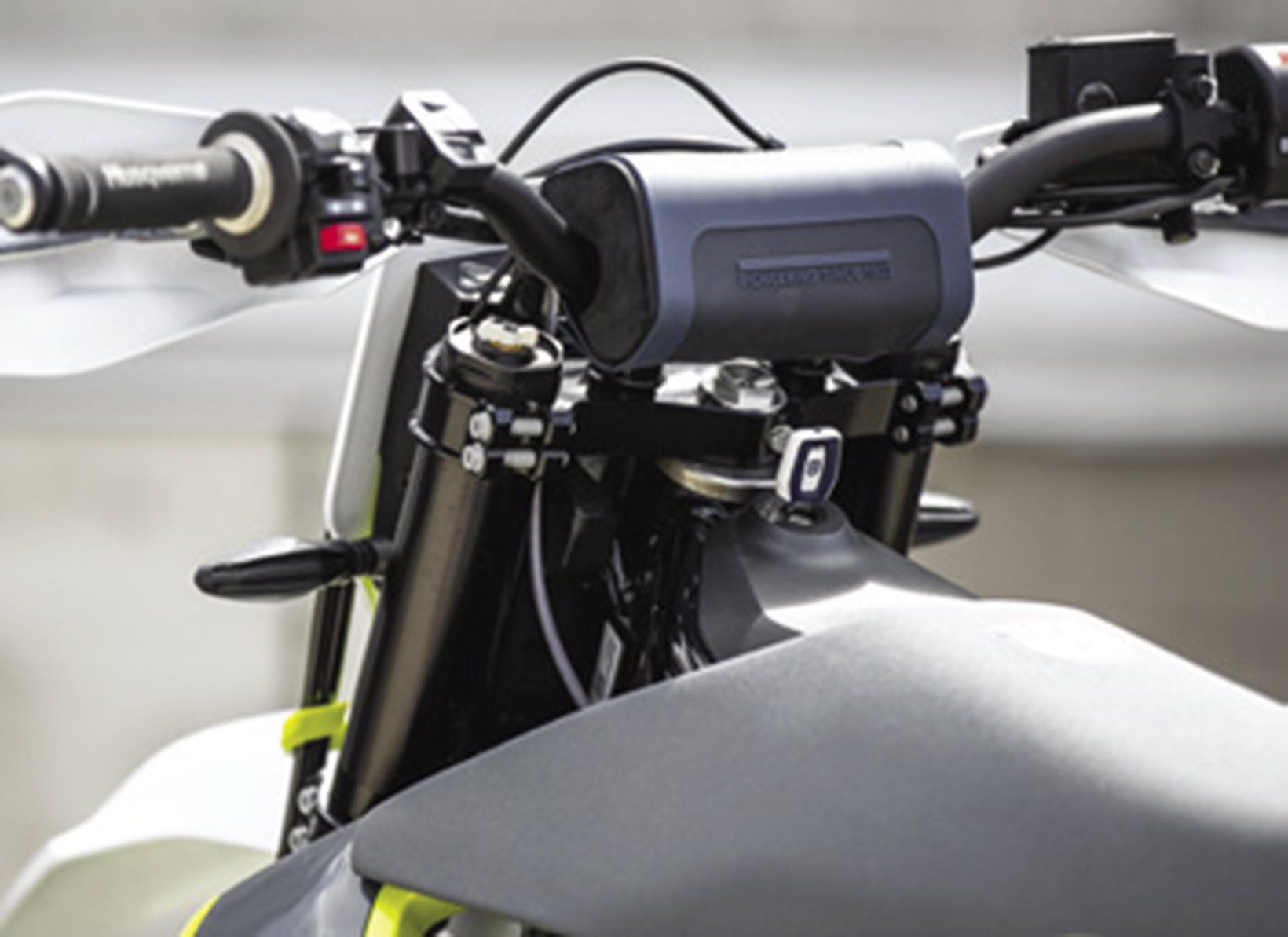 Hardcore dirt bike origins are a bit hard to disguise

The layers of this bike were unfolding, so we made a beeline to a private track to continue unravelling the possibilities. With some red hot tips from Todd we were jumping the doubles in no time. Riding this bike was just a case of just doing it and enjoying the moment. A lot of this is down to the ergonomics of the bike with a typical motocross-style seating position, plenty of ground clearance and a modest seat height – it delivers control and confidence for both short and tall riders.

The few pauses where we could take off our helmets and have a chat were also just as rewarding and it was a reminder of just how talented Australians typically are on the European and world stage, as well as right here in our own back yard. 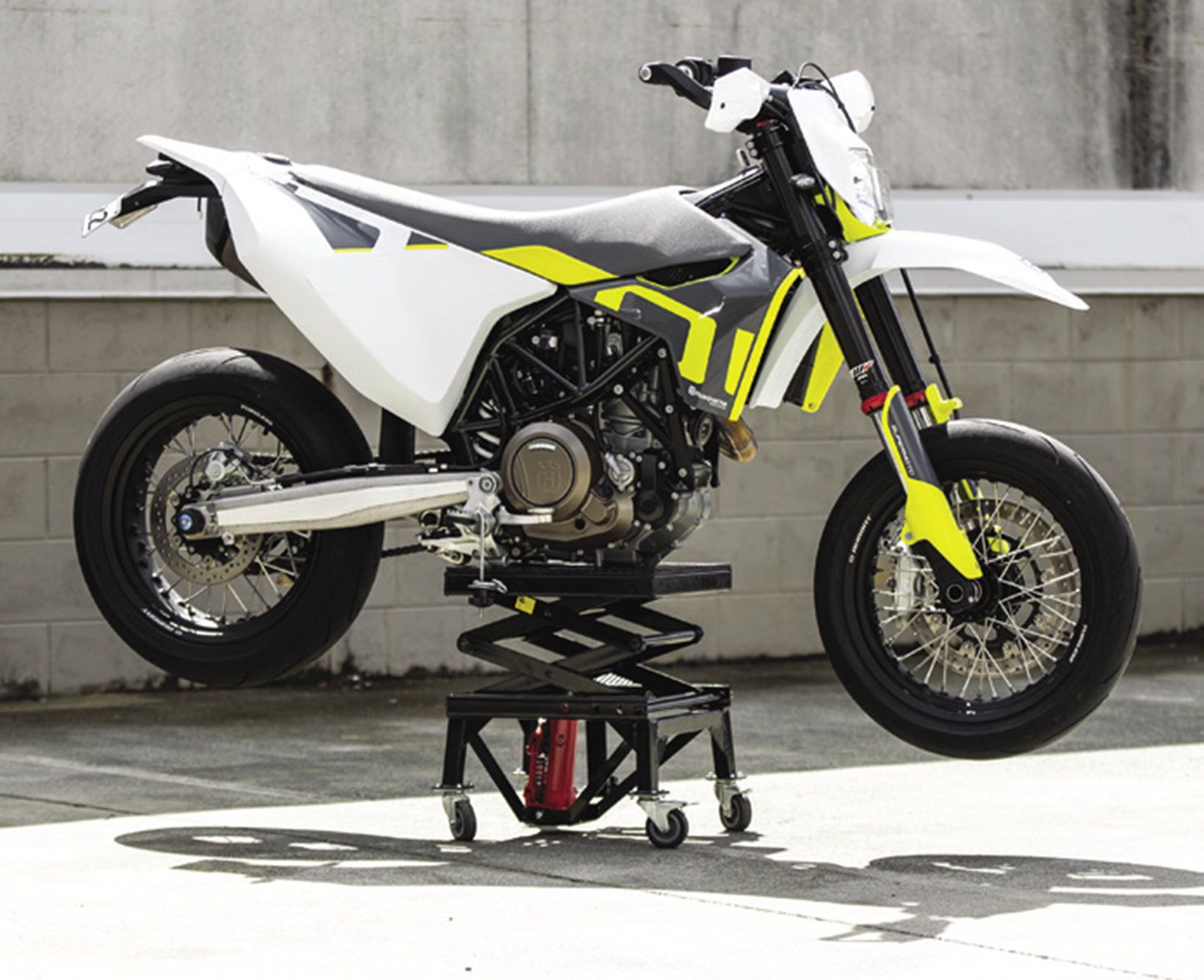 I have had the pleasure of meeting some incredible athletes over my career as a roadracer and witnessed firsthand just how skilled and courageous they are. Getting to know Todd throughout the ride was no exception and it was clear that we had similar experiences. His talents and determination as a rider have lead him to a point in his career where success was earned rather than stumbled upon. He is one of the most humble and down-to-earth champs I’ve met and an Aussie battler in every sense of the word. What I couldn’t believe, was that he had spent no time on the black top other than getting his bike license, so to repay the favour for the off-road skill injection, I began his roadracing 101 class.

To this point, the 701’s talents seemed to be endless. It had mastered commuting and ticked the off-road riding box. So with a strong start and sky-high confidence, we headed for the hills to test just how much it could deliver on the black top.

We decided to try out the Clagiraba short cut then up and over Tamborine Mountain and back down through Canungra – a typical loop for the weekend enthusiast. Rule number one of a well-rounded roadbike is feeling, especially from the front end. The 701’s weight balance and suspension setup, together with the evenly distributed seating position meant it had truckloads of that all-important feedback from the road surface and back up through the handlebars. It was capable of some incredible corner speeds and in no way lacked power.

It comes from the factory with two switchable maps, a sophisticated lean-angle sensitive traction control system that could be completely turned off as well as cornering ABS which can also be switched off. The system is simple, easily operated by a single finger and highly effective. It also has a two-way quickshifter, hallelujah! 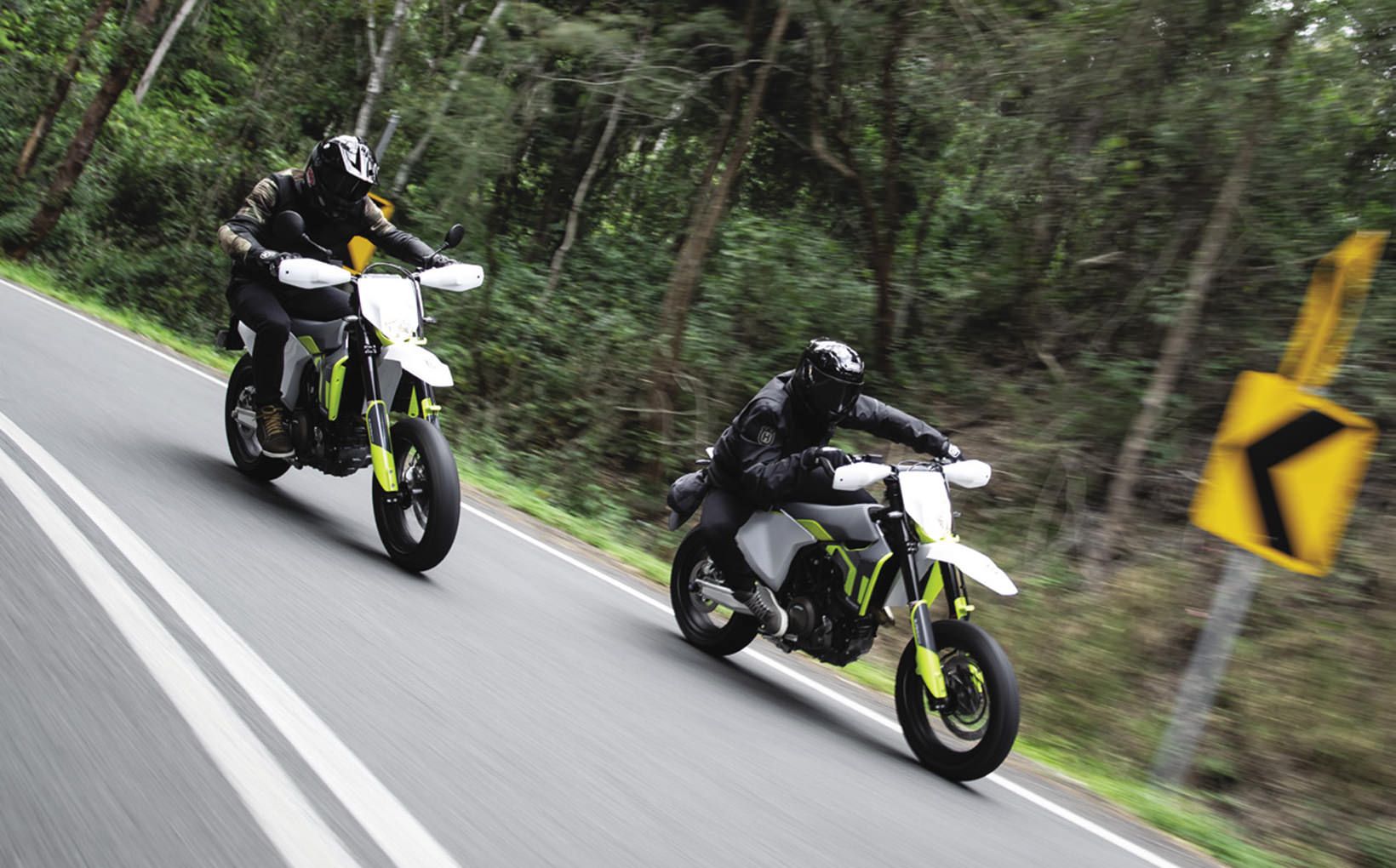 Riding the Husky with the TC off was no issue as the power delivery was so linear and smooth. It had no unexpected hits of raw thrust and the mapping was cleverly tuned. Big singles tend to be quite aggressive, especially in the lower revs, but the people at Husqvarna have tamed the lower end of the rev range by dialling in a slight delay with the first 10 or 20 percent of the throttle, which was great for confidence and didn’t subtract from the ride experience.

Another big plus is that trail braking with the front brake into the corner is an absolute breeze. Once again, the chassis and suspension setup were on point and no suspension adjustments needed – a very rarething for a couple of racers to be happy with. The 701’s cornering-ABS system was subtle and effective for constantly changing conditions and grip levels, too. 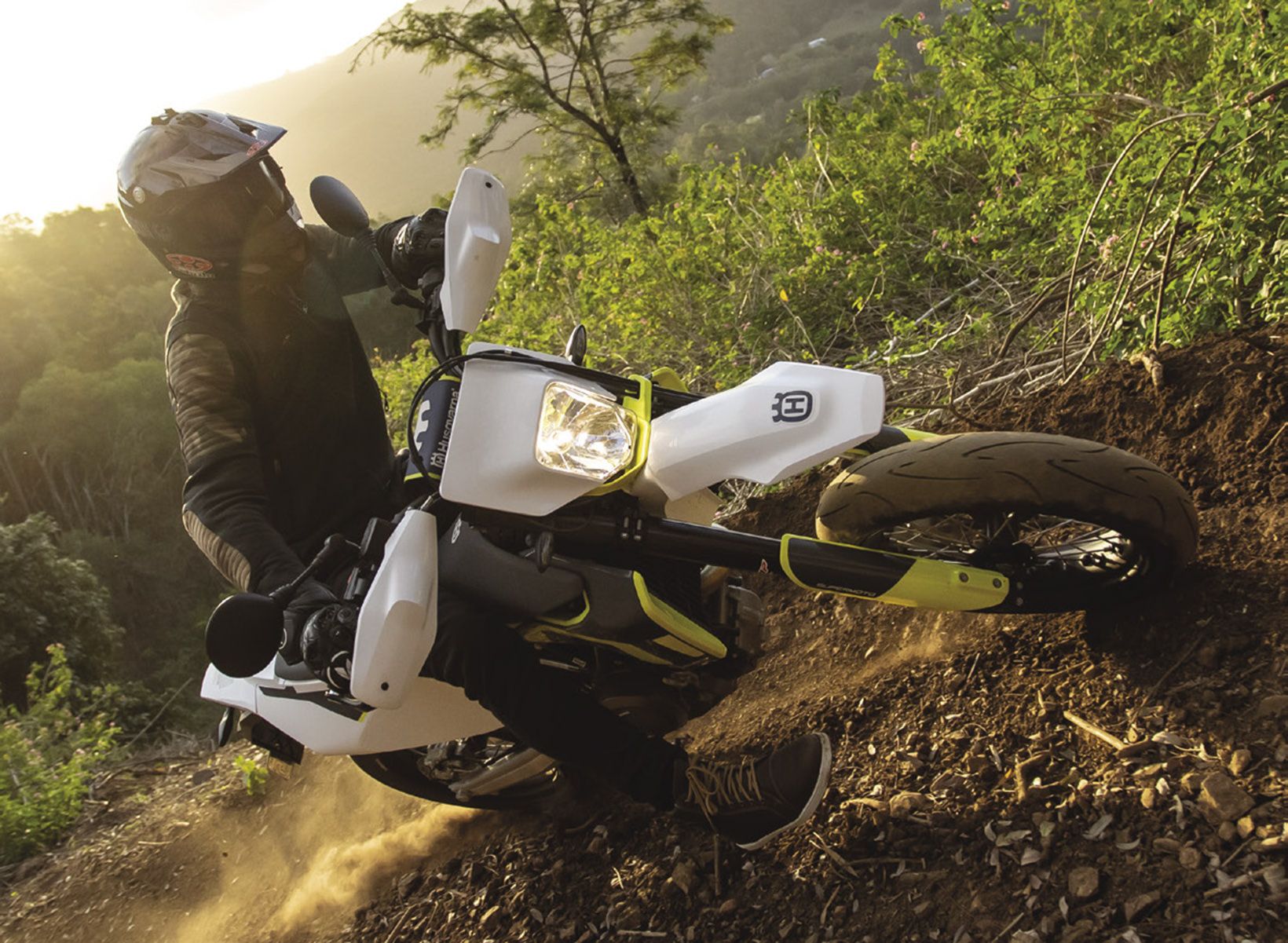 Todd took to the road like a duck to water – but lets face it, the guy has more skill in his big toe than most people acquire in a lifetime – it’s another testament to the refined nature of the bike and shows it has a big place in the all-rounders market. It’s the type of bike that anyone can jump on and ride as hard or relaxed as you like. Soon enough the pair of 701s were doing what Supermotos do best and the bottom line was that we were just having so much fun! Sliding into turns, wheelies, stoppies and jumps.

After getting away with the lot and the sun setting on the horizon, it was time to cruise home which involved a little highway ride as well; the final piece of the puzzle in what was already a bulletproof package. The 701 has quite tall gearing, a long first gear and quite a close-ratio gearbox. But with plenty of power to push it along, it really doesn’t feel like you’re riding a big single cylinder. The only time it seems to get lumpy is when you don’t keep the revs up. This highlights once again just how polished and balanced the single-cam, super-compact engine is. Every bike has an Achilles heel and the 701’s is, expectedly, highway use. But no one is buying a supermoto to cover big, dreary highway kays. It’s got no protection from the elements but the plus side of that is the gentle reminder that you’re approaching the highway speed limit when the wind tries to blow you off the back! 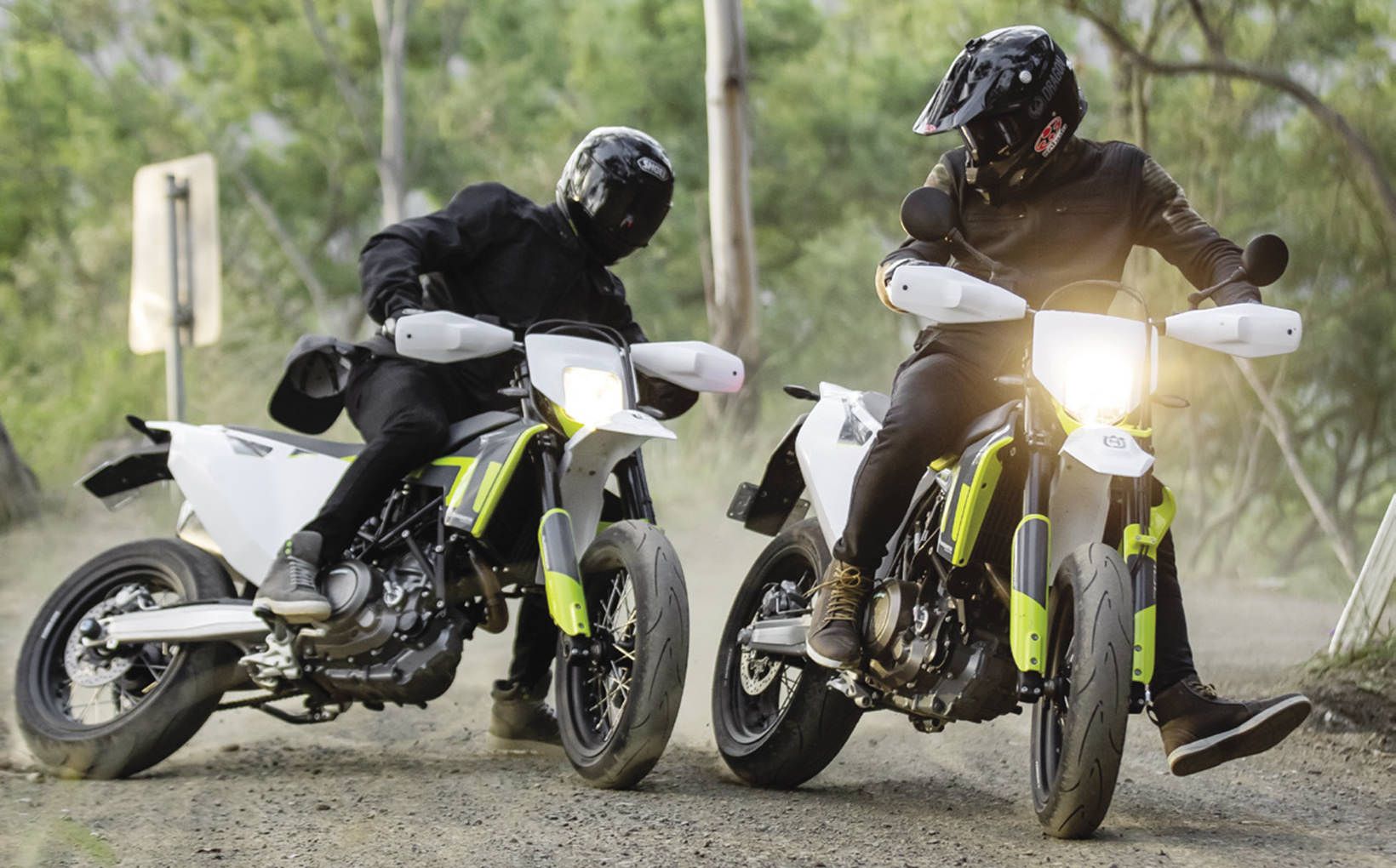 Back at the workshop and debriefing the day is one of my favourite parts of a day’s ride. It was silly grins all ’round and the 701 at the epicentre of the discussion. A couple of riders from completely different disciplines of racing going for a thrash. The Husky delivered and it will go down as one of the best rides I’ve had in years.

In these uncertain times, full of restrictions, sometimes getting out for a ride can be your only escape. Whether it’s riding to work or only for enjoyment, the 2020 Husqvarna 701 is all about having fun and enjoying the ride and with its impressive diversity, you can pretty much do anything you want on it.

It’s got a presence about it and if I had a dollar for every time we got a thumbs up from the general public as we rode past, I would have one sitting in my garage by now. The aggressive lines of the plastics, its modest yet striking colour scheme and the quality of the machined components all add to the aura that surrounds the 701. You can even customise it with a series of factory options such as side bags, heated grips, bash plate and a factory slip-on Akrapovic muffler. 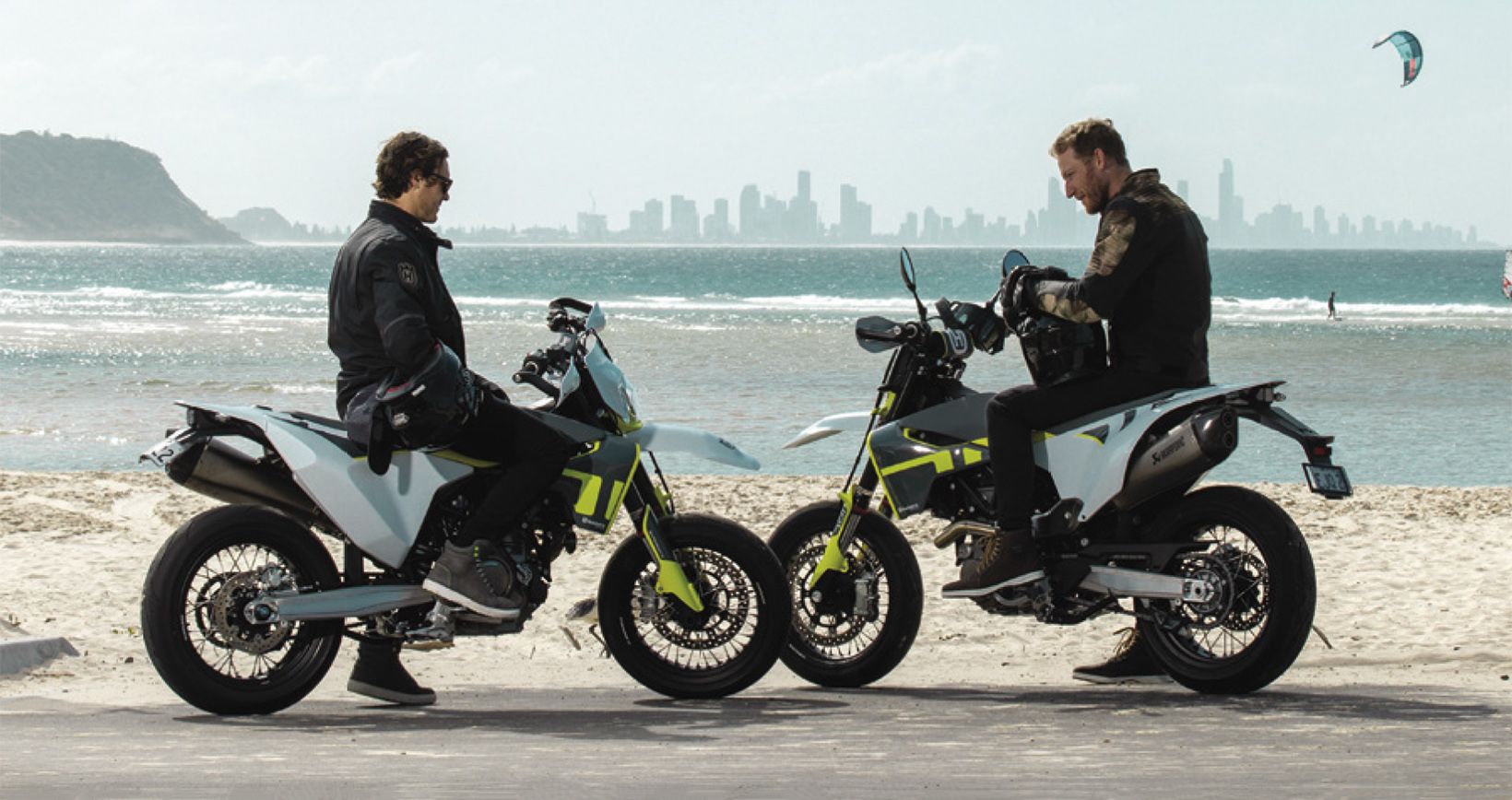 A street-legal supermoto is such a great concept and with the level of refinement it has straight from the factory, it’s undeniably one of the best lightweight roadies on the market. The price tag is also well adjusted and for $18,250 ride-away, you get a fair bit of bike for your cash – as long as tomfoolery is the name of your game. 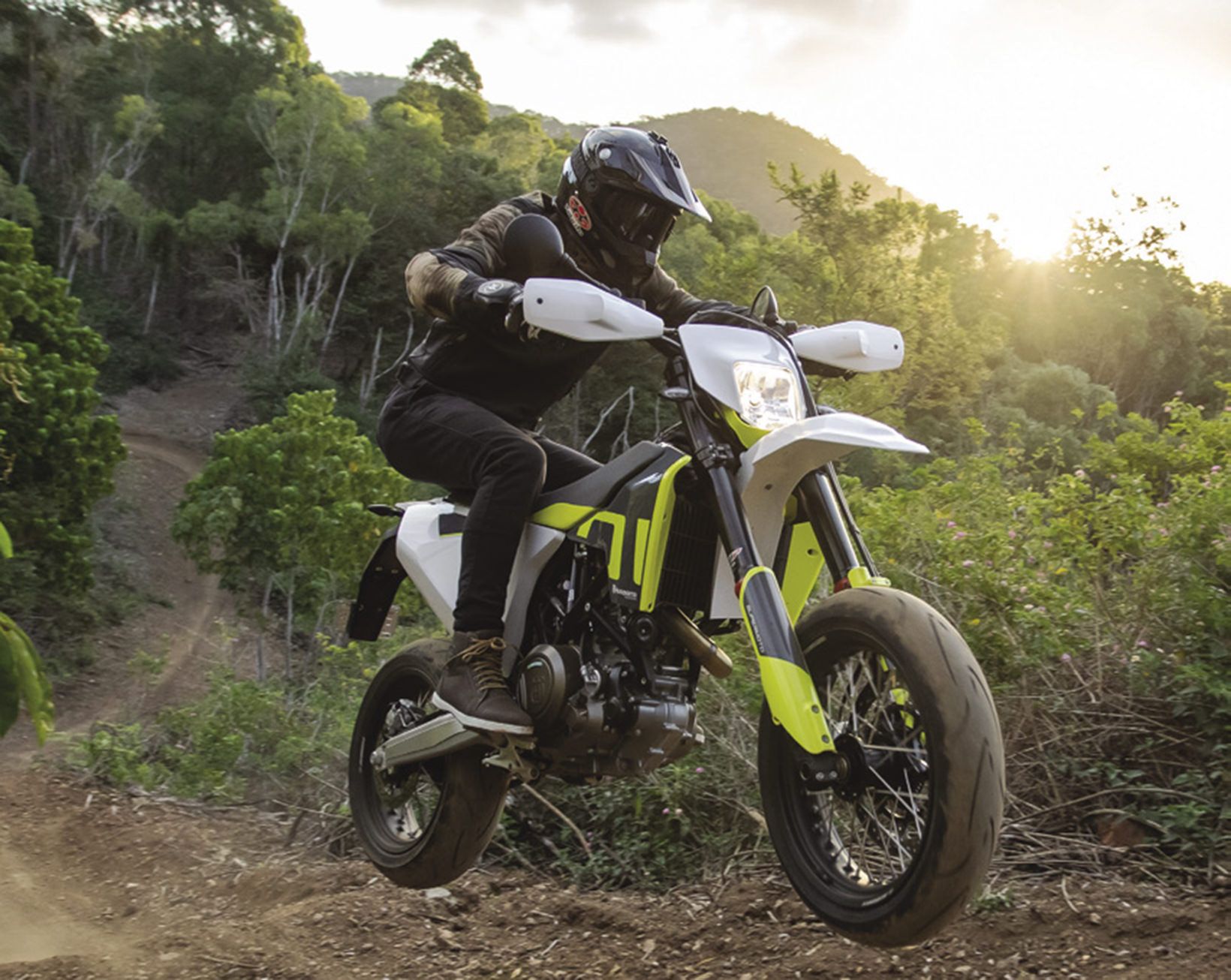 There is no single point that makes the 701 such a desirable package, ’cos it’s really just a big single jammed in a motocross frame, but it comes down to the precise engineering, tech and high level finishes that give it the wow factor.

The Husqvarna 701 is exceptional and the bare elements of a real riding machine. Try one.