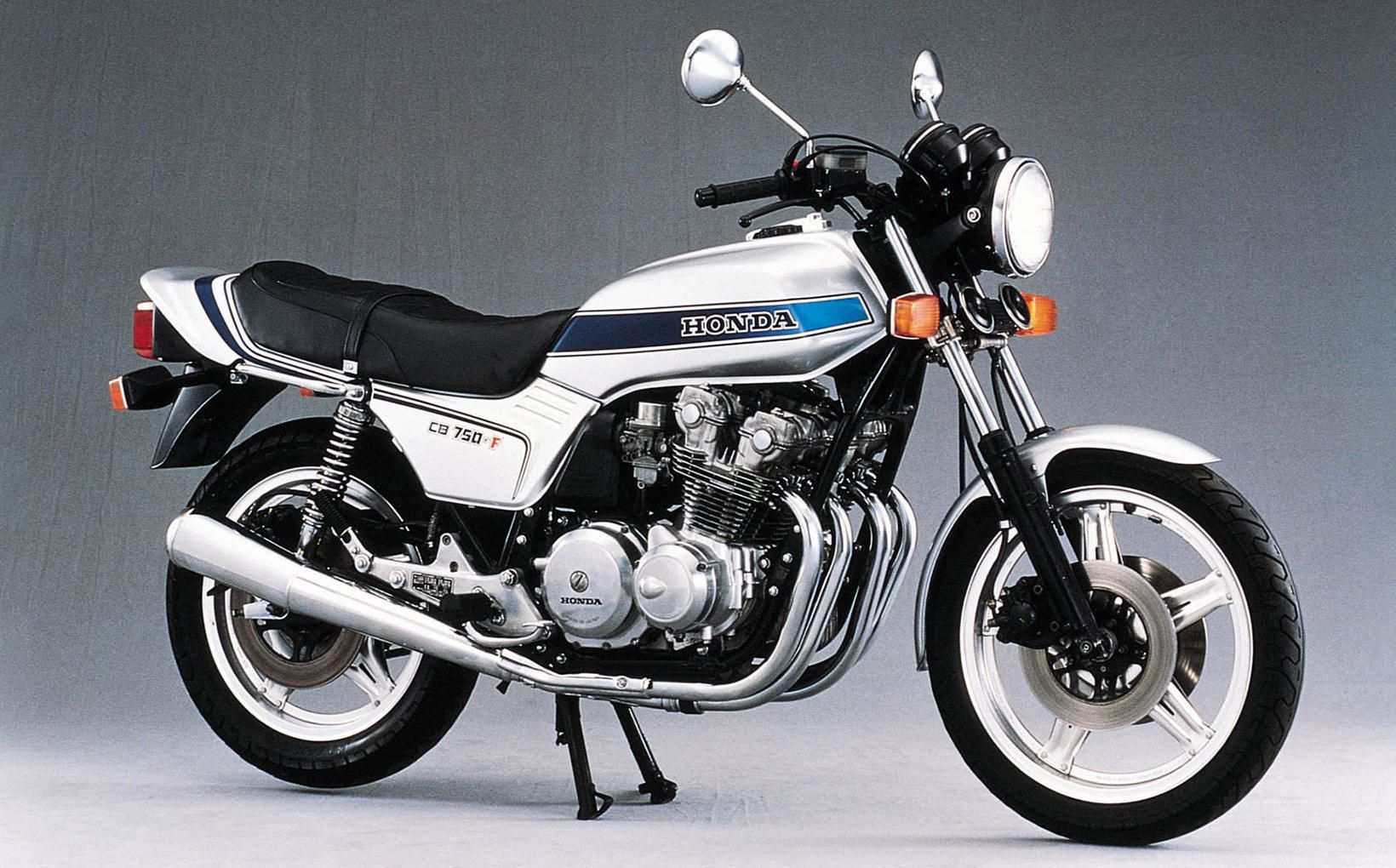 In 1979 Honda released the CB750F Bol d’Or, an all-new motorcycle that came to be widely known here as the ‘Roller Door’. This bike came with a 748cc four-cylinder engine that was topped by a cylinder-head with double-overhead cams with bucket and shims instead of rocker arms and four valves per cylinder, making 72 horsepower. 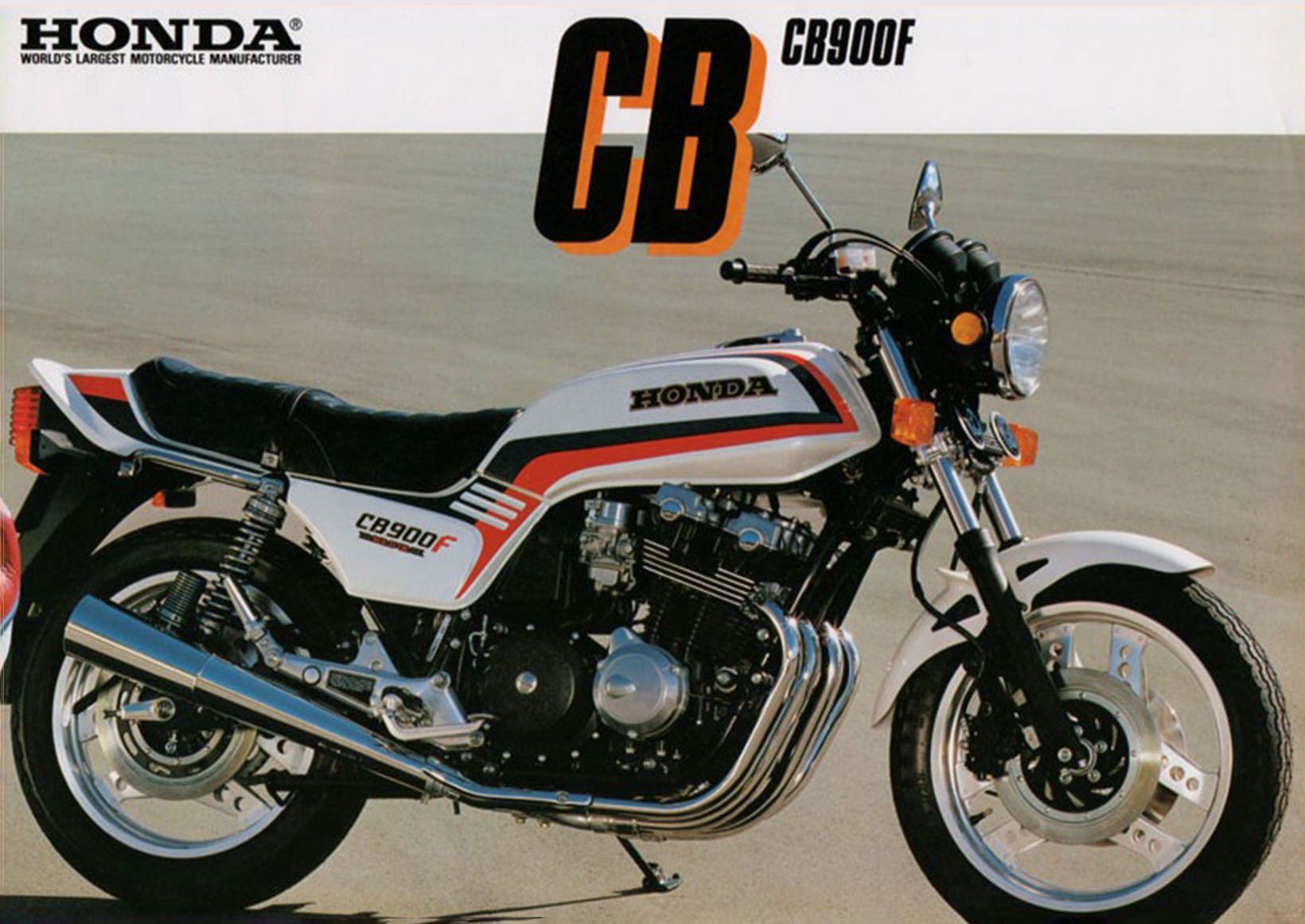 Looking awesome with a blacked out engine and white paint that we did not get here in our market.

In a marketplace that included Yamaha’s XS750, Kawasaki’s Z650 and Suzuki’s GS750, it was a definite trendsetter. Superior engine performance and handling made it stand out in the middleweight division. 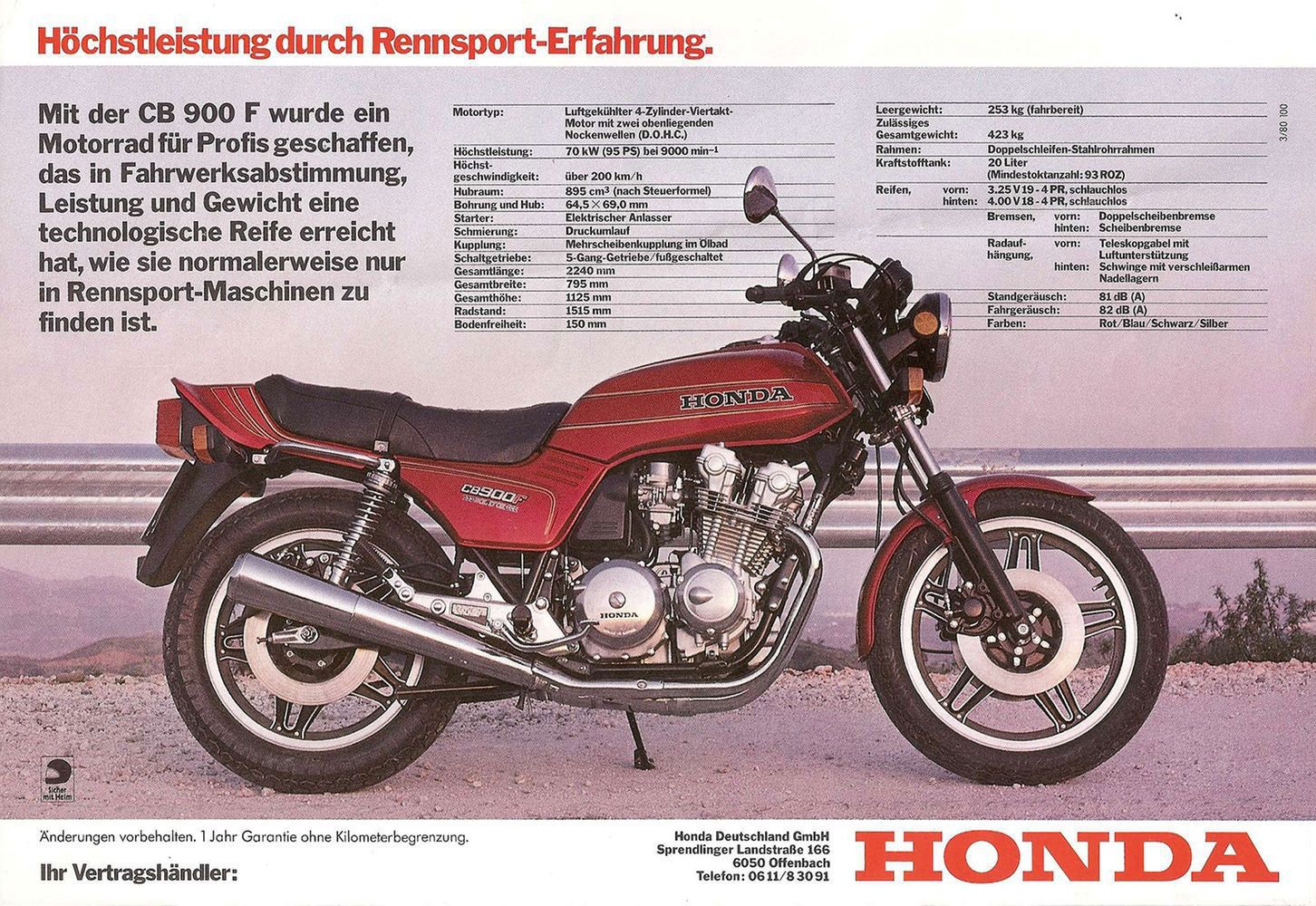 Some era German advertising of the all-new CB900F. 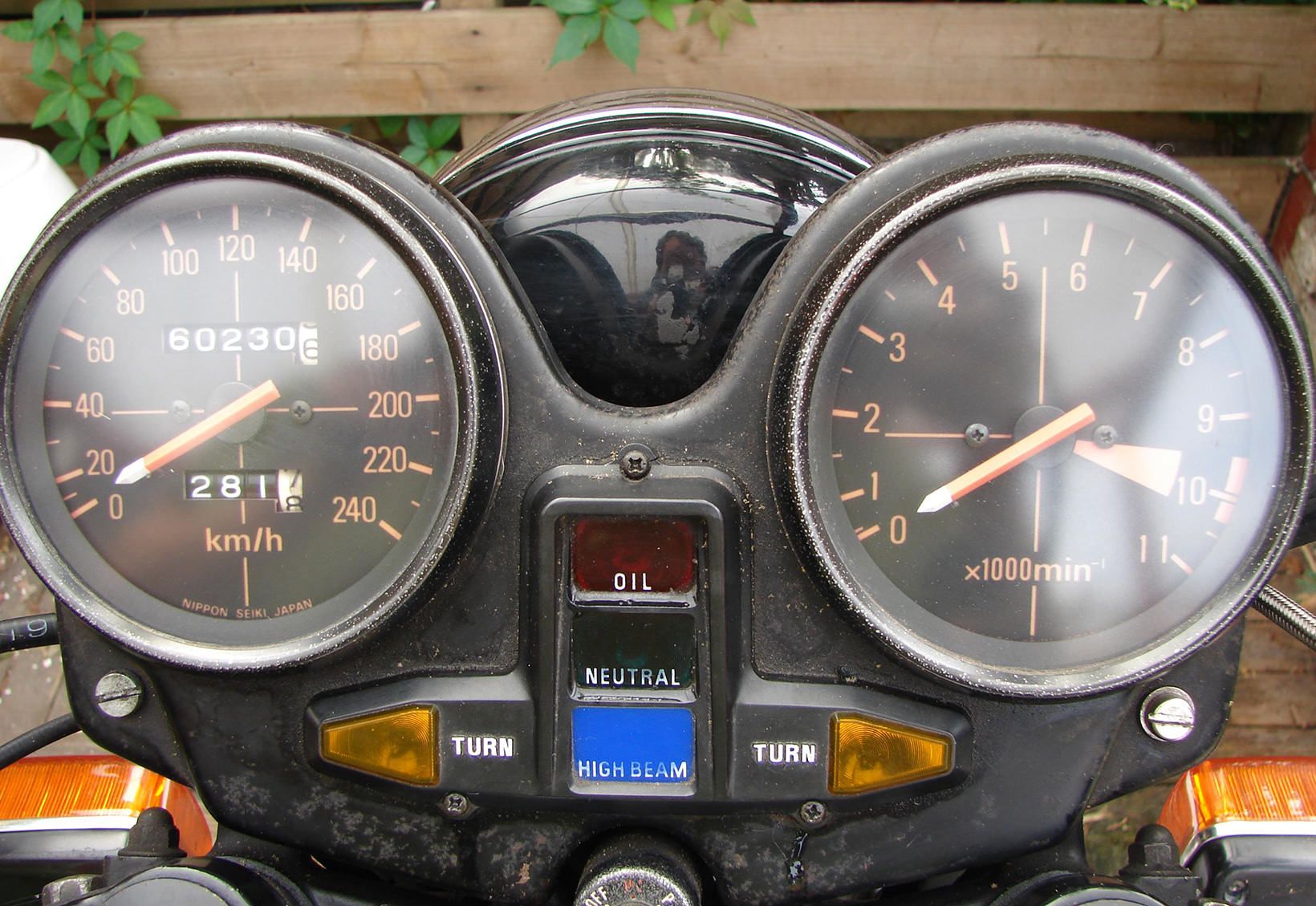 A 9500rpm redline and top speed over 200km/h was impressive at the time.

Although not released in America until 1981, the CB900F hit the Australian market simultaneously with the 750. Looking at the 1979 Castrol 6-Hour, Dennis Neill put his Honda CB900F on pole, the best result of the nine entered or seven that finished. 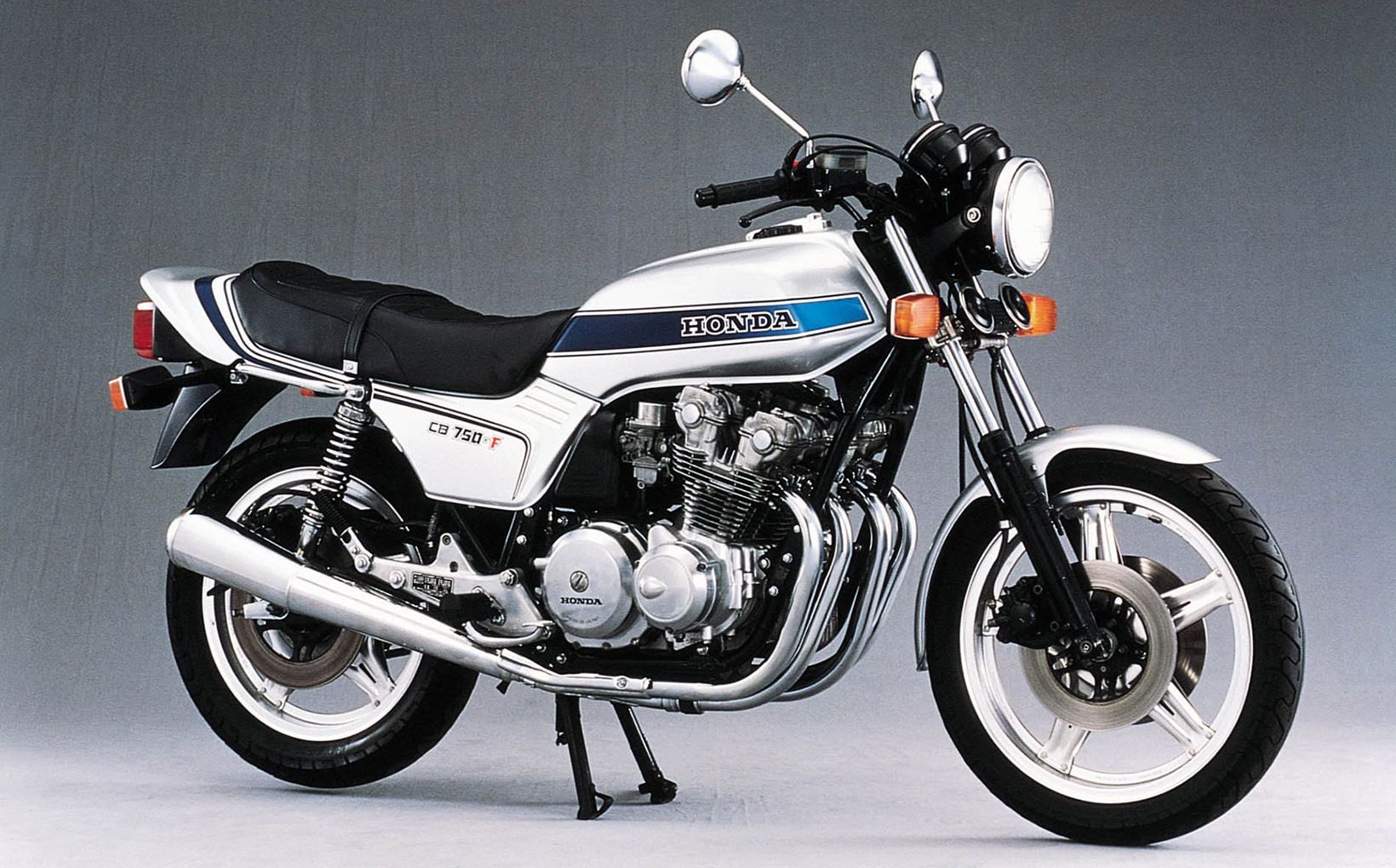 From side-on, there was a definite family resemblance with the six-cylinder CBX1000 but the front profile was much less imposing.

The CB900F had a slightly shorter wheelbase than the 750F, weighed 10 kilograms more but boasted a 902cc motor with 84 horsepower. The 900F also came with a larger diameter fork, adjustable dampening shocks, stiffer frame, as well as larger valves and carburettors. The CB900F also served as the basis for the Peter Molloy-built superbike ridden by Wayne Gardner. 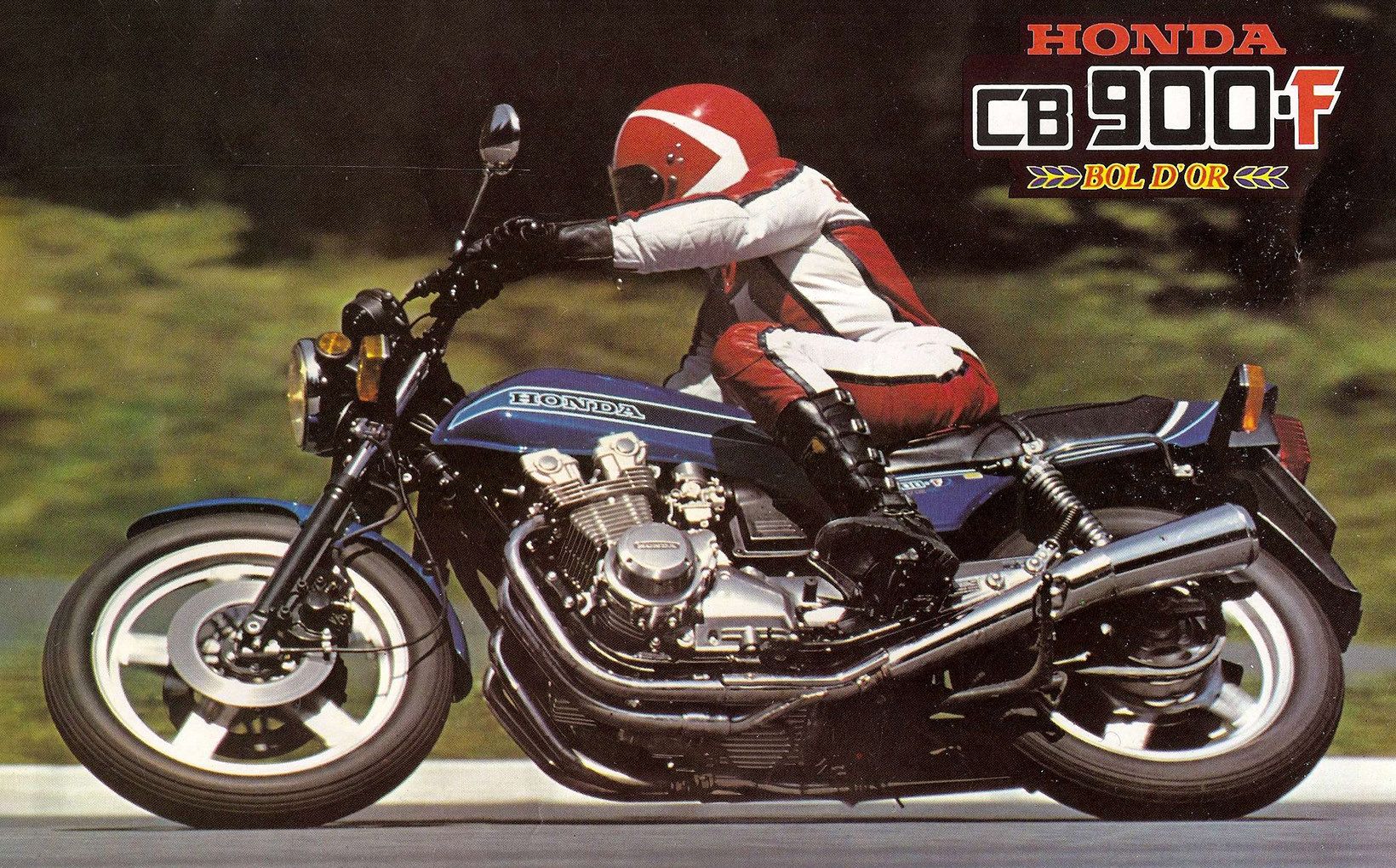 The 900 was an instant hit, with lots of power and pretty good handling. 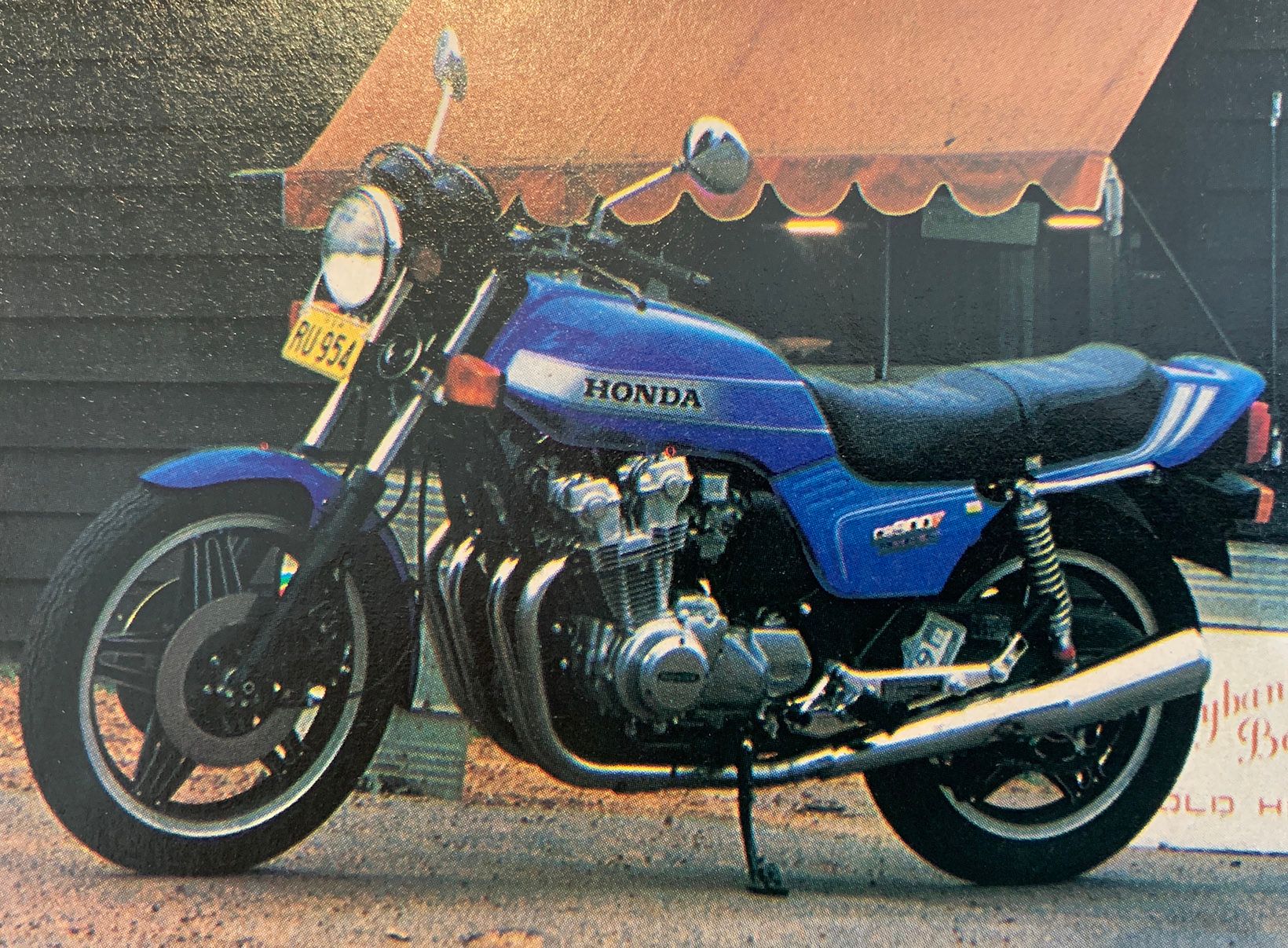 A stunning looking machine, even with a front numberplate!

By now, we’re talking about a bike that is at least 40-years-old and sadly, many Roller Doors have passed into history. With camshafts running directly in the aluminium of the cylinder-head, albeit with oil feed to each journal, infrequent oil and filter changes resulted in cams overheating and chewing out the aluminium. This has been one of the most common faults. 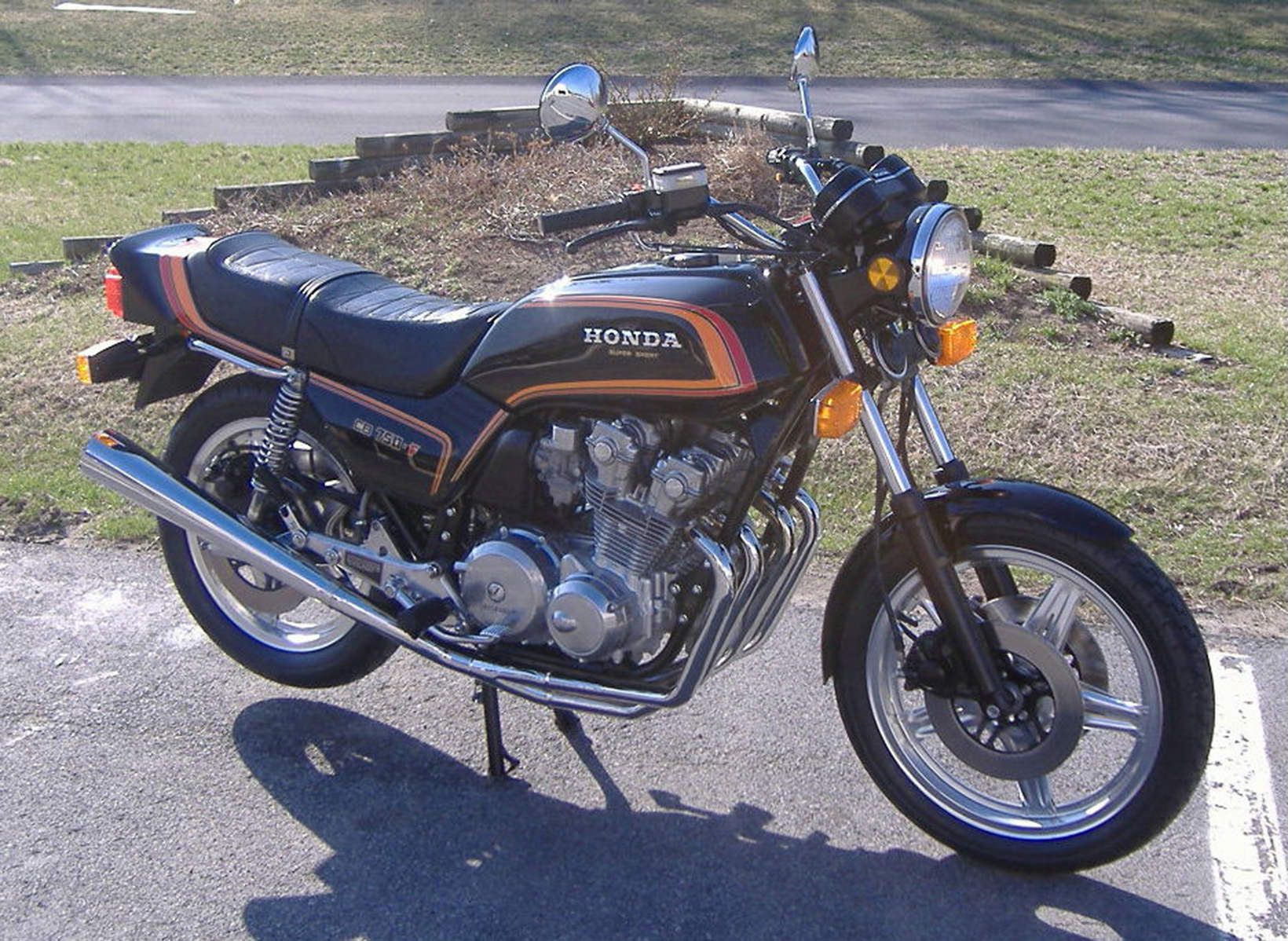 As a general rule the engines are reasonably strong and robust but the unusual dual-camchain arrangement with one chain running from the crank to the inlet camshaft and then a second chain running across to the exhaust camshaft can also be a problem if maintenance has been neglected.

Aftermarket pistons and other consumable engine parts such as valves are still readily available. Generally, the CV carburettors don’t wear excessively and offer plenty of tuning options. Flatslide carbs may offer more peak horsepower but according to the late Peter Molloy, the CVs offer a much smoother ride making them a better option for the street.

The CB900F and the F2, which had a massive and heavy top fairing on it but was a mega sports tourer. Two Wheels also did a dyno test on the CB900R.

Turning to the chassis, the front-end is fairly straightforward and bearings and seals are still readily available. Brake pads are easy to find but brake rotors may take a bit more work. Swingarm and wheels bearings are also in good supply. Honda fitted FVQ brand shock absorbers to the Roller Doors and they were soon nicknamed ‘Fade Very Quicklys’. If you’re planning to ride any Roller Door, spend up on a set of shocks. 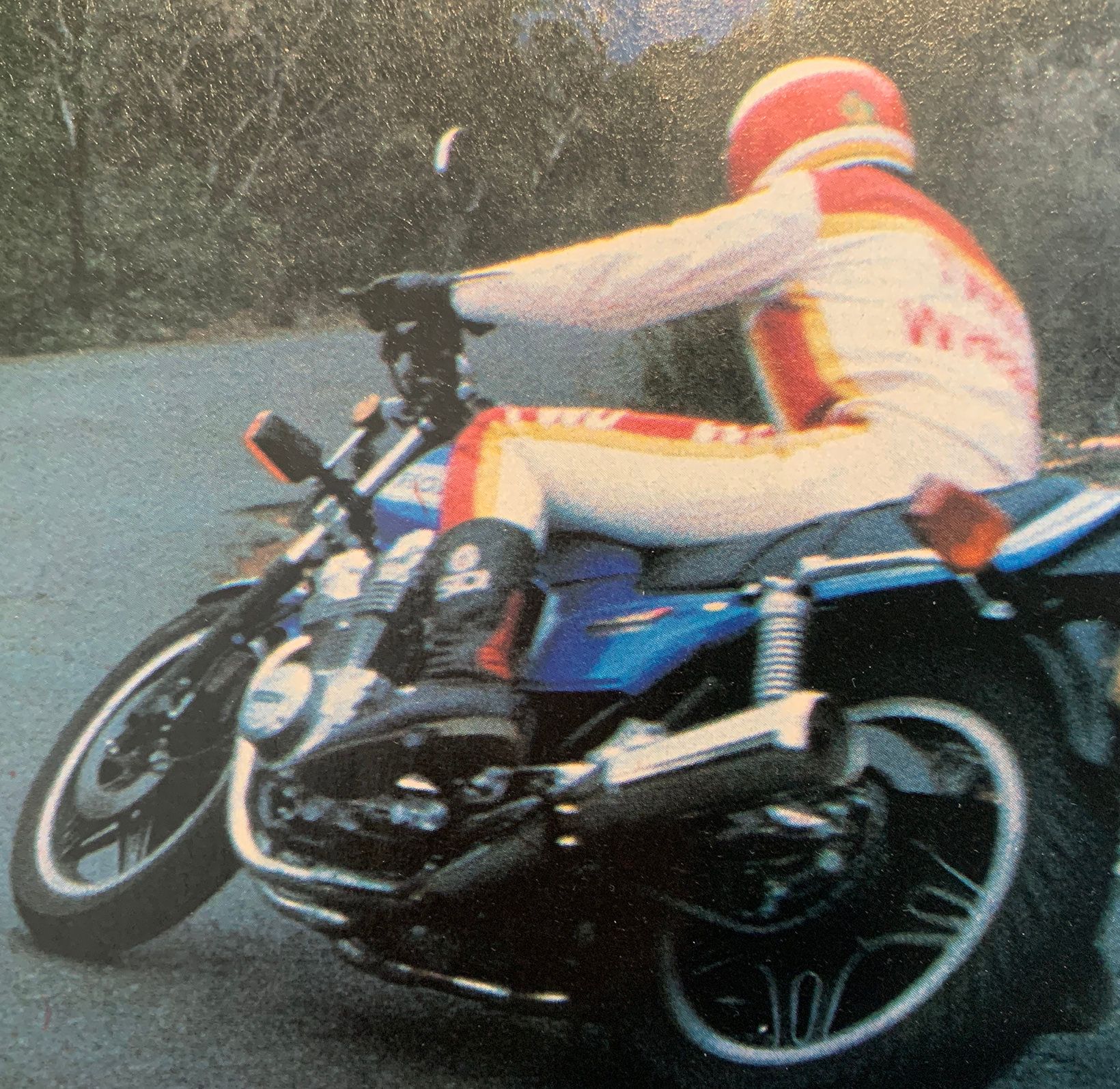 Two Wheels put the bike to the test in October 1980 and raved about it.

Don’t bother fitting larger tyres on the Honda Comstar wheels as the only thing you’ll achieve is a bike with restricted handling.

Overall, the CB750F and CB900F Bol d’Ors remain a good choice for those looking for a classic to ride. 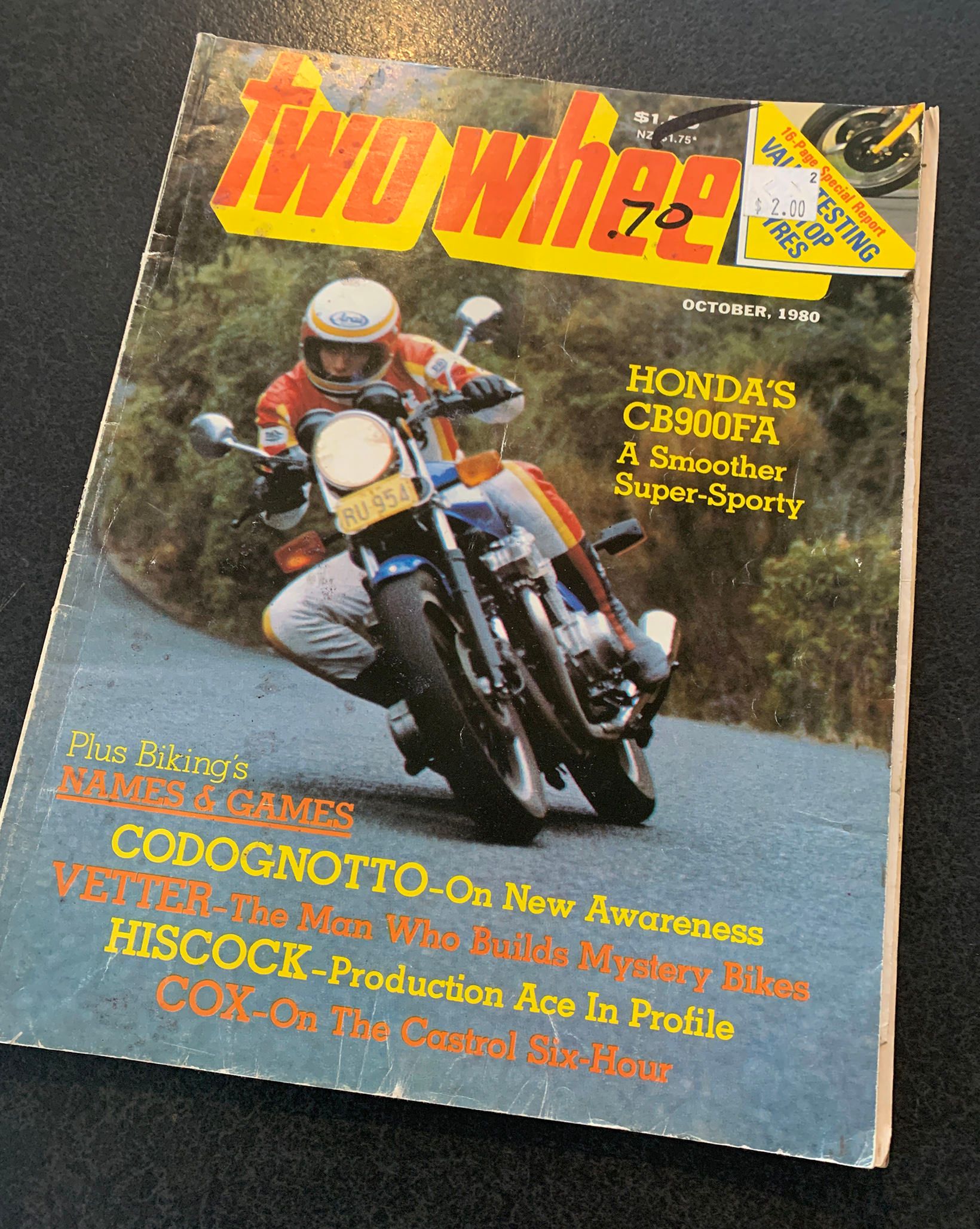