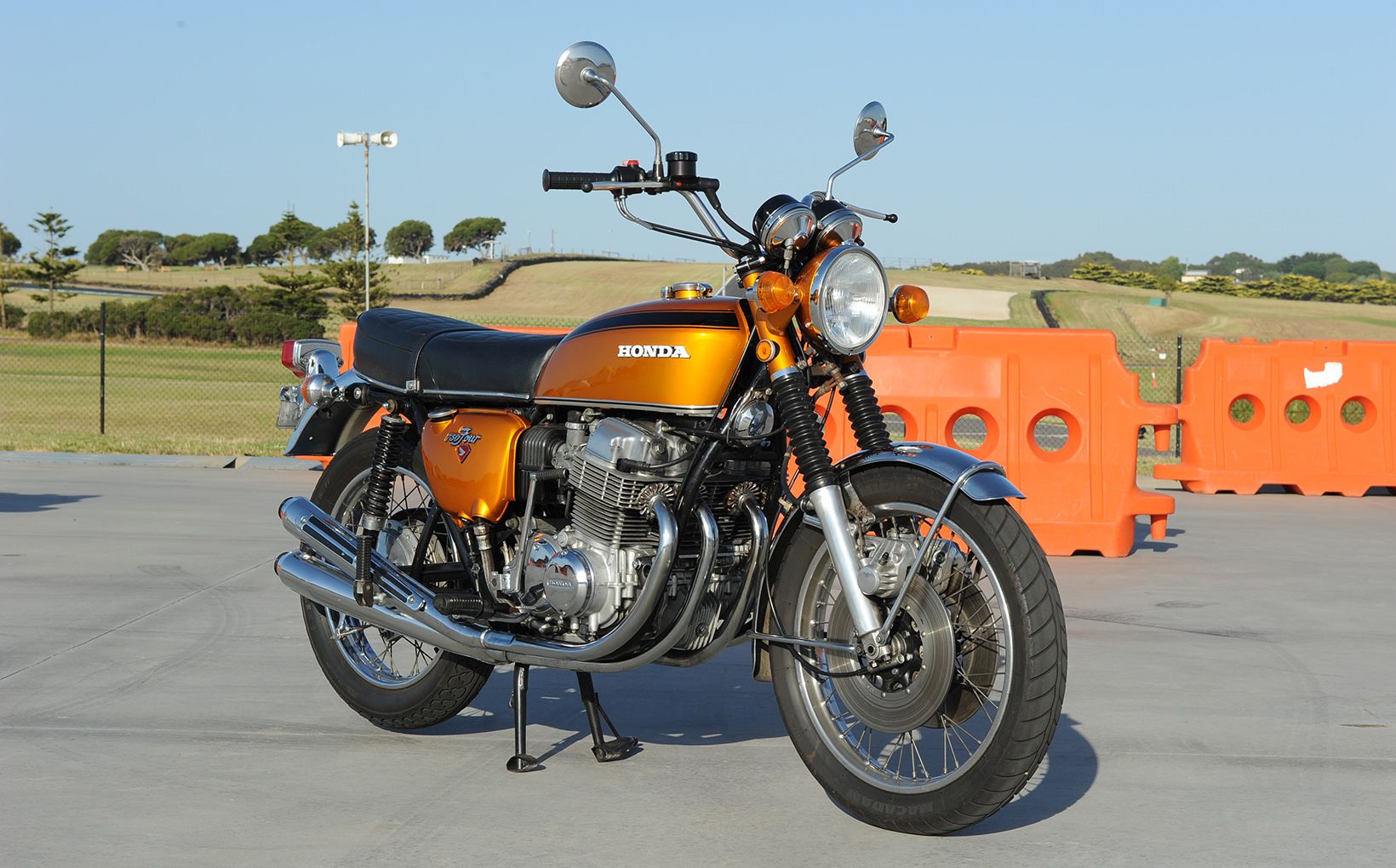 This Honda CB750 Four has quite a history, with owner Don having purchased the bike second hand in 1973 – trading in his 350 Twin in the process. 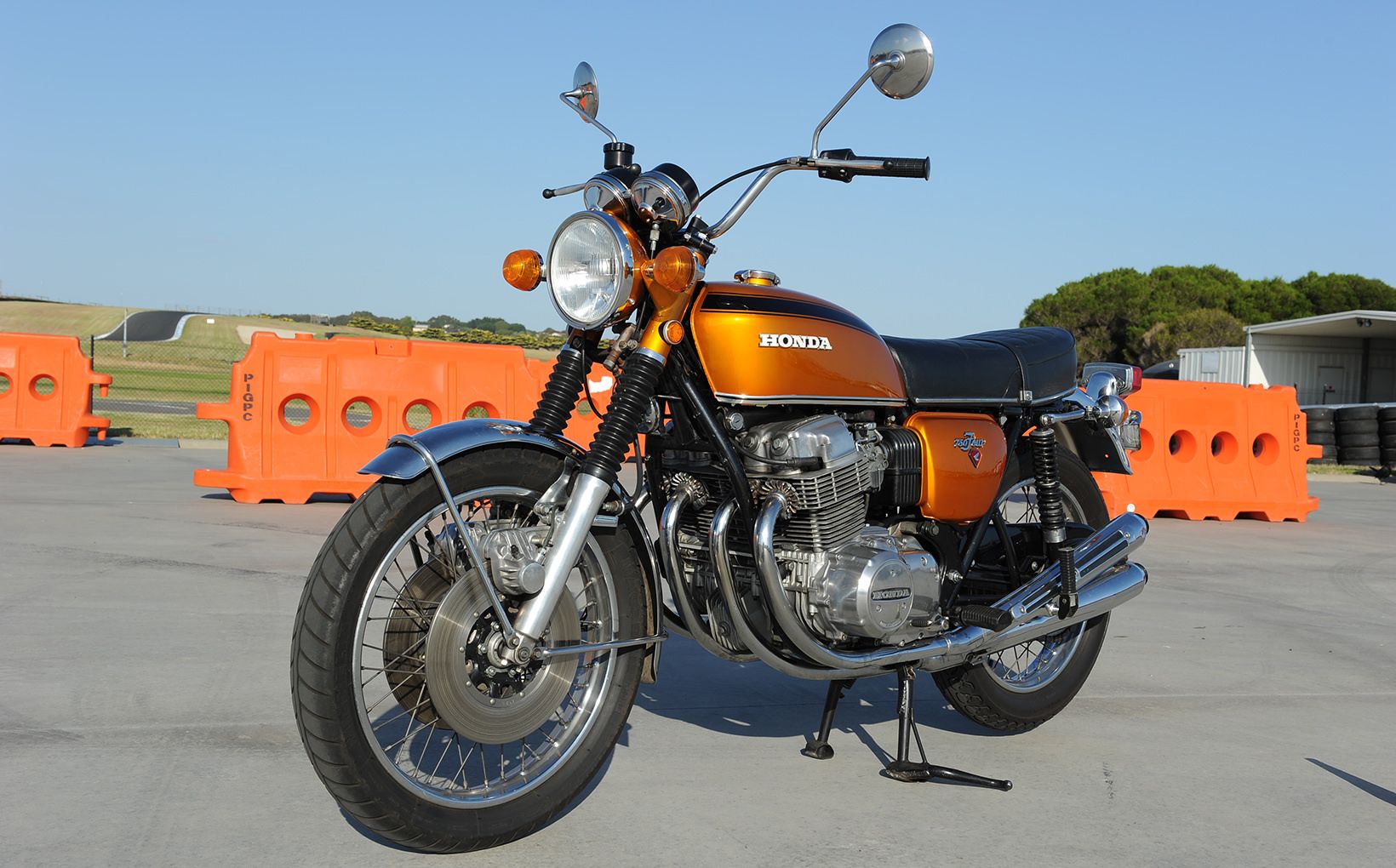 Having always liked the 750, when the opportunity presented itself, he couldn’t resist – particularly a 1971 K1 model with the more powerful engine. The bike would go on to receive a big bore kit, bringing the engine out to 836cc, while a Yoshimura camshaft was fitted, with the bike running at 10.5:1 compression and running on AVGas to prevent detonation. 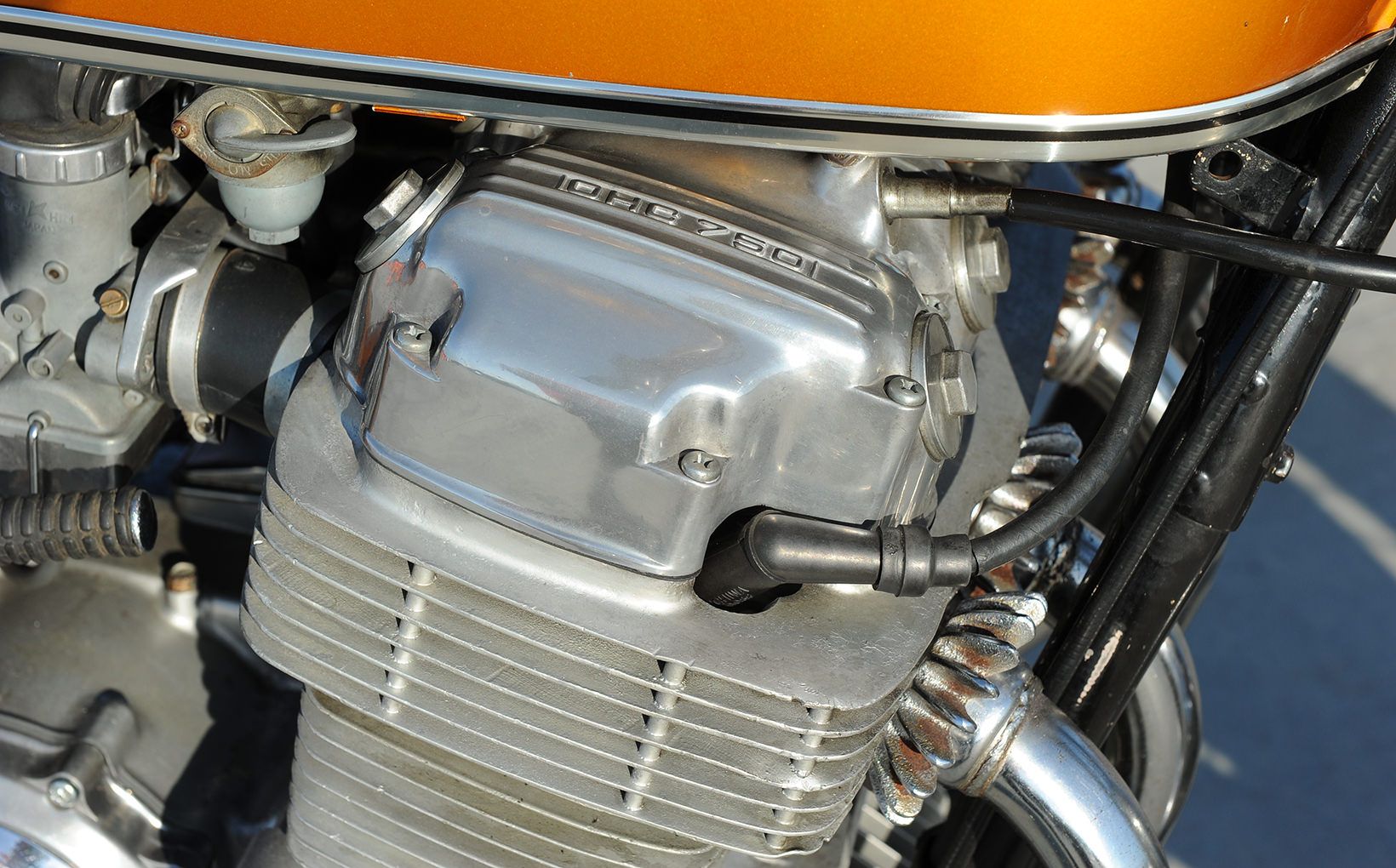 The inline four is one of the most famous engines in the history of Japanese motorcycle production.

Don drag raced the bike at Caldar Park and road raced at Winton, admitting it was a fair sight different then from the bike you see today – with a stylish for the time bikini fairing fitted along with a Z900 tail and metallic bronze paint. 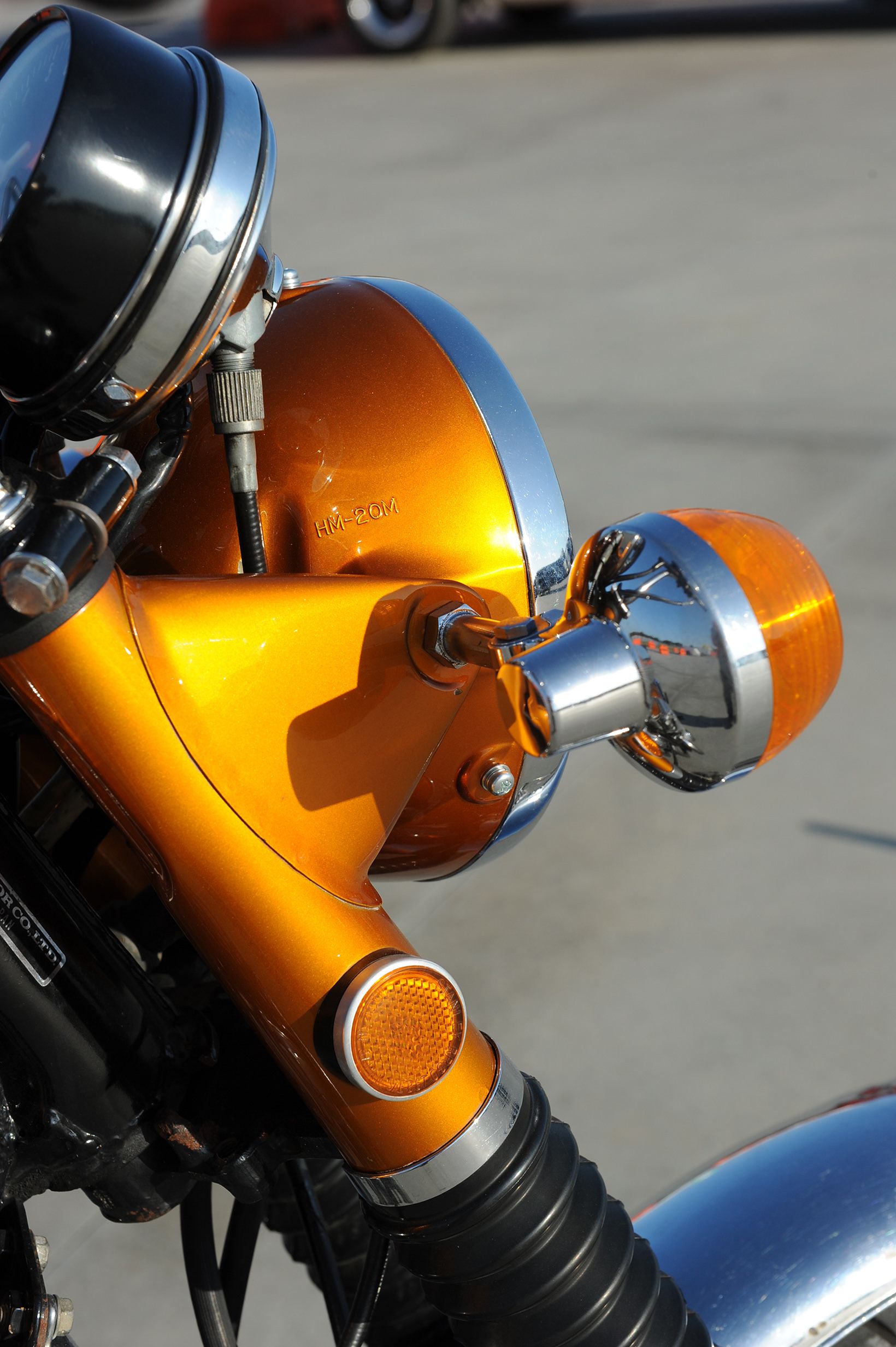 Everything is rebuilt and restored to perfection. 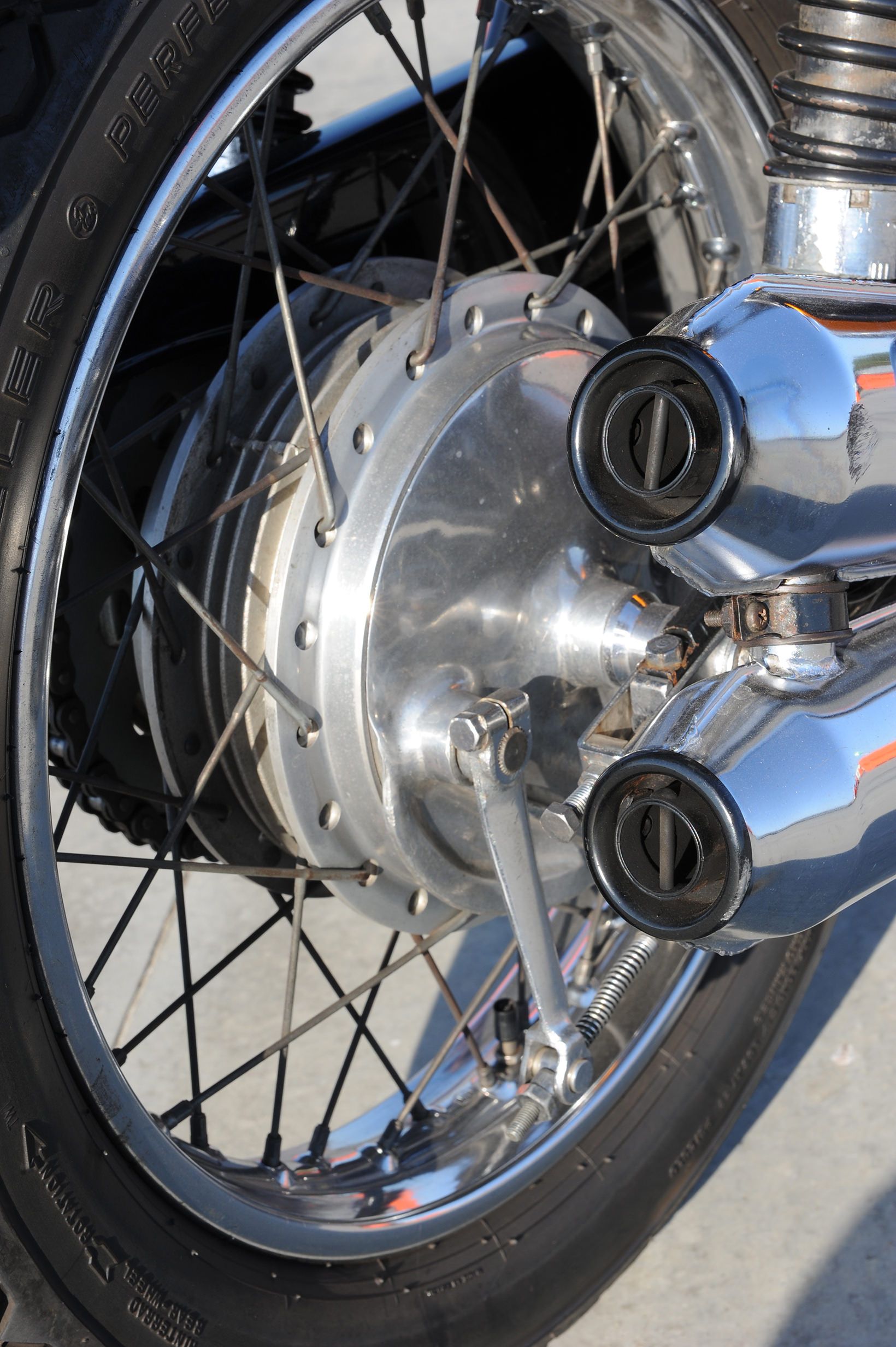 Don had the original exhaust system stored since 1973 and filled with oil!

In the early ‘80s Don sold the bike and it wasn’t until the late ‘80s that they would become reacquainted when Don once again found the bike, this time crashed and in a real state. He knew the bike was his immediately, not just from the engine and frame numbers, but also due to the nuts that he’d originally welded to the frame for some of the custom work he’d done. 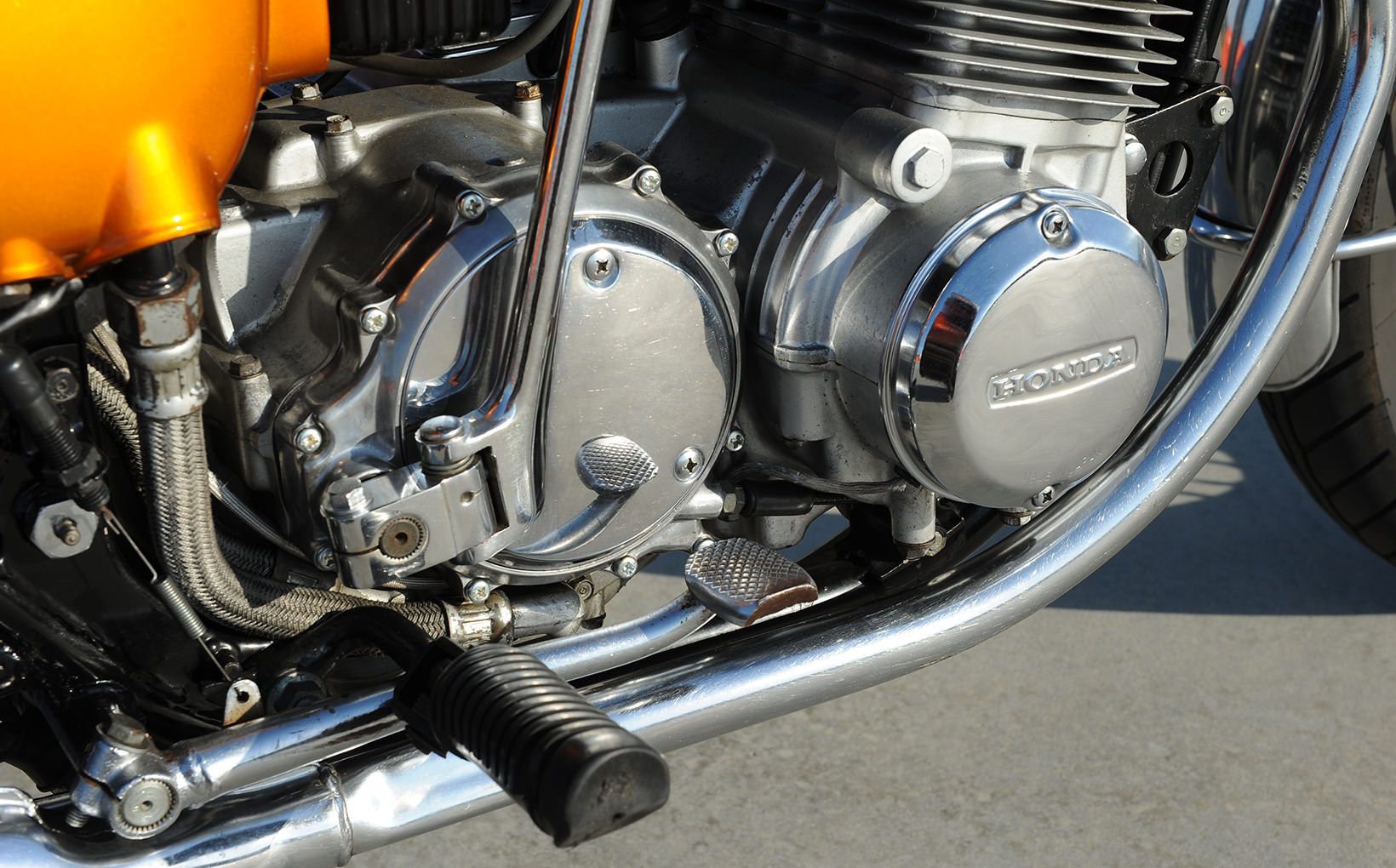 Yes, they had kickstart and electric start!

With new original components still available at the time Don rebuilt the bike, this time building it back to original, including returning the engine to stock trim. This meant replacing all the original bodywork, including the tank – all of which is still fitted to the bike and looking amazing even almost 30 years later. 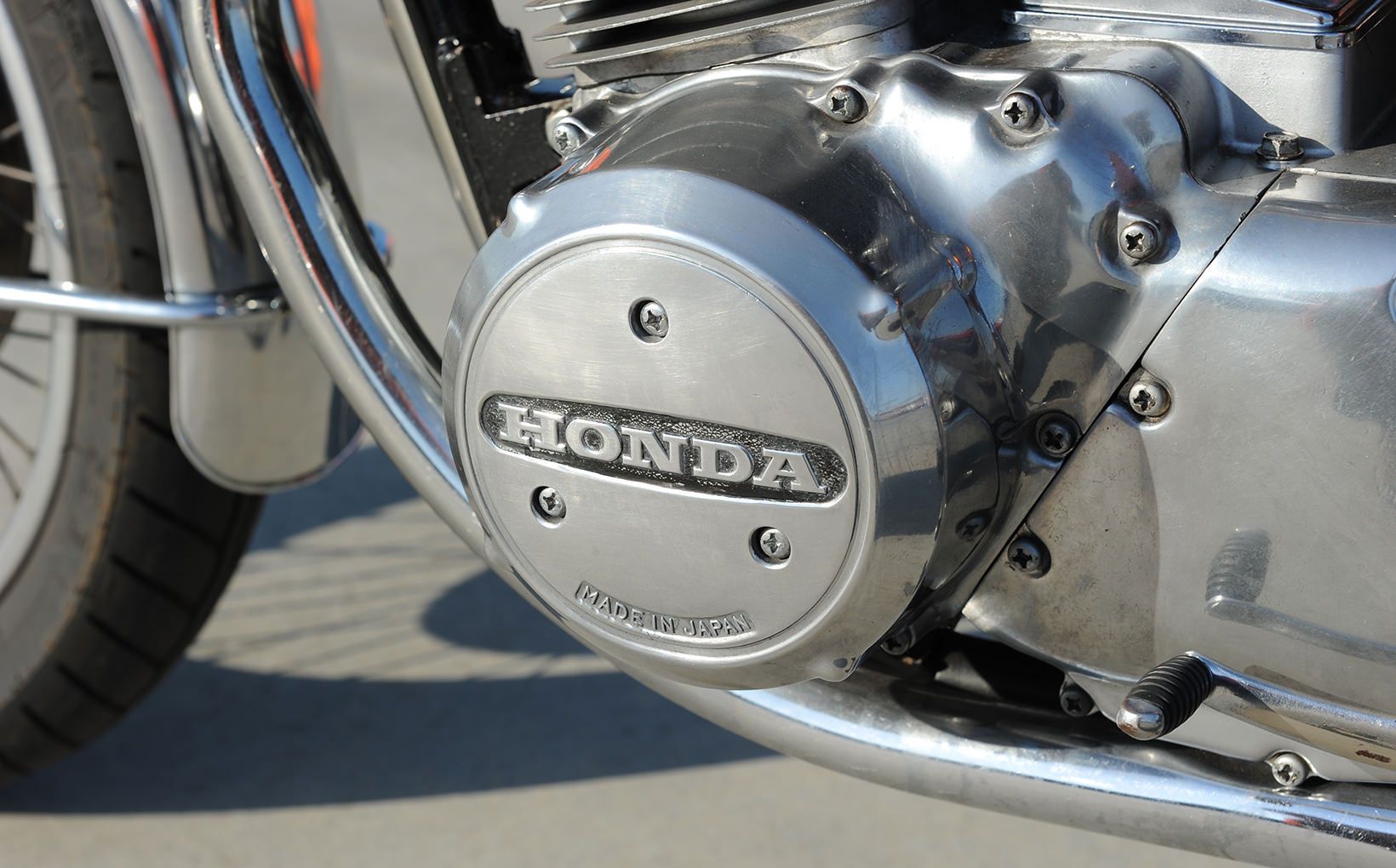 The engine in this 1971 model had a Yoshimura big bore kit and a cam at one stage.

He was even able to refit the original four-into-four exhaust system, which was hanging in a mate’s garage from when he had first owned the bike. Apparently when he first acquired the bike he dismounted the exhaust system, filled it with oil and left it hanging for a period, while keeping the drain holes clean has helped keep the system pristine once refitted.

Don did the full rebuild himself from top to bottom, which brought up the question of that extra front disc brake that stands out on an otherwise original bike. 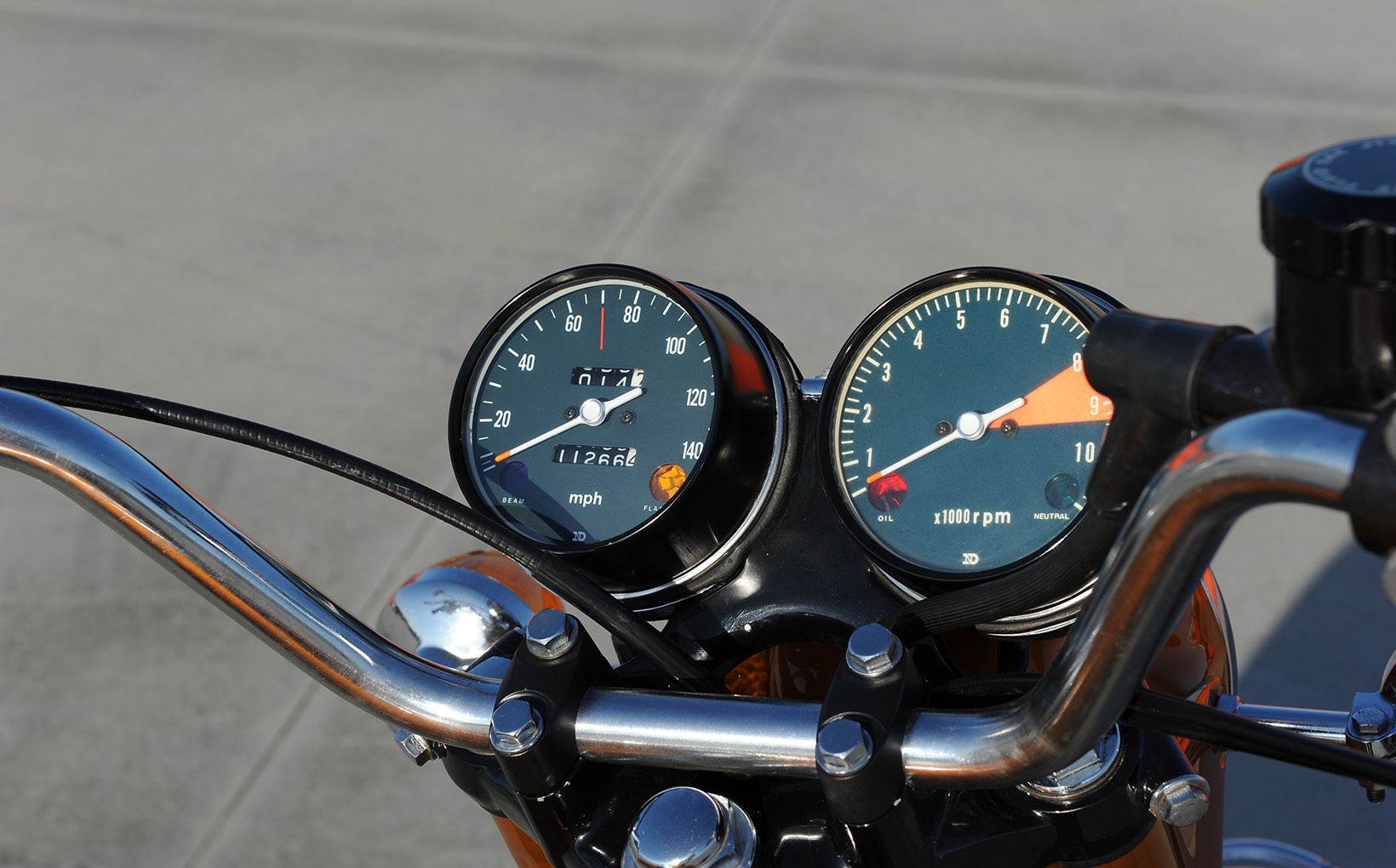 Don explained, “The bike was originally from Singapore, not Australia and was imported, so it actually came with the twin disc kit which was provided by Honda in very limited quantities for a very limited period.

“With such demand for the bike, Honda wasn’t really worried about providing additional components!”

“The bike’s dead stock though and even has the original wiring loom, although I’ve got another new stock replacement on hand for when it eventually packs it in.” 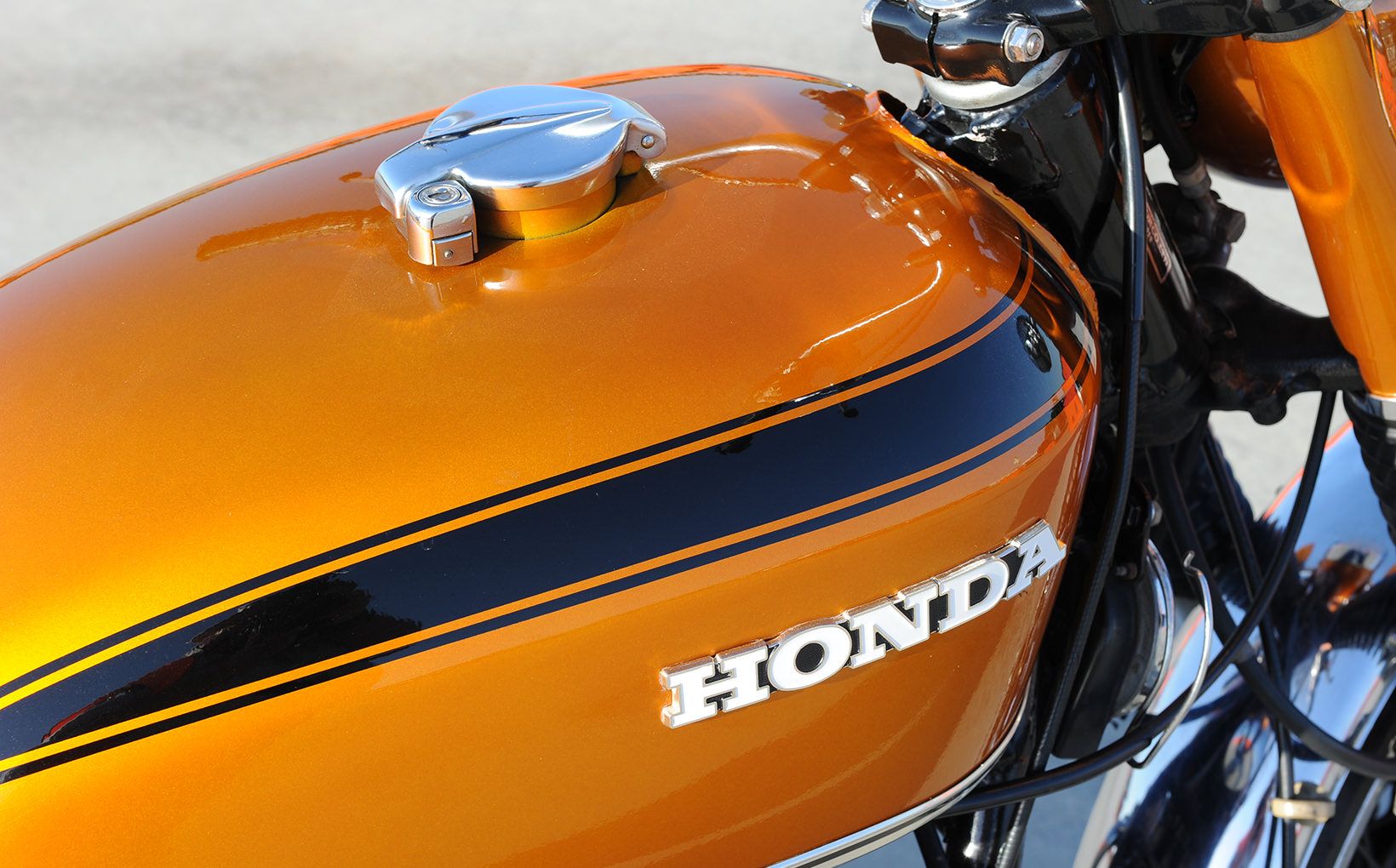 Don also revealed that with the dual disc brakes the bike stops considerably quicker than the regular version.

He even has 1974 mag wheels for the bike, which he’s refrained from fitting due to the bike’s original nature and admitted that it’s only very recently that the bike has been transferred to club plates as he rides it less. 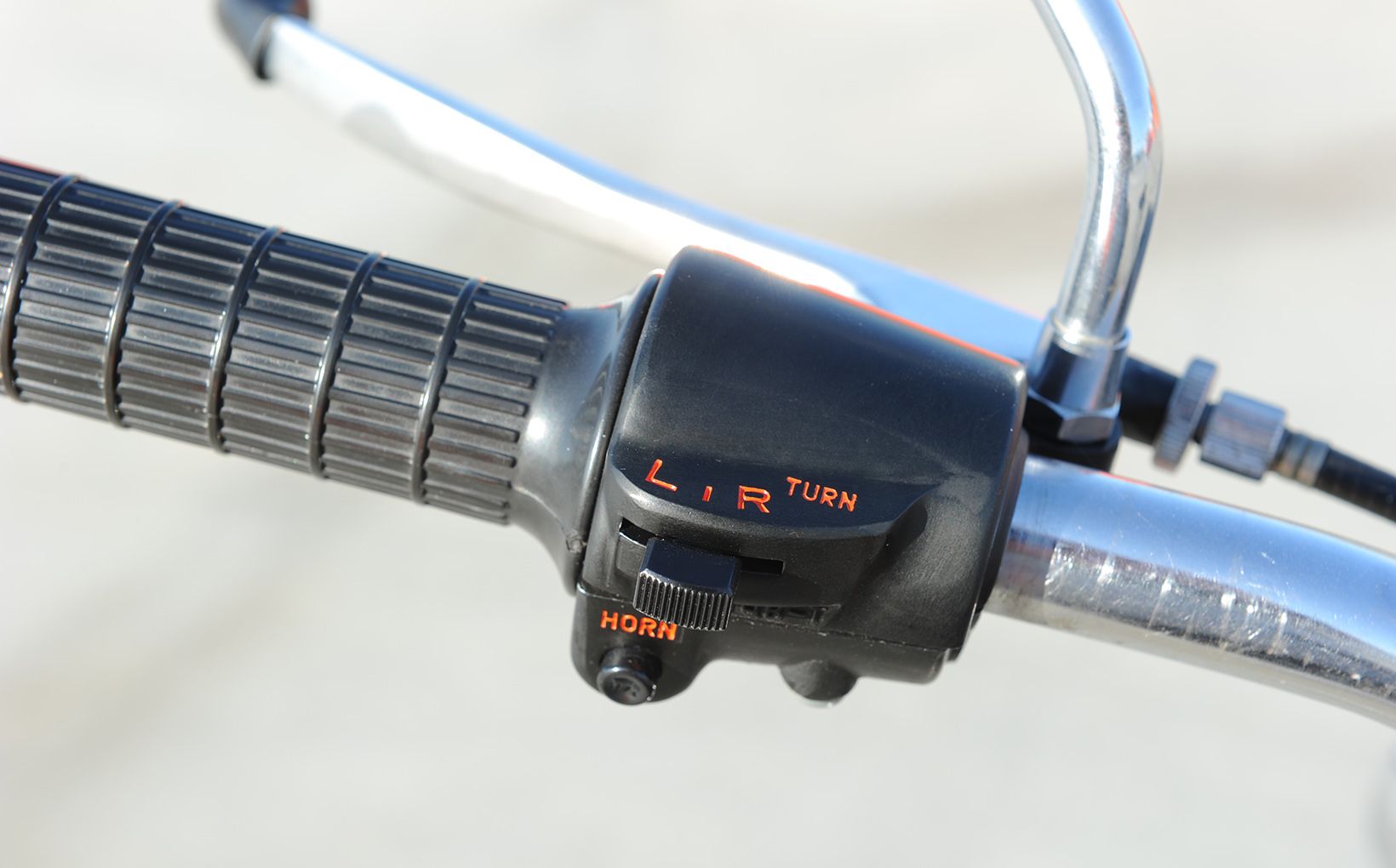 The bike currently has 12,000 miles on the clock, although Don did mention it had already done 70,000 with him when he sold it prior to the rebuild in the ‘80s, so it’s fair to say this bike has been around!

The Honda CB750 was to make quite a splash, with a claim to being the first modern four-cylinder from a mainstream manufacturer. The air-cooled 736cc four-stroke transverse in-line four with 61 x 63mm bore and stroke and a single overhead cam was a move towards providing a motorcycle akin to the manufacturer’s previous 500cc GP machinery. Rather than using Honda’s previous split-type, press-fit crankshaft with needle bearing, the engine used an integrated crankshaft with metal bearing. 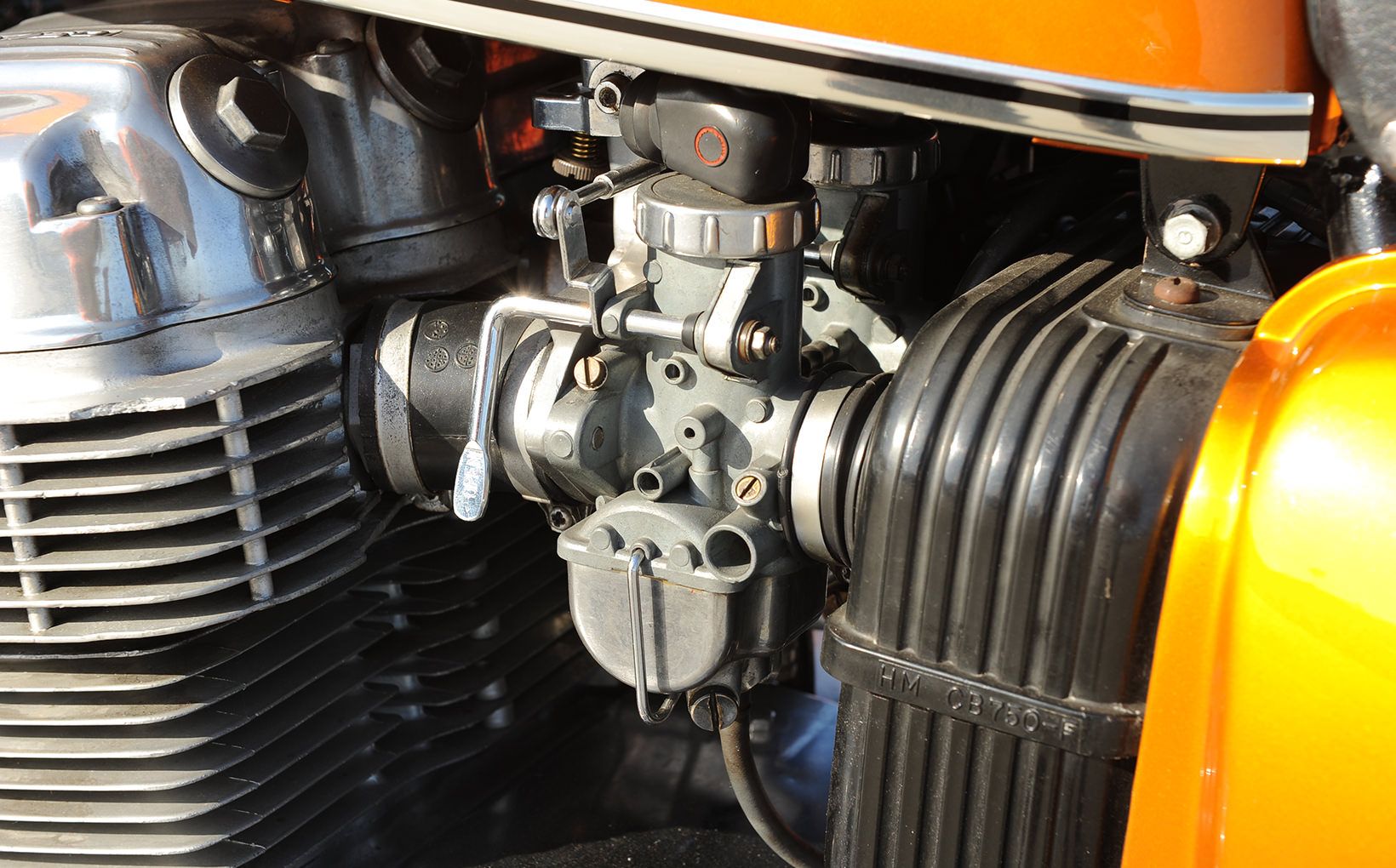 Producing 68hp at 8500rpm, the engine would blow the competition out of the water in 1969, while the bike’s first appearance at the Tokyo Motor Show in 1968 had chins vigorously wagging.

The adoption of a hydraulic single front disc brake was a directive from Mr. Honda himself, with the newer technology adopted and put through its paces to ensure optimum braking performance and safety and serving to impress many motorcyclists. 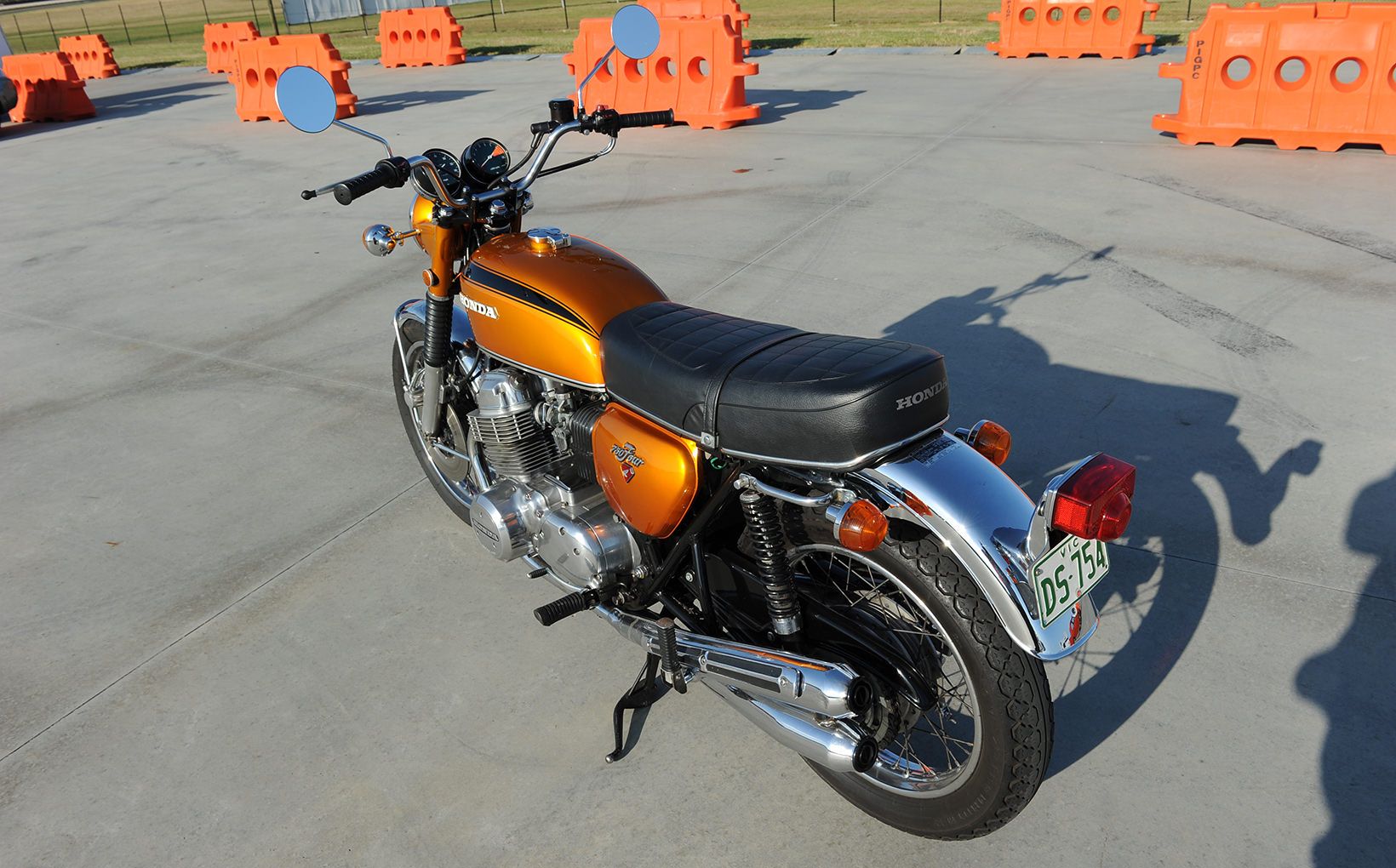 The CB750/4 was so popular Honda had to increase production from 5 to 100 units per day!

At the end of the day however, it was the engine that dominated the bike, boasting four 28mm Keihin carburettors with individual throttle cables, along with the iconic four-into-four exhaust and a top speed of 125mph or 201km/h.

Originally the bike’s popularity was uncertain, and Honda produced engines via permanent mold casting, with the first 7400 or so units using this method and frequently referred to (incorrectly) as sandcast, before later models became the more common die-cast versions. 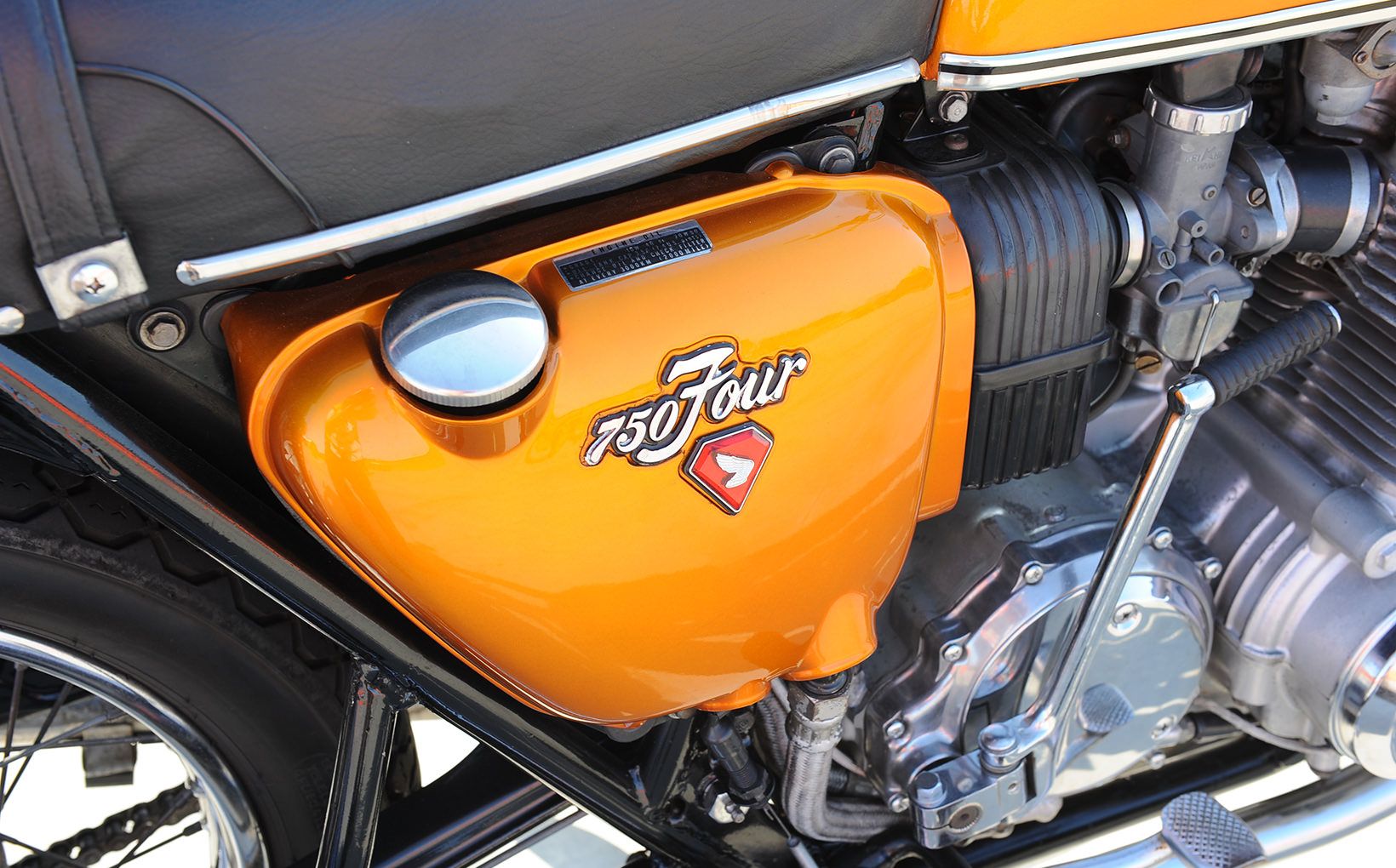 The external oil tank for the dry sump motor.

Such was the demand that the original production of five units a day was pushed to 25 and then 100 per day, at which point the die-cast production facility was adopted before eventually moving to the Suzuka Factory in 1971.

The original 1969 models – the CB750K or CB750K0 have retained the most value since introduction, as the ultimate collector’s edition of the bike, while production varied from 1969 through to 1978 with between 35,000 and 77,000 models produced per year. Such was the demand and production quantity that the CB750 lines took staff from other areas including the car production side of the business, with retraining provided to suit the new roles.

Even more startling at the bike’s introduction was the announcement at Honda’s first US dealer meeting – held in Las Vegas – of the bike’s recommended retail price, a staggeringly affordable $1,495, with the competition retailing for between two and three times this price. The bike was commonly sold for around the $1800 mark due to demand. 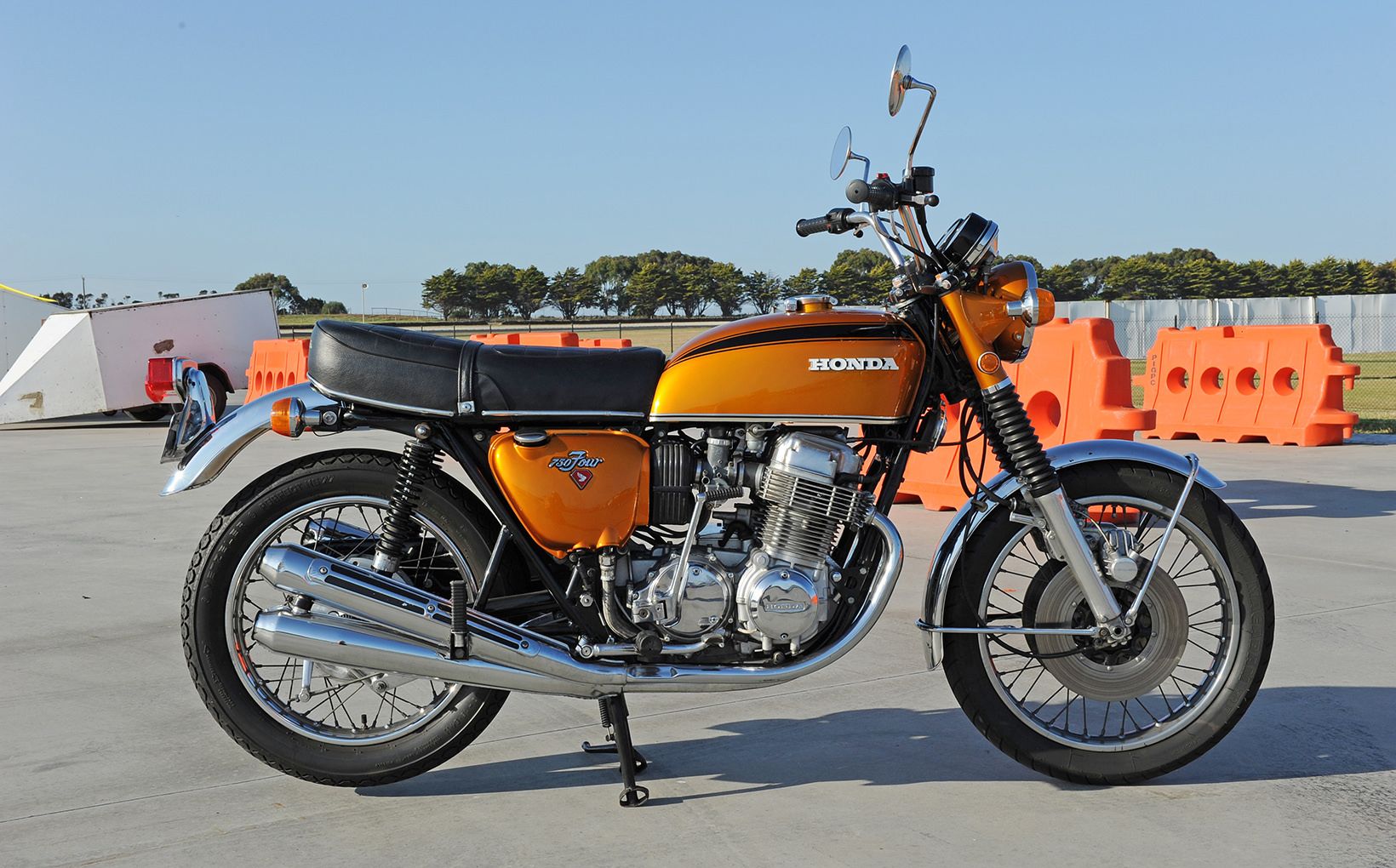 Bigger is better in the USA and that is why the CB750/4 was developed.