The Bimota 500 V-Due was originally destine for the world GP circuits, unfortunately this was not meant to be, mainly due to lack of funding – so a decision was made to make the V-Due a street legal racer, at a premium price of $34,000, which was a lot back in 1997. 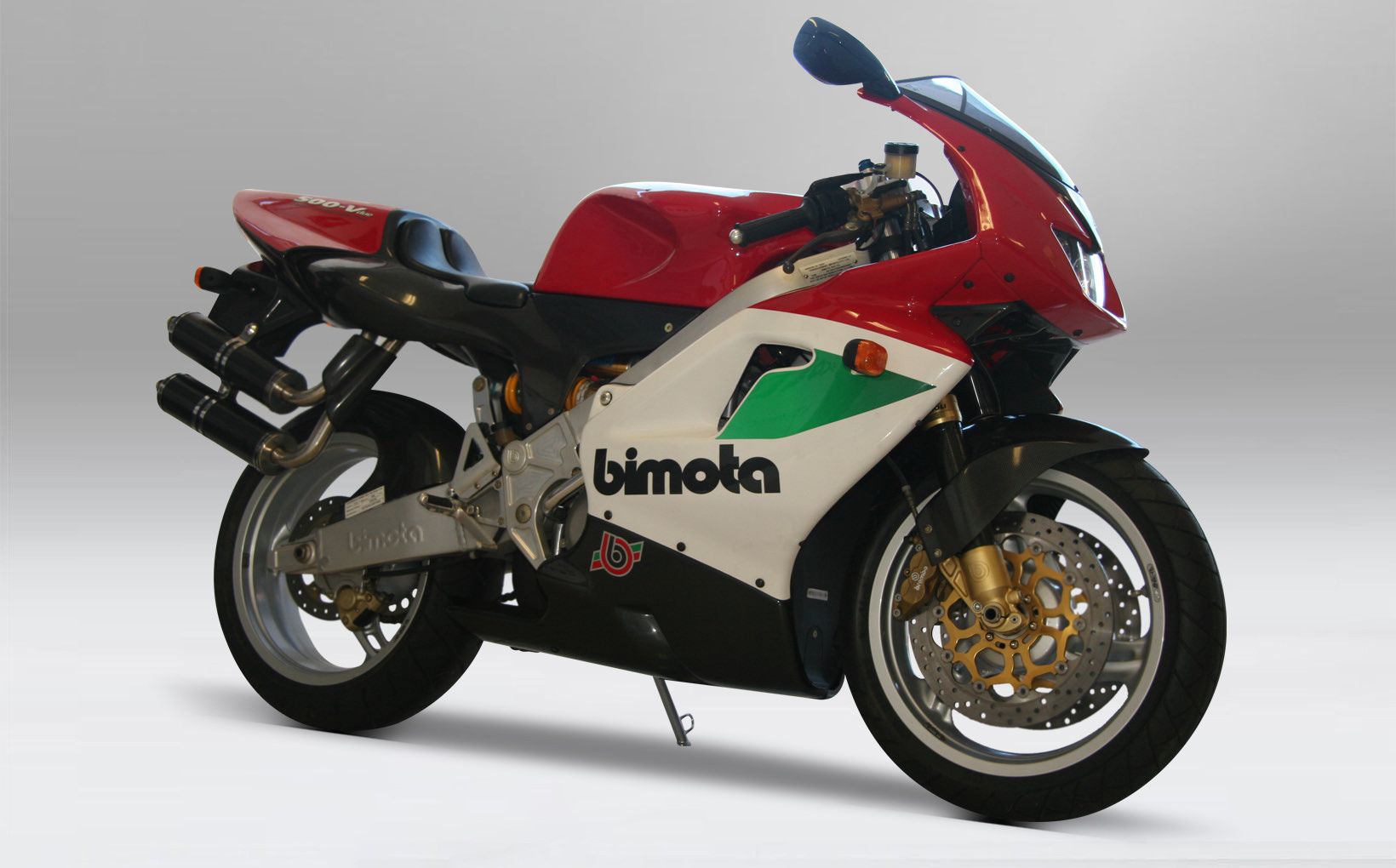 The V-twin engine was the first ever engine that Bimota had produced, before that the company had bought all its motors from other manufactures and slotted them into their own frames. The actual engine took eight years to develop and produce and as you can imagine, for a small company the cost of this was extreme. 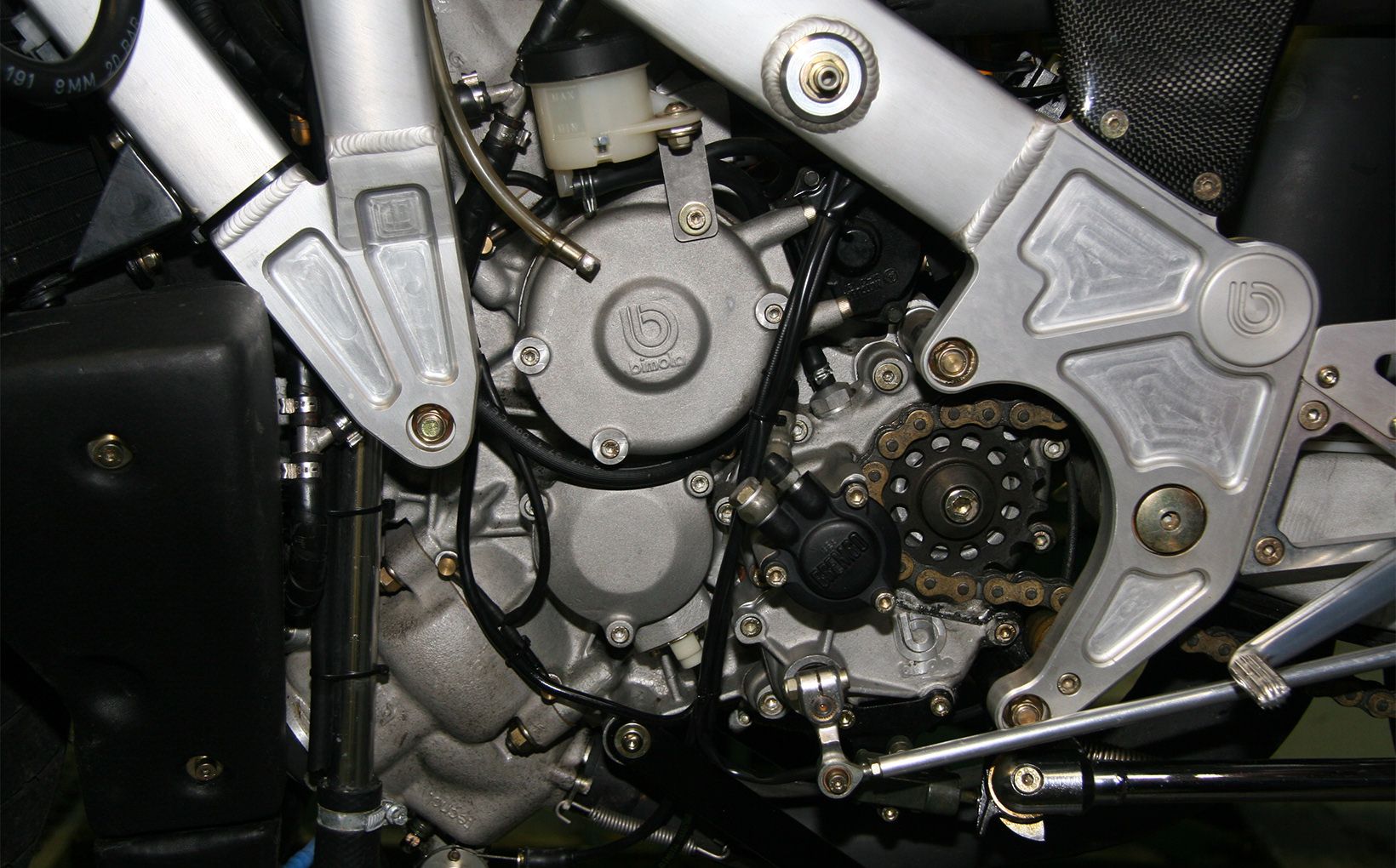 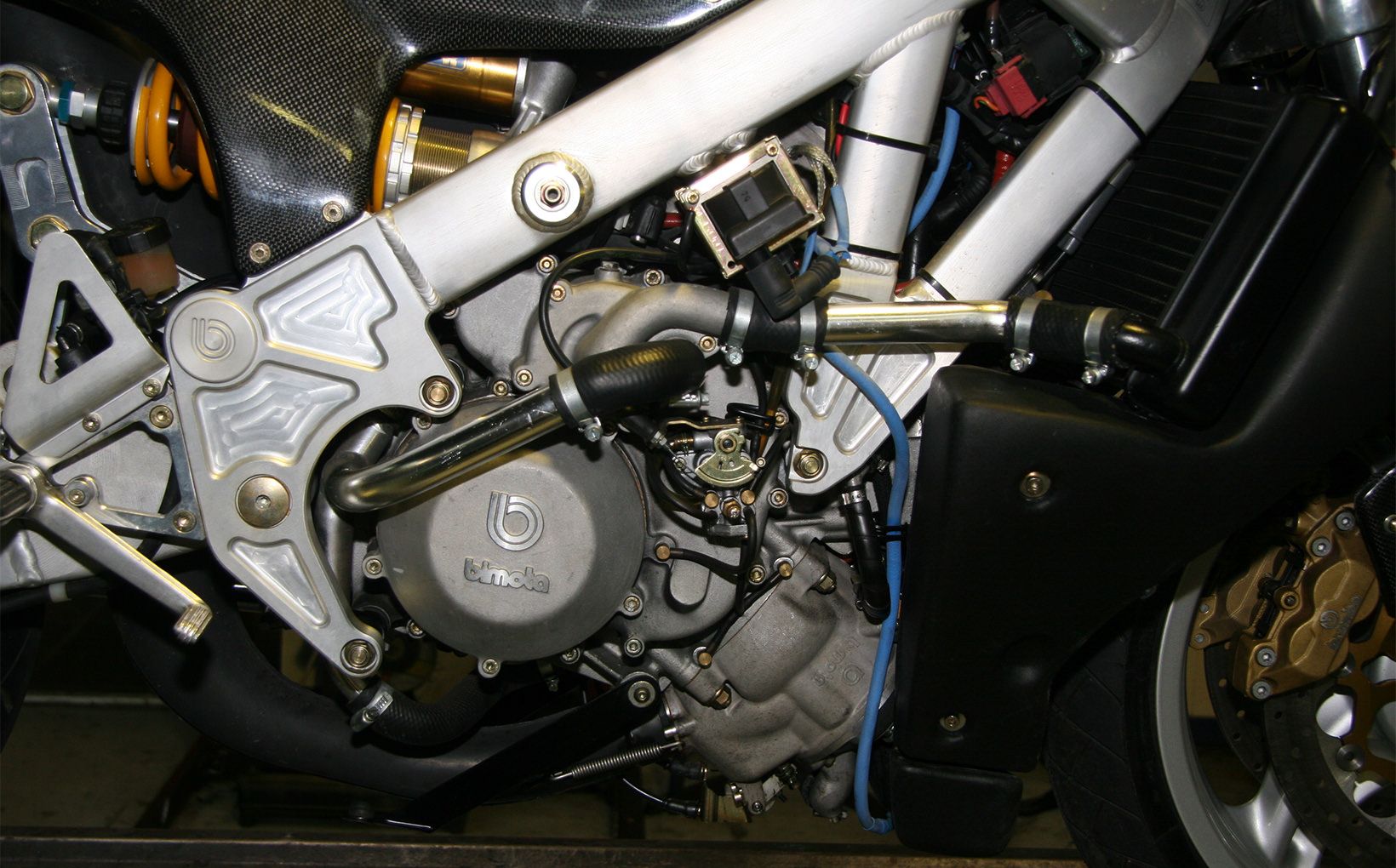 The engine itself was 499cc, liquid-cooled, two-stroke, V-twin that produced 126hp at 9000rpm and 90Nm of torque at around 8000rpm. The motor was direct fuel injection­ ­– this was designed so the two-stroke engine could meet stick US and European emission laws. The decision to make the bike fuel injected ended up to be a very costly one as the injection system proved to be very problematic, and with the companies financial woes they did not have the money or manpower to fully sort it when the bike went into production. 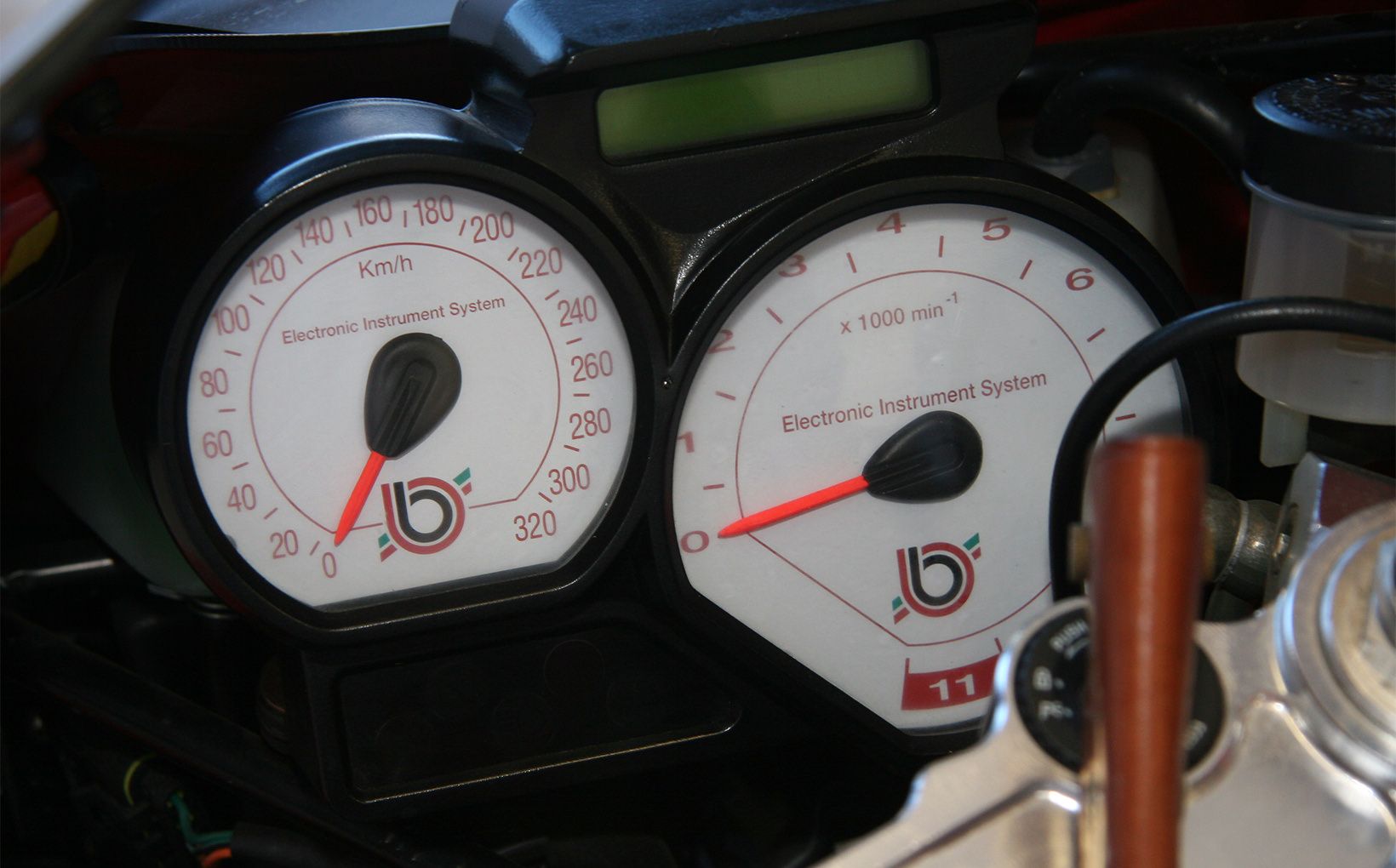 Modern for the day, electronic clocks. Ancient these days…

Eventually, the fuel injection and electrical malfunctions would send the company into receivership as owners started demanding refunds. The company later changed the bikes to carburetor and called it the ‘V Due Evoluzione Strada’ but it was too little too late and Bimota went belly-up in late 1999 after only producing 388 bikes out of the 500 they had originally intended. 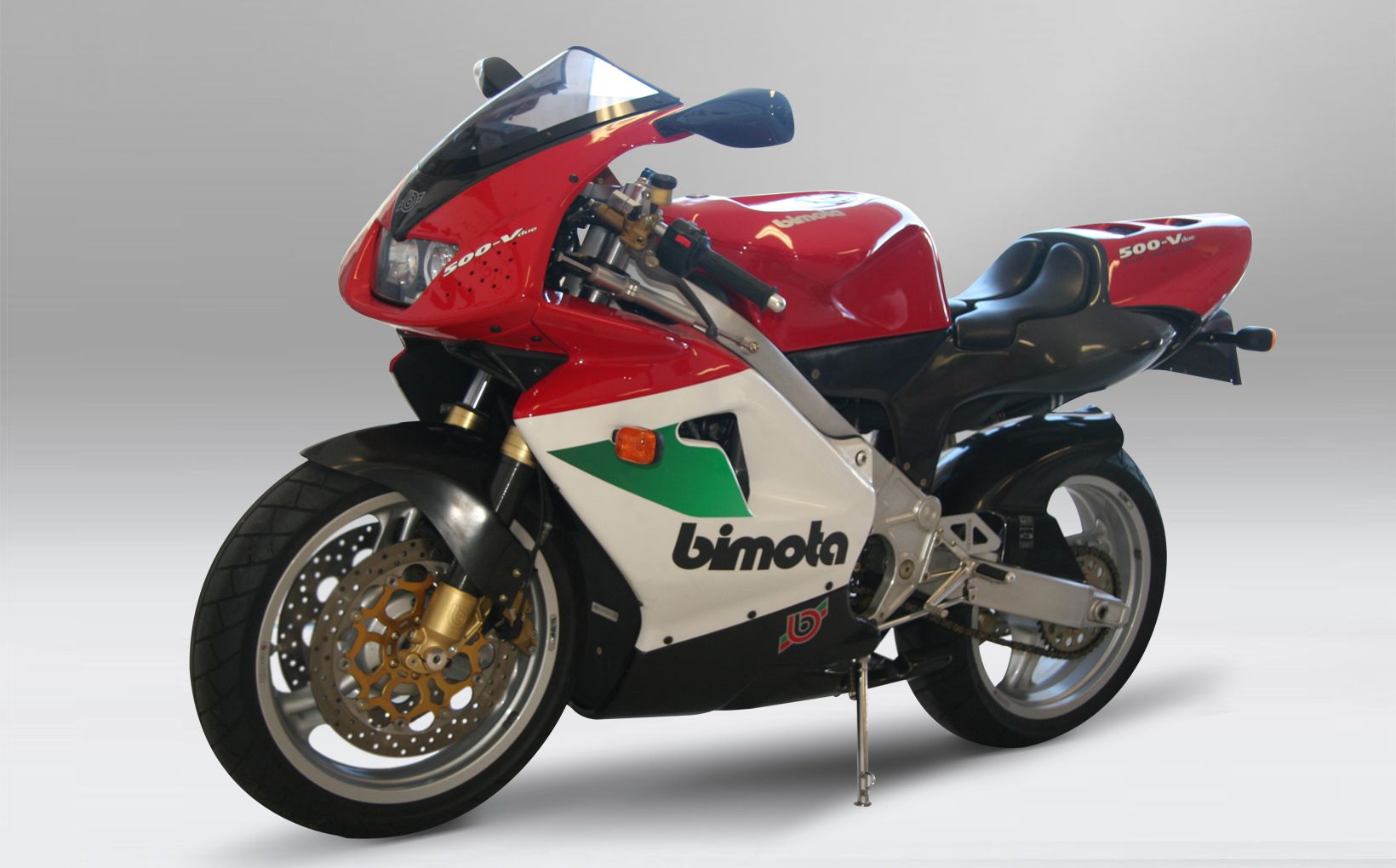 Amazingly, the V-Due was the only Bimota that used an actual Bimota built engine.

The Bimota V-Due was essentially a race bike for the street and as you’d expect, had all the best bits on it to make the V-Due handle like a true racer. The stiff oval section chassis was made from lightweight alloy and is mated to strong chunky alloy swingarm. At the front the V-due had fully adjustable 46mm Paioli conventional forks but have very expensive looking carbon-fibre outer tubes, while at the back Ohlins take care of the rear-end damping. 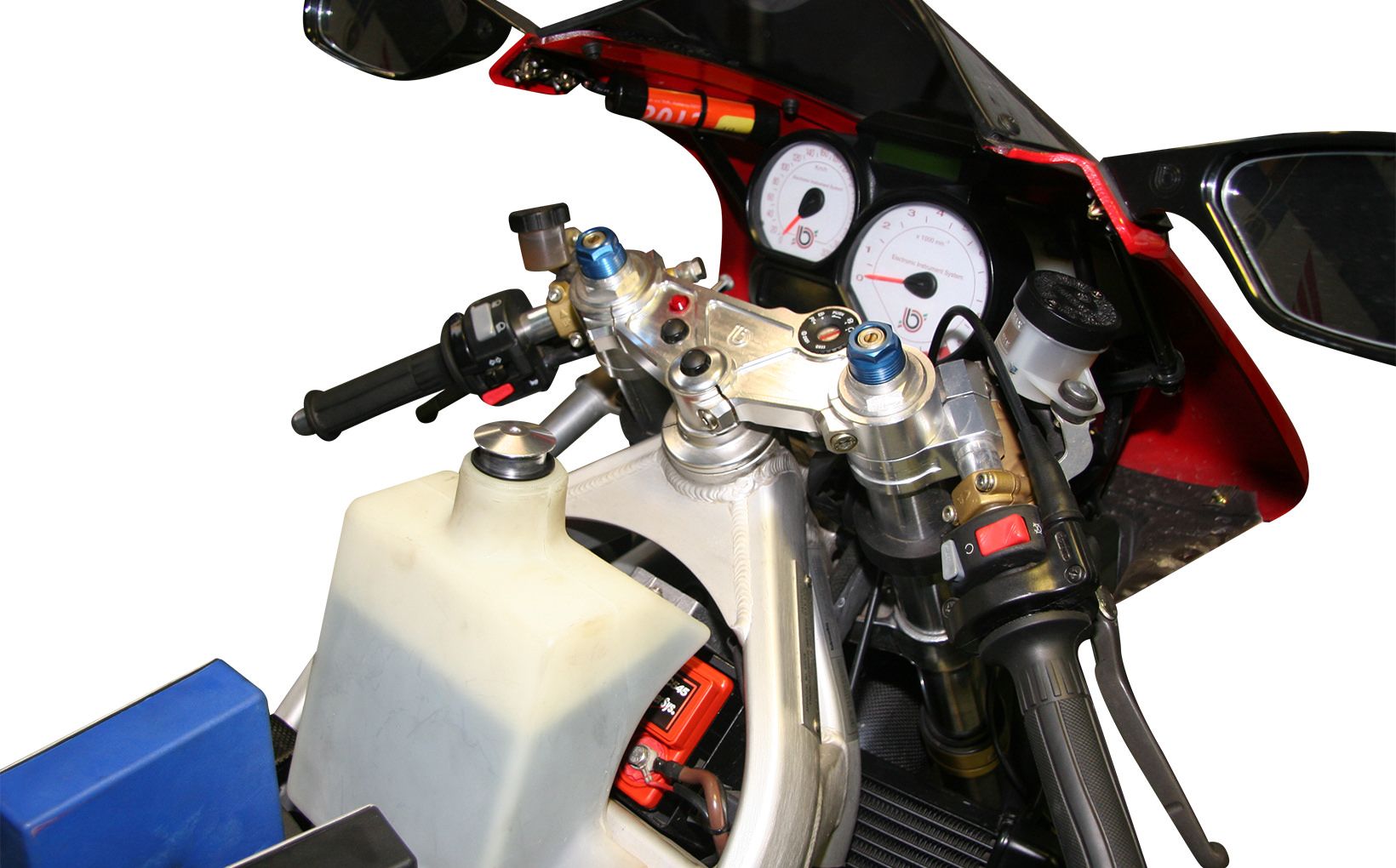 The oil reservoir is under the fuel tank. The frame rails are huge.

The brakes are Brembo all round including the master-cylinders; at the front are four-pot Goldline calipers that grab hold of 320mm floating rotors. At the back the V-Due uses a single pot caliper with a 230mm rotor – each being feed by stainless braided lines. The wheels are lightweight three-spoke Antera ones and are both 17-inch; the front has a 120/70 tyre while the back sports a 180/55. 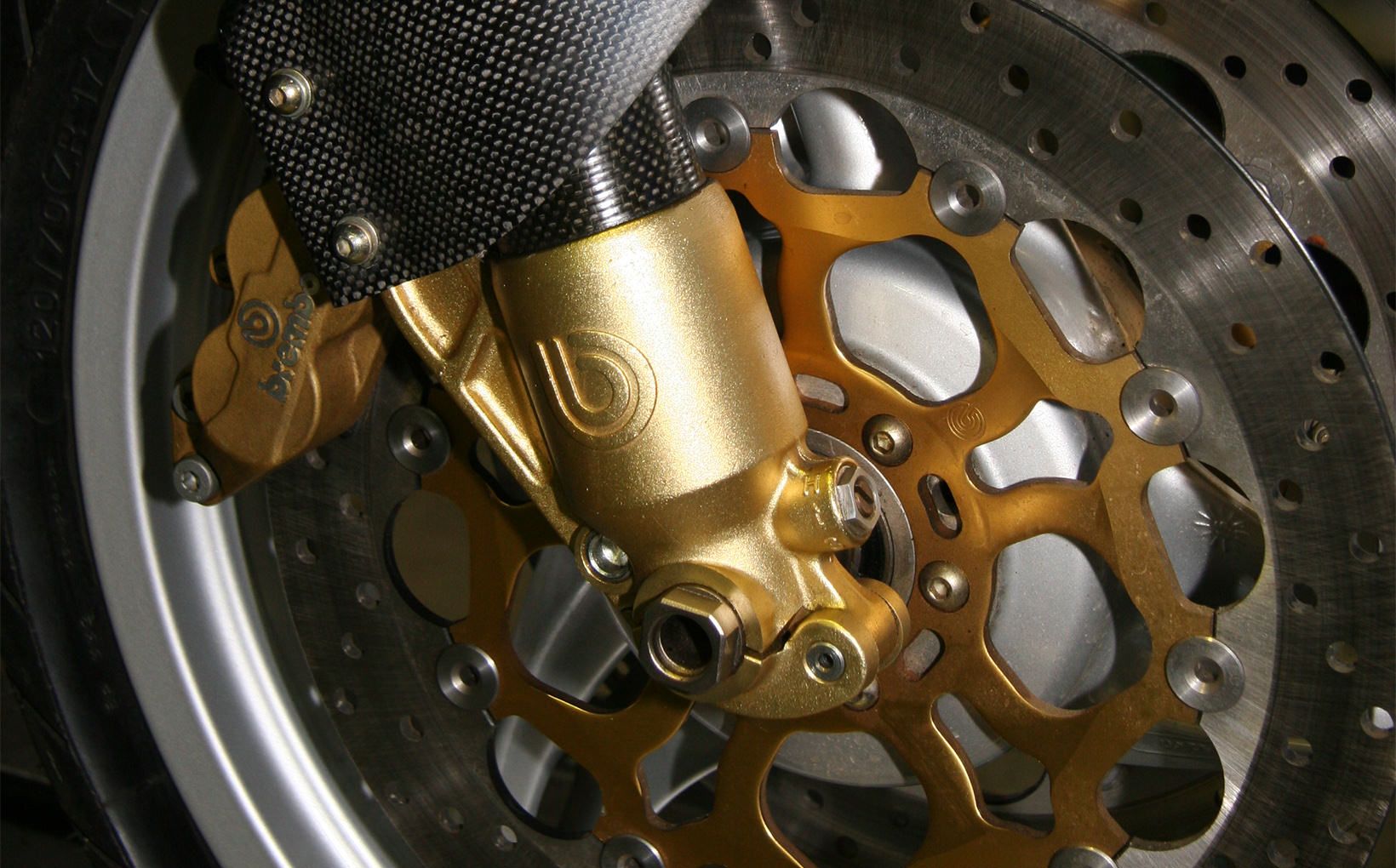 The Bimota engine was extremely light and sits low in the chassis, rotated forward for a low centre of gravity. The direct injection system uses four injectors and feeds the fuel into four-port throttle bodies for ultimate efficiency. The six-speed gearbox is a cassette style, which makes removal very easy and also allows for precise gear ratio selection. 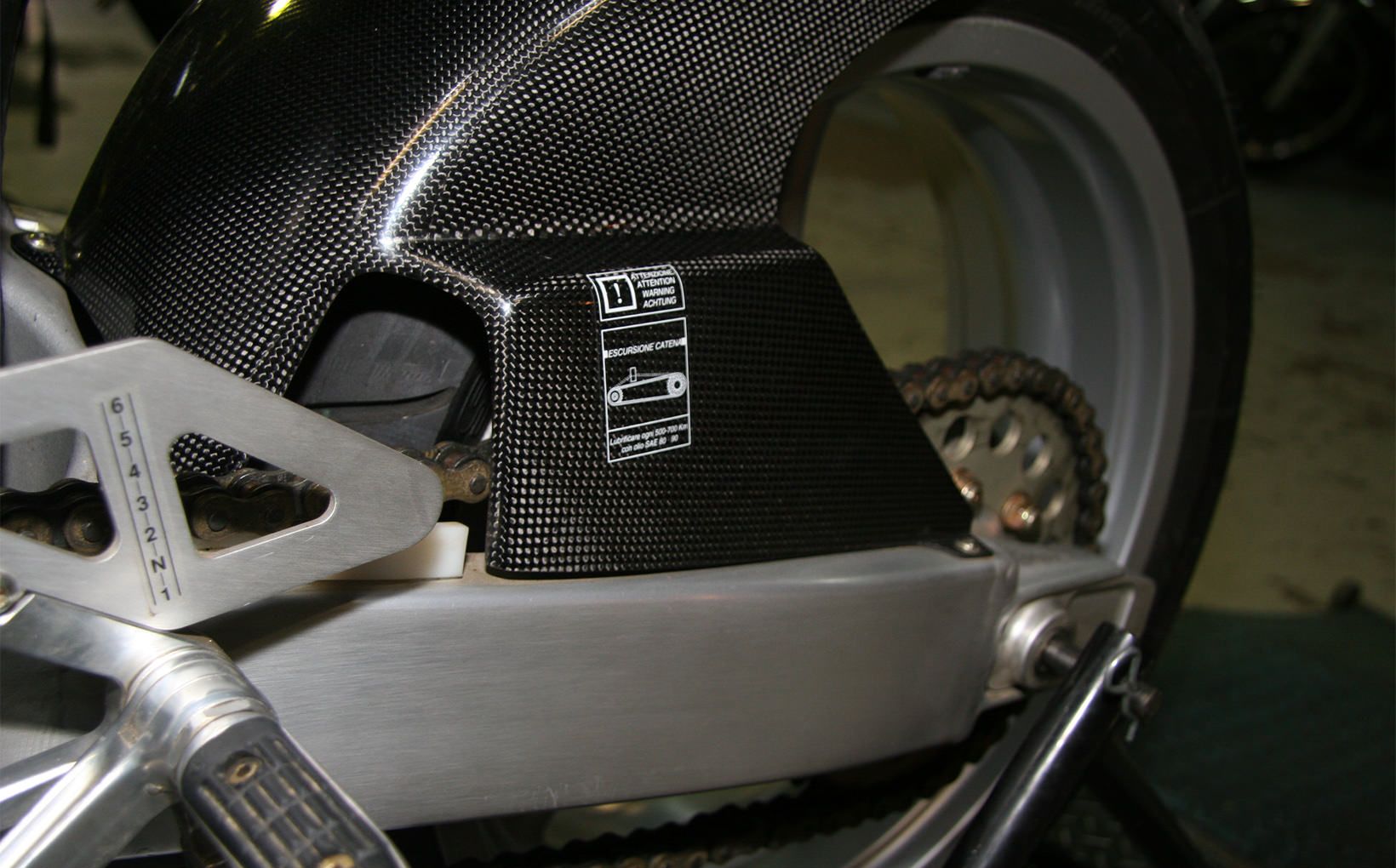 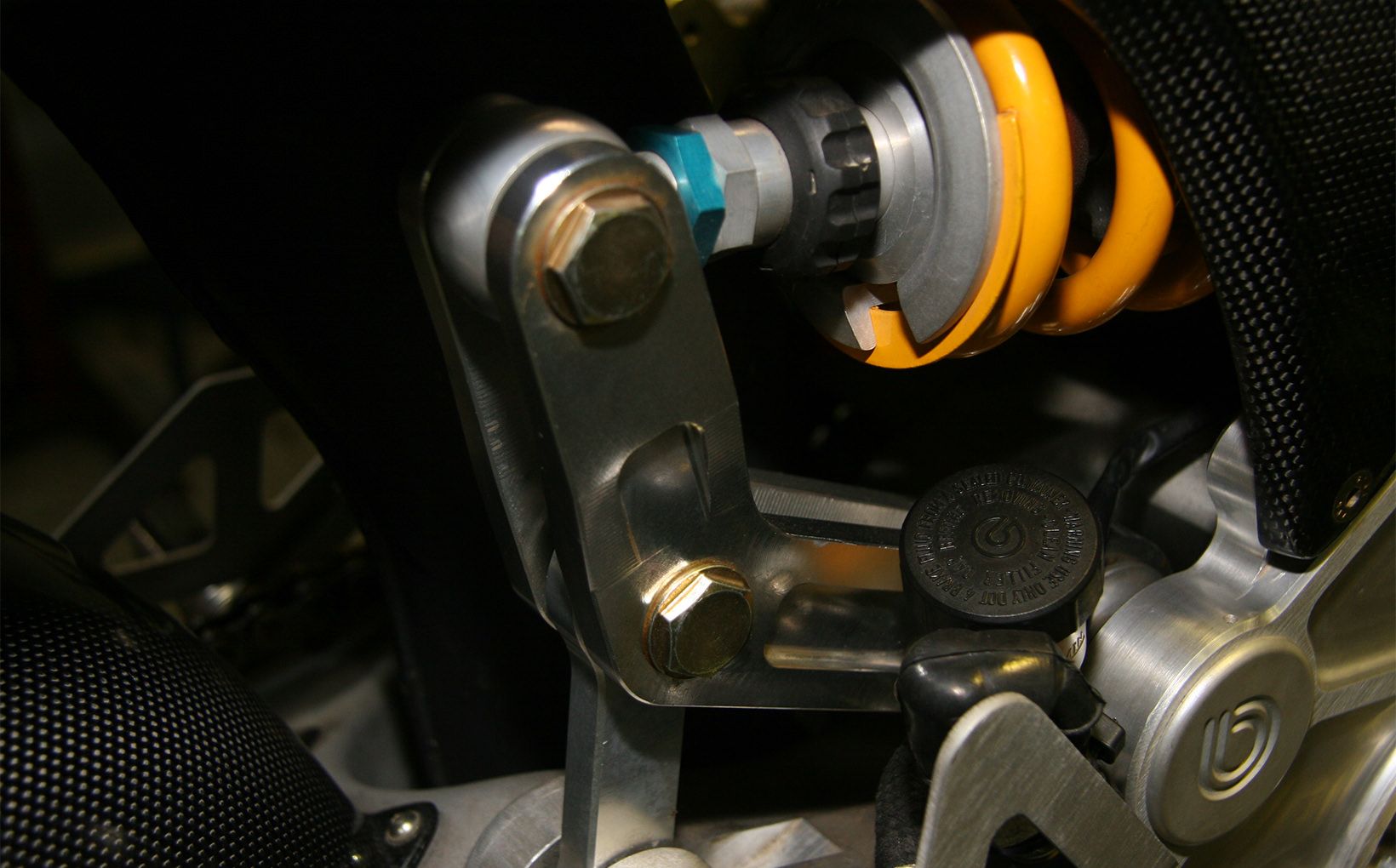 The bodywork is exotic and a thing of beauty, the whole lot is one-piece, including the sub-frame and is made from high quality pre-peg carbon-fibre. If this bike were mine I would have it mounted on my wall in my lounge to I could drool every day… 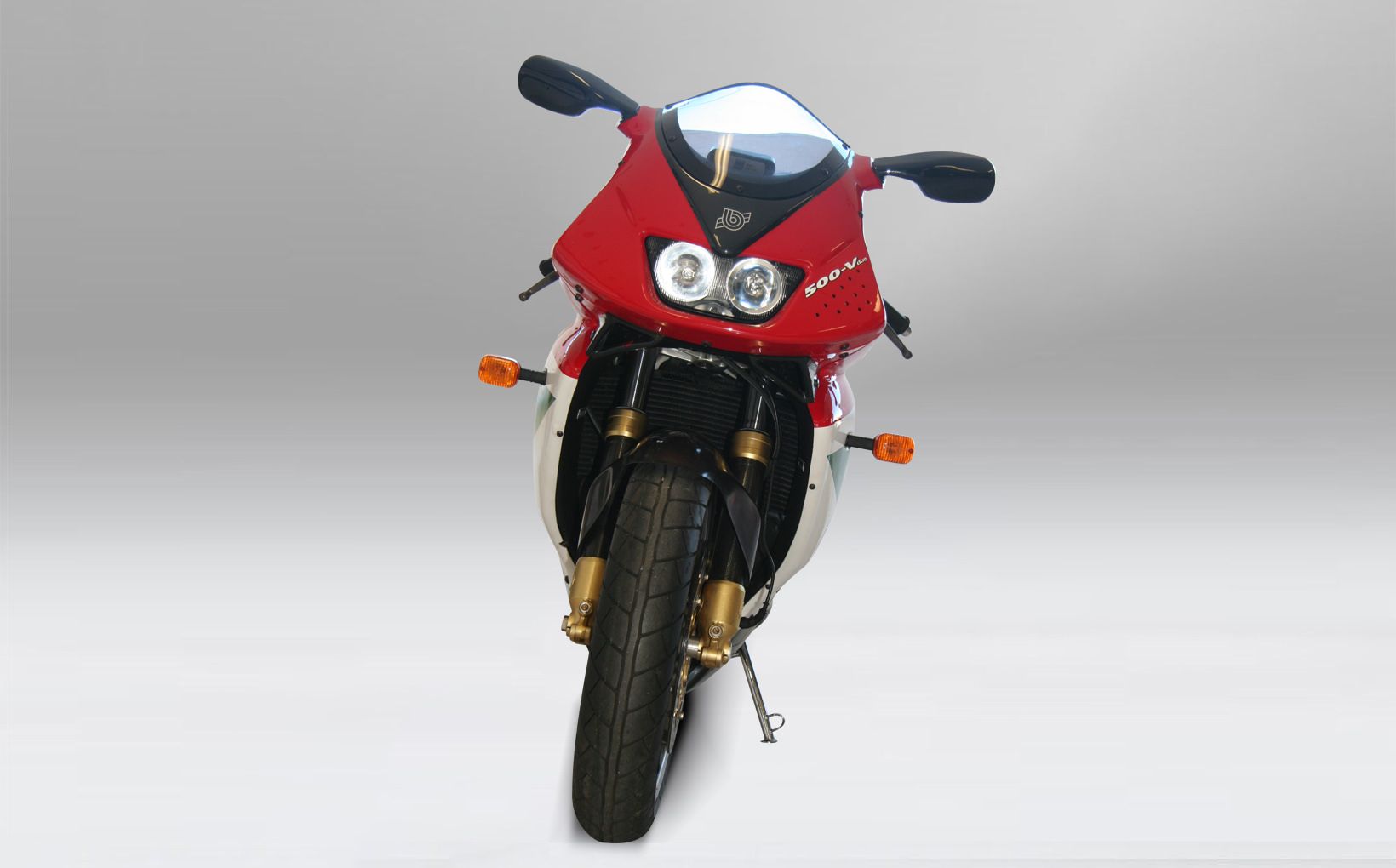 Slim, lightweight and rare. The V-Due is probably the most desirable two-stroke for the avid collector. 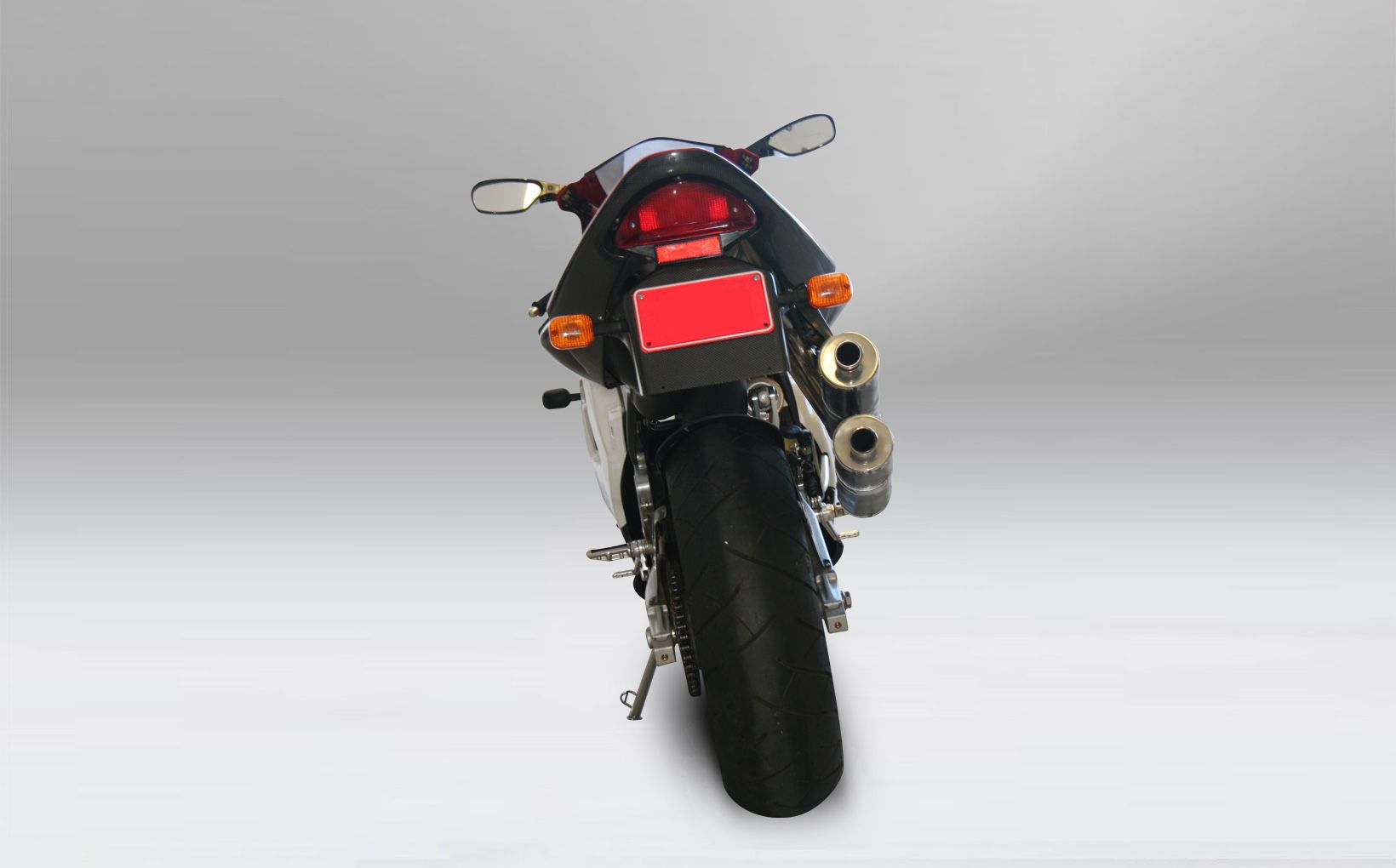 This particular bike is owned by Trevor, who was kind enough to let us feature his exotic piece of Italian history. The bike itself is very rare and the only road registered one in Australia. Trevor bought it from his friend who actually worked for Bimota on the development of the bike in the ’90s. When the company went bust the bike was given to him as part payment for work done. In fact, it is now one of just a handful that have not been converted to carby and since Trevor has all the Bimota computer software, he has fixed up the originally suspect direct fuel injection problems and the bike now runs sweet as a nut. 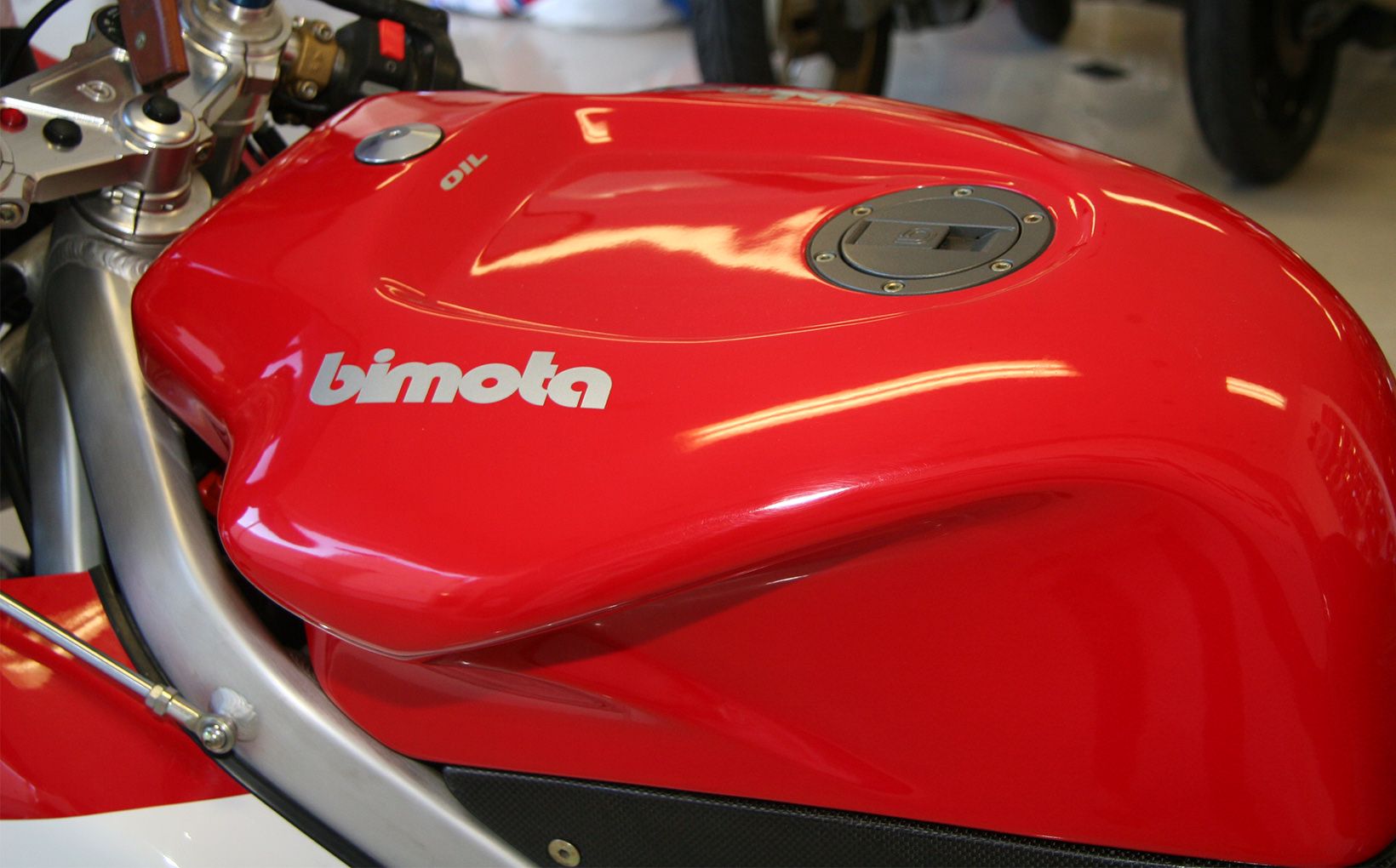 A 20L tank but that got swallowed u quickly if the bike was running. The V-Due was plagued by fuelling issues. 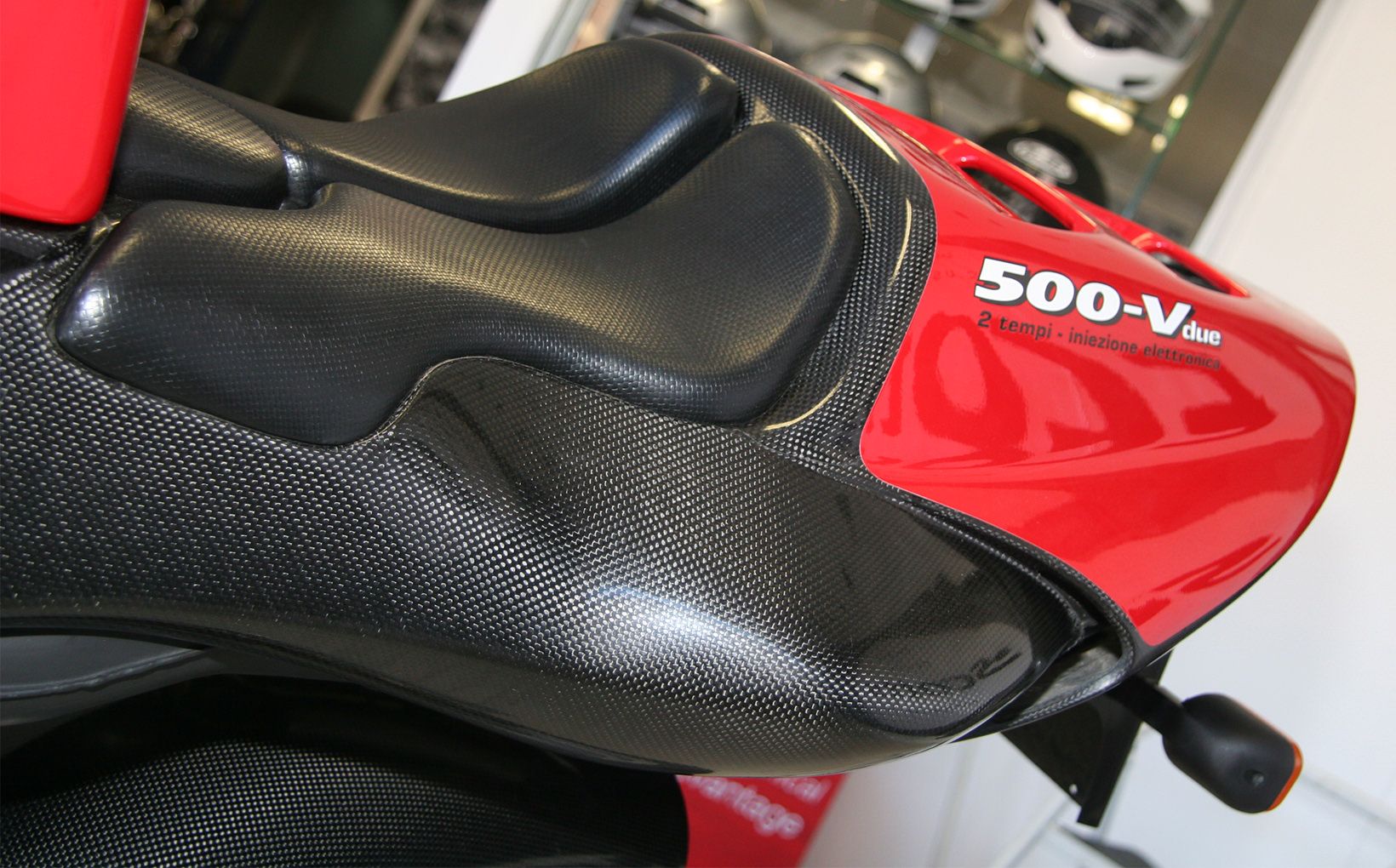 When Trevor got his hands on the bike it had only done a handful of kilometres, even so, Trevor being the man he is striped the bike and engine and rebuilt it, checking every tolerance, nut and bolt as he went – the end result is absolutely spectacular… 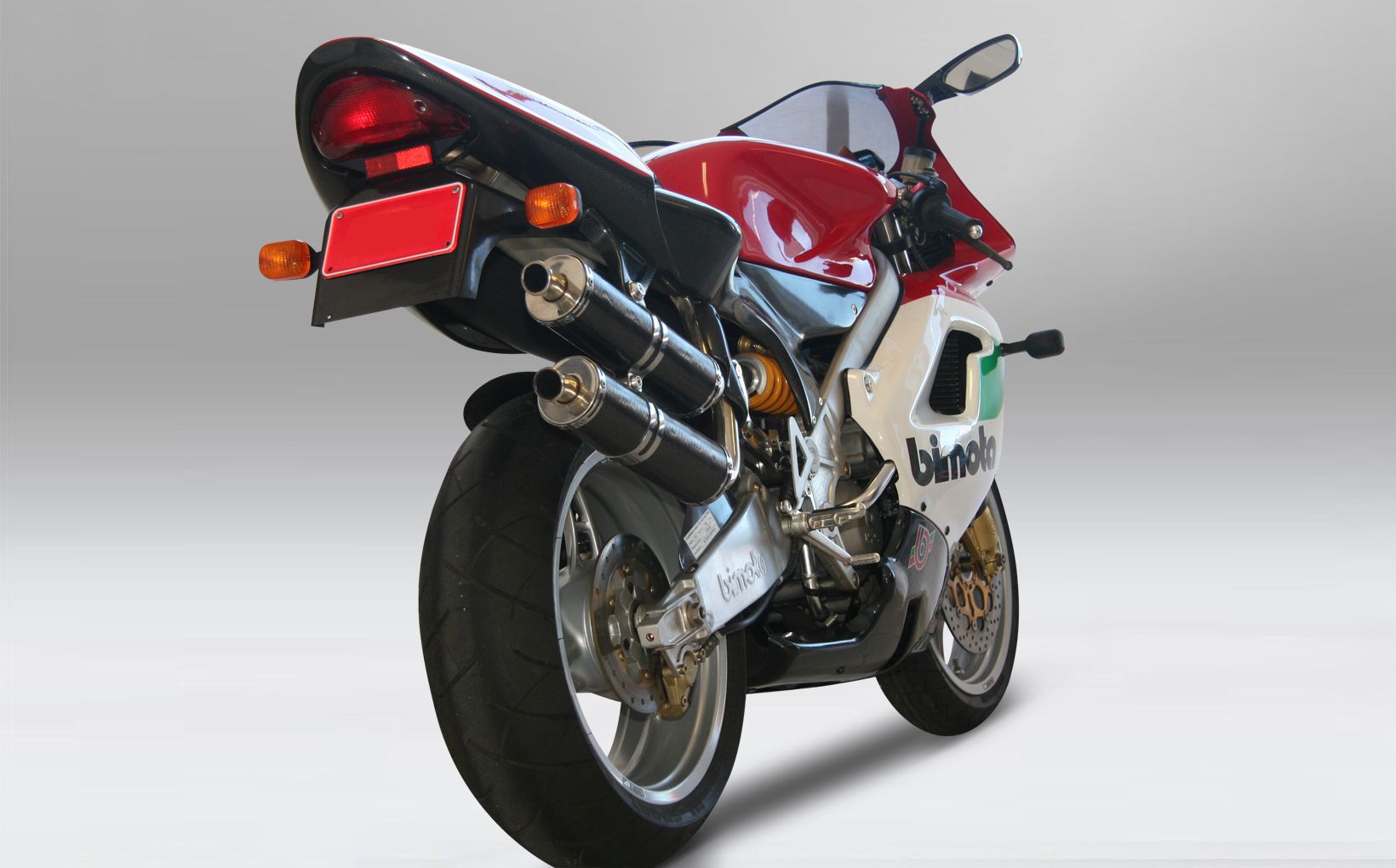 With a top speed of 265km/h and a weight of just 164kg wet, the V-Due was incredible for the era.