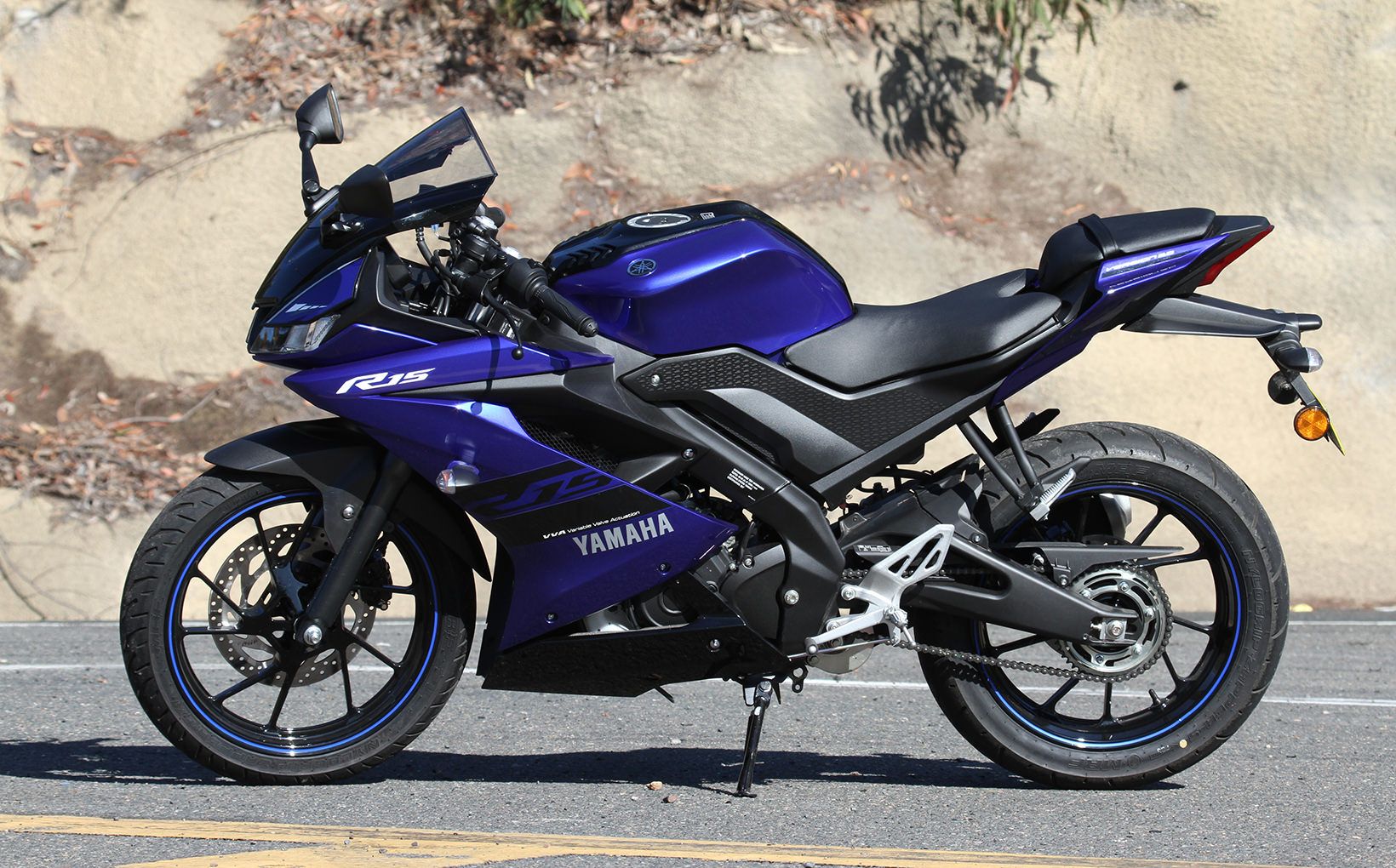 The YZF-R15 has been heavily updated for 2020, including with variable valve actuation, more cc and a slipper clutch.

At first I wasn’t entirely excited at the thought of my 197cm, 90kg frame straddling the tiny learner bike that is raced by 11-year-olds. I’ve been compared many a time to a monkey riding a mini bike on a few of the smaller testers I’ve ridden, so I didn’t think it would be anything out of the norm again. However, my first run on the R15 was fantastic and proved me wrong. 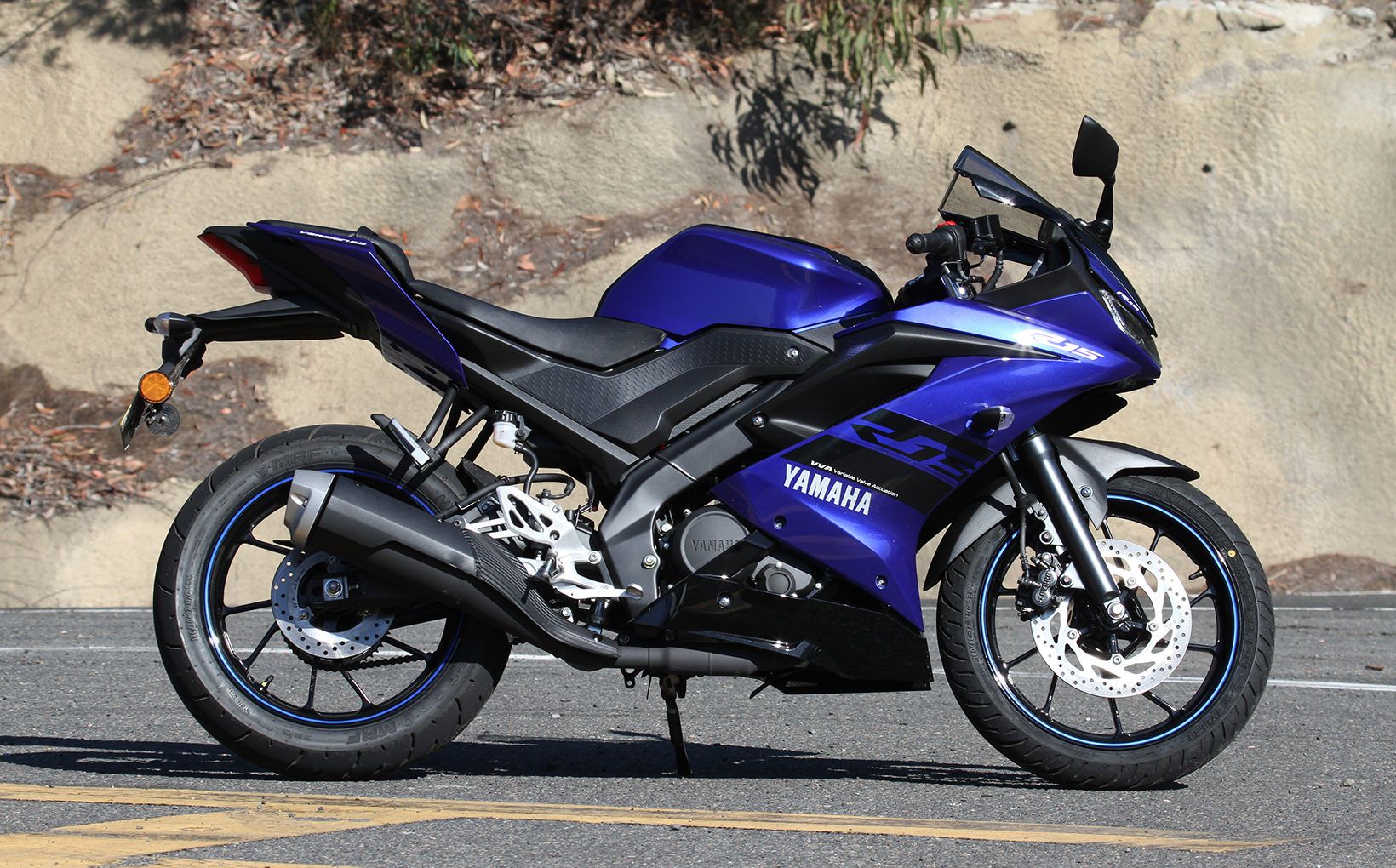 First of all, in the flesh, the bike looks as sporty, aggressive, and mean as its older brothers in the R-series. We were lucky enough to receive the Racing Blue colour (also available in Thunder Grey) and I was not at all disappointed. To start, the riding position for a taller rider is very comfortable.

The bike still allows for an upright position for the beginner riders when required, but the shape of the fuel tank allows you to tuck in nicely when pushing a little harder, really a perfect in-between for a LAMS bike to allow the rider to get a taste of both styles of riding, sports and commuting duties. 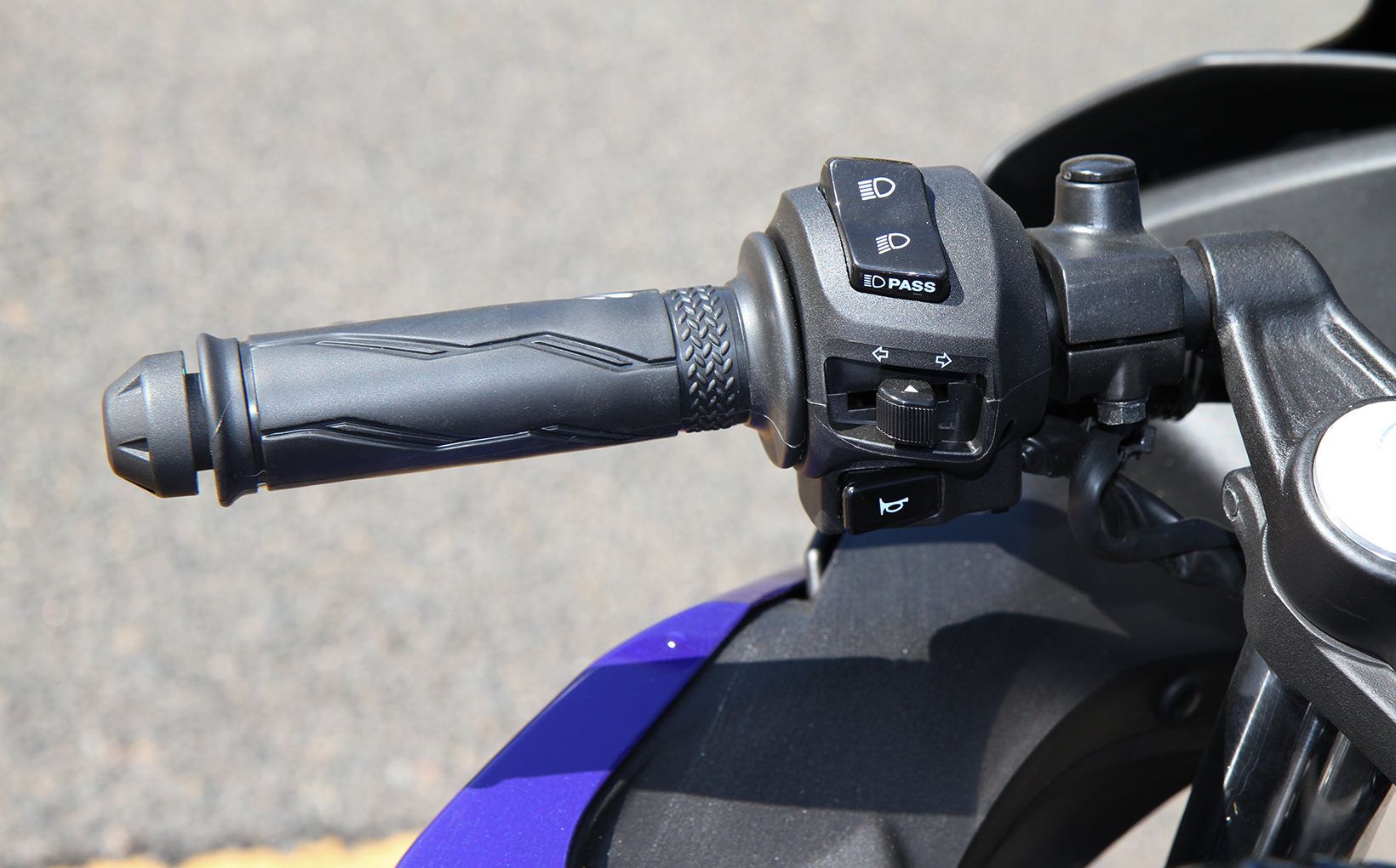 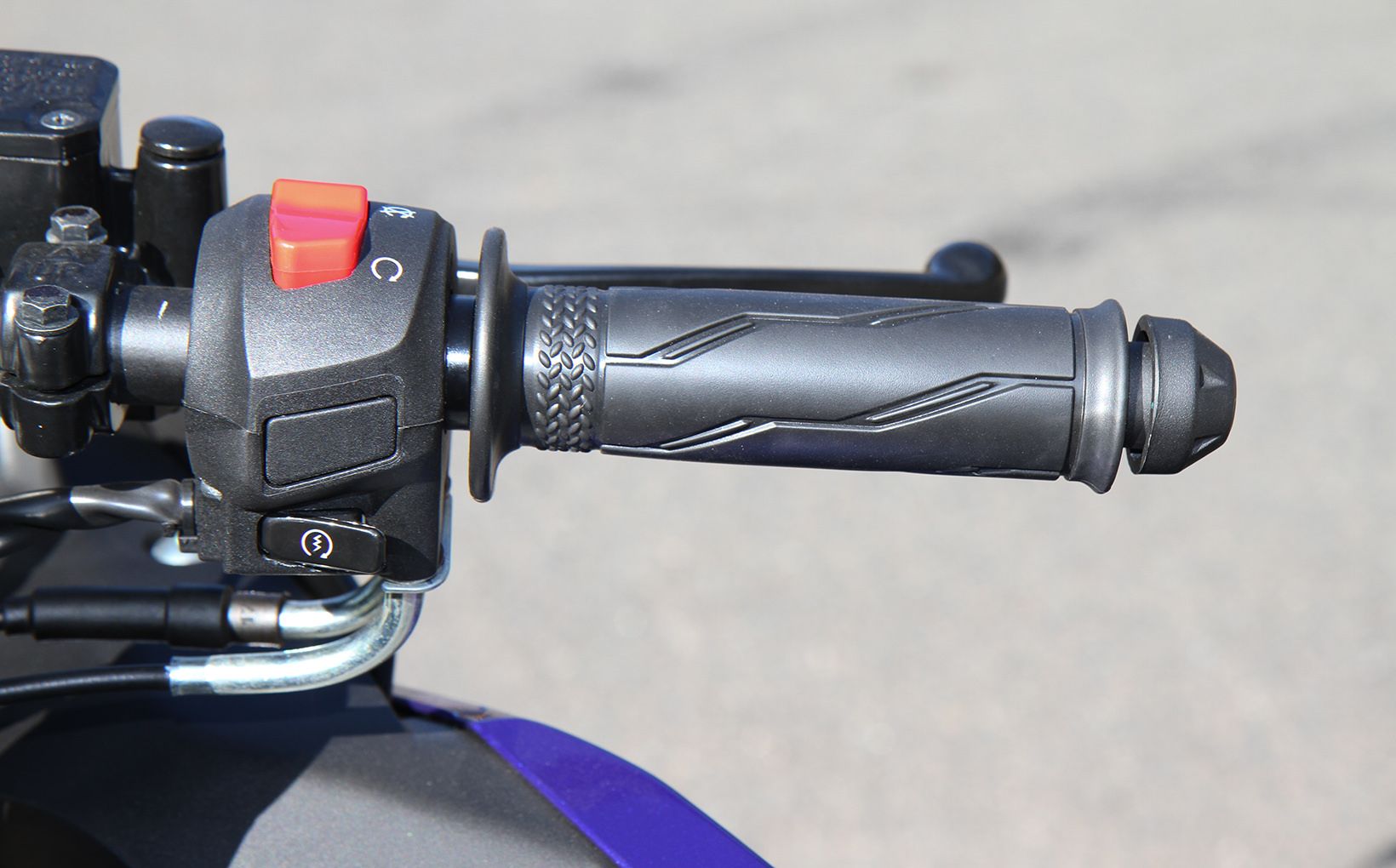 Fuel injection is well mapped for a smooth throttle.

The multi-function LCD dash is enough for any rider, beginner or advanced, and good for the price point. Speed, gear and rpm is easily visible in all light conditions, while the shift light is a fun little added extra for those looking to wind out the mean little VVA 155cc — which I’ll get to very shortly – and handy on track for the racers. 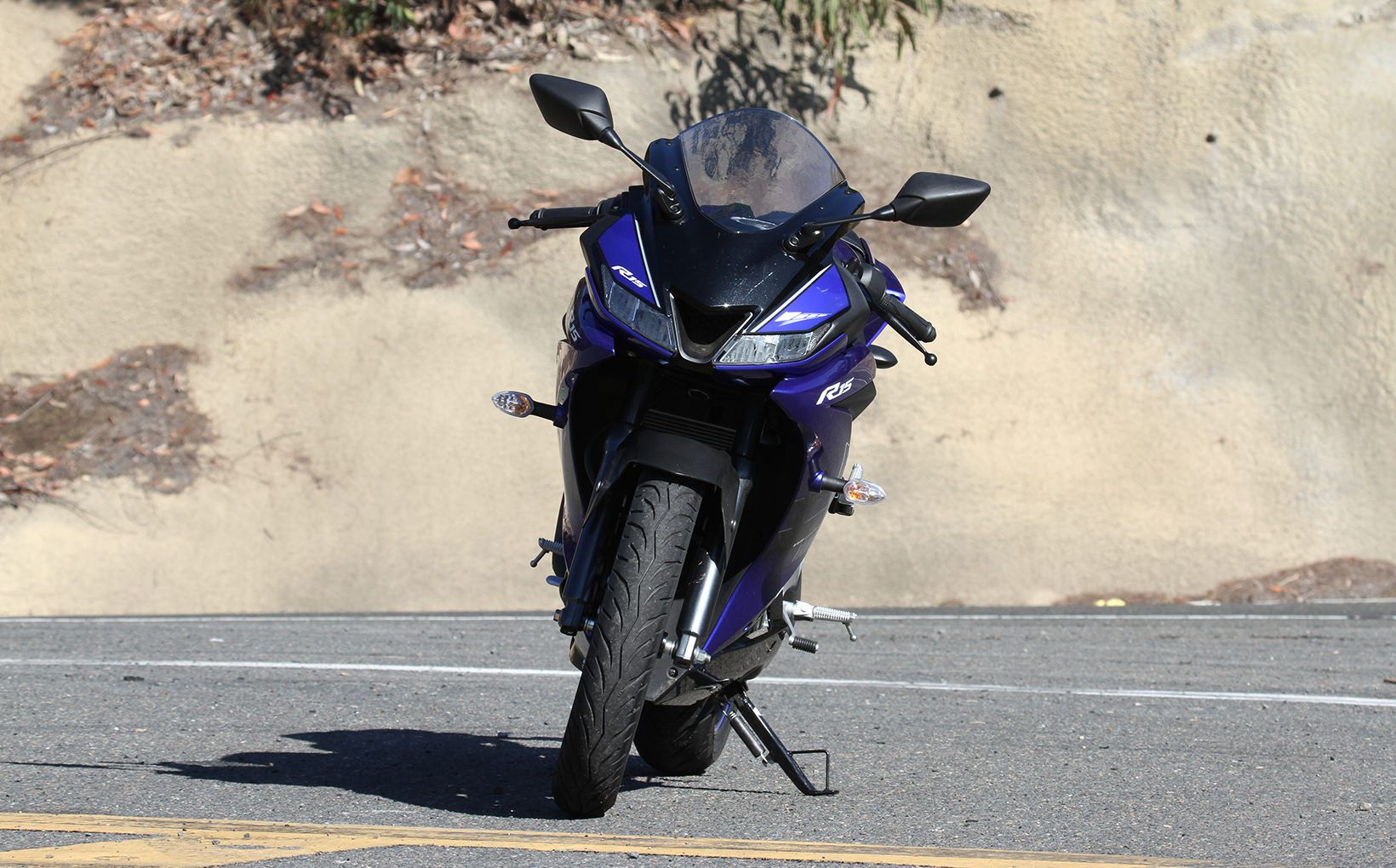 Starting with one of the most important aspects of any LAMS approved bike, the brakes. I’m satisfied with how well the little bike pulls up, especially with a heavier rider. The updated, 15mm larger 282mm front rotor and twin-piston floating caliper set-up is basic but it holds up nicely on the heavier braking, has good feel in the daily riding and even trail braking throughout some of the tighter runs we did.

The brakes feel just right for a bike of that size and speed and don’t have too much intimidating bite for a LAMS rider. The rear is a little softer than I prefer, however, being a learner motorcycle this is very well suited for those gaining experience. I’m not sure how the brakes would handle the track though… There is no ABS, but it would be a nice feature in the future.

In terms of steering and suspension, this is where the YZF-R15 comes to life, without a doubt my favourite aspect of the bike. After my first ride, I couldn’t believe how agile and nimble the bike felt. It just wants to lean over and be pushed that little bit harder each corner. It is set-up quite stiff, in fact really solid, most likely for proddie racing. 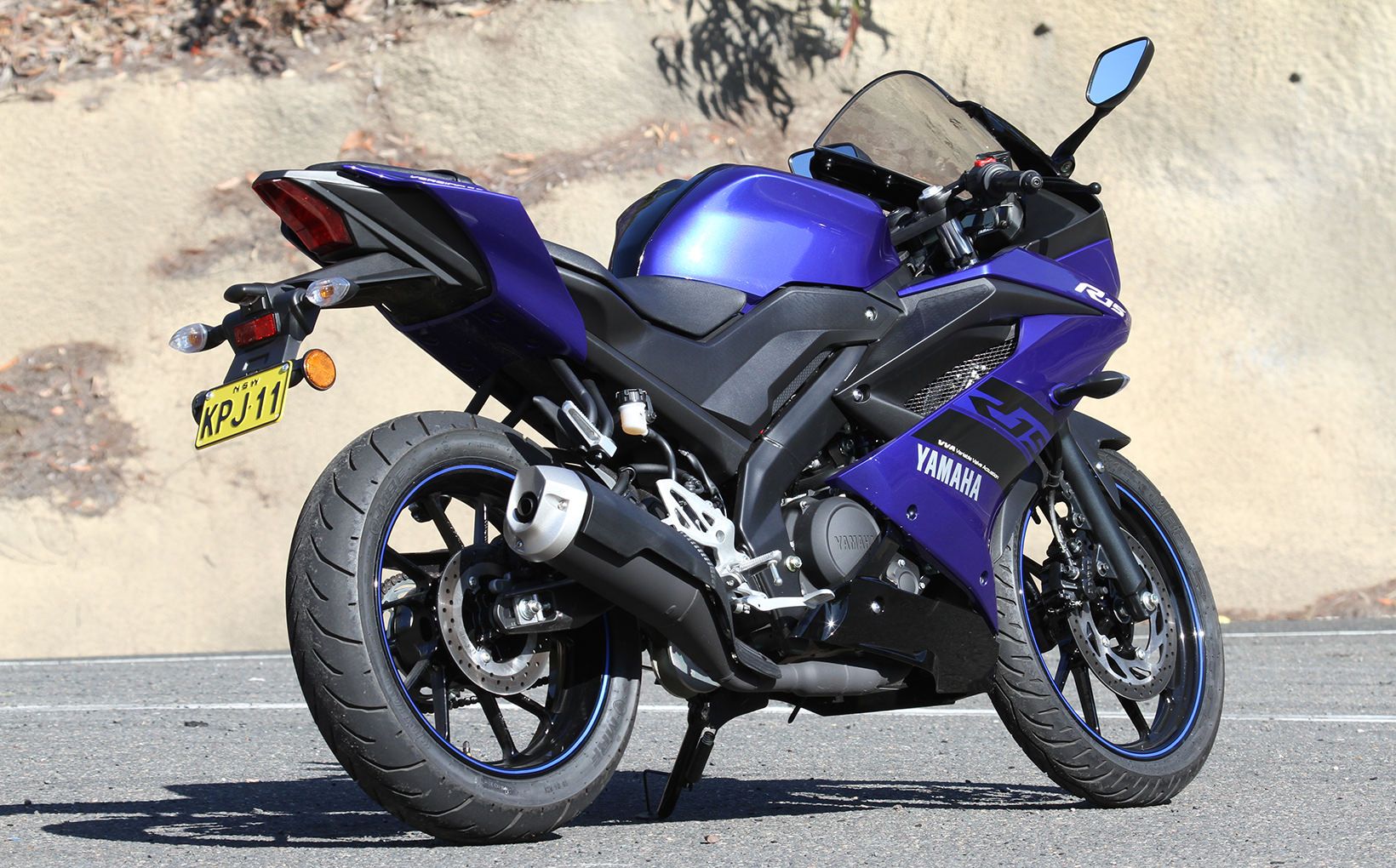 The R15 is the bike of choice for the Yamaha Oceania Junior Cup series, so it is no coincidence that the suspension is stiff and ride height tall.

This suited me at my weight, and only became uncomfortable on the bumpiest, longest rides. But the trade-off is razor-sharp steering and fast corner speeds, with no squat or running wide. Also lots of ground clearance and a real racy feel.

Harder steering and turning-in is great in my opinion and due to the smaller capacity motor you start to really focus on leaning and turning in and out of corners without the worry you’d have on a larger, faster motorcycle. Running the YZF-R15 through some of our regular rides it was clear why these bikes are chosen for production racing. They teach good corner speed and are a lot of fun, without being intimidating or too heavy to handle. 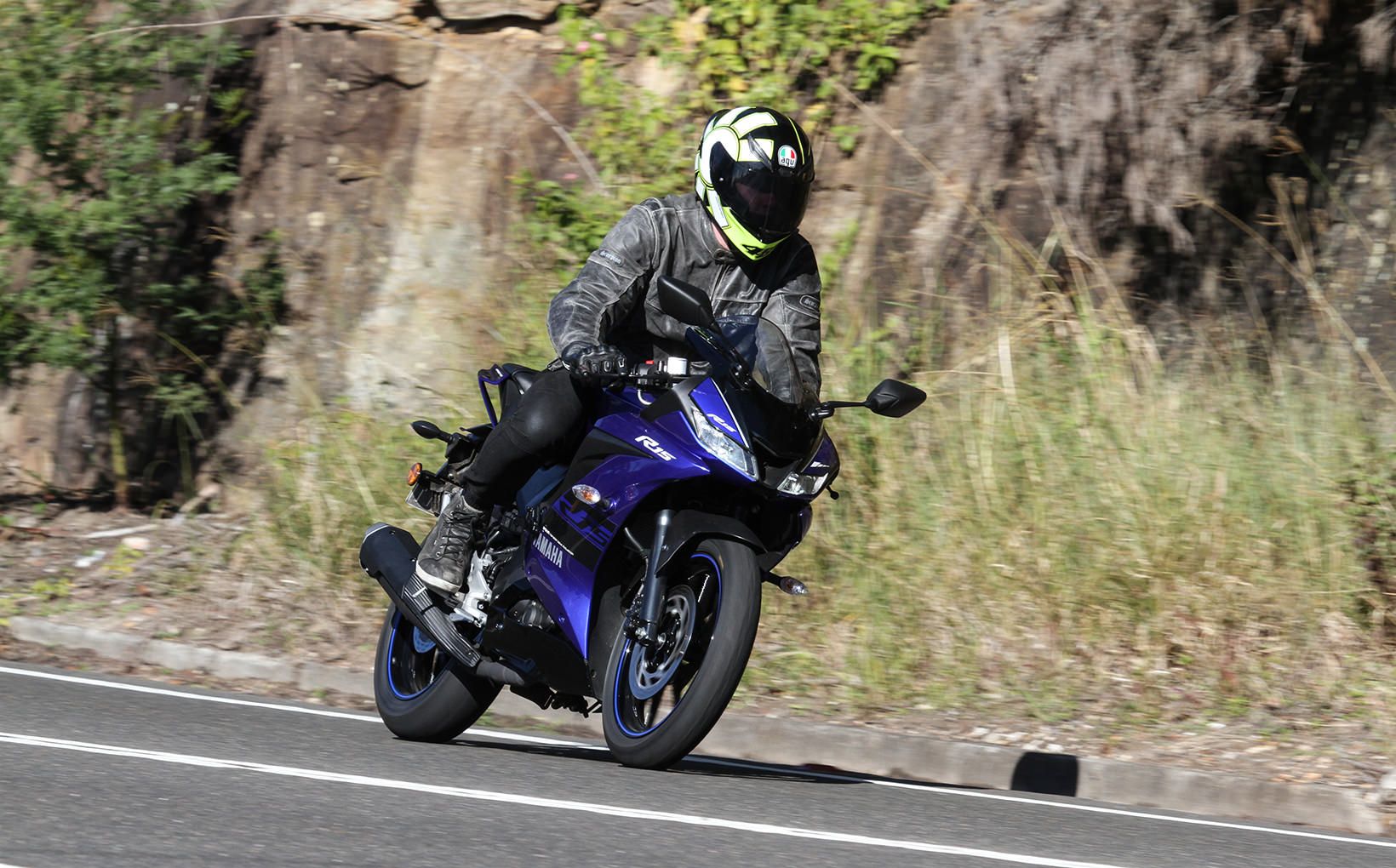 The R15 will teach a rider all about maintaining corner speed and engine rpm. .

Away from the hills and back to reality in town, running the bike as a commuter to work is perfect and I rode it around as my only transport for a fortnight. It’s tiny and can fit through almost any gap in traffic. It’s easy to park. It’s OK to pillion on short runs. It’s cheap to run and it’s fun even in traffic. The clutch action is smooth enough, side-stand easy to access but could have a bigger lug – and it has a steering lock. To be honest, as a commuter or weekender, I wouldn’t bother changing anything much…

Yamaha certainly did something right with the gearing on the R15. The six-speed ‘box ratios are great for what I wanted and expected out of the bike and the 155cc engine. First is punchy and torquey, allowing the bike to get ahead quite easily at the lights.

Sixth, to my surprise, is perfect for the freeway. Granted, I didn’t ride a whole lot on the freeway, but for the hour or so I did, in sixth I had the tiny bike sitting comfortably at 110km/h without feeling like it was about to rattle to pieces or needing a back-shift for passing. The engine and gearing combo works well. 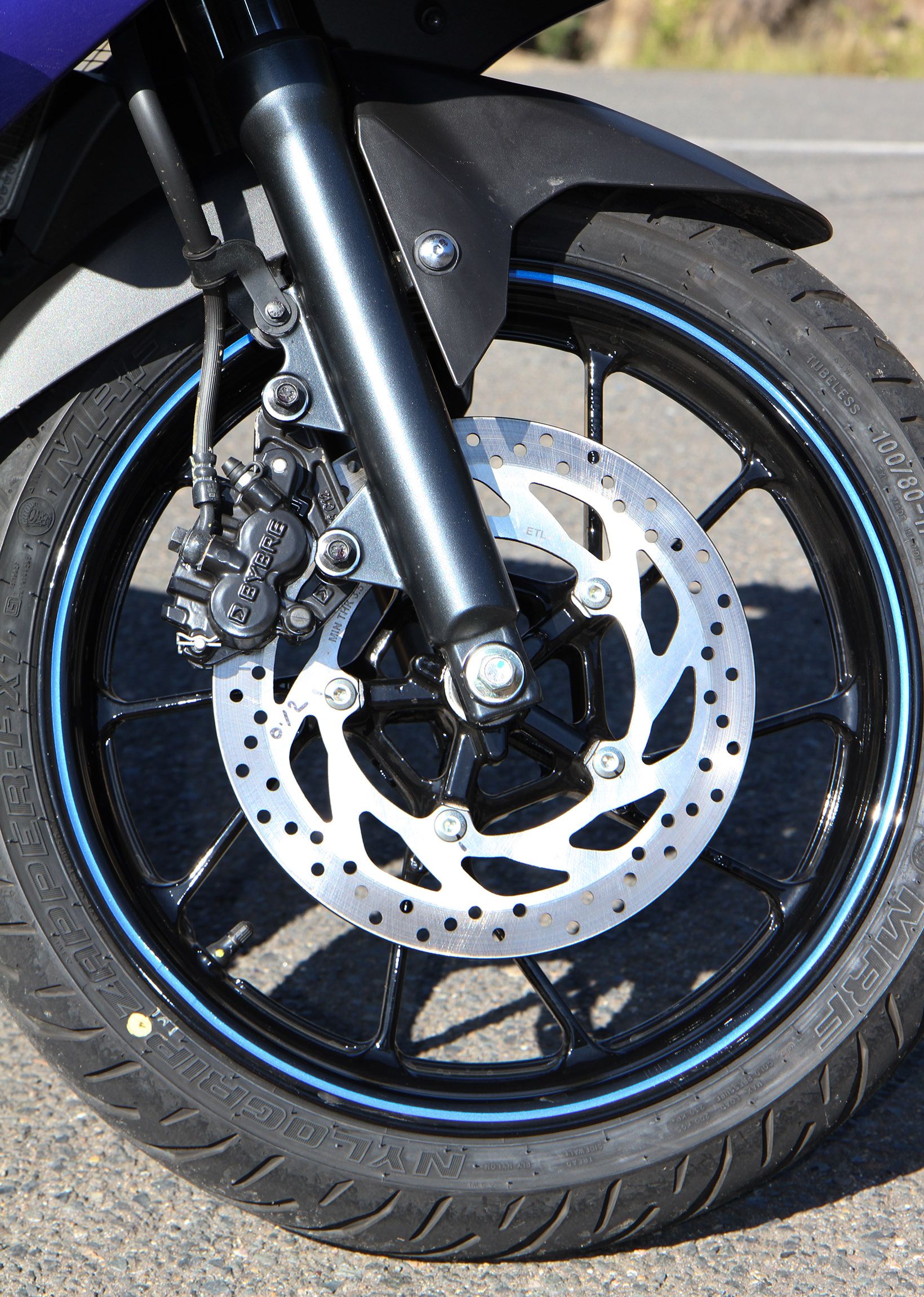 282mm single front rotor with two-piston caliper. OK for road riding. Unfortunatly there is no ABS. 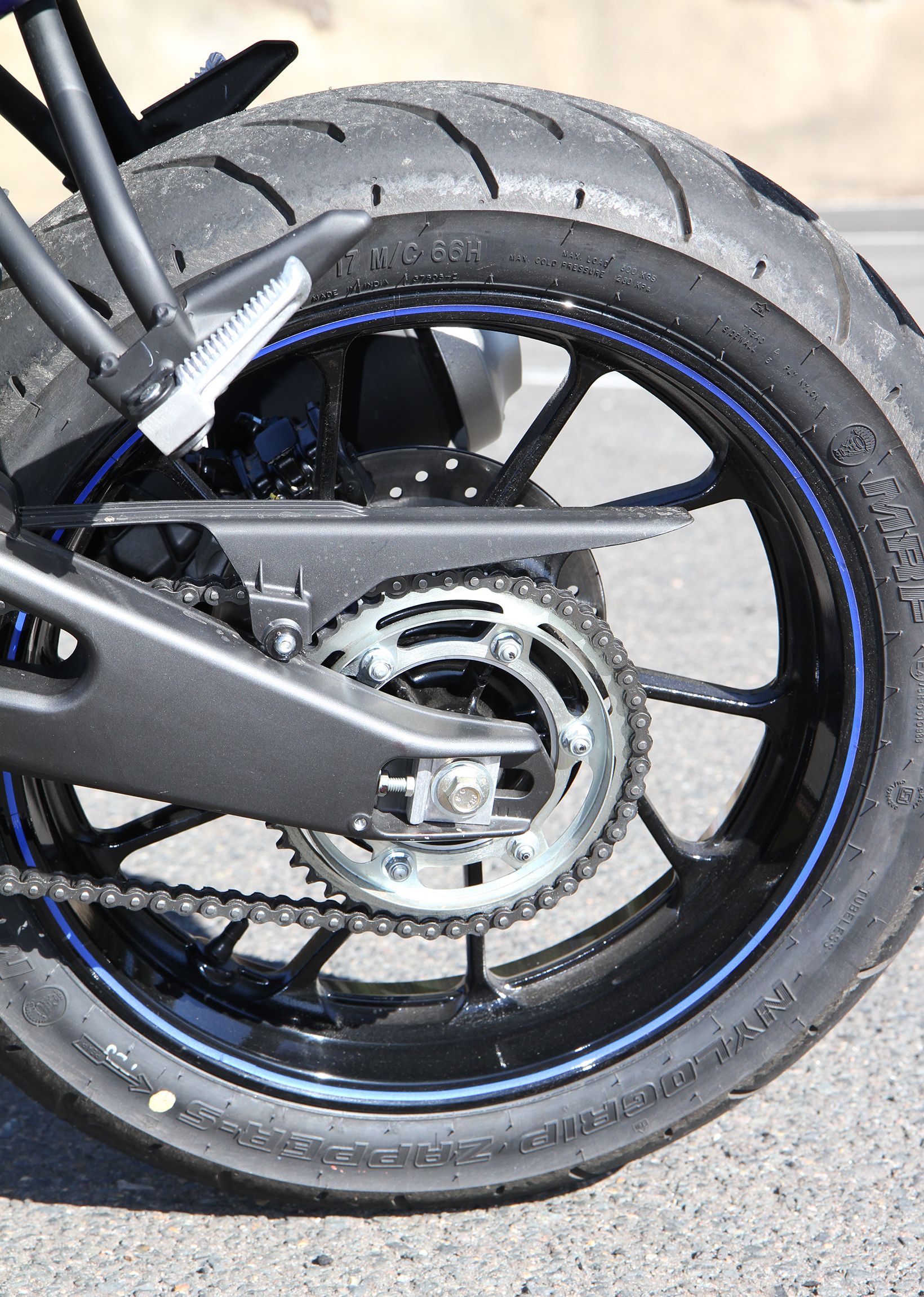 Budget tyres should be replaced with better rubber.

Moving on to the tyres, I’d look into something better than the Indian made Nylogrip Zapper-S hoops straight away. Buy a set of name brand decent rubber, it’s not worth running cheap tyres and risking a crash. They are not much good… I had the R15 out on a few rainy runs and experienced sliding in the rear even under conservative throttle and very little feel either end.

Finally, the angry little VVA 155cc SOHC engine. It’s not a powerhouse, it won’t rip your arms off (obviously) but it fits, and it fits well. One of the first things I noticed was that it felt like I was riding faster than I was. It’s torquey enough to have a little fun and powerful enough to keep up on the twisties with the bigger bikes with some effort and tactics. 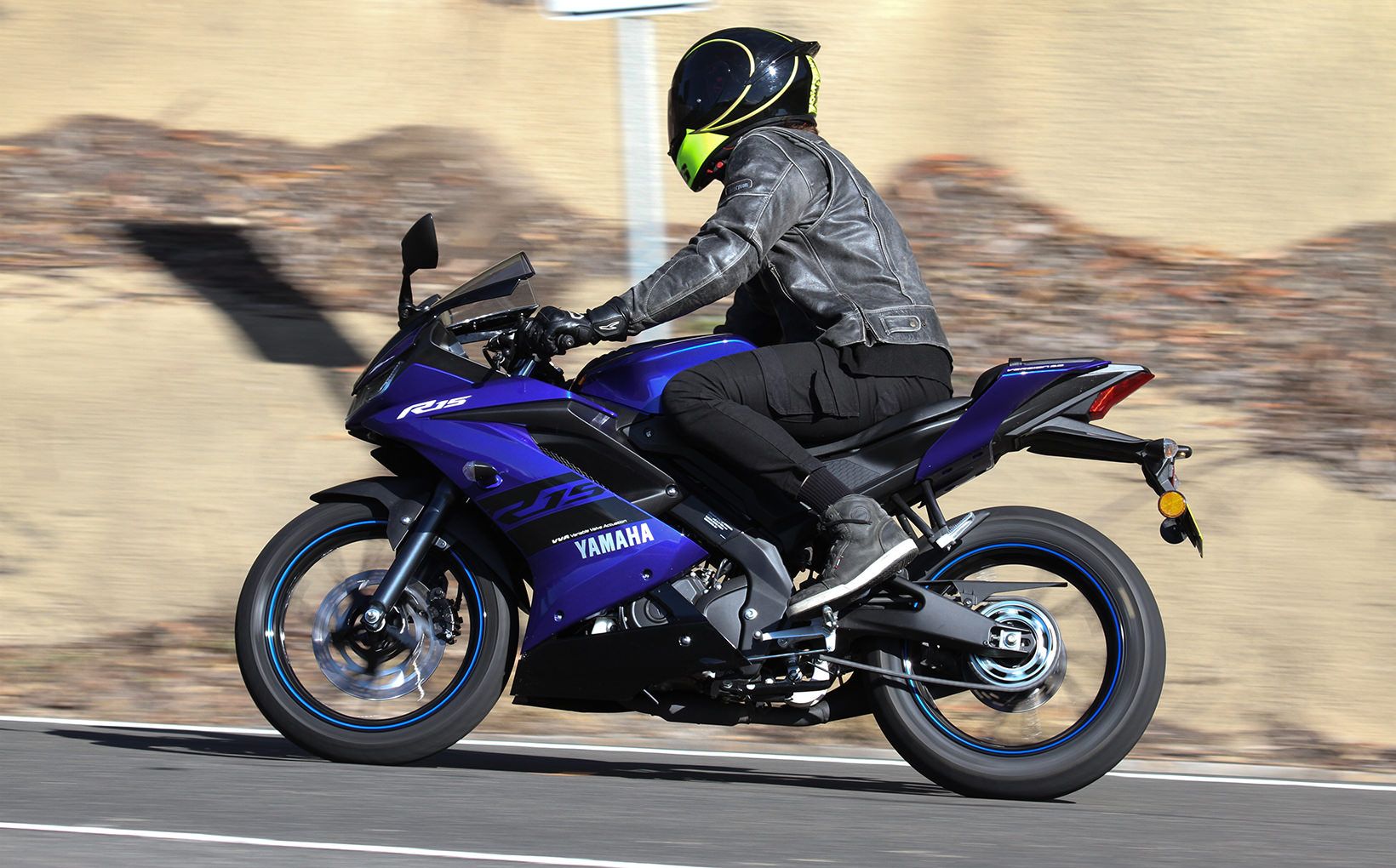 Gearing is tall and the little engine struggles to maintain speed on open freeways.

The VVA addition to the 2020 model means you have that high rpm power without sacrificing that low rpm torque. When the shift light flashes for the next gear, you know the solenoid has earlier flicked the cams over and you’re up into performance mode. It’s just so much fun! The stock exhaust sounds exactly as you’d assume out of a little 155cc. With a nice upgrade, you’d probably get a louder note out of it, especially at the higher rpm on the limiter!

With some extra effort and tactics on the YZF-R15 and you can keep up with bigger bikes through the mountains. It’s fun and rewarding. It will teach corner speed while being a handy Monday to Friday bike. 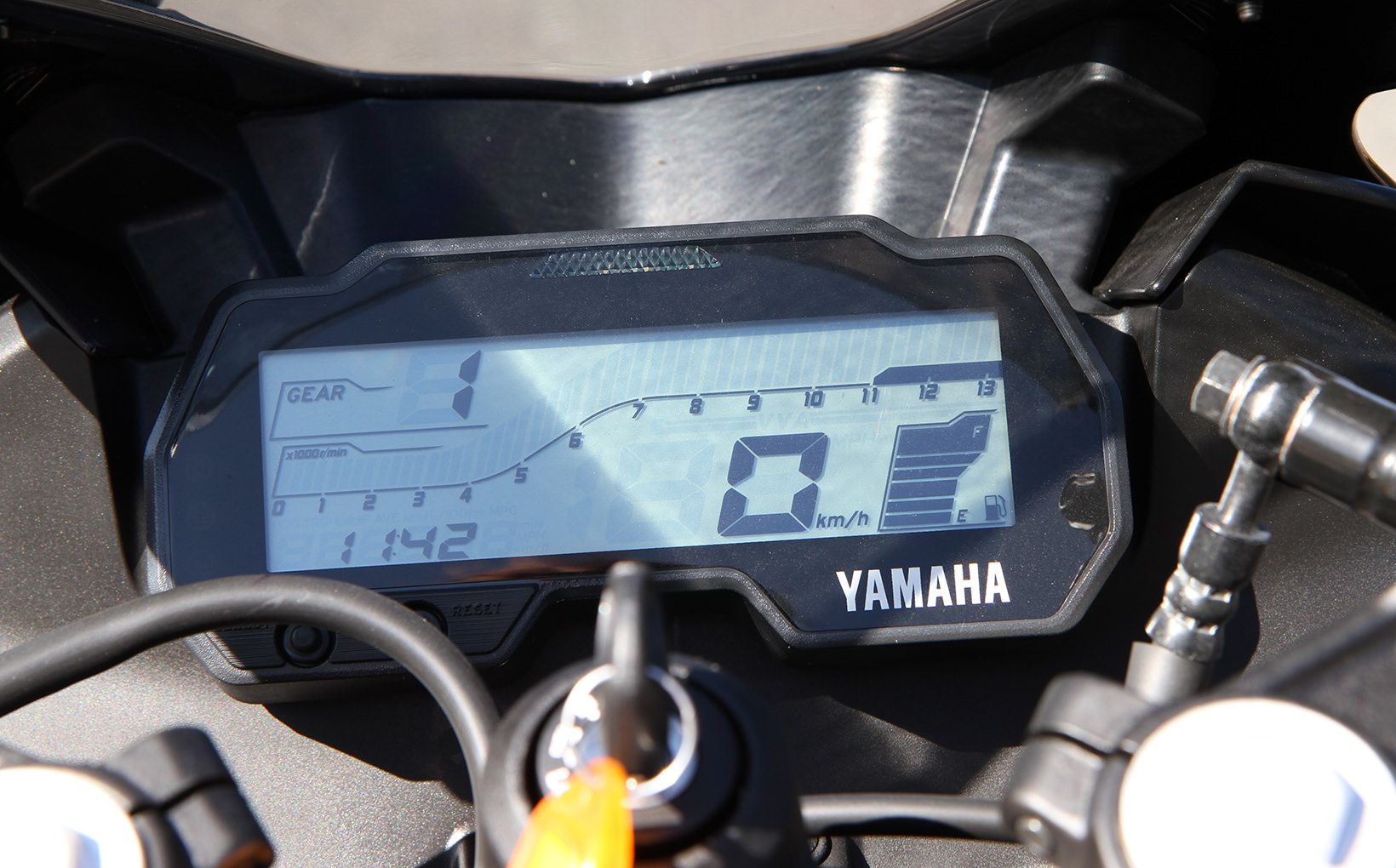 Living with the bike is easy enough. The LED headlights are very good, the horn too, all of the switchgear is standard and easy to use. The throttle and clutch and gearbox action are all refined enough to make the ride pleasant around town and easy to be smooth when upping the pace out of town. The mirrors are vibe free in most situations (but could be bigger for taller riders) and so are the ‘bars and ‘pegs.

The R15 starts easily every time and doesn’t run hot in the traffic. Most impressive, though, is the fuel consumption, which is incredible. Yamaha state a 450km range out of the tiny 11L tank. Even on the hardest of rides, the consumption barely changed on the bike, around the 40km/L mark!

Overall, I’m stoked to have had the YZF-R15 on test. I feel guilty about the low expectations I came in with. The bike shows where small LAMS bikes are at now. For such a low ride away price, any beginner rider can get a wicked piece of machinery that will allow them to get a taste of both city commuting and the open back roads. 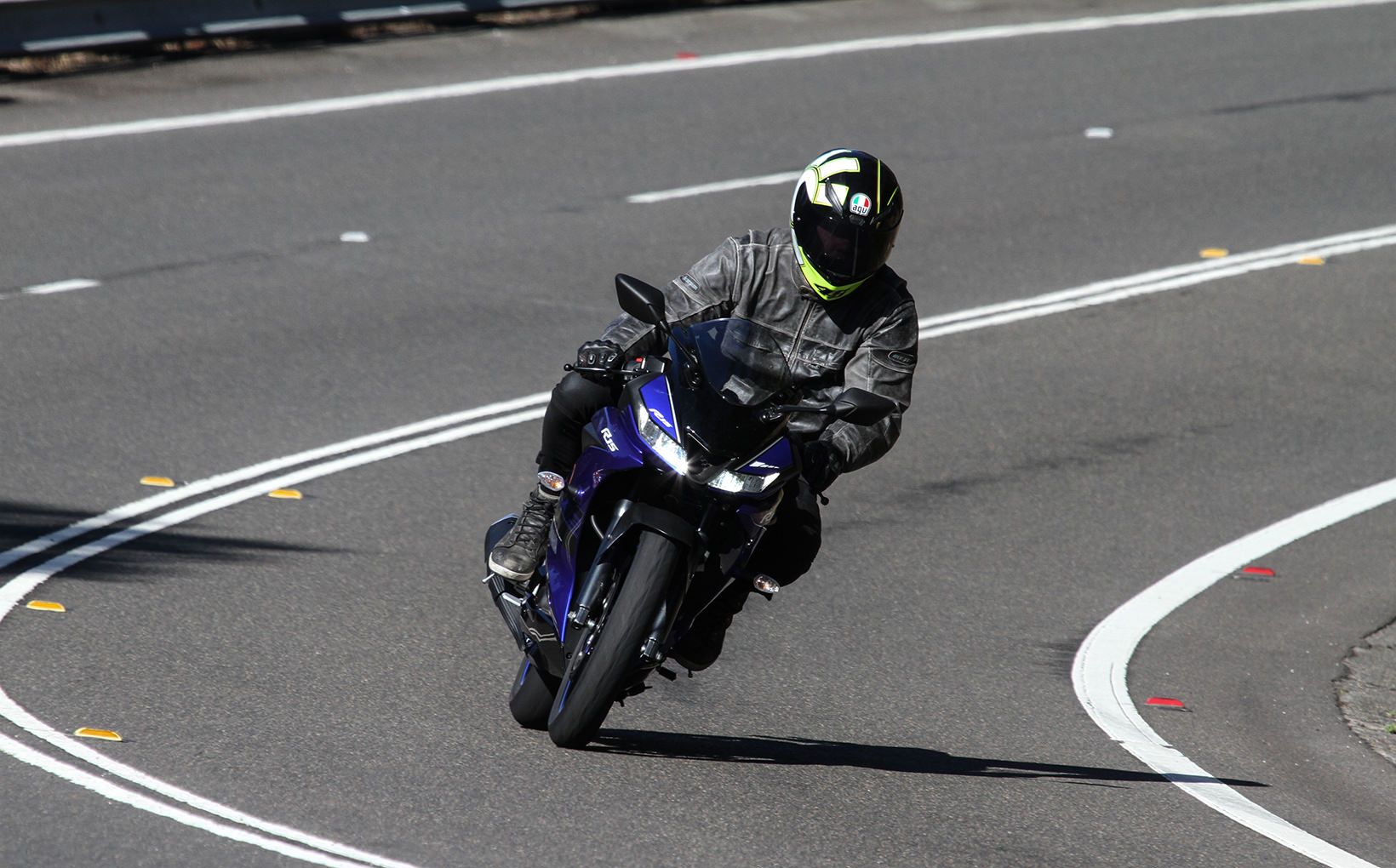 It’s obvious why they’re chosen for production racing, I’d race one if I had the chance! Yamaha has brought the aggressive, mean looking styling and performance of the big bore R-series, into a safe and accessible LAMS approved package. If you’re looking for a bike for the first time, looking to jump back on after a long time, or simply looking for a solid commuter that looks wicked, you can’t go past the YZF-R15, it is a class leader.

Now, can this 23-year-old sneak into the OJC for a few rounds? Someone let me know… 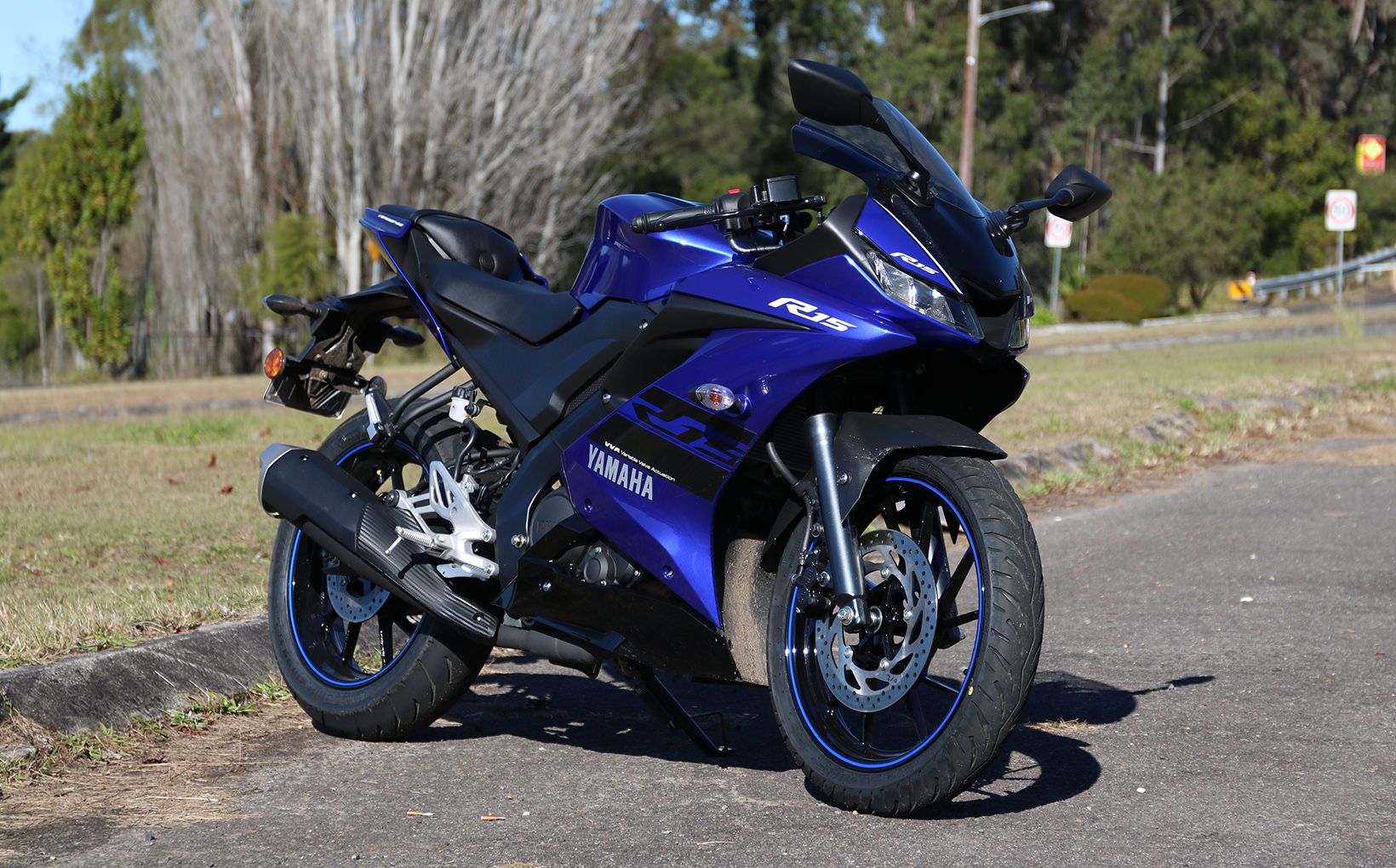 The YZF-R15 is available in Racing Blue or Thunder Grey.