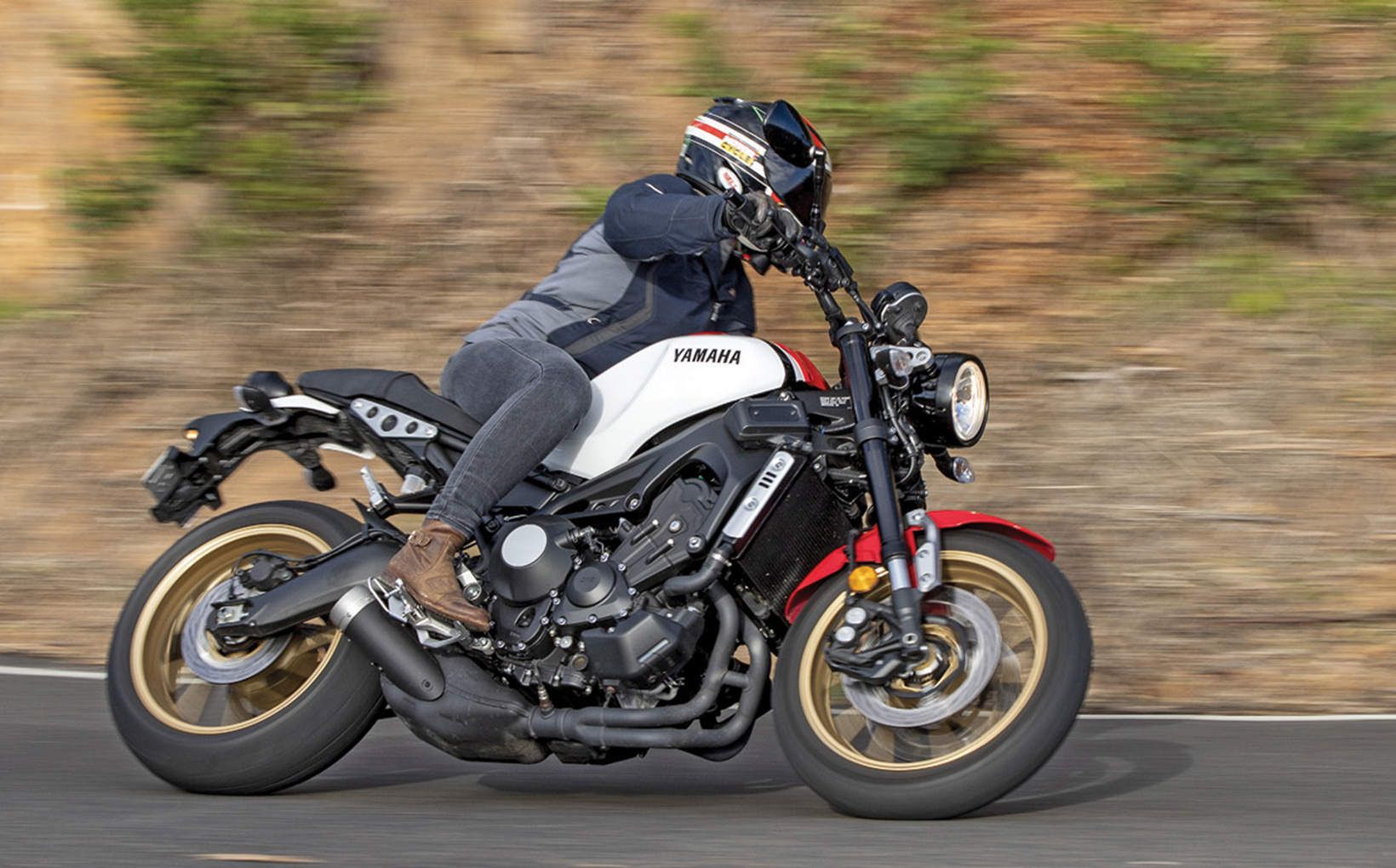 Do you reckon a bike can be so cheap that it prices itself out of the market? It’s one of a few answers I can come up with to a question that has been plaguing me since spending a couple of weeks on Yamaha’s XSR900.

Based on the hugely popular MT-09, the XSR is the gentleman’s version of the boy naked; it’s styling is far more sophisticated, it can boast nicer touches to both the fit and finish and, kind of importantly, you don’t see one every time you turn around.

So if the XSR900 is priced just $714 more than the fluro-wheeled bike, and if the neo-retro thing is all the rage, why hasn’t it enjoyed the same sort of showroom success as the bike it owes its entire engine, chassis and running gear packages to? 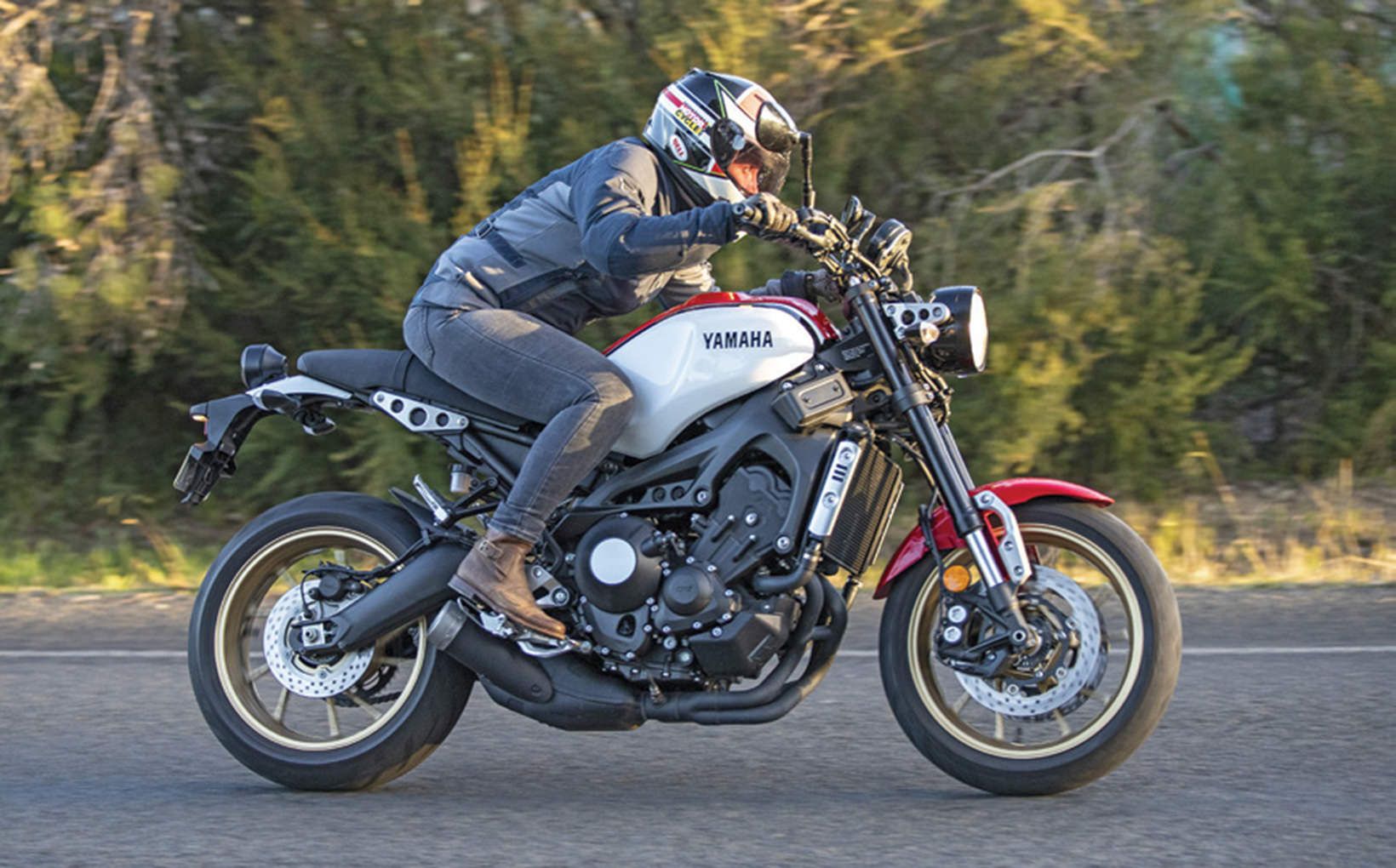 According to Yamaha Australia, it has only managed to entice one XSR buyer to every four MT-09 owners, or 25 percent of what the bike which nearly always features in the country’s top 10 best-selling nakedbikes sells, despite being an arguably a better-looking version of exactly the same thing.

For me, at least, the answer lays in one of two scenarios. It could be that the retro-style naked set want to handle all the custom-looking bits themselves; perhaps there’s a persuasion of purity that says if I’m good enough to want to ride a old-school bike then I should actually buy an old-school bike and customise it myself. And that’s great too, except you’ll probably end up spending somewhere near the XSR’s $13,259 price in time and I guarantee you’ll end up with half the bike this thing is. And that’s before we discuss the factory-backed warranty and zero kays on the clock. 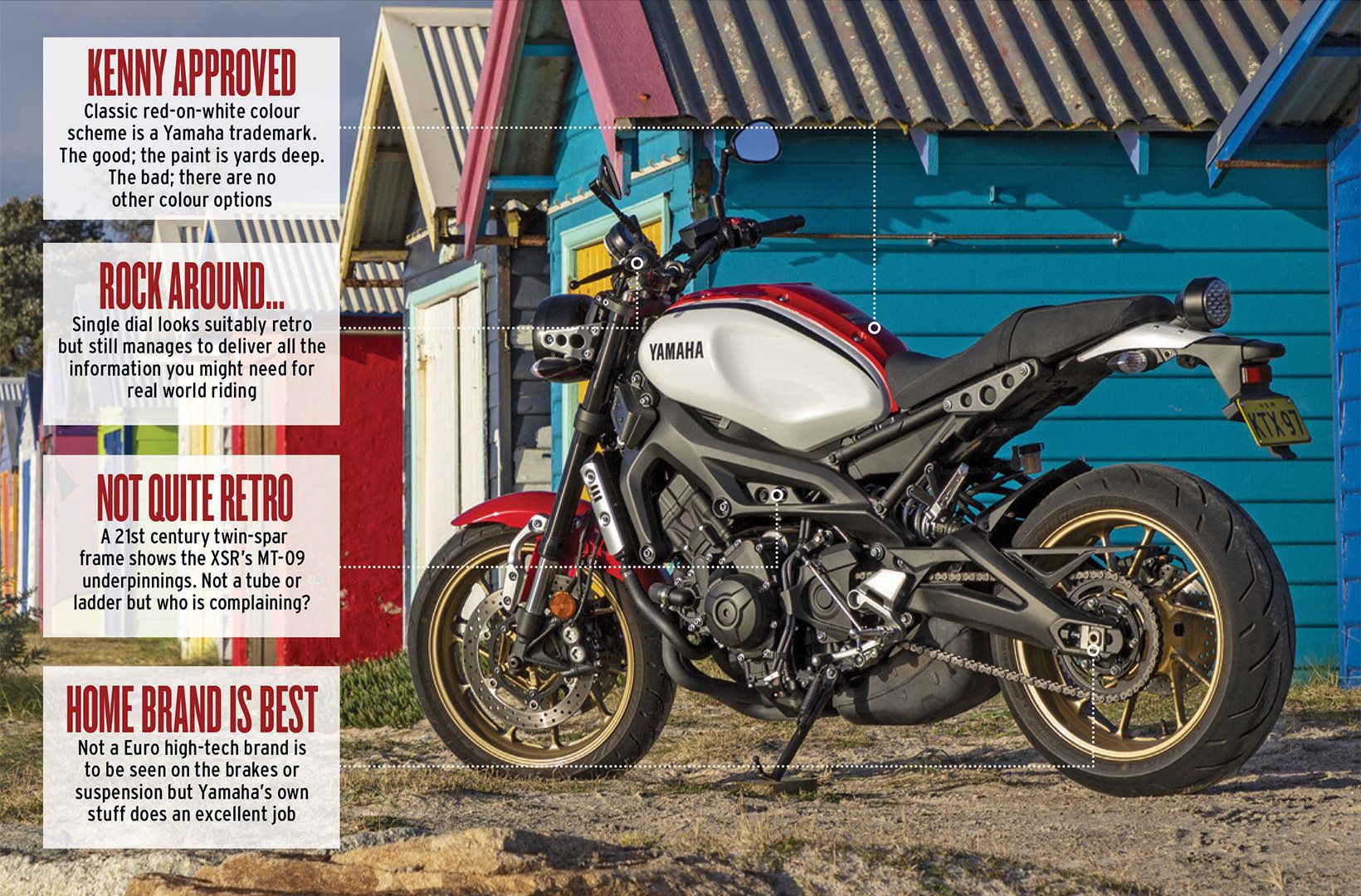 Handsome is as handsome does. The XSR is a fine all-rounder

But maybe the finished bike’s abilities don’t actually matter and I’m completely missing the point of an old-school custom? That may be true, but a few hours on the XSR reveals its very many and well-refined abilities, complete with convincing retro looks and a good glug of modern tech.

The other theory is its price in relation to its target audience. Where the MT-09 is aimed at a younger, fashion-conscious rider looking for an excellent price/performance ratio, the XSR might speak to a slightly more sophisticated or affluent rider, who perhaps has a budget which stretches a little further than the XSR’s asking price. 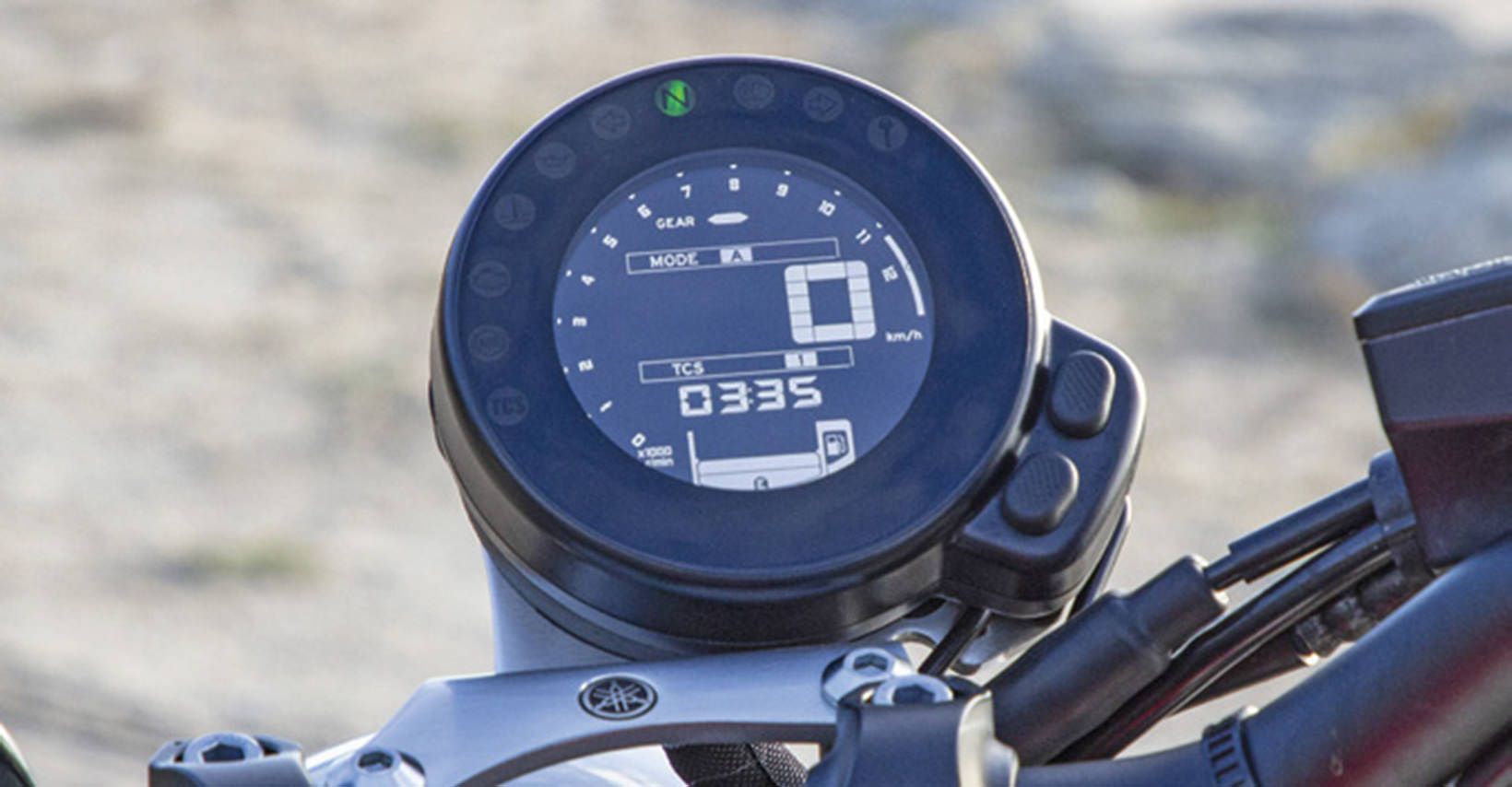 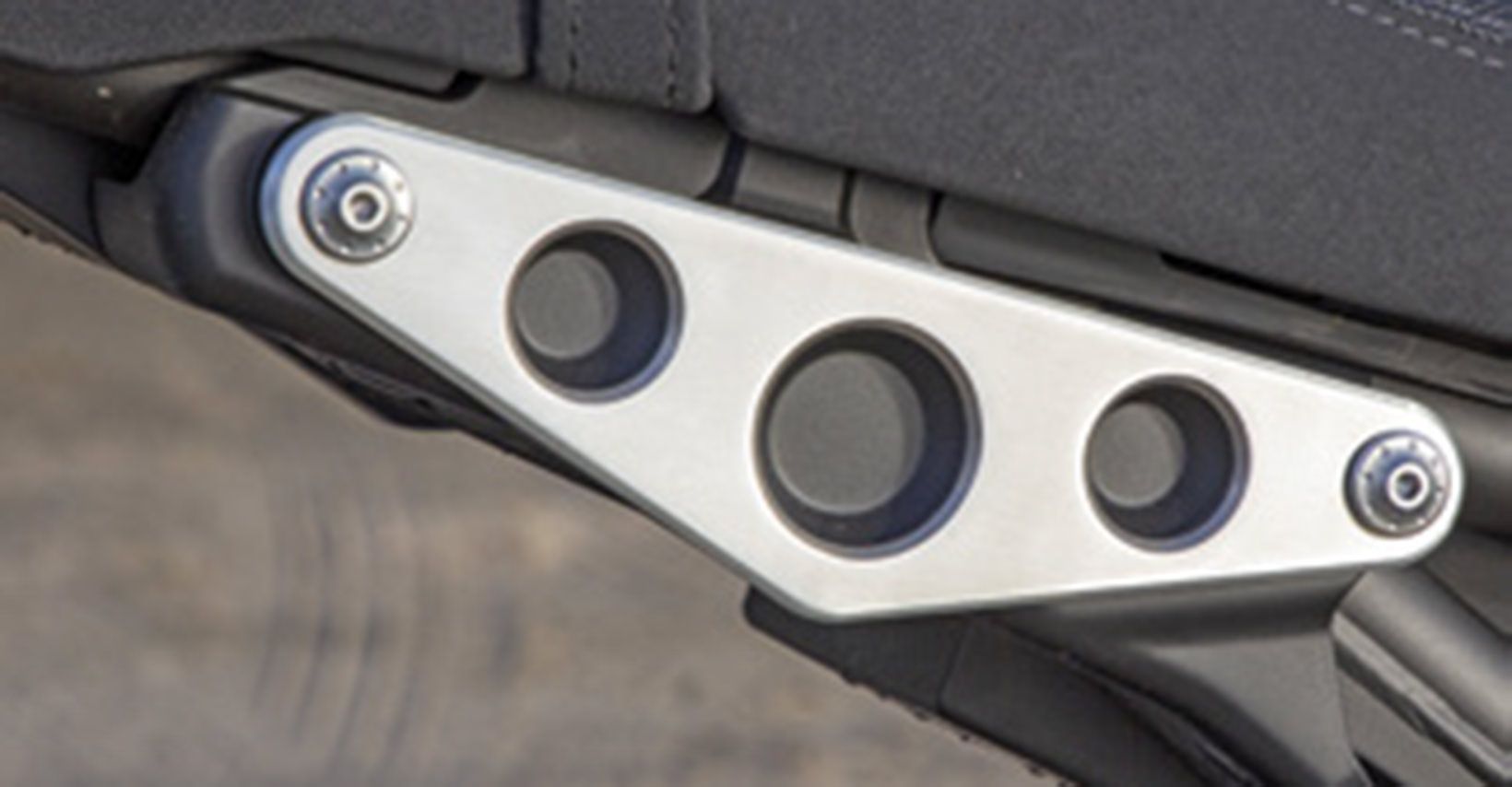 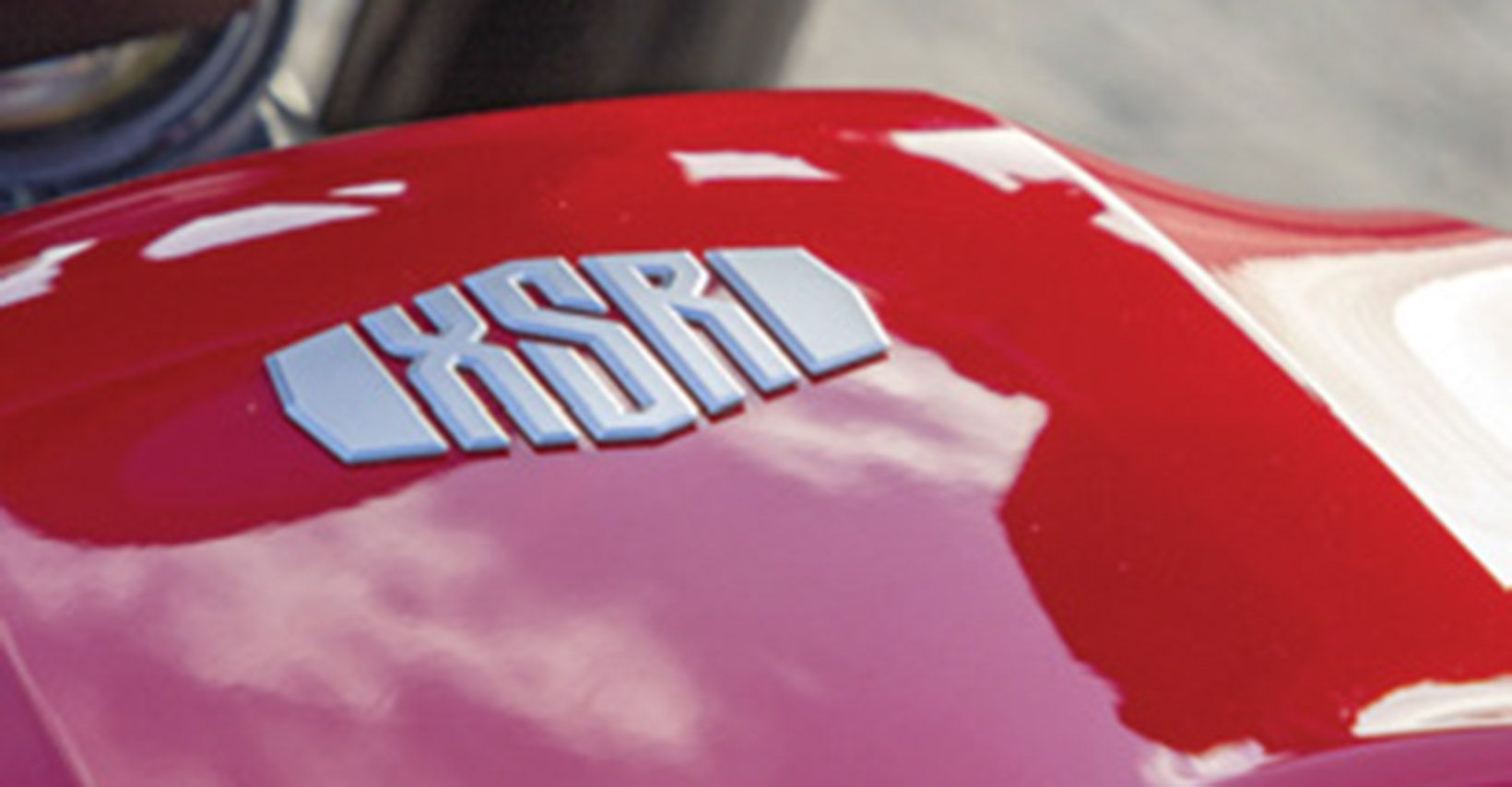 Because when a Kawasaki Z900RS or a Triumph Street Scrambler are asking around $3K more from a would-be modern retro owner, it makes the XSR900 really easily overlooked. So I can’t help but wonder, given the bike’s componentry, finish and on-road capabilities, that if it was priced just a smidgen higher, would it be a better representation of the machine and would it result in being better recognised in the buyer’s market?

We’ll probably never know, the thing has always been really great value. In fact, when Sam Maclachlan attended the bike’s Australian launch back in 2016, he called it “the bargain of the year”. And in the four years since, the bike’s recommended retail price has only risen by $260.

It’s powered by the firm’s 847cc triple-cylinder engine which is lively, dynamic and a hoot to use. Launched in 2016, three years after the MT-09, it meant that any of the first model’s flaws – like the poor fuelling which made that original throttle feel like a light switch – were well and truly sorted out by the time the neo-retro version swaggered onto the scene. 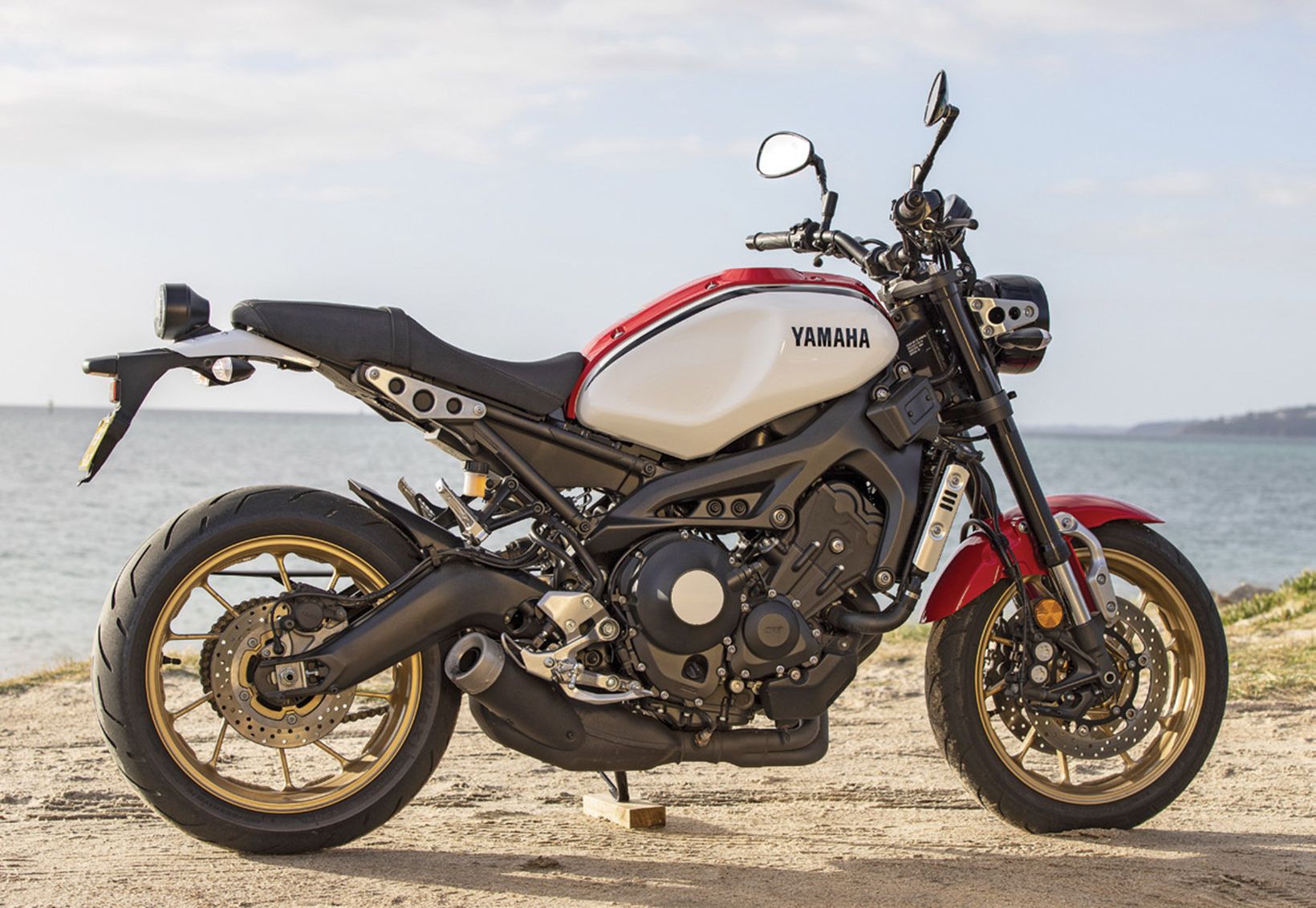 Good for 85kW at 10,000rpm, the peak torque of nearly 88Nm chimes in 1500rpm earlier at 8500rpm. And propelling a relatively light 195kg (fully fuelled) package, it makes for punchy acceleration which becomes addictive. And it’s complemented perfectly by its rousing and very un-Japanese triple-cylinder soundtrack.

The ride-by-wire throttle affords three switchable riding modes (A, Standard and B), but you very quickly work out A is snatchy, B is dull and Standard is just right, so you tend to leave it there and be done with it. If the roads do become greasy or wet, I found I was better off switching the three-way adjustable traction control (1, 2 or off) up to its most intrusive setting and using the predictable throttle response of the Standard mode to get the best results in sketchy conditions. You can’t do that on your modified CB750.

The no-name suspension is good, though given the bike’s price point, maybe great. Both the upside-down fork and rear monoshock feel a bit harsh at around-town speeds, but the handling the suspension provides once the pace quickens is well beyond what a $13k price point should be. It changes direction effortlessly and combined with the well developed chassis, and the mid-range punch, it’s a bike that can raise more than a few sportsbike riders eyebrows in the right hands. 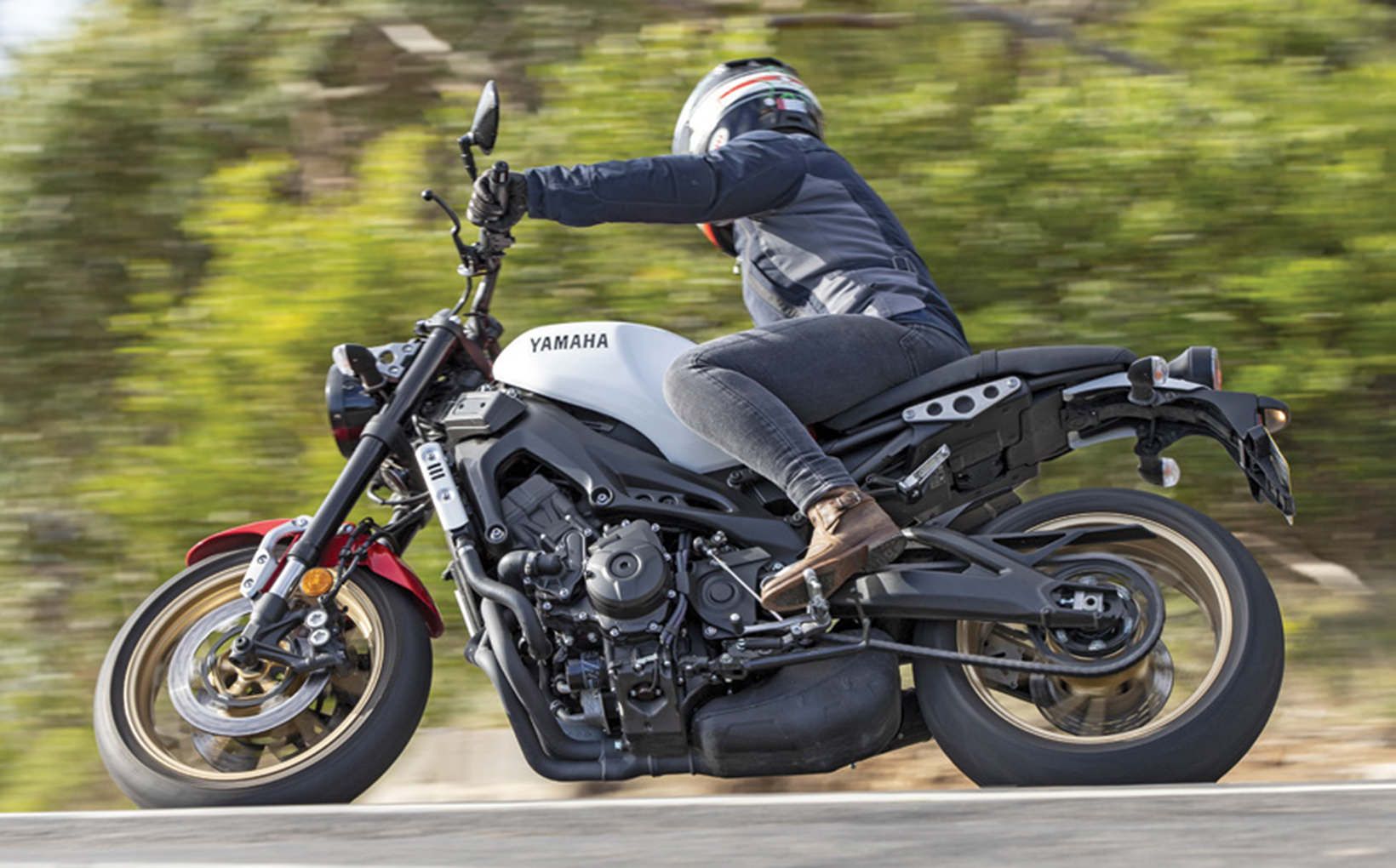 It’s a similar story with the XSR’s braking package. The mixture of not a lot of weight, ABS and really decent radial-mounted componentry makes for excellent and predictable braking with heaps of feel, with or without the flashy brand names.

Yamaha leaves the flashy stuff to the neo-retro styling, like the flashy gold-coloured aluminium alloy wheels which finish off that sophistication thing beautifully. Then there’s the brushed aluminium brackets; some serve a function, like the headlight and front guard mounts, while others, like the one bolted to the subframe, are just for show to tie the whole shebang together.

The old-school single headlight is mimicked by the single and proud circular taillight which polarised opinions (I like its uniqueness, if I’m honest, but given the MT versus the XSR sales figures, it seems buyers in this segment aren’t much into uniqueness). 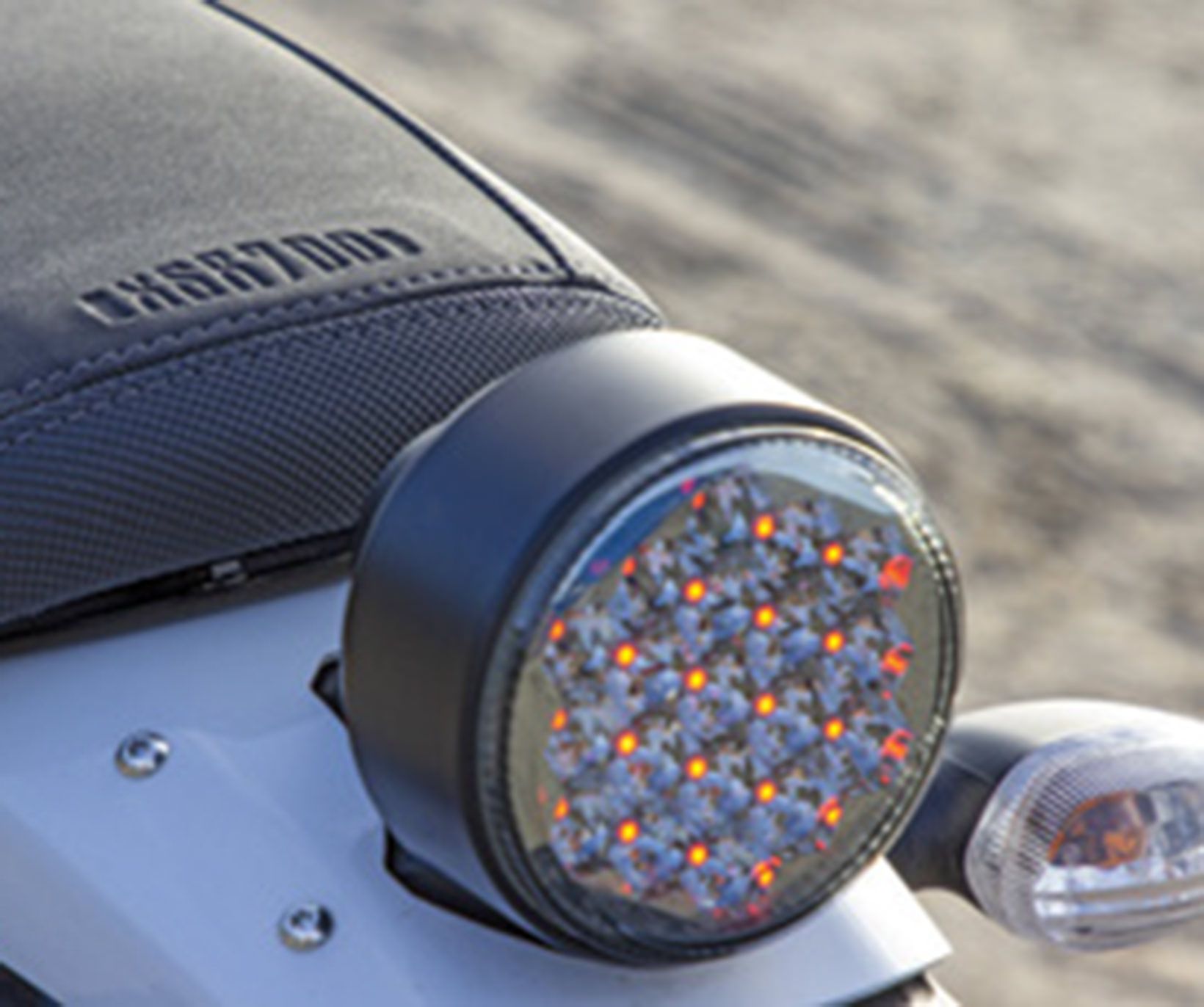 The round LED taillight is polarising (not polarised). We liked it 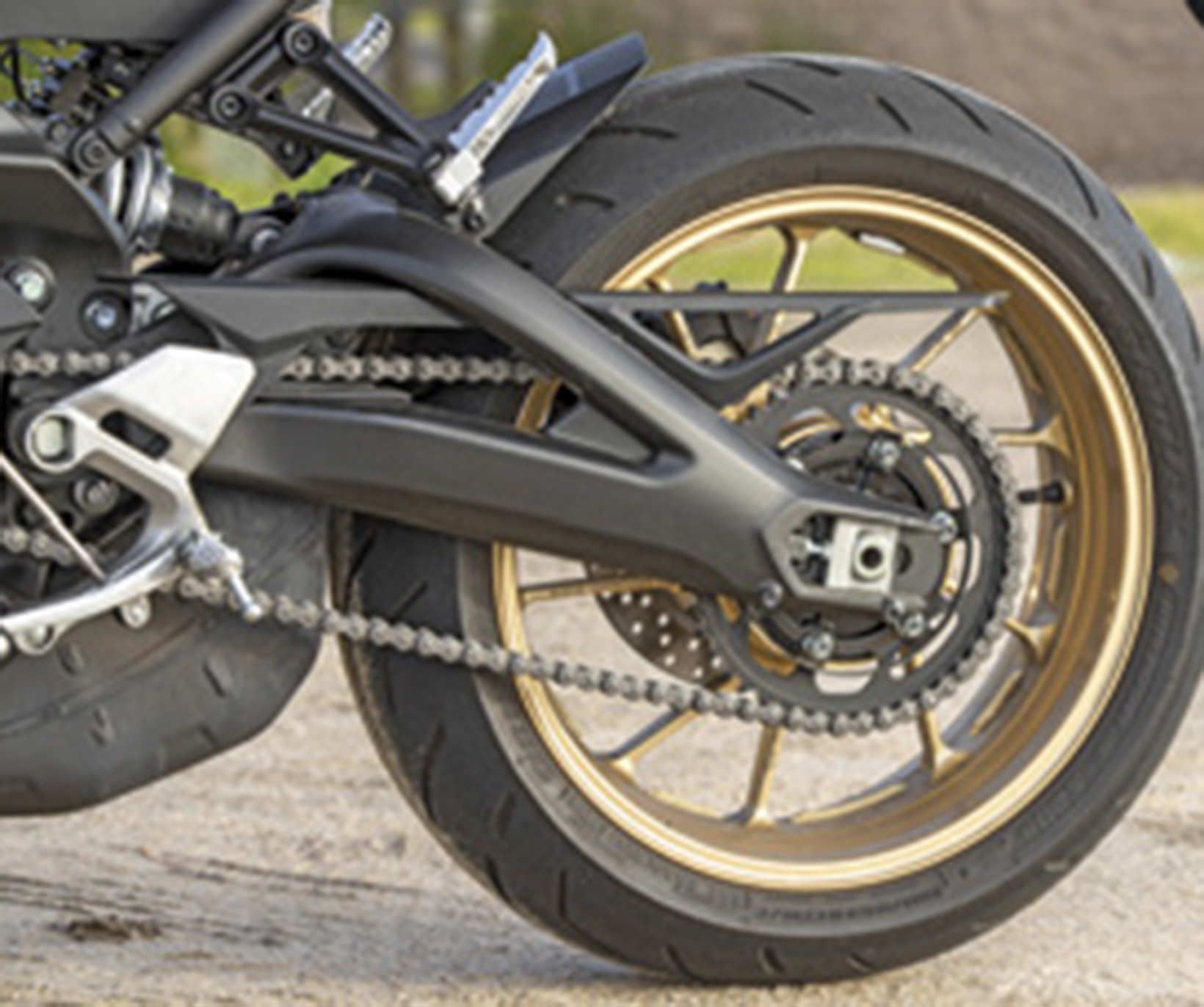 Suspension would be familiar to any MT-09 owner 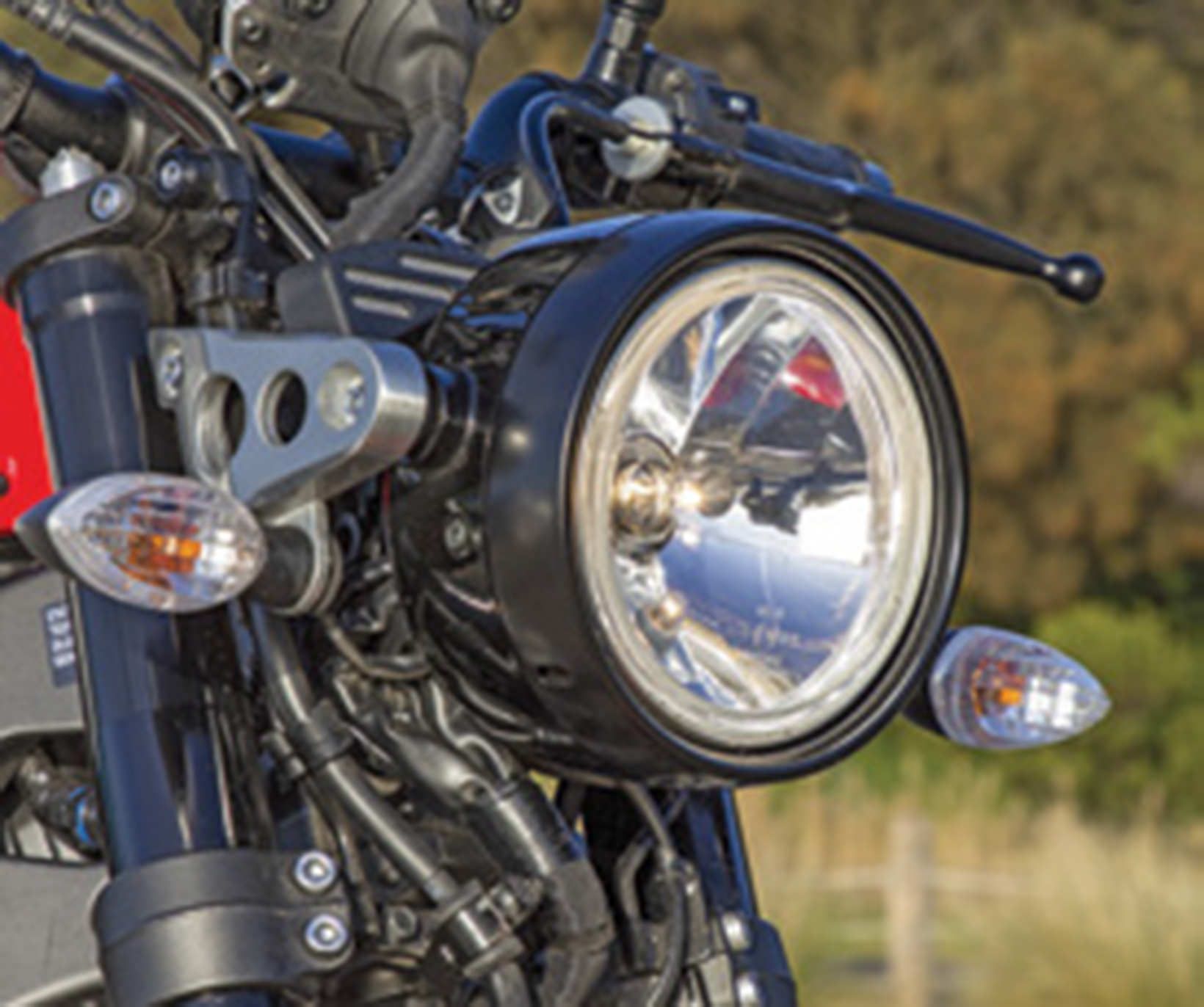 The other neat attention to detail is both the fuel-filler cap and the single circular dash are both off-set to the right of centre. It’s quirky, again rather un-Japanese, and I like it.

Despite being a singular unit, the dash is full of good info. Gear position, riding mode, traction setting, fuel gauge, engine and road speed are all displayed simultaneously in a surprisingly uncluttered manner. A couple of buttons mounted on the bottom right allows allows you to scroll through extra useful options like time, ambient temperature, fuel range, current and average consumption, two trip metres and the odometer. It’s simple to both see and use, and cleverly, both the mode and traction control selection toggles have their own independent buttons on the right-hand switchblock, so you’re not trying to scroll through the dash and select a setting with intermittent success.

I absolutely understand why the MT-09 has been a raging success for Yamaha. Our comparo between it and Kawasaki’s Z900 last issue (AMCN Vol 69 No 25) highlighted its performance to price ratio is about as good as it gets, and the dark and hoony styling speaks loudly to the market it’s aimed at. 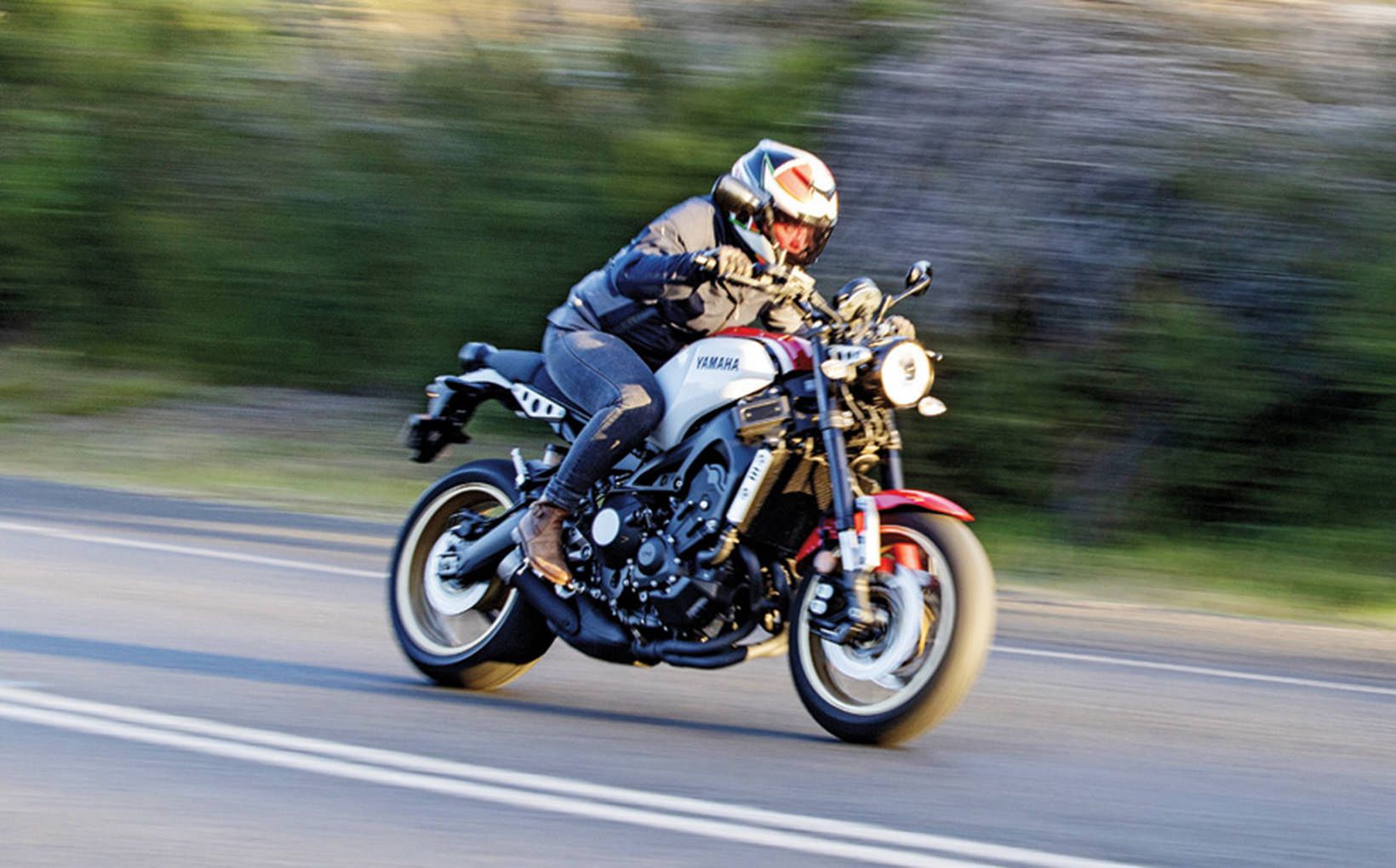 But I find it really hard to get my head around how such a competent and good looking machine like the XSR, complete with styling and finish that is going to date so much better than a standard MT-09 will, can have such a remarkably different story and outcome on the showroom floor.

If you haven’t ridden one, pop down to your local dealer this weekend and take one for a spin. And can you let me know why you reckon the so-called ‘bargain of the year’ has failed to make an impression on the Aussie market? Cos I’m buggered if I know.

Modes A, standard and B