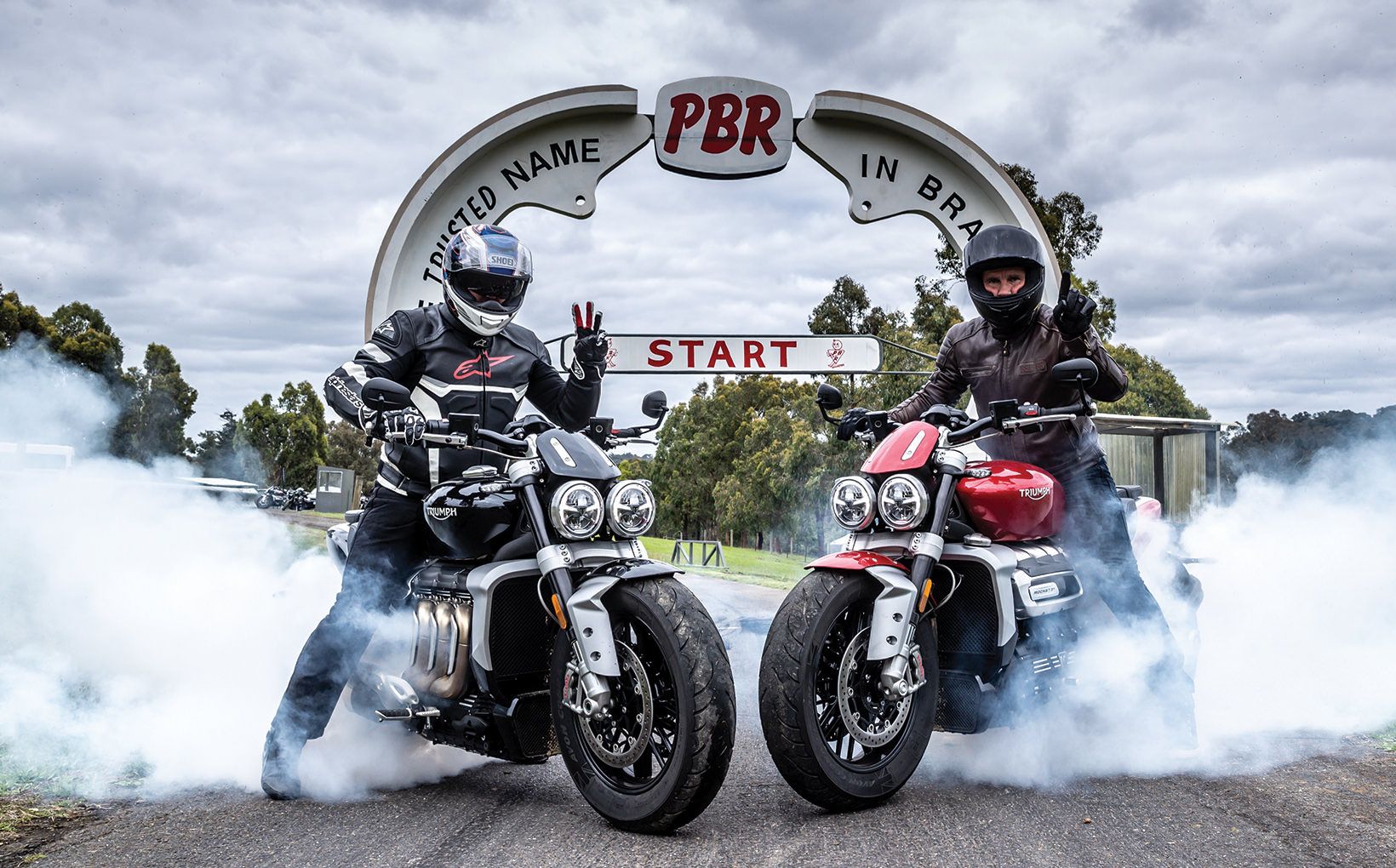 In an otherwise conservative world of low- capacity efficiency, Triumph says ‘hold my beer’ and delivers an all-new stump-pulling, tyre-shredding, 2458cc musclebike redesigned from the ground up.

Four years in the making, the new-generation Rocket 3 is bold, muscular and is as tough as nails. It is over 40kg lighter than is predecessor and at its heart is a new, lighter engine. A smaller crankcase, dry sump and new balancer shafts shed 18kg. The engine has been compacted with shorter conrods so it can sit lower in the frame and to feel smaller between your legs while you’re riding.

When on board, the only real giveaway to the engine’s size is the gentle twist to the left as you rev it.

All of that torque – which is just over double of what the new 1254cc BMW Boxer is capable of – is delivered at just 4000rpm, with peak power chiming in just 2000rpm later. There’s an obscene amount of grunt on hand at any given time. You certainly don’t need six gears. 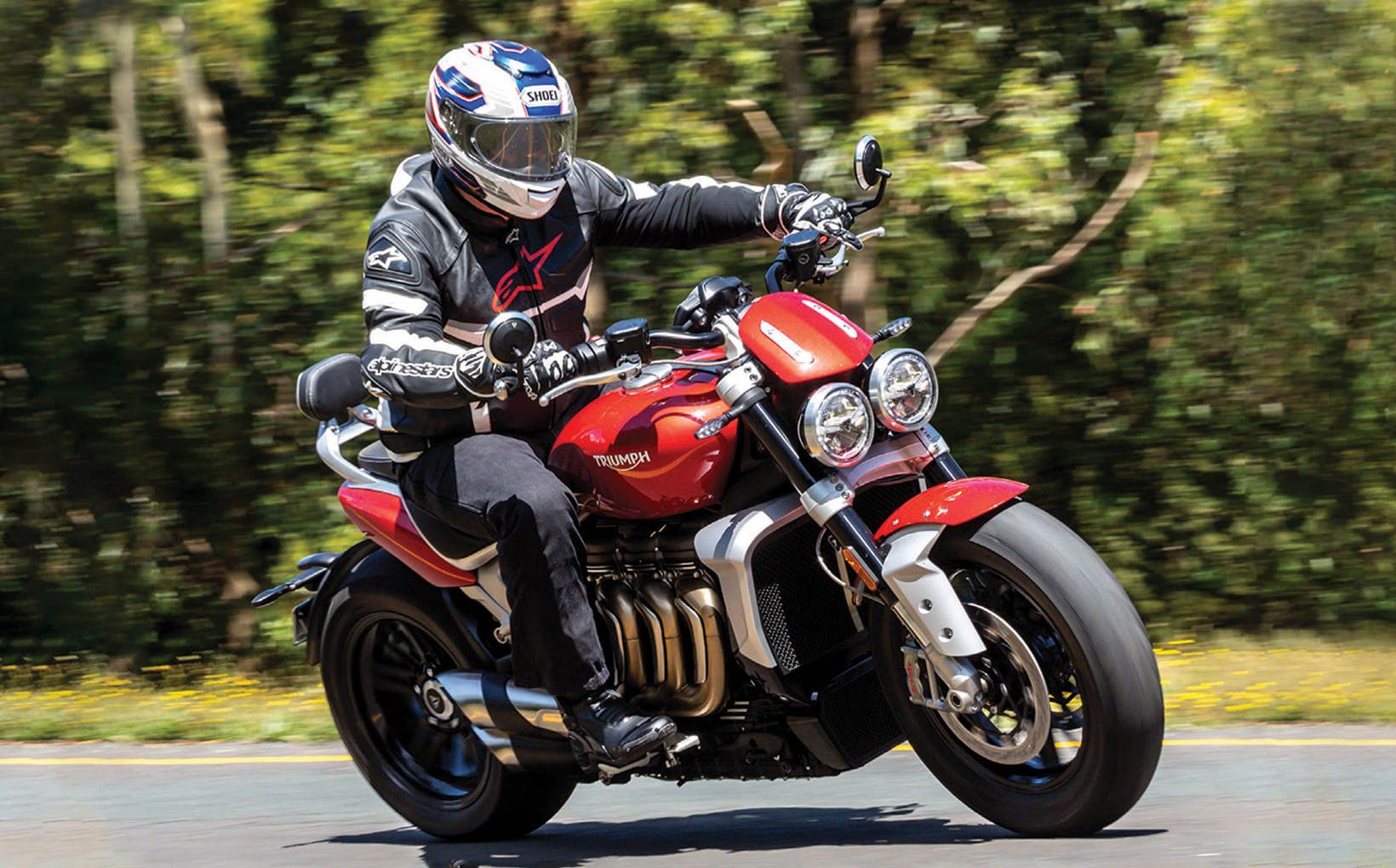 Nothing can quite prepare you for your first full-throttle burst on the Rocket. You wind the throttle on and the surge of torque is strong and relentless. The rear end stands up as it tries to funnel all the torque through the shaft drive and into the ground. It is an addictive sensation.

The hydroformed exhaust headers are a work of art on their own with brushed aluminium head shields. They sit close to your legs if you ride with your knees tucked in and you can feel the warmth coming from them. There is a massive catalytic converter under the bike behind the engine that keeps things clean and quiet.

The exhaust note is that signature Triumph triple hum but it’s quite gentle and drowned out by the wind at anything above 100km/h. But on deceleration and with the throttle closed there is a lovely but subtle popping sound that’s too delightful to be there by accident. The three mufflers look good enough for passers by to stare and comment on while you are resting your stretched arms or refuelling. But you can’t help but wonder just how good an aftermarket exhaust system could sound, and I imagine the weight saving would be substantial.

I started the bike and flicked it to Sport mode from the three selectable riding modes. The anticipation of nearly 2460cc was too much and I wanted to feel the best of it as soon as I could. Not the smartest idea, perhaps, as Melbourne had delivered its signature wet weather a few minutes before. As I opened the throttle on third gear on my way out of a roundabout, the bike stepped out to the side, the traction control light started having a fit and I sucked in more air than that massive airbox.

Thankfully, the electronics fought off my heavy-handed advances and my sensibilities very quickly scrolled through the modes on the TFT dash and selected Road mode, at least until the roads dried out. 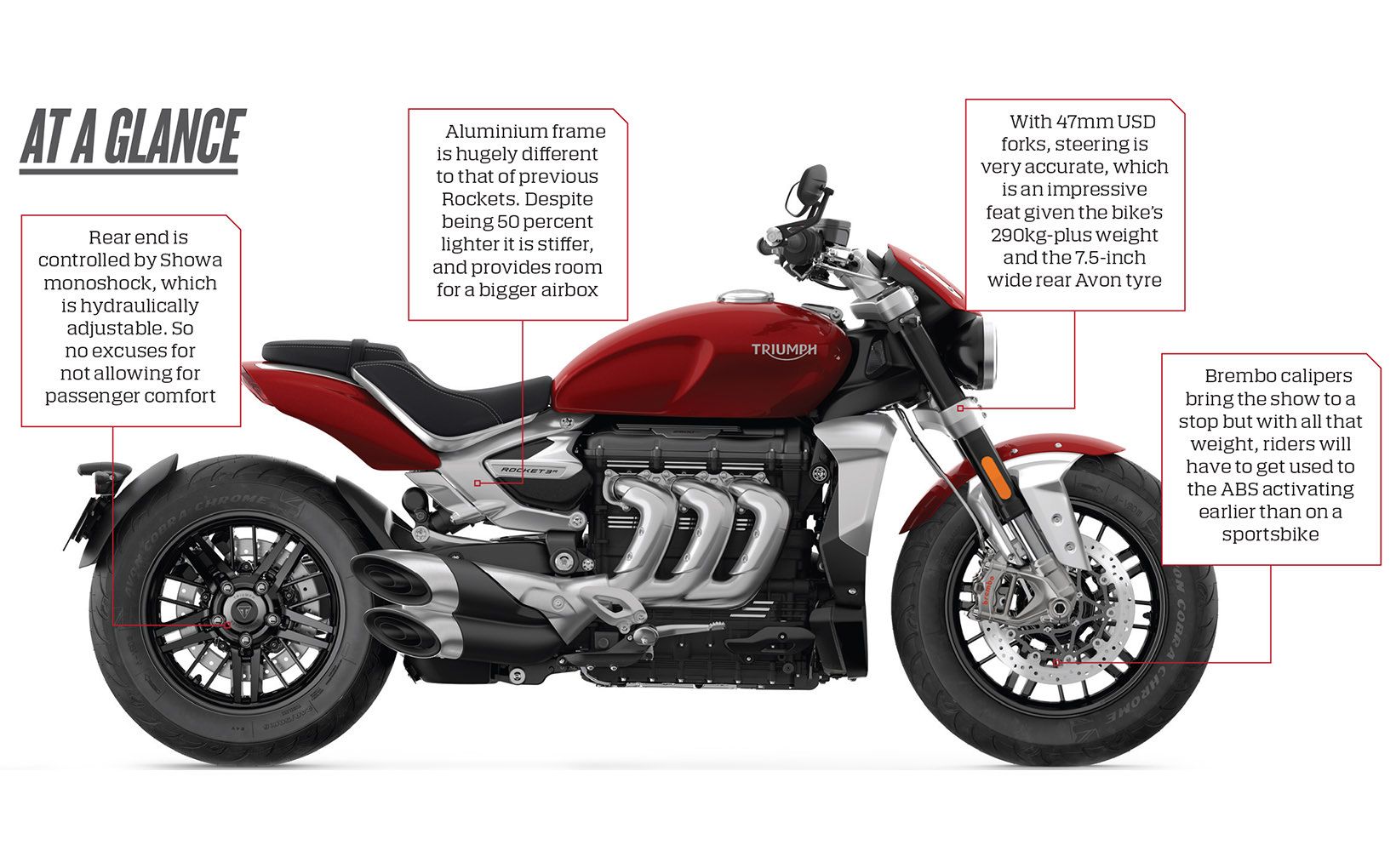 Triumph Rocket 3 at a glance

The inertial measurement unit (IMU) goes about its work flawlessly. In Road mode you can wind the throttle on hard while exiting a corner, it will begin to dial the power on, and as you become more upright you can feel it feeding the power on smoothly until you are fully upright. Rain mode works the same way, but with a much softer response.

After the sun dried the road and a couple of hours familiarising myself in the saddle, I entered the customisable Ride mode and selected full power combined with zero traction control. You need to be stationary to turn the traction control off (however the ABS is not switchable, and I’m totally fine with that). Riding with full power and no traction control is quite a liberating experience.

It demands 100 percent concentration as even a small patch of gravel or water can turn you into a wheel-spinning madman if you are hard on the throttle. So much fun. 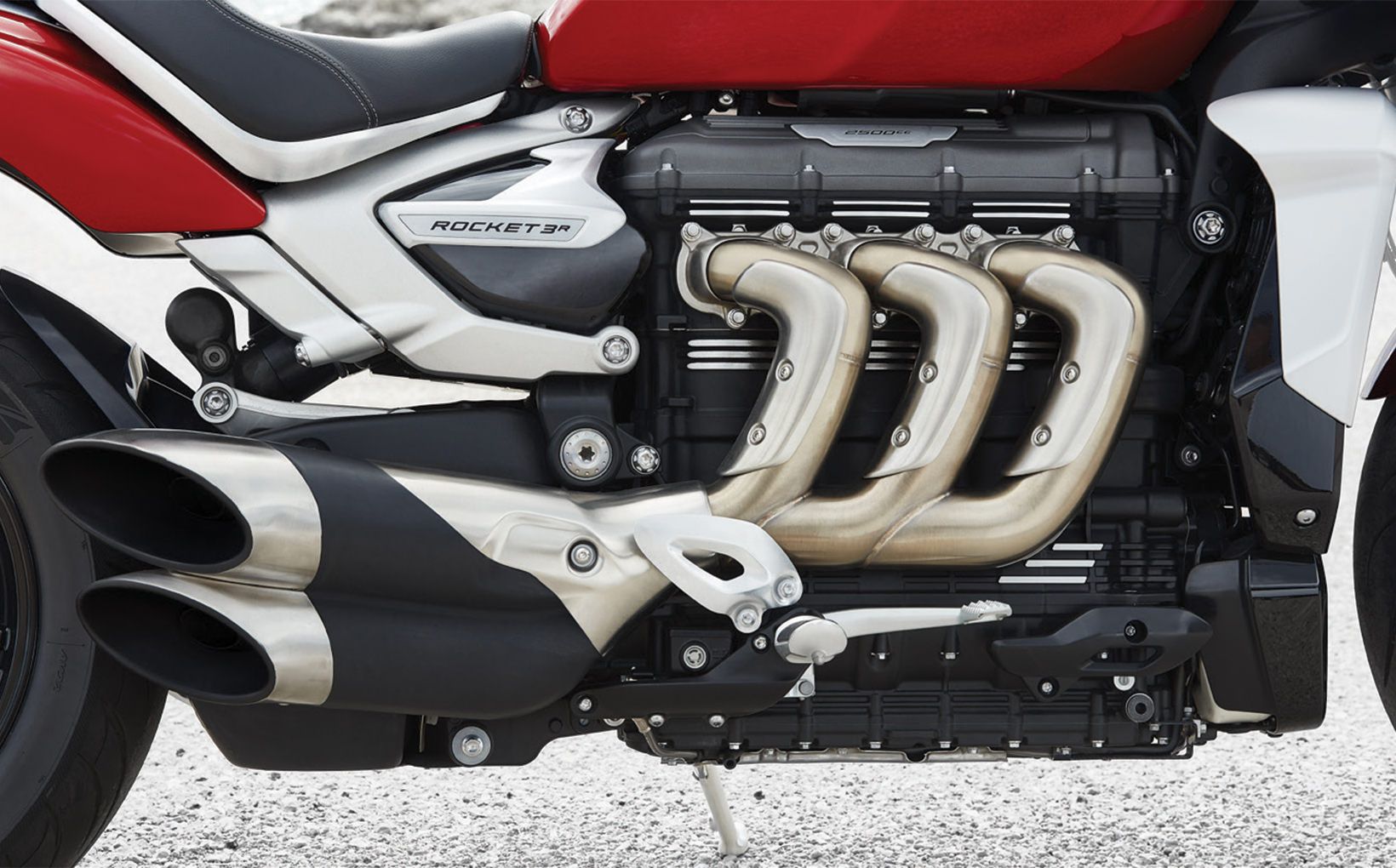 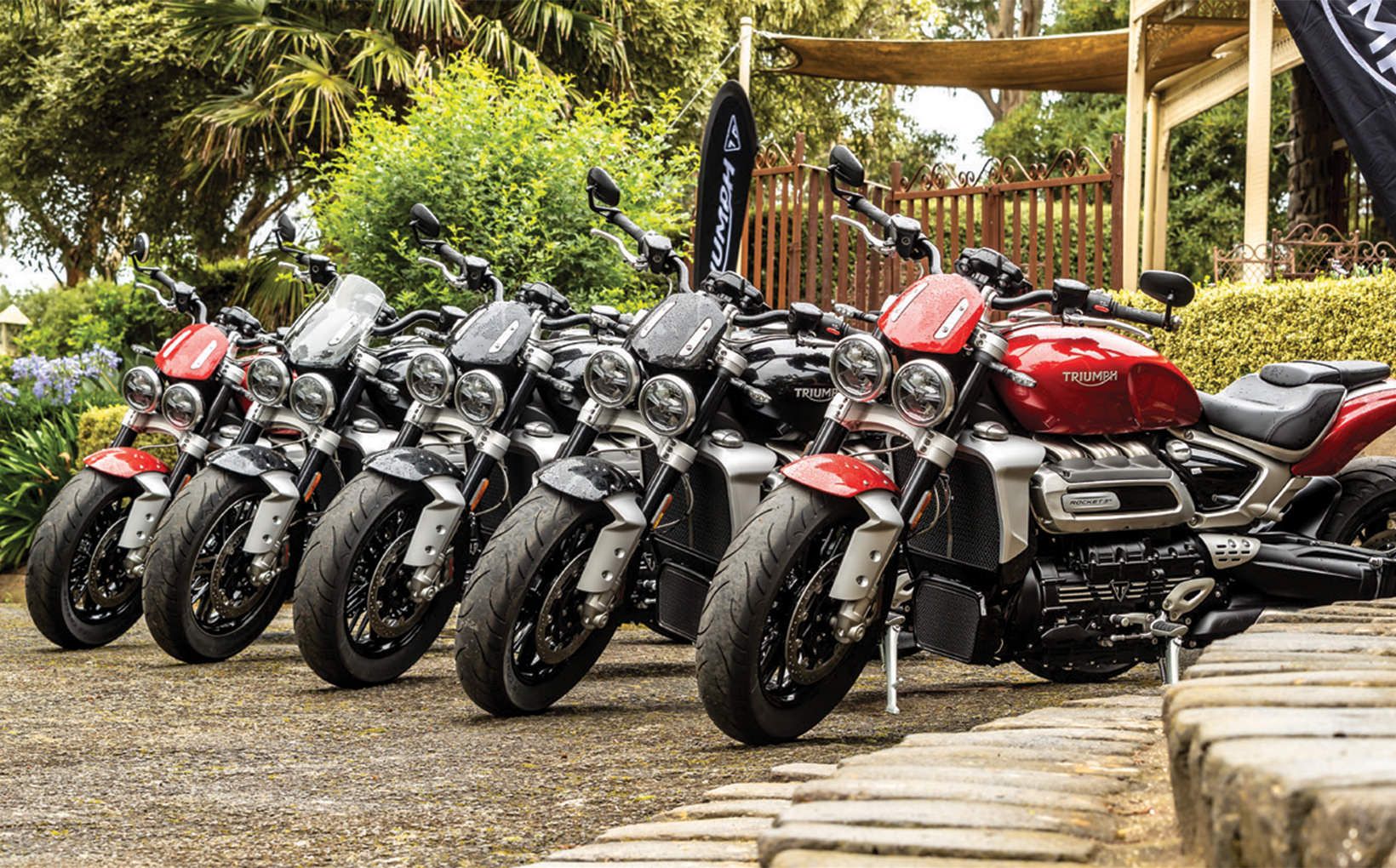 Little known fact: the collection noun is 'an Elton of Rockets'...

We stopped in at Victoria’s historic Rob Roy Hill Climb course to have a bit of a squirt off the public roads. The way the bike catapults out of corners is nothing short of amazing. Sending a 300kg missile up hill out of a bend in third gear with the rear spinning up, handlebars twitching as the suspension protests and the front wheel skipping across the bitumen is difficult to explain. But it’s a feeling I will never forget.

Creating all that grunt is one thing, successfully getting it to the ground in something resembling a usable and predictable manner is something else altogether. Triumph opted for a new helical-cut gearbox over a conventional straight-cut affair which offers more strength from an overall lighter package. The gear shifts are light and sweet, sportsbike-style, with no evidence of that cruiser-esque clunking or missed gears. A new torque assist hydraulic clutch is fitted, too, resulting in an unusually light lever pull – almost like an enduro bike – but as torque increases the clutch bites harder to resist slipping as that torque gets unleashed. 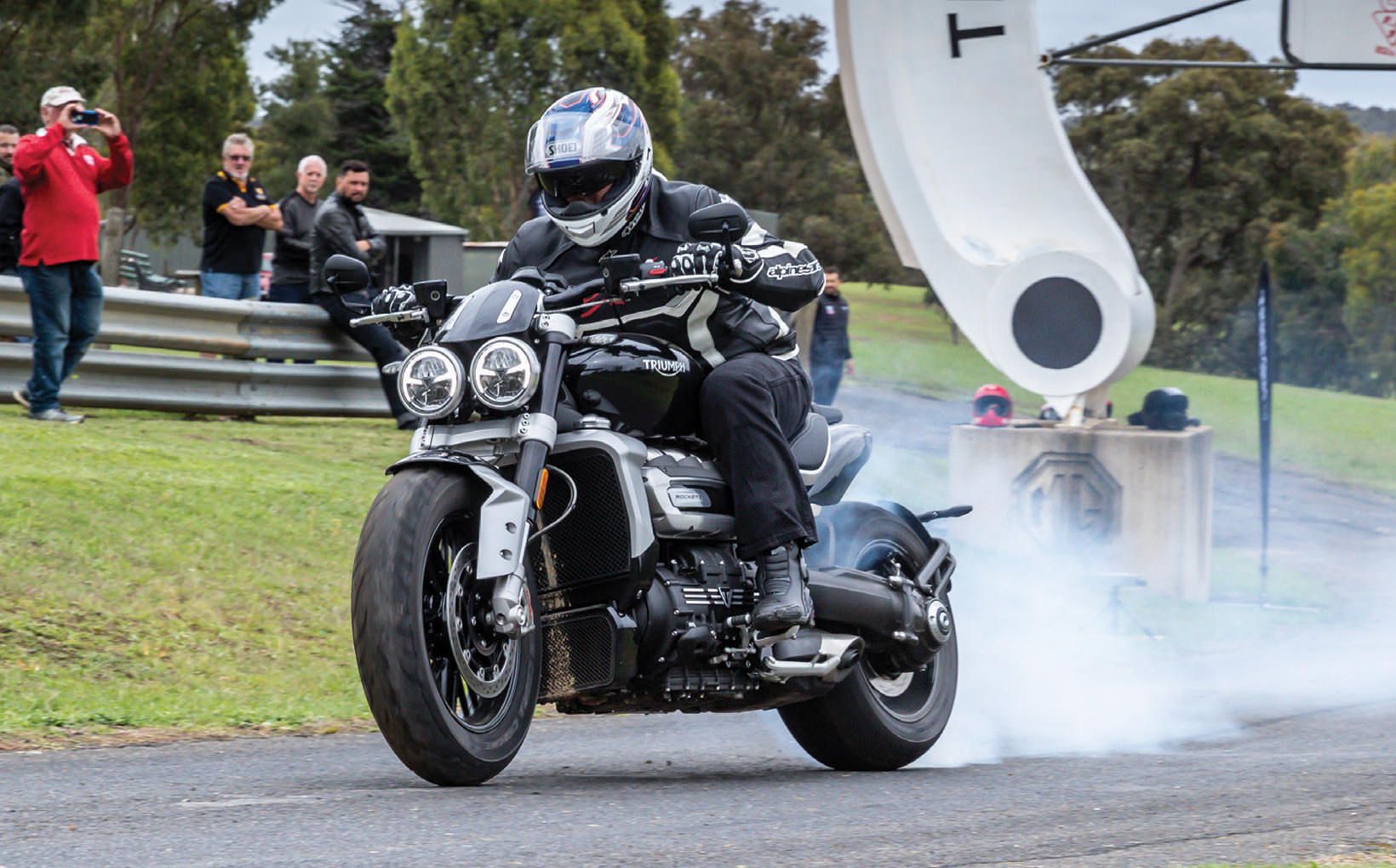 The Rob Roy Hill Climb is the second-oldest purpose-built hillclimb in the world.

And while I agree that no 2020 roadbike that costs in excess of $15K should ever come without a quickshifter fitted as standard, the gearbox is that good it’s actually not a necessity. The shaft final drive reduces maintenance costs while the single-sided affair means the rear wheel can be removed without removing mufflers or other attachments.

With the drivetrain sorted, an all-new aluminium frame was designed with some nifty inclusions. The frame itself sits lower and is 50 percent lighter than the chassis it replaces.

The air intake is forward facing to let the beast breathe fresh air and the frame encases the wiring loom because nobody wants to see that stuff. Fitted to the front is a pair of high-spec 47mm Showa forks. Adjustable for rebound and compression damping, they have an offset axle mount to keep the desired steering head angle while reducing trail for more steering response and feedback through the ’bars. 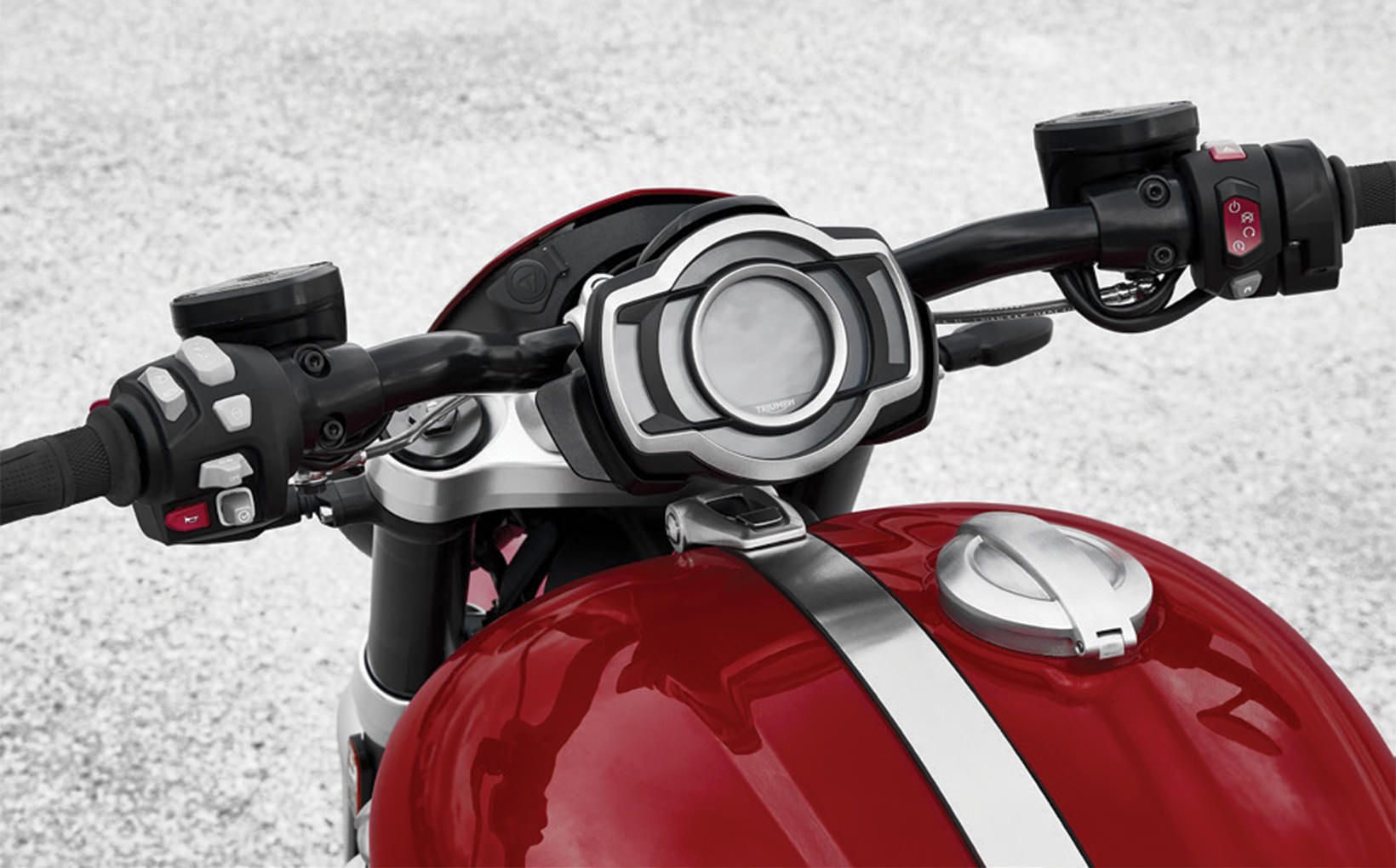 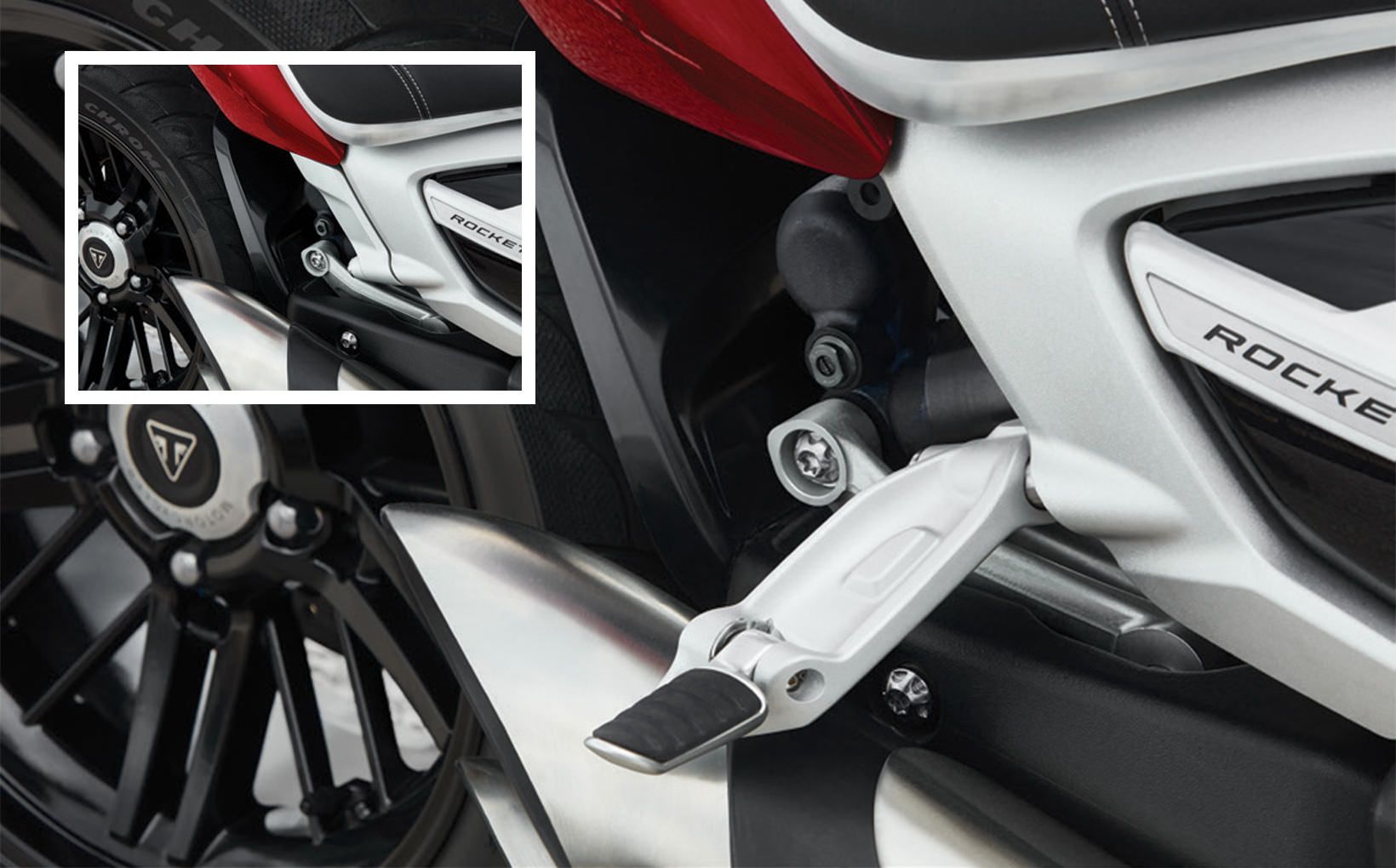 Now that is how a passenger footpeg should fold away 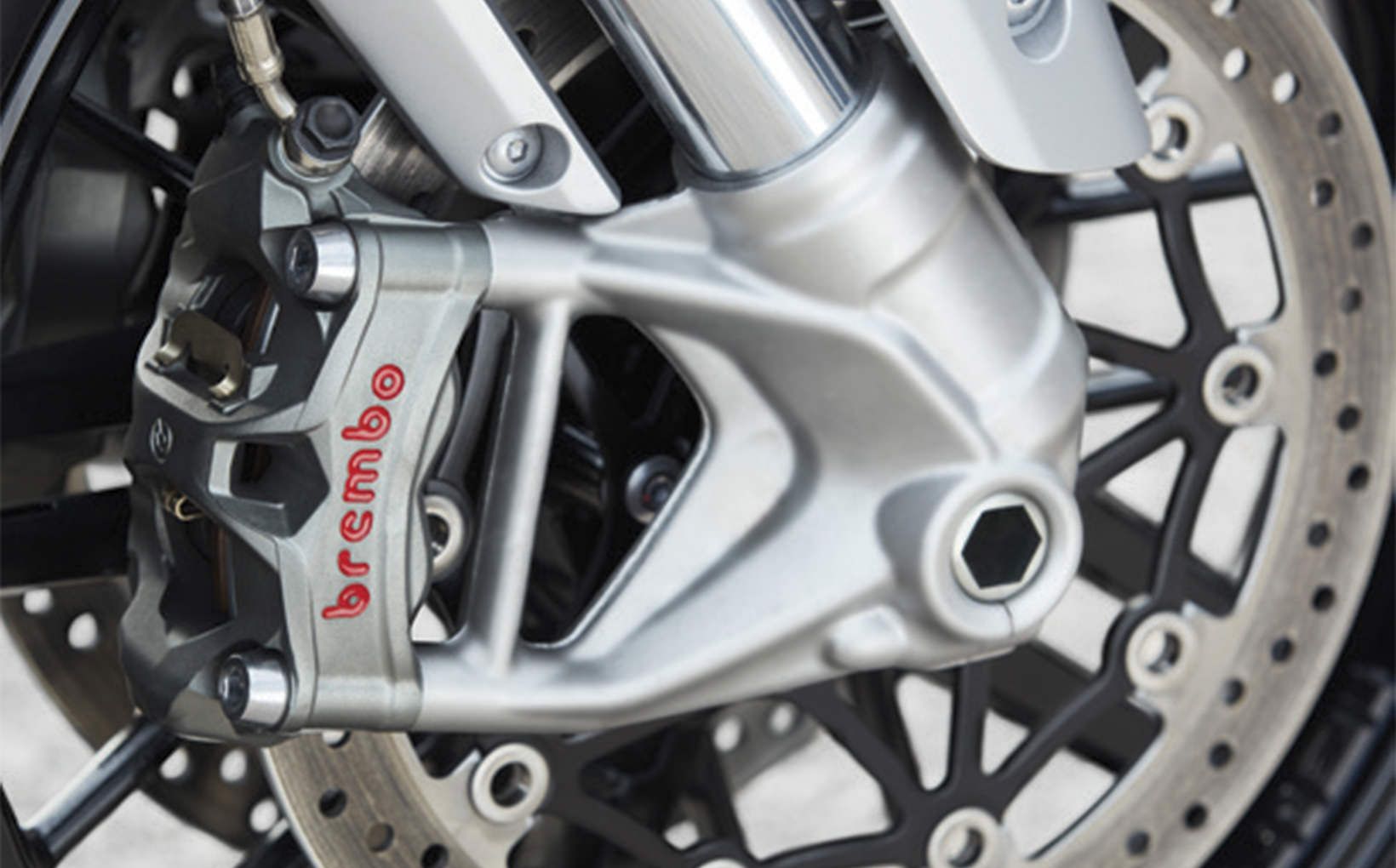 Brembo’s top-shelf Stylema front calipers and a radial-mounted Monobloc caliper on the rear. 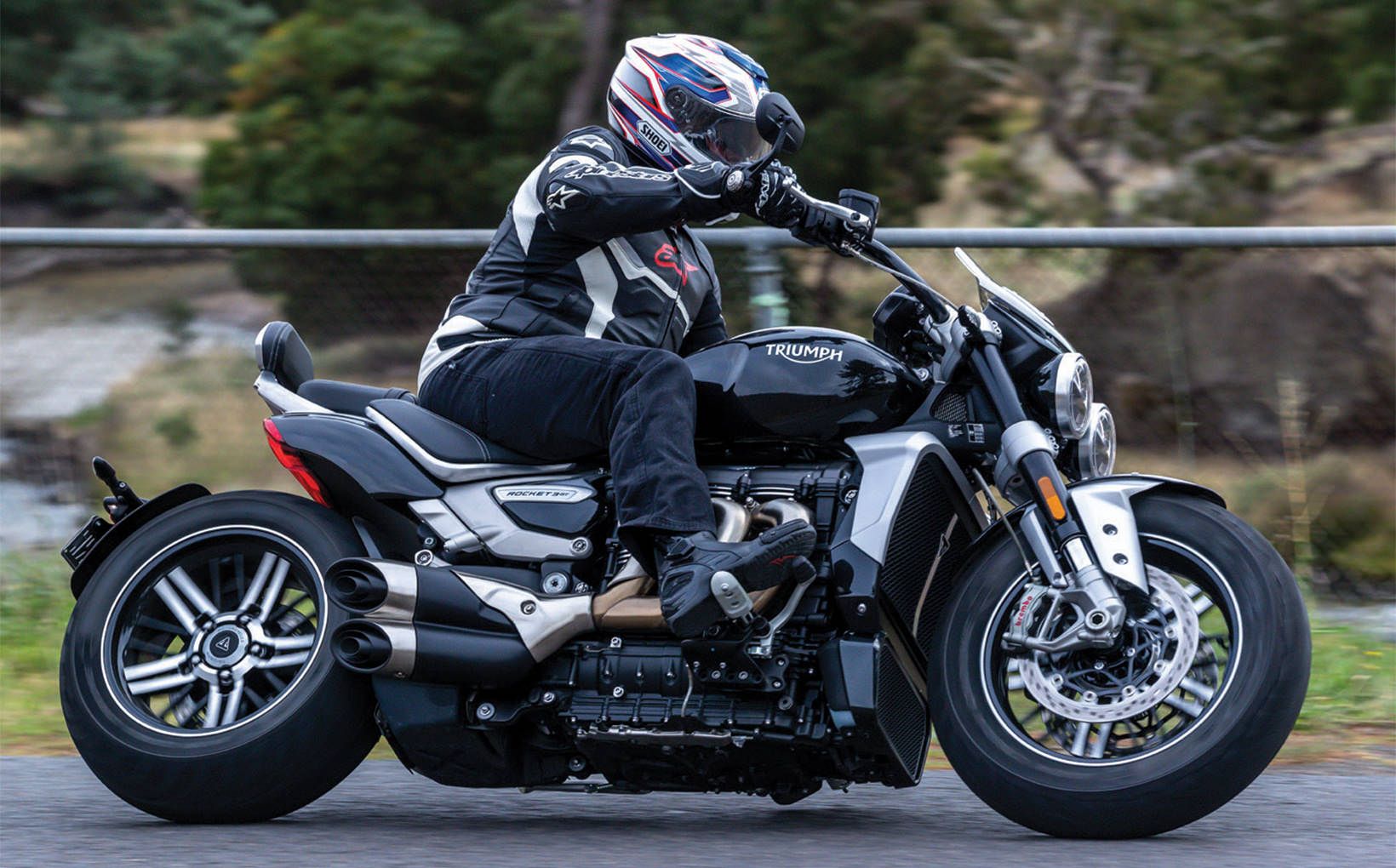 Steering and braking is remarkably good but you do feel the weight.

Down the back is a fully adjustable Showa monoshock with rebound and compression adjustment, as well as a hydraulic preload adjuster. A welcome inclusion for those who carry a pillion or luggage occasionally, as it is a quick and tool-free tweak. I found you needed more rear preload on the GT model compared to the standard bike as your weight was further over the back wheel. Bottoming out on potholes really smashes your lower back if it’s not set up correctly, so I was grateful for the hydraulic assistance.

The standard suspension has its work cut out for it dealing with all that power and weight combined with our often crappy roads, but it will reward you for being smooth on the gas and planning your corners. The bike is easy to steer – you don’t have to be a monster to be able to effectively muscle the bike about at either low or high speeds. I was expecting the handling to be heavy and deliberate with the large 240-section rear tyre, but I was pleasantly surprised by how planted and intuitive it felt.

A fast and heavy bike needs some serious brakes and Brembo’s top-shelf Stylema front calipers and a radial-mounted Monobloc caliper on the rear is just the ticket. The Rocket handles the corners with ease and it’s easy to get into a comfortable rhythm powering out of the turns using the immense torque on exit before setting up for the next one. 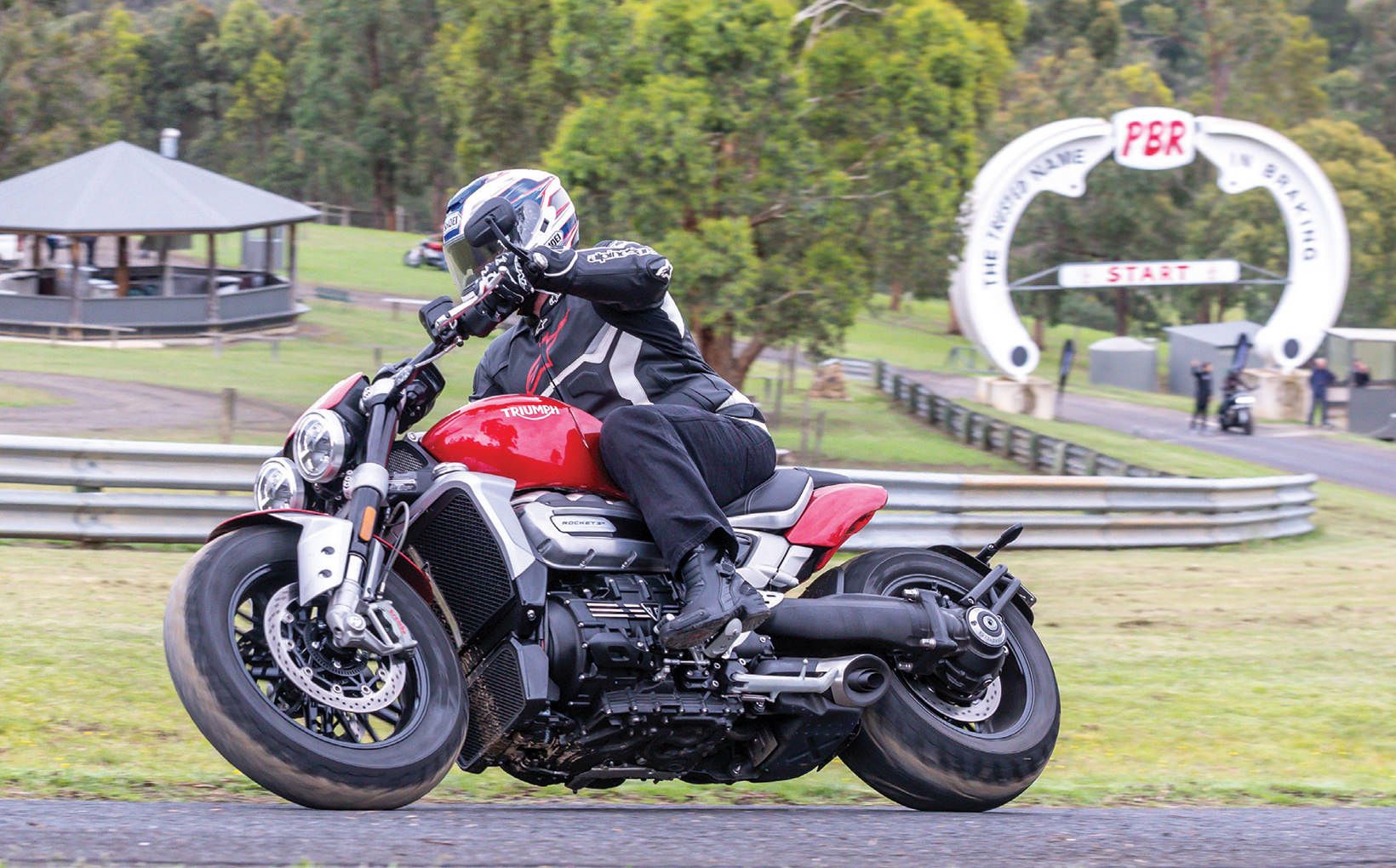 The gearbox is that good that a quickshifter is actually not a necessity.

But despite the braking package’s impressive and proven credentials, it’s hard to hide the bike’s weight when you really need to pull the reigns in. A quick squeeze of the brakes can easily activate the ABS as the Brembos are so powerful and the bike is so heavy. You really need to bring your braking A-game if you want to push the limits.

The rider cockpit is super clean. With the wiring running through the bars there is nothing out of place. The full-colour TFT dash is similar to the one found on the firm’s new Scrambler 1200; very easy on the eye and displays all the necessities. Rider modes, cruise control, fuel level, gear selection, trip meters, temperatures, TC and ABS. You can even program it to display your name on start-up. With an added Bluetooth module ($295) and a Triumph app you can use navigation, control music, take and make phone calls and even navigate around your GoPro’s functions. And the keyless ignition and bar-end mirrors help keep the cockpit clean and tidy, too.

Triumph has fitted Hill Hold Control as standard, it can be switched off on the menu if you don’t like it, but pulling up on a hill and squeezing the front brake brings up a light on the dash telling you it’s activated. Simply release the clutch and it releases the rear brake as you move away. It makes good sense on a bike this size.

The British firm has really excelled in the build quality and looks department; the Rocket 3 is a stunner. There’s LED lights all ’round, brushed aluminium everywhere you look, the fuel cap and radiator cap are sculpted to look retro but still function in a thoroughly modern way. Not a single surface has been overlooked or rushed and one of my favourite examples is the passenger footpegs which fold away completely when not in use. 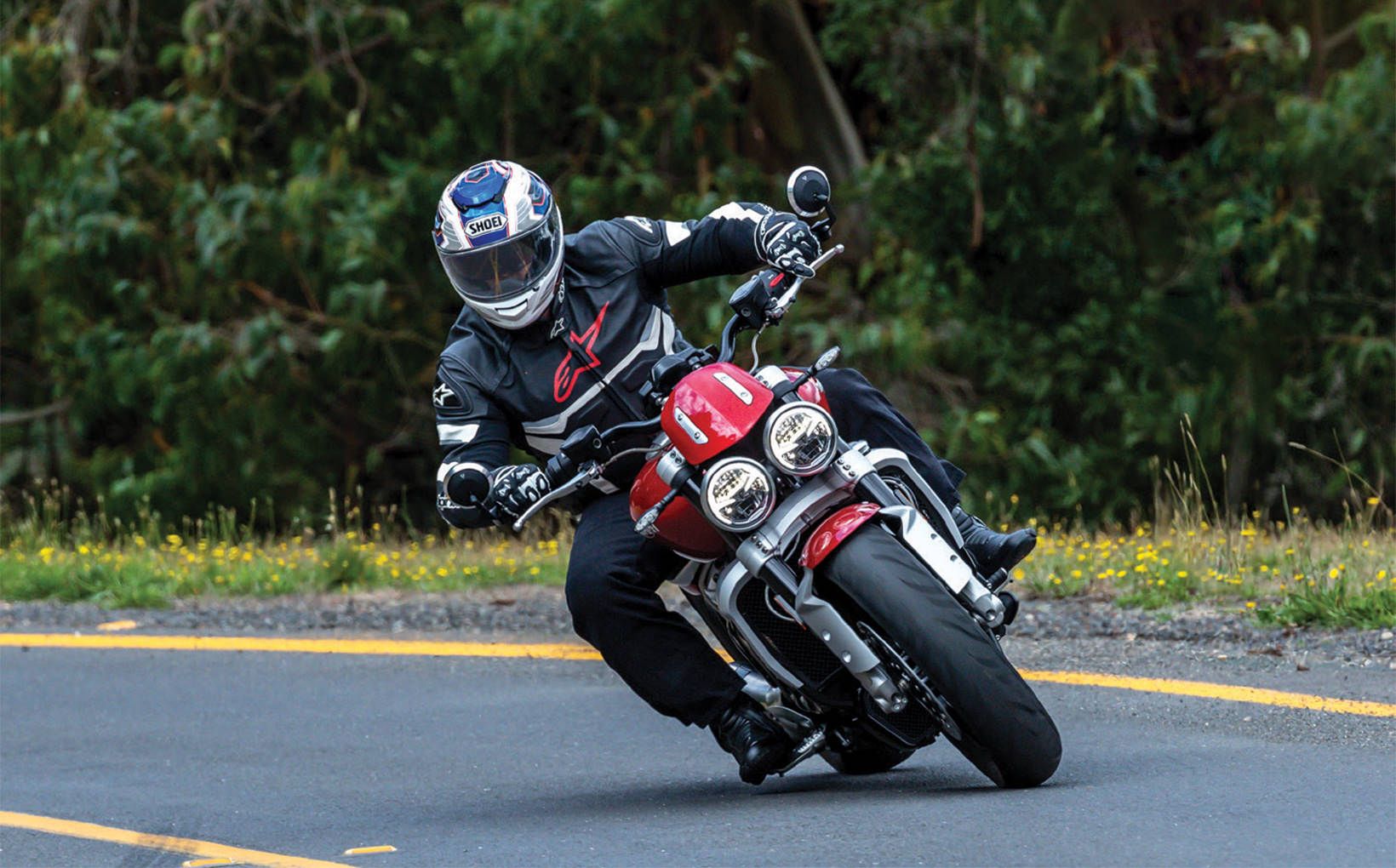 Handling is impressive but inevitably, you feel the weight in the corners. 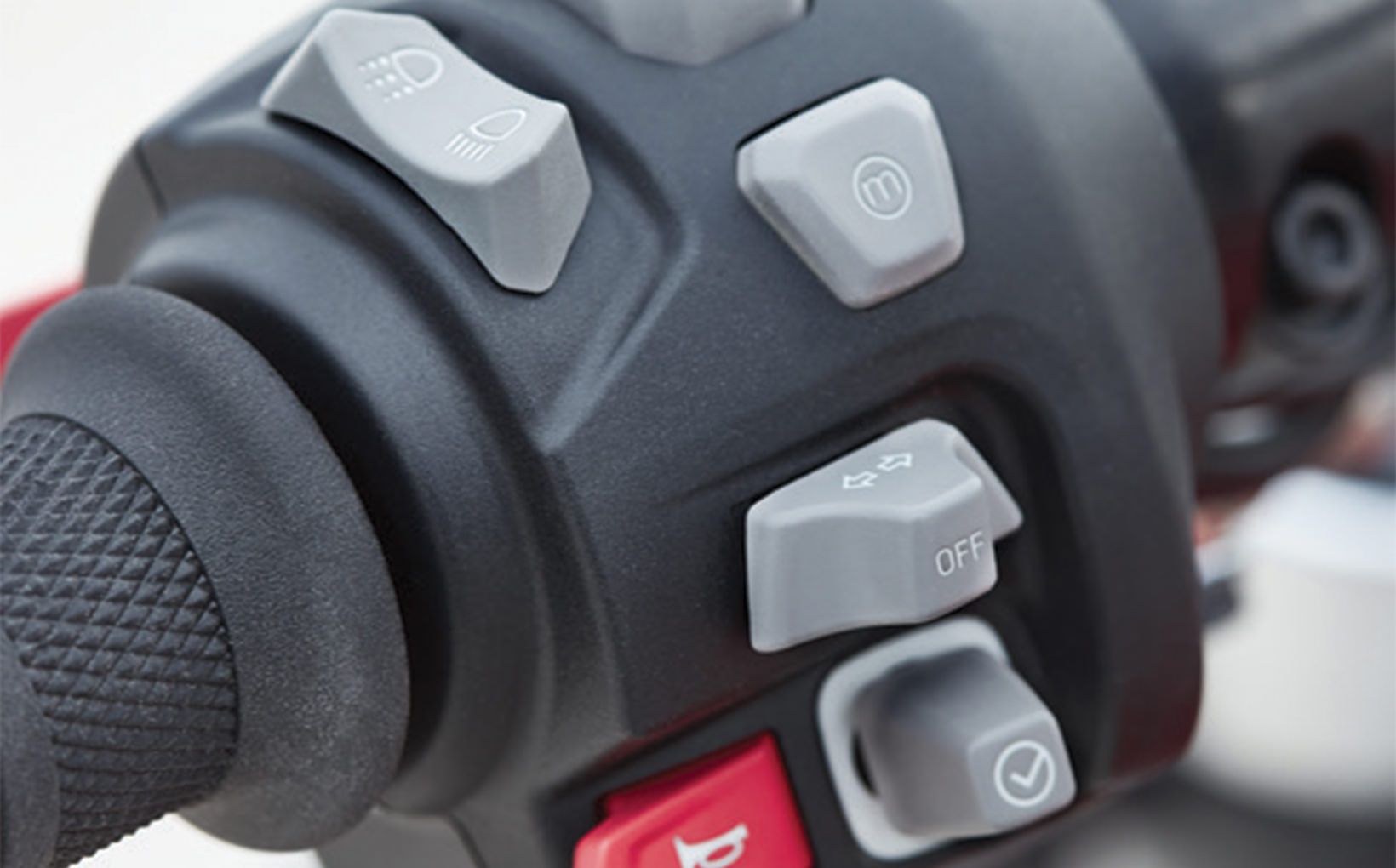 Switches will be familiar to Triumph owners, even with the menu buttons 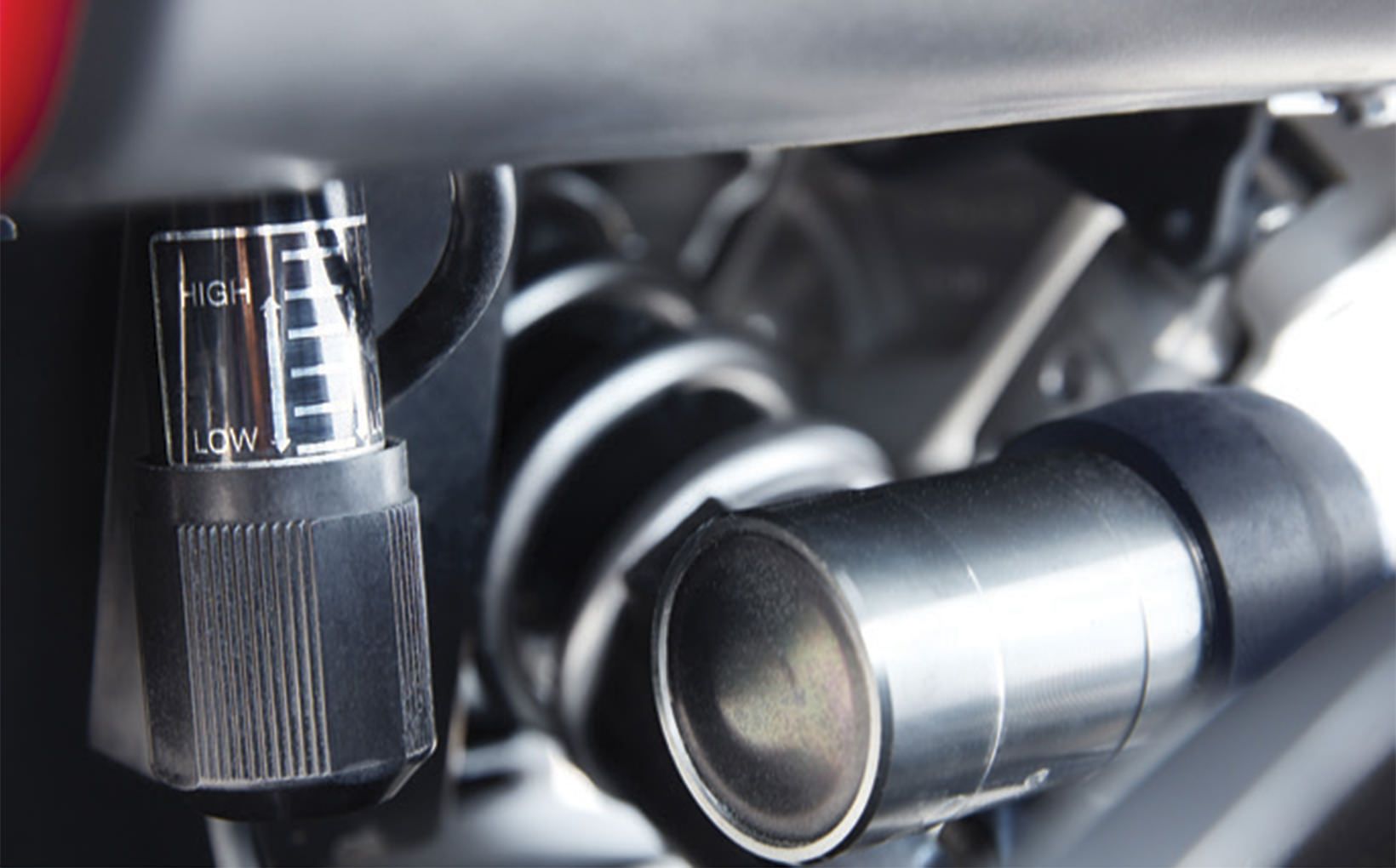 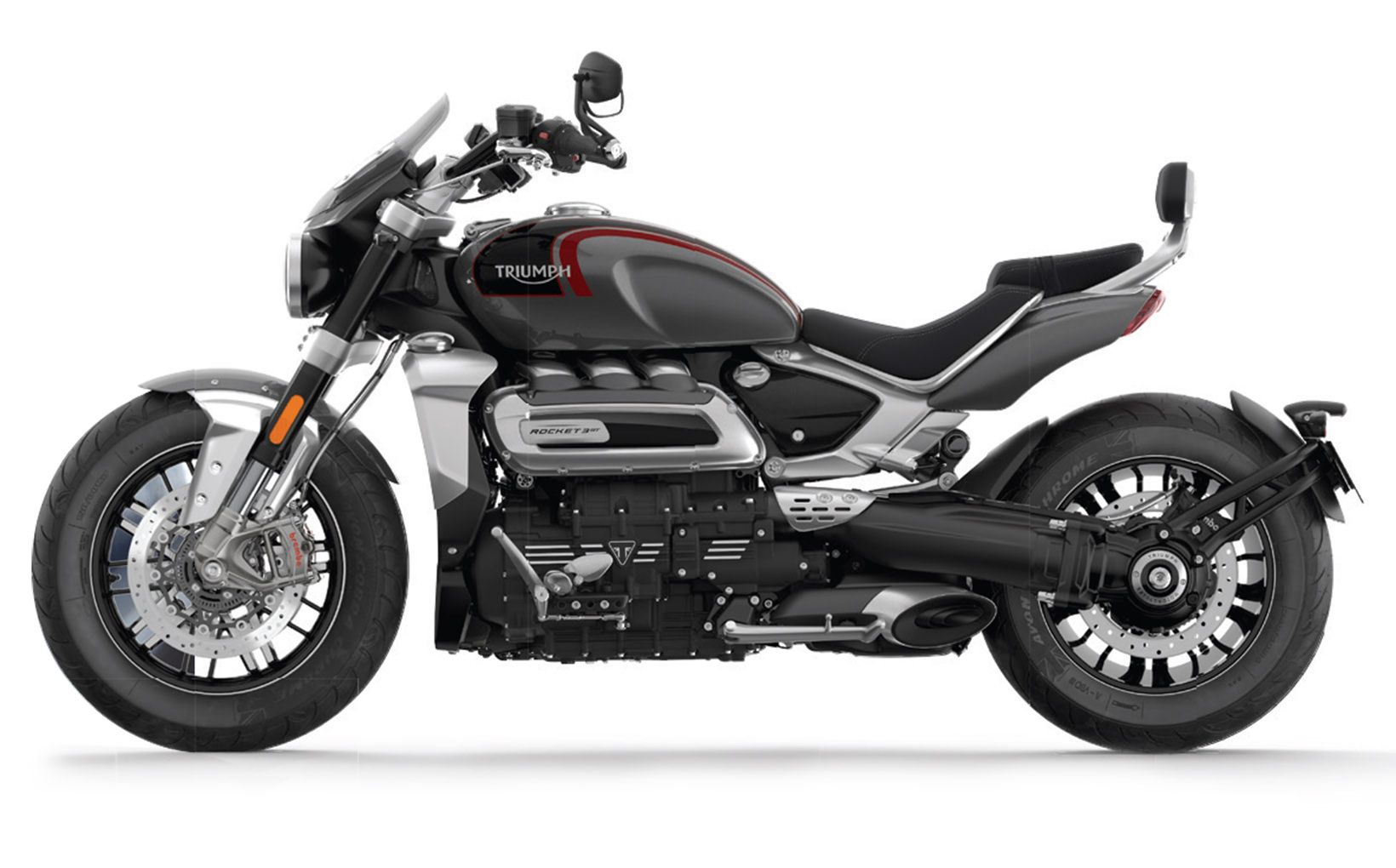 Triumph has really excelled in the build quality and looks department.

And let’s not forget the adjustable rider footpegs. The R model’s ’pegs are height adjustable while the GT’s forward controls can be moved backwards and forwards depending on the length of your walking pins. And, while I didn’t try it, I was reliably informed by the Triumph techs that the GT’s forward controls can be fitted to the R and vice versa.

The fuel tank has been reduced to an 18L capacity on the new model. This could be a deal breaker for some people keen on covering long distances. In saying that, the Euro-5 emissions requirements mean the bike is very fuel-efficient and Triumph claims a fuel consumption figure somewhere in the realm of 6.8L/100km. According to the dash this is easily achievable if you are touring. So in theory, a range of 250km or more would be achievable if you are frugal. 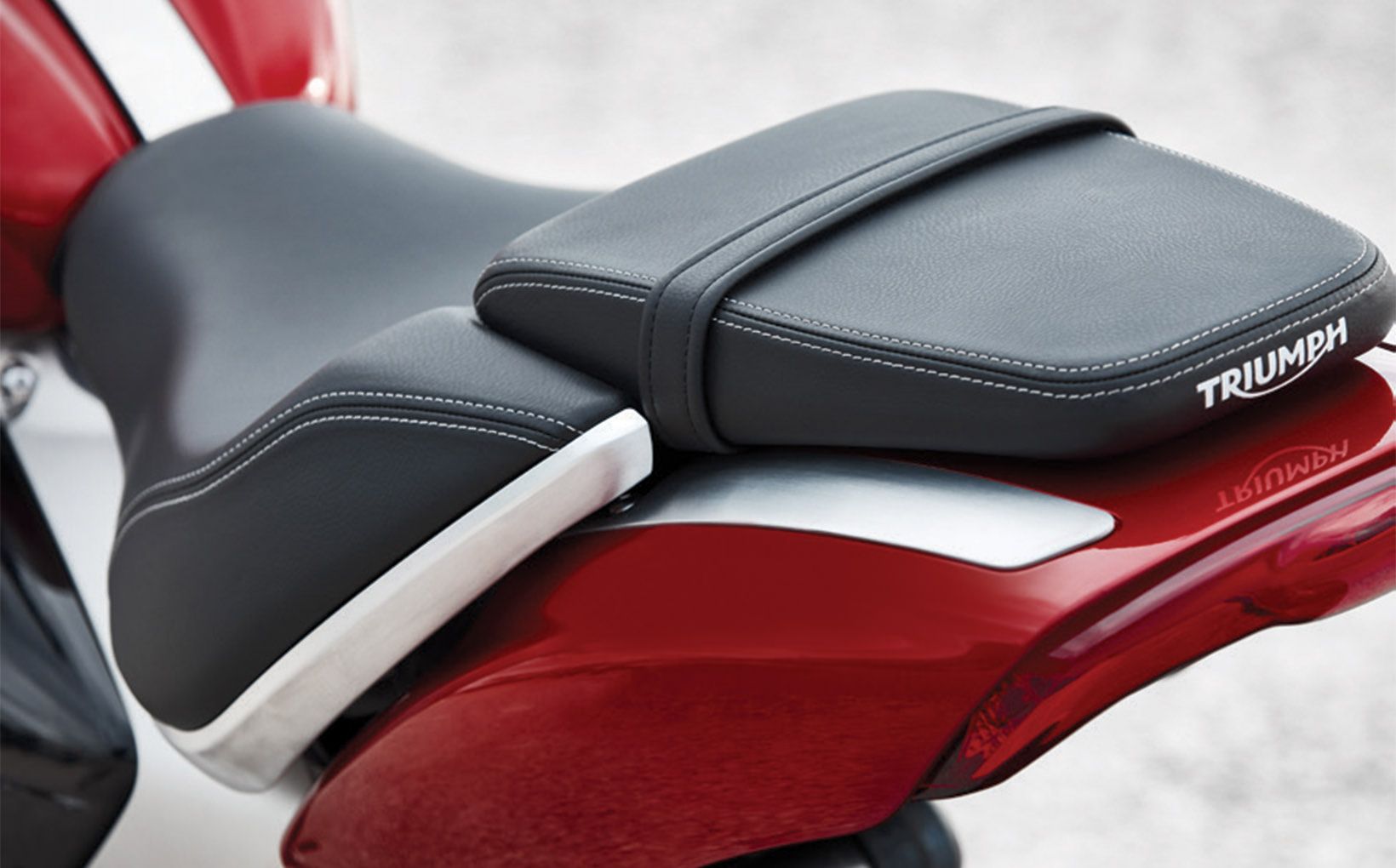 Seating is quite comfortable (and if you want more, the accessory catalogue is vast). 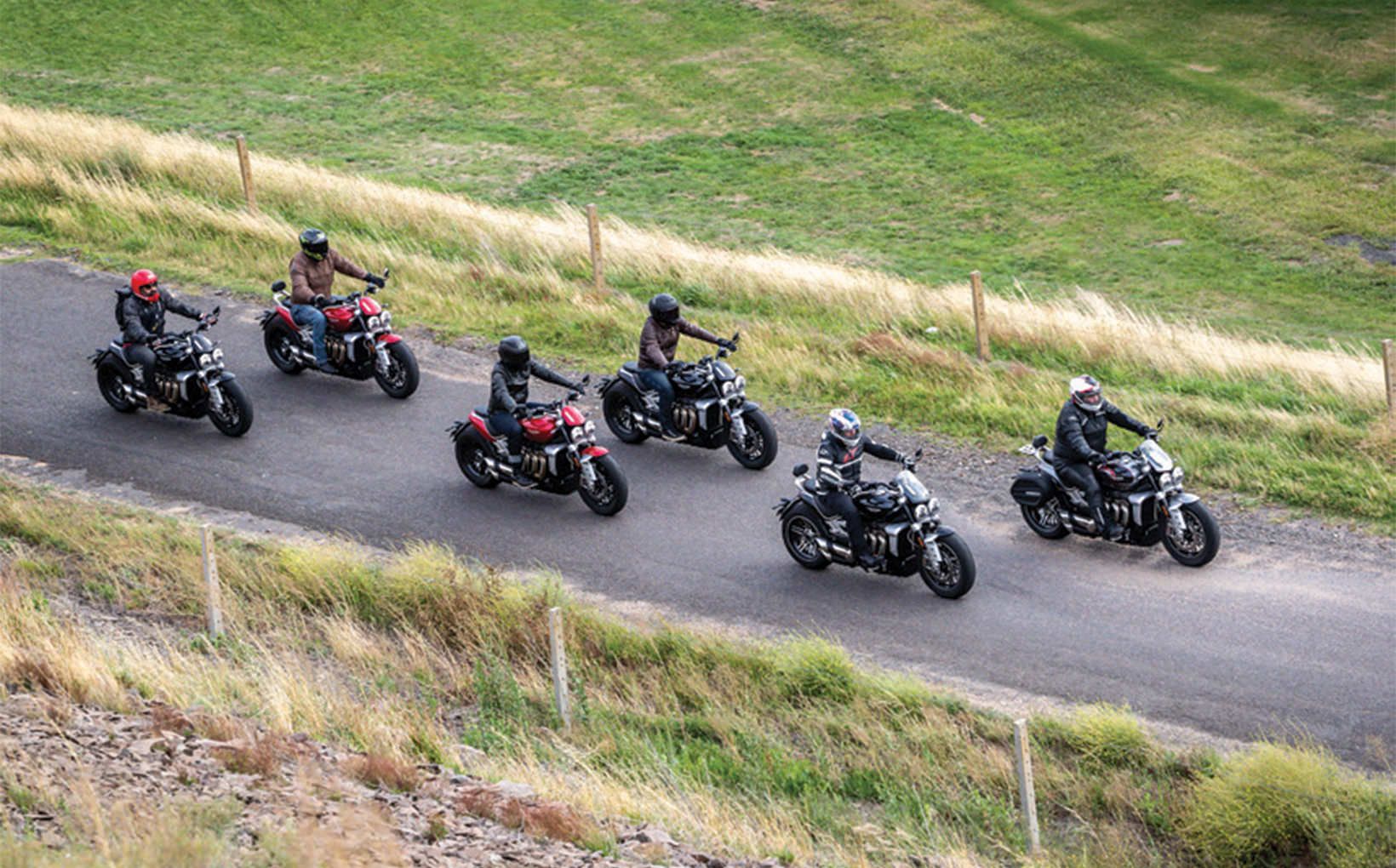 Imagine a one-make racing series for these bad boys...

Not that your body will be screaming to jump off it – the ergonomics are well thought out and, importantly, moderately customisable. I could honestly ride it all day long without an issue. I preferred the R model’s riding position with its mid-mounted foot controls and the slightly longer reach to the ’bars. It’s a more aggressive riding stance which thoroughly suits the aggressive power output. But I can appreciate the touring comfort and more relaxed riding position available on the GT, too.

But it hardly maters, whether you opt for the the R or the GT you will always be in awe of that stonking triple-cylinder engine. Hang on and enjoy the ride. 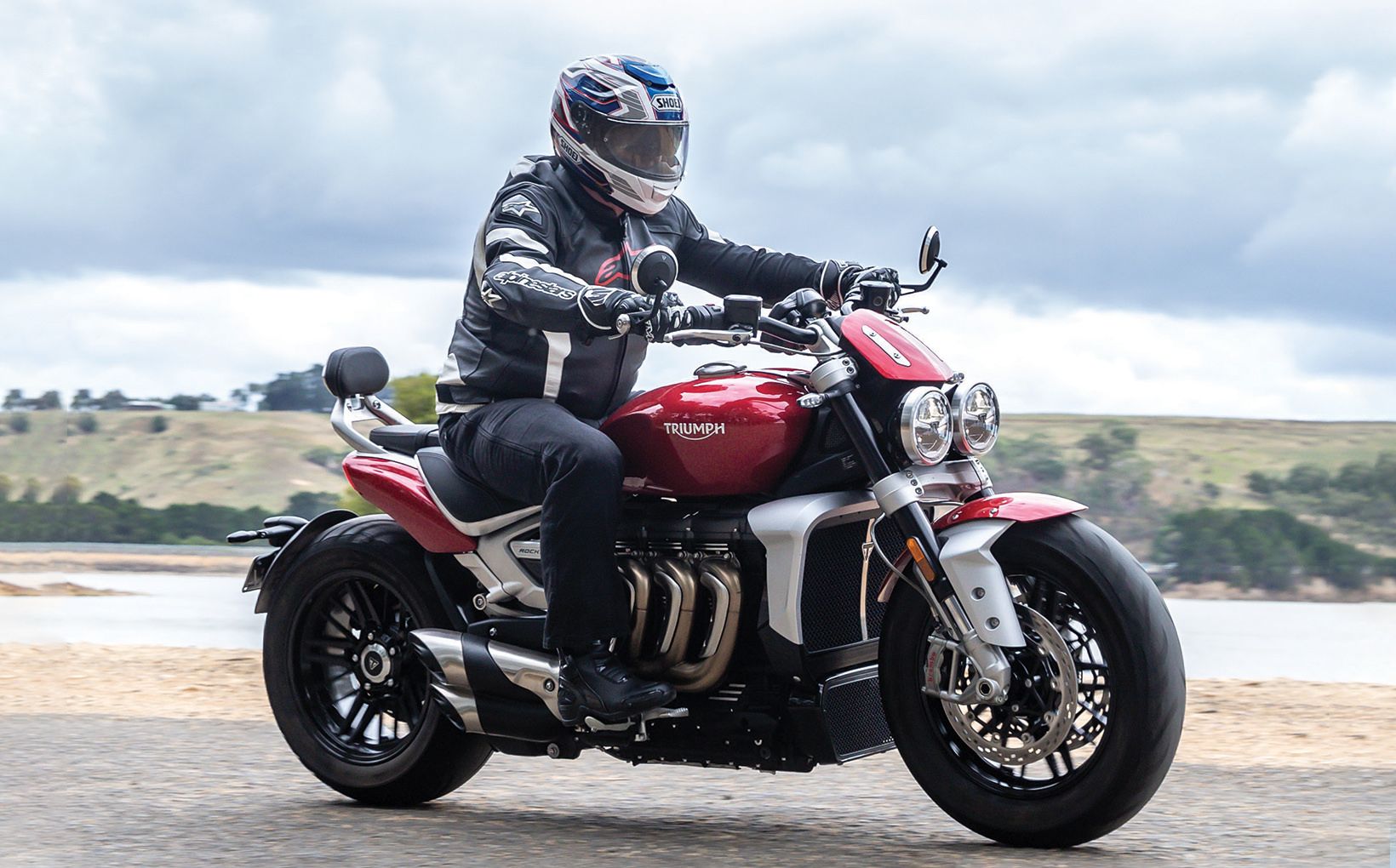 You will always be in awe of that stonking triple-cylinder engine.