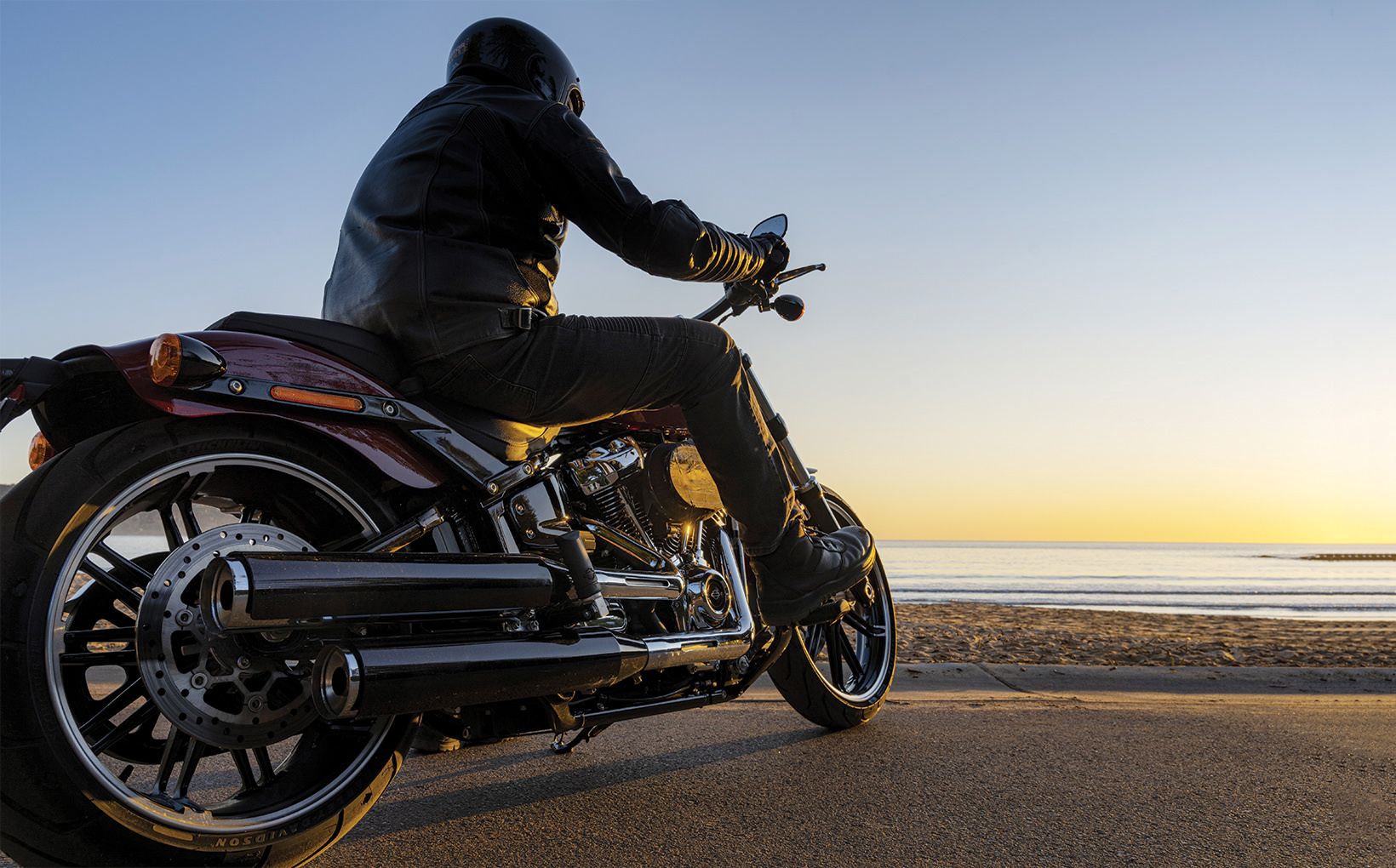 Harley’s Breakout has been one of the brand’s Australian success stories since it was first released here in 2013. For the last few years, it has held the title of Australia’s number-one selling non-LAMS-approved roadbike. That’s pretty impressive, especially for a bike that’ll set you back the better part of $35K and, outwardly at least, doesn’t boast a spec sheet of any real note. So, what is it about the Breakout that has made it so damn popular? Is it a performance thing, the looks, the perceived Harley bad-boy factor or is it a combination? I reckon it’s a combination of classic chopper looks and the Harley vibe. 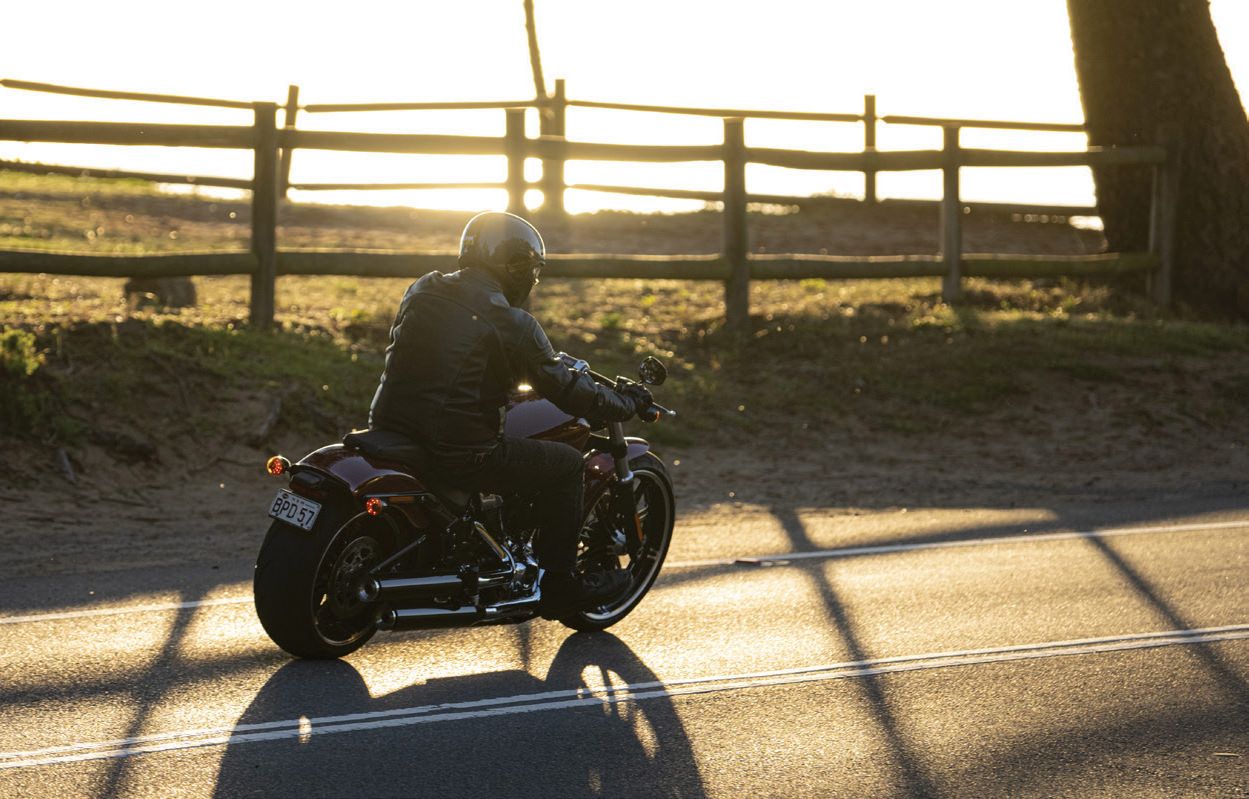 The Breakout has remained pretty much unchanged from 2013 until the release of the updated model in 2018. But the 2018 Breakout was more than a mid-term update, copping a new lighter and stiffer frame and swingarm as well as the new suspension the rest of the Softail range received at the same time.

The Breakout was offered in both Milwaukee-Eight 107 or 114 cubic-inch variants until this year when Harley offered it only in your choice of 114, 114 or 114 – and who’s going to whinge about having to have more ponies? The 1868cc powerplant makes 155Nm of torque and pushes the 305kg (wet, claimed) Breakout along at a deceptively fast pace. Without the loud exhaust that many Harley owners are accustomed to giving an audible speed indication, the Breakout feels a bit restricted, especially for a bike with such a mighty torque figure and such large displacement. But it’s plenty fast; the speed just creeps up on you quietly and slyly like a cat creeping up on its prey. 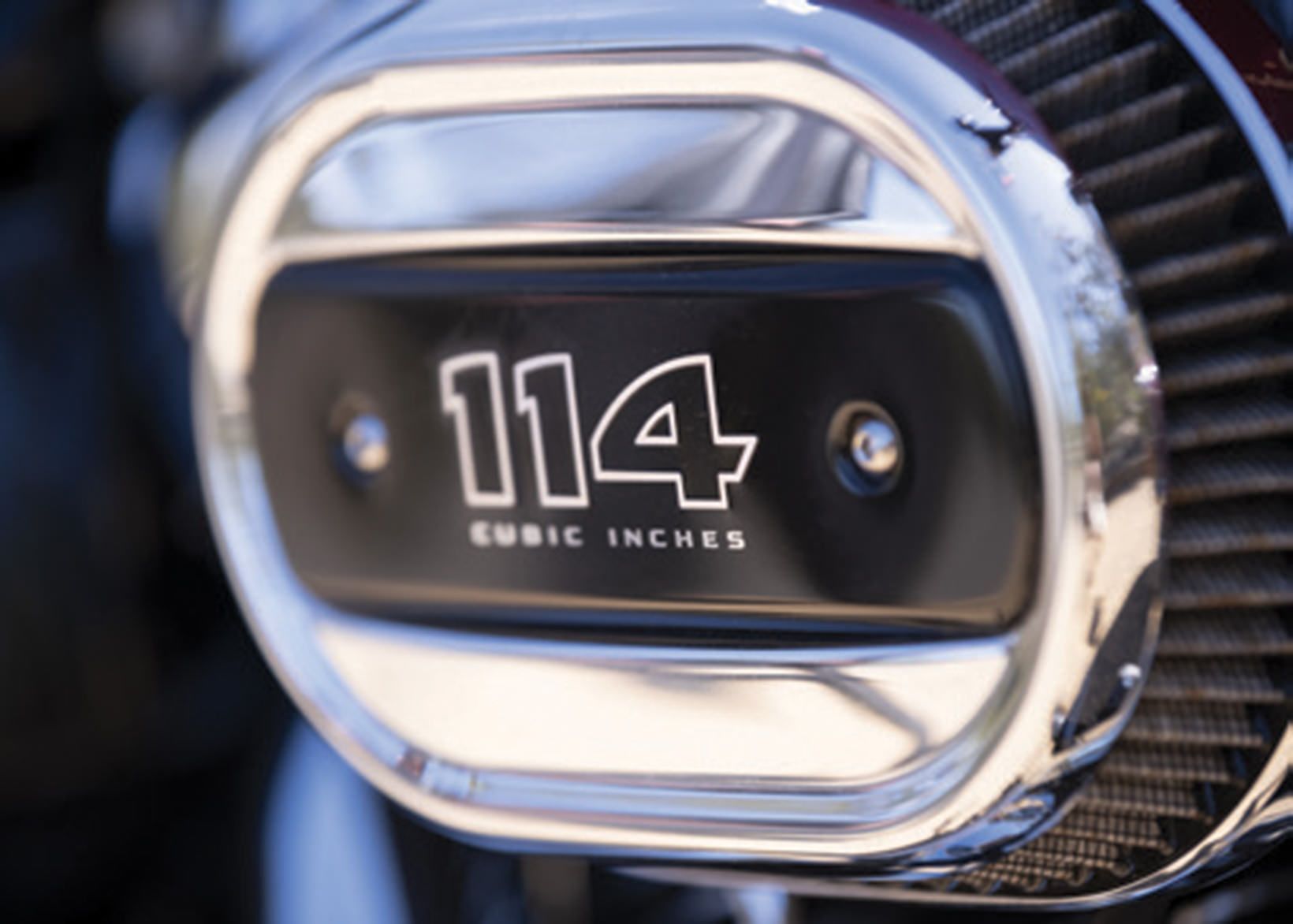 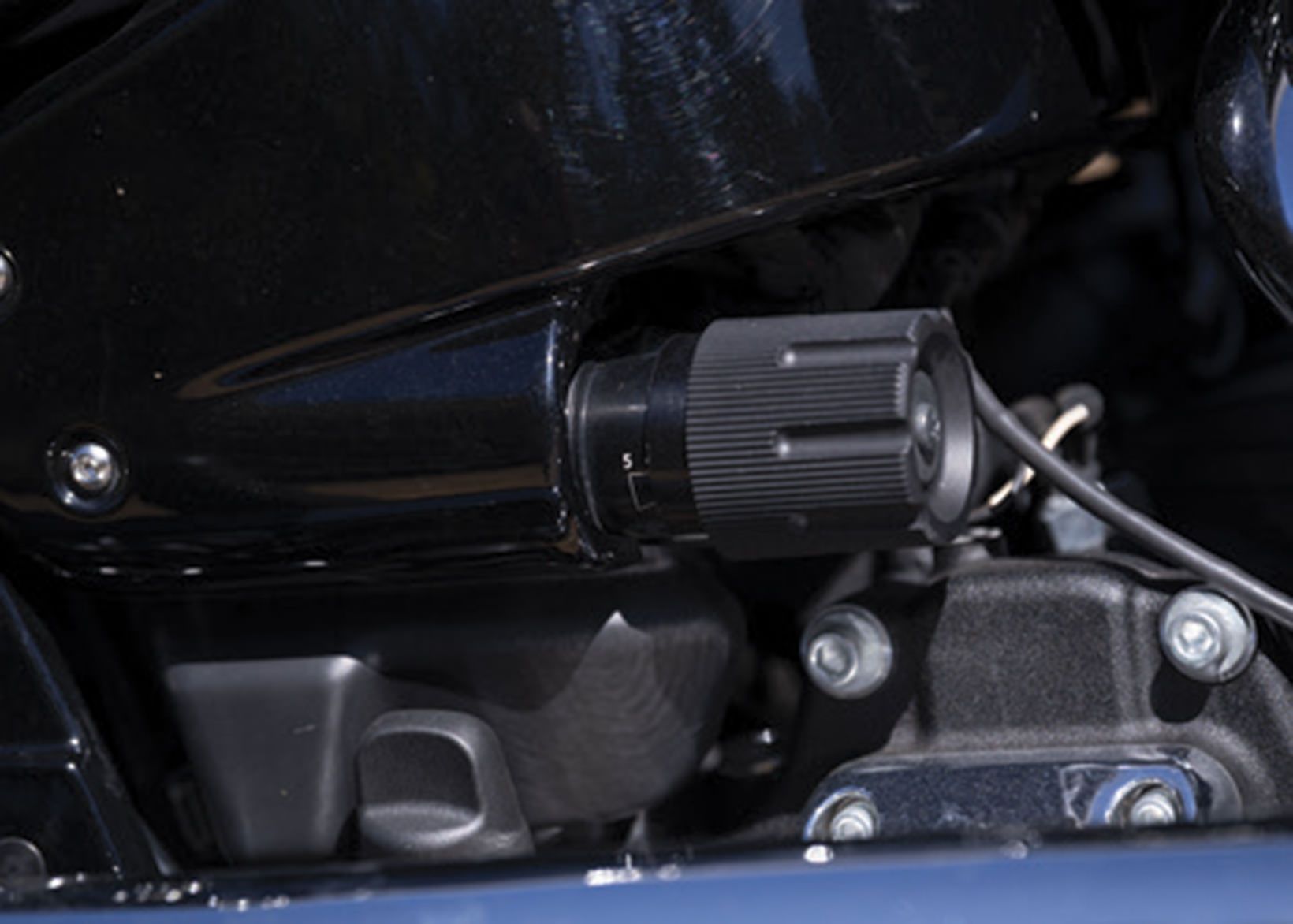 Showa steps in as suspension partner. There is some adjustability, but not a huge amount

Hold it on and flick through a few cogs and the scenery blurs and, once you manage to make out the digits on the neat, custom-looking but minuscule dash, you realise you’re in danger of losing your freedom if the plod catches you. The six-speed gearbox is a fairly clunky affair with a long lever throw, fairly typical of Harley really, and clicking into first is better described as a thunk – a cross between thud and clunk. Its mechanical engine noise isn’t as appealing as older models, although any noises the Breakout makes in standard form will become irrelevant when you fit your aftermarket exhaust, which I suspect many owners will do. 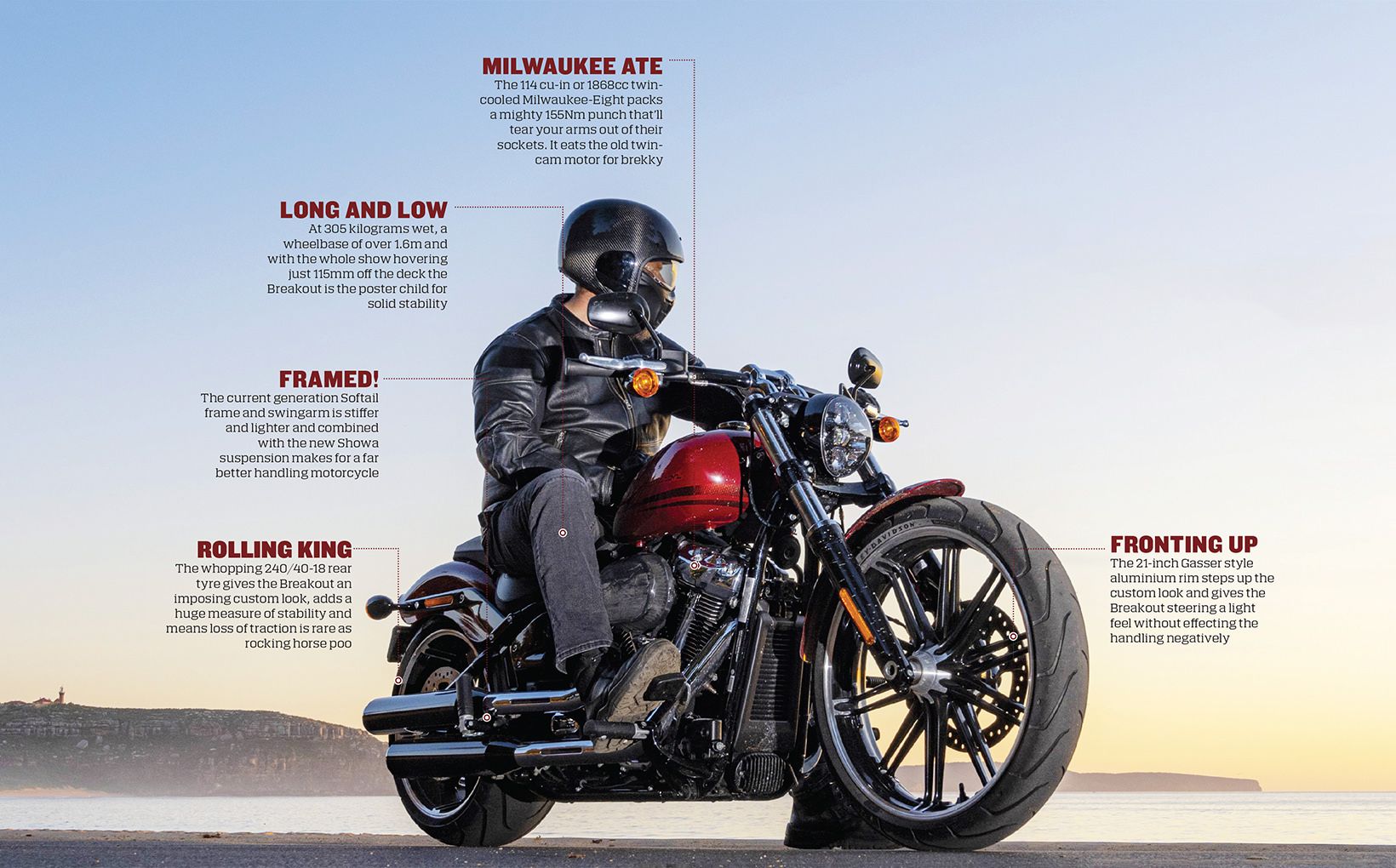 The Breakout’s ability to slyly gather velocity presents itself rather noticeably when you arrive in a corner and you suddenly realise that the Breakout is all about straight lines. The four-piston, ABS-equipped front stopper does an admirable job at pulling her up, but that’s a lot of bulk for any single-disc front brake setup to slow and the corner seems to arrive all too quickly.

Compared to the original Breakout with the older chassis, the 2020 model’s handling is light years ahead and arriving at the middle of the corner carrying speed is far less daunting than it used to be, but it’s no Sunday scratcher; it’s underbelly drags on fast corner entries or if you’re attempting to carry overly ambitious corner speeds despite the improved 26.8 degrees of lean angle on offer. 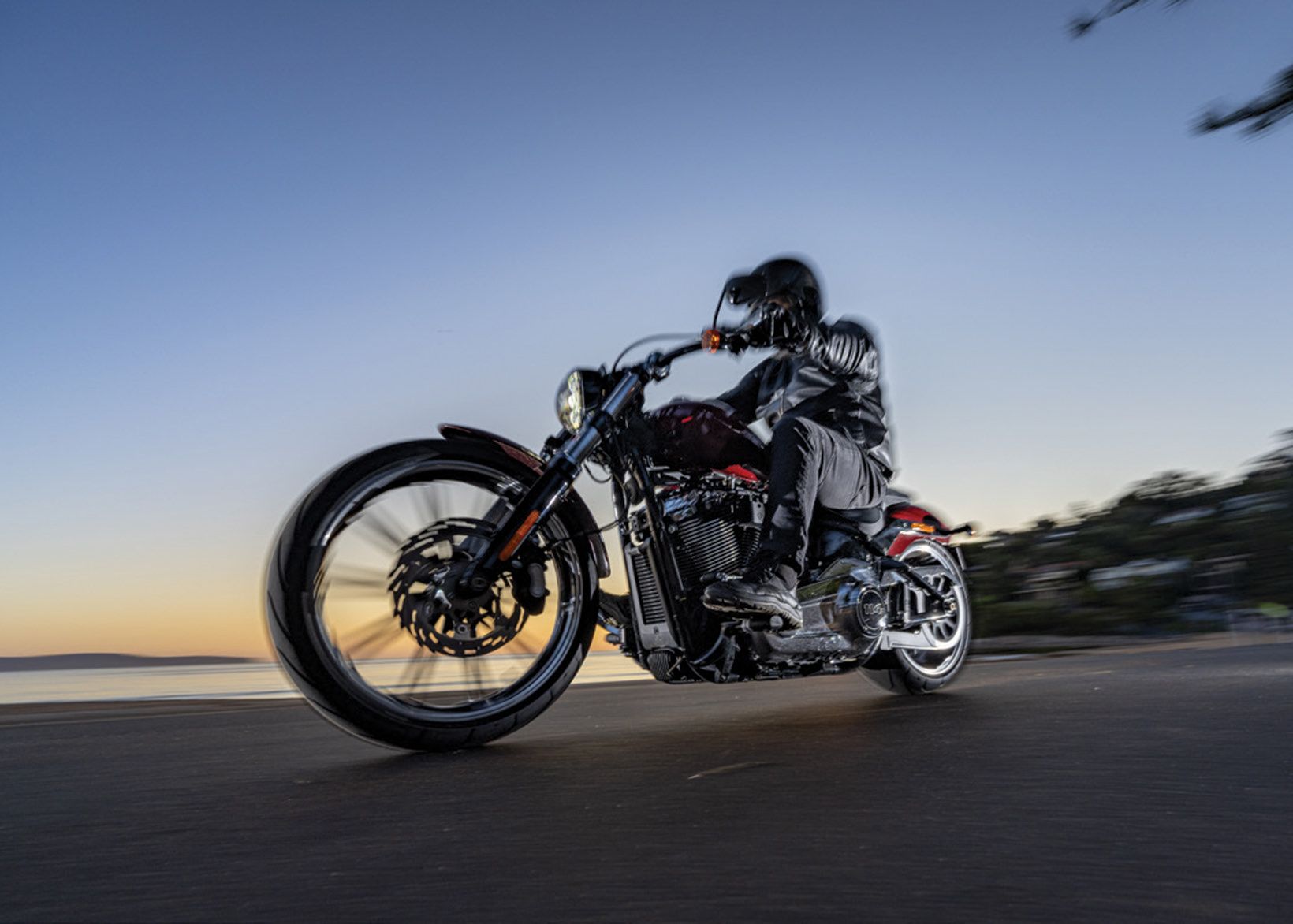 The Breakout’s raked-out geometry and fat 240-section rear rubber mean slow-speed cornering such as getting around a roundabout is a chore – it’s so stable it just doesn’t want to turn. But with liberal use of the twin-piston rear brake, some hard yakka and a bit of practice you learn to get it through most corners without too much stress, but your body position is crucial to keeping bits of your Breakout from being ground into the bitumen.

Except on the most acute of corner angles, the Breakout’s rock-solid stability is an asset; its weight is carried very low, in true cruiser fashion it feels lighter when you’re on the move than when pushing the bike around. The low, long and heavy Breakout feels like you could pull up and balance on the huge rear tyre, and threading your way through traffic to pole position at the lights is ridiculously simple and even a little bit fun. 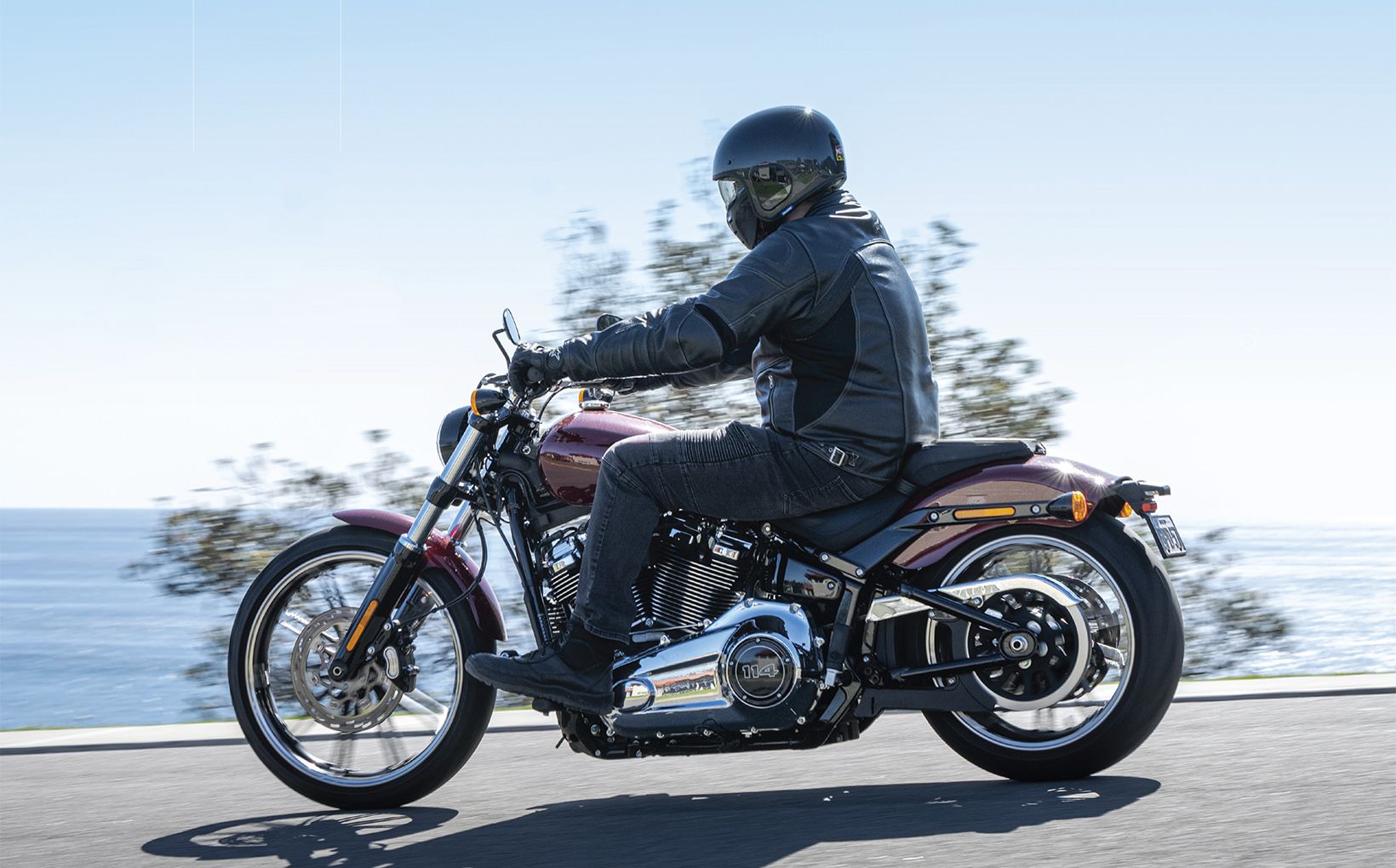 With 2018’s new stiffer frame and swingarm also came a new deck of suspension to push the Breakouts performance credentials upwards. A non-adjustable Showa 49mm dual-bending valve fork does its intended job well enough that it was not on my radar, a pretty good sign – if you’re not thinking about them, they’re not doing anything wrong.

The pre-load adjustable Showa rear shock does what it needs to, too, and is light years ahead of old Softail units; it soaks up all but the worst of road blemishes, never bottomed out and all while returning a nice, smooth ride. The reality with both ends is that you’ll run out of ground clearance before you can push the suspension beyond its limits. 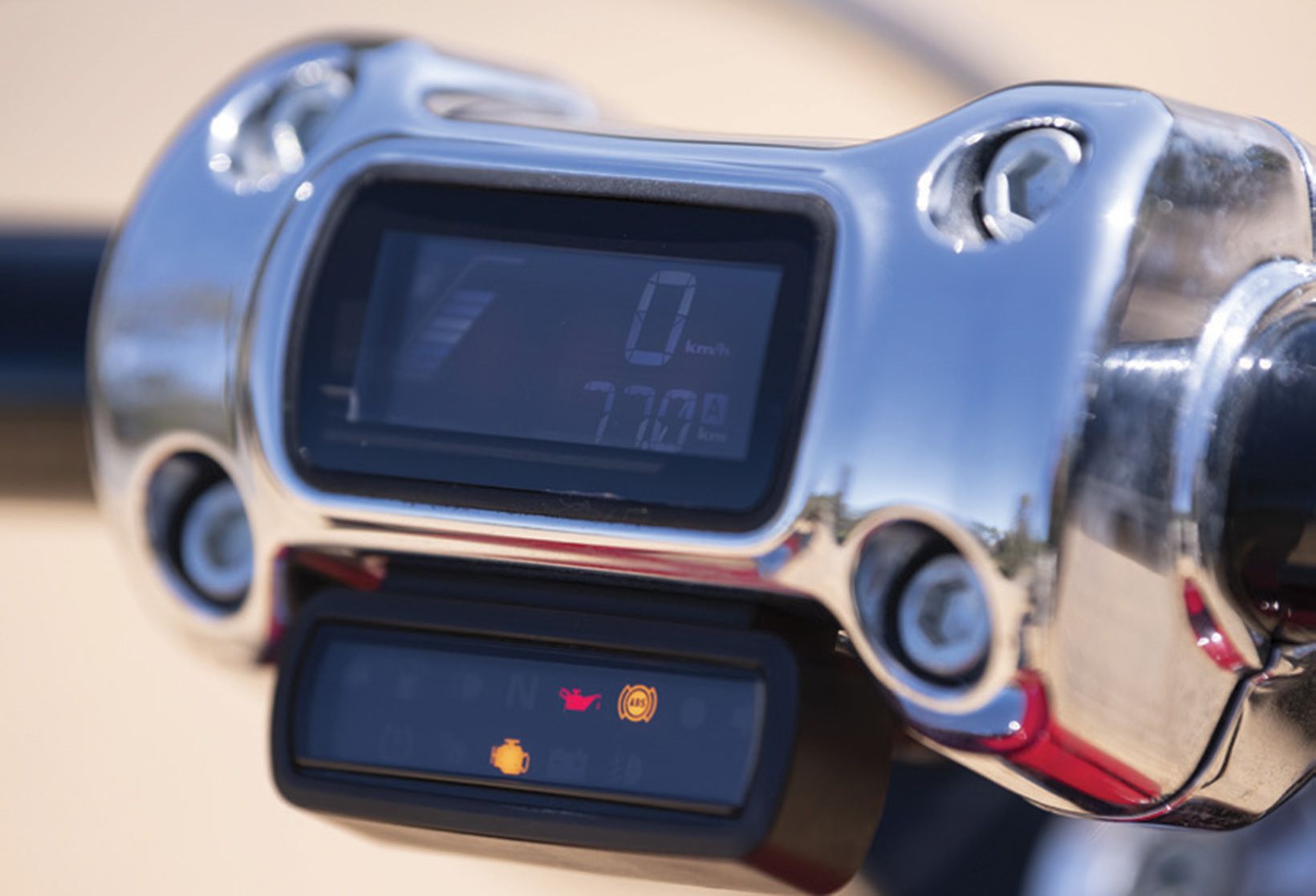 Dash is minimalist but with few electronic bells and whistles you won’t need a programmable TFT. 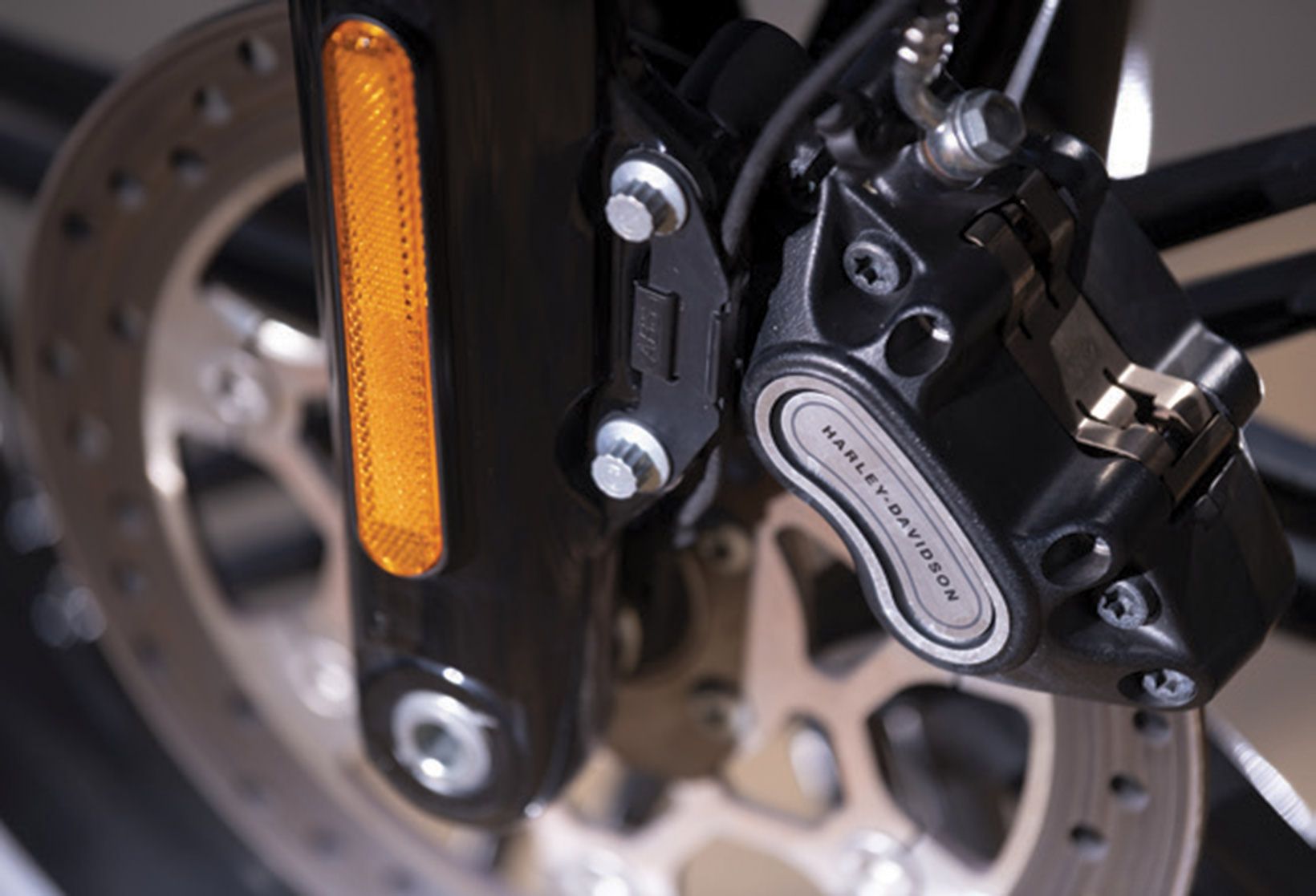 With 400kg of Harley and Vorst to pull up the single front disc deserves an award. 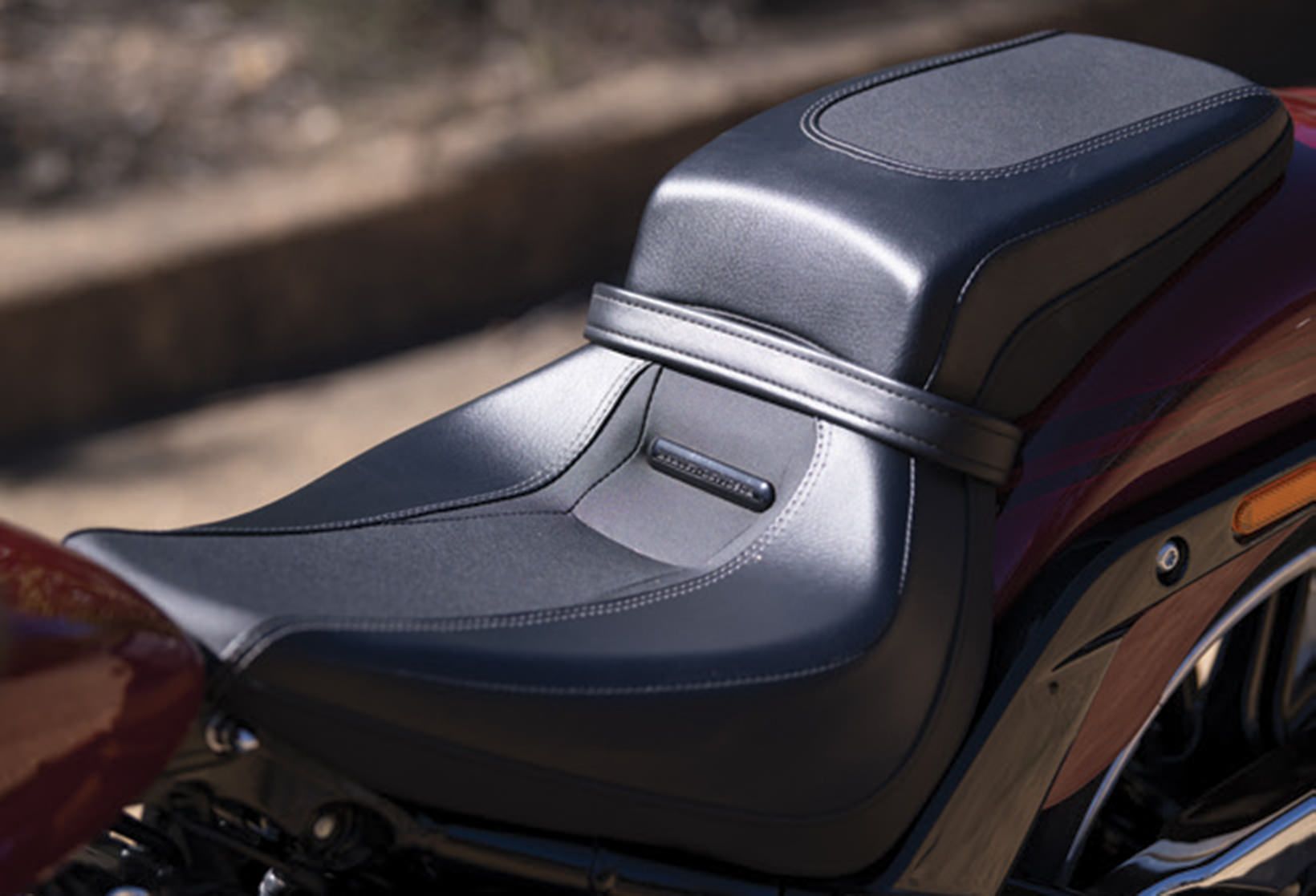 Harley gets the position and contour of the seat just right. 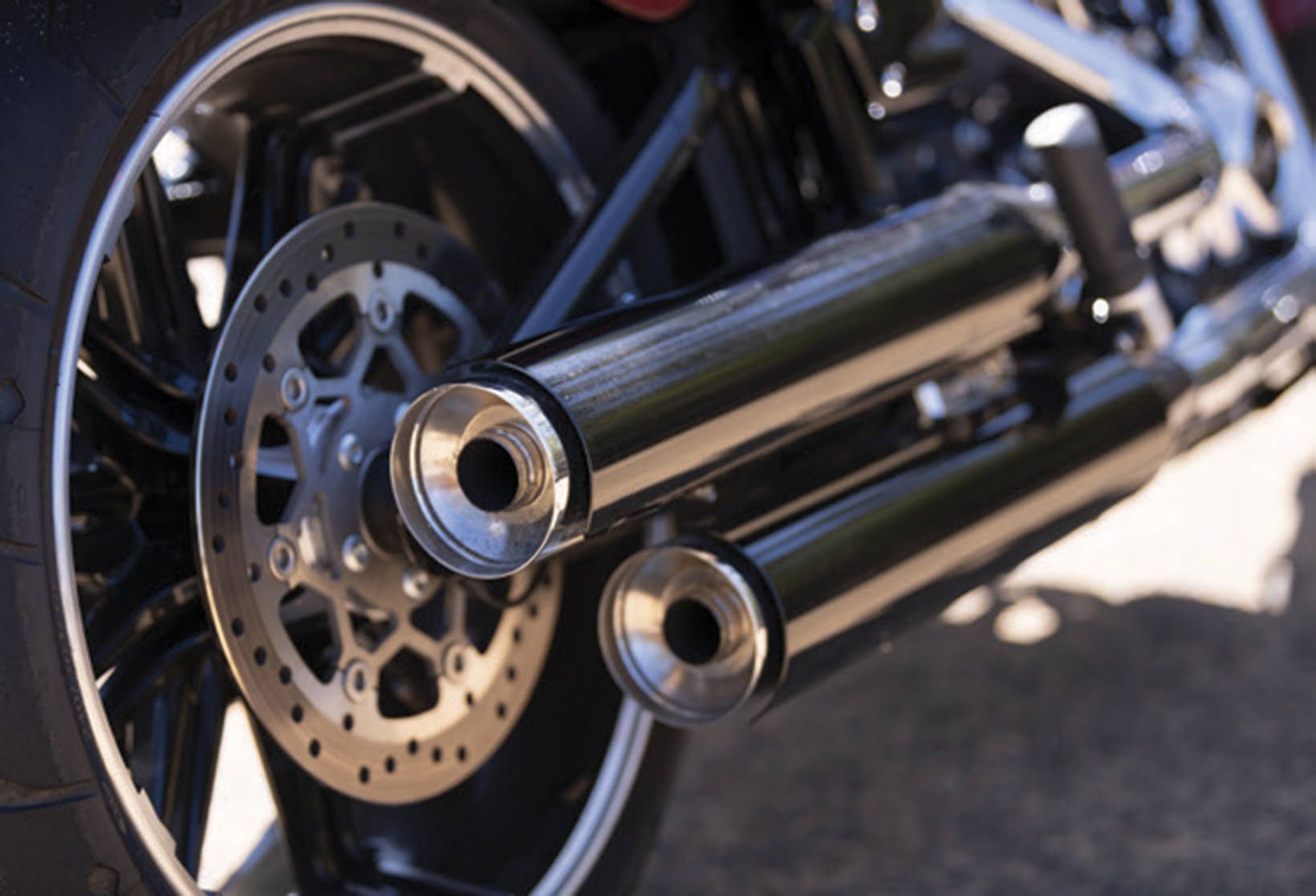 In the 2020s the pipes are all about sound and emissions – but they still look pretty darn good.

Like a lot of cruisers, the Breakout looks like it’s going to drive maximum impact through your lower back as you sit perched on your tailbone, but the longish reach to the bars and foot position on the forward controls takes the weight off your tailbone and, combined with the well-padded and shaped seat, return a bloody comfy ride. Add to the decent rear Softail suspension and you’re left with little to complain about in the comfort department – even when in the saddle for a good portion of the Breakout’s 13.2-litre tank capacity. The seat is shaped to provide a small back support that’s perfect to stop you sliding off the back when you open up the tap.

It might be reasonably comfortable, but with zero wind protection and its petite tank, it’s no tourer. If you are doing big miles, Harley has a bunch of bikes better suited to the task, the Breakout will do a day trip, sure, but it’s a bike for cruising the cities and towns and hitting the beaches.

For $35K, it’s technologically anaemic. The rider aids are limited solely to ABS – there’s no modes, TFT screens or traction control to be seen – apart from the massive amount of rubber on the rear end that glues the Breakout to the road. 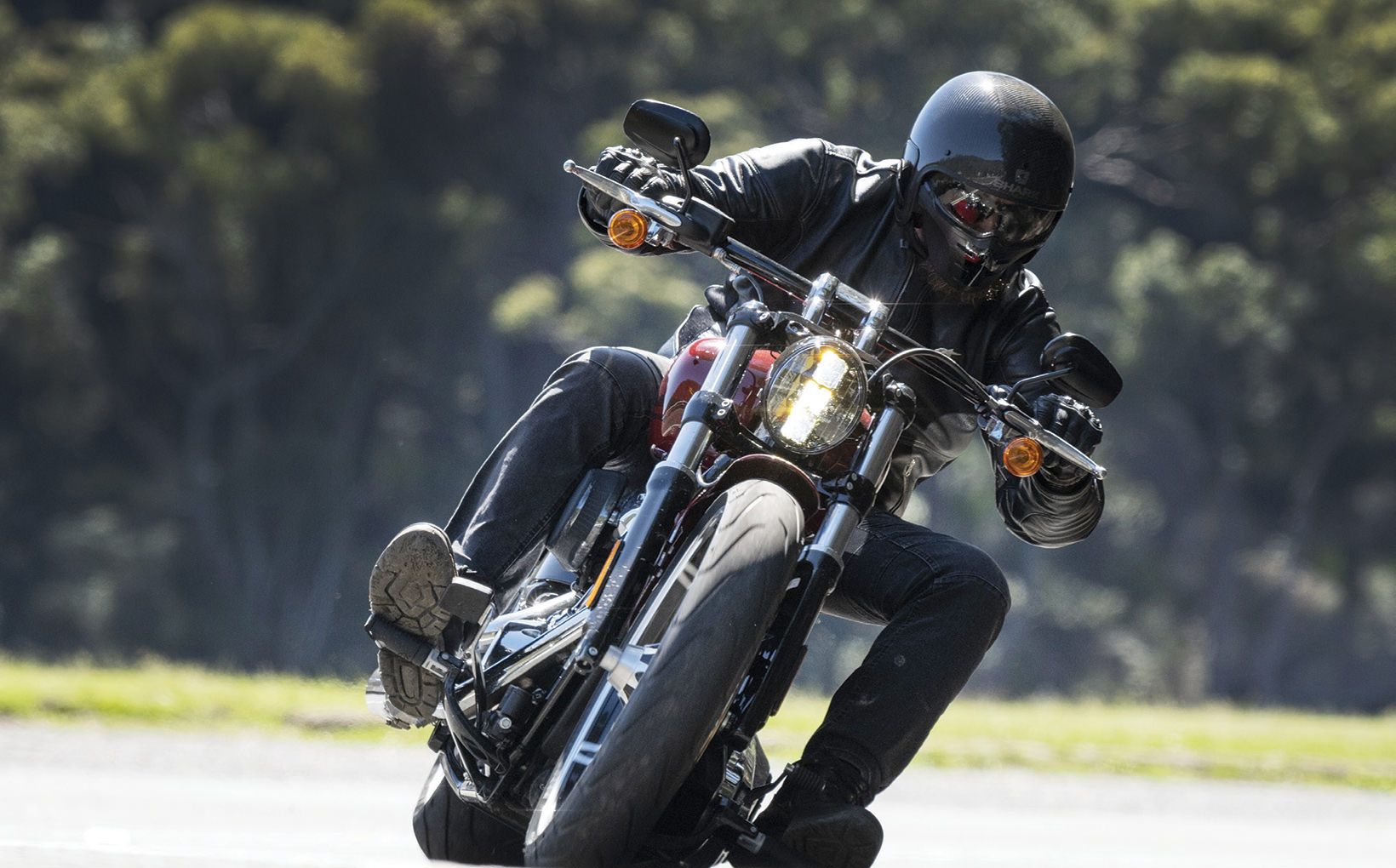 The 117 cubic-inch Milwaukee-Eight engine is a ripping torque monster, but there’s more power to be had from Harley’s own FXDR, so grunt isn’t the reason for its success. Its reasonably comfortable, even for a decent stretch, but there’s cruisers out there which do that better and at $34,250 (ride away) it isn’t cheap, and you don’t get the performance or technology for your buck that you get with some other brands, so that can’t be it either. 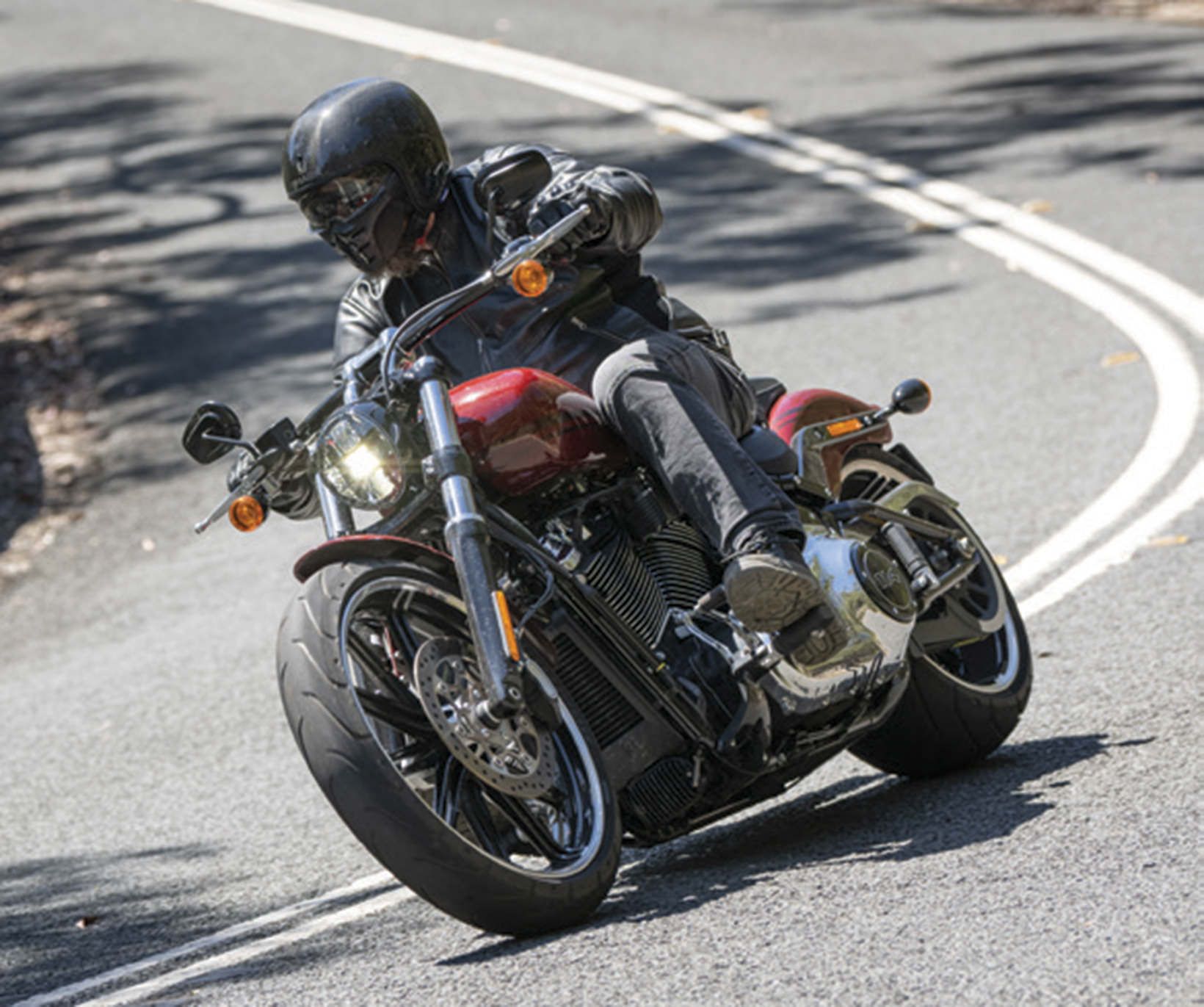 So why is the thing so damn popular?

The Breakout is a classic case of being more than the sum of its parts and after spending some quality time with the beast I reckon it comes down to this; it looks bloody tough and it can pluck you out of your suit-wearing 9-to-5 existence and make you feel like someone you’re not while you’re riding it – and who doesn’t need a bit of that at the moment. Bung a loud exhaust on it and that vibe would be magnified. It’s that intangible Harley factor, the vibe, the street presence, the status, call it whatever you like. You either get it or you don’t, but on the Breakout it’s easy to get. 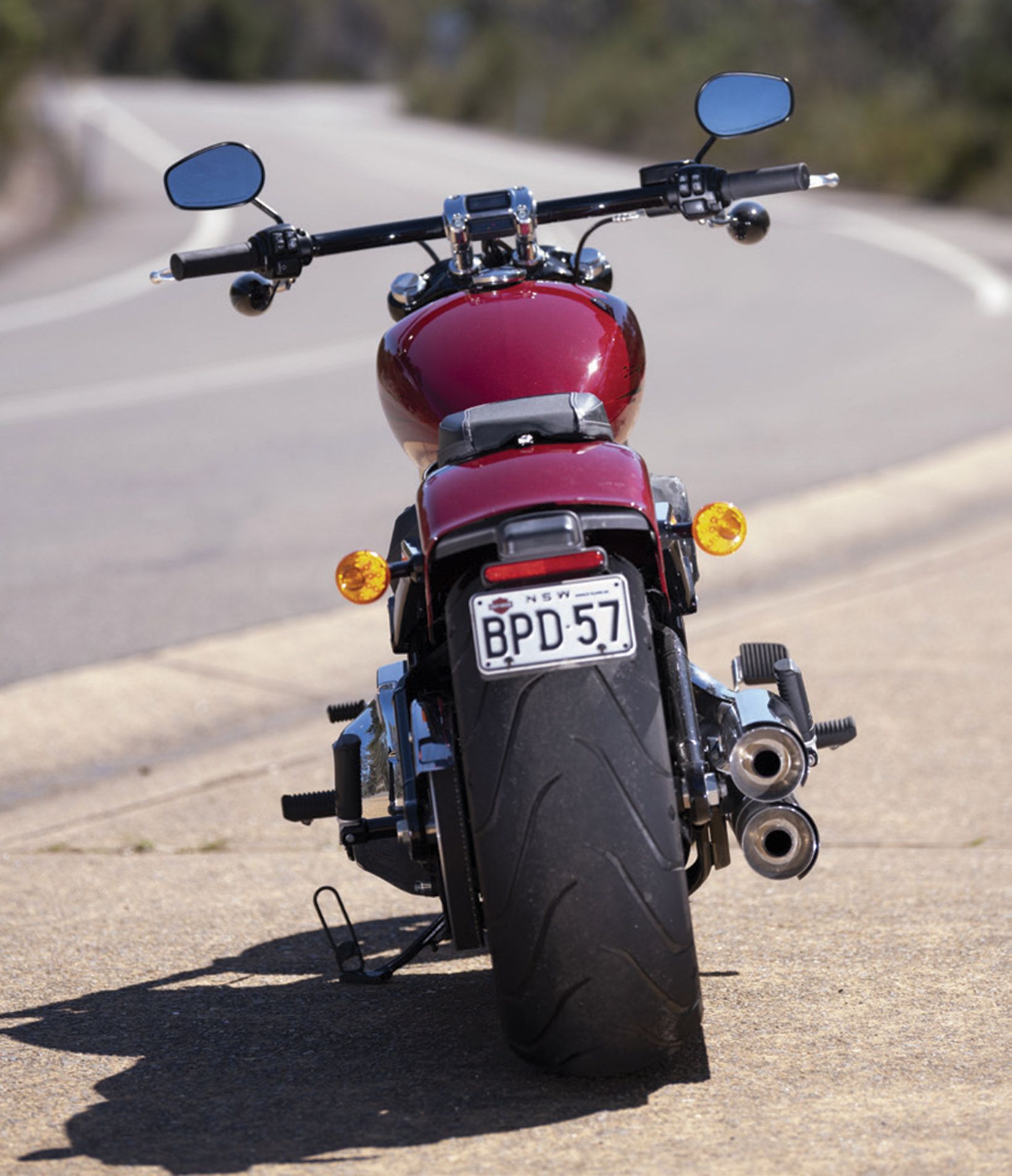 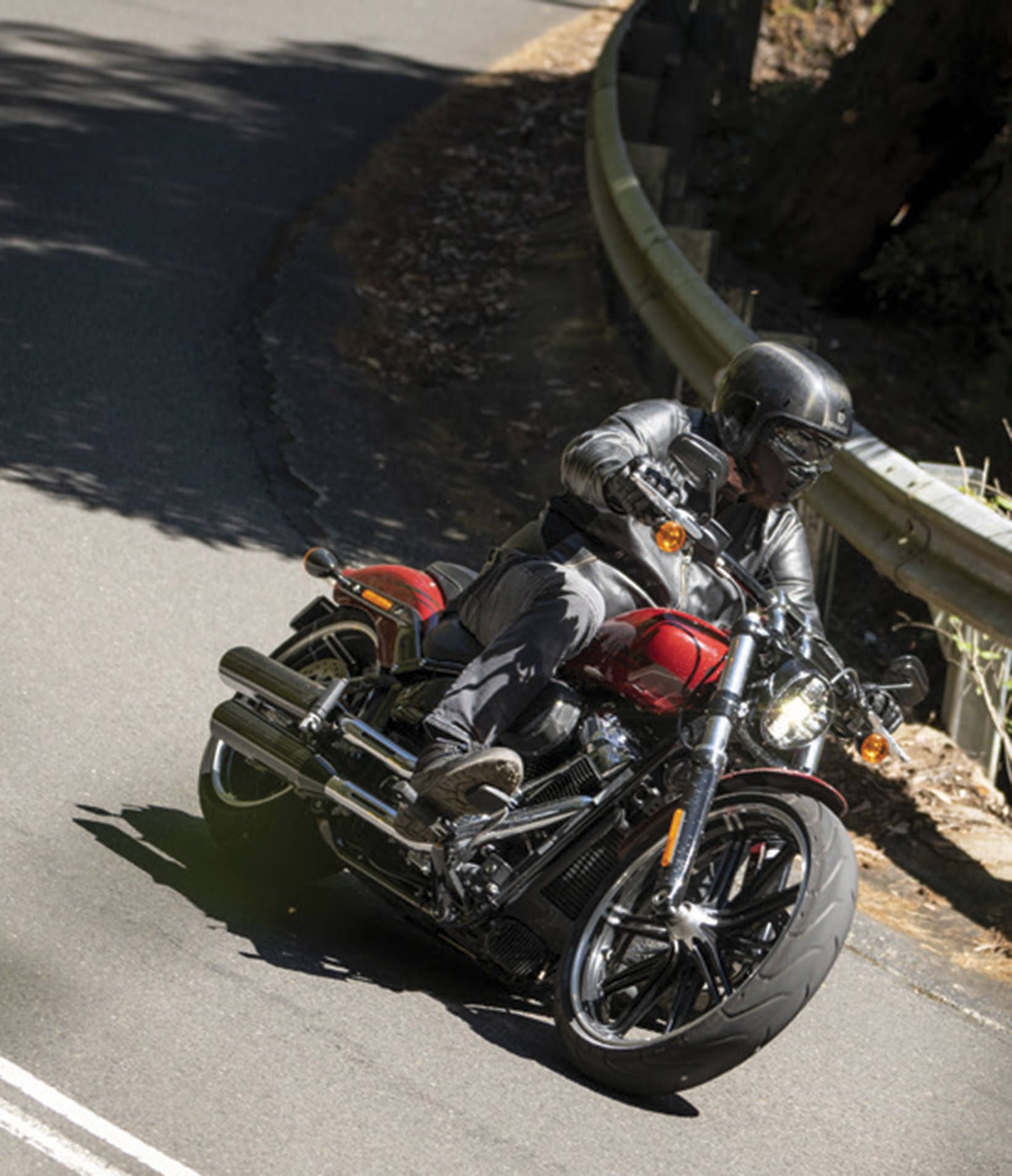 A huge factor in its appeal also lies simply in its chopper-style looks, it’s modern and old school all at once and combined with the 21-inch front wheel, has a genuinely convincing custom look. It’s not about its spec sheet, motorcycling is passion, and owning a motorcycle in this price bracket is a thing of passion. Sometimes we derive that passion from the performance of our motorcycle, but if our bike doesn’t make us stand back and admire its look, there’s a good chance it won’t be in our shed anyway.

There are so many amazingly capable and sophisticated bikes out there that don’t sell particularly well and the Breakout proves that it’s not always about about on-paper performance. It’s got to stir something within us before we can fork out our hard-earned. And that’s what’s made this bike such a roaring success. 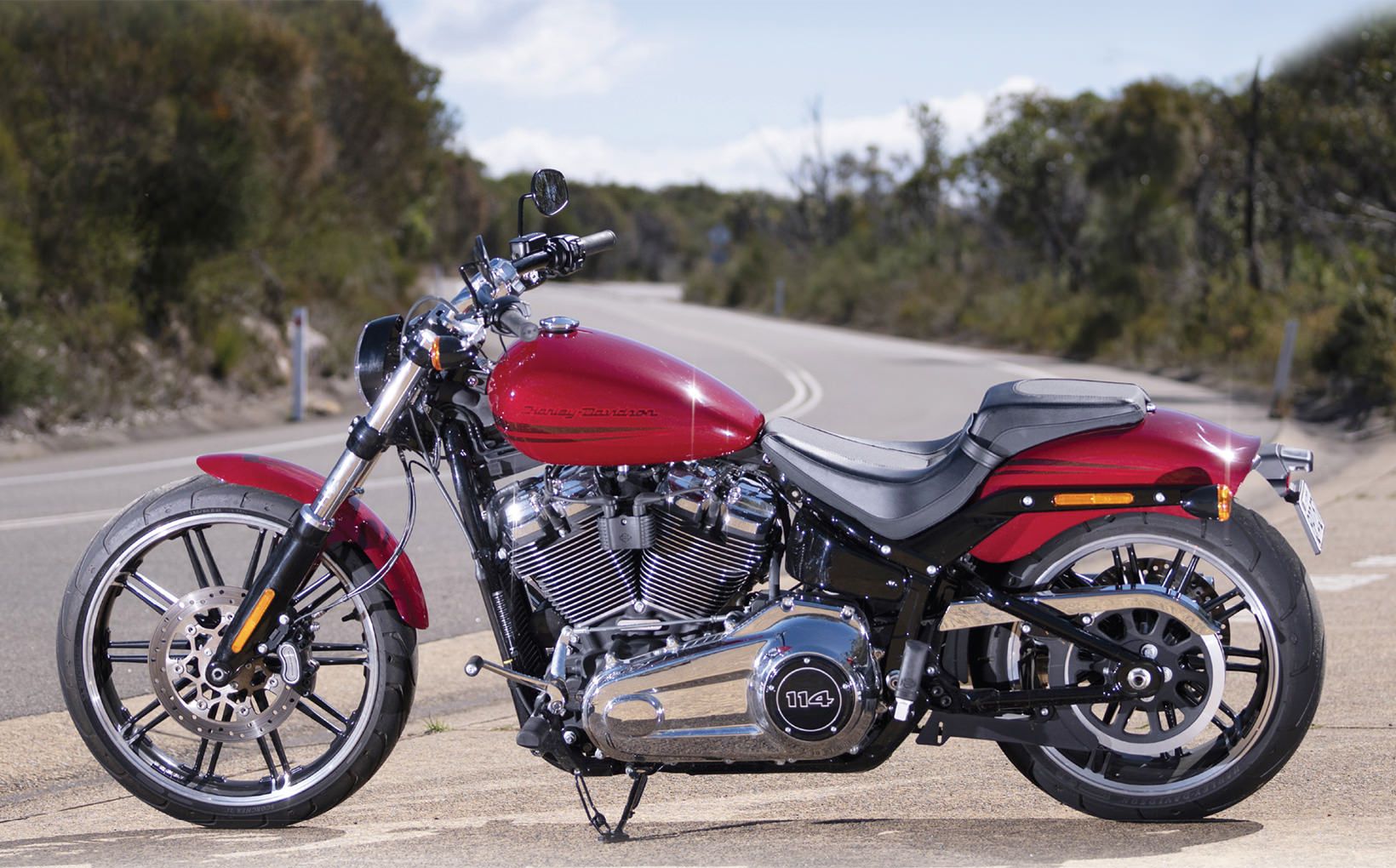