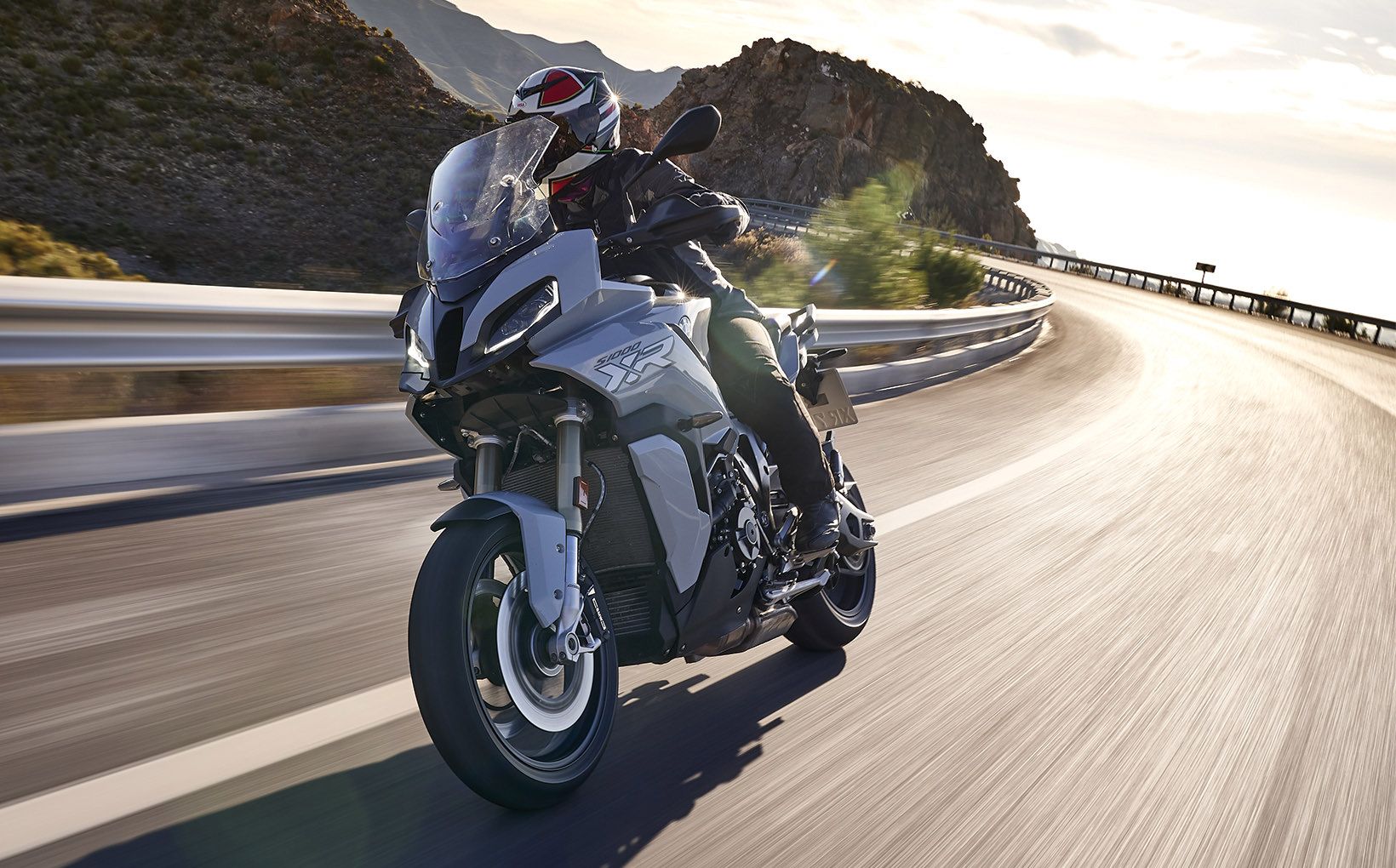 It has always baffled me why Australians didn’t fall in love with BMW’s S 1000 XR. Jam packed with equal parts performance and practicality, on paper there’s very few motorcycles better equipped for a fast lap of our National Highway 1.

Introduced in 2015, its flawless execution swiftly earned it AMCN’s coveted Motorcycle of the Year gong, but over the next 12 months, the-then $22,190 (plus on-road costs) failed to leave any kind of mark on Aussie buyers.

In the 12 months of 2016 – the year new bike sales in Australia enjoyed its most successful result in seven years – BMW sold just 158 examples of what was a new benchmark in roadbike technology. Compare that to Honda’s achievement of 740 sales of its equally new Africa Twin in the same period, and it’s pretty hard to fathom. And in the three years since, only 385 more have found new homes in Aussie garages.. 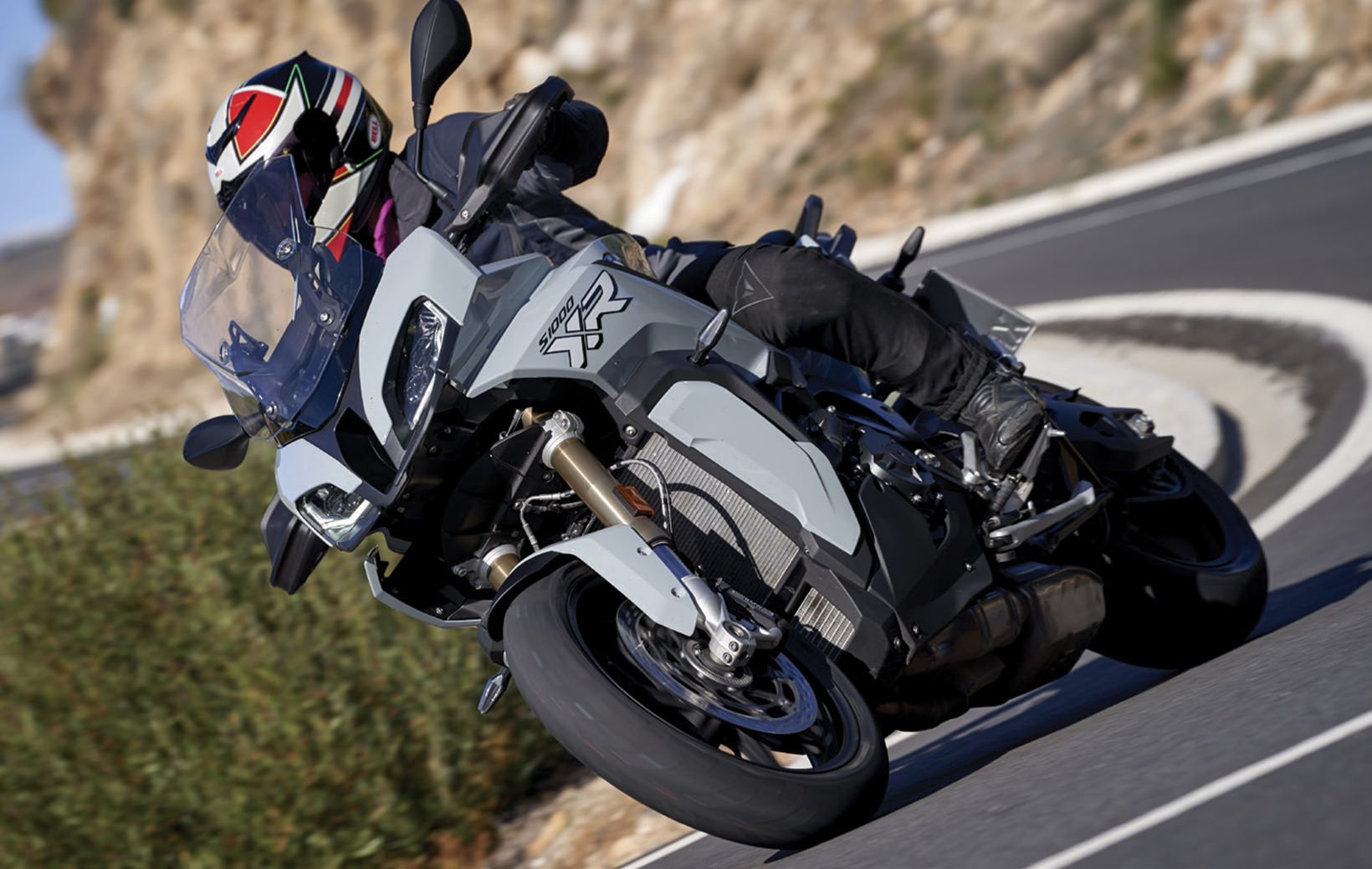 In the same four-year period in the UK however, almost 3200 new S 1000 XRs were sold. And it was a similar story of success in many other markets including Germany and the US. In fact it’s one of a number of two-wheeled reasons why BMW posted its ninth successive sales growth year in 2019, and this latest 2020 version is, according to BMW Motorrad’s head honcho Dr Markus Schramm, one of the reasons he’s “very convinced we will see a 10th.”

Of course he’s going to say that. He was talking to a group of motorcycle journalists from all over the globe, assembled in Spain for the world launch of what is the first major update of the model since it was introduced

“It’s no update at all, actually,” interrupted the new bike’s product development manager Max Renko when I was discussing the bike over dinner. “It’s a completely new bike. The only thing that was carried over are the mirrors, the handguards, and some internal parts of the multi-controller wheel.”

But despite this, the 2020 S 1000 XR missed out on the firm’s headline-grabbing ShiftCam engine found in the latest version of its fully-faired S 1000 RR sibling. Given all of the changes thrown at this so-called completely new bike, why not include it, Max? 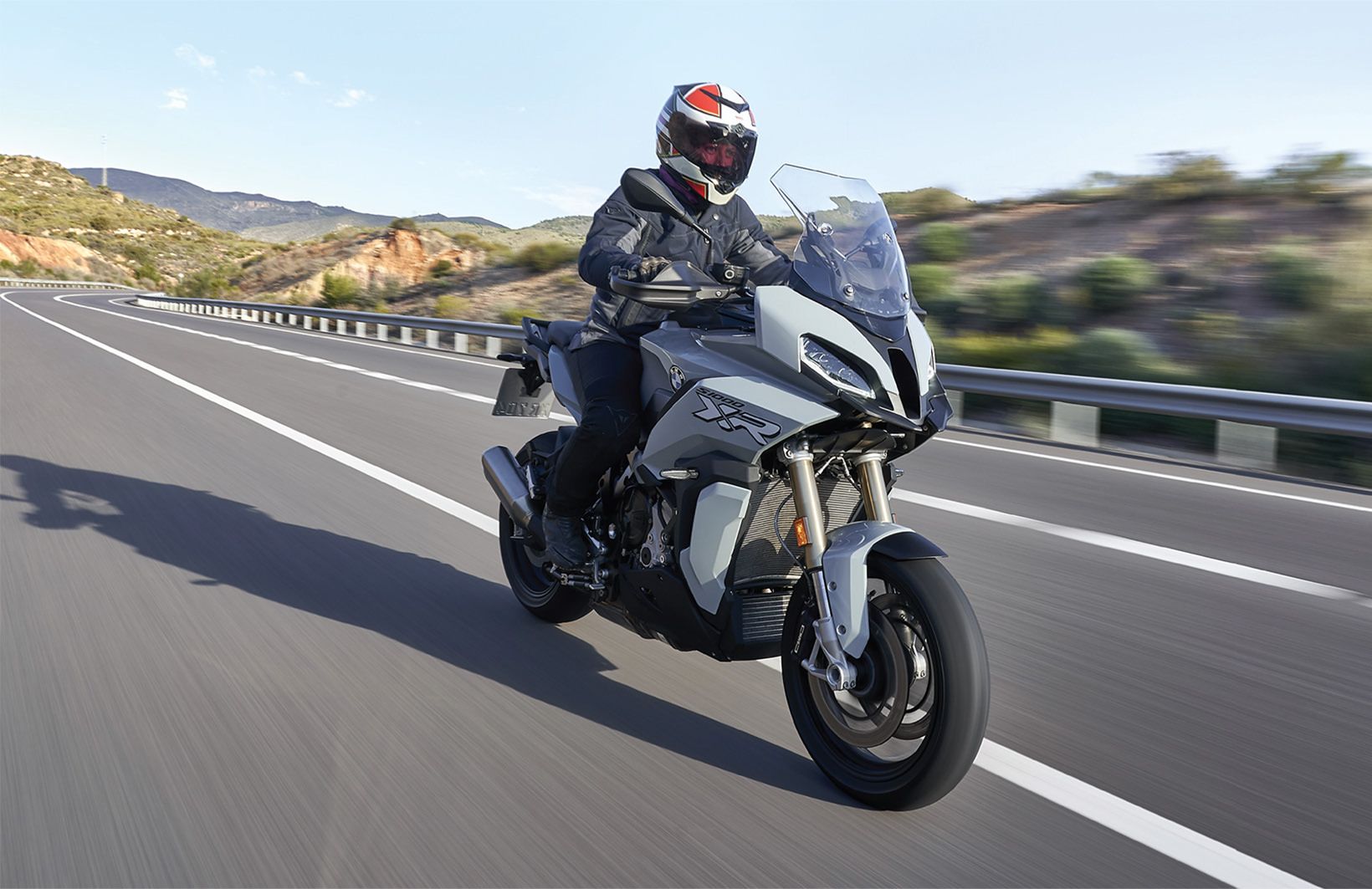 The previous model failed to leave any mark on Aussie buyers.

“You hardly need 14,800rpm on street bike,” he says. And of course he’s right. “And we already had to limit the torque in first gear, otherwise you’d be doing 150km/h in first.

“For marketing, it would make my life very easy just to have the ShiftCam, but in the end I need to balance customer retail price and real-world benefits. ShiftCam would make for more like Shift-Scam! You would sell the customer something he or she doesn’t really get to use.”

Another really practical reason for not using the complex ShiftCam version of the 999cc inline-four cylinder engine is the 2020 XR’s engine is 12mm narrower and a full 1.5kg lighter than the latest Superbike’s powerplant. 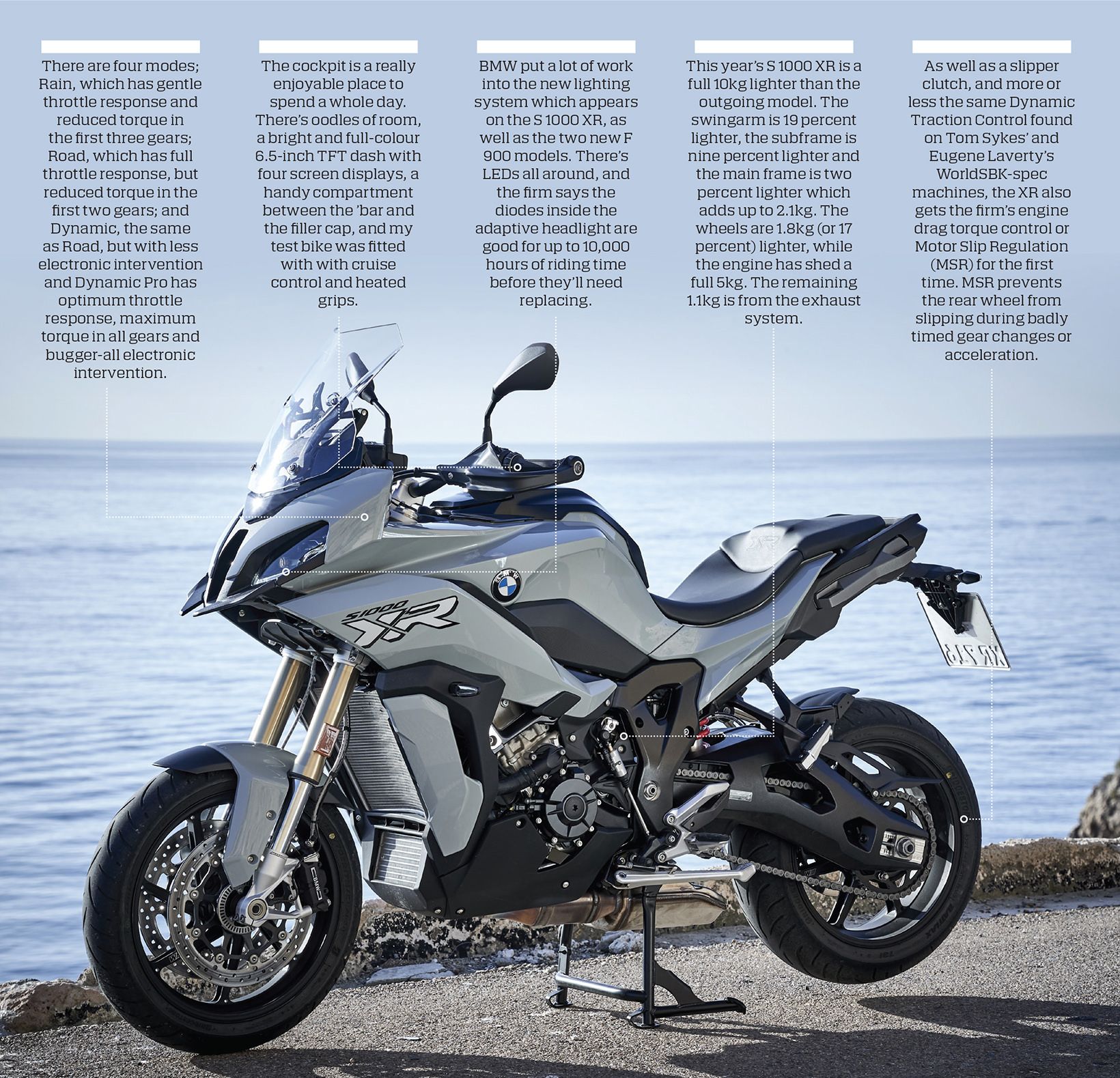 Based on the older S 1000 RR, this new engine is 5kg lighter than the one it replaces, but to you and I and everything we would use this motorcycle for, it still very much has Superbike-like performance. Though cleverly, it’s only really when you go looking for it. Otherwise, bumbling around town, it’s predictable without being boring, and a relatively new rider could jump on it and feel reassured by its enormously intuitive ergonomics and orderly manners.

But stretch its legs on the highway en route to your favourite section of twisties – in my case it was northeast of Almeria to an incredible series of roads which threaded themselves through a heavily forested mountain range – and it all just starts to make perfect, practical and high-performance sense. 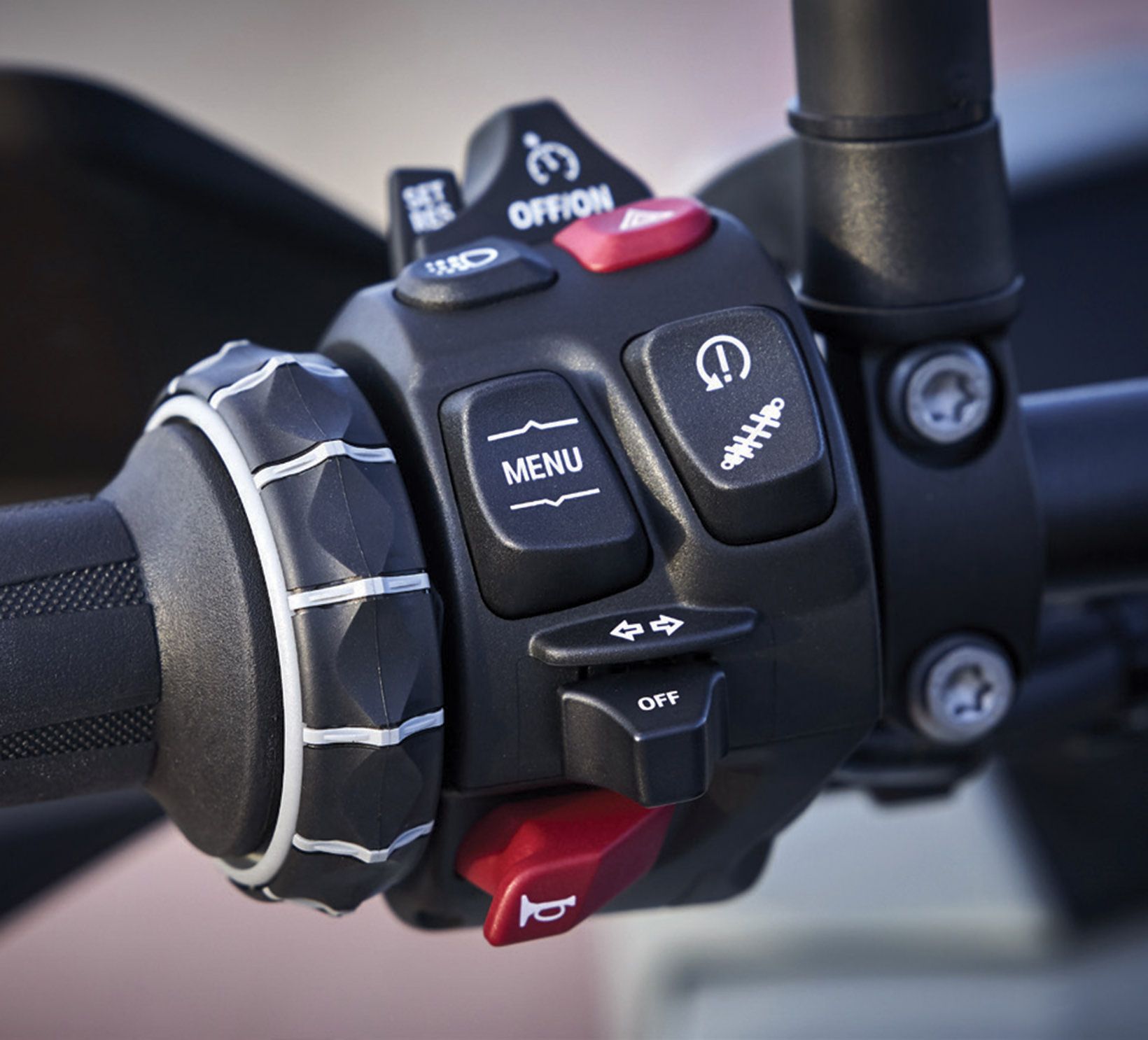 Take a good look at the menu thumbwheel; it’s one of the few carryover parts from the previous model 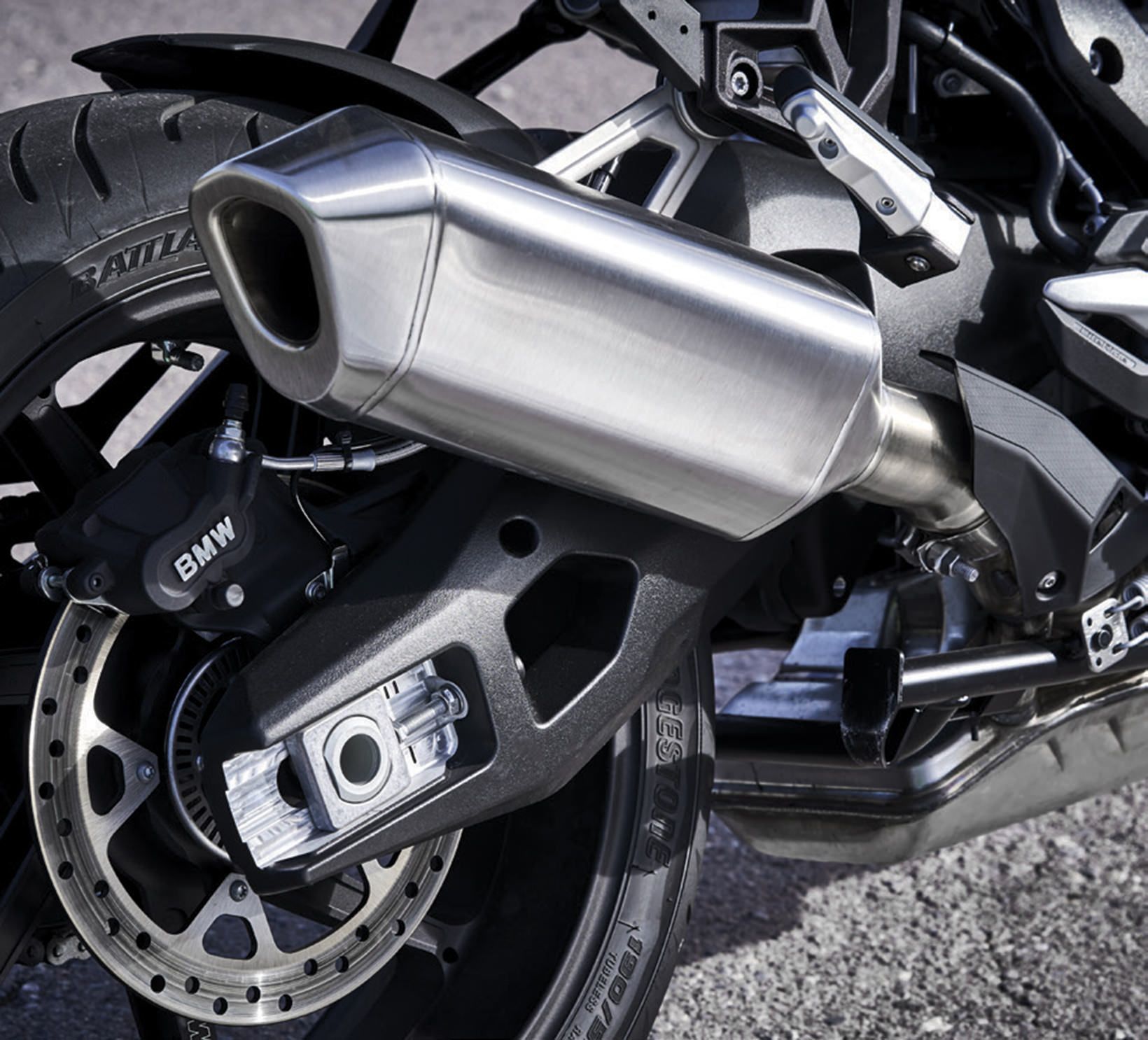 The exhaust is 1.1kg lighter than on the old model, which is a big contribution to the weight saving

Merging onto the highway as we left the built-up area, I kept the throttle wide open and made my way slowly and deliberately through the gears using BMW’s nigh-on perfect quickshifter, and very quickly remembered why I’ve loved all iterations of this charming engine. But having just stepped off the V-twin-esque F 900 XR (AMCN Vol 69 No 17) and having experienced just how suited the physically smaller, twin-cylinder engined bike is to carving through the tight and often narrow roads, I had my doubts about just how adept the big inline-four was going to perform in the same situations.

Here on the highway, though, it’s a dream. The lead rider opted for a cruising speed of 170km/h – it’s normal in this part of the world, I’m told – and at that speed, with the screen still in the lowest of two settings, I’m in this perfectly protected cocoon of still air. Composed and quiet, it’s only the full-colour TFT dash beaming back at me that gives away the speed. Aided by my 164cm stature no doubt, there’s plenty of room to move about on the wide, flat seat and I very quickly settle into that comfortably relaxed and alert riding position only afforded by this genre of motorcycle. 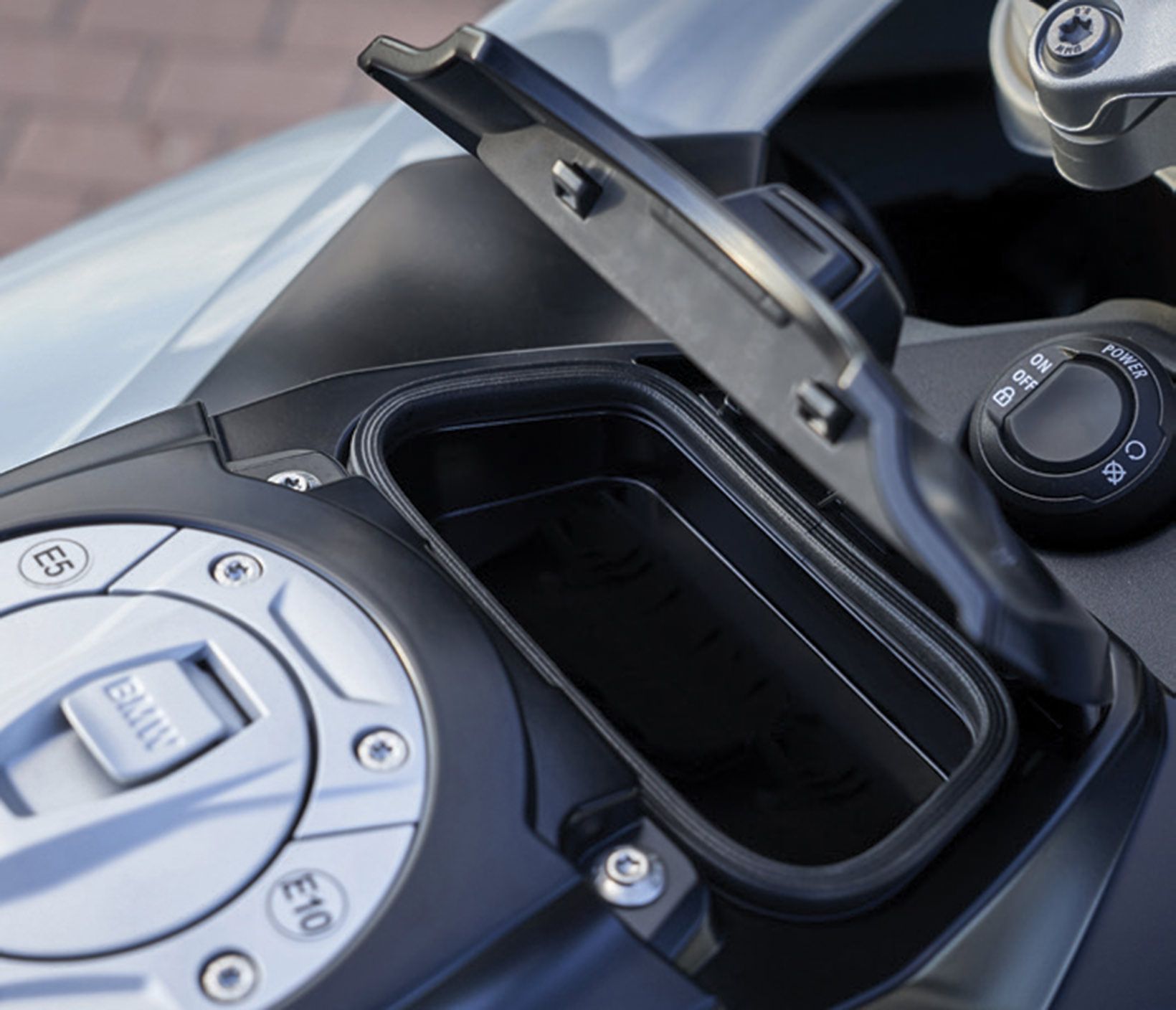 There’s a neat cubbyhole for your phone. 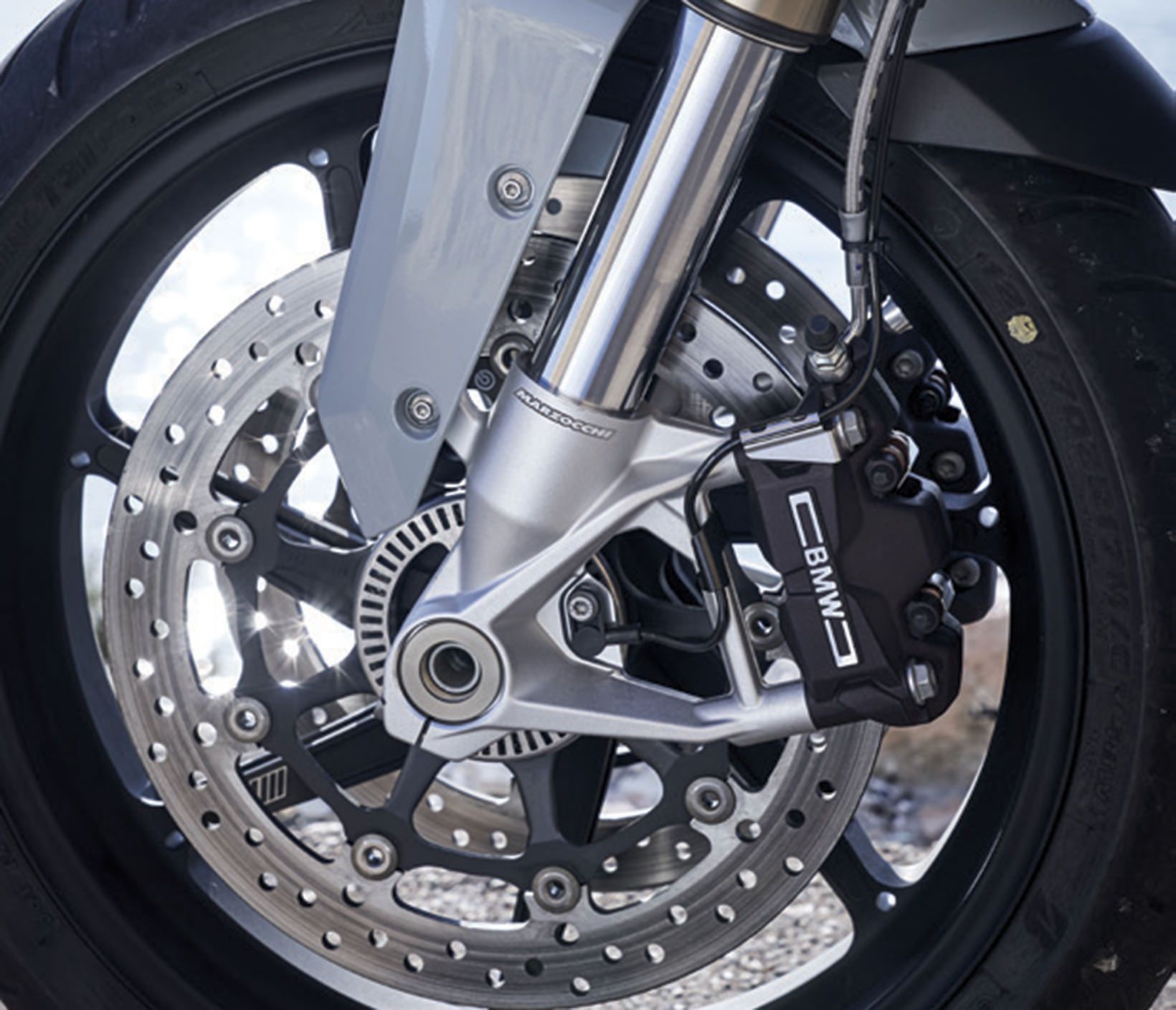 Stopping power is much more than most riders will ever need. 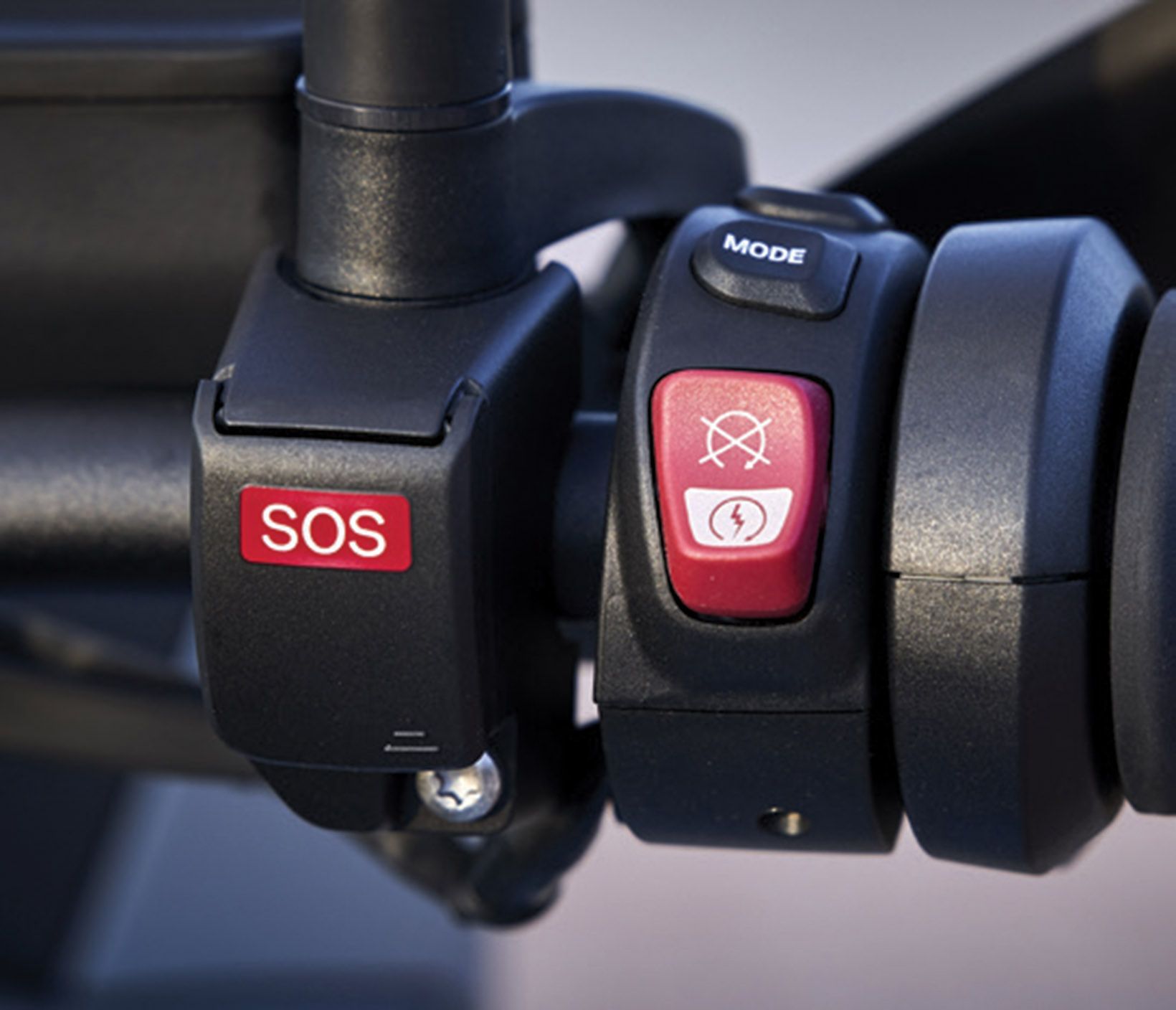 SOS button is one that will become a regular feature on 21st century motorcycles. 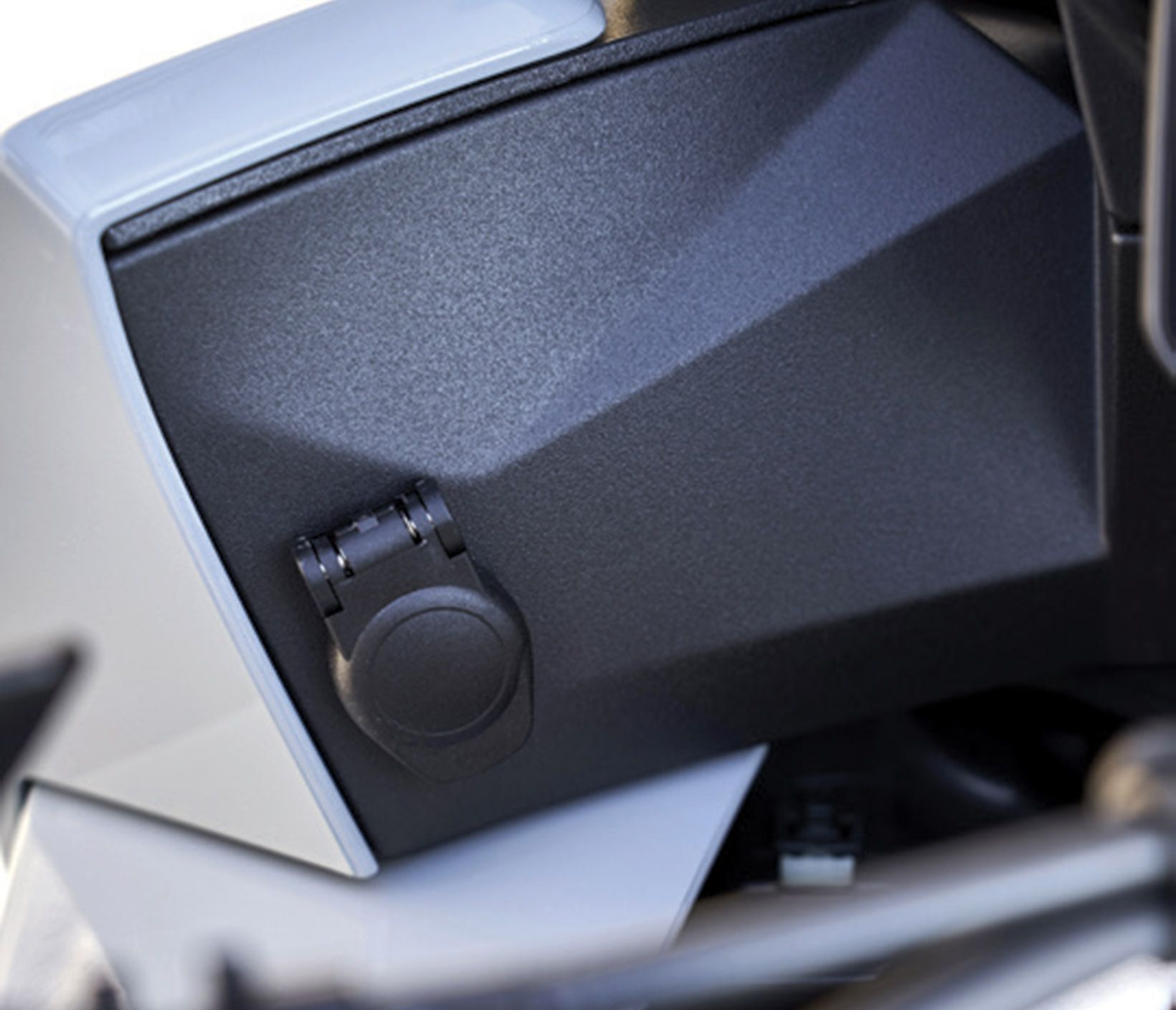 So are accessory plugs.

When the mountains start to close in and the roads begin to narrow, you slide forwards and up your concentration, because it’s really quite remarkable how such a large, and frankly top-heavy motorcycle, goes from being a supple and mild mile-muncher to a quick and really agile mountain mover.

Between a slick execution of some sophisticated electronics and very deliberate state of tune, it’s a bike that does everything brilliantly. Even, despite my doubts, in and out of tight and technical corners. It turns out that’s another benefit of opting against the ShiftCam technology.

“It allowed us to focus on the midrange,” explained Max when I ran into him again

during our ride the following day. “To optimise everything around the inlet and exhaust cam – like headers, intake and airbox and everything for the mid-range torque. So in the end, even without the ShiftCam, we managed to get up to 10 percent more midrange torque than the RR has, plus a very linear torque curve for predictability coming out of corners.” 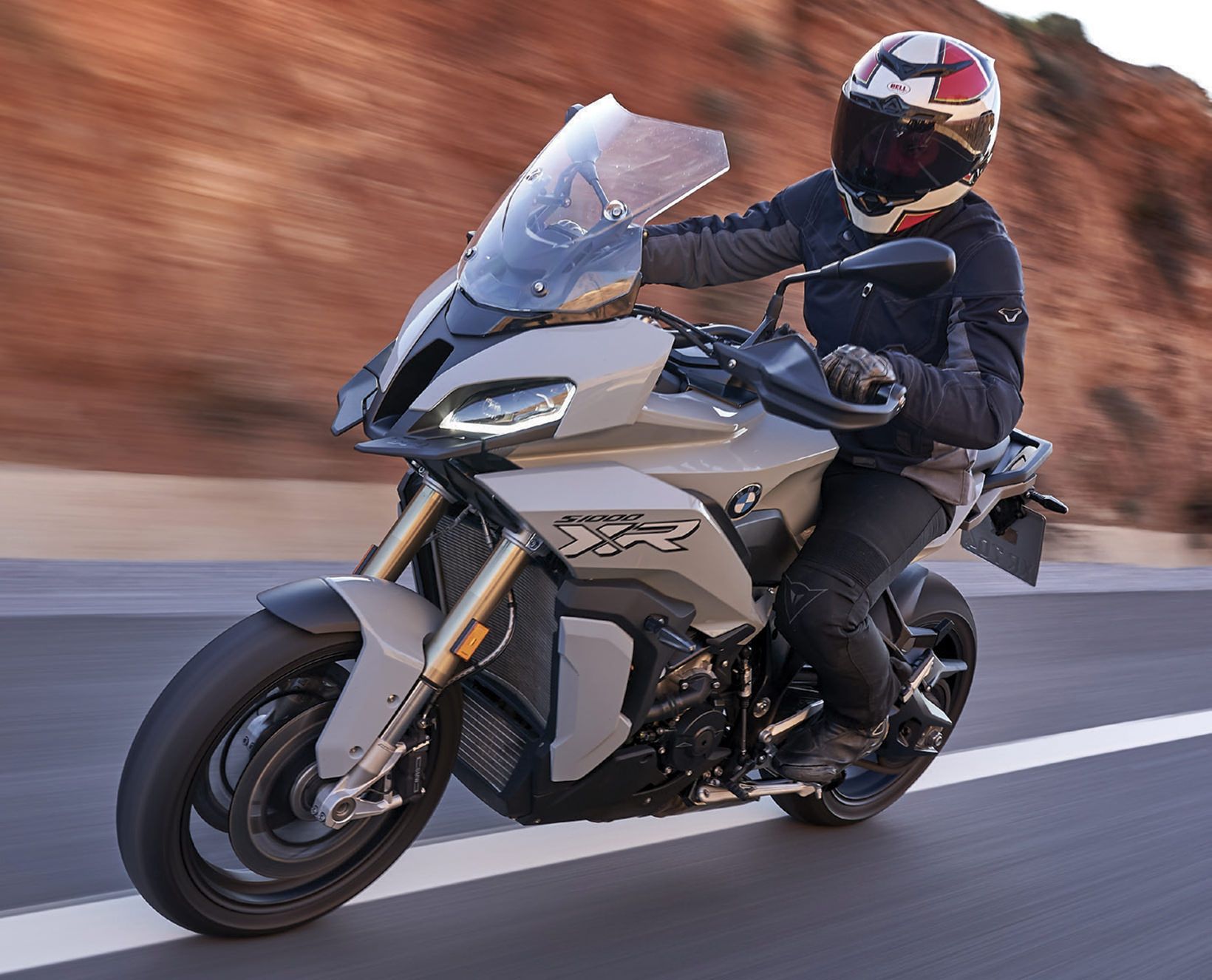 Stretch its legs and it all just starts to make perfect, practical and high-performance sense.

Again, he’s dead right. The XR builds momentum at a hell of a rate and it’s really fun, its induction howl addictive. The BMW-supplied dyno charts say that the XR produces more torque than the Superbike up until about 5000rpm when the RR takes over, before the XR slips marginally ahead again between 7500 and its 114Nm peak at 9250rpm. The power curves are remarkably similar, except where the XR’s line stops at its 121kW (165hp) peak at 11,000rpm, the RR’s power curve just keeps on climbing.

I’m in Dynamic mode of the four selectable maps (there’s Rain, Road, Dynamic and the customisable Dynamic Pro), which basically gives me optimal throttle response and medium to minimum electronic intervention. Dynamic Pro completely deactivates a few of the rider aids, while Rain and Road tends to take a bit of the fun and feel out of what was a clear and sunny day in the south of Spain.

The new chassis is lighter and narrower directly below the seat which gives you a more intimate feeling of what the motorcycle is doing underneath you. BMW says it was going for more front-wheel orientated ergonomics which, when coupled with the wide handlebar, the ‘smarter than we’ll ever be’ dynamic suspension and a package 10kg lighter than the competent model it replaces, it goes a long way to explaining why the thing feels so damn precise through corners. It explains why the XR gives you the confidence to use more of the road and, honestly, why you’re willing to leave a little less in reserve than you normally would. It’s just so damn capable. 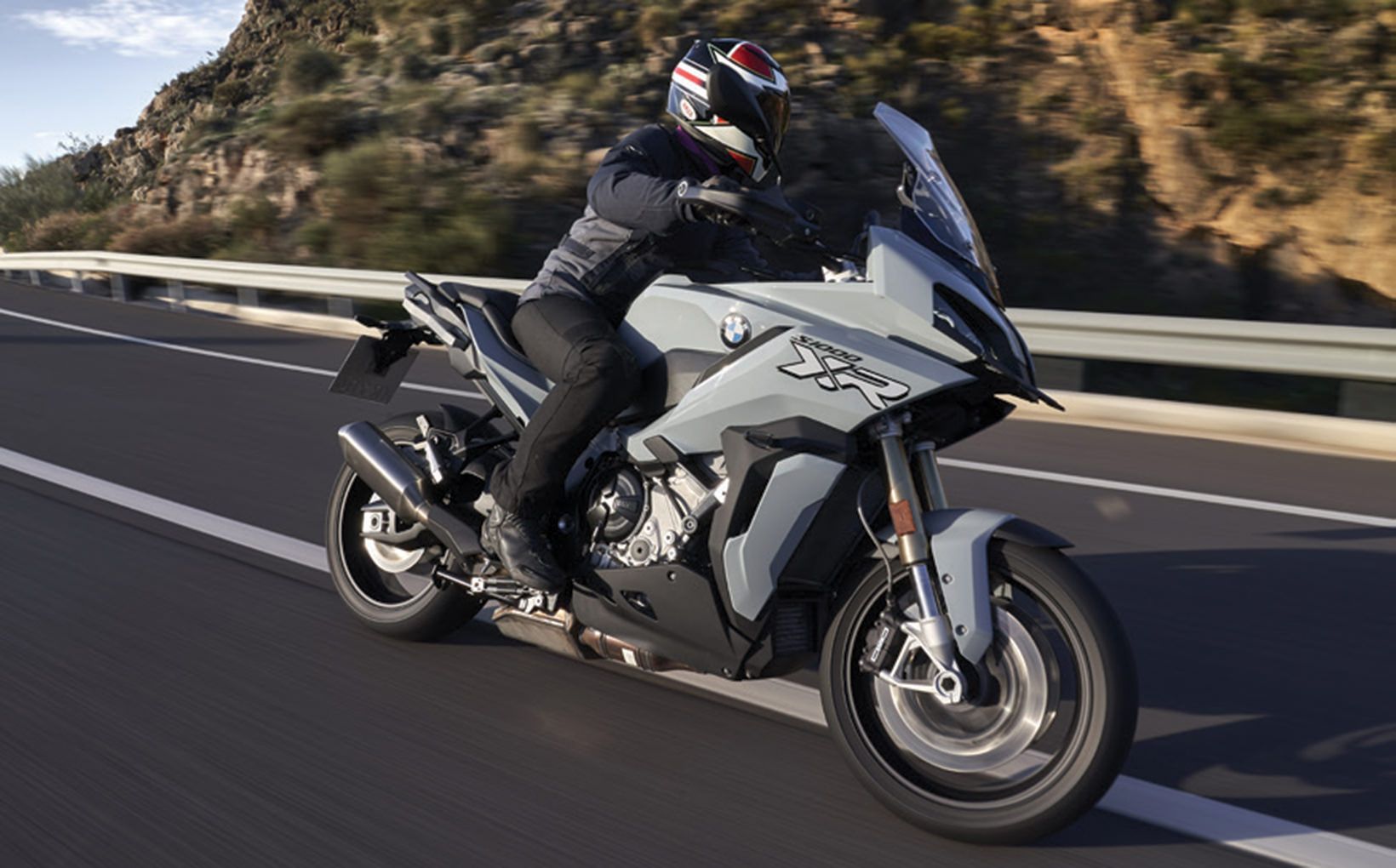 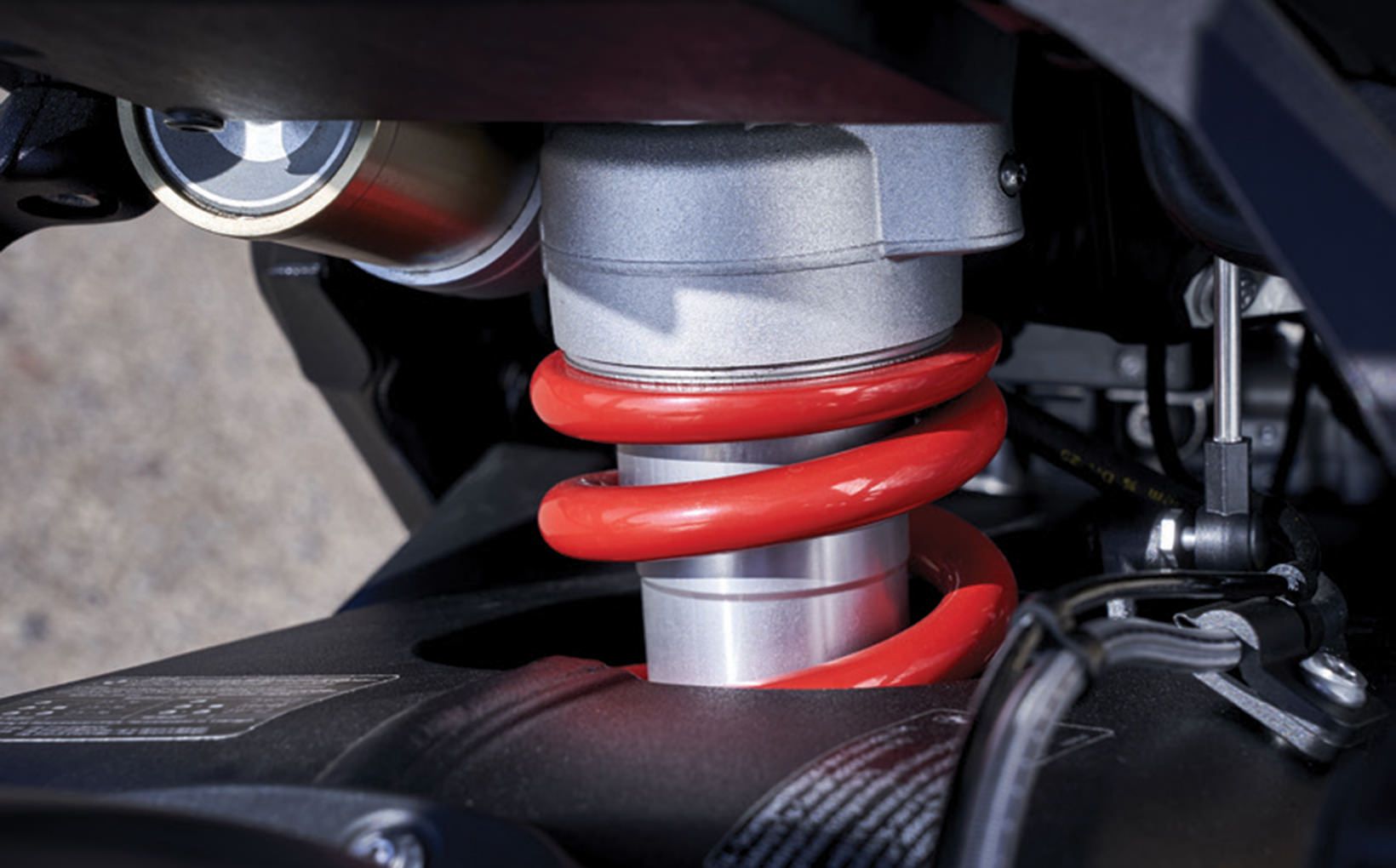 The bike boasts the firm’s latest electronic suspension package, too. Pre-set specifically for the environment in which the XR will most likely be used, it now makes more calculations more often as you’re booting or tooling along and, while my test bike was fitted with the optional Dynamic ESA Pro plug-in, which allowed me to choose between Road or Dynamic modes (and adds automatic load compensation), the standard setting was faultless for my day of fast, luggage-less touring.

The once-optional ABS Pro is now fitted as standard on the XR for the first time, upping its braking game. The BMW-branded four-piston radial calipers offer bang-on bite and spot-on feel, and the six-axis IMU-actuated cornering braking means you can trail brake as deep into a corner as you’re comfortable. I like to drag the rear brake through really tight corners for stability, but I found it was more out of habit than necessity on the XR, even on the unfamiliar roads. The wheelbase is slightly longer and the trail slightly reduced, which probably helps here.

It gets Dynamic Brake Control (DBC) for the first time, too, which detects an emergency braking scenario and basically pitches in and give you a hand. A useful piece of tech that’s great for your head but one, thankfully, I didn’t get to test. Though, physically, it’s a big motorcycle, so I’d welcome the assistance if I was loaded up with luggage and/or a pillion.

Although I could get on it and lift the 226kg (ready-to-ride) off its stand relatively easily with the standard-height seat, I opted for the low option, which added a bit of confidence in an otherwise unfamiliar environment. Standard height is 840mm, which is normally okay for my little legs, but because the seat itself is relatively wide, I opted for the Low (820mm) option. There’s also a Comfort option at 850mm, as well as a High option at 860mm. 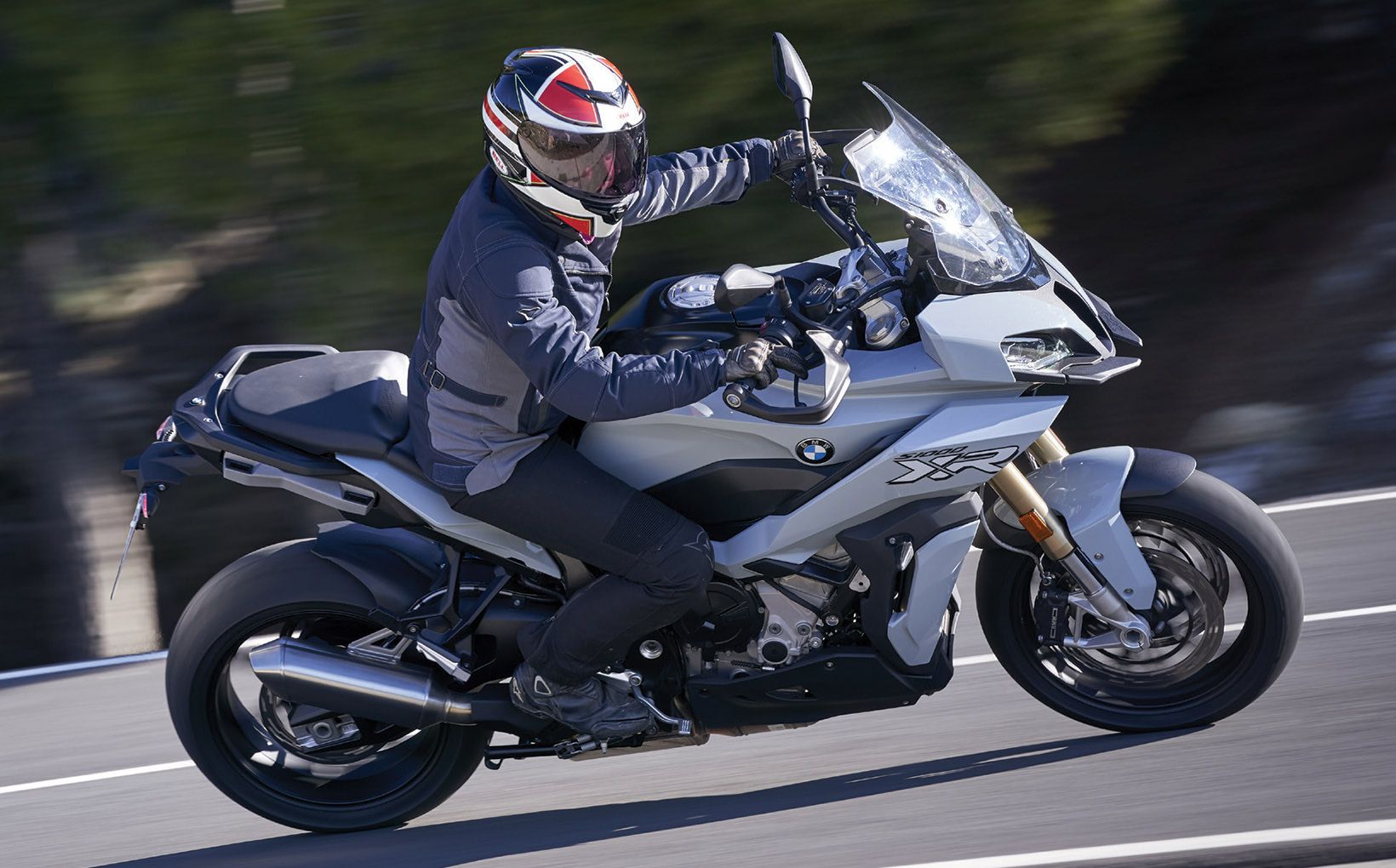 Confidence is something the XR willingly dishes out to you, though. Through its aforementioned capabilities, through its natural and instinctual ergonomics and through its big bag of electronic gadgetry. Whether it’s the really practical stuff like cornering lights, DBC and hill-start assist, or the erring-on-showy stuff like the current and maximum lean-angle readouts, the new power wheelie function (yes, really) or the maximum deceleration displayed in metres per second, it all adds up to a decision-making brain when, used correctly, is probably smarter than you and I are ever going to be.

But for me, the most cunning thing about all of these small improvements is the way they add up to create a modern tech-savvy superbike that you can ride all day, and all week, long. You can mope along breathing in the scenery or you can get your Tom Sykes on and blur the scenery as you propel yourself from apex to apex in a controlled and comfortable way.

Pricing hadn’t been announced as AMCN went to print, and BMW Australia – which tends to tailor the standard and optional feature lists specifically to our unique Australian and New Zealand audience – hadn’t revealed exactly what specification the bike will lob with when it lands in Aussie showrooms in the middle of the year.

Though I am intrigued as to where BMW will place it in the market compared to its new and oh-so able F 900 XR, I’m probably more interested to see if this heavily revised version is enough to finally capture the hearts of Aussie buyers.

Cos it deserves to. 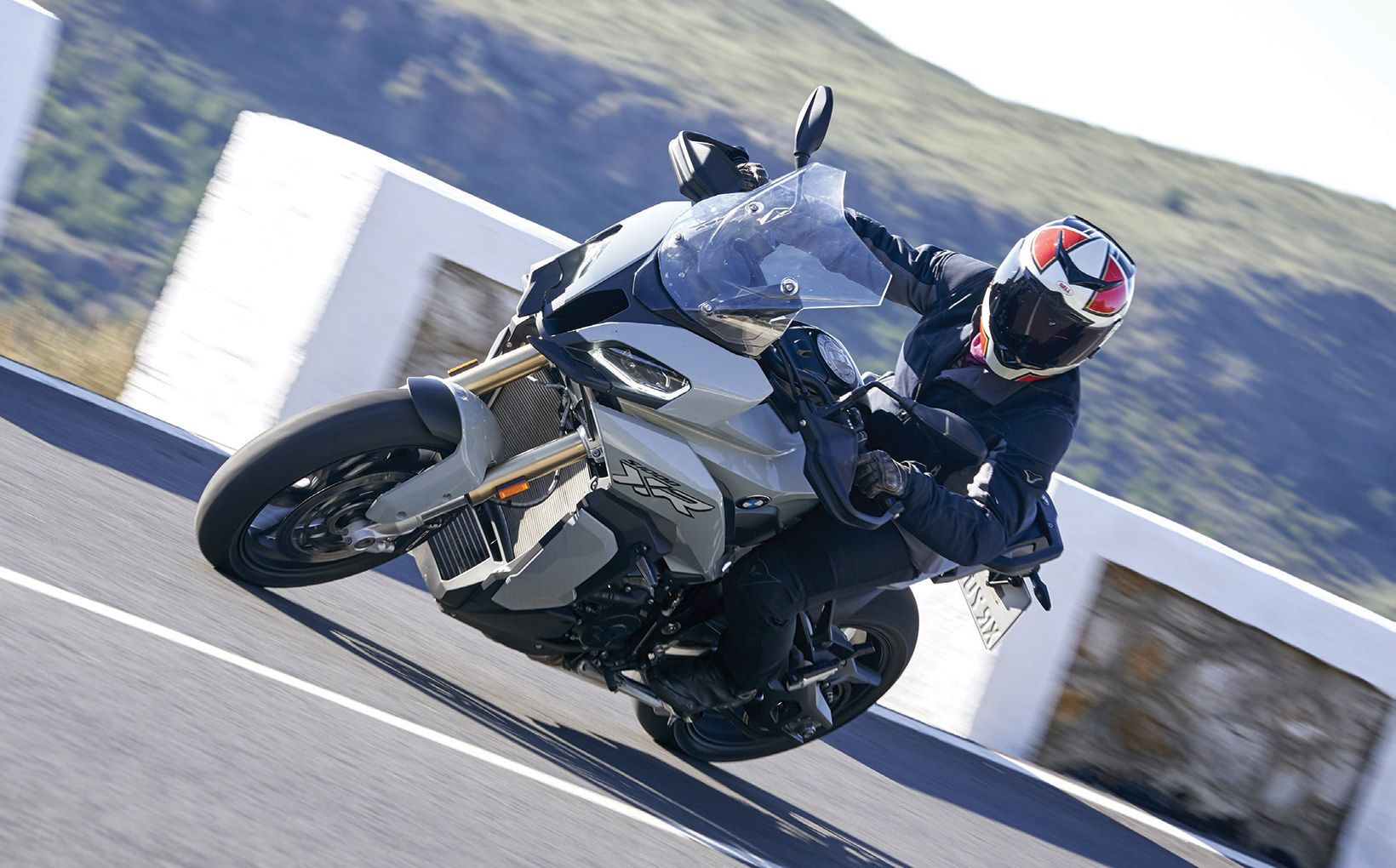