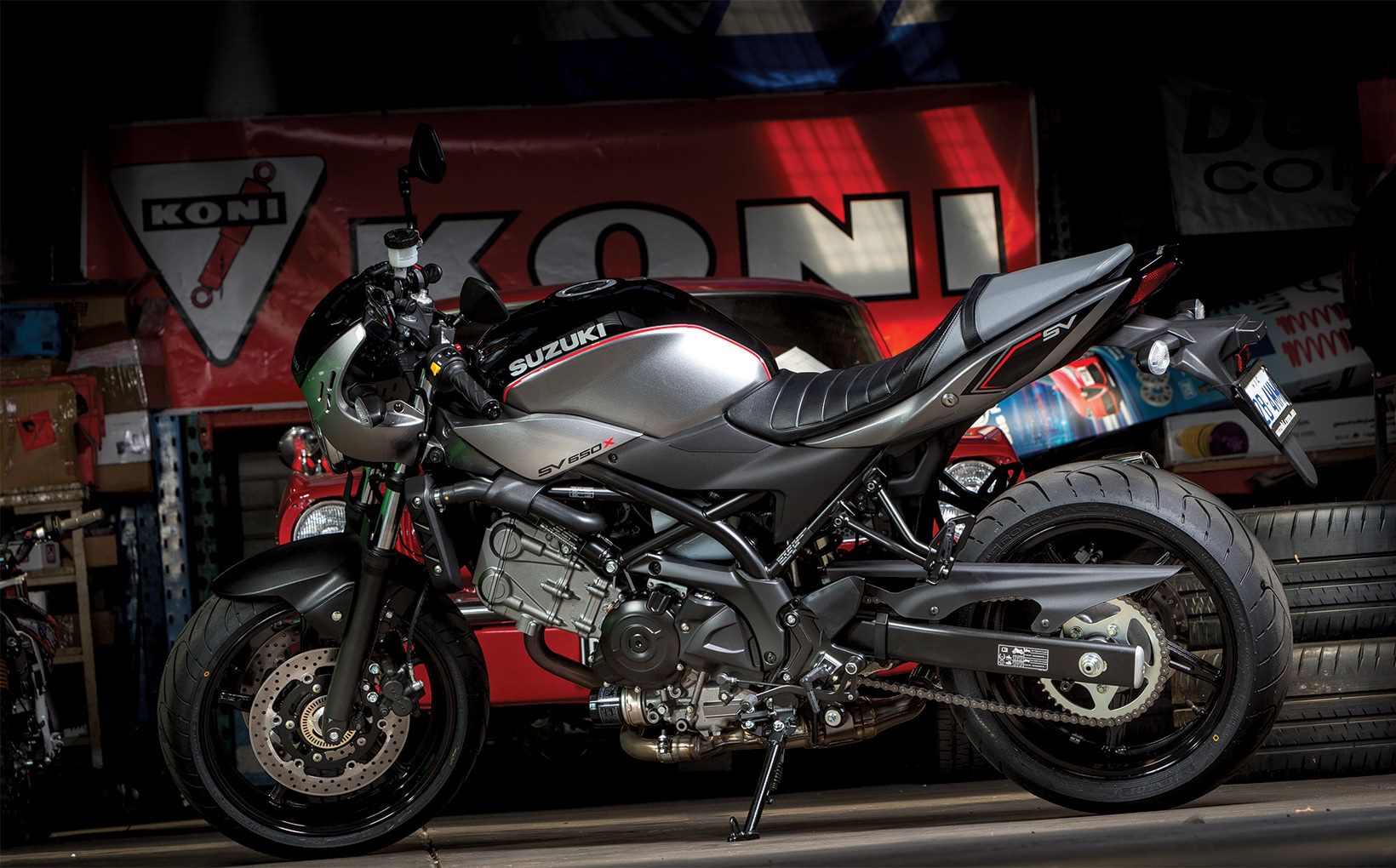 If you are in the market for a motorcycle that boasts an extra bit of pizazz – that wow factor – then it’s generally the European brands that will accommodate. The Euros have a flair that the Japanese can’t often match; they add personality to their machines virtually every time. Sure, the big four Japanese brands make reliable and well-made bikes that perform great, but they tend to lack that something. Bikes like a KTM, Ducati or Aprilia just have that ‘I want to own you’ feel. What chance do the Japanese have?

They have been trying, upping their efforts in the quest to build more than just the perfect motorcycle. In Suzuki’s case, it has achieved brilliant results from a platform that started life at the turn of the century. 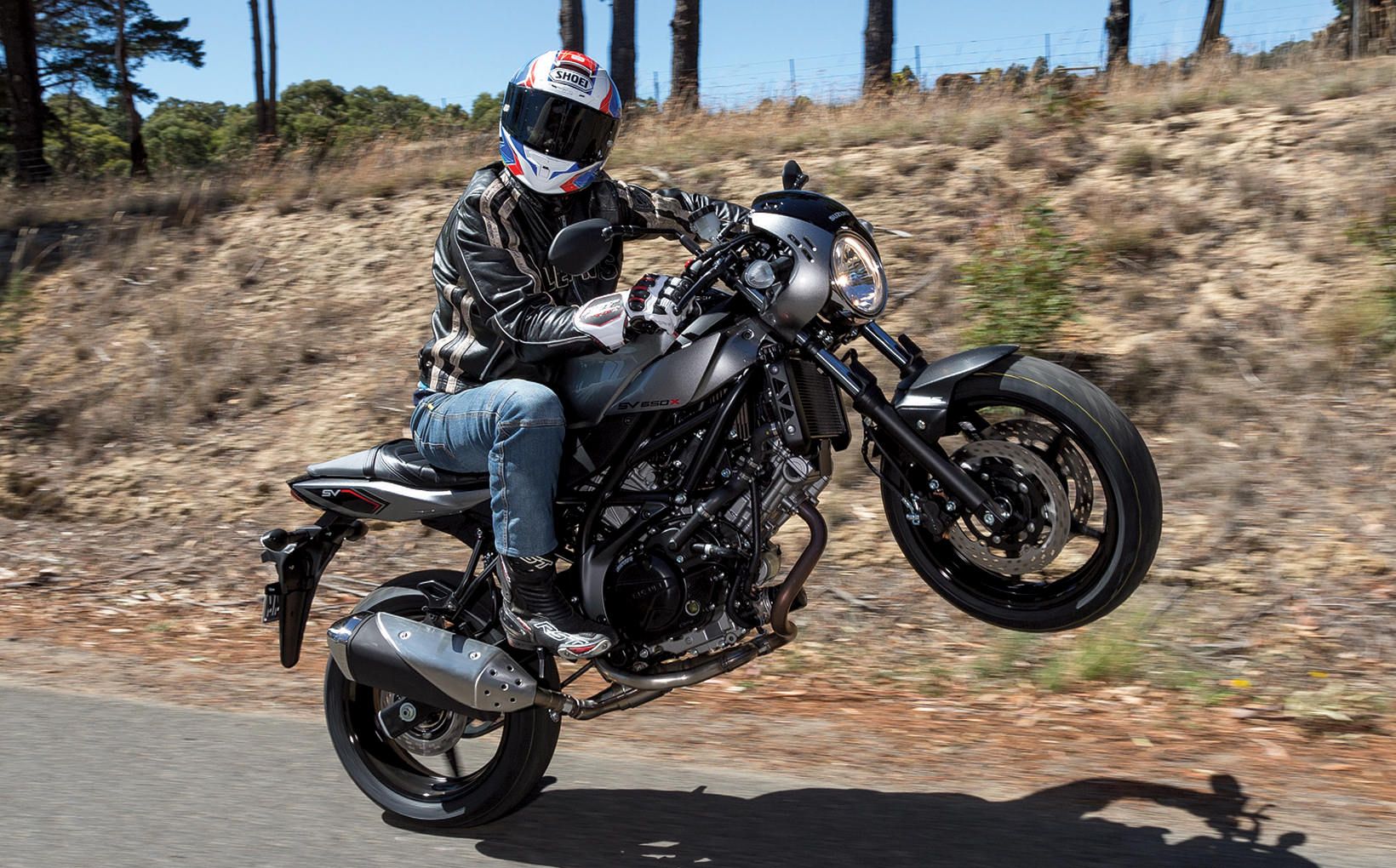 The new-for-2018 SV650X is far, far away from the original and very capable SV650 released back in 1999 and, although the basic layout remains similar in theory, this new X is so much more than a ’99 model with a set of clip-ons.

The X benefits from years of tweaks and modifications that came to a head in 2017 when Suzuki released the most sophisticated and modern version of the 645cc V-twin engine yet, and even it has been improved for the X version.

The naked hipster theme seems to be the way a lot of manufacturers are heading with their development, but I can tell you now that it’s not only the younger bearded trendsetters who will be attracted to these machines.

Left: Rudimentary on paper, the running gear on the SV650X is well and truly up to the task Right: The tuck-and-roll seat is the styling cue which makes the design of the bike so convincing

Let’s start with the engine because it’s a big part of Suzuki’s soul-giving formula. It not only delivers power so the wheels spin, but it’s got beat. That’s right, beat. It’s a term Suzuki uses to describe the soul of the SV, an engine that’s designed make you smile, sound throaty and feel meaty.

With a displacement of 645cc and a compression ratio of 11.2:1, Suzuki were able to substantially modify the internals of the 90-degree engine to gain not only much better fuel economy than the older version but increase both top-end and usable real-world power.

These achievements were made possible by a special resin friction coating of the piston, as well as new L-shaped piston rings to provide a better seal to the new-style SCEM (Suzuki Composite Electrochemical Material) plated cylinders. Twin spark-plug heads make the most of the supersealed gasses, helping to get more bang for buck as well as better economy.

The 39mm throttle bodies are high-tech too, with upgraded 10-hole fuel injectors that spray a finer mist than the older version. There are a set of secondary butterflies, which are controlled by the ECU and help the SV perform some of its hidden tricks – like the Low-RPM Assist function that takes information from the clutch switch and tells the secondary butterflies to open a little just before take-off.

The butterflies also get a workout when you hit the starter with Suzuki’s one-touch starter system. Thumb the starter, immediately let it go and the system will engage the starter motor for the right amount of time to ignite the fuel. There’s an improvement in the reliability of not only the starter motor but the electrical system too, by using them for the minimal time needed.

Left: The steel-trellis chassis is a new design for this third-generation SV650 Right: This would have been a state-of-the-art unit not that long ago. Now it blends into its retro surroundings just perfectly

All in all, 60 different components were changed on the new-spec engine, all in the aid of meeting the Euro4 emission standards while at the same time ensuring that this engine platform stays with us for a long time into the future.

Like most modern bikes, there’s a catalytic converter fitted inside the pipe keeping the underside less bulky-looking, but still helping in the fight for clean emissions.

With a maximum power of 56kW (75hp) and peak torque of 64Nm, this Suzuki has a nice set of numbers. The engine package is sweet and it will chug along all day in fifth or sixth gears, or if things get serious click it down a gear, rev it and away you go.

The backbone of the X is its steel-trellis frame, designed to look retro, but that’s where the retro stops. It is built for functionality and that means for the highways, backstreets and city roads. It’s not built to get around a racetrack the fastest, which means comfort has been built into its design. Steel frames are generally more compliant than their alloy equivalents, so in this case it absorbs the ride better. Its geometry is relaxed, making it both stable and predictable.

Because it is available in both full-powered and LAMS-approved versions, Suzuki needed to cater to a wide range of rider sizes and, between a narrow girth and a very accessible 790mm-high seat, it has succeeded. The reach to the ’bars isn’t too extreme, even though it has clip-ons, and to be fair you don’t feel hunched over.

The LCD digital dash lacks the colour and gizmos of the latest TFT items but if it had a TFT dash the price would significantly increase. 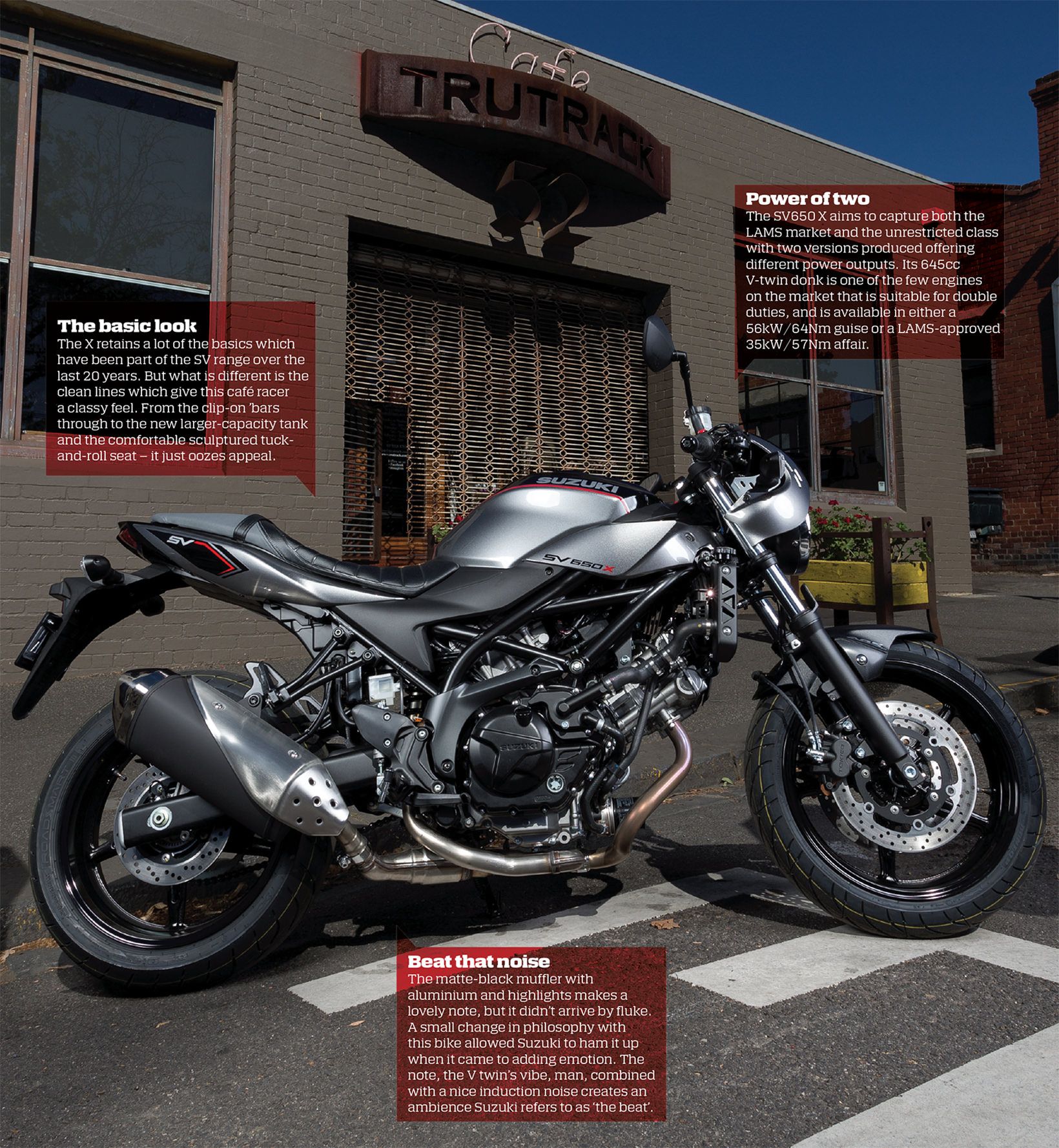 While most bikes at this price point have little to no adjustment, Suzuki has kindly given the owner preload front and rear to play with. It’s a nice option that we didn’t get time to muck around with during the test, but when carrying a load or looking to set the bike up it could come in handy. Especially if you are looking to lower the bike just a tad, by softening the preload front and rear; shorter folk may gain some useful millimetres and at the same time more compliancy. Just be careful not to go too soft, however, because it might wallow and lose its composure.

Sticking with a traditional right-way-up fork helps keep the retro theme alive and the retail price low. Thankfully, the back end is modern with an actuated-link monoshock design. The fork is fine for a bike like this and can help take some rigidity out of the ride compared to the more highly favoured upside-down affair.

The front twin-disc brake set-up with two fourpiston calipers stop the SV well. There’s a single disc at the rear and a two-channel ABS system taking care of you in the background. They aren’t the top Brembo items as found on the GSX-R1000 but don’t need to be. For road use they do the trick.

The X is available in only one Katana-esque colour scheme, but that doesn’t mean it’s not a bike for everybody. There’s a LAMS-approved version that has its power reduced to 35kw (46hp). 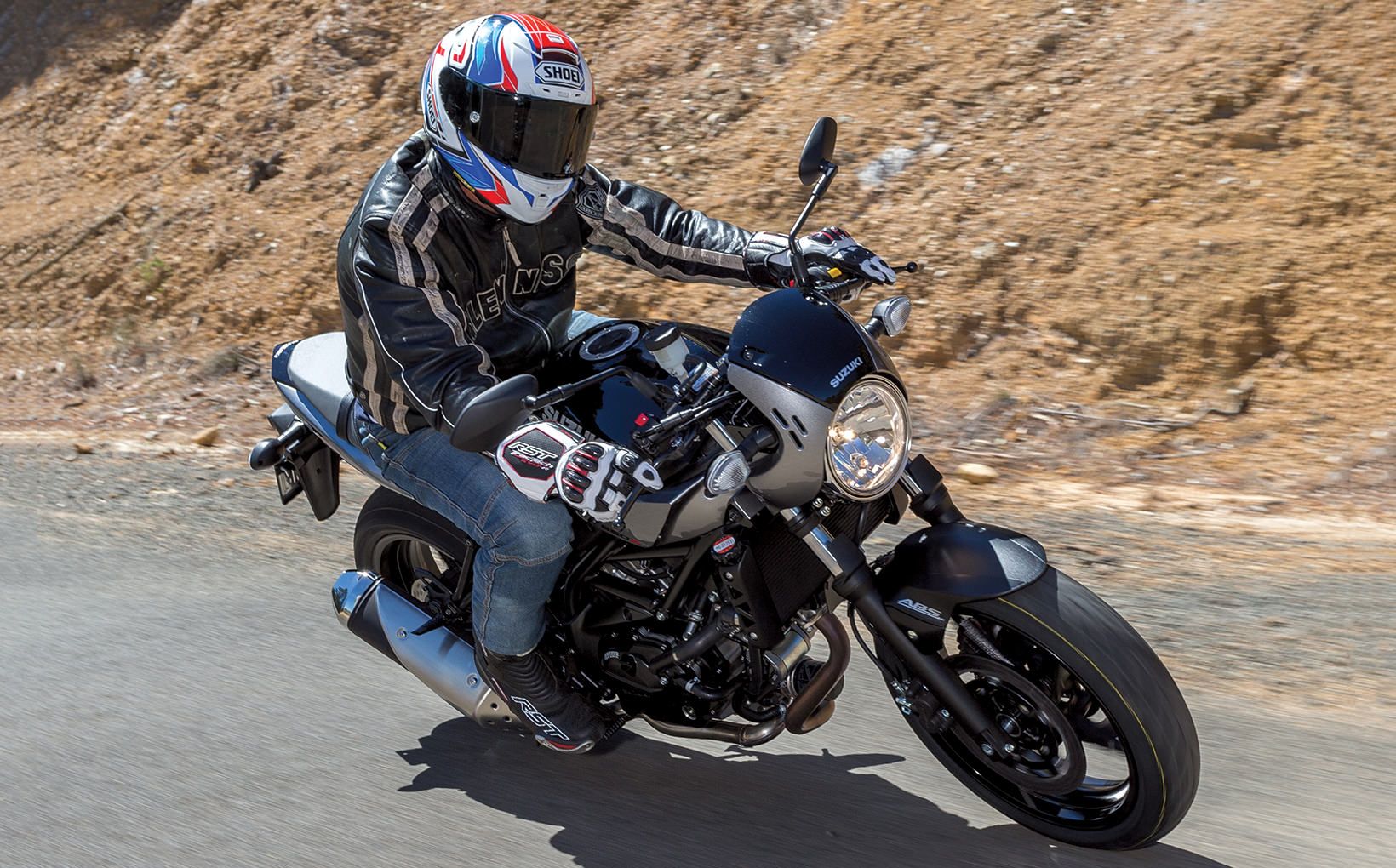 I tested both versions during the launch ride and in all honesty, unless you want to do a wheelie, it’s hard to discern between the two. Around town they both feel similar and it’s not until you really get up it that you can feel the difference. I could quite happily own the LAMS model even with an unrestricted licence.

Suzuki predicts 85 per cent of sales will be fully powered models, leaving just 15 per cent LAMSapproved. And if the X isn’t up your alley but you love the brand, there’s a bevvy of LAMS-approved Suzuki models to choose from.

Whether in its original SV650 form, the preceding SFV650 Gladius or the newly launched SV650, Suzuki’s 90-degree V-twin 650 has always been a versatile and user-friendly engine, and the X is no different. It has a very usable and predictable power delivery, an endearing characteristic that extends to both models.

The bike handled the traffic with ease, even with the clip-ons, and I was expecting to get a sore neck around town, but it never eventuated. The positioning of the ’bars, for me at least, was spot on. 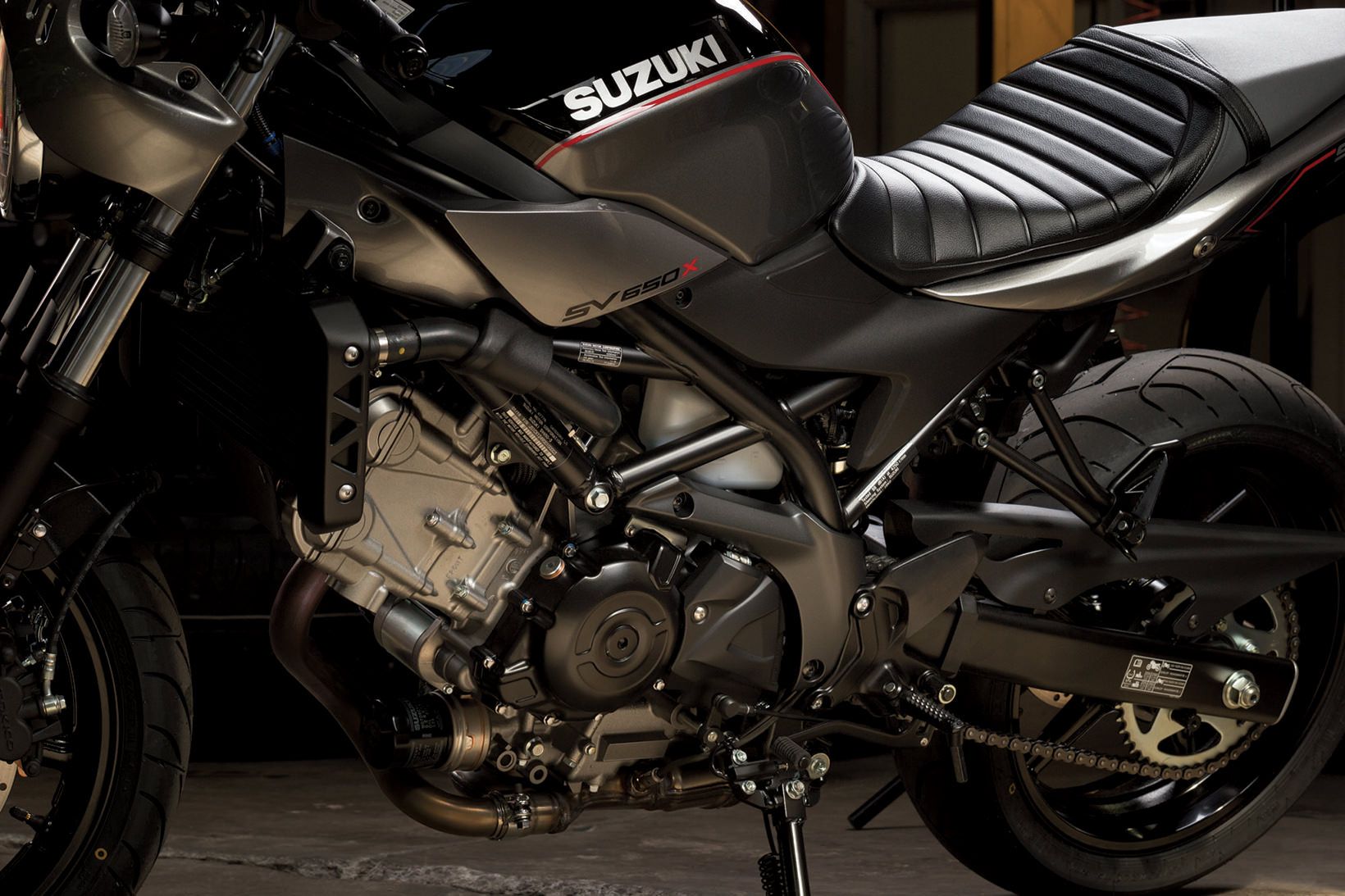 The SV650X oozes appeal, especially when you get up close and personal.

The rest of the ergonomics were great too. I never felt cramped, even on freeway stretches, where you start to notice those little niggles. The tuck-and-roll seat looks cool but is perhaps slightly under-foamed compared to a top-level item, though this is something an owner would get used to very quickly.

The bike is a gem to ride. It holds its line, it goes exactly where it’s pointed, and the trellis-style frame, together with the adequate suspension package, offers plush and planted stability. Tyres are top-quality Dunlop Roadsmart 3 affairs that contibute to all the good attributes the SV offers.

The LCD dash gives you all the expected information – two trip meters, clock and so forth – but the most important stuff, the stuff that counts, is a fuel gauge and range-to-empty, and they are there to enable you to keep on top of fuel stops with confidence.

Speaking of fuel, we covered a couple of hundred clicks without even considering fuel; more than 300km from a full tank is highly probable.

Left: The exhaust note is great from standard, deep and throaty Right: The ABS on a bike of this capacity is now a type approval requirement in Europe – good thing, too!

The type of customer who buys the SV650X will want to personalise it, and Suzuki has that aspect covered. There are plenty of options to dress your rig with bling, such as pipes from Yoshimura, slider kits and even tank pads.

And if you want to do a bit of touring, there’s a textile tank bag option or a 27-litre top box that mounts behind the pillion seat.

Suzuki has created a machine that performs well, meets all necessary emission standards and is very appealing to a broad spectrum of riders. The SV650 motor has always been one of my favourites and, with the new mods introduced to this latest generation, it continues to be.

The bike oozes appeal, especially when you get up close and personal with it, and that is something the Japanese have only been able to achieve a few times before.

Most importantly, under all the soul and good looks, it’s a thoroughly modern motorcycle that behaves in a modern way.