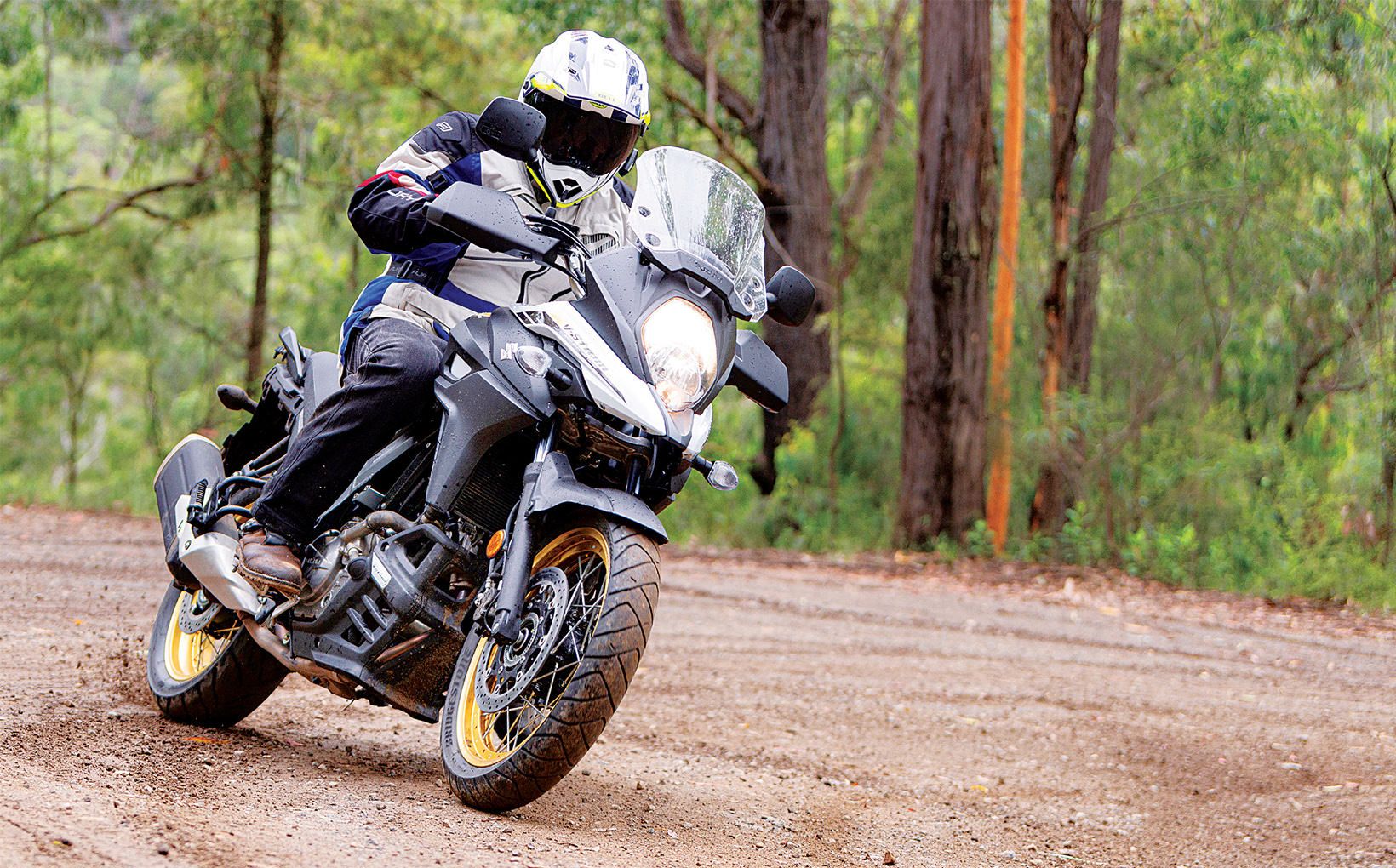 Many of us love the latest gadgets – they can make life easier, and in the case of adventure bikes festooned with electronics, often safer and easier to use.

But, like jetting off from the big smoke to go camping, it’s nice to get back to basics and riding Suzuki’s V-Strom 650XT is like that. There’s no waiting for a TFT dash to load, there’s no online diploma needed to work out how to change modes and, compared to most of the current crop of adventure bikes, your bank balance will look a hell of a lot heathier, too.

When we got our paws on the V-Strom, the only bike in the test fleet that vaguely resembled an adventure bike was the 2021 Beta 390 RR Enduro that Wattie tested in AMCN Vol 70 No 21.

The plan was to take both into the bush and see just how deep into the scrub you can realistically push a standard V-Strom 650 on road-bias tyres.

It was a good plan, a simple plan and one sure to highlight the ’Strom’s off-road limitations. And the heavy rain that I woke to on the day of our planned ride was set to make it very interesting indeed. I was realistic enough to know that I wouldn’t be scaling rock shelves and tackling five-foot drop-offs on the ’Strom, but it quickly became apparent that while rolling on the factory-fitted Bridgestone Battlax Adventure A40 tyres, anything more than riding clay-based fire trails, and a couple of well-groomed single track in pursuit of Wattie and the knobby-shod Beta was going to end up with damage to the V-Strom and myself. And given the treacherous conditions, it’s a credit to the V-Strom’s agreeable nature that I didn’t end up on my head. 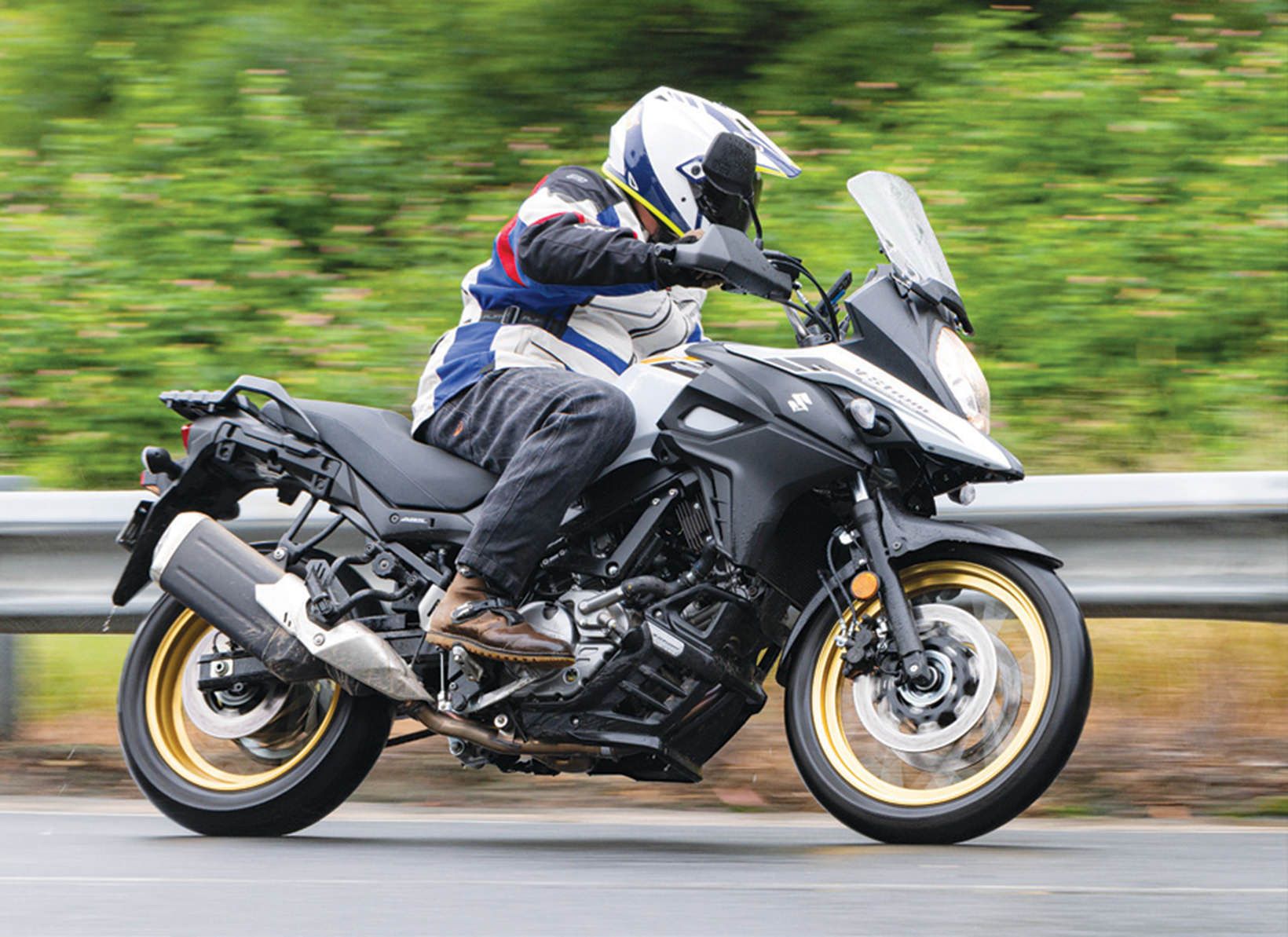 The V-Strom 650XT is right at home on the tar as well as the trails.

The V-Strom 650 has been progressively updated since its release in 2004 but at the heart of the popular mid-capacity adventure bike is its bulletproof V-twin that was first fitted in the SV650 back in 1999. The retuned version of the SV’s 645cc twin has been refined and improved over the years and now produces 52kW of power at 8800rpm and 62Nm of torque at 6500rpm. It’s hardly throat-punching power, but like the 1037cc V-twin powering the V-Strom 1050 – also an evolution of the TL1000 and SV1000 powerplant – it’s lively, raw and, most of all, fun.

It feels and sounds old in a quiet and solid sort of way, lacking the hi-tech paper-thin cylinder walls and cases of modern hi-tech machinery. 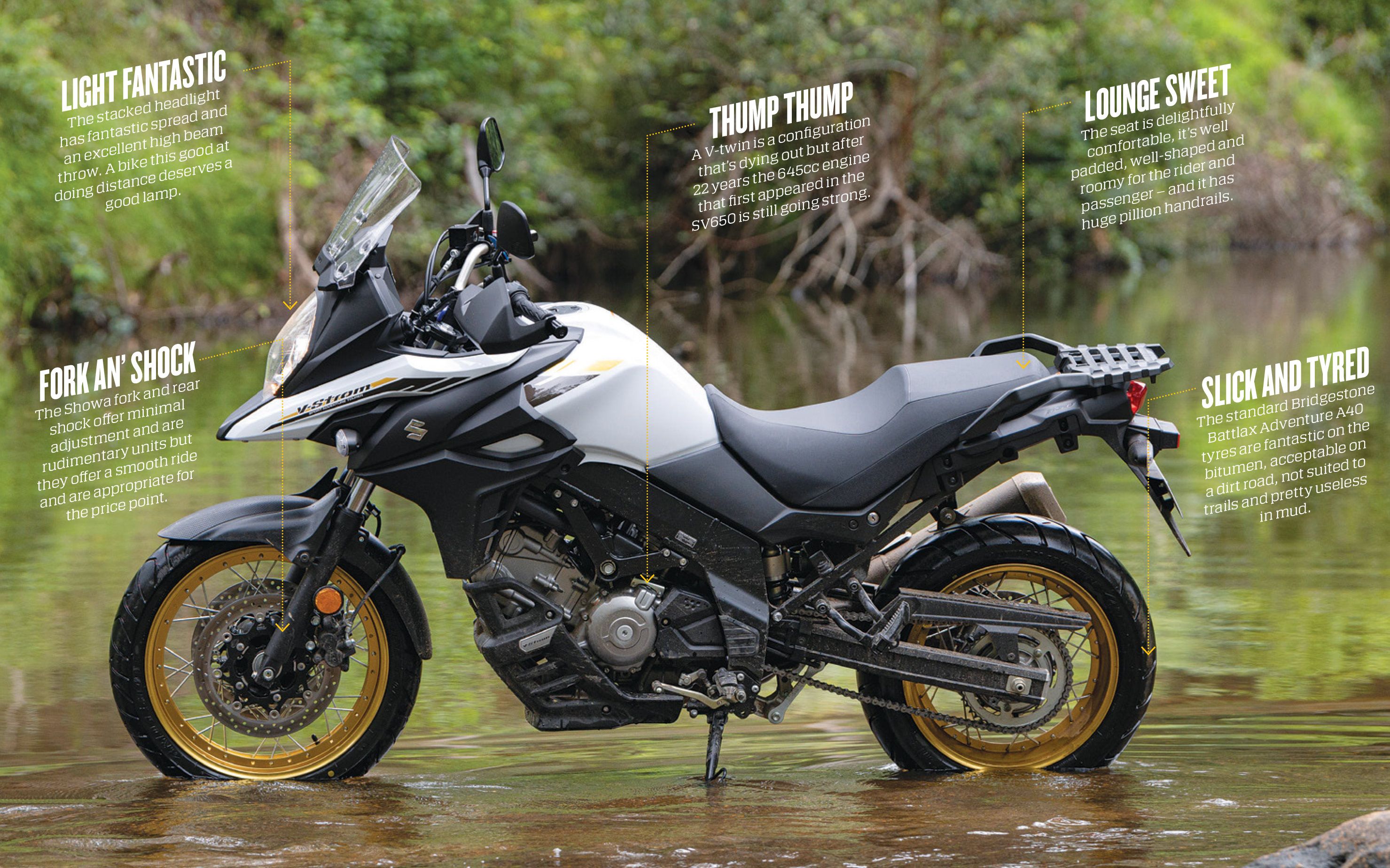 After 23 years it’s still such a great engine, it’ll labour away at two-fifths of bugger all on the analogue tacho, using its torque to motor along, but it’s just as happy with you revving its freckle off attacking corners on the pavement or sliding the rear in the dirt. The versatile, tractable and predictable nature of the V-twin and the stable chassis makes winding it on earlier than you might normally in the loose stuff a comfortable experience, and on sweeping dirt corners the ’Strom had no issues giving the Beta a hurry up.

And in other good news, if you want to thrash the V-Strom like a dusty rug it’ll do this forever as it’s proven to be as reliable as they come, and I’ve heard it said that if there was a nuclear war the only things left would be cockroaches and V-Stroms. 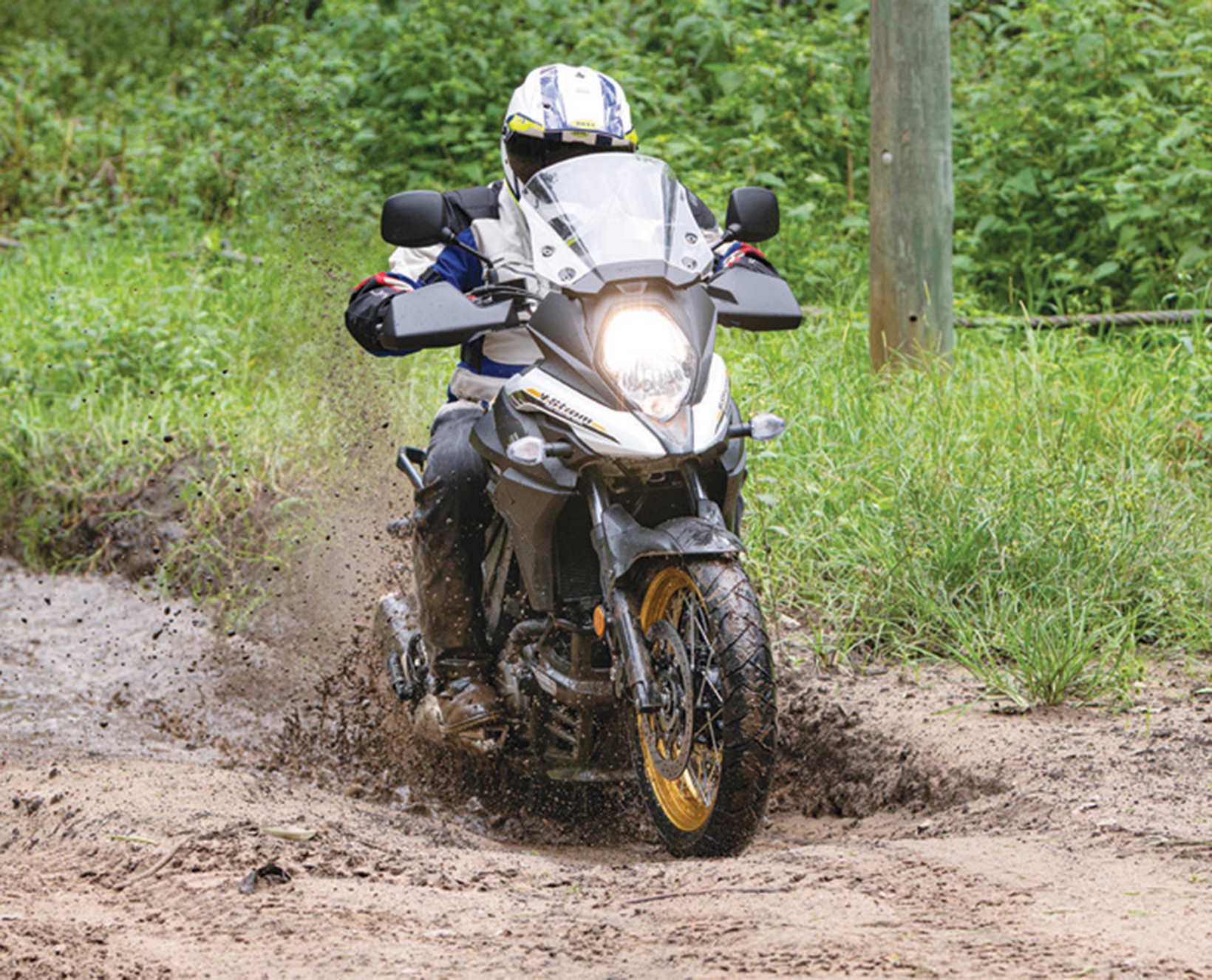 The ’Strom weighs in at a claimed 216kg (wet) which is on the overweight side – consider Yamaha’s Ténéré 700 puts out 2kW more power, six more Nm of torque and weighs a claimed 12kg less. If your priority is dirt, the Ténéré and KTM’s 890 Adventure R will suit you better, but neither is a match for the V-Strom in the comfort stakes.

You sit in the ’Strom rather than on it. The seat height of 835mm isn’t as daunting as many other adventure bikes and it’s well-shaped, well-padded, and very, very comfortable. You can slide off the ’Strom after a full 20-litre tank stint as fresh as a daisy. In addition to the seat, there’s plenty of leg room for my 186cm frame and the reach to the ’bar is comfortable, and the only things that need doing are setting your levers and a tweak of the ’bar to suit your preference. However, off-road, the seating position, which sits you behind the longish tank, makes it difficult to get weight over the front wheel, so it’s the go-to get up off your bum to get the weight on the front and use the rear wheel to steer the bike through dirt corners. 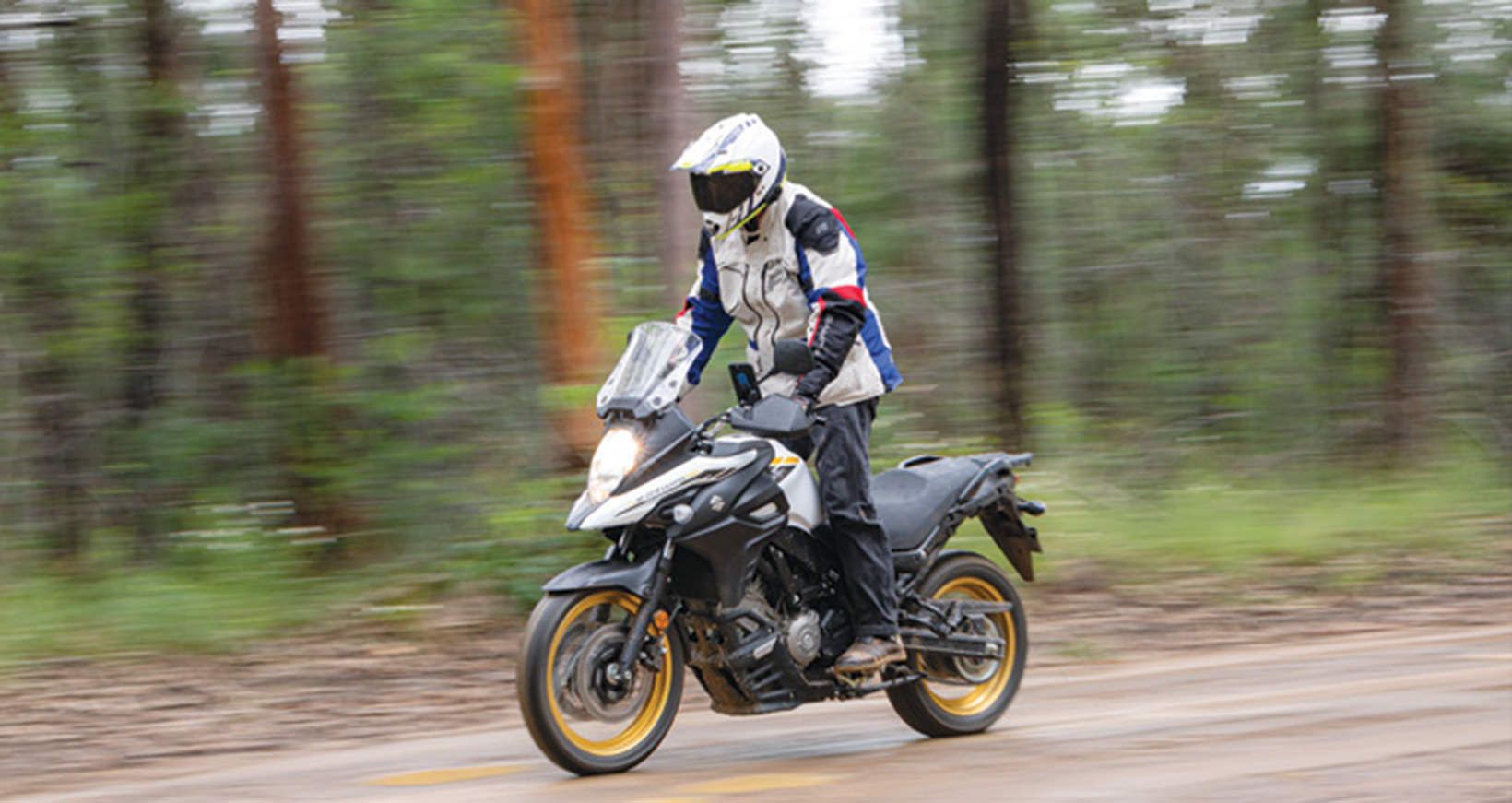 The ’bar is a bit low for extended stand-up dirt riding and you’ll need to ditch the rubber inserts in the ’pegs if it even looks like rain. The rigid twin-spar frame’s large flat surface with additional grippy inserts help maintain grip while you’re on the ’pegs. Despite the V-Strom’s obvious road focus, it feels comfortable and natural to be standing up on the ’pegs.

At my height, buffeting from the screen is abundant and annoying, but I haven’t ridden a current adventure bike that doesn’t do the same – except for BMW’s R 1250 GS – but that has a screen the size of riot-squad shield. Off road, where speeds are slower and you’re often standing, the screen isn’t an issue and, in its size and location, doesn’t have you feeling like you’re going to give it the ol’ Liverpool kiss if things get ugly.

The right-way-up Showa 43mm fork and rear monoshock are old school and low- spec. The front offers preload adjustment only while there’s rebound and preload adjustment on the bum with a remote preload adjuster for your shock-tuning pleasure. With my 105kg on board the rear feels soft and saggy, even with the preload wound on to the stops. The suspension provides a plush and compliant ride on most surfaces if you’re not carrying Dakar pace, but the ’Strom really struggles on corrugated dirt corners which have the front skating all over the place and the rear failing to aid the rear tyre in producing much forward motion. Even on open fire trails where the Strom is in its happy place, the Beta’s superior suspension and knobby tyres leave the Strom for dead if the surface is rough, especially if you insist on sitting down – get up! 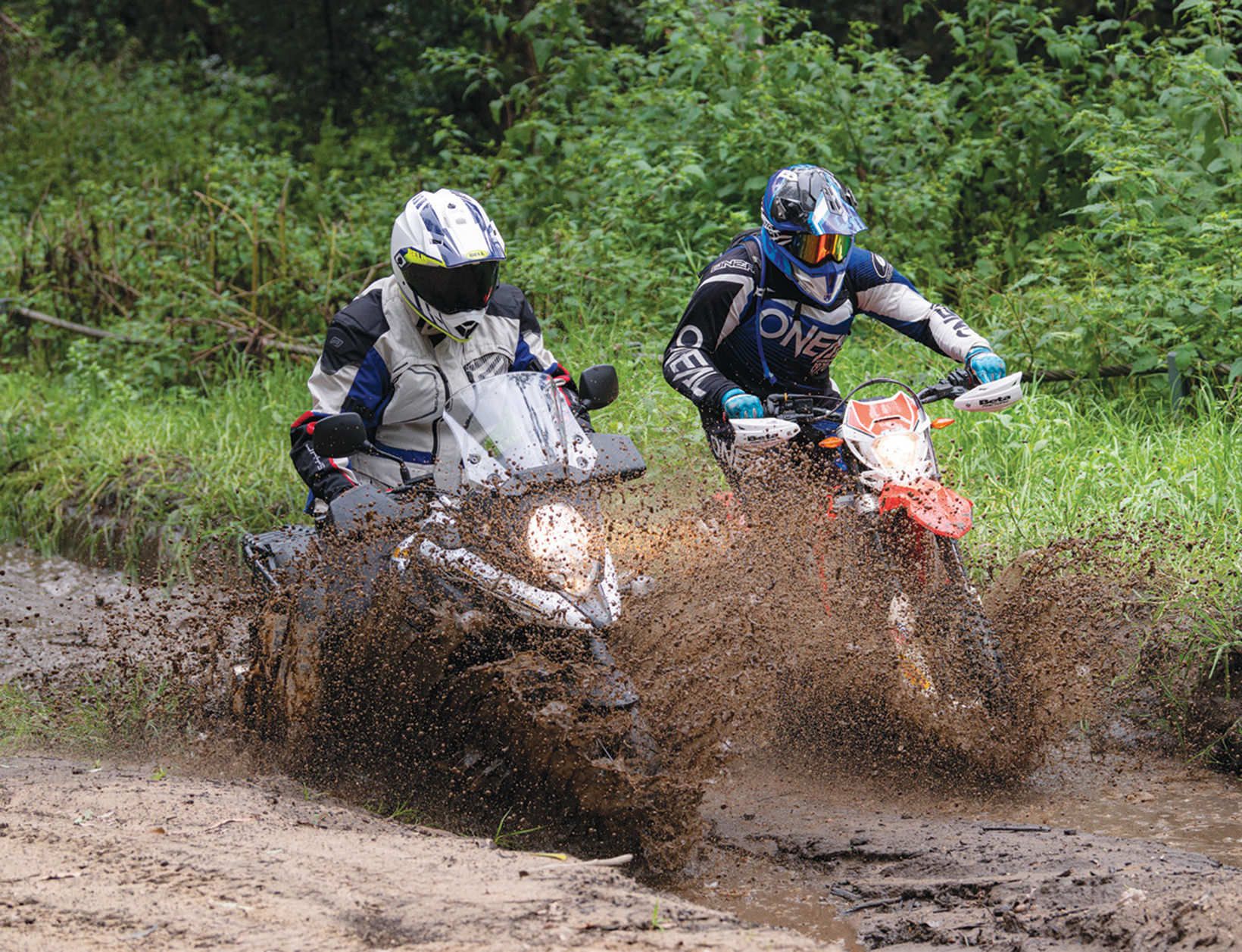 Ground clearance and footpeg height are the biggest hinderances to doing anything too adventurous off-road.

The ’Strom’s plastic engine guard scrapes if you’re picking through rocky sections, and the footpegs get hung up on ruts that aren’t particularly deep. This combined with the less than hi-spec suspension means that you need to keep speeds down if you want to tackle anything really rough.

But the things holding you back the most are the standard Bridgestone tyres. They are fantastic on the road – they offer footpeg scraping grip in the dry and confidence-inspiring grip in the wet, but in the dirt, they offer the grip of an oil-covered thong… and when the dirt turns to mud you may as well be on slicks. 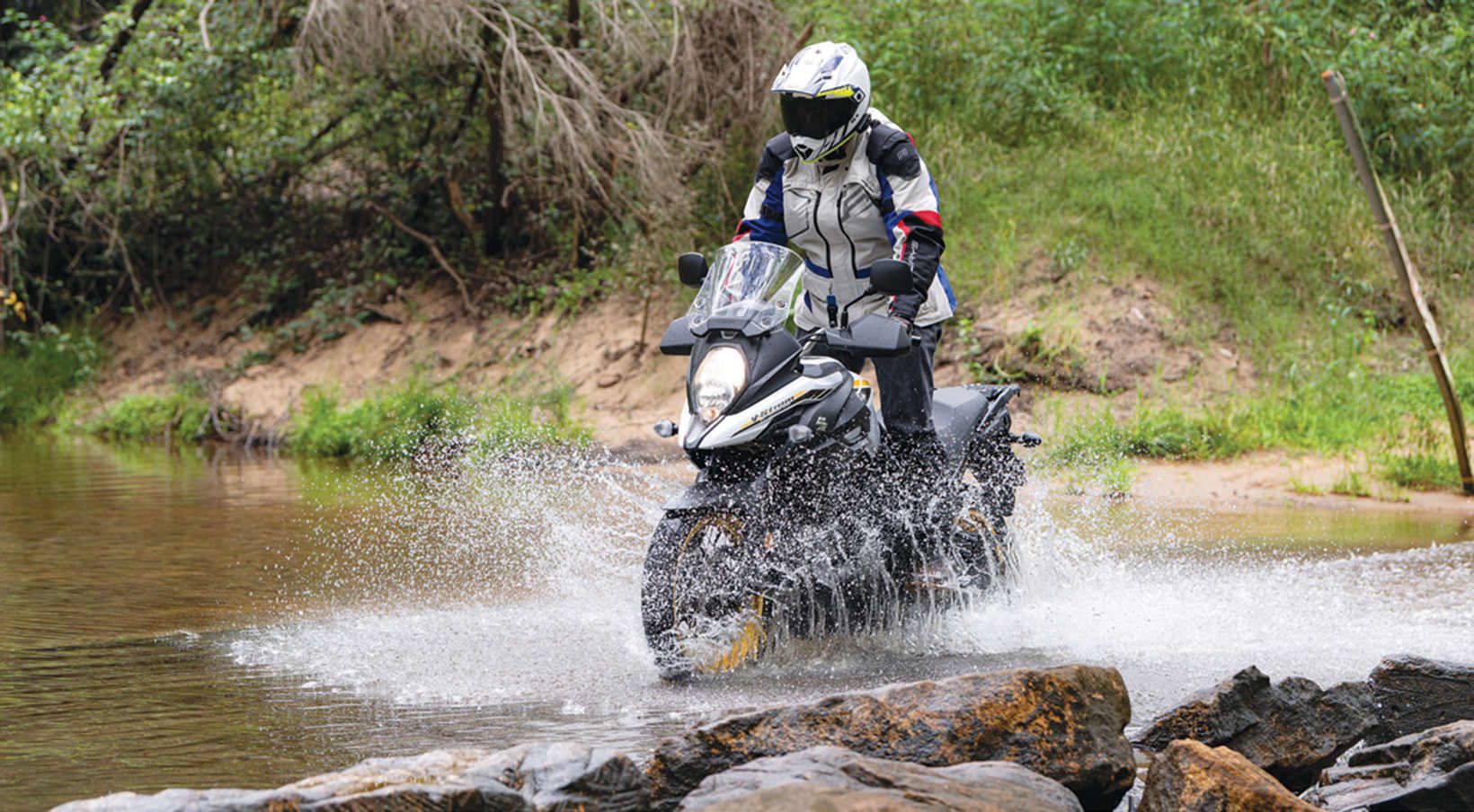 Braking is provided by Tokico up front by way of twin dual-piston calipers, while the rear end is taken care of by Nissin with a single-piston affair. The brakes do the job adequately, but they sure won’t be winning any awards and they’re not exactly cutting edge – but I reckon set of braided lines and a good set of pads would improve them vastly.

You won’t be dazzled these days by the electronics on-board but what is available to you is effective and consummate with the ’Strom’s affordability. The ABS is switchable and works perfectly well on the road and surprisingly well in the mud – although it’s still better with it off.

The Mitsubishi traction control has three levels of adjustment – 2, the most intrusive, 1 and off. Level 1 is subtle enough that you can tackle dirt roads and it won’t impede your progress too much, but level 2 is inappropriate on the dirt, and you’ll just get cranky with the system nicking your wheelspin. With such a tractable engine, perfect fuelling and tactile throttle feel, flicking the traction control off is a joy rather than a worry. 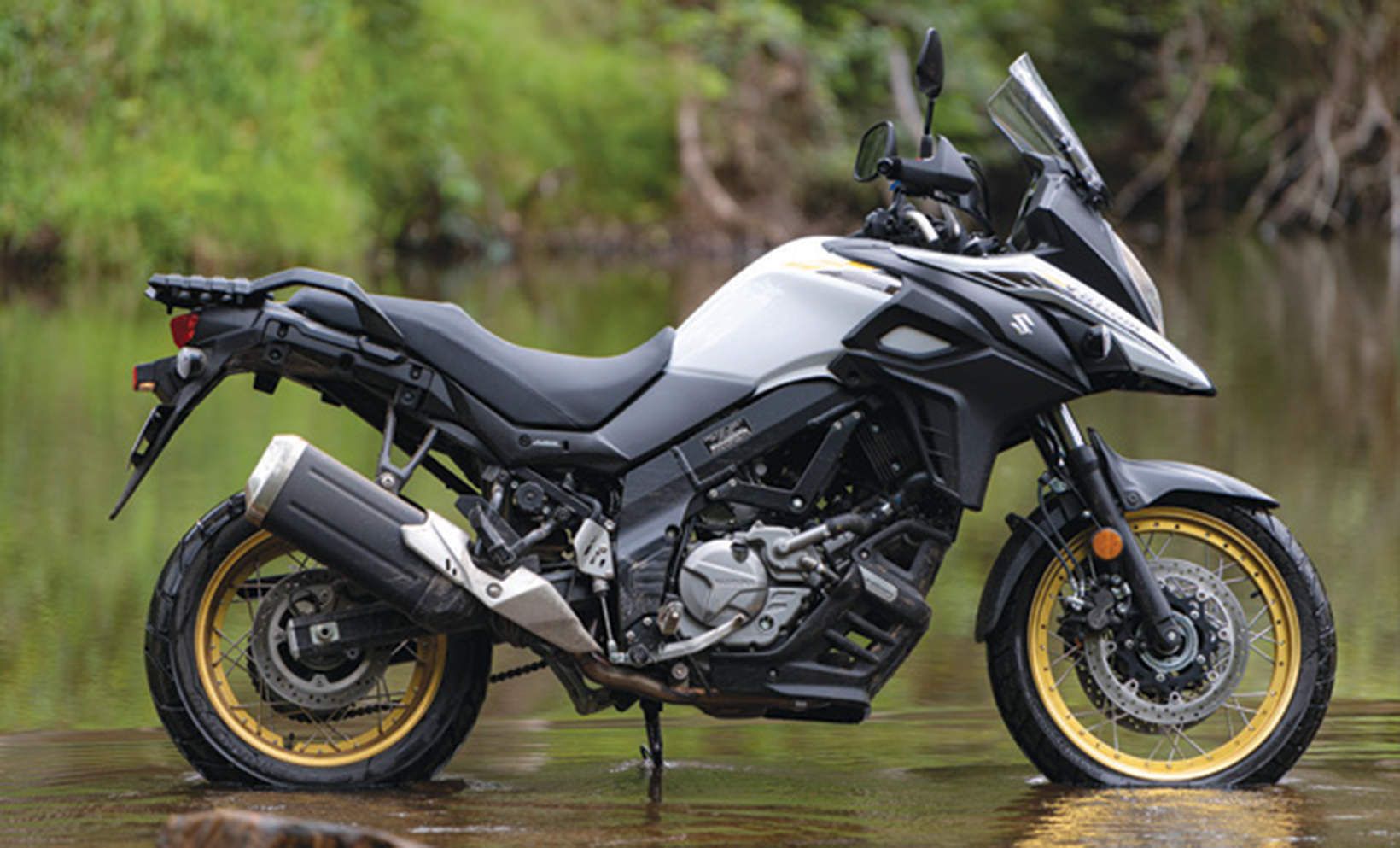 The dash set-up is old school with an analogue tacho, a bunch of idiot lights and an LCD display that gives you speed, temp, time, fuel and much more stuff that’s actually useful – I for one am not bothered if I have to manually check my tyre pressures and you can’t help but think that you’ll be laughing at your mates in a few years when they’re paying mega-buck to fix their bike’s TFT

Like a lot of well-laid plans, mine actually didn’t go to plan, I didn’t get the chance to push the ’Strom into the wilderness, but the slimy conditions highlight the V-Strom’s off-road pros and cons, and the 2000-plus kilometres I put on it gave me a chance to get to know the V-Strom in a variety of settings. Is it an adventure bike or a leggy sports tourer? It’s both and more, it’s a jack of all trades and master of none. 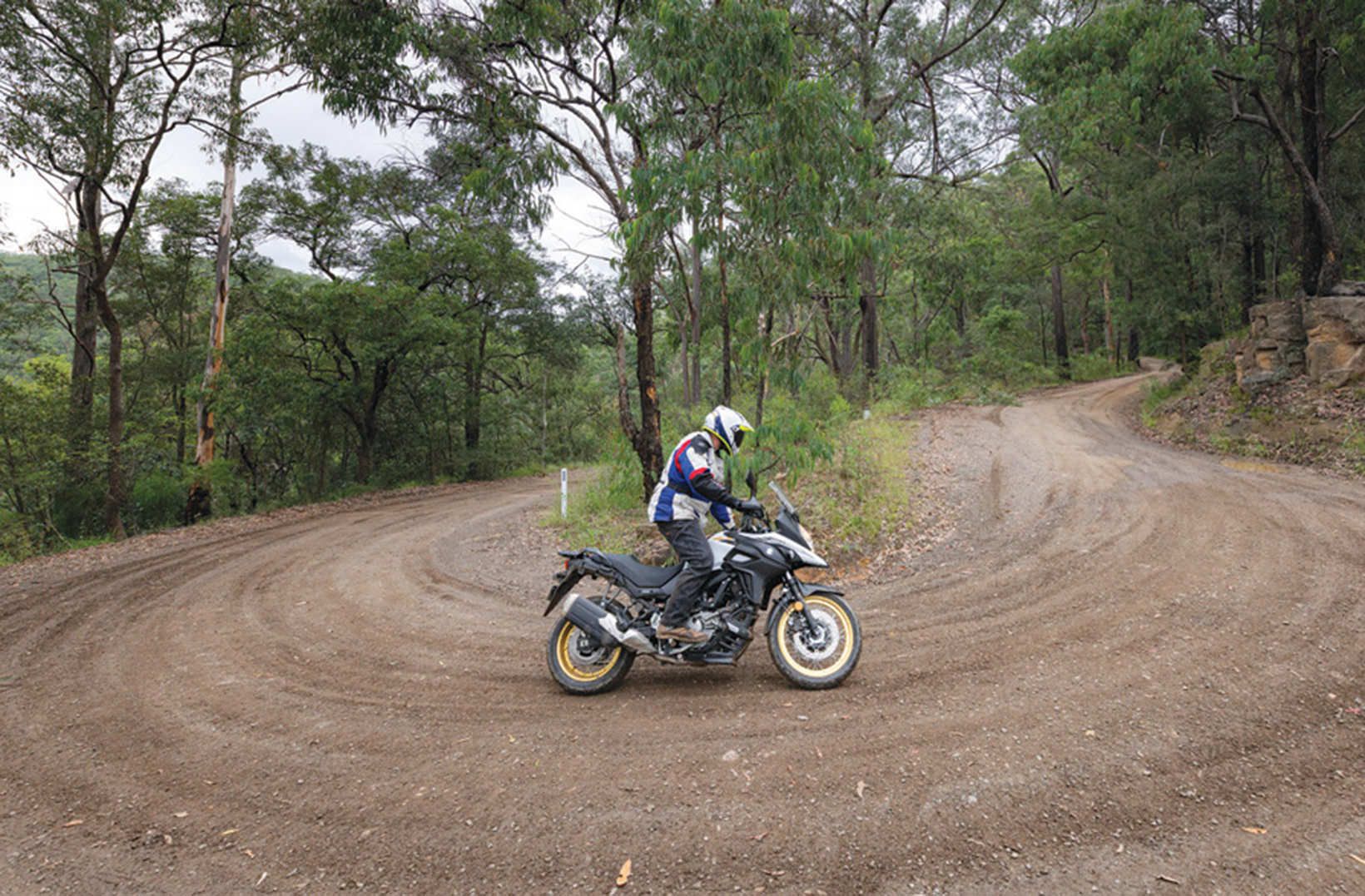 Is it an adventure bike or a leggy sports tourer? It's both and more

The V-Strom isn’t the sharpest weapon in the trunk, especially in comparison to the latest crop of hi-tech adventure bikes, but it’s not trying to be that, and it’s not priced like that. At $14,490 ride away you could buy two V-Strom 650s and get change with the money you’d fork out for a BMW R 1250 GS Adventure.

I’ve met lots of V-Strom 650 owners that are a little fanatical about them and I can see why. The ’Strom might not get you across this big brown land of ours in record time, but it will do it without breaking you or your bank account in rail, hail, shine or even thick mud.

In a world of niche products it’s a true all-rounder; maybe one of the last.